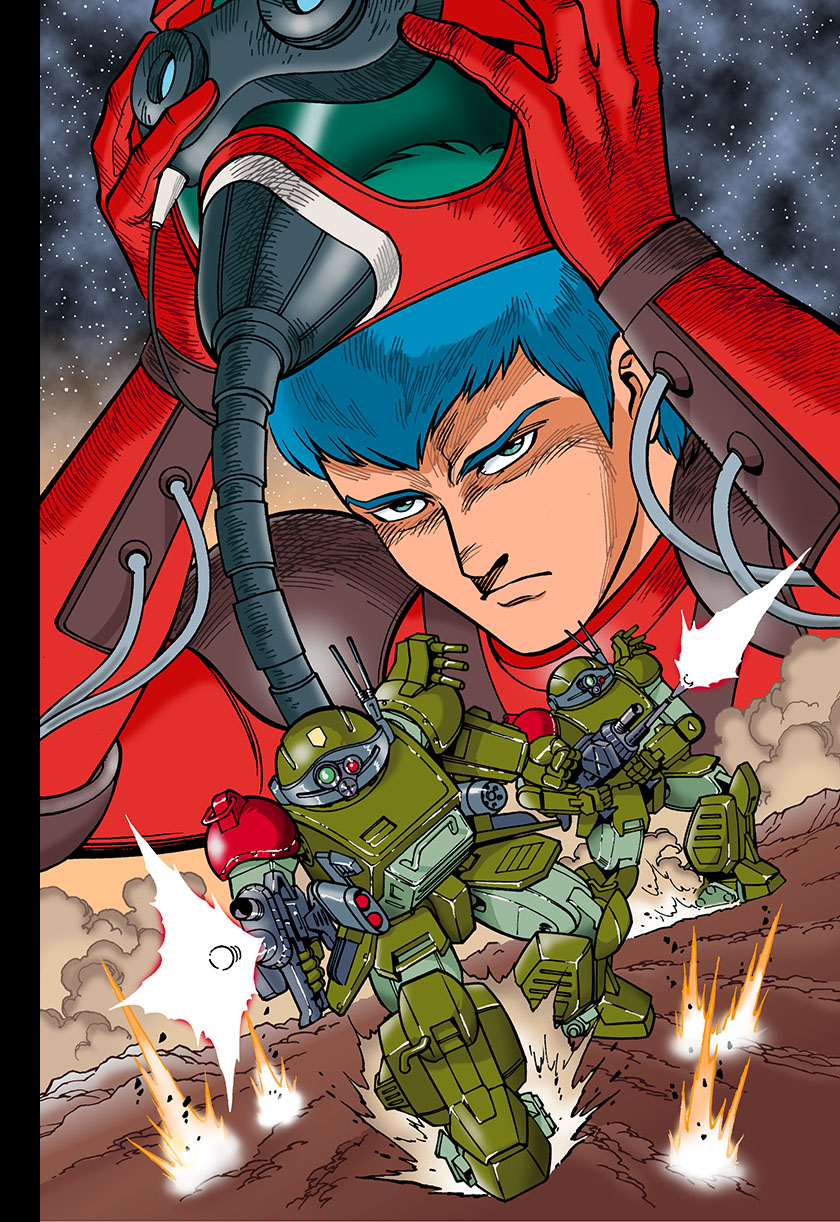 I’ve been extraordinarily lucky in my various exploits, capers, thrills and spills as an anime fan. I found my top two favorites early on and made them a part of my life in ways few others did.

In both cases, luck and perseverance brought amazing opportunities to me, over and above the joy of absorbing the stuff. I got hired to draw both as actual, for-real comic books (one of my covers is shown at right). I got to participate in bringing both to American audiences on DVD, which involved packaging and support media. I’ve delivered convention panels on both and talked them up on many a podcast.

But only one of these reached the level of a full-up website. I was deputized to run a Yamato site for Voyager Entertainment all the way back in 2002. I took it over and renamed it Cosmo DNA in 2012, and I still update it every month. (Visit it here.) If this had not come to pass, it’s almost certain that I would have dedicated that energy to a Votoms site instead. Since that opportunity was never given to me, I’m now giving it to myself.

This right here is a website-within-a-website: the Votoms Hub, where the tools and resources I developed for Cosmo DNA will be used to dive deeeeep into my other favorite. Glad to have you along for the ride. Keep watching as new content is added! 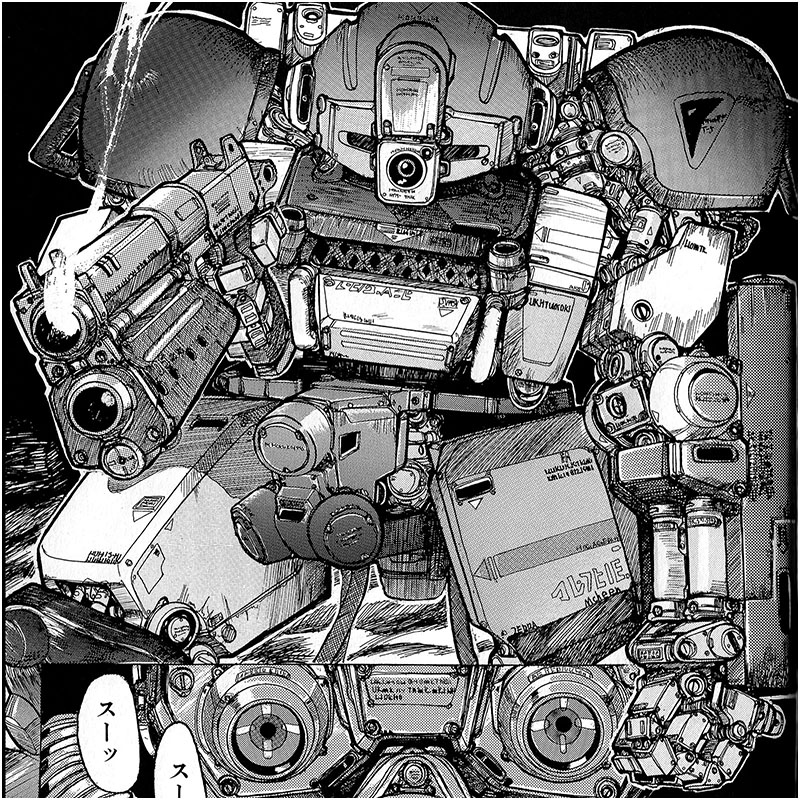 An apocryphal 1988 manga by Kouzi Akimoto speculating on the very first use of an Armored Trooper in battle, translated into English. 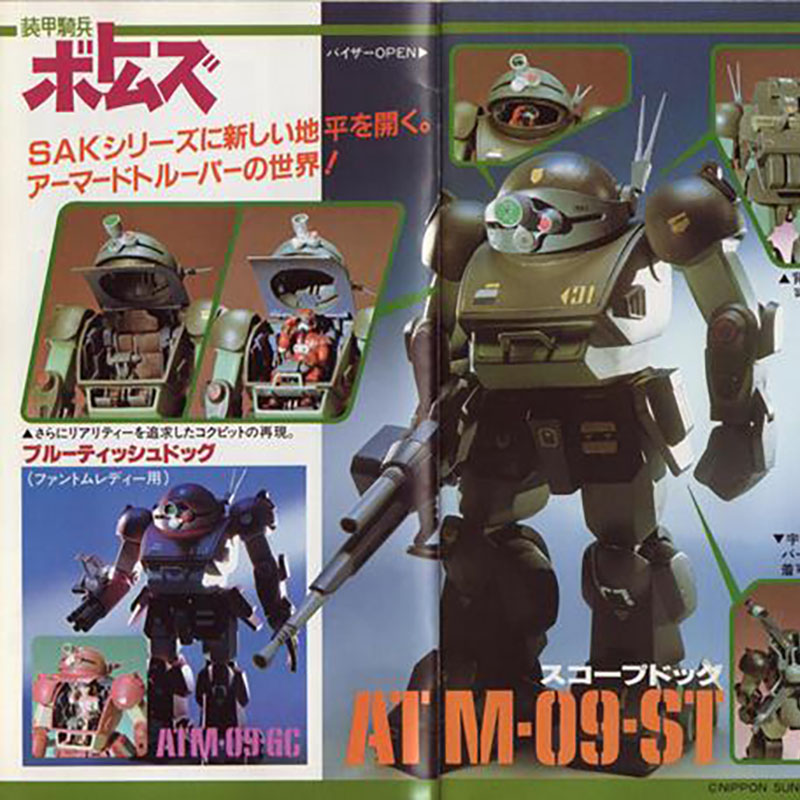 A complete overview of the plastic models released in multiple scales for the TV series from Takara, Union, and Kabaya with commentary from fans who were there. 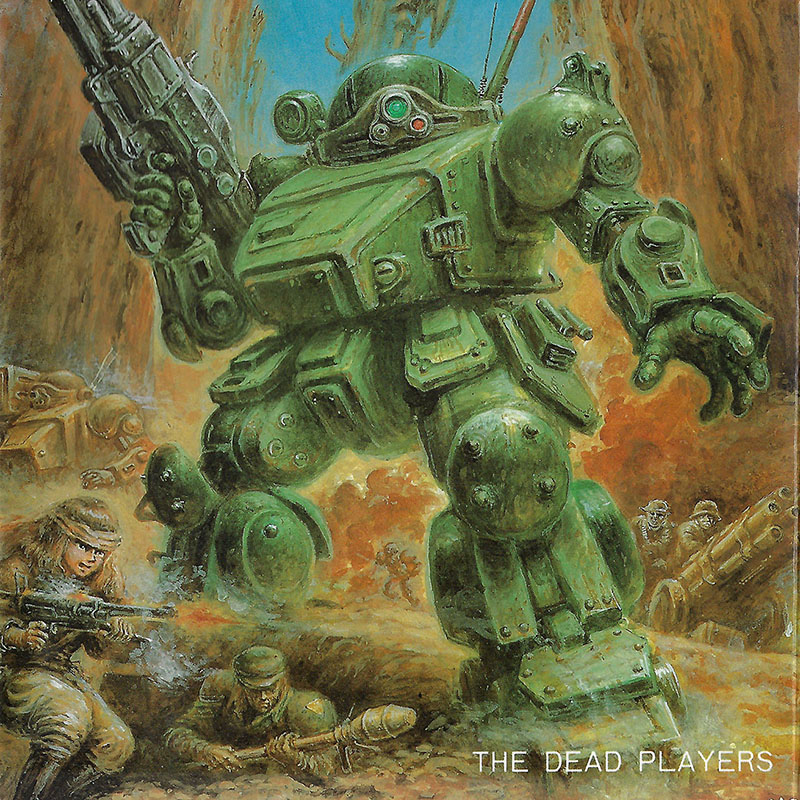 A collection of illustrations from the Planet of Vengeance Shido game book and mecha art from Blue Knight Berserga, all created in 1987. 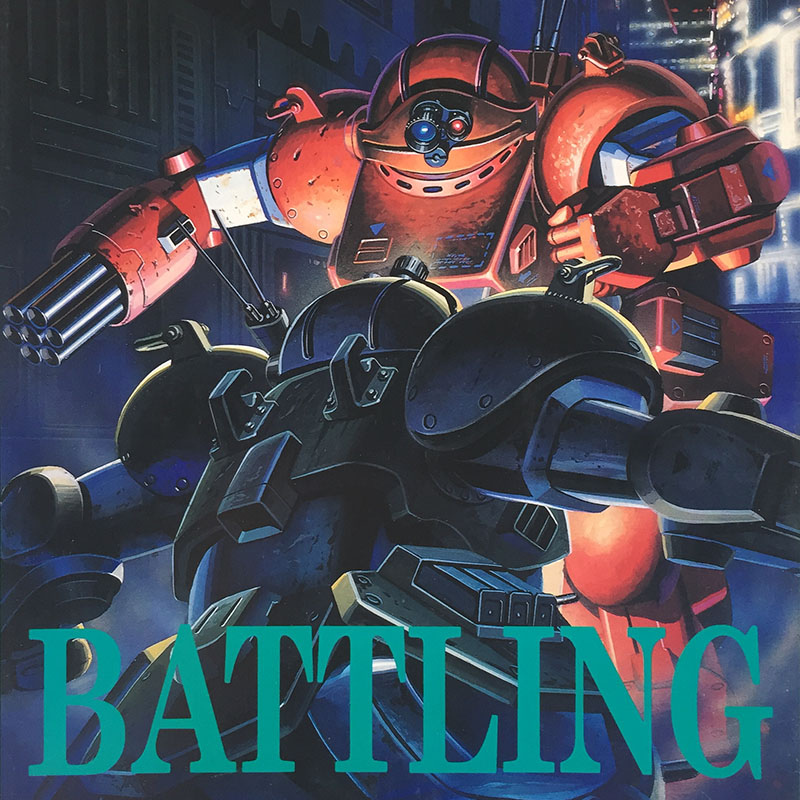 Every paper-based game from 1983 to 2018, including cards, books, and multi-component strategy games that all bring Votoms to your tabletop. 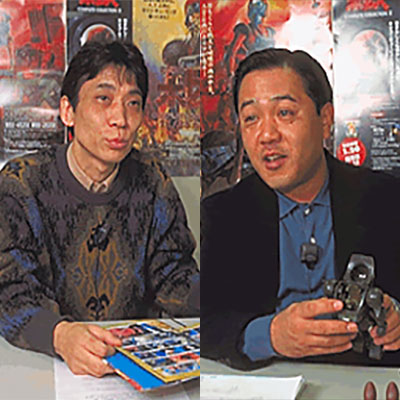 Soji Yoshikawa and Toru Hasegawa talk about their involvement in the series and OVAs with many an anecdote of the early days. 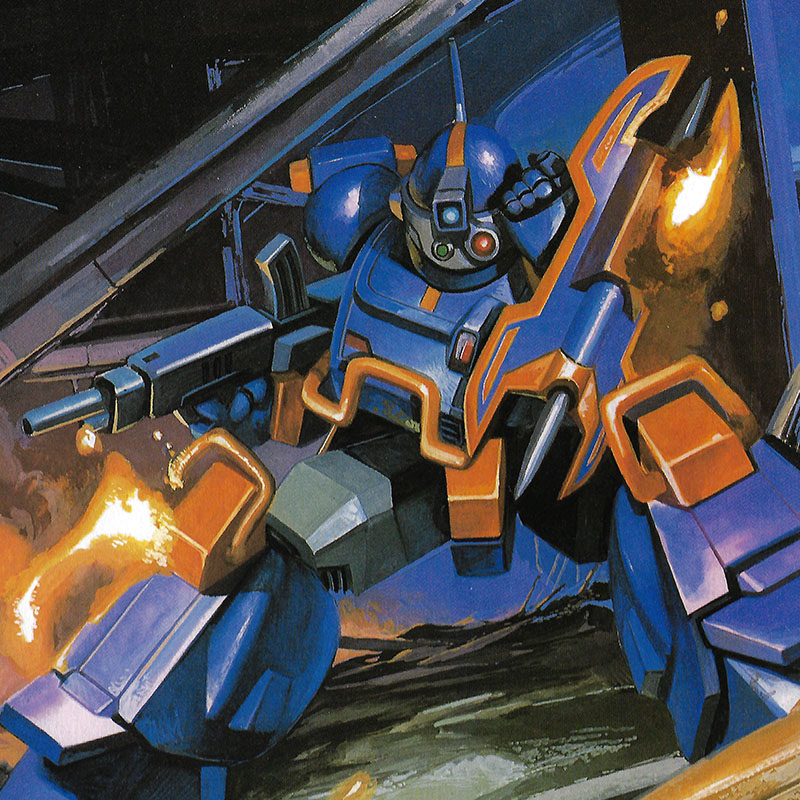 An extensive profile of the first Votoms spinoff story (launched in fall 1984) and the surprising number of products it spawned. 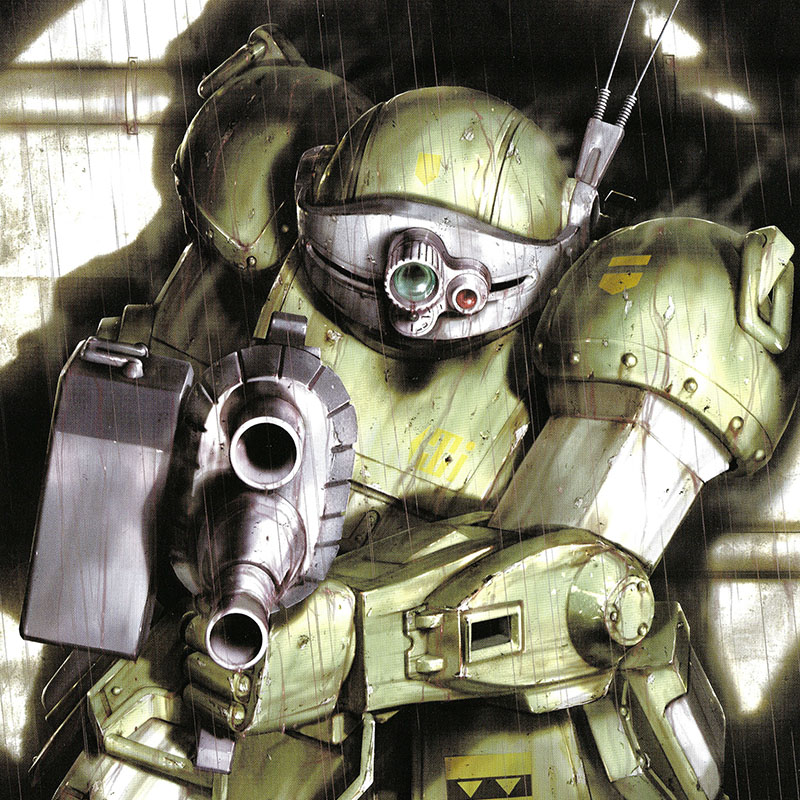 Morishita is the most prolific 21st century Votoms artist with intricate paintings on DVD sleeves, model boxes, and more. 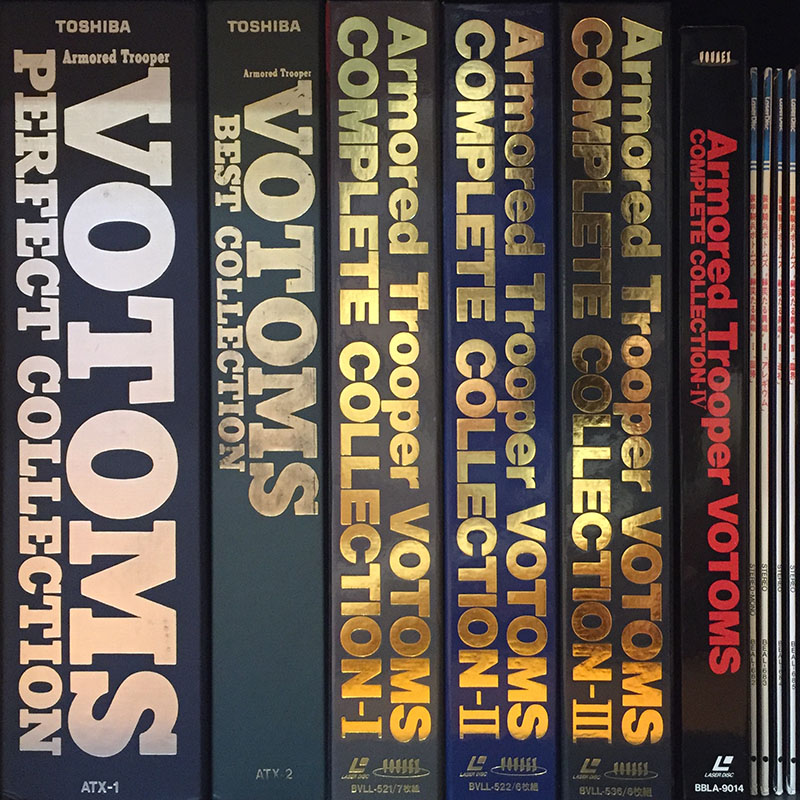 Every video release from VHS to Blu-ray with all their gorgeous packaging, including American releases that I was lucky enough to work on. 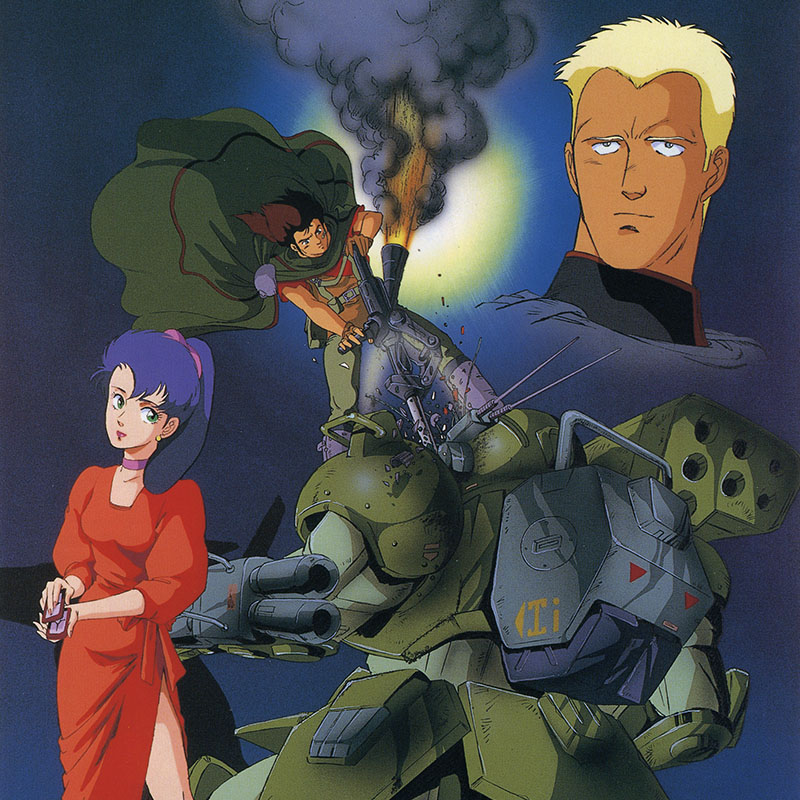 Takahashi talks about the genesis and production of the 1988-89 Votoms spinoff about a boy and his gun. 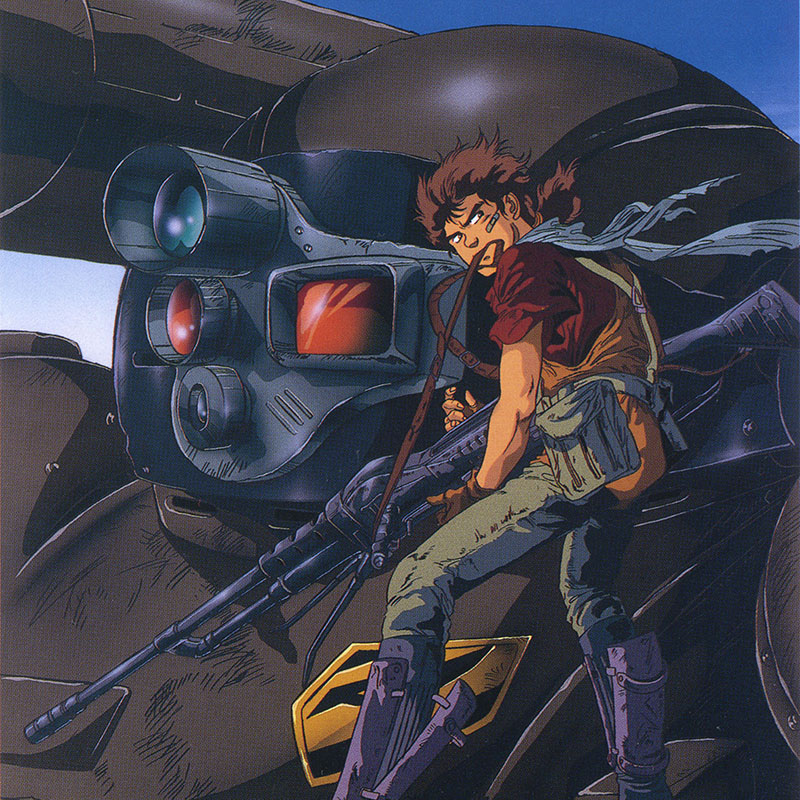 The making of the series told through interviews with the director, character designer, writer, and producer. 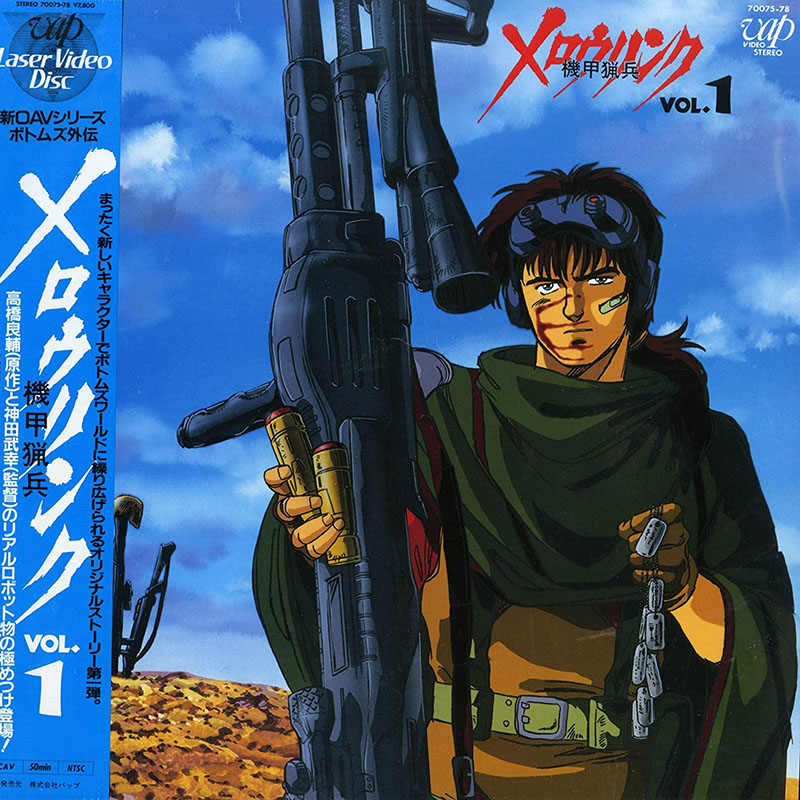 All the products I’ve found in decades of searching, including some I discovered while putting this together. 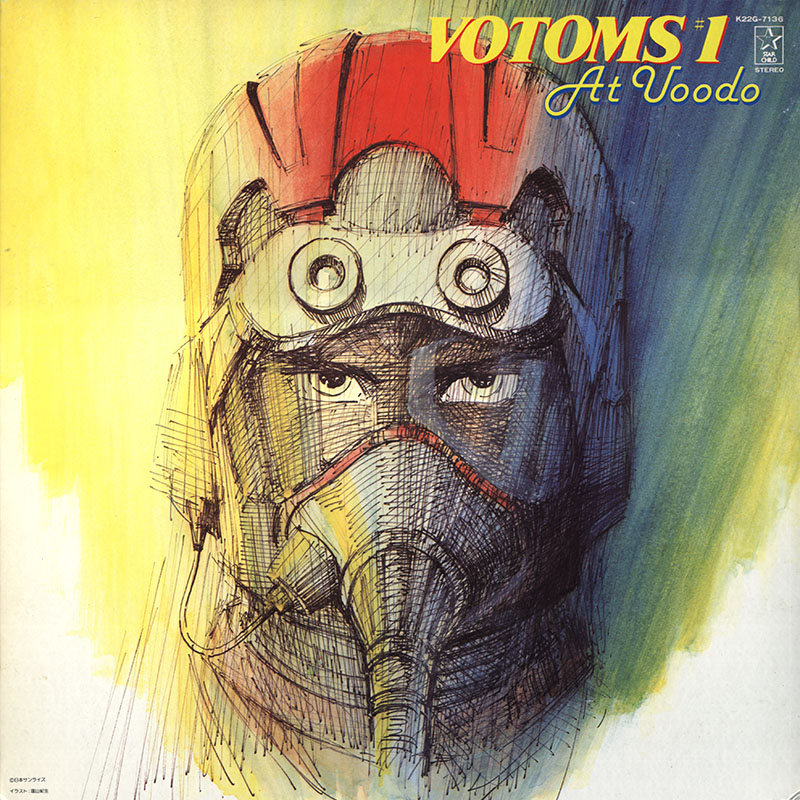 Every Votoms music release from the first single in 1983 all the way up to the latest reissue in 2021 with lots of links for instant listening. 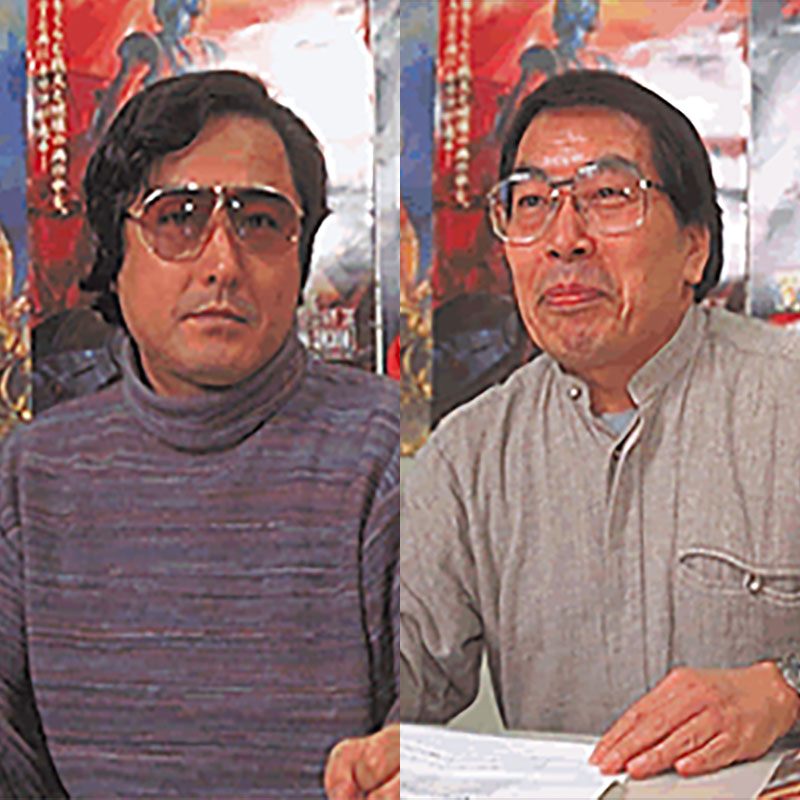 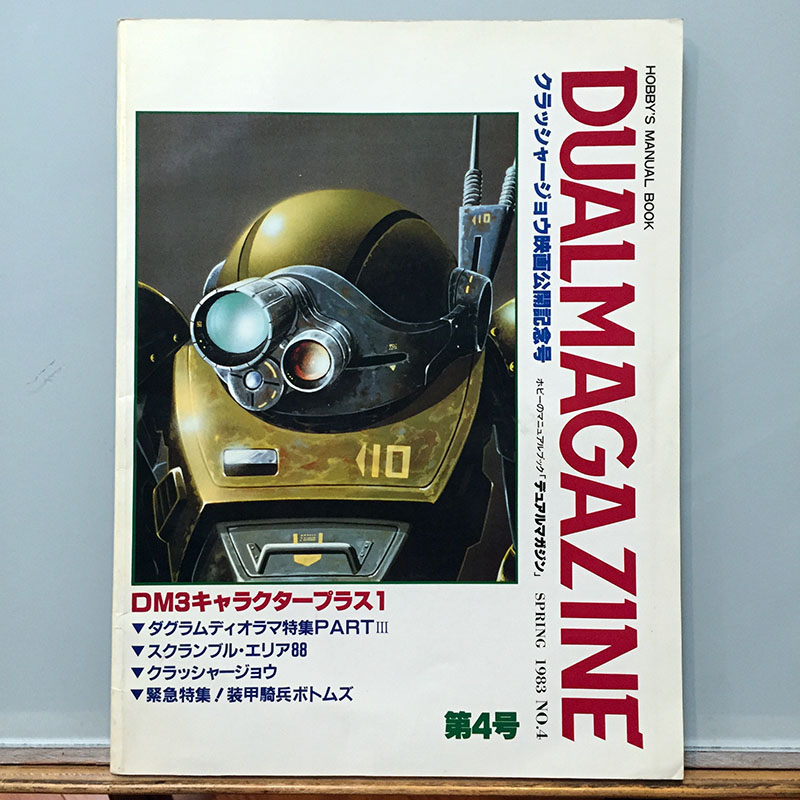 This third and final dive into the book world examines magazine coverage and fan-made doujinshis from the very beginning all the way up to the present. 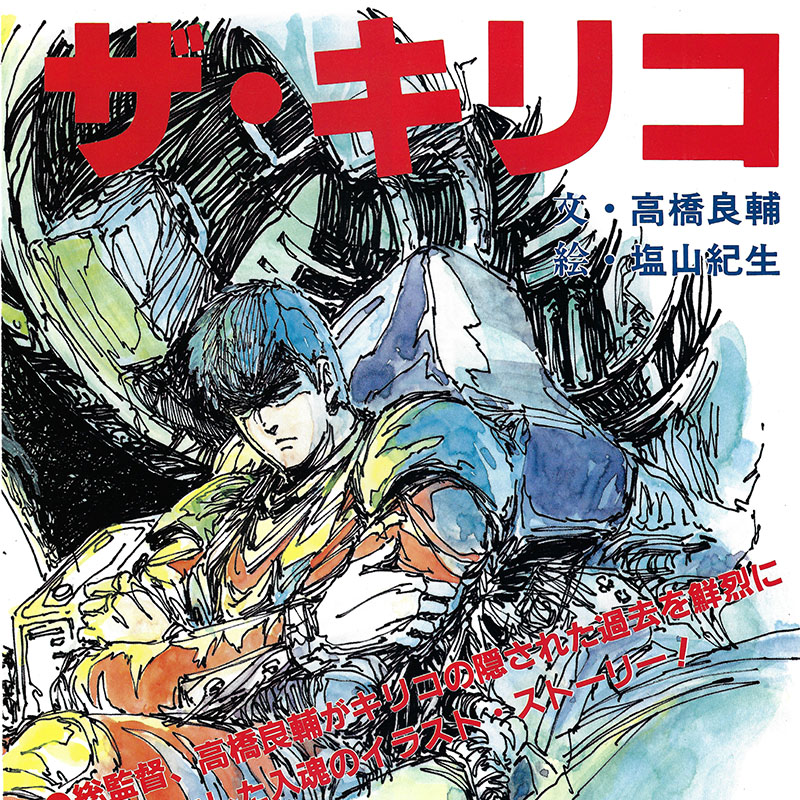 1985 side story by Ryosuke Takahashi

The first side stories appeared the year after the TV series ended, including this fascinating “missing link” by Ryosuke Takahashi, published in Votoms Odyssey. 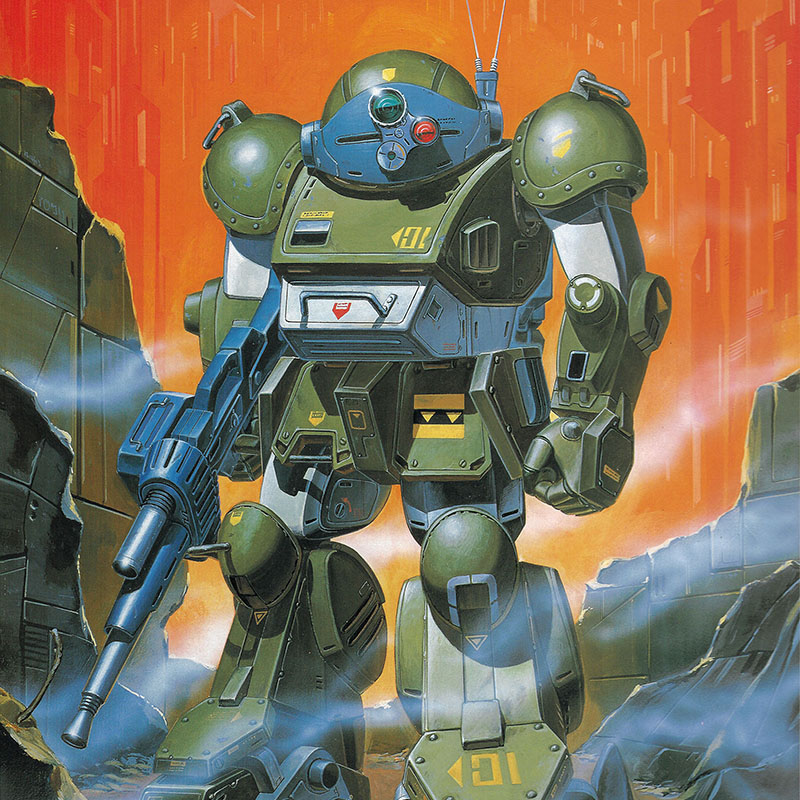 Some of the finest artwork in the entire Votoms archive appeared on the first line of model kit boxes. Browse the entire collection and a few related bonus pieces. 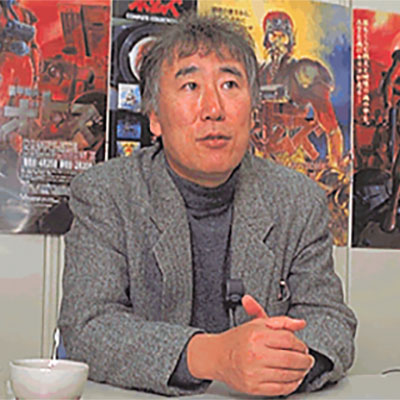 This interview, published in Armored Trooper Votoms Digital Memorials (1998), caught up with the creator of the series in the wake of Shining Heresy and looked back on everything that brought us to that point. 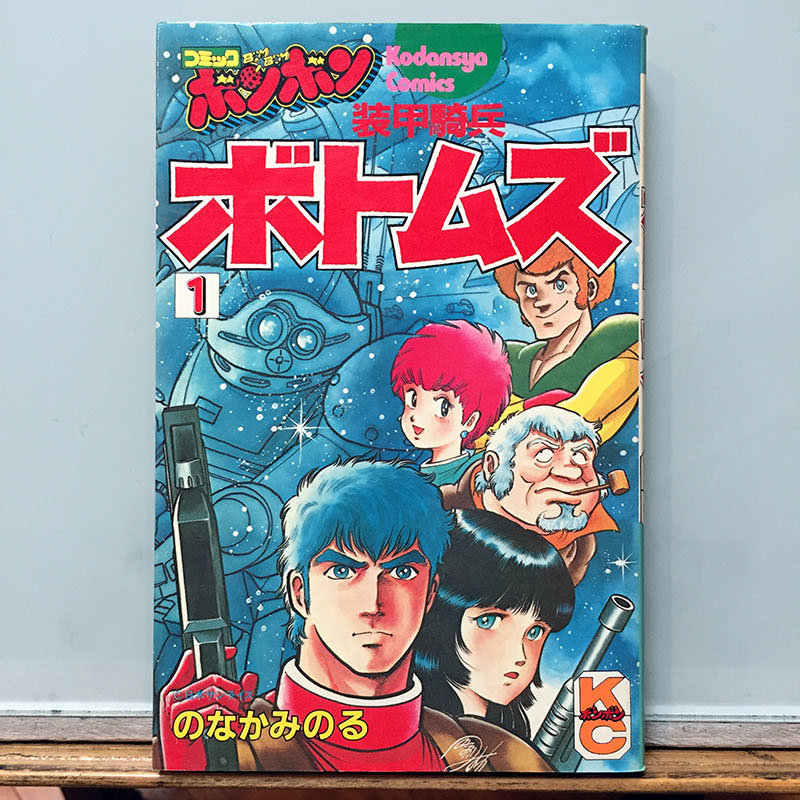 In Part 1, I covered books specifically devoted to the anime series, its spinoffs, and merchandising. This time I’ll dig into three separate categories: manga, novels, and “related books” for my fellow psycho-fans. 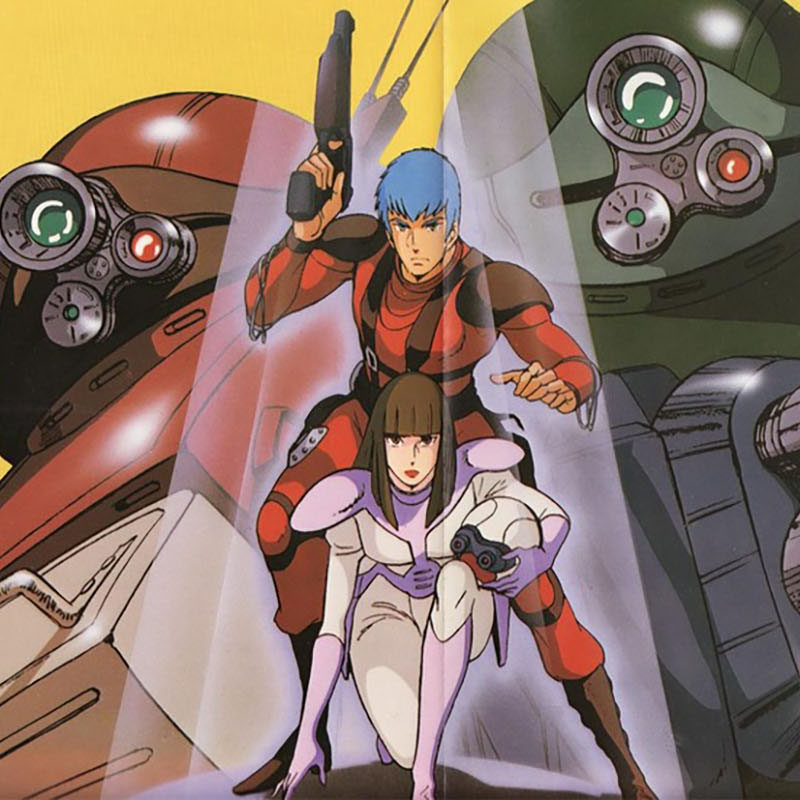 Since its beginning as a TV anime series, the world of Votoms has expanded across a wide array of media including books, comics, games, and more anime. This comprehensive index rounds everything up in one place (and there’s more than you think). 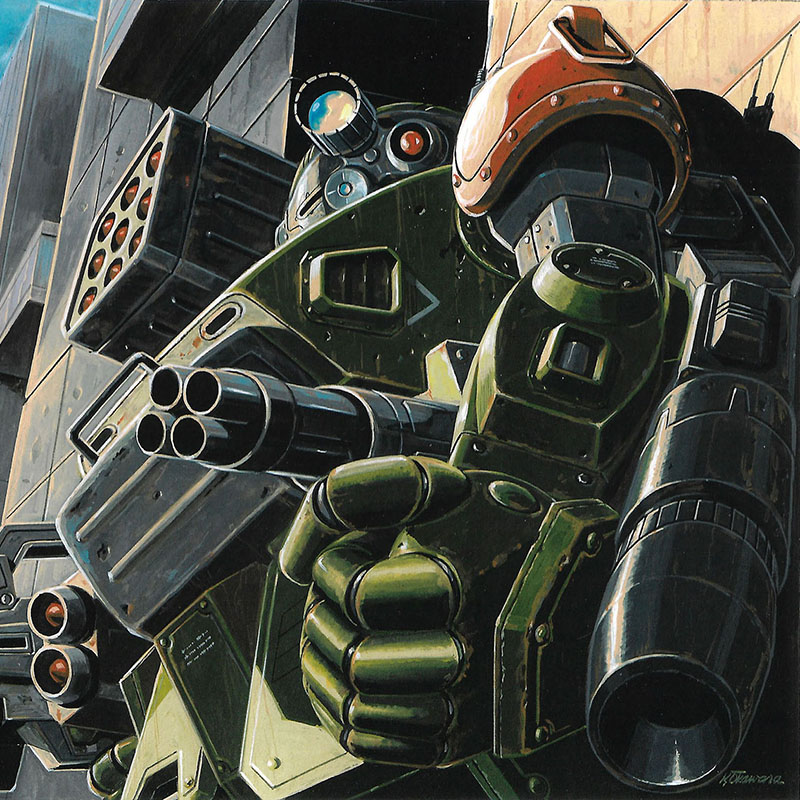 Mr. Okawara was the undisputed king of mecha design in the early 80s, and Votoms was arguably his most iconic creation, withstanding the test of time ever since. This collection of 39 paintings covers decades of work for promotion and products. 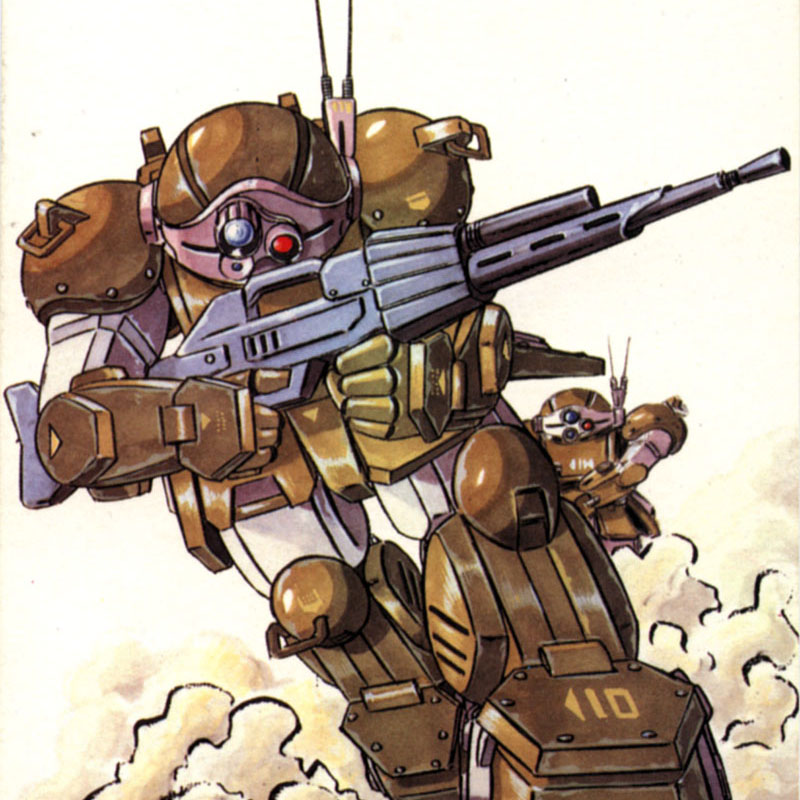 So what is it about this show? What lucky charm allowed it to escape the obscurity that settled in over so many of its contemporaries? What am I even talking about? Here’s an introduction to the series and a making-of article with quotes from all the primary staff members to explain how the magic spells were cast. 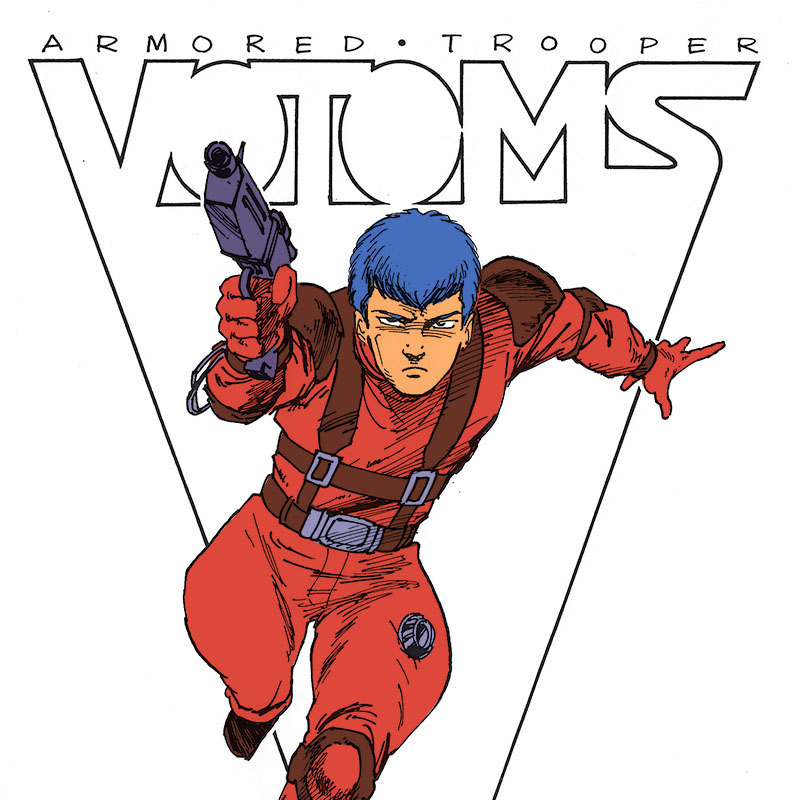 This passion project is – and I say this with all possible modesty – one of the most impactful ‘zines to come out of anime fandom in the USA. When I started it, I had no idea how far it would travel or what the results would be. I just wanted to tell everyone about an awesome show. The rewards that came back to me were literally beyond my imagination.

See it from cover to cover here 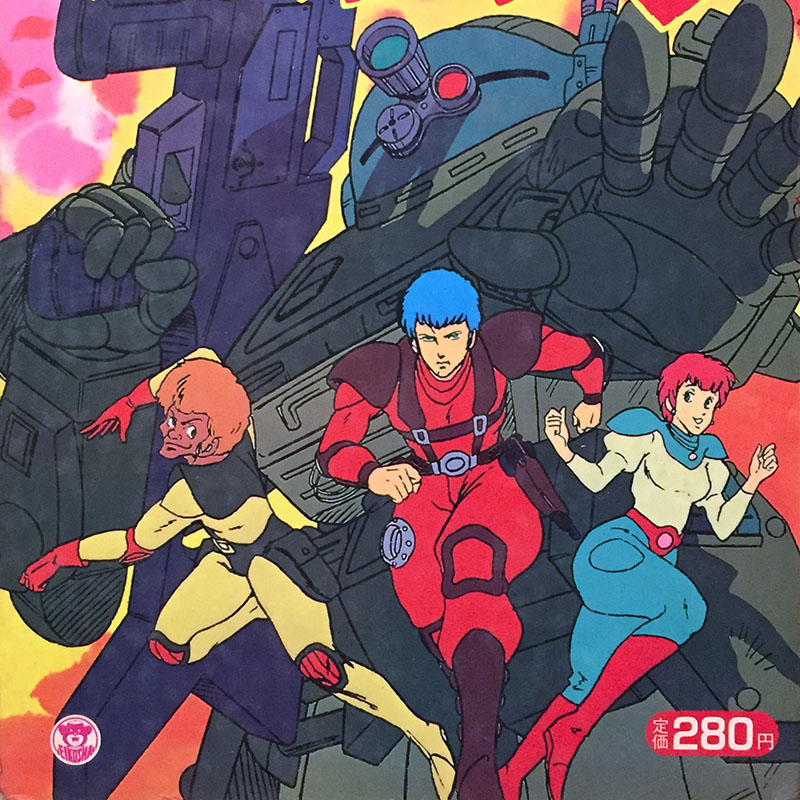 Part 1 of the Votoms bibliography covers what I’ll call “primary books,” which focus on the anime and various products. Manga, game books, novels, and other categories will fill up later parts. As far as I know, nothing is missing from my collection. But I would love to be wrong about that. 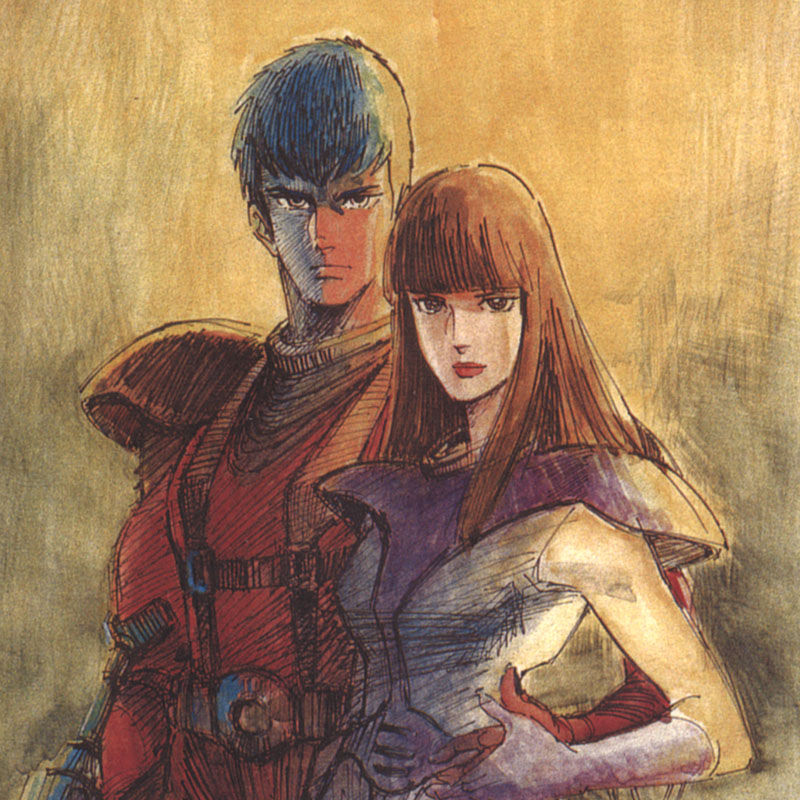 A collection of over 50 pieces, both illustrated and painted, by the original character designer for the series. He was called upon over and over to return to this world and render his characters again for video releases and multiple spinoff projects, giving us the chance to watch his style evolve over multiple decades.

This entry was posted in Anime World , What’s New