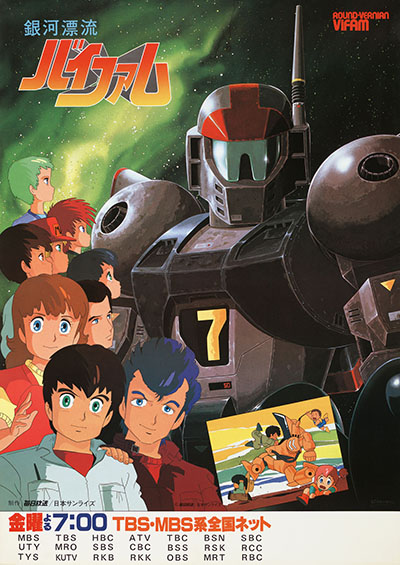 That’s the first of many surprises this anime series delivers, and definitely the first thought that goes through every viewer’s head when the opening song (appropriately named Hello Vifam) begins.

I first said hello to Vifam in the mid 80s, in the form of a sample episode at a friend’s house; the unforgettable and very funny Episode 21. Everything about it was instantly lovable: the characters, the mecha design, the music, and all the crafty things I was learning to notice like timing and voice acting and visual performance. There was a LOT of thought behind those deceptively simple lines and colors, and I decided on the spot to explore it all no matter how long it took.

In those days, it could take a long time indeed. The only way to see a full anime TV series was to collect homemade copies on VHS, gradually assembling a complete picture when more episodes turned up on trading lists. Other collectors were generous and happy to share, and new stuff was rolling across the ocean at a steady pace. At no point did I have any connections of my own in Japan, so I was limited to whatever others considered collectible.

Fortunately, robot anime was at or near the top of everyone’s hit list, so I was able to score new Vifam episodes every few months. Getting a tape in the mail became like catching up with friends. Picture quality was never great, but this art form is all about communicating intent, and no breakups or dropouts could stop it from pouring out of the screen.

Before we get much deeper, I’ll pause and explain the name. If you’ve heard of Vifam before now, the predicate you’ve most likely encountered was Round Vernian rather than Galaxy Drifter. This is the classification for the robot, and during the run of the show it was plastered all over the place in English. At some point, Nippon Sunrise adopted it as the official name of the show, making it easy to overlook the actual kanji characters in the logo. Those kanji read Galaxy Drifter, so that’s what I call it. Nothing wrong with Round Vernian, but it isn’t a translation. 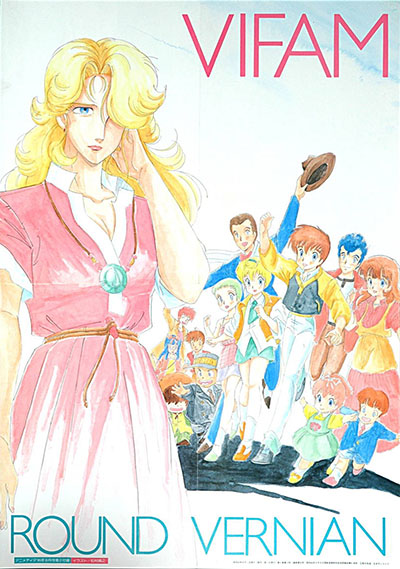 All right, back to business. As I indicated above, Vifam was love at first sight for me, and that love only strengthened as the story grew. There were two or three episodes that seemed to elude everyone, but having those gaps just gave me more to look forward to even after seeing the finale and direct-to-video OAVs. And there was plenty of merch to gather up, too; books and models and record albums were made in abundance. Mid-80s mail-order companies like Books Nippan were perfectly positioned to catch them, and they kept turning up at conventions like they were waiting for me. Every new discovery allowed the love to bloom again.

In subsequent years, I was a bit befuddled to find few others loved Vifam like I did. It was so fun and engaging and energetic, how could it turn anyone off? That’s when I learned a new lesson about being an anime fan: the vital importance of character design.

The chief designer of Vifam‘s lineup was the iconoclastic Toyoo Ashida. (His name is Romanized that way, preserving a Japanese idiosyncracy in which double letters indicate a long vowel. So it’s pronounced “Toyo” instead of “Toyu.” You learn a lot about names in this hobby.) He’d gotten his start in the late 60s and climbed the ladder in the 70s to become a highly-respected designer in the 80s. (I published a detailed biography here, and you can see his enormous list of credits here.)

Though Japanese fans were enamored of his lively, cartoony style, American eyeballs were being seduced by the likes of Akira and Bubblegum Crisis, slicker fare that dominated the late 80s. Compared to that, Vifam looked to some like a show for kids. The mecha was top-notch (designed by Kunio Okawara in his golden age), the score was rich and propulsive, and the story was as mature as anything else you could find, but every first impression hinges on character design.

That’s completely valid, since it’s largely about taste; the first rule of visual entertainment is that it has to visually entertain you. And if the look of the characters doesn’t turn you on, it’s always going to turn you off. I’ve dismissed many shows myself for that exact reason. So it’s with that understanding that I’ll say Vifam is not for everyone. But it sure as hell is for ME, and if you keep reading you may find that it’s also for YOU. 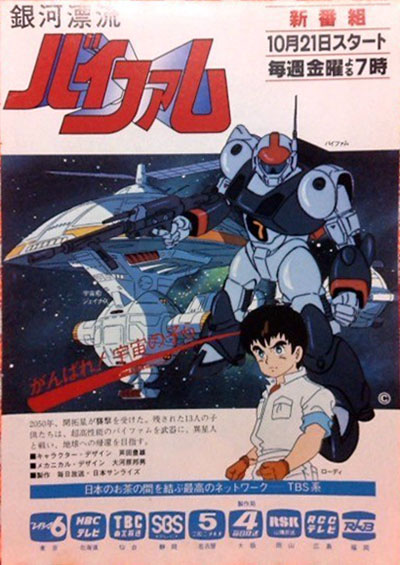 The TV series debuted in the fall of 1983 and ran almost a year, ending with 46 episodes. In the year 2050-ish, Earth people have established colonies on other planets in the Ypsilon star system, and they’ve been around long enough for families to take up residence there. One day, they are unexpectedly attacked by alien mecha. Earth has its own giant robots (for some reason) and the military is ready to fight back, but they are quickly outnumbered. The families are forced to evacuate, and this is where we discover the focus of the story: children, cut off from their parents.

As the danger mounts, 13 refugee children (aged 4-16) are thrown together onto the training ship Janus and watch as their adult protectors fall one by one in battles with the enemy. A few episodes later, they are all on their own. They struggle to survive one threat after another, intent on finding their parents amid the turmoil of interplanetary war.

That’s the high concept, as thrilling as gets with SF robot anime. But also, it’s just the setup. The real innovation is in the characters.

There was no shortage of children in anime before then, but these particular children were a new breed. Instead of idealized and pure-as-sunshine, each has their own personality, temperament, and anxieties. Some go together like bread and butter, others like oil and water. Some remind you of kids you knew or the kid you once were. Some are caretakers, others are brats. Bodily functions are fair game, and if you think the writers shied away from the dread specter of puberty, think again.

These kids were all written realistically to ground the story. Yes, they learn to pilot robots and maintain a spaceship (with computerized help), but these are simply an extension of today’s digital environment, where kids thrive. When I first saw the show in the 80s, it struck me as an anime Steven Spielberg might have come up with back then, when he was best known for his empathetic and honest portrayal of children.

Something else that made the series unique was its voice cast. The primary actors were teens, brand new to anime, and close to the age of their characters. They were ready-made to serve as real-life avatars, and were excited to promote Vifam in person or on camera.

Then there was the “Hey, it’s in English!” opening song, which was a sensation all its own. The use of English in Japanese pop culture exploded during the 80s, often applied for a dash of cool. Far from being a turnoff to viewers, the English lyrics in Hello Vifam just made it more interesting. Anyone could learn a Japanese song, but if you could sing in English you’d be sure to impress your friends even if you had no idea what the words meant. The band’s name was TAO, and their bilingual lead singer/composer was David Mann, whose wife Jeannette wrote the lyrics. TAO still gets together once in a while, and Hello Vifam is still on their setlist.

Despite all these bonuses, the ratings were never a guarantee, so the writers developed two story tracks; one that would end with two arcs (about 26 episodes) and one that would continue for two more (about a year’s worth). As they neared the end of the second arc, the shadow of cancellation hung over the show. Fans somehow got wind of it and mounted a petition to keep it going. Coincidence or not, merch sales were healthy (especially the model kits) and the show got the extension it needed. This accounts for a shift about halfway through where the stakes go up with a crash-landing on the enemy’s home planet.

After the series finished with a heartwarming sendoff in the fall of ’84, four direct-to-video specials followed over the next year. Two were compilations and the other two were brand new; one added an “unseen episode” and the other provided a welcome epilogue set one year later (it even came out exactly a year after the series finished). And this still was not the end.

In 1998, all the characters and most of their voice actors returned for more galaxy-drifting action in a companion series called Vifam 13, which aired in a late-night slot. The look was updated in a sleek-yet-minimalist late-90s style, set exactly at the midpoint of the story. Several robot anime series got “extra” episodes in OAV form, but here the concept was stretched over 26 episodes (two arcs of 13), which created a built-in handicap. No matter how dangerous things got, you knew everyone would get out alive, so it became difficult to maintain tension over a 6-month broadcast. Fans cooled on it after a while, and as a late-night anime it didn’t have much merchandising. But it’s still around on home video, and anyone new to the story can fold it right in. (If you can find it, that is. Vifam has been fully fansubbed, Vifam 13 has not.)

If you’ve read this far, I hope you’re intrigued enough to keep going! A deeper dive into the world of Vifam awaits you below! 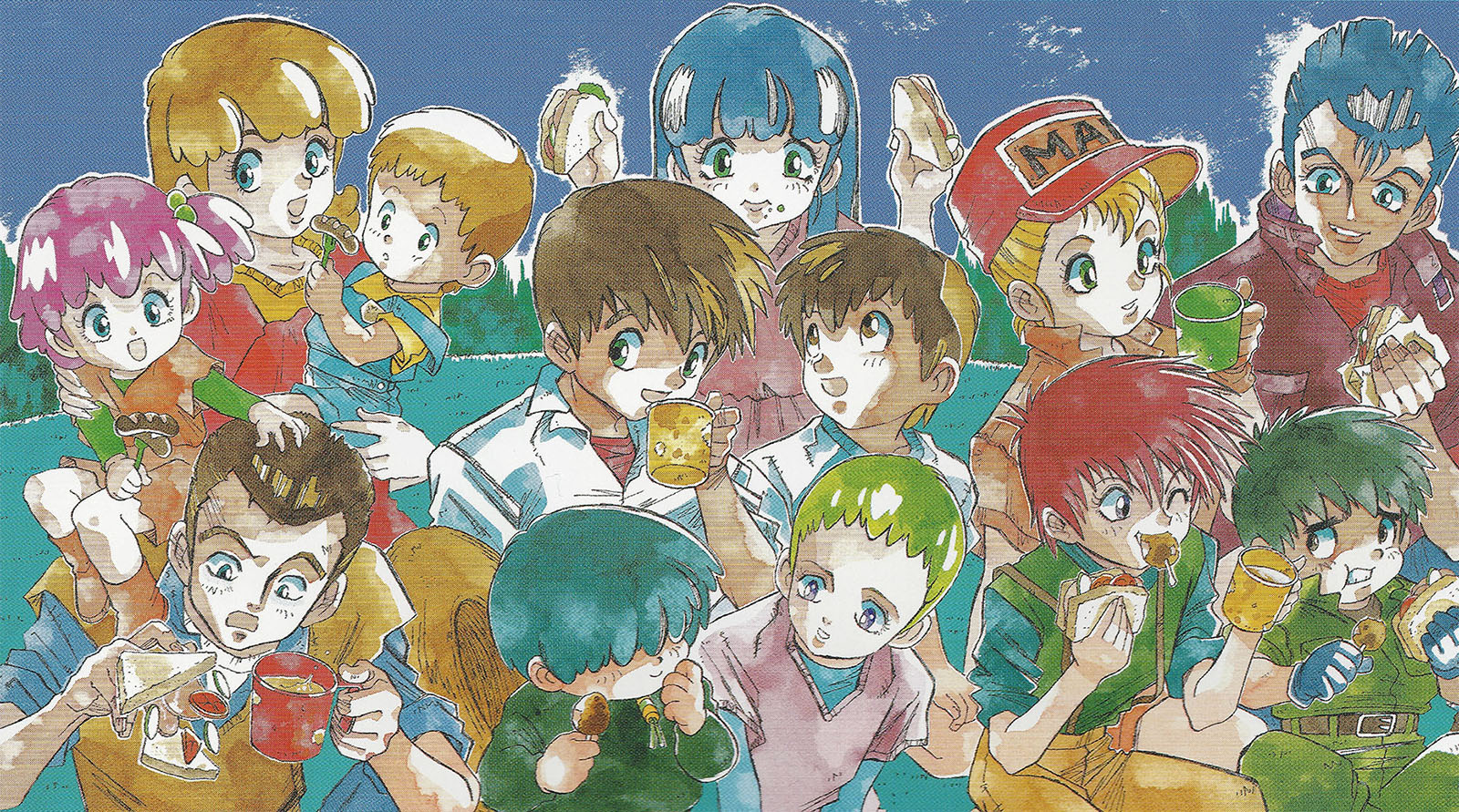 Insert song, You are Won•der•ful

Never Give Up with subtitles

Never Give Up, live 2010 performance by TAO

Never Give Up, unplugged cover version by Strawroof 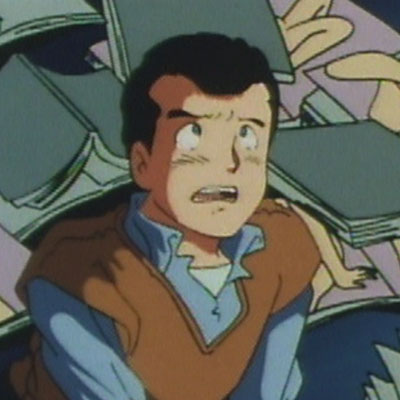 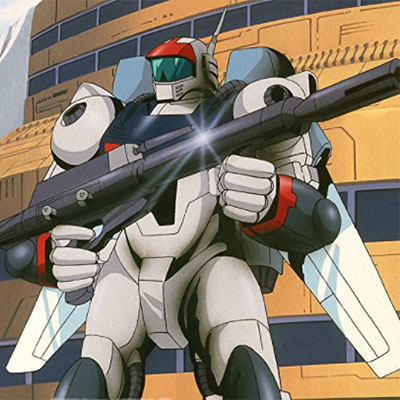 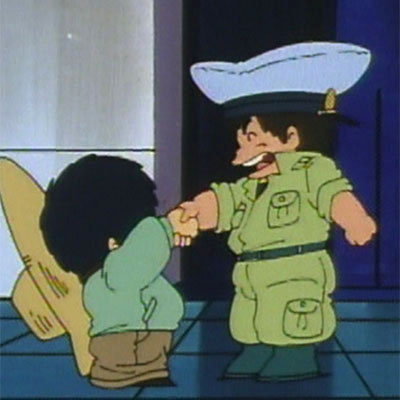 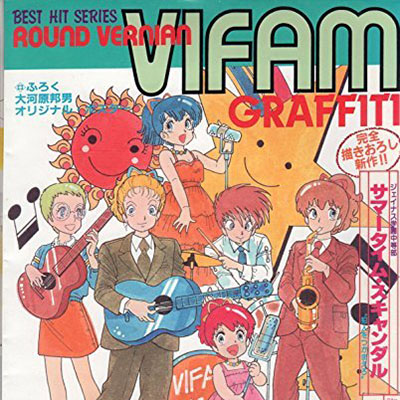 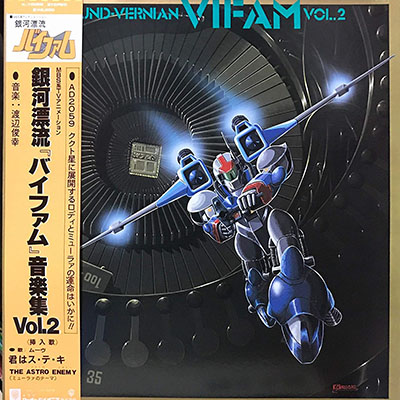 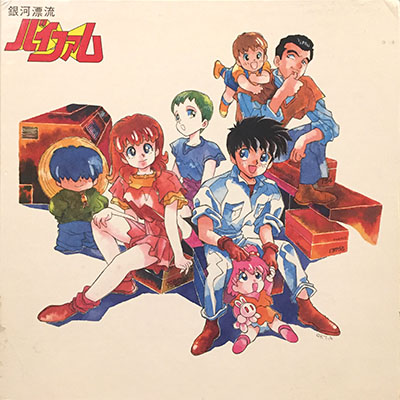 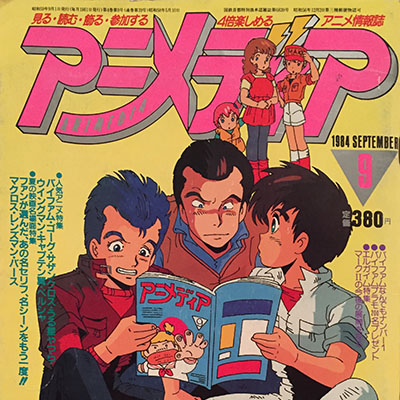 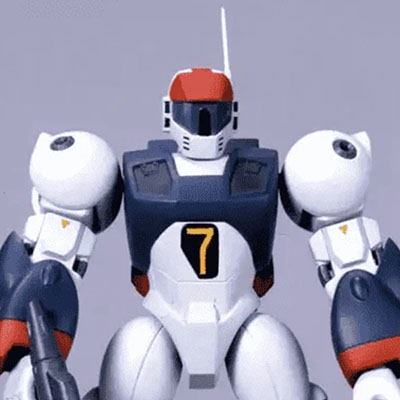 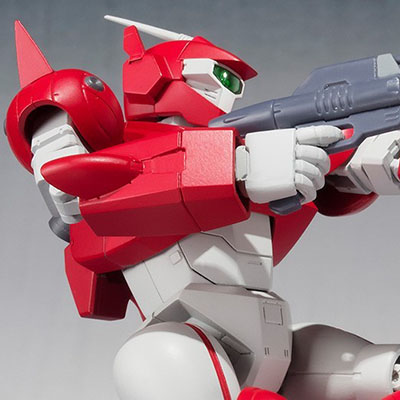 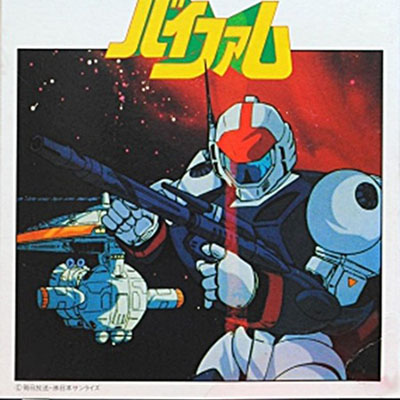 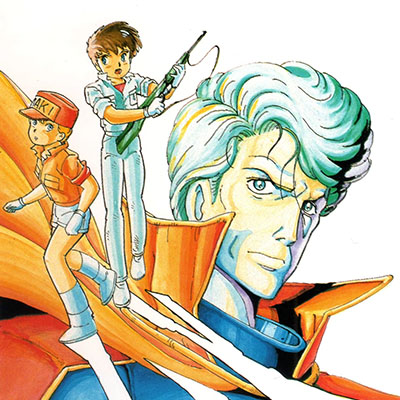 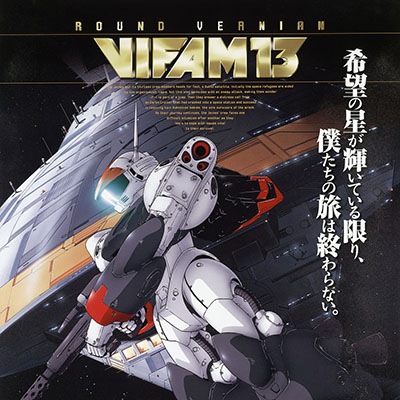 All about Vifam 13
This entry was posted in Anime World , What’s New