I’ve had a complicated relationship with Scooby Doo and his gang.

When I was a kid, they were the anchor for my Saturday mornings. I was four years old when Scooby-Doo, Where Are You debuted in 1969, which put me right in the sweet spot for early 70s viewing. I vividly remember the “guest star” specials (1972/73) with visitors from other cartoons or the real showbiz world, with Batman and Robin as the undisputed high point for me as a 7-year old. And I’ll admit it right here: I had a thing for Daphne. She was my first “it” girl. It was the hairband that got me. 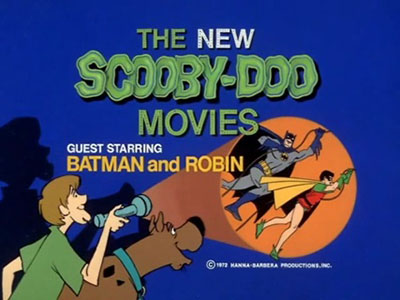 Then I did what most other kids my age did: graduated to more challenging media. I was pretty much done with Saturday morning cartoons by the end of the 70s, and done with American-made cartoons altogether when I got my first exposure to anime. Once I had that for context, it felt like I’d been suckered.

As someone who makes cartoons for a living now, I have nothing but respect for the labor and craftsmanship that went into my childhood favorites, but they were stuck in such a narrow, rigid lane that I felt only contempt for the decision makers. Those cartoons were all about repetition, and repetition is the death of art. Scooby Doo became the symbol of everything I despised.

This view was still burning bright when I joined the animation industry in 1996. Scooby cartoons were still being made, but it seemed like the TV version of McDonalds. I couldn’t imagine stooping that low. 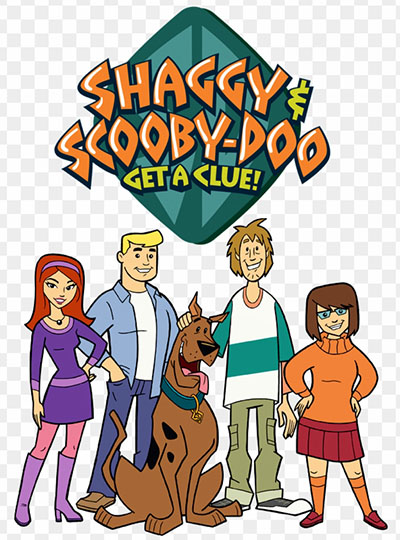 Fate, of course, had other plans.

In 2003, I signed onto my first show at Warner Animation Studio, a wild and lovable romp called Xiaolin Showdown, the closest American cartoons ever got to Dragonball. I enjoyed every minute of its three seasons and will cover it here at some point in the future. Our Supervising Producer was Eric Radomski, a key player on Batman: the Animated Series and my future boss at Marvel Animation Studio. I was glad to become a part of his crew and when Xiaolin wrapped up I looked forward to working with him on his next show.

Want to guess what his next show was?

Shaggy and Scooby-Doo Get a Clue was the 10th iteration of these characters. It ran on CW for two seasons, from fall 2006 to spring 2008. It doesn’t rank highly among favorite Scooby-Doo shows (and the intensity of its critics is hilarious), but I’m not sure how you would even rank them. Right from the start, Eric wanted it to be the red-headed stepchild of the bunch. It wouldn’t look like previous shows and it would strike its own comedic tones. None of us were all that excited to work on it, but we’d keep it interesting for ourselves by making it as weird as possible.

I decided that if this was the only work available (and it was, at the time) then I’d get as much income out of it as possible. I went full-bore on what most would consider a self-destructive schedule, taking a new assignment every two weeks in an industry where four was the norm. That meant I drew a complete act (about ten pages of script) in 14 days and then immediately went into another one. In so doing, I got a bite of every single episode, sometimes two bites. That level of involvement is very rare, and no one had any objection to me making their job easier. 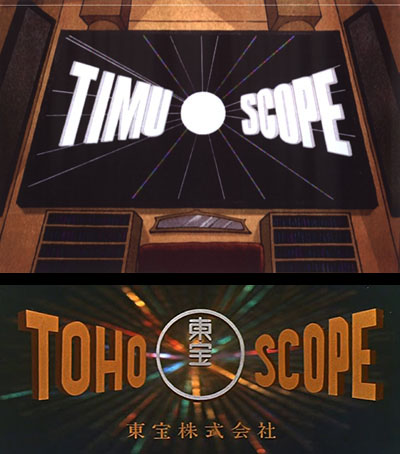 Getting this Easter egg on screen was one of the proudest
moments of my career (top). Find it in Season 1, Episode 12.

We did two seasons back to back with a total of 26 episodes, and I ended up drawing half of the storyboards. That’s the equivalent of 13 complete episodes, which has to be a record of some kind. Eventually I felt burnout approaching, so it was a relief to hear it wouldn’t be renewed for a third season. I didn’t even save any of the work for my archives, that’s how finished I was with it.

To be honest, I did get chuckles and nyuks out of some of the goofy stuff we came up with. We had no reverence for the characters, so our goal was to ridicule them as much as we could, especially the bad guys. These days, the series can be seen on Boomerang, Amazon, Youtube, and Vudu. Take the plunge if you like. Pick any episode, and you’ll see my work in it. I can say with 100% conviction that it’s unlike any other Scooby-Doo show.

See the opening title (hated by everyone) here.

See two of my segments on Youtube here and here.

Watch it on Vudu here.

The abominable Doctor Phibes. We made it our personal mission to humiliate him in every way we could imagine. 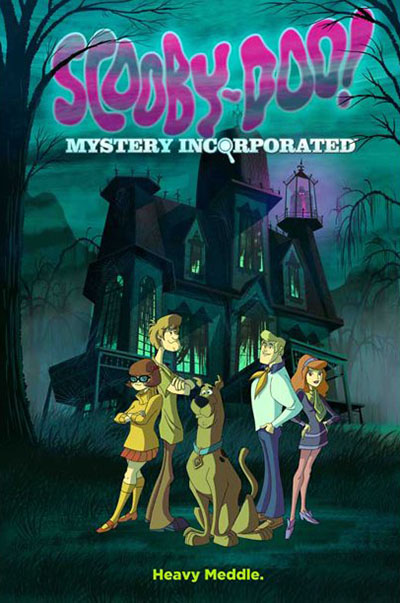 But wait, isn’t the title of this article Mystery Incorporated? Nothing gets by you, Sherlock!

This was the 11th iteration of the franchise (not counting whatever direct-to-video movies were made in the interim), running for two 26-episode seasons on Cartoon Network, April 2010 to April 2013. It was another try to do something different with the concept, but this time it edged more into serious action. I was unaware of it until I got a call in 2010 from Supervising Director Victor Cook.

Victor and I met ten years earlier on an aborted Atlantis TV series for Disney. It was discontinued about five episodes into production because the movie wasn’t doing well enough to warrant a followup, otherwise we would both have gone the distance with it. Vic liked my work and it was the kind of show I could sink my teeth into. But, you know…fate.

Vic needed help storyboarding part of a Mystery Inc. episode and I agreed to chip in. When I lamented that I didn’t think anything interesting could be done with Scooby-Doo, he answered, “we disagree here.”

And it turned out he was right. Mystery Incorporated had something new going for it: people like me who grew up on anime and wanted to energize the story with some of that magic. It had serious stakes, modern sensibilities, and an overarching narrative instead of disposable one-offs. I found the assignment surprisingly enjoyable for that reason.

I ended up contributing to two episodes about a year apart, on either side of an important, industry-wide transition. Up until 2011, all my storyboard work was pencil on paper. And that’s how I liked it. Please pardon a bit of horn-tooting, but if you ask anyone I’ve ever worked with in either comics or TV, the first thing they’ll remember about me is that I draw fast. It’s my super power. Not every idea I come up with is a gem, but getting them drawn quickly gives everyone something to respond to much earlier.

The transition I’m talking about here was the move from paper to computer tablets. And it was NOT fun for me.

The driver of this transition was convenience for those on the production side who had to spend hours scanning paper storyboards to make them digital. The downside was that we artists became saddled with a whole new computer interface that slowed us all down. Production’s gain was our loss. Assignments started getting smaller because they took longer to draw. Not a big problem if you’re on staff with a salary, but catastrophic if (like me) you subsisted on freelance work that paid by the script page. 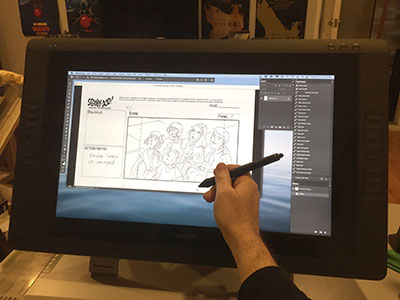 Cintiq: the Wacom tablet that changed our jobs forever.

Overnight, my usual ten-page assignments dropped to six, which took the same time to draw thanks to this new handicap. I still vividly remember my first day working on a tablet; it was like bricks were tied to my drawing hand. No more super power. That was on a Spider-Man series that I’ll write about at another time. I don’t have the stones to relive that trauma right now.

Anyway, this transition happened between my two Mystery Inc. assignments, which makes them particularly interesting to compare. The first one was drawn on paper with a pencil in 2010. The second came about a year later, after I’d wrestled control of the tablet and was picking up speed again. I liked this one even more than the first, since it was full of action and nice character beats (and it closed on a great Star Trek gag). I got the feeling that I’d missed out on something, but this was late in the second season and the party was just about over. When I look back on the second storyboard, the drawing style is surprisingly crisp and fluid, and I’ll be looking for ways to recapture it in the future.

Mystery Incorporated is now streaming on Netflix and both the episodes I worked on are on Youtube (links below), so it should be a simple matter to see them side-by-side with the boards. As for the future, two Scooby Doo shows in one career is enough for me. Other artists have probably done more than that. (I’ve personally worked on six different versions of Spider-Man, so it’s not unheard of.) At this point I feel like I’ve done my time with those meddling kids. 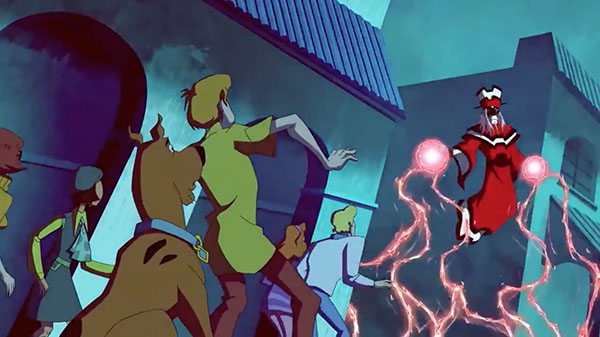 My storyboards: part A | part B | part C 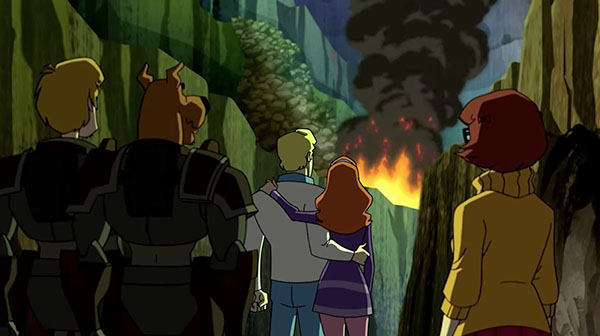 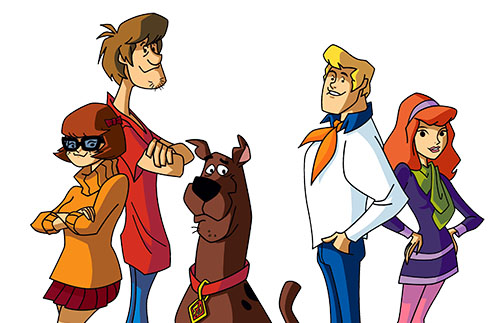 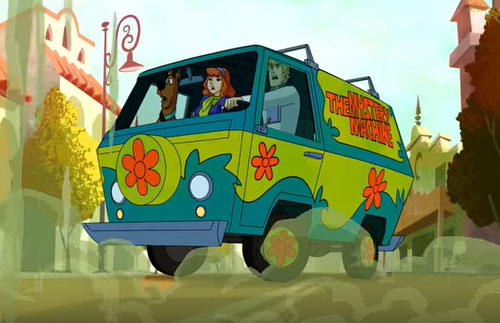