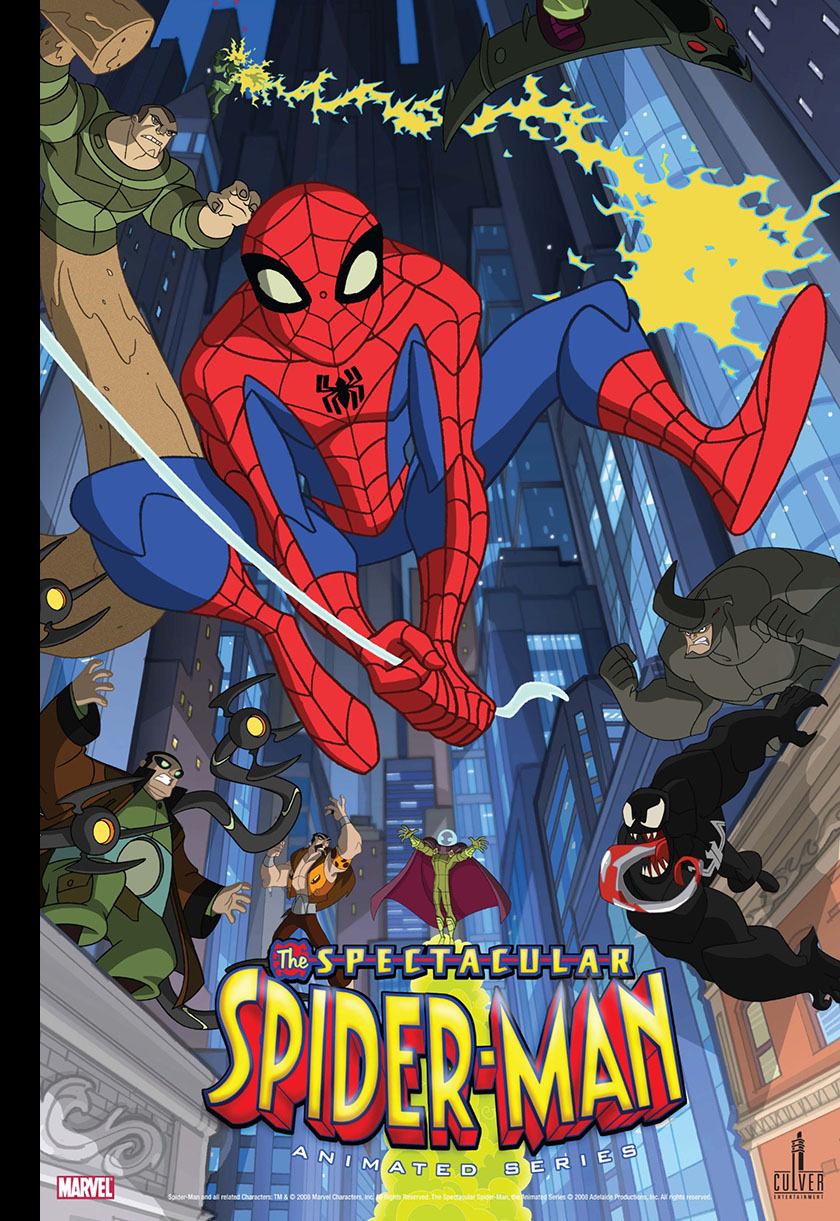 When I wrote about my experiences on the 2003 Spider-Man cartoon (now inappropriately referred to as The New Animated Series), I said it was the first of many Spider-Man shows I’ve worked on. In fact, there were six of them over a stretch of almost twenty years. They all looked and sounded different, but I found the basic storyboarding demands to be about the same. If you do well on one, you’ll probably do well on the next one. (And it seems there will always be a next one.) This is the story of my second outing.

In 2007, I was a heavy-duty freelancer with a lot of irons in the fire; Wolverine and the X-Men, Scooby Doo and Shaggy Get a Clue, and Batman, the Brave and the Bold all moved through my calendar that year. I was working 7 days a week, sometimes doubling up on assignments in a single day.

It sounds like a recipe for burnout, but it actually wasn’t. I’ve always been good at planning, carefully pacing things out so I could draw as small a chunk as necessary each day to meet the deadline. That opened up time to accommodate more work and also keep up with personal projects. And if I needed to take a day off, it wasn’t hard to squeeze in a double-chunk to make up for it. (It’s the artists who don’t pace themselves who always get into trouble and have to pull all-nighters to finish. That’s a recipe for burnout, and it makes people not want to work with you again.)

I got the call to freelance for SpecSM because I was known by the principal crew members. The supervising director was Vic Cook, who I’d worked for on Disney’s aborted Atlantis series. We were about six episodes in when they pulled the plug on that show. It was a bummer to lose the gig, but Vic already knew he wanted to work with me again. It was a similar story with the episodic directors; those who knew me were glad to have me on board. The ship was guided by the able hand of writer Greg Weisman, who I also knew. We would cross paths again on Young Justice. I was surprised to discover that Eric Vesbit, one of my closest friends, was on board as the associate producer – in addition to voice acting for Kraven the Hunter – so that was cool, too. 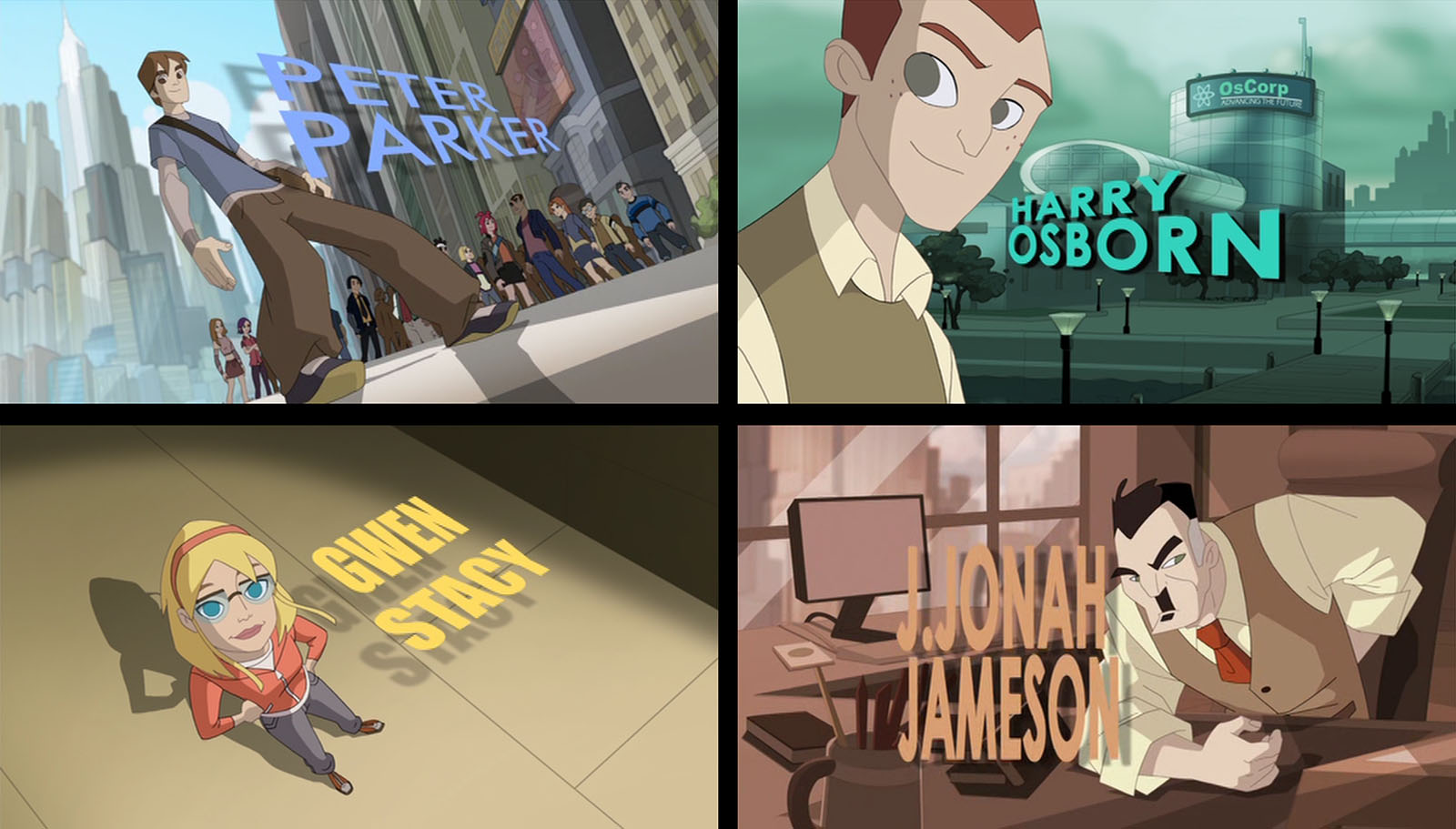 Easing into the show was like putting on well-worn shoes. I was back with Peter, Harry, and the rest after parting with them five years earlier. The new character design style threw me at first with all those misshapen heads and dishpan eyes, but drawing Spider-Man in action was pretty much the same. This time he was a 2D character rather than CG, so a different set of standards applied. Whatever I drew had to be animated by human hands rather than a computer.

The cardinal rule in 2D is that if it’s hard for you to draw, it will be even harder for an animator. So you stay away from complicated shots, crowds, and perspective shifts on backgrounds. On the other hand, hybridization was now a thing, so we had CG vehicles that could do just about anything we asked for. In my opinion (both then and now) that’s the best way to put computers to use in cartoons: have them draw mechanical objects and keep people in the hands of people.

Production began in 2007 and the series premiered on CW in March 2008. It ran for two seasons, concluding on Disney XD in November 2009. (That was the year Disney bought Marvel, so existing Marvel shows migrated to Disney networks.) Now it’s available on disc and streaming on both Youtube and Disney Plus (as of October 2022). It didn’t continue after its second season for the same reason as Avengers:EMH – Disney wanted to reboot both properties so that everything was compliant with licensing restrictions. Some characters had been optioned to different studios and couldn’t be part of the show, so it was much simpler to start a new show without them.

I was quite swamped with work on other shows during season 1, so I only had time to contribute to two episodes. Things opened up after that, and I worked on four episodes of season 2. Here are the bits and pieces… 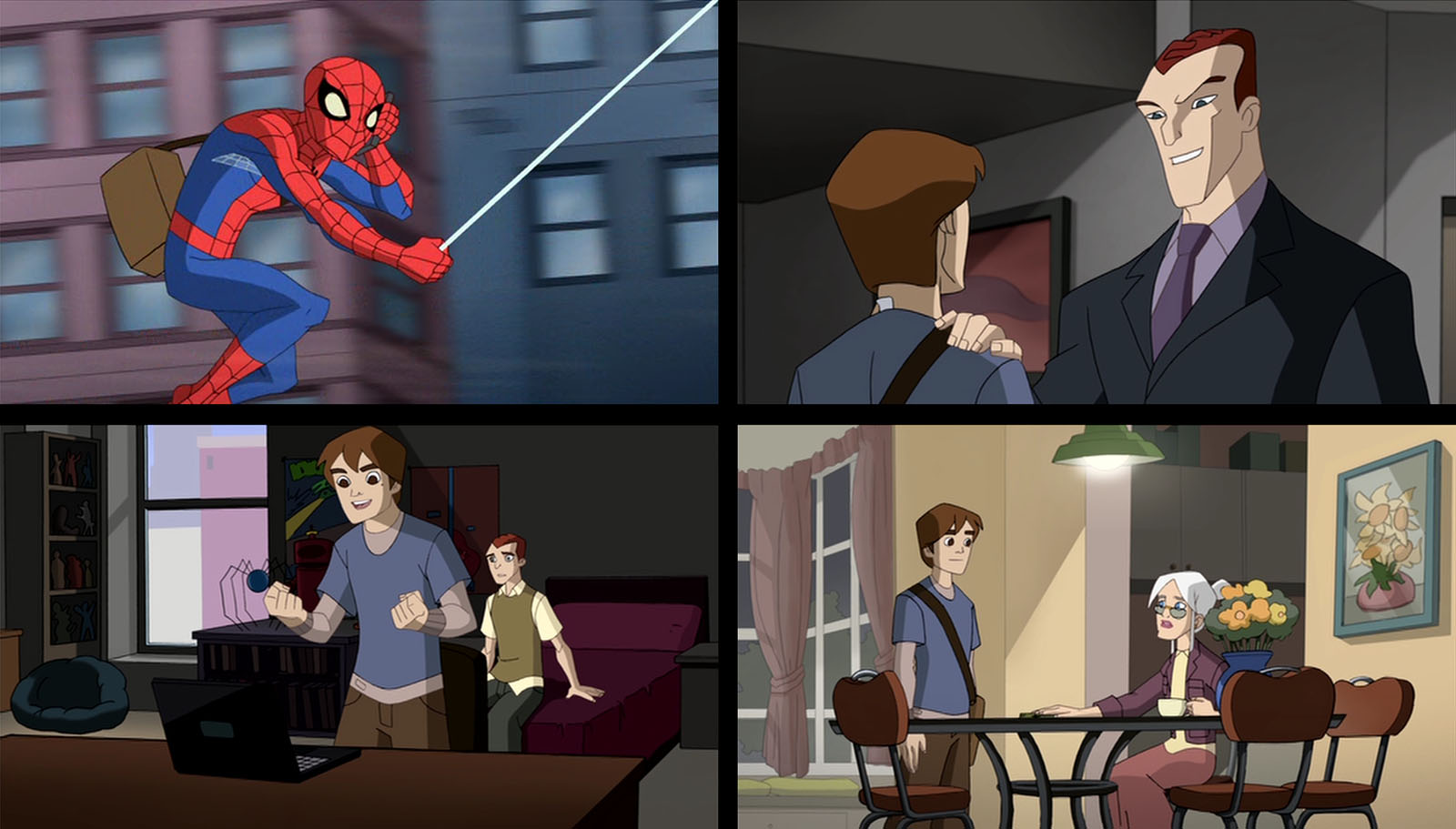 While Peter takes on the responsibility of helping Aunt May pay bills following Uncle Ben’s death, Montana, one of the Enforcers under the Big Man’s employ, becomes the Shocker to fulfill his responsibility: eliminating Spider-Man.

I did two segments for this episode, both of which were sort of a low-calorie warmup for more. The first part started in act A with Spidey swinging and talking, then meeting up with Norman and Harry Osborn. The second part came after all the action was over, going from a confrontation between Norman and Harry to the end of the episode. 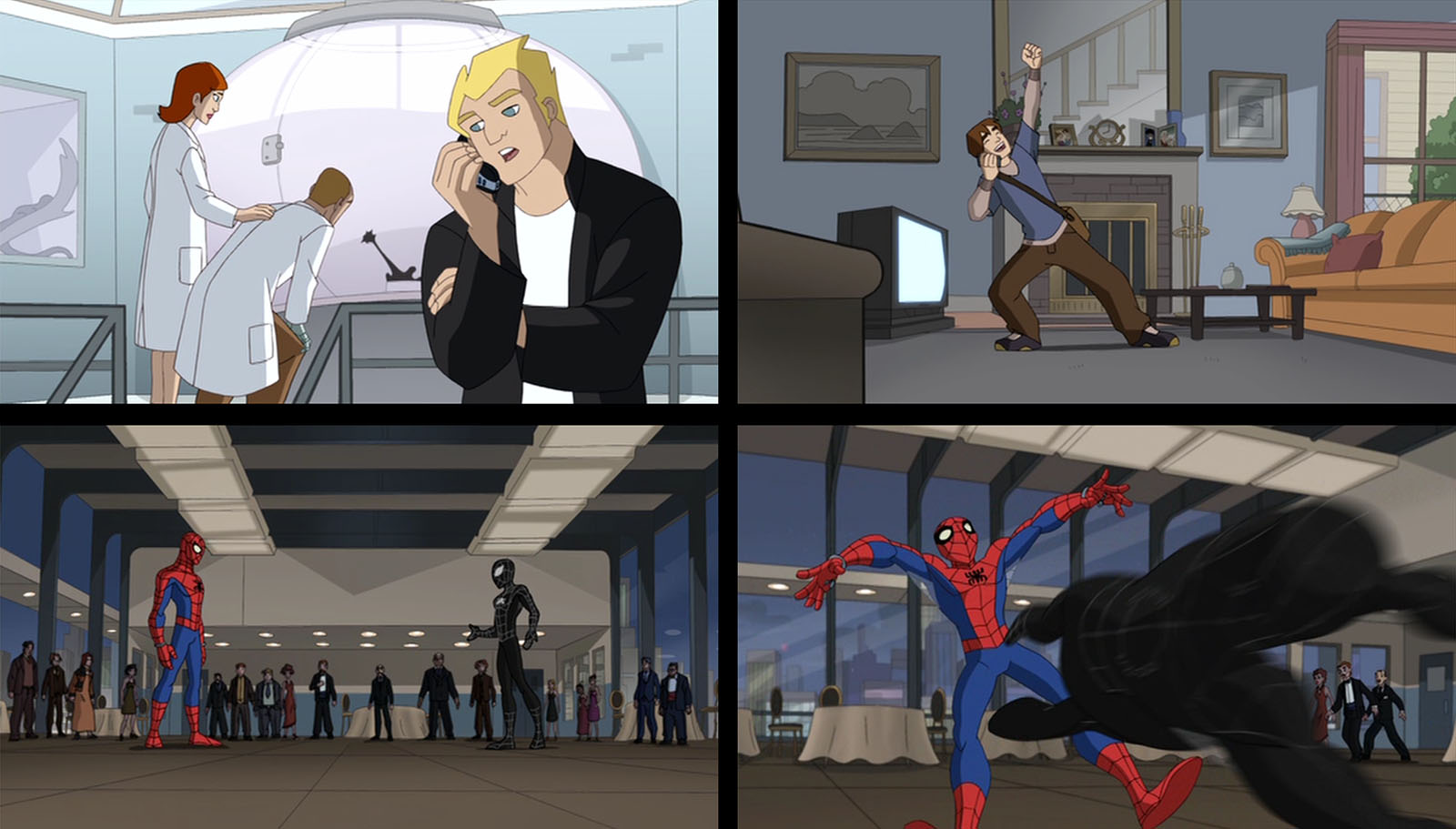 During an encounter with the Black Cat, an alien lifeform that attached itself to Colonel Jameson’s space shuttle bonds with Spider-Man, granting him a new black suit with enhanced abilities. Meanwhile, the Chameleon starts framing Spider-Man for various robberies, leaving him no option but to team up with Black Cat to stop his new enemy’s crime spree.

My segments for this one were the opening teaser (setup for the episode) and a cool fight between Spidey (black suit) and Chameleon (in Spider-Man suit) on a boat. It was my favorite storyboard of the season, so I kept a copy for my portfolio. 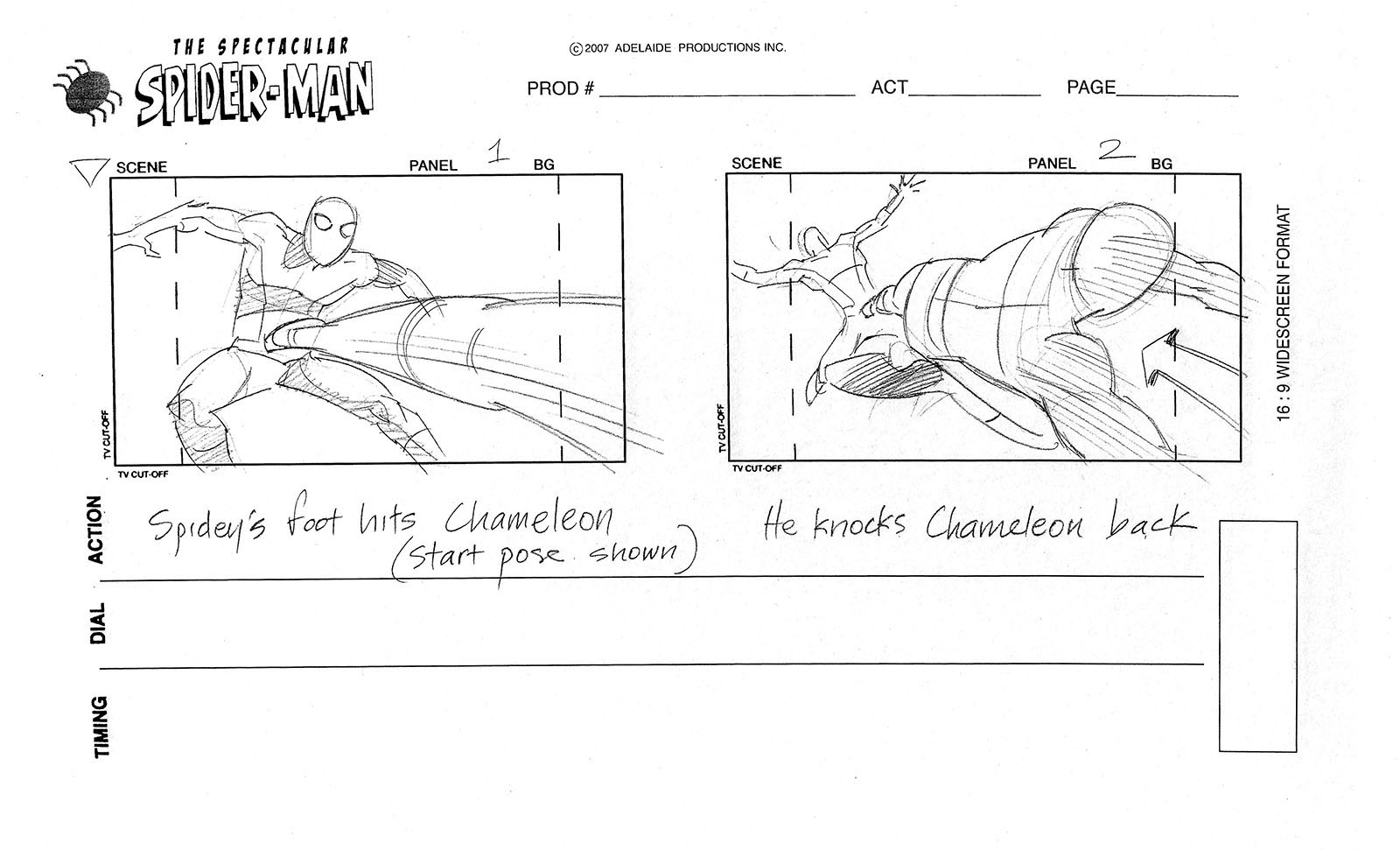 See it here: First half | Second half 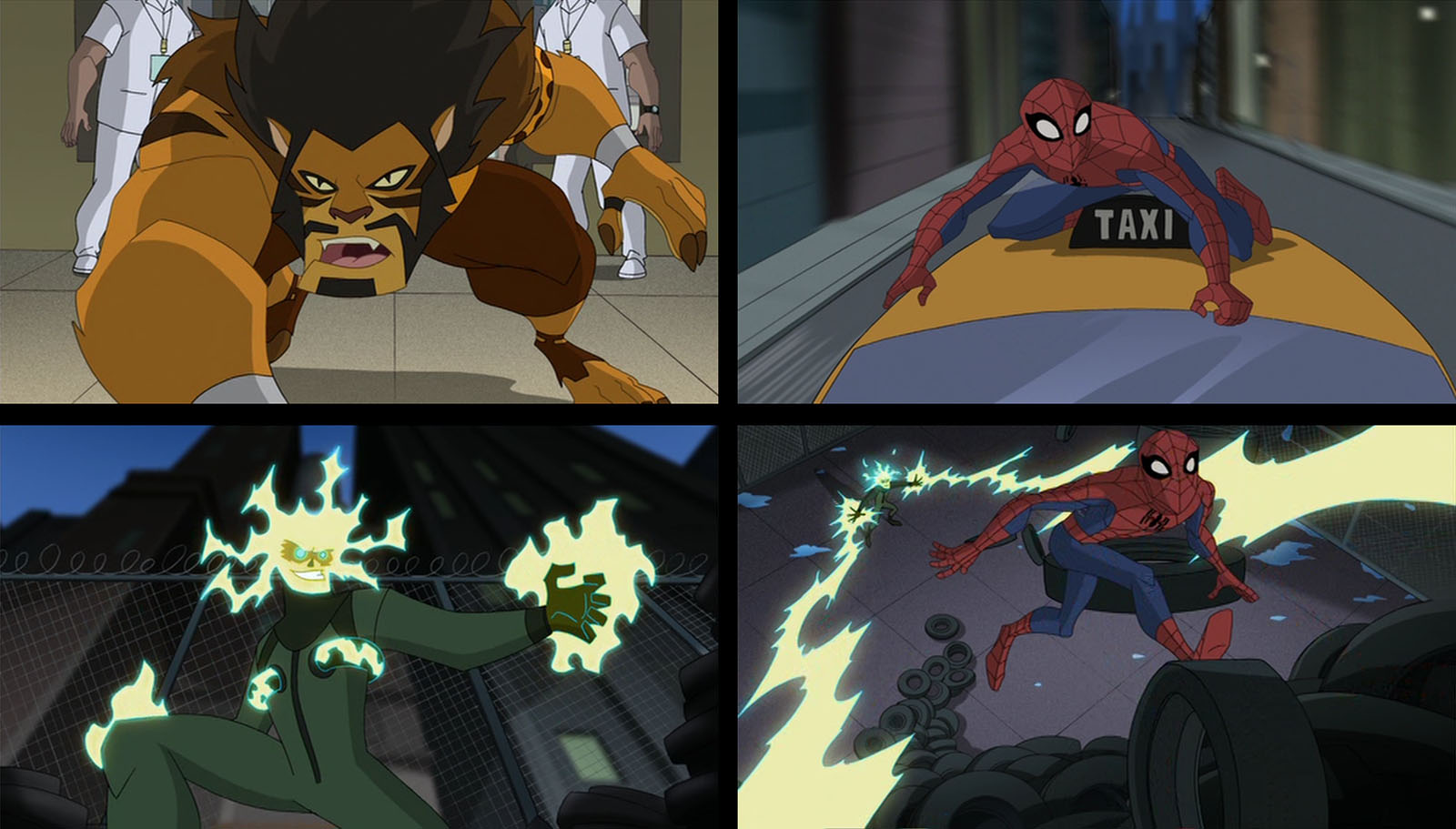 Near Christmas Day, the Sinister Six reunites under the Master Planner with Sandman, Rhino, Vulture, Electro, and new members Mysterio and Kraven to destroy Spider-Man. Meanwhile, Peter Parker finds his wandering eye prevents him from being with Gwen Stacy.

I storyboarded the opening sequence (after the main title) and a fight in a tire lot between Spidey and three villains.

See it on Youtube in 8 segments (my work appears in segments 1 and 5). 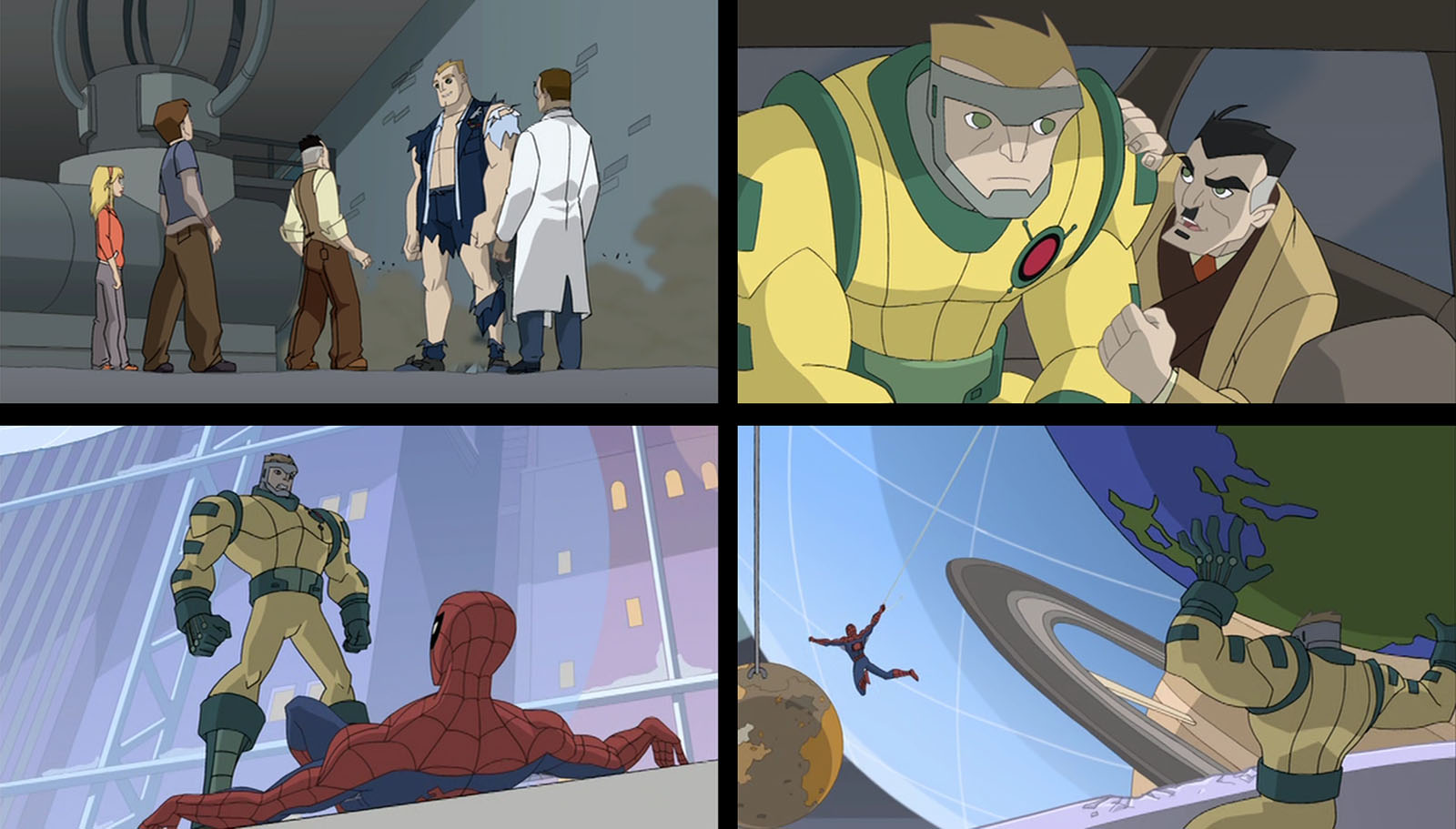 Spider-Man is framed for a series of crimes when alien spores infect John Jameson. J. Jonah Jameson convinces his son to become a superhero, but John’s motivation to help others becomes his motivation to destroy Spider-Man after believing he is a menace.

My first segment surrounded the main title; the teaser and most of act A. The character design for John Jameson (as
“Colonel Jupiter”) could have come straight out of The Brave and the Bold. I also had the pleasure of storyboarding a fight scene in act C, set in New York’s Hayden Planetarium (one of my favorite places). At least, I think I did that part. My style is all over it.

See my parts of act A on Youtube here and here

See the planetarium fight here and the followup here 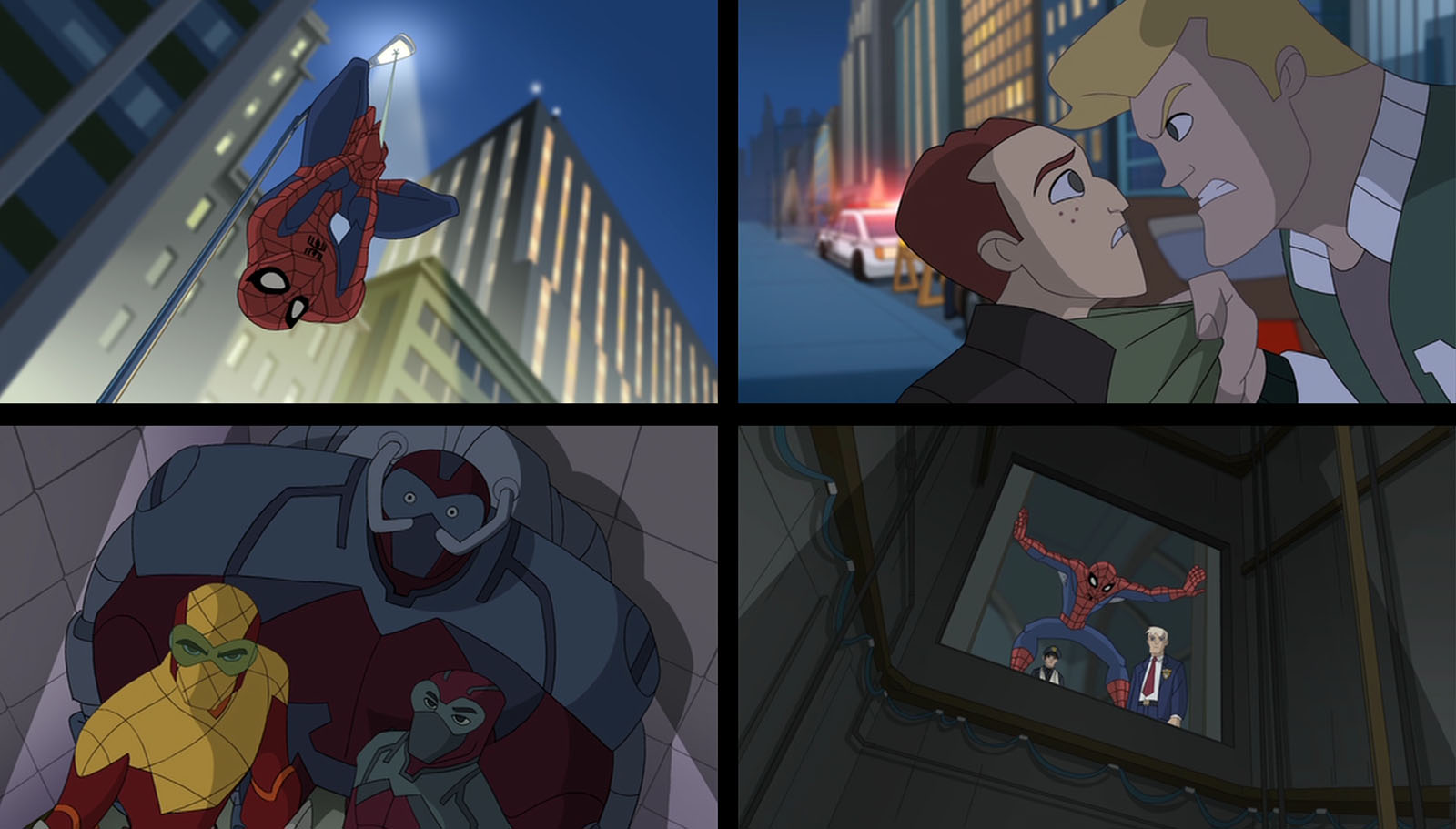 Friendships are tested and tensions rise as Peter and his classmates pair up for a night of police ride-alongs. Spider-Man must once again face off against the new Enforcers, consisting of Shocker, and an upgraded Ricochet and Ox.

I did a big chunk in the middle of this episode. As a freelancer you don’t get to see every script, so catching snapshots of the various relationships gave me a strong impression of all the character work that had been done over the season. Good stuff. 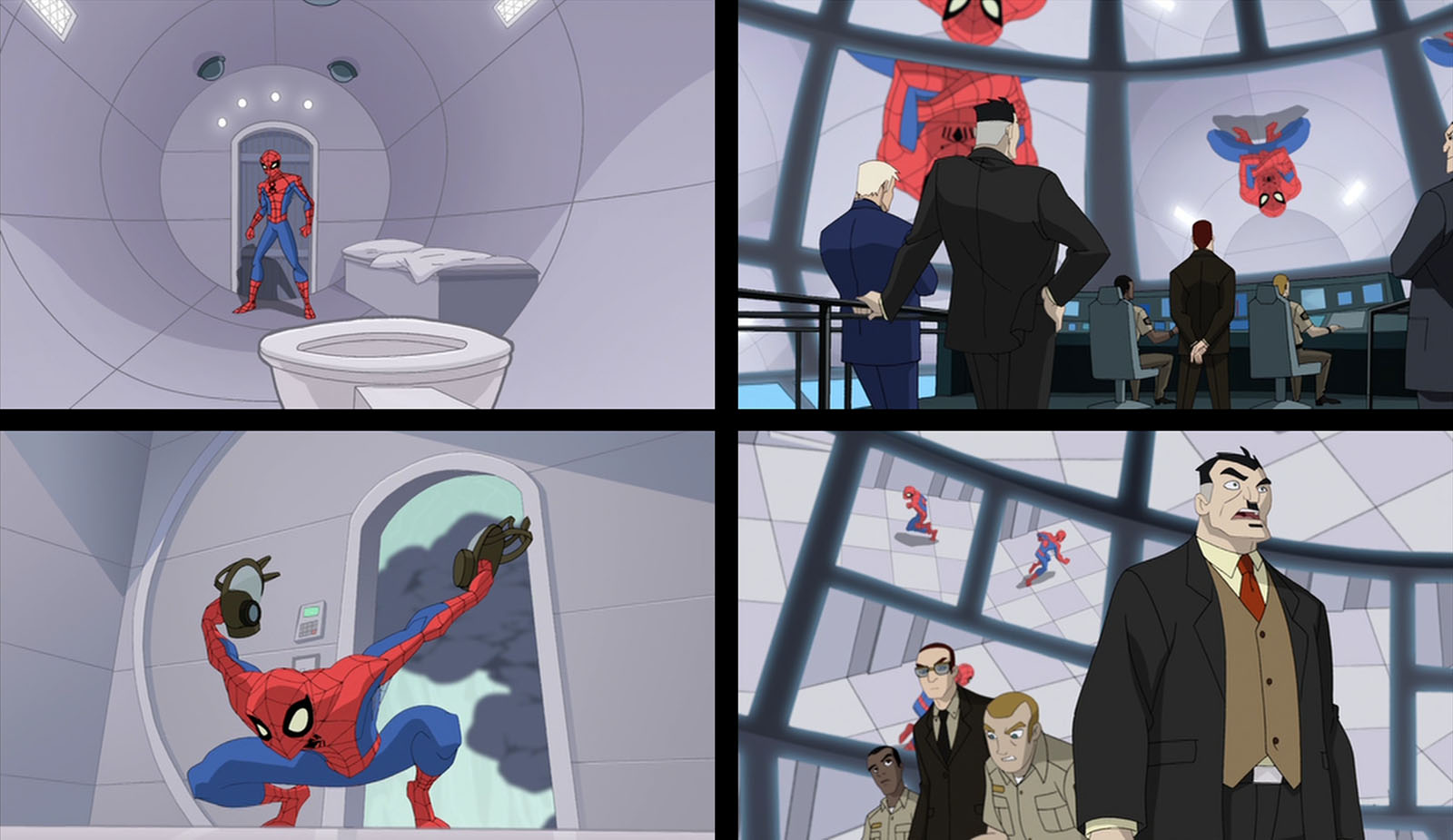 Spider-Man volunteers to test the Vault’s new security system. But when the system is hijacked by the Green Goblin, Spidey must face his old foes with Black Cat’s help. In the process, he learns a shocking revelation about Uncle Ben’s death.

I did the main part of the vault sequences, from the opening of the show to . It was my final storyboard of the series.

See it on Youtube in 8 segments. I did all the vault scenes through the start of segment 4 (ending in the elevator shaft).

Episode 1: Survival of the Fittest