When last we left the Shogun Warriors, they had put down a rampaging mob of giant robot dinosaurs and freed a planet from tyranny. If you don’t remember that, you must not have read it, because it’s unforgettable. C’mon, giant robot dinosaurs??? Go get yourself caught up with Part 1 (here) and Part 2 (here). Then you’ll be ready to have your mind truly blown by THIS, the senses-shattering RETURN of the Shogun Warriors!

I drew that brain-blasting finale of The Shoguns in 1978, then was amazed to learn that Marvel Comics would begin publishing their own version in early ’79. The stars would be Raideen, Combatra, and Dangard Ace. As previously reported, all three were stars of their own anime programs in the 70s, but I was unaware of this critical fact. All I knew was that they were incredible toys that I couldn’t afford. In my headcanon, they were cyborg space heroes with their own personalities and battles to fight.

When I actually read Marvel’s Shogun Warriors #1, it was a big disappointment. There, the Shoguns weren’t characters at all. They were giant robots driven by people. BOH. RINGGGGGG.

Believe me, I am now fully aware of the irony of that statement. Within the next five years, I would be transfixed by Japanese robots driven by people, and I’d never look back. Turns out it was entirely a matter of presentation. If I’d seen them that way on TV from the start, I would have accepted it as fact.

Anyway, finding the Marvel Comics to be a letdown, I stopped following them and rededicated myself to my space hero vision. In 1980, that decision begat three new Shogun comic book tales. And a few things had changed since my last outing. 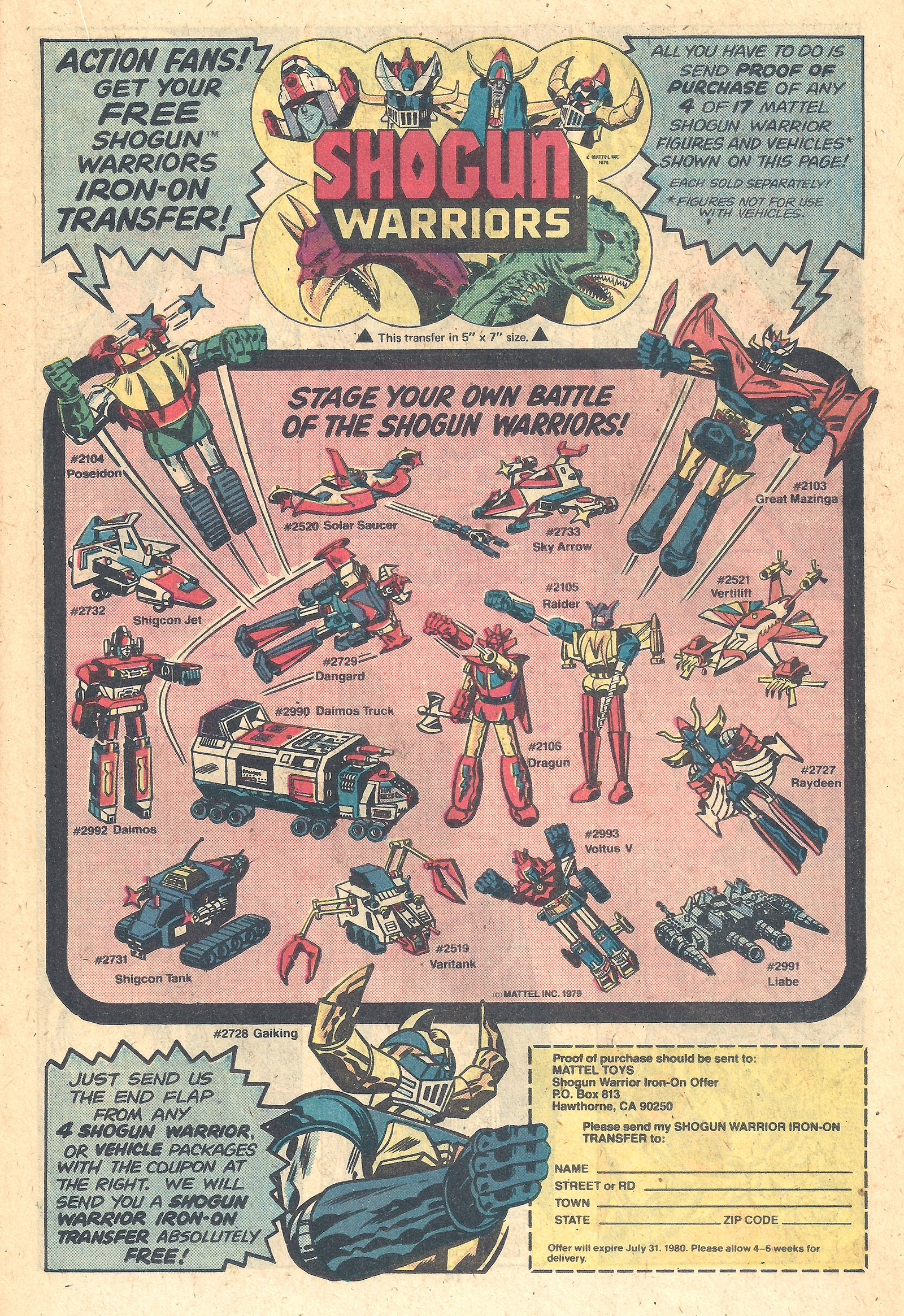 This ad appeared in Marvel comics dated November 1979, which went on sale in August. It was drawn by Herb Trimpe, the artist on the Shogun Warriors comics, and it absolutely enthralled me. I didn’t have money to throw around back then, so these images were as close as I could get to all those amazing toys. But at least now I had actual reference drawings instead of the foggy mental images I brought back from the store.

I’d started my Shoguns collection with the two model kits I described in Part 1, but that’s as far as I got. Every time we went back to the department store (on a grocery trip) I’d make a beeline for the toy section and drool over all the latest arrivals. Miniature action figures and vehicles aplenty. In the decades since then, serious collectors have written scholarly works on their geneology; which Japanese cartoon they came from, which Japanese toy company made them, all the packaging variants, etc. Such work is valuable, but it’s way outside the mindset this ad put me in.

The three stories I created in 1980 were The Guardians of Delphon, The Origin of Dragun, and another one that remains untitled and unfinished to this day. It is with profound regret that I cannot share with you The Origin of Dragun. He was the first Shogun I brought home, and that made him the defacto founding member of my cast. In his origin story, he starts out as a regular Earth guy who encounters a UFO driven by an intelligent computer. From this computer, he learns that a cosmic threat is on its way, and he offers up his body to be mechanized. This gives him the power to fight off the monster or whatever it was, but also compels him to leave Earth forever and join the larger conflict among the stars.

It was the most authentically emotional story I had yet written in my 15 years, and it pains me that I no longer have it. I probably gave it away to a friend, as I did with a few of my earliest efforts. At this point, only time travel can rectify that decision.

The good news is that the other two stories are only a click away. So let’s get going! There’s a war to fight! 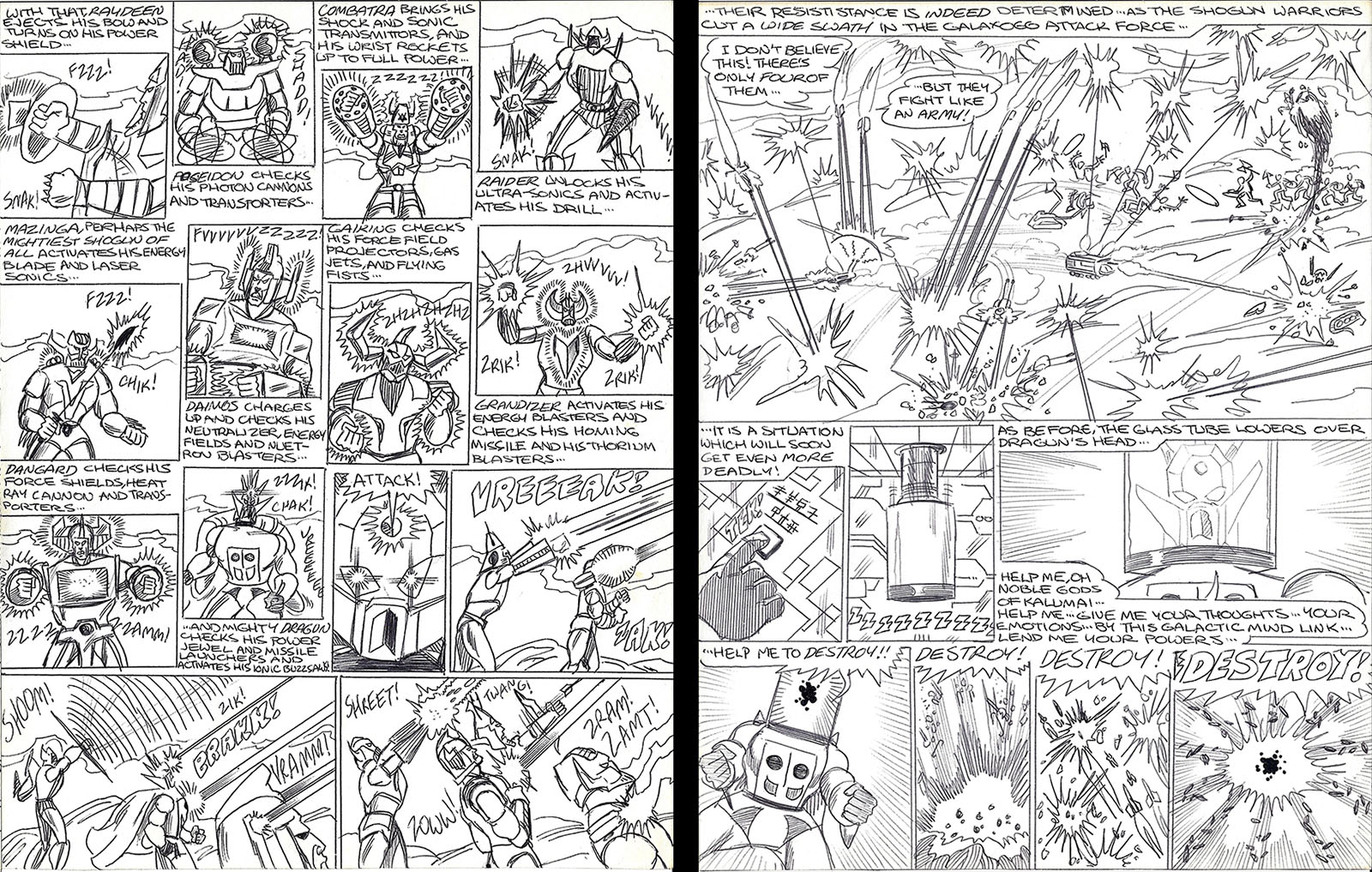 I got in the habit early on of writing down cool, SF-sounding names whenever I heard or read one. I kept a list for use in future stories. I still maintain it today. Whenever I need to name a character, planet, or whatever else, that list is ready to serve. As soon as I discovered the name “Delphon” I had to find a way to use it ASAP.

In this story, the Shogun team (which had gained four new members since my previous comics) takes damage and are forced down on a deadly planet teeming with giant enemies. The battles begin immediately, and only get crazier when the evil Zordius gets involved. Nothing was planned in advance, as per usual, so the plot is razor thin. But I did decide as the end got closer to make this the FINAL battle against their arch enemy. I even inserted a new page after the fact to build up more tension, a rare example of rethinking a scene after it was finished. And don’t miss the shocking – and completely unearned – ending revelation.

On the production side, this was my second attempt to use the John Workman lettering style that I first tried out on Splinter of the Mind’s Eye. I got a little better at it this time, reducing the points where word balloons merged into each other. Widening the panel gutters helped a bit. Of course, I was still cramming too much on every page, but I was also finding more occasions to enlarge panels for impact.

In addition, I experimented with tonal effects. I had no idea how they did it in the comic books I read (it was a revelation to later learn about screen tones) so I just did the best I could to imitate them by hand, with ruled lines and overlapping moire patterns. Lastly, Marvel’s Micronauts series was in its first year at the time, and Michael Golden’s art was a revelation. I swiped it at every opportunity. 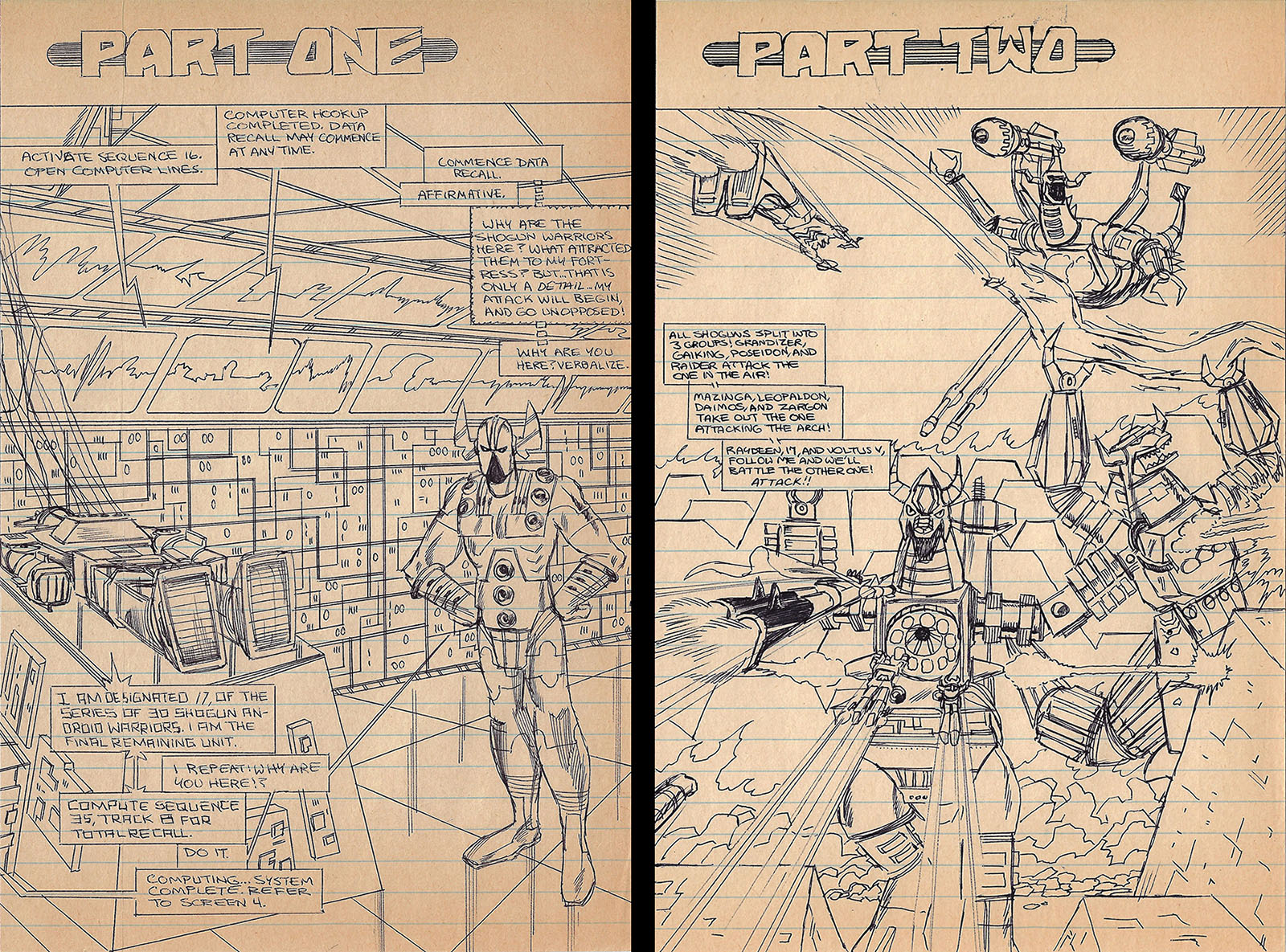 This was my last-ever Shoguns story, created in the fall of 1980. And it was an oddball. For reasons I can’t remember, I reverted to lined notebook paper. Maybe it’s all I had access to when I got started. Either way, it was the very last time. After this, I would get some actual for-real education in how comics were made, and it changed everything.

I’d seen some more toys and ads, and two more characters had been added to the lineup. One had the simple name “17,” so I figured he must have been a pure robot rather than a cyborg. The other had a sort of spider motif on his chest and was named “Leopaldon.” No other info, but he looked cool so I brought him into the fold.

Later I learned that unlike the previous Shoguns, these two came from the tokusatsu (live-action) world rather than anime. 17’s original name was Daitetsujin 17, and Leopaldon was a different beast altogether. His original name was Leopardon, and he could transform to sort of look like a leopard. He had a spider motif on his chest because he actually belonged to…Spider-Man. No joke, in Japan the live-action Spider-Man had a giant robot named Leopardon. It’s a good thing there was no way for me to see the show back then, or I wouldn’t have been able to think about anything else.

In terms of story, Zordius was no longer a threat, but I decided that he must have left a lot of generals behind – AND their giant monsters. So there was still plenty of fighting to do. Everything about this project was regressive, which is why I abandoned it before finishing. While it was in production, I was amazed to learn that the arts college in Grand Rapids Michigan was offering a weekly class called Comic Book Production, taught by an actual pro. My mom enrolled me without delay, and in the very first week I learned about all the things I was doing wrong. With this knowledge, it no longer made sense to continue this project.

In other words, I was about to take my first step into a larger world. More to come.

Mecha Design for the Untitled Adventure

Some of these were based on other exotic toys that showed up in catalogs, and they were so intriguing I just had to draw them. I later learned that they came from an Ultraman series. You see what they did there? Japan was invading head the whole time. 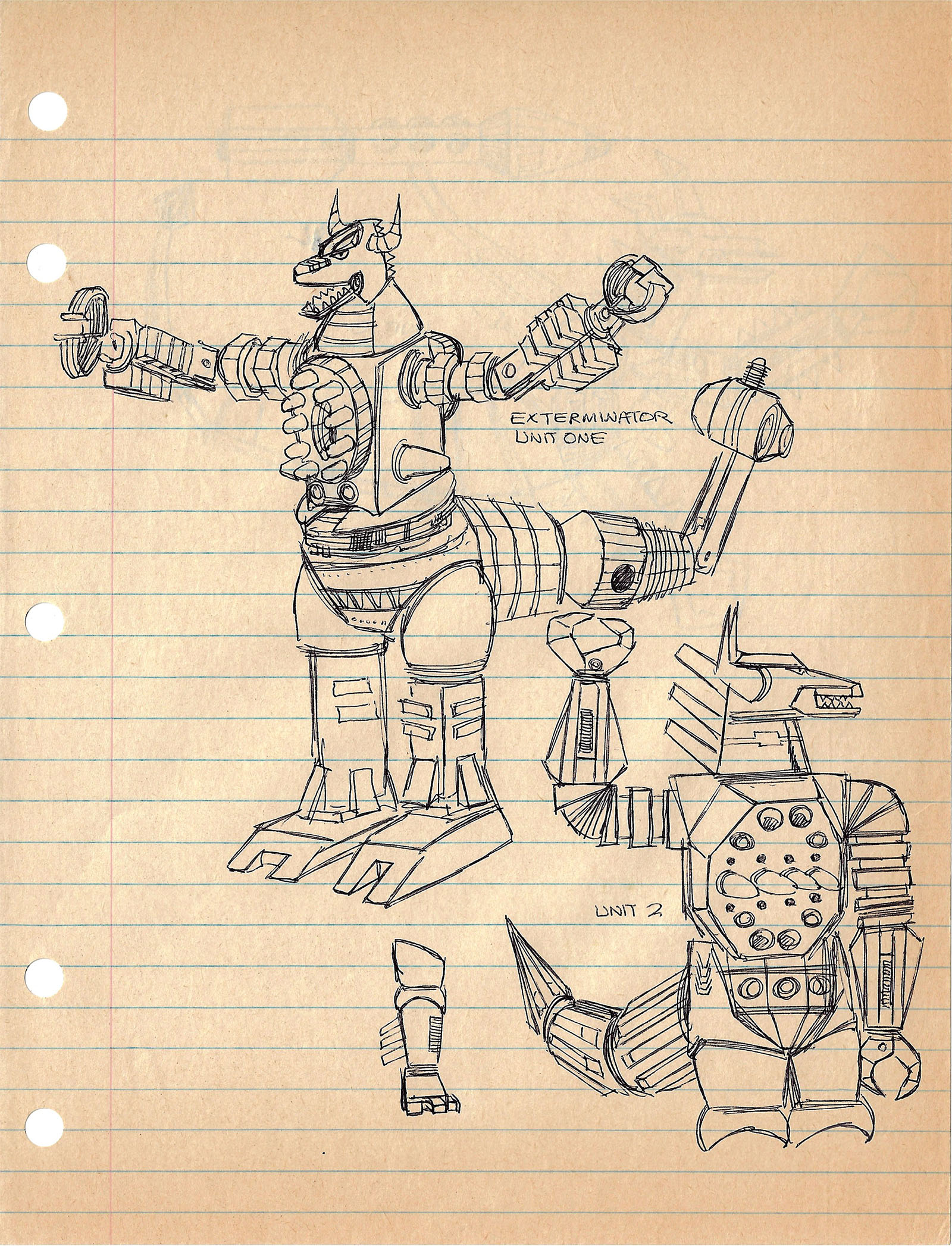 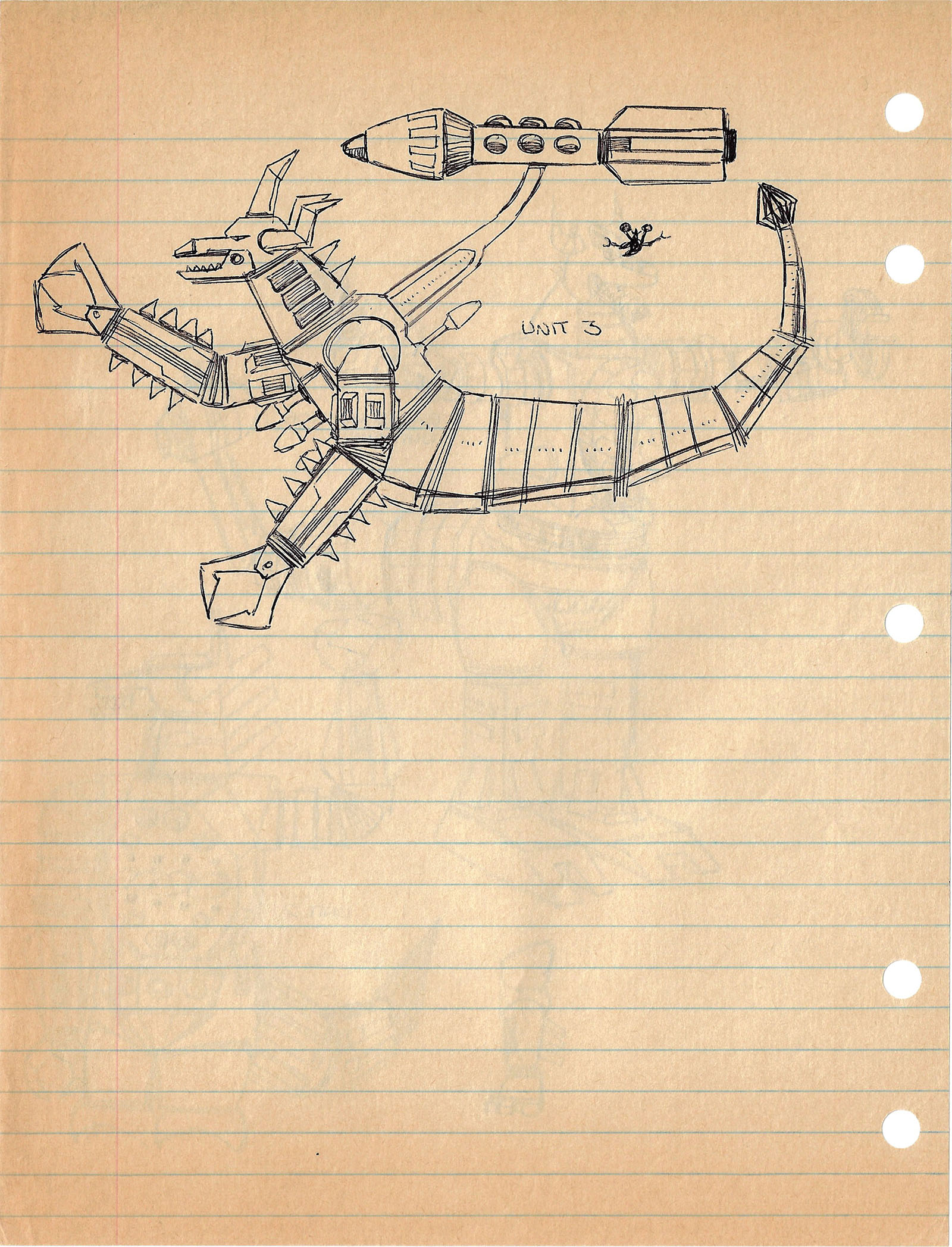 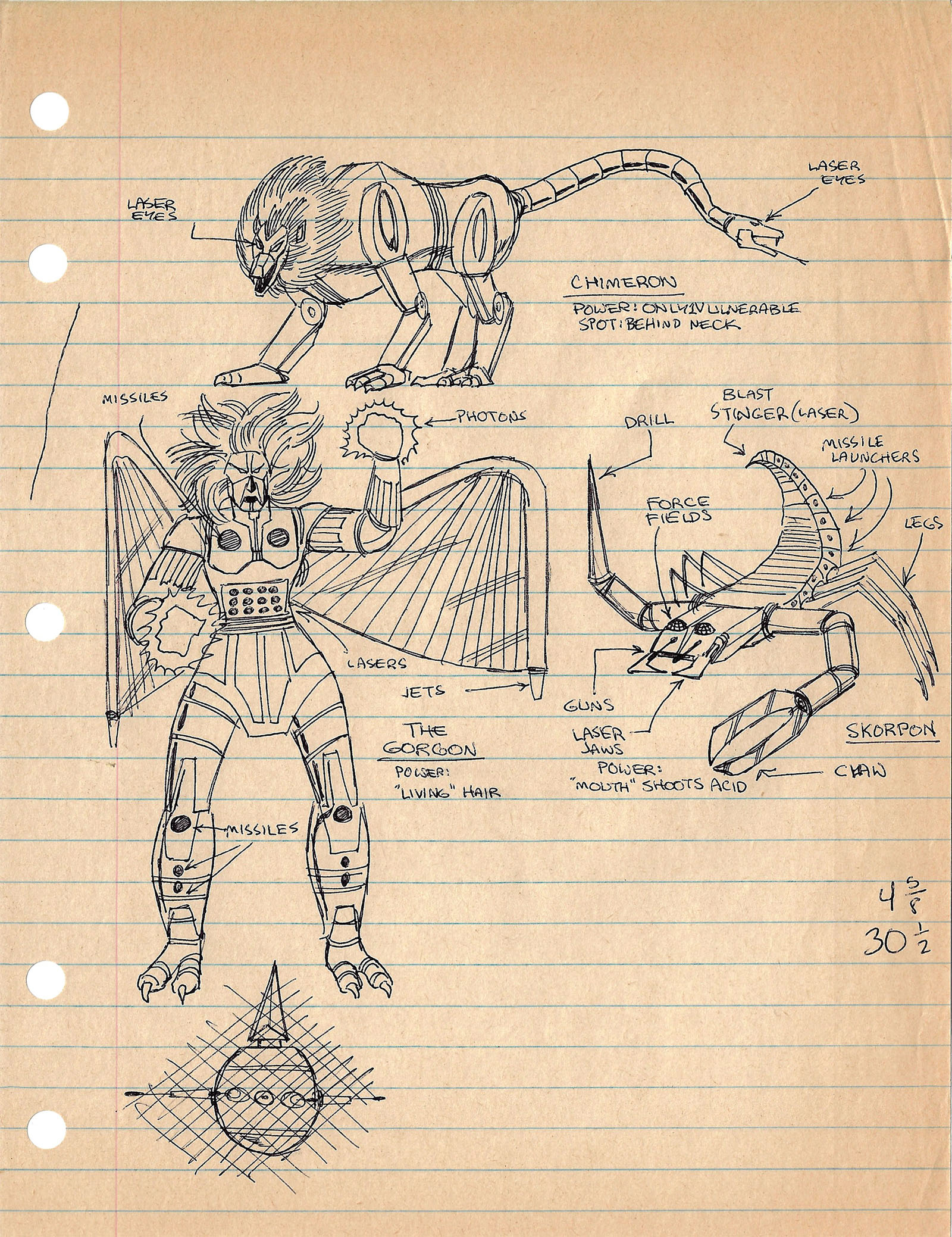 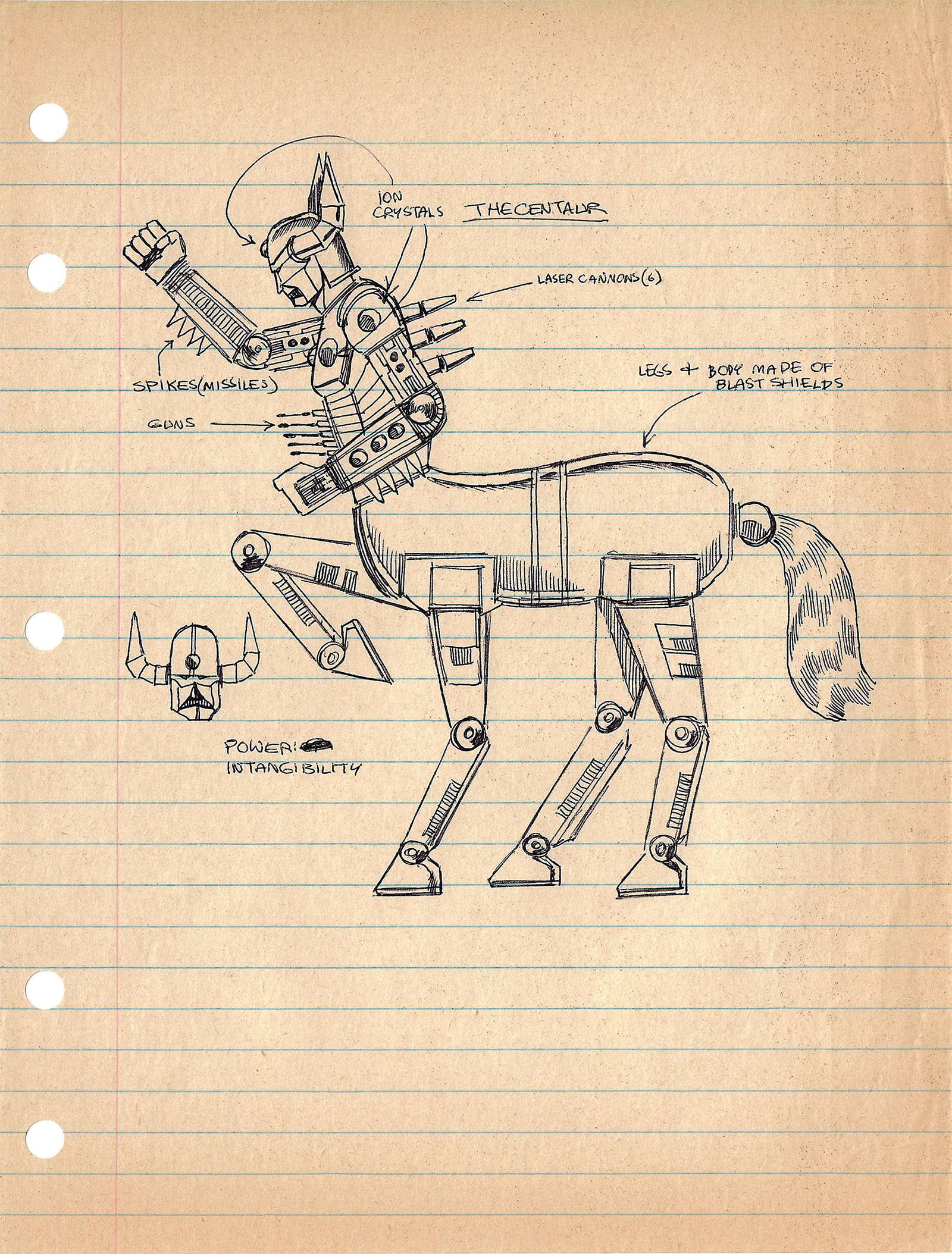 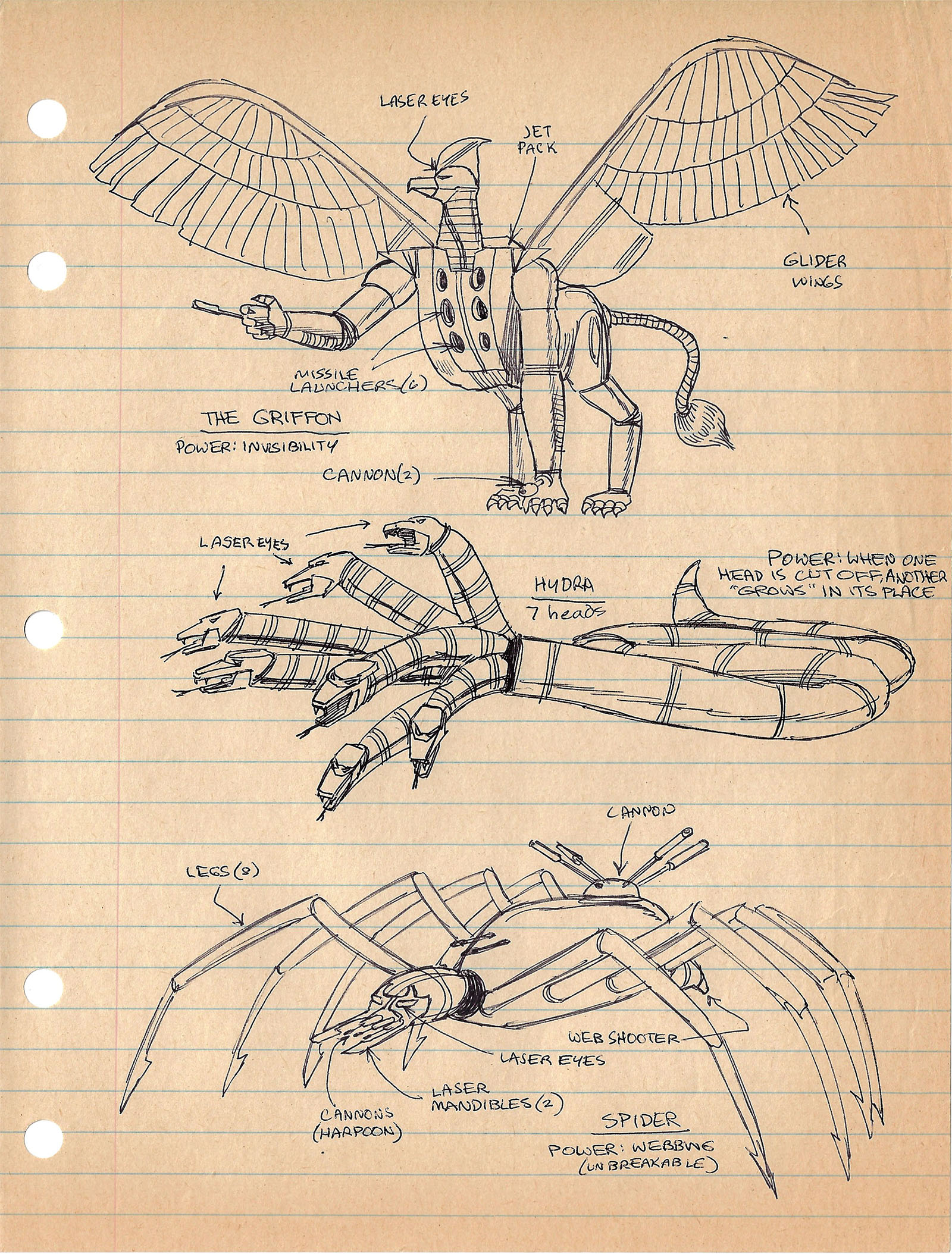