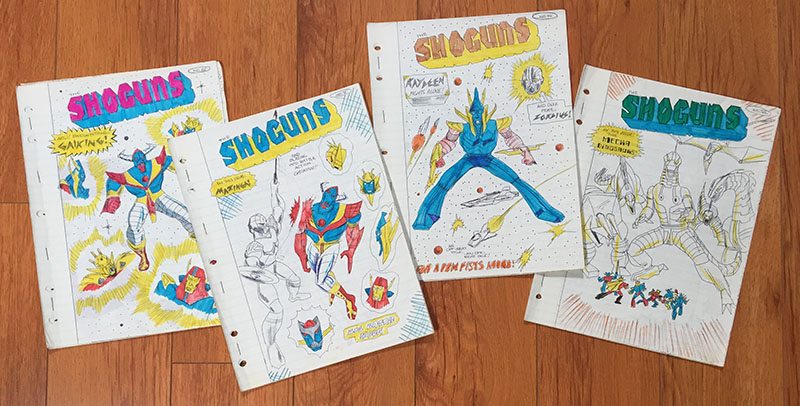 I made these comics at 13 years old in 1978, still drawing on lined notebook paper. (I would level up in ’79.) Shogun Warriors toys were still in stores and the line gradually expanded even as Star Wars toys finally arrived to claim their own shelf space. It was an age of plastic miracles.

The Micronauts were in that mix as well, having been around since 1976. Like the Shoguns, they also came from Japan. Unlike the Shoguns, they didn’t originate from Super Robot anime cartoons. New Shogun toys came in different sizes, including miniature figures with metal parts, and additional characters were joining the lineup. I never actually got any of these new toys, spending my microscopic allowance instead on comics and Star Wars.

I sometimes wonder how things might have turned out if I’d been surrounded by the stuff, like Japanese kids were. Would I still have gaps to fill with my imagination? Would all my creative energies have been redirected into something else? But there’s no way to rerun that experiment. All I can conclusively say is that I acted upon my inspiration, and I got a career out of it.

Now, prepare yourself to enter the mind of a 13-year-old boy who wanted nothing more than to capture the pictures in his head and share them with the world. 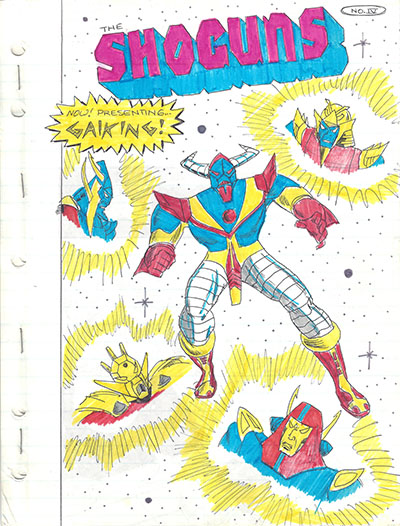 Gaiking was another toy you could get in the first year, originating from a 1976 anime series that got folded into Force Five for American TV. Interestingly, the popularity of The Shogun Warriors created a feedback loop that motivated the making of Force Five. But it didn’t air in my hometown, so that was someone else’s jam. At the time, my only reference for Gaiking was the toy I saw on a shelf, so my design only vaguely looked like him. I also thought his name was pronounced “Gay-king,” but that wasn’t the case.

The drawing discovery I made in this issue was the use of straight lines for screen-shading. I didn’t have much in the way of sharpies or markers, so I found a way to shade with my ballpoints instead. This led to the discovery of gradations and moiree patterns, which felt like magic tricks. 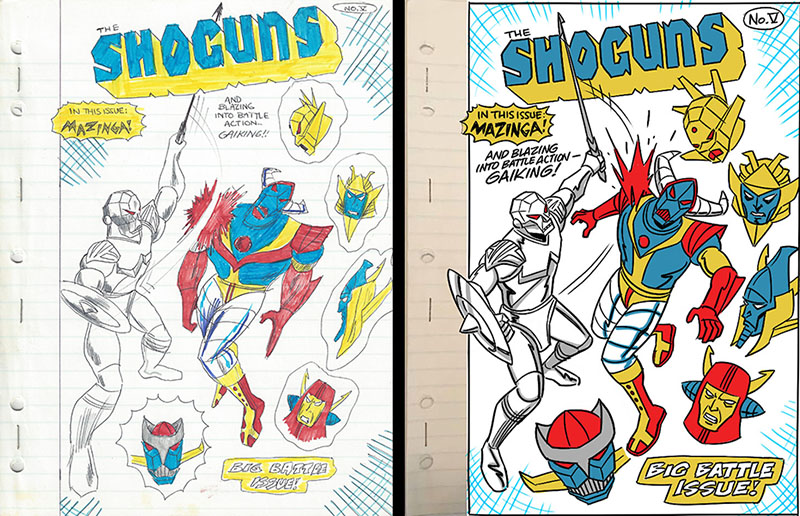 What makes these fun to remember was my complete freedom from writing scripts. Huge, critical plot points came to me on the fly. Can’t go back and redraw, just throw it in. In one case, I accidentally drew the villain too large in one panel and just decided, “Okay, he can grow bigger. I’ll go with it.” I needed a way to reveal that the villain was lying to everyone, so I just invented a crazy twist with no setup whatsoever. Everything you’re taught not to do. When a twist occurs to me these days, I lurch backward and revise the script before anything gets drawn. Oh for the days when standards didn’t matter. Also, I didn’t have white-out.

Then there was the arrival of Mazinga. He was part of the Shogun toy line from the start, but he always creeped me out with that big grill mouth so I didn’t bring him in earlier. Little did I know that his original name was Mazinger Z, and his 1974 anime series single-handedly launched the Super Robot genre. He just looked like a maniac, so that’s the role I gave him. He’s gotten multiple anime remakes and is now the Japanese equivalent of Superman. It took me a long time to accept the R (which I thought turned a perfectly good name into a weird descriptor), but I got over it.

As a bit of fun, I redrew the cover of this issue in 2016 just to see what image was actually in my head 38 years earlier. I kind of want to redraw all these comics like that now, with no other changes. 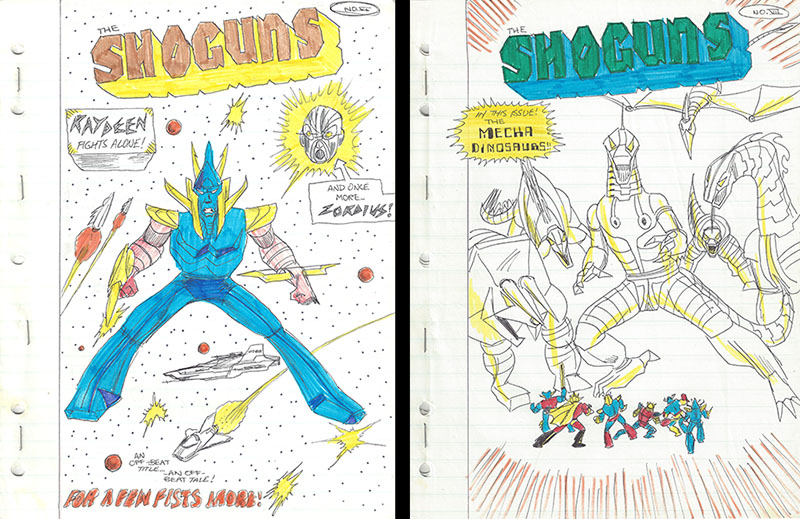 Story titles weren’t really my strong suit when I was 13. I’d usually pick something super obvious or swipe one that sounded cool. “For a Few Fists More” came straight from a 1975 issue of Marvel Team-Up. I had no idea what it meant, nor did I know that it was swiped from a Sergio Leone Western made the year I was born. It couldn’t have been less relevant.

I don’t remember what motivated me to give Raydeen a solo issue, other than the fact that I liked drawing him. I came up with the giant “Death Tank,” probably the most ridiculous mecha design in my entire history, with no planning or thought about how it worked. I also had Raydeen wipe it out very quickly with almost no effort, because sometimes that’s just how things go when you have the upper hand.

I appended the issue with a pinup showing off the mighty features of a Shogun character. When you’re 13, you are keenly aware of how little impact you have on the world. You respond by giving your heroes ultimate power to slash/break/destroy absolutely anything. You just never have them abuse it.

I teased a future Shogun named Orion. I called him that because his toy name was Poseidon, altered from Getter Poseidon, and I’d already given that name to Red Ronin, who was inspired by Raydeen. Confused yet?

For the last issue of this run, I swiped from myself. Before I started drawing Shoguns in ’77, I created an original comic called Battle of the Mecha-Dinosaurs. It was a crazy fight-fest in which two warring races, the Kree and the Skrull (maybe you’ve heard of them) build robot dinosaurs for a decisive battle that ends up destroying their entire planet, named Malthon. (MESSAGE!) I sure wish I’d held onto that one, because it was nutso.

Basically, I just did a replay of that story with the Shoguns. Anime robots fighting robot dinosaurs on an alien planet. I remember being so excited to see it play out that I just drew as fast as I could to get there. Did I mention I was 13?

That’s it for this round, but that certainly wasn’t my last foray into this world. More Shoguns and more stories were coming. You won’t miss a page, whether you want to or not! 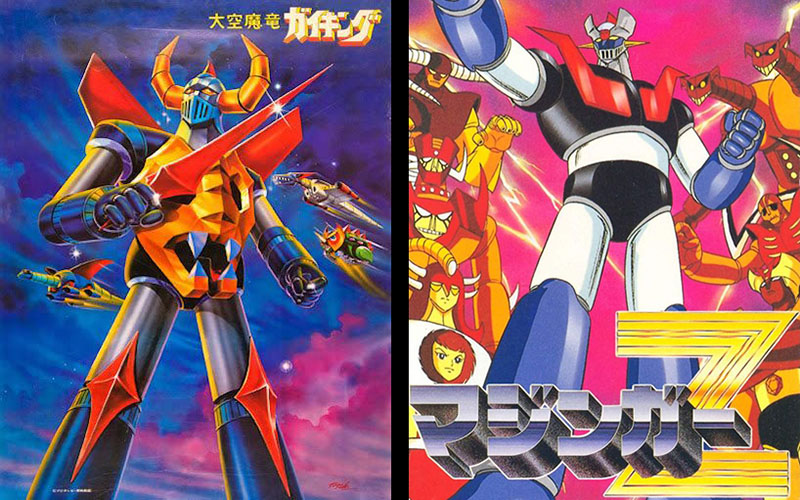 Original versions of Gaiking and “Mazinga” in Japan. Things would have been different if I’d known back then.