Looking back now, it’s like my head was secretly invaded and conditioned for everything yet to come.

Today, I’m a huge anime and manga fan. Back in 1977, I didn’t know they existed. But evidence was closing in around me. I thought it was my plaything. But I was the one being played.

(That sounds ominous, but really it turned out fine in the end. I just like the implied drama.) 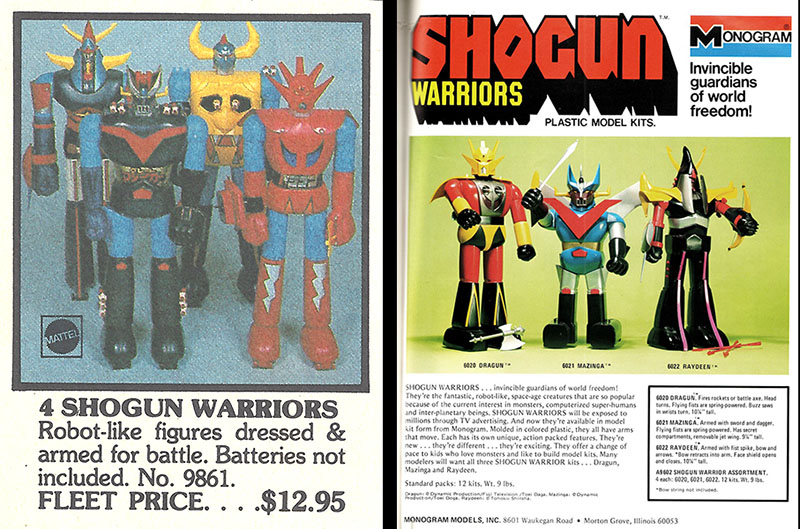 In the glorious summer of 1977, the Star Wars phenomenon didn’t roll over me alone, it awoke a hunger across the world. Every kid’s imagination was fired up, and they wanted Star Wars toys to play with. Due to staggeringly dumb oversights, nobody was equipped to meet the demand. If you ran a toy company, you would have been desperate for something ready-made to dump into the market and feed that ravenous hunger. If you were lucky enough to have business partners in Japan, you knew exactly where to get it.

Anime, particularly the genre we now call Super Robot Anime, was thriving in 1977, ignited by a 1974 series called Mazinger Z. Practically overnight, every studio created their own super robot cartoon to chase after Mazinger viewers. Toys and models followed by the truckload and Japanese kids ate them up. Watching the anime made them want the toys, and playing with the toys made them want to watch more anime. It was a self-perpetuating circle that widened with every new series.

I, of course, knew nothing of this. All I knew is that when I was a geeky 12-year old with a head full of Star Wars, sci-fi, and Marvel comics, these amazing, huge toys (from Mattel) started showing up in stores. They had innovative designs, spring-loaded weapons, and what looked like alien graphics printed on them. Many years later I learned that I had seen the cream of the crop, oversized action figures called Jumbo Machinders, and the exotic writing on them was Japanese. Small wonder it appealed to me; what I took for a graphically-complex alien language made of intriguing pictograms was in fact an Earth-based language made of intriguing pictograms. I still enjoy staring at it today.

The brand name for this line of toys was equally arresting: Shogun Warriors! That name locked them right into my sweet spot and made me an instant fan. 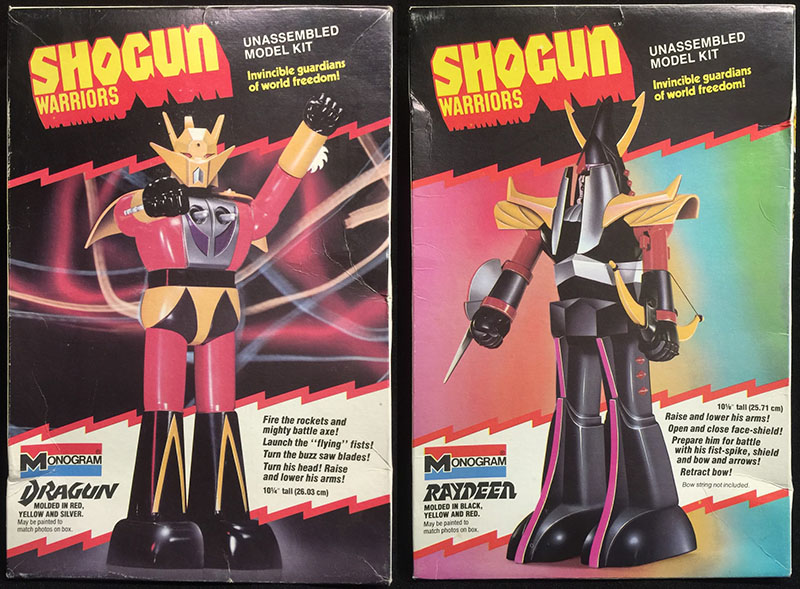 These giants were all way out of my price range (13 bucks? Come ON!! Even if I saved a dollar a year for my whole life I’d STILL be short!), but some of their smaller cousins were within reach. Some of the same figures were available as model kits from Monogram (a Mattel subsidiary), and that gave me my entry point. There were three to start with: Dragun, Mazinga, and Raydeen. Dragun was the one I liked most, so that’s the one I bought with my meager allowance money.

I took him home and started building him (not a challenge at all), and that’s the moment my head was secretly invaded. This Dragun guy didn’t seem to have any story or background behind the Mattel slogan “Invincible Guardian of World Freedom,” so I came up with one. Dragun was a space hero, fighting against space villains. He would be the first of a space hero army, and his mission was to go off and find others to join the fight. 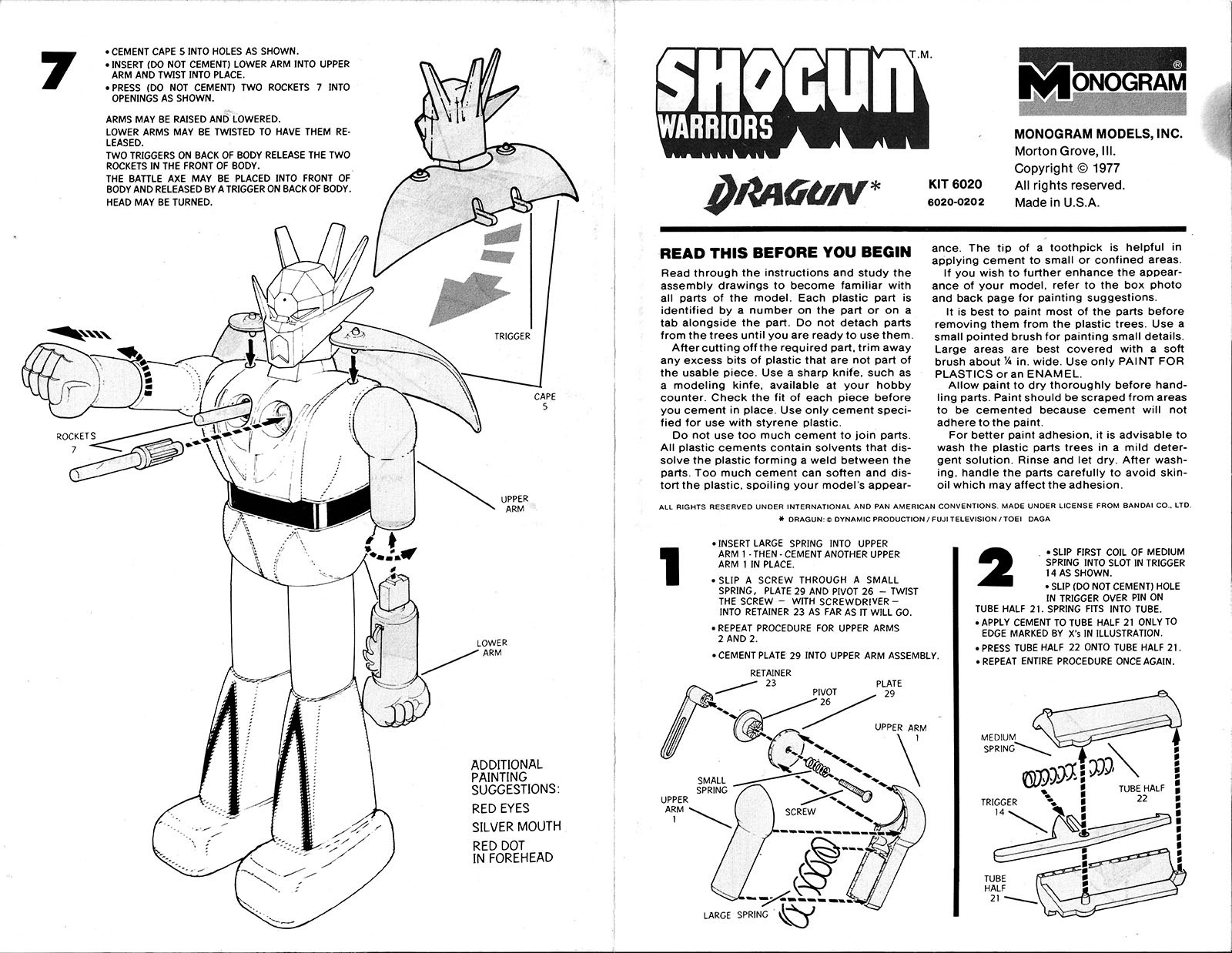 I was completely unaware that “Dragun” absolutely had his own story. His real name was Getter Dragon, and he originated in a 1975 anime series called Getter Robo G. He was one of a team of three super robots; the other two were named Getter Liger and Getter Poseidon, and they were all piloted by humans. The popularity of the Shogun Warriors toys later led to Getter Robo G being imported and renamed Starvengers, but it never found its way to me.

As far as I was concerned, Dragun was a character in his own right, a spacegoing adventurer who fought villains and monsters, and all the other Shogun Warriors were the same. In fact, it was a letdown to later learn that these weren’t sentient characters at all, just robots piloted by humans. It made them less interesting to me. But that would all come later. For now, we are firmly anchored in 1977 and 12-year-old Tim Eldred is about to create a story for The Shogun Warriors. 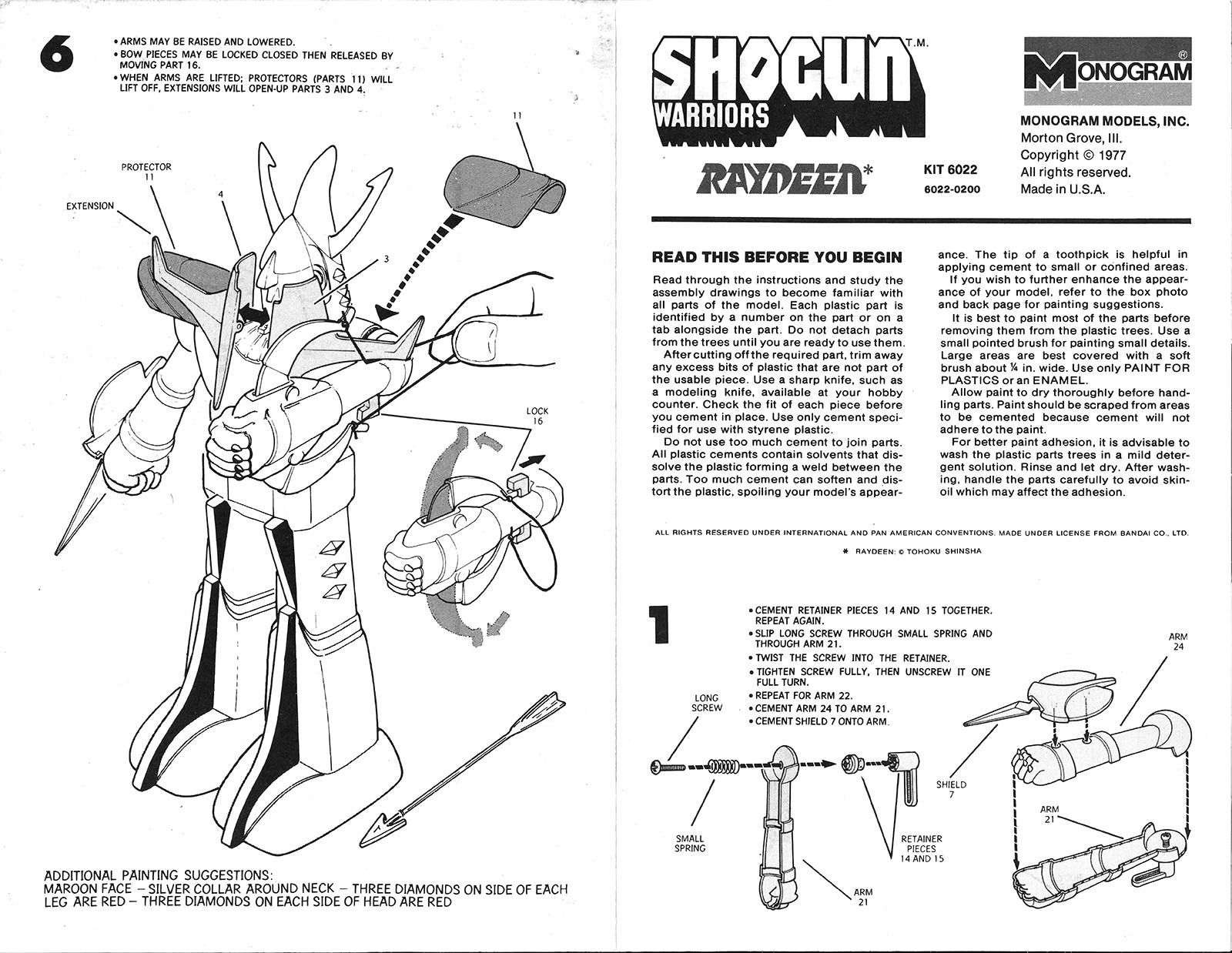 Shortly after building Dragun, I went back and got Raydeen (originally the title robot of his own 1976 series Brave Raideen). Where Dragun was thick and blocky, Raydeen seemed cool and mysterious with a sort of Egyptian Samurai look. When I stood the two models next to each other, I saw them as partners. In my headcanon, Raydeen was the first ally Dragun found on his quest because he was the second model kit I bought.

That was it. That was everything I had figured out when I sat down to make my own Shogun Warriors comic book. I shortened the title to The Shoguns since Warriors was too hard to hand-letter in a logo over and over. Over the next couple years, I created seven issues and then went on to do longer-form stories. The first three issues are presented here and the others will follow.

If you’re a fan of 1970s Super Robots from Japan, forget what you know about them. If that world is opaque to you, there’s nothing else you need to know. CHARGE!!! 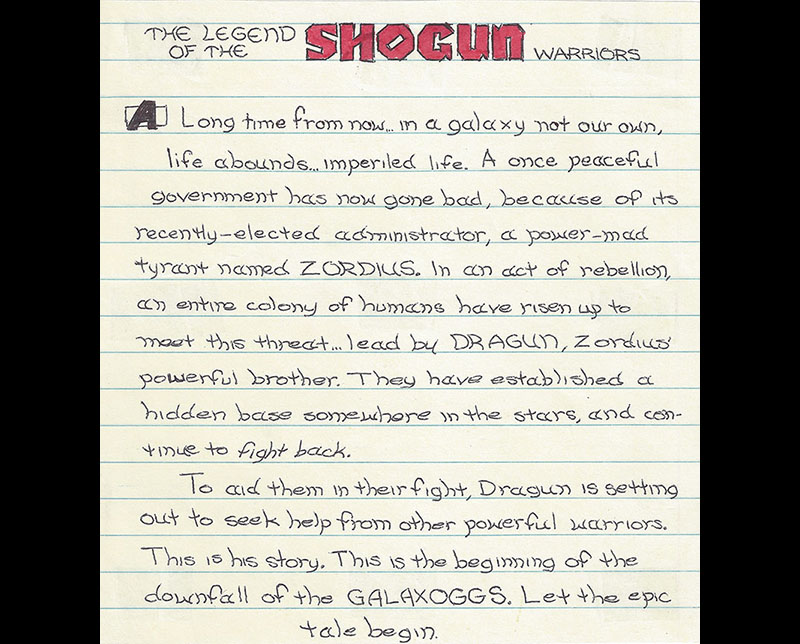 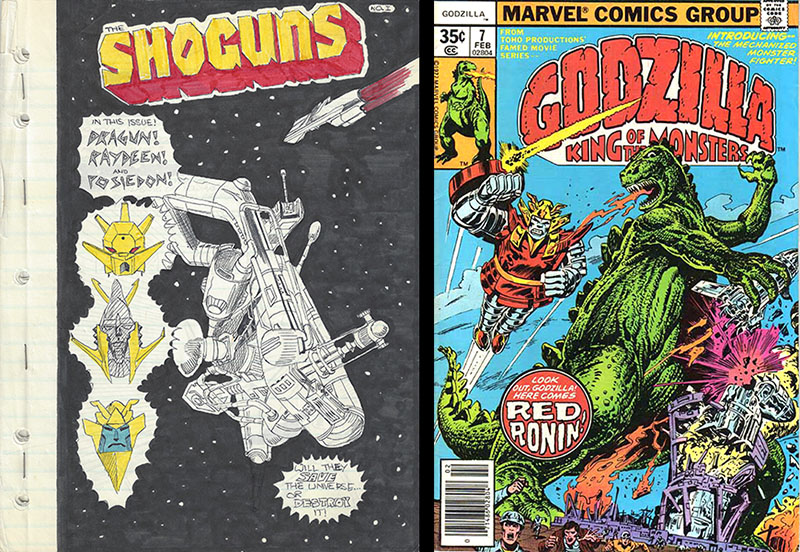 What strikes me most when I go back to comics I made in 1977/78 was how liberally I swiped from everything in sight. General verbage was grabbed wholesale from Marvel comics and plugged in wherever it was useful. The big space station on the cover belonged to Galactus. The main villain’s name, Zordius, came from a Darth Vader knockoff Halloween mask. His evil army was named Galaxogg after an alien in a Monster Machine set. If I tried to make money off this, it would have been criminal. But I was a preteen kid trying to scale a mountainside. Any handhold would do. (I’m still on that mountainside today, but I’ve figured out how to make my own handholds.)

Dragun and Raydeen, of course, were based on the model kits I bought. Poseidon was based on Red Ronin, the giant robot in Marvel’s Godzilla comics. (You better BELIEVE I bought every issue and still have them!) Ironically, as stated by the writer of those comics, Red Ronin itself was “inspired” by Raydeen. At least we were all drinking from the same well.

Like the Star Wars comics I was making at the time, my bane was a lack of magic markers to fill in the black areas, definitely a handicap in outer space. 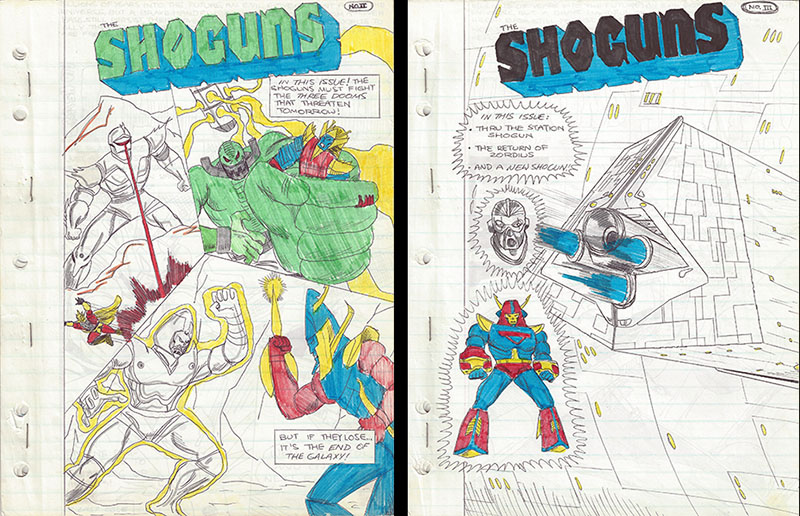 Again, obvious name-swipes in this one. The “Three Dooms That Threaten Tomorrow” were all villains from another Marvel comic I had read. Honestly, it could have been any Marvel comic. I don’t really do sound effects in comics these days, but back then I was crazy for them, using them when they were entirely unnecessary. Maybe it’s a law of nature that you have to get a certain number of sound effects out of your system before grown-up readers will take you seriously. If so, these early projects sure got me through that phase.

Creating these comics gave me an early start on learning to tell stories with multiple prominent characters. To give them all equal time, you have to figure out how to serve each of them individually without losing the group dynamic. Since I was a preteen kid, I knew practically nothing yet about how to create and depict a personality, let alone a growth arc. To be completely honest, these characters all had the same personality, if it could even be called that.

Regardless, once you split them up you take on the responsibility of giving each character their own time in the spotlight. When they come back together again, you need to feel that they moved forward together. That is exactly what I later had to do over and over as a director of TV cartoons with a team of heroes like the Avengers. Without knowing it, I started training for that complex challenge right here with these comics.

After spending issue 2 with the main three Shogun heroes, it was time to introduce another one. Combatra was another Shogun toy you could get, renamed from yet another anime super robot named Combattler V. I didn’t buy that one and didn’t have much reference to go on (probably just my own memory from seeing it in stores), so my design strayed quite a bit. If I’d given him a different name, he would have been unrecognizable. Which, ironically, was common practice in big-time superhero comics.

As you read this one, don’t get too hung up on the individual motivations. I made it all up one page at a time and, except for the heroes, everyone was pretty much a jerk to everyone else. This was the first time we saw the army of humans on the “good” side of the struggle, and I started thinking about who or what the Shoguns actually were under their armor. Dragun wore a helmet, but the other three had exposed faces, so they had to be at least partially human. I settled on the idea that they were super-powered cyborgs and left it at that.

A while later, I did a comic that went back to the beginning and featured Dragun’s origin as an Earth man called into service after his family was murdered. He gives up his humanity to become Dragun and saves Earth. Unfortunately, that’s the one Shogun story I can’t find anywhere in my files now. Which is a shame, because I was a better writer by that time.

The original Super Robots that became the Shogun Warriors: Getter Dragon, Raideen, and Combattler V. There were many more, and they all joined the party in issues 4-7! Read them here!

The Rise and Fall of the Shogun Warriors (Youtube)