Back for more! Here’s the second set of political cartoons from my days working for Cadence, a locally-based newspaper in East Grand Rapids, Michigan. The paper’s editor-in-chief Susan Lovell was the originator and I was her art monkey.

Back up to Volume 1 here. 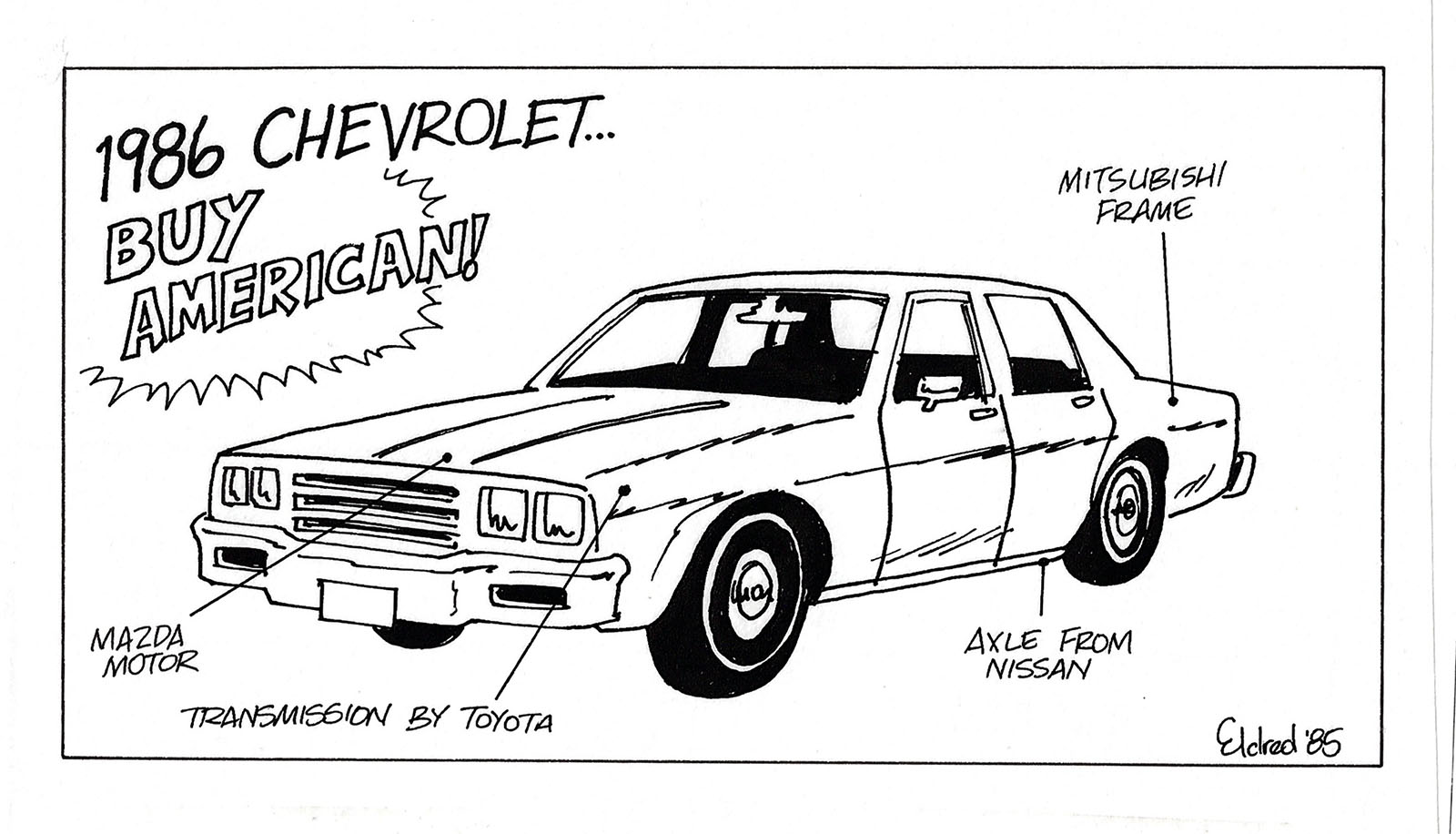 In the mid 80s, America was beset by a corporate-driven propaganda war against the incursion of Japanese imports, because yelling was easier than self-improvement. I drove a Nissan Sentra, which made me one of the traitors. 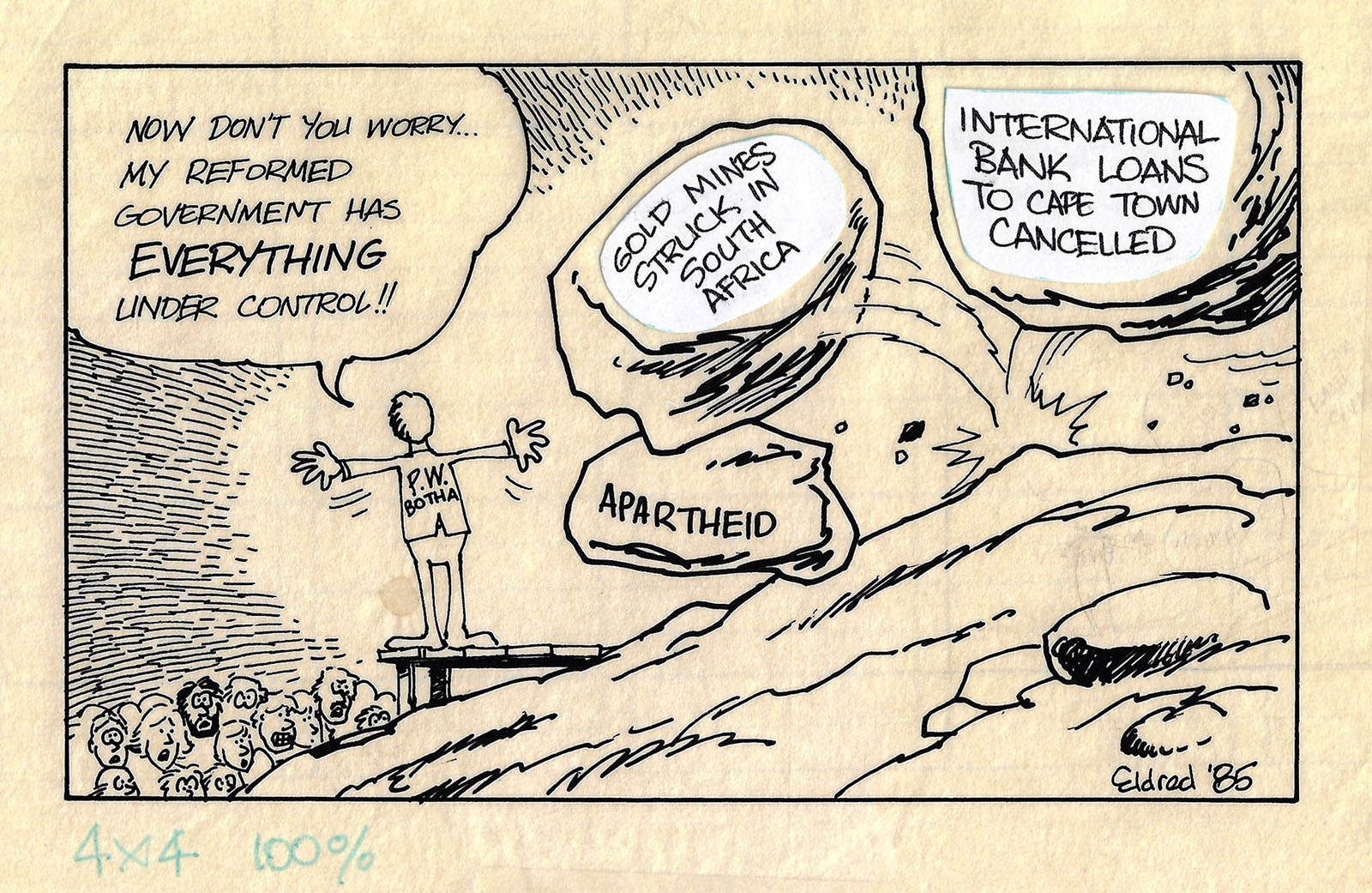 I was mostly ignorant of the South African situation at the time I drew this, but the act of drawing these cartoons introduced me to many such things. When the word “apartheid” came up with increasing frequency afterward, I now had a clue what it meant. 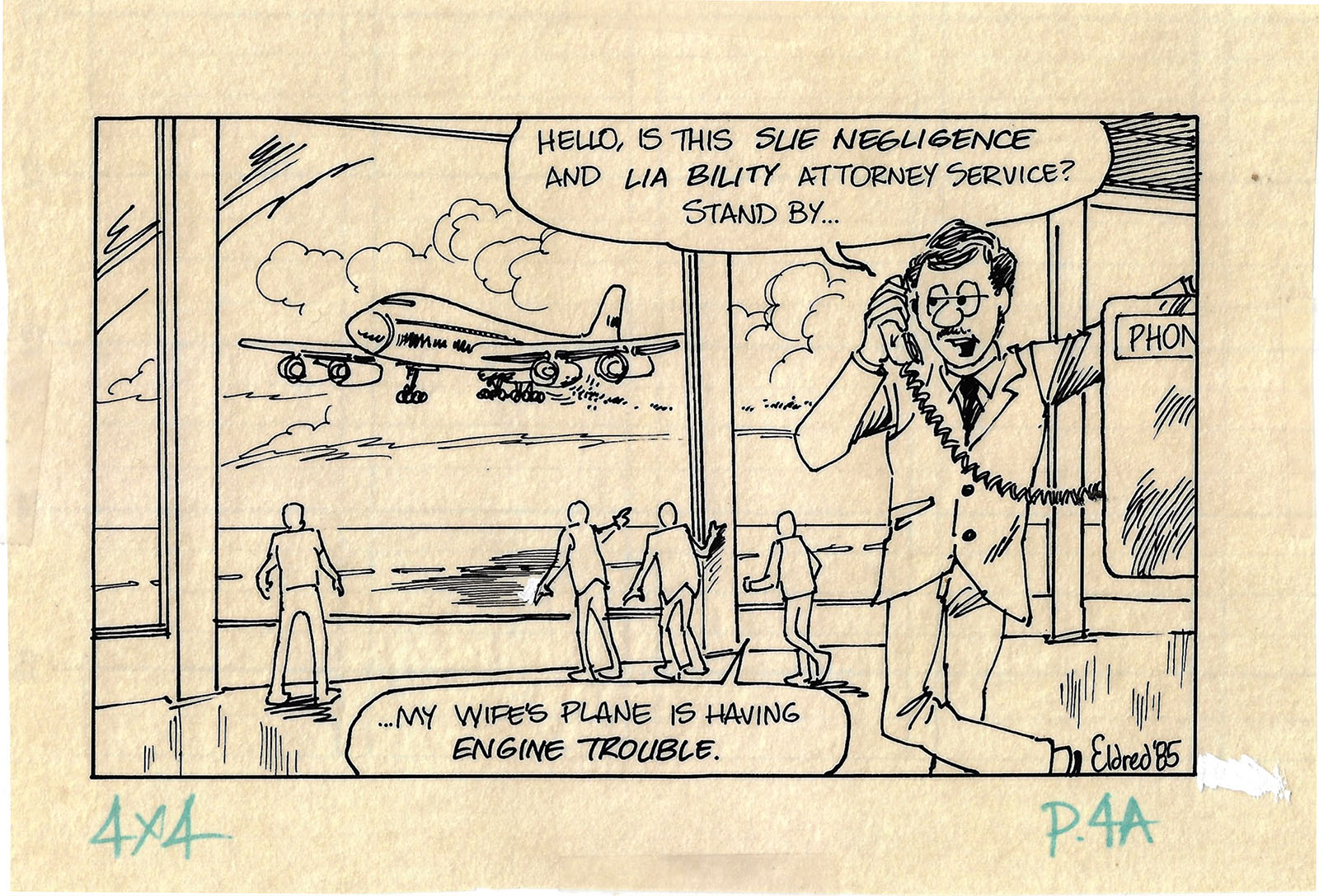 A comment on the rising phenomena of frivolous lawsuits and ambulance-chasing lawyers. Glad we got that sorted out. 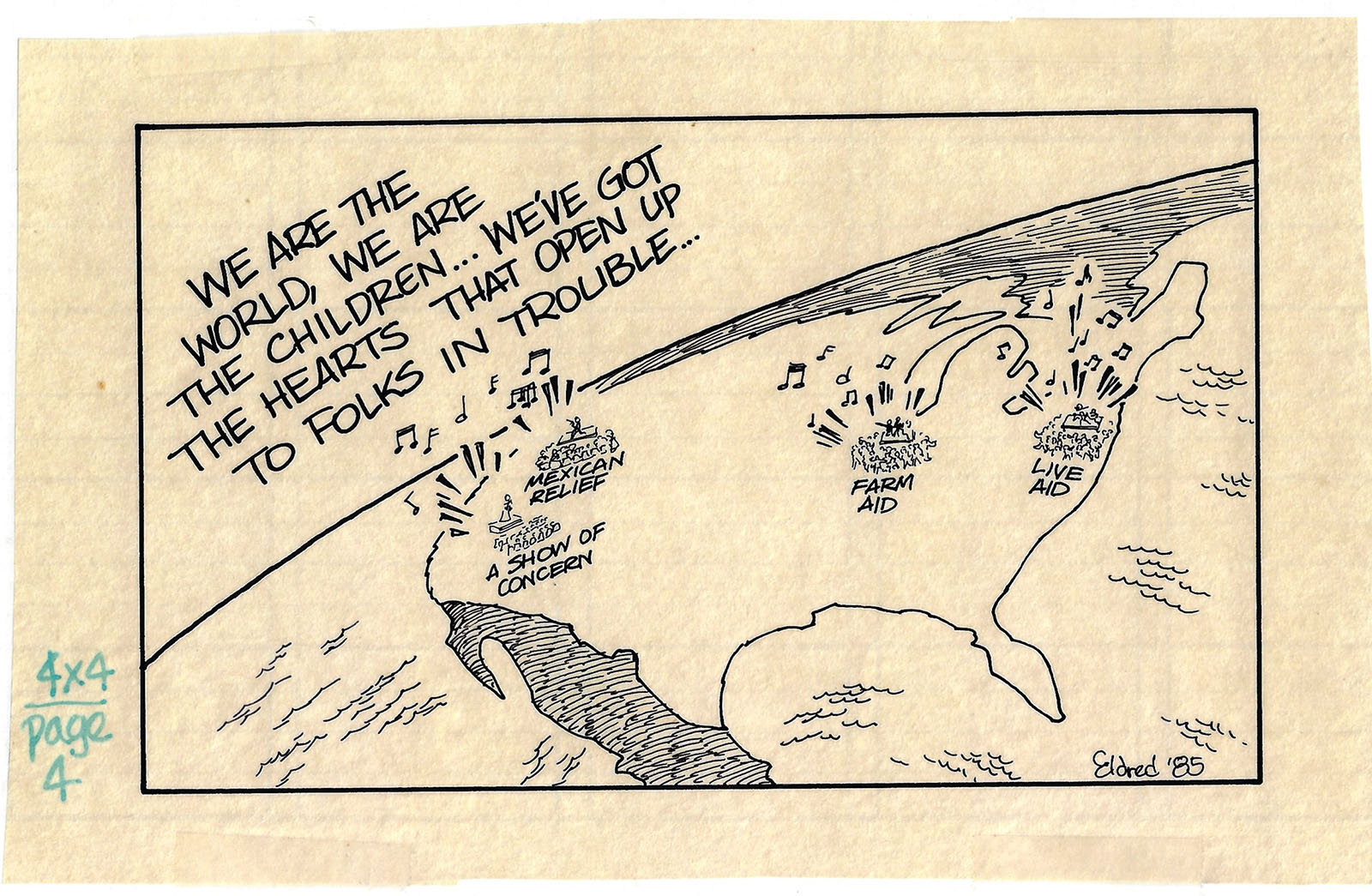 1985 was the inaugural year of giant, well-meaning benefit concerts. Sorta seems like we could use some more of them once we’re out from under the Corona cloud. 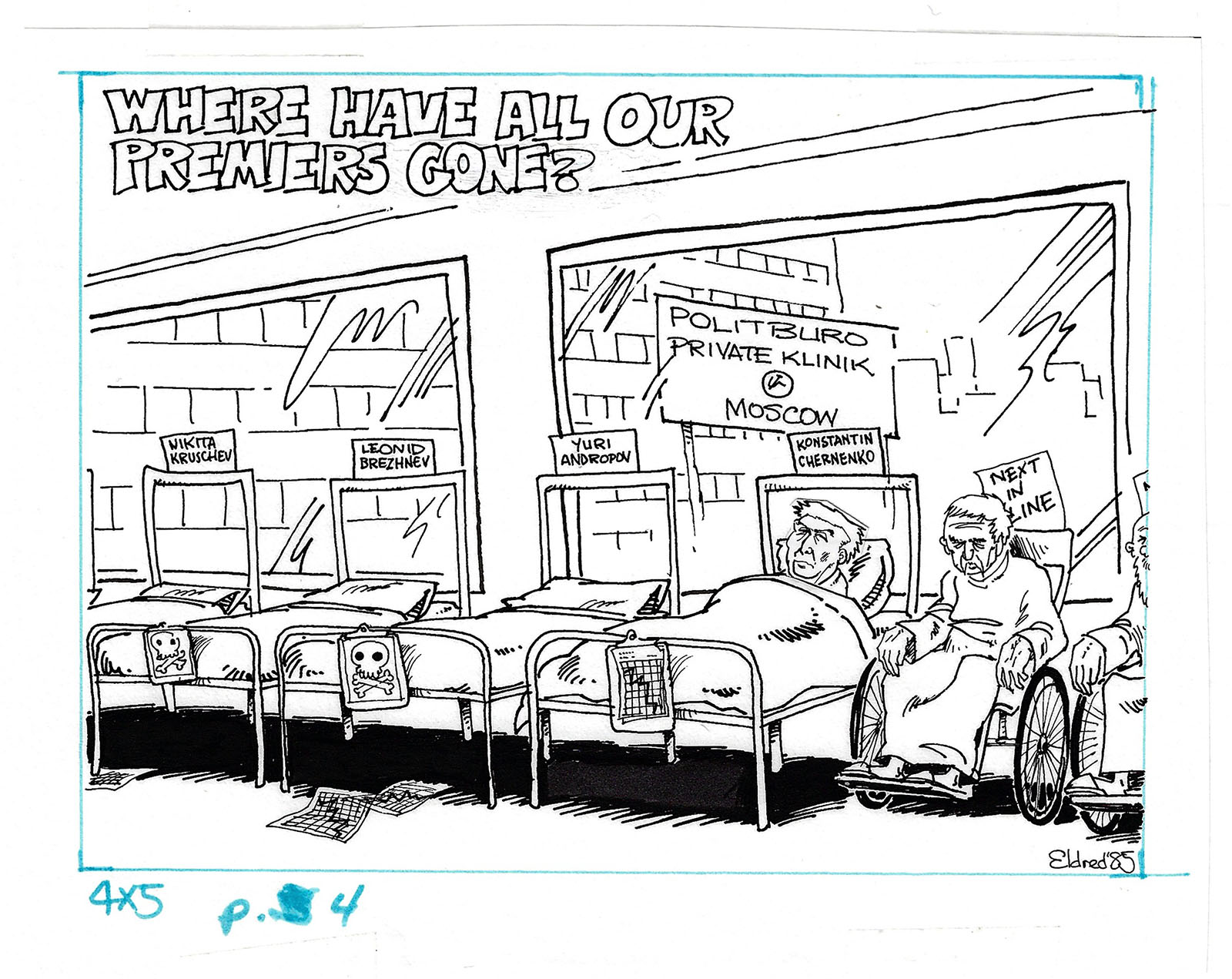 A snapshot in time. The “next in line” actually turned out to be Mikhail Ghorbachev, which nobody saw coming. Would be nice to get the next Gorbachev into office, ASAFP. One thing I strongly remember about this cartoon is that, prior to the Google Age, it took some work to look things up. I didn’t know for certain if the proper spelling would be “premier” or “premiere.” After several dead ends, including a call to a local library (just imagine that), I made my own choice. Fortunately, it was correct.

This one marked Cadence‘s 10th anniversary, showing the four women who founded the paper together. Editor-in-chief Susan Lovell is third from left. None of them had really aged that much in those ten years, but this drawing might be accurate now.

Tax fraud! Even back then!

This story was about a sketchy religious cult that set up shop in Oregon and – surprise – turned out to be all full of criminals. Read an account on Wikipedia here. 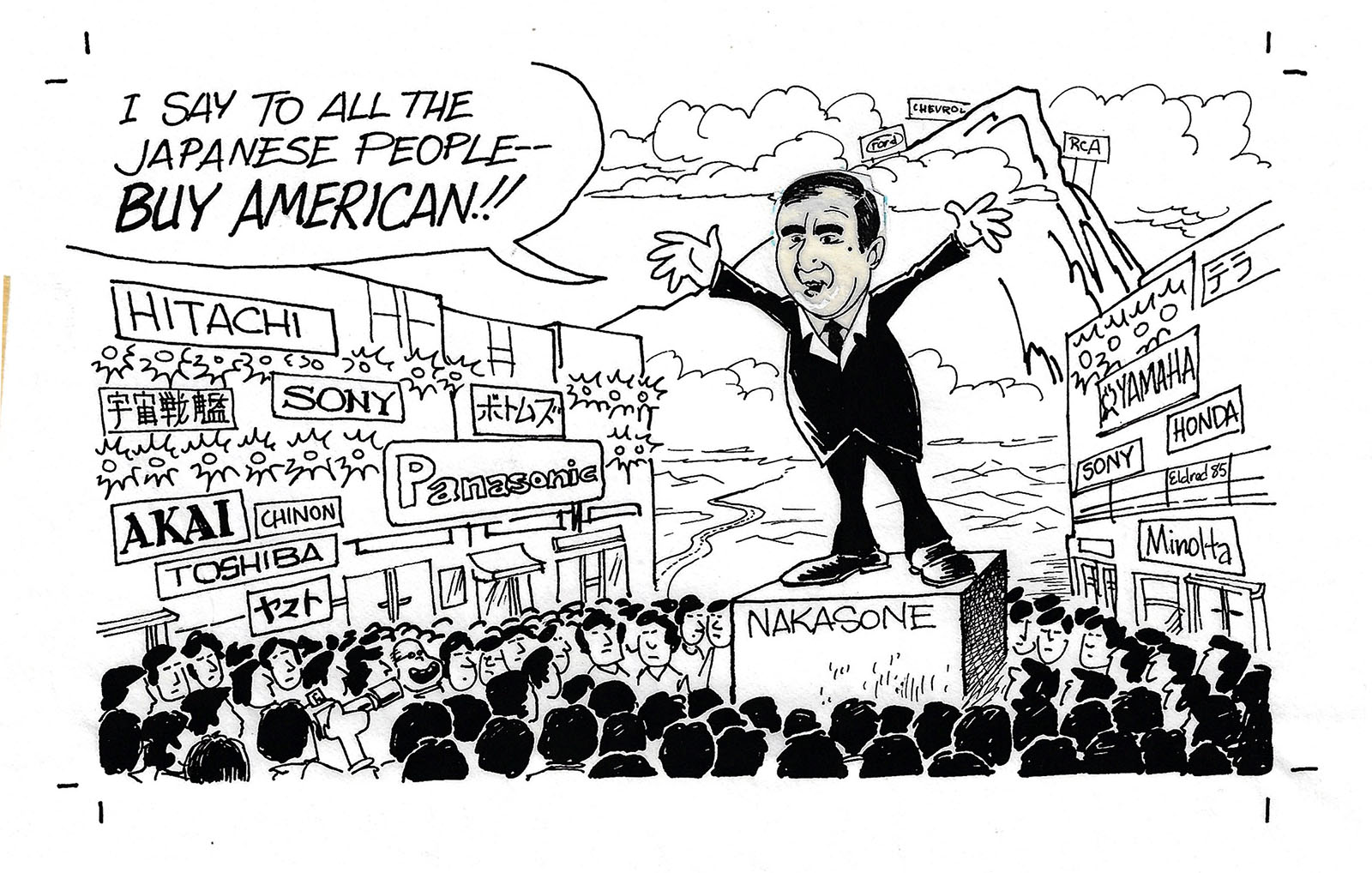 Japan’s Prime Minister Nakasone, under pressure from the US government, made a token effort to get Japanese people to buy more American products. Didn’t work out too well. Anime fans might spot some Easter eggs I planted into this one. The editor-in-chief at Cadence certainly didn’t. 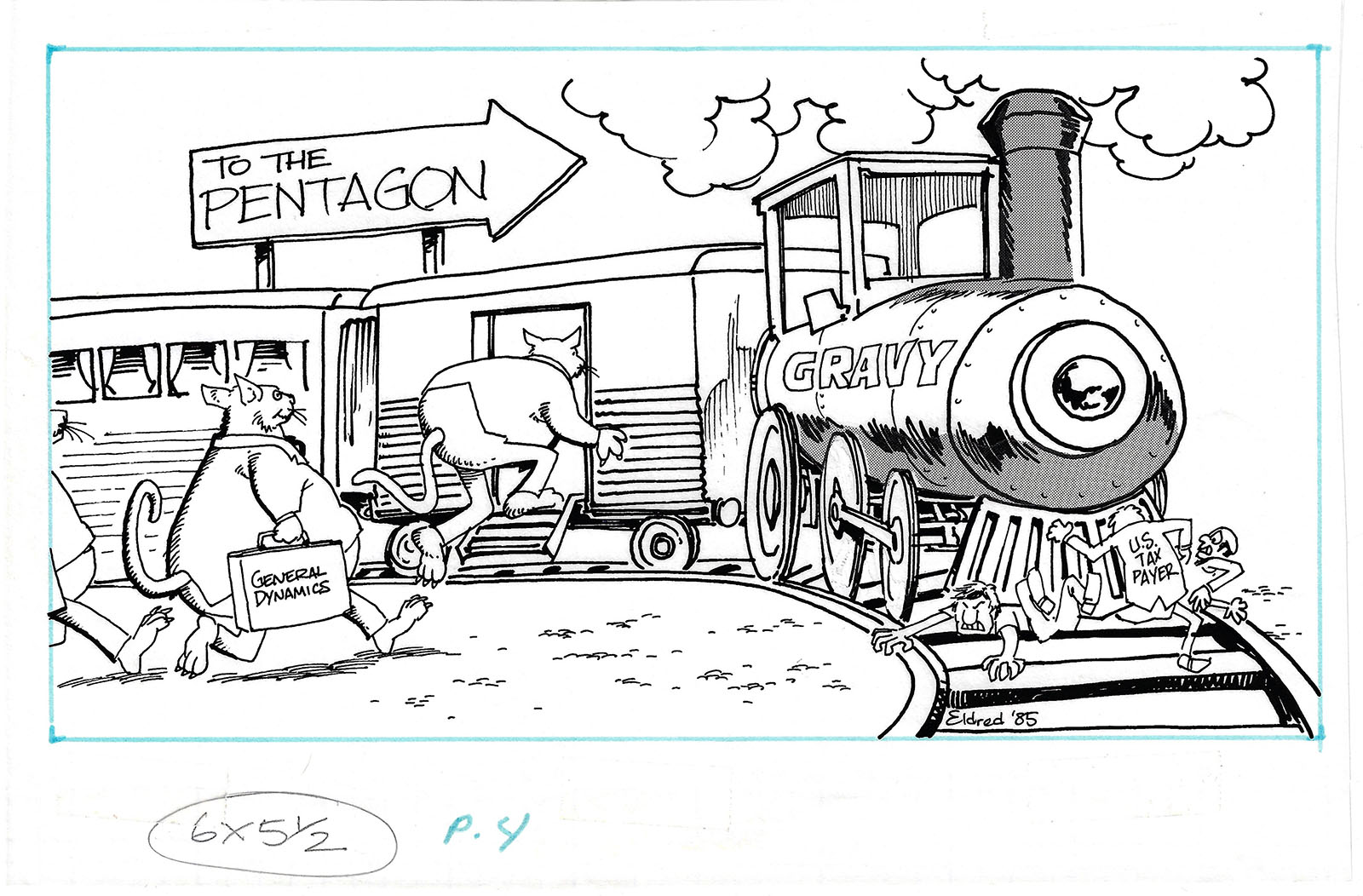 Here’s another one you could publish today with no changes whatsoever. 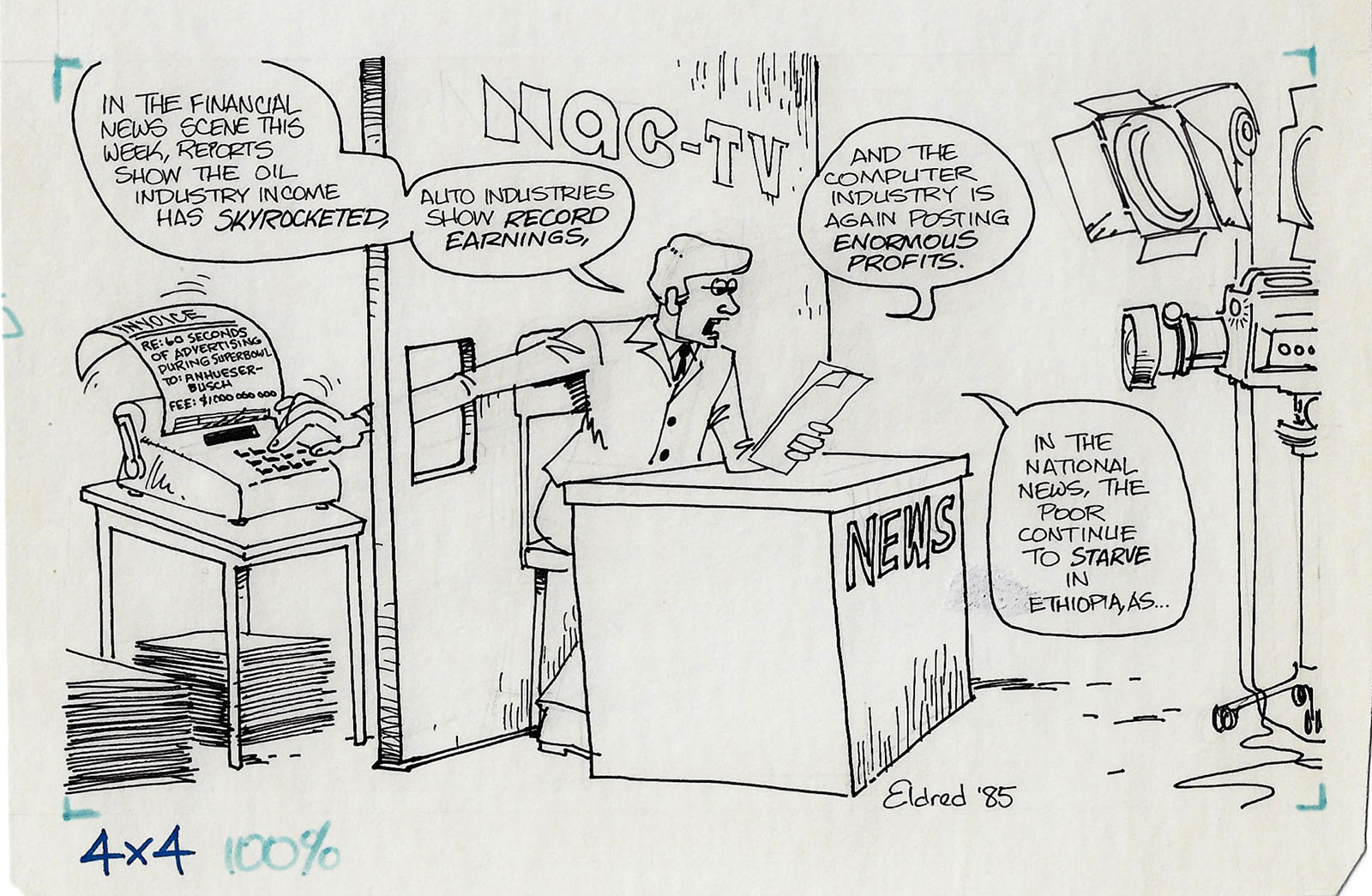 TV network profits skyrocket behind the scenes, and the clock starts ticking down on the life of nonprofit news organizations. 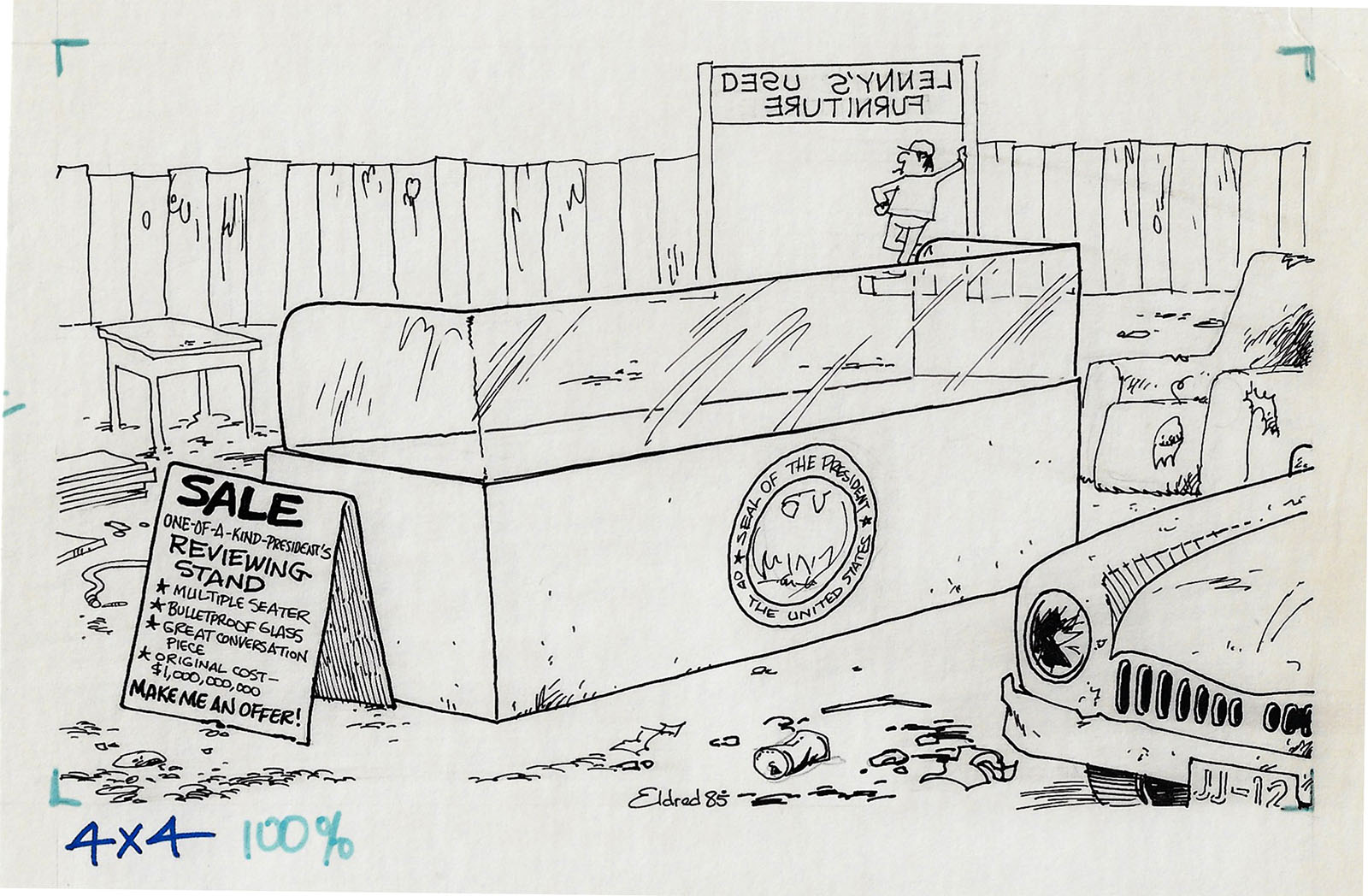 I have no memory of what motivated this. Probably another miniature Reagan scandal that got washed away in the tide of larger ones. 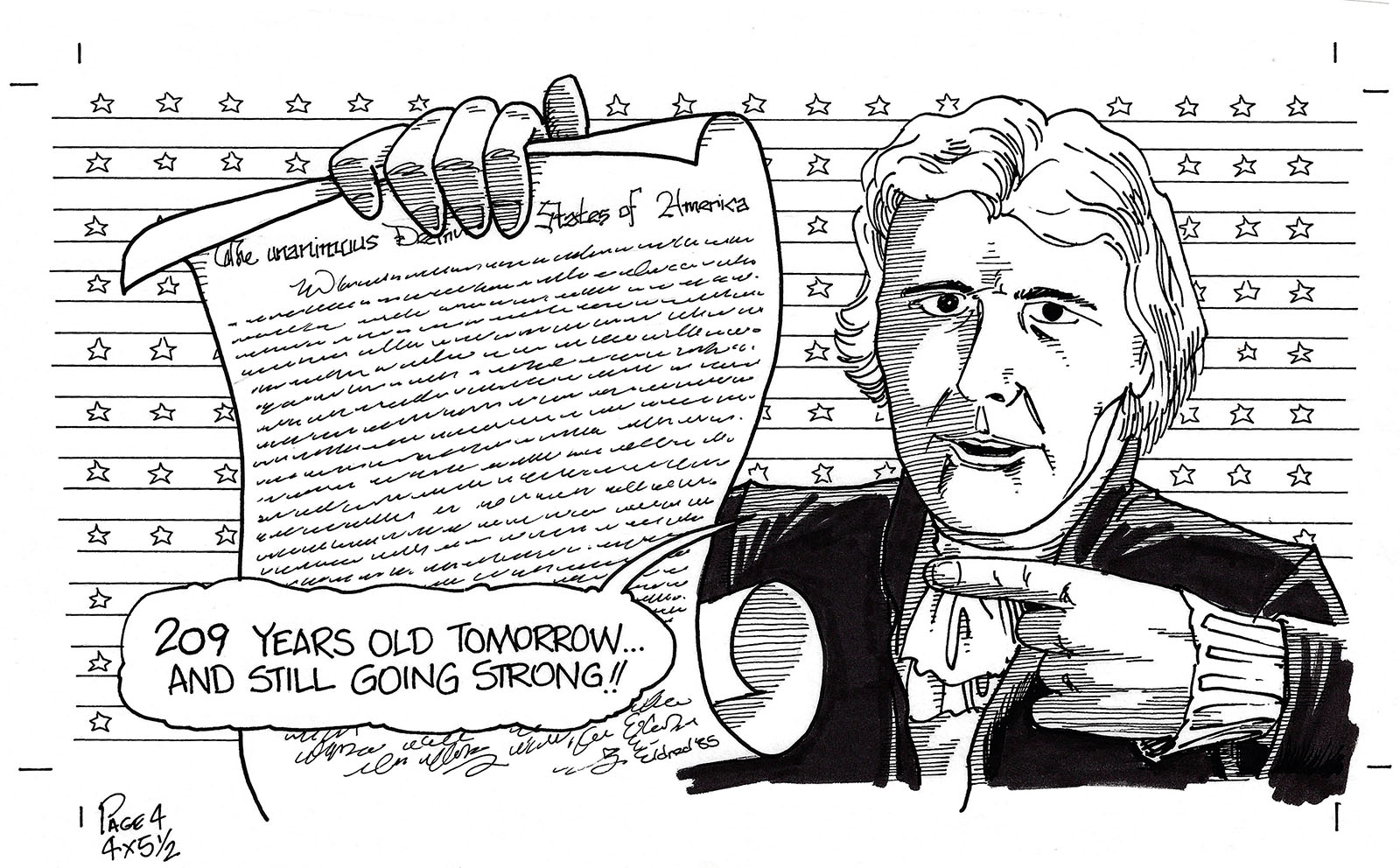 For this I tried to capture that interesting “etching” style you see on dollar bills. It’s much harder than it looks. 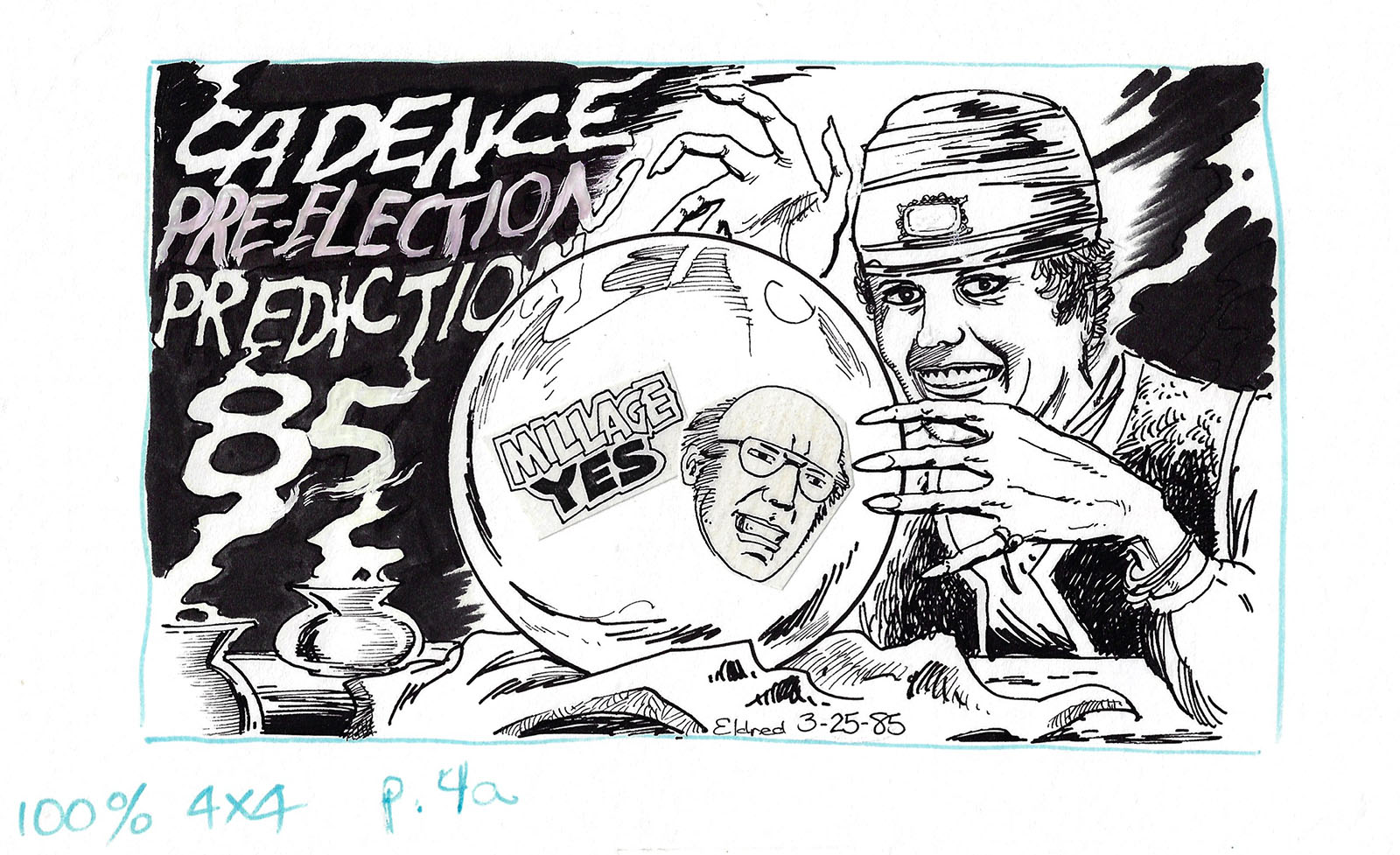 That’s the editor-in-chief Susan Lovell with another comment on a special election in Michigan. She turned out to be correct on the candidate; Physicist/Republican Vernon Ehlers was elected to the Michigan Senate (essentially transferring over from the House). He went back to the House in 1993 and retired in 2011. 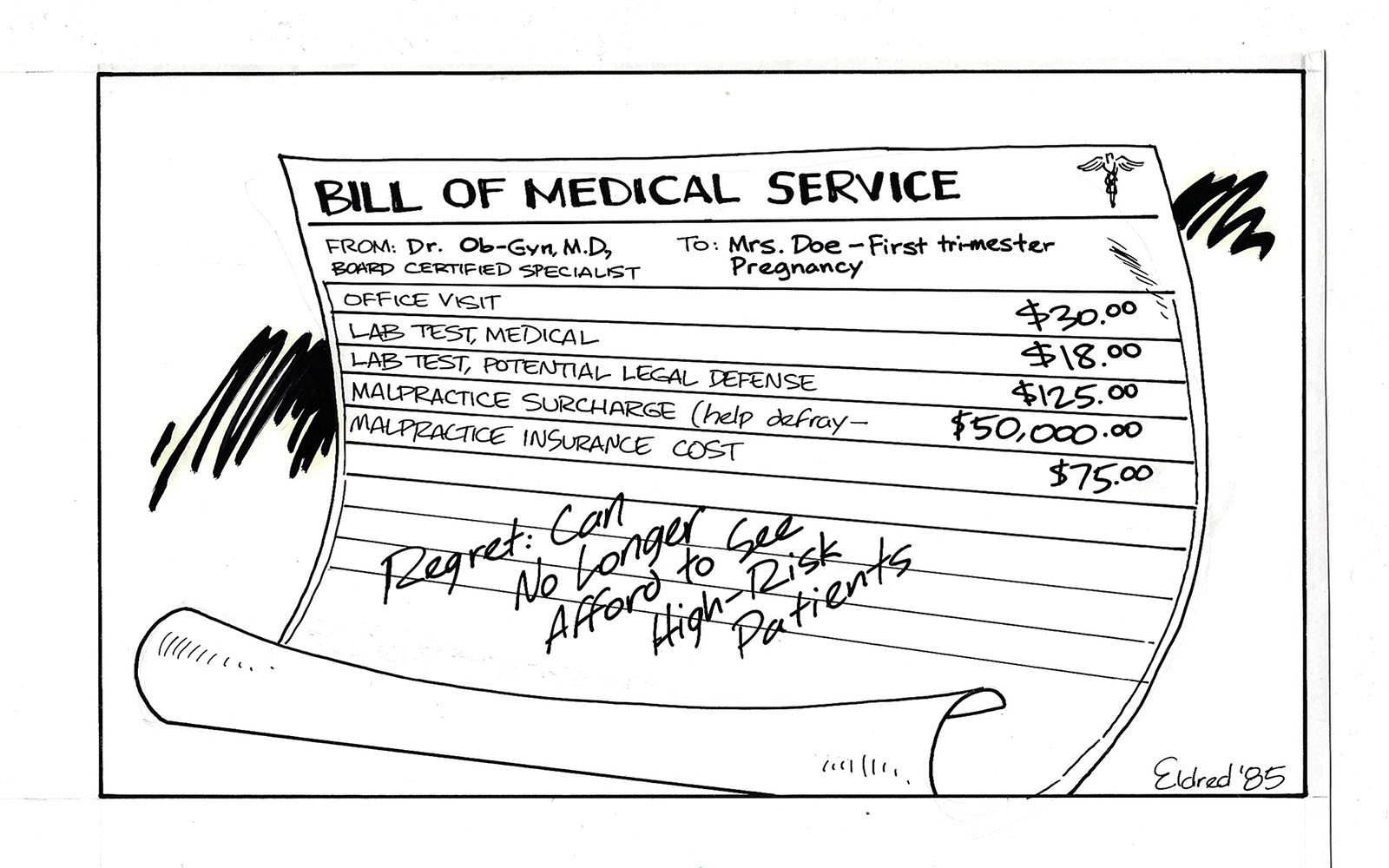 Rising malpractice insurance was becoming a thing in 1985. Again, glad we got rid of it.

Lee Iacocca did float the idea of running for US President in 1988, but was talked out of it by Tip O’Neill. If you don’t know either of those names, don’t sweat it. 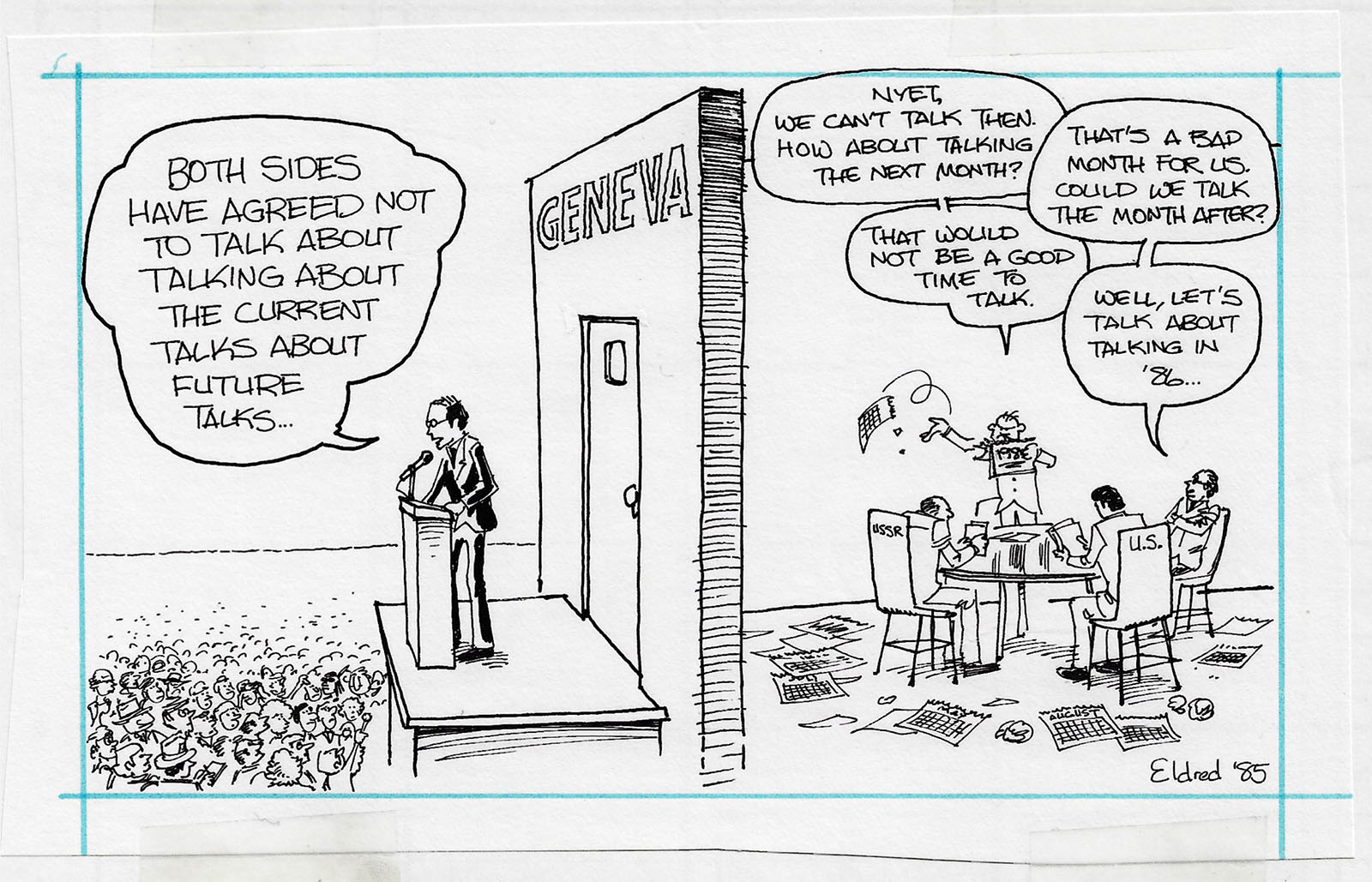 Meetings about meetings were already a thing in 1985. Everyone got really good at not deciding things. 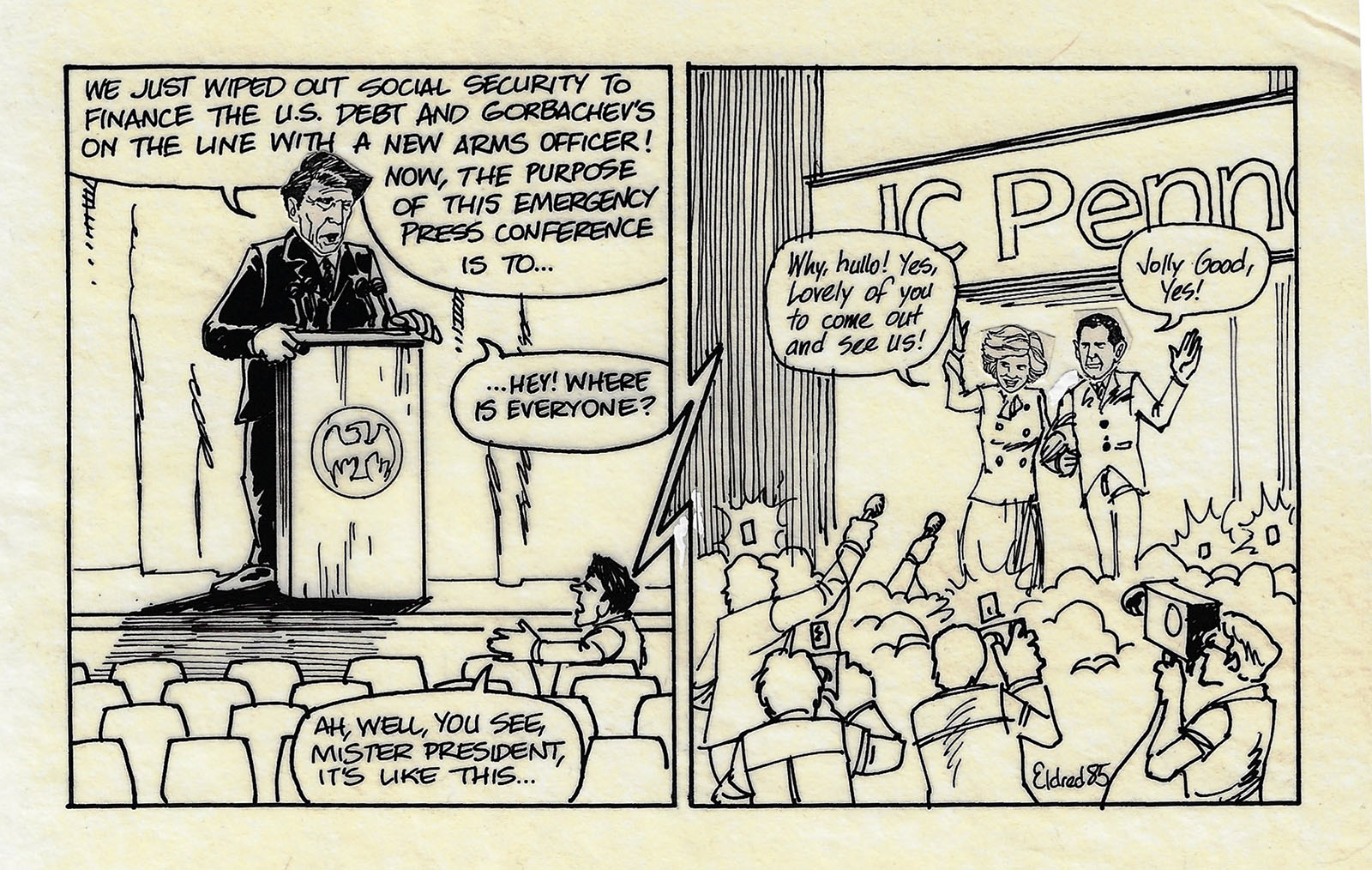 Prince Charles and Lady Diana were a really big deal when they visited the US in 1985. I belonged to the camp that paid them no attention whatsoever until I had to draw them for this cartoon.

I’m fairly certain this was the first time I was asked to draw the US Capitol building. Based on this drawing, I don’t think too highly of my reference material. 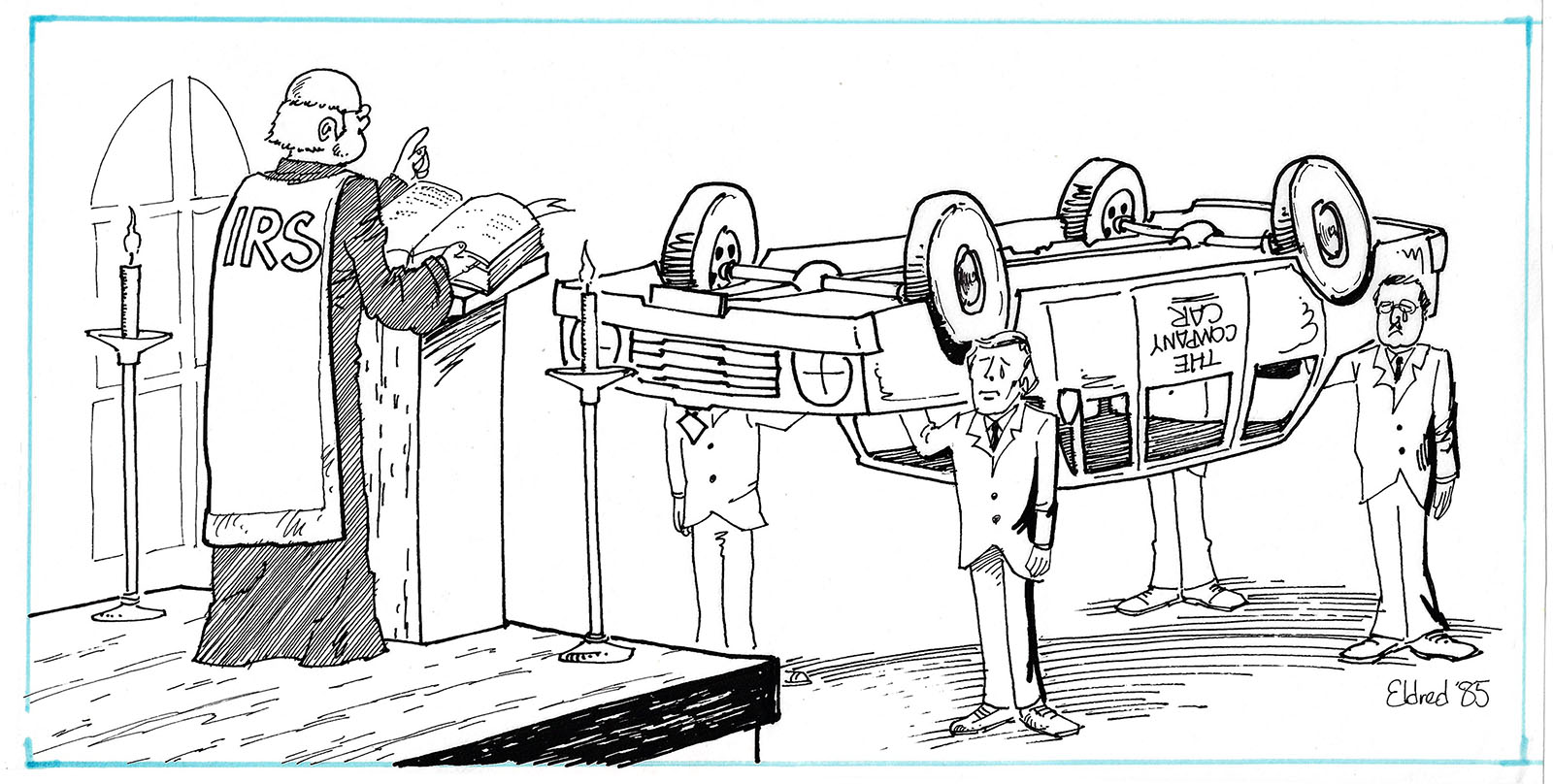 Cars again. Remember, I came from Michigan. At some level, we were constantly aware of the auto industry right down to our marrow, whether or not it directly impacted us. Only sports teams were more prominent. 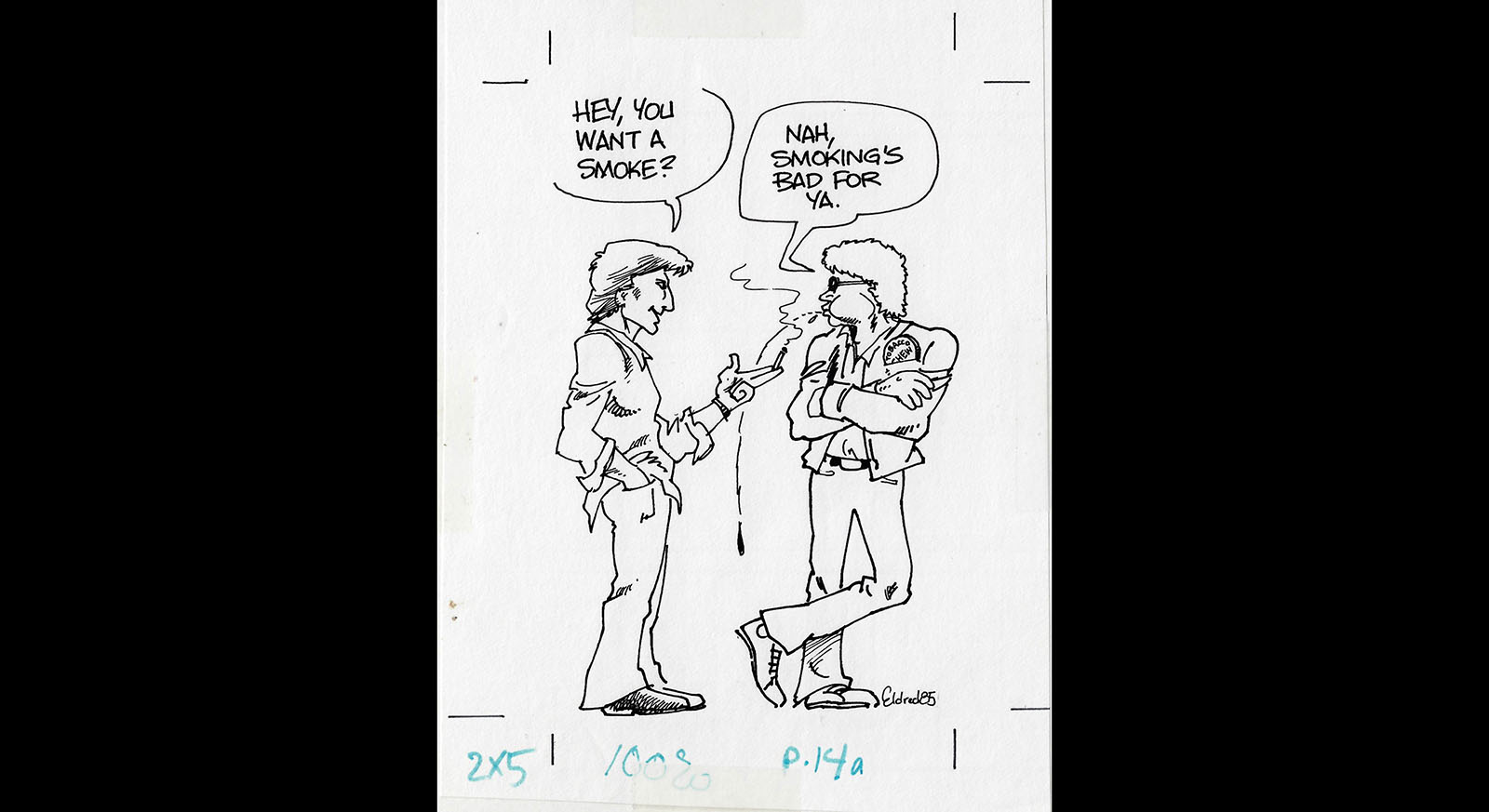 Once in a great while, text would crowd the editorial page and the cartoon would get squeezed to two columns. 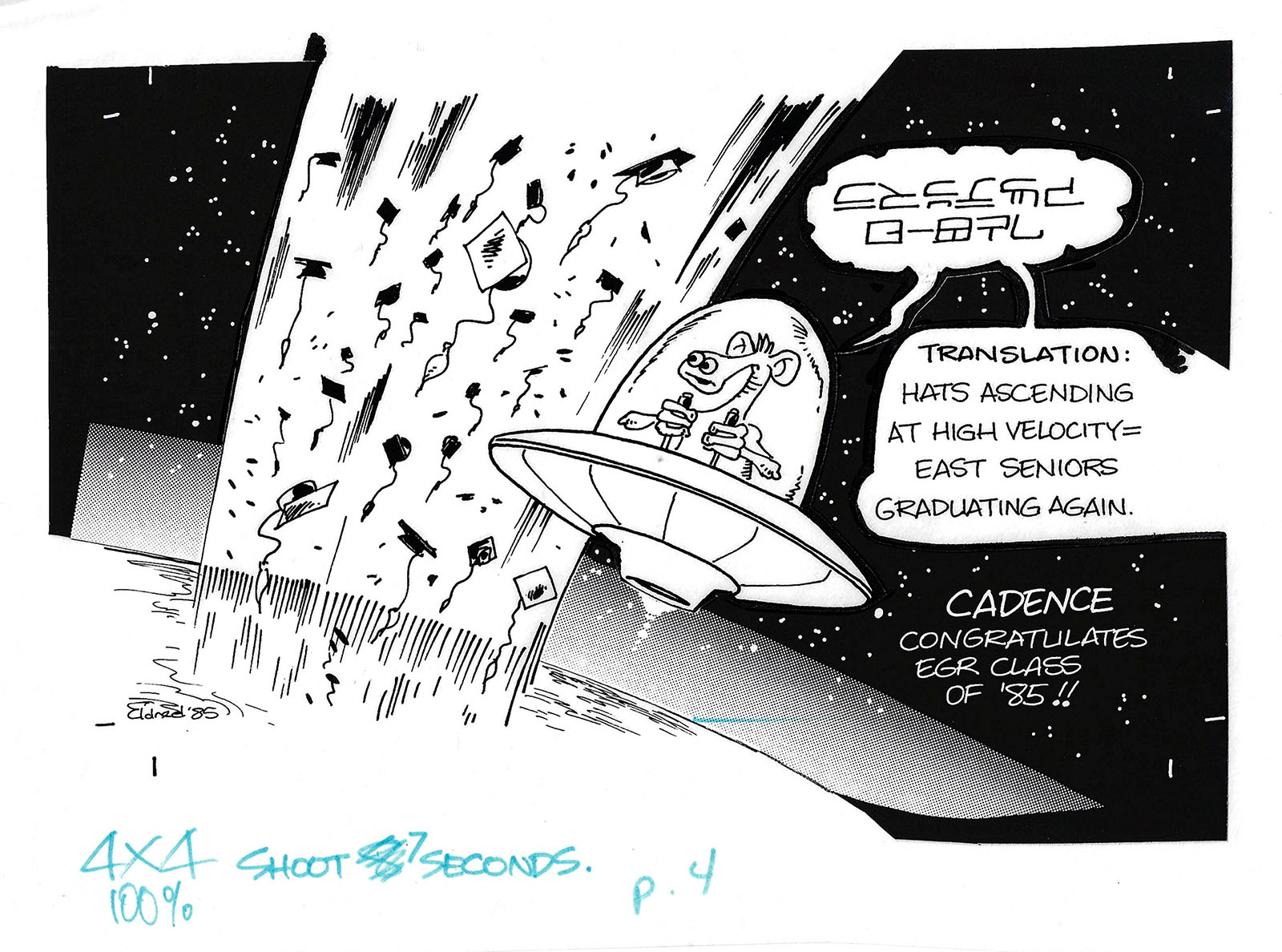 East Grand Rapids High School was basically across the street from our office and some of the senior staff of the paper had kids there. Naturally, they were in tune with graduation. I don’t remember if it was my idea to turn this into a sci-fi cartoon, but I wouldn’t put it past me. Speaking of which… 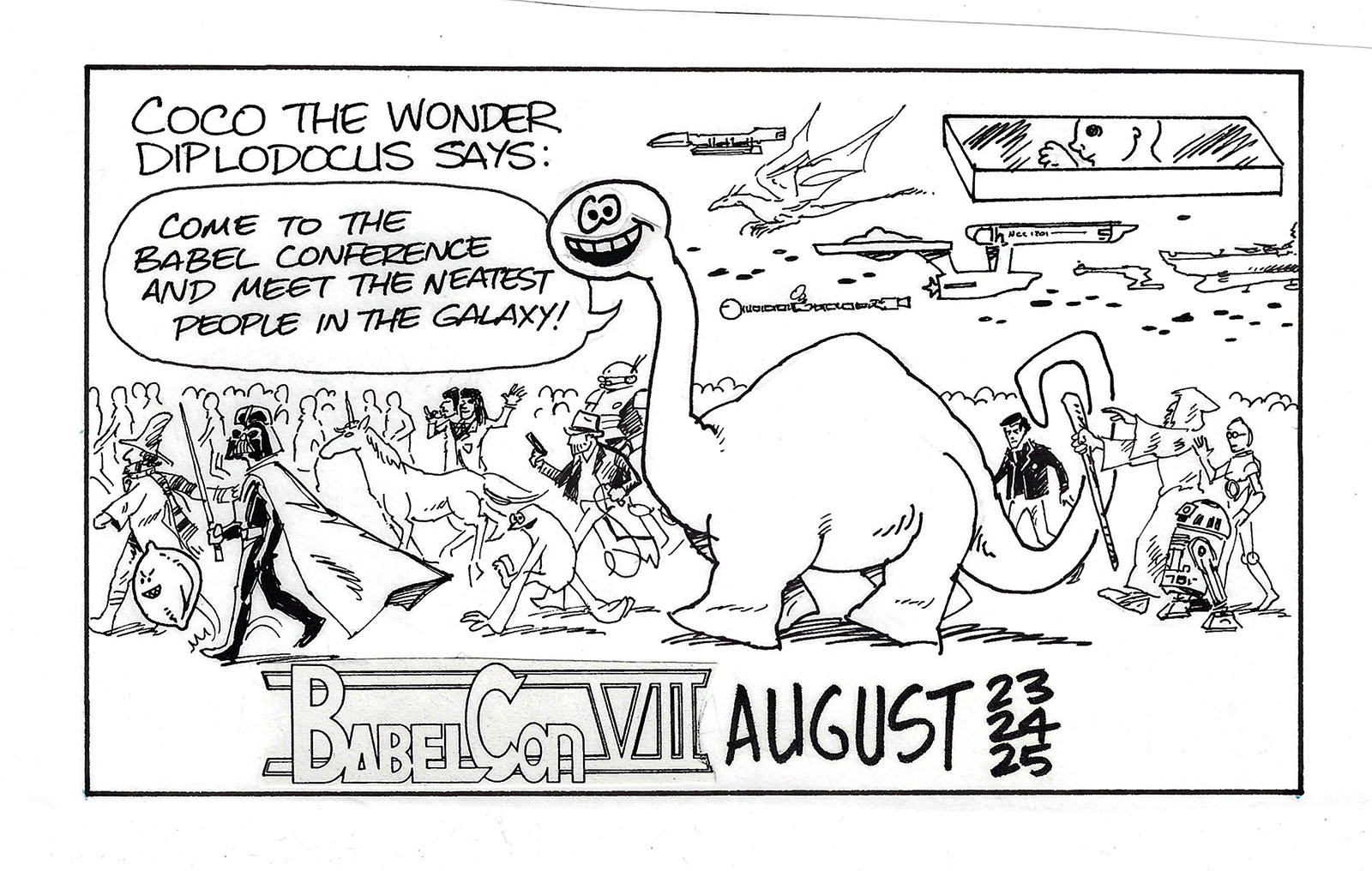 This was not a political cartoon at all, but rather a sneaky way to get some free publicity for the sci-fi convention I was helping to run in the summer of ’85. Shortly before the convention was held, there was an unsold spot in the paper, so I quickly drew this and got us a free ad. Our editor-in-chief didn’t find out until after the paper was printed and she was none too happy about it, but I don’t remember getting in trouble. And someone who went to BabelCon VII said they found out about it because of this ad. So it definitely paid off.

If you’re a sci-fi fan, you’ll enjoy picking everything out in this image. It’s for sure the first time Space Battleship Yamato and Armored Trooper Votoms were represented together in an American newspaper. Coco The Wonder Diplodicus was our mascot, BTW.

The following summer, I served as the chairman/art director of Babelcon VIII. See all the stuff I drew for it here.

There’s still one more hunk of political cartoons to go! Watch out for Volume 3!