The year 1986 was a huge turning point for me, the root of which was a yearly Science-Fiction convention called Babel Con. It was created and run by a group called the Star Trek Club of Grand Rapids (Michigan), and I first learned of it through a newspaper article in the Grand Rapids Press. I was 16 at the time and finally able to drive myself around, so this seemed like something I should do.

It was a time when people freely gave out their addresses and phone numbers, and I decided to call the number in the article for more information about Babelcon III, scheduled to be held in the fall of 1981. A guy named Steve Harrison picked up the line. He was the chairman that year, and he was happy to tell me whatever I wanted to know. He was generous and welcoming, and by the time I put the phone down my decision was made.

Steve and I met in person the next year and bonded over our shared love of Star Blazers. He introduced me to the wide world of anime and it led to years of friendship in which we traveled to SF cons all over the Midwest. It brought me into contact with the world of SF fanzines, which became a whole new vehicle for me to share my comics with the outside world for the first time (a longer story for a later account).

Steve also convinced me to join the Star Trek Club of Grand Rapids. I was hesitant at first since I’m not a huge Star Trek fan, but the name was merely a patina for what had become a general-interest SF & fantasy club. Mostly, it was a gathering point for all the local goofballs who liked what I liked and wanted to share it with as many people as possible. Babel Con was their way of putting on a show.

Four years later, I had not only become a club member in good standing, I had participated as a Babel Con staff member (mainly handling art and graphics) and was ultimately elected to serve as the chairman for Babel Con VIII in 1986. I was the first chairman who had a print media career and the ability to create promo art, so I single-handedly managed that aspect of the event.

It was a fast and loose time when it wasn’t hugely expensive to put on a convention, and we didn’t yet have to treat it like a business with liability, so no idea was too crazy. Here’s some of what we came up with… 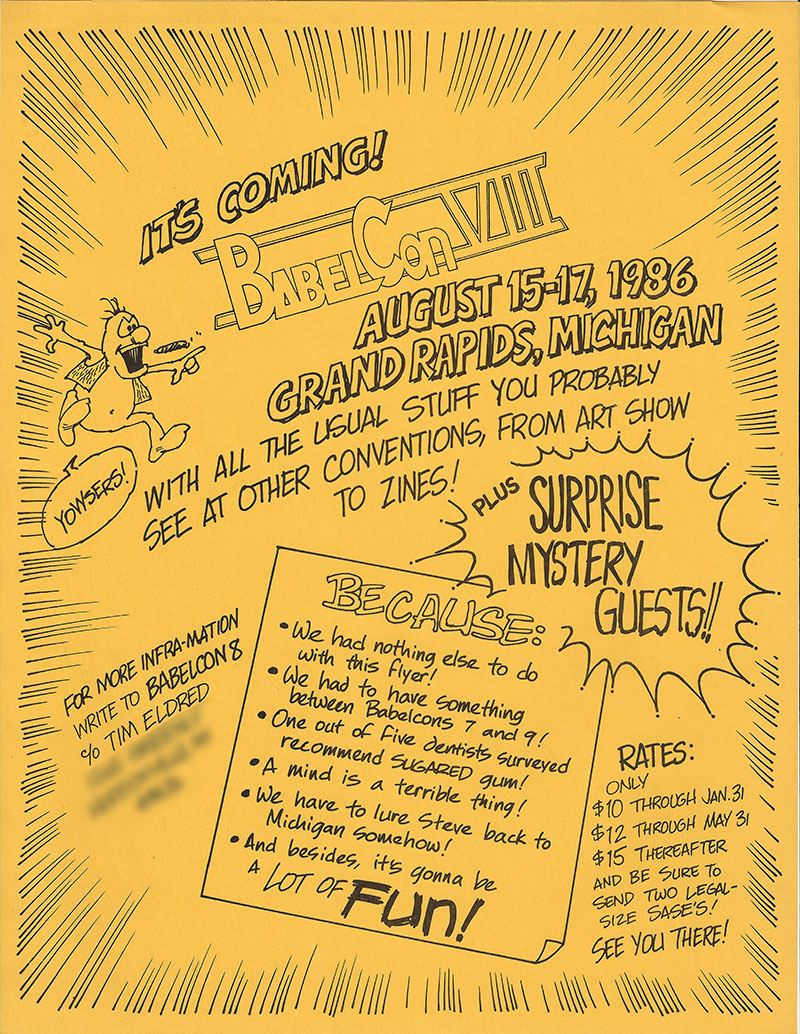 This was the first flyer, handed out at SF conventions in early 1986. Completely hand-drawn. I had designed the logo the previous year for Babel Con VII. The little cigar-chomping guy was invented on the fly and became our unofficial mascot. We had a name for him…which I forget. 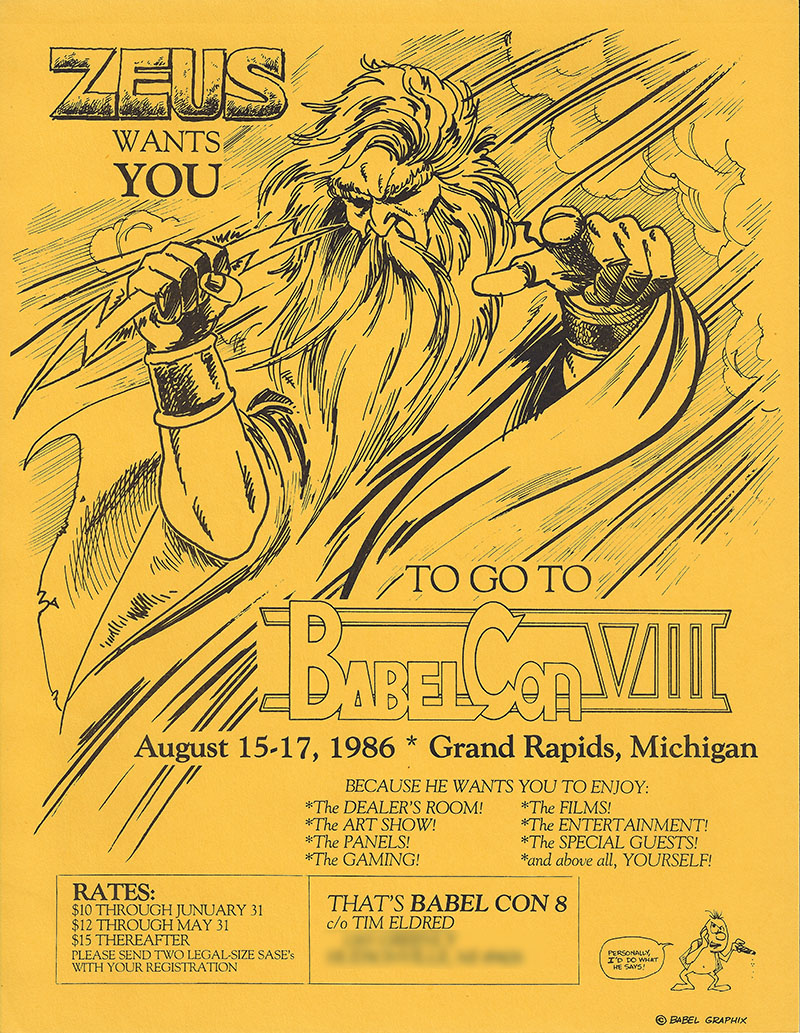 For the second flyer, we decided our spokesperson was Zeus the almighty. There was a gimmick version where his arm was cut out and attached with a paper fastener for “realistic lightning-hurling action.” 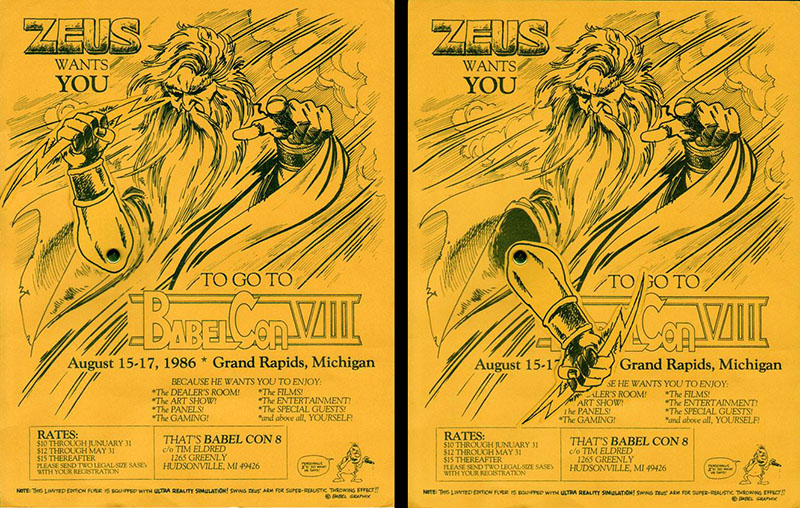 See? Hilarious! We were fully willing to embrace the silly if it meant getting more attendance. Plus, it took the edge off a difficult job. 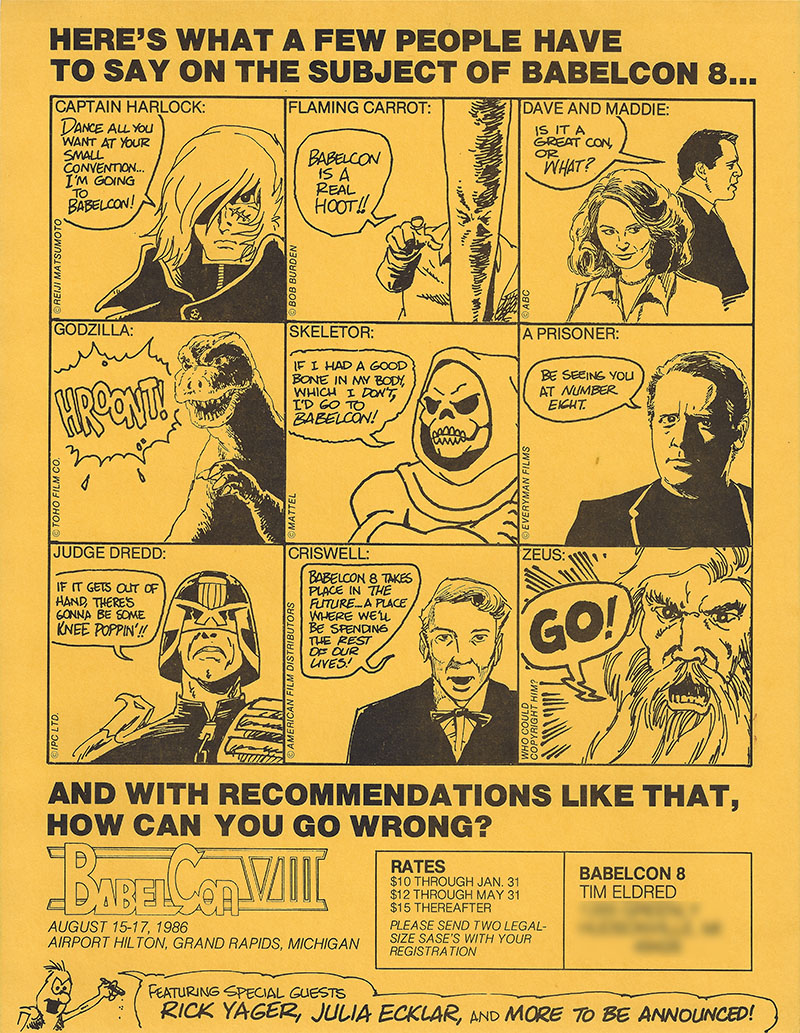 This flyer put a whole bunch of our favorite things on one page to demonstrate that the Star Trek Club (and Babel Con by extension) embraced it all. The upper right box was from a TV show called Moonlighting, made when Bruce Willis still had hair. 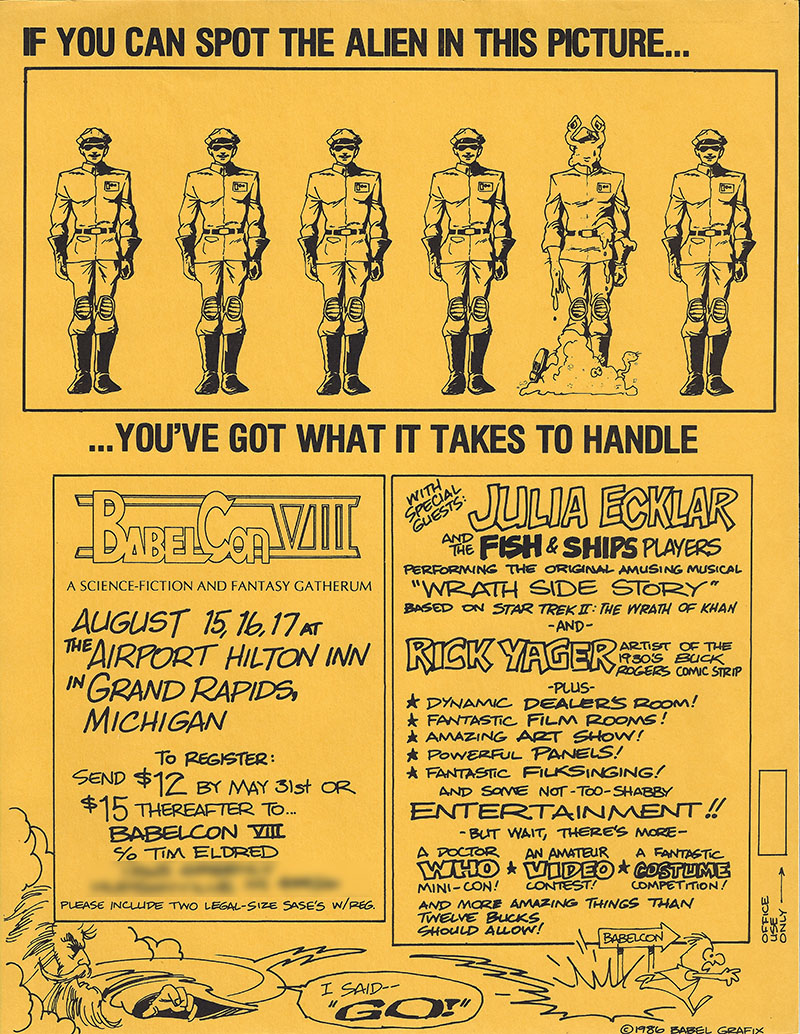 Yet another flyer with more silliness. The reference for this one was a lousy SF TV series called V, which we all watched because our standards weren’t all that high in 1984/85. 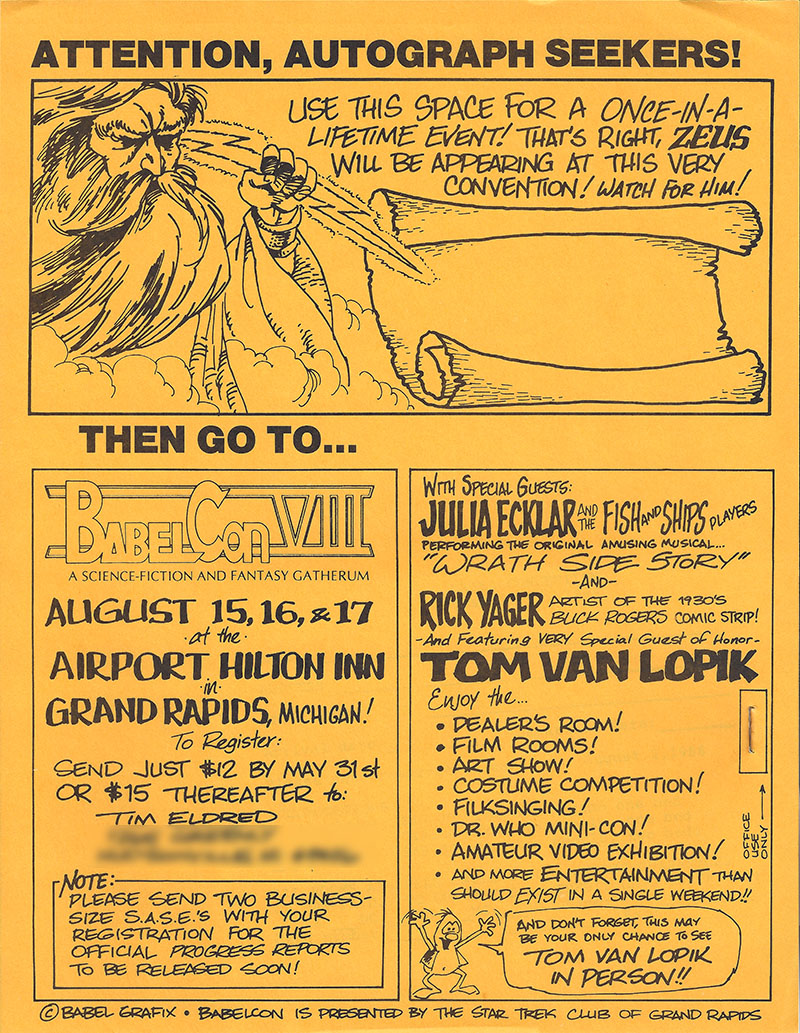 Peak Silly arrived with this flyer. It was made for Media West Con, held on Memorial Day weekend in Lansing, Michigan. The husband of a staff member agreed to cosplay as Zeus and we set him up at a card table to autograph flyers. No other convention tried such a stunt, and it certainly got us noticed.

Notice the staple in the little box on the right side. There was a postcard attached with the address of our hotel. Attendees could use it to reserve a room. Plus, it finally showed us what “office use only” meant. 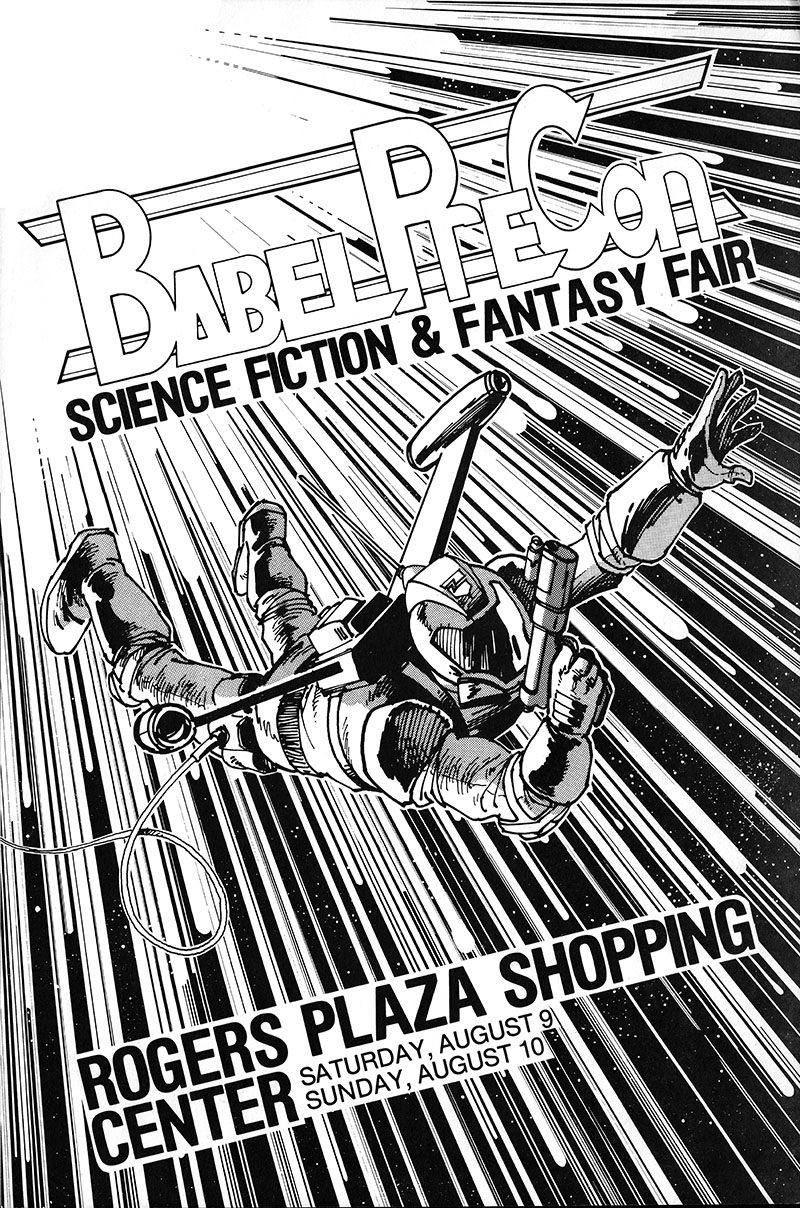 I don’t remember who it was, but someone in the Star Trek Club came up with a brilliant idea; the weekend before the convention, we assembled in a local shopping mall (with the cooperation of the mall staff, of course) and spread out our collections for everyone who wandered past. There was a Star Wars section, a Star Trek section, and others for Dr. Who and fantasy titles and whatever else we could pull together. I personally ran the anime section. It was a huge success and got us some local TV news coverage at exactly the right time.

This was the 11×17 promotional poster. The background was royalty-free clip art, and I drew the character, which was inspired by designs in Mobile Suit Zeta Gundam. 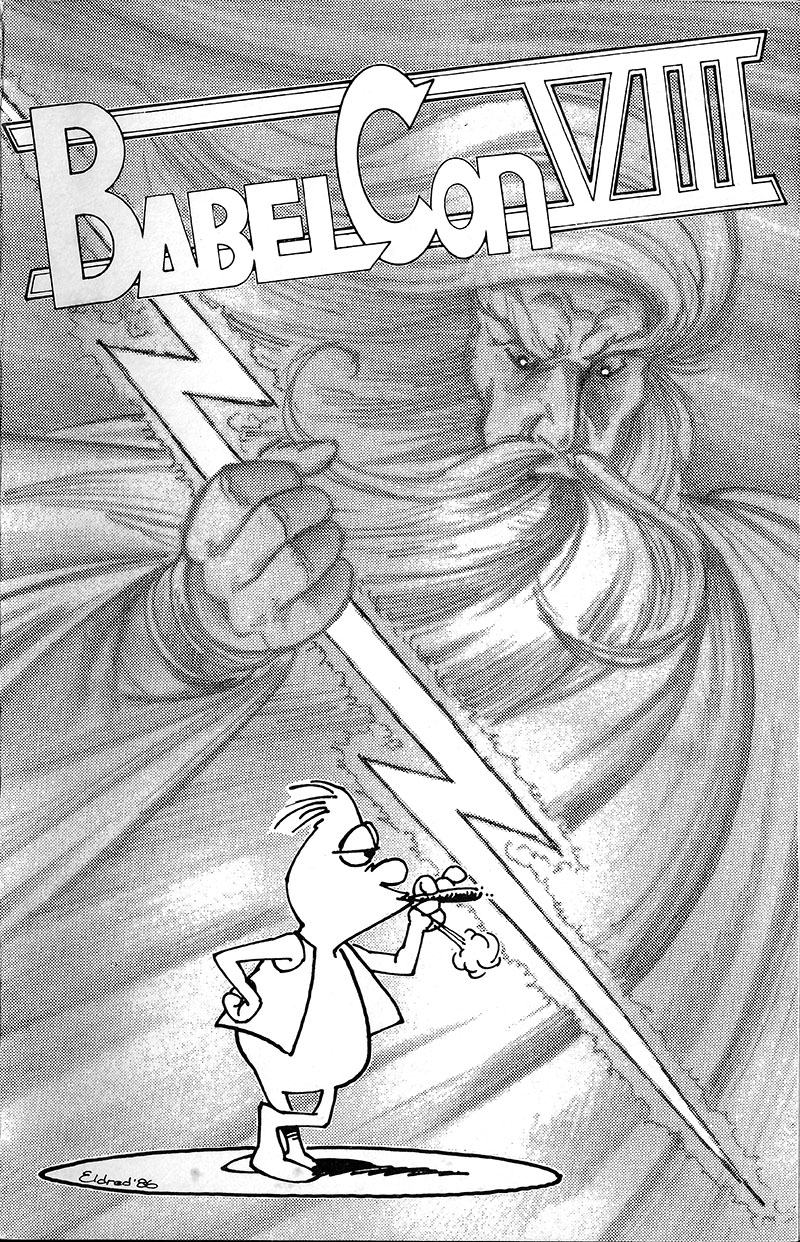 The last thing on my agenda as the media manager was the program book for the con, where our Zeus-themed stunts reached their conclusion. Selected pages are shown below so you can see what goofballs we were. 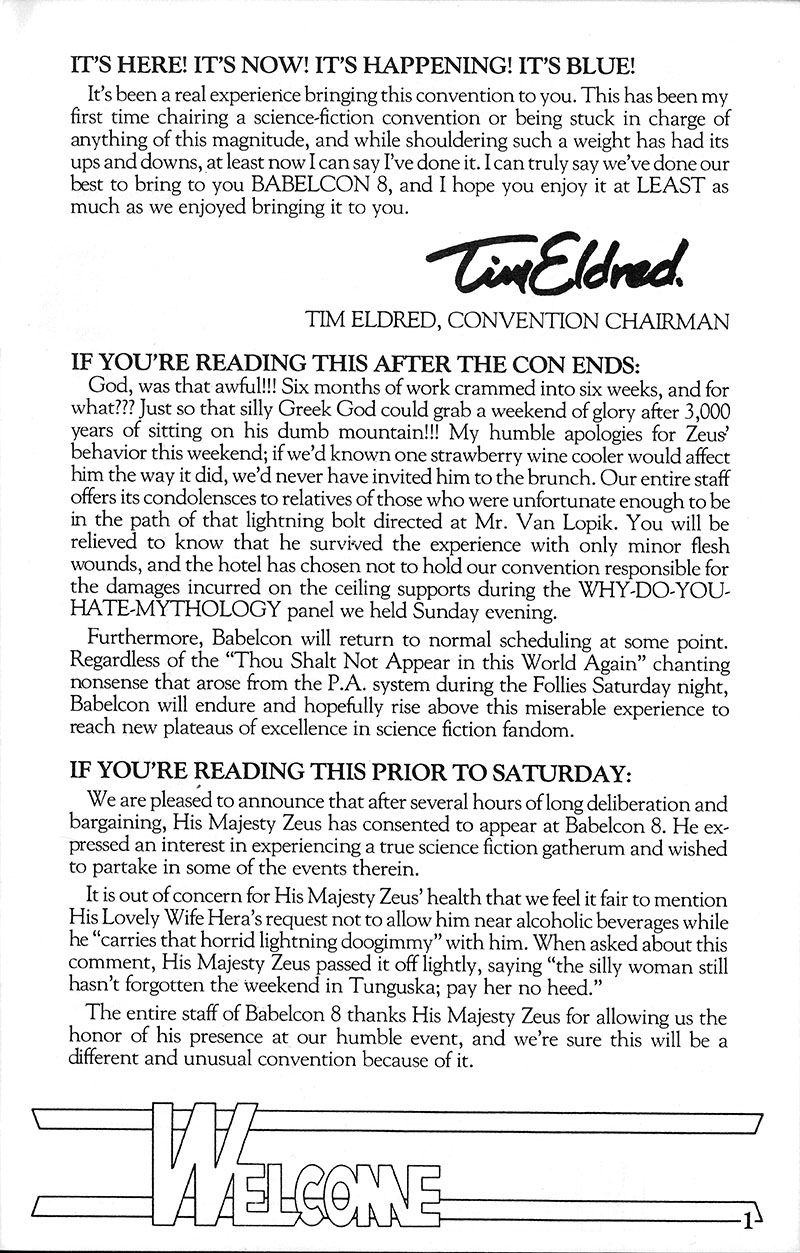 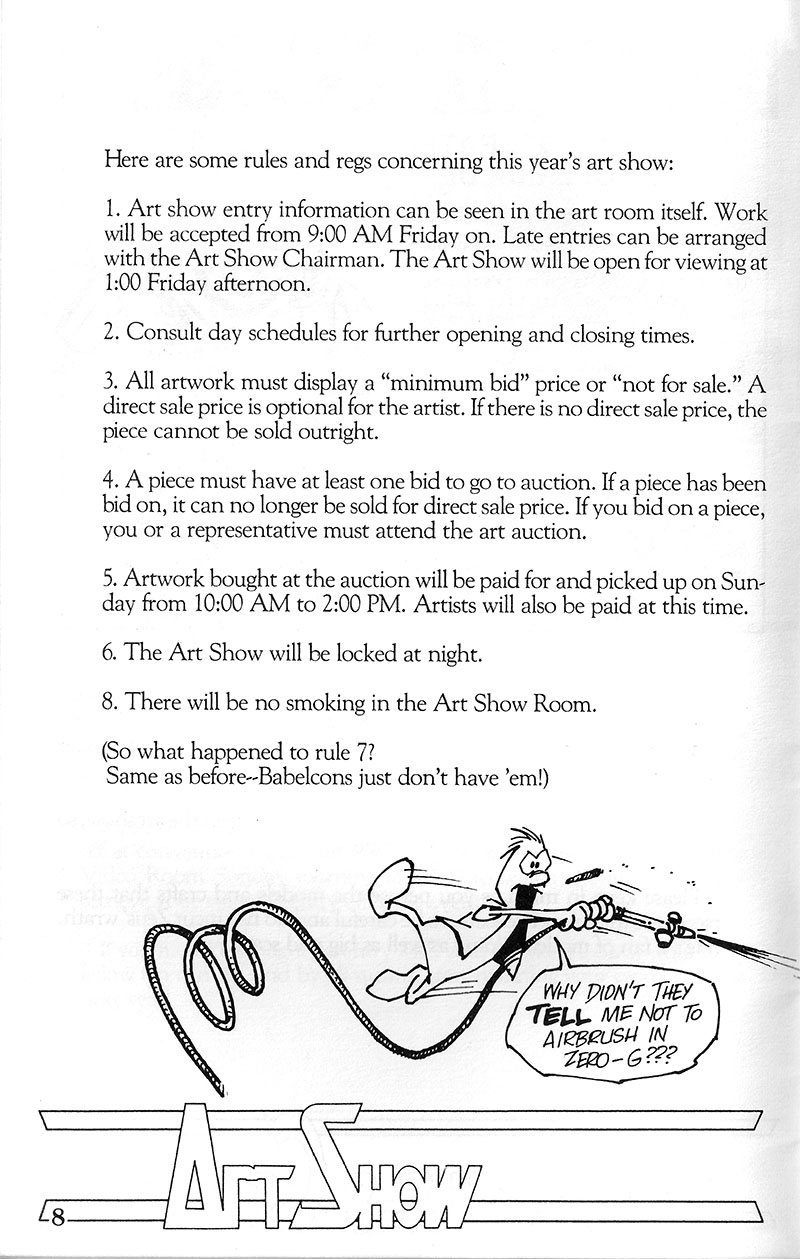 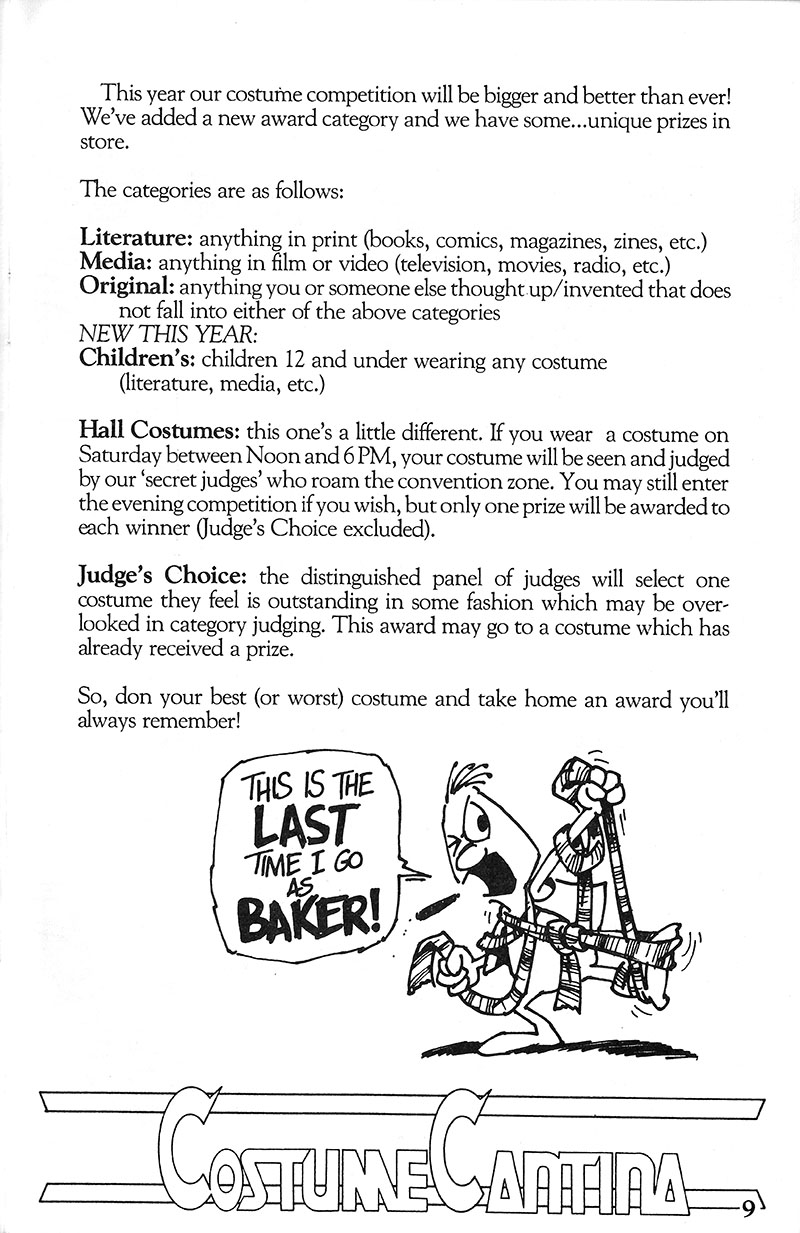 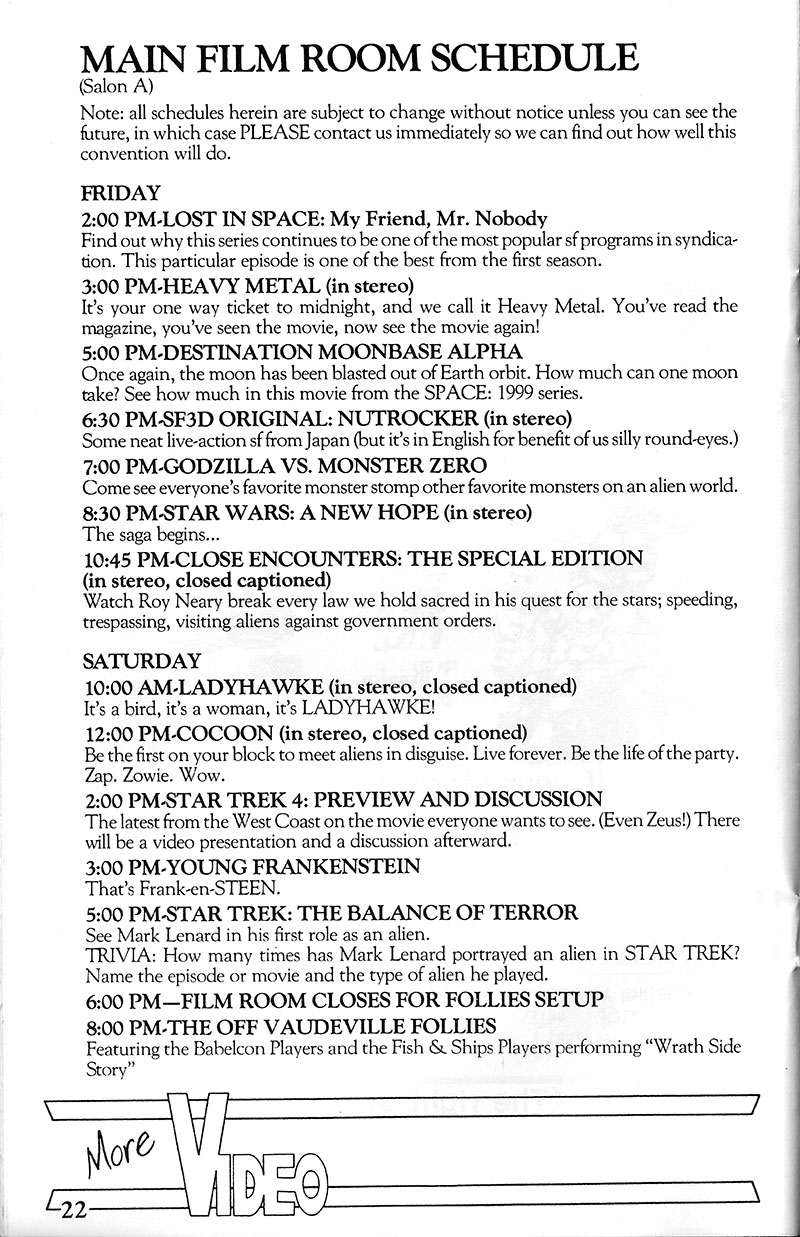 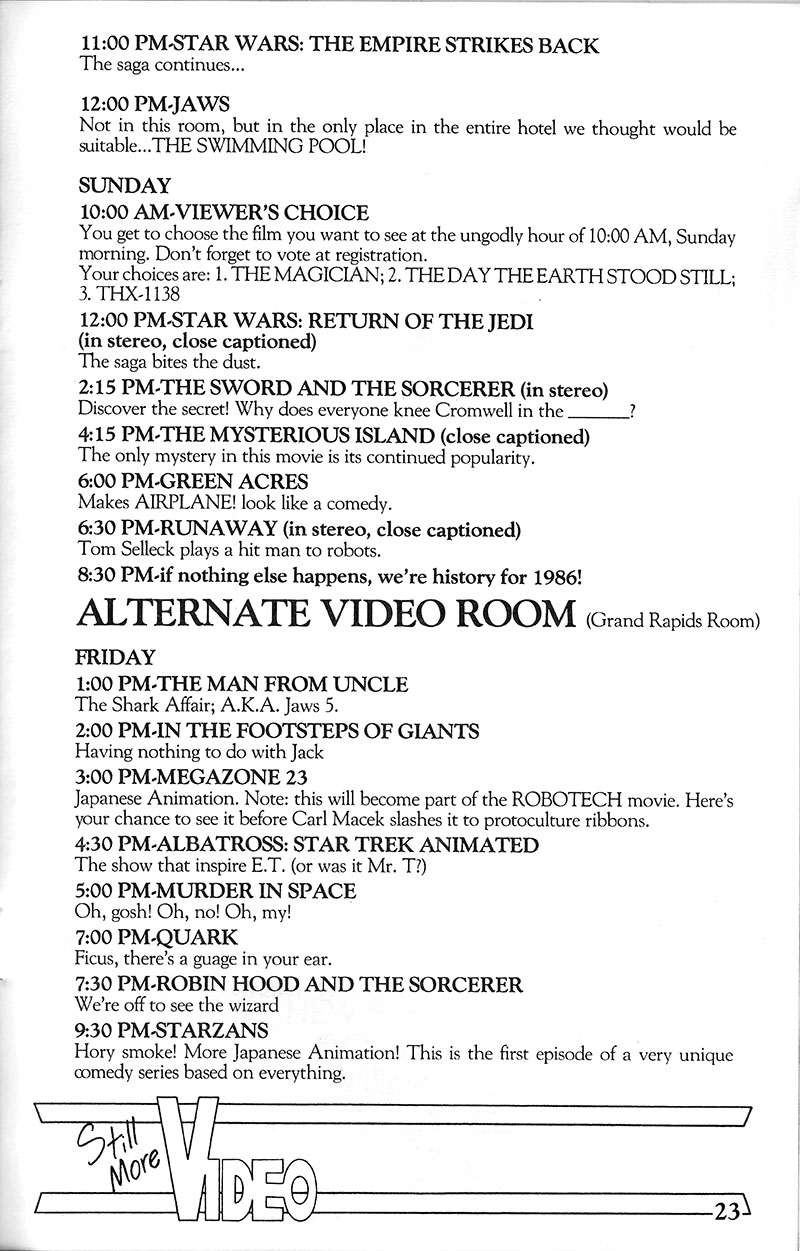 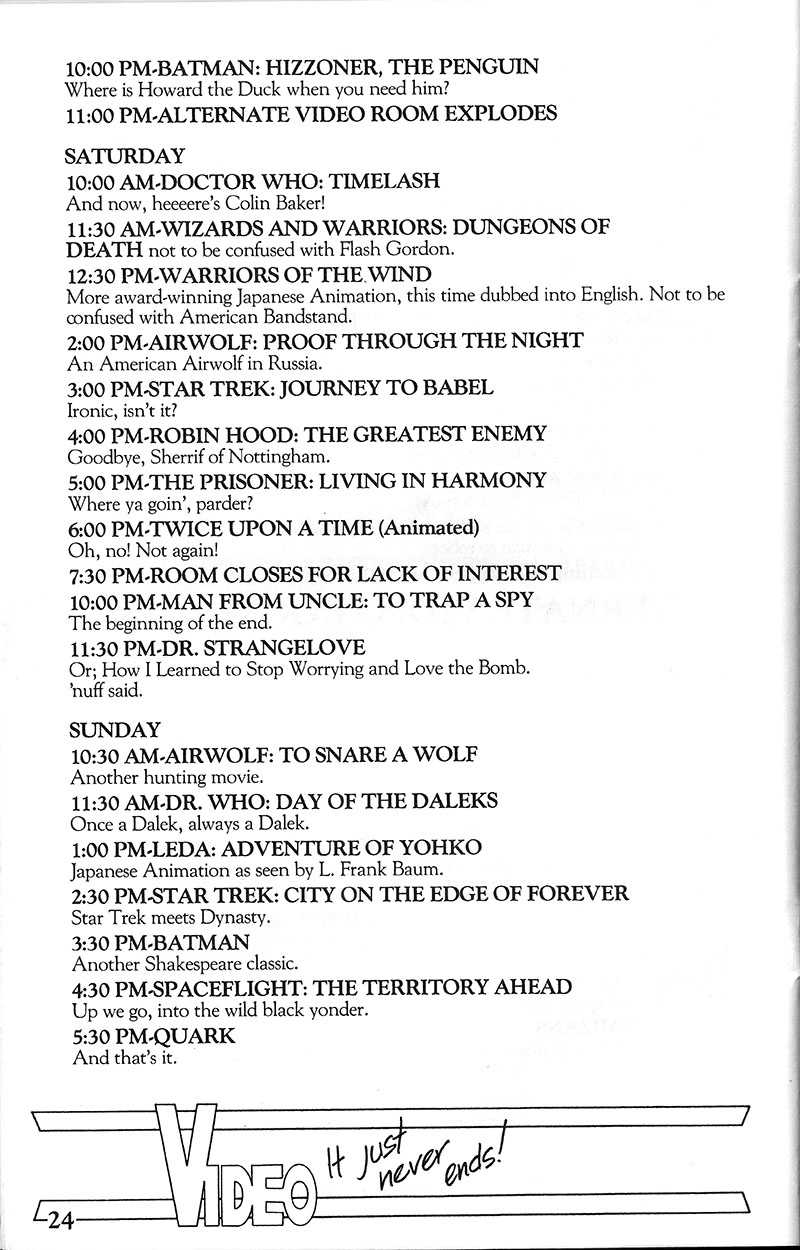 The best thing about Babel Con VIII was that we absolutely PACKED it with live entertainment. There was always something to see and do. Friday night and Saturday night main events were jammed solid with SF-themed comedy sketches that gave all of us pale, misunderstood iconoclasts our moment in the spotlight. It’s what we lived for all year long.

Like any event assembled by multiple personality types, it had its share of tension and drama. I knew even before the weekend started that I was never going to do it again. But it all paid off in the end. It was the most successful Babel Con to date with a HUGE profit of something like 200 bucks (!) and if a single person left unsatisfied, they have yet to register their complaint.

After Babel Con, my life evolved quite a bit. In the midst of all this, I met the girl who would later become my wife. Once Babel Con was behind me, that relationship became my driving force. It moved me to leave the Star Trek Club, move away from home (to the other side of Michigan) and change jobs.

I went back for the next Babel Con as an attendee in 1987. Unfortunately, this one didn’t go quite as well. Late on the Saturday night of Babel Con IX, I sat in a hospital waiting room while my friend Roger (that year’s chairman) got treatment for his finger, which was broken in a live stage accident in front of the audience. It seemed obvious to me that this chapter of my life had closed.

The next one would take me places I could never have imagined. It began here. 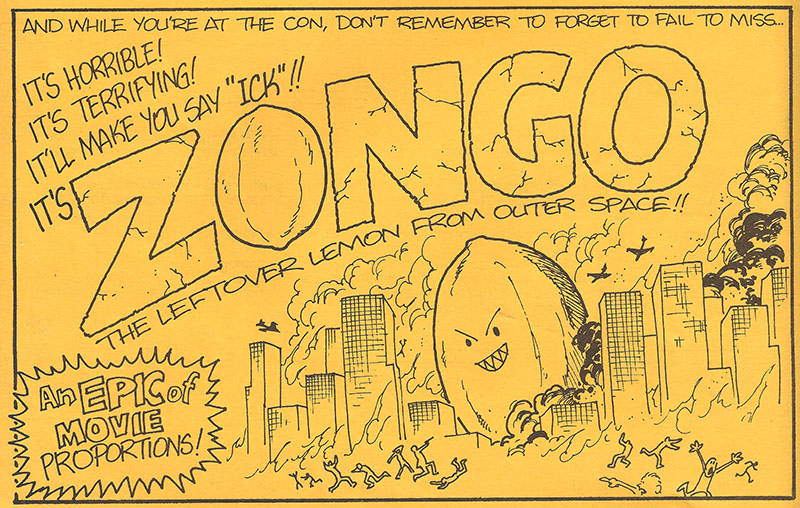 BONUS: a throwaway cartoon from a Babel Con VII newsletter I put together in 1985. We lived for the silly.