As described in an earlier article, I spent a couple years working for a weekly newspaper in East Grand Rapids. At the time, it was the most affluent sector of Grand Rapids, Michigan. The paper’s tiny office was right in the hub of the city center, surrounded by picturesque homes and a lake. It goes without saying that the place was very, very white. And this was the Reagan era, so you can probably paint the rest of that picture yourself. 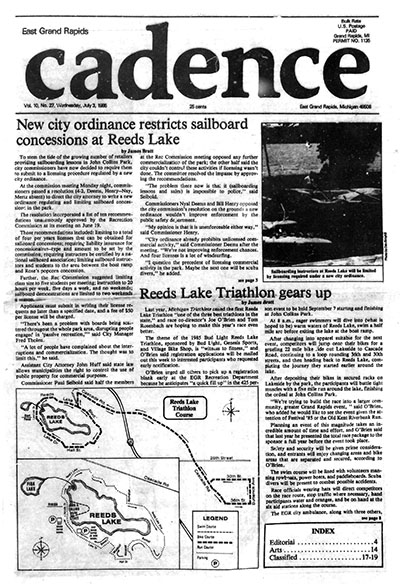 The name of the newspaper was Cadence, and I worked in the “composing” department, where the actual assembly took place. We’d paste up an issue every week (between 24 and 36 pages) and send it out for overnight printing. Between issues, we offered our graphic arts services to the local community, which gave us plenty of variety. Slow days were rare.

I started in 1984 when I was 19 and left in 1986 after I turned 21. I was the only one on staff who actively drew, and when Editor in Chief Susan Lovell discovered this, she added “political cartoonist” to my job description. She would come up with a concept every week and describe it to me. I’d illustrate it (a welcome break from pasting up ads) and within a couple days it would go out to the entire readership.

I still had a lot of evolving to do as a cartoonist, but if anyone thought I wasn’t qualified they kept it to themselves. The job was created for me because I was there to fill it, and Susan was happy to add this feature to her paper. I have no idea if anyone else came along to inherit the role after I left. Life was calling, and I was on to bigger things.

At the ages of 19/20/21, I was preoccupied by pop culture and not yet politically “tuned.” This was the pre-internet era, so it was possible to ignore news entirely. I was aware of the major stuff (the Cold War still hung over everything, after all), but in many cases I was uninformed about the topics Susan would bring to me, which added a teacher/student vibe to the work. She also commented on local East Grand Rapids issues, about which I had no opinion. My job was simply to draw. Which was just fine by me.

I have since lost touch with everyone from those days. Cadence newspaper is long gone and Susan Lovell is now a novelist, so good for her. As with all the jobs I held prior to launching my comics/animation career, there are good memories and bad. A few of them emerge when I look through these cartoons, so I’ll comment when they do. (Note that some refer to very specific events, but they aren’t presented in chronological order.) 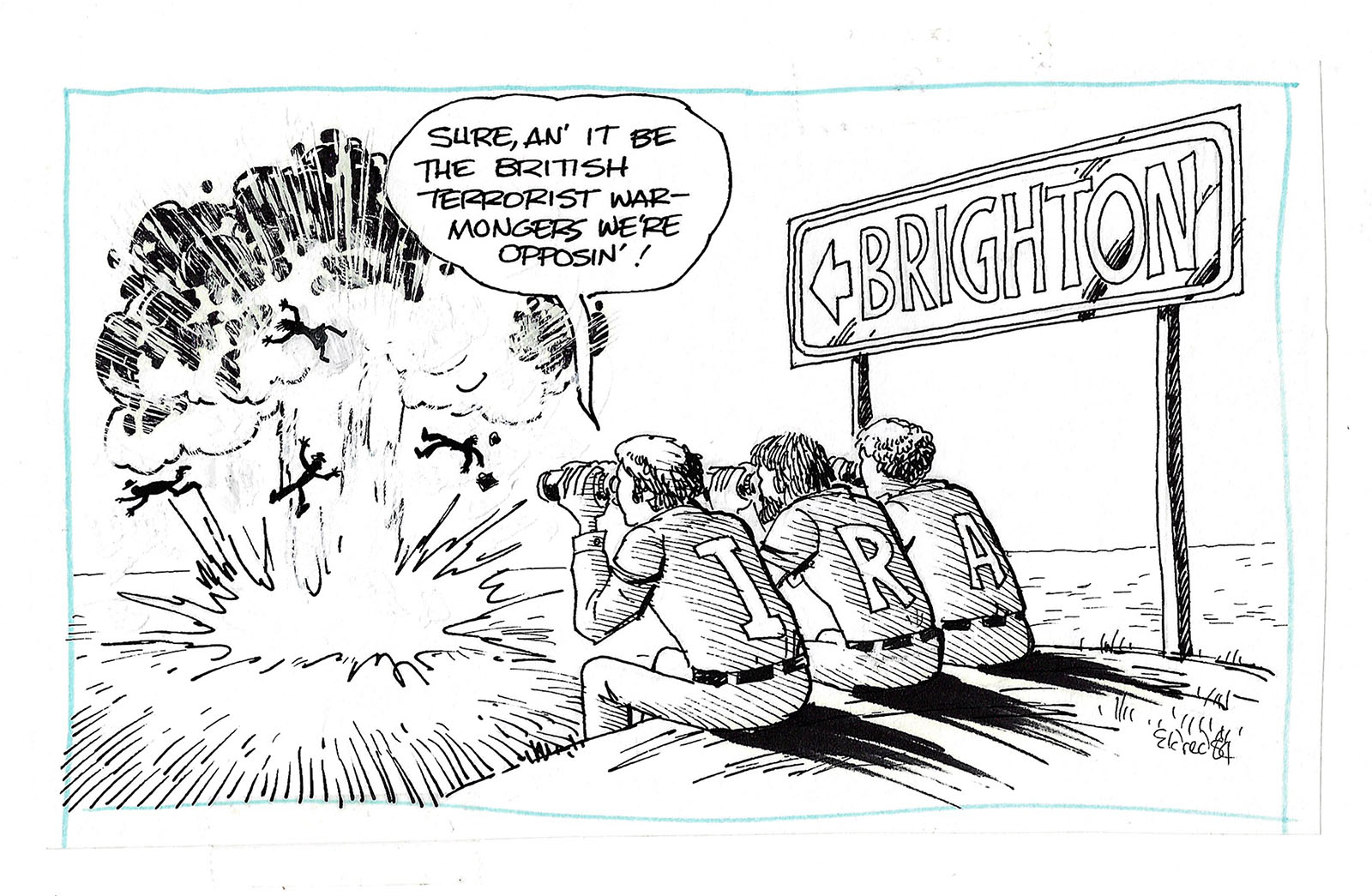 This one caused a ruckus. I recall a letter of complaint about the flying bodies being in very bad taste. As the artist whose name was on the thing, I got the blame. To her credit, Susan took full responsibility for the image, saying she came up with the concept and that I was the “artistic illustrator.” My first brush with bad press! 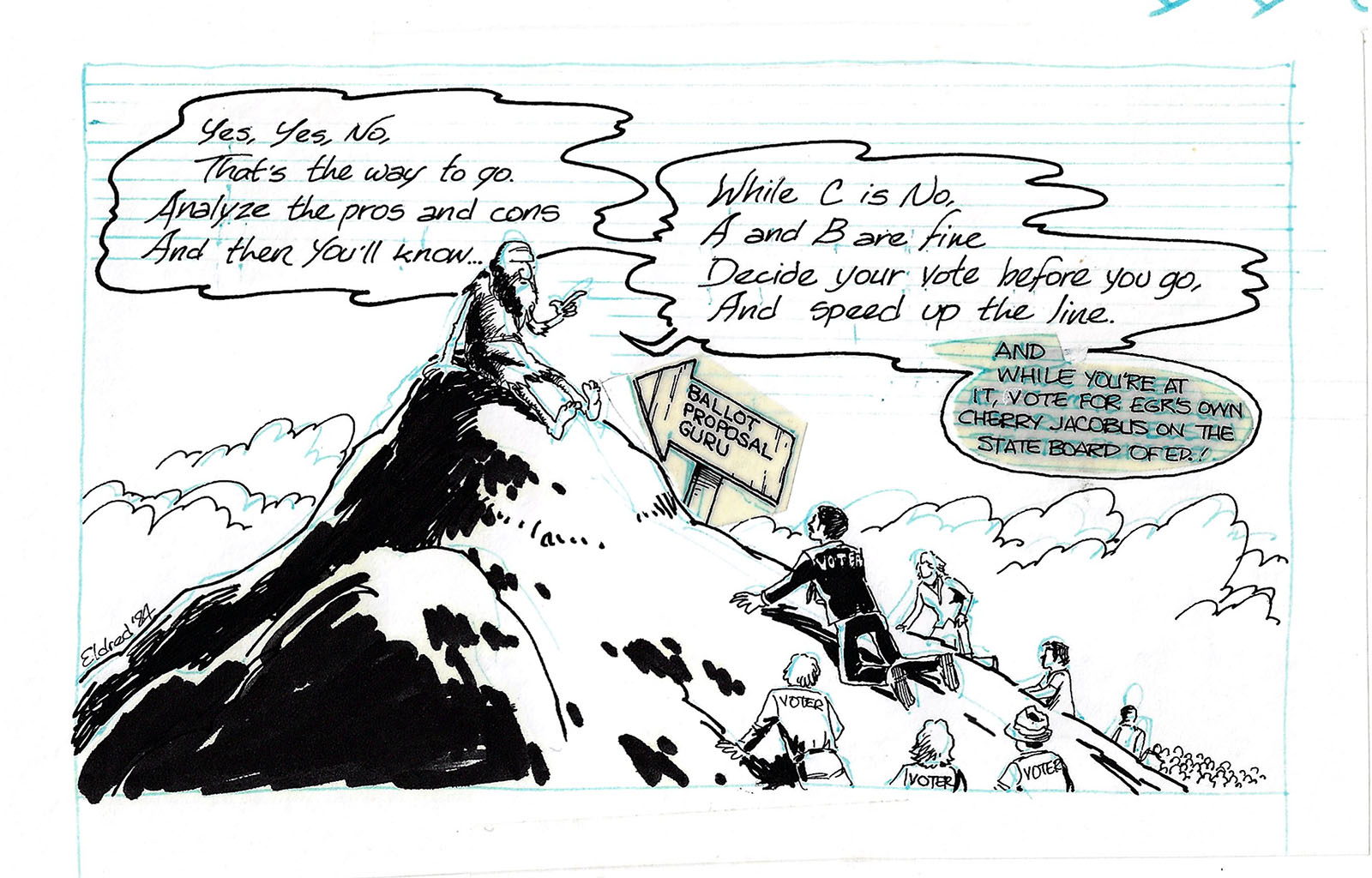 Advice for Michigan ballot proposals in the 1984 election. 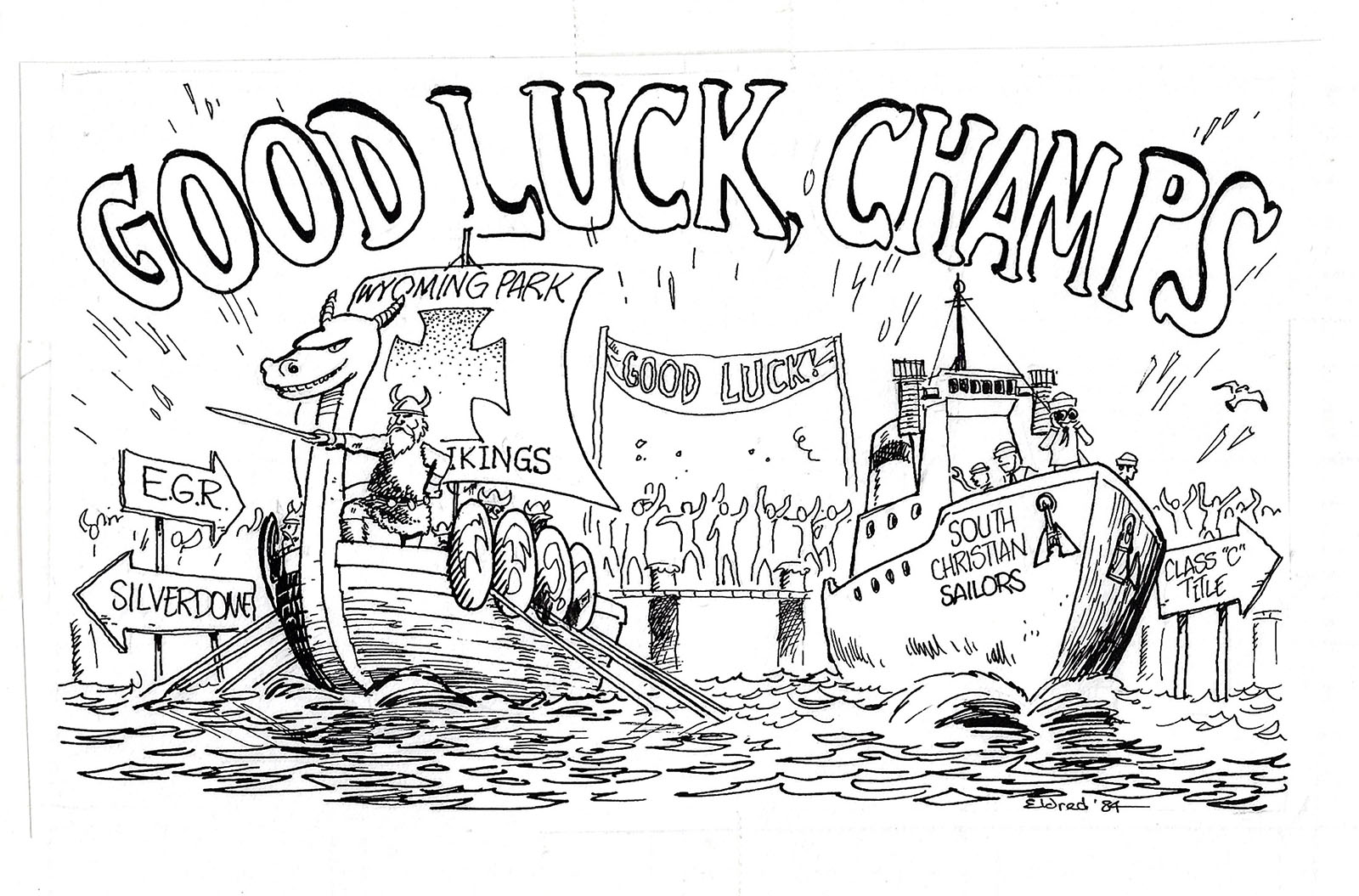 A boost for local sports teams. Susan had a son in high school football at the time. 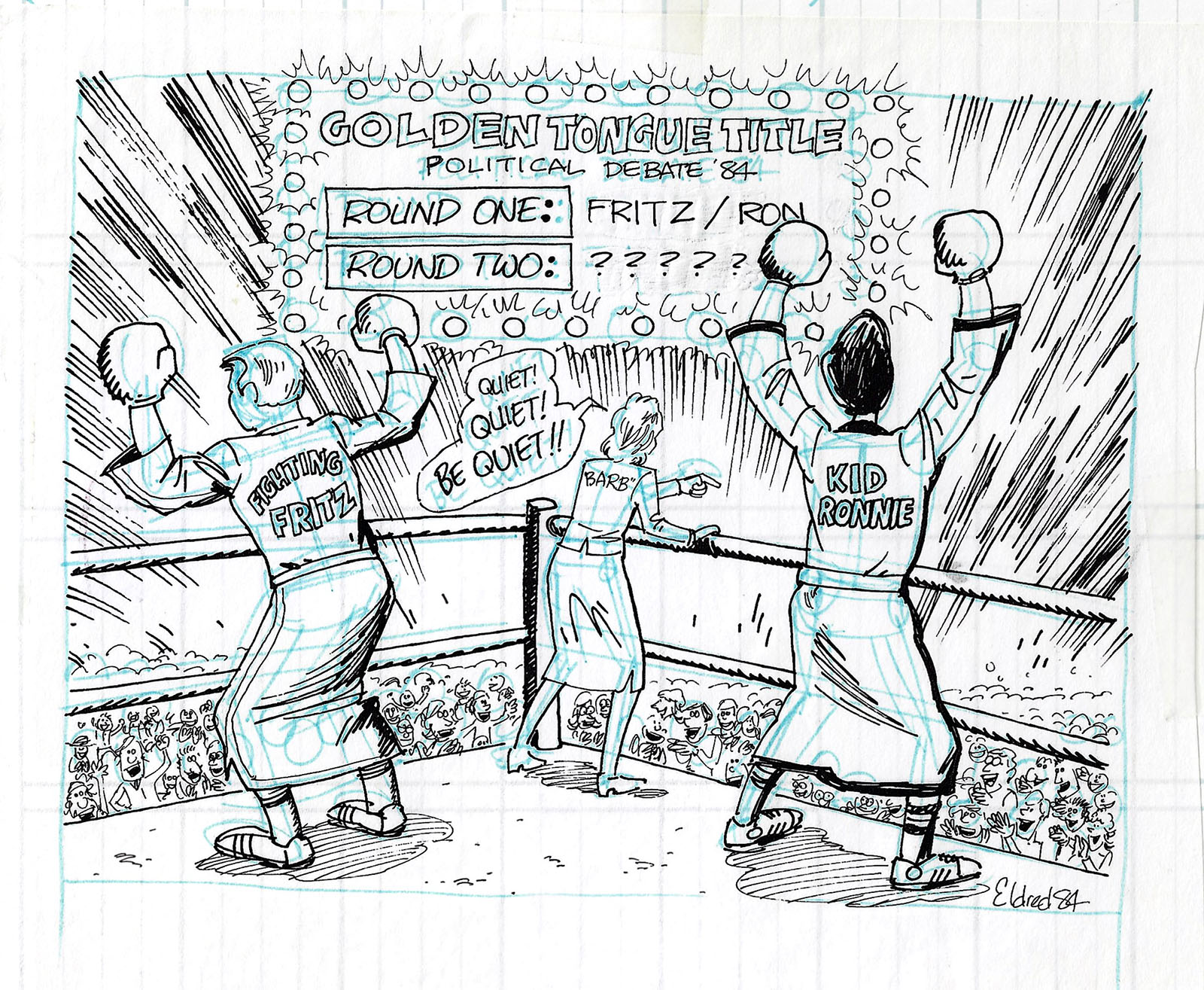 Ronald Reagan vs. Walter Mondale. FIGHT! 1984 was the first presidential election that I remember hearing about as it was happening, and the first one I was old enough to vote in. But I didn’t vote that year, since I didn’t feel informed enough to make a valid decision. Wish that sentiment was more common. 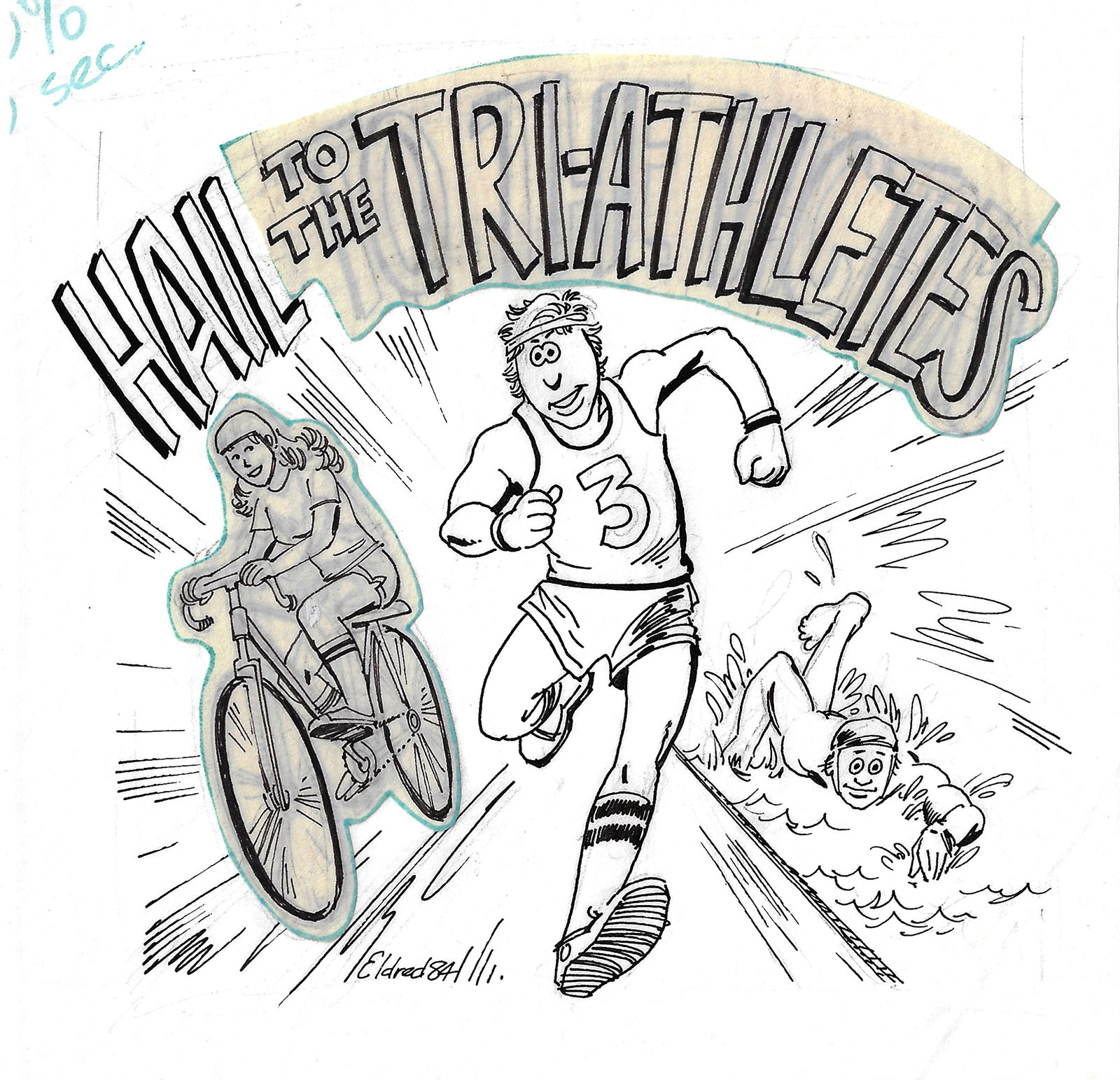 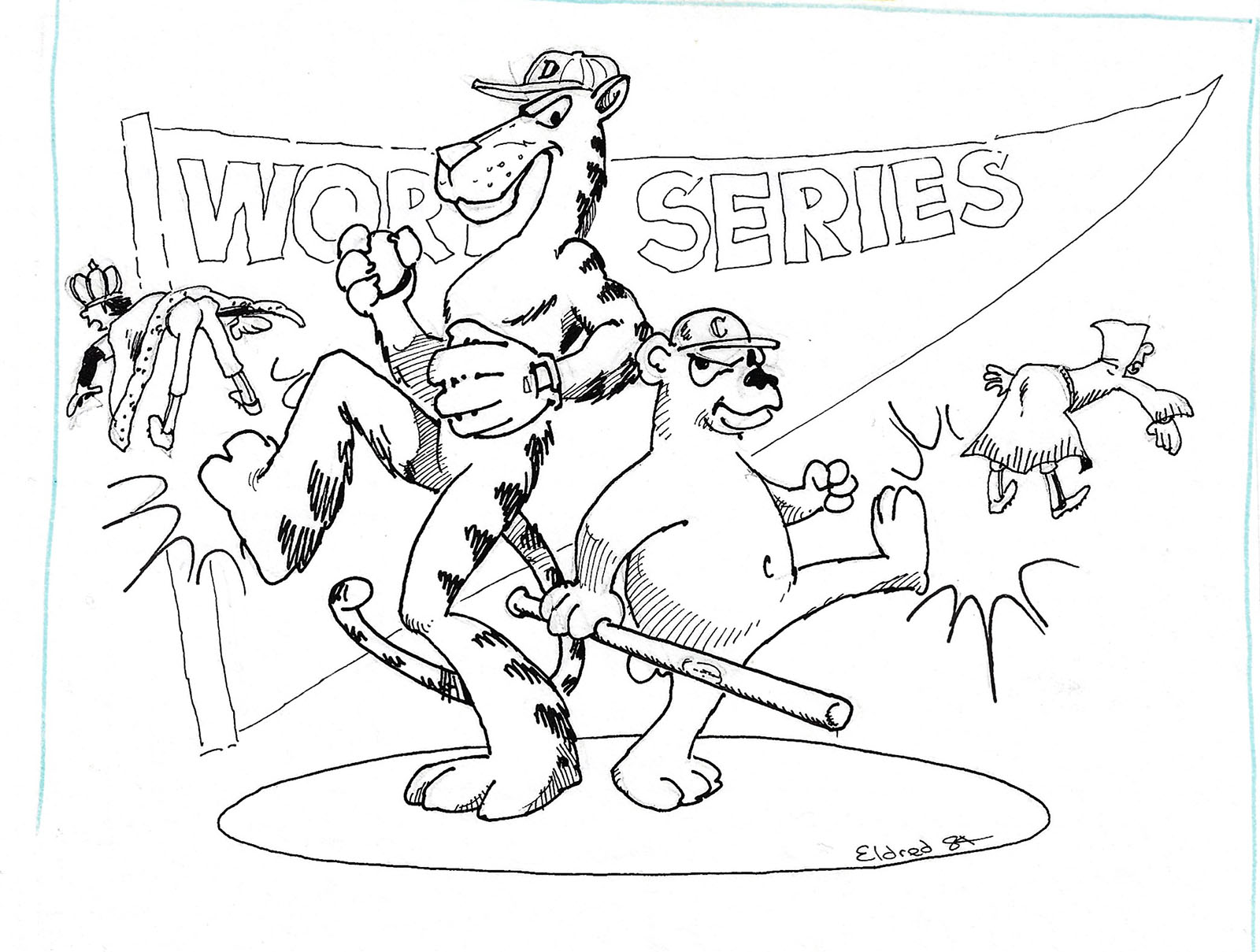 Tigers vs. Cubs. I guess they defeated the Kings and Padres on the way to the World Series of Sportsball. Or whatever. 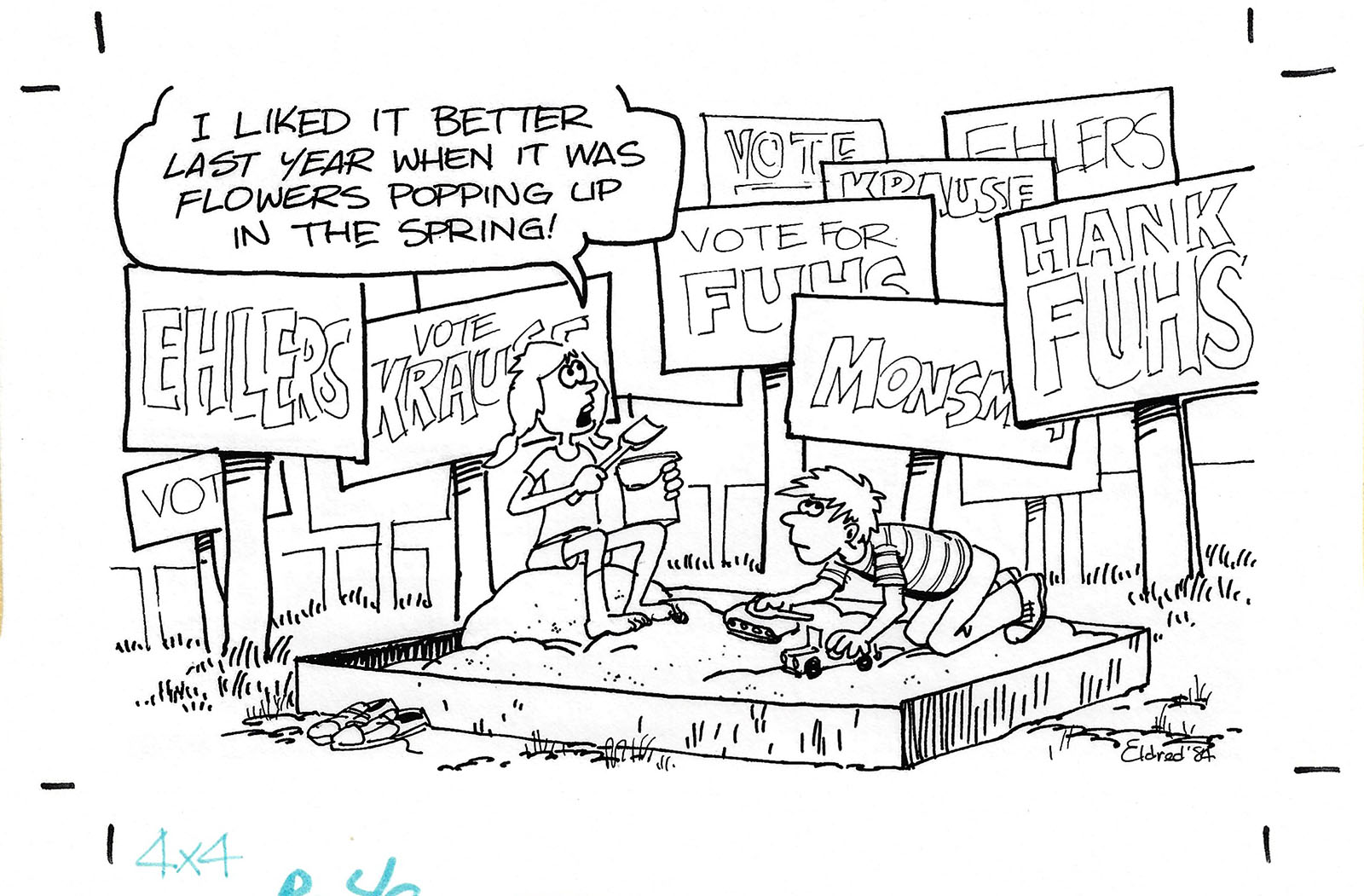 A comment on yard signs for local elections. I remember these names, but they’re all ancient history now. 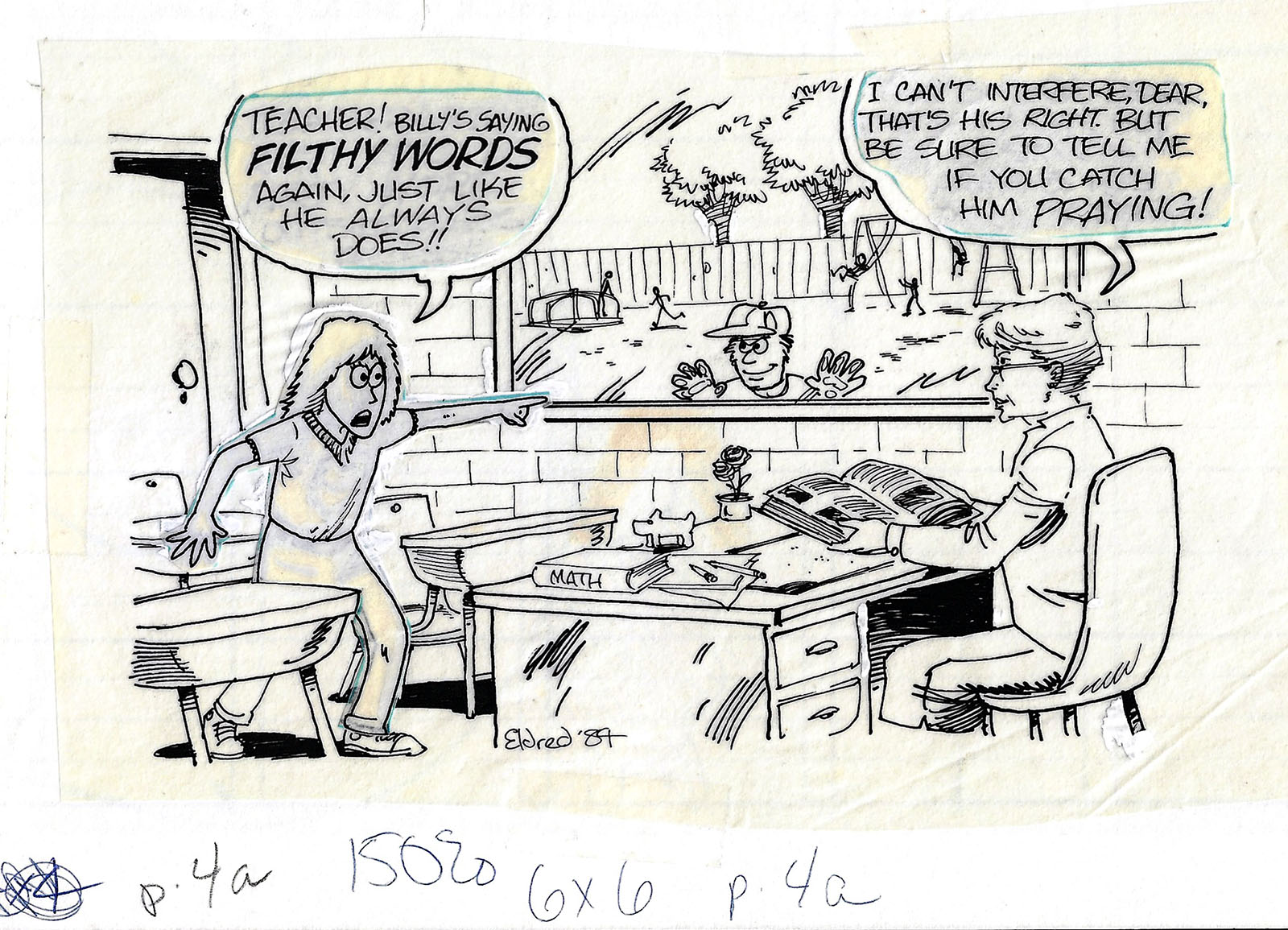 School prayer is most DEFINITELY an issue I developed an opinion on. These days, I would decline to draw this one. I do remember basing the schoolteacher on one of the women who worked at the paper. 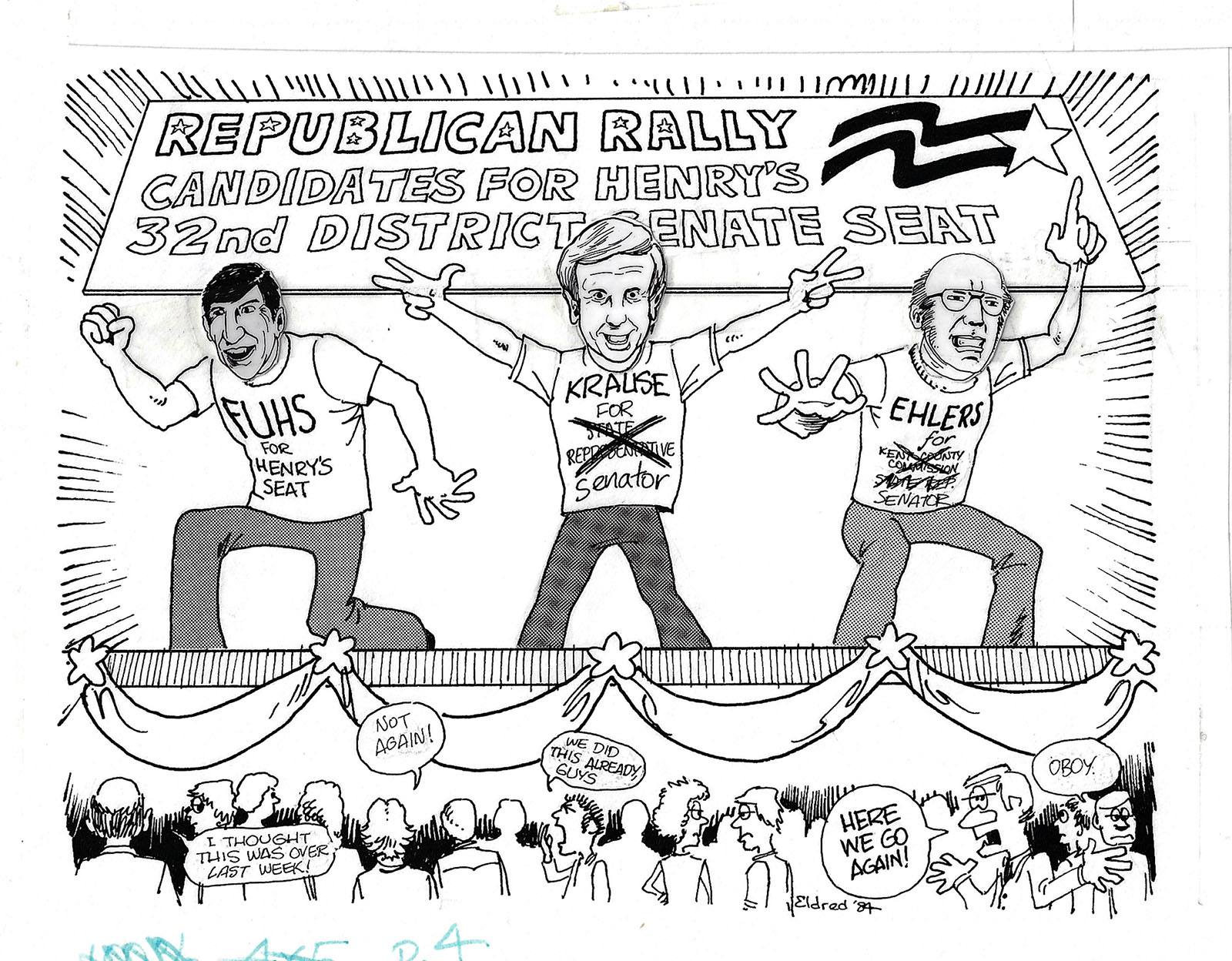 This must have been for a special election shortly after the national. Which I just found tedious and tiresome. 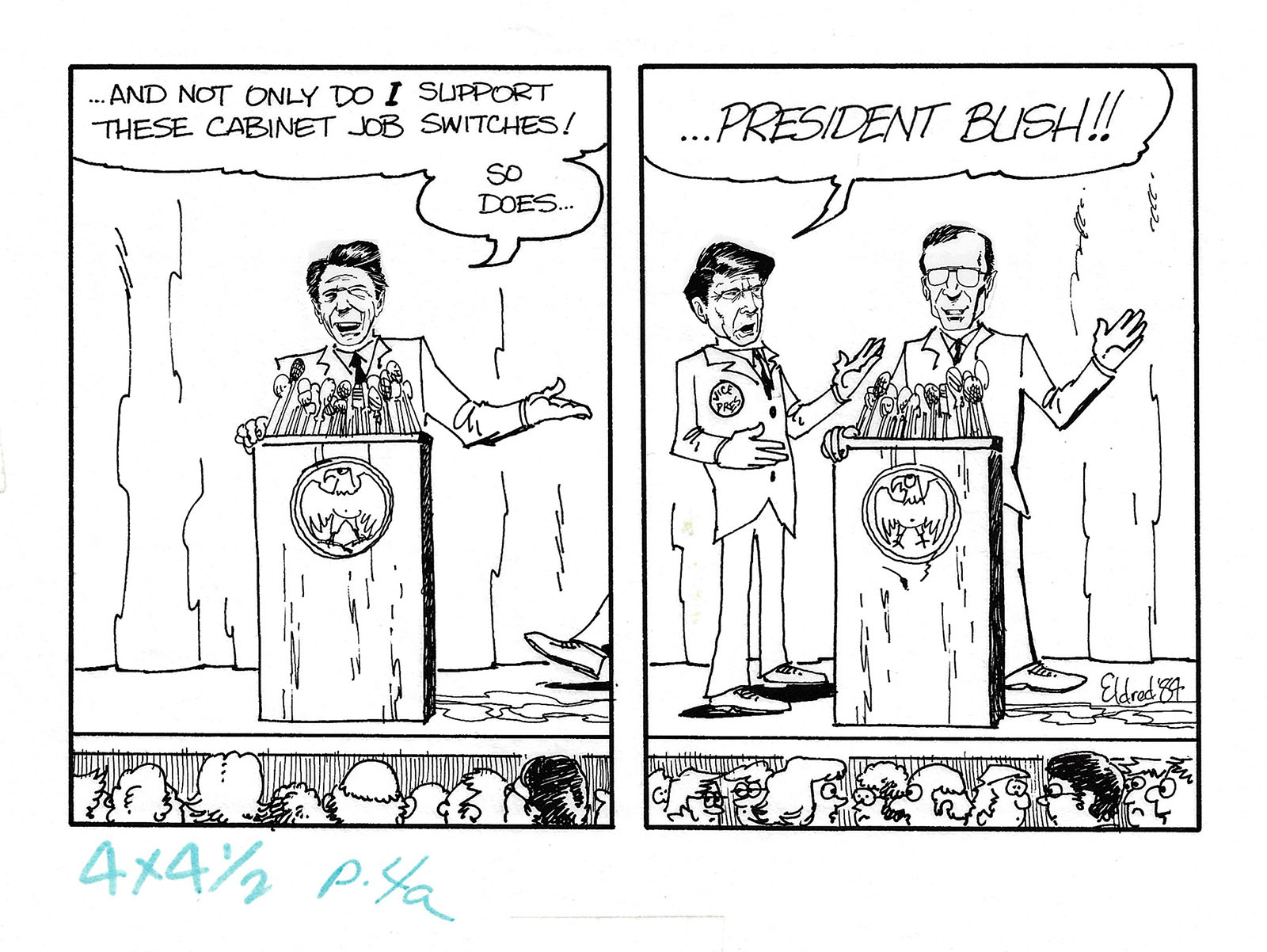 Yech. Reagan and Bush. When Reagan died in 2004, I mentioned it to my then 15-year old daughter. Her response was, “Who was Ronald Reagan?” So we win.

When the newspaper reached its 10th anniversary, I designed a T-shirt that was offered in a prize giveaway to subscribers. 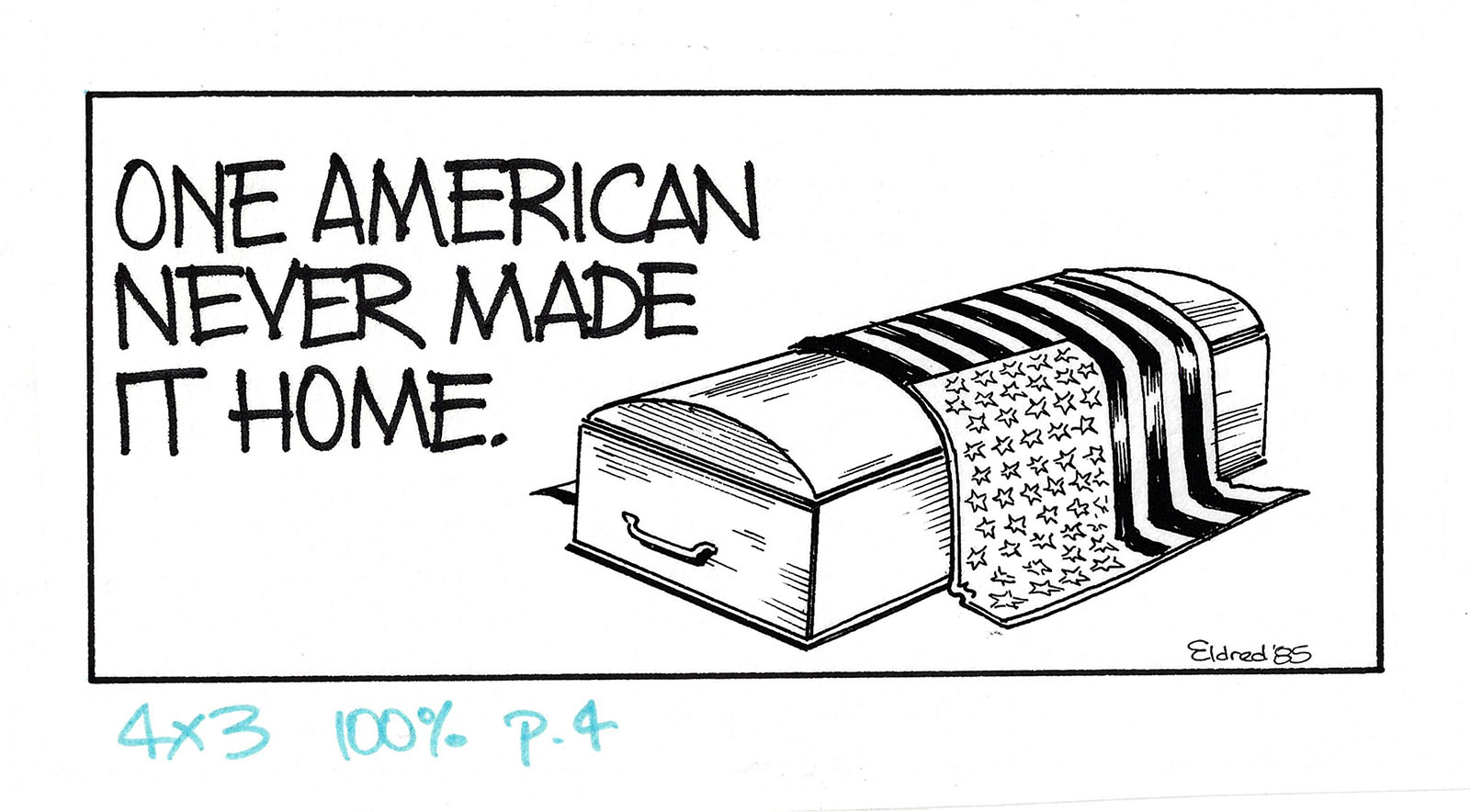 Sadly, this could have referred to many events. I don’t remember which one now. 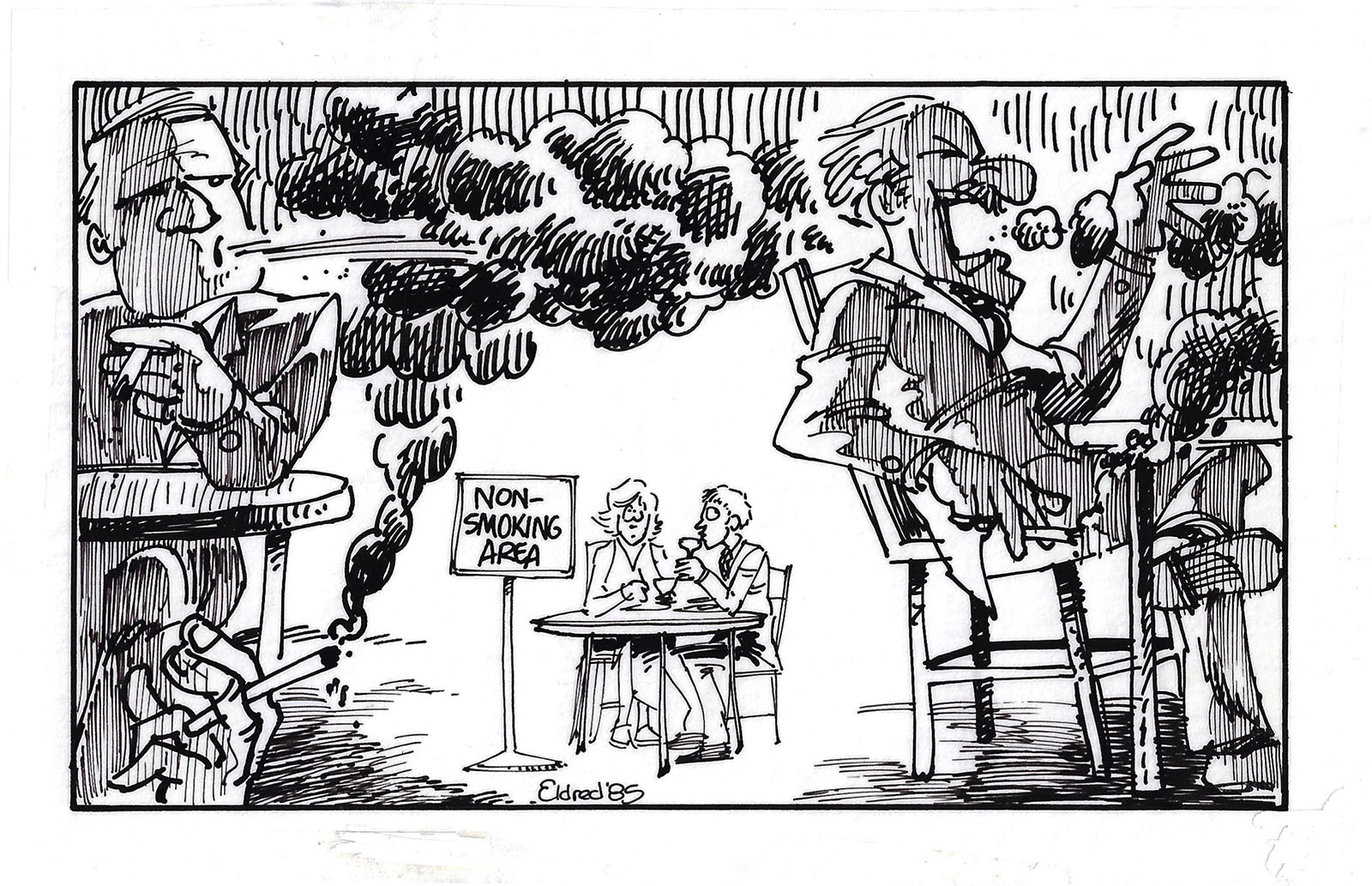 Hey, this was a fight we non-smokers definitely won in the end. Good for us.

I don’t think there’s been much evolution on this, other than the “drink responsibly” tags on TV commercials.

Most likely a thank you for door-to-door contributions to student causes. 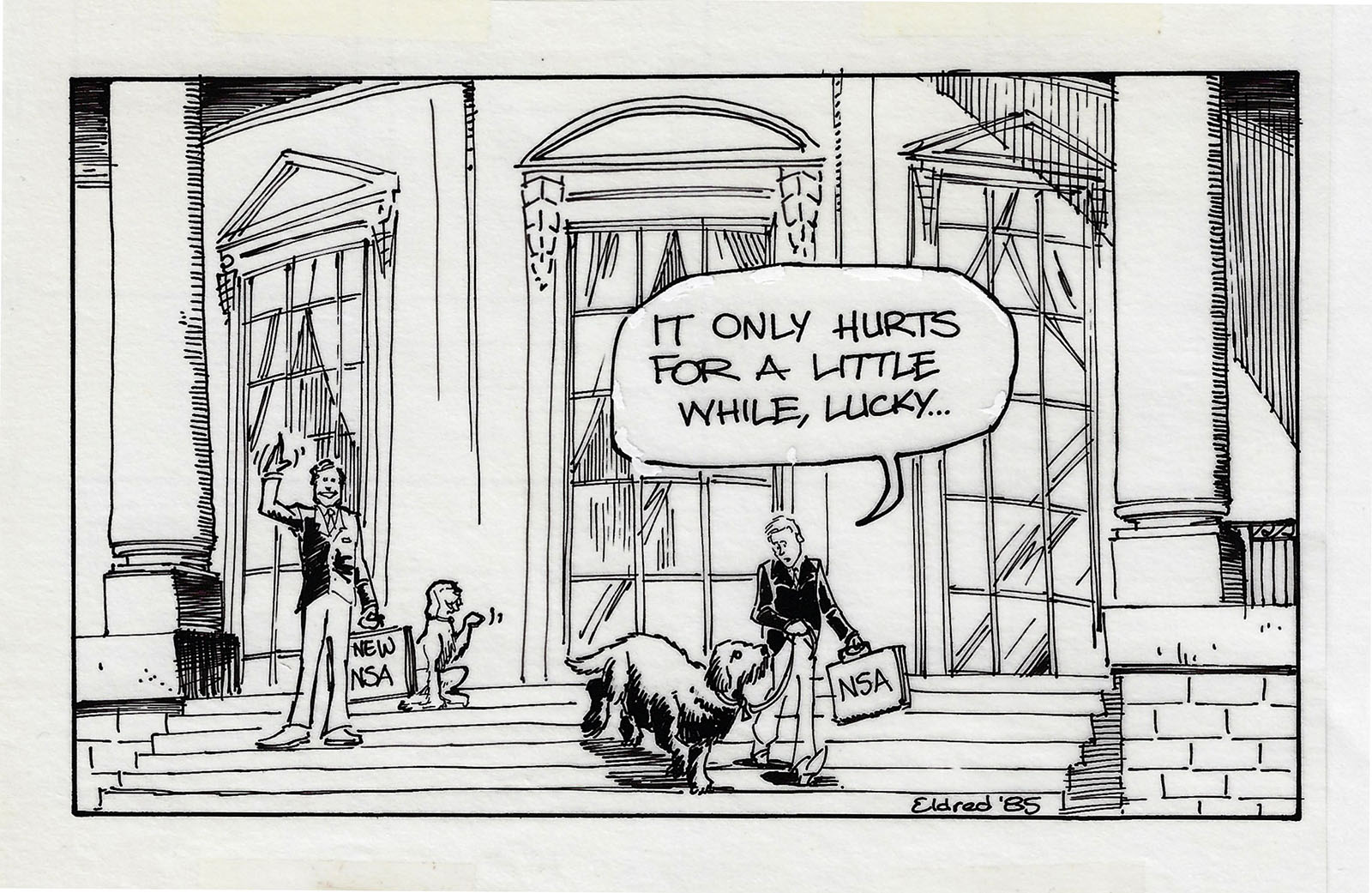 Changing of the guard at the White House. Reagan’s dog Lucky was also moved out after growing too large. 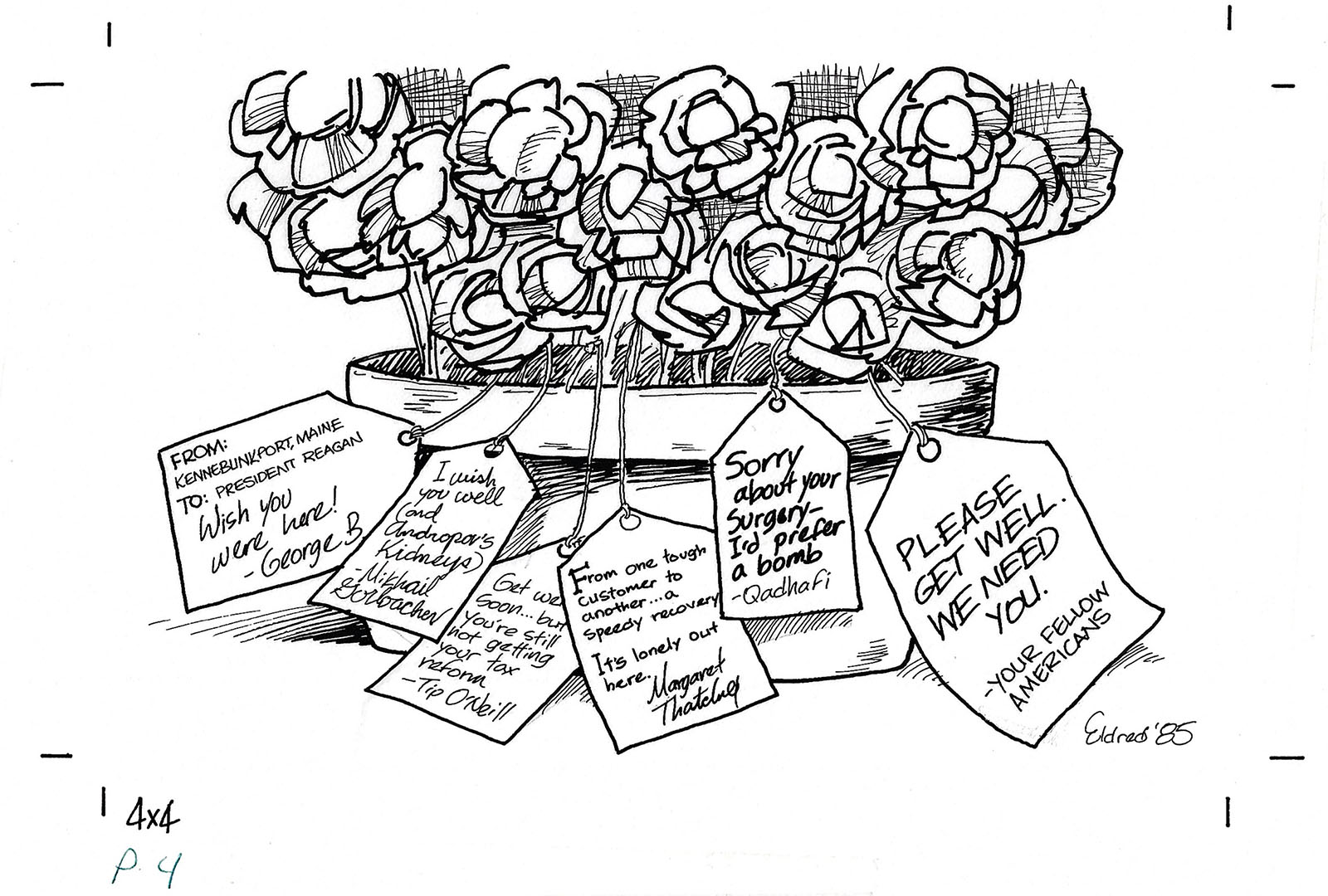 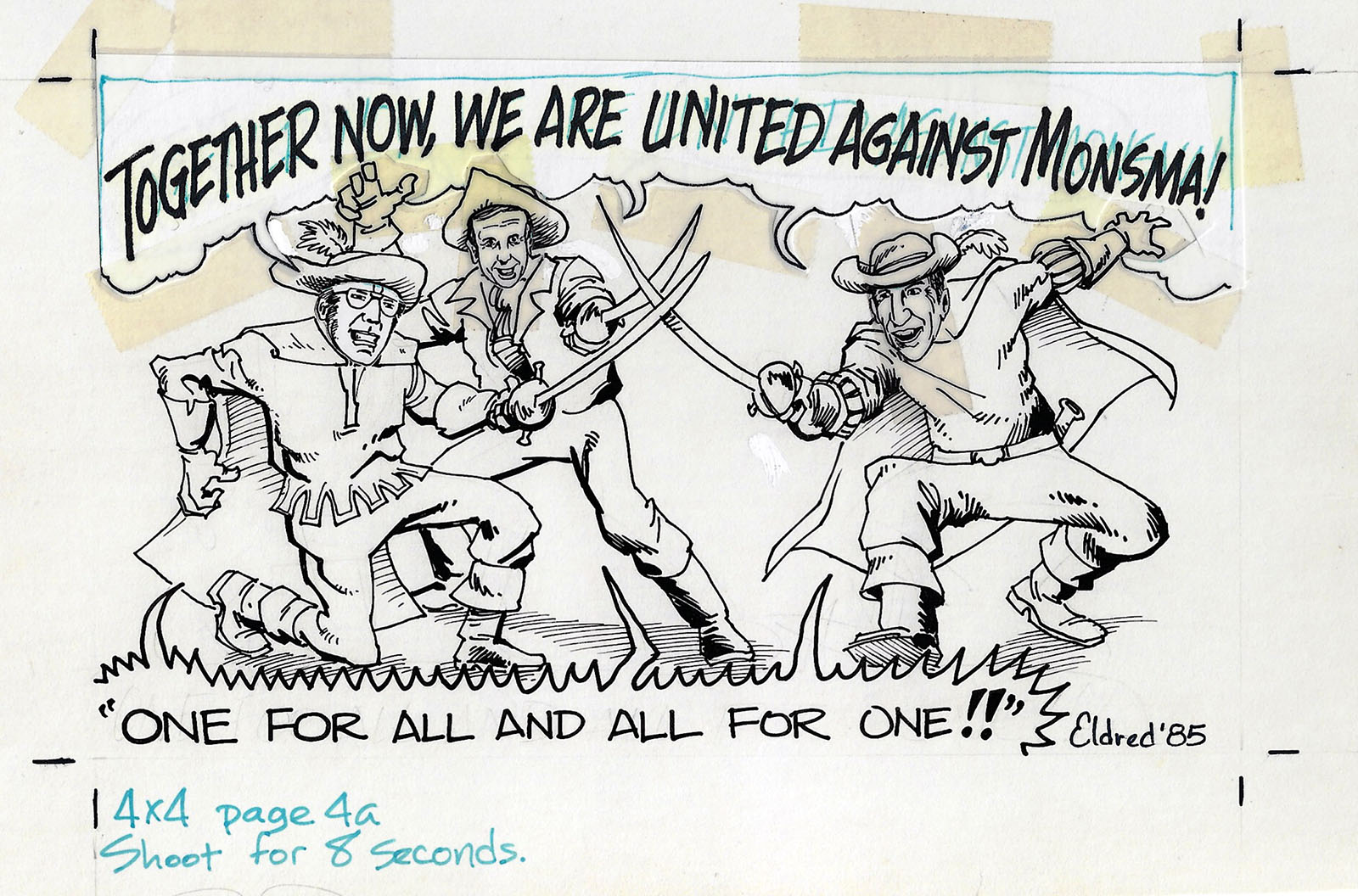 More special election commentary. I was able to reuse the face art from the previous cartoon so I didn’t have to capture their likenesses again. 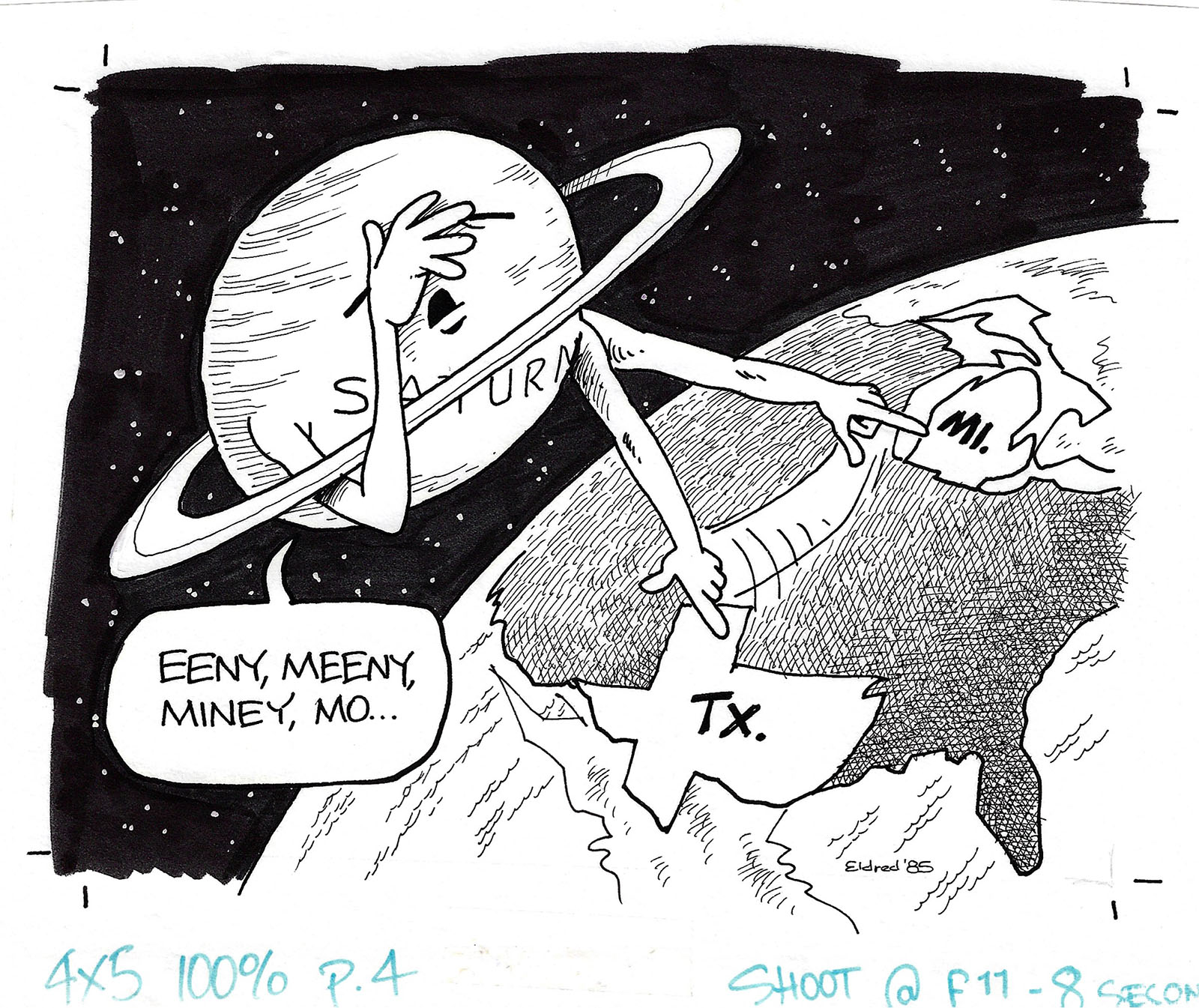 The Saturn car company was choosing where to set up its new plant. Neither Michigan nor Texas would get it. 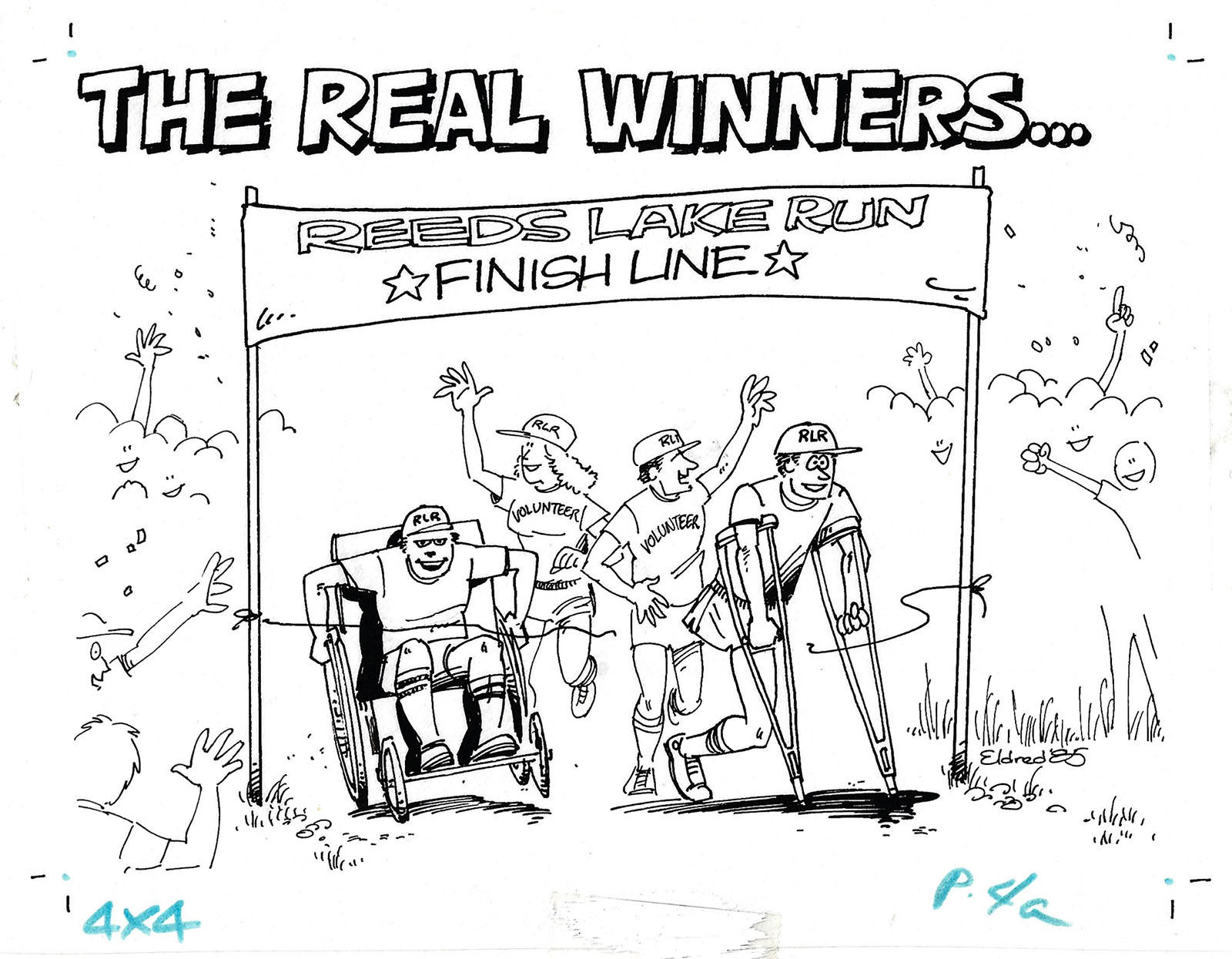 Local sports. Remember, East Grand Rapids had its own lake. 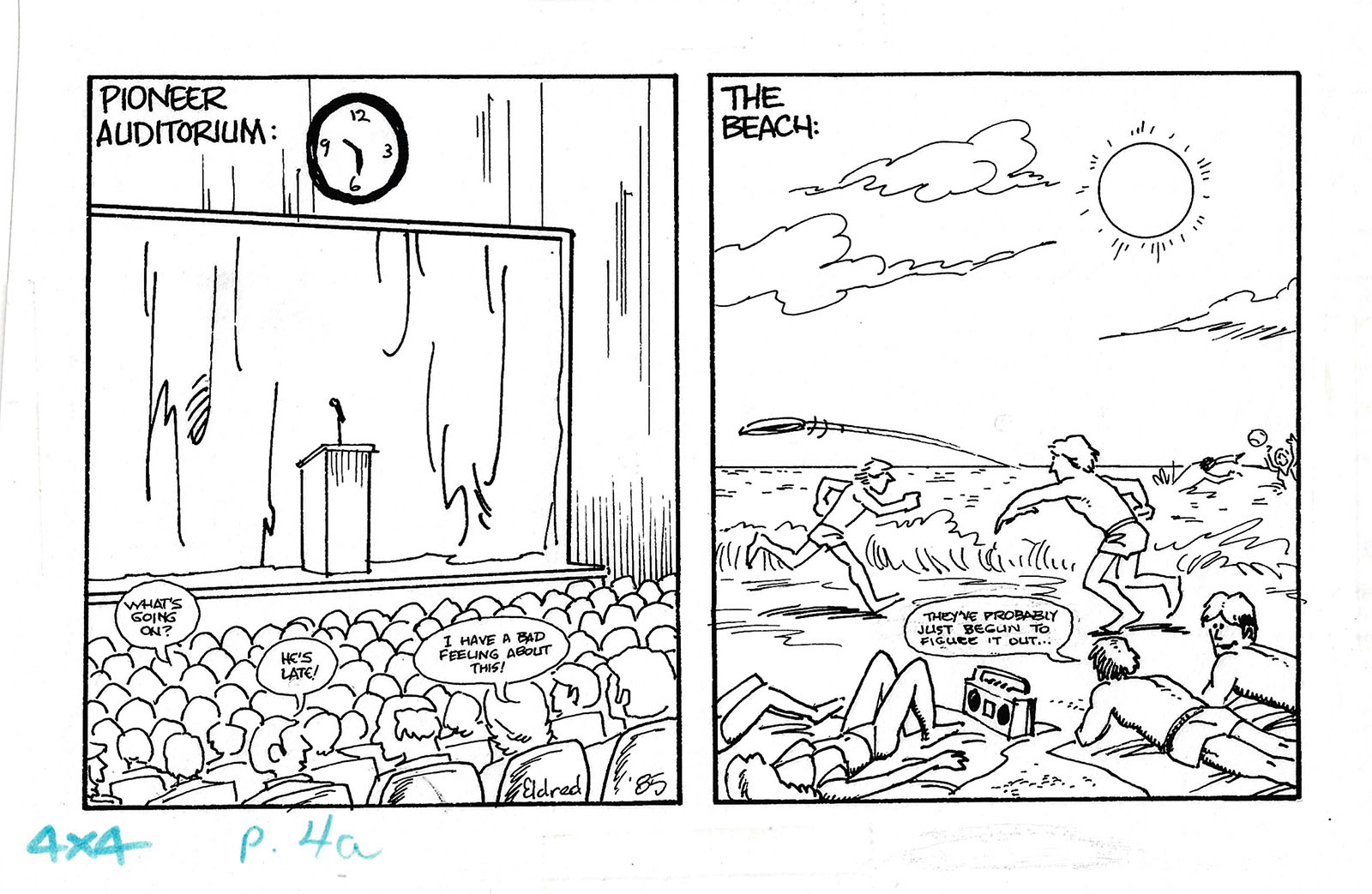 Probably a comment on lax participation by the local school board. 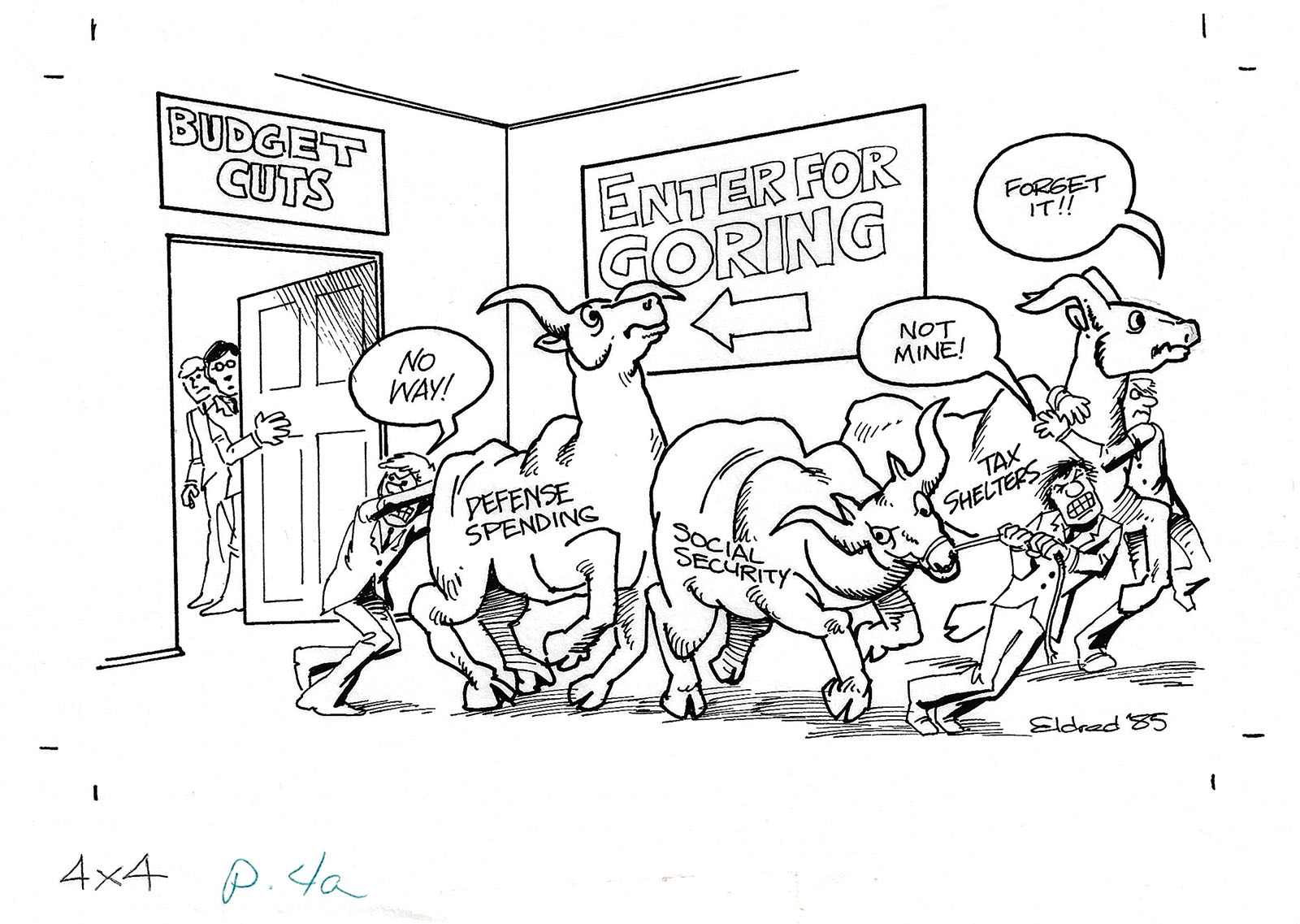 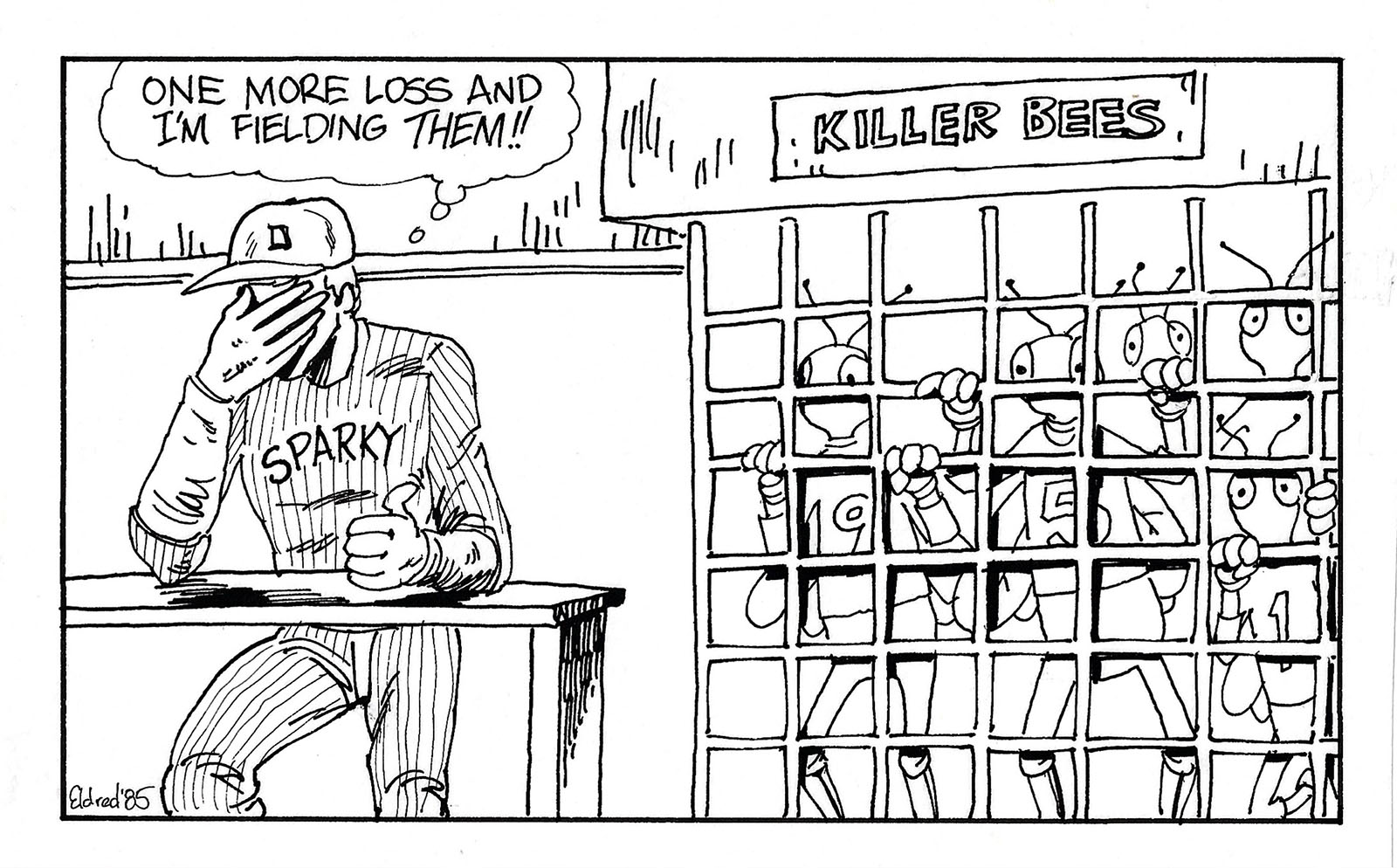 Sparky Anderson was the coach for the Detroit Tigers in ’85. I think the joke was that the starting lineup was falling apart and he was forced to rely on the B team. Get it? 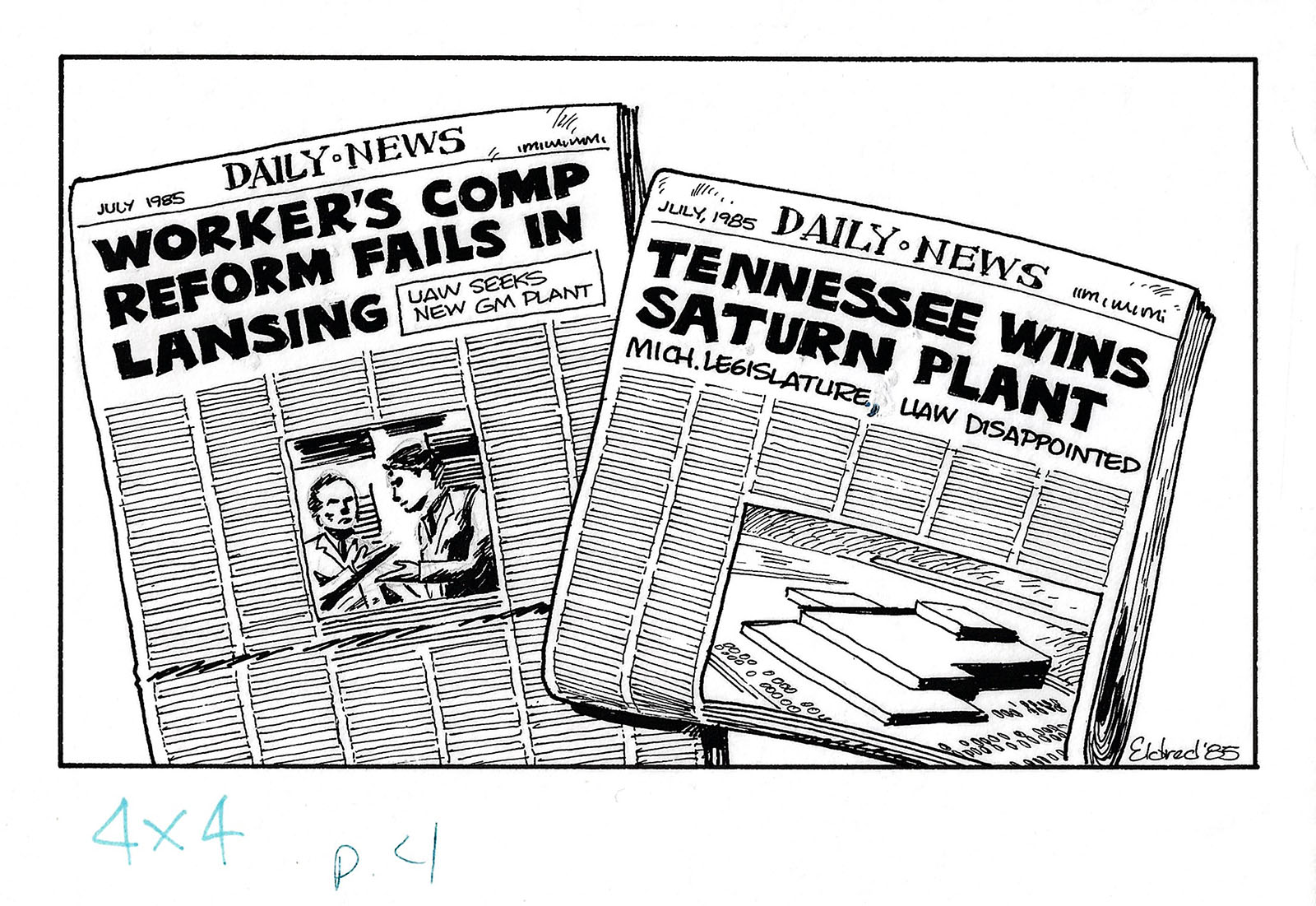 Car company woes. Auto Workers Union takes it on the chin. I guess. I cared as little about cars as I did about sports. But in ’86 I moved over to the Detroit side of Michigan and oh boy did I get an education.

This set represents one third of my total cartoon output for Cadence. So…more to come!