And finally, the payoff phase. And I mean that in more ways than one.

With these two issues, I had the supreme pleasure of concluding a story that had sat dormant and unfinished for four years. The Votoms version petered out near the end of what eventually became Chaser Platoon #4 and for most of the intervening time, I thought I’d never go back to it. Instead, I put my energy into BROID and found my way into my dream career.

It doesn’t make a whole lot of sense, getting almost 100 pages into a project and suddenly dropping it just as you’re getting to the payoff part. Even if it never gets published, at least you get the thrill of seeing it come together. But in retrospect, I’m glad it went that way. Because it took some of the bite out of the repetition part.

So what’s the repetition part? I esplain. 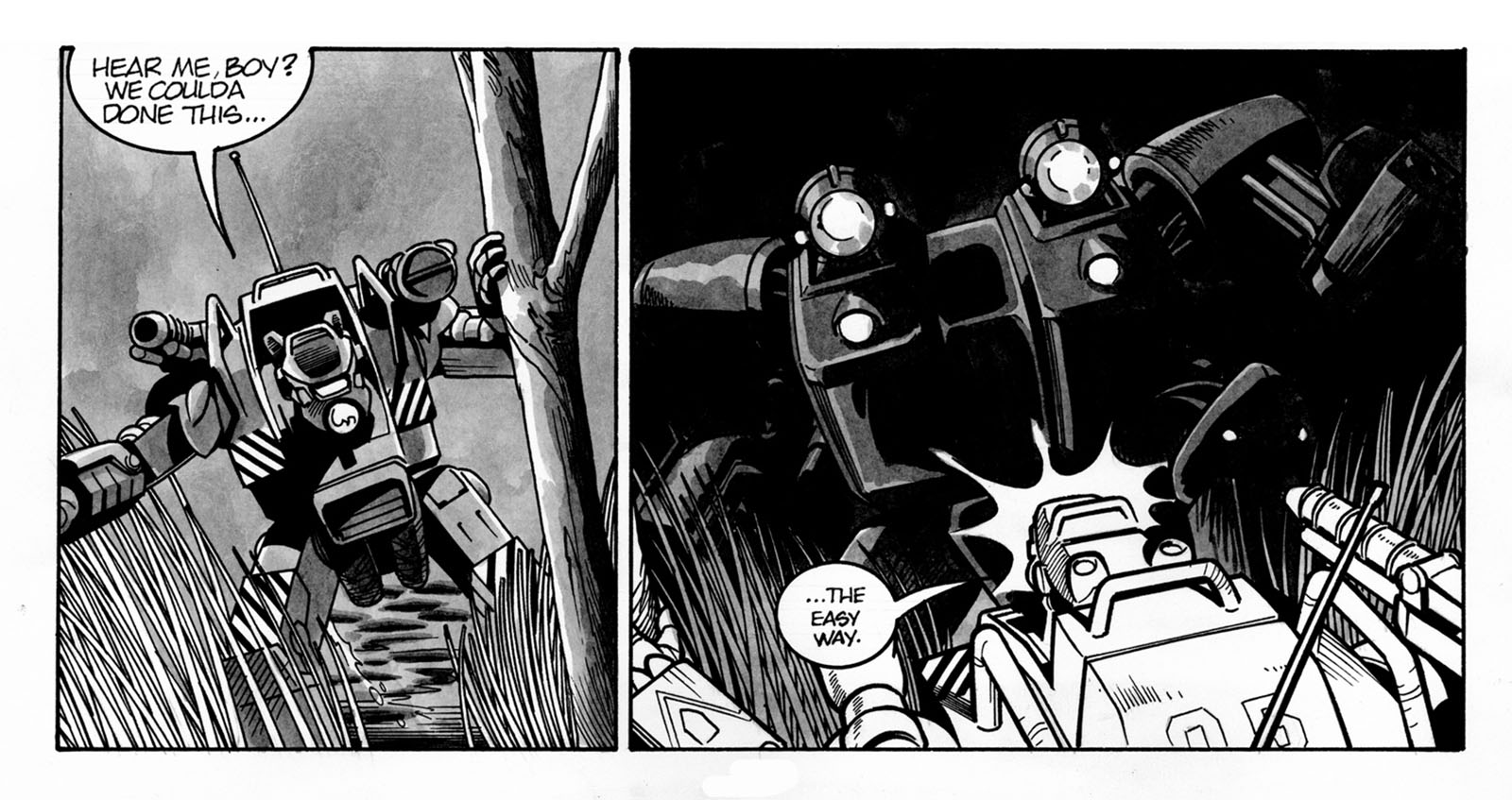 As you’ve seen in previous comic book articles here, nothing gets drawn only once. By the time a finished comic book reaches your seeballs, someone has drawn it at least three times. Sometimes four, depending on their method. Those stages break down like so:

1. Thumbnails: where the pictures in your head are first captured in primitive form, and scenes are blocked out.

2. Roughs: the thumbnails are redrawn at full original size and everything is properly positioned to create finished compositions.

3. Penciling: the roughs are tightened up with all necessary detail (less if you will ink it yourself, more if you’ll pass it along to someone else).

4. Inking: everything is redrawn in ink so it can be mechanically reproduced. 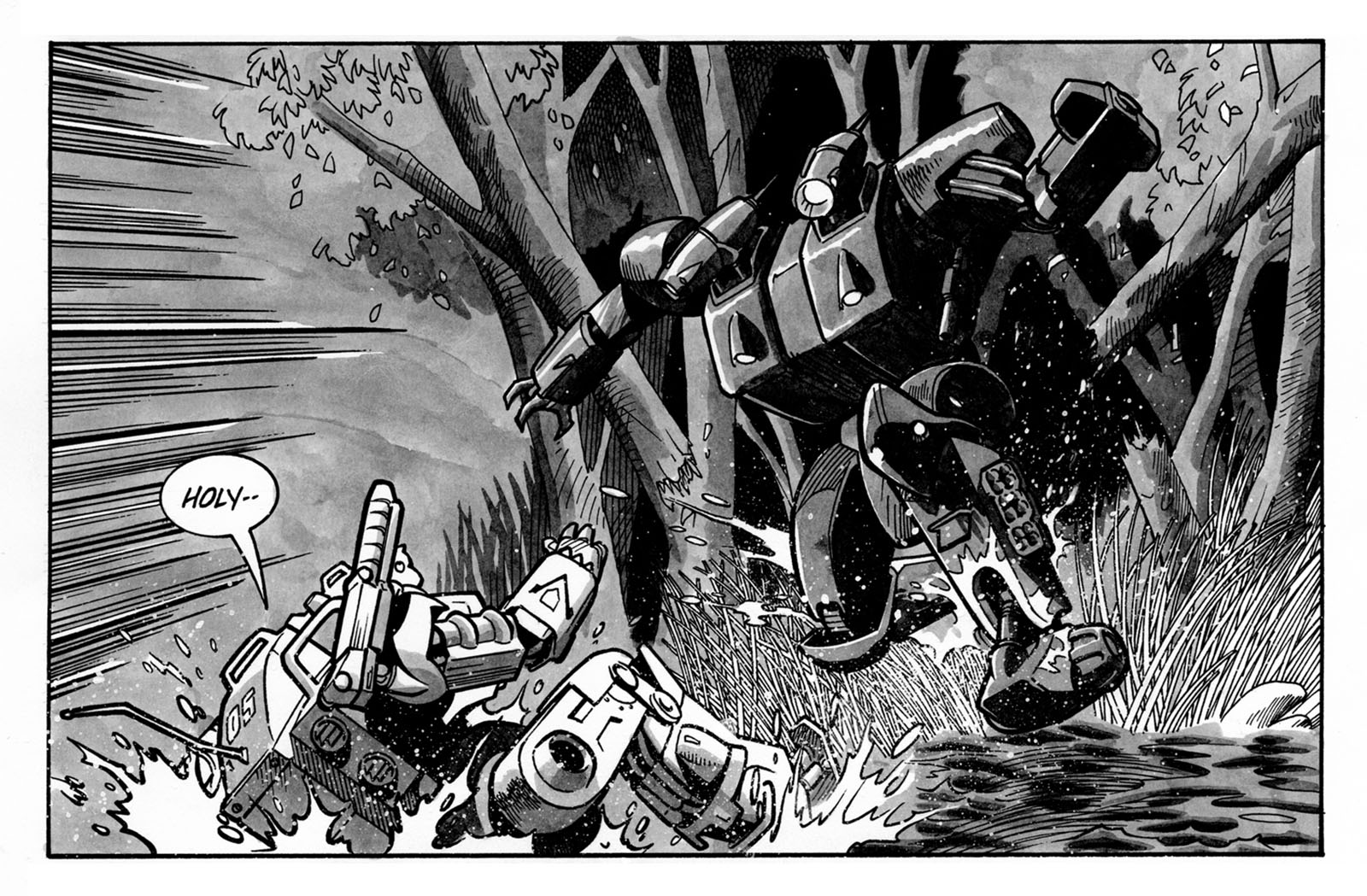 That is, of course, how it was done in the analog days before the computer became a drawing tool. Inking and coloring have sort of fused together since then, but everything up to that point is still basically the same. And lemme tell ya, it can get tedious. You’ve got to be really committed to your work to stay engaged all the way through and give each phase the attention it deserves. If you just can’t bring yourself to do it, this probably isn’t the career for you.

The same is true of the writing process; I’ve found that if you write everything in advance, you take a lot of the fun out of it. For me, the most enjoyable projects have always been the ones that go to script one issue at a time. All the issues have to be outlined in advance so your story stays on track, but scripts are always full of discoveries and surprises. It’s the one place where you can sort of have the same experience as the reader, and that makes it my favorite part.

The fact that only the first four issues of Chaser Platoon were preconceived before I landed a publishing deal is one of the things that kept me engaged. If I’d written all six, I wouldn’t have had nearly as much fun on the last two. Instead, I came into it fresh and excited and stayed that way to the end. Like the courtroom framing device, none of this material was created under the Votoms umbrella. So I still had a chance to be surprised by my own story. 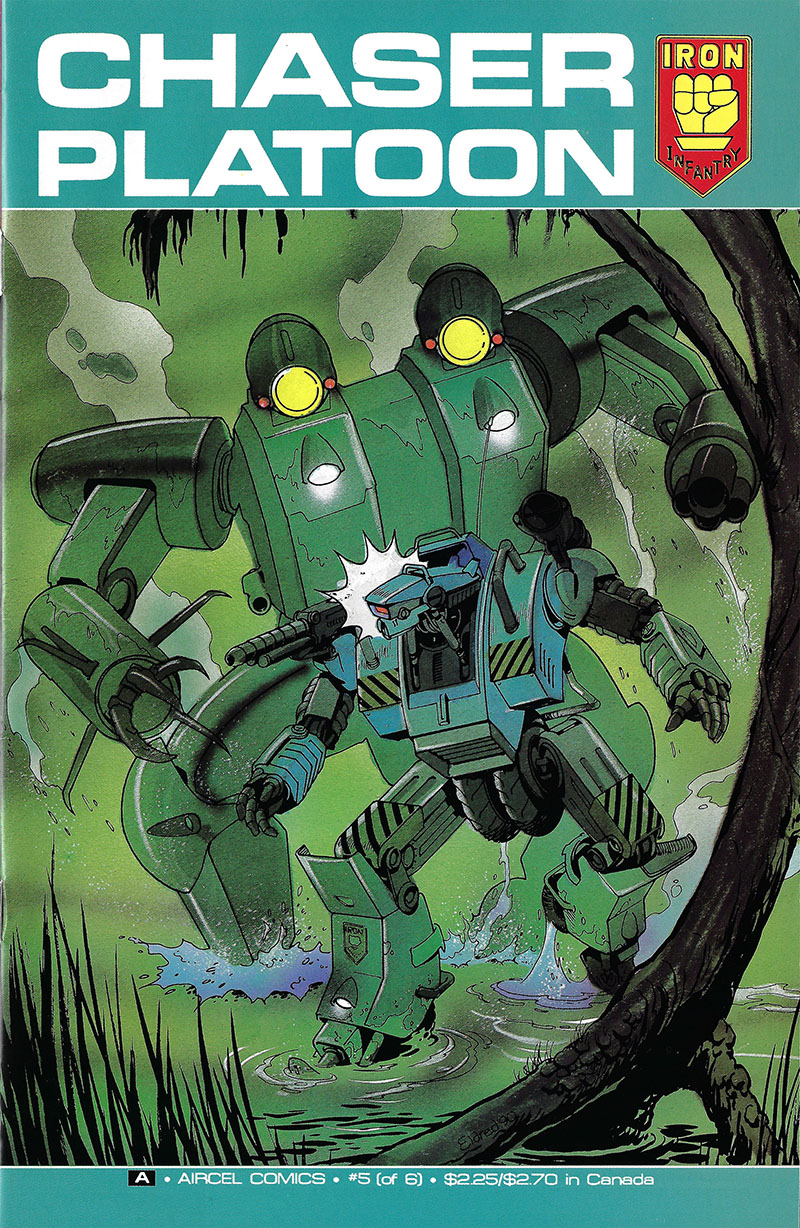 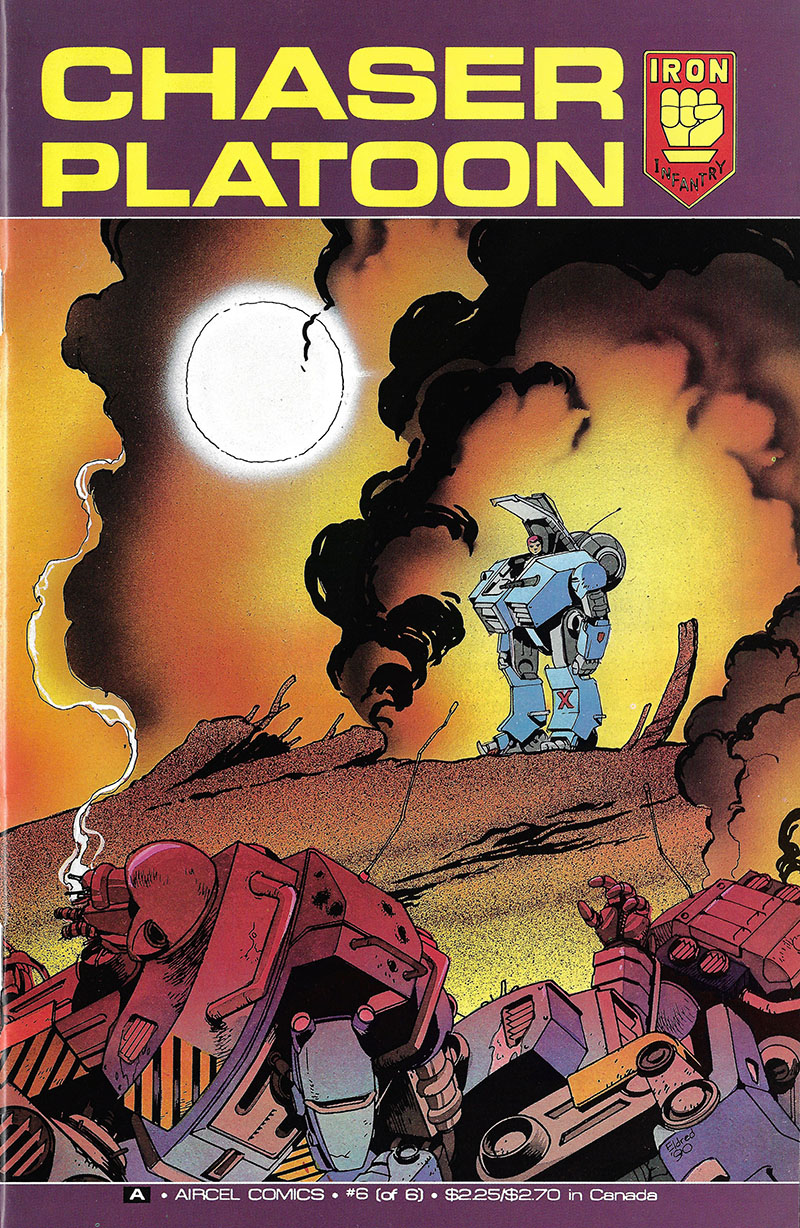 Since Chaser Platoon bears the distinction of being the only original comic from my early years that got all the way to its last issue, it was the only one that could be reprinted later. Two such reprints appeared in subsequent years.

The first was for Clickwheel, an early digital platform that preceded Comixology. In 2008, all six issues went live and I made about 80 bucks. 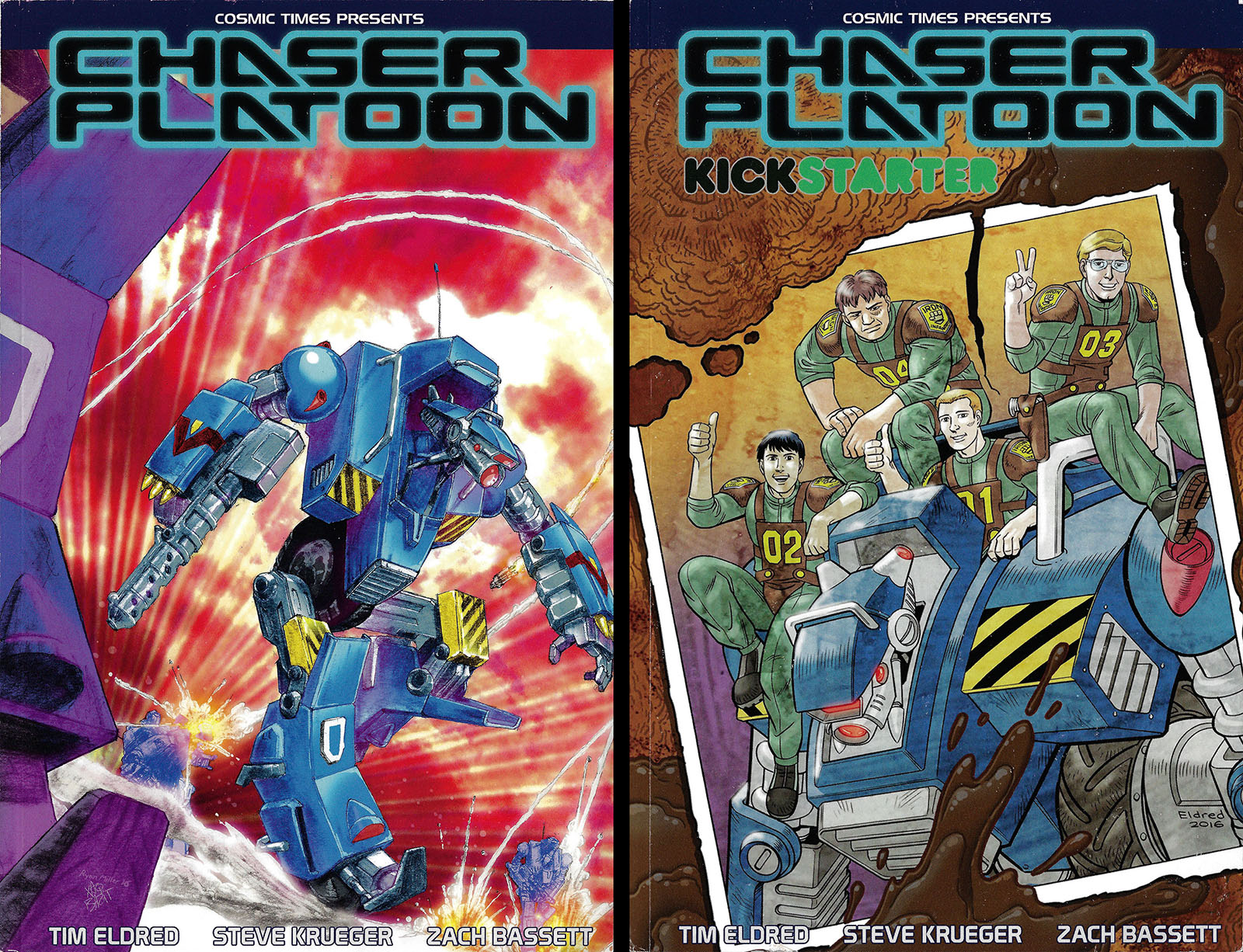 The second was for indie publisher Cosmic Times, who wanted to get it back on paper and color it from start to finish. I didn’t participate in the coloring and it came out just as dingy as I expected. But I did draw a new cover for a limited Kickstarter edition (based on an unused cover design from 1990) and it was published in 2017. Standard edition above left, limited edition above right. I didn’t see a dime from this reprint, but I didn’t expect to. Someone else was paying the printing bill, so it cost me nothing to say yes. Sure would be nice if it always went that way. 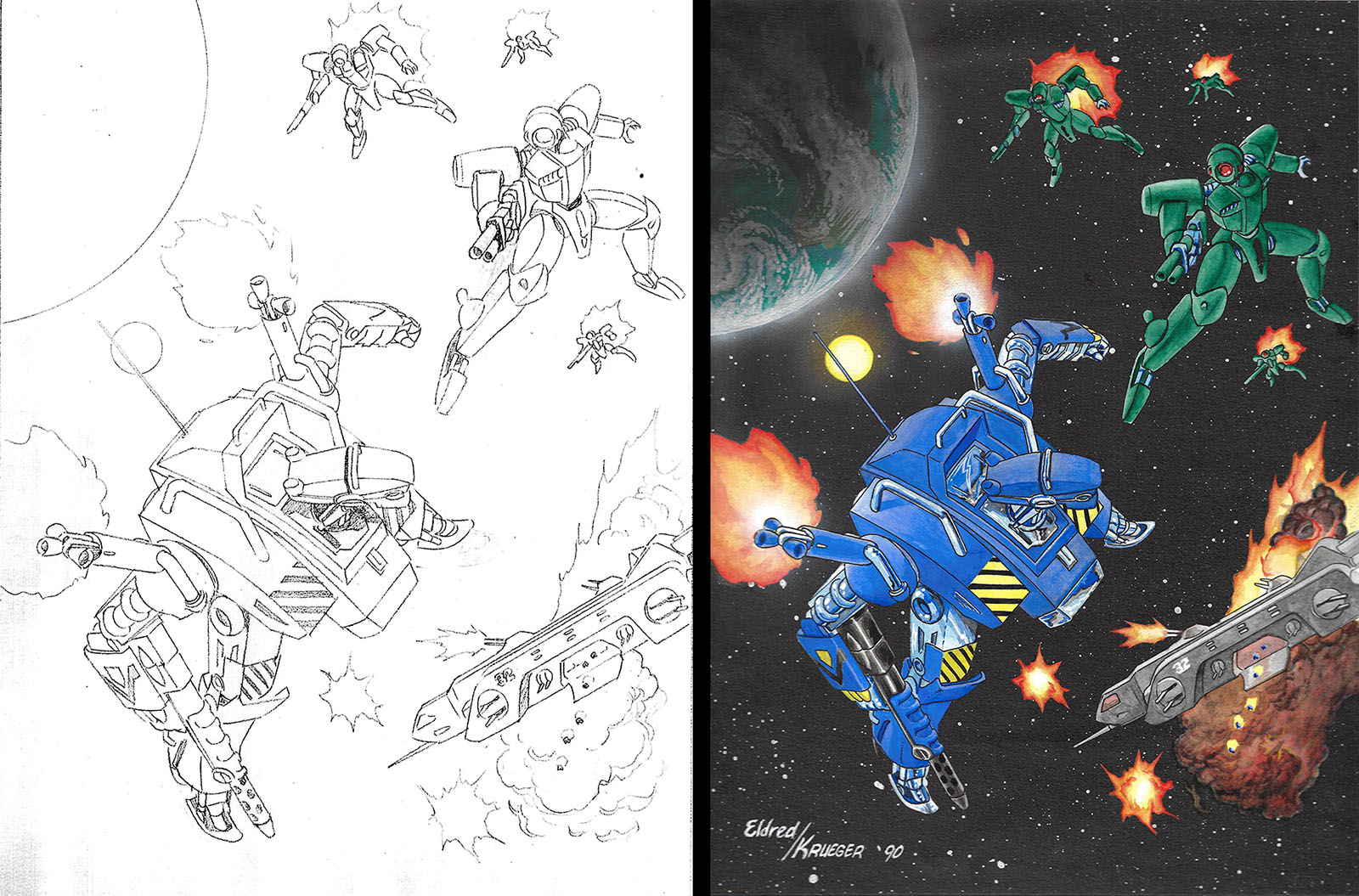