In 1991, I got Malibu Comics to publish a 6-issue series I created, an SF war story titled Chaser Platoon. It was my second creator-owned title, and it bears the distinction of running its full course rather than being cancelled early. This article presents the roots of Chaser Platoon for the first time anywhere. You can call it my Fifty Shades of Grey, since it started out as fanfic for something else: Armored Trooper Votoms. 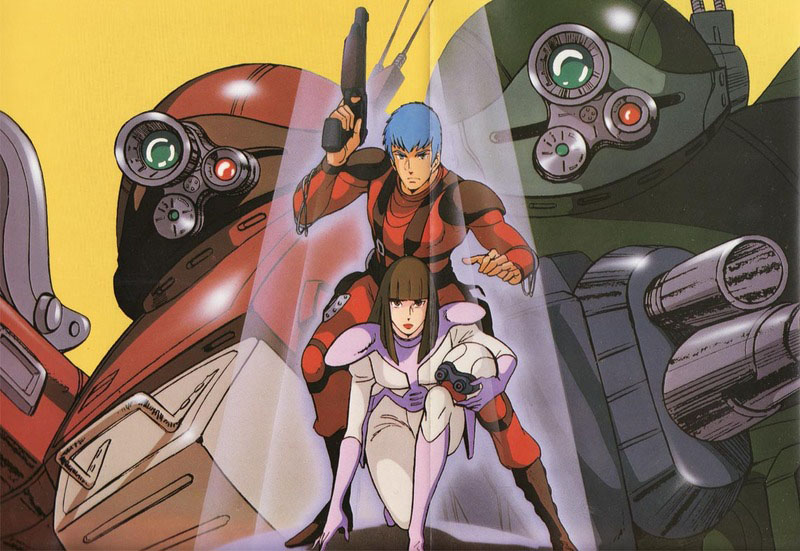 Votoms is my favorite mecha anime series of all time. It debuted in Japan in 1983, and I caught up to it the year after that. It had everything I was looking for: drama, scope, space wars, anti-heroes, intrigue, romance, and (most importantly) some of the best-designed robots on Earth. I’ll have much more to say about it soon in the Anime World section. For now, it’s enough to tell you that I dug this series so much that it replaced Star Wars as my subject for fanfic comics.

The key element in Votoms is the Armored Trooper (A.T.), a humanoid robot about 4 meters tall that is used in interplanetary war. The two factions in this war are the Gilgameth and the Balalant, two giant spacefaring armies. The main character in the story is Chirico Cuvie, the guy pictured above with the blue hair. He’s a soldier on the Gilgameth side who gets caught up in a scandal and is forced to become a fugitive. Prior to this, he was an elite Armored Trooper pilot in a brutal unit called Red Shoulder Battalion. The A.T.’s in this unit have a red-colored shoulder on them, hence the name. 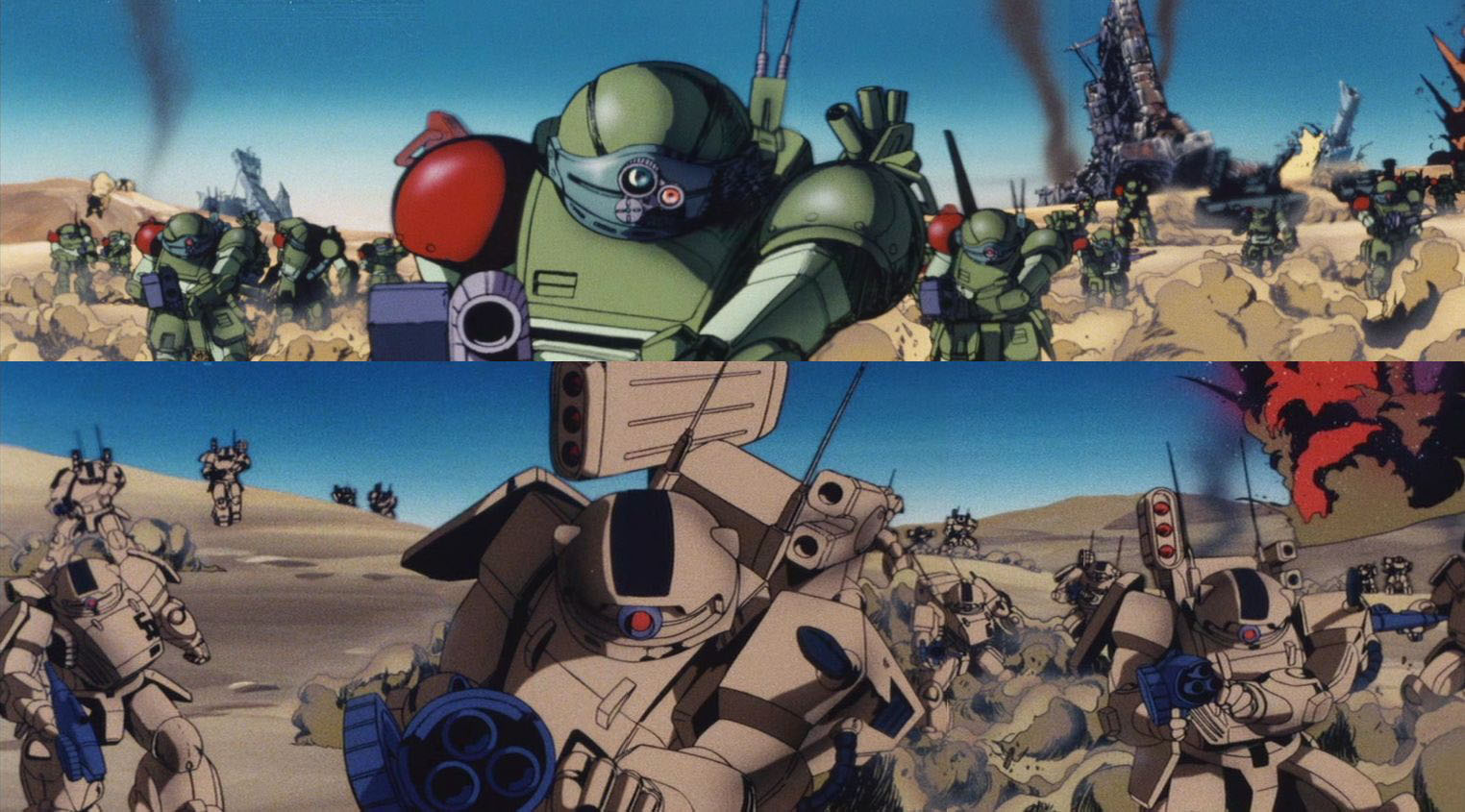 One day I was flipping through a Hobby Japan magazine (December 1985 issue; OF COURSE I still have it!) and spotted something interesting. An article on Votoms model kits showed a customized version, repainted with a gold shoulder in place of a red one. Story spark!

I didn’t really have a plan for how and where to publish a Votoms fanfic comic. I’d spent the last four years doing Star Wars comics for amateur-press fanzines, and now that anime fandom was expanding I guessed maybe I could do my own Votoms ‘zine. (I’d already started publishing my Votoms Viewer’s Guide in fan circles by this time, so there was a channel.)

The idea was to find Chirico Cuvie in an earlier time frame, when he was 13 years old and already showing amazing prowess as a child soldier. Strings were being pulled to put him to the test, and an experimental A.T. unit would be assigned to this task without actually knowing their purpose. That was in keeping with the overall Votoms concept; a vast military machine that grinds people up for its own undisclosed purposes, forcing them to confront their own humanity. 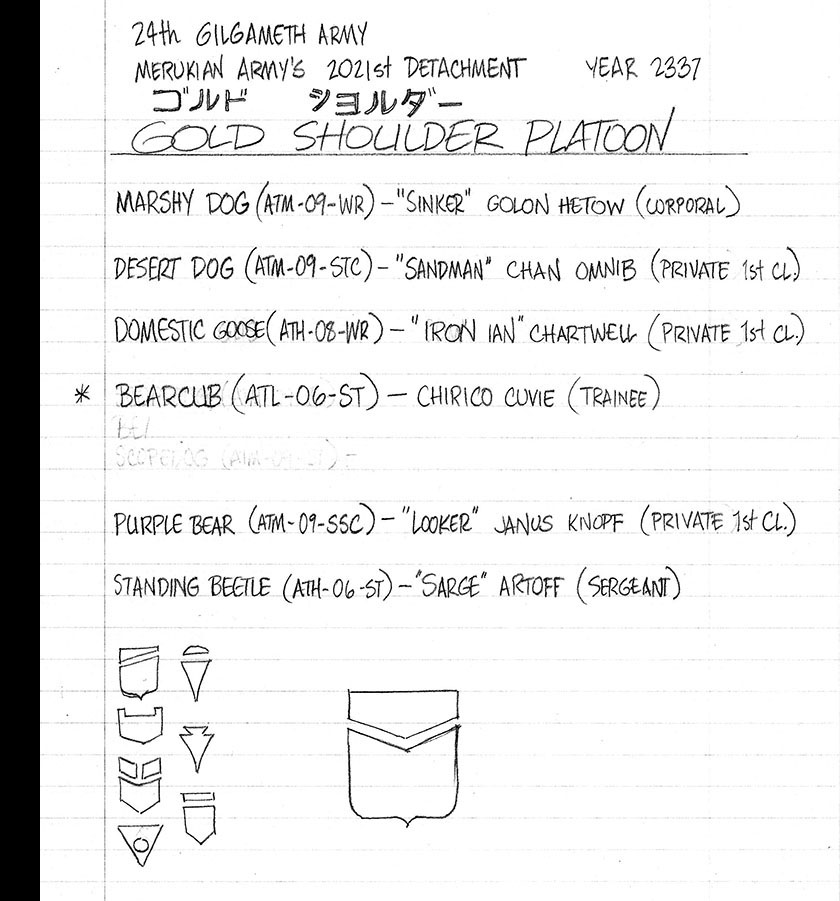 I had a lot of material on hand for study, and figured out which A.T.’s I could put in the story (character/mecha list shown at right). 13-year-old Chirico would need a small one, and the enemy on the Balalant side would have a GIANT one, piloted by two people. The setting would be a sort of R&D planet where both sides threw their latest inventions at each other to see what prevailed. This concept took inspiration from a British comic titled Rogue Trooper (serialized in 2000AD), which was as close to Votoms as anyone in the western world had gotten so far.

Once the designing was done, I started working on the story, roughing it out and writing it on the fly. Making Star Wars comics for SF fanzines had been my incubator, helping me find the best way to construct stories. I wasn’t yet writing scripts, but I’d definitely figured out that roughing out pages was much smarter than drawing without a plan.

When I got going on The Mission of Gold Shoulder, I was totally submerged in the Votoms universe, creating the best story I could with the background info I had. It remained pretty much in compliance until about twenty years later when anime sequels started delving into Chirico Cuvie’s childhood. But by that time, Gold Shoulder had already evolved into Chaser Platoon. 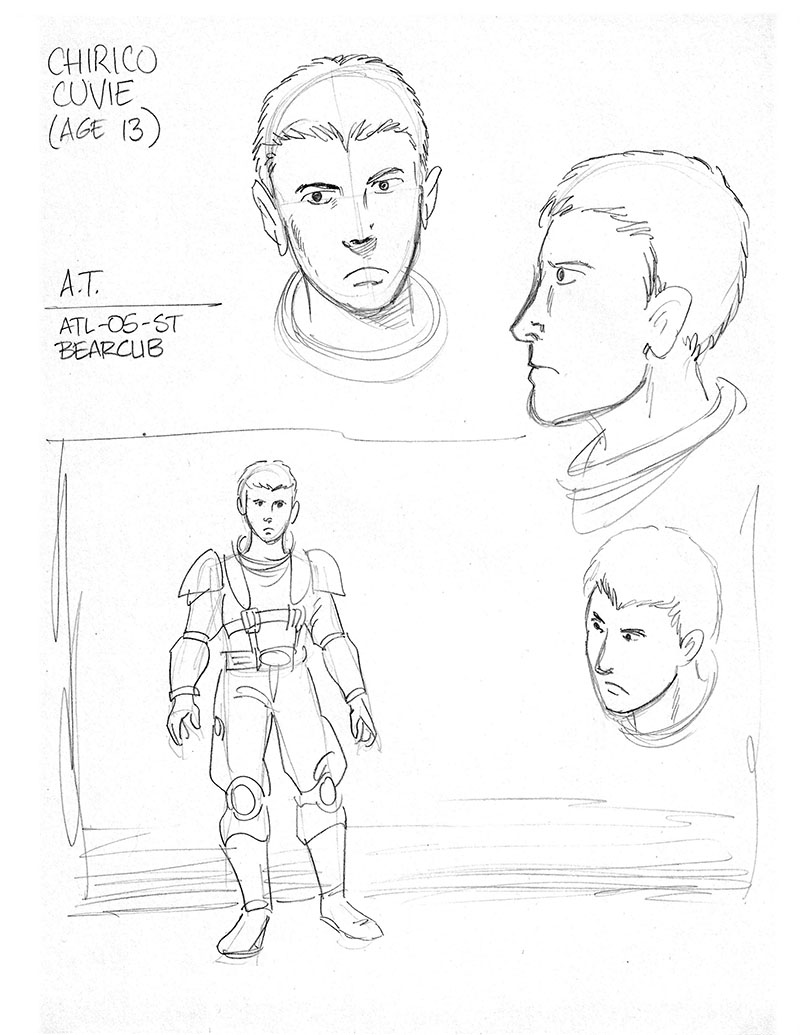 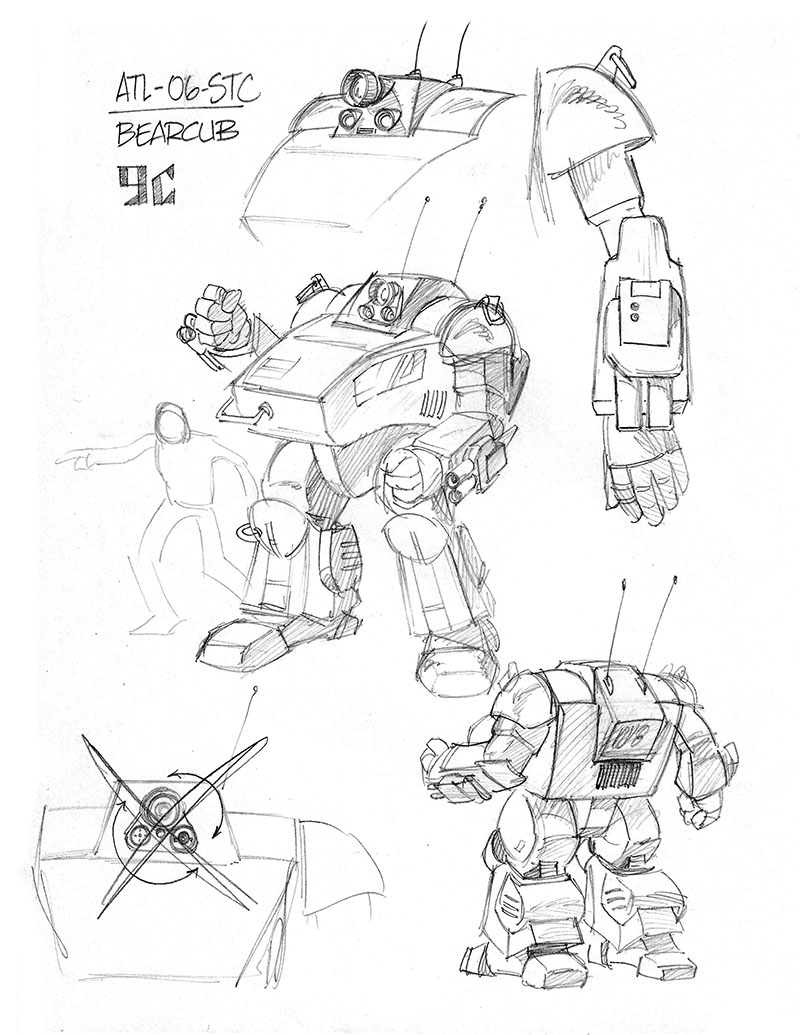 So how did THAT come about?

If you tracked all my BROID articles, you read the sorry tale of how my first creator-owned comic series ran into rough ground in early 1990 when advance orders from stores came in lower than Malibu needed them to be. In order to keep BROID going after issue 4, I volunteered to take a pay cut. This left me with a hole in my income that needed to be filled with something else as soon as possible.

The leading question from Malibu was, “What else have you got?”

My answer was The Mission of Gold Shoulder. Advantage: I was sitting on close to 100 pages of material, already written and roughed. Disadvantage: neither of us had the license to publish an Armored Trooper Votoms comic. Therefore, it had to become something else. The solution was obvious: take every element that was tied to Votoms and untie it. Change the names and the mecha designs. The story was solid enough to survive without much alteration.

I’d never actually finished writing it in the Gold Shoulder phase. At the point where I put it on pause, I felt like it was about 60% of the way in, which would give me four issues. Two more would be enough to wrap it up, which meant six months of employment. I’d have to work harder than ever, since I’d be drawing Chaser Platoon, Lensman, and Broid Book 2 simultaneously (three comics a month). But I would certainly enjoy finishing the story after leaving it unresolved for several years. 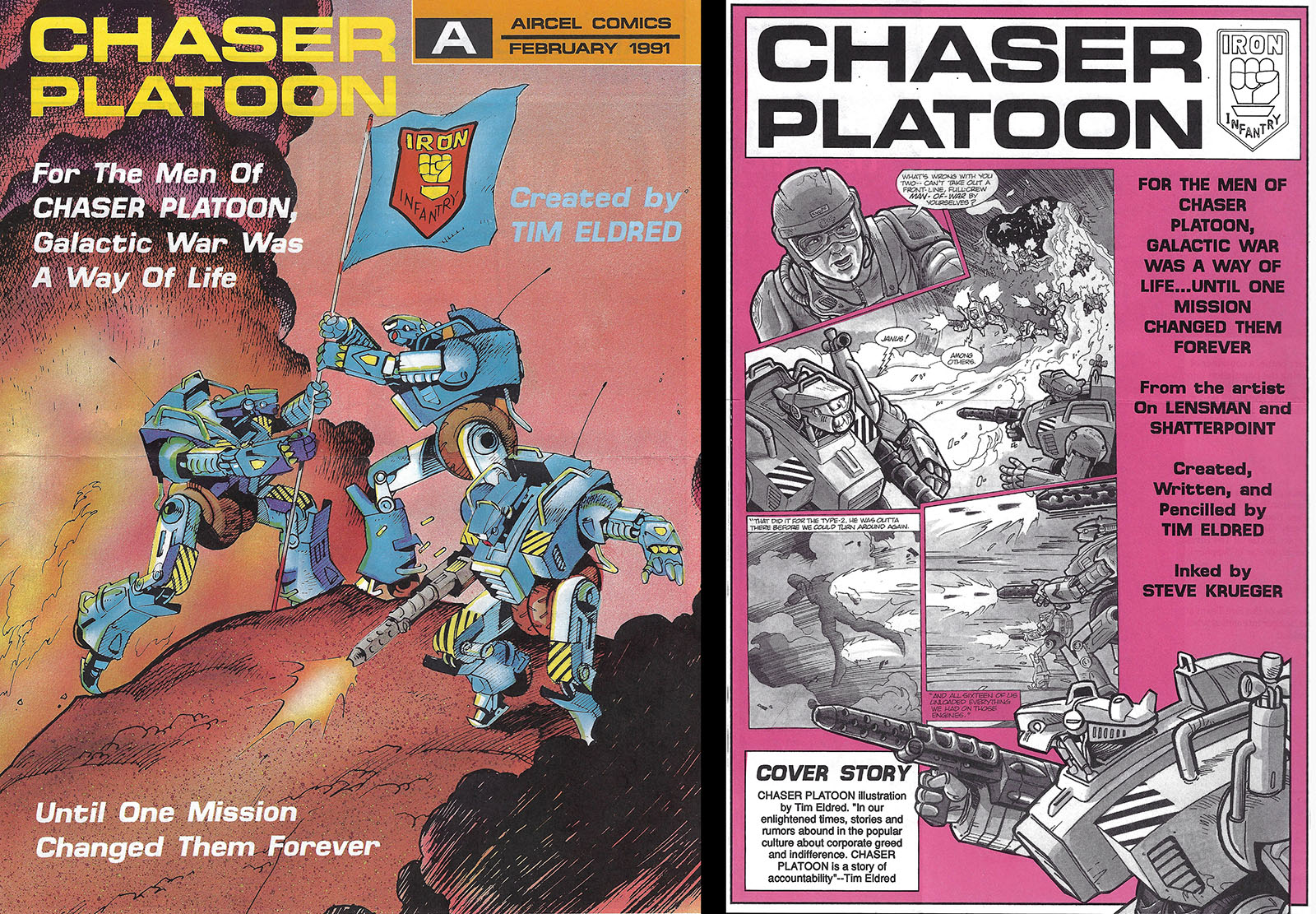 Chaser Platoon will be presented issue by issue with lots of support material. For now, here is The Mission of Gold Shoulder, exactly as I roughed it out in 1986. You’ll see a few added notes related to Chaser Platoon, but for all intents and purposes it is my first Armored Trooper Votoms comic. (My second – legit this time – appeared in 1997. But that’s another story.) 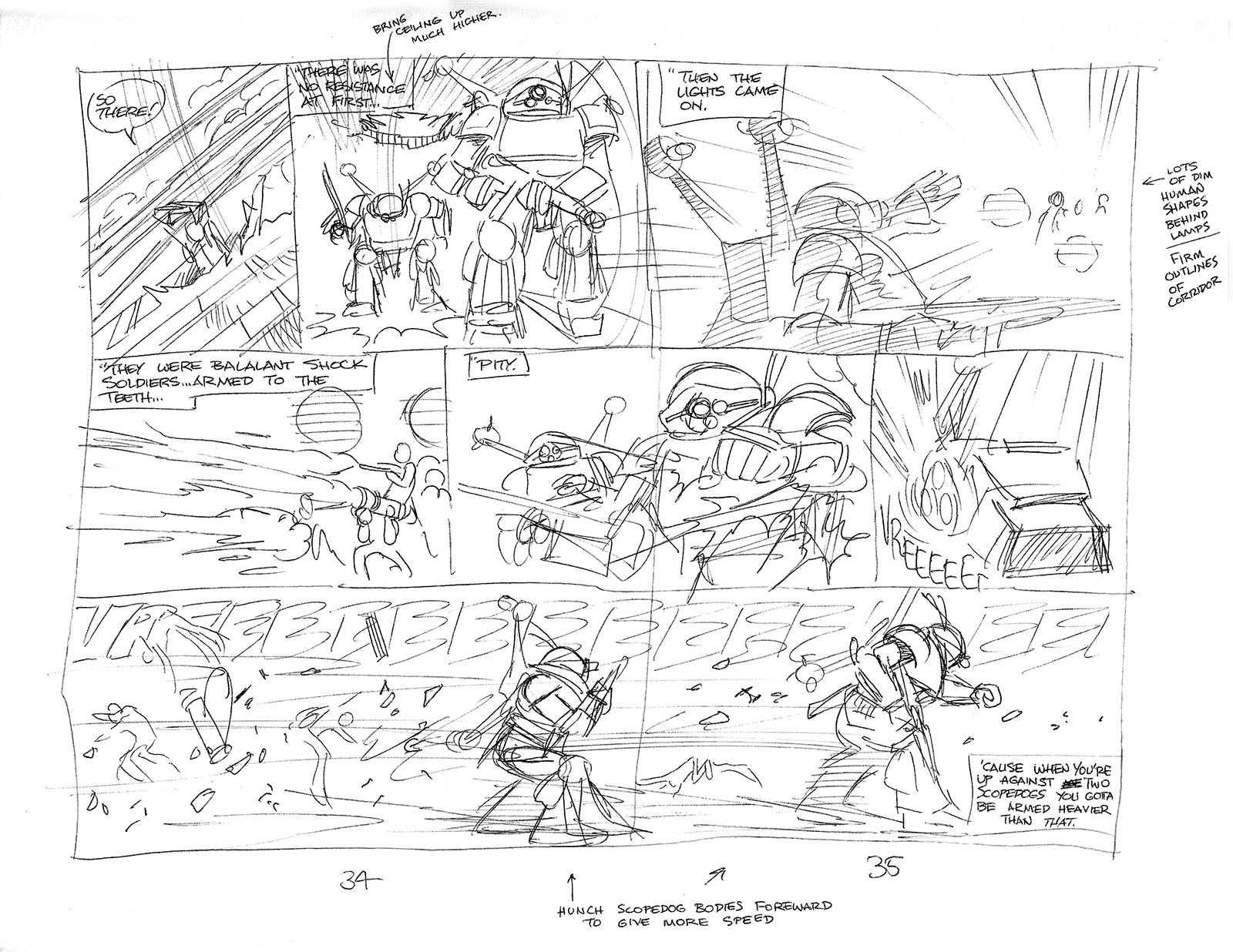 Click here to read The Mission of Gold Shoulder
This entry was posted in Pro Comics , What’s New