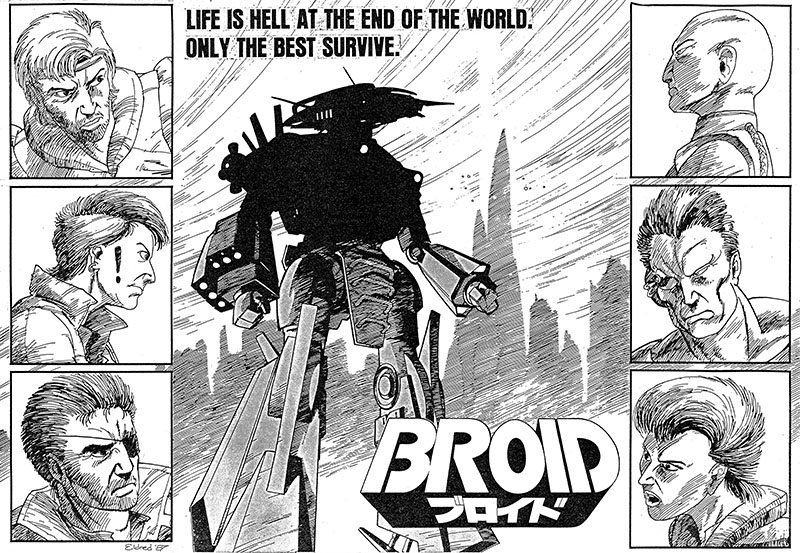 The year is 1987. Local boy, 22, has left his childhood home to begin a new life with the young lady who would become his first wife. He’s moved across the state of Michigan to close the distance with her. He’s been working as a graphic artist in print media for around four years, and he’s landed a new job at a print shop in the small town of Monroe, south of Detroit. He doesn’t know anyone there outside of work, and his girl is still in college. Any new chapter of life is an adventure, but so far this one mostly consists of solitude.

Fortunately, he’s used to this and he does with it what he’s always done: start thinking up stories. He’s me, so I guess I’ll drop the third person now.

By this time, the world of anime had swallowed me whole. Where I had once been obsessed with Star Wars, I was now obsessed with cartoons and comics from Japan, and the enormous mountain of merch that came with it. Living at home until I was 22 meant I had some real money to spend on it. (Not always a good thing; when I started watching anime, I went for a full year without writing or drawing anything. I later decided to call it an “absorption” period. Plus, any time you move, you suddenly have a LOT of cargo to carry.)

Now that I had to pay rent, I had no choice but to evolve from consumer to producer. With time on my hands, less money in my pocket, and anime in my head (specifically Fist of the North Star and SPT Layzner in those days), it was natural for me to create my own entertainment. One day at work, an image flashed into my mind, completely unlooked for: a giant, rusted robot rising from the ground and grappling with another, dust and smoke rising to choke everything in sight. Suddenly I had a new task: create a story that would allow me to render that image.

Over the next two years, I wrote and drew that story in rough form. I decided to get through all of it, let it be however long it wanted to be, and then walk up to a publisher at some comic book convention with a giant stack of material. “Here’s my series,” I’d say. “I’m ready to start drawing it for you.” It didn’t matter to me that they might want to guide it editorially. I knew everything. Hey, I was 22. 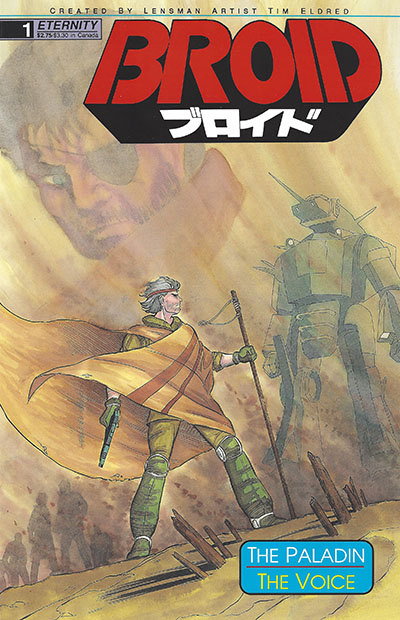 Like the initial image, the name BROID also came out of nowhere. It was meant to be short for Battle Droid, but that bit of trivia never came into play. As I developed the story, it became longer and more layered than anything I’d done before. Ideas would come to me and I’d write extensive notes. The ideas expanded and worked off each other, from broad strokes to granular moments. Character X does or says something. It leads to that result. Here’s a series of things that will build up to a major turn.

It was called “plotting,” and it changed everything. Figuring out how to build a foundation for a story was the lesson I was ready for, and it set the ground rules for everything that came after. So much plotting and design work accompanied BROID that I came to think of it as my Masters Thesis in making comics.

Jump forward to 1988. The whole thing is roughed out as a 13-issue limited series, dialogue and everything. I put together a pitch package with a summary and art samples. I shared it with an editor at Dark Horse (Randy Stradley). He didn’t pick it up, but he did give me my very first professional comic book job, writing and doing page layouts for a continuation of MECHA, one of the first “Amerimanga” comics. (More about MECHA in another post someday.)

Jump forward to again 1989. I’m at the Chicago Comic Con at the end of June, and my daughter is a month from being born. I’d really like to land a full-time comic book gig so I can be a work-at-home dad. I wander up to an editor at the Malibu Comics booth (Chris Ulm) and lay BROID on him. He’s never seen anything like it before. An artist shows up with an entire 13-issue series pre-written and roughed out? Amazing. He’s interested, but there’s another thing coming up first that they need an artist for, an adaptation of the Lensman anime. Then we’ll see if we can do something with BROID. Would I like to try out for it?

Holy hell, you bet I would.

Lensman became my first Malibu title under their Eternity Comics imprint (which also had Ninja High School, Robotech, and Captain Harlock). I officially got the job the week before my daughter was born. When I turned in the first issue faster than anyone expected, the word was given: BROID got the green light. This all happened within my first month of fatherhood, allowing me to quit my regular job. I was going to be a stay-at-home dad, making comic books full time, and one of them was going to be this original story that I’d been developing for two years.

Bigger and wilder things have happened since then, but at the time it was the biggest and wildest thing I could imagine. It changed everything. And so far, it hasn’t changed back.

The first issue of BROID was published in May 1990, a double-length debut with two chapters (so we could publish the series in an even 12 issues). The plan was to break it up into three mini-series, 4 issues apiece, to make it an easier sell. Not quite what I wanted, but I could live with it. When I received my first copy, it was like I became a father of two. I opened it…and my heart stopped. Everything was there, but the printing quality…to put it mildly…SUCKED. It looked like someone put a photocopier at its darkest setting and walked away as it pumped out pages. A huge amount of detail was just mashed into black. 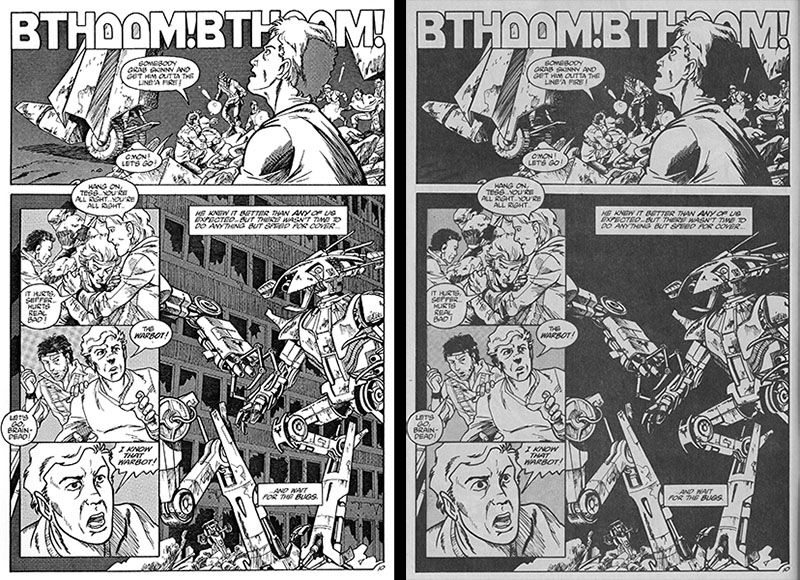 It was the first moment in what would be a downward turn in my fortunes, ultimately ending in premature cancellation. But we’ll get to that (and rectify it) later on. For now, I’m very happy to finally have the chance to show you what the first issue was supposed to look like, thanks to my file-preserving super powers.

Presented here is the complete first issue from cover to cover. Every finished page is accompanied by its corresponding rough and pencilled version. I recognize that this is a lot to swallow, but it represents a ton of sweat and blood and hope that finally paid off. I’ll have more to say about the series as it unfolds here issue by issue. And we’re going all the way to the end, which Eternity Comics most definitely did not. 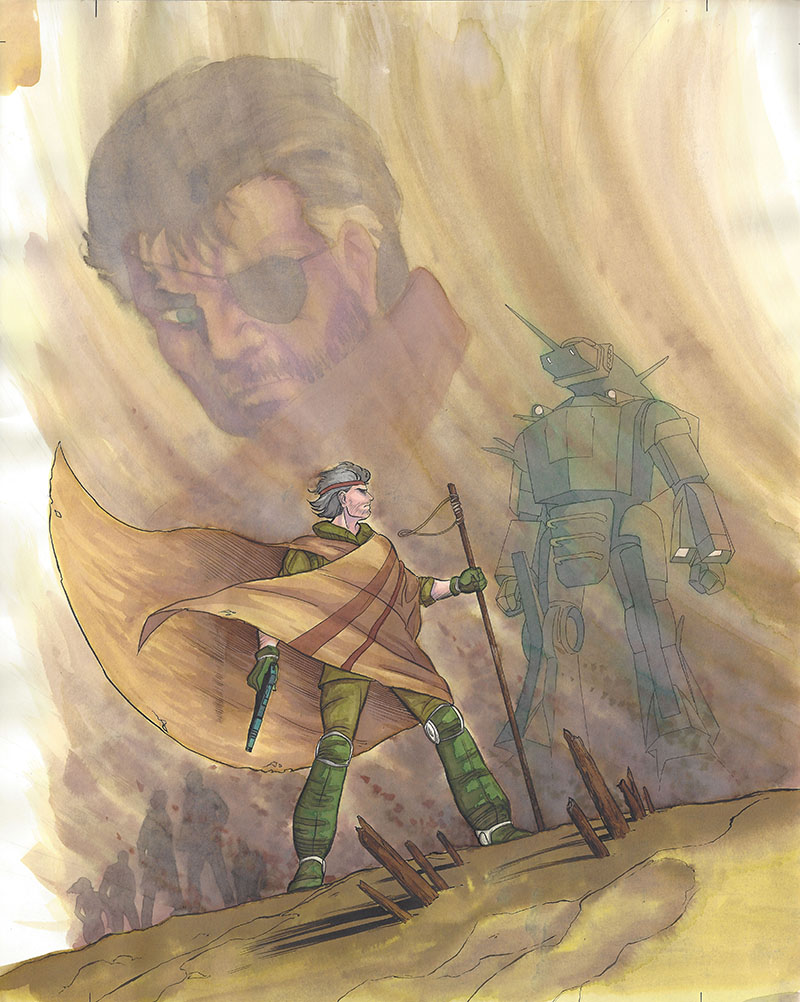 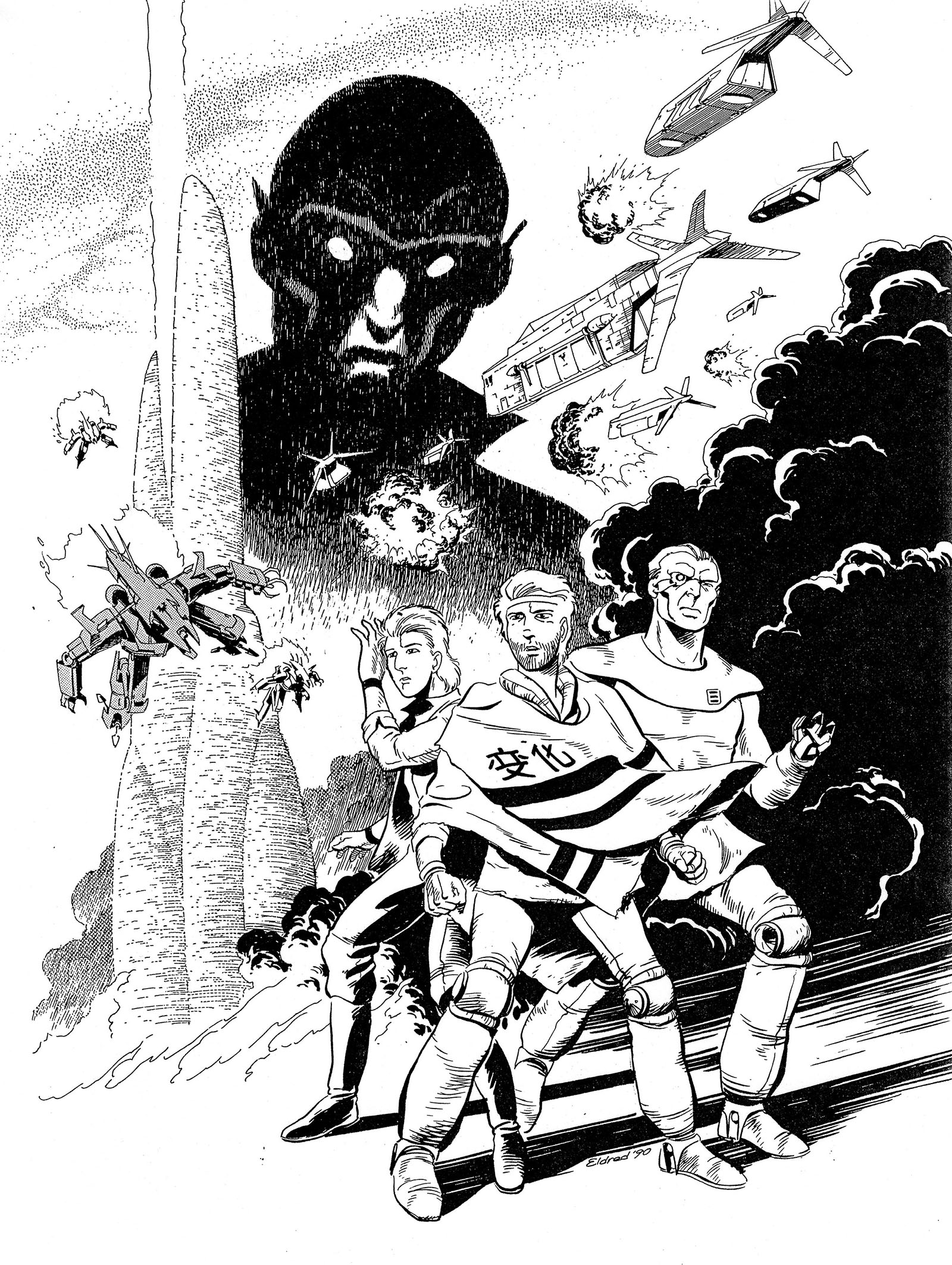 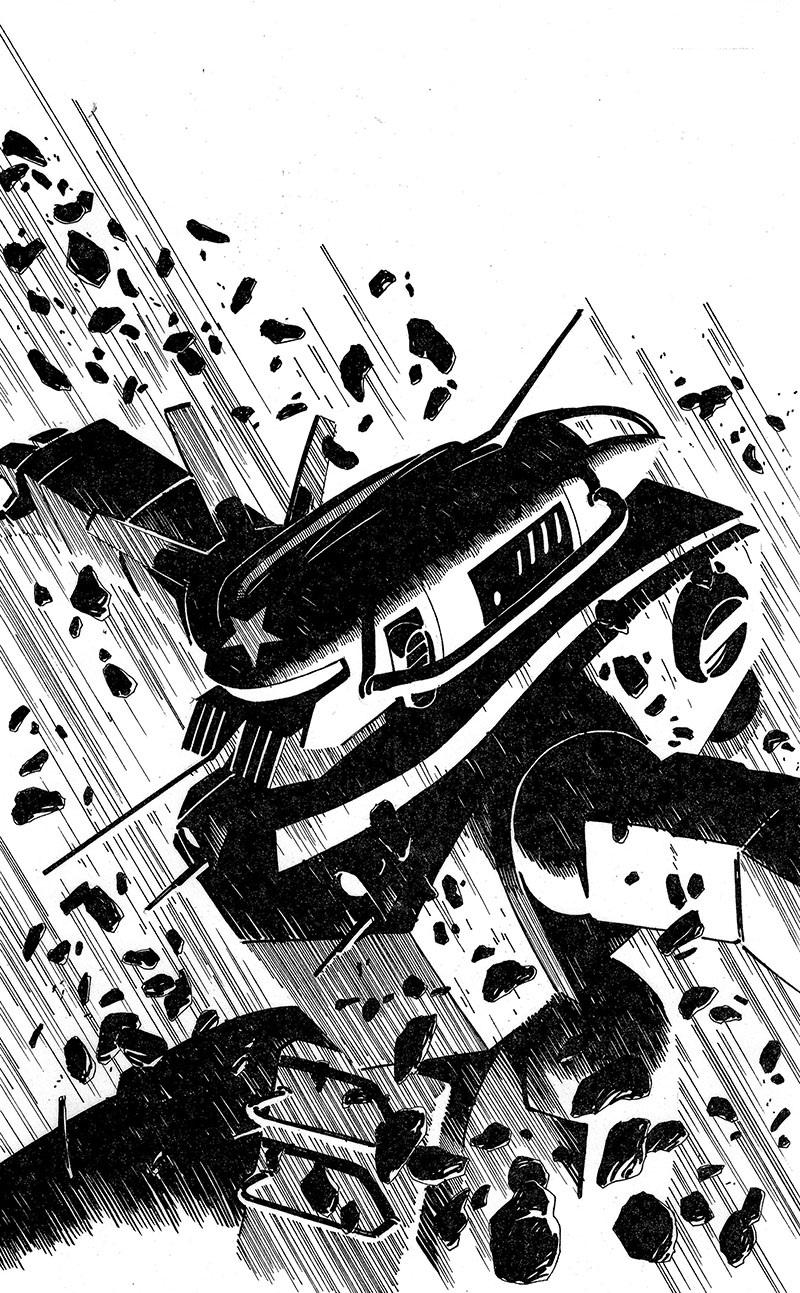 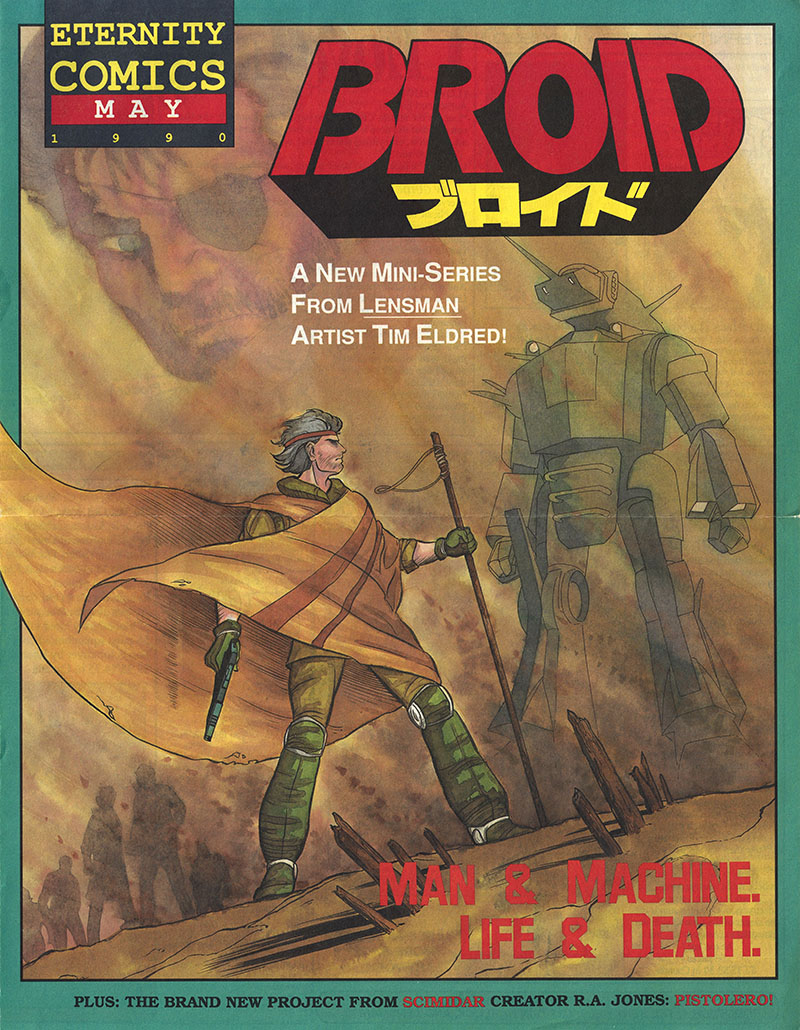 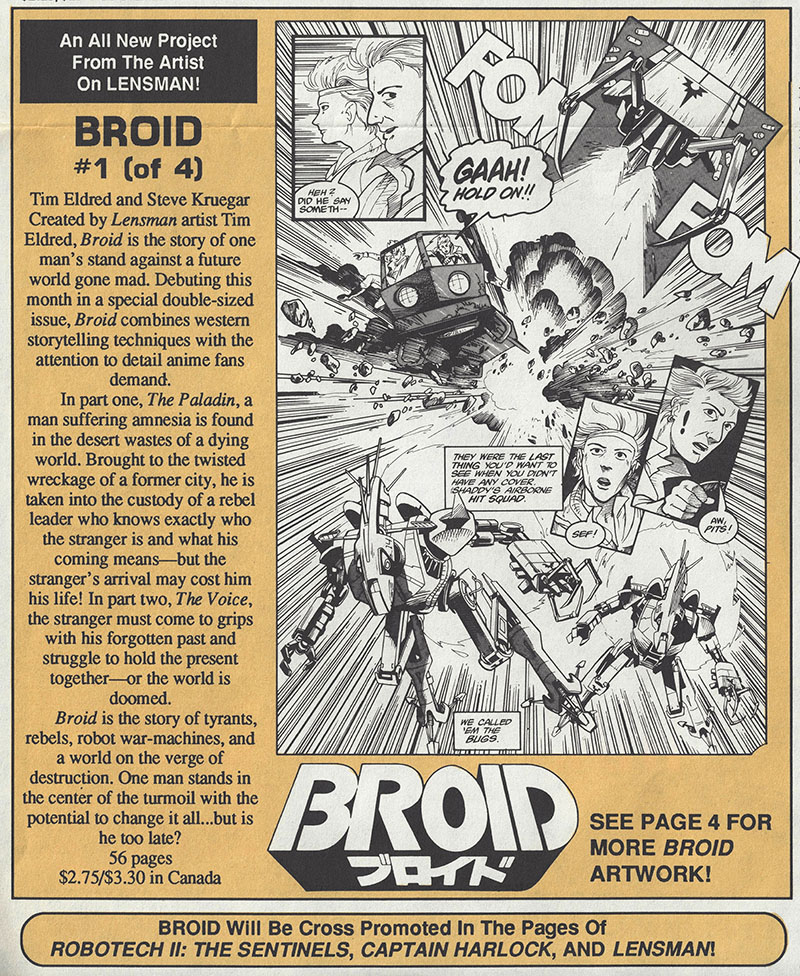