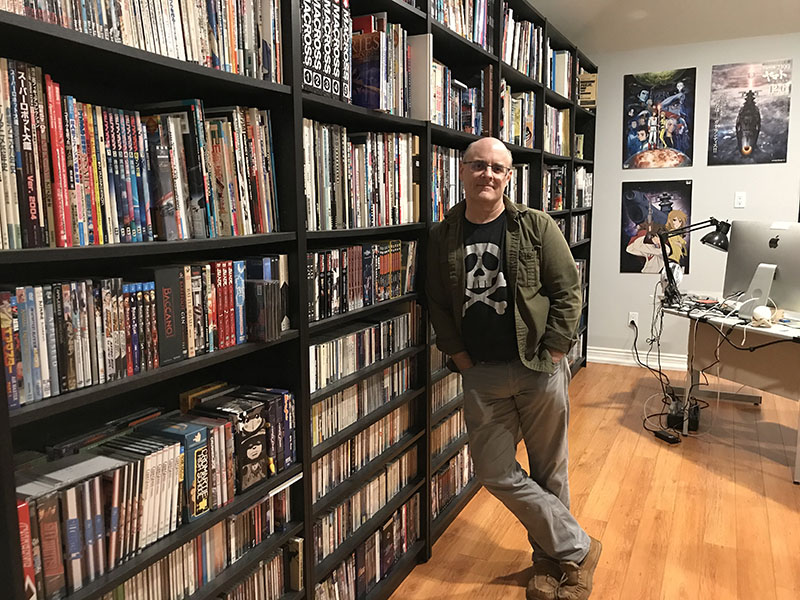 Thanks for clicking to find the answer to that question. I’m Tim, and for as long as I can remember, I’ve been a maker of things.

I’ve been drawing ever since I noticed that certain tools could make marks on stuff. My mom used to describe how hyper-focused I was as a little kid, and that she wouldn’t hear a peep out of me for hours on end. Worried that this was abnormal, she asked my pediatrician if she should do something about it. He looked her in the eye and said words that set the course of my life.

She followed his prescription, and allowed me to go on being a maker of things. Thanks, doc! I dedicate this website to you.

I grew up in the lovely state of Michigan, very far from the creative centers of the world, but the stuff I needed to see still found its way to my eyeballs. Newspaper strips, comic books, TV cartoons, SF novels and movies and TV shows, and all the attending merch.

The ones that really hooked me, the ones that showed me what I should aim for, were Speed Racer, Land of the Lost, 1970s Marvel comics, Space:1999, Star Wars, Star Blazers, 2000AD comics, and the massive world of anime. We’re all a product of what we love, and those things worked their way through my brain to my drawing hand to come out in various forms.

I couldn’t make movies, but I could certainly make my own books. I always had a drive to curate and organize information that appealed to me (dinosaurs, space missions, TV shows, comic strips etc.) and package it in some way. Few newspapers or magazines got by me intact. The scissors came out, clippings were grouped with similar clippings, and wound up in a stapled-together scrapbook. It’s no accident that I would later graduate into a print media career.

But what I loved most were comic books. From the first time I saw one, everything about them made sense to me. As a kid I made comics about my favorite stuff: Star Wars, The Shogun Warriors, Godzilla, Marvel characters, original stories, and more. No rules, no limits. There was no audience waiting for them, I just drew them for the sheer, unmatched pleasure of creating. When I discovered the world of SF fanzines as a teenager, I got to level up.

I hung onto almost that entire body of work and will be rolling it out – warts and all – in the Hey Kids Comics section.

I got my first break in the pro comics world in 1988 when I briefly worked for Dark Horse and then fell in big time with Malibu Comics. That resulted in a move to join their staff in Los Angeles (in 1992). Malibu is no more, but the move to LA made a whole new life possible. You can see my many published comics in the Pro Comics section.

Concurrent with my comic book career, I also landed a productive relationship with West End Games in 1991. This was back when they had the rights to publish Star Wars RPGs, and I actually got paid to play in my favorite galaxy. That led to assignments from other game companies and became a steady side hustle for the next five years. Everything from that period can be found in the Game Days section.

I made the transition from comics to TV cartoons in 1996 and have been there ever since. In that world, you bounce from one production to another and wear different hats. I’ve alternated between design, storyboards, and directing, and today it pays all the bills. If you’ve watched any action-oriented TV cartoons since 1996, chances are very good that you’ve seen something I did. I’ll be writing about those experiences show by show in the As Seen on TV section.

TIMDb should be self-explanatory: a complete index of all the stuff I’ve done. It makes even me dizzy when I look at it. I’ll be adding to it as I write about individual projects, and it will double as a site index for everything in ArtValt.

The Mystery Grab Bag section is a catchall for anything that doesn’t fit into the categories mentioned above. These are projects that came and went, some of which I completely forgot about afterward. I can always count on a surprise when I go digging through the storage boxes.

Speed Racer was my first anime and Star Blazers was the one that made me want to make TV cartoons for a living. Since then, countless other titles have found their way onto my long list of favorites. Watching anime, collecting the merch, and traveling to Japan are things I will never get enough of. The Anime World section is where I sort it all out for my fellow junkies.

That brings me to Cosmo DNA, the Star Blazers/Space Battleship Yamato Fandom Archive. I’ve been writing about my all-time favorite anime saga here since 2002. I’ve had the honor of meeting some of those who made it, and also creating Star Blazers comics, both on paper and online. This subject is so deep and vast I may never reach the end of it. Fortunately, many others have come along for the ride.

Grease Monkey and Pitsberg are what everything else leads up to. As much as I love all the other stuff, these projects are what I was born to create. Both are longform comic stories, both can be read entirely for free on their respective websites, and both represent the legacy I intend to leave behind. And you bet there’s more to come. 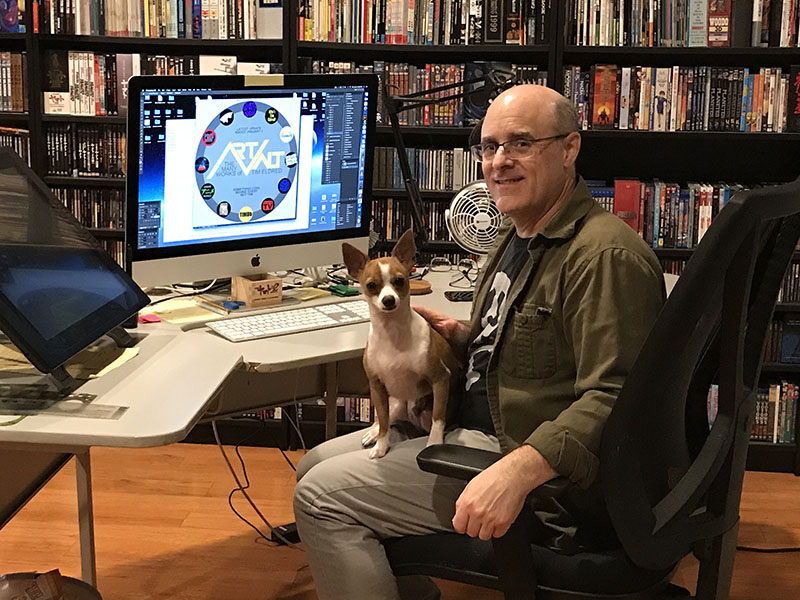 Paper is Dead to Me

Paper and I have had a complicated relationship. Paper broke my heart over and over again, no matter how many times I gave it a chance. So now we’re finally breaking up for good. It’s not me, paper. It’s you.

Here’s the deal: when you decide to publish something on paper, you’re instantly burdened with a chain of commerce. You don’t just pay for the paper. You pay for the ink, the printing, the binding, the storage, and the shipping. And when it lands in a store, they keep half of the profits. And that doesn’t even start to cover the cost of making whatever goes on that paper.

Therefore, whatever gets printed on that paper has to pay for itself several times over before you will see a dime. Every editorial choice is dictated by that chain. Otherwise worthy projects never get to the starting gate because of editorial anxiety. I shoved my way into the publishing world in 1989, and nothing has improved since then. Everything has gotten harder and more expensive.

What’s the solution? Take paper out of the equation. It’s amazing how liberating that can be. Once I got a taste of what I could do with online webcomics, I never wanted to deal with paper again.

And yet, I’m surrounded by books printed on paper. I buy new ones all the time. Go figure.

Find me on the socials:

Hear me yammer on podcasts

The Greatest Movie Ever podcast (April 2007)

The Greatest Movie Ever podcast (February 2017)

See and read me yammering in interviews 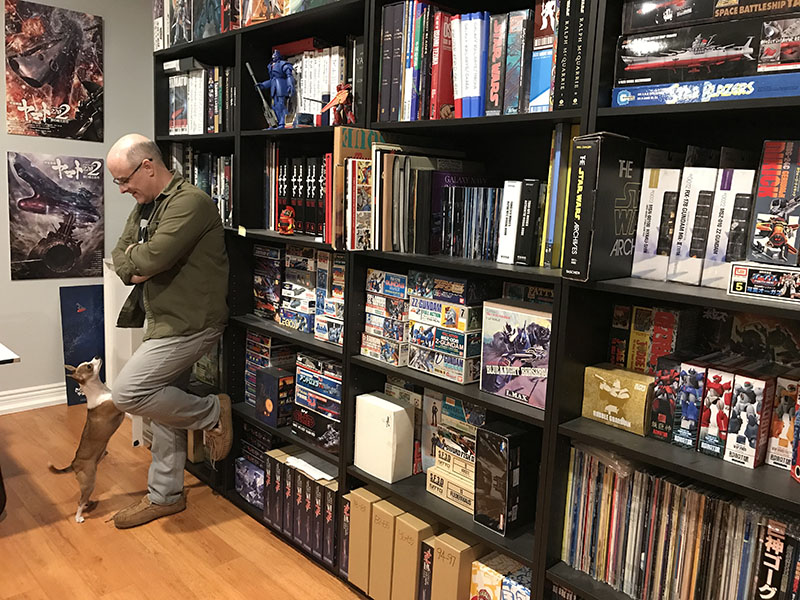 This entry was posted in Who’s Tim Eldred?