I have to report some mixed feelings about this one. I’ll start at the beginning.

There’s a very prolific artist named Christopher Hart who has made a career out of creating and publishing how-to-draw books. He’s done a LOT of them in many different categories. If you want to draw comics, for example, he has several books to help you get started. I have nothing but respect for any artist who makes it his life’s purpose to awaken creativity in other artists. Without people like that, many hopefuls would have a much harder time finding their path.

My mixed feelings come in whenever an American artist attempts to teach drawing techniques that originated with Japanese manga and anime. Many of us have been inspired and strongly influenced by them (I wouldn’t be who I am without them), but that’s quite different from having them in your DNA as a native Japanese artist, with full access to all the cultural heritage and nuance. Without that, you have no idea how much knowledge you’re missing. And therefore, setting yourself up as an instructor can become an exercise in superficiality at best, deception at worst. 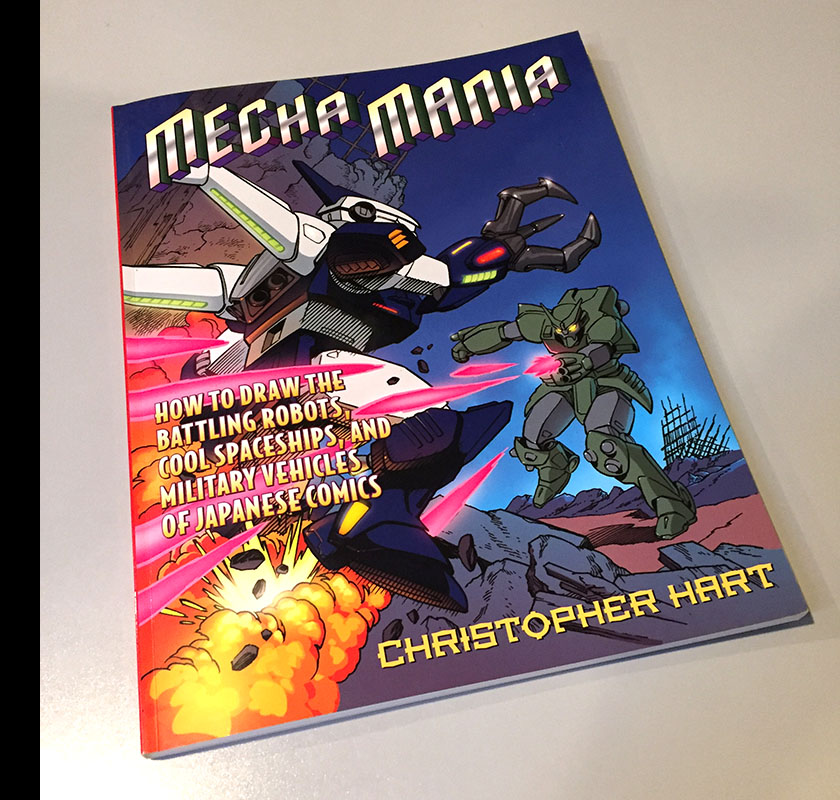 There’s also the broader issue of just how “teachable” drawing actually is. Without getting too in-the-weeds, my theory is that there are two elements: the part that comes naturally (art) and the part you learn (craft). I’ve long suspected that the “natural” part cannot be taught. It’s a spark that ignites all by itself and drives you to create. If you don’t have that spark, teaching alone will probably not ignite it.

Here’s the thing about the spark: it’s hungry. It wants to find a means of expression as early as possible. When it does, it will spin hard to make a groove. Once it settles in, that groove can become narrow and deep, making it hard to get back out. A good teacher knows how to counter this, broadening instruction to help you get unstuck. This is what makes how-to-draw books problematic for me; when the teaching becomes too narrow and specific, it limits you rather than liberating you.

When I was in the comic book biz, I put my time in behind the audition table at conventions, reviewing portfolios brought in by beginners. I probably learned more from that experience than any other, since it gave me the chance to dissect and analyze and discuss comics in ways I otherwise wouldn’t. I always tried to be engaging and encouraging, emphasizing what they were doing right, planting flags on obstacles, and giving them ideas for what to try next.

Something I saw a LOT was overt attempts to copy the styles of their favorite comic pros, to the point where they were sacrificing their own originality. In other words, sinking into a groove. I did what I could to lift them out, reminding them that they had all the freedom in the world to find their own voices. Limiting themselves to someone else’s style was willingly surrendering that freedom. (Occasionally, someone would come up to me at a later time and thank me for being so helpful, which was a perfect reward.)

One day in 2001, Christopher Hart contacted me out of the blue and invited me to contribute to his next project, a how-to-draw book on Japanese-style mecha design. I don’t remember how he found me, but he knew what I was capable of and wanted me to contribute. I was in a state of prolonged unemployment in 2001, so the timing was good. And mecha design is close to my heart, so I relished the chance to turn it into a learning opportunity.

My design knowledge came from a couple decades of study, examining what masters of the craft had done, building model kits based directly on their work, and assembling my own inventions for comics like Chaser Platoon. But even at my best, I could only echo the real thing. So I wanted to take a bare-bones approach, to help beginners develop their perception rather than just handing them specific examples and saying, “here, draw this.” That seemed like the responsible thing to do.

Christopher gave me a wish list of things to draw (samples of hands, feet, cockpits, etc.) and I expanded it from there, adding what I thought was needed to get someone in the right headspace; to think for themselves rather than just copy what I did. This all came together in the first chapter, titled Giant Robot Essentials. I contributed to other chapters, but this one ended up being all mine. It’s reproduced below with some very picky commentary.

Other chapters will follow, along with more thoughts about our responsibilities as teachers. 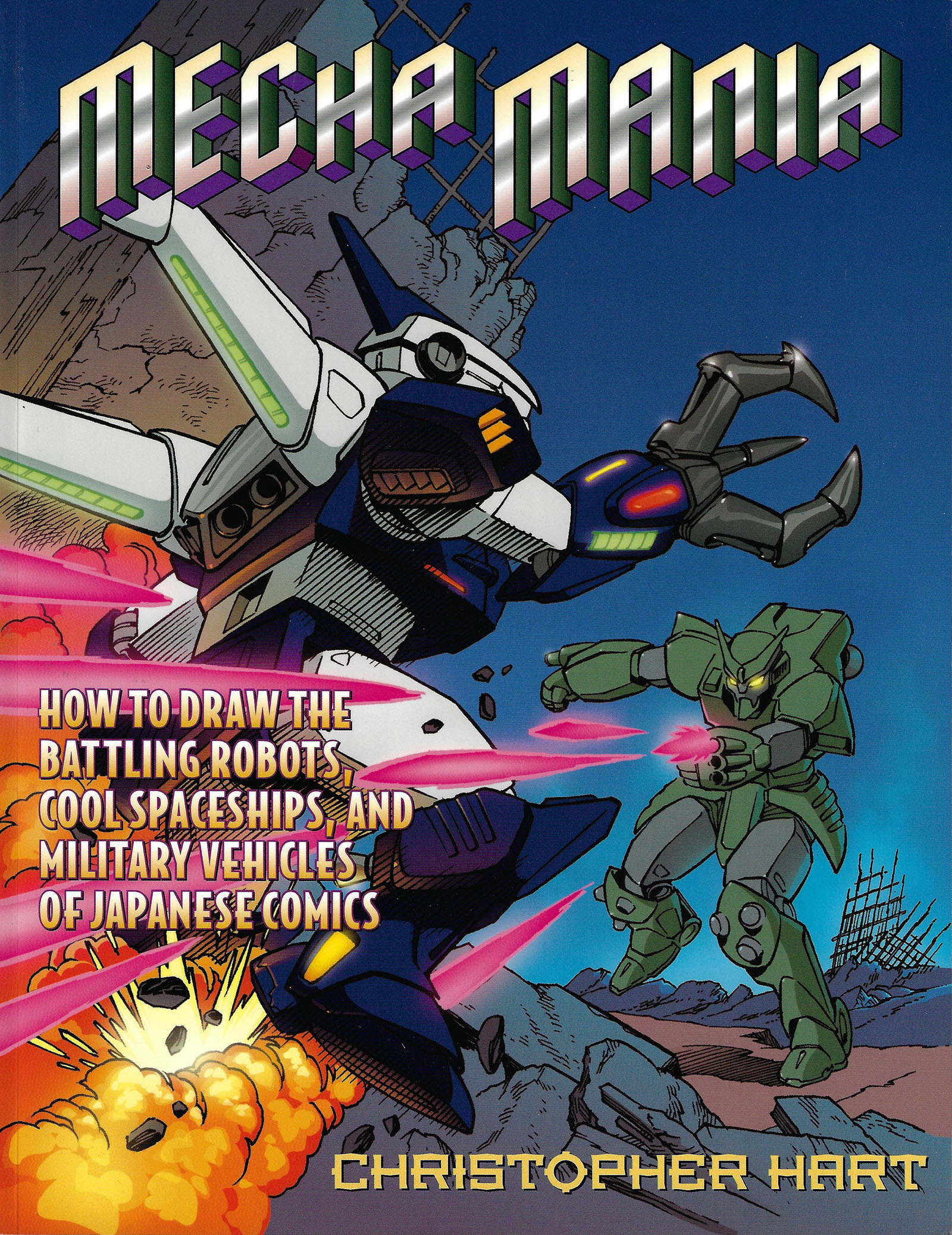 I was given the honor of drawing the cover art for the book. Someone else colored it, but I can’t tell who it was based on the interior credits. Great job, whoever you are!

Below is my original art. Or the first draft, anyway. Check out the crest on the background robot’s head. It was more complex in the first draft, and it made Chris nervous because he thought it looked too much like a Gundam. I tried to explain that there were dozens of variations on that crest throughout the history of mecha anime. In fact, they’re based on classic samurai helmets, which in turn were based on the big, scary mandibles of stag beetles. It was kinda troubling to me that a guy writing a book about mecha design lacked this very basic knowledge.

Anyway, I gave up trying to argue with him and simplified the crest on the finished draft. Unnecessary work irritates me like few other things.

Oh, I just noticed that my signature was deleted. That’s not cool. 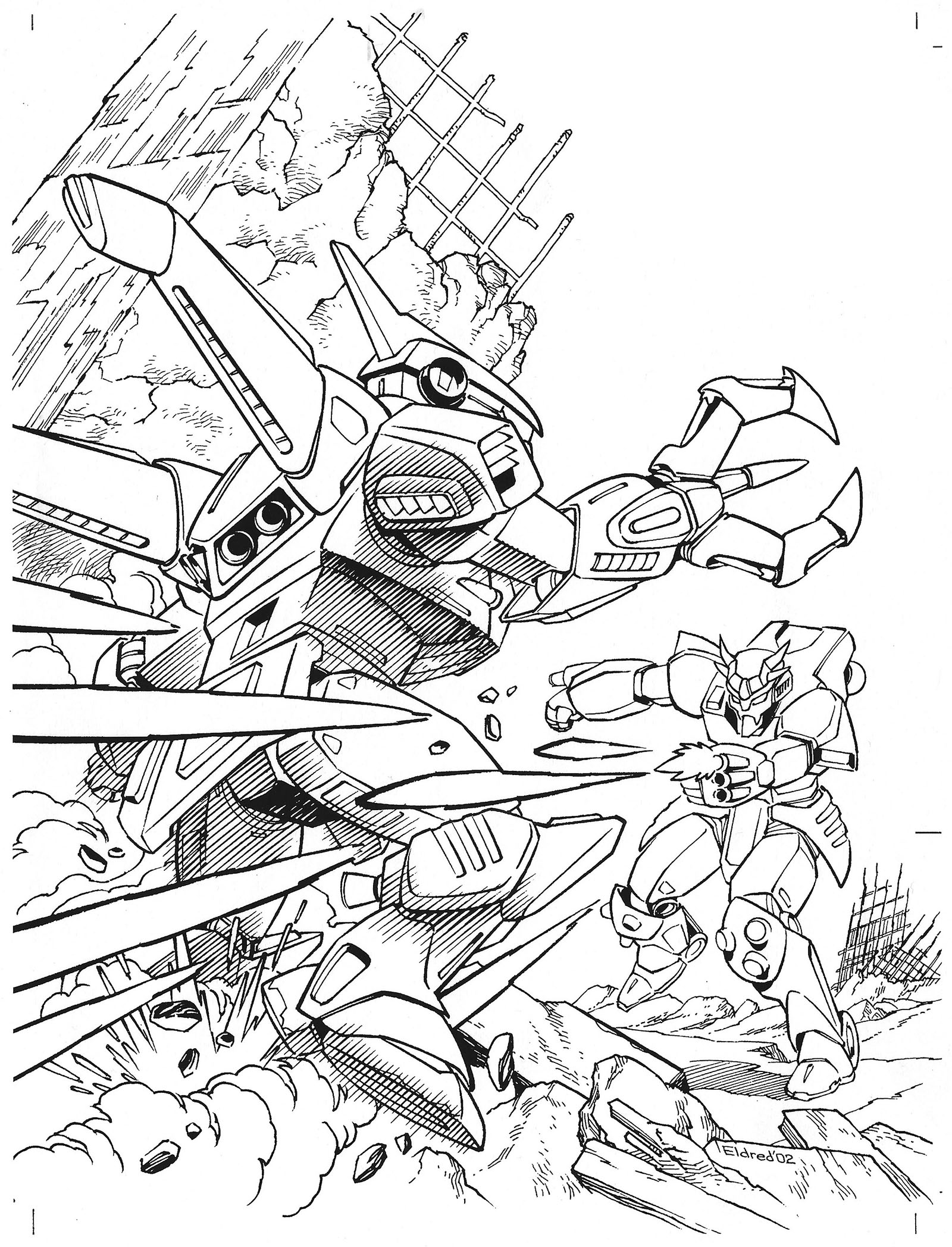 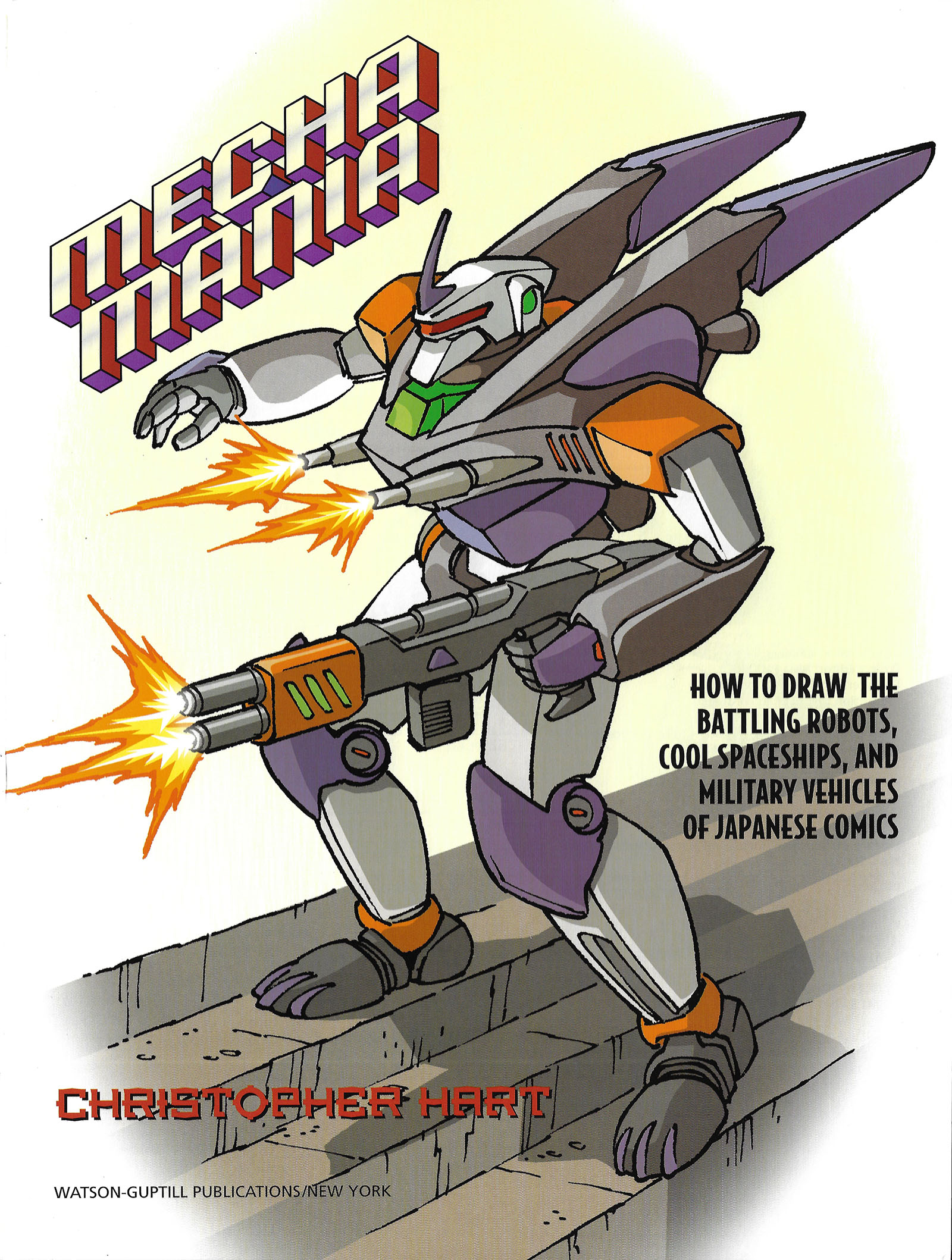 I also landed the title page for the book. This was a drawing I did for a later chapter, and Chris liked it enough to put it up front, I guess. Again, nice color work.

From here on, all the drawings are mine (except the color) and all the writing was by Chris. 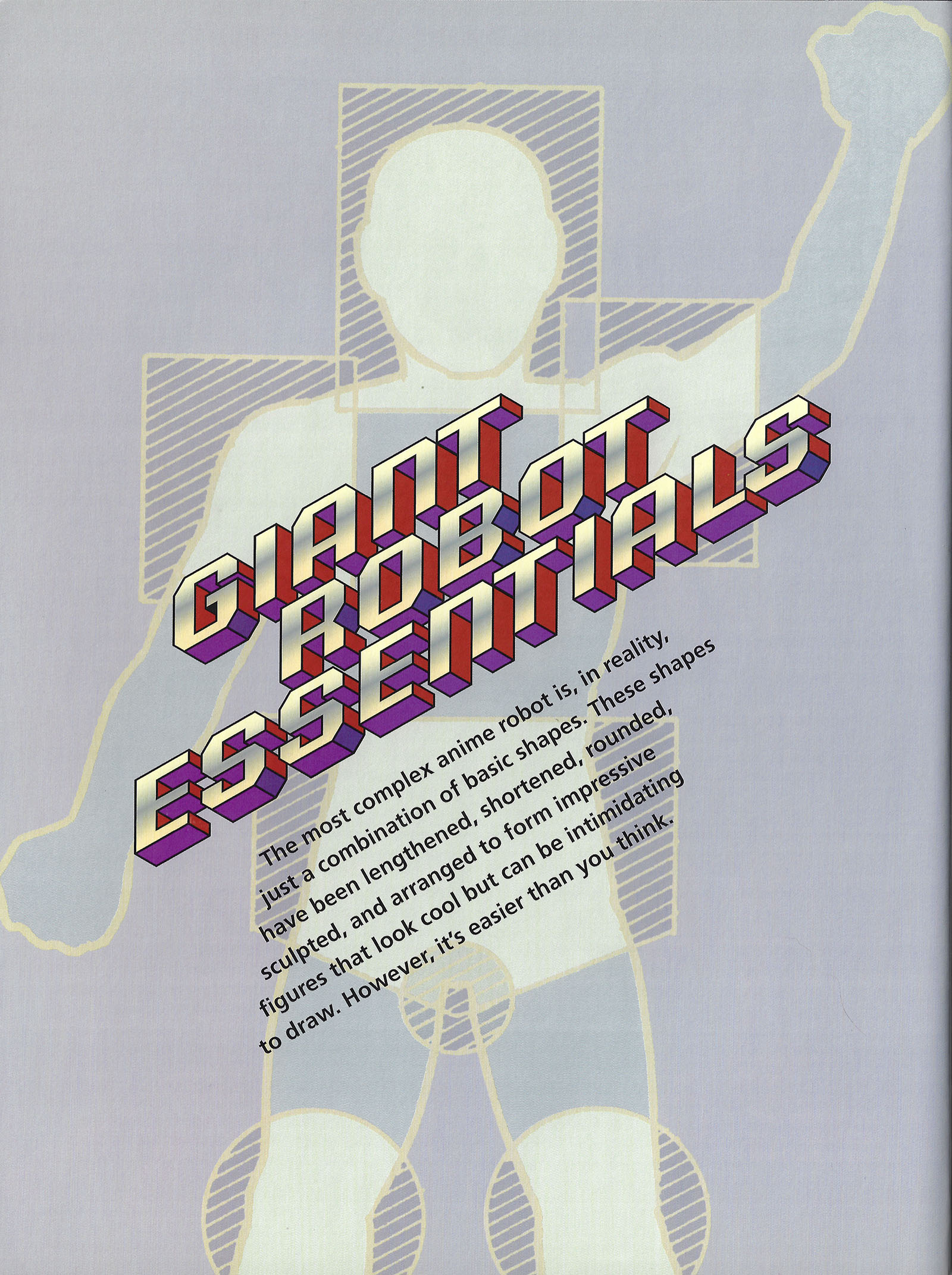 “It’s easier than you think.” No, it isn’t. At all. Ever. I would never have set up such a false expectation. It takes a LOT of hard work to get good at this very specific craft. Otherwise, everyone would be doing it. I’ve shown my work to comic book editors who told me even very experienced pros could not do what I was doing. I don’t say this to brag, but to underline that this craft IS NOT EASY. 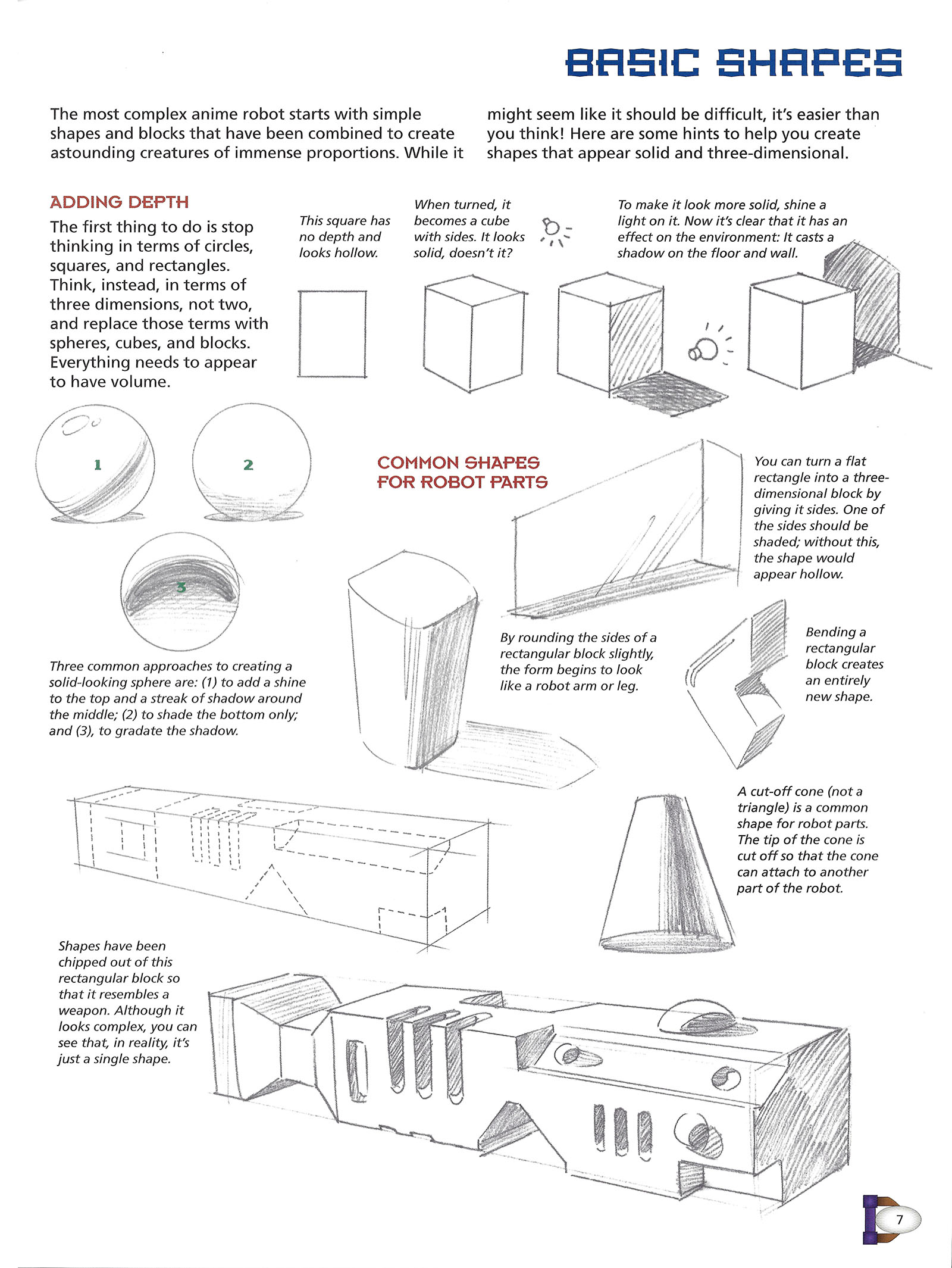 I’m pretty sure this page resulted from my suggestions. If I’d written the book, there would be a lot more pages like this. Nothing matters more than foundation. Without a foundation, your house will collapse every time. 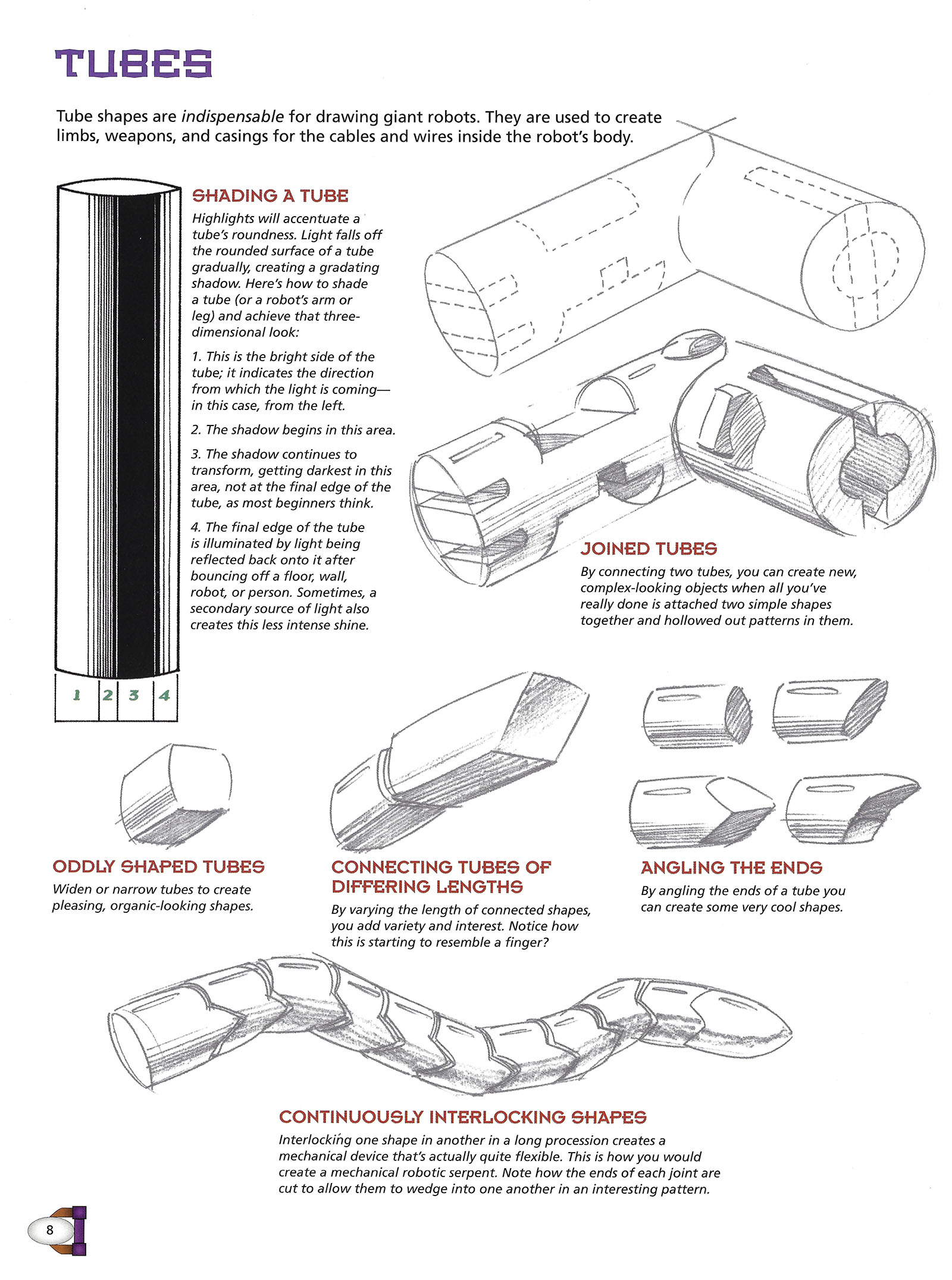 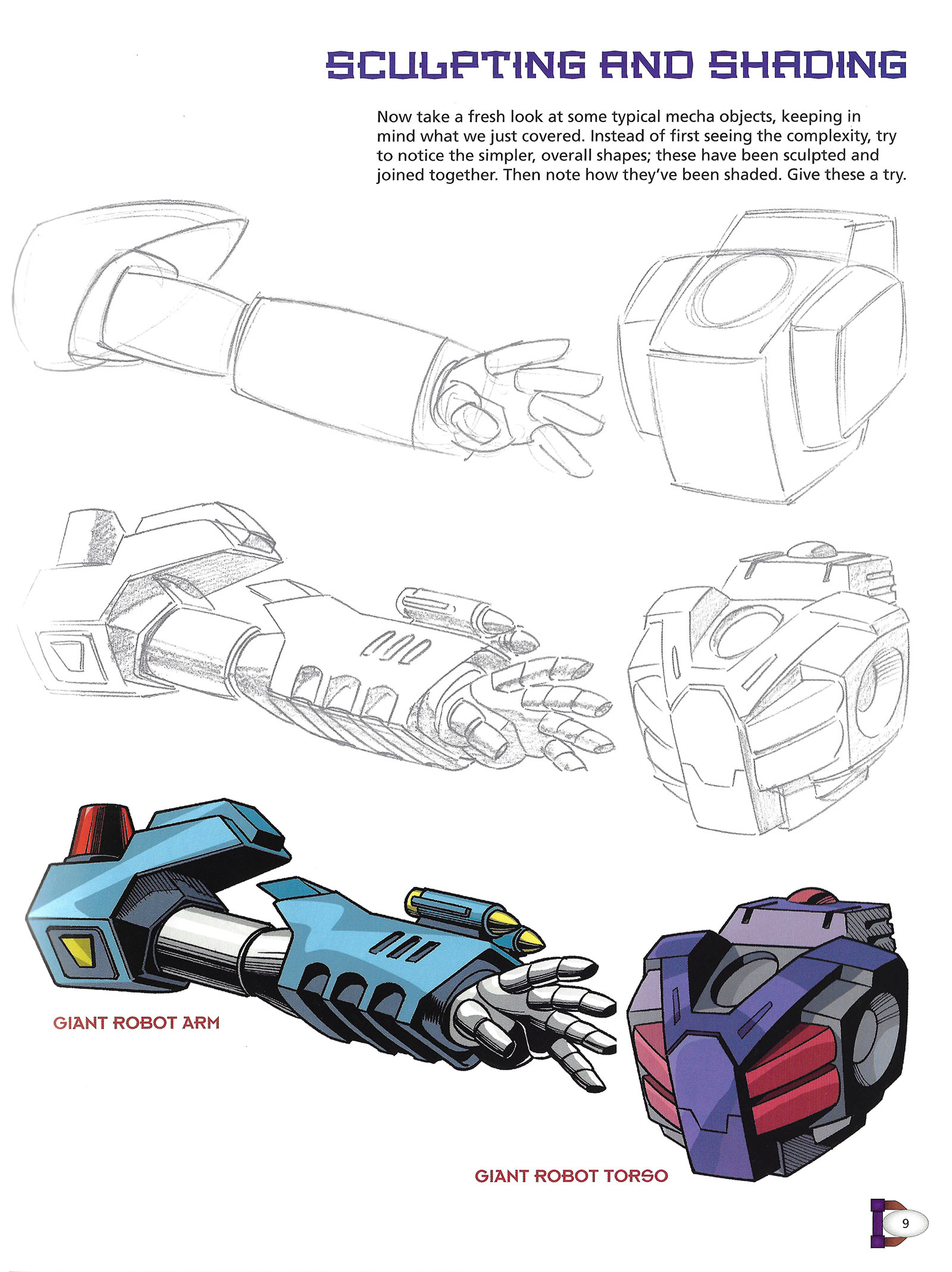 This lesson worked great until the color was added. Flashy highlights are a whole different subject that require you to know things about reflectivity, metals, light absorption, contours, etc. Should have stuck to flat colors here. 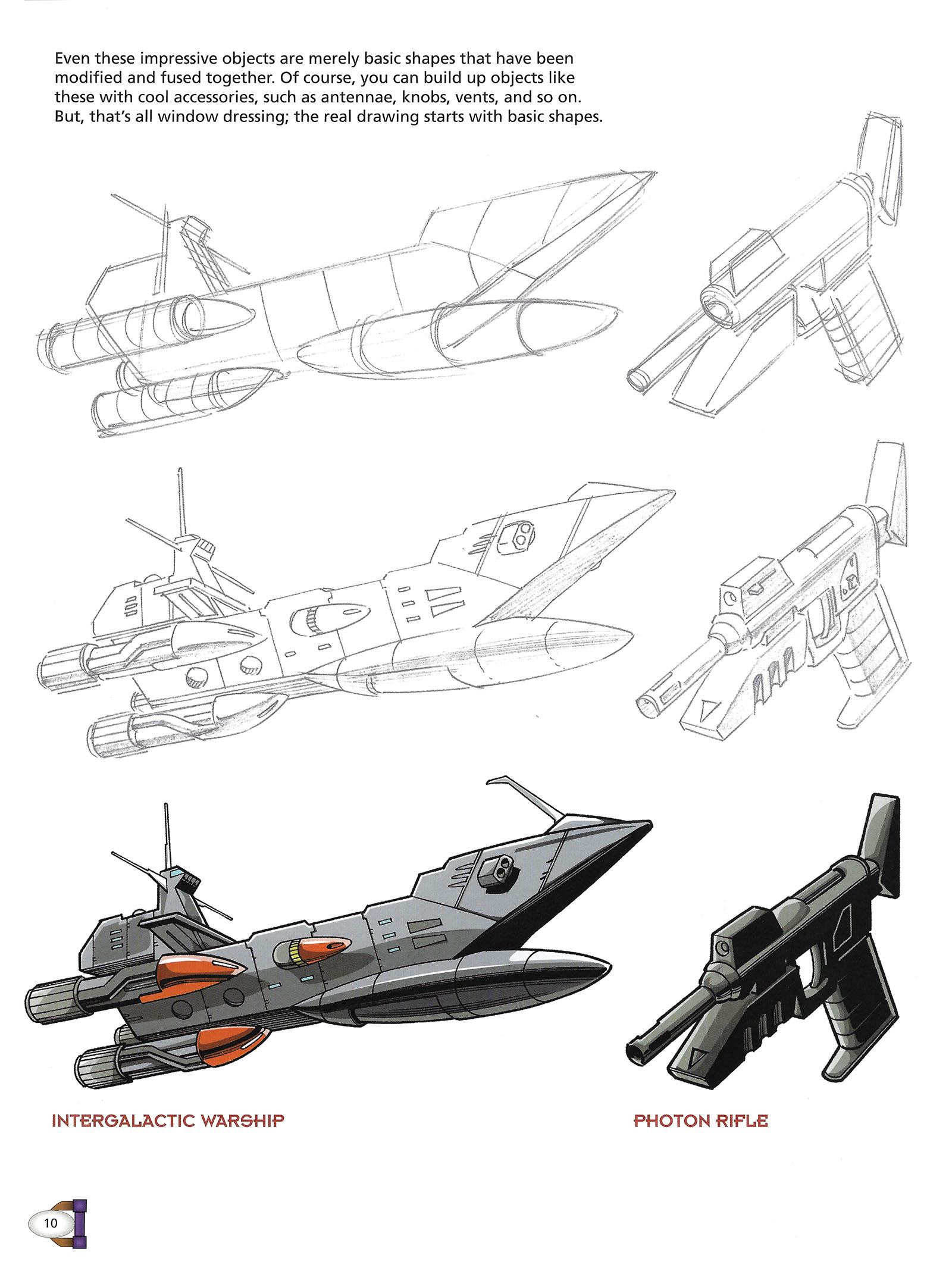 Minor quibble: a pistol and a rifle are two different things. This is a pistol. 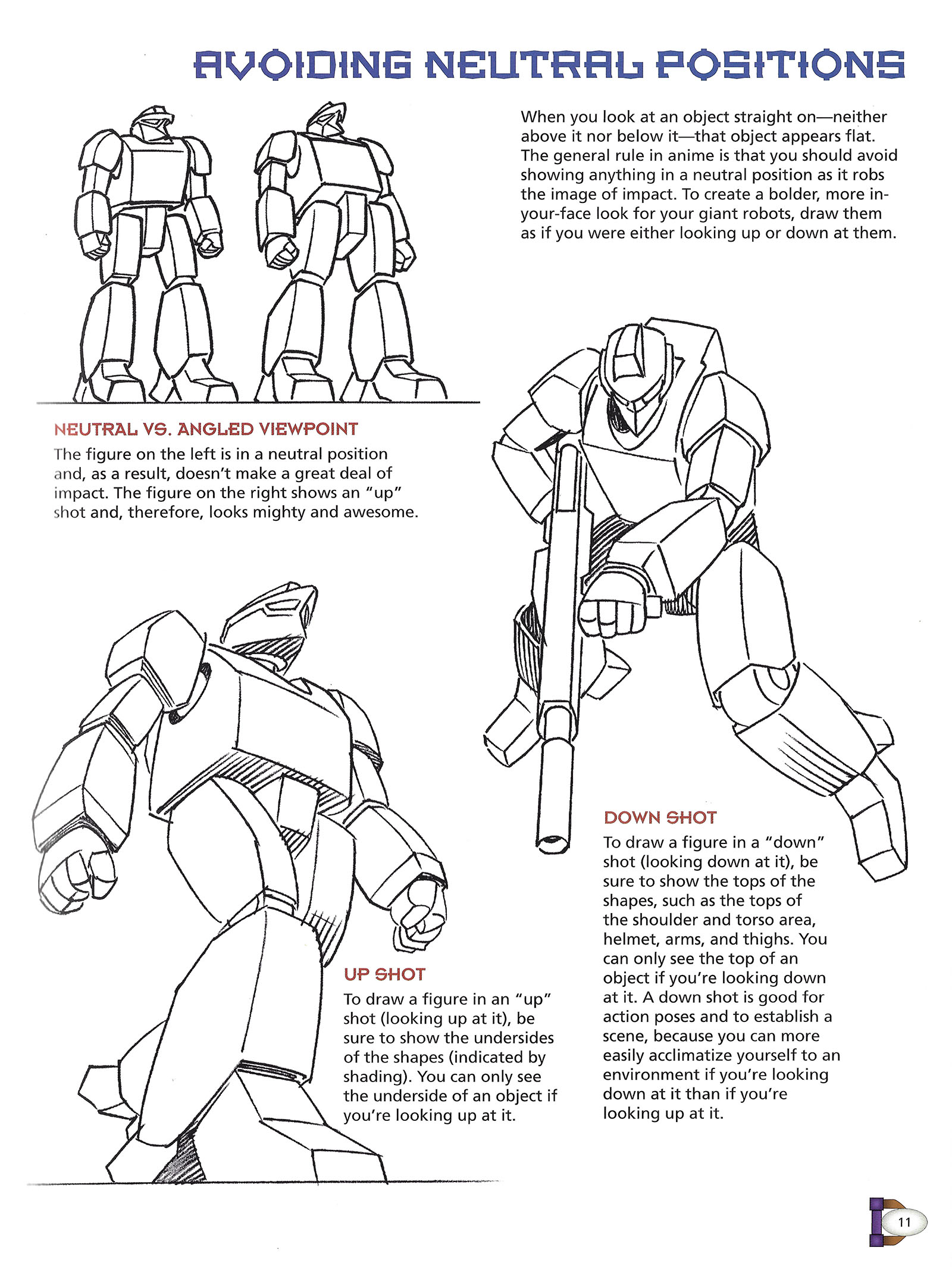 “The general rule in anime is that you should avoid showing anything in a neutral position as it robs the image of impact.”

Nope. There’s no such rule. Neutral and flat perspectives are used all the time when they serve a storytelling purpose.

I would have entirely deleted the last sentence in the paragraph about down shots, because it oversimplifies the concepts of perspective and scene-setting, which could fill entire chapters if not an entire book. Way more information than can be serviced here. 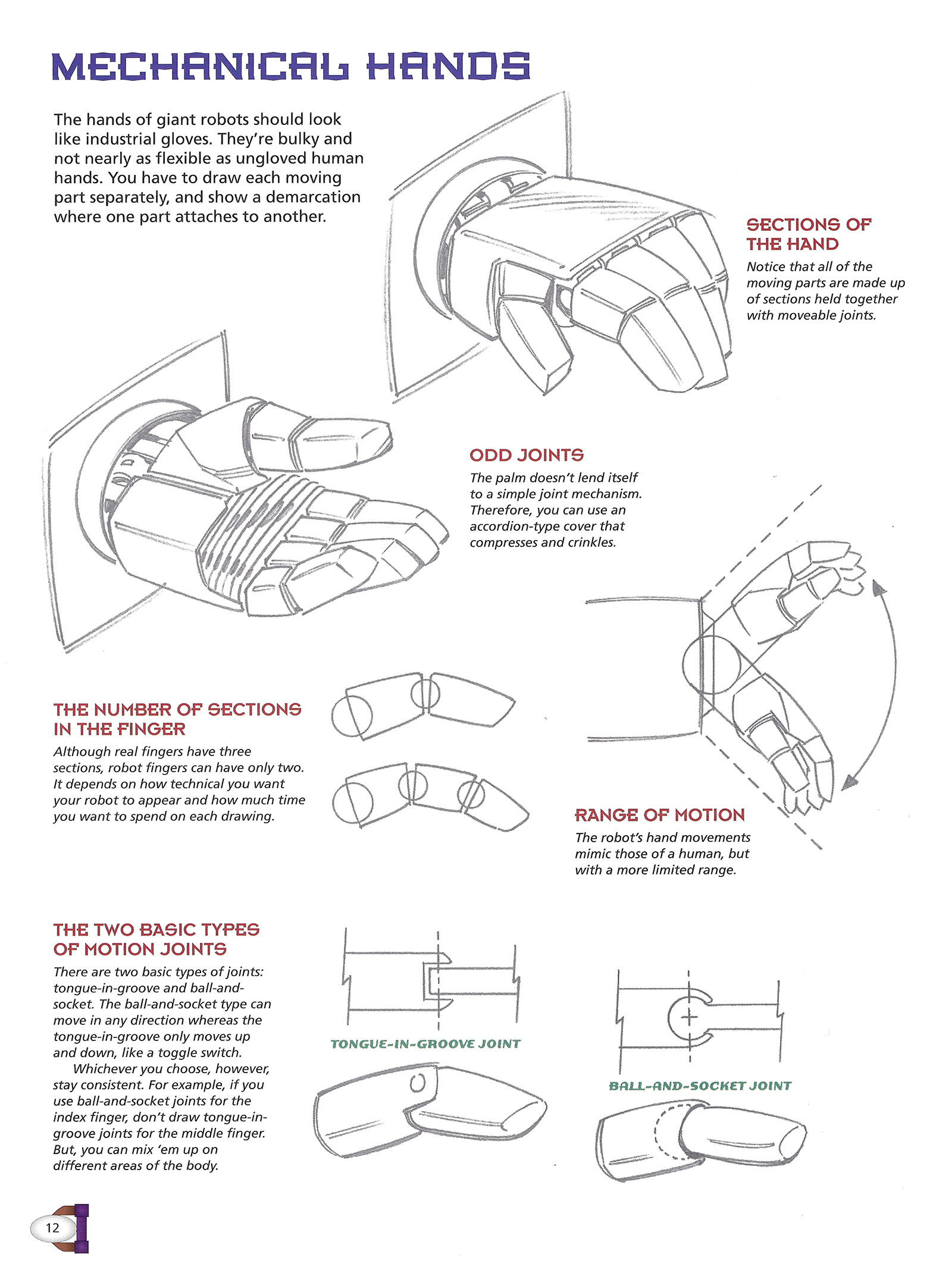 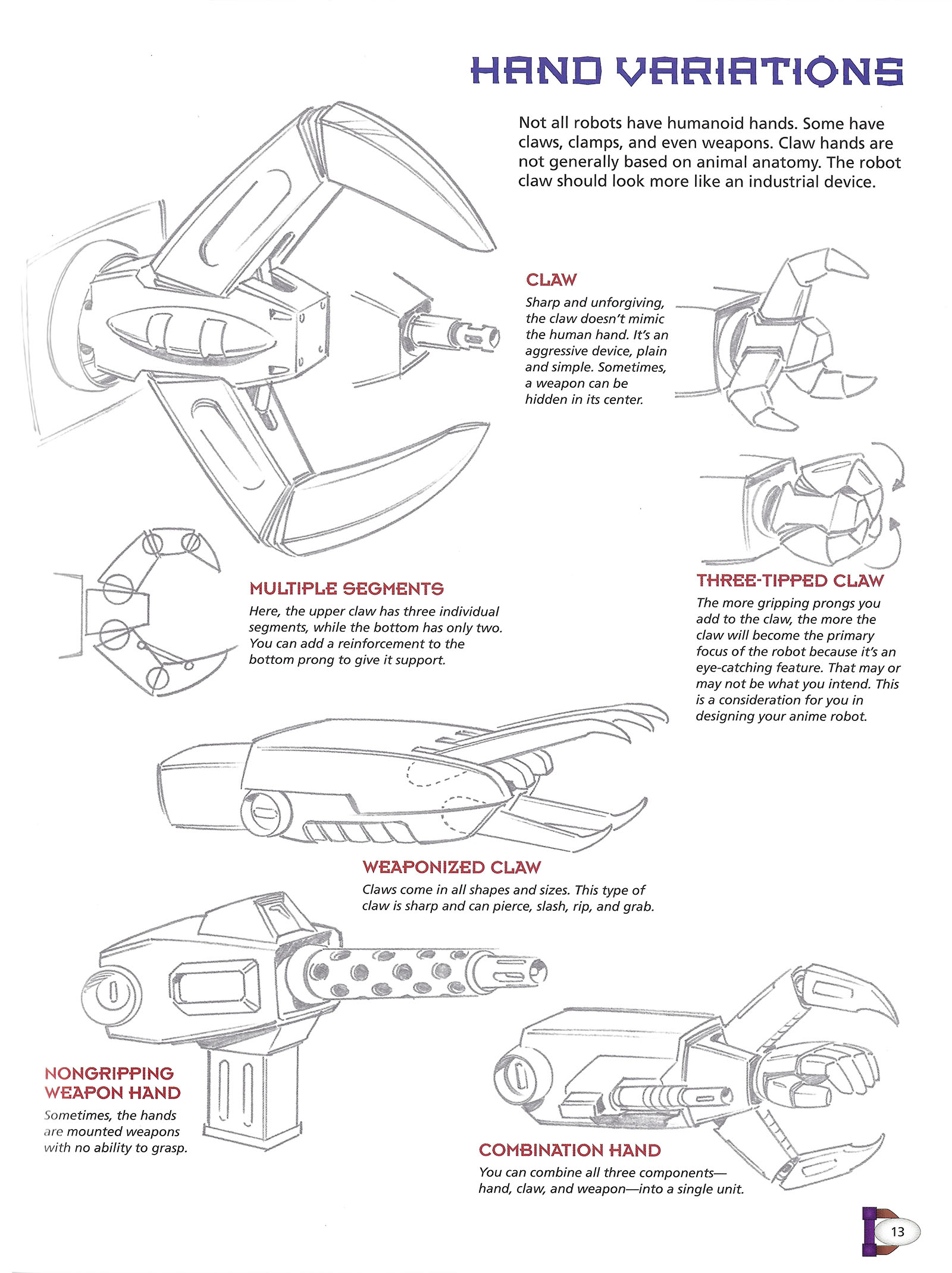 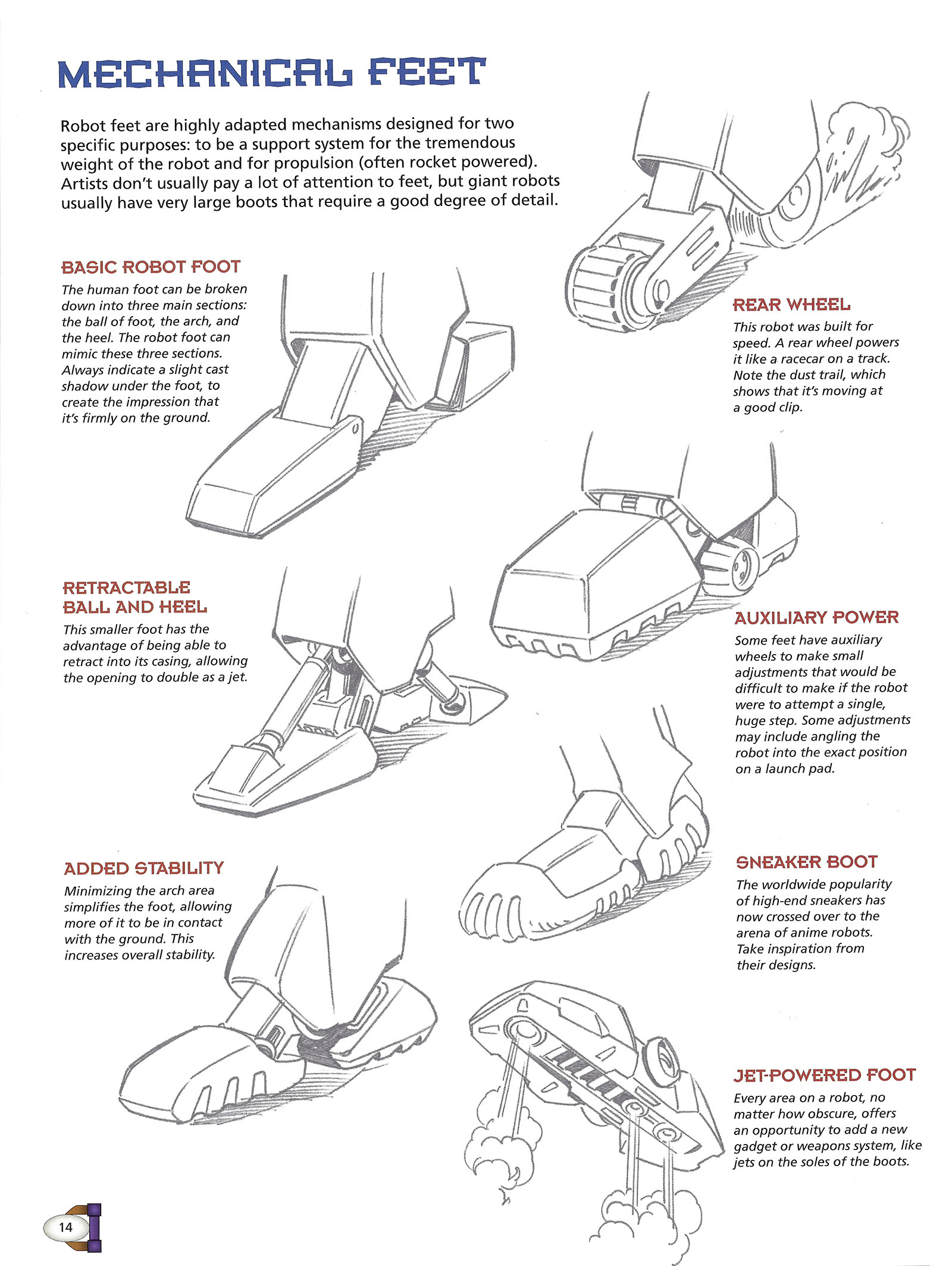 For this page, I delivered a variety of foot designs and Christopher tried to interpret them. I wish he’d given me a chance to review the text. The “retractable ball and heel” description, for example, has nothing to do with what I drew. That one was meant to be about exposed machine parts. 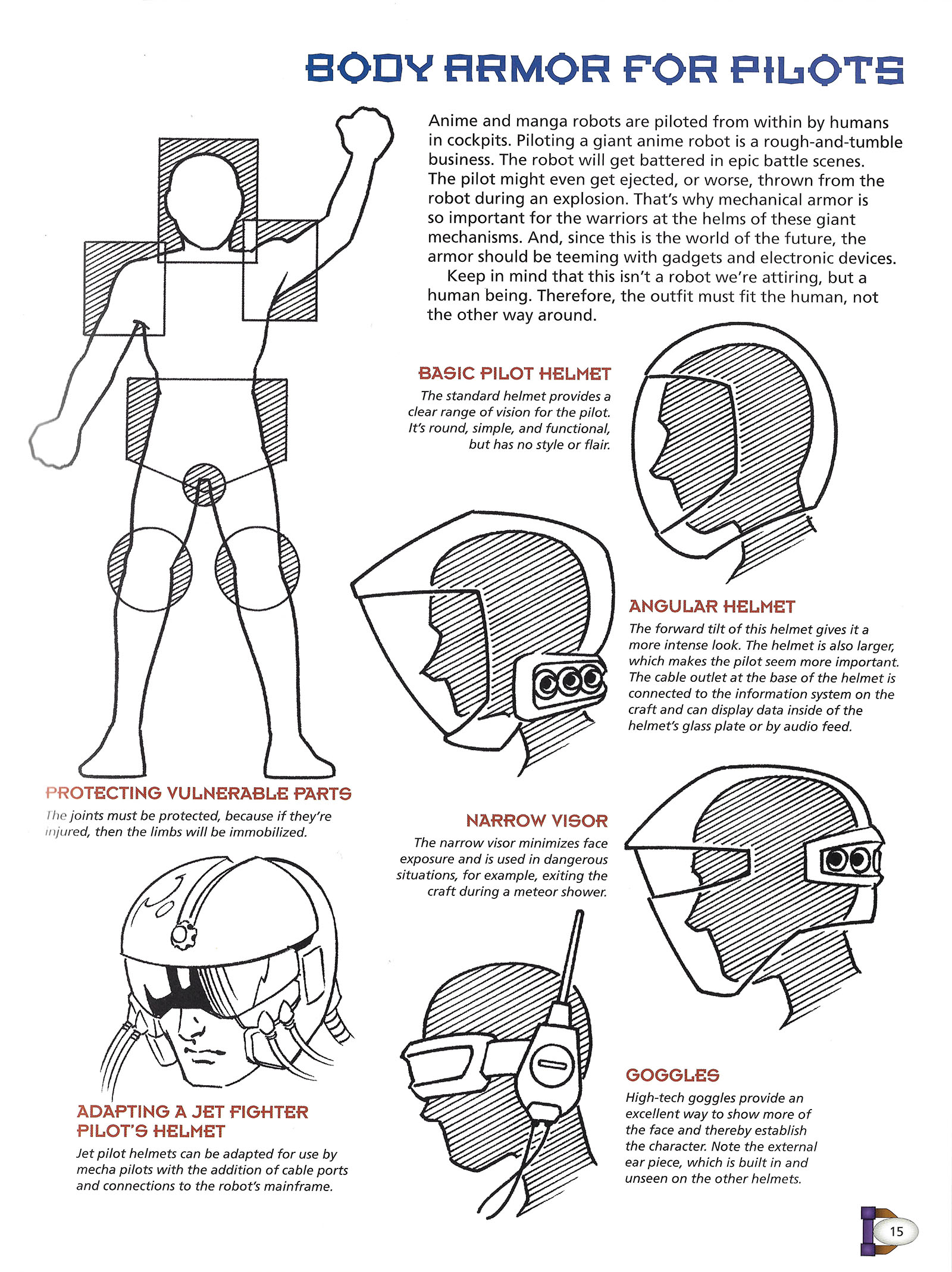 Here’s another page I would have rewritten. Lots of made-up gibberish that doesn’t have much to do with what I drew. The bit about “protecting vulnerable parts” is misguided. Since this section is about designing a pilot suit, I wanted to point out the areas of articulation to be careful about. I’m pretty sure I explained that when I sent in the art. 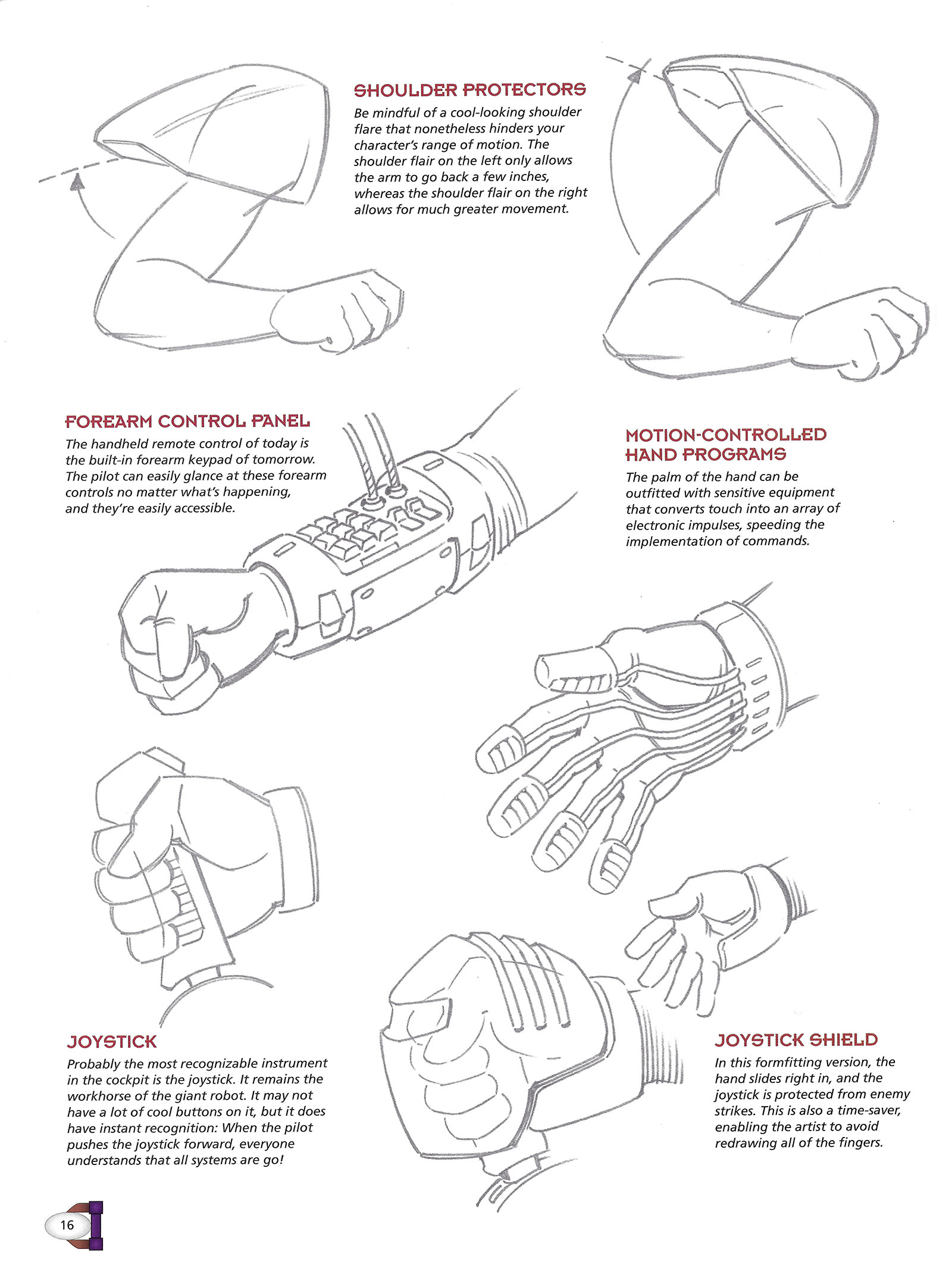 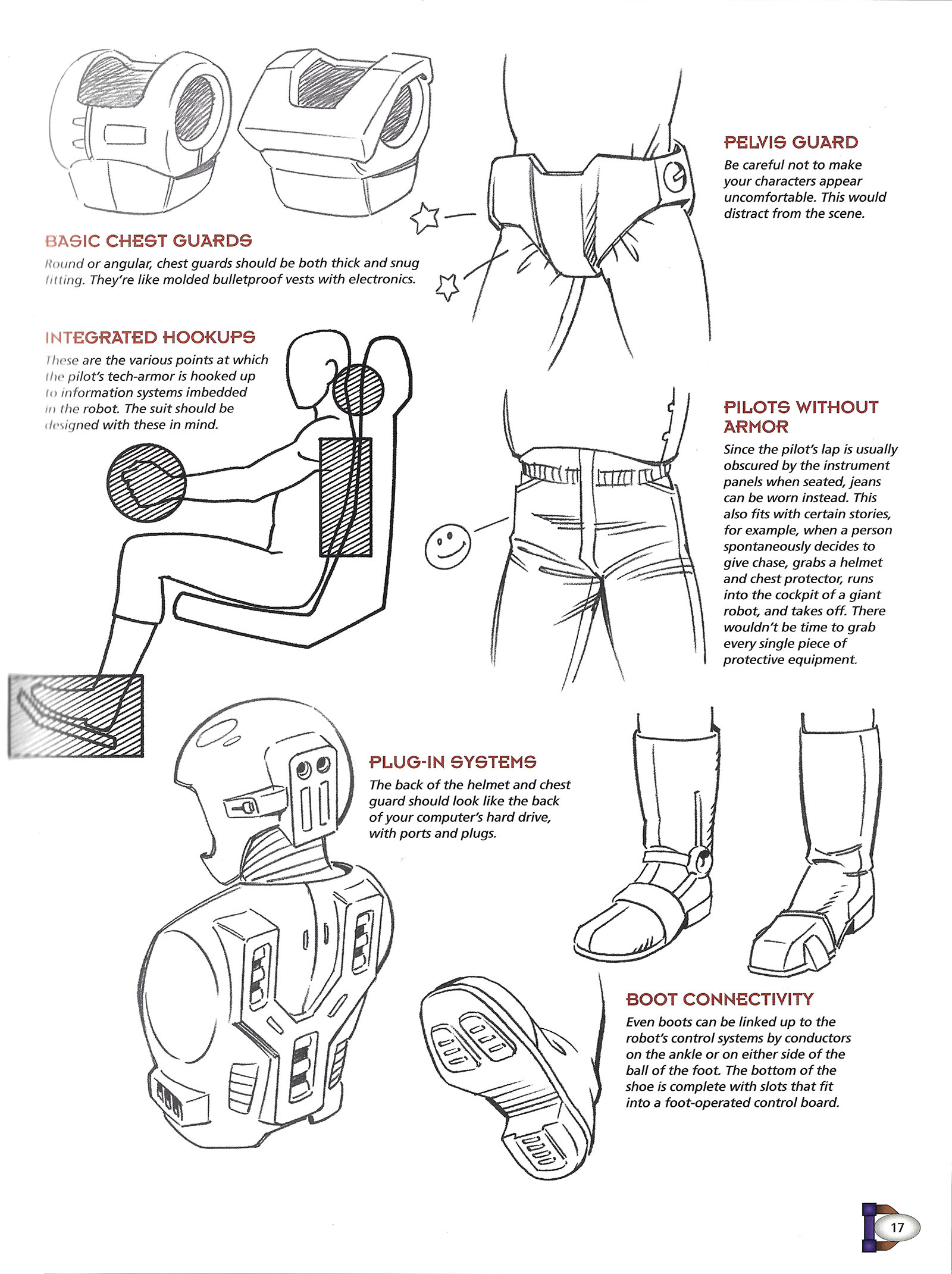 At the upper right is a point I wanted to make about articulation. Weird body armor around the business area is a bad idea not because of how it looks, but because it restricts character movement. Leaving it off makes a lot more sense. I’m not sure why Chris didn’t communicate that in his text. What he came up with instead is irrelevant. 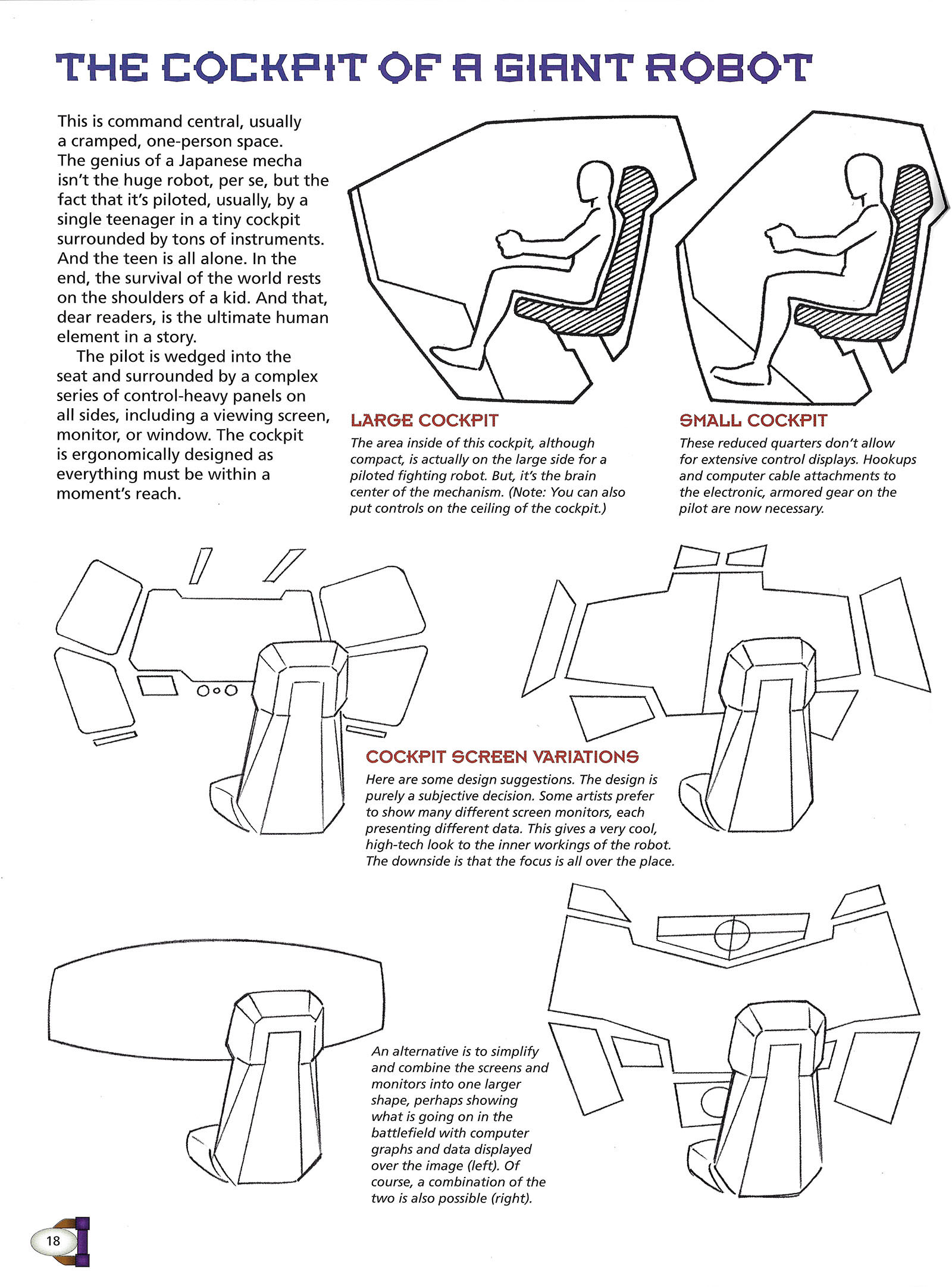 There are so many generalizations on this page, it made me question whether or not Chris actually watched mecha anime. Again, if you’re going to set yourself up as a teacher, you either have to be intimate with your subject or listen to people who are. 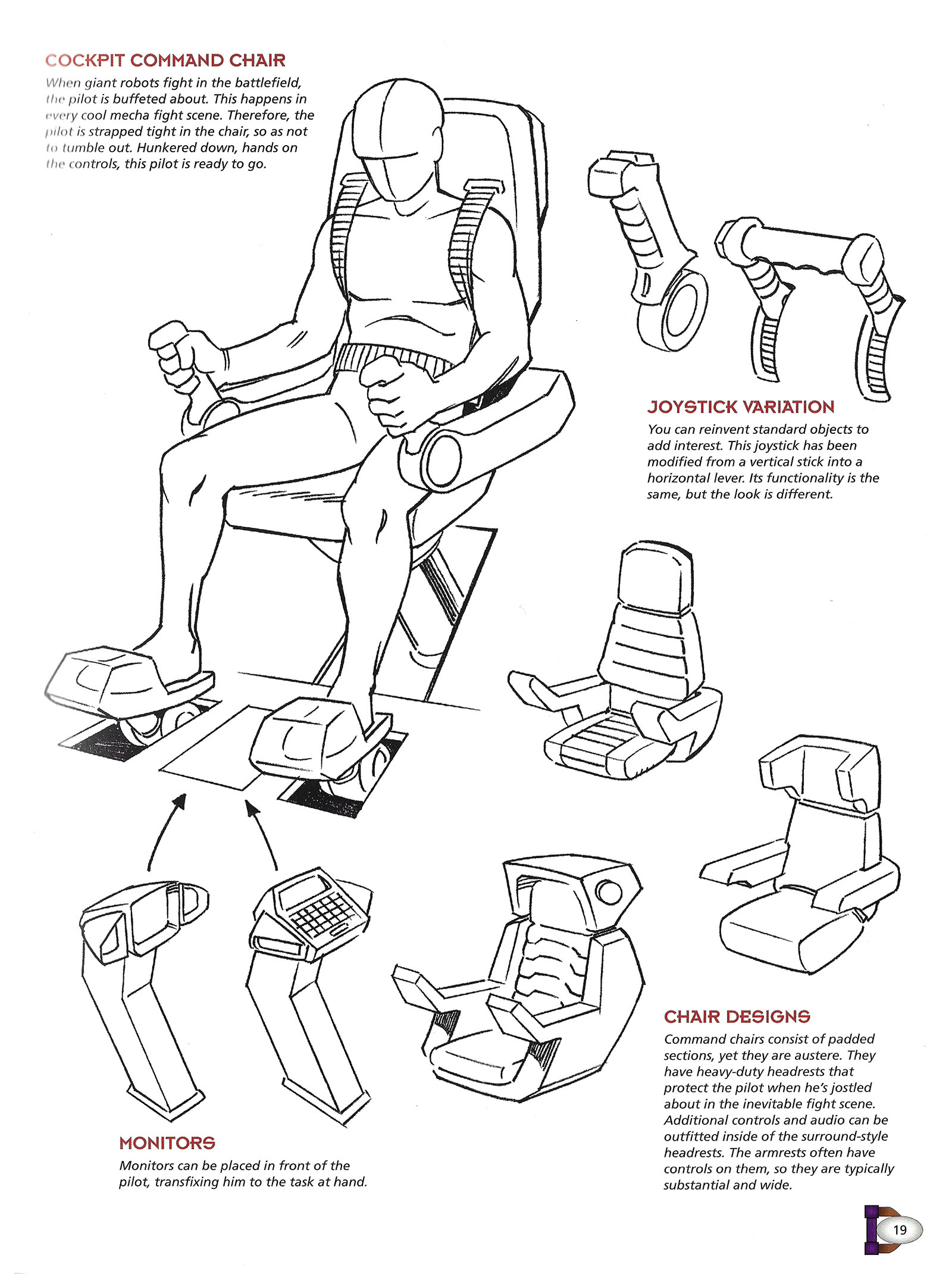 No problems on this page. Mainly because there are no distracting tangents in the writing. 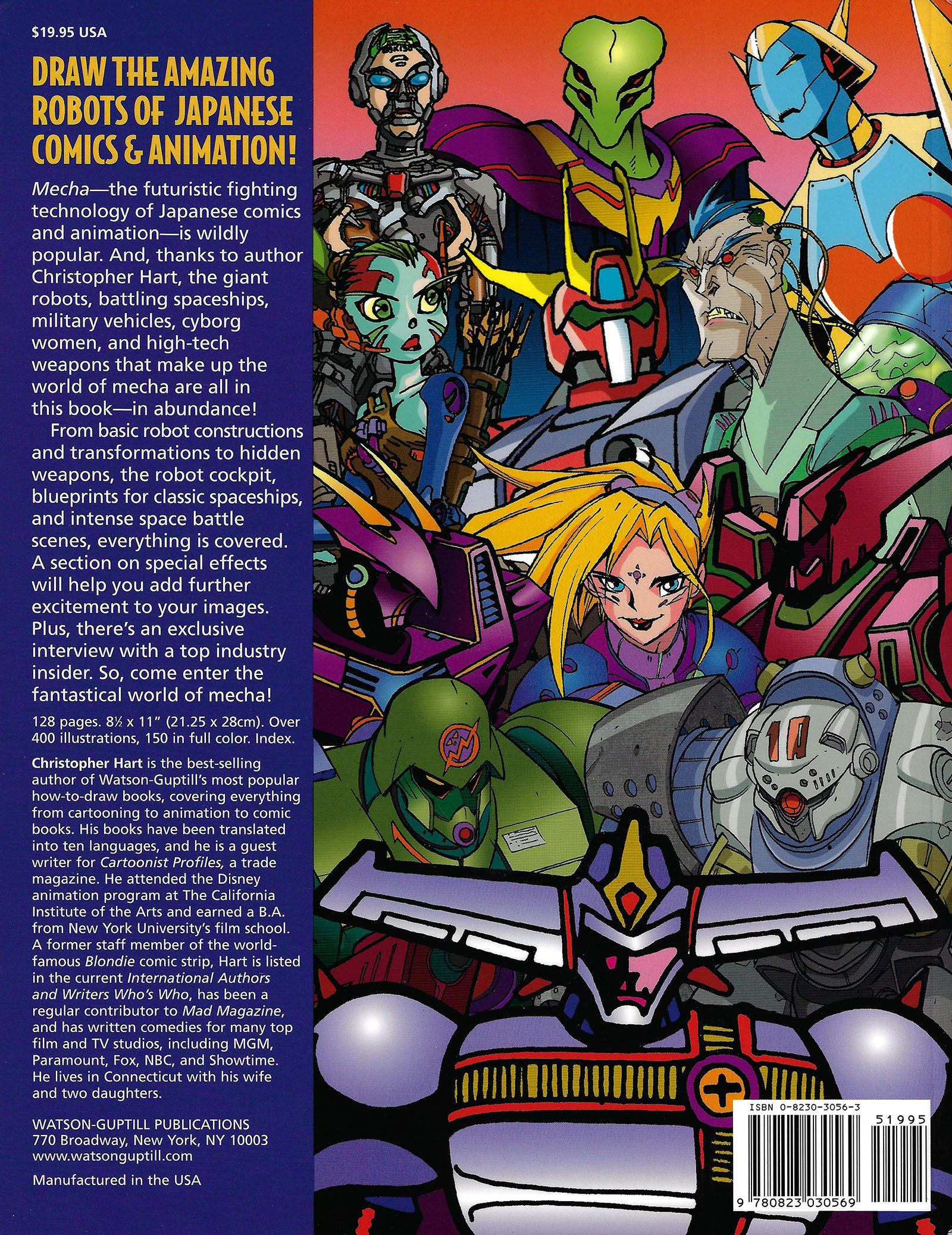 This is the back cover of the book, with a montage of drawings by all the different contributors (I was one of seven). I did the robot in the center with the red head/yellow fins. It looks rougher than the rest because it wasn’t meant to be enlarged that much. Same as the robot at the bottom. Some may like seeing a riot of styles and line weights in one image, but to me it just looks like a mess. Enough so to make me think this book has nothing to teach me.