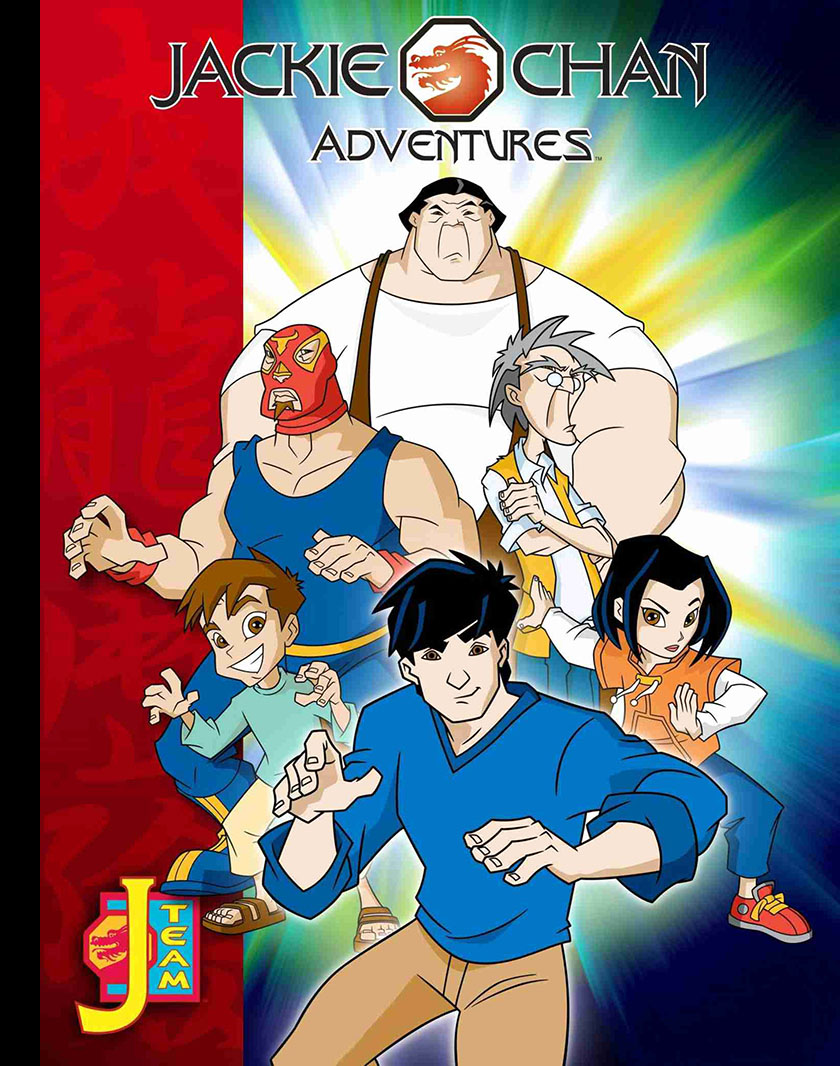 I’ll never forget the day I personally met Jackie Chan. I was directing Dragon Tales at Sony Animation Studio in 1998. Our studio head walked through the room with a short, quiet guy behind her. He had two pairs of sunglasses on. One over his eyes and another that dangled down from his ears to somehow hang under his chin. She pointed me out as a director as they passed by. We exchanged nods and they left. Later I asked who that was. “Jackie Chan.” Oh, okay. The glasses distracted me because they were just so weird.

He was there because Sony was developing a cartoon featuring him called Jackie Chan Adventures. Maybe you’ve heard of it. I didn’t know it was happening until months later when I’d finished Dragon Tales and was assigned to start working on the opening title sequence for JCA. I was kind of a go-to guy for titles, having done them for Extreme Ghostbusters, Godzilla, and Men in Black. They were always demanding, but certainly a feather in the cap when they were done.

The gimmick for this one was to splice in some live-action footage of Jackie that had been shot on the day of his visit. Head turns, reactions, expressions, etc. I was given a videotape of him mugging for the camera, and it was pretty much unusable. Mainly smiling, no indication of tension or jeopardy. I was told to just make do; it had been a one-time opportunity and it was extremely expensive. I worked around it as best I could, coming up with various random action shots. I turned them in and went on to something else and heard nothing more about it.

Some time later I saw the finished version. A few of my shots were in it, but it had been mostly re-engineered around NEW footage that got shot when everyone agreed it was necessary. Apparently it wasn’t a once-only after all.

I share that anecdote not to cast aspersion on anyone, but to illustrate how disjointed and unpredictable cartoon production can become. Someone works really hard to set up a perfect plan, reality turns that plan on its head, and we all end up patching it together with band-aids and luck until we get it done. If you’re lucky, they pay you to do it again. 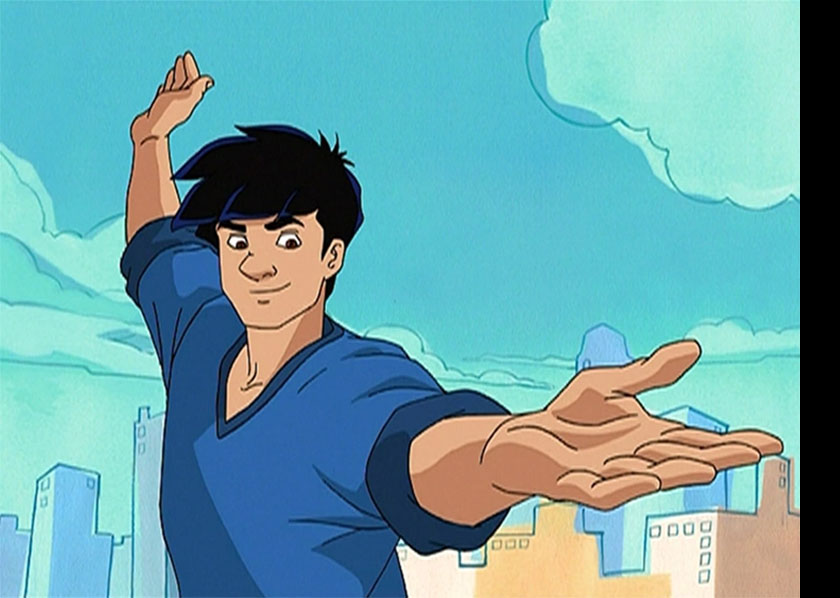 Jackie Chan Adventures got VERY lucky, renewed more than any other Sony cartoon from that era. The biggest orders we usually got were 40-episode syndication packages, but JCA got a whopping 95 episodes over five seasons. The crew roster changed over and over; nobody from season 1 was still there for season 5, all coming and going at the whims of fate and opportunity. Other than the opening title, I only contributed to a single episode since I was usually mired in other shows like Heavy Gear and Spider-Man.

I knew almost all of the directors, having worked with them on other Sony shows, and this was right in their wheelhouse. They were huge martial arts fans, constantly getting together at each others’ apartments to see the latest movies (often bootlegs someone had scored through diligent hunting). I was only a casual fan myself, and it’s still not a genre I seek out, but prior to the MCU it was the closest you could get to credible live-action superheroes. Those who had that genre in their bloodstream were the perfect candidates to make this show.

My turn at bat came in 2002 with the fourth episode of Season 4, titled Black Magic. I hadn’t seen any prior episodes, but that wasn’t necessary. I had plenty of action shows under my belt by that time, and knew how to be adaptable. All I needed was a solid script and I could take it from there. The characters were unique and fun to draw, and the segment assigned to me by Director Brandon Vietti was an act-1 fight sequence without a lot of baggage. In other words, I’d take a quick dip in the pool and then head off to other things before it could get repetitive.

The show was structured so that each season had its own quest. Season 4’s quest was to find nine Oni masks. Jackie’s group was racing against a villain named Tarakudo, who was going to use their power for evil. One of the masks was found at the beginning of this episode and the fight for it started right away. 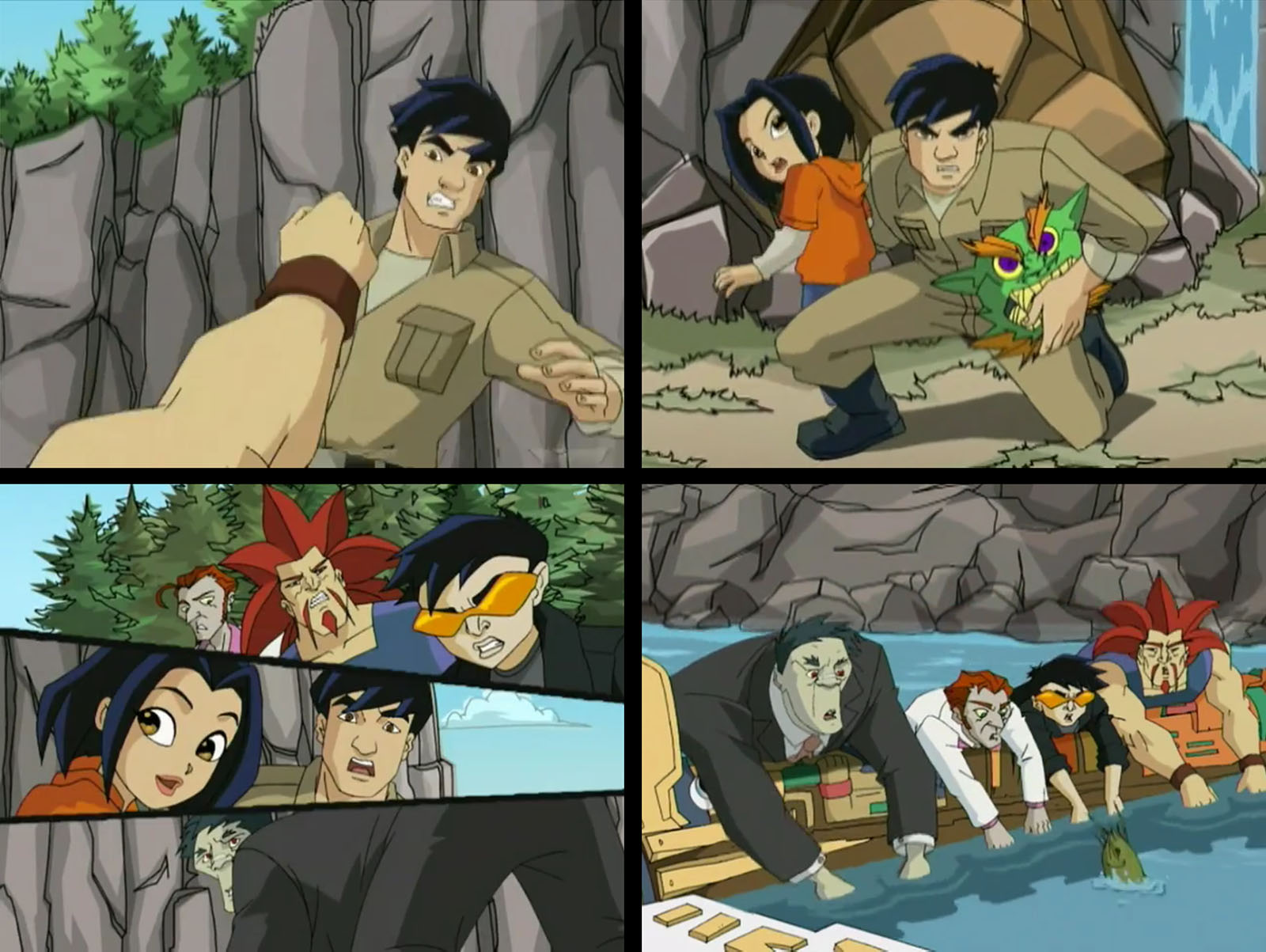 Watch it for free on Sony Crackle 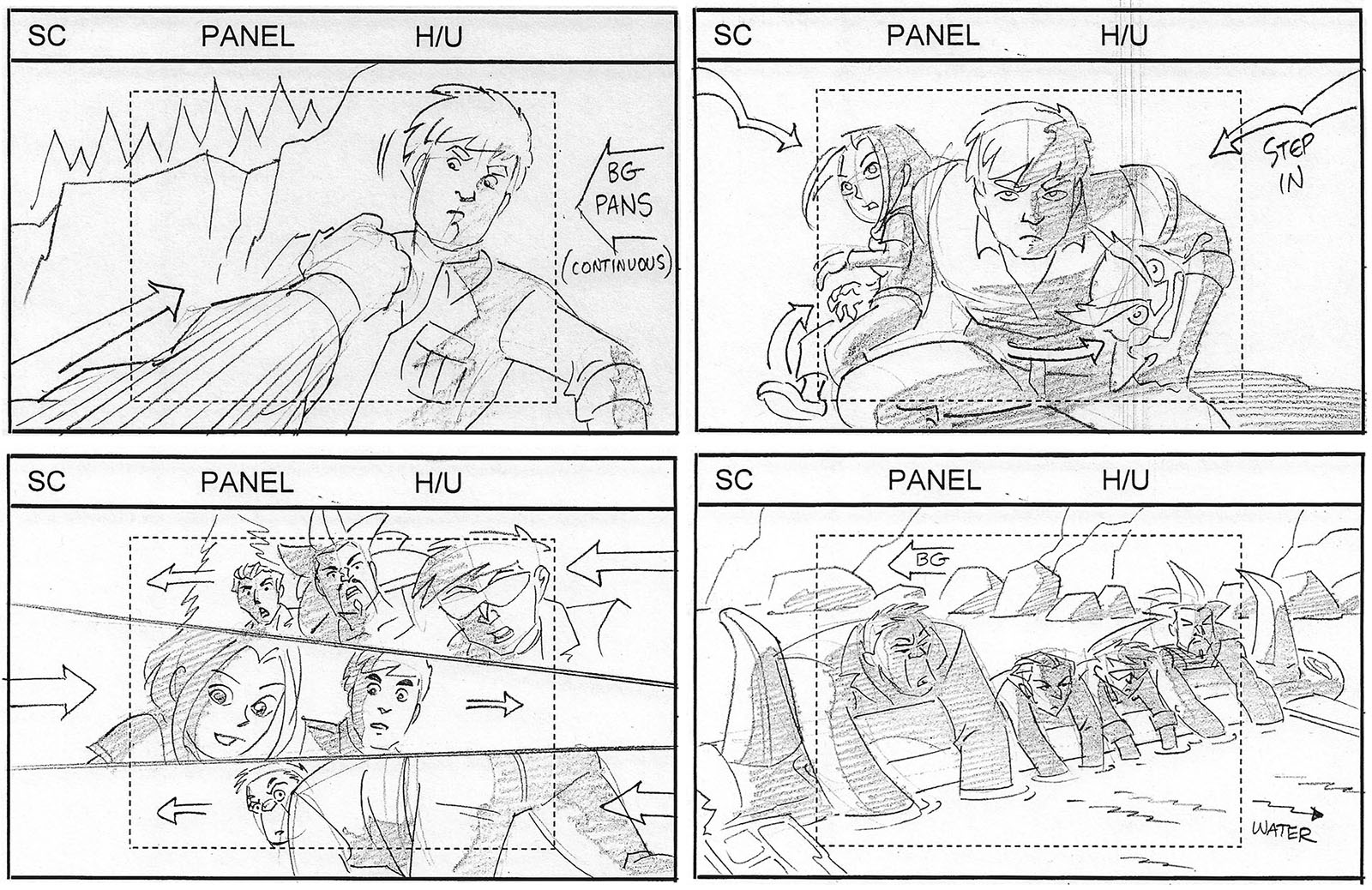 See my storyboard for the entire Act 1 sequence

As you go through it, you’ll see a post-it note here and there. That’s because this board had gone through a revision phase; I got a photocopy just before turning it in, and post-its were still attached so the director could see that his notes had all been taken care of. To a certain degree, you can judge your success in the storyboard biz by how many of these revision notes you get. It’s always a process of drawing what you see in your head and offering it to the director as “options.” If the director likes the “options” you came up with, they will stand. If not, they’ll be changed. 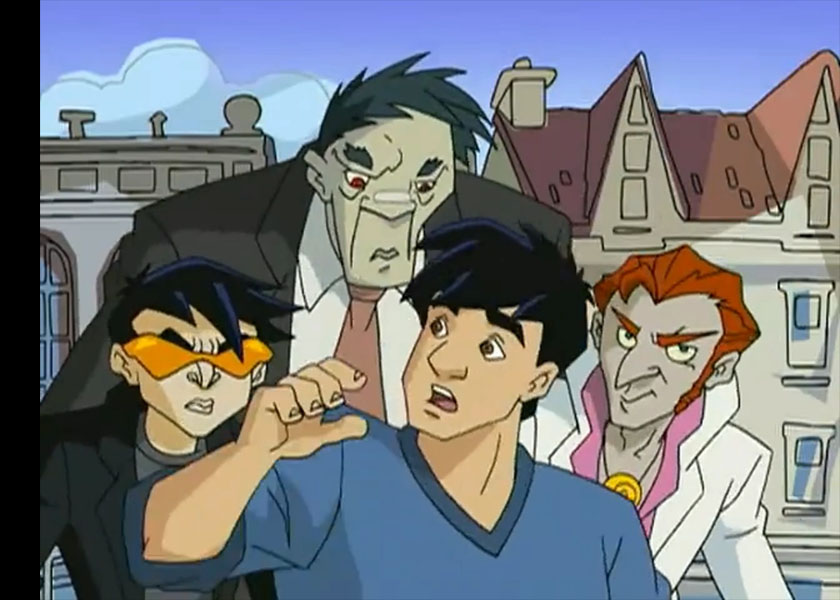 Most of my revisions, then and now, are technical. A shift in camera angle or a reframing of the action. I came in from the comic book world, so I have a bad habit of drawing things too large, as if they’re a panel on a page rather than a frame on a TV screen. I’ve met others with the same habit, so I take some solace in that. If I’m directed to throw a scene out and start over, it’s usually because I didn’t have all the information I needed to construct it correctly the first time. Every show and every director is different, and they all have something to teach you.

Jackie Chan was an easy fit in that regard. It was short and sweet and didn’t overstay its welcome. Nor did I. The following year, I was off to new lands when I signed on for Xiaolin Showdown at WB Animation. I’ll share that story on another day.

Jackie Chan Adventures ran for five seasons on Kids WB (September 2000 to July 2005), then went into reruns on Cartoon Network and Toon Disney’s Jetix. Seasons 1 and 2 were released on DVD, and the entire series can now be found (for free) on Sony Crackle or (behind paywalls) on Youtube, Amazon Prime and Apple TV.

All episodes (free) on Sony Crackle

Fan wiki page on my episode 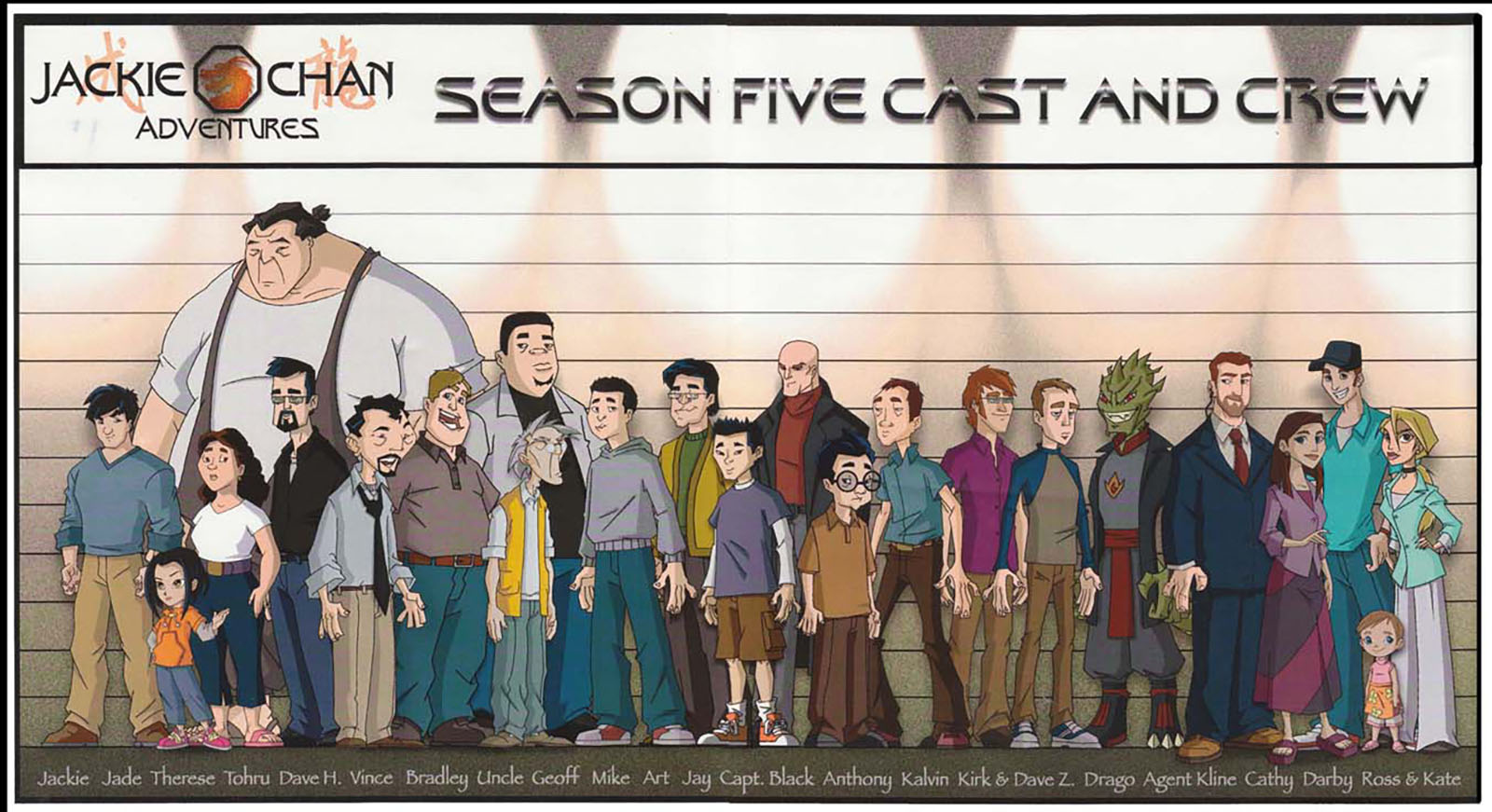 A portrait created by Character Designer Jeff Matsuda as a final sendoff, combining the main characters with the production crew. You’d think fun stuff like this happens all the time in a cartoon studio, but honestly everyone is usually so overwhelmed with work there just isn’t much fuel left over. That makes a keepsake like this all the more special.