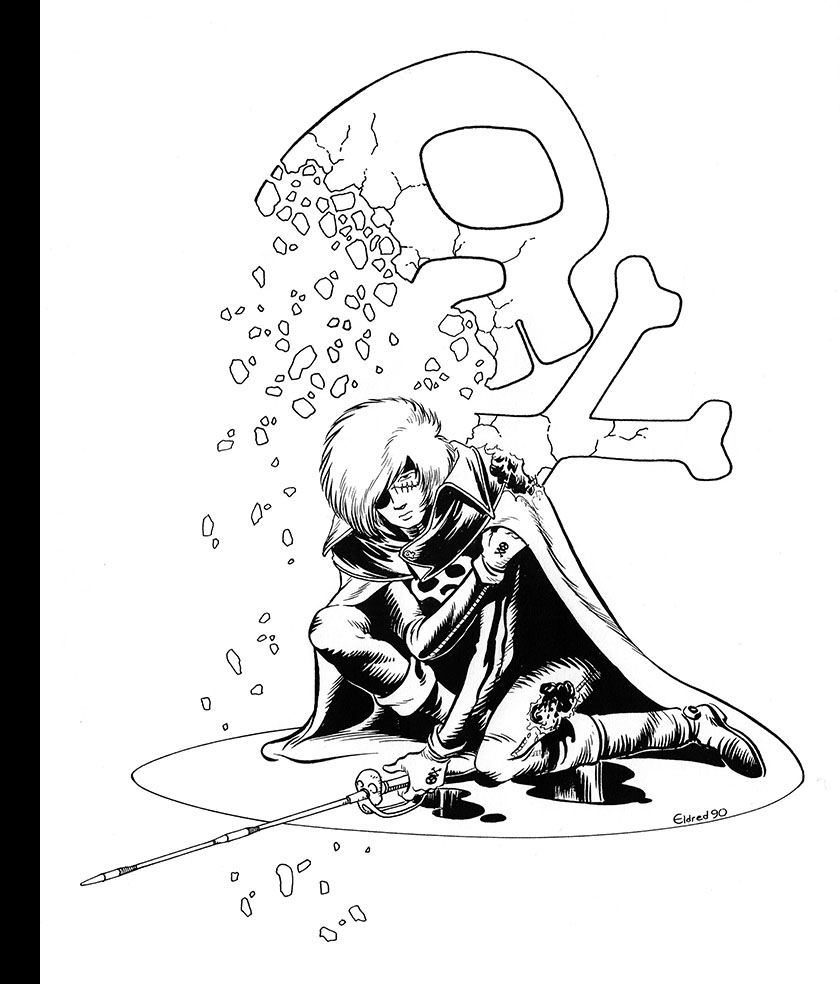 I’ve already described how I landed the privileged position of drawing Captain Harlock comics here. This page picks up after the first two issues with a 6-part miniseries that was next on the agenda.

By the time I began this project, making comics had been my full-time job for about year and a half. In that time, I penciled 36 individual books and inked an additional 5. Starting with Deathshadow Rising, I would be penciling and inking a comic for the first time. It’s a little odd to say that since I started out as my own inker back in the kid comic/fanzine days. But it’s worth drawing a distinction, because true comic book inking is a whole separate animal.

In case you’re wondering what an inker actually does, I’ll sum it up this way: an inker adds weight, depth, and texture to the art. A penciler can suggest those things with pencil lines, but a penciler also has to carry the load of deciding what you see in all the individual panels. That involves page design and layout, creating a montage of images and composing each object from a specific angle.

I can’t speak for all pencilers, but my method is to draw a thumbnail (to design a page) and then a full-size layout (to compose the individual panels) before moving on to the actual penciling (for details). That means I’ve drawn each page three times before it gets inked. As you can guess, that’s a lot of work. But for the sake of the finished product, I still put all the detail I can in the penciling to show the inker what I’m looking for. 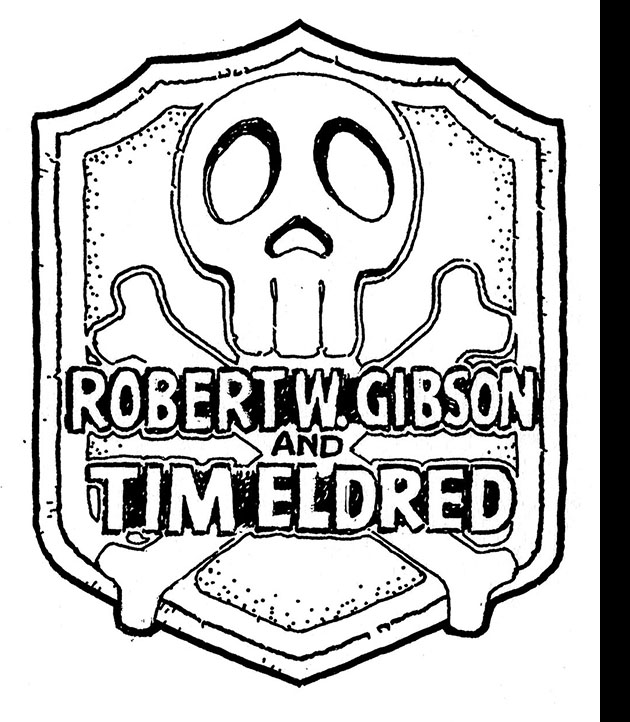 That changes quite a bit when I’m the inker. I can’t say it gets easier, but it definitely gets simpler. I can pull way back on the penciling, just drawing the bare minimum since I’ll know exactly what to do when I come back in with the ink. Because of that tradeoff, I was still able to maintain a 4-week production schedule once I took on the extra work.

This explains another thing an inker does: keeps a book on schedule. Few artists can do it all on a monthly deadline. If one person does the penciling and another does the inking, you now have a production line and each of them can take a full month to do their part. While the inker is working on issue 4, the penciler can move on to issue 5. The letterer has their part to play as well, but here too I was fulfilling that role.

Doing your own lettering is another way to save yourself some labor. If you do the lettering before the inking, you’re filling up some of the real estate on a page. You don’t then have to fill that same space with art. It sounds obvious when I state it that way, but that’s not always how it’s done. When I worked as an in-house letterer at Malibu Comics, the lettering was done AFTER the inking. We would create the word balloons on adhesive paper, cut them out, and paste them into position like stickers. That’s the worst possible approach, because – by definition – you end up covering finished art. All I could do was shake my head in sorrow when I thought about how much drawing time had been invested in stuff no reader would ever see. It felt like committing a crime.

The idea behind that approach was that the art would be photographed before the lettering went on, and the “clean” version could then be marketed to foreign publishers who could start fresh with their own lettering. They wouldn’t be stuck with word balloons sized for English text. It’s an acceptable approach if you (A) pay your artists a little more for the extra labor and (B) actually follow through with foreign publishing deals. But I sorta think Malibu did neither. 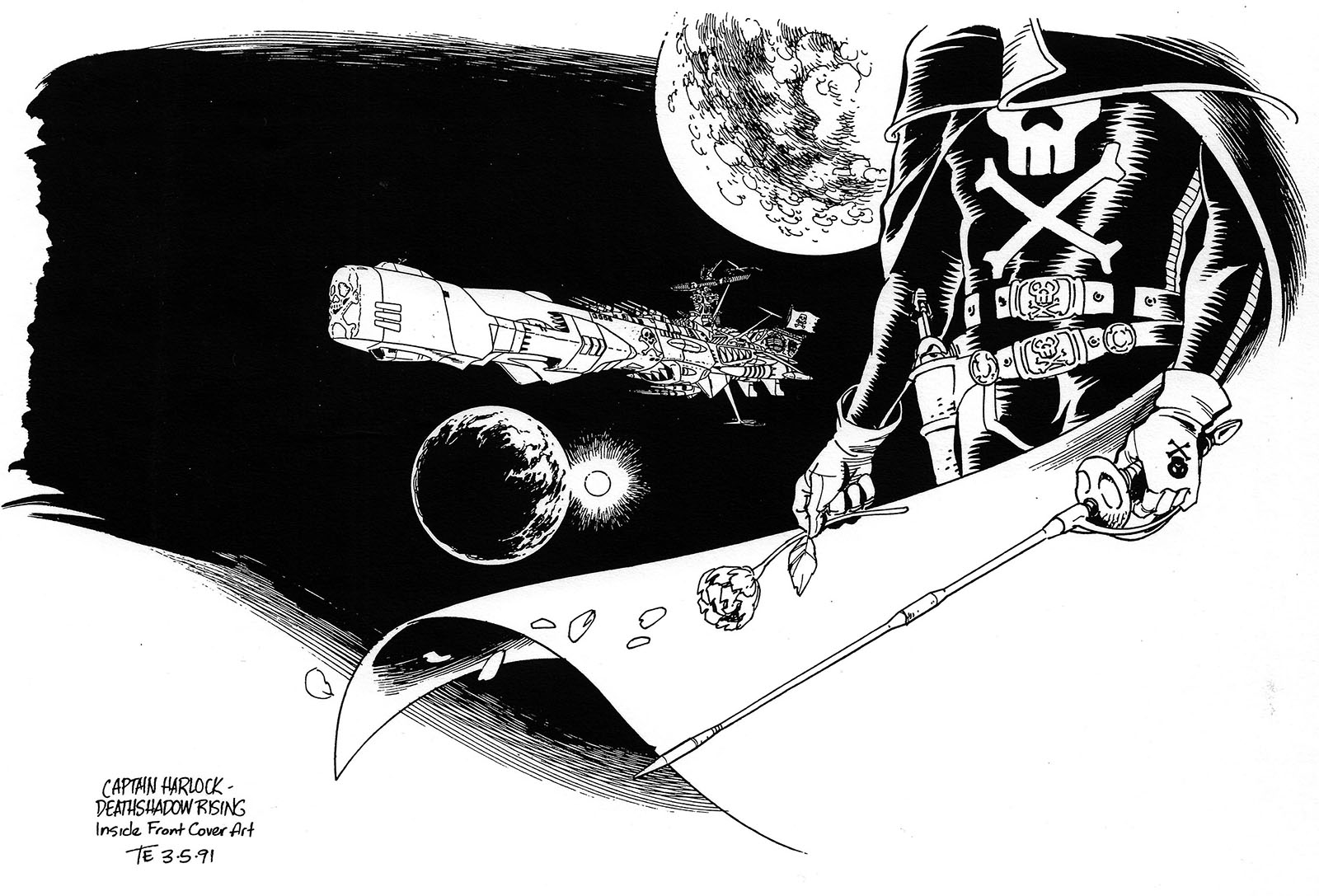 Anyway, I’ve drifted far enough from what this article is about: the first two issues of the Captain Harlock miniseries Deathshadow Rising. The title refers to the legendary space battleship commanded by Harlock before he acquired the Arcadia. It was seen in My Youth in Arcadia (movie) and Endless Road SSX (TV series) and had occasional cameos in other Leiji Matsumoto productions. Robert Gibson’s idea was to resurrect it with A.I. upgrades and put it back into the field of play between Harlock and the Illumidas space navy.

I suggested that we should use it to really beat up on the Arcadia, even shearing off its famed figurehead in battle. Robert didn’t want go that far, but he gave me the next best thing to draw.

As I developed my inking style, the key was to decide what to draw with pens and what to draw with a brush. The dividing line was mechanical vs. organic. Pens are a mechanical tool with precise line widths, ideal for rendering mechanical objects. A brush is an organic tool that gives you variable line widths, ideal for living things. But there was also some crossover to consider; many costume details are more easily drawn with pens, like piping and seams on cloth, or the emblem on Harlock’s chest. And once in a while, you’ll want a curve or reflective effect on a mechanical object that looks better with a brush line. The point is to give yourself multiple options for the best results.

That said, I was still a beginner in terms of full-blown comic book inking at the start of Deathshadow Rising with just five previous outings (all on Emeraldas and Harlock #12). I didn’t yet have full control of the brush as a drawing tool, so a lot of it looks clumsy to me now, especially the hairdos. But you gotta start somewhere. Every day was a step forward. 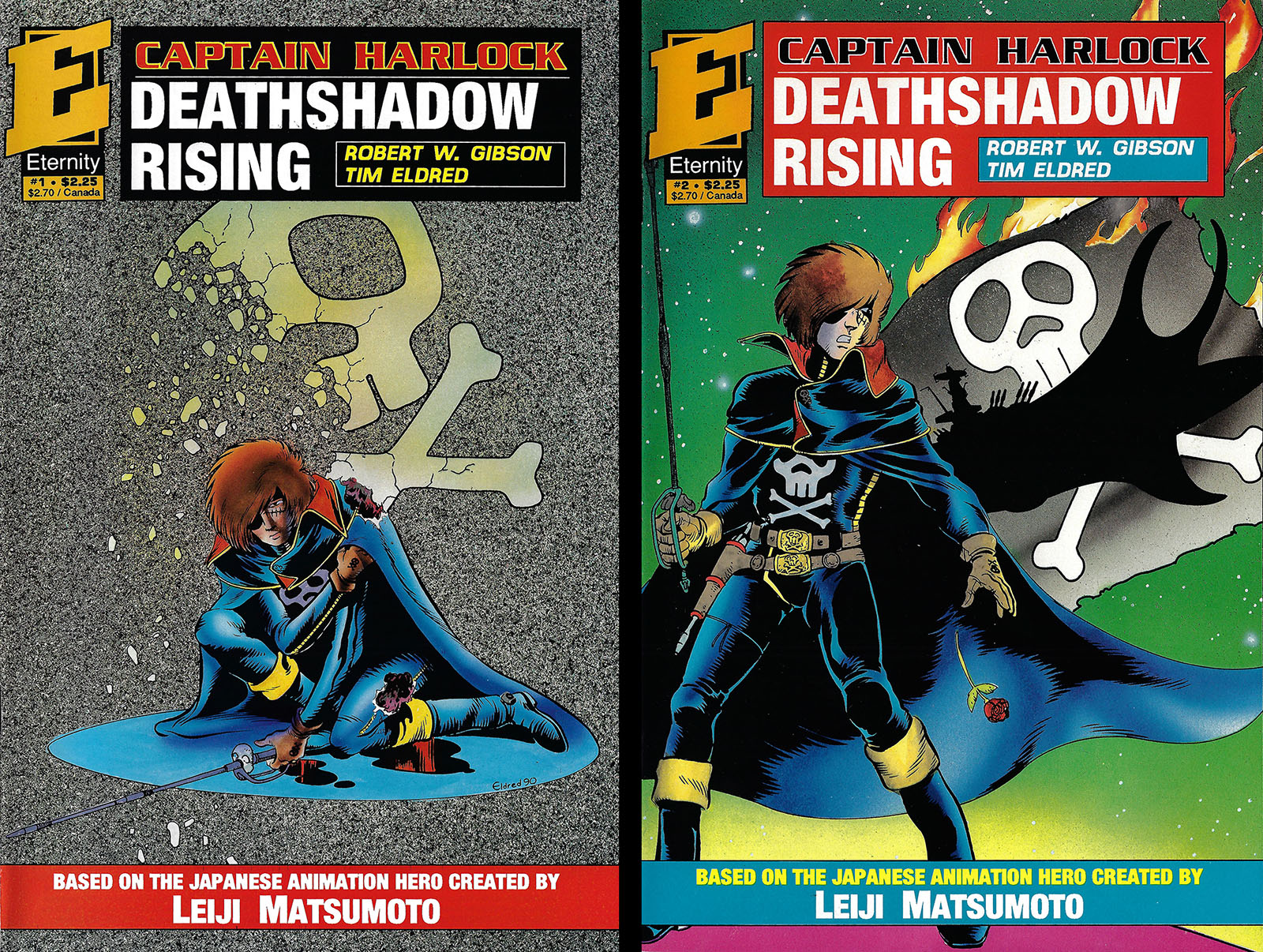 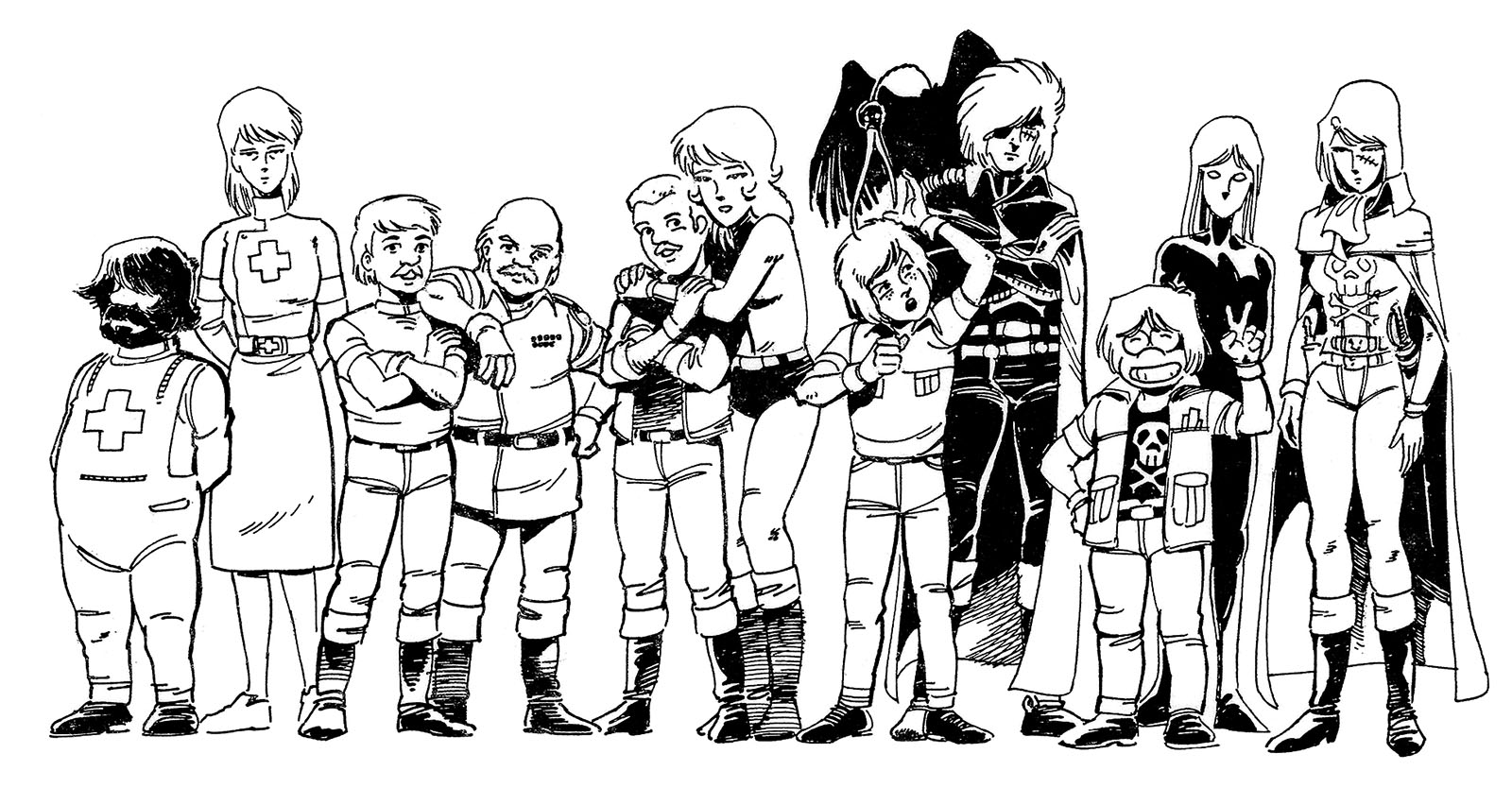 Backup features from issue 1
This entry was posted in Pro Comics , What’s New