How Captain Harlock changed my life, 1990 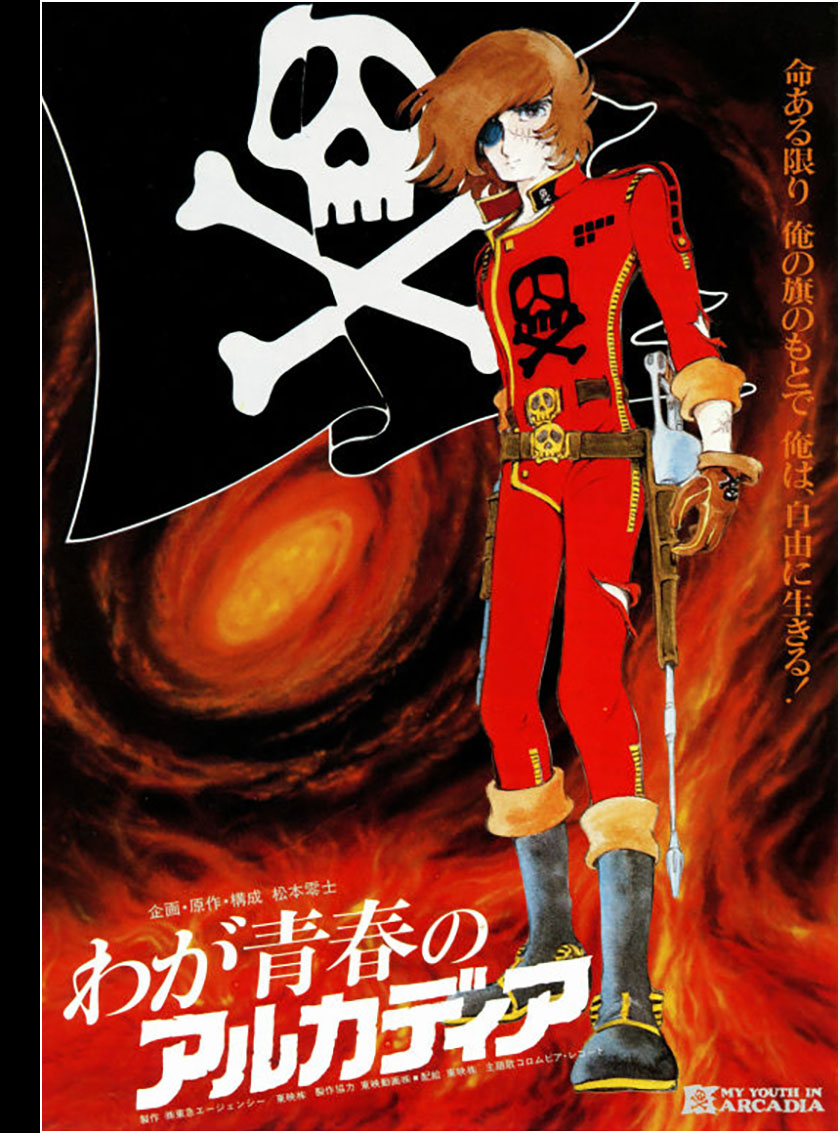 I first saw Captain Harlock thanks to my anime mentor Steve Harrison when I started getting invites to his watch parties in 1983. Space Battleship Yamato was our shared gateway drug, and that naturally led us to its “cousin.” The two titles were closely linked at one time; read all about that connection here.

The first Harlock anime that crossed my optic nerves was the “origin” film My Youth in Arcadia. It was a masterpiece of mood and art direction, and pretty much the state of the artform in the year it was released (1982). The character debuted a decade earlier in manga by Leiji Matsumoto, finally popping out at the other end as an American comic book in October 1989.

The publisher was Eternity comics (an imprint of Malibu Graphics), and I was lucky enough to connect with them in June 1989. This led to me working on Lensman, Broid and other things I’ve already documented here at ArtValt. Captain Harlock #1 was still four months away when we first met, but they were just starting to promote it and they certainly had my interest. Ben Dunn had already landed the drawing assignment (he was the one who led Malibu to the title, after all), and I remember wishing fate had somehow worked to put me in that chair. Fortunately, fate was still working on it.

I couldn’t imagine Ben ever giving up such a plum assignment. As I toiled away on Lensman, Harlock comics rolled out one by one. He was obviously having a great time in a dream job. But as I communicated with writer Robert Gibson (who I’d known for a few years), I learned that Ben was getting increasingly bored with it. Actually, I could understand why. I liked Lensman a lot when I first saw the anime, but living with it month in and month out was another matter. 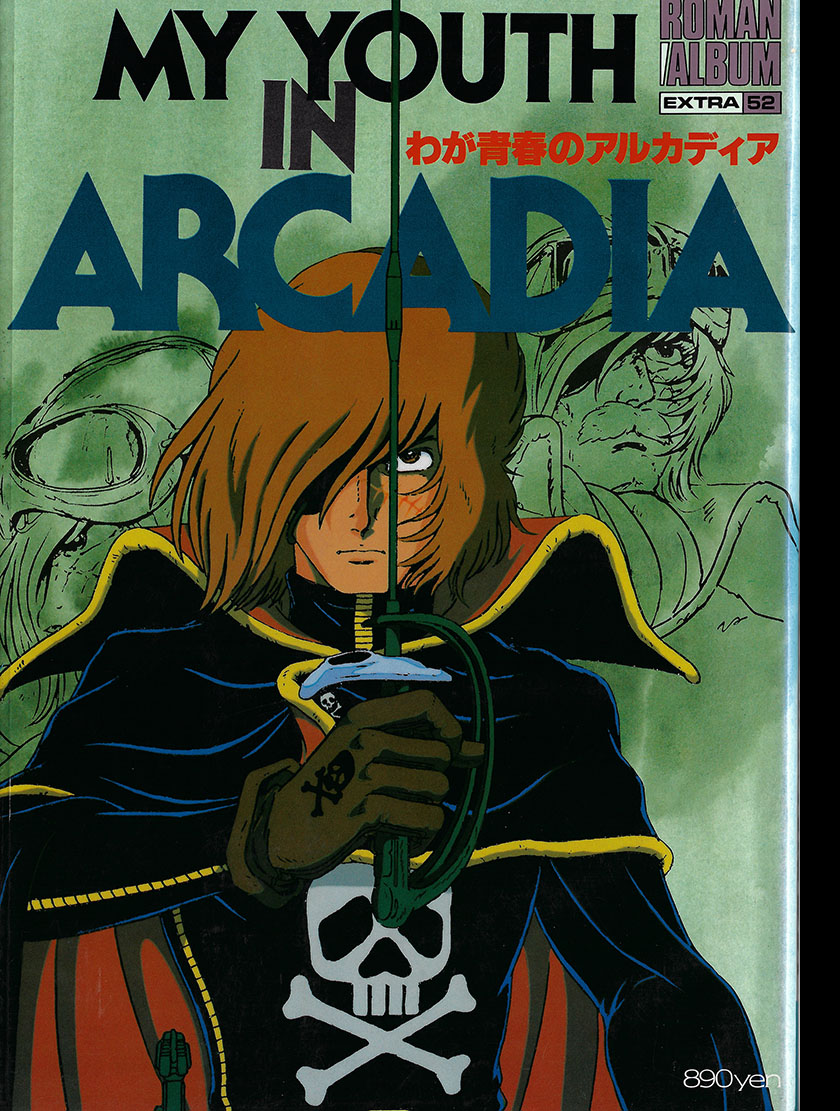 Right around the time I was wrapping up Lensman, the word was given; Ben wanted to bail out. His inker Pat Duke was initially considered to replace him, but that fell through as Pat drifted farther behind in his deadlines. The captain’s chair was mine if I wanted it, and you freakin’ bet I did.

The first stage of this was for me to take over for Pat on the 4-issue Emeraldas miniseries, which you can see here. After that I was to take on a new Harlock series, but they rolled me in sooner than planned. Captain Harlock #12 had reached the same stage as Emeraldas with Ben’s very rough pencils. After Emeraldas #4, I jumped right in and took the issue to the finish line. Then I would take full command with the art on #13 and continue forward from there.

This opened up a nice long run with Robert Gibson writing and me drawing 15 issues in a row. It was a huge growth opportunity that I’ll be describing as we move through them. For now, my focus is just on these two transitional issues.

Issue 12 was the second of a 2-parter. The rough state of Ben Dunn’s penciling was no longer a surprise. What WAS a surprise was how little content there was on the pages themselves. This was how I could tell that Ben’s interest really was fading; very little movement, very little mecha, and lots of heads-only panels against empty backgrounds. Those are sure signs of an artist wanting to get through it as quickly as possible. I don’t mean that as a slight against Ben specifically, it’s a well-known phenom in the comics world. Sometimes it indicates disengagement, other times it means someone wasn’t given enough time. Many, MANY comic books slide over the finish line at the last possible second due to problems no one can control. 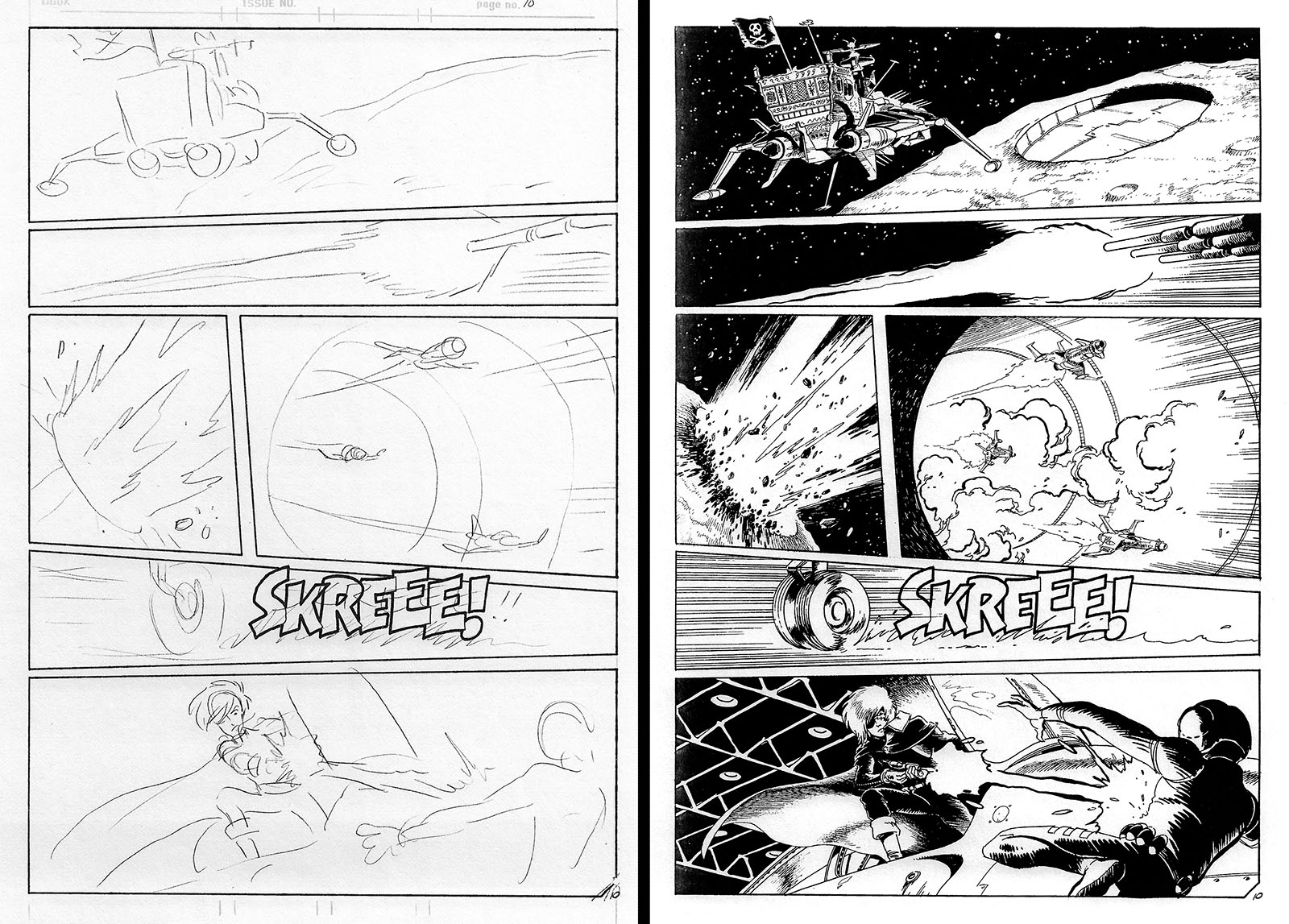 I wasn’t in a position to change what Ben had done, so instead I did my best to fill out what was missing while continuing my own education in brush inking. I had all four issues of Emeraldas under my belt, but I was still well short of mastering the craft.

When I shifted from #12 to #13, it put me back in the penciler’s chair where I had much more confidence. Now the task was to start adapting Leiji Matsumoto’s style into my work. Or, to be more accurate, learn how his style had been interpreted for animation and adapt THAT. The heavy lifting had already been done by Japanese artists, and my role was now essentially that of a key animator; to use the character and mecha designs to create the scenes called for in the script. 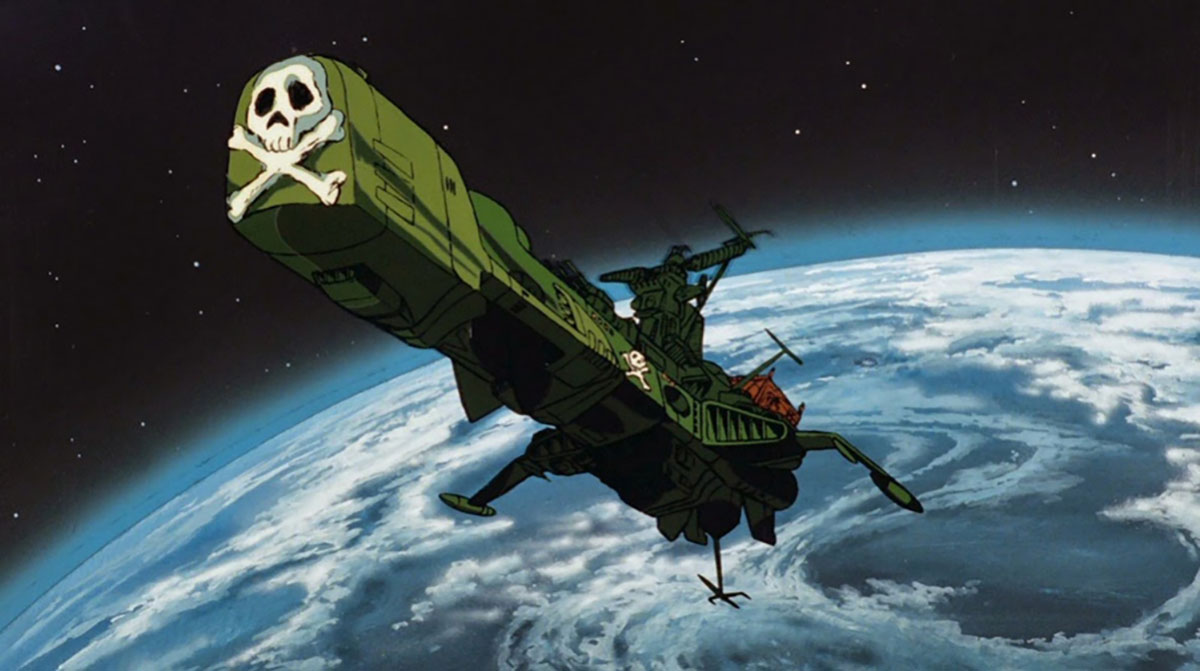 The hardest part of this by far was drawing Harlock’s spaceship, the Arcadia. It’s an extremely complex vessel, designed by the legendary Kazutaka Miyatake. Ben’s approach was to minimize it, so Robert Gibson ended up not writing a lot of space action. To me, the space action was the best part and it’s what I wanted to draw the most. Fortunately, I already had an Arcadia model kit in my collection to build for reference. If not for that, the job would have been MUCH harder. But by the end of the run, I could draw the entire ship from memory.

My inker (for issue 13 only) was Steve Krueger, who worked with me for the entirety of Broid and Chaser Platoon. The reason it was one issue only was that my third original series, Ground Zero, started right after this and he would shift over to that. But the thing that made this a personal landmark was quite unexpected: it’s the first comic I lettered myself. It seems like something I should have been doing all along, but I just never had time. I don’t remember what changed, but it was permanent; I would be lettering all my own comics from here on out. Maybe it was just to collect a little more money. Either way, it paid off in ways I never could have predicted.

Once my editor at Malibu saw that I could do this, he quickly offered me more lettering jobs. I added them to my daily routine and they kept on coming. Ultimately, it had a greater impact than all the penciling and inking put together. In 1992, Malibu’s fortunes were rising fast and they went into rapid expansion. They needed to add an in-house production crew, which included an art department that would almost exclusively handle lettering. I was the one they chose to lead that department, which resulted in them moving me from Michigan to California at the end of the year.

To say that this was a career changer would be putting it mildly. It was a life changer. And it all began with Captain Harlock #12.

Listen to a conversation with me and writer Robert Gibson here 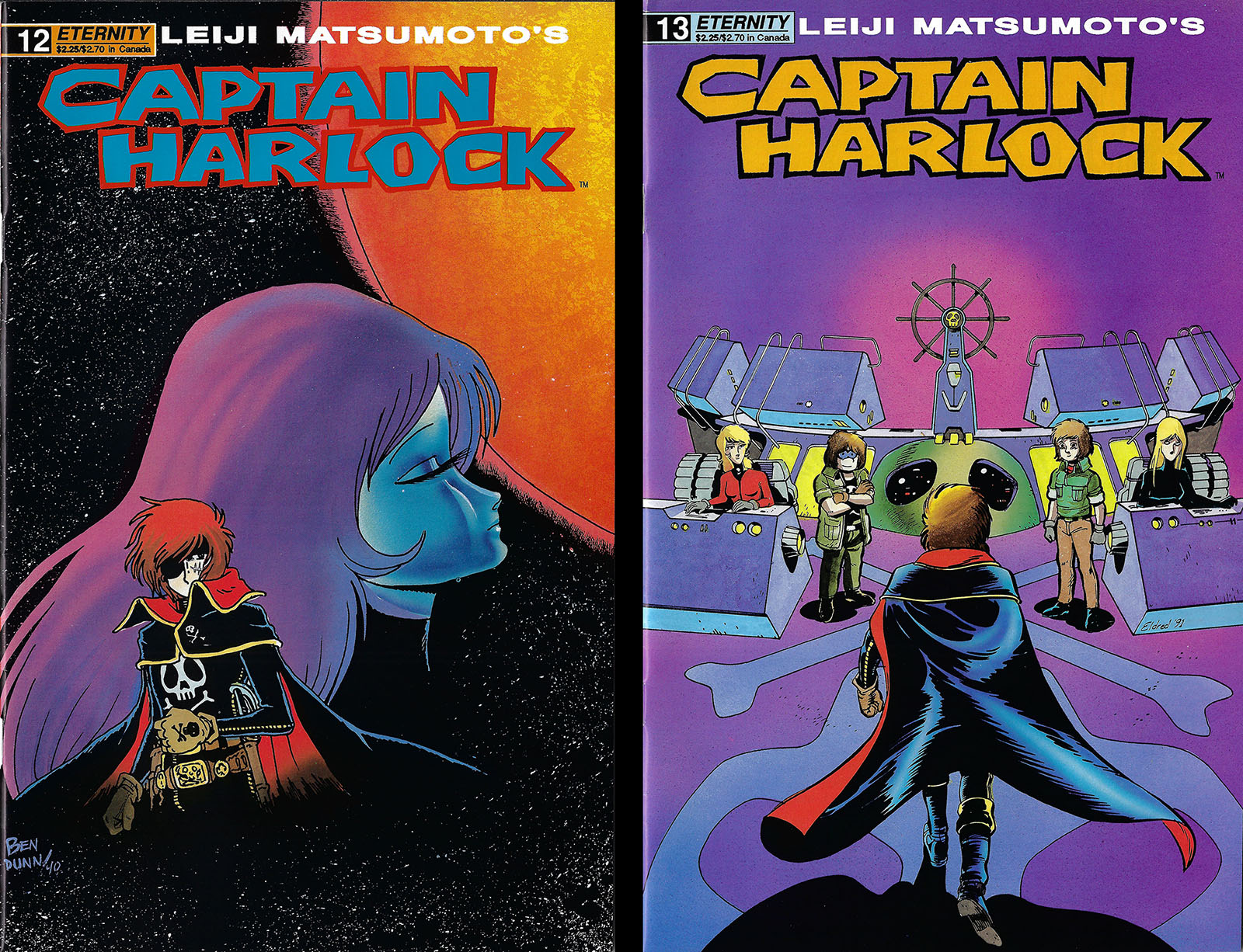 Here’s an earlier Captain Harlock drawing from 1986. I put it on a card and sent it to a girl. The following year, she became my first wife. How’s that for life-changing? 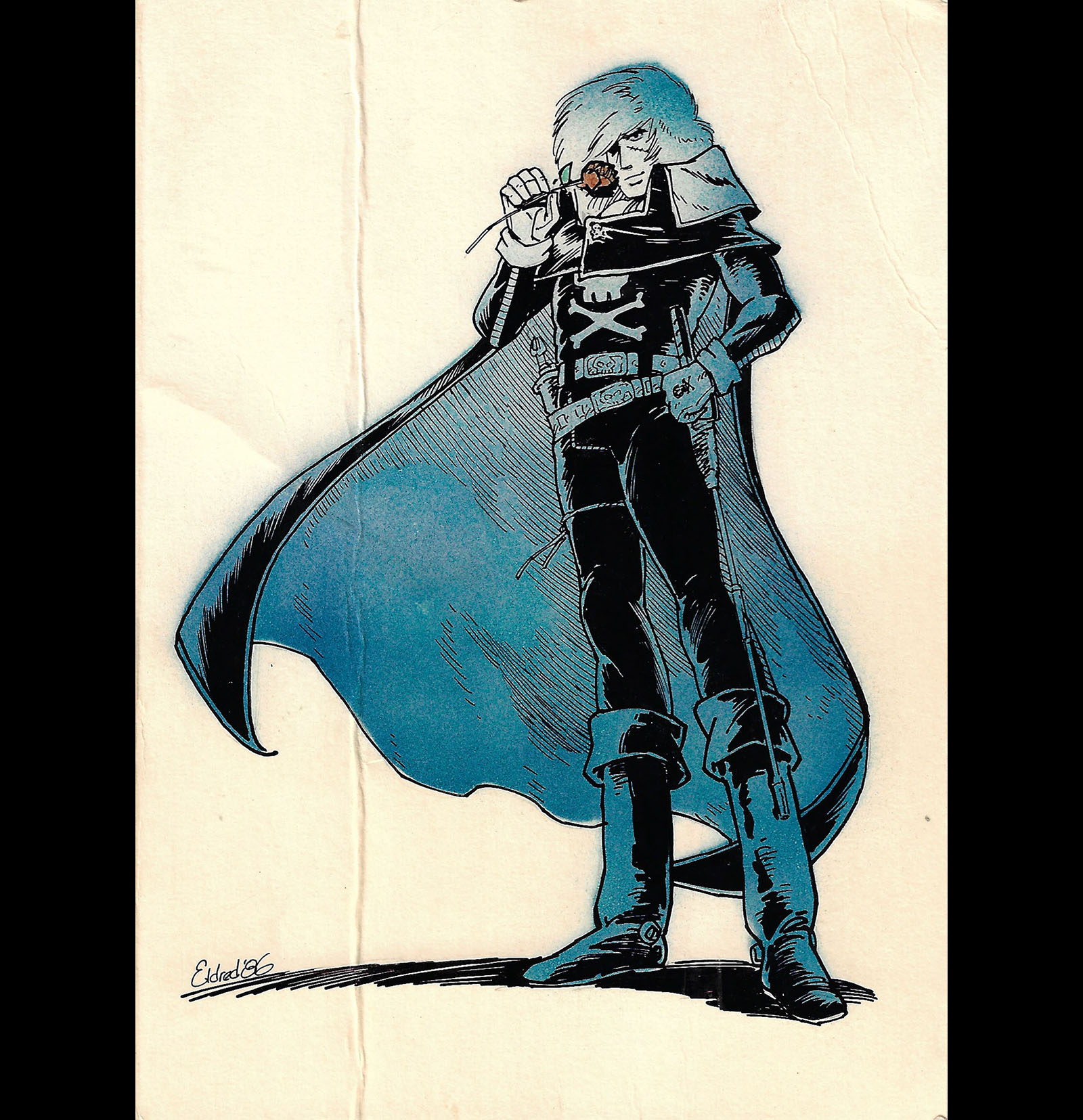