For everything you see on TV or a big screen, there’s something else you won’t. More like ten other things. These are the projects that didn’t get past the gatekeepers, and in any given year they consume an immeasurable amount of creative energy. Everyone in showbiz, even the very successful, has a stack of them stored away, rejected and abandoned. For each one, there is a scar on someone’s heart to show for it.

The scars heal over time, but the creative passion is never forgotten. That passion kept someone up past their bedtime, toiling away in stolen hours to flesh out an idea that had its grip on them and wouldn’t let go. Characters, epiphanies, entire worlds described in words and images that would never see daylight.

That’s sort of what this collection represents. 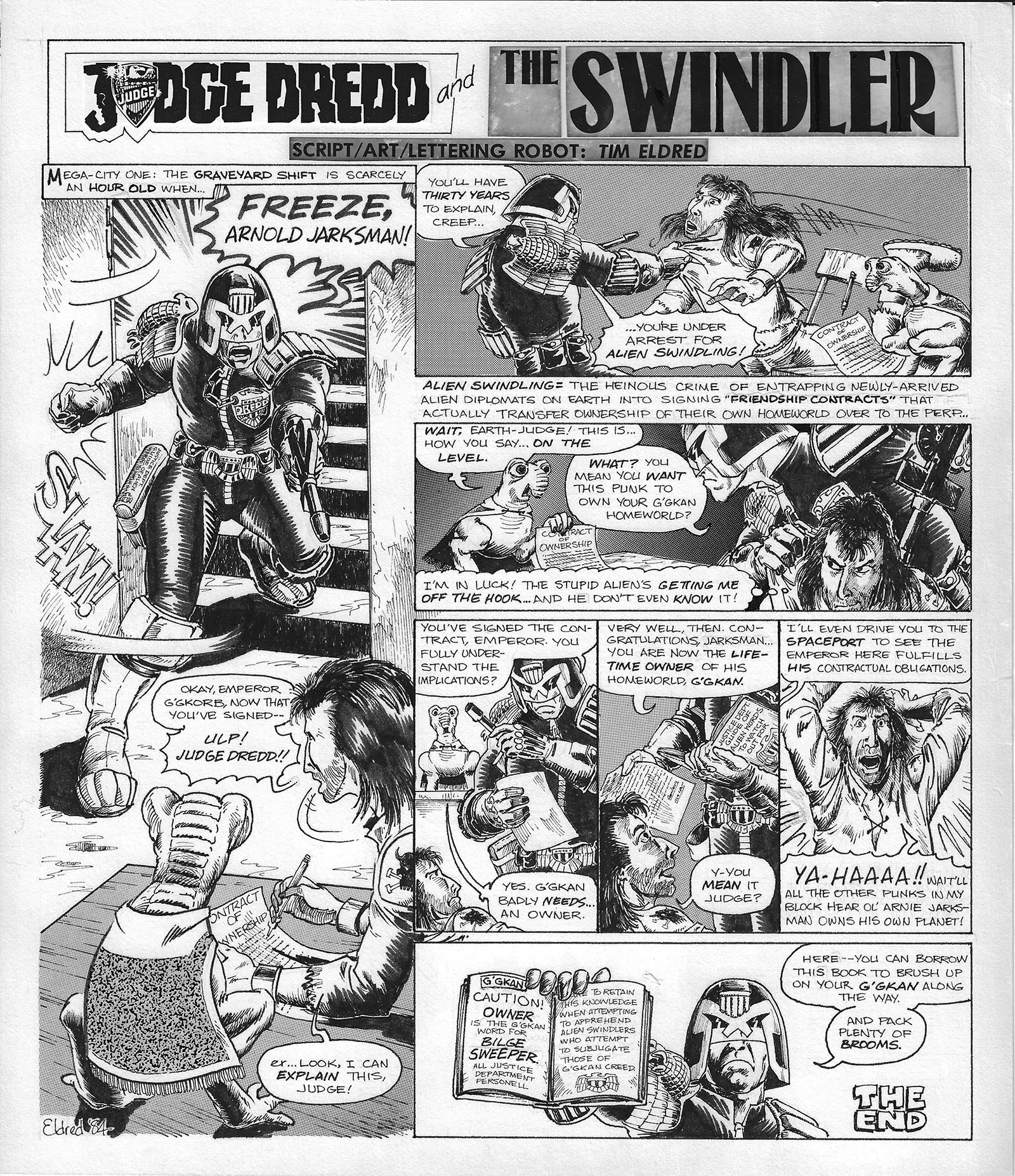 In late 1982 I discovered 2000AD, a weekly SF anthology comic from England, the main character of which is Judge Dredd. For someone who only read Marvels, it was a lightning bolt to the head. It demonstrated loud and clear another approach to making comics; irreverent, textured, and challenging. Exactly the kind of comics I was ready for.

They published art by readers in almost every issue, so I thought I’d give it a go. I blew past the idea of a pinup and went for a self-contained single-page Dredd story. I sent it in and kept reading. I’m still reading today, and it has yet to appear. 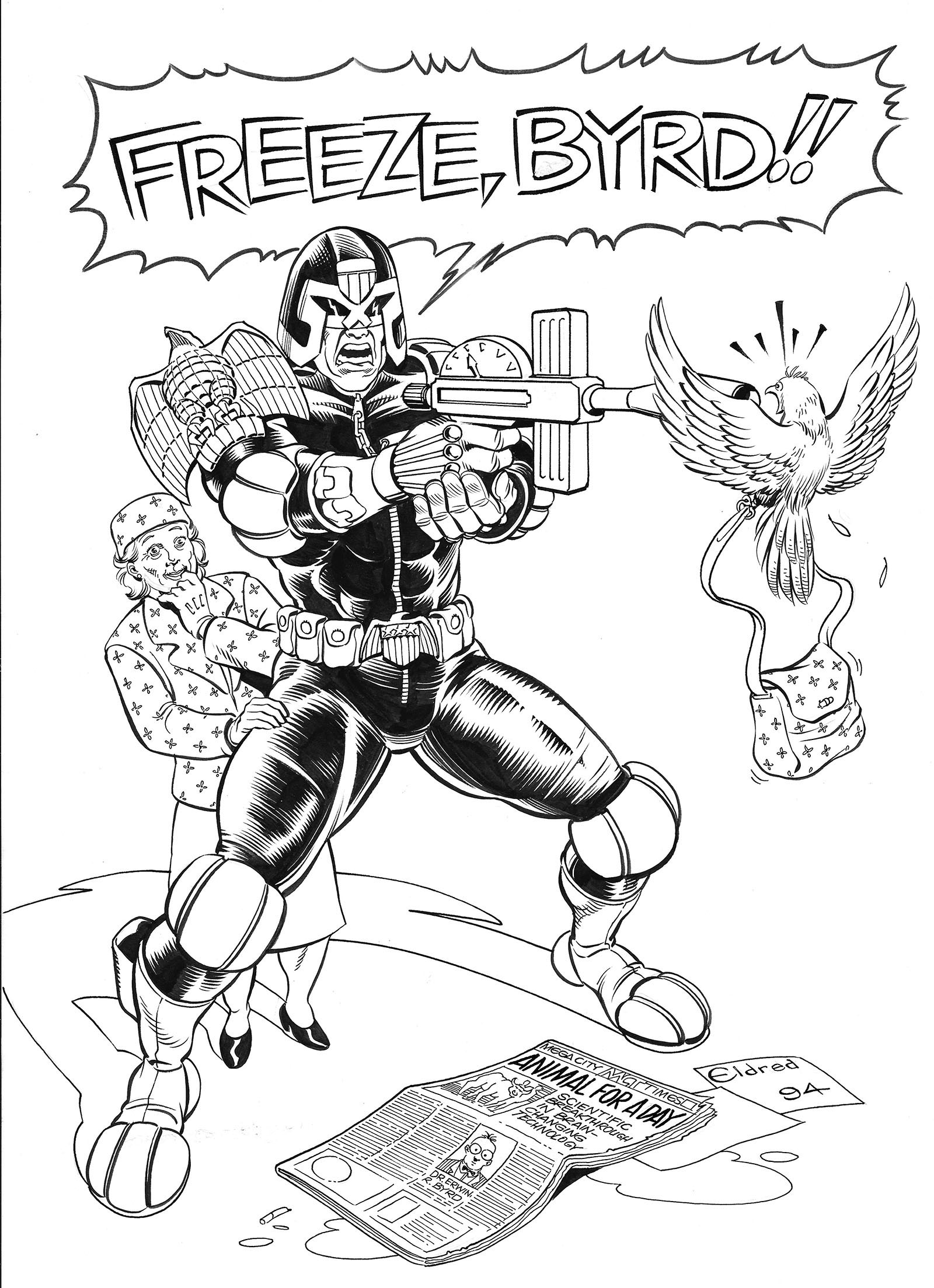 Ten years later I was still a fan and got the urge to draw Dredd again. This time it was only for my portfolio, since I was hunting for freelance work again after a couple years on staff at Malibu Comics. The goal was to tell a whole story in one image. The newspaper headline is the key. 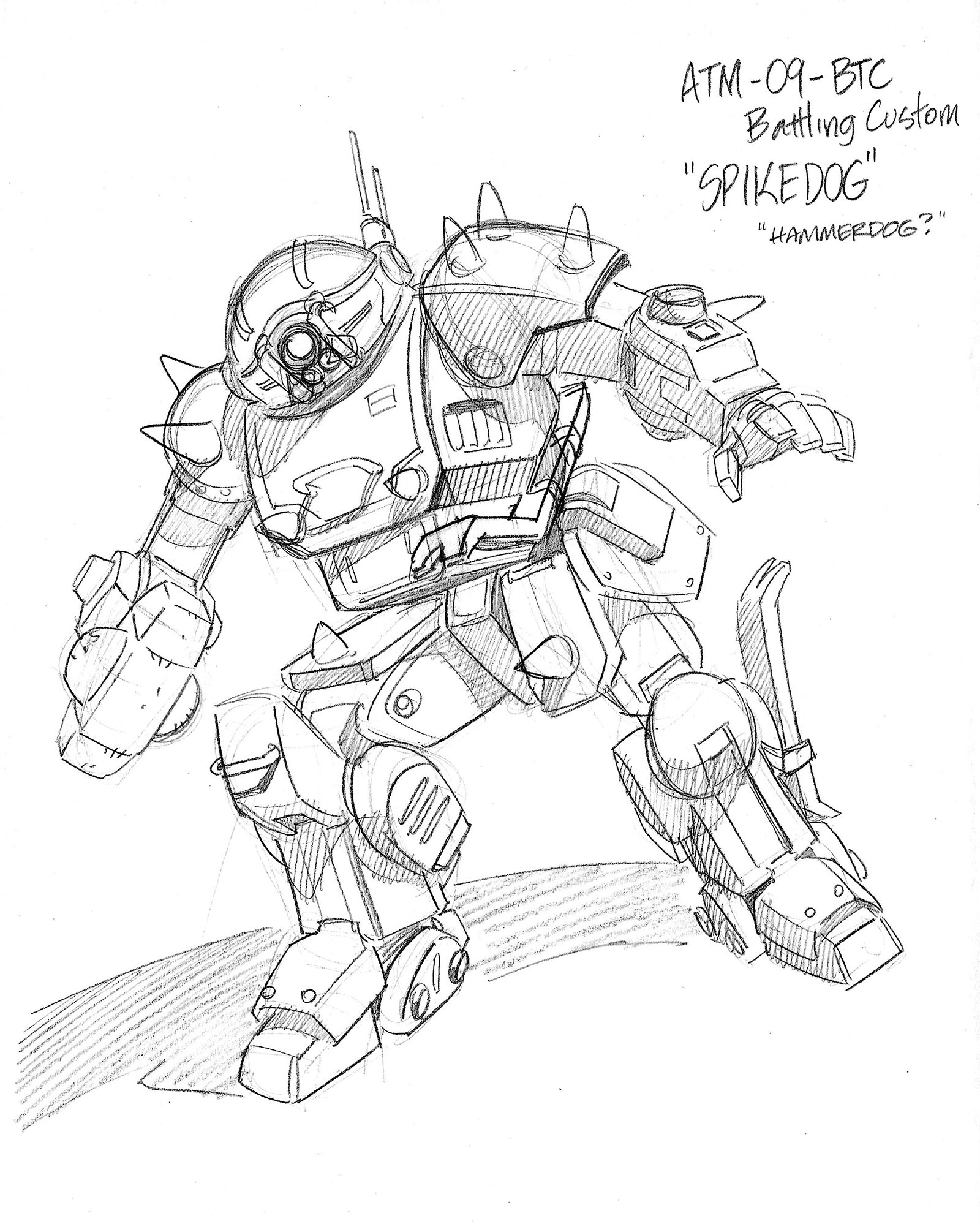 After 2000AD, anime from Japan was the next big lightning strike, especially a hardcore SF mecha series called Armored Trooper Votoms. (Don’t worry, fellow fans, Votoms articles are coming. LOTS of them.) One of the things that made it cool was a generic robot bodyframe that was highly customizable. One day I customized my own, daydreaming that by some miracle I’d eventually get to draw a Votoms comic book. (Spoiler warning: I did.) 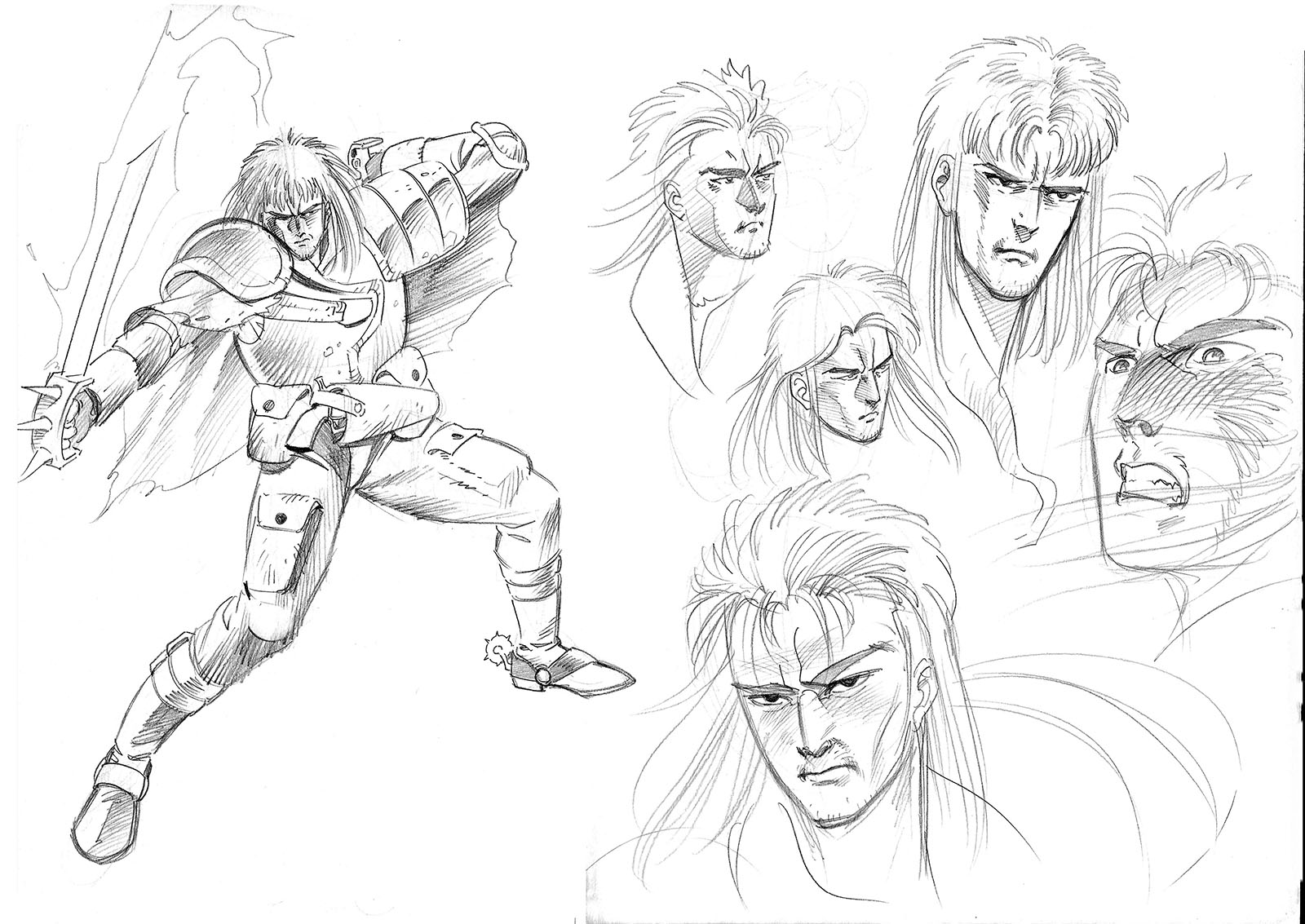 At the same time Malibu/Eternity was publishing my early comics, they also had a series titled White Devil with a strong anime/manga influence. It was a mature readers (adult) story written by R.A. Jones and drawn by Malcolm Hee (who I hadn’t heard of before). I liked the energy of Malcolm’s character design, so I played around with my own renderings. 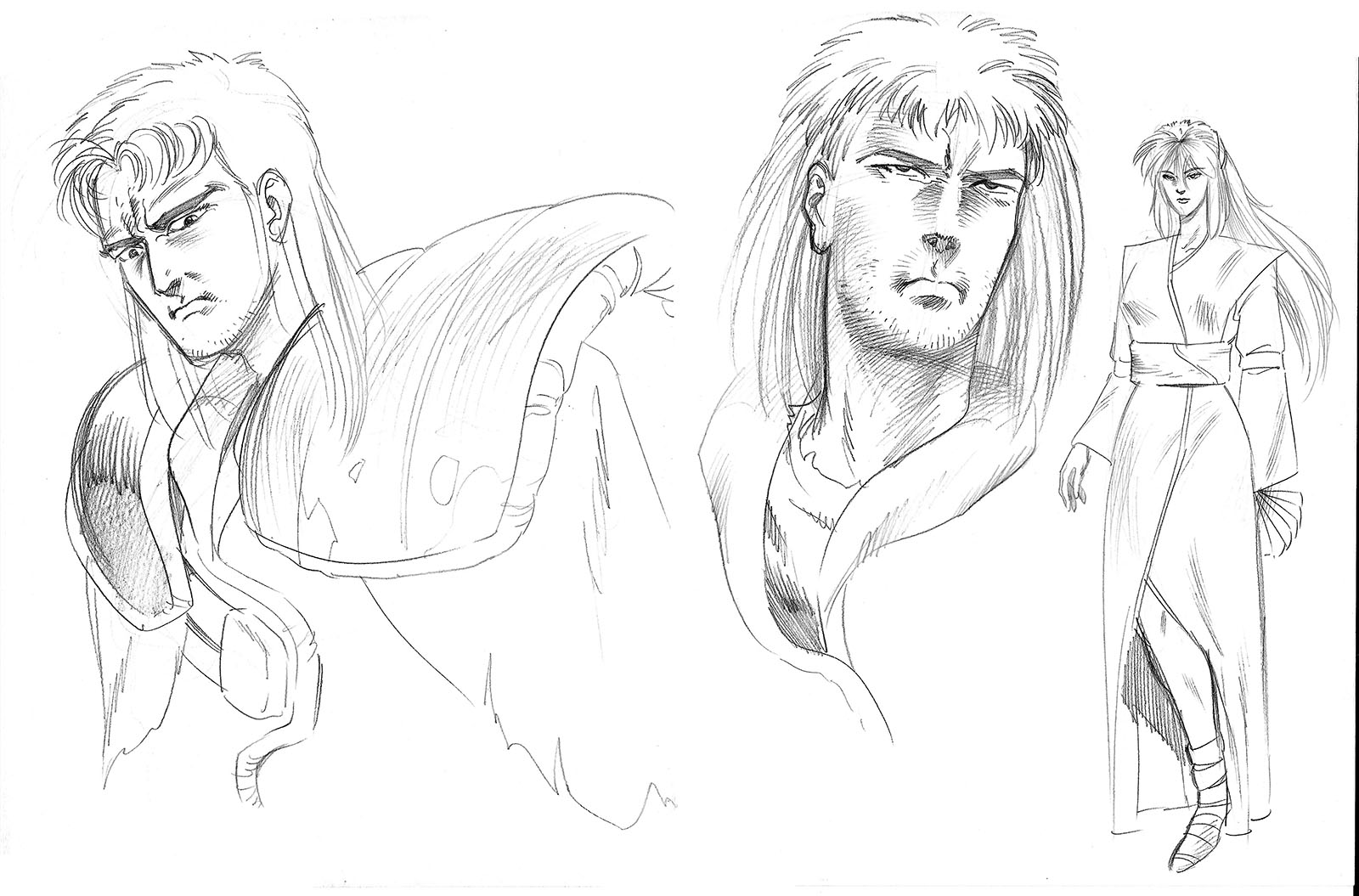 Maybe there was a tiny voice in the back of my head thinking I could sub in for an issue if Malcolm wanted a break, but White Devil ended with only six issues and vanished. See the covers here. 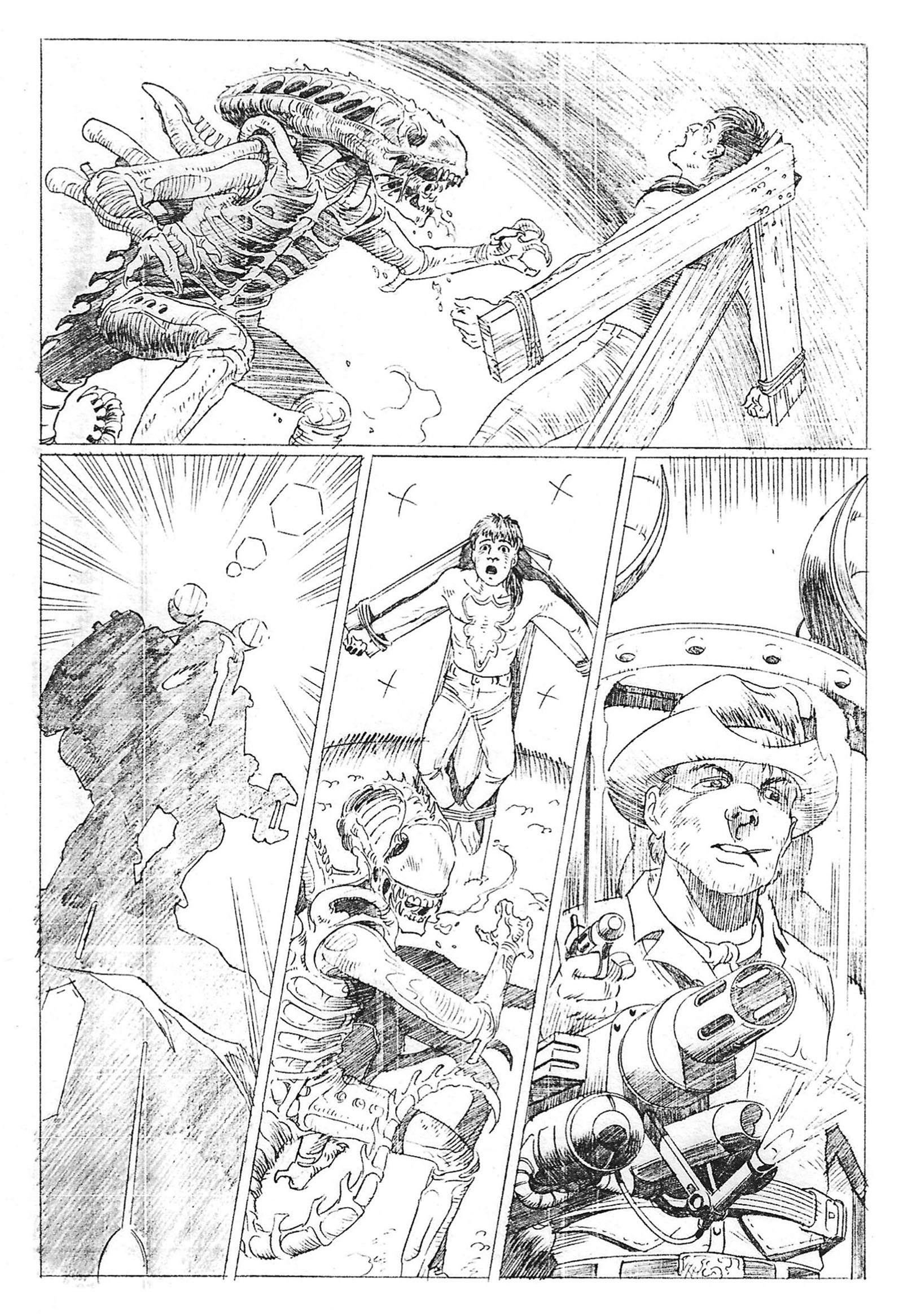 Dark Horse Comics gave me my first pro comics job (Mecha) in 1988, the same year they miraculously landed the license for Aliens. I followed it closely and really wanted to work for Dark Horse again, so I put a couple of penciled pages together. 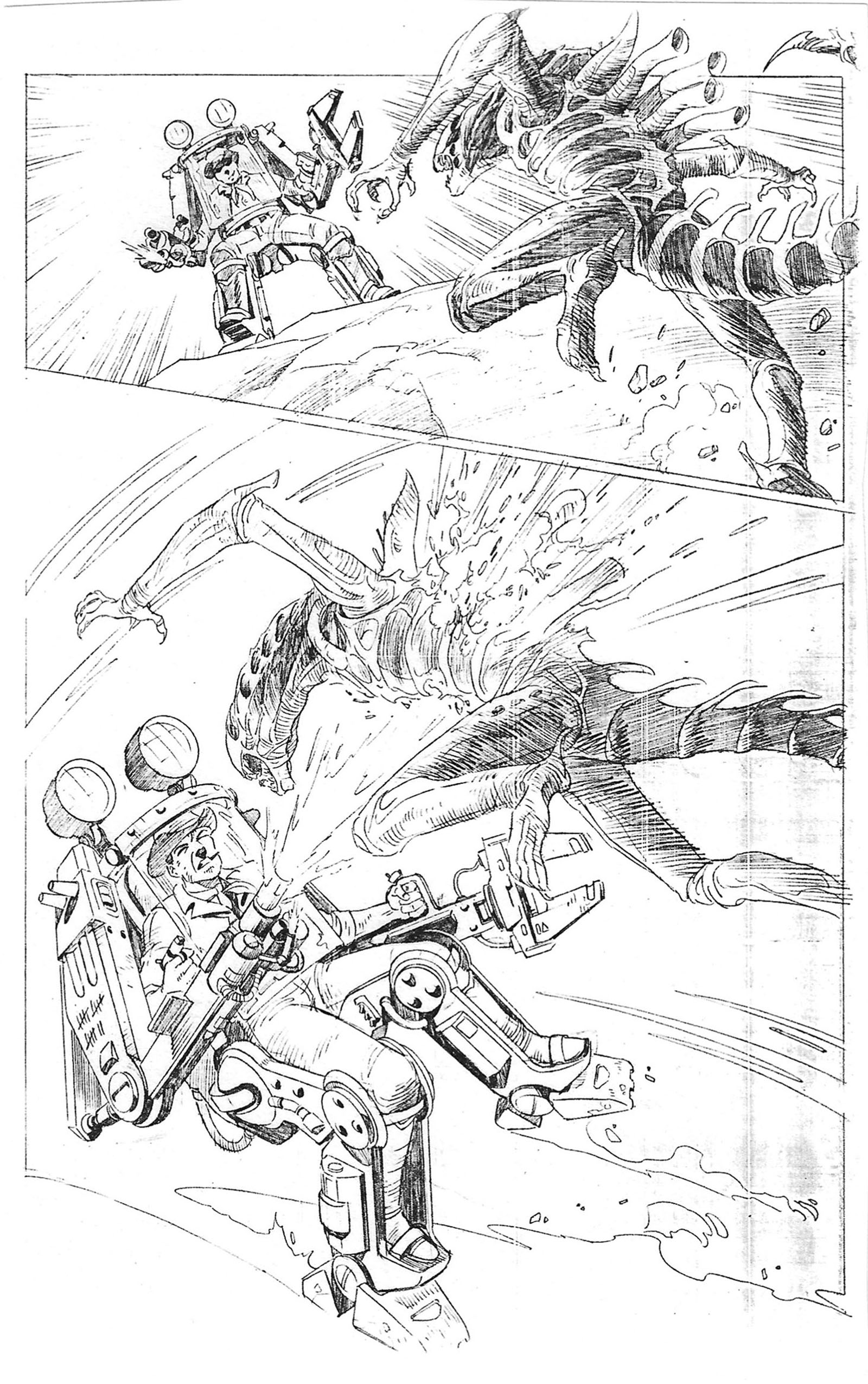 The idea was to make it a western; the xenomorphs made it to Earth and were being kept at bay by human sacrifices. But one rootin’ tootin’ buckaroo wasn’t puttin’ up with that hogwash. I’m pretty sure I sent this in and I’m absolutely sure it led to nothing. 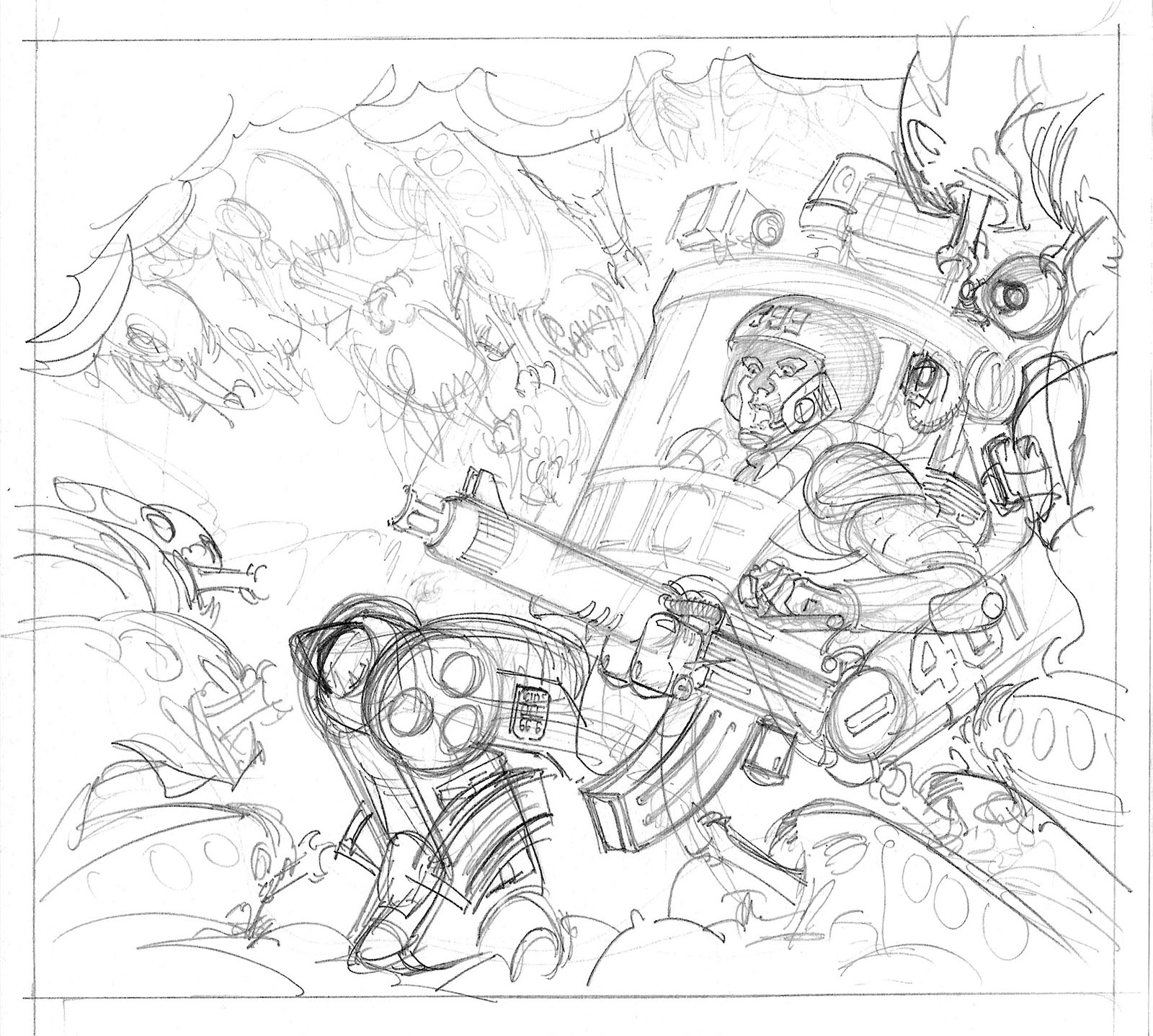 A couple years later I gave it another try, this time writing up a proposal for an Aliens comic called Deep Levels. 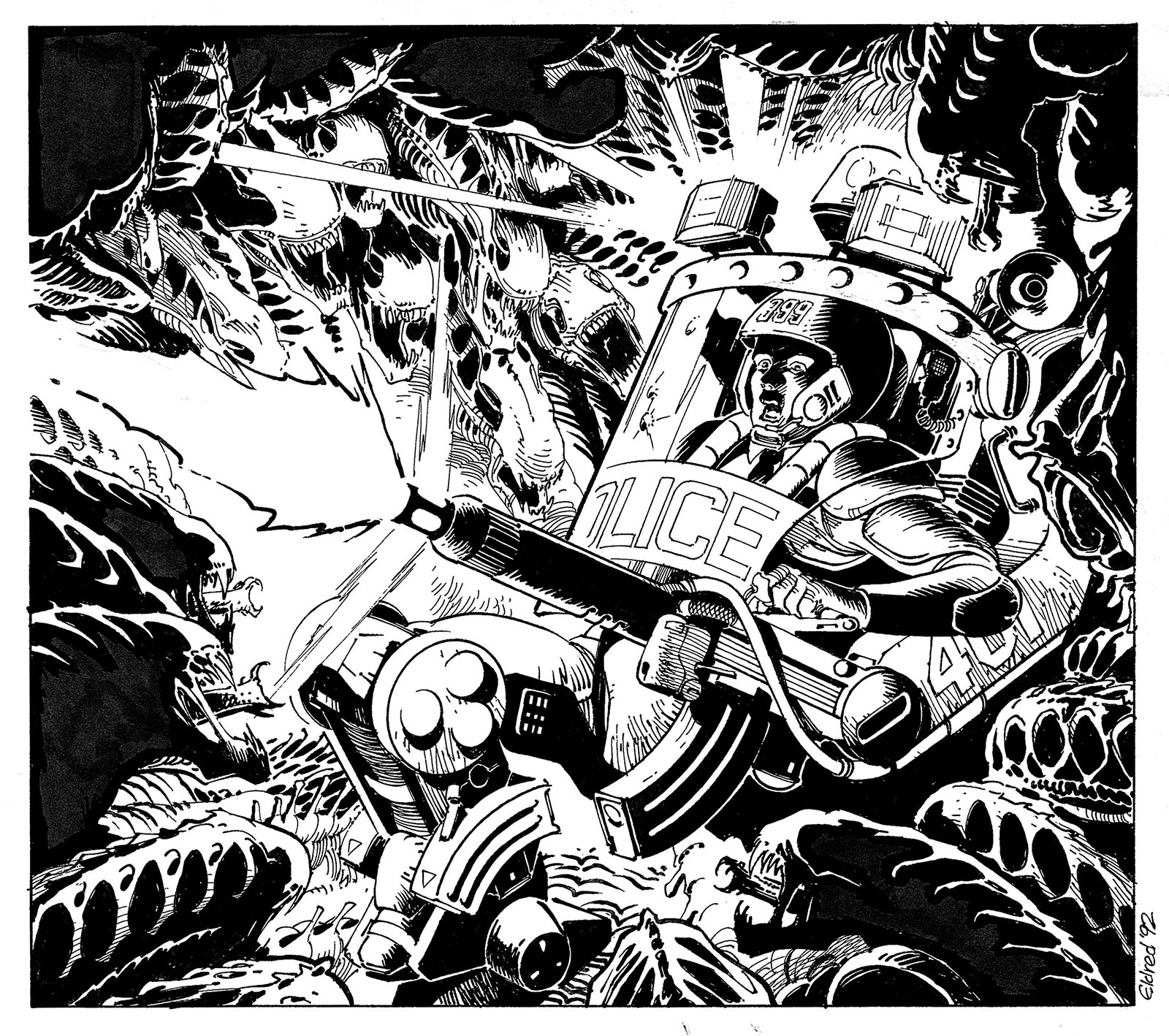 Keying off a real African diamond mine called Deep Levels, I thought it would be pretty hairy to have to work in a place where xenomorphs could grab you in the dark at any moment. The story was going to have some political layers to it with blood diamonds and apartheid. My editor contact at Dark Horse definitely got the proposal and definitely did not want it. 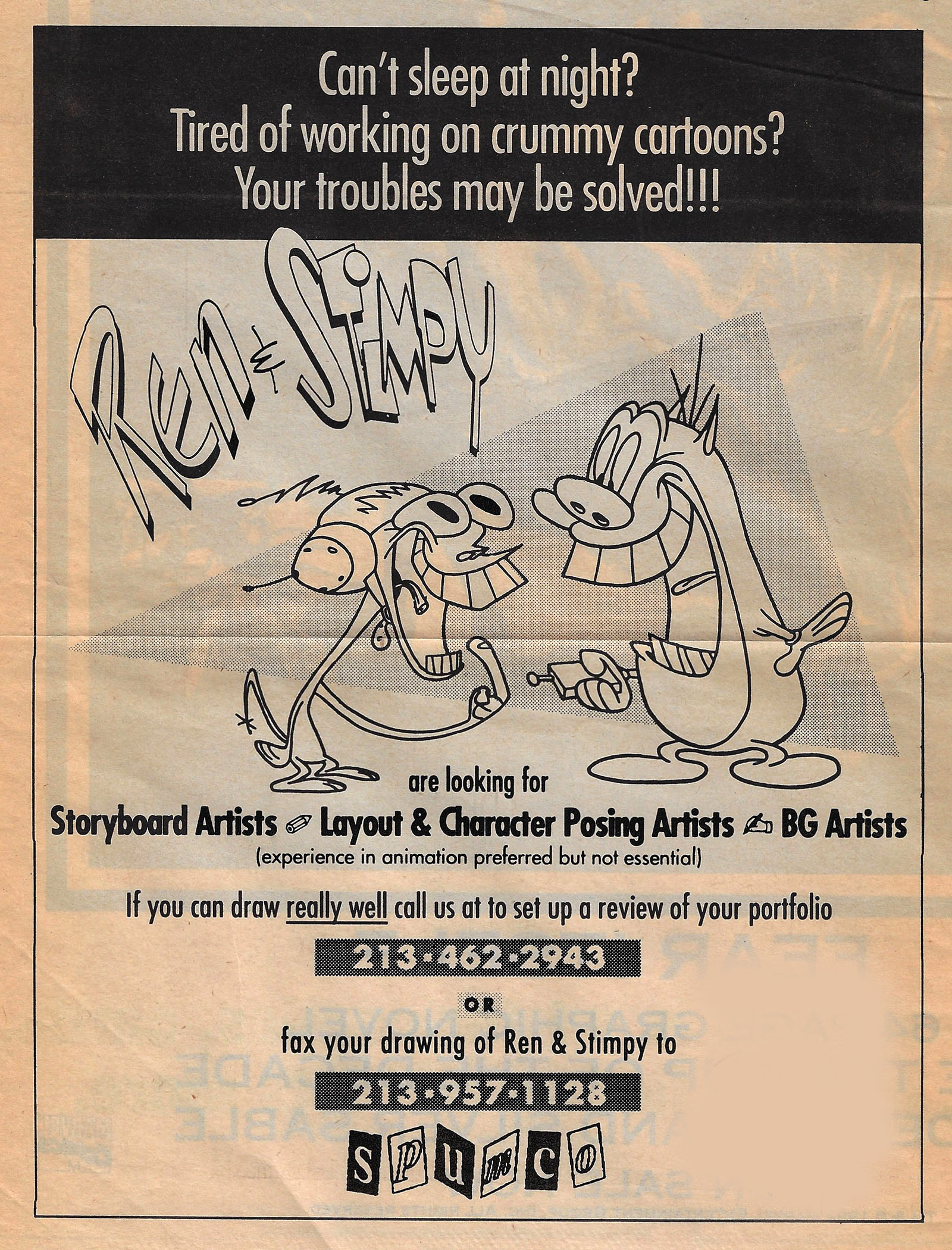 Like the rest of the cartoon-watching world, I was obsessed with Ren & Stimpy during its first season when it seemed like our own TVs were rebelling against everything normal. One day, this ad appeared in a weekly comics newspaper called The Comics Buyer’s Guide and it was a revelation. An animation studio in Hollywood was putting out a call for artists? ONE SIDE, PEOPLE! 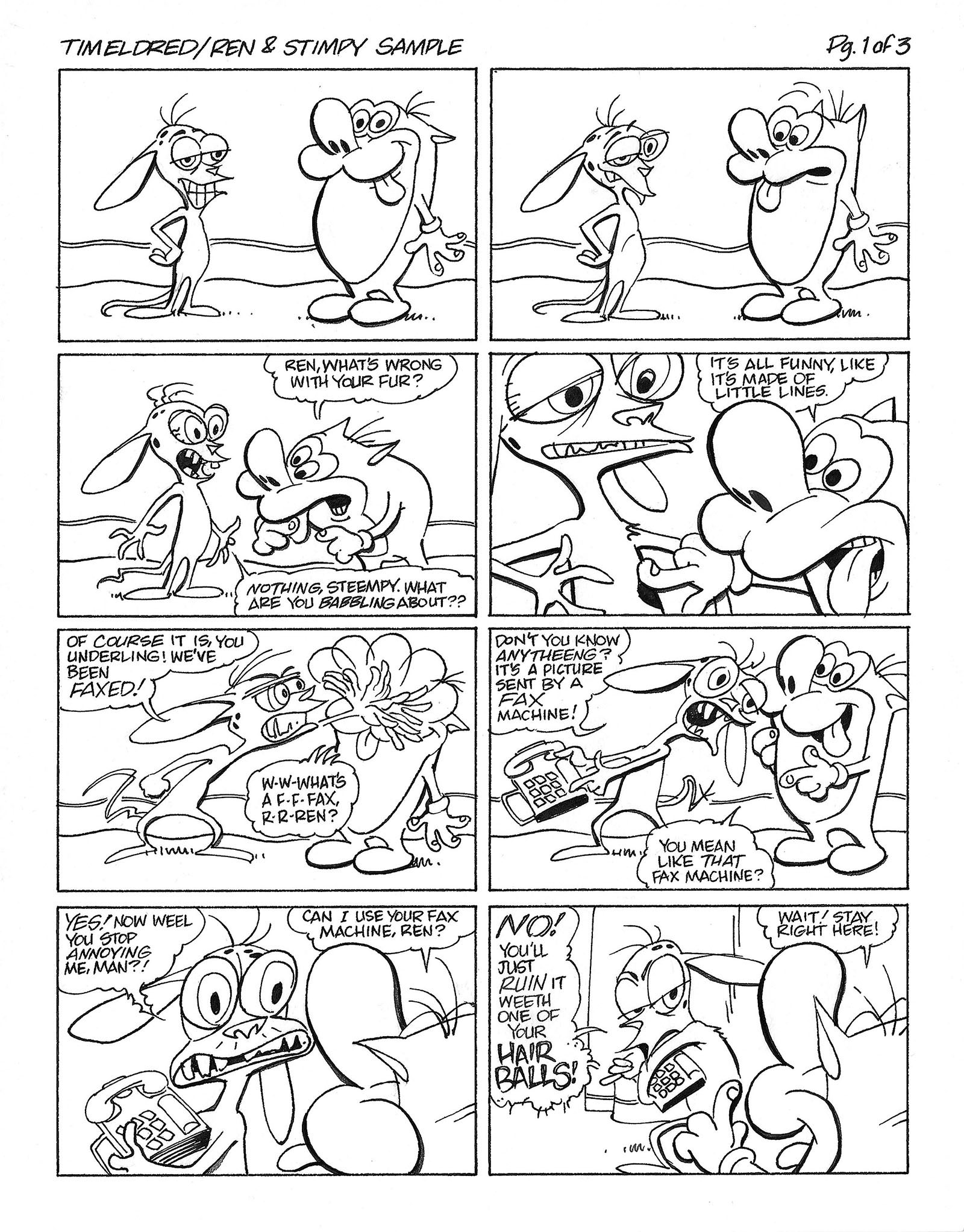 To set this up properly, I have to tell you that the fastest means of sending images to someone back then was a thing we called a FAX machine. It was THE FUTURE, and we were seeing it with our OWN EYES. Of course, the transmitted image wasn’t perfect. Lower-quality fax machines would pixellate it pretty badly. Since I would be faxing my sample to Spumco Studio, I thought I could zing them with a fax joke at the same time. 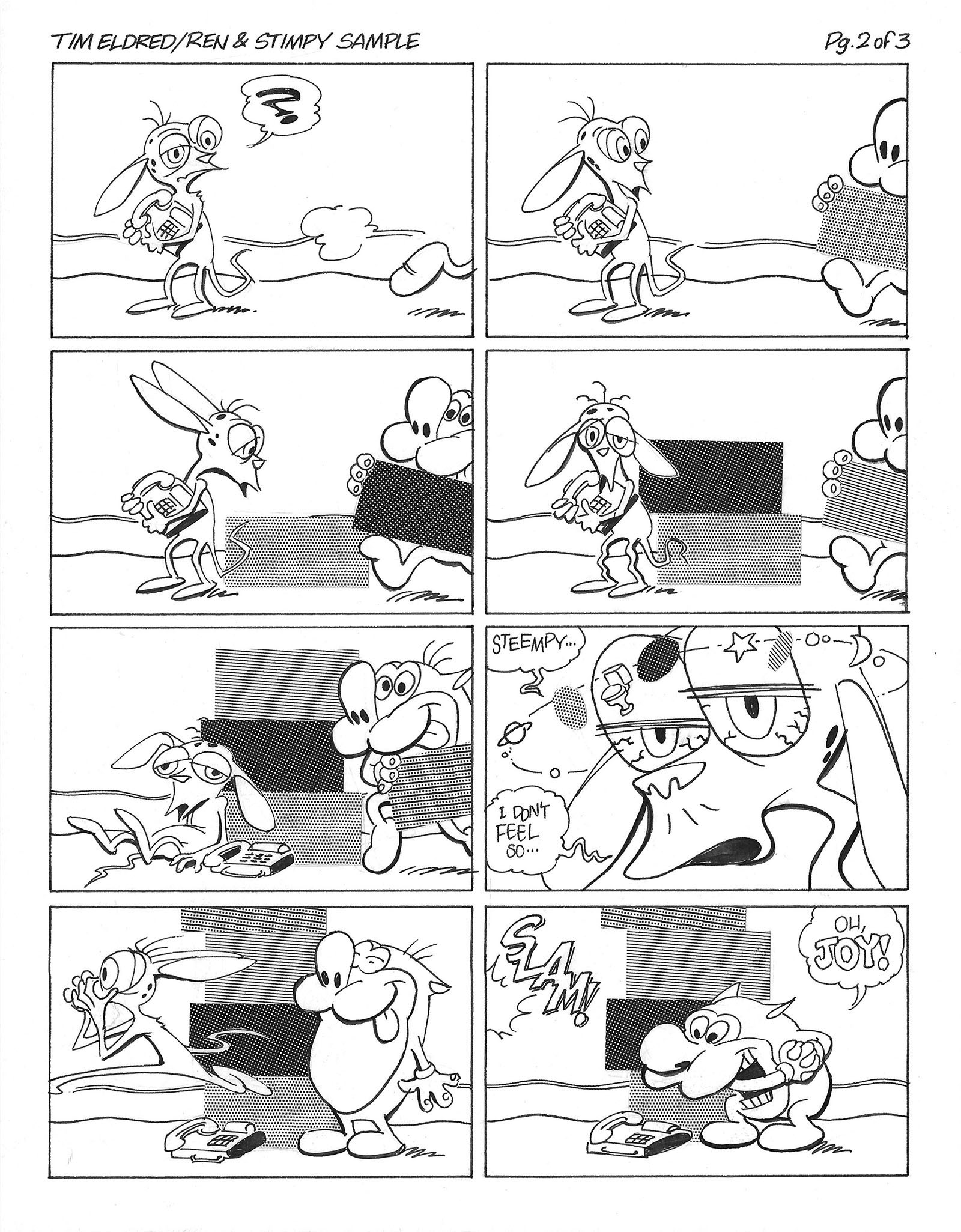 Stimpy brings in blocks of screen tone (a shading film we used in comics at the time) and piles them up. I expected that a faxed version of this would turn the dots into crazy moiree patterns, and these would make Ren nausated. With Ren out of the way, Stimpy could try out the magic fax technology for himself. 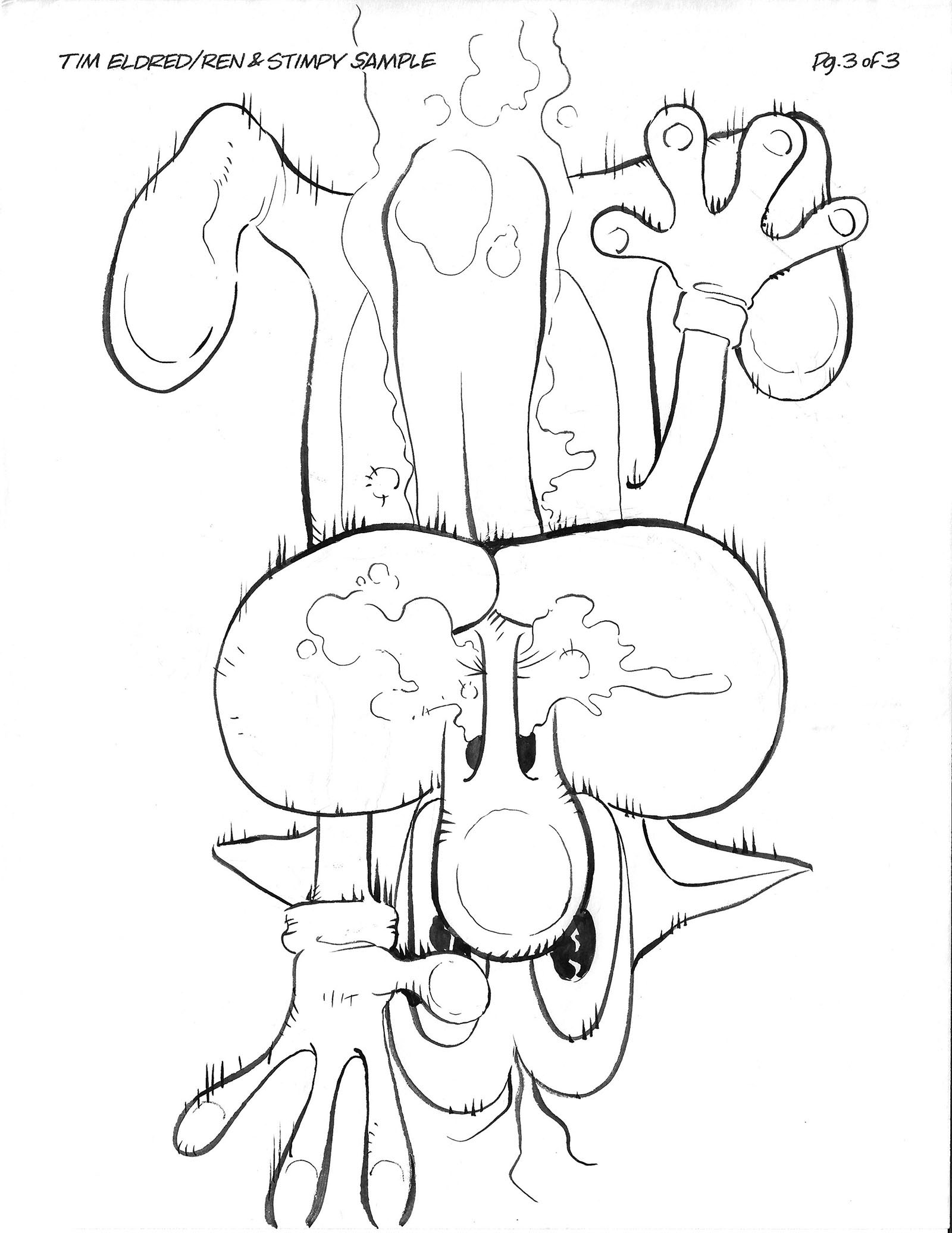 I like to imagine someone watching this third page roll out of their fax machine. They would be the only person to see the joke in real time. (P.S. I heard nothing back from Spumco.) 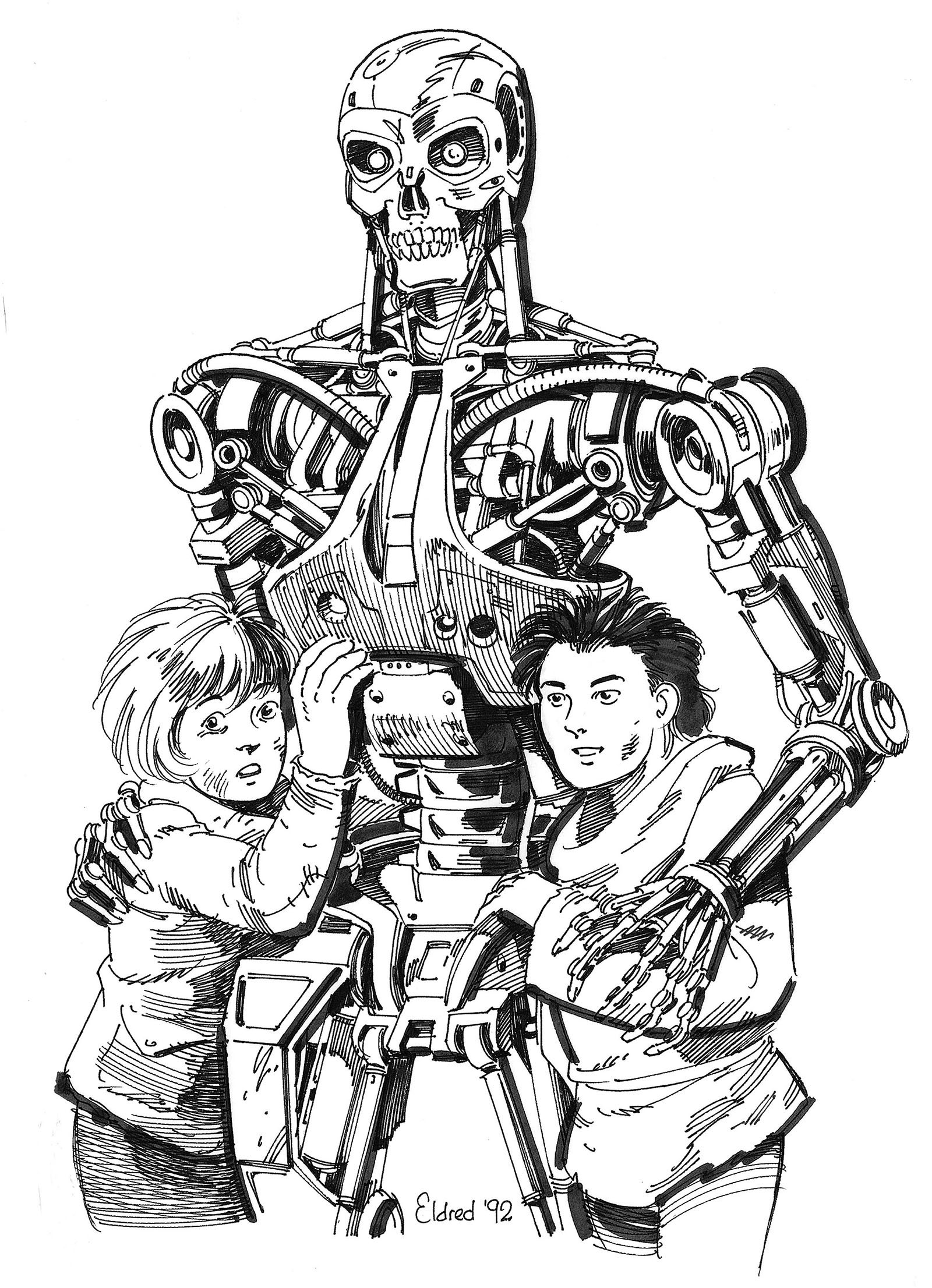 Another attempt to crack Dark Horse. They landed the Terminator license and started publishing comics in 1990. One day in 1992 I got an idea for one. It would be set in the apocalyptic future with humans struggling under Skynet. They would figure out how to reprogram terminators to serve humans, but they’d have to leave them de-skinned so they would always be recognizable. The image of children huddled against benevolent terminators like guard dogs seemed really intriguing to me.

But not to Dark Horse, of course. I don’t remember getting any response to this one. 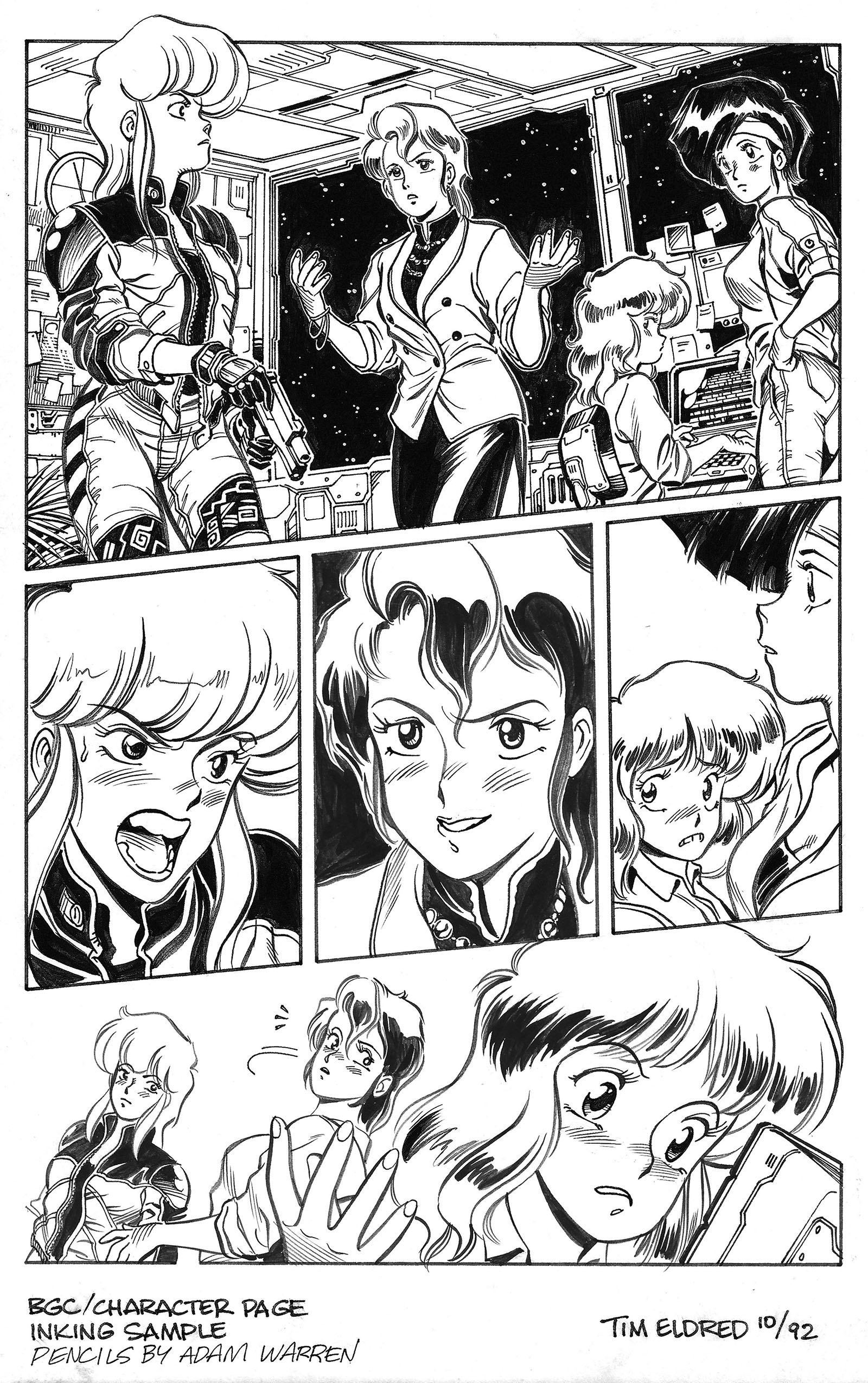 Another method of cracking the Dark Horse nut was to ride in on another project. I was casually acquainted with Adam Warren at the time, and learned that he’d been hired to create a comic based on the SF cyberpunk anime series Bubblegum Crisis. I wasn’t a huge fan, but I knew all about it and got a chance to try out as his inker. 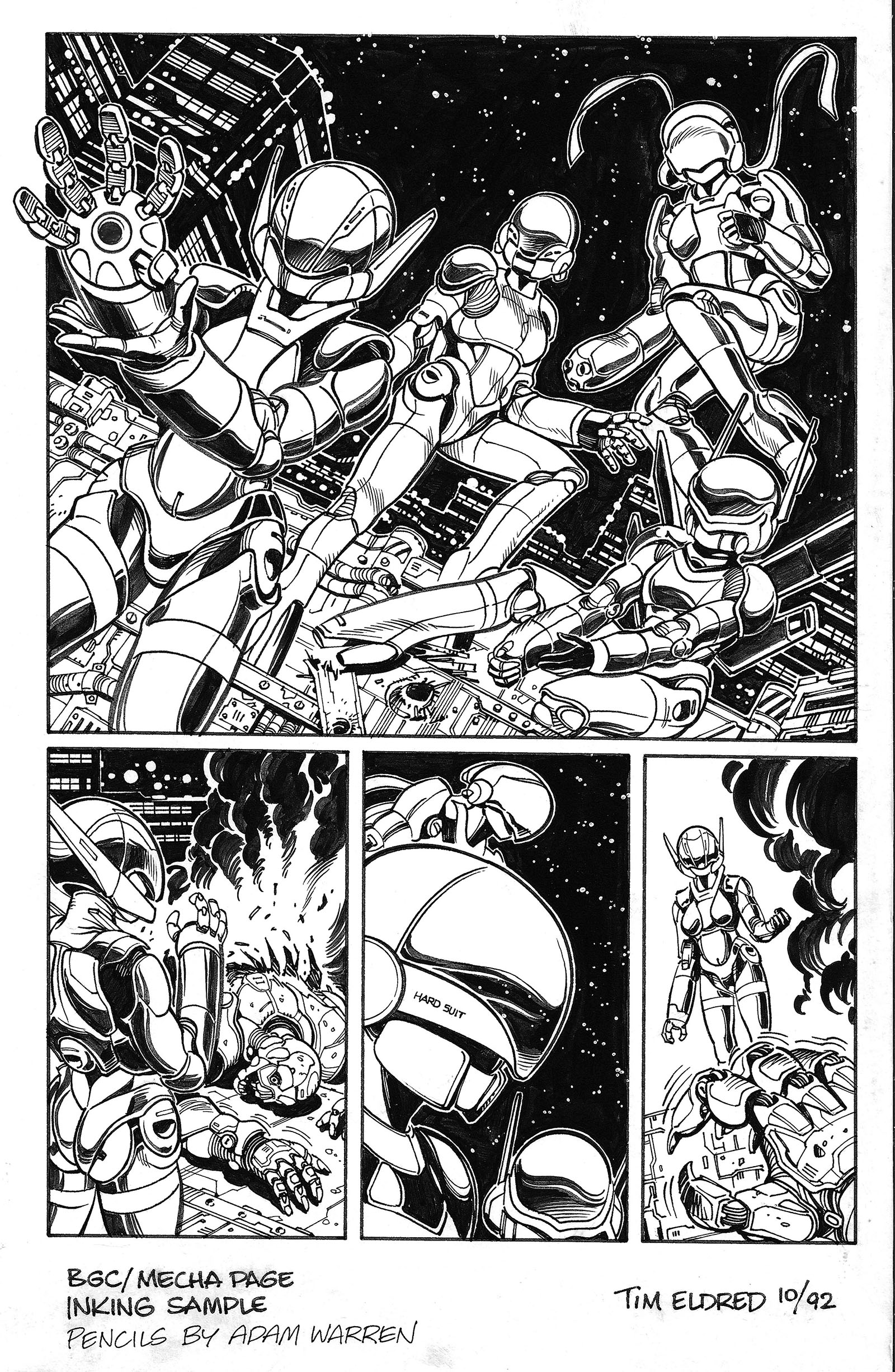 I heard later that these two pages went to a LOT of prospective inkers, and the one Adam ultimately went with was Robert DeJesus, an excellent choice. The comic itself took a while to appear, later being published as a 4-issue miniseries in 1994. 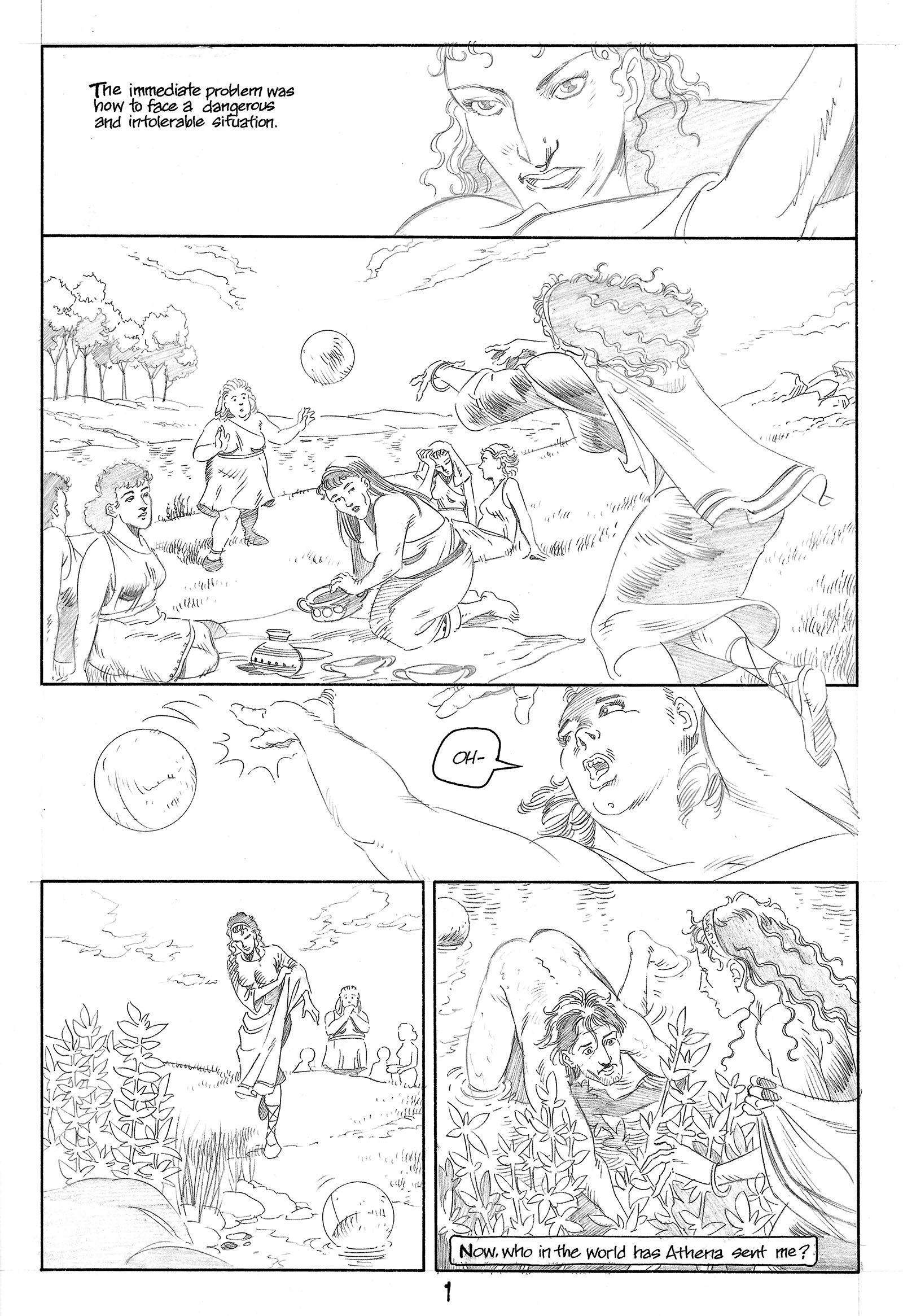 I bet this is the last thing you expected to see here. It was the idea of my then-wife to pitch an adaptation of a 1955 book by Robert Graves. In this classic, a Sicilian princess of the eighth century B.C. named Nausicaa looks back on the events of her life and tells how she came to write the epic poem known as The Odyssey. (More info here) 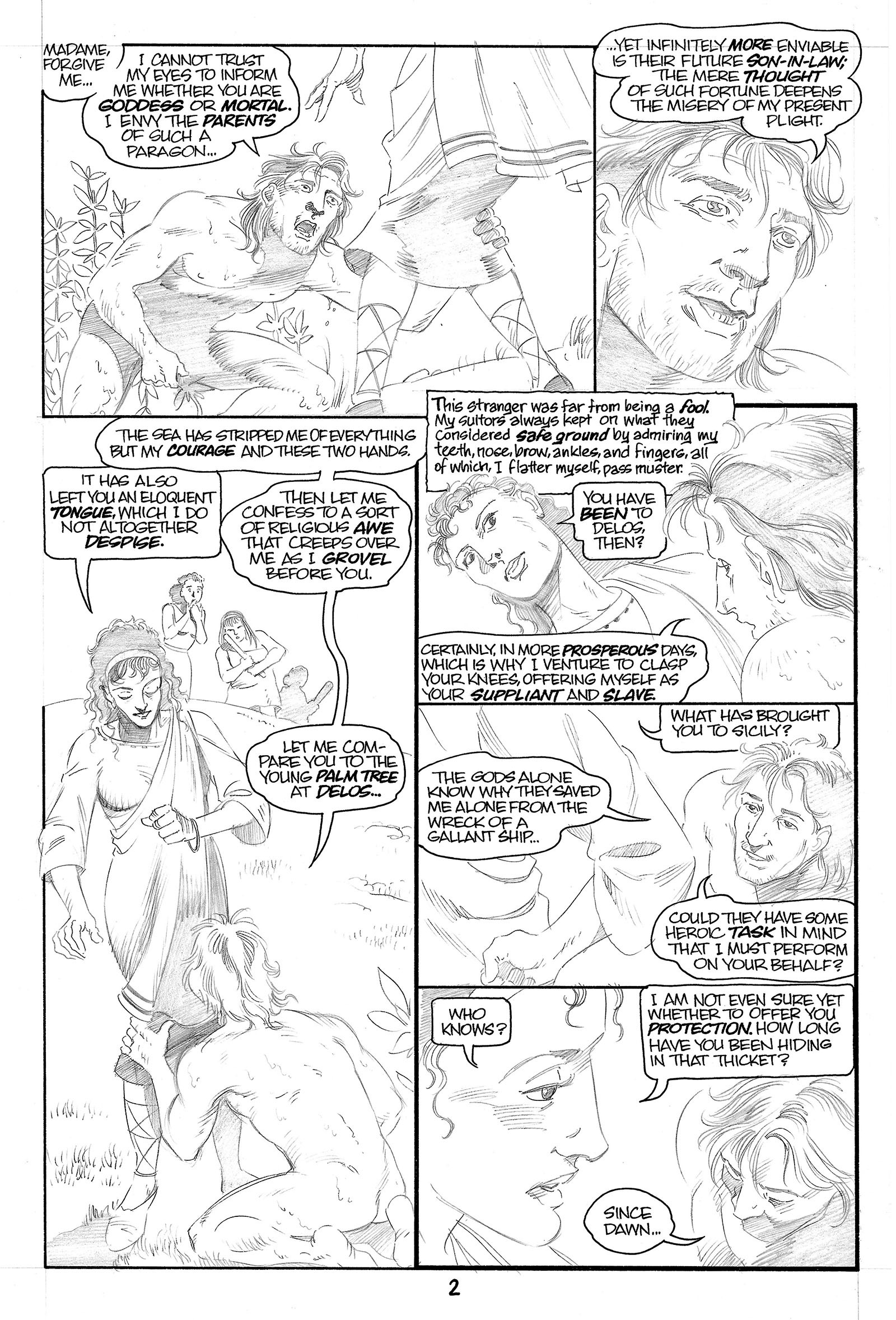 As you can imagine, Homer’s Daughter was a progressive story with a strong female lead. I didn’t know anything about Homer or The Odyssey then, but I liked that a famous anime character was named after this princess. So we picked a passage from the book and I drew this 3-page sample. I’d never drawn a period piece before, so I found what reference I could use and dove in. 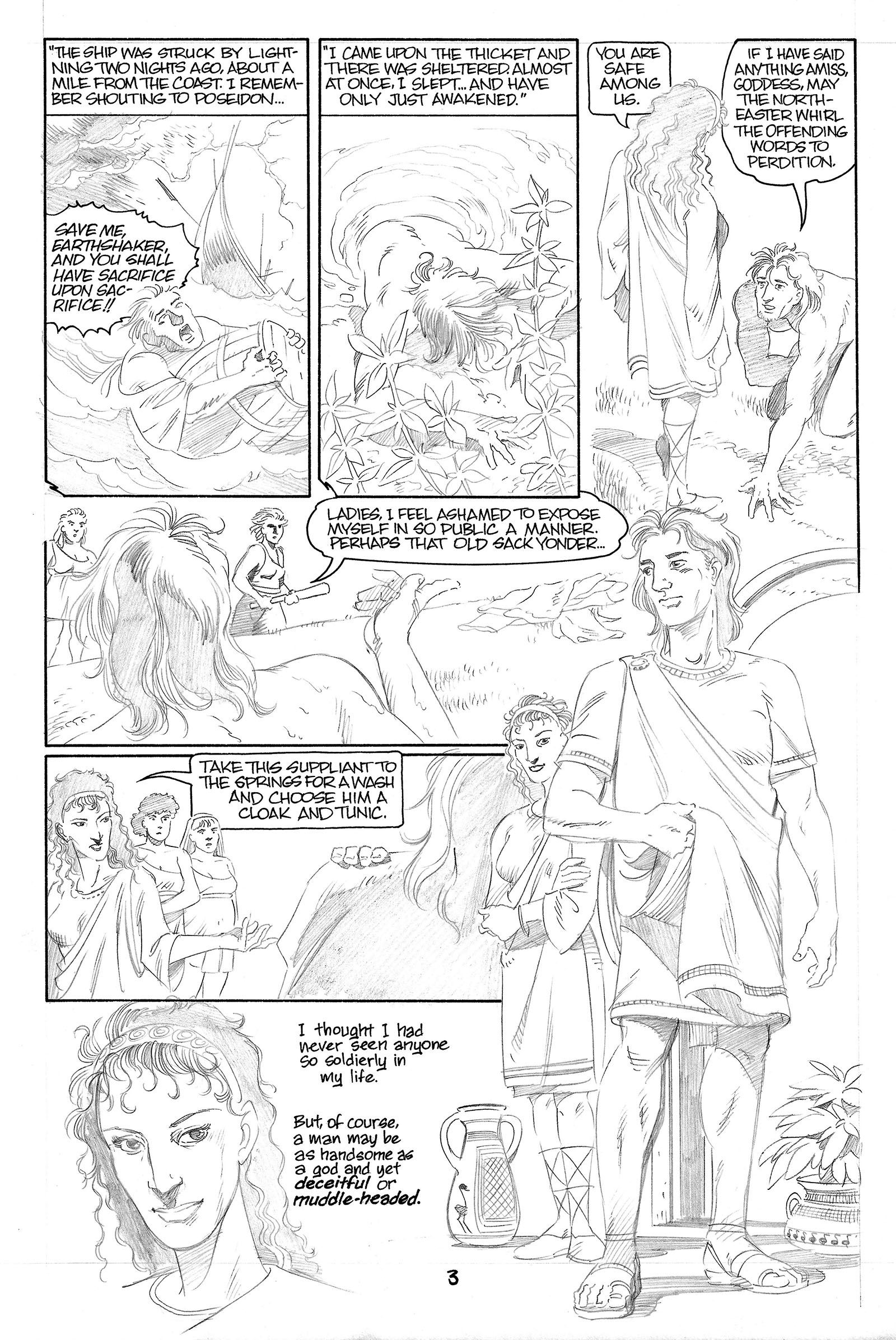 Back in ’92 there was just one eclectic publisher named Eclipse we thought might be interested in this, and I pitched it to the editor at that summer’s Chicago Comic Con. She seemed impressed that anyone would attempt this, but she didn’t see a market for it. It feels to me like the market has broadened enough to accommodate it now, but it will have to come from someone else. 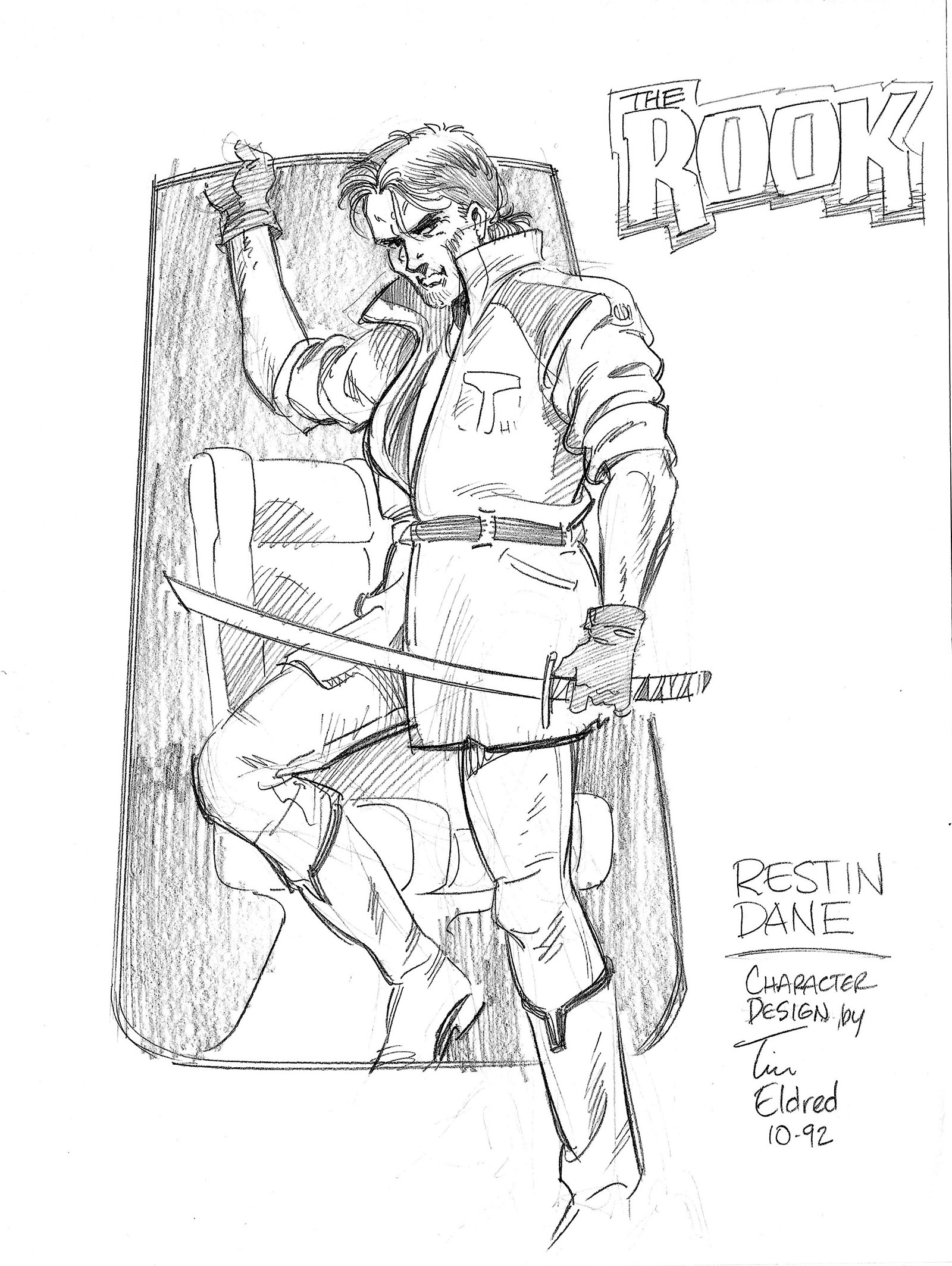 Another publisher from the early 90s was Harris, a magazine company. Most if not all of their comic titles were acquired from Warren Publishing: Creepy, Eerie, Vampirella, etc. To me they felt like the comic book equivalent of Hammer horror films. One of their characters (from the pages of Eerie) was a time-traveling adventurer called The Rook. 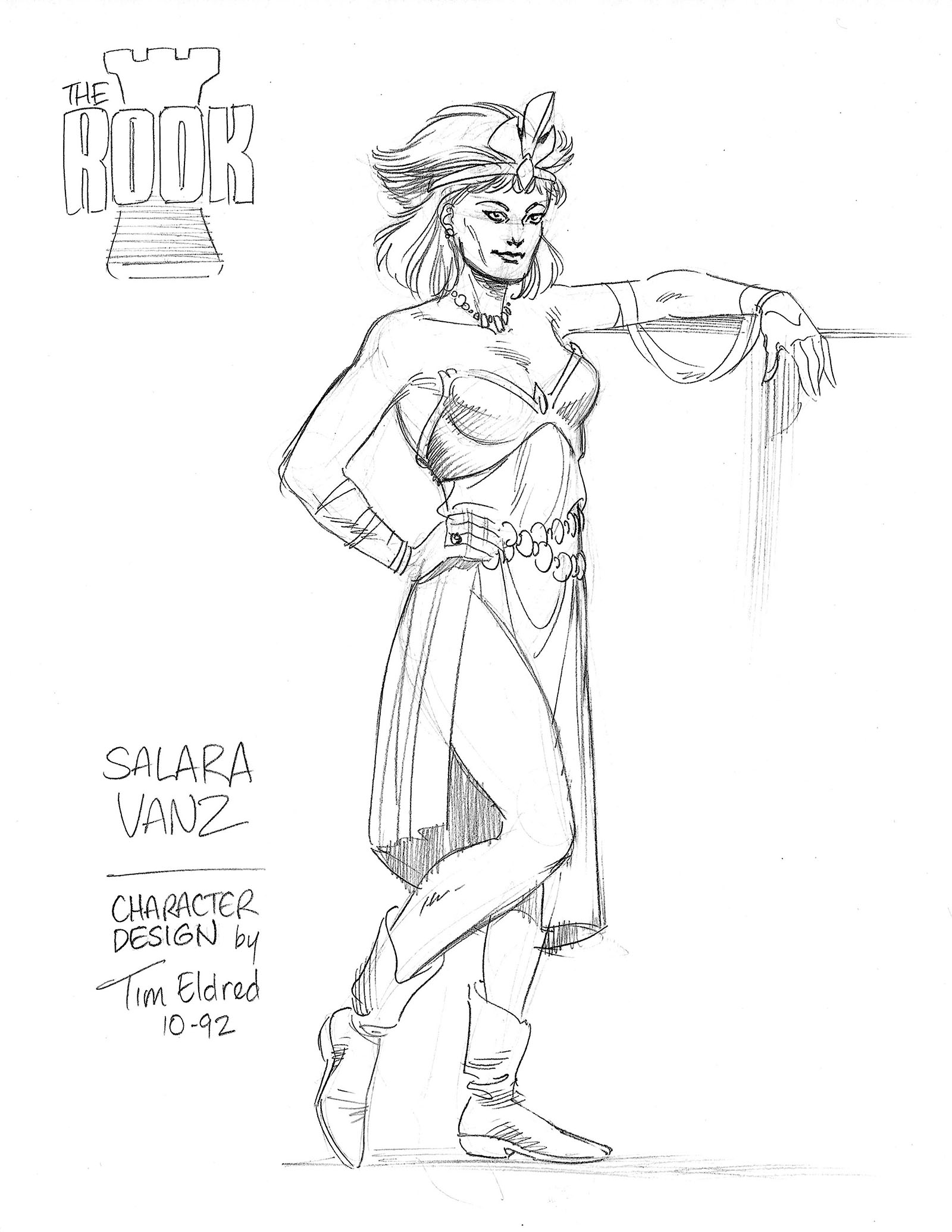 A couple writers I knew were keen to pitch Harris on ideas to revive this character. I’d never heard of him, but I was always on the lookout for a new project in case my Malibu assignments petered out. 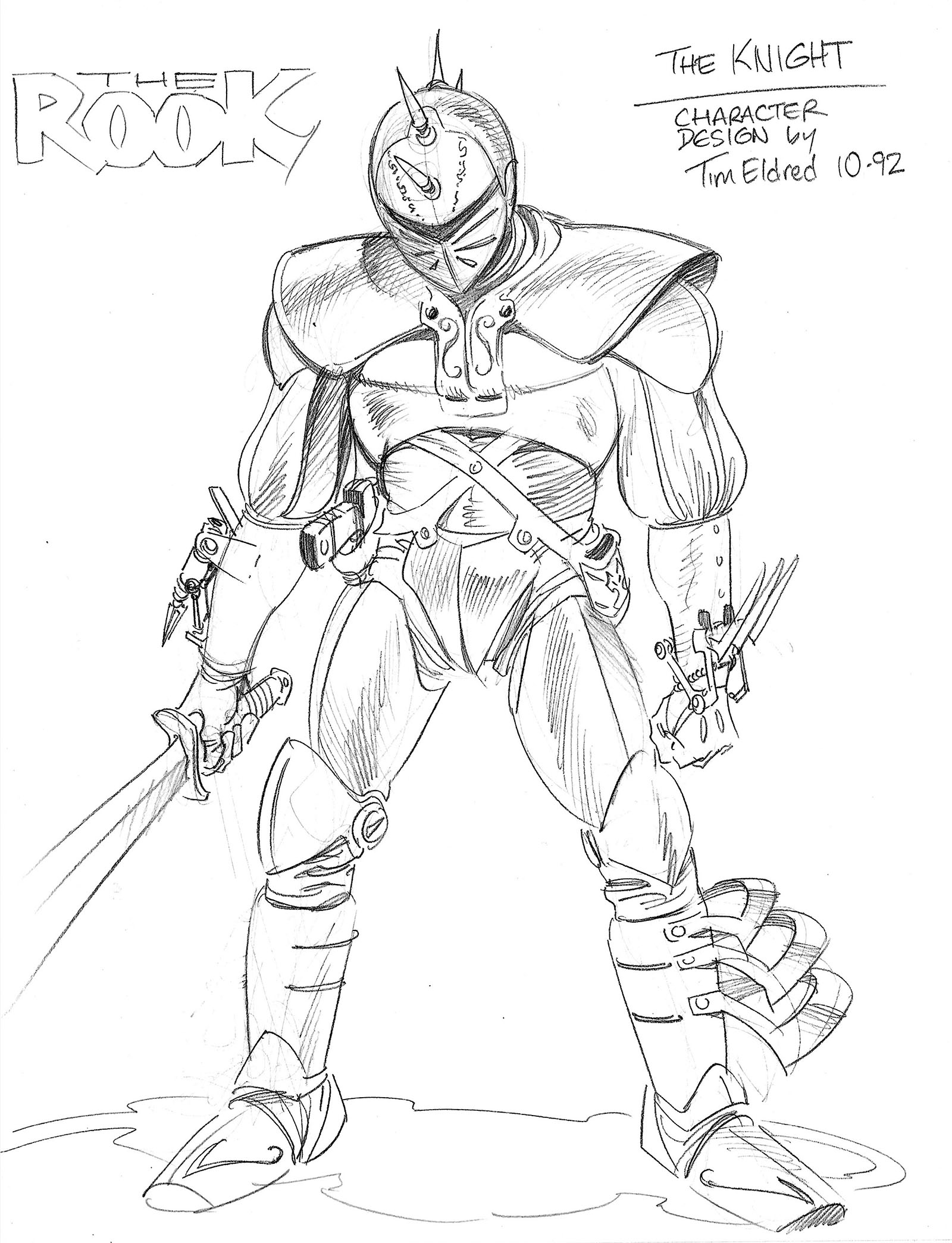 Based on some comics I was sent, I redesigned three characters in my own way to accompany the writing pitch. A Rook comic did appear in 1995, but as you probably guessed already, I had nothing to do with it. I still like these drawings, though. Even if exercises like this are a dead end work-wise, it’s never a dead end to extend your range. 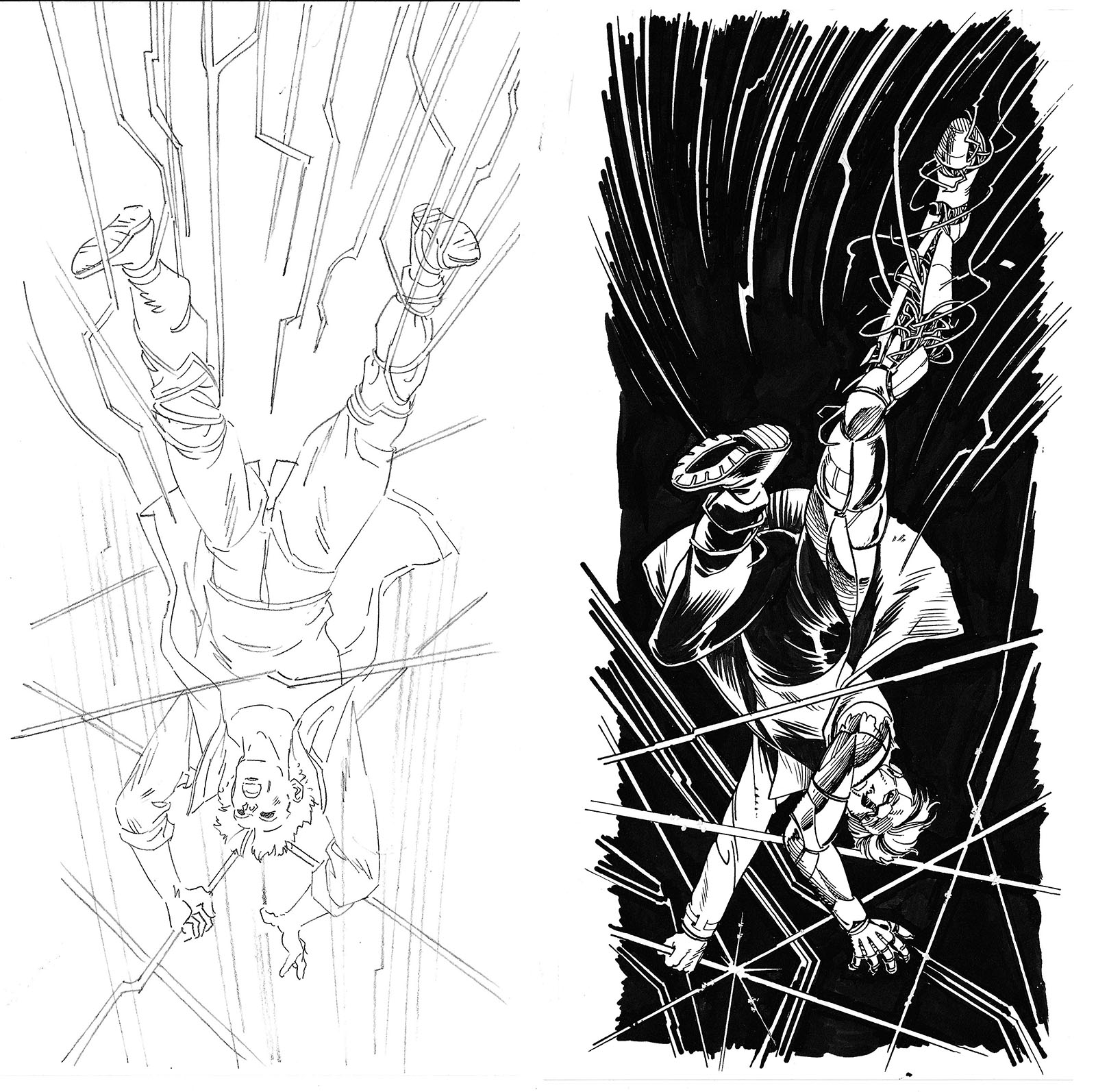 Six years before The Matrix, a writer named E. Jordan Bojar created something pretty much like The Matrix. He was the editor of a really cool 1991 comic called Oz Squad, published by a small company named Brave New Words. I sent him samples of my art to see if I could get involved, but an opportunity did not come up.

However, Jordan kept me in mind and later asked me to illustrate a proposal for a miniseries he wanted to pitch to another publisher. It was a cyber-fugitive story called Terminal. As far as I know, nothing ever happened with it, but Google tells me Jordan went on to become a game writer, so good for him. 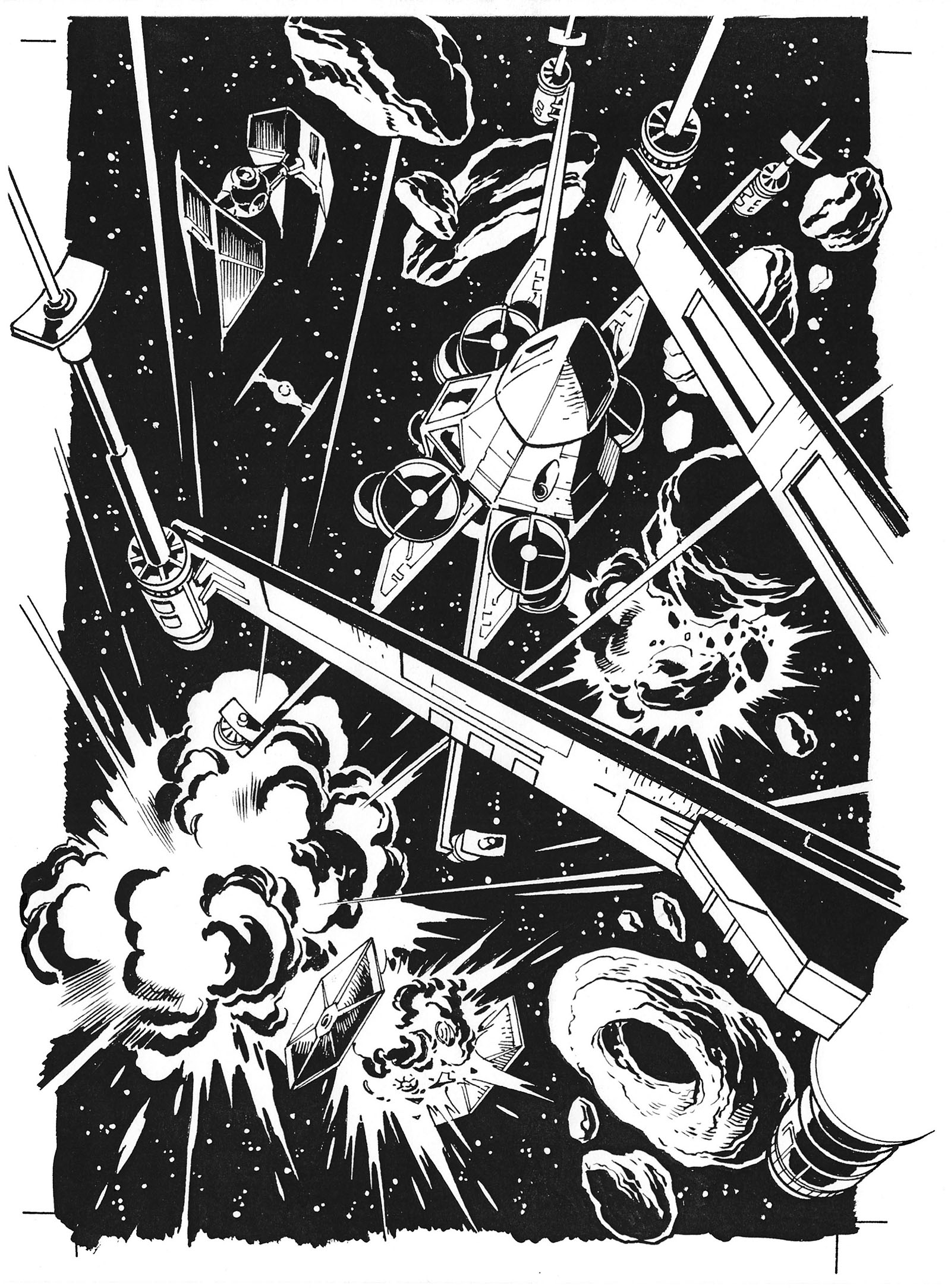 Sigh. Okay, ONE MORE round with Dark Horse. In 1991, they blew past all expectations when they landed one of the biggest comic book licenses of all: Star Wars. By this time, I’d done a bunch of Star Wars work for West End Games and thought about making a renewed push to break through that iron door. When they announced a series titled X-Wing Rogue Squadron, I had to give it just one more try. X-Wings were my jam, man. But once again, there was a brick wall where I thought a door could be.

My VERY last attempt came around 2012 when my Grease Monkey contract with Tor Books expired, and I offered reprint rights to Dark Horse for FREE. When I couldn’t even catch their interest with that, I knew it was time to quit. 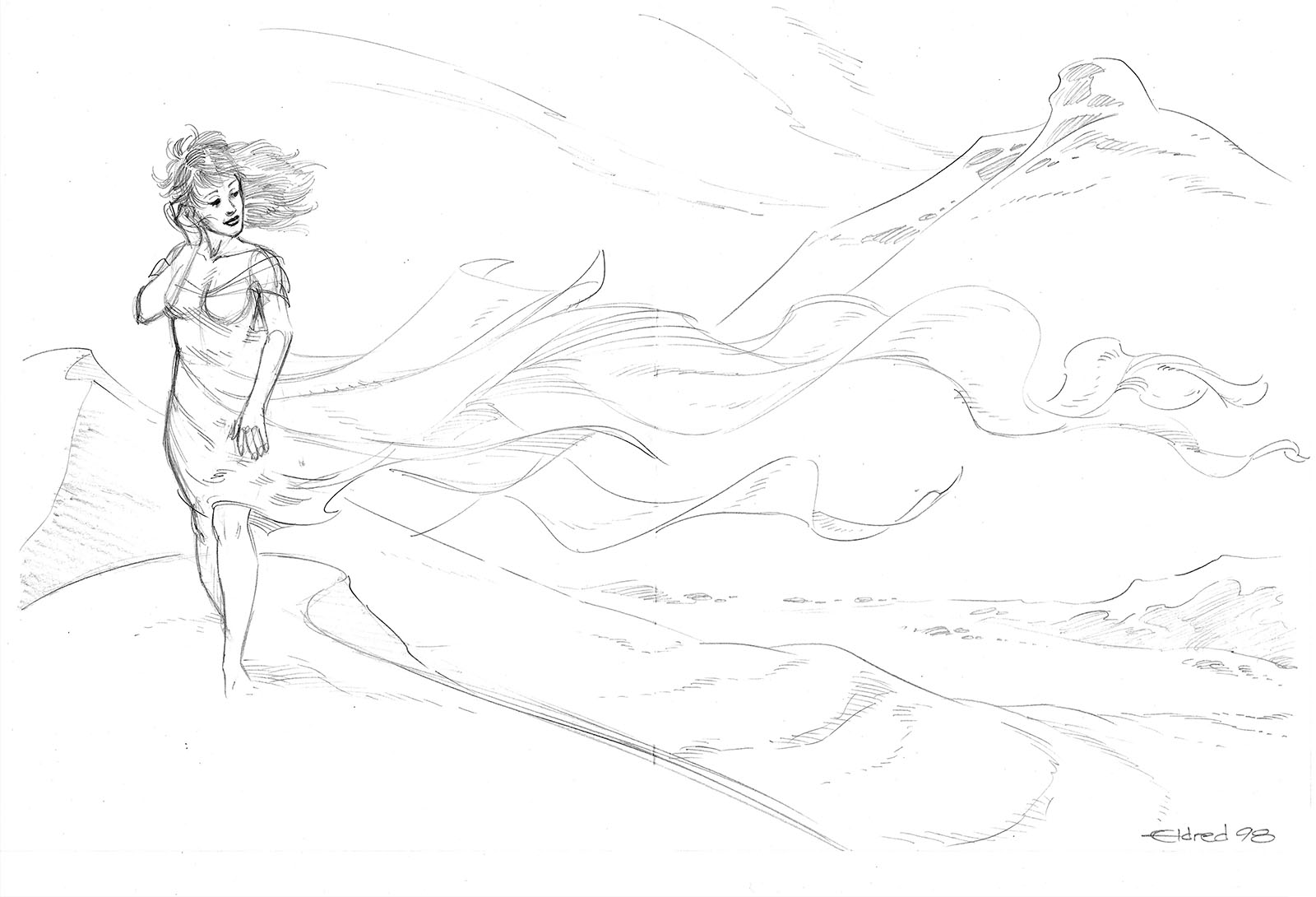 The last one in this collection is the most personal. A portrait of a woman I was with for a while in 1998. The kind you never forget.