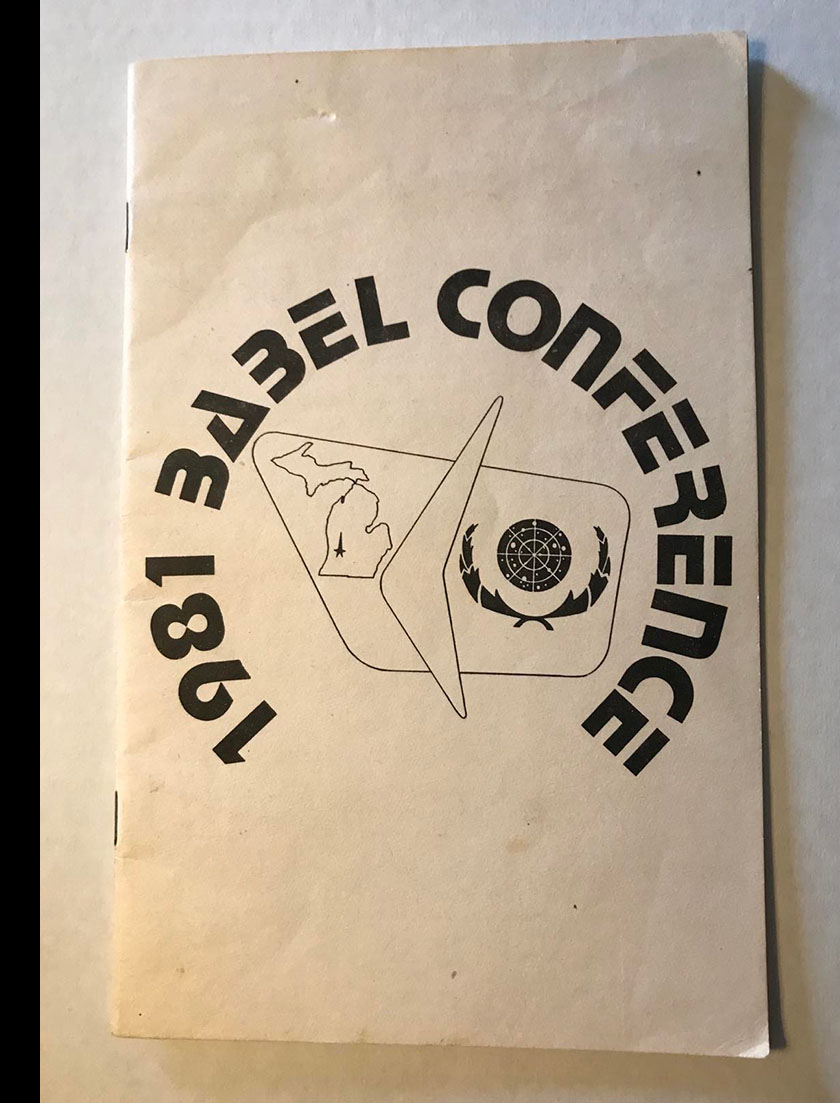 For anyone who’s keeping score, my years of making “kid comics” breaks down into three phases. Phase 1 was me totally on my own, mostly drawing on lined notebook paper. Phase 2 began after I got some professional tutoring in fall 1980 and upgraded to better paper and techniques. Phase 3 began a year later. Get comfortable, because I got some ‘splainin to do.

When fall 1981 came around, 16-year-old Tim started 11th grade and a whole new educational experience. Our school district in Western Michigan had a 2-year program where the students who qualified could spend half the day at a vocational center getting career training in our chosen fields. Mine was commercial art. It put me in an odd mood. It was new and uncertain. I was surrounded by kids from other high schools and the curriculum was intimidating.

It would all turn out for the best later on; what I learned there allowed me to go straight into the job market, bypassing college and students loans. So that was good. But when I think of fall ’81, it always seems to have a grey cloud hanging over it.

The other thing that marked that fall was my first ever sci-fi convention. It was called Babel Conference (a Star Trek reference) and took place in Grand Rapids, Michigan. This was its third year, but only the first one I was aware of. I’d gotten my driver’s license that summer, so I could actually get there on my own. I had no idea what to expect, so it sort of fit into the uncertainty of the season. What was waiting for me there? Would I find a tribe to belong to, or just a bunch of weirdos? 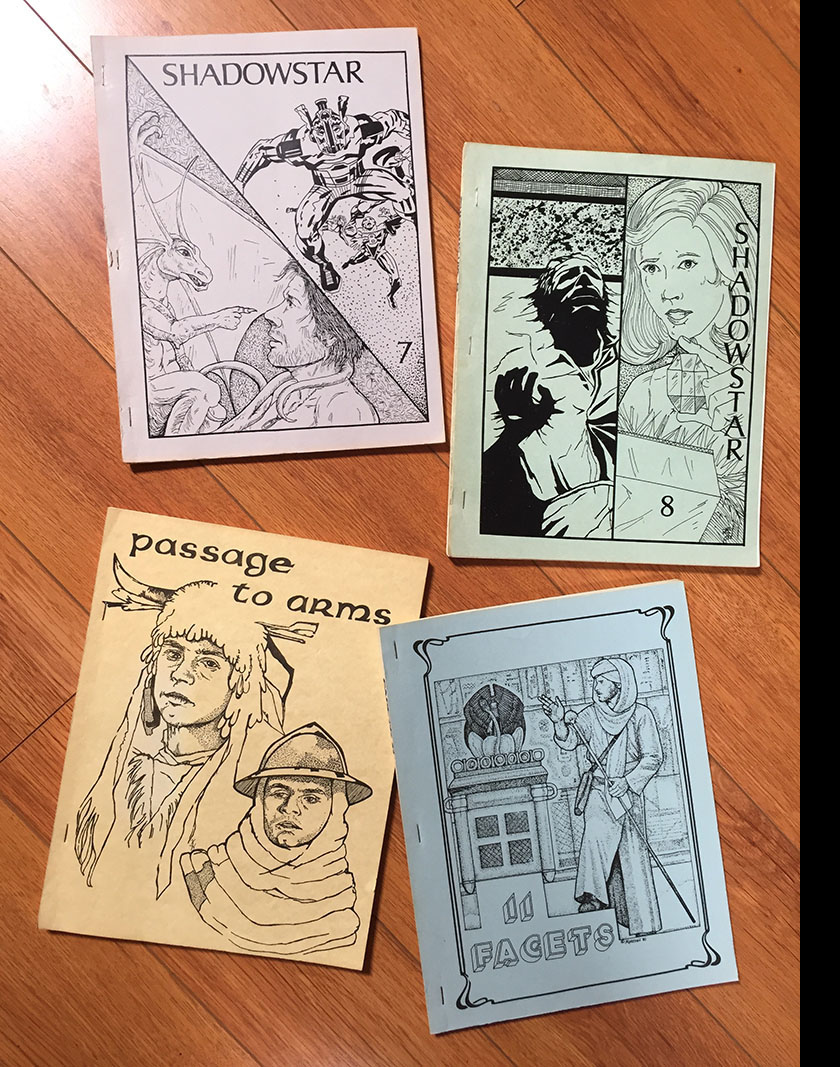 It didn’t help that the morning I drove there (Saturday, September 26) was cold and rainy. Thanks a lot, Michigan. Not helping. I got to the Holiday Inn where it was happening, dropped six bucks on a 1-day pass, and headed inside.

Every moment of that day was filled with discovery. The people were weird in a good way, happy to be in the company of fellow weirdos. The hub of it all was the dealer’s room, which was chock full of fun/cool/strange/fascinating goods I’d never seen before. I for sure remember buying some unusual Star Wars magazines to expand my reference collection for comic drawing.

Then came the killer app discovery: FANZINES. I might have seen the word before, but now I saw what they were: amateur-press publications by fans for fans. They would write their own stories (called “fanfic”), add illustrations (of varying quality), assemble them into printable form (which I was learning about in school), duplicate them, and sell them at conventions like this one.

The “fanfic” was based on Star Trek, Star Wars, and other titles I recognized. The fans were creatively motivated to put them on paper for their fellow fans to read. Exactly what I had been doing on my own all this time, only without the means to share my work. It was the missing piece of the puzzle, sitting right there in front of me on a table in the dealer’s room.

The person who filled me in on all this was named Cathy Ford, and she’d come in with two friends from another city in Michigan to sell her work at Babel Con. They were big sci-fi fans and already had their own unofficial “company” (more like a club) called 50% Offset Gweetna Press. It was a good time to meet; they were working on the first issue of a new series to be titled ‘Noids ‘n’ ‘Droids (Humanoids and Androids; get it?) AND they were open to submissions.

I leapt into the fray: “I draw Star Wars comics. Would you be interested in one?”

As it turned out, NOBODY was doing comics for fanzines. There were plenty of cartoons, but actual comics were unheard of. And Cathy was glad to consider one. Just like that, I had an opening. I got her address and Phase 3 of my amateur comics career officially began.

I wish I’d kept our correspondence from those days, because it was fast and furious and full of optimism. I’m pretty sure I came up with a new Star Wars story the very next day. It was Sunday and I was stuck at home with a zillion things running through my head from the day before; a perfect recipe for channeling creativity. I don’t think it even occurred to me to offer previous work. This was a fresh start and it called for fresh material. 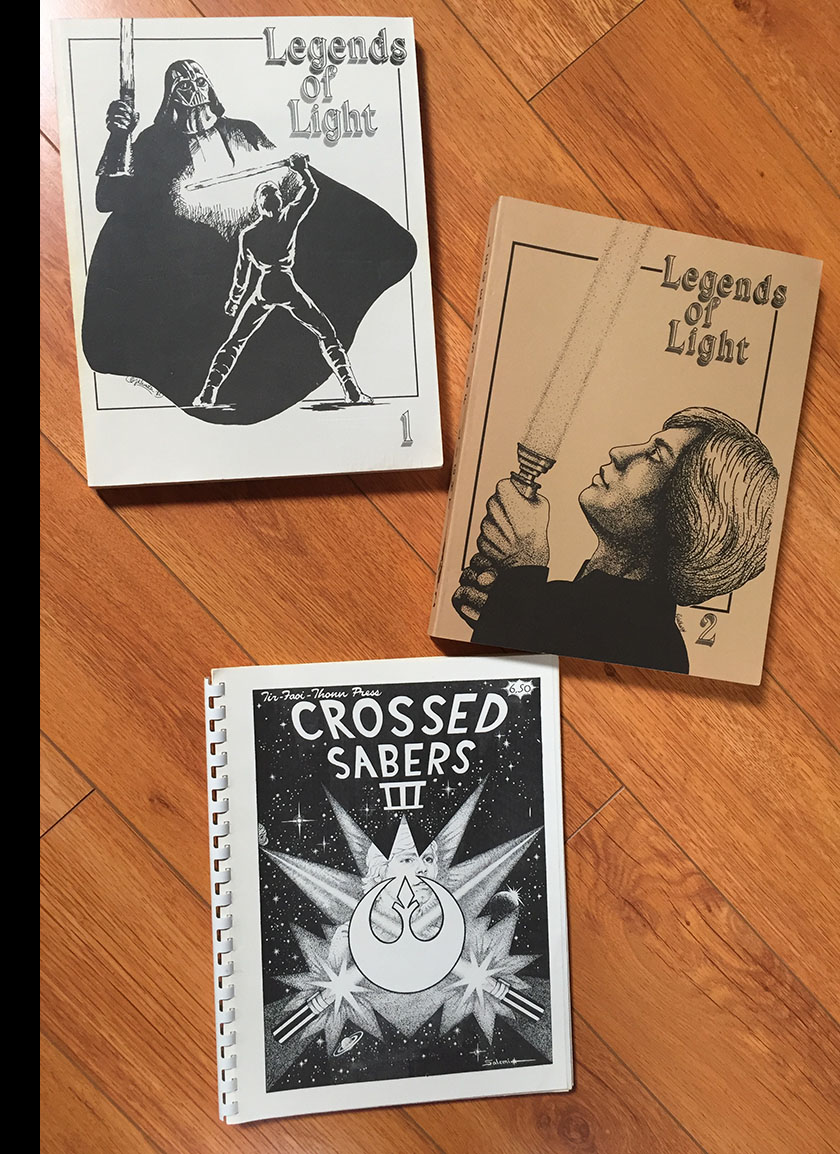 So what’s up with the title of this story, Aquilae?

It wasn’t my invention. It was one of those early planet names that came out of George Lucas’ head. It appeared in the first original Star Wars comic from Marvel (issue 7). There was no pronunciation guide, so I went with “OK-el-ay.” Years later I heard it pronounced “AK-wil-lie” when Mark Hamill and Harrison Ford’s screen test came into public view. It sounded extra exotic, like something more than a planet.

What I imagined was a massive cluster of stars with energy swarming from one to another, just stable enough for planets to orbit around but incredibly dangerous to fly into. Of course, that’s where I would send the Millennium Falcon. I wrote up a summary for what I had in mind and sent it to Cathy Ford, along with a bunch of other ideas for ways I could contribute. She said yes to the story and appointed me as the “Art Editor” of Gweetna Press. The deadline was early December, so I only had two months to get this together. Way more than I needed.

Part 1 (of 2) was published in ‘Noids ‘n’ ‘Droids #1. Imagine the rush I got when a copy arrived in the mail. 16 years old, and PUBLISHED! It didn’t matter that there were only a couple hundred copies and I would never see a dime for my work. There it was, printed on paper and bound into book form, to be sold at the next sci-fi con.

You may be wondering at this point how any of this was legal. How could fans publish unlicensed stuff and charge money for it and not get sued into oblivion? As Cathy (and others) explained it to me, the studios knew all about it but didn’t consider it worthy of a crackdown. Back then, they viewed it as harmless at worst, free promo at best. It had been going on for many years, giving fandom unexpected notoriety when the “mundane” world learned about things like slash fiction (now called “shipping”) and the Mary Sue phenom (self-insertion stories).

Fanfic is still around and still thriving, as far as I can tell, but when paper fanzines were replaced by blogs and websites, the need to recover printing costs went with them. Few if any had turned enough profit to live on, which was another reason entertainment lawyers had no incentive to bring the hammer down.

All 16-year-old me cared about was finally having a way to get my goofy little Star Wars comics out into the world instead of hiding them in a file folder until I could get this website started. Going to Babel Con ’81 and meeting Cathy Ford opened up a whole new world. I was going to spend a LOT of time there over the next several years. (In fact, I was friends with the core con staff by ’83 and they selected me as chairman for ’86, but that’s another story.) 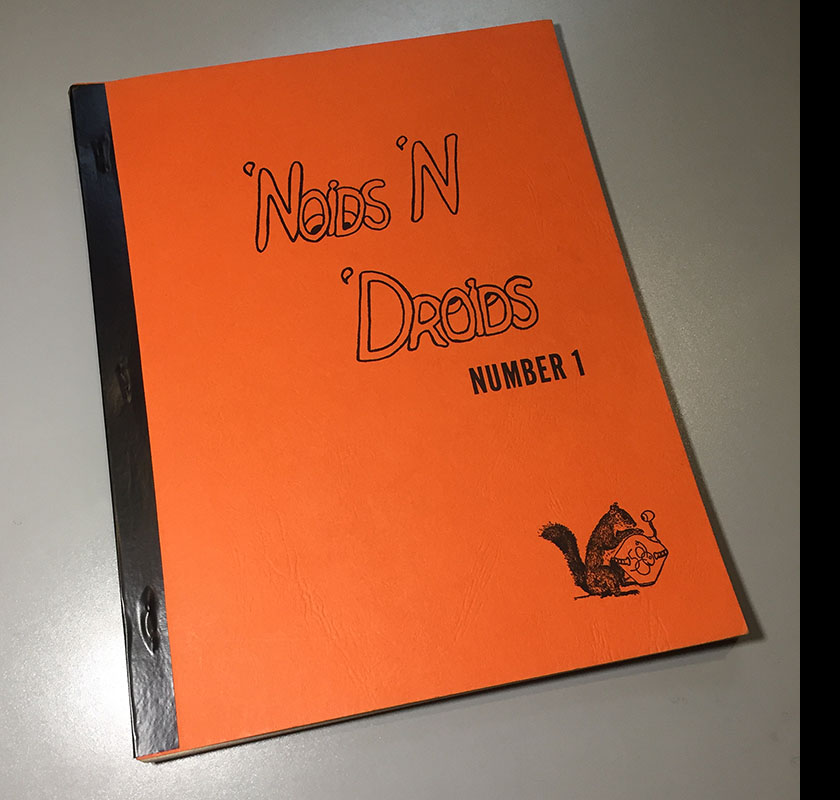 ‘Noids ‘n’ ‘Droids #1 (126 pages) was published in December 1981. I volunteered a title page and it was accepted without fuss. (Cathy Ford wasn’t picky about ANYTHING, just happy to have it.)

I was named as “Art Editor” in the first issue, but that was mainly symbolic of the art I produced. I was never given any art to edit. Cathy put this plug into the introduction on my behalf: “Tim Eldred has a concept for a new Star Wars fanzine entitled Hyperdrive. He plans to adapt contributors’ stories to a comic strip format.” Yep, right out of the box I was planning to make my own ‘zine. And I followed through with that plan. We’ll get to it, don’t you worry.

My story contribution was Aquilae Part 1, and it taught me a valuable lesson. My professional comics instructor said I could use a blue pen or pencil for roughing the art, then draw over it in ink and the blue wouldn’t reproduce. This was true for big-time comic book publishing, but NOT – as it turned out – for small press photocopies. All my blue lines turned black and the art was a mess. It was still readable, just not the best way to debut. 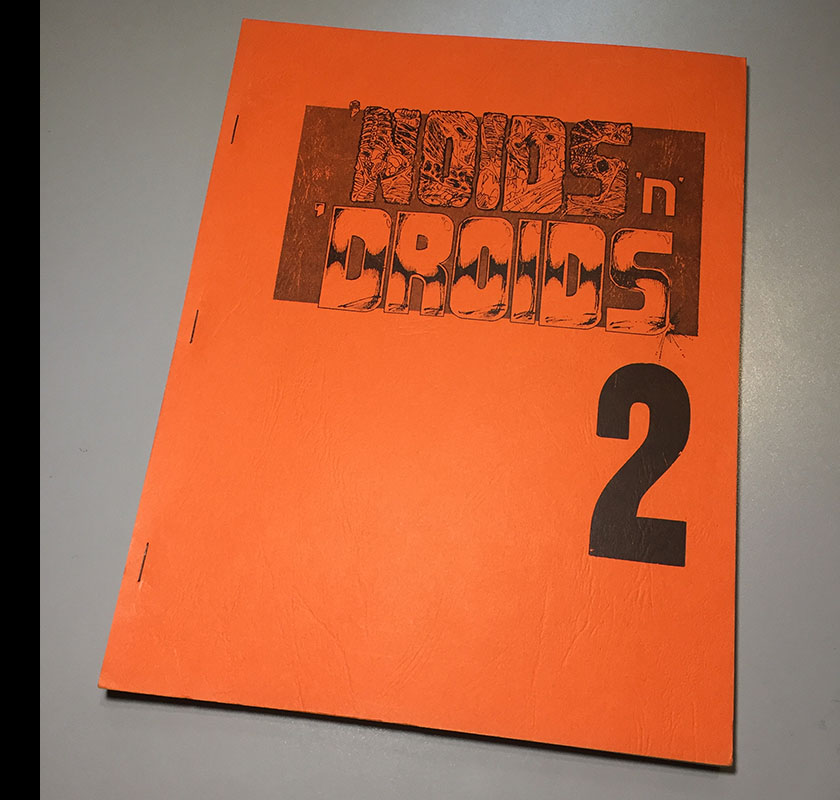 ‘Noids ‘n’ ‘Droids #2 (160 pages) was published in May 1982 and made its debut at Media West Con, a much bigger event than Babel Con. Pretty much Michigan’s version of mardi gras for sci-fi geeks.

For this issue I contributed a new cover logo, title page, some interior graphics and cartoons, and Aquilae Part 2, which looked MUCH better than Part 1. I also wrote an embarrassingly cringey “thesis” on drawing comics that just dripped with self-satisfied smugness. I had finally arrived at the “big time,” you see. At just 16 years old. So I deserved to blast my own horn. Cathy really should have reigned me in, but I guess she didn’t see it as her responsibility. It’s so awful I only look at it when I need a new lesson in humility. Okay…I’ll post it down below. 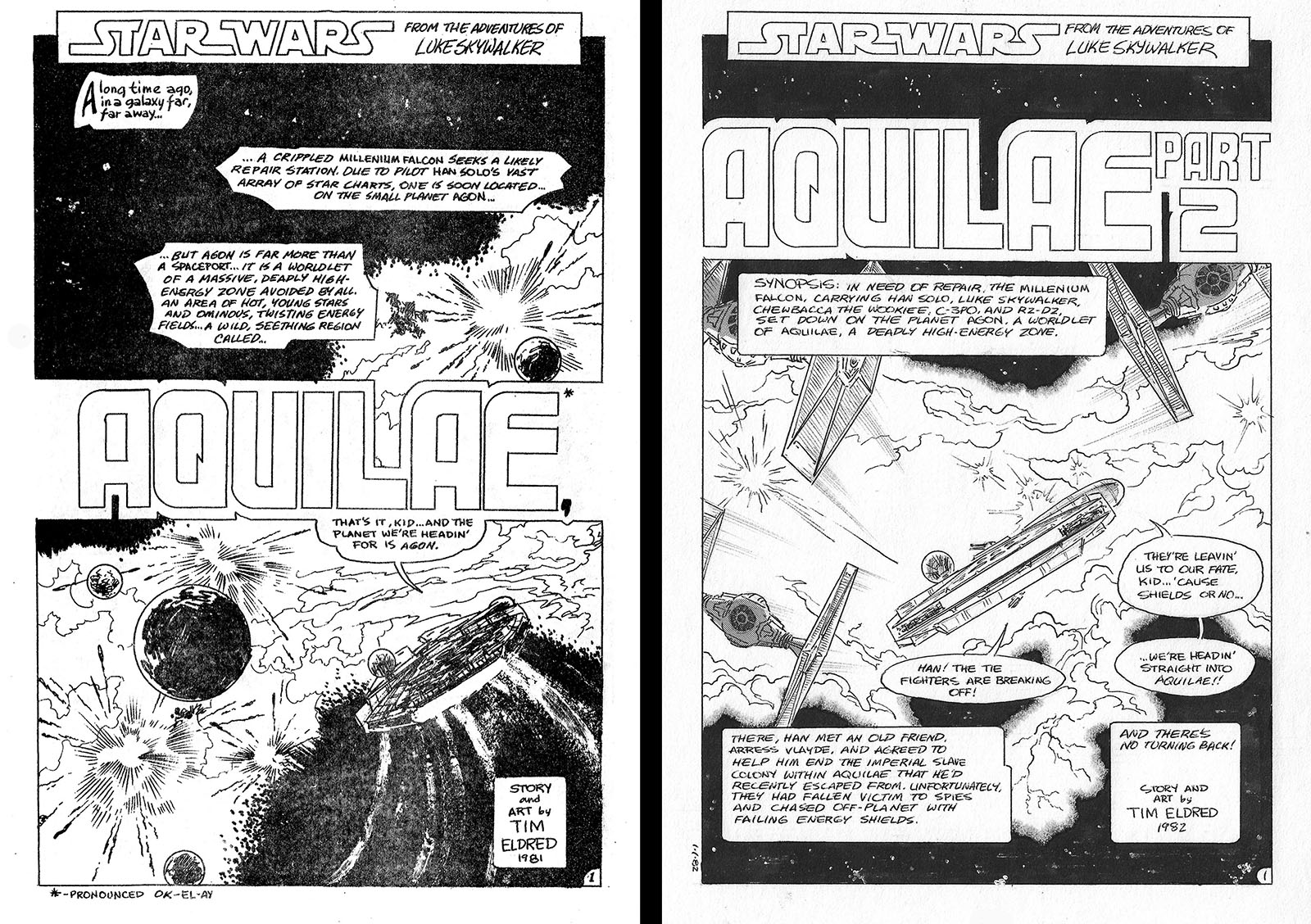 Pages from both ‘zines: 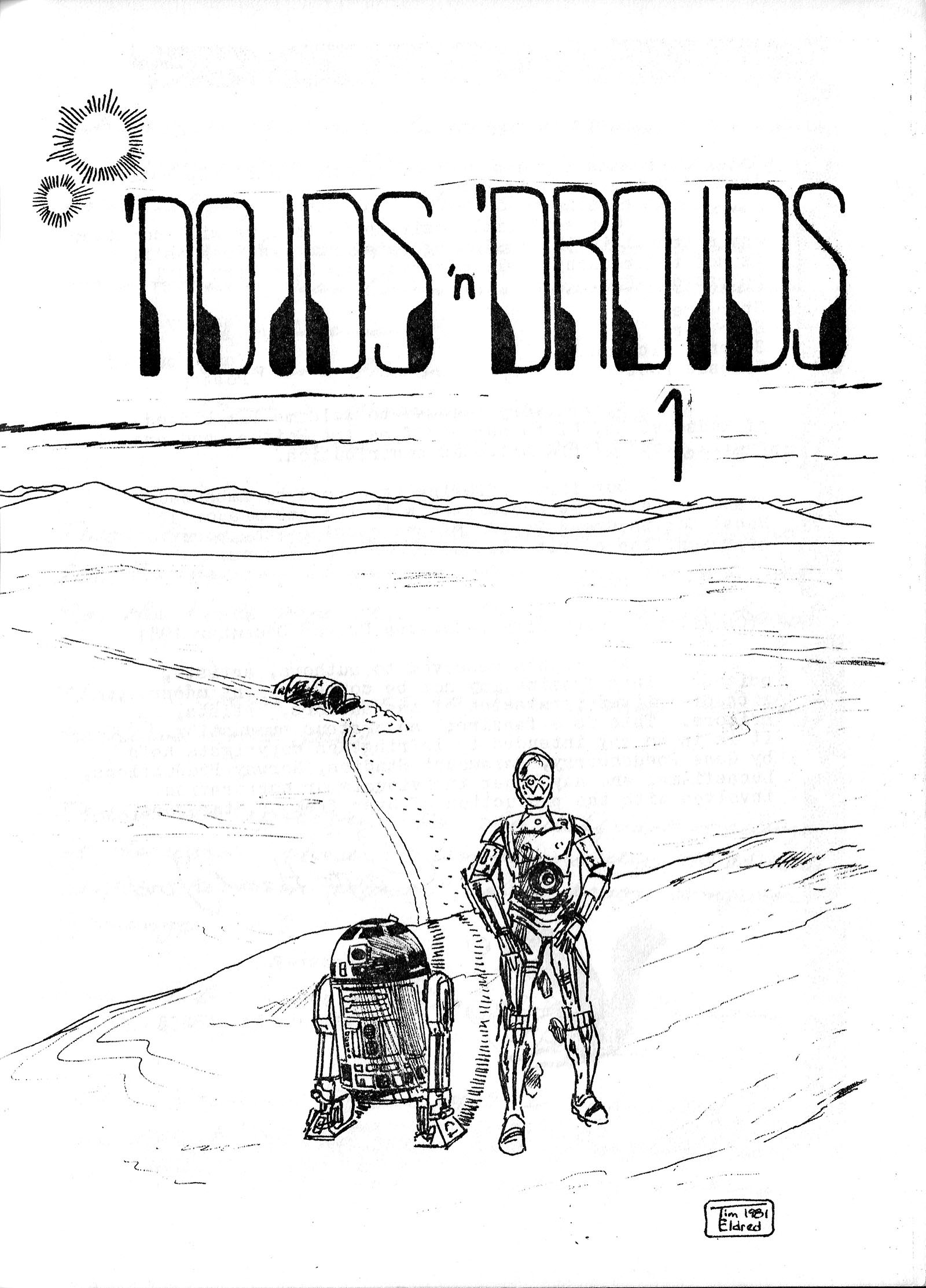 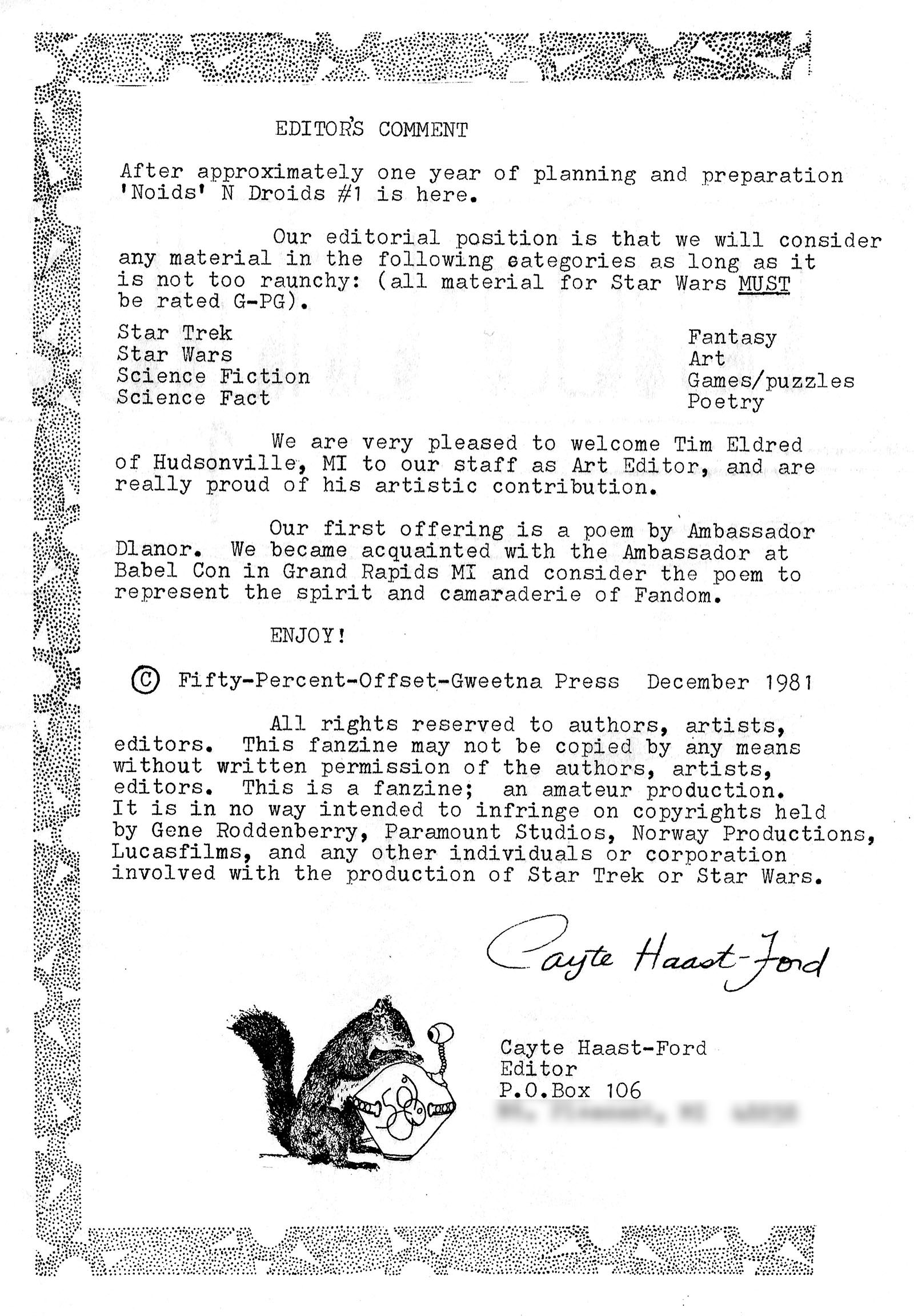 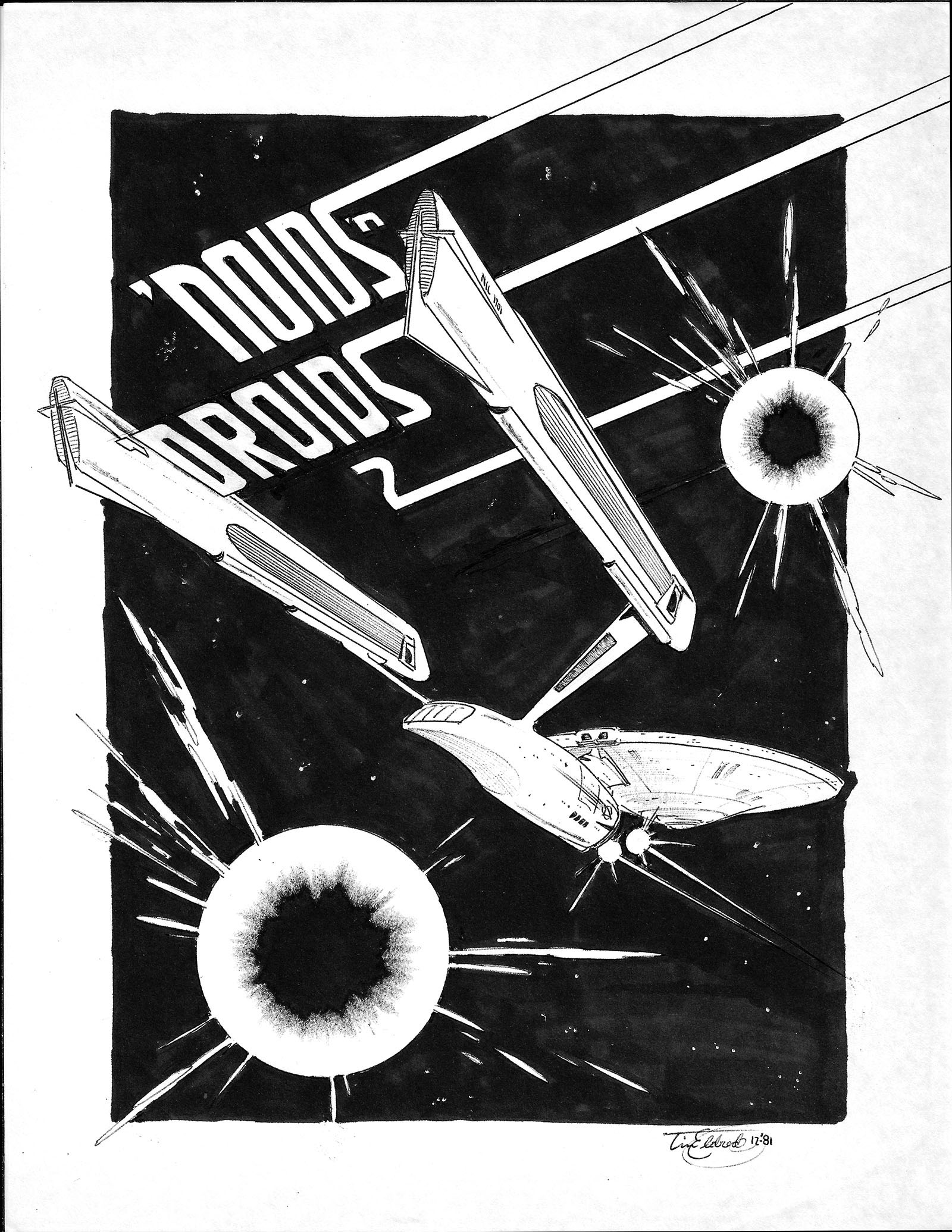 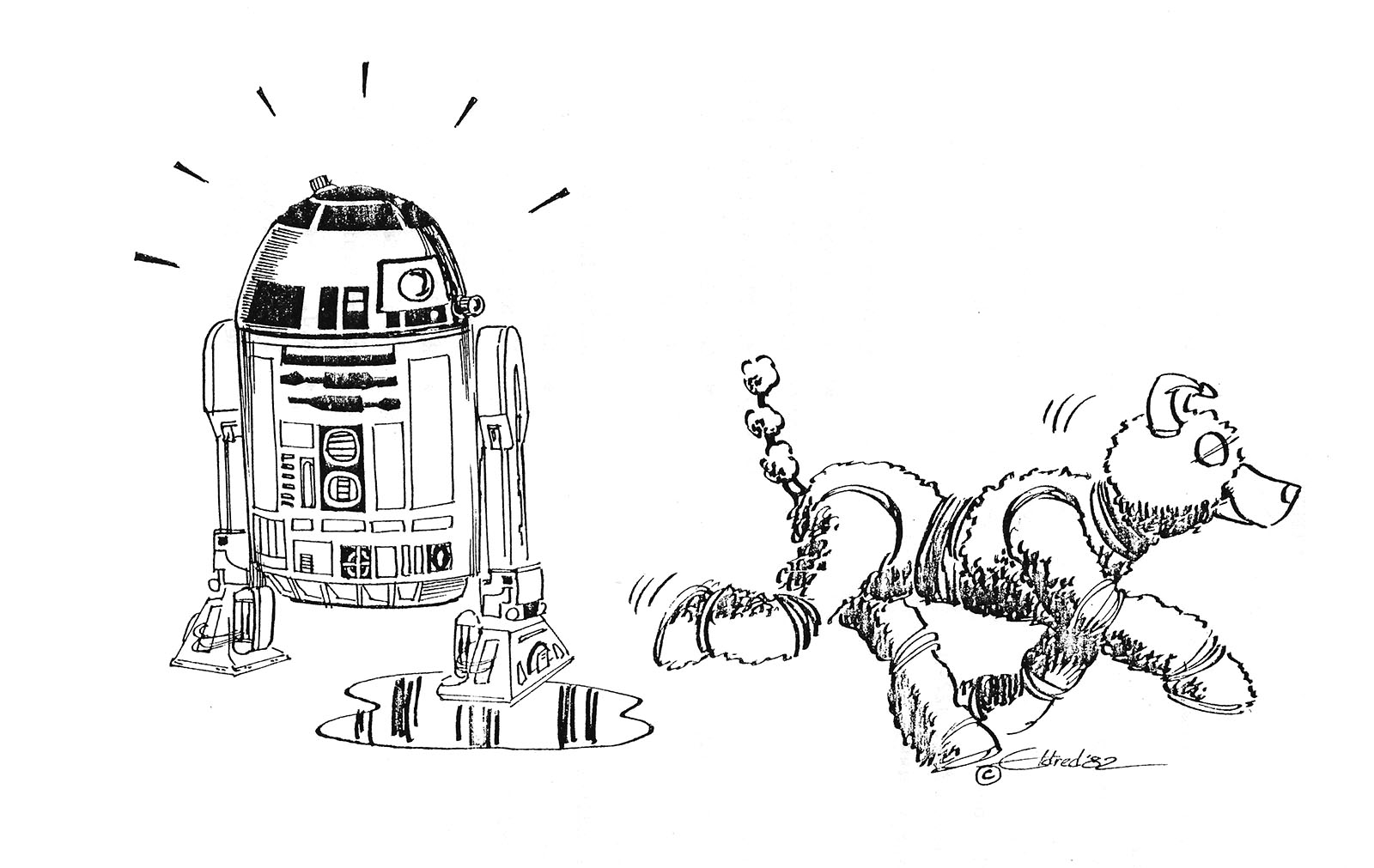 Below: that “thesis” that I should never, ever have written. You really don’t want to read it. But you’re going to anyway. 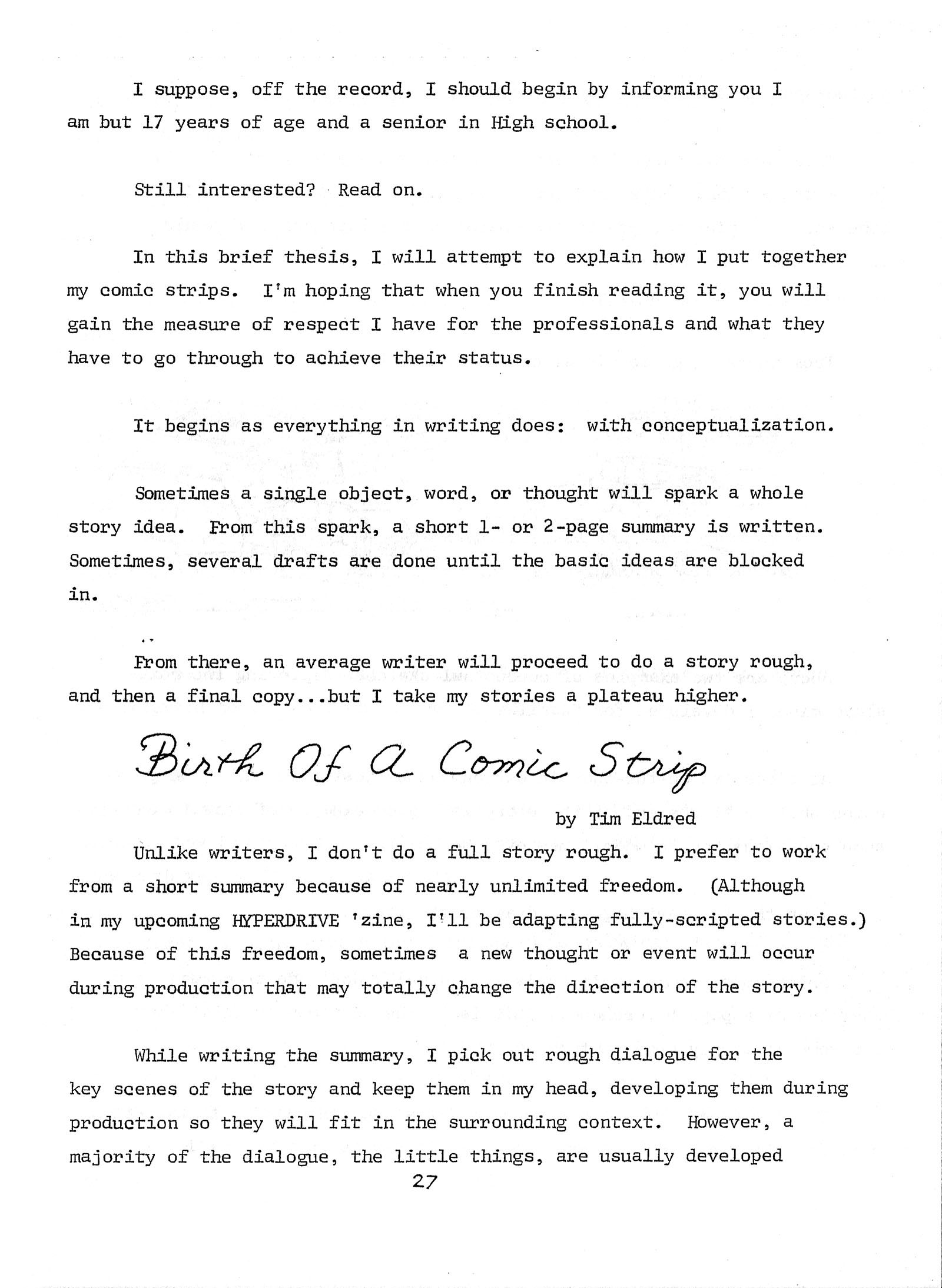 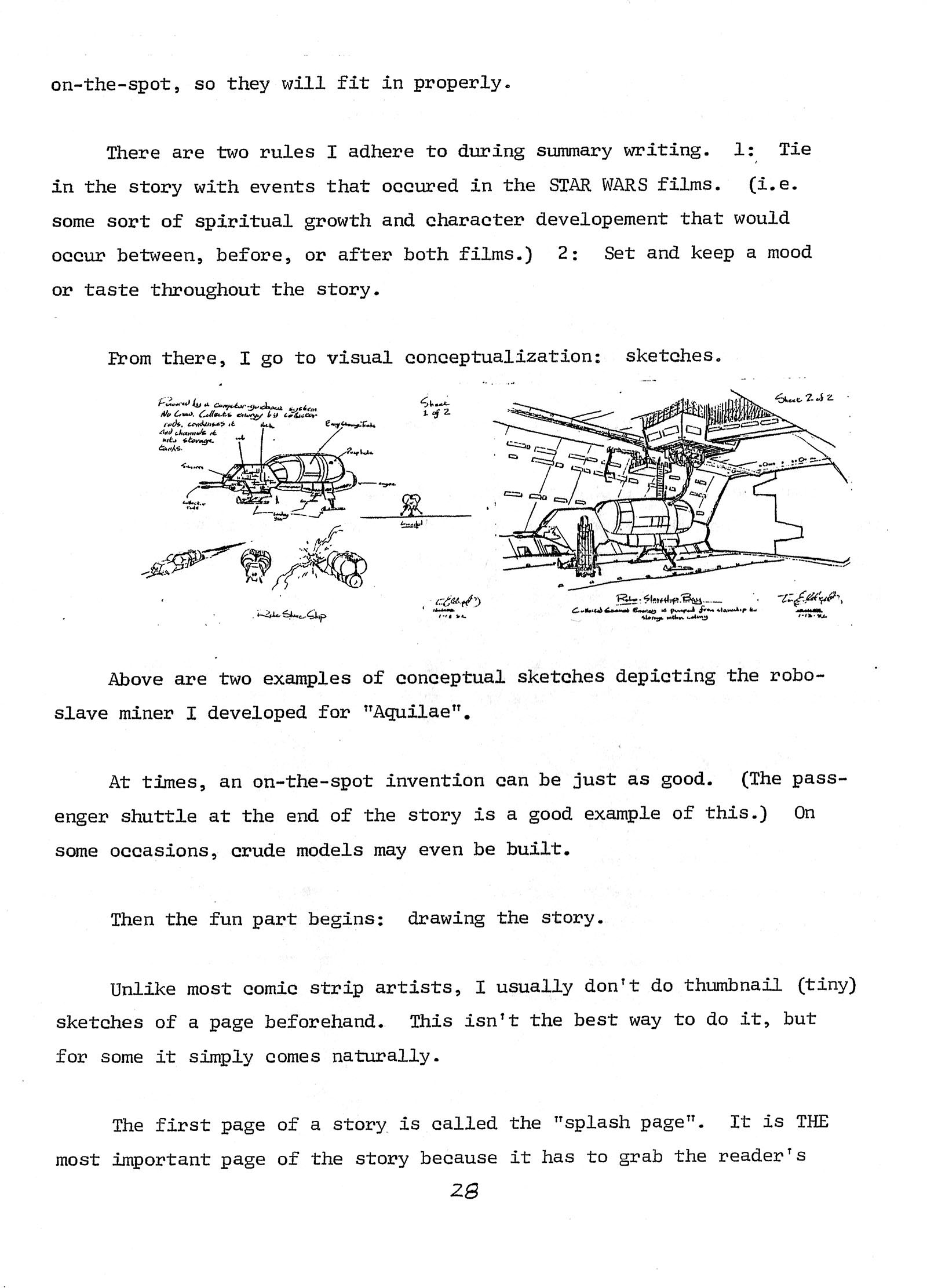 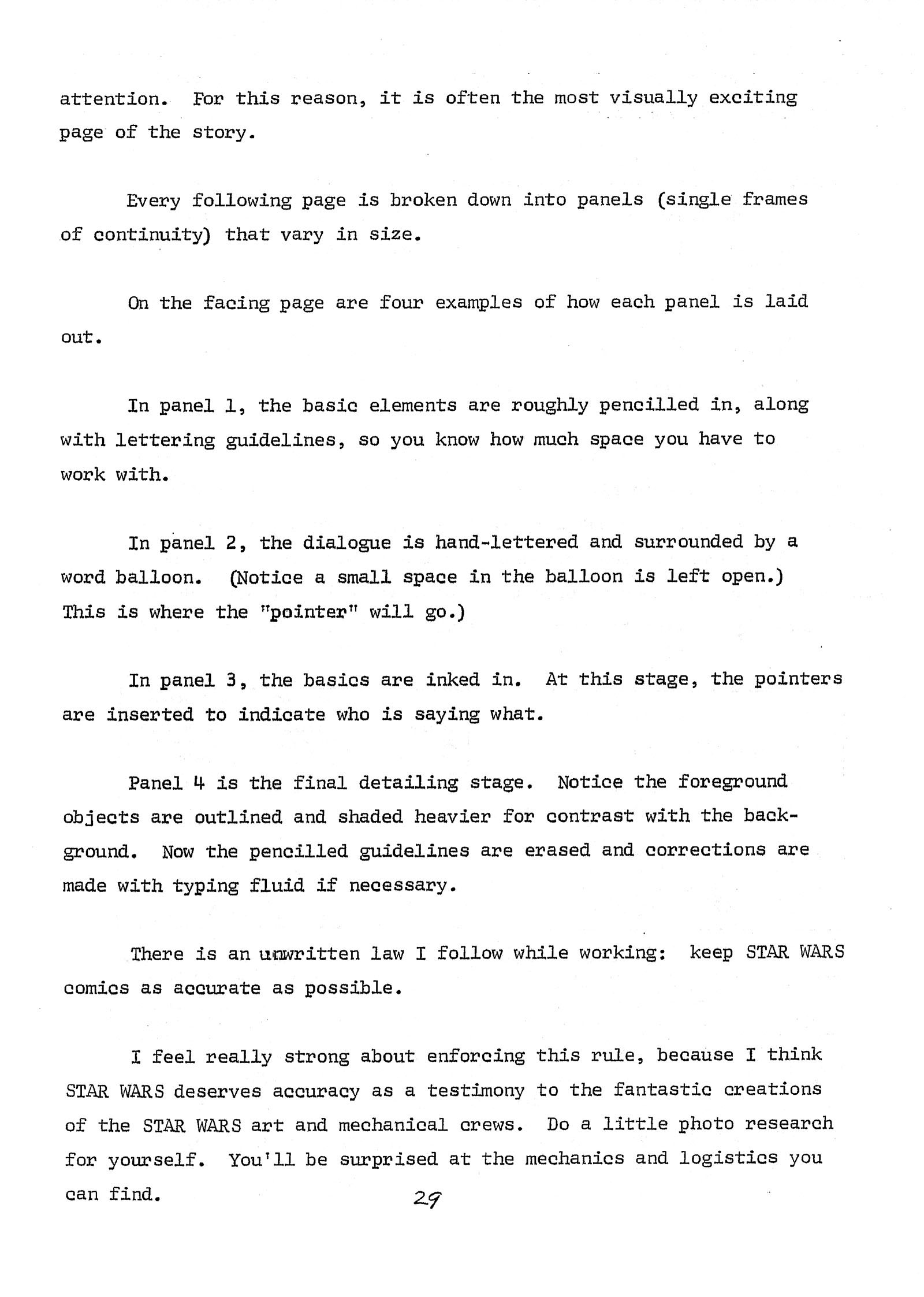 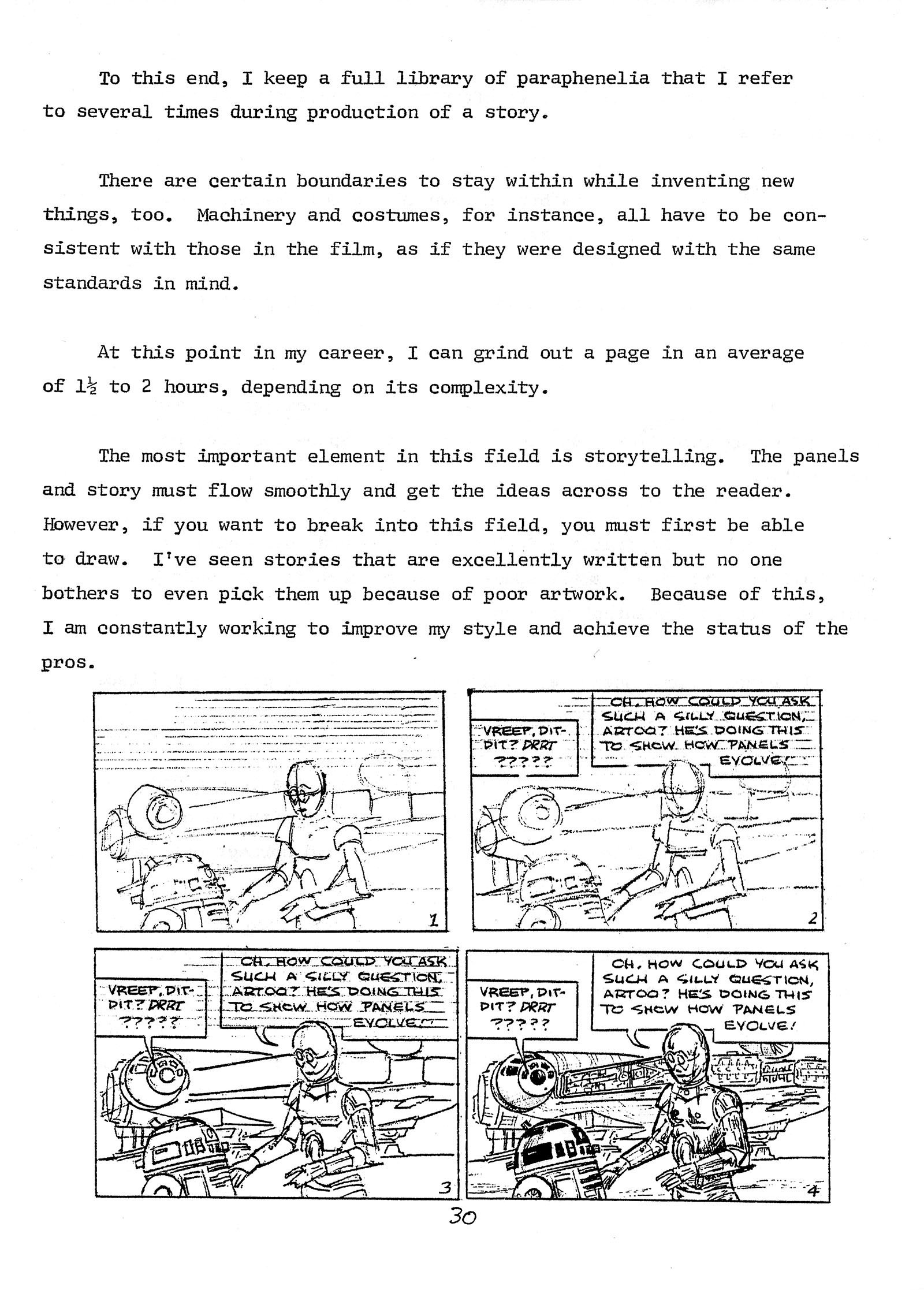 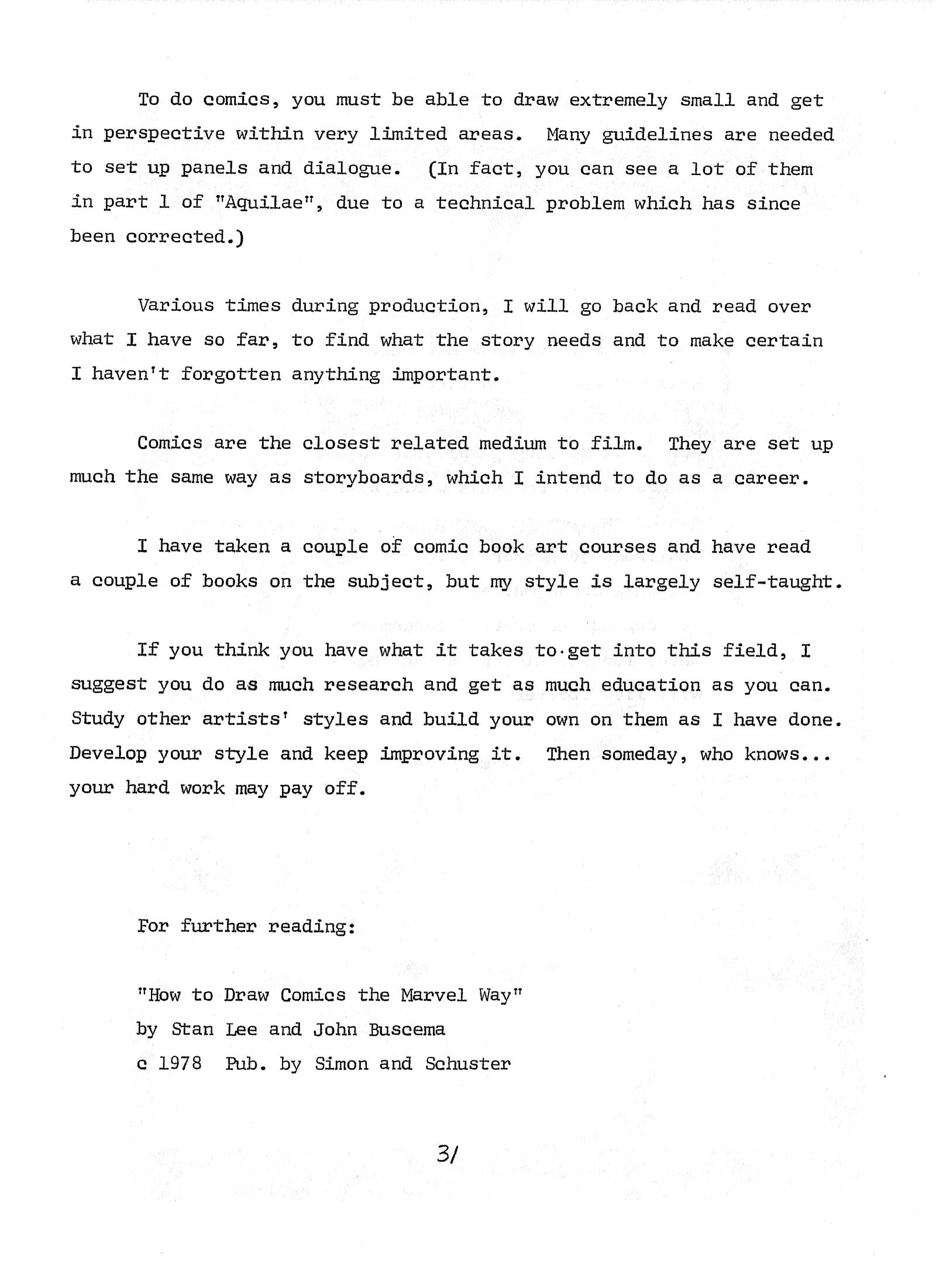 See what I mean? That kid really needed his bell to be rung a couple times.