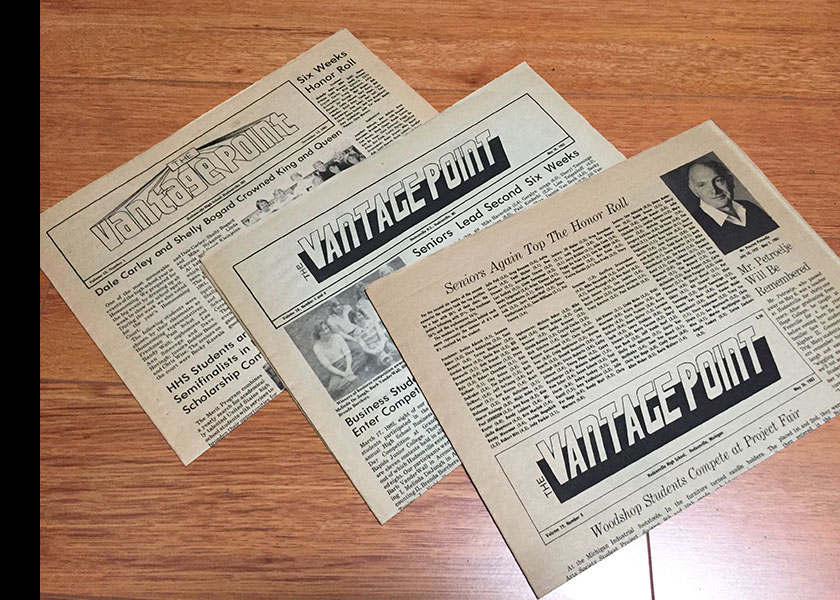 When I decided to put some of my earliest works on a website for public view, I knew it would be like disclosing my high school yearbook photos. And now that becomes literally true.

My four-year sentence at Hudsonville High commenced in the fall of 1979. Hudsonville is a farm town in western Michigan where the onion fields bloom, the livestock takes to pasture, and conservative Christians decide what’s acceptable at all times. I knew from an early age that my future waited to be discovered elsewhere. In the intervening time, my job was to dodge bullies and find opportunities for subversion. Being an artist sort of made that a natural pastime.

To their credit, nobody ever tried to push me off that path, teachers and students alike. My lack of height and disinterest in sports made me a target, but my drawing ability was immune from ridicule, kind of like a super-power. I have a LOT of negative memories that I never want to relive, but this one exception kept it from becoming Hell on Earth.

My junior year began in the fall of 1981, and two new opportunities opened up for me. First, I was eligible to spend half the day off-site at a county-run vocational school (commonly referred to as the “skills center”) where I took a two-year course in Commercial Art. I can’t overestimate how important that ultimately became, giving me the technical knowledge I needed to bypass college completely and enter my field shortly after graduating in 1983.

The other opportunity was to become a staff member of the school newspaper, called The Vantage Point. I actually had made a contribution prior to this point, when I won a short story contest as a freshman or sophomore (can’t remember which) and it got published. True to form, it was a sci-fi story featuring a gloomy conversation at the end of the world. The last sentence was literally just “Earth died a month later.” It was bereft of literary value, but I guess nobody else submitted anything better that year.

I served on the staff throughout my junior and senior years, and it took the place of a class, which was pretty great. There wasn’t a lot of work to do, so for most days I’d show up and be dismissed. The only time it got busy was when we actually had to assemble the paper once a month.

The editor-in-chief was my favorite teacher John Burggraaff, who taught Creative Writing. I was already a self-propelled writer, and never had to struggle in his class. I’m sure he recognized that, and pretty much gave me a free hand to come up with my own articles for the paper. Most had nothing to do with news and were simply my attempts to entertain the student body. In retrospect, it’s kind of amazing what I got away with as a feature writer.

My only regret now is that I can only find three issues of The Vantage Point in my archive: the first one I was involved in, the last issue of my junior year, and the last issue of my senior year. But my most visible contribution was on the front page of every issue, in the form of the logo. I can’t remember if I was asked to do this or I volunteered, but I’d already done many of them on my own projects so this was all in a day’s work.

Below are various artifacts from the first and last issues I worked on. Just know that there was a lot more, and it was all equally ridiculous. Someone really should have reigned me in. 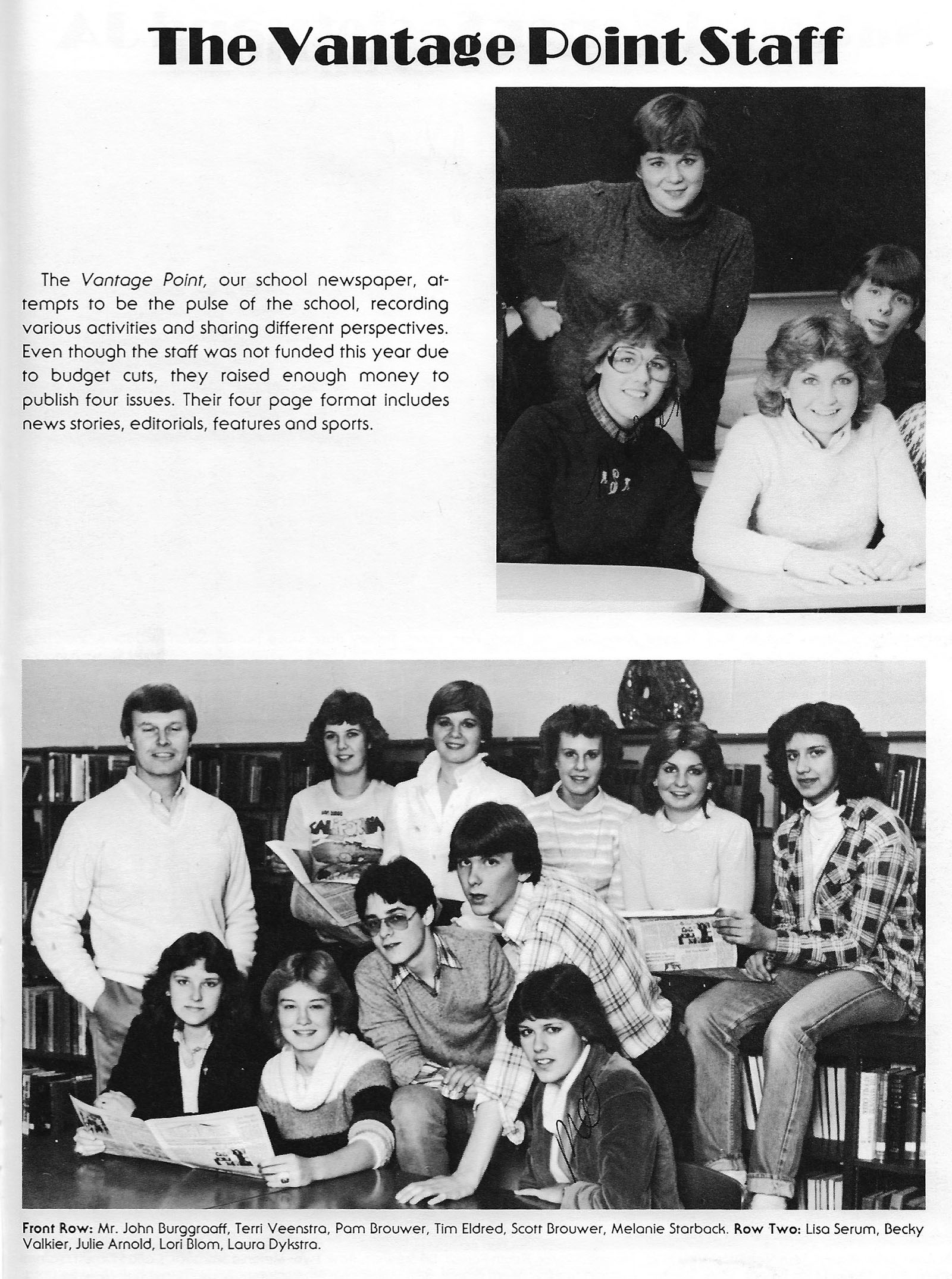 Staff page from the 1982 school yearbook. I’m just left of center of the lower photo with that shifty look in my eye. Come on, they should have known it was a mistake to let me in.

Front page of my first issue shown below, sporting the first of my two logos. 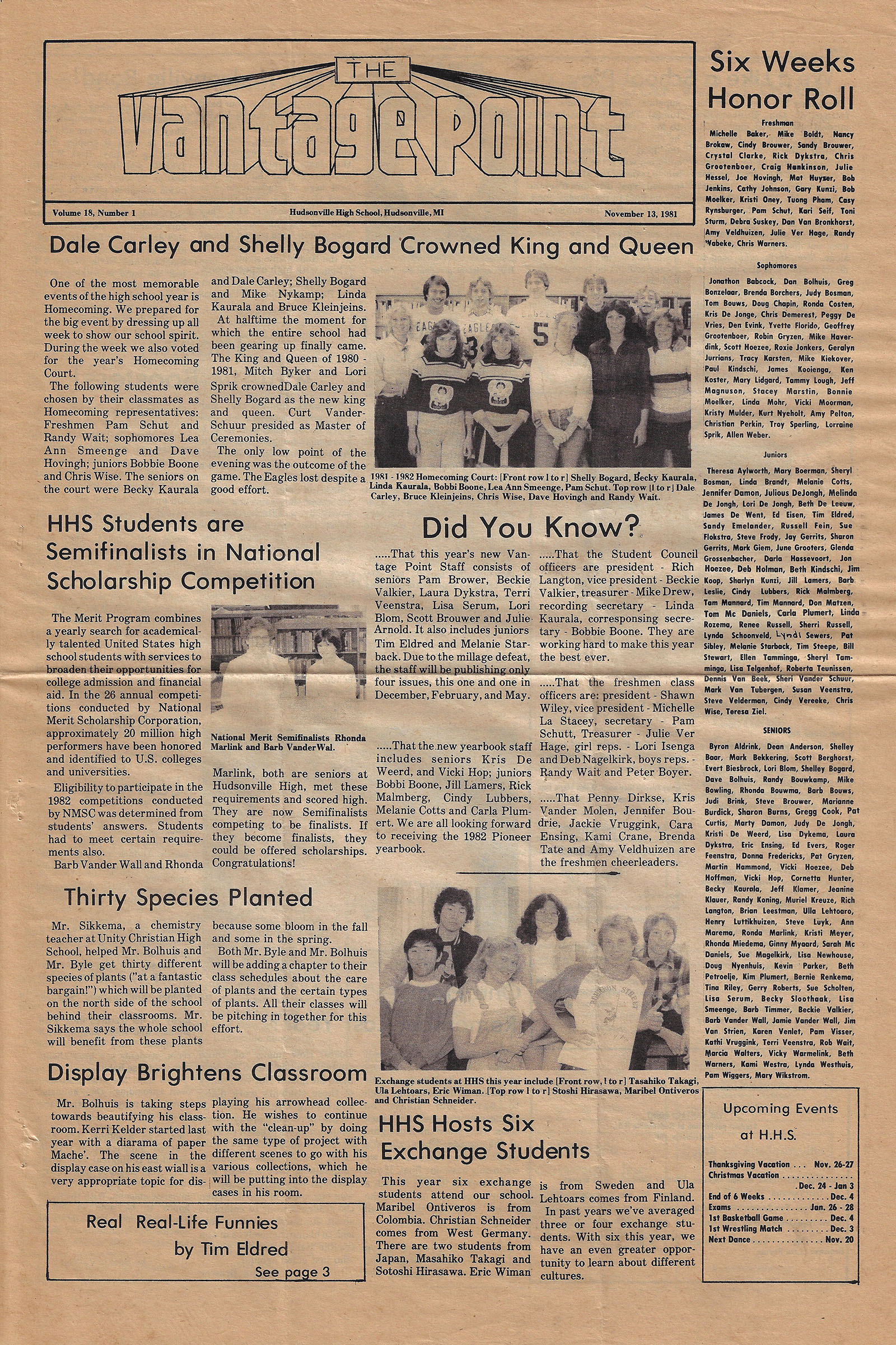 I came on strong in my first issue. It was only four pages, and I pretty much owned page three with a long comedy article and a comic strip. Page three shown below… 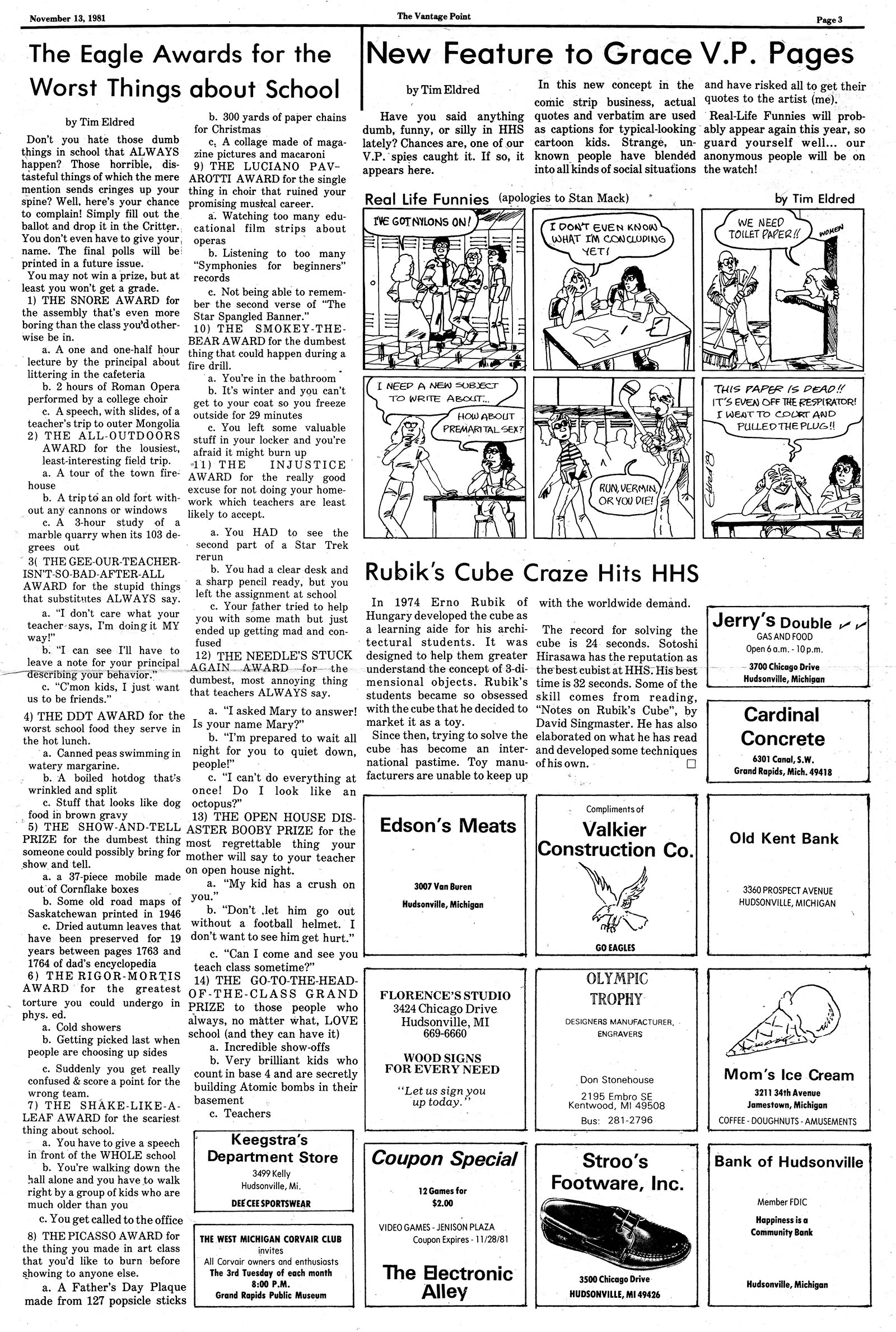 Seeing this again reminded me that I also drew the two cartoons in the ads; the Eagle (our school mascot) and the ice cream cone. I can’t remember if this was requested or volunteered. Knowing me, probably the latter. 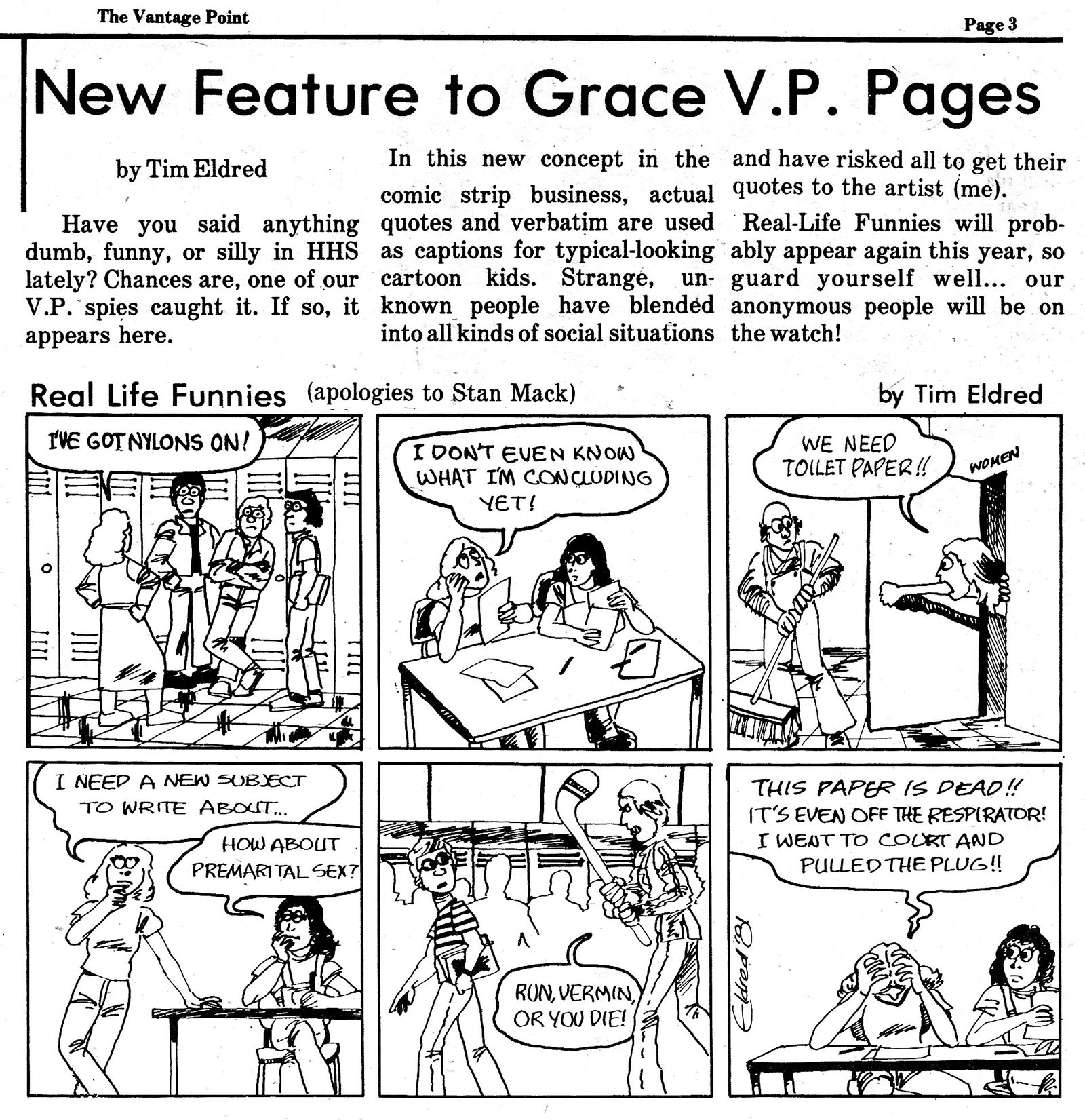 Here’s a closeup of the comic strip. I’d learned about a cartoonist named Stan Mack, who created a long-lived series called Real Life Funnies. His gimmick was to write down random things he overheard on the streets of New York and plug them into cartoons for The Village Voice (see some examples here).

I swiped the name and idea and put them to work in the halls of Hudsonville High, asking other newspaper staffers to bring me their discoveries. No oversight from Mr. Burggraaff was solicited or offered. The comic got into the paper with no changes. Once I got it out of my system, I never did another one.

Below is a more readable version of my high-comedy article, which I think I just invented and submitted all on my own. It went straight to press as is, which is astonishing to think about. I either had the best or worst editor on Earth. 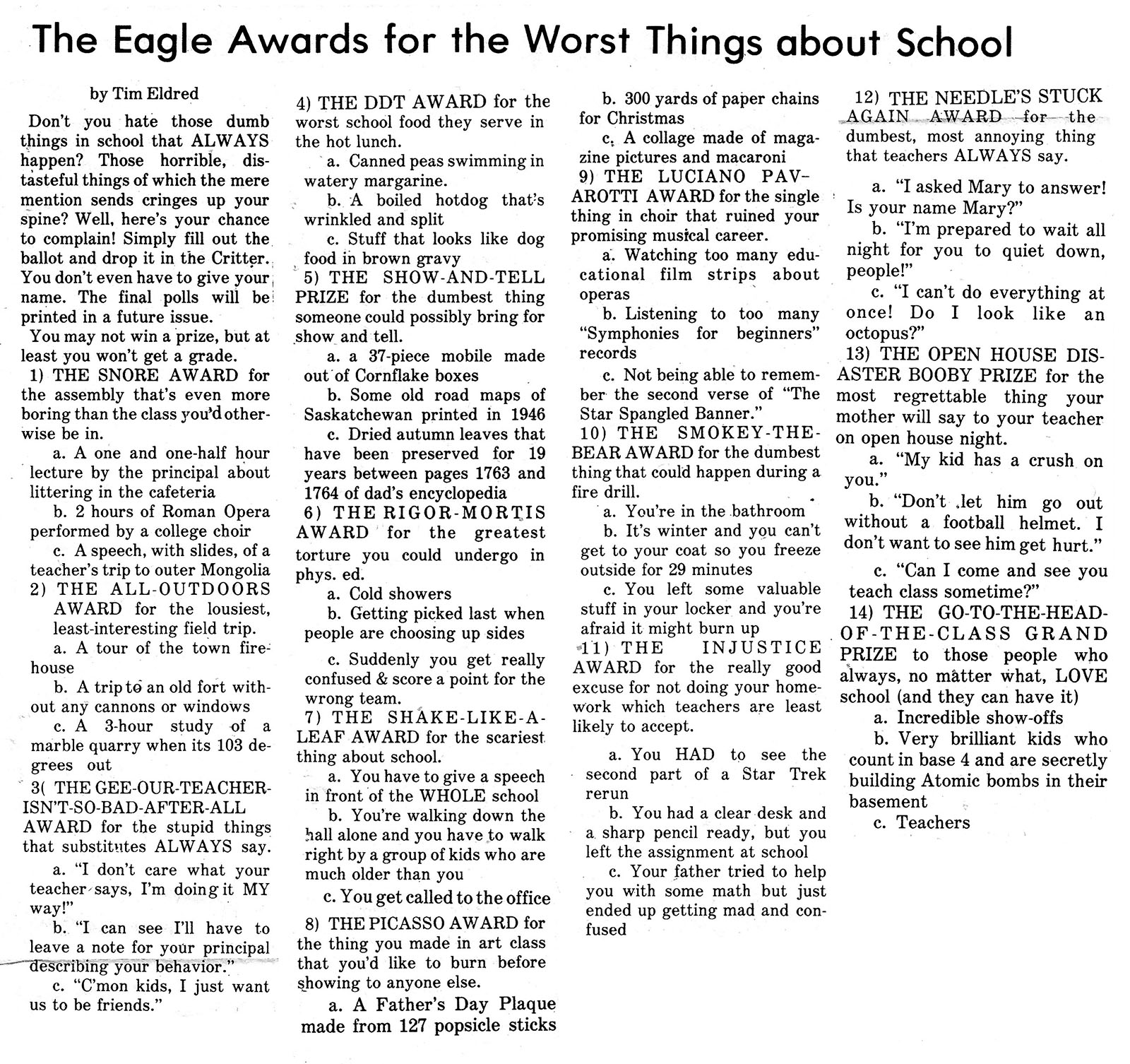 Jumping forward, here’s the staff page from the 1983 high school yearbook, which came out shortly before graduation. That’s me looking shady in the shades. That’s also me in the lower right pic assembling a page. The cartoon character I drew into the photo had a story all his own. 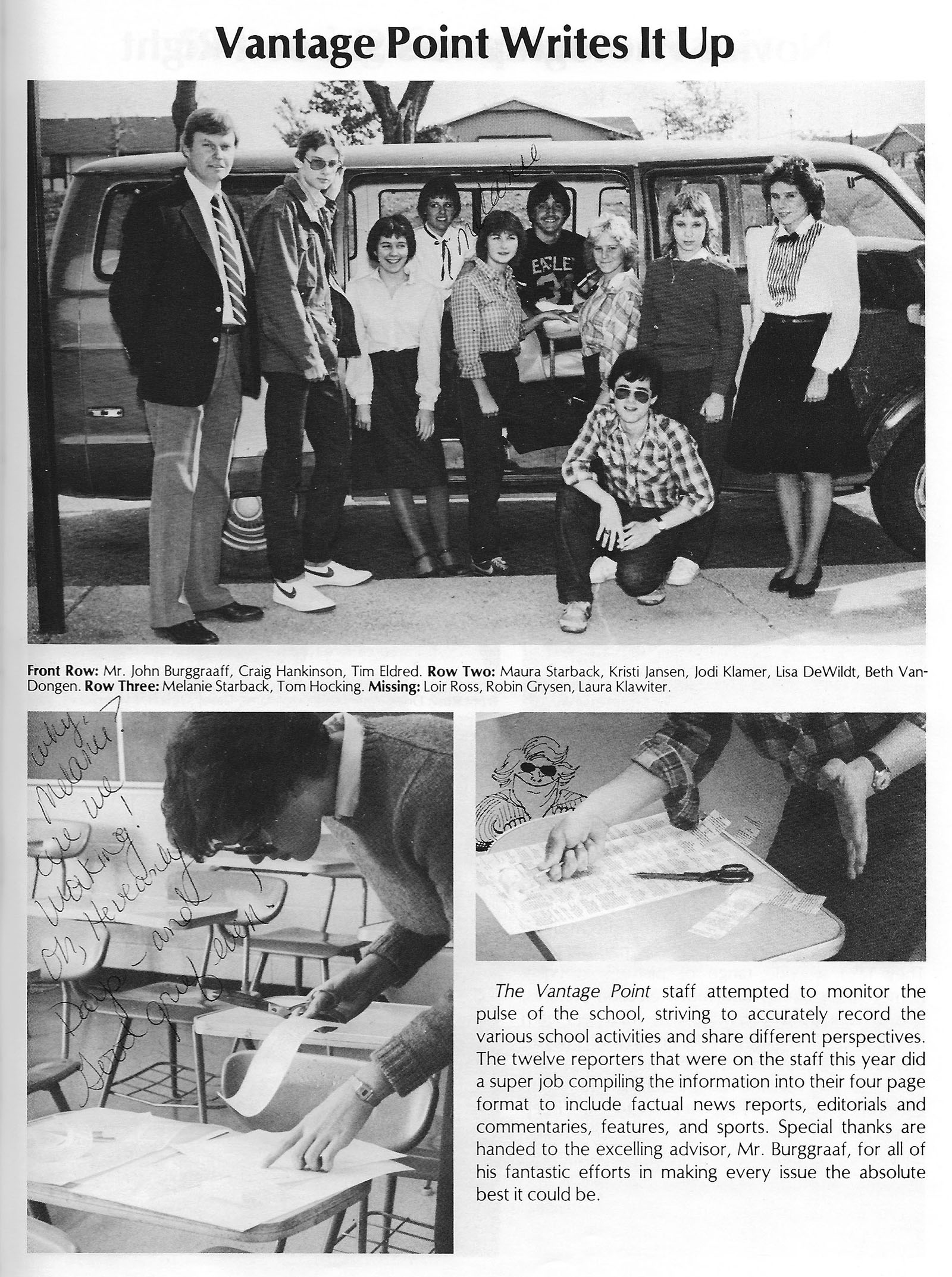 Below is the front page of my final issue, with the second logo I designed for the paper. I have no idea what they replaced it with. After I graduated, I never looked back. 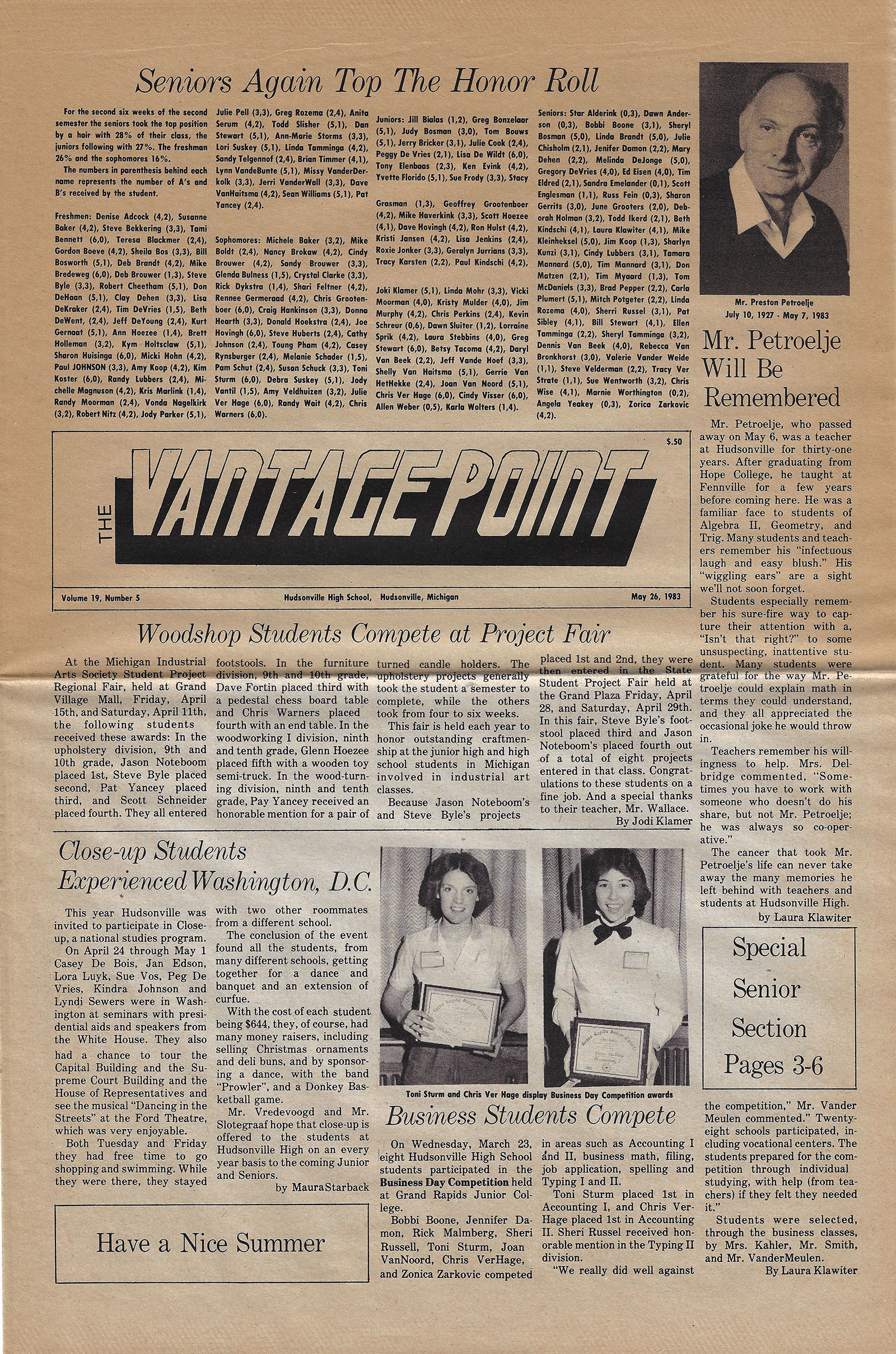 OK, and now the cartoon strip. I came up with it at the start of my final year in fall 1982. The character was Melvin Milktoast, a fictional student who went to Hudsonville, an uber-nerd and would-be superhero who spent all of his time dodging bullies (same as me). His sidekick was a dopey alien named E.T., whose powers always managed to get Melvin out of danger. There was nothing at all redeeming here. Nothing was learned by anyone. But nobody told me to stop.

One thing that’s seared into my brain was sitting in home room on debut day and listening to the morning announcements. “The new issue of The Vantage Point is out today, featuring X, Y, Z, and a new comic strip for and about Hudsonville High School.” Um…okay? I wouldn’t have described it that way, but I didn’t write the announcement. Utter madness.

Below is the final installment of this complete waste of time. (Or click here to read an enlarged version.) 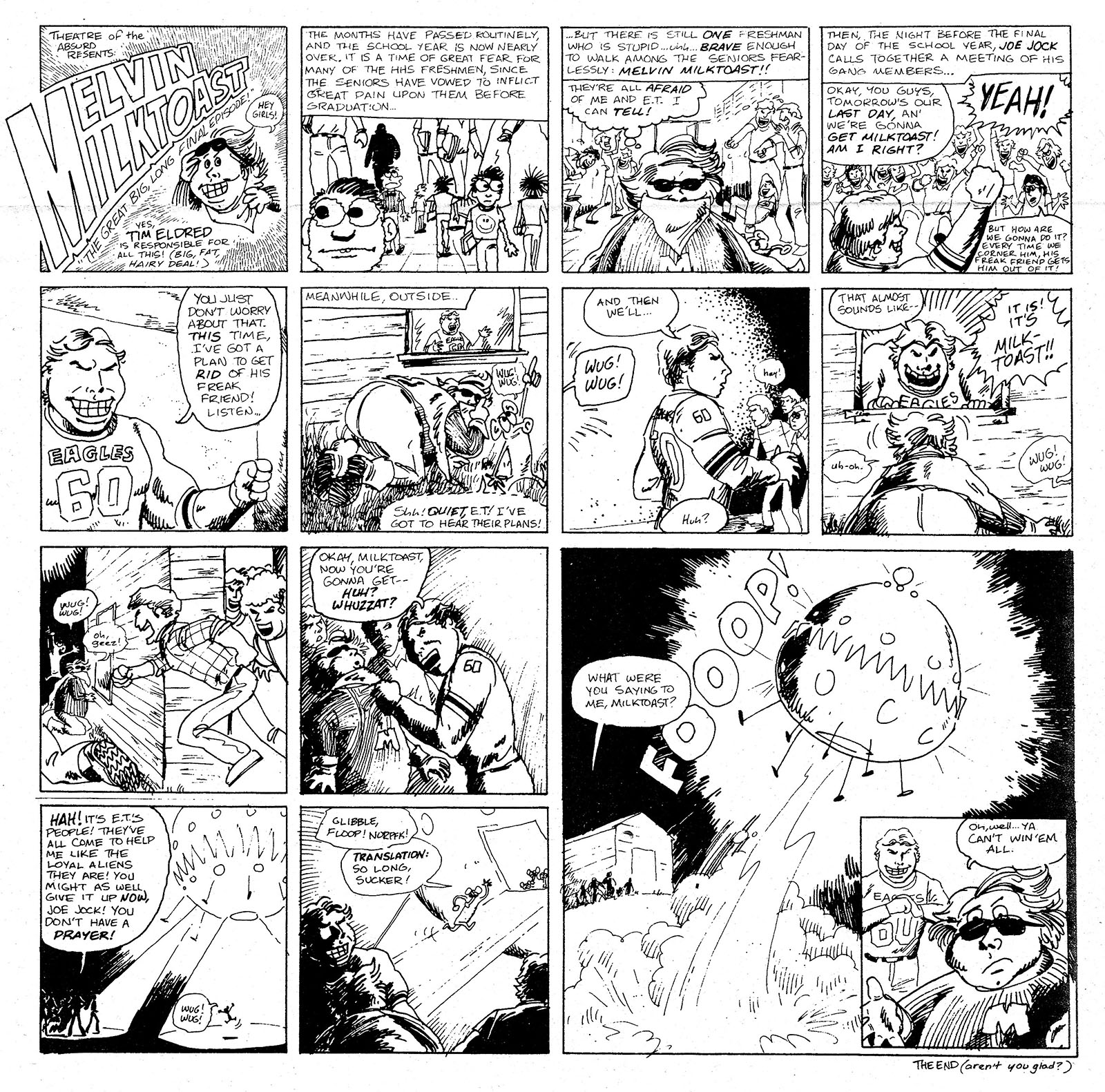 And the moral of the story was…sometimes you get abandoned and beat up? Yep. That was my message to the student body. Advocated in an official school publication. Enjoy.

Bonus #1: two more appearances in the 1983 yearbook. I’m holding one of the early Melvin Milktoast comics in the second pic.

Below is Bonus #2, which I guarantee you didn’t expect when you started reading this. Explanation follows. 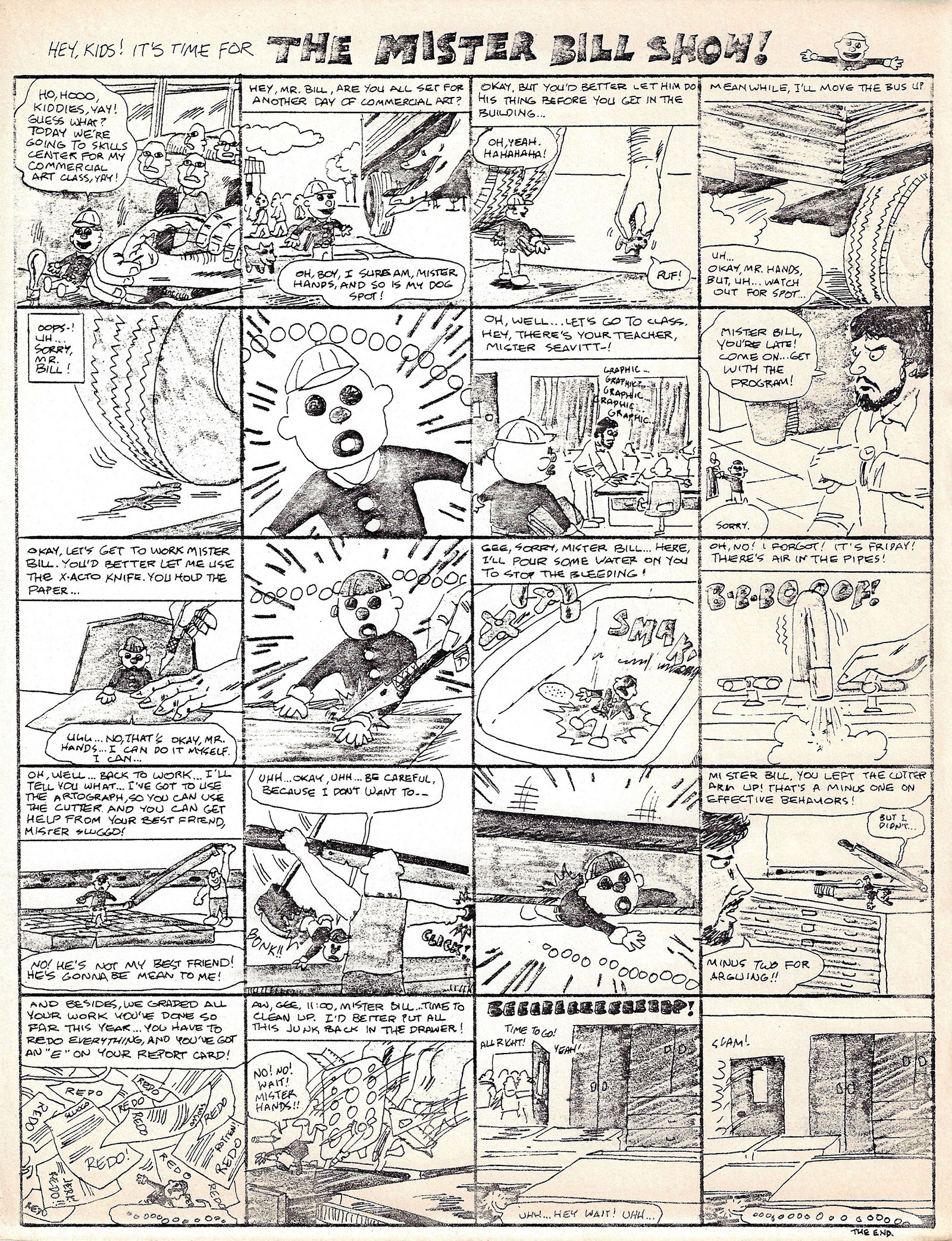 This didn’t appear in The Vantage Point. It was a satirical look at the Commercial Art class I attended at the “Skills Center.” If you don’t recognize Mr. Bill, all I can say is that you have no idea what kind of impact Saturday Night Live had on us as high schoolers. (Get a taste here.)

Our teacher was the fussy and fastidious Perry Seavitt, who was a constant target for the homophobes in his class. All my experiences with their ilk back in Hudsonville revealed to me exactly what they were, and guaranteed I would never become one of them. Perry was nothing but kind and encouraging to me, always interested to see what I would do with his assignments, and excited by the various bonus projects I would start on my own. This comic strip was one of them. The original was in color, which I left with him. A few years after I graduated, he was still sharing it with his students.