All the way back in 2006, a strange little project fell into my lap via a friend in the comics biz. It was a sort of horror anthology called Tales of The Spooky.

“The Spooky” was a haunted house attraction somewhere on the east coast. It was scheduled to open in September 2006, and the owner was a comics fan and comic show organizer. I never actually met him, and never heard his name. I can’t find anything online about the place, so I don’t even know if it officially opened. What I DO know is that he hired someone to create an EC-style comic book for and about his haunted house that could be sold there. Which is a cool idea.

My friend (Dave Lanphear) became an intermediary to produce the book, and I was one of several artists he hired to write and draw the content. I’ll jump ahead to the punch line: the comic never got done for reasons that I never learned. I wrote and drew a six-page story and submitted an invoice in July 2006, after which the project collapsed and payment never came.

But I still have the materials for the story, so now it can finally see the light of day. (Sorry if you clicked on this hoping for Pink Floyd…)

When we started, the following springboards were provided to us, based on actual attractions in “The Spooky:”

The Mirror that Showed You
A mirror that gives an image back about life or death advice. But is it advice that’s good for you, or good for the mirror?

The Wall
A wall made from haunted bricks. How many lives are trapped here, and why?

Hangman’s Noose
A rope in the cellar is a guideline for guests to grab and be guided down into the dark, dank depths. Or, rather for it to grab you…

Lord Percy’s Eyes
Ever seen the old-time silver-based photos taken back in the late 1800s to early 1900s? Lord Percy’s photo hangs in the den, and his eyes seemingly follow everyone that passes through his home. Is he a helpful or malign spirit, and for what is he watching?

The Phantom Landlord
He isn’t seen all the time, but if you do see him… you better have your rent paid!

Dolls of a Dead Girl
Nobody knows where each of these dolls came from. All we know is that they were found up in an old trunk in the attic. Don’t play with them though… they walk the house when the lights are out. And they bite.

Blood that Drips Up
You can find blood drops all over this one area, but how does it actually drip up … and why? We clean each night, but we can’t get rid of this trail that goes nowhere. Whose blood is it?

The Creeps
Remember when you last were scared? The attic at The Spooky has an invisible vortex allowing the Creeps to inhabit that tiny space and raise the hair on your body. Beware the Creeps…they feed on fear…!

Cellar Garden
During the Depression era, many people grew their own gardens. Some were even rumored to grow things in their cellars to prevent poaching in the night. Why is the ground in The Spooky’s cellar always fresh and moist…?

For some reason, the one titled The Wall popped out at me. I knew just what to do with it.

Beyond that springboard, the only stipulation was that each story would be framed by a “host” narrator, so I had to leave an empty panel on the first and last pages, to be filled in later.

Here’s the six-page story in full… 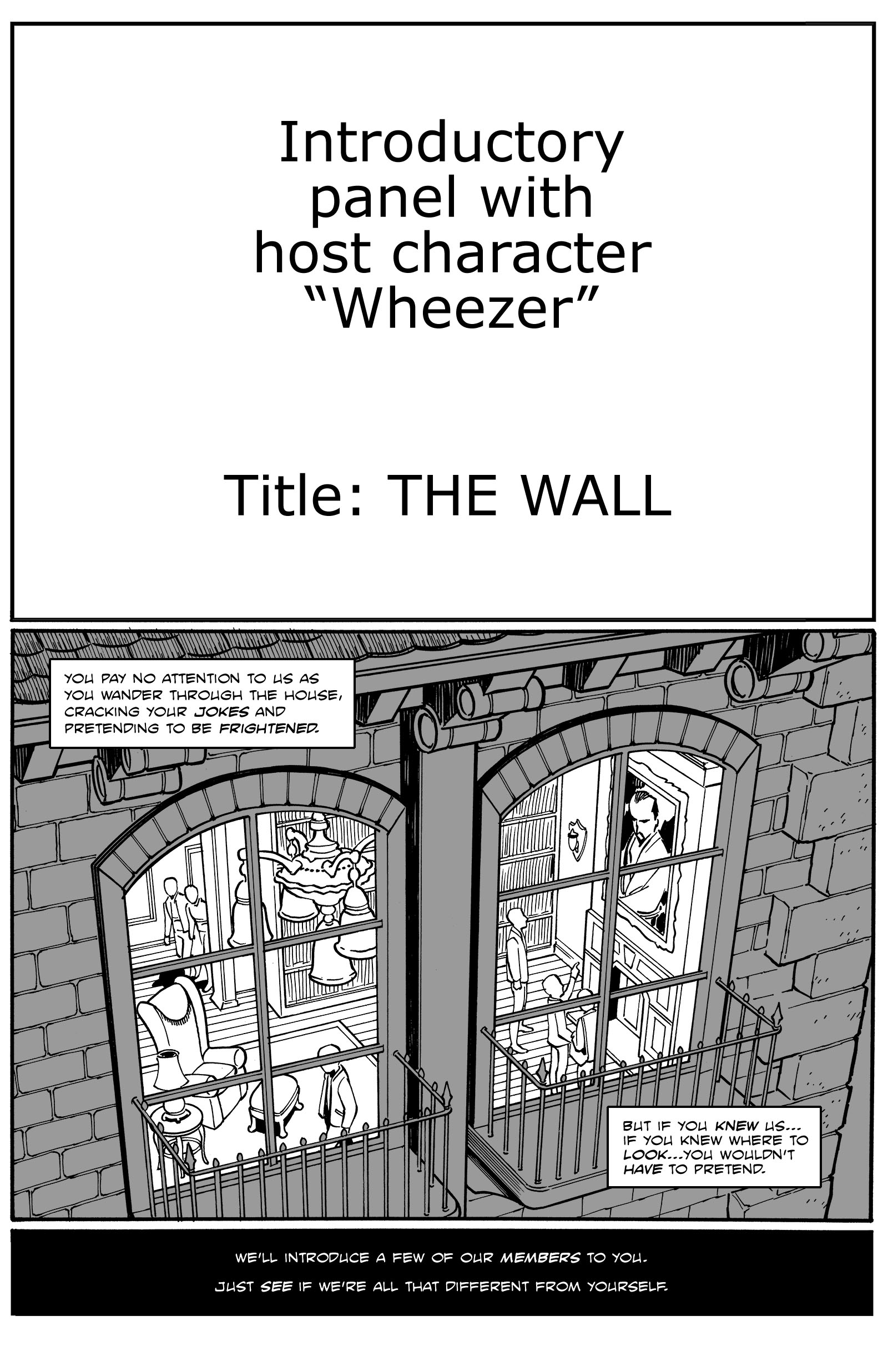 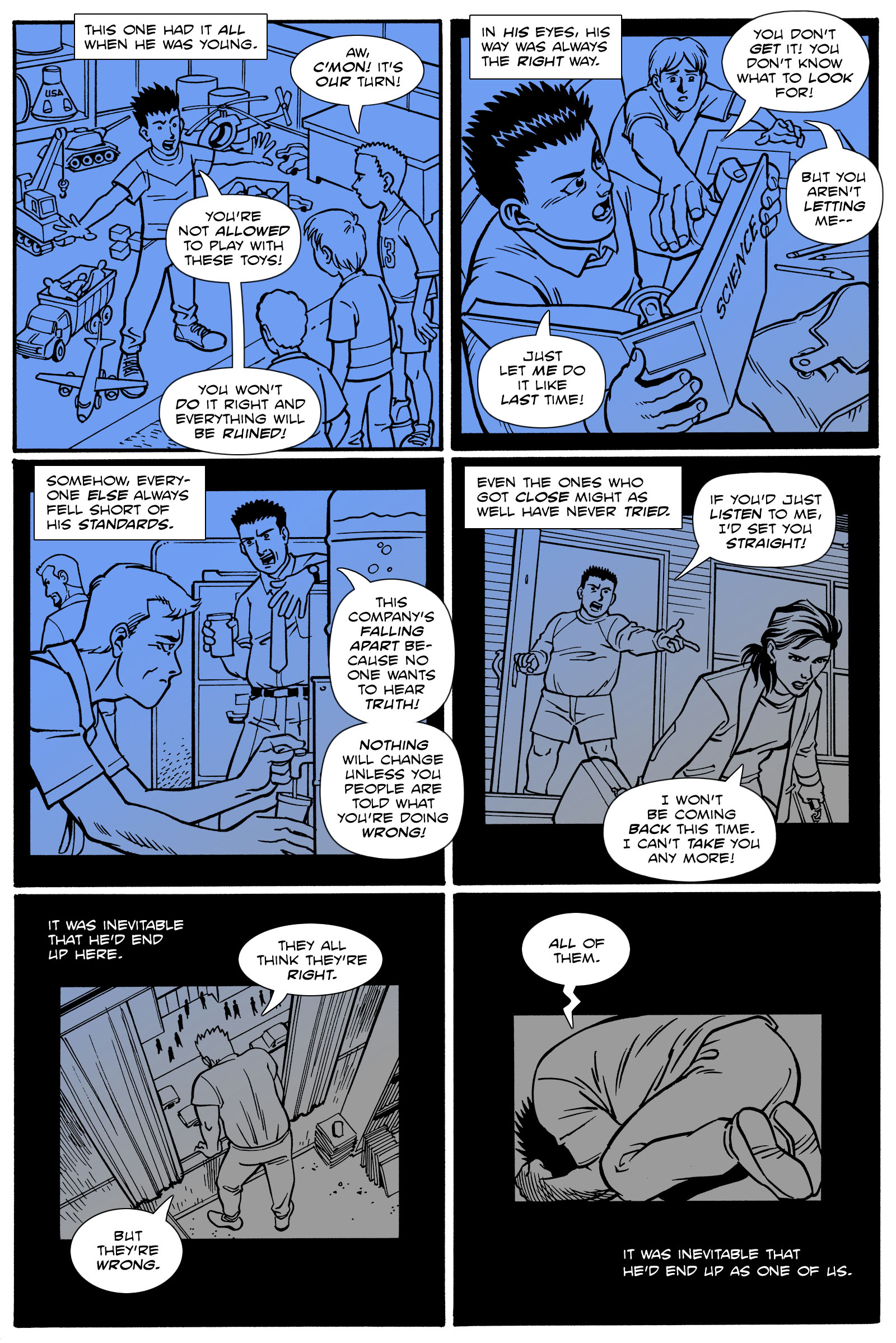 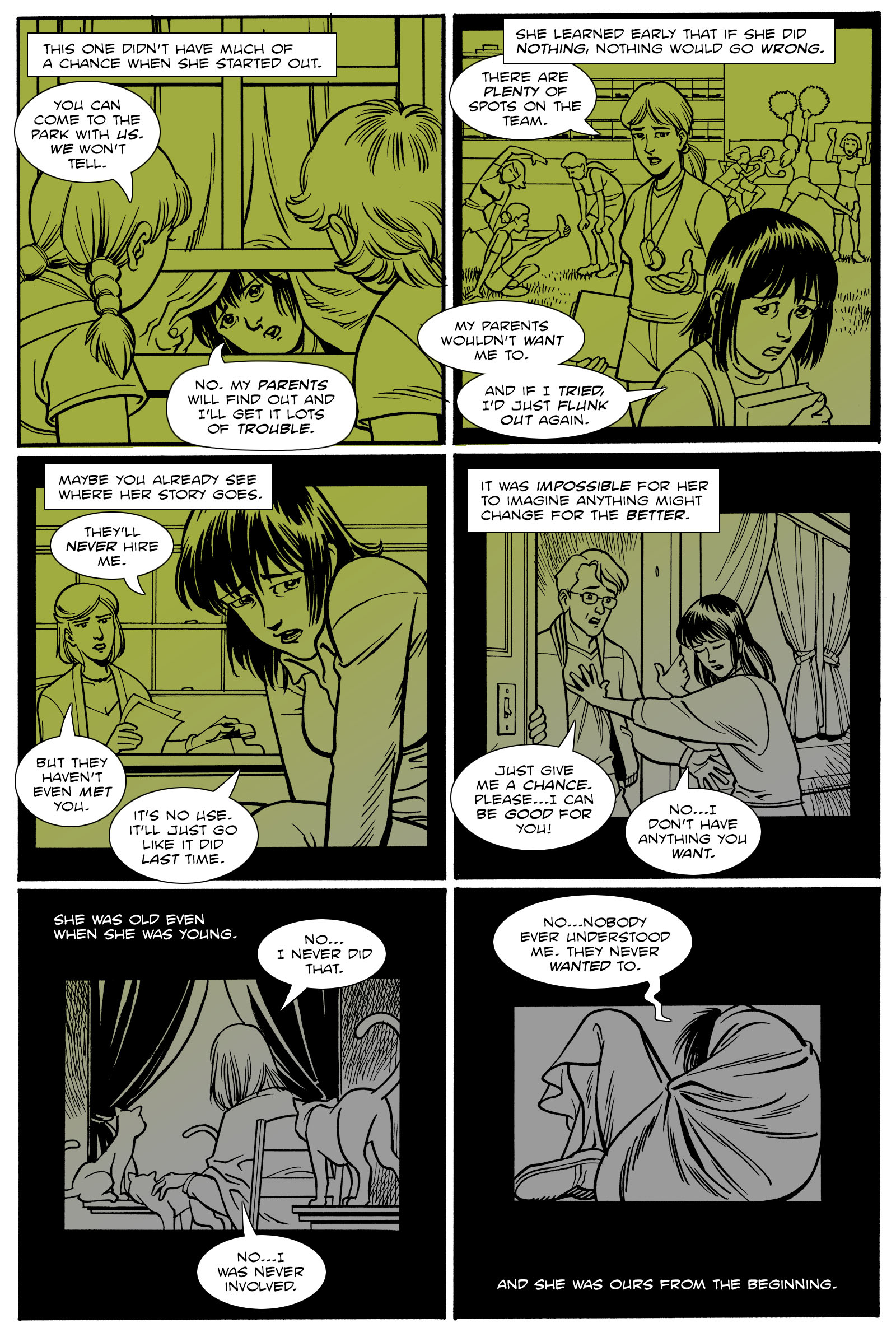 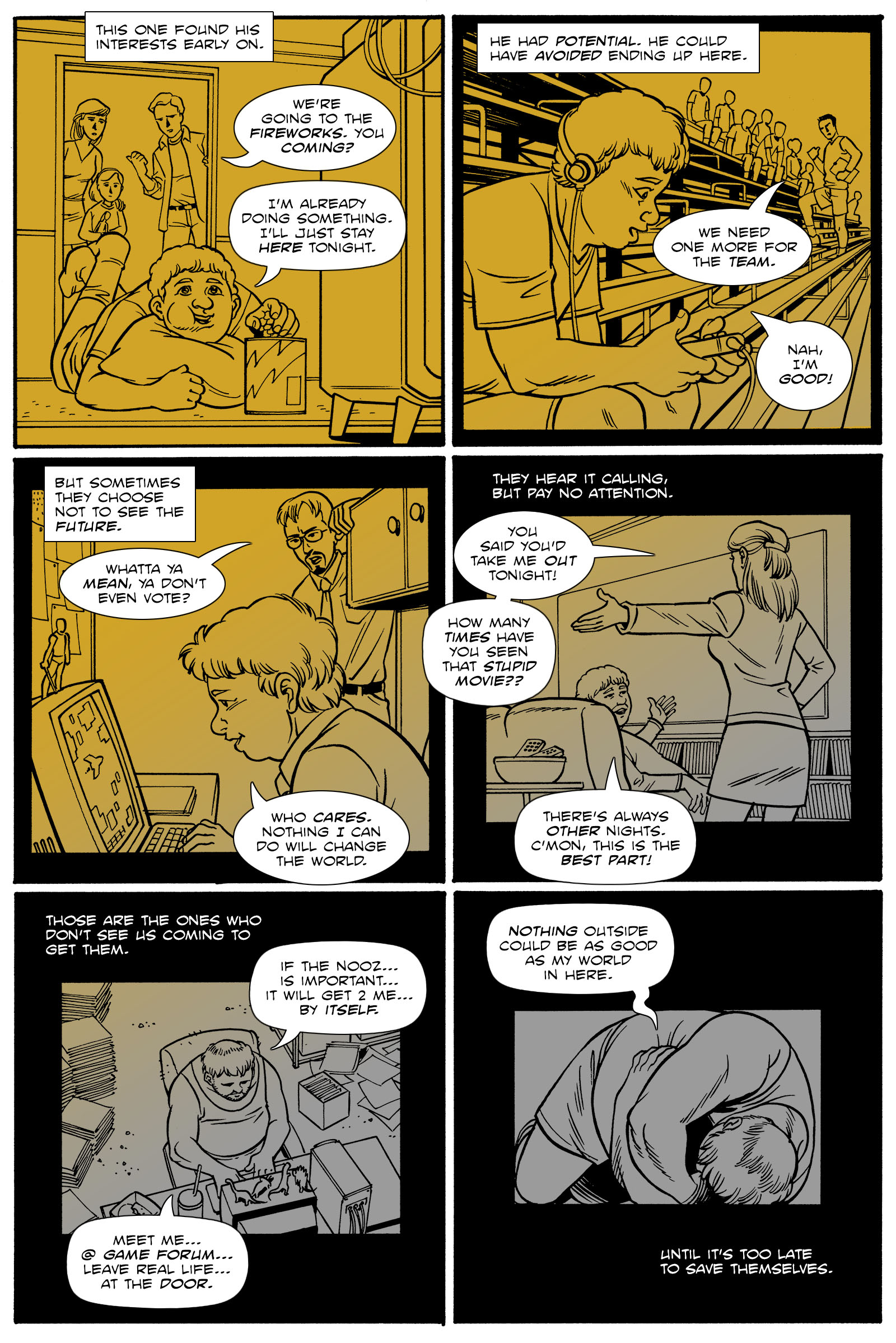 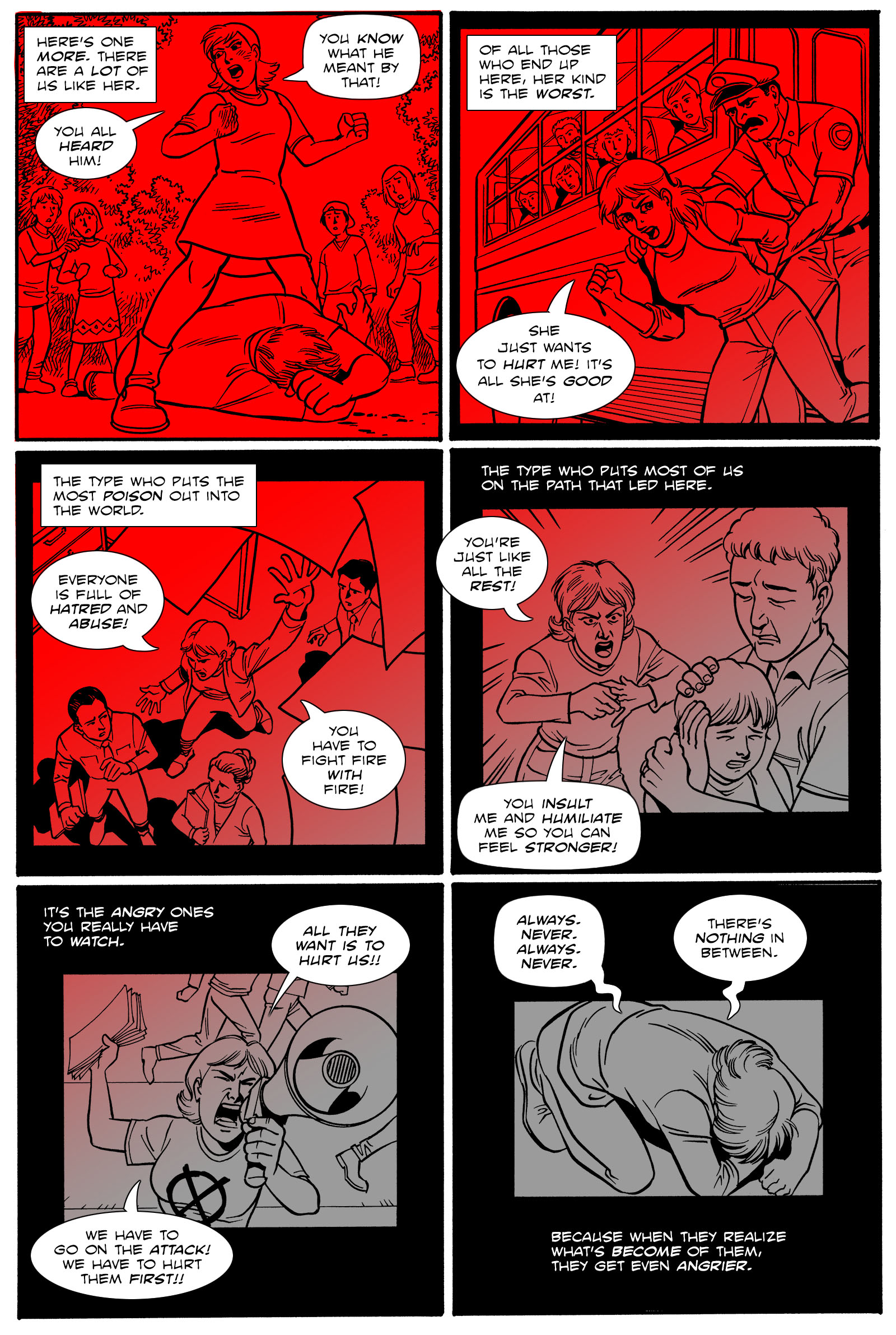 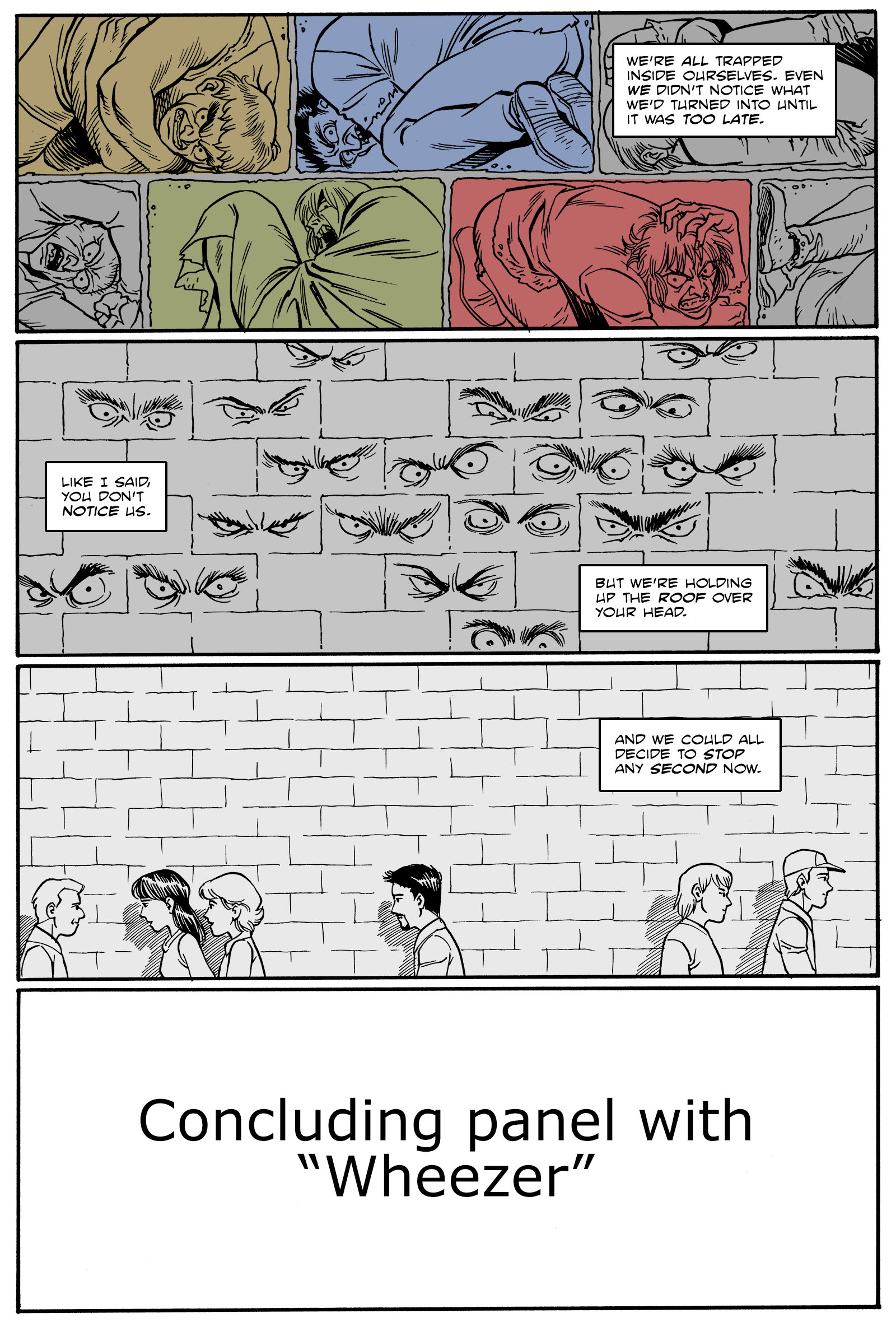 The comic was going to be in color, but unfortunately it didn’t get that far. (What you see above was done just for this article.) So in lieu of fully finished pages, I’ll insert my notes to the colorist as another example of how the Spooky Sausage is made. 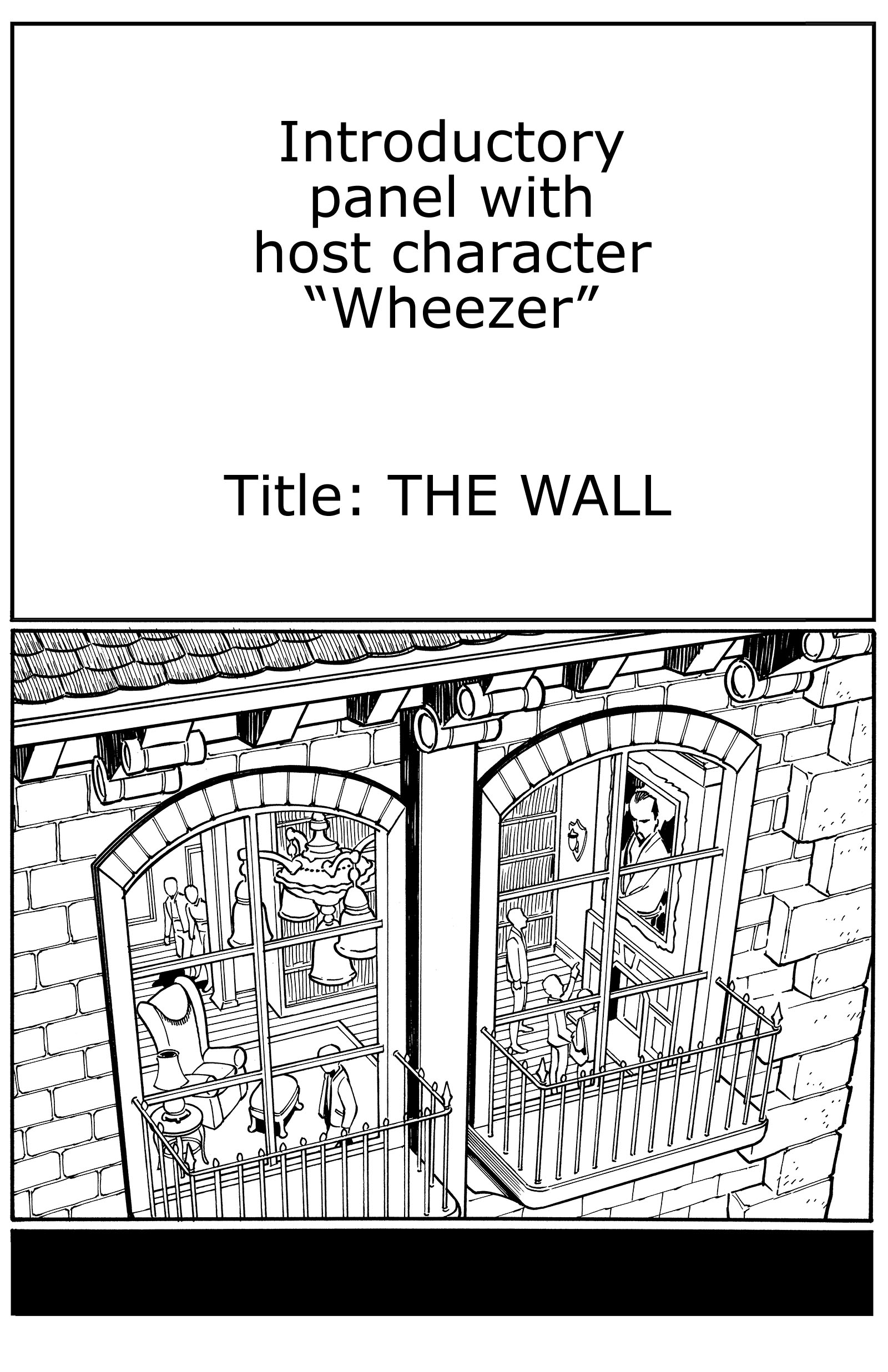 I have no idea what the intro panel is going to look like, so that’s all yours. The second panel is a view into the house. In order to preserve the mystery of who is actually narrating this story, I’d like the house to be lit from inside to de-emphasize the bricks on the outside.

Each of these pages is the life story of an individual who persists in a stubborn form of behavior that ultimately turns them into bricks. As you can see, the panel borders get thicker, closing in around the person until they are trapped in a brick shape. I’d like the first panel of each page to be colored normally, then gradually thin and desaturate the color panel by panel until it’s all grey tones in the last panel to match the grey bricks on pages 1 and 6. If you’d prefer to go red with the bricks that’s okay, too, but I think the contrast will be stronger if you use greys. 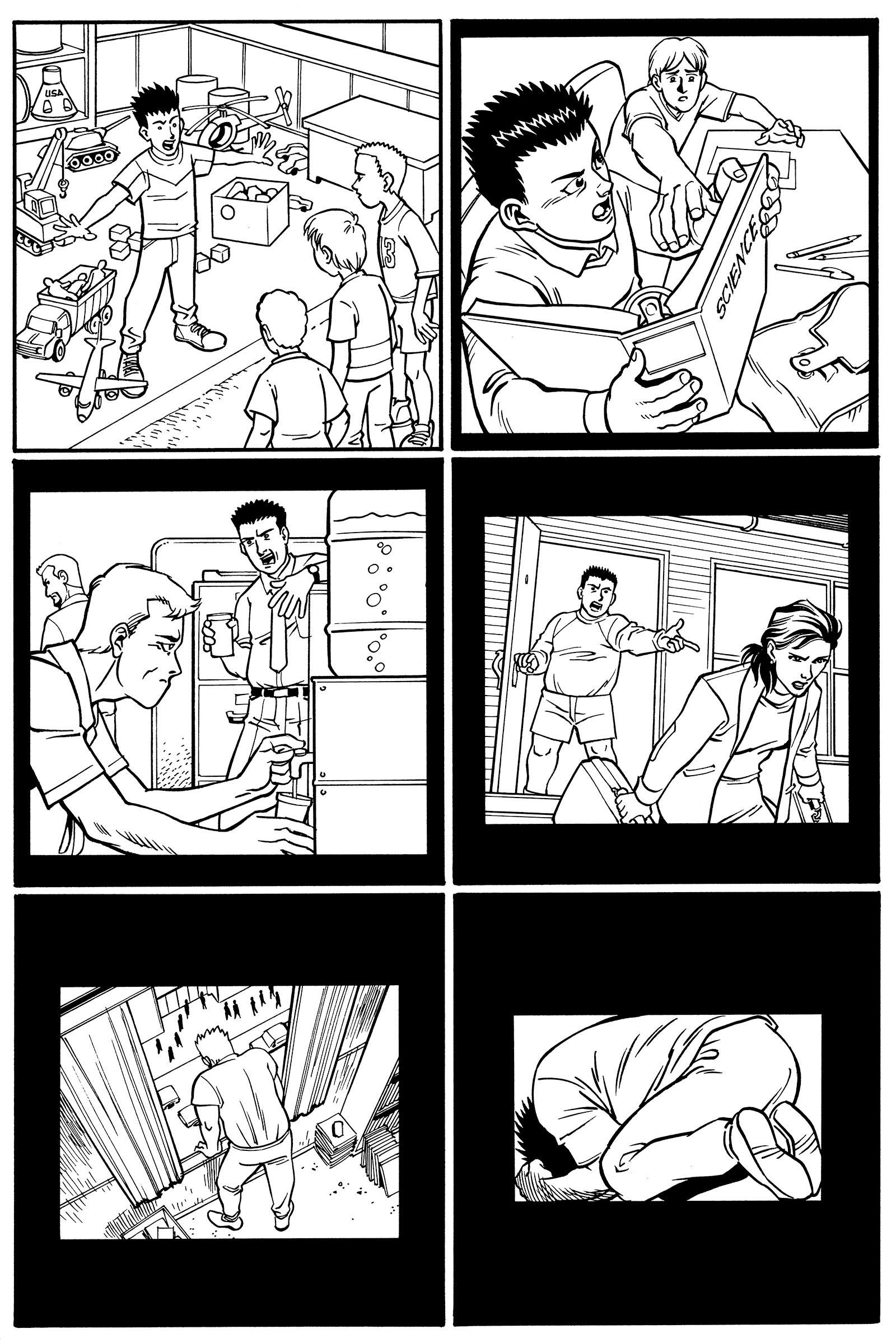 The Life of Arrogant Man
This guy thinks he knows it all. His wears strong, solid colors where everyone else is in more subtle tones. The only lighting cues I have are in panel 4 (light comes from inside the home) and panel 5 (light comes in through the window). 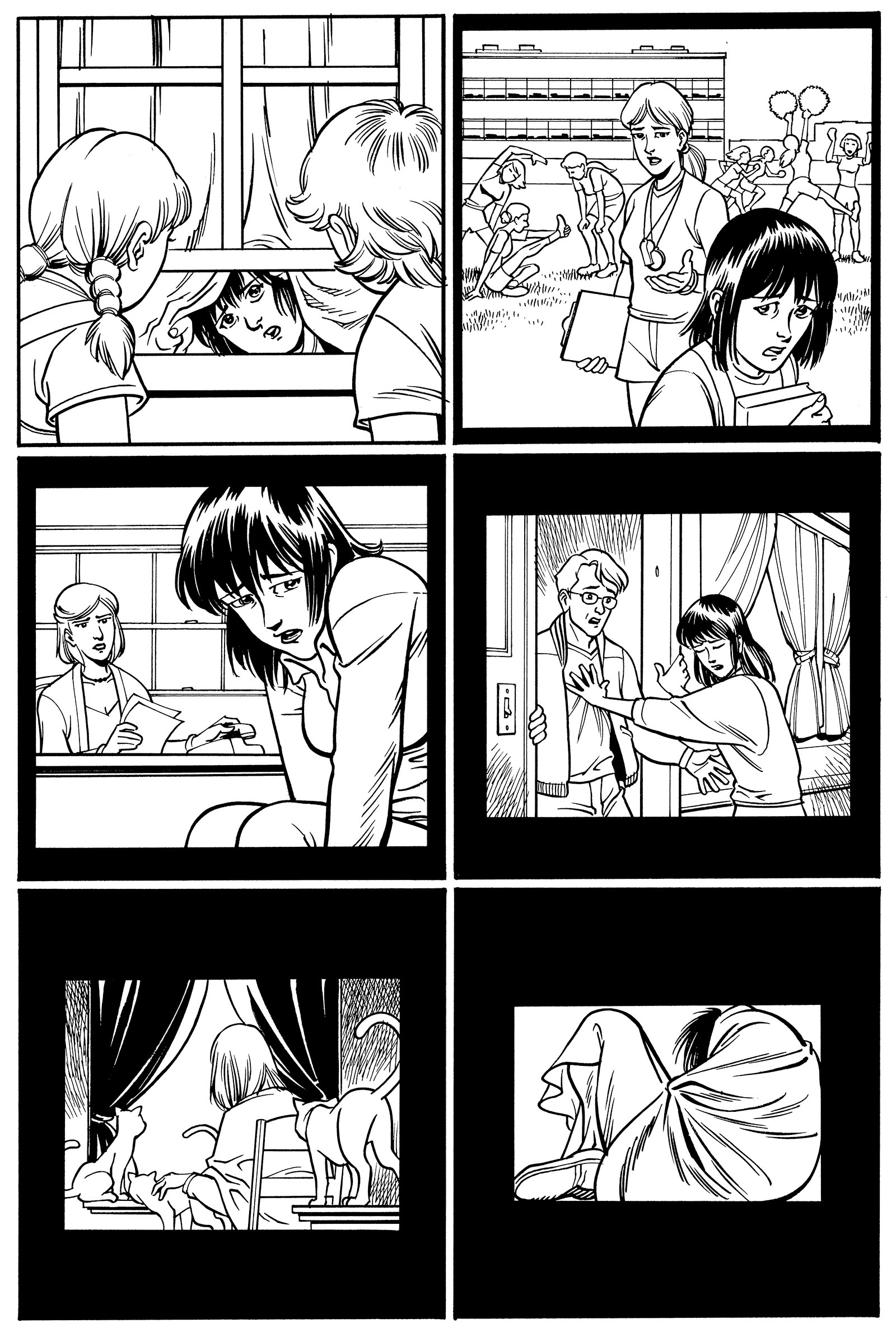 The Life of Fraidy-Girl
She wears drab colors, has greasy hair and pale skin. Lighting cues: in panel 4 I think it should be night outside the house. In panel 5, light comes in through the window. She’s older here, and her hair has gone grey. 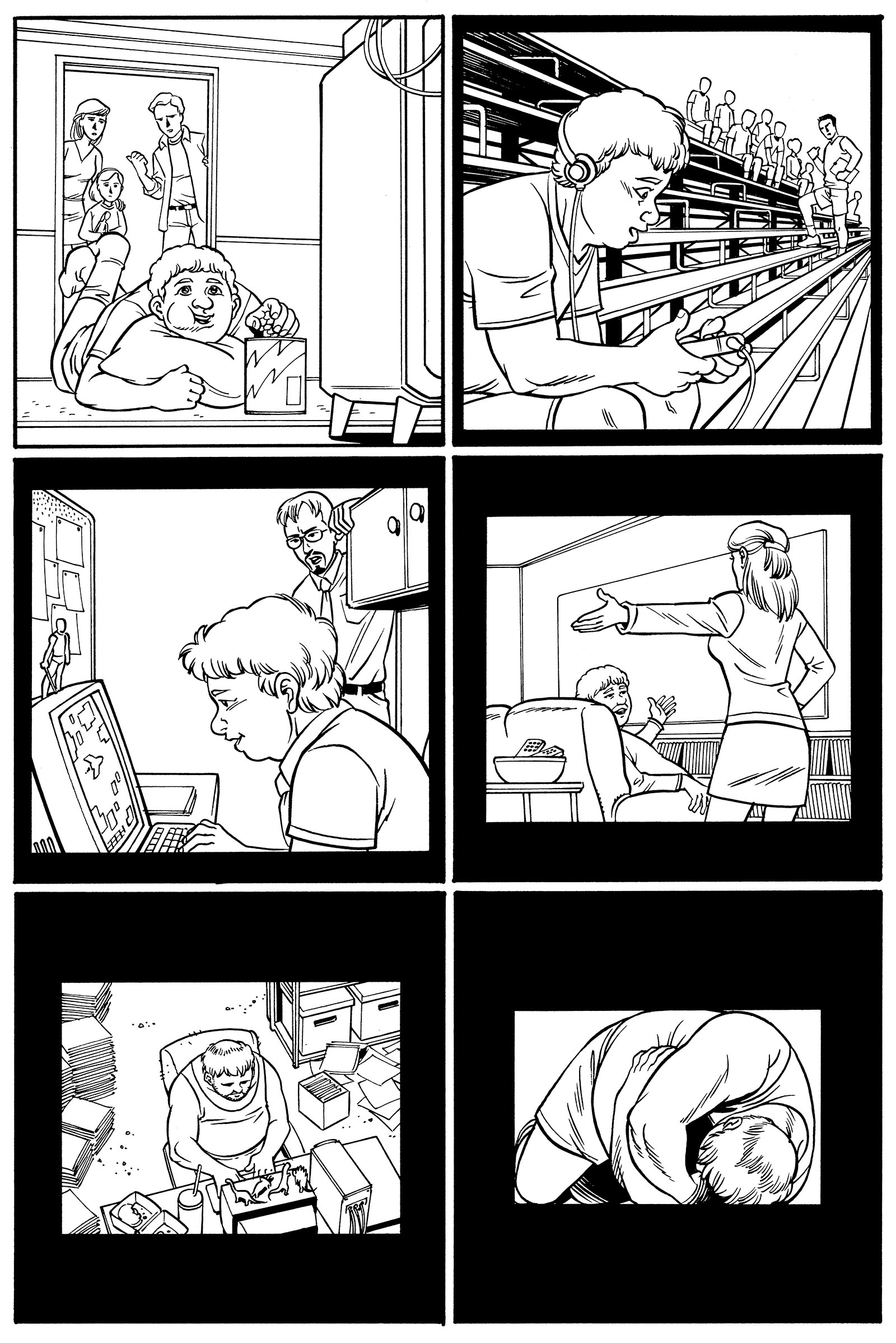 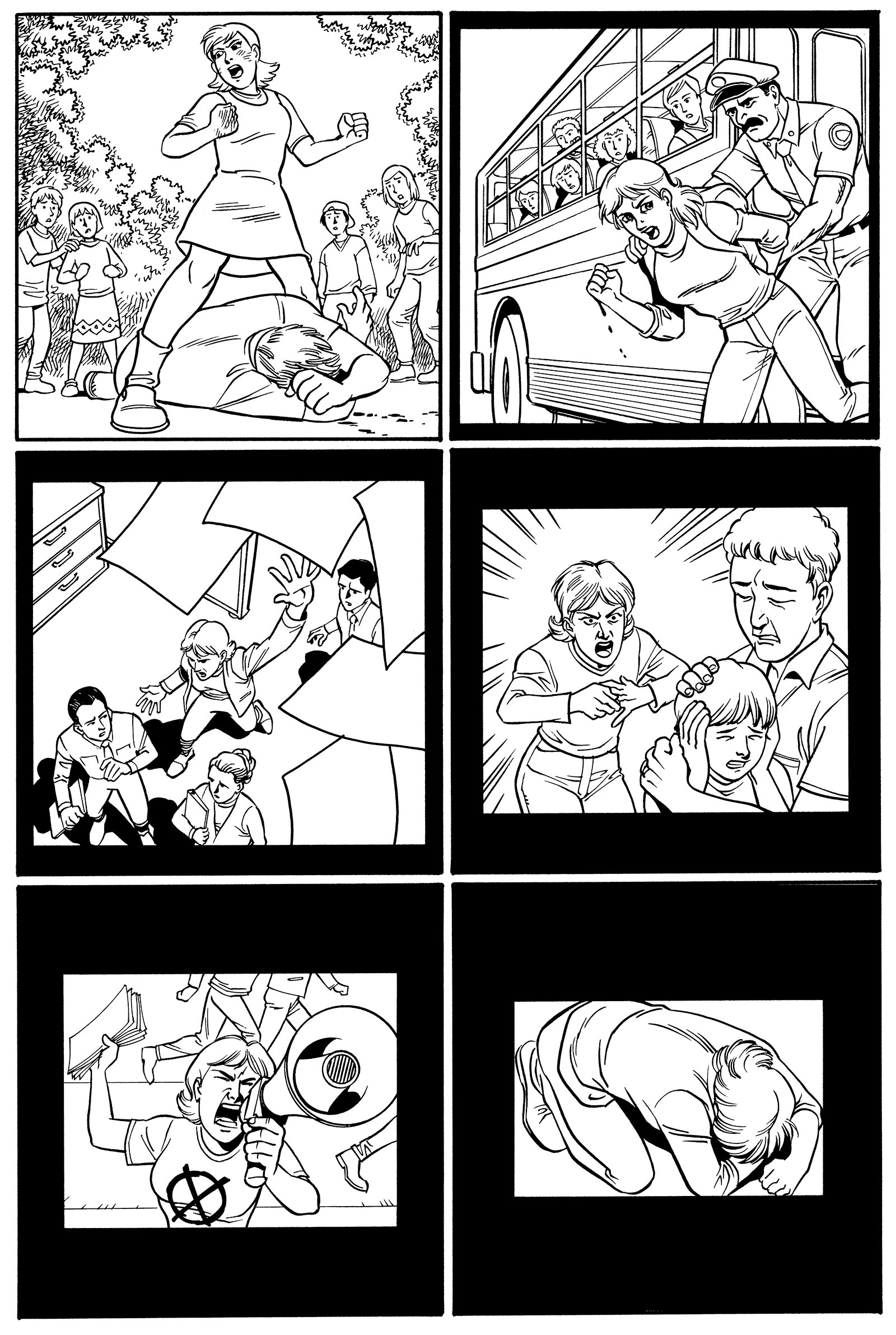 The Life of Anger Woman
She should probably have red hair to match her temper and polarized clothing colors to match her polar attitudes. In panel 1 I’d like to see the sun placed right behind her head so she can be backlit to give her more stature. BG trees should be blurred out. In panel 2, she’s being helped off a school bus by the driver. Blood drips from her fist. In panel 4 she’s tearing off her wedding ring. The boy in the foreground should have her hair color. In panel 5, she can be lit from behind again to match panel 1. 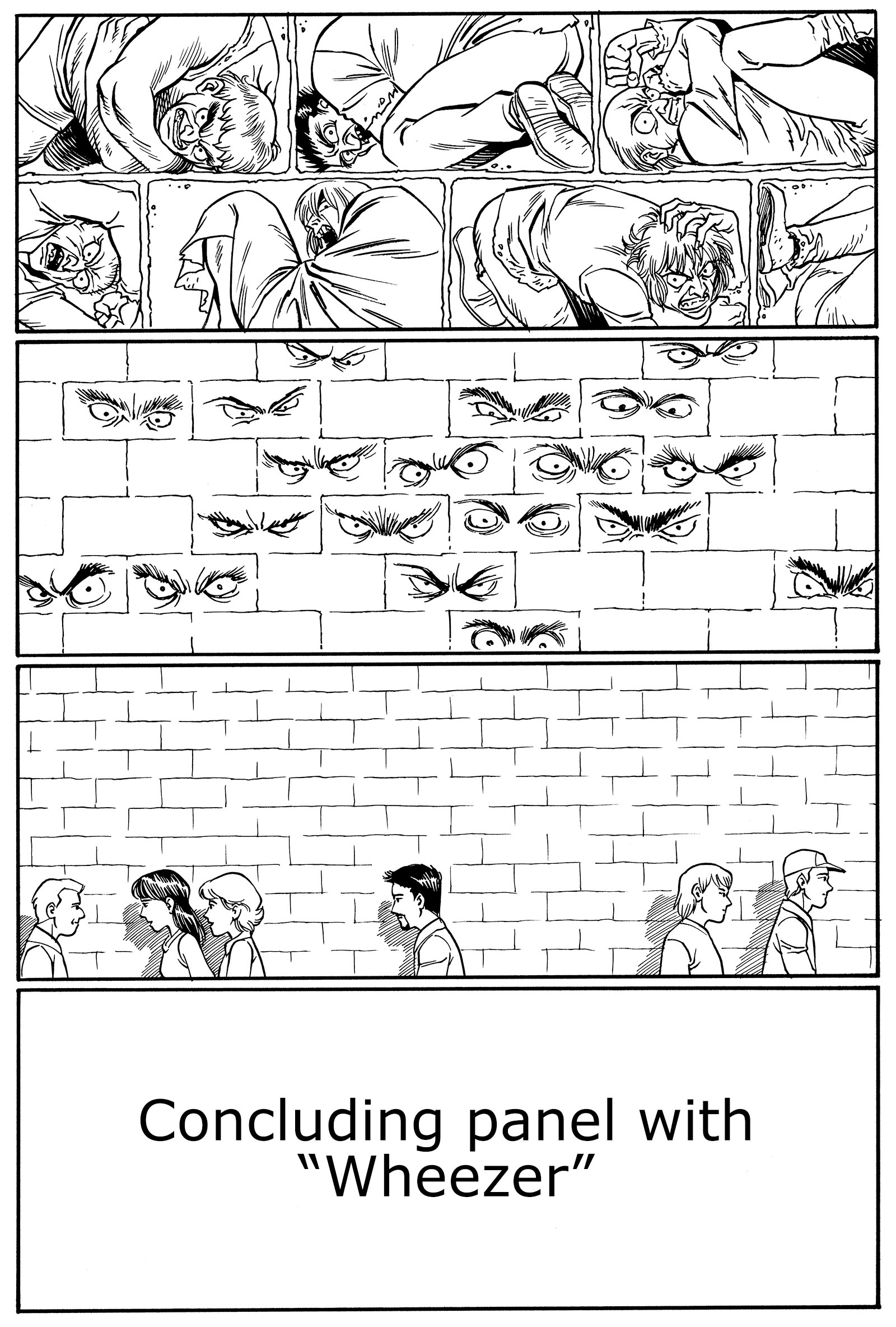 This where it ties together. In panels 1 and 2, the images of the trapped souls should be knocked back so they actually look like they’re contained in the bricks rather than sitting on the surface. You can either blur them or use self-color lines or both. I’ll leave it in your capable hands. Please use bright colors on foreground characters in panel 3 for maximum contrast.