Revolution! This is the halfway point in the story, in which a major event pivots Broid’s rebel group into a new paradigm. And it wasn’t even one they planned. All it took was one oversight on the enemy side to shift the ground under everyone’s feet.

As an anime viewer in the 80s, I became increasingly aware of a pattern in the TV shows I collected. Right around the midpoint of a series, there would be a major turn that upped the stakes and reset the playing field. Later, I became aware that this was often done to bolster ratings and keep the audience hooked for the second half. Speaking as a viewer, it was often the most exciting moment in the story. Which made it the hardest to pull off. 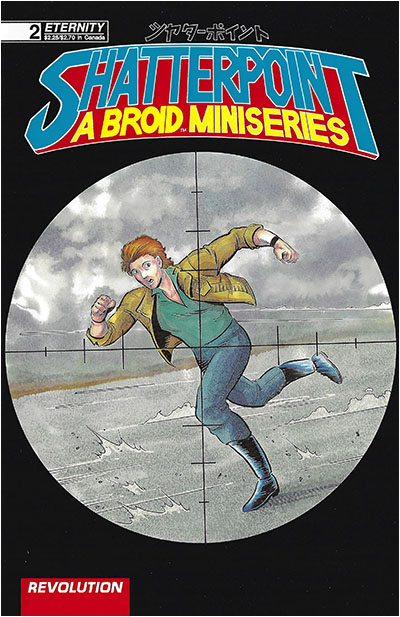 When I was developing BROID, it was the first time I let a story stew in my head for months on end, writing down every idea that came to me and allowing them to build on each other, using my brain as a vehicle. That’s really what it felt like, ideas expressing themselves through me, pulling me along a creative path. It still feels like that when I develop a story today. It’s intoxicating, and I want to keep doing it forever.

The result of this process was that certain big events emerged as moments that would push the story forward. They couldn’t happen in a vacuum. They had to be earned by weaving plot threads that would get me there. Step 5 couldn’t happen unless step 4 happened first, and on backward to step 1. The real-life equivalent of that is when you consider something important that happened to you, and trace the steps backward to the initial cause, which could have occurred years earlier. All the most significant moments of your life are preceded by many steps.

When a story has “good bones” it holds up to repeated viewings. That was my goal above all; to write a story that could reveal new things in a subsequent reading. When the bones aren’t there, you can instinctively feel it. Every time you’ve watched a movie and walked away thinking it sucked, that’s what was wrong with it. Bad bones.

The engine of the events is Shadlin, who fancies himself the architect of his entire world. He and his A.I. partner Episcopus have calculated every aspect of it to ten decimal places. These equations reduce human beings to players on his game board, and he amuses himself by manipulating cause and effect. But he has the same blind side as all toxic bosses that came before him.

In the first BROID series, he pitted his two most powerful servants (Satsuma and Struyk) against each other in the plot to capture or eliminate Aaron Broid. Their competition escalated until Struyk’s mind snapped from the stress (hence the amnesia). When he was unexpectedly taken out of the game, other pieces shifted positions. In this issue, Sef is caught right in the middle, and suprises everyone – including himself – by getting out alive.

It’s easy to summarize that now, but it took a lot of thought to put all the mechanisms in place for it. They had to work backward and forward. And when I finally got to draw this issue, it was pure pleasure to finally bring them to life. After this, we move into the second half where it all pays off. For me, this was where the rocket had cleared the tower and I was in flight. For how long, I could not predict.

When I look back at BROID now, over thirty years later, there isn’t much I would do differently on the writing side. In developing this story, I discovered a reliable process that showed me how to create a solid foundation. I would script it differently today, but the plot wouldn’t change at all. As I revisit the art, though, I have to conclude that the inked version that finally got published is probably the weakest. There’s so much more life and texture in the rough version, that’s the look I’d go for if I were to redo all of this today.

Page layouts and compositions would change for sure. Some of it still works fine, but the lessons I’ve learned in the intervening years would vastly improve the presentation. In the interest of sharing those lessons, I’m gonna take 25-year-old me back to school. The subject for today is perspective. 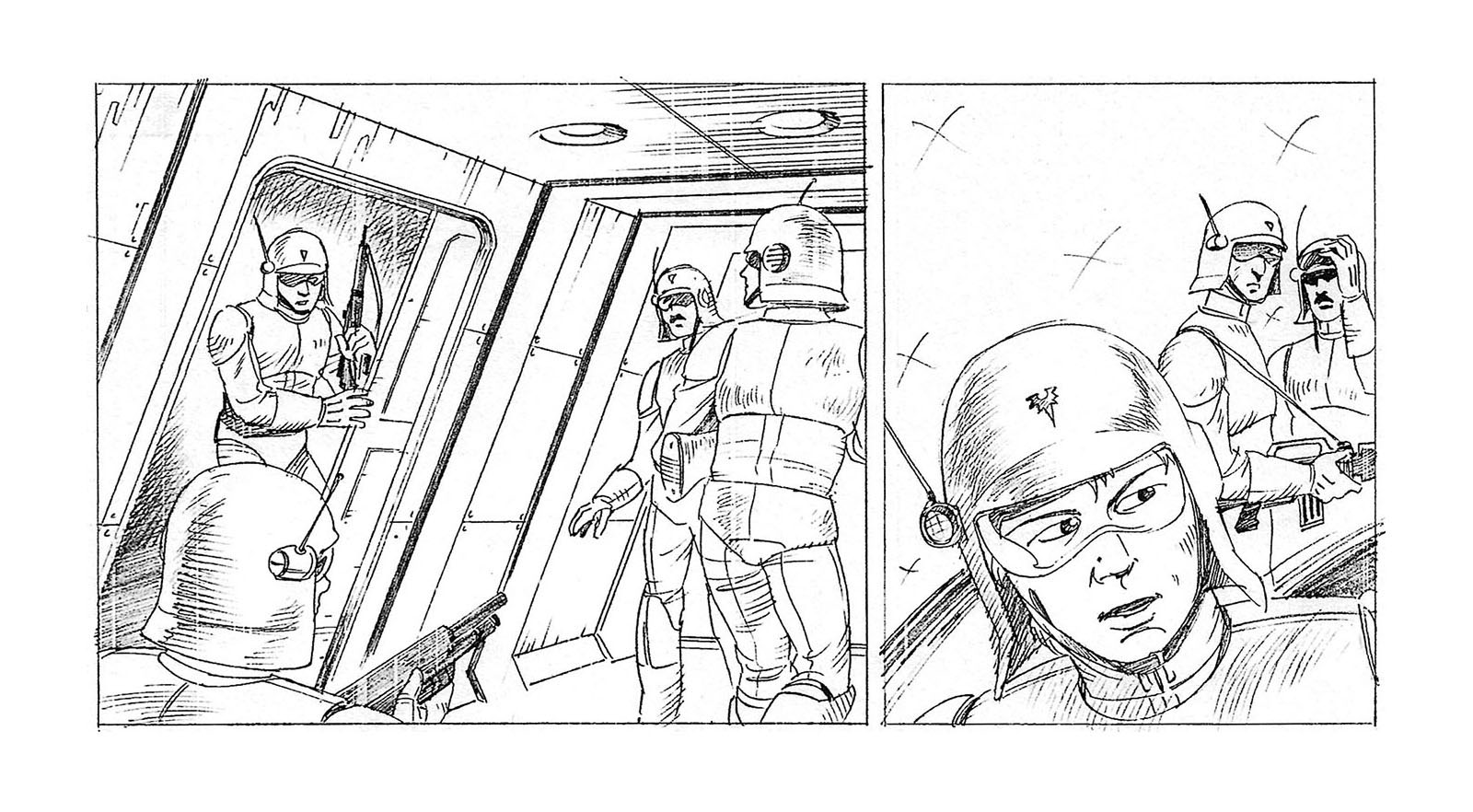 Something I did far too often back in those days was to lose sense of positioning when cramming characters into a panel. I didn’t think hard enough about how shots like these would look in real 3D space. In both of these panels, the character in the foreground is way too low. They’d have to be standing in a hole to end up in that position. 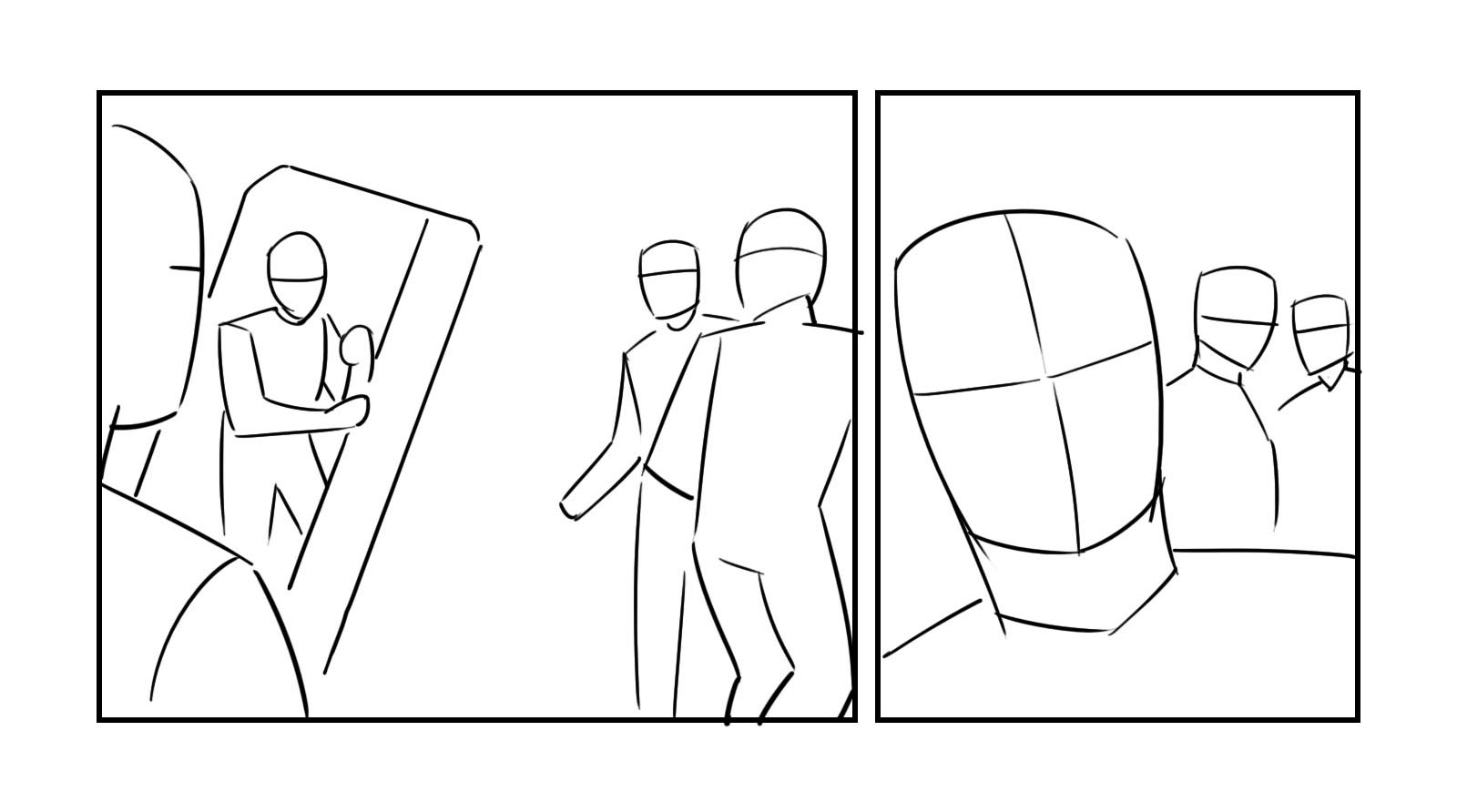 Here’s how they should be positioned. The background wouldn’t need to change, but the characters would be much higher in the frame. The rule of thumb for grouping characters together like this is to put their eyelines at or near the same level. Unless one is significantly taller or shorter than the rest, they’ll mostly be eye to eye. 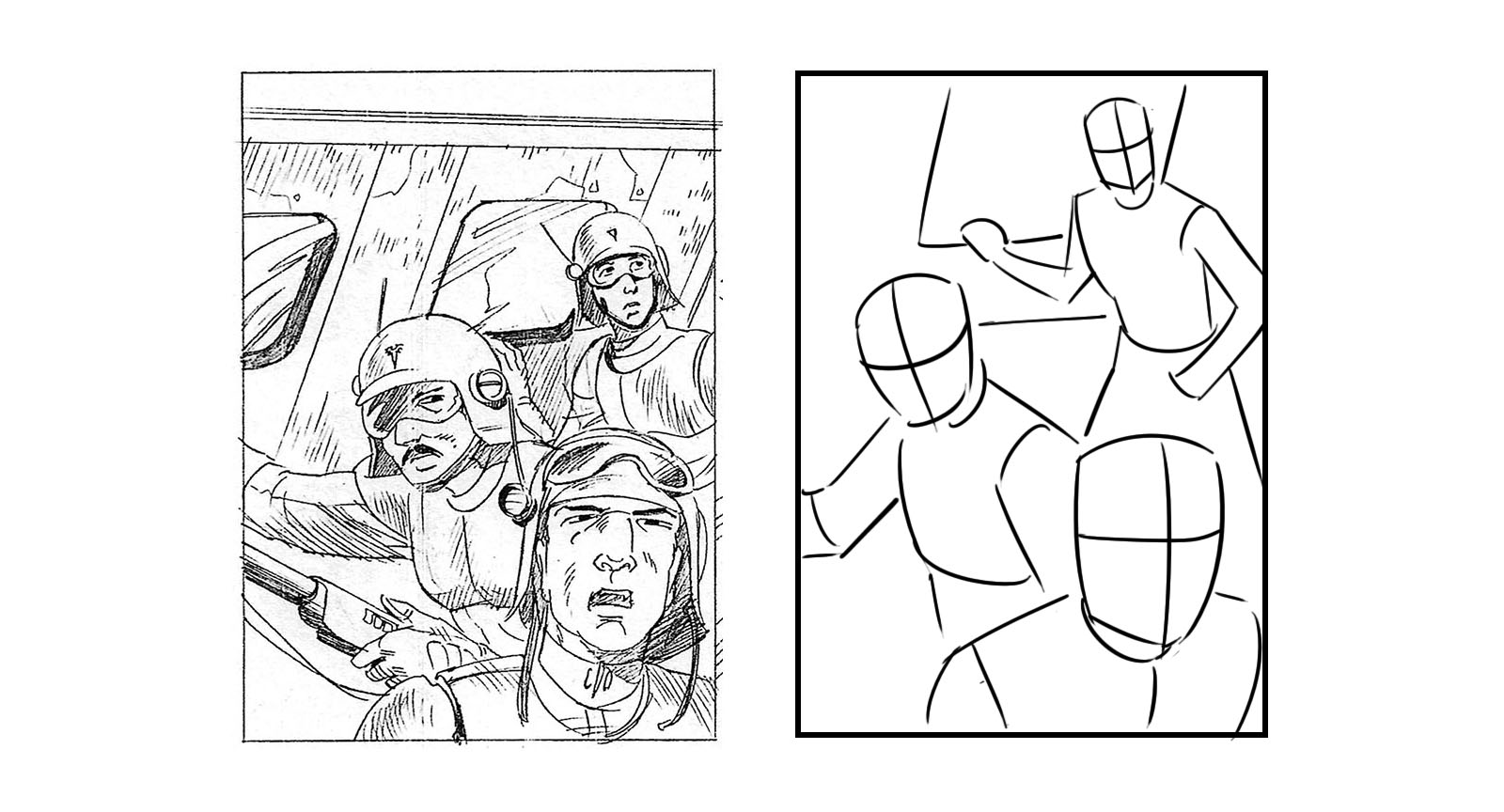 Here the problem is repeated and doubled by the position of the background elements. In the sketch at right, the camera has been lifted higher up and you can see how adjusting the angle helps everything fit together more realistically.

Once again, the foreground character is too low, and we don’t have any evidence that he’s sitting down. The solution (at right) is to lift the guy up and deepen the perspective of the background.

Another example of the same thing. The foreground guys are too low, especially the one on the left. Raising them up in the sketch at right corrects the perspective. In this case, their eyelines are higher than the others, which adds depth to the composition.

And with that, school’s out until next issue. 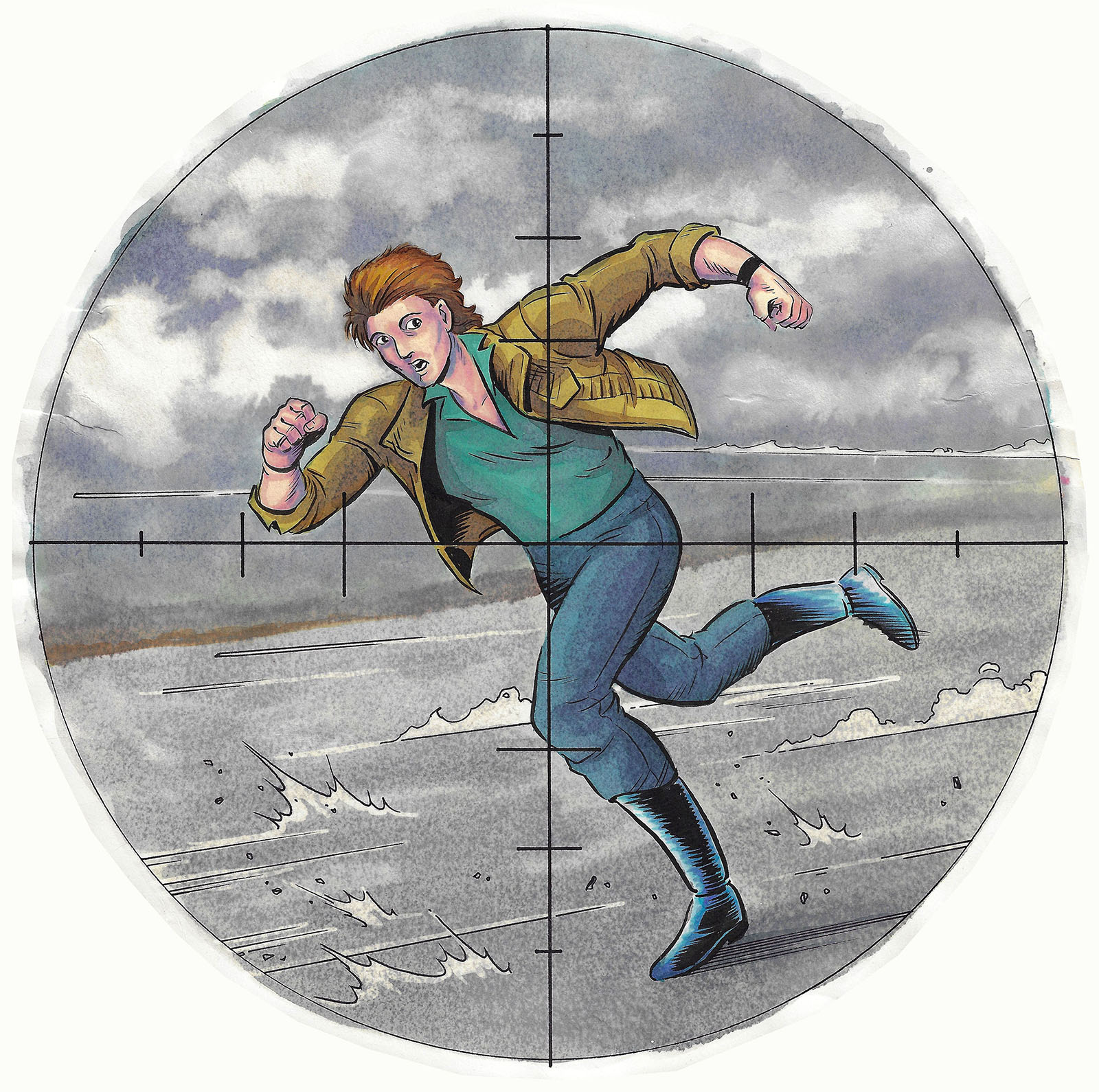