Once you cross the line into drawing comics professionally, assignments can come from places you never expected. This is one of those cases.

In 1994 I was in my second year of working on staff for Malibu Comics. They’re not around any more, but in the late 80s and early 90s they were a scrappy independent comic book publisher that took a chance on me. One of their imprints was called Eternity Comics, and they put a lot of meaningful opportunities in front of me. Over time, it became both a blessing and a curse.

I started freelancing for them in 1989, and when they went into rapid growth in 1992, I was chosen from among their talent pool to join the team. This required a significant move across the country from Michigan to California, which changed my life for good. I’m still in California now (L.A. zone) and have spent more of my life here than in Michigan. I also got to work with a bunch of guys who became great friends. That was the blessing part. 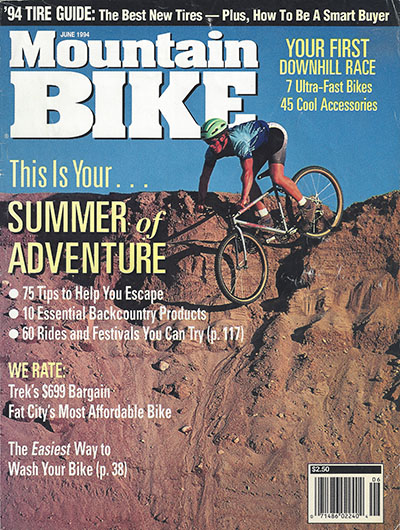 The curse was being inside the meat factory watching the sausage get made. I was an eyewitness to dead-end decisions, critical compromises, the burning of money, and more. At its worst, it was terrifying. Like being lashed to a runaway train, shouting to the conductors and never being heard. I learned a whole lot about adulting in that job and will write more about it on another day. This story is a positive one.

My specific job at Malibu was to run the art department. Our chief tasks were lettering and graphic design with some art fixes and production work thrown in. We also had color designers in our fold, and every day brought a new round of hilarity to balance out the grind.

The other players in this story were three guys in my posse: Dave Lanphear (letterer and artist), Larry Welch (inker), and Albert Deschesne (colorist). From the day we recognized that we shared a bubble within the company, we knew it was up to us to keep that bubble afloat amid rough waters. (SLAMDUNK METAPHOR! How does he DO it??) To that end, we would keep an eye open for freelance projects we could work on together. One day in the spring of 1994, Dave got us one.

It came from a fella named Dan Koeppel, an editor on Mountain Bike magazine. He wanted to create an article that reviewed tires, and he thought a 6-page comic strip would be a good way to catch some eyeballs. He was definitely right – if an unexpected comic strip suddenly pops up in a magazine you’re flipping through, you’ll probably stop and give it your attention.

From here I can let the documentation do the talking. This wasn’t a huge breakthrough for any of us, but it was a nice reminder that a chance to draw comics can come from anywhere. If your dream is to draw comics, every opportunity is worth taking. 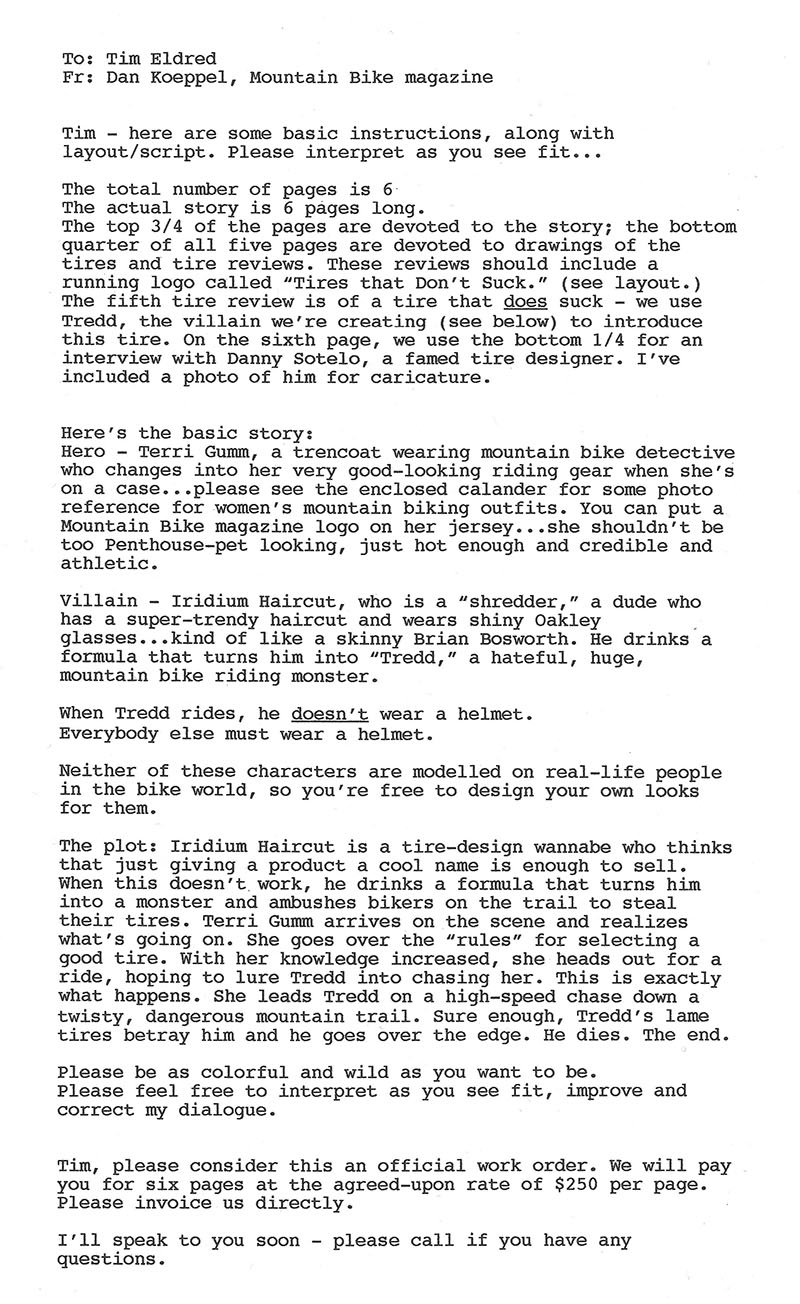 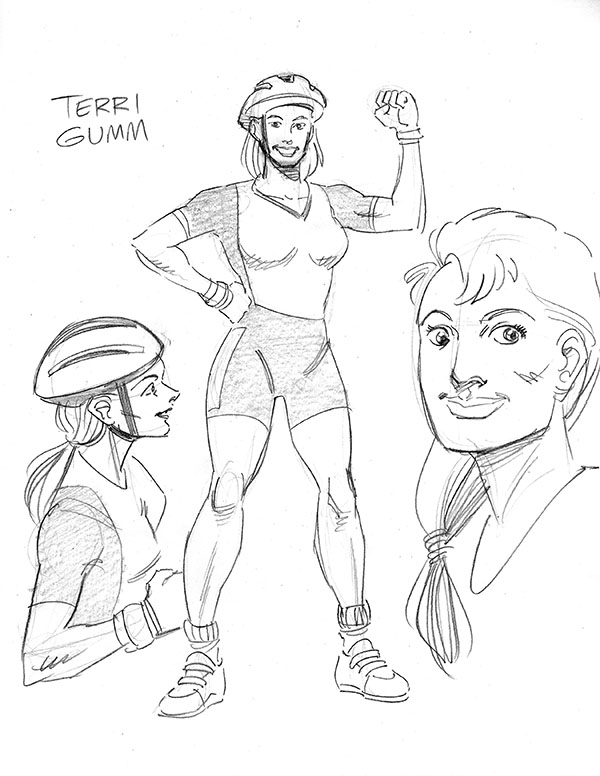 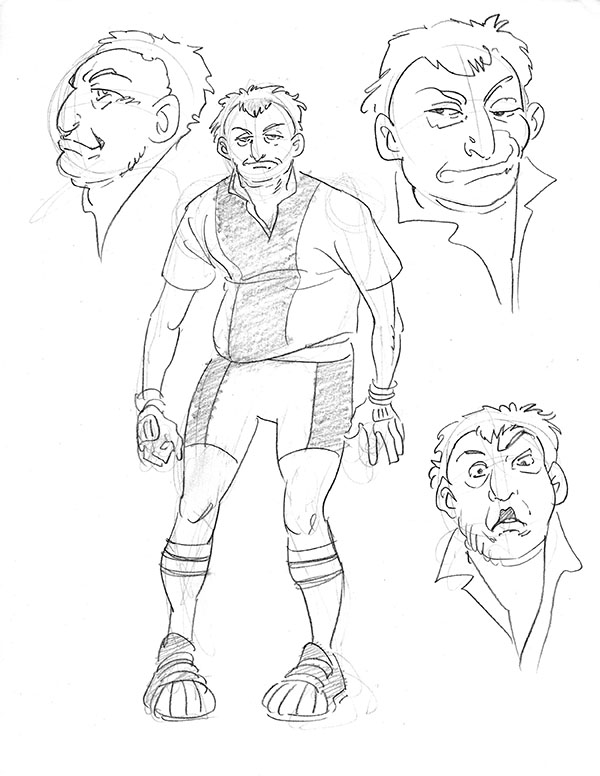 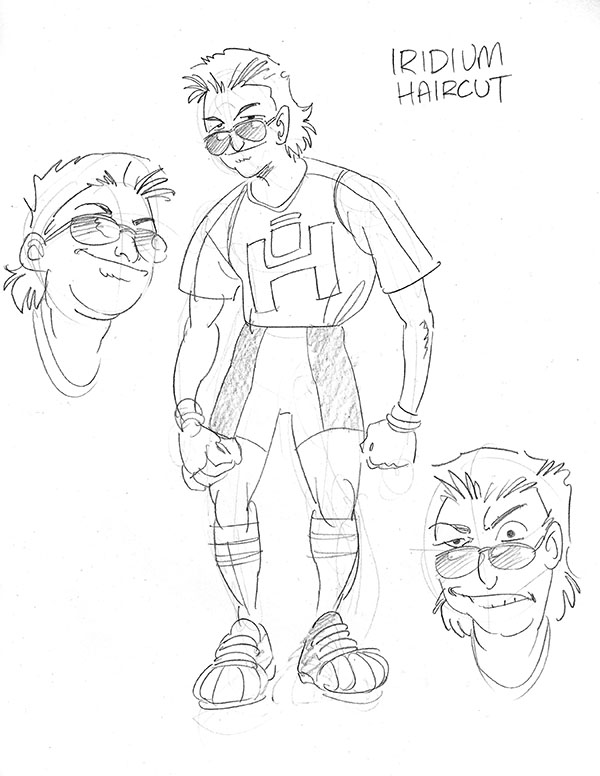 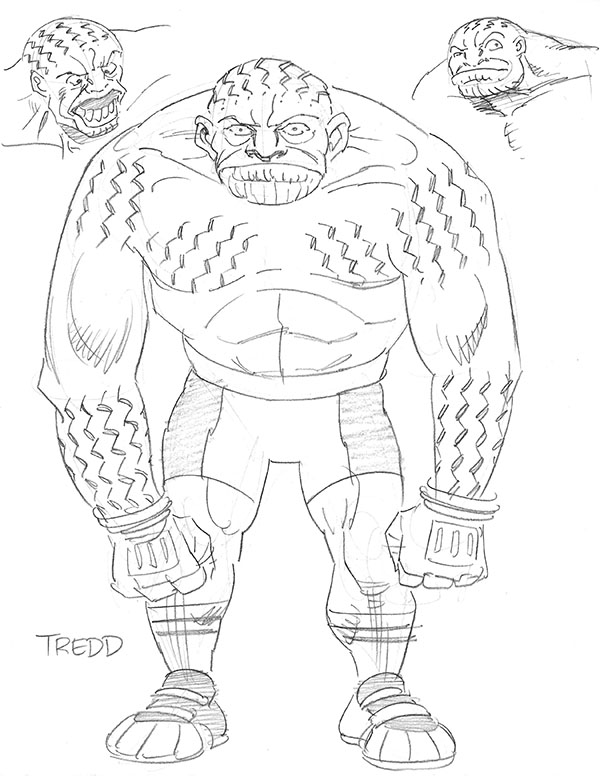 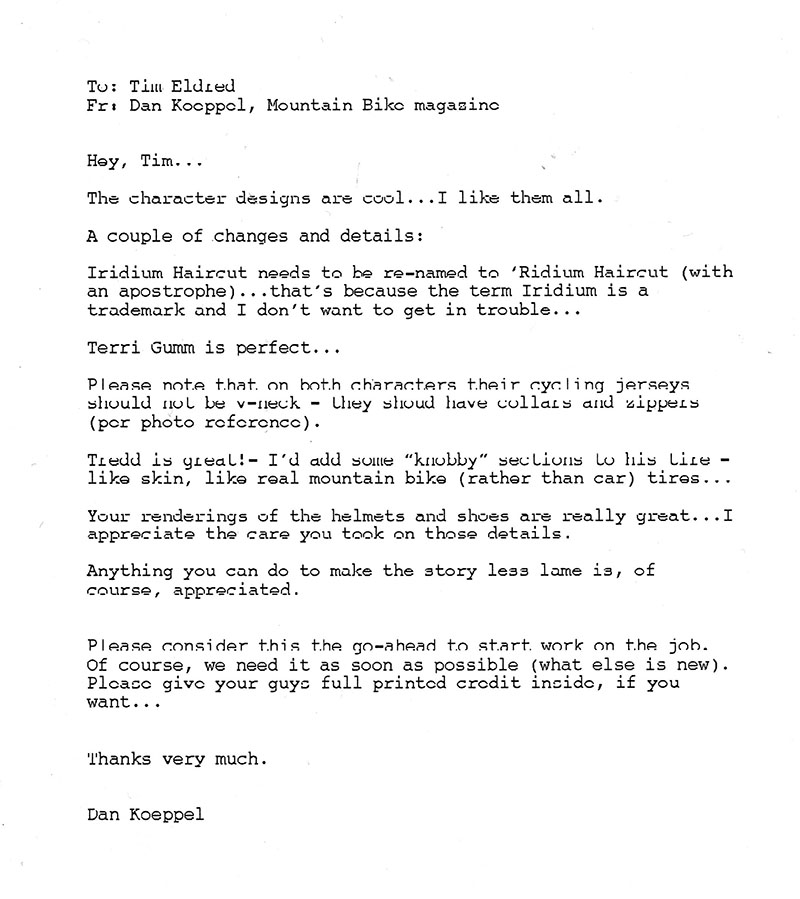 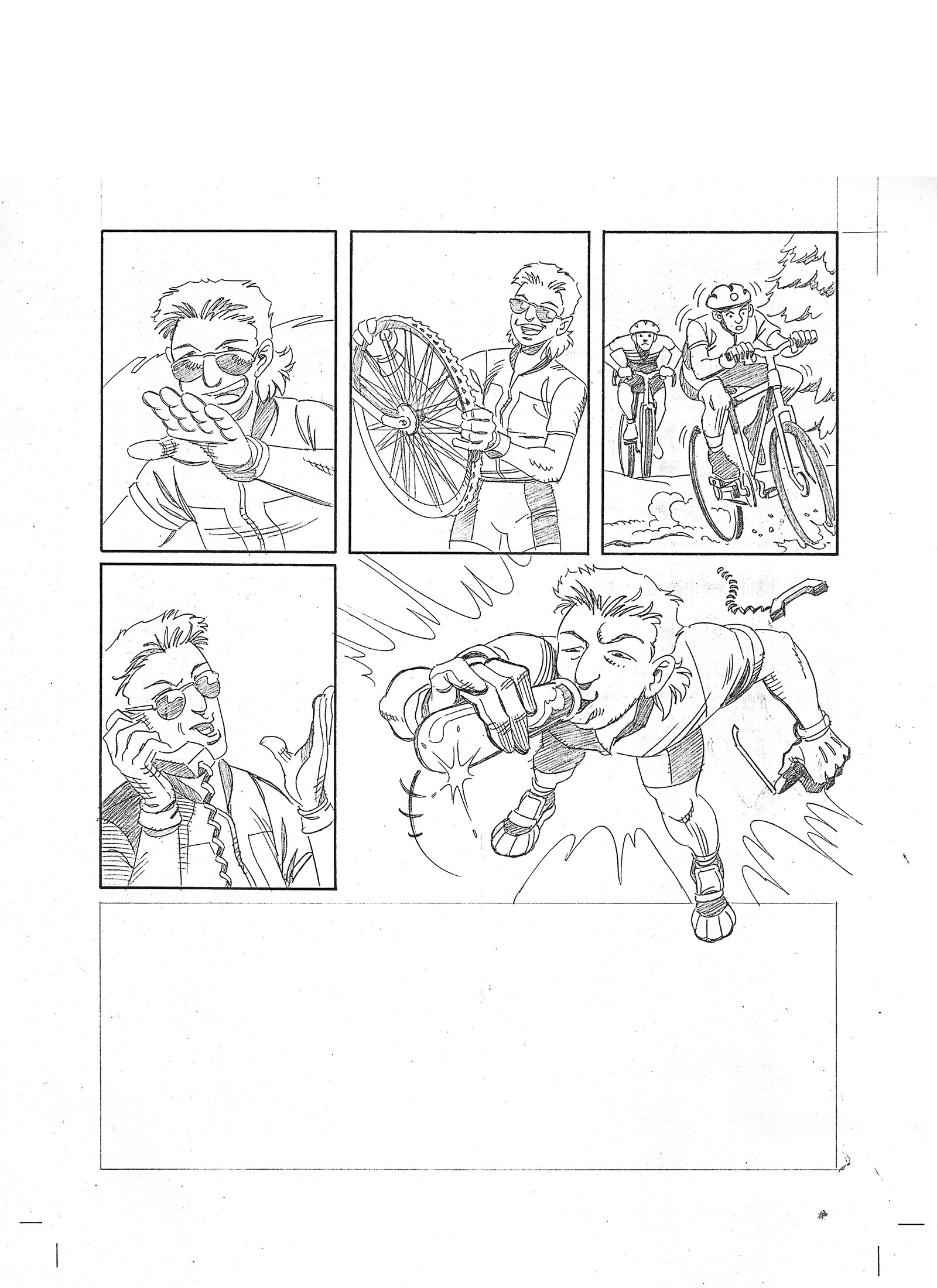 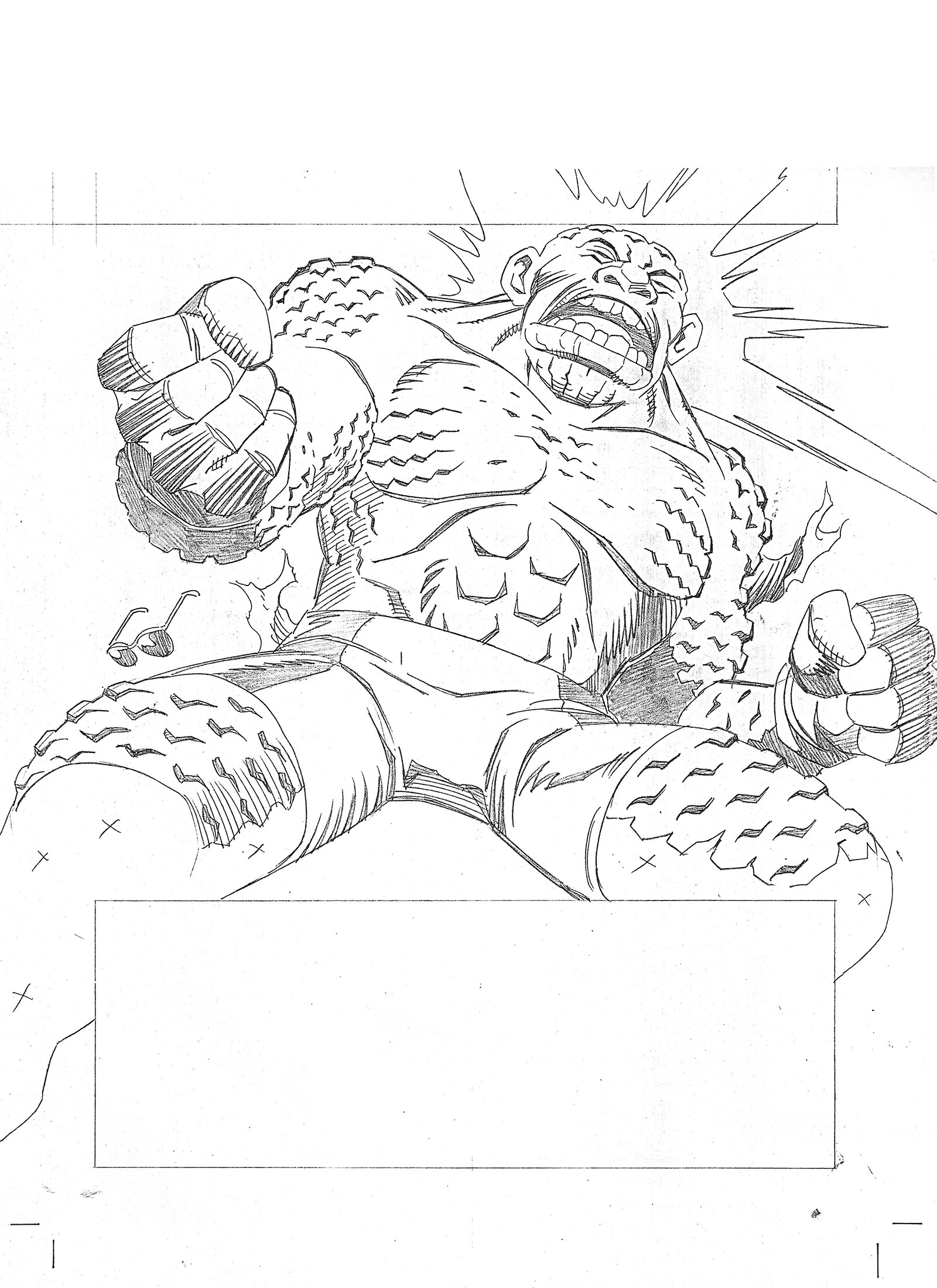 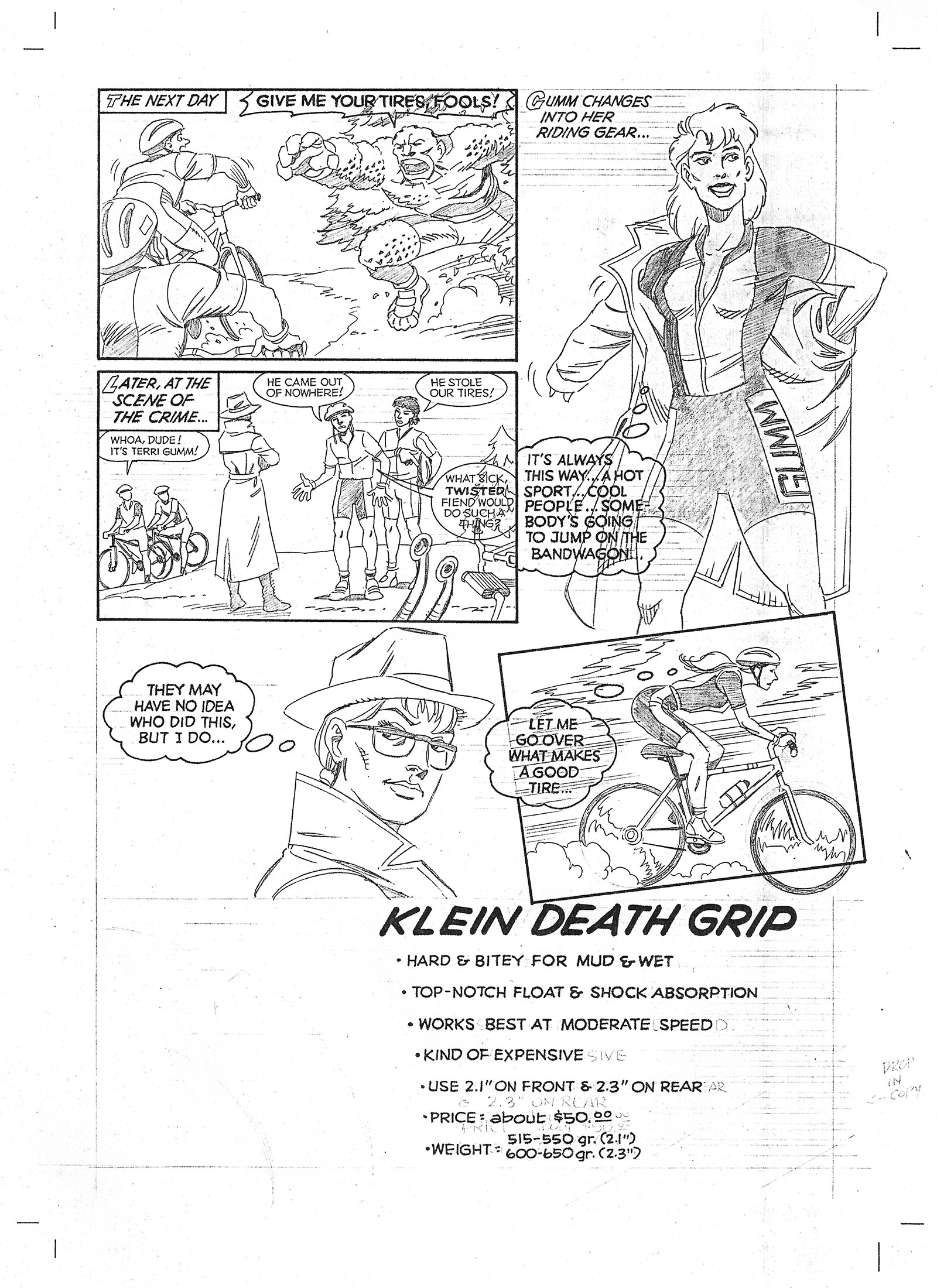 Version with Dave’s lettering. (Dave’s art additions yet to come.) 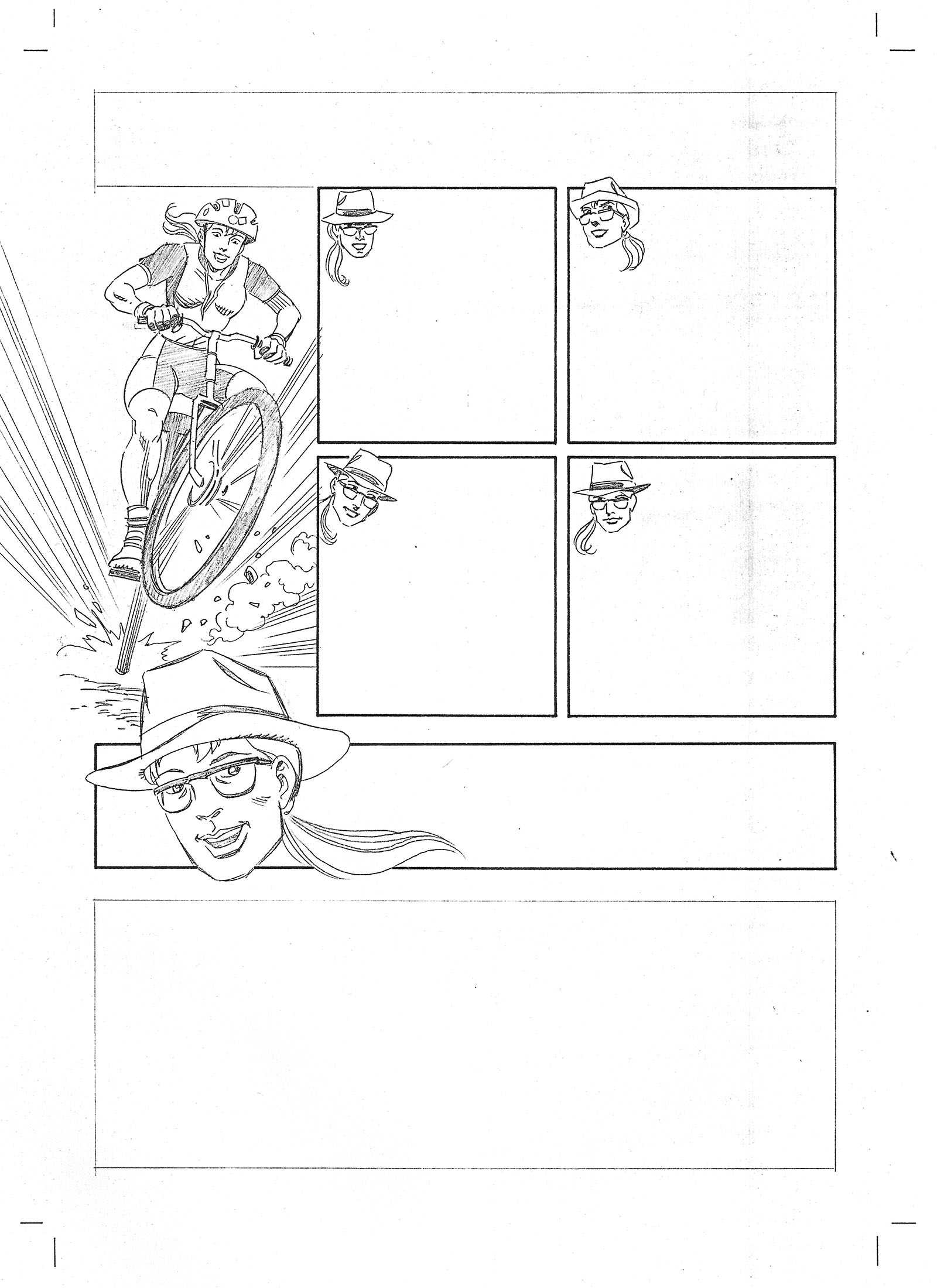 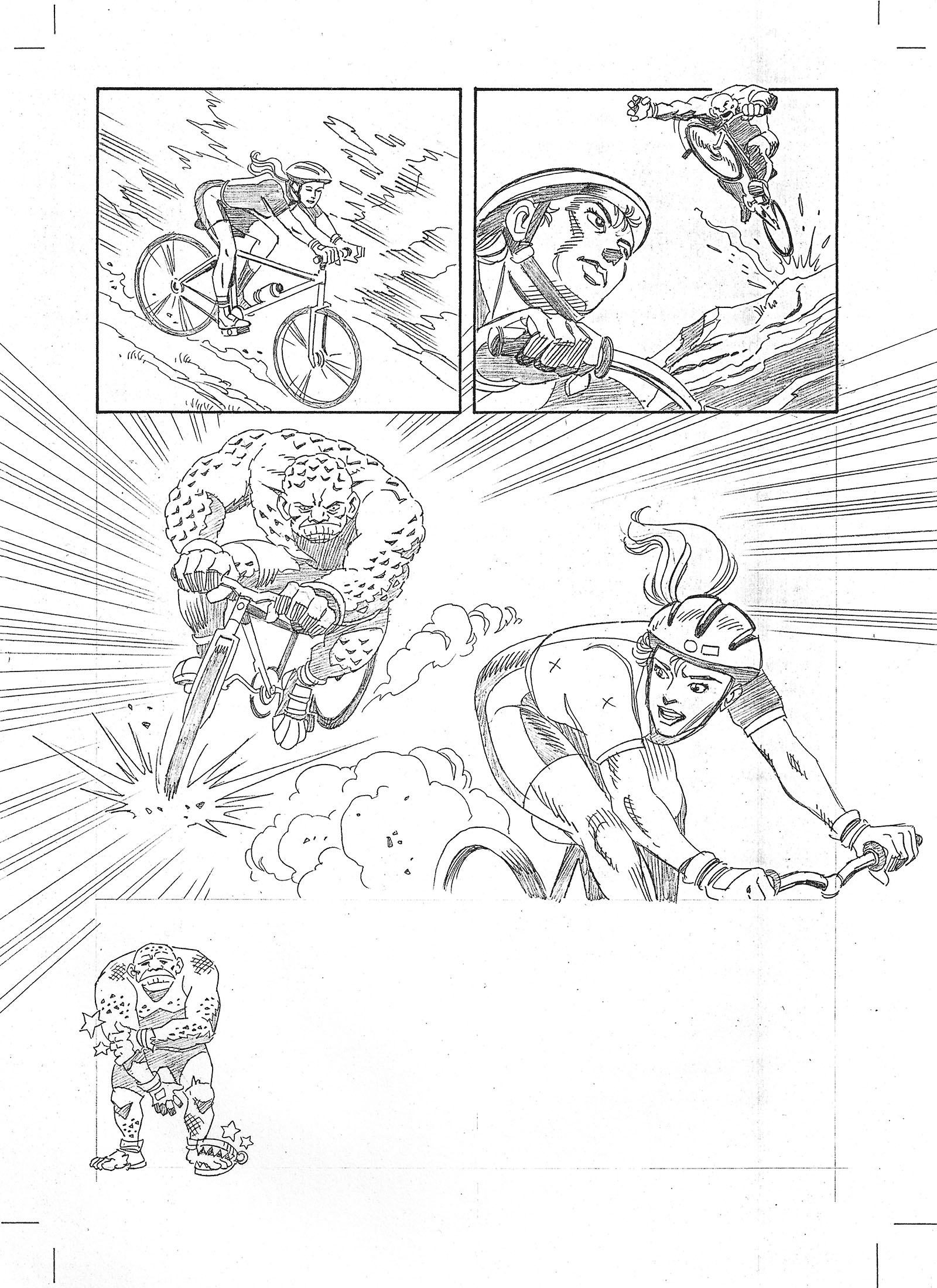 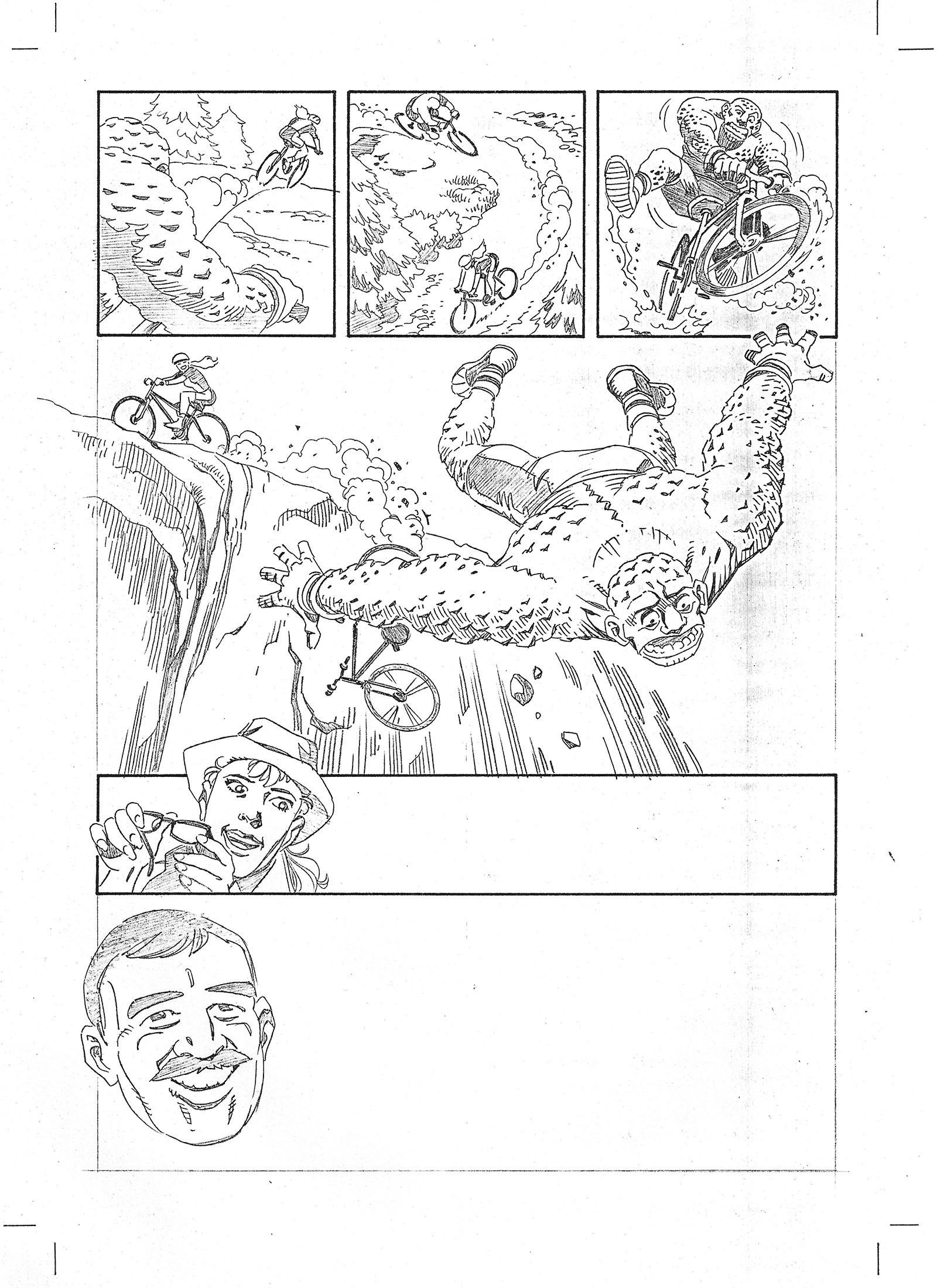 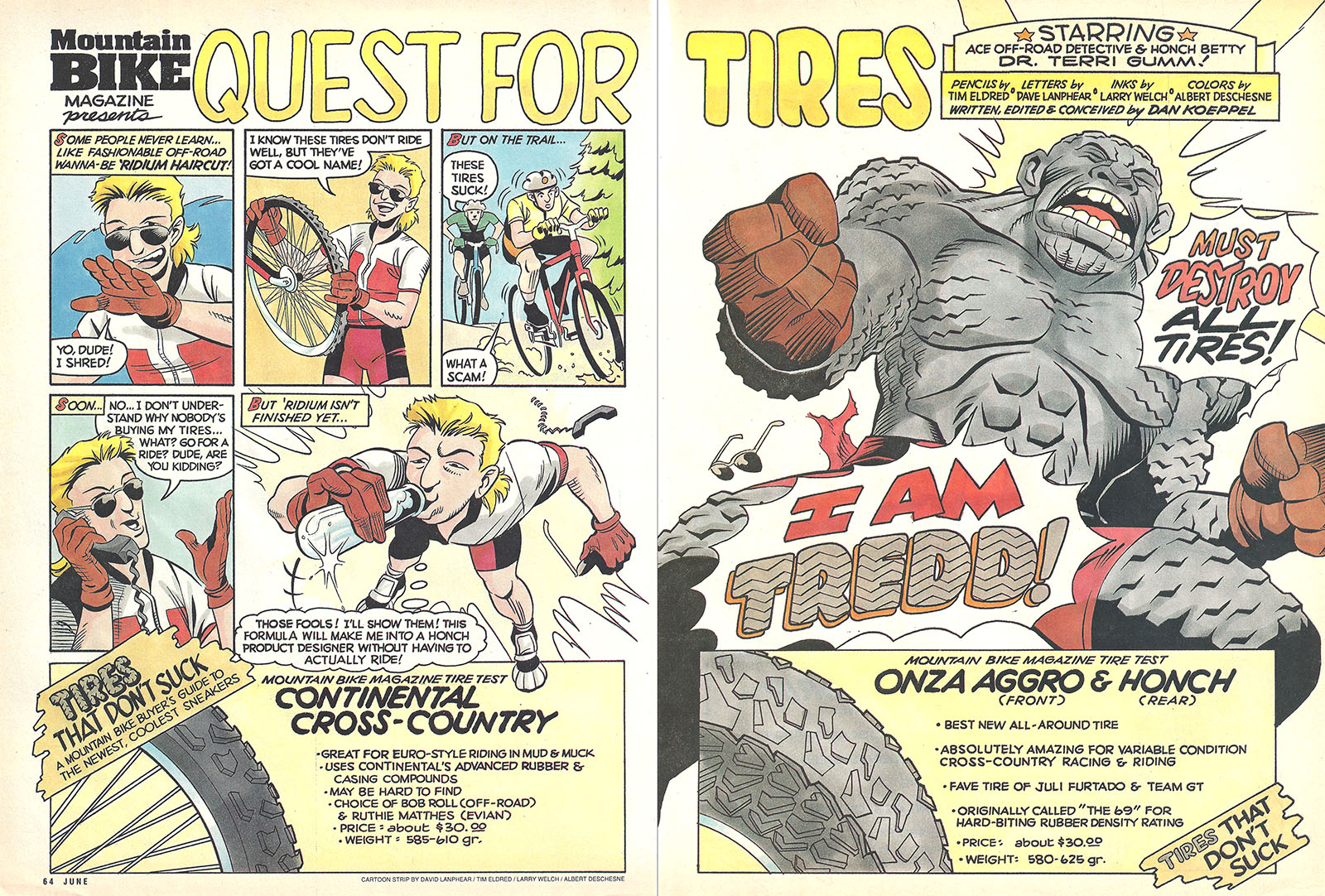 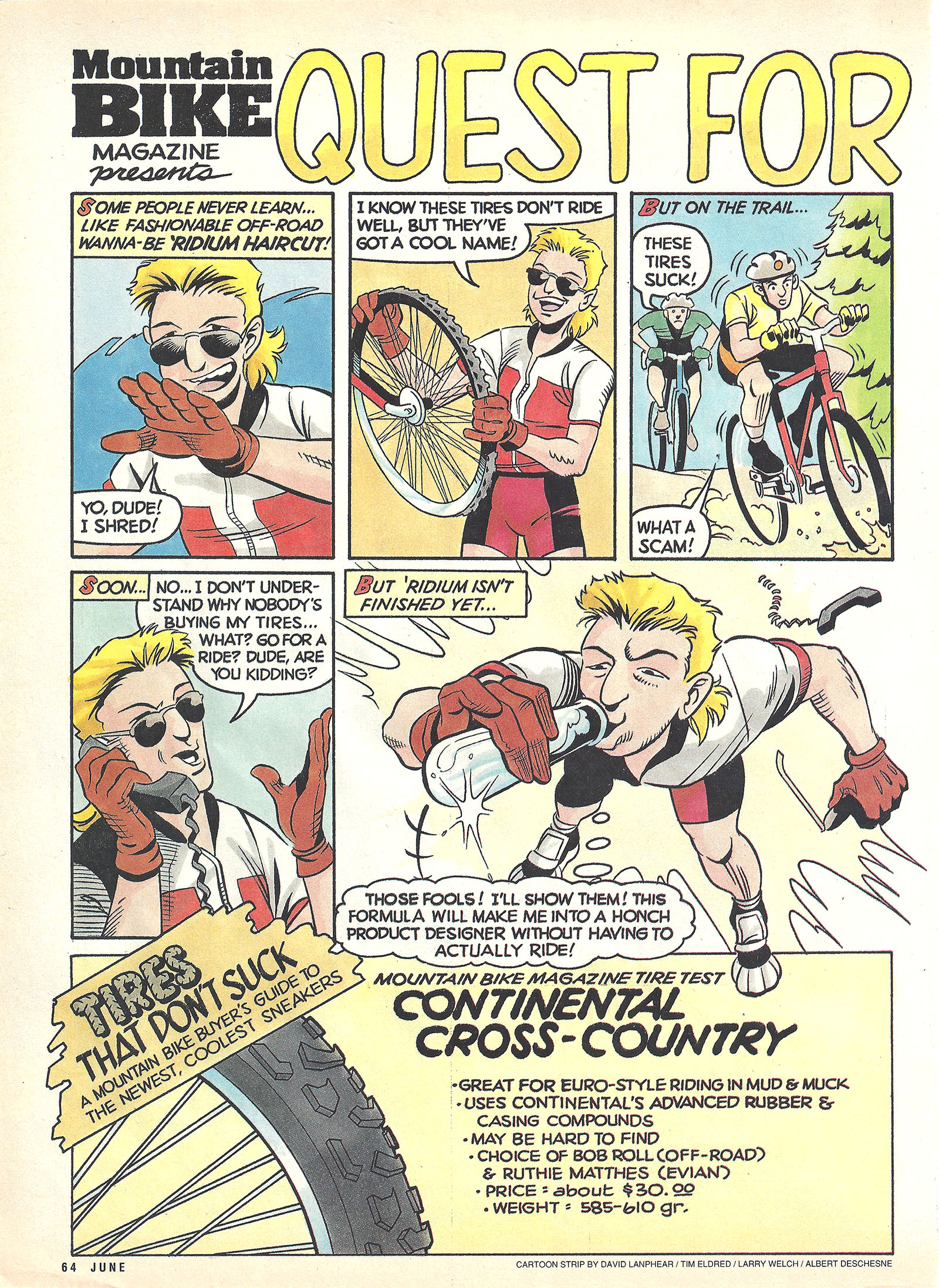 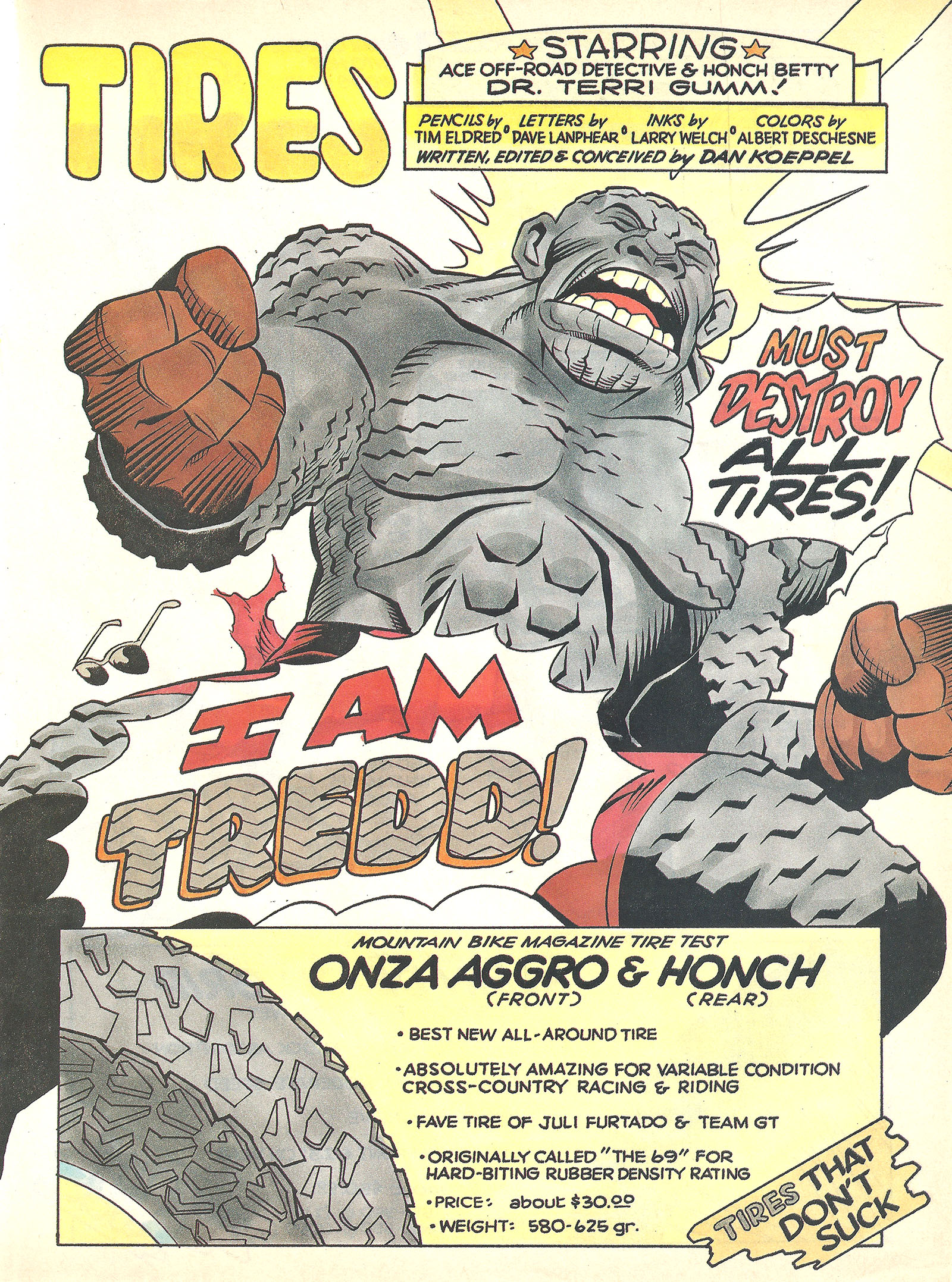 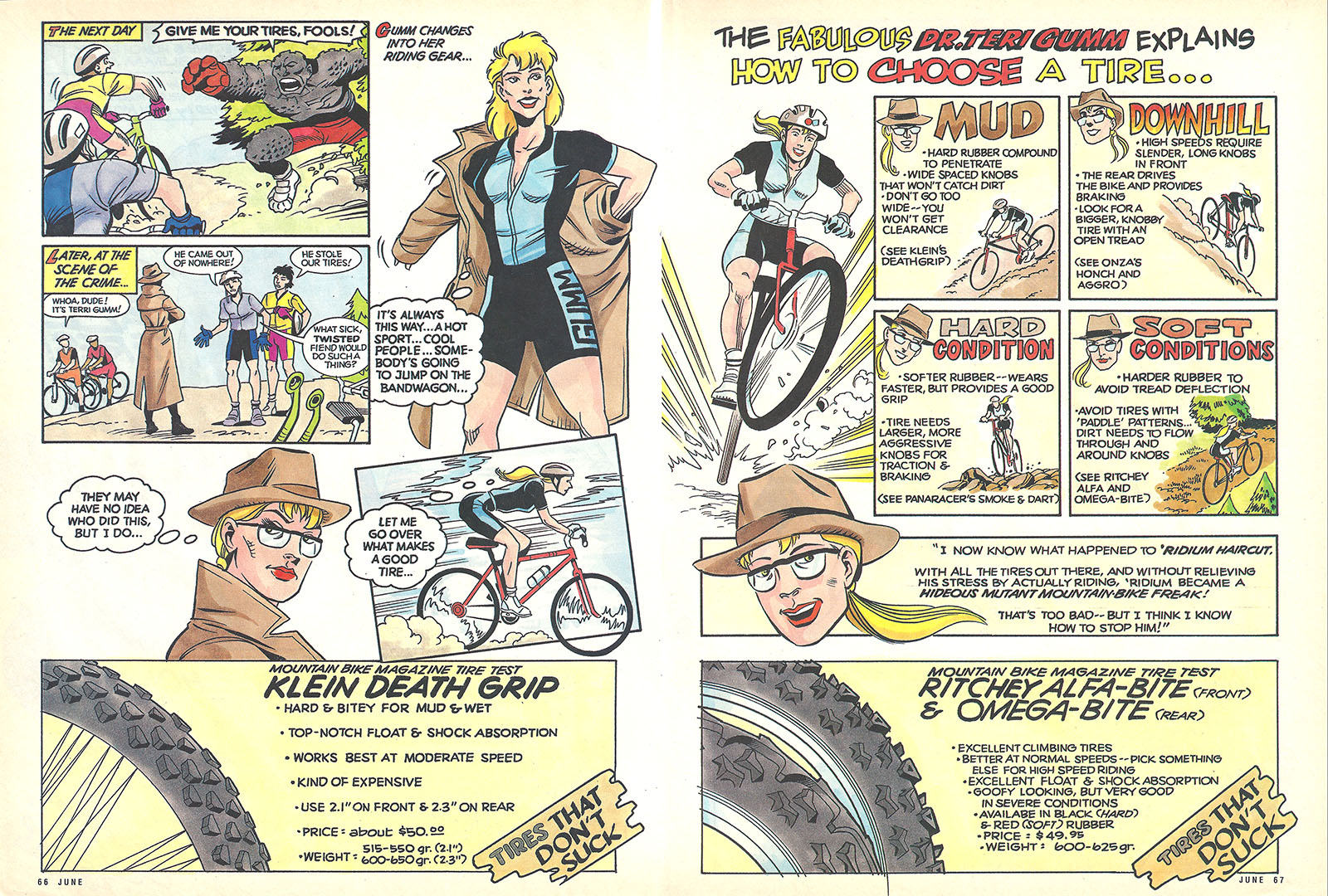 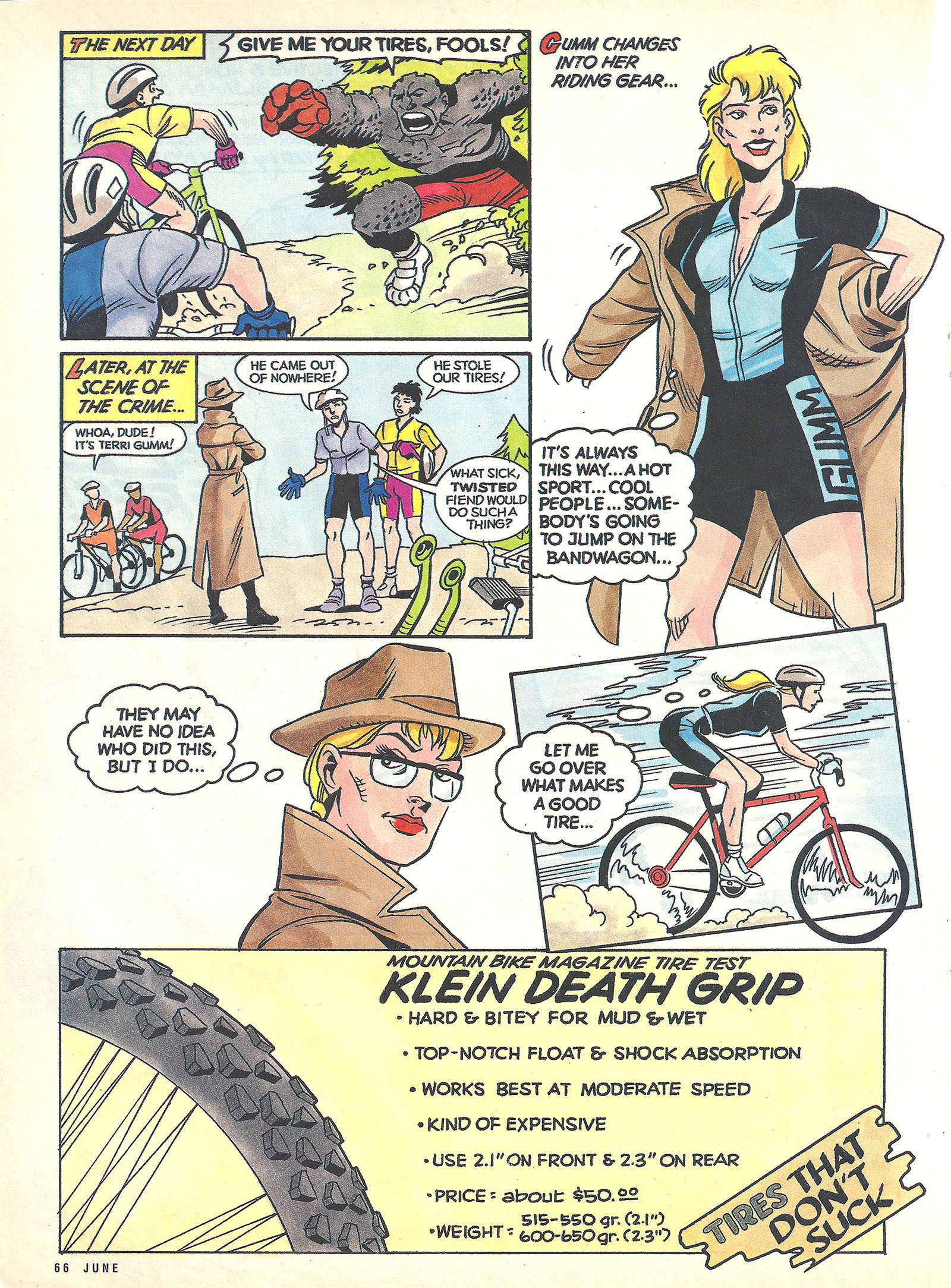 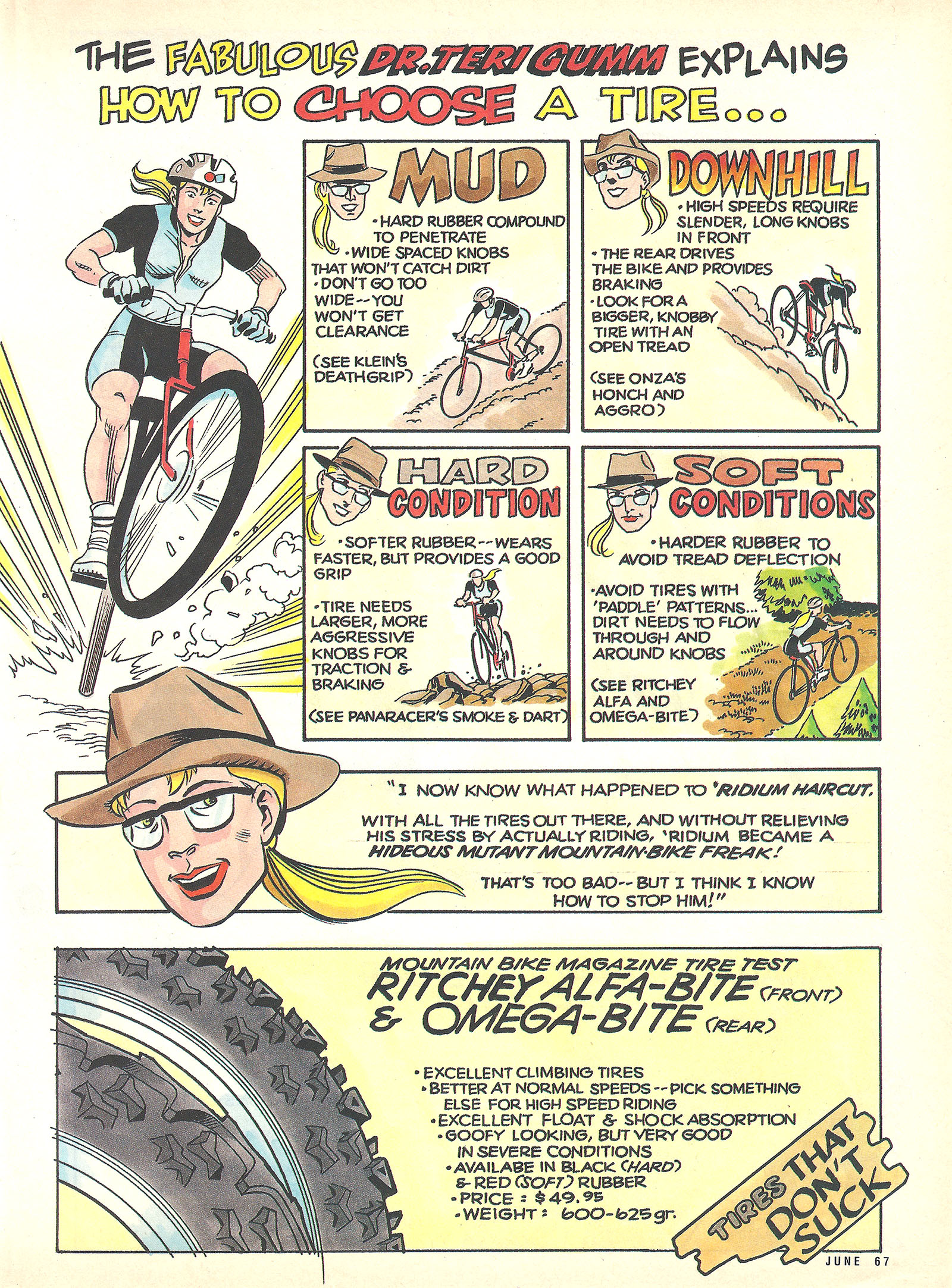 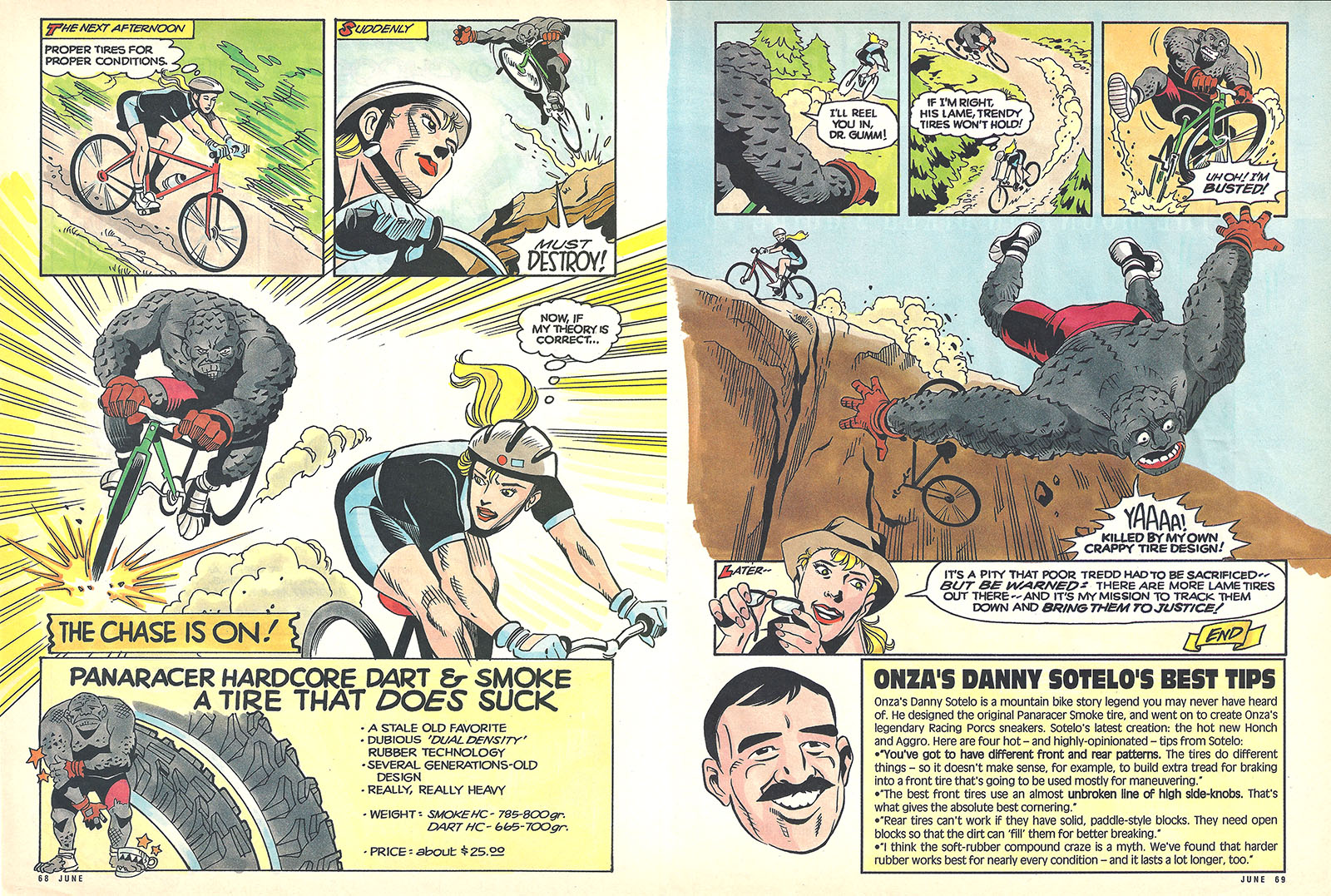 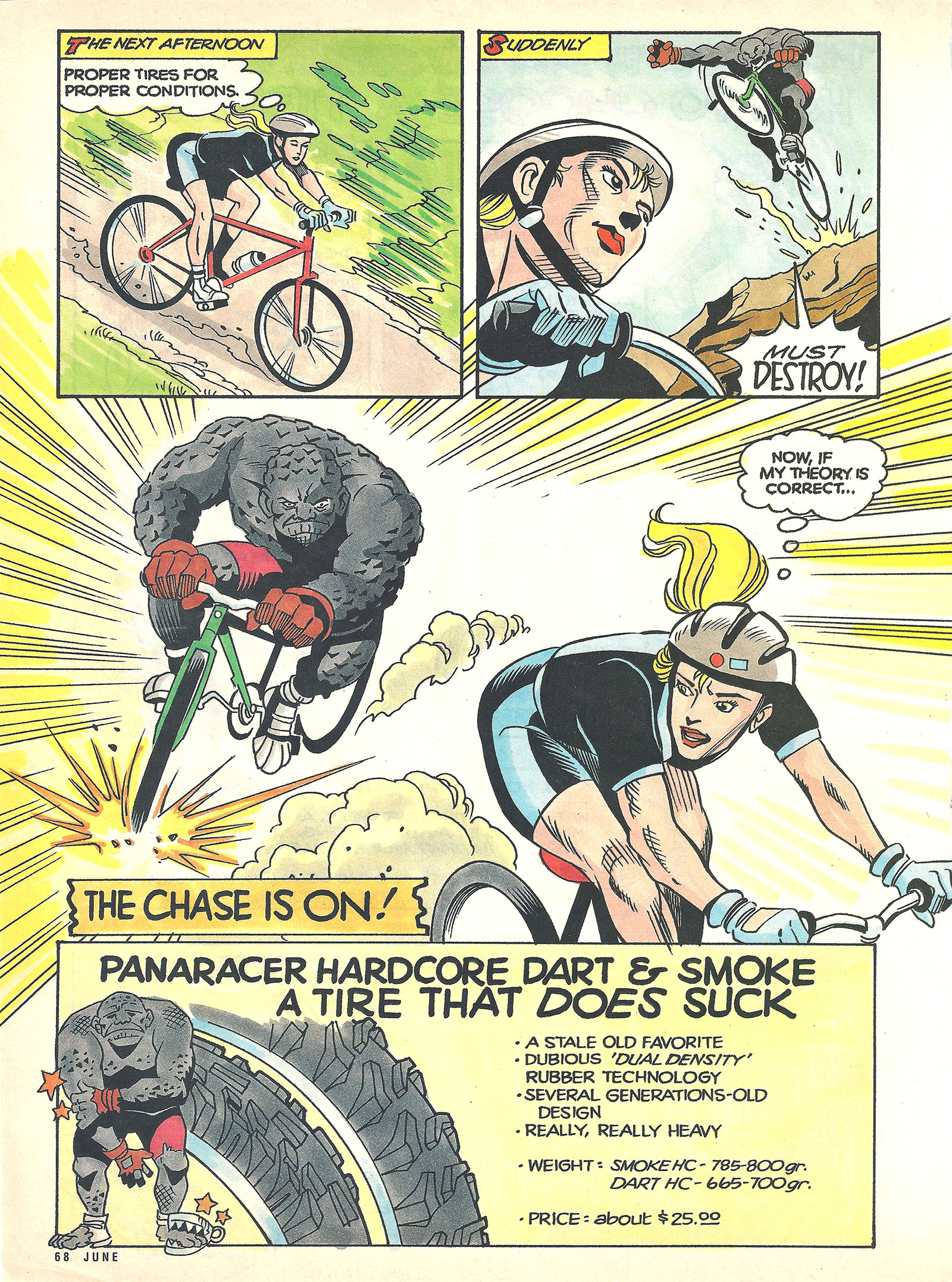 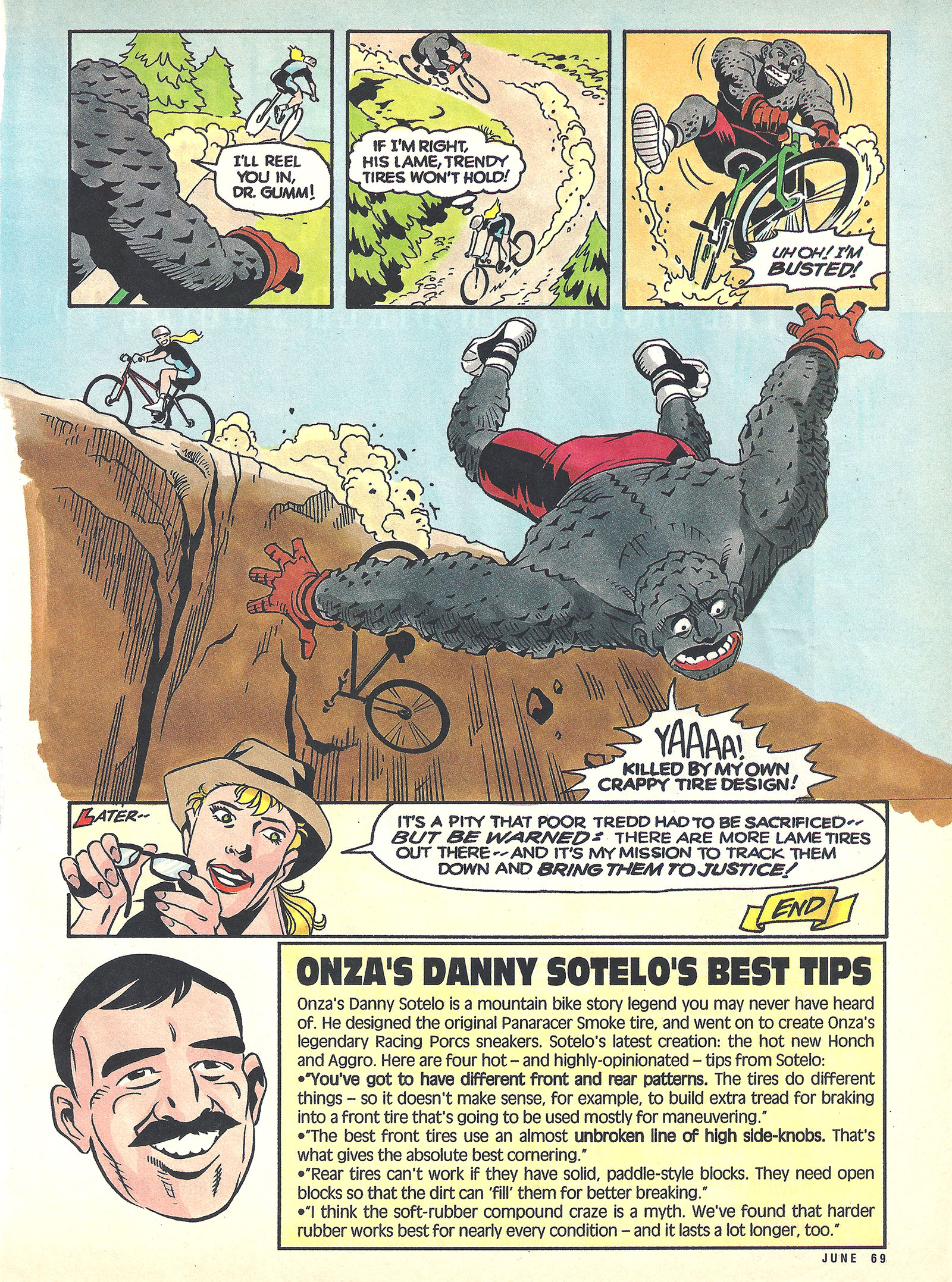 Postscript: one more mention of Malibu here…the editorial department was positioned over the art department, and as time went on, they became fully aware that we we disagreed with a lot of their decisions. This strained our overall relationship and led to distrust on both sides. The editor who was appointed as our direct supervisor somehow got wind that we had a side gig going on. He cooked up a theory in his suspicious little noggin that we were working for a rival company. When it finally got to be too much, he pulled Dave aside and fumed that if this was true we would all be fired. Dave explained, and when he got to the words “bike tires,” the temperature instantly dropped back to normal.

Dave Lanphear has his own gig now, A Larger World Studios, that specializes in lettering and comics production. Find their website here and their Twitter page here! 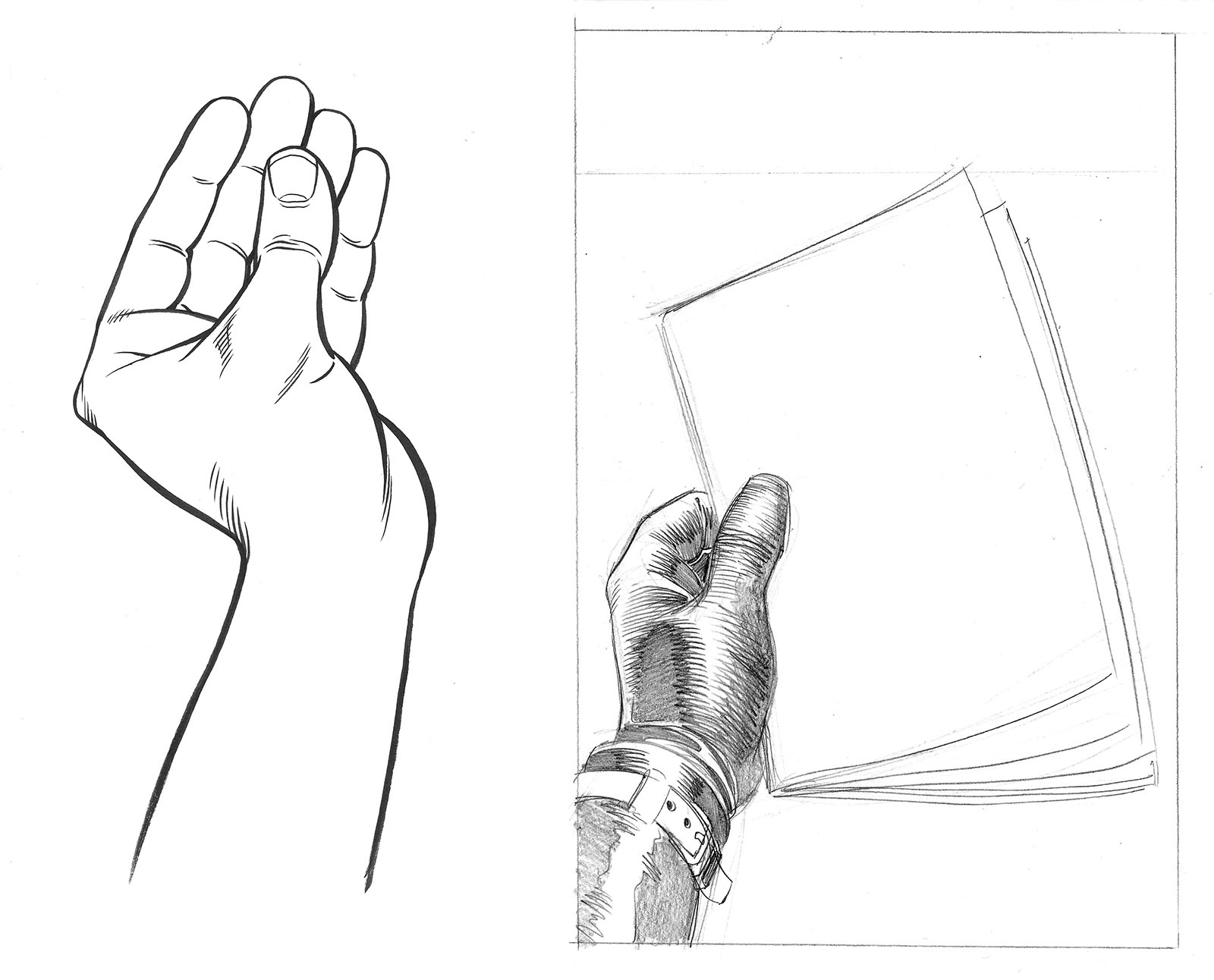 Occasionally we were asked to create “spot illustrations” for whatever need arose in a comic book or magazine. I don’t remember what these were needed for, but that’s my left hand…on the…left. 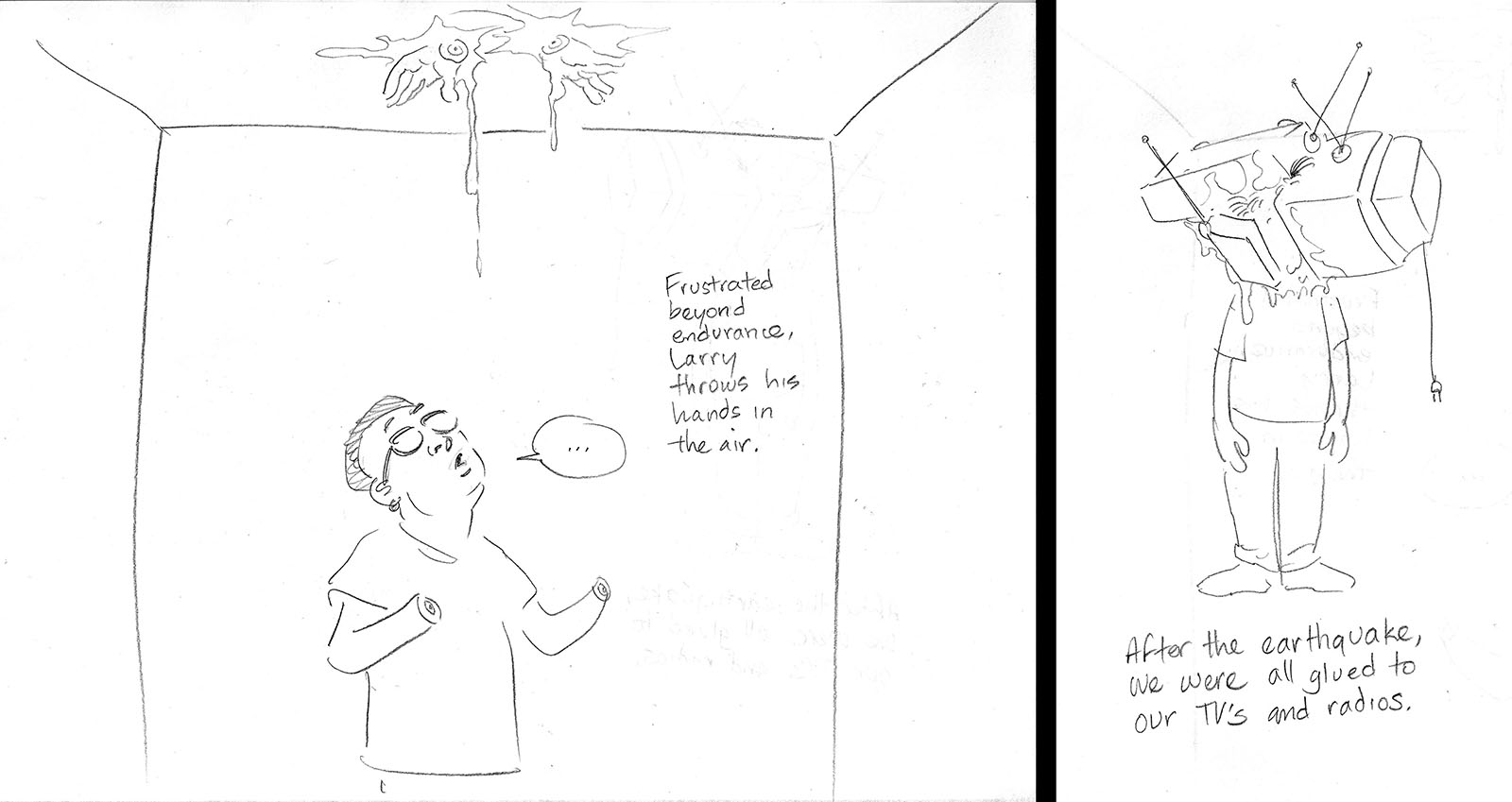 Silly cartoon hijinks by me