Obligatory disclaimer: I don’t own Star Wars. This is free fanfic. All laywers may stand down and return to their regular lawyering. 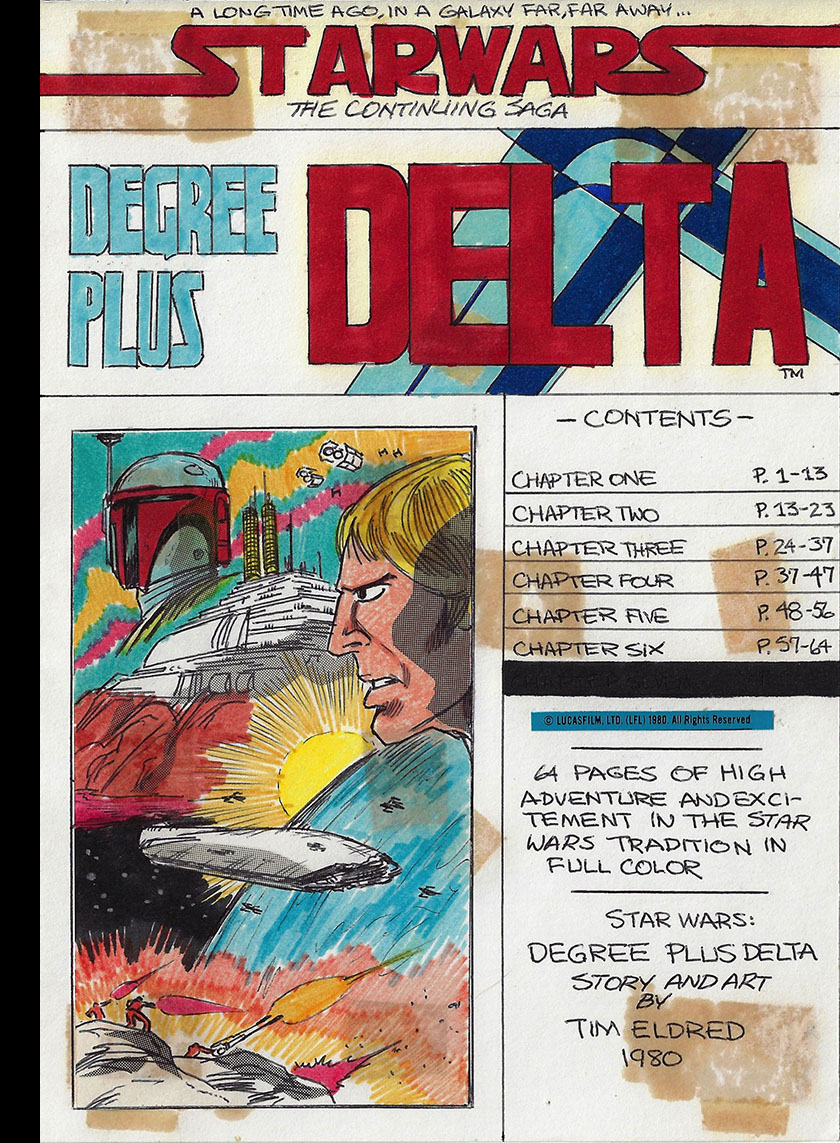 This was my second full-length Star Wars graphic novel, written and drawn in late 1980 when I was a tender 15 year old high school Sophomore. And it represented a pretty big turning point. Prior to this, as you may have seen in what I’ve published so far, my production techniques were quite raw. Little to no pre-planning, panels and lettering crammed together, zero pencilling. With this project, all that began to change.

It was due entirely to me getting some actual hands-on education. My family lived near Grand Rapids Michigan, in which resided an art college called the Kendall School of Design. My mom had schooled there, and she kept an eye on night classes that were open to the public. On one summer day in 1980, she brought me their fall brochure and pointed to a 3-word class title that reached out and gripped my eyeballs with Hulk strength: “Comic Book Production.”

She offered to sign me up and I agreed immediately. At least once a day after that I re-read the class description and tried to imagine what it would be like. It would last 6 or 8 weeks and promised a “class-created comic book” at the end. The teacher was a local pro named Mike Gustovich. I hadn’t heard of him yet (he moved in independent circles, a rare breed in those days), but when the first class began in September, he became an instant hero to me and all the other teenage boys in the room. An actual comic book pro. A guy who had been to the mountain and come back to tell us about it.

In reality, despite having published his own comics Cobalt Blue and Justice Machine under the company name Noble Comics (shown below), he was not well-known. His art was heavily inspired by Neal Adams and he never achieved household-name status. But all that mattered to us was the treasure trove of knowledge he poured over us in every class. Storytelling. Page layout. Panel composition. Pencilling. Lettering. Inking. Printing technology. These were things I had imagined from reading comics, but seeing a live demo was a whole different experience. The weeks flew by and I couldn’t wait to apply new knowledge to my craft at home. This graphic novel was the first result.

It was also the first Star Wars story I came up with in the wake of The Empire Strikes Back, which hit fandom like a 16-ton weight. Not only did we have an avalanche of new lore to process, we also had a cliffhanger to endure for three years until the next film. We had Marvel comics and a newspaper strip to help us through it, but that was never going to be enough for me. I had to get back onto that playing field ASAP, and Mike Gustovich had armed me with new gear to up my game. 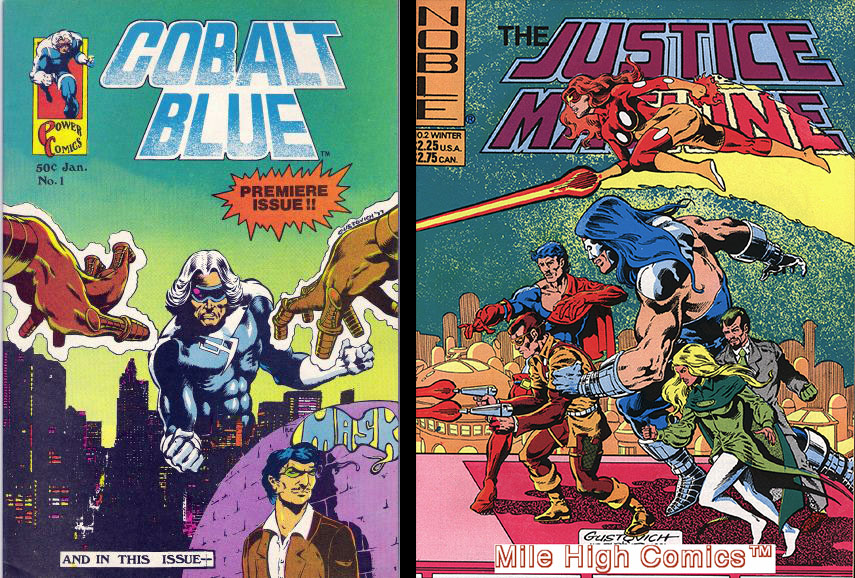 The first thing you’ll notice is that the pages are no longer overloaded. It used to be my practice to jam two or three pages of content onto one. Now I’d learned that three rows of panels was the standard, to be varied when the storytelling called for it. Those panels were separated by “gutters” and lettering was precisely ruled out to make it readable. I applied those rules to this project for the first time. It would take some experimenting to figure out the proportions that worked on an 8.5 x 11 page. Mike taught us that original comic art was drawn larger and then shrunk by 60% for printing. So the measurements had to be scaled down for the paper I used. My “gutters” ended up being too large this time, but there was no other way to learn than to try it and see the results. Either way, this one change allowed me to create a properly-paced story for the first time.

Then there was the revelation of Zip-a-tone. For years, I’d seen these mechanical dot patterns in comic books and had no clue how they were made. Mike demystified it for us: you could buy sheets of it (more generically called “screen tones”). They were basically a full-page transparent sticker. You’d cut out a piece of it with an Exacto-knife and stick it to your art. It would add this wonderful grey tone that instantly made your work look more professional. If you put one layer over another, you’d get a double pattern that looked totally psychedelic. This was a genuine magic trick, and I couldn’t wait to put it to work.

That said, as you go through this you’ll see scraps of “Zip” that look all random and explodey. That’s because this stuff was pretty expensive for a teenager. When I started drawing Star Wars comics for fanzines, I came back to this one and peeled off whatever I could reuse. It made the later comics look way better than this one (which I didn’t expect to ever share with anybody), so no regrets. Now it’s kind of a charming reminder of what it was like to do all this on a shoestring budget.

On the other hand, I was still NOT penciling before inking (something that definitely needed to change) and I didn’t have a single source of blank paper, so you’ll see different grades from page to page. Story-wise, it’s another case of make-it-up-as-you-go. Luke Skywalker, Wedge Antilles, and Boba Fett were the only “name” characters I used. Everyone else was original. I also included TIE Bombers, because they fascinated me. The writing was still juvenile, but a step up from earlier efforts. Rereading it now, I can definitely tell that I had internalized Star Blazers (the anime that made me want to make cartoons) and it was finding its way back out.

Lastly, it was the third (and last) full-color Star Wars story I attempted. Color was always a crap shoot, since markers would constantly dry out and crayons were just too inconsistent. I was forced to conclude that color was a dead end, since I had no means of printing it. From here on, I would stick with black and white until I entered the digital world about fifteen years later.

Production for Degree Plus Delta took about two months, from October 19 to December 13 1980. The title came from a random assortment of words that applied to only one moment in the story. They sounded cool to me at 15, so I went with it. Wouldn’t be the last time. 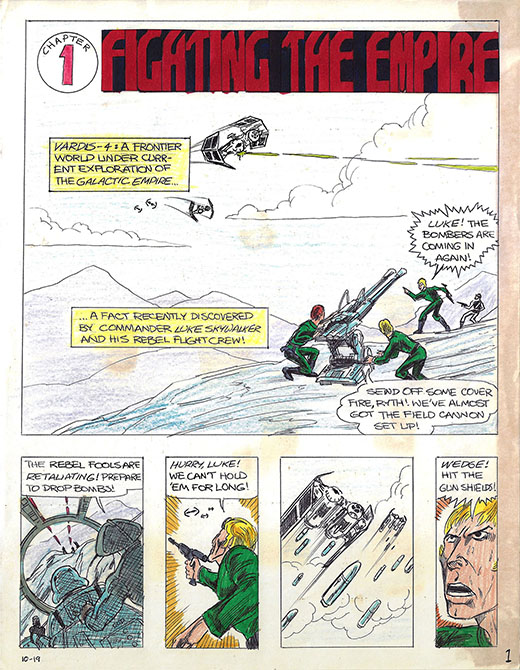 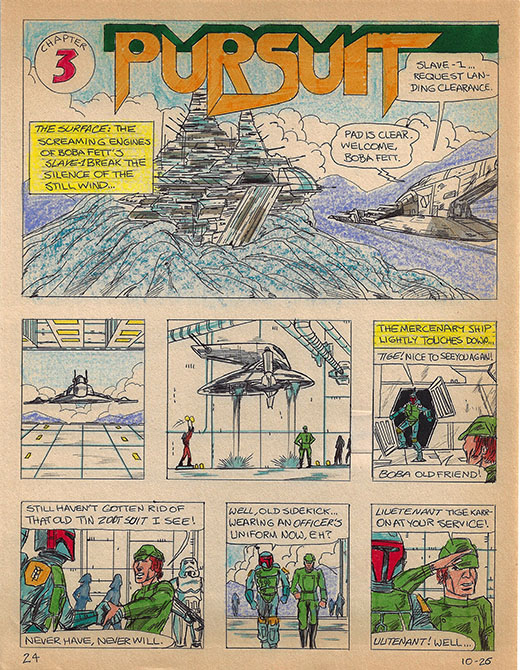 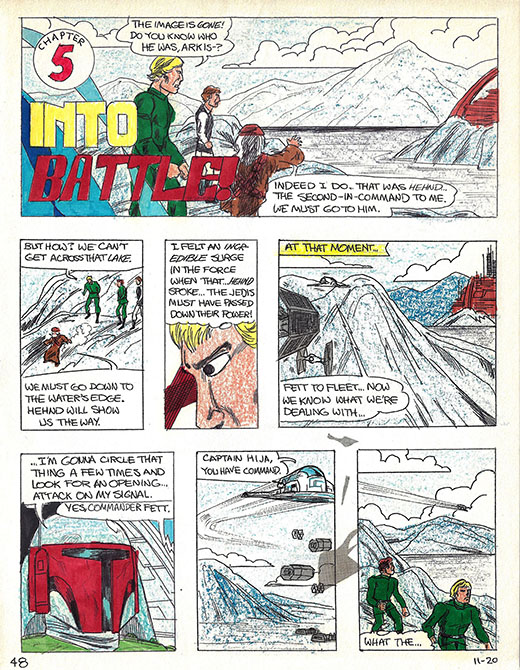 Postscript: as recounted elsewhere, I became a full-time comic book artist in the summer of 1989. By 1992, I’d reached a point where I could teach the craft to others and I was living in Grand Rapids again, so I contacted Kendall School of Design to offer my services. They took me up on it, and the Comic Book Production class was revived. It was quite a moment to step into that first session and see all those teenage faces light up.