It’s volume 4 for two reasons. First, if you dig deeper into the “mystery grab bag” section of ArtValt, you’ll find three previous volumes. Second, there’s ALWAYS more stuff in the archives that was created with hope and optimism but led to zero results. Except it now gives me stories to tell. 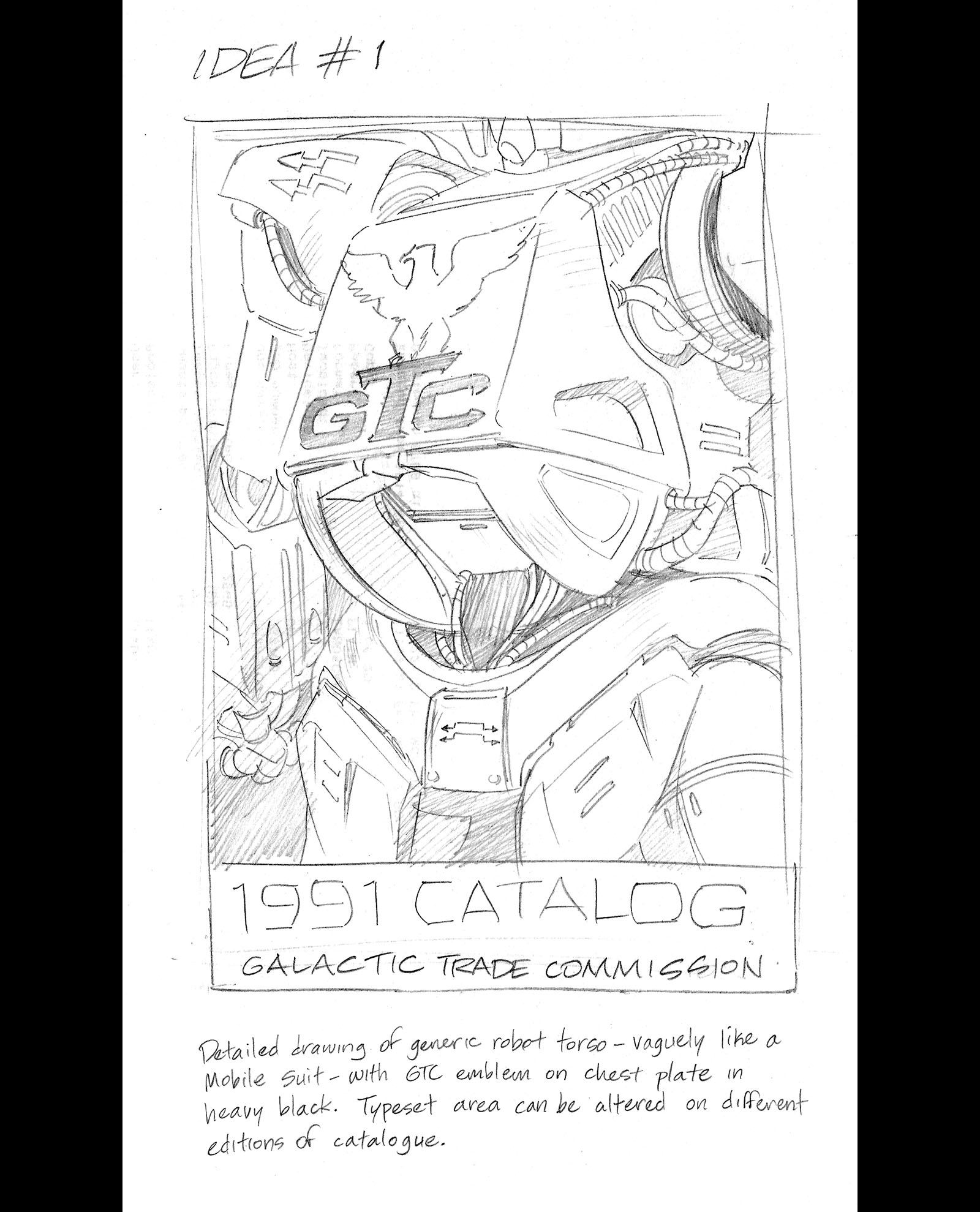 Before the name was taken over by Star Wars lore, it belonged to a tiny company that used to import model kits from Japan for sale at SF conventions and by mail. Back in ’91 when I was a crazy anime model kit collector (now I’m a sane one) I didn’t have a lot of disposable income, so I thought maybe I could barter instead. GTC didn’t have a very attractive catalog at the time, so I created three cover ideas and faxed them in (unsolicited), asking if they’d trade art for product.

My offer resulted in a friendly phone call from the owner thanking me for the effort, but he couldn’t take me up on it. Oh, well. Eventually I got all the models I was after. Most of them are still unbuilt. 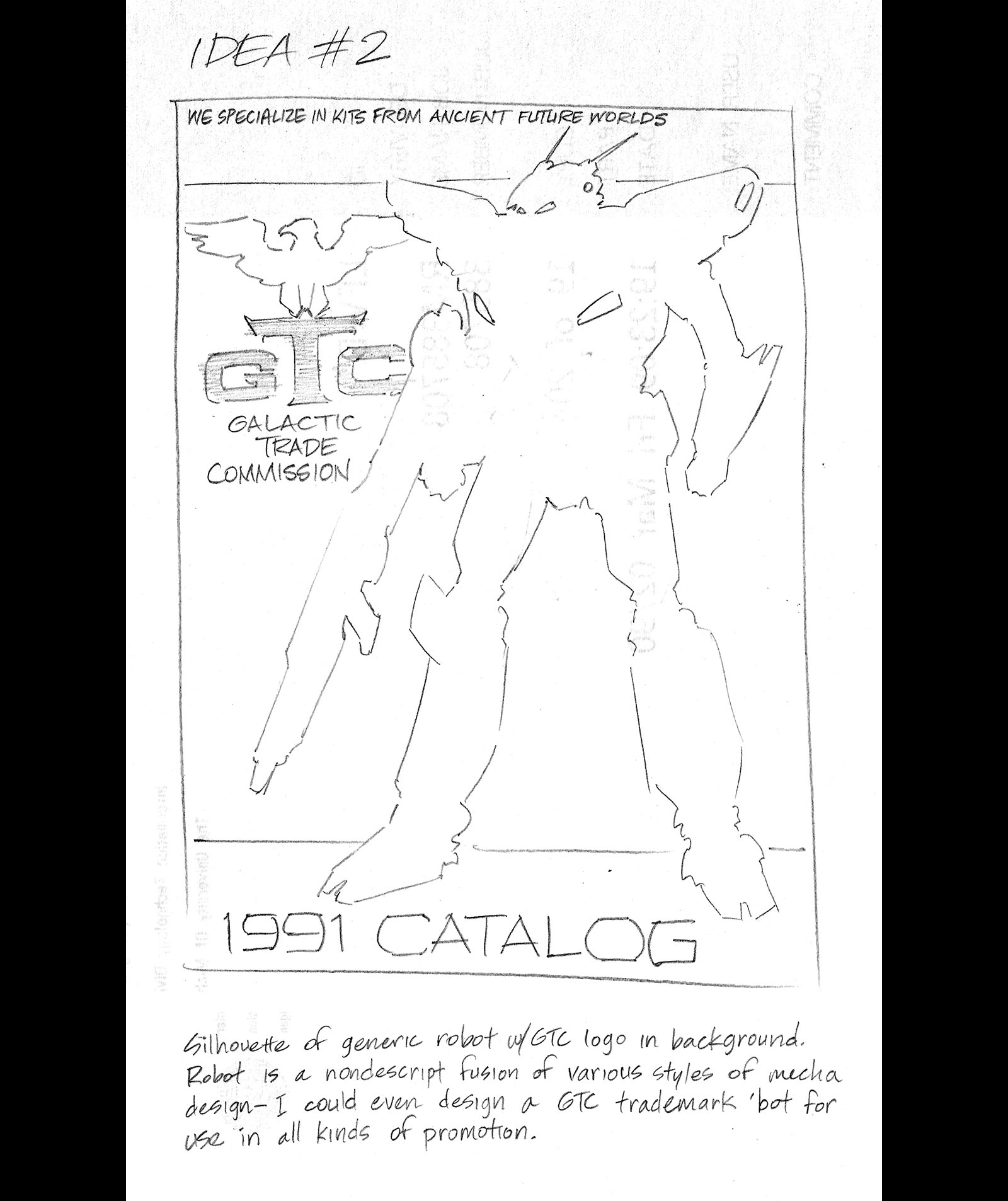 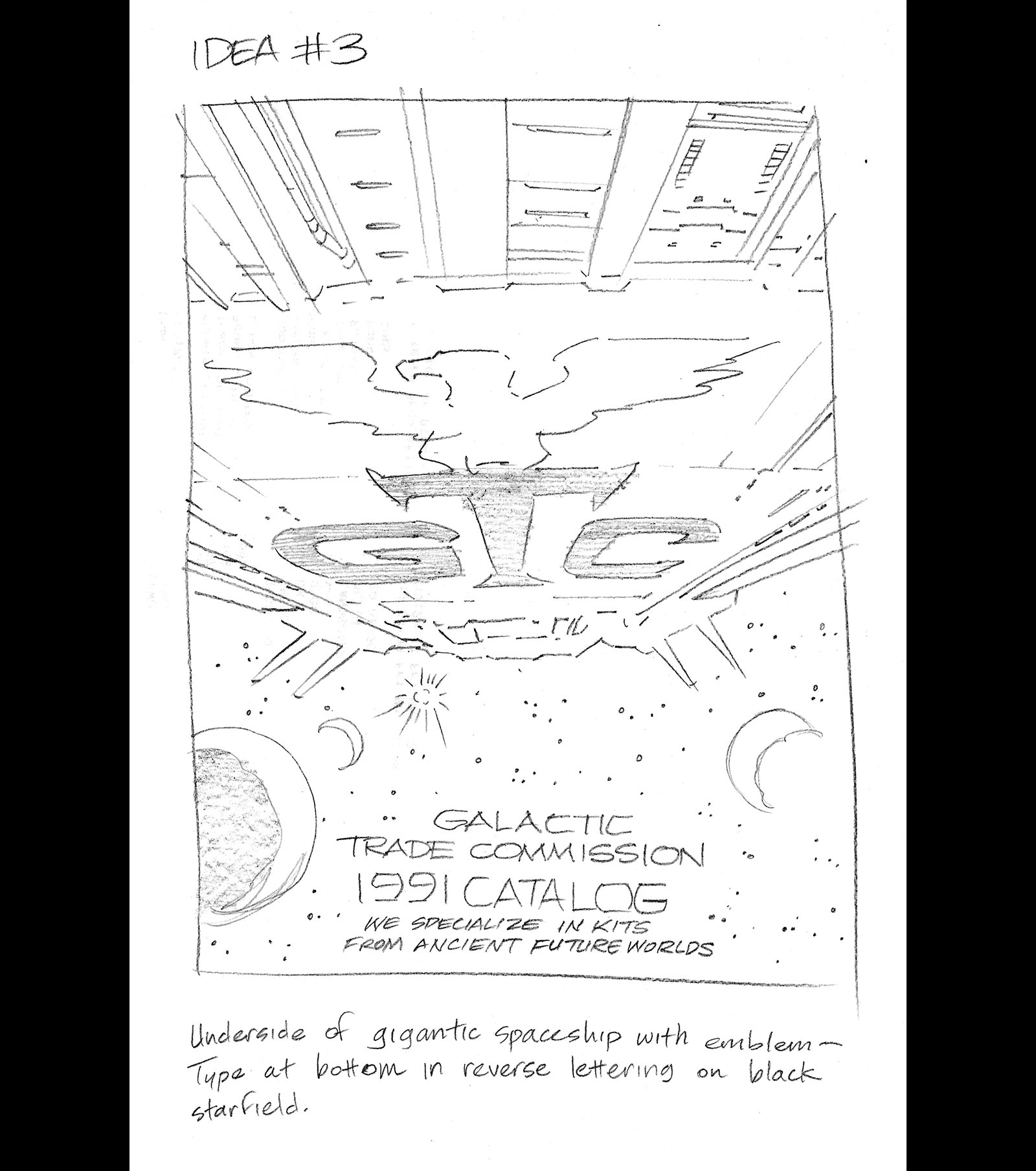 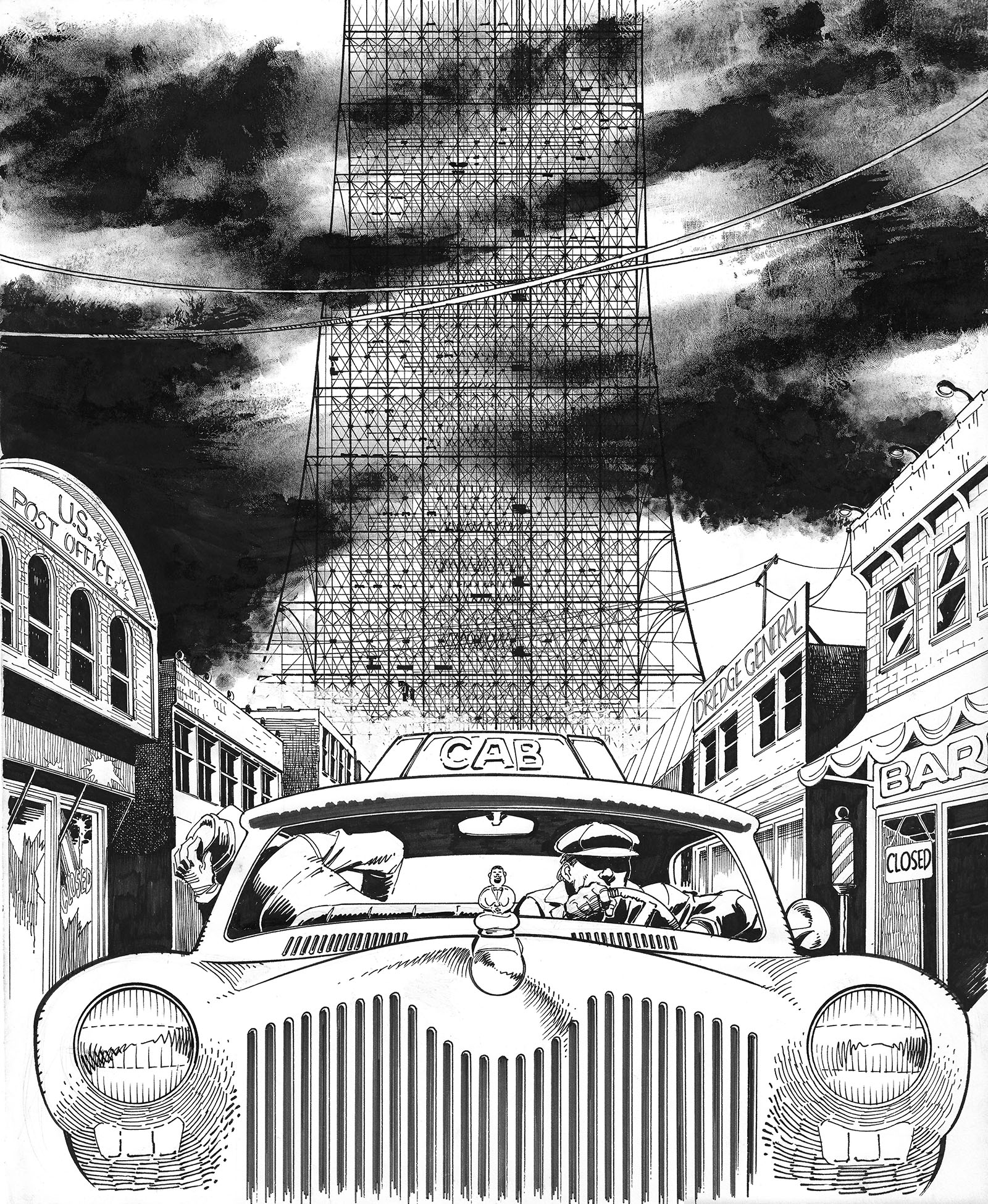 In ’92, comic book ideas were pouring out of me. I would typically write up a 3-4 page proposal for an idea and create pitch art for the cover page. This art was for a story titled Small Town Blues, inspired at the time by Twin Peaks. It was set in Drudge City, a town in the midwest rust belt full of all sorts of colorful characters. I pitched it to the publishers I was in contact with at the time, but nobody bit. I still like it. Maybe I’ll do it on my own someday. 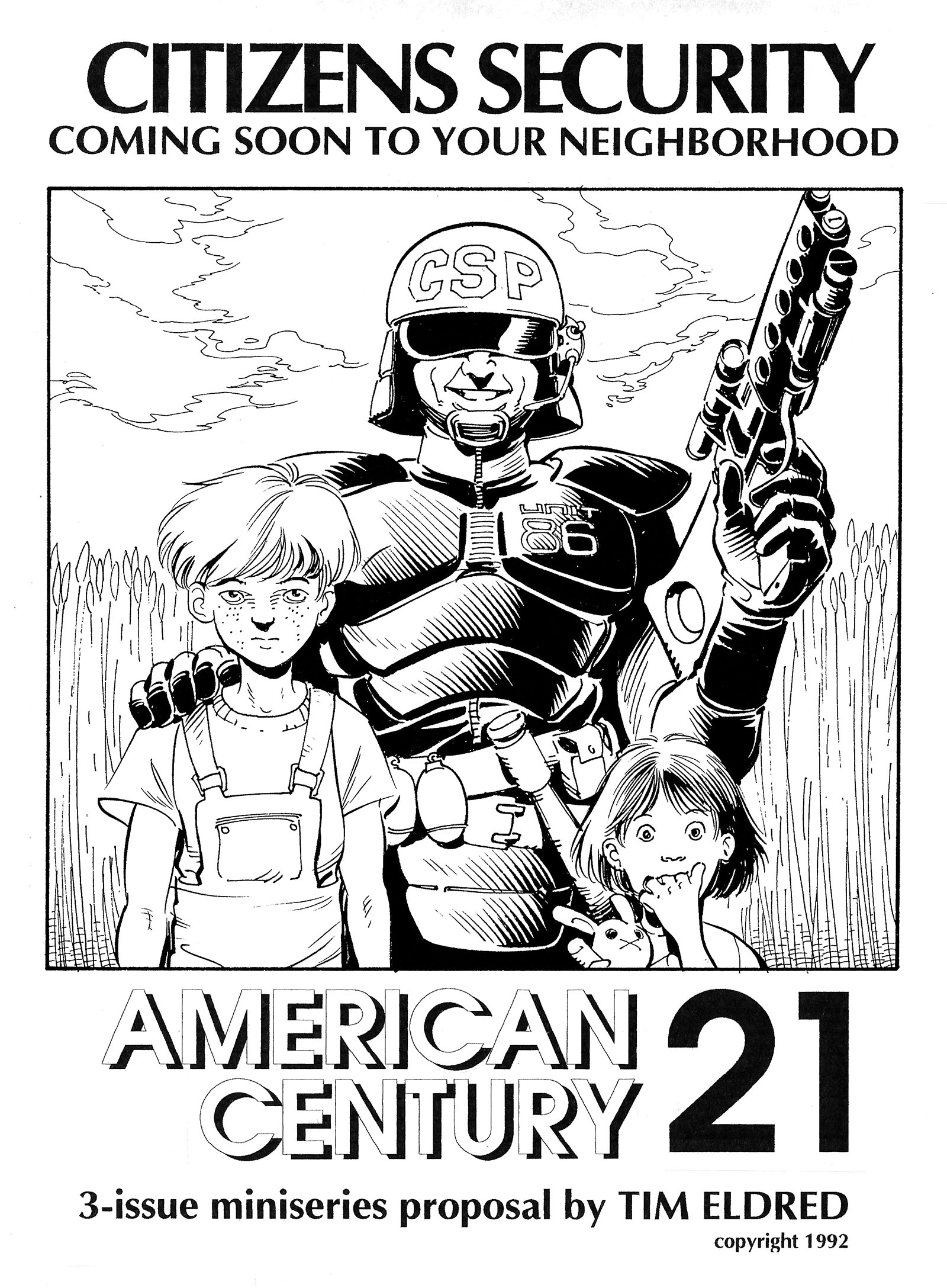 Here’s another one from the same year. It was all about – get this – the rise of fascism in America. Who could ever imagine THAT coming, huh?

The target for this one was Japanese publisher Kodansha, which had launched a program they called “Dyna-search” to find American artists to create comics for Japan. This sounded like a perfect opportunity, so I reached out to them with various things I was working on. It took several conversations before they finally stated that they weren’t taking science-fiction or fantasy concepts. (Gee, ya think you could have told me that up front?) So I came up with something more down to Earth and rooted in American life. This was it.

Trivia note: the little girl on the right was modeled on my daughter, who was 3 at the time and stuck her fingers in her mouth exactly like that. And she carried a stuffed bunny everywhere. 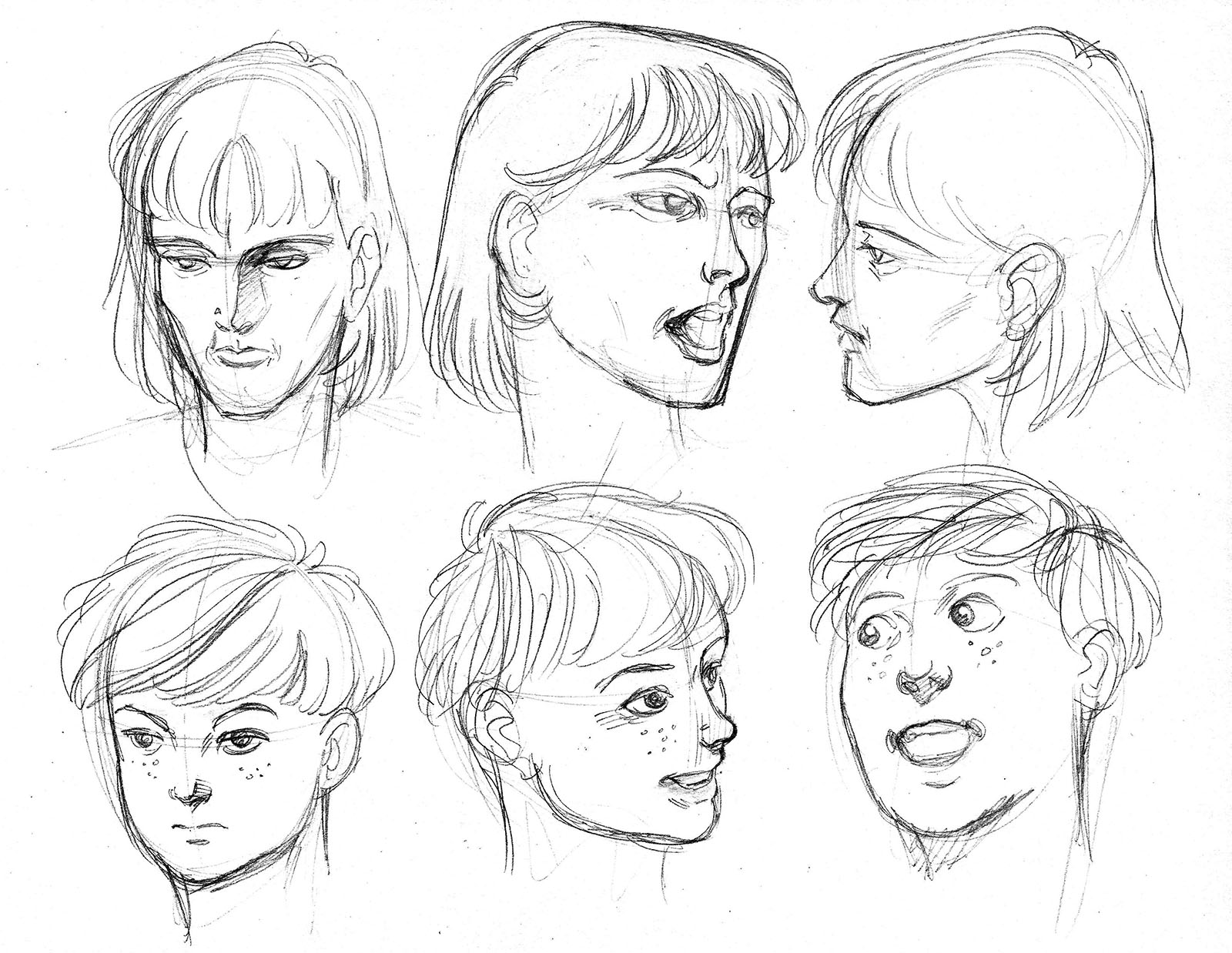 The working title was American Boy, and the main character would be a Wyoming farm kid in the distant future year 2005. By this time, America’s wealth gap had widened to the point of economic collapse, and the government was besieged by protesters, would-be militias, and insurrectionists. Again, what a wild imagination, right? 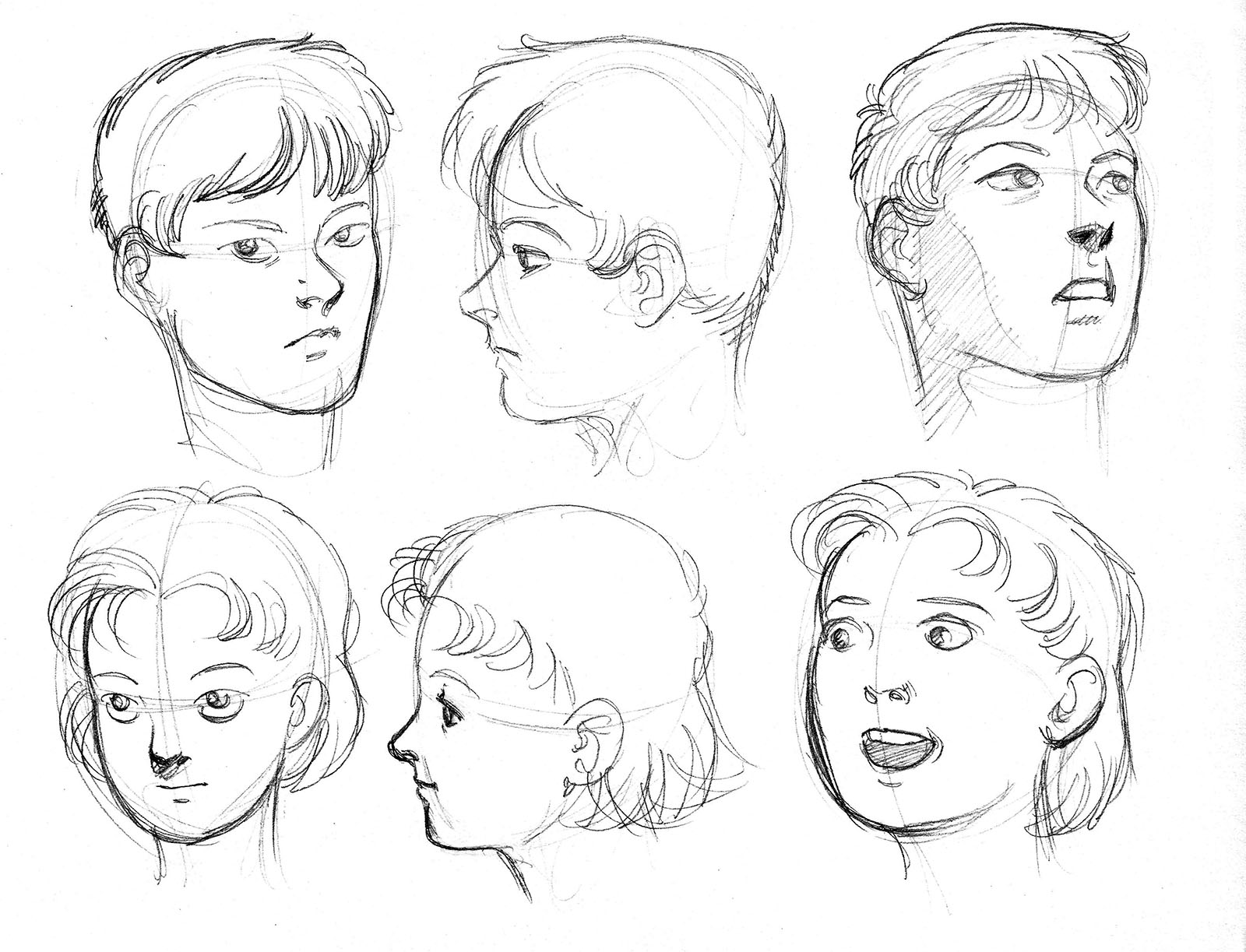 The farm kid lives with his mom and three siblings (designs above) in a small town. Their father is part of an underground rebel group, hunted by the newly-formed Citizens Security Patrol. Basically, anyone looking for a job could become part of the new police state to hunt down radicals. 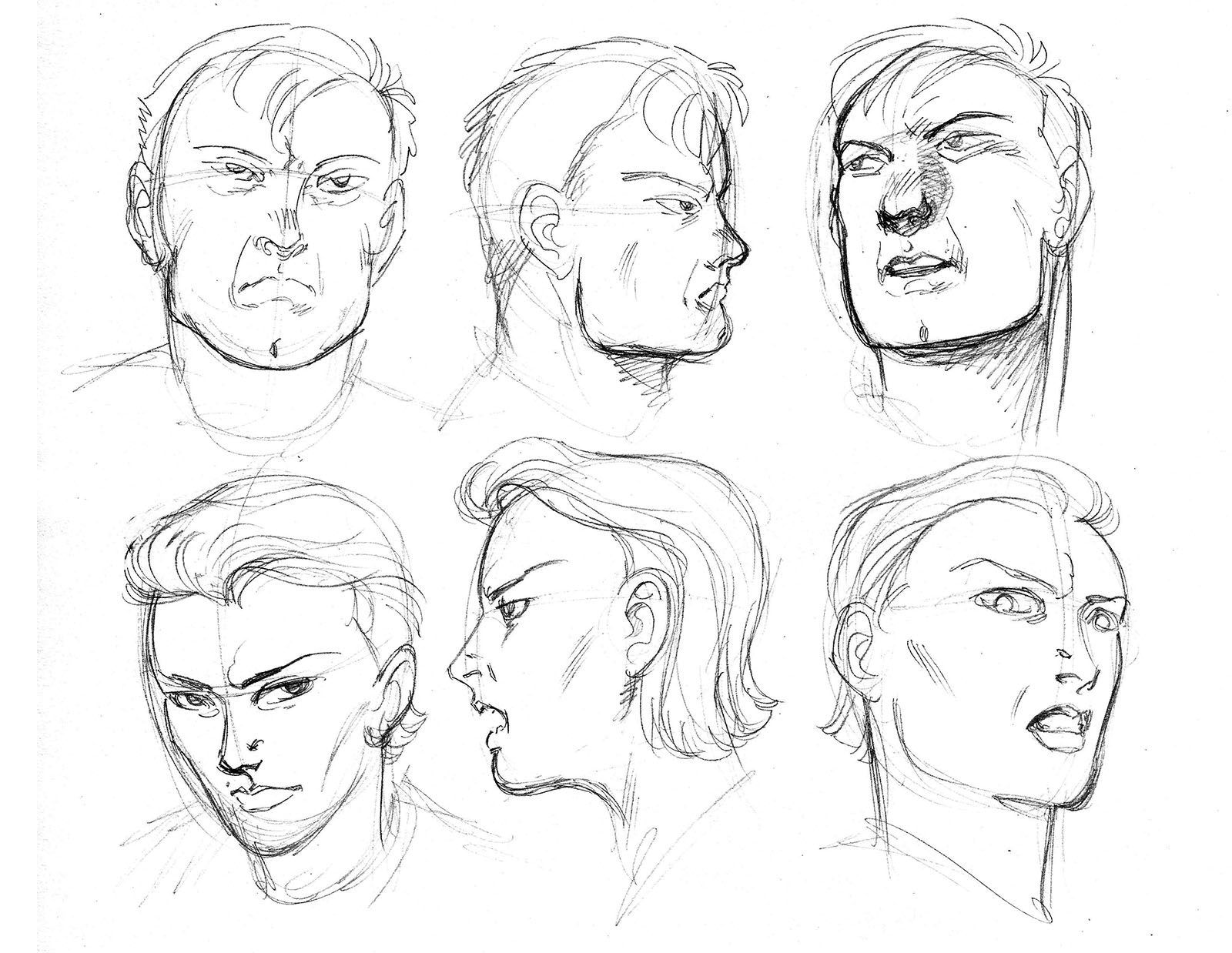 Four members of the CSP (designs above and below) show up one day when they learn the father may be coming home. They forcibly occupy the farmhouse in a stakeout, setting up an extended emotional clash with the family; a tense, boiling microcosm of larger forces in the background.

I got as far as scripting and thumbnailing the first ten pages as a sample for Kodansha, but by that time they’d stopped communicating. I think I heard later that they shut down “Dyna-search” because they weren’t finding anything they wanted. So I put it aside and went on to other things.

Ten years later, DC’s Vertigo imprint published a comic by Howard Chaykin called American Century, so if I ever bring this idea back to life I’ll probably return to American Boy for a title. Let’s see how real life goes over the next few years… 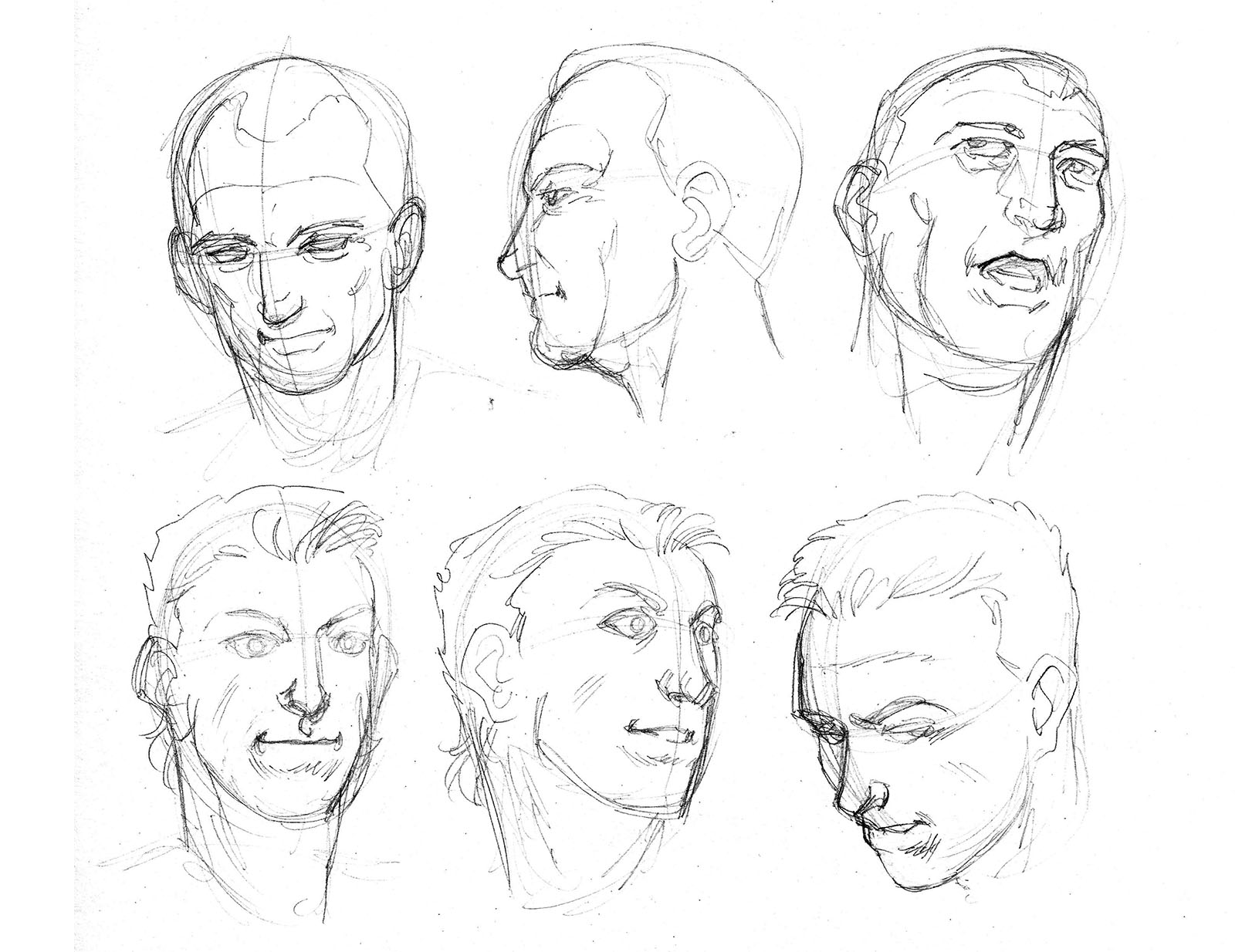 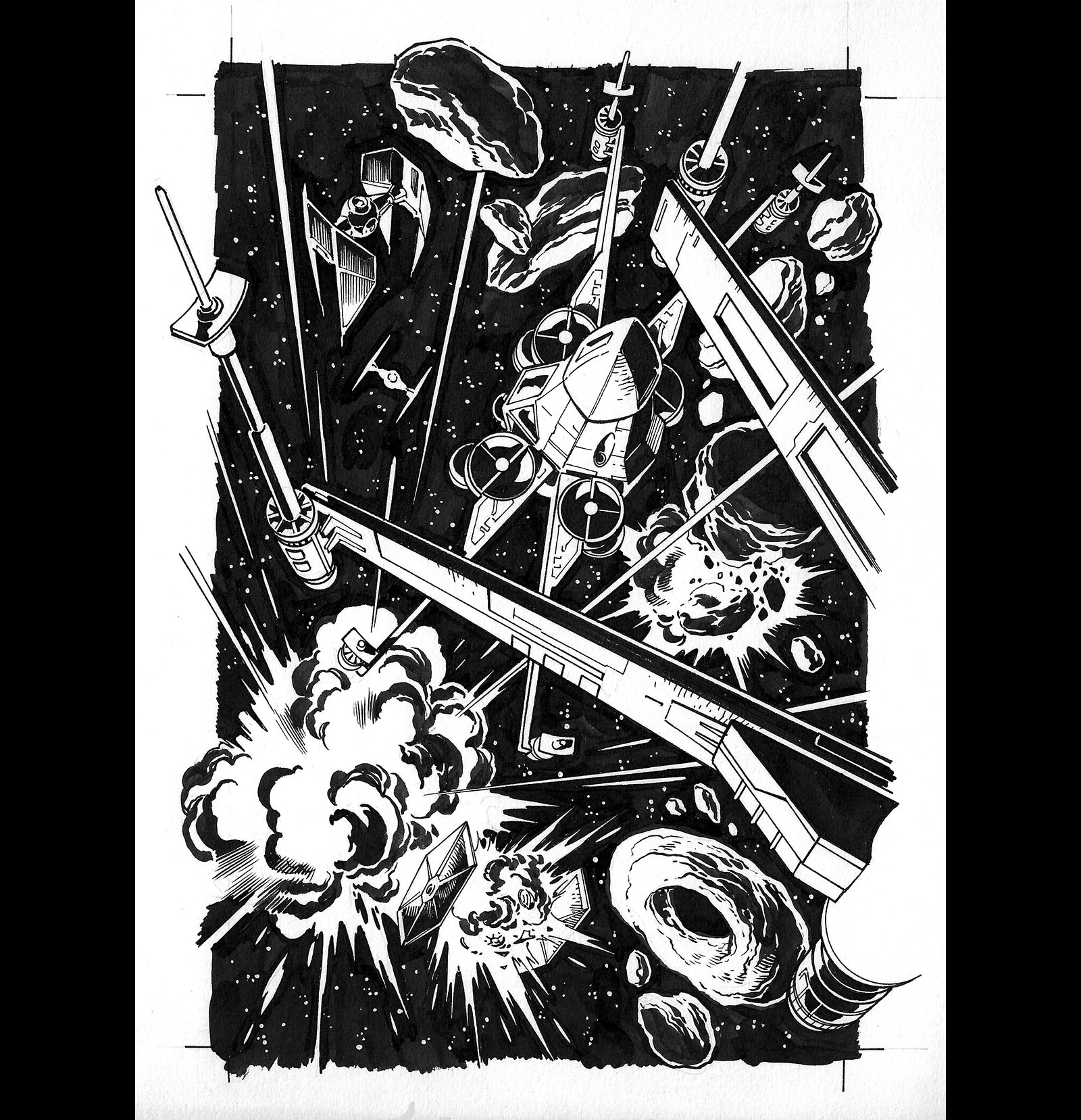 The art above already appeared in “Dead End Art Vol. 2” but I’m bringing it up again to expand on that story. Dark Horse comics got the license to Star Wars in 1991, but slots were very limited and it took them a while to expand the line. When they announced an X-Wing Rogue Squadron series, I thought it was high time to throw my hat in. So I drew the pieces above and below as sample art and submitted them. 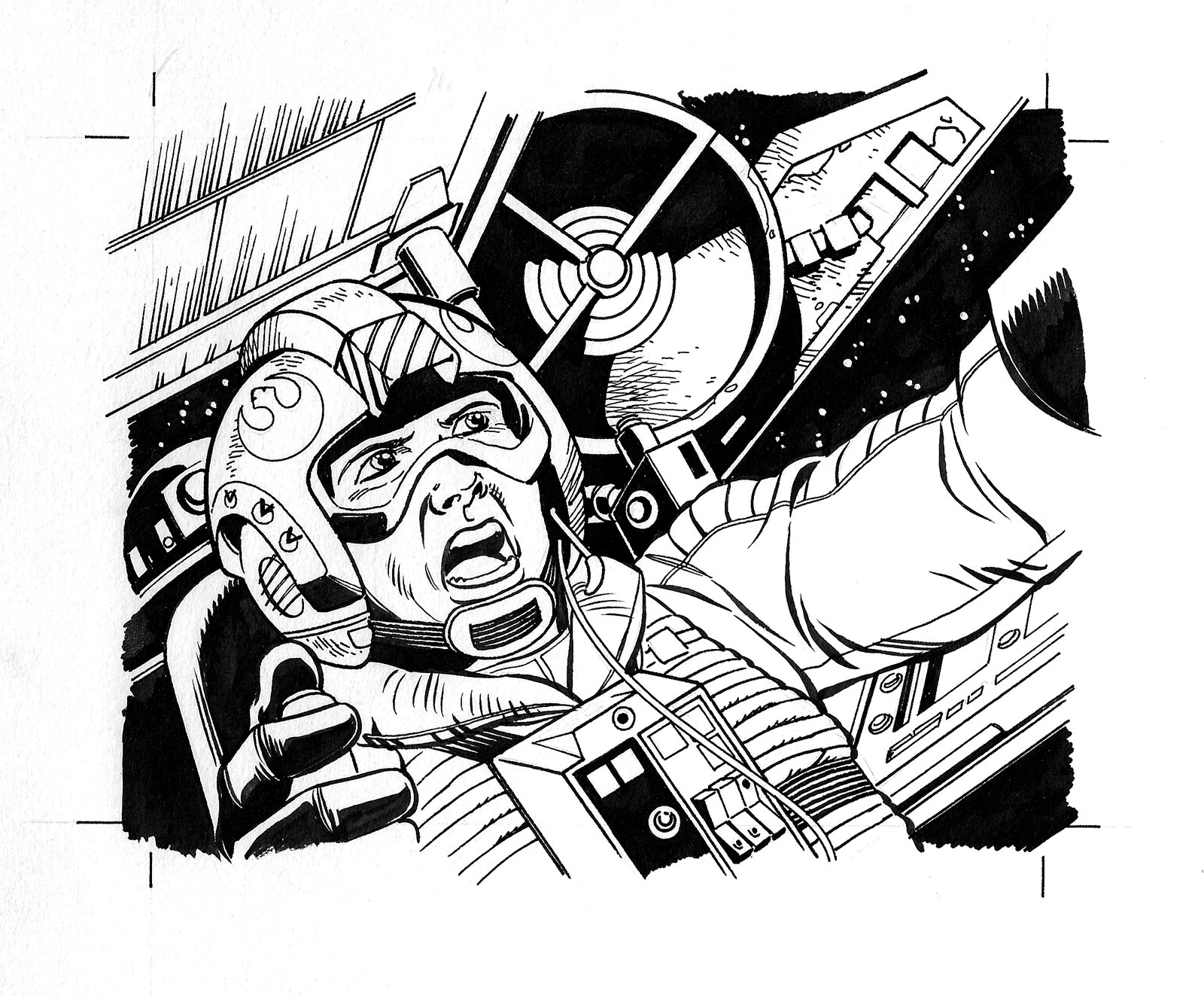 Then I decided to go all out and draw an entire self-contained six-page story using Dark Horse’s Tales of the Jedi banner. It had Mandalorians and everything. Where do you think it went? Read the story, then I’ll tell you. 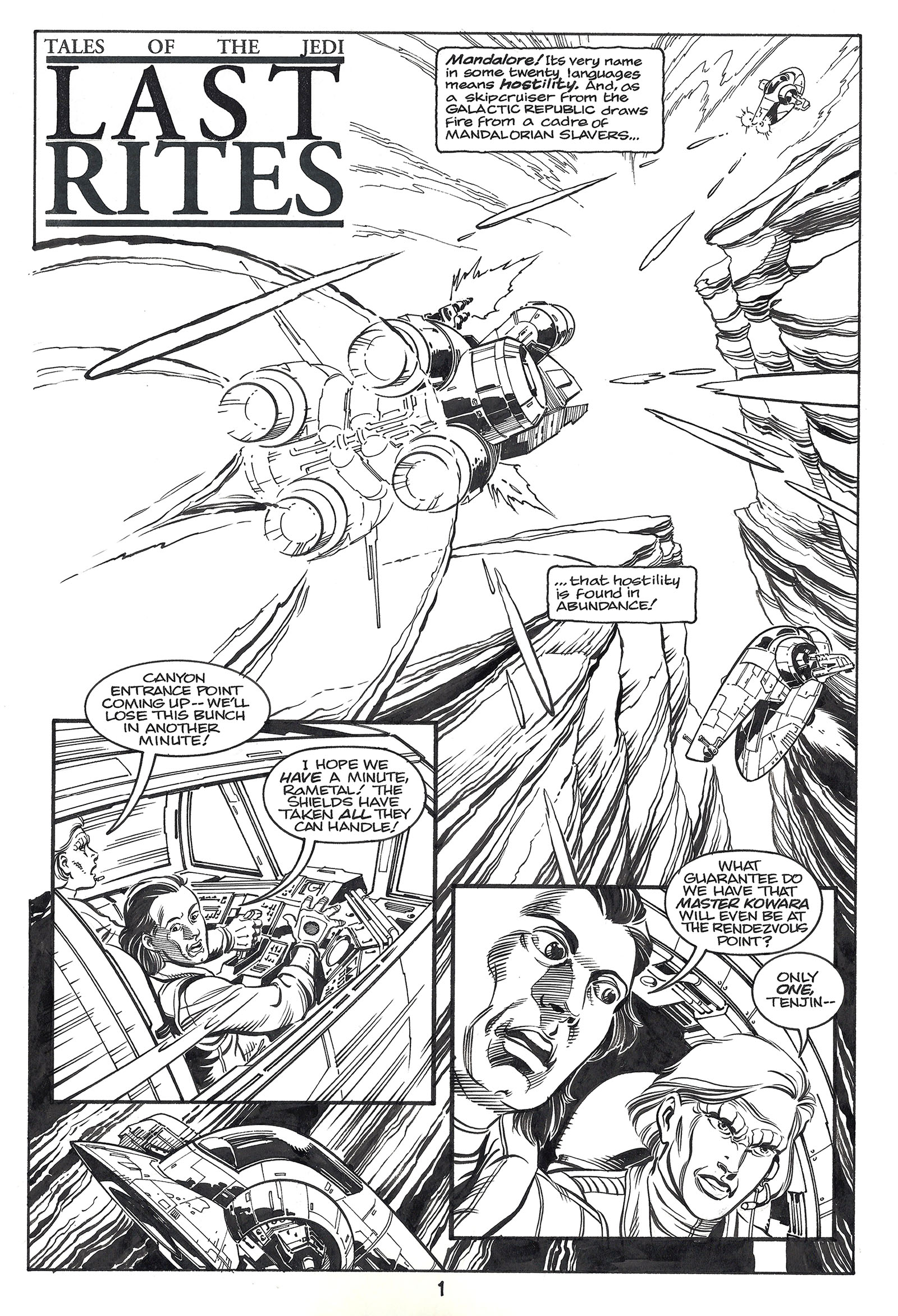 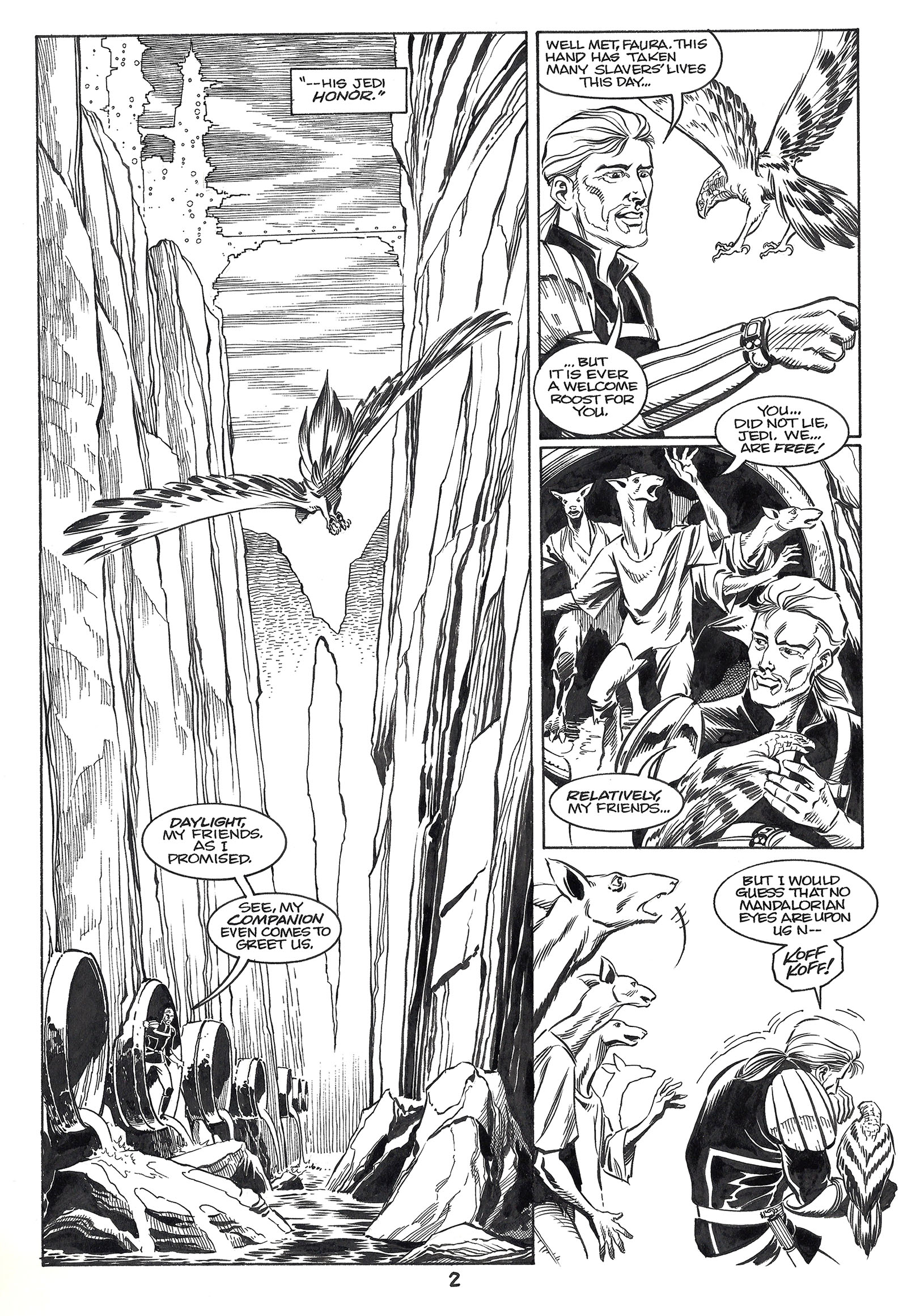 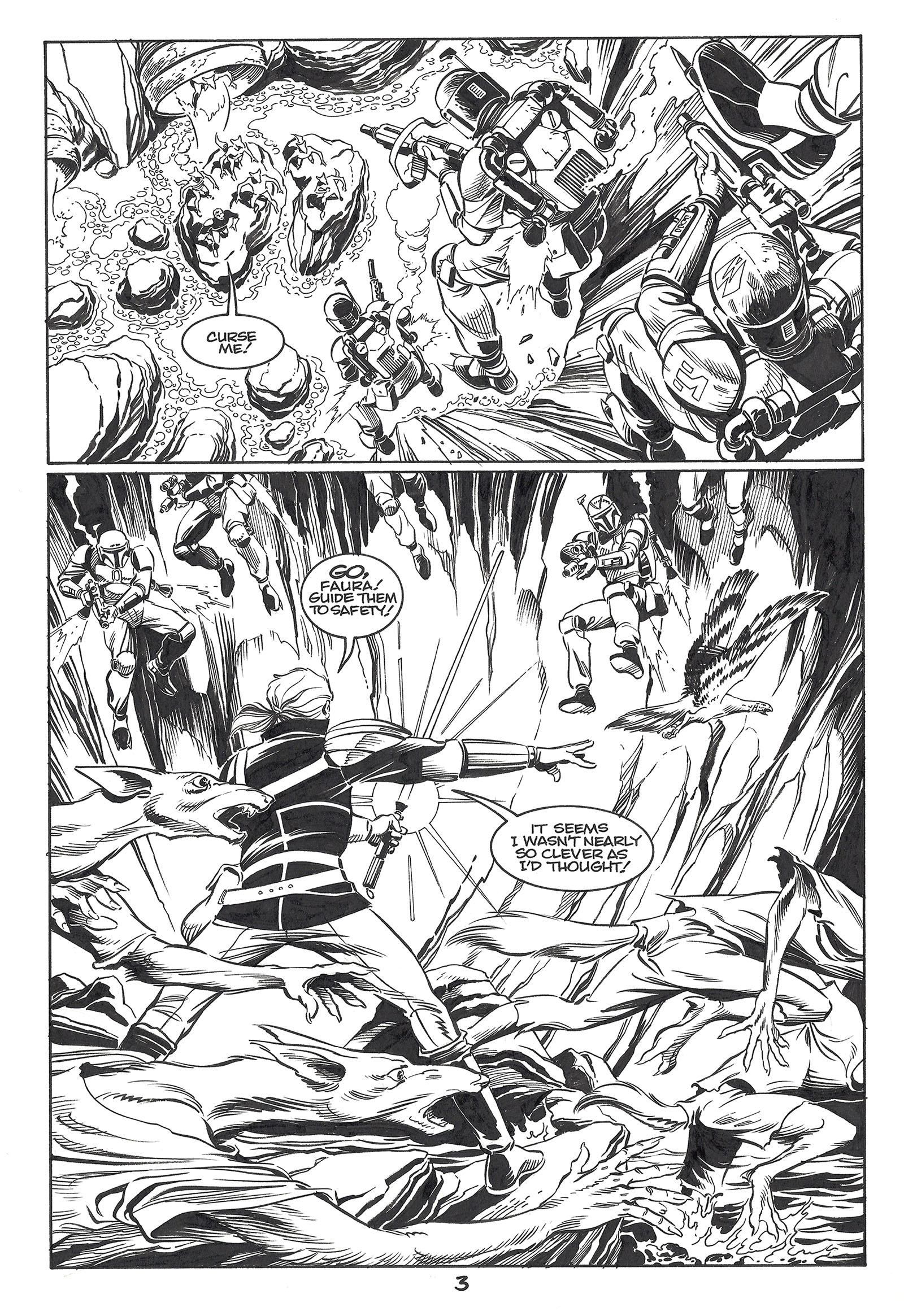 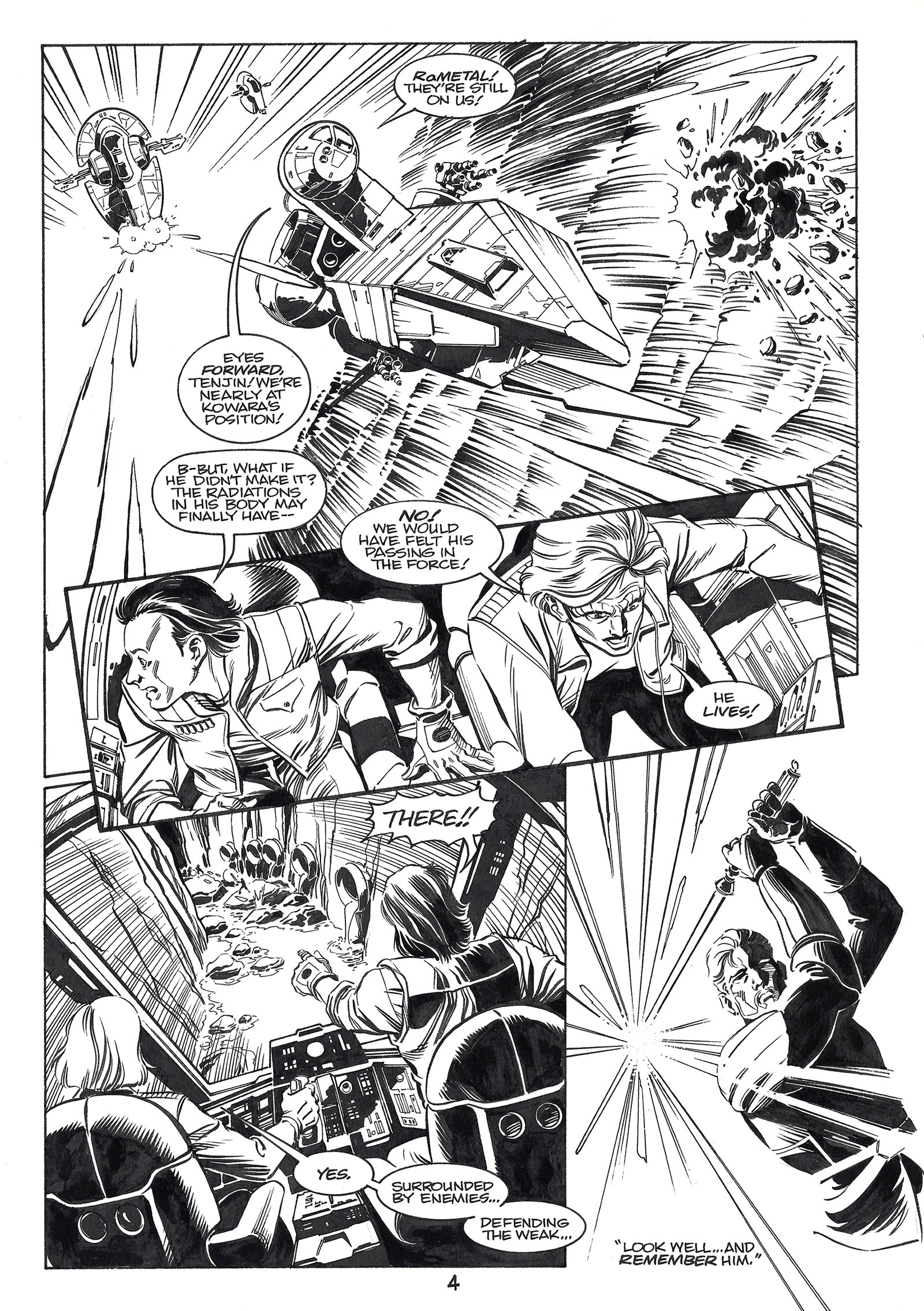 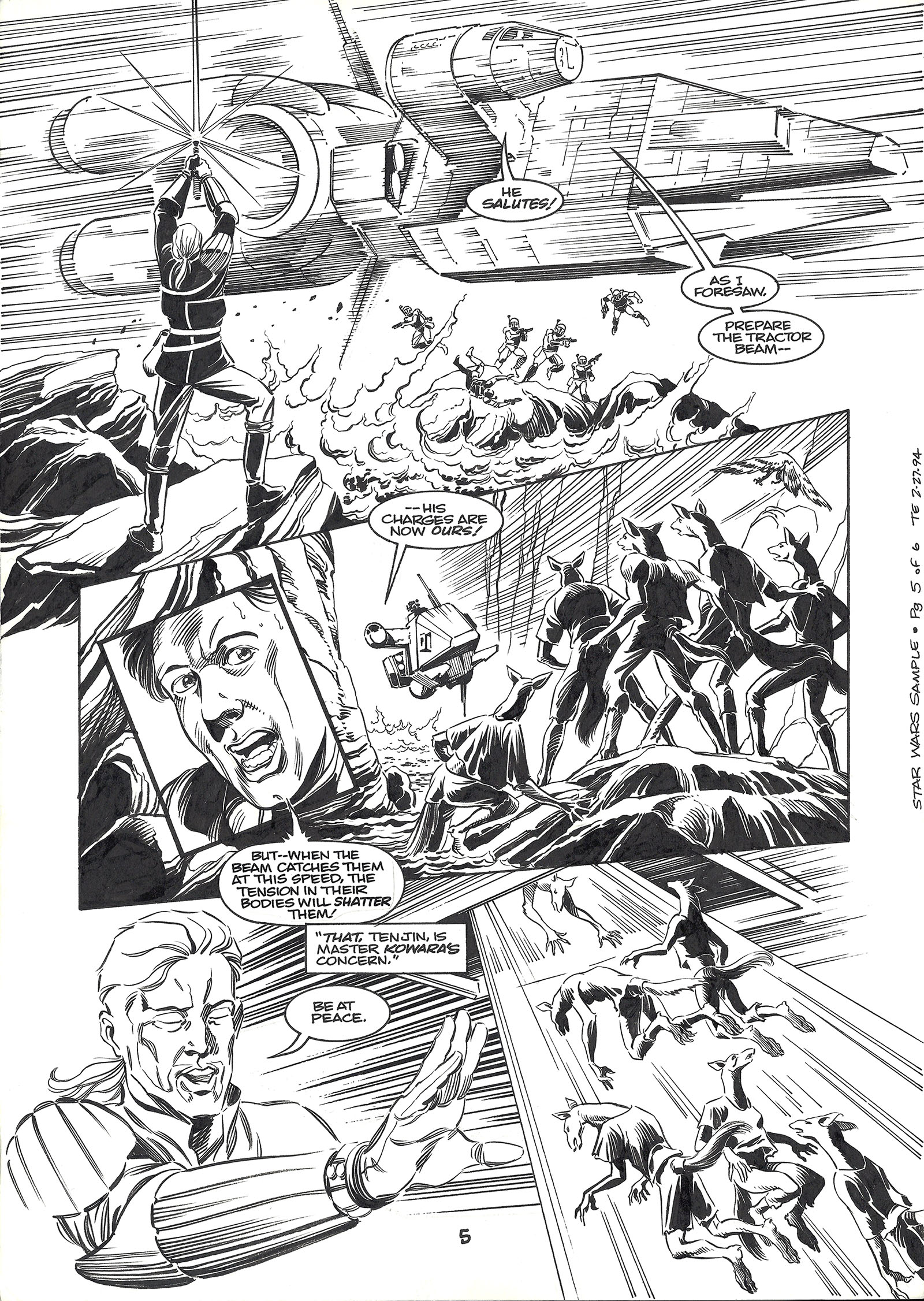 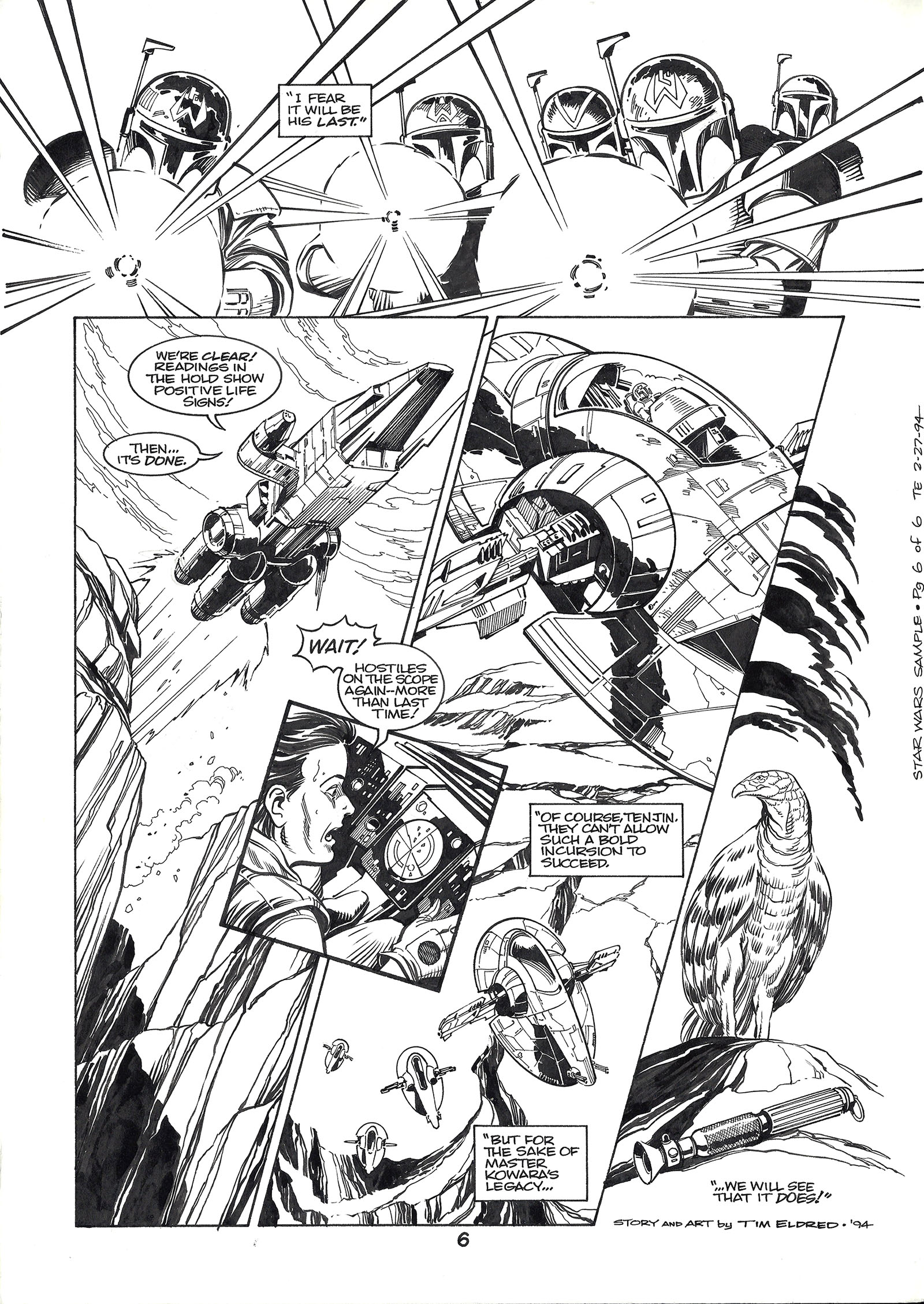 Since the title of this article is “Dead End Art,” you already know where it went. Straight into my portfolio and out of public view until I launched this website. I didn’t even send it to Dark Horse, because they never sent me a release form to sign. I figured that was the same as a turndown and moved on with my life.

Design concepts for the comic shown below. 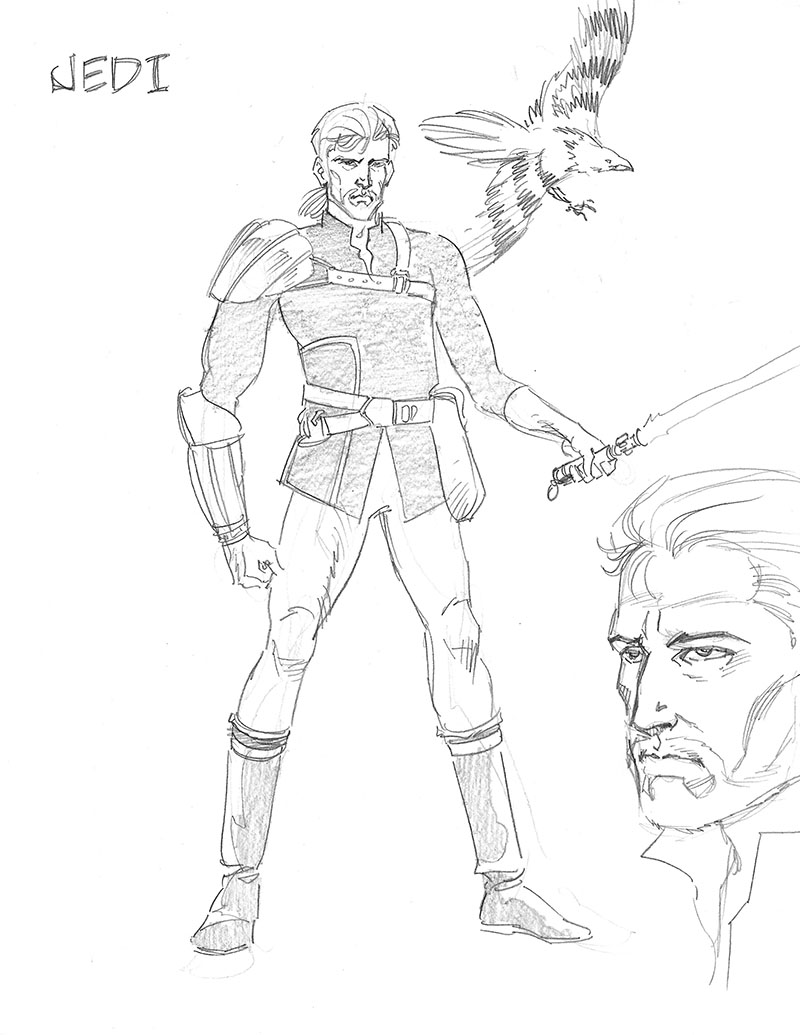 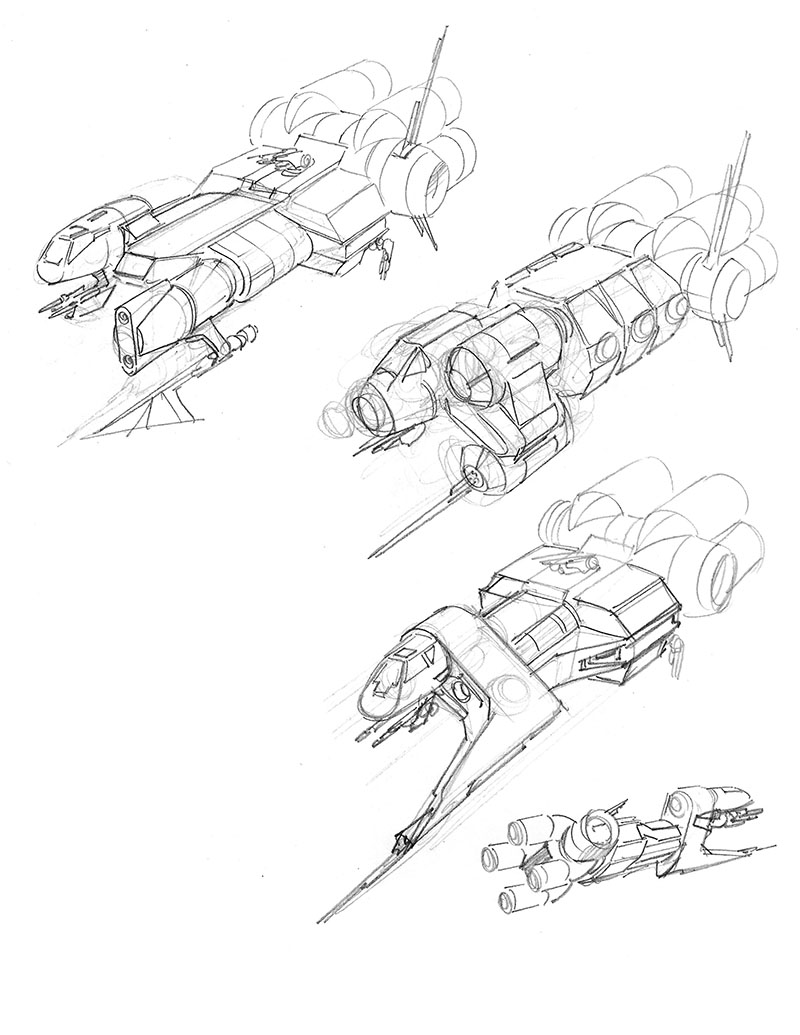 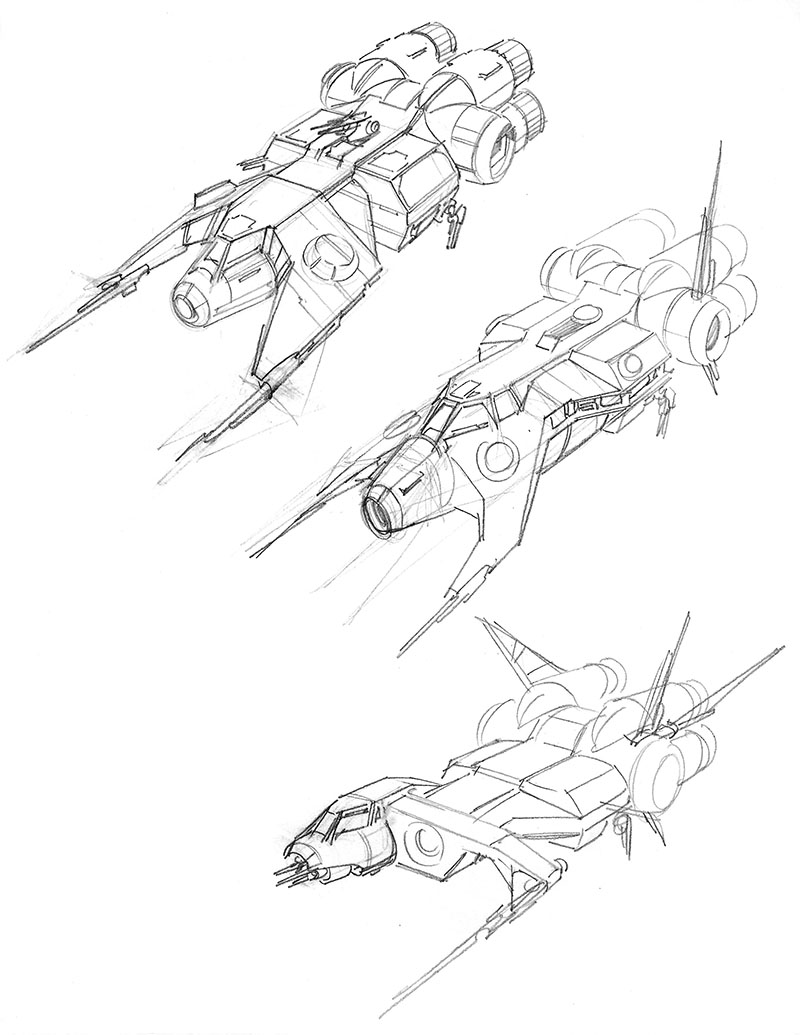 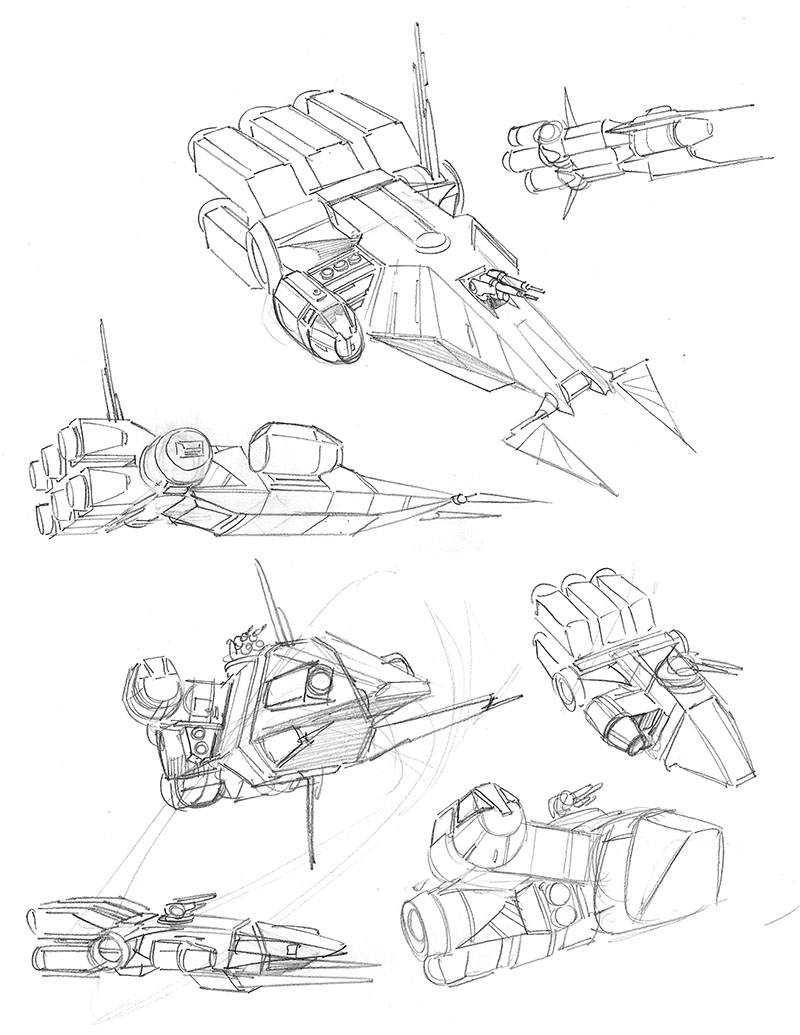 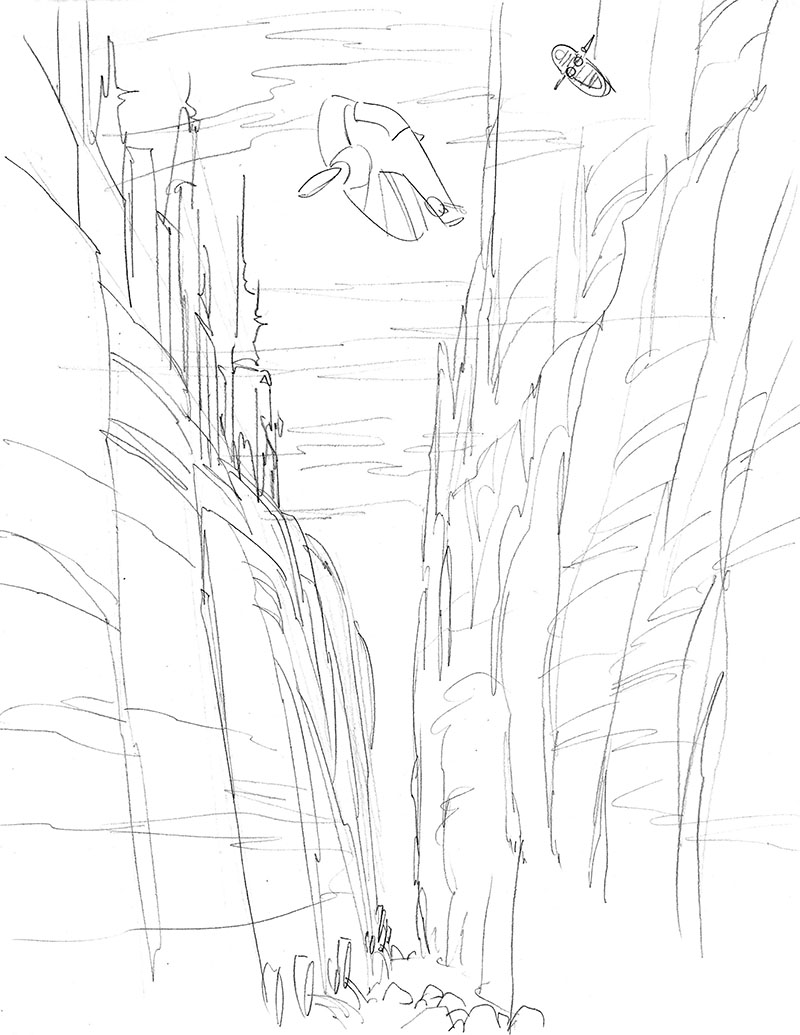 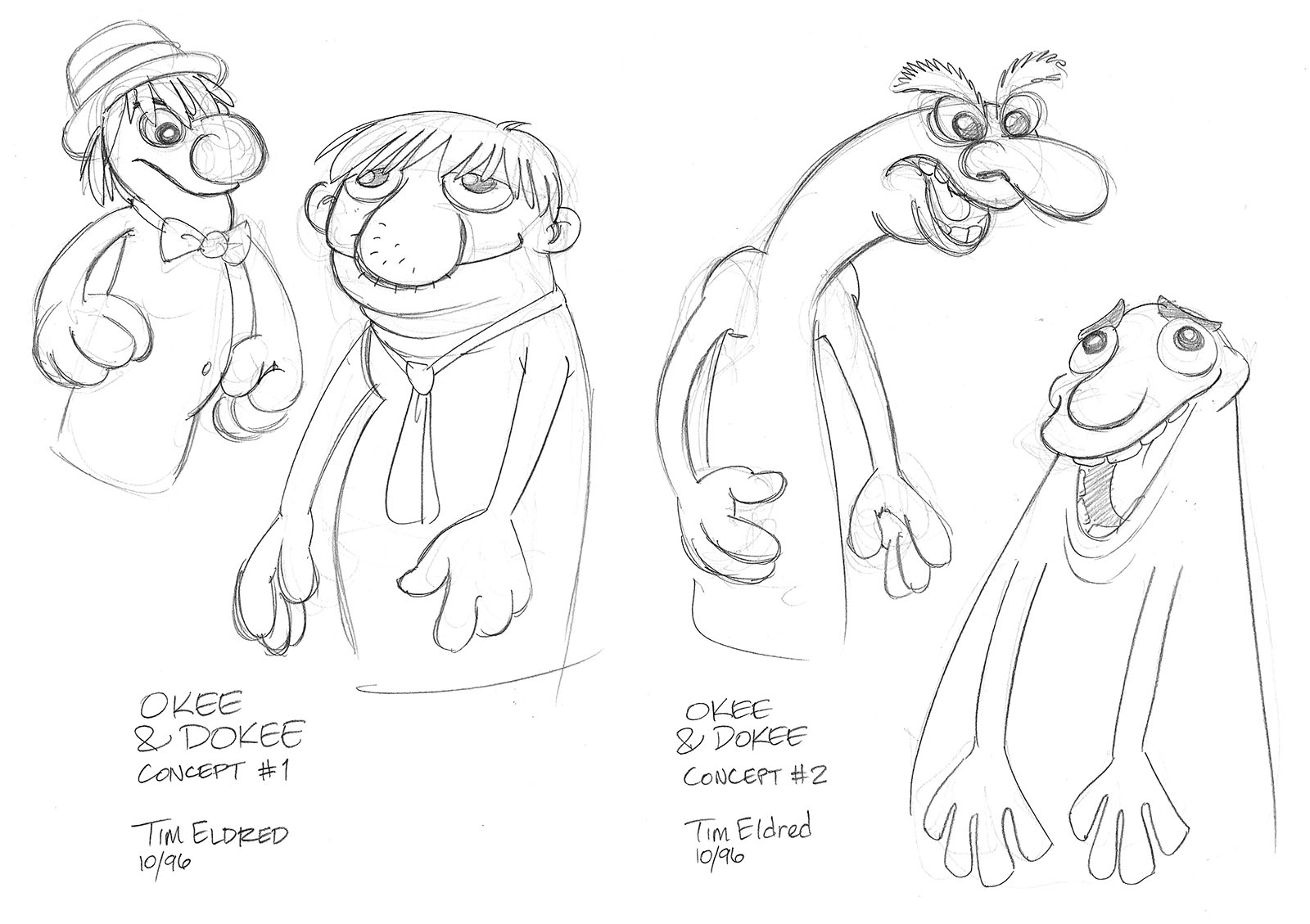 1996 was the year I transitioned from comics into TV animation. My agent sent me around to various studios whenever he found an opportunity for work, and this was an unusual one. The Okee and Dokee Show was a concept being developed by Krofft studio, sort of like Toy Story but with puppets who come alive after work hours. They were looking for puppet design ideas, so I came up with a bunch.

I have no memory of what happened with this. It definitely didn’t lead to me getting any work from Krofft, and I don’t see any evidence online of the show being made, so…another dead end. But it was fun and different to think about how a design might end up being built out of real materials, so drawing these was an interesting exercise. 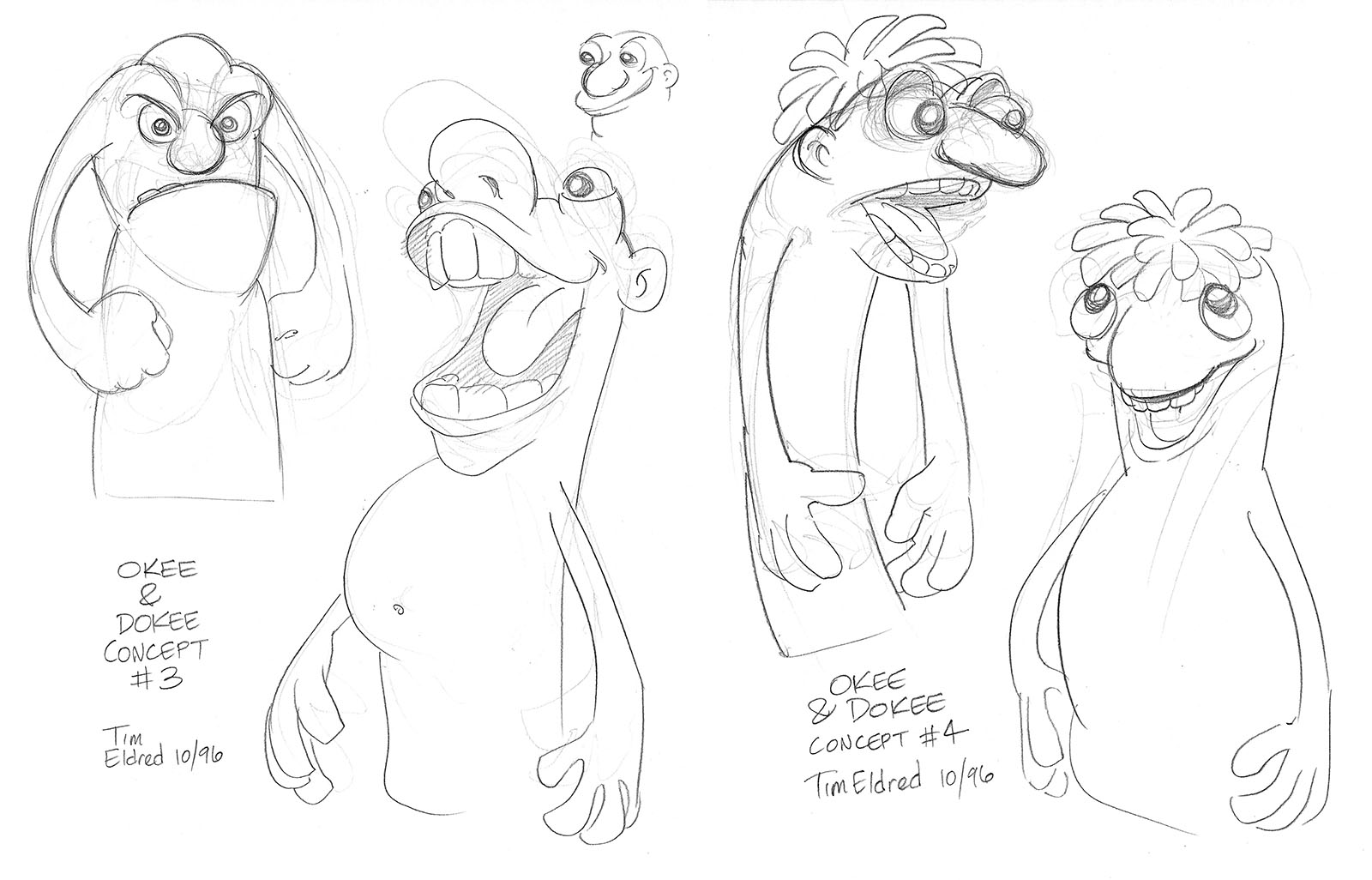 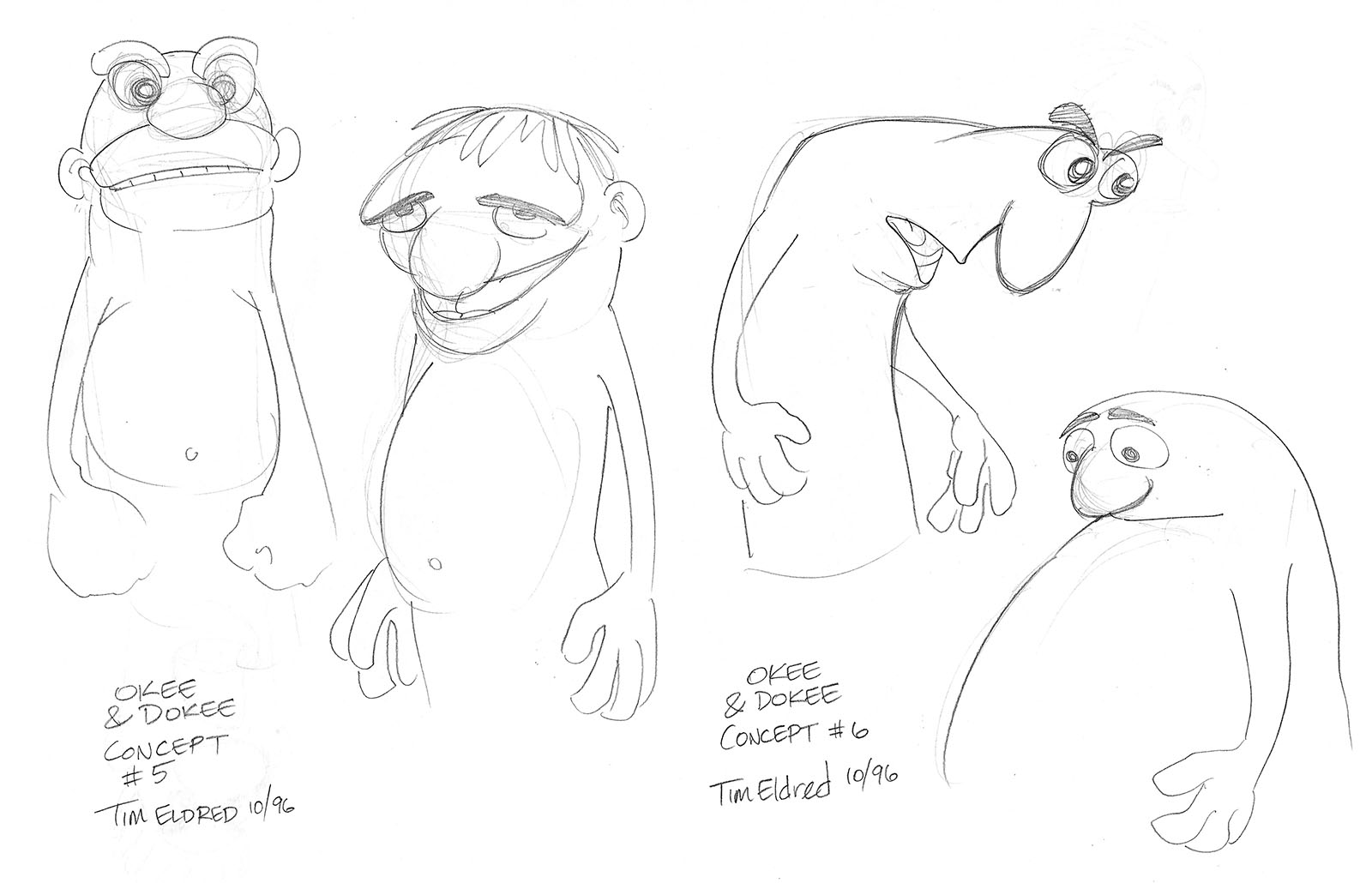 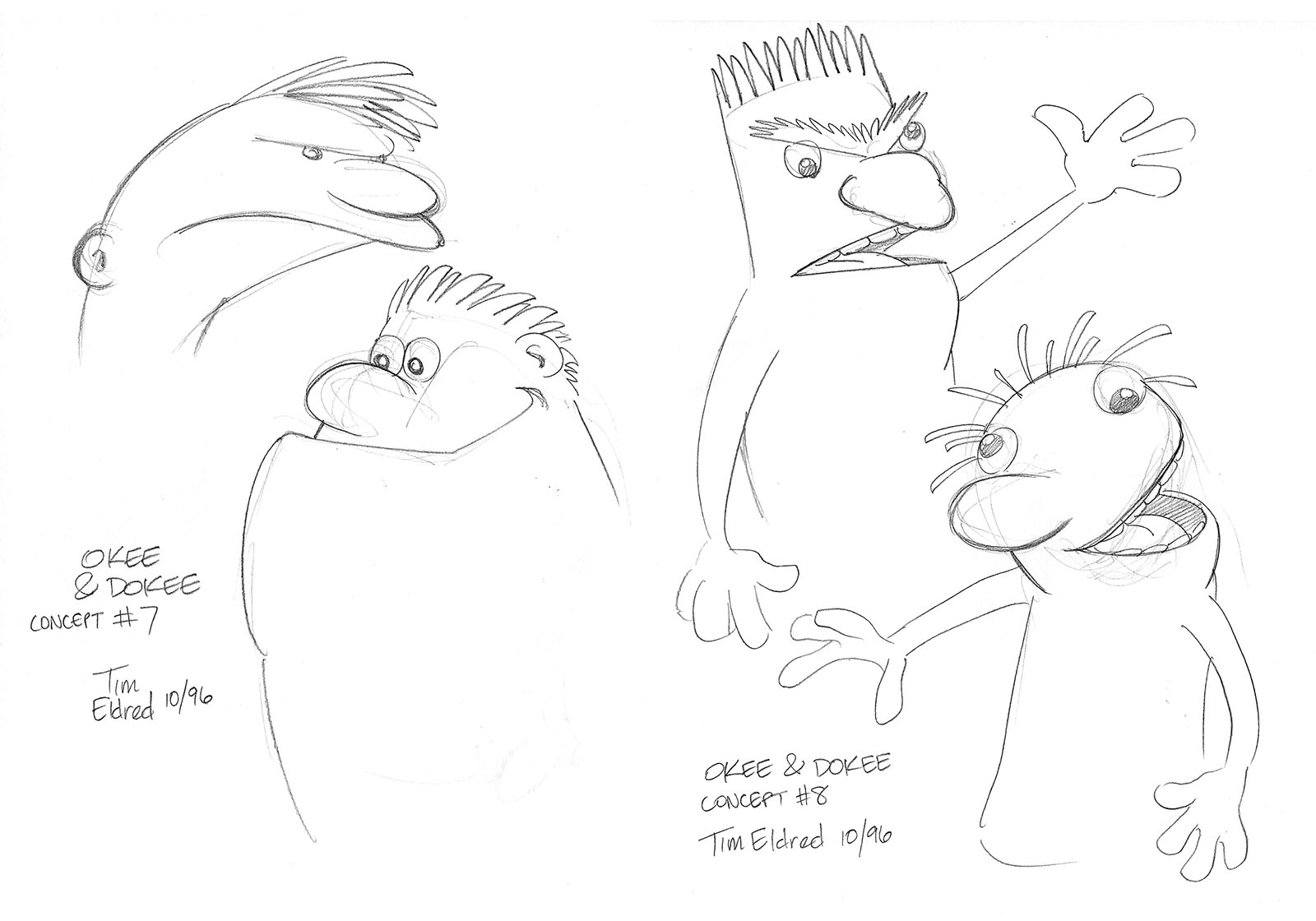 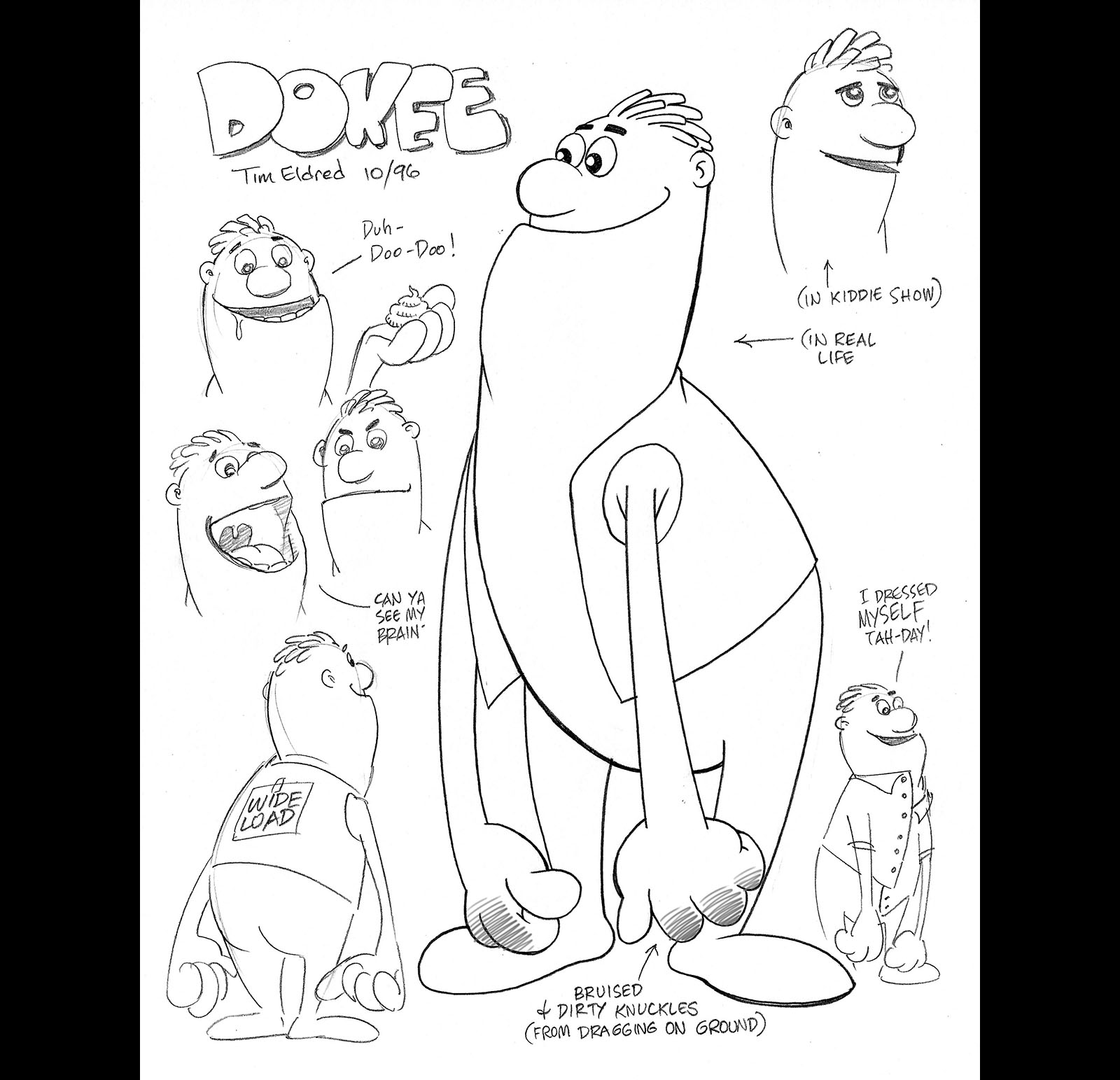 These were the designs I ultimately landed on for expansion. They were, in fact, derived from the “Loserville” menagerie. If that name doesn’t ring a bell, click here to investigate. 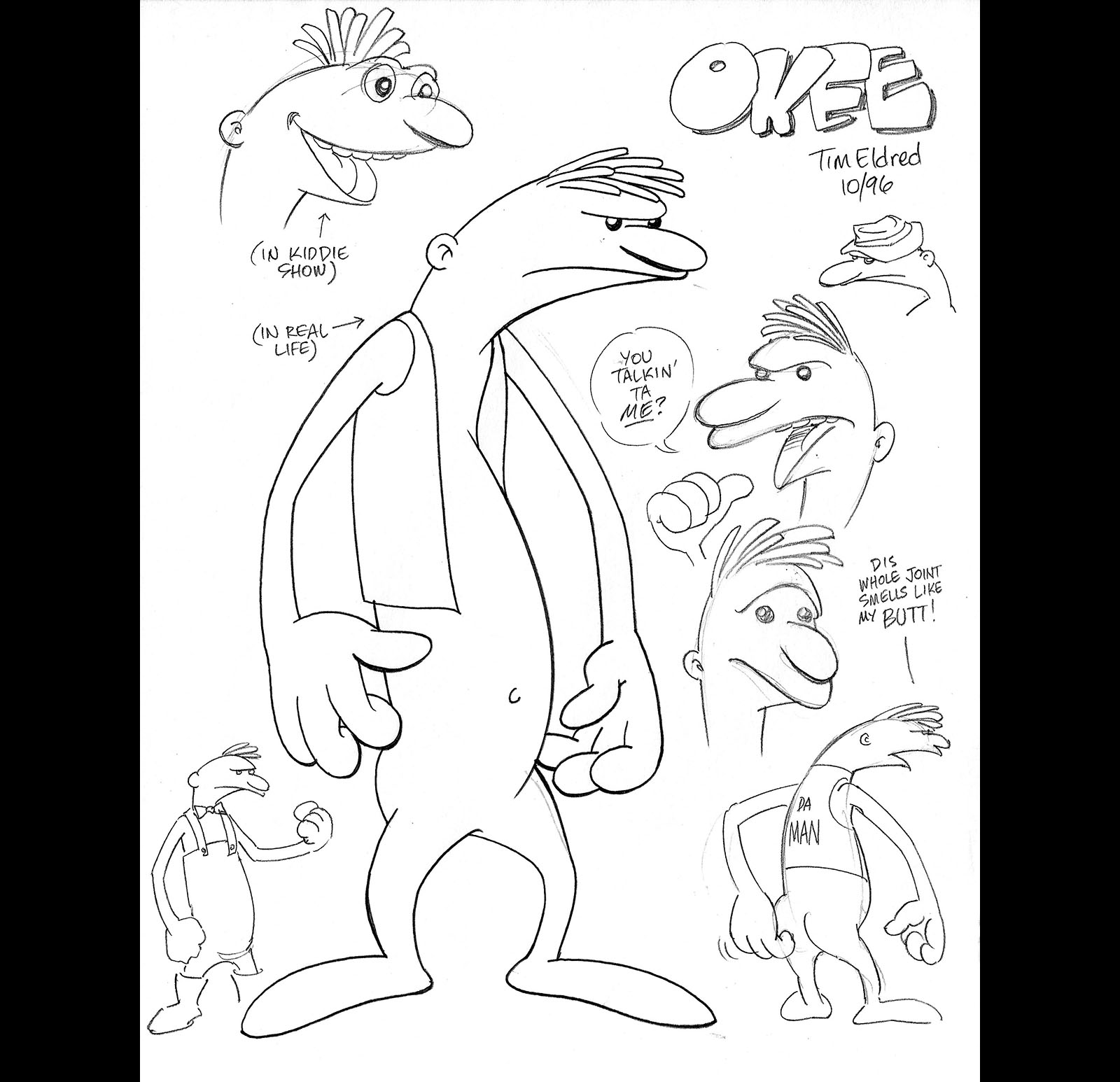