Here’s some more from the vault of unsuccessful bids to seek out work.

On some alternate Earth, maybe I got the job. I’d like to check in with that version of me to see if it made anything different in the long run. You can’t help but harbor a suspicion about “the one that got away,” whether it’s a job or a home or even another person. It represents unknowable potential that you inevitably build up in your head as something “better.”

What I know for sure is that everything I drew improved my life in some way. Even if it just gave me something to share with you here. 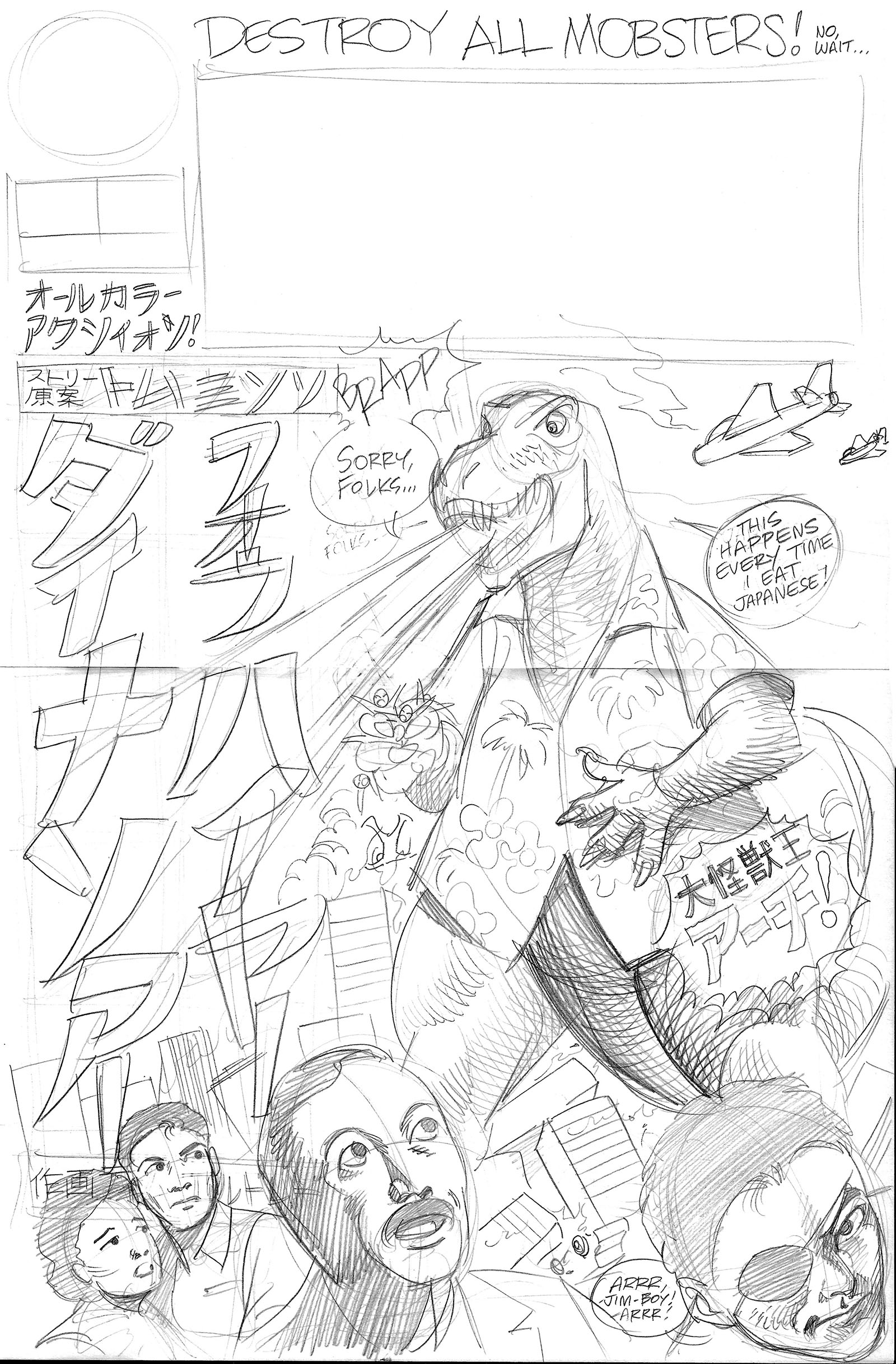 While I was drawing regular comics for Malibu under the Eternity imprint (from 1989 to ’94ish), another title they had going month after month was this one. It was a satirical comic in the vein of Teenage Mutant Ninja Turtles, featuring four dinos (actually, aliens that resembled dinos) rampaging around as mercenaries. It was created and written by Malibu editor Tom Mason with artists that came and went, and it became a Sega video game at one point. (Read more history here.) 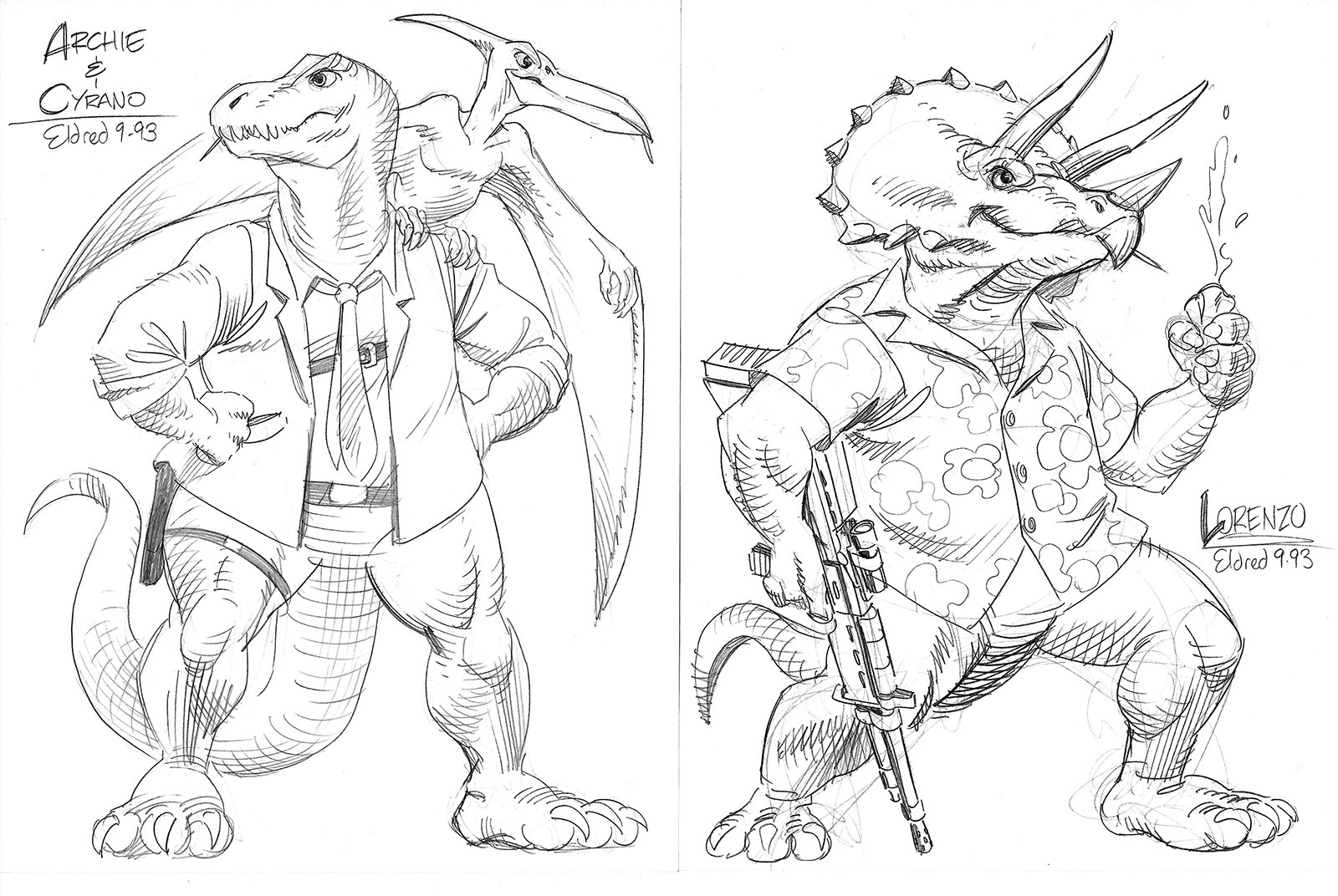 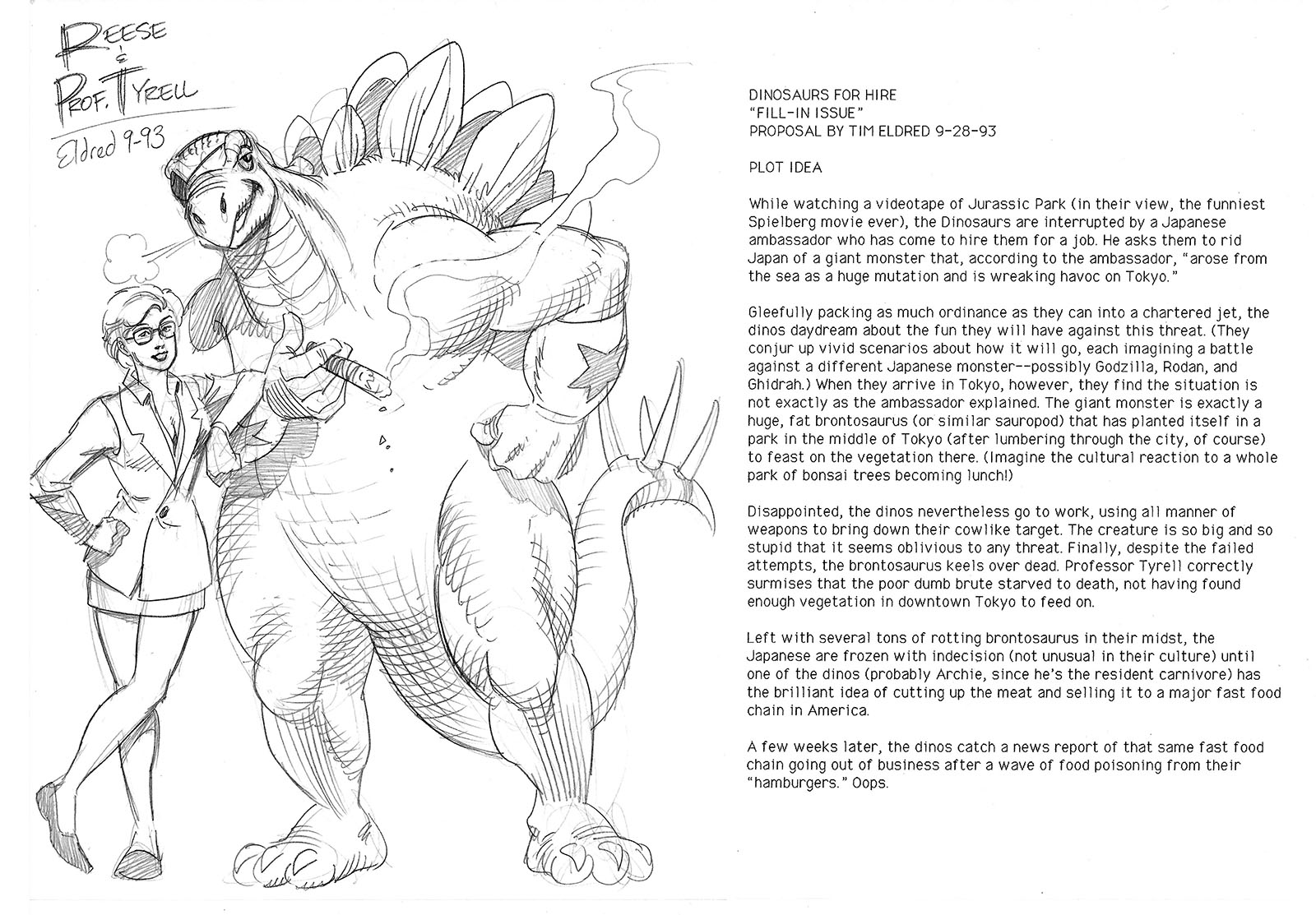 Naturally, I loved dinosaurs as a kid and I loved Godzilla movies, so I devised a way to mash them up and turned it into a single-issue proposal for Tom to write and me to draw. I turned it over to him for consideration and either heard nothing back or got a “no,” because it never came to pass. Oh, well. 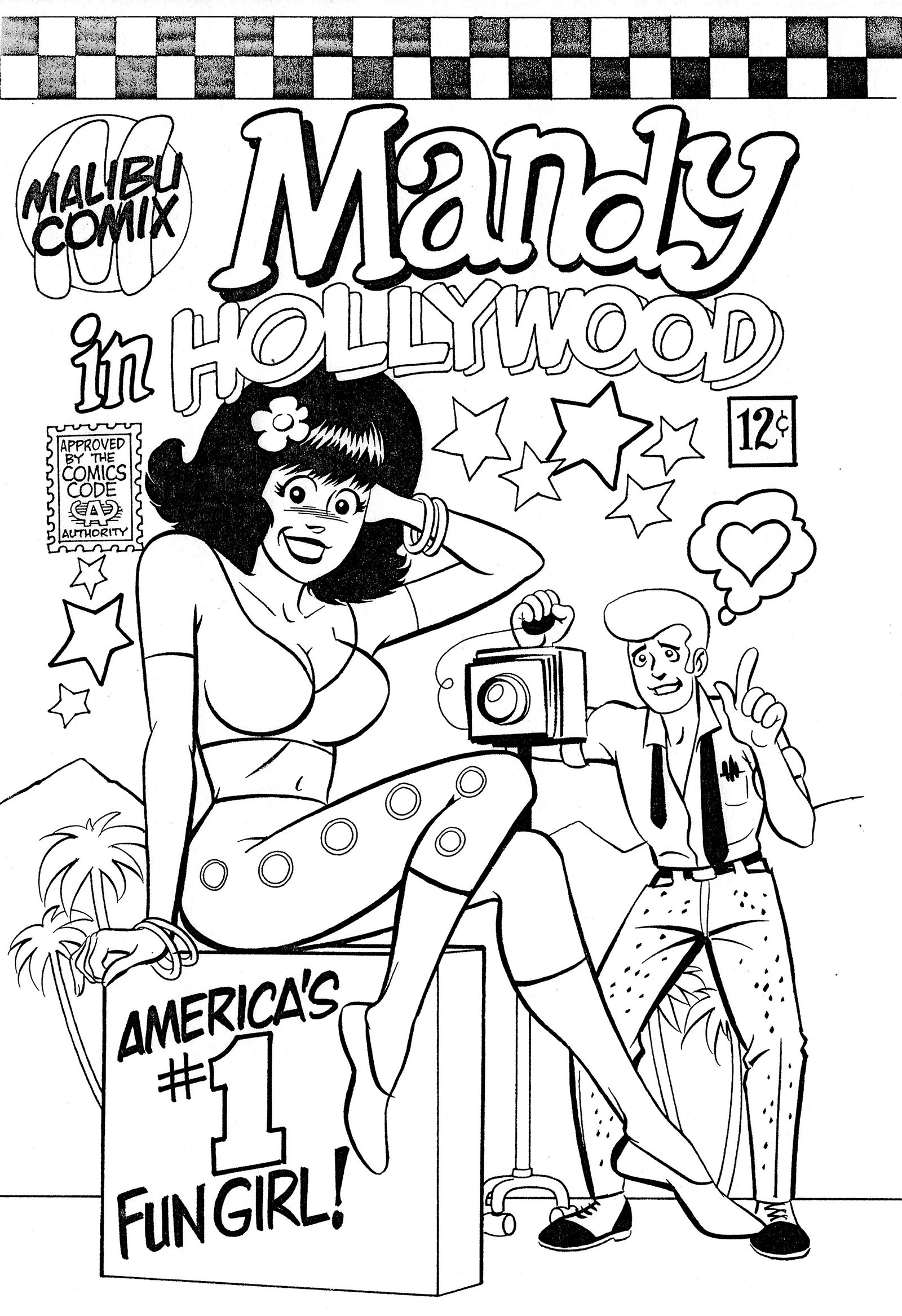 This was another odd job they asked me to do at Malibu. I think it was for a movie being written by a friend of the editors. There was going to be a montage about a starlet’s rise to fame, and one of the elements in that montage was a comic book cover done in the style of Archie. It took just a few hours, and I forgot all about it afterward. I have no idea if it ever ended up in the movie, or what that movie was called. If someone out there recognizes it, please clue me in. 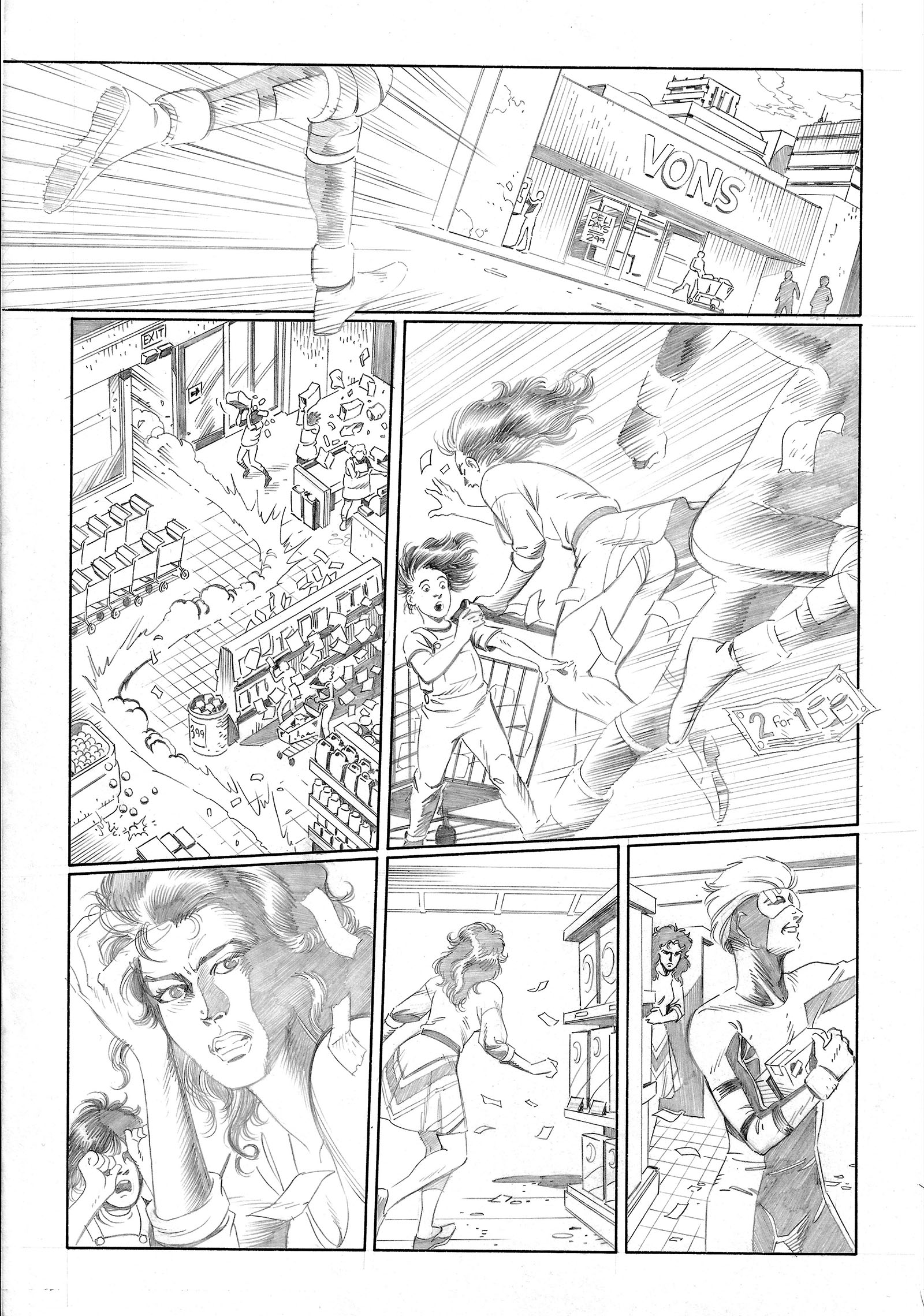 This one has an irritating story attached to it, so get comfy.

The Ultraverse was a massive (and ill-fated) project developed by Malibu to catch hold of the early 90s superhero wave. Describing it as simply as I can, a bunch of Marvel artists defected from Marvel in ’91 to form their own superhero comics company called Image. They debuted in ’92 and scored big sales despite the very uneven quality of their product line (don’t get me started). Other companies saw this and decided to do the same, glutting the market and leading to a crash in late ’93. 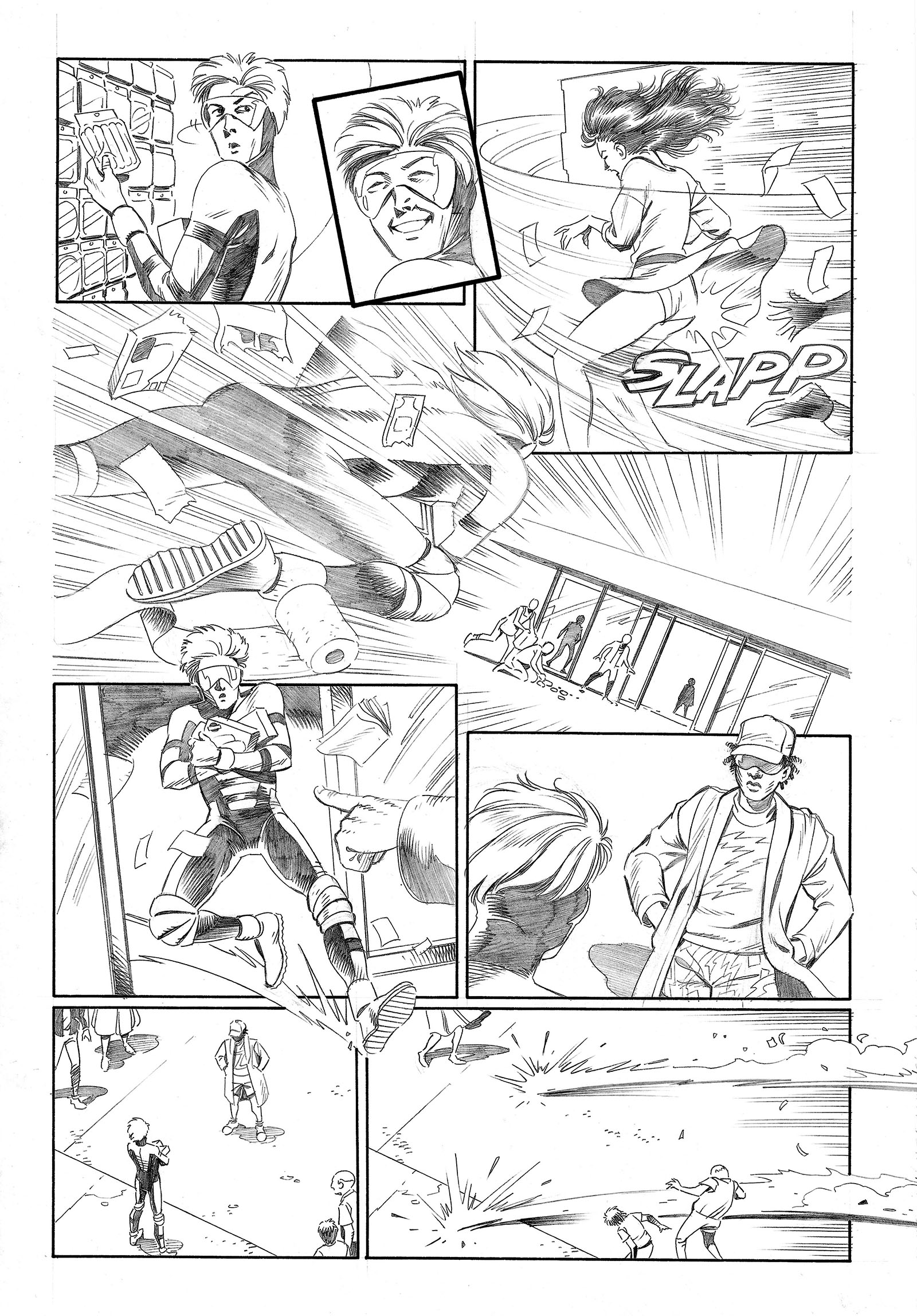 Malibu’s version of this was called the Ultraverse, a line of interlinked titles that sort of did OK at first, but started to collapse about a year later. I was on staff at the time, so I got to watch it from inside the bubble, and it wasn’t pretty. Before the downturn, I was toiling away on Robotech comics and looking for something with more visibility. At the time, it seemed like getting to pencil an Ultraverse title would be a step up, so I started campaigning to land one. 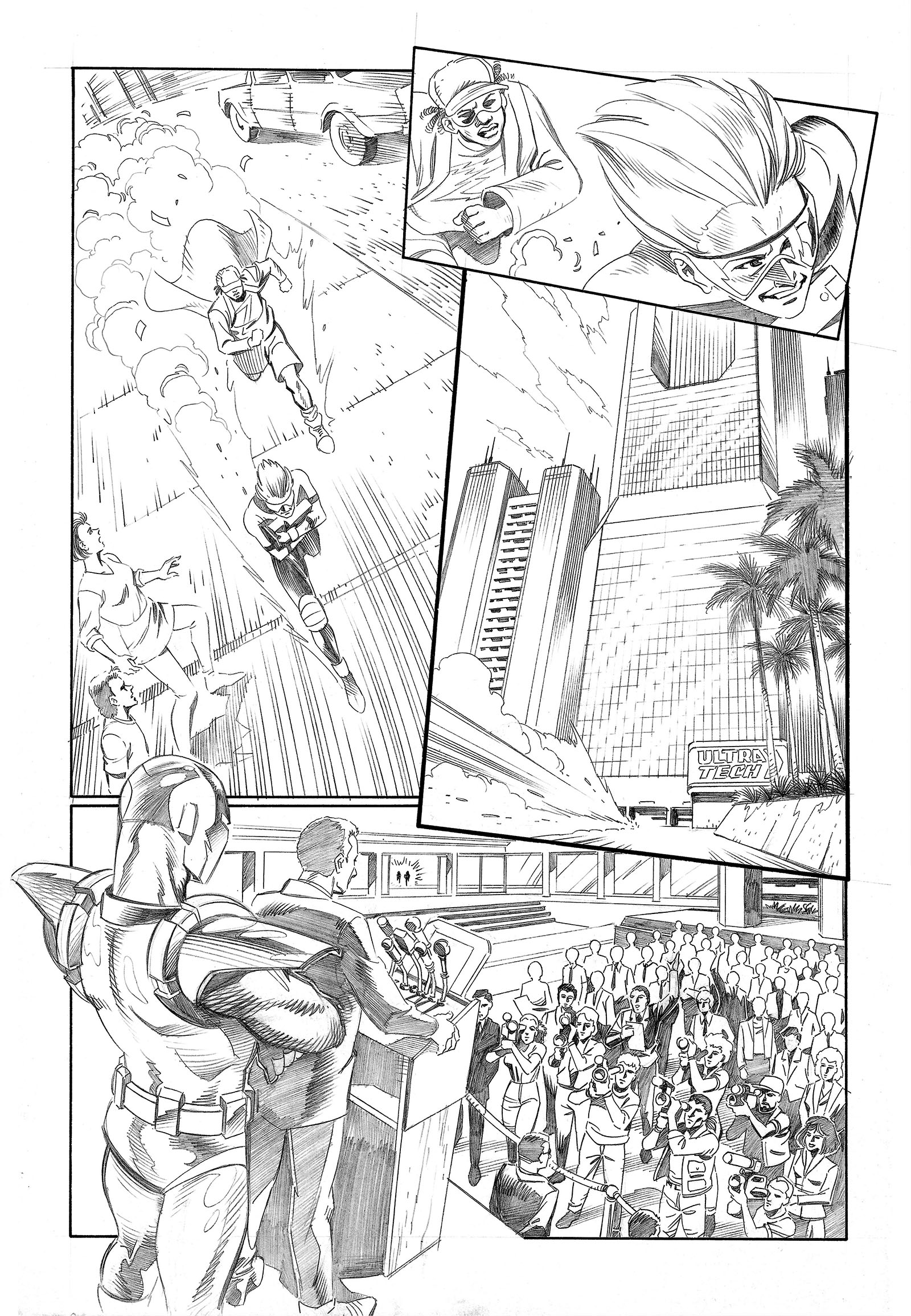 This led to a battle of wills. The editor-in-chief didn’t see me as a superhero artist, but I watched a lot of not-very-good superhero art coming through the door and knew I could do better. I’ve always thought art spoke louder than words, so I created a 6-page sample story (on my own time) that played entirely without words. The plot was simple; two speedster characters bump into each other and decide to race. They slam through the city, inconveniencing others. The point was to show that I could handle the style and storytelling these comics demanded. 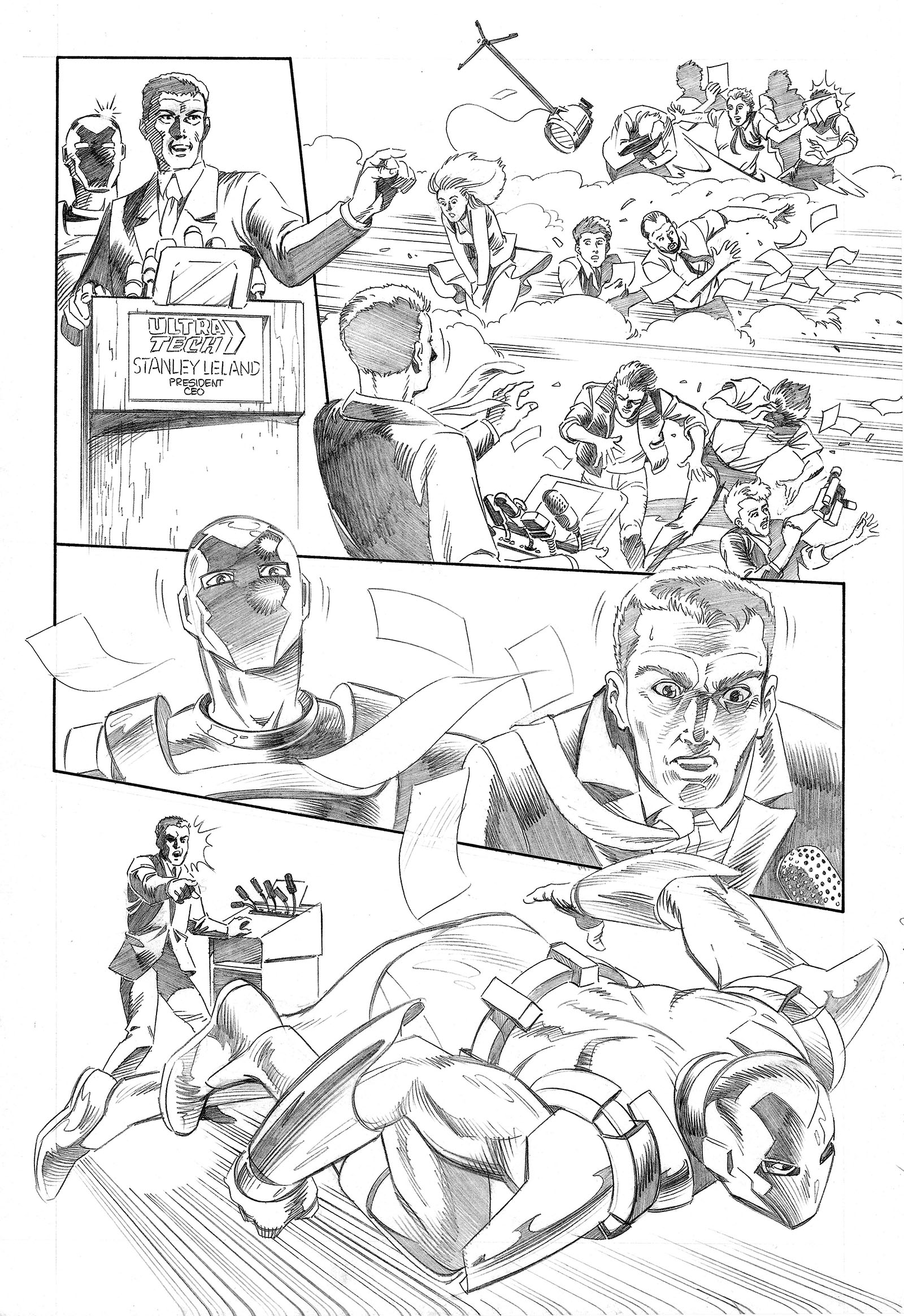 I finished the sample and it got passed around the office. Everyone was wowed by it EXCEPT the editor-in-chief, who – I guess – felt like if he said “yes” he would lose the argument. I had already been losing respect for him at a steady pace due to increasingly bad decisions, and this didn’t help. As the head of the art department, I saw every single page that came in from freelancers, and in my view some of it was just plain incompetent. 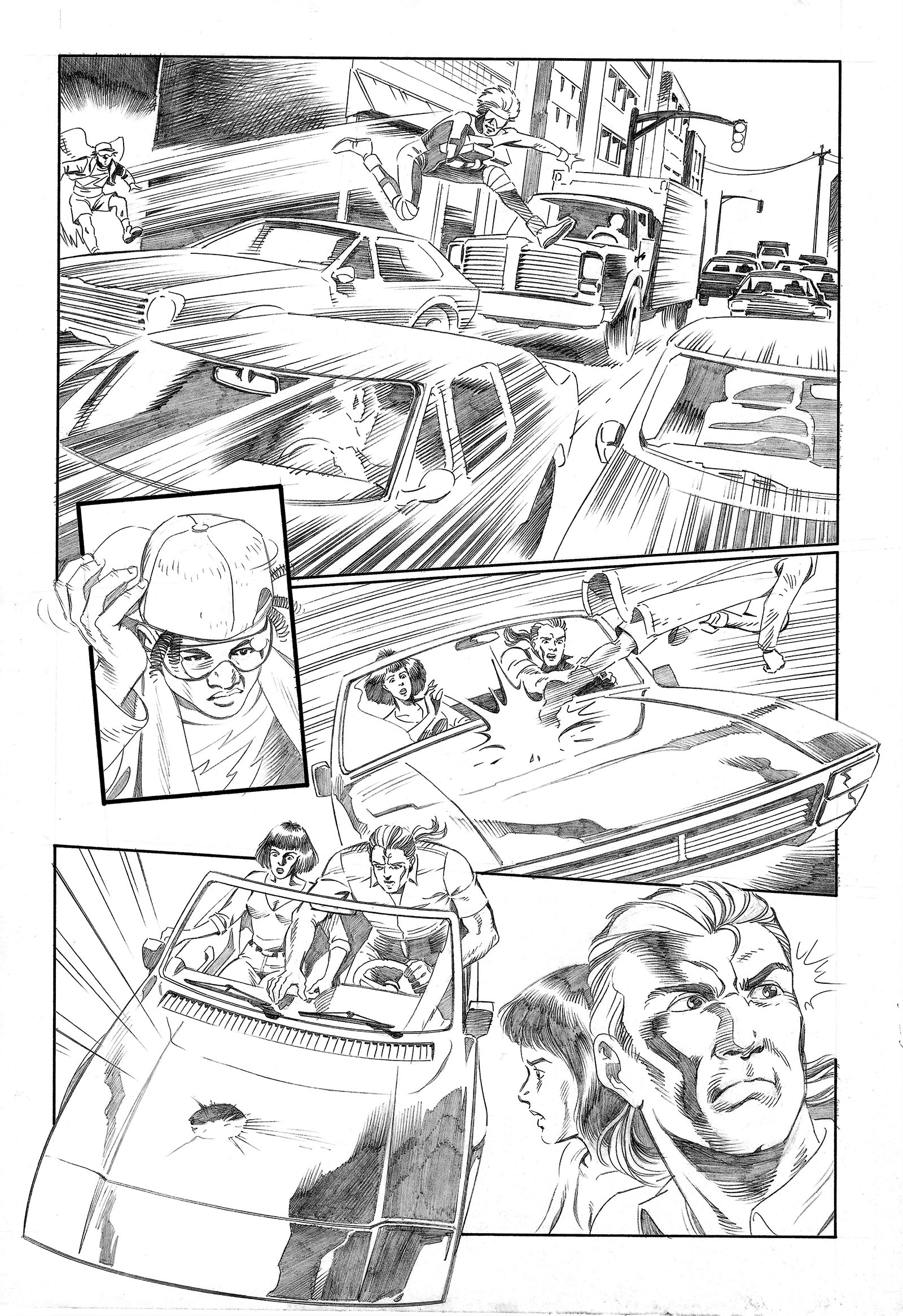 When I made that case to him, this actually came out of his mouth in response: “Tim, your problem is that you’re still using words like ‘competent’.”

We’d started out as allies when he first gave me a shot on Lensman in 1989. And I never let him down. I never missed a deadline and my work got steadily better from month to month. “Competent” was my credo. It’s what got me the offer to move across the country and take the job running the art department. And now it was being held against me. While I felt the room spinning, more words came out of his talking hole.

What he wanted – i.e., what he assumed readers wanted – was something “Completely NUTS.” (Direct quote) 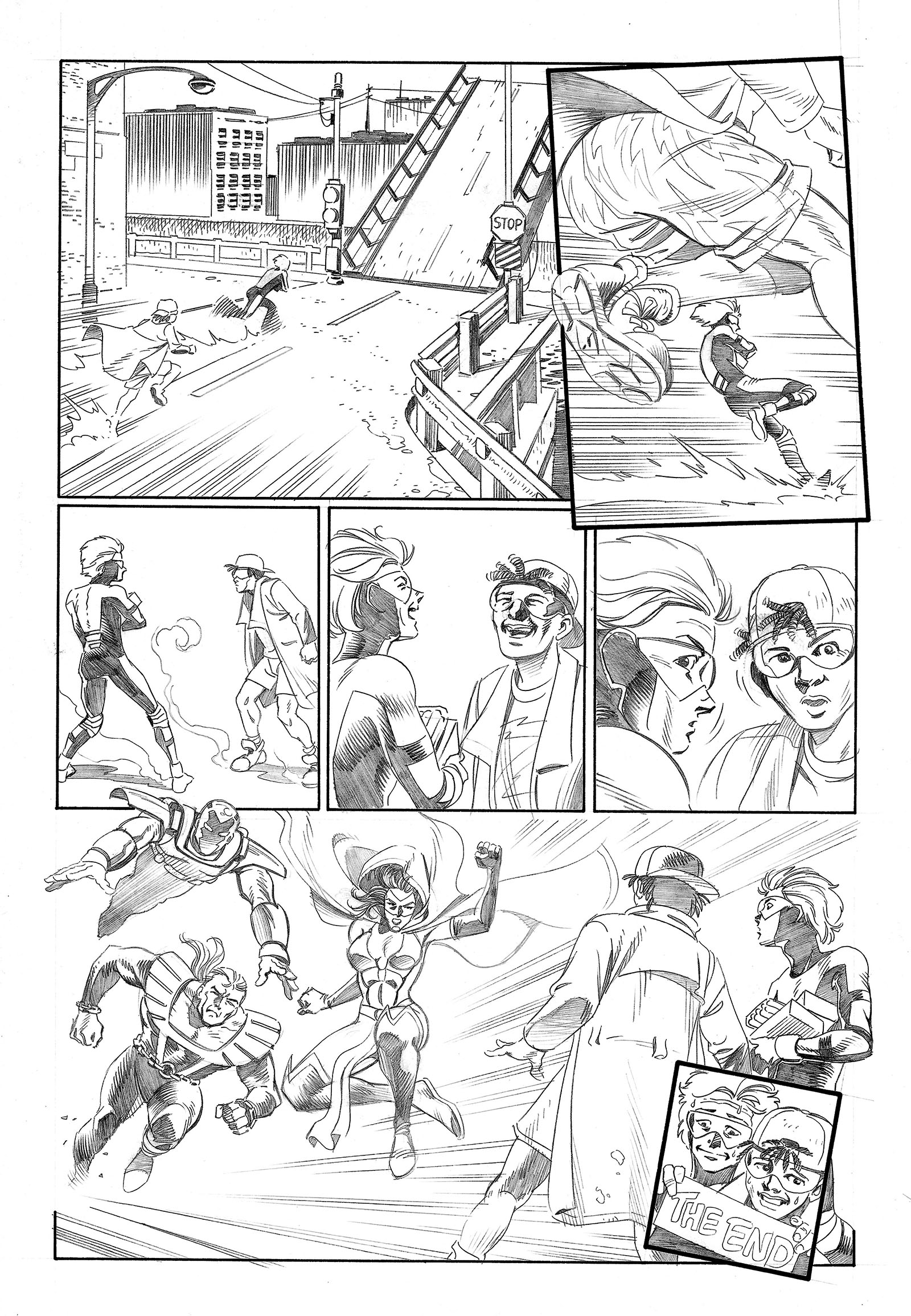 To sum it up: I turned in a sample that everyone liked, but it was COMPETENT instead of NUTS. And therefore, it was unusable. (I could mention that one of the Ultraverse writers, a long-term Marvel veteran, said he wanted to write dialogue for it, but I think I’ve already proven my point.)

So now I had a new challenge: draw another sample that was NUTS.

And here it is: 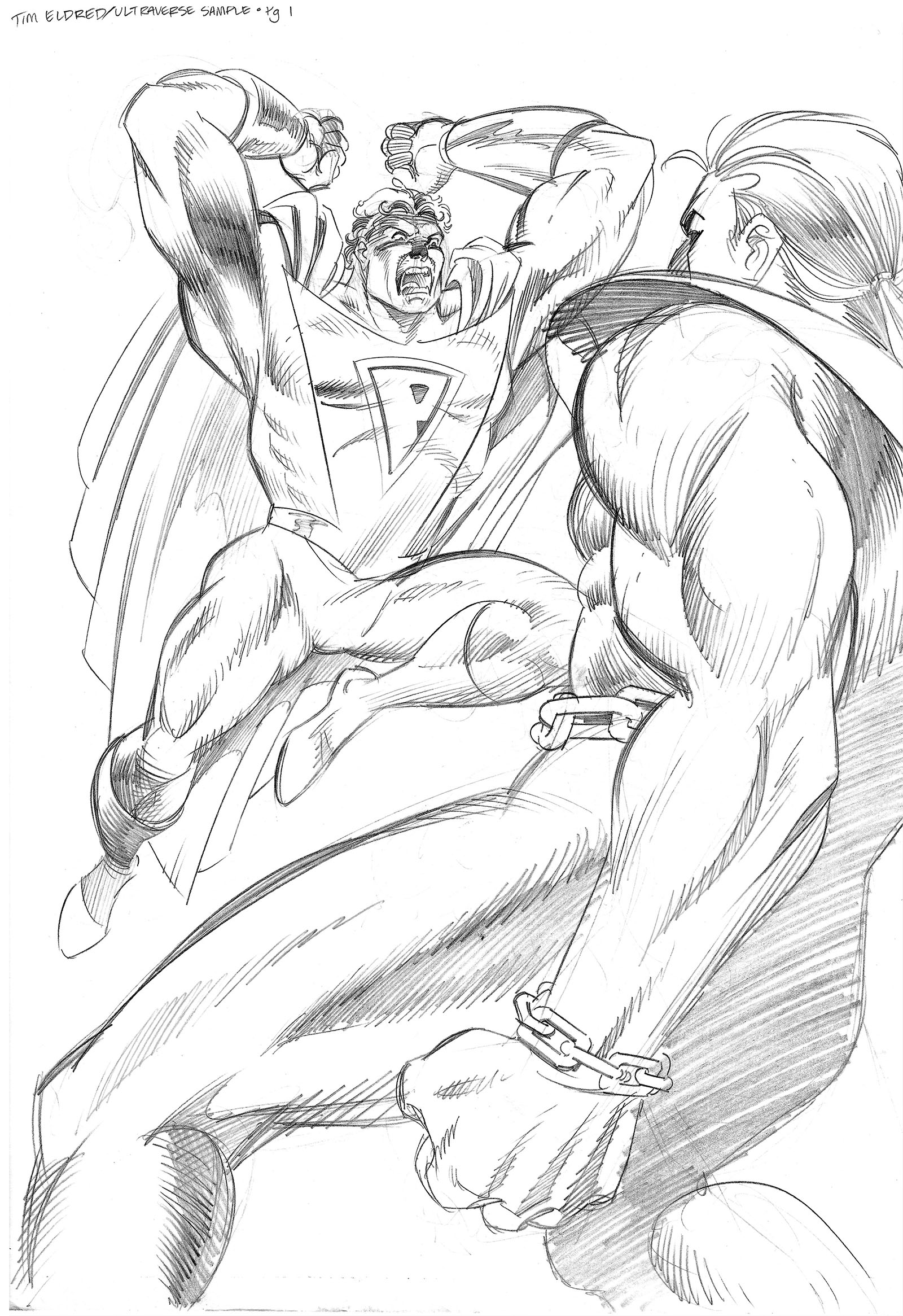 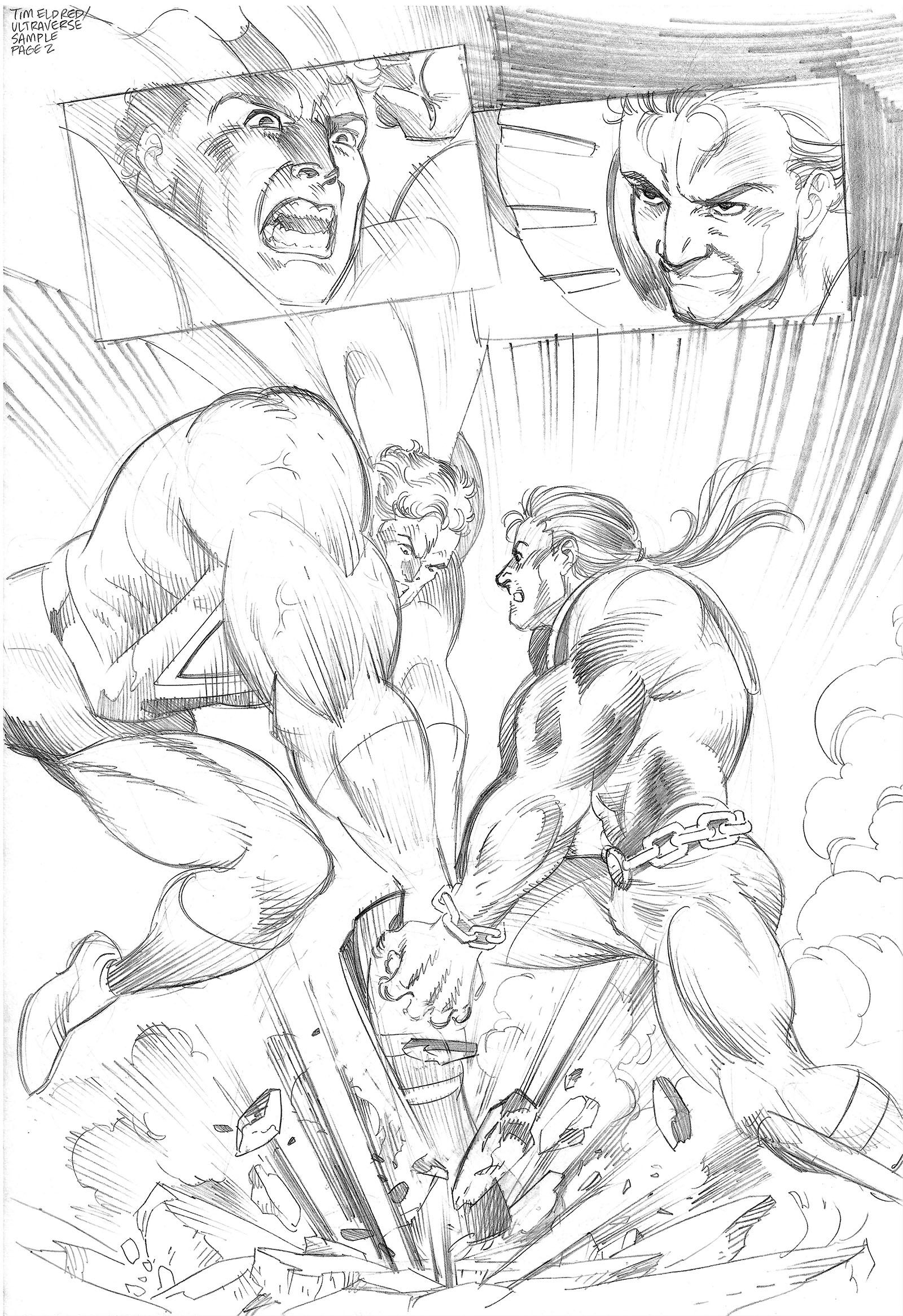 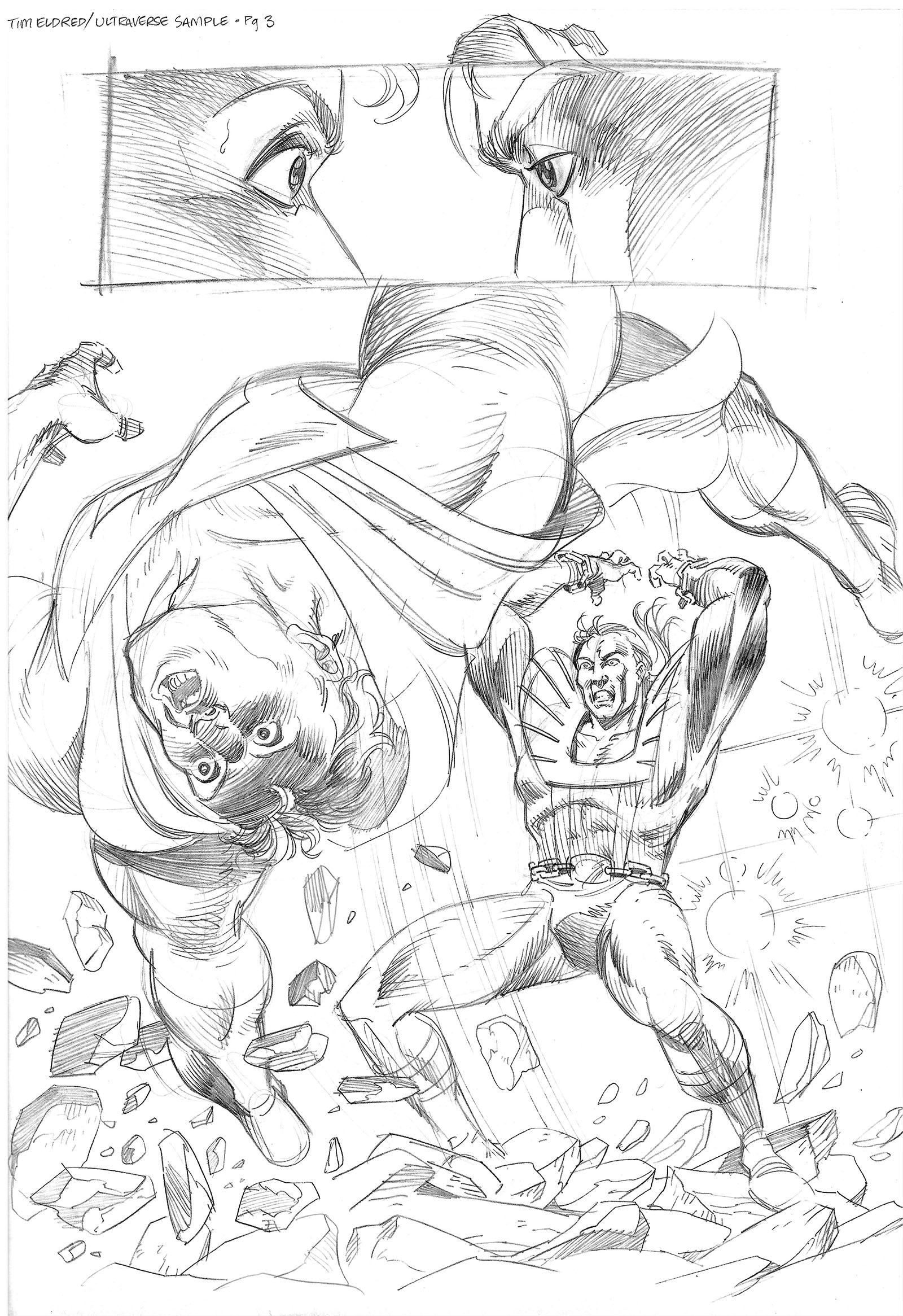 When I turned that one in, Mr. EIC was stumped. He knew he was cornered, and couldn’t argue his way out any more. So, to get me off his back, he gave me a regular inking assignment on an Ultraverse comic instead. It wasn’t what I wanted, but it lasted for a year and paid some bills. But the damage was done between me and Mr. Editor. The lost respect was never earned back. 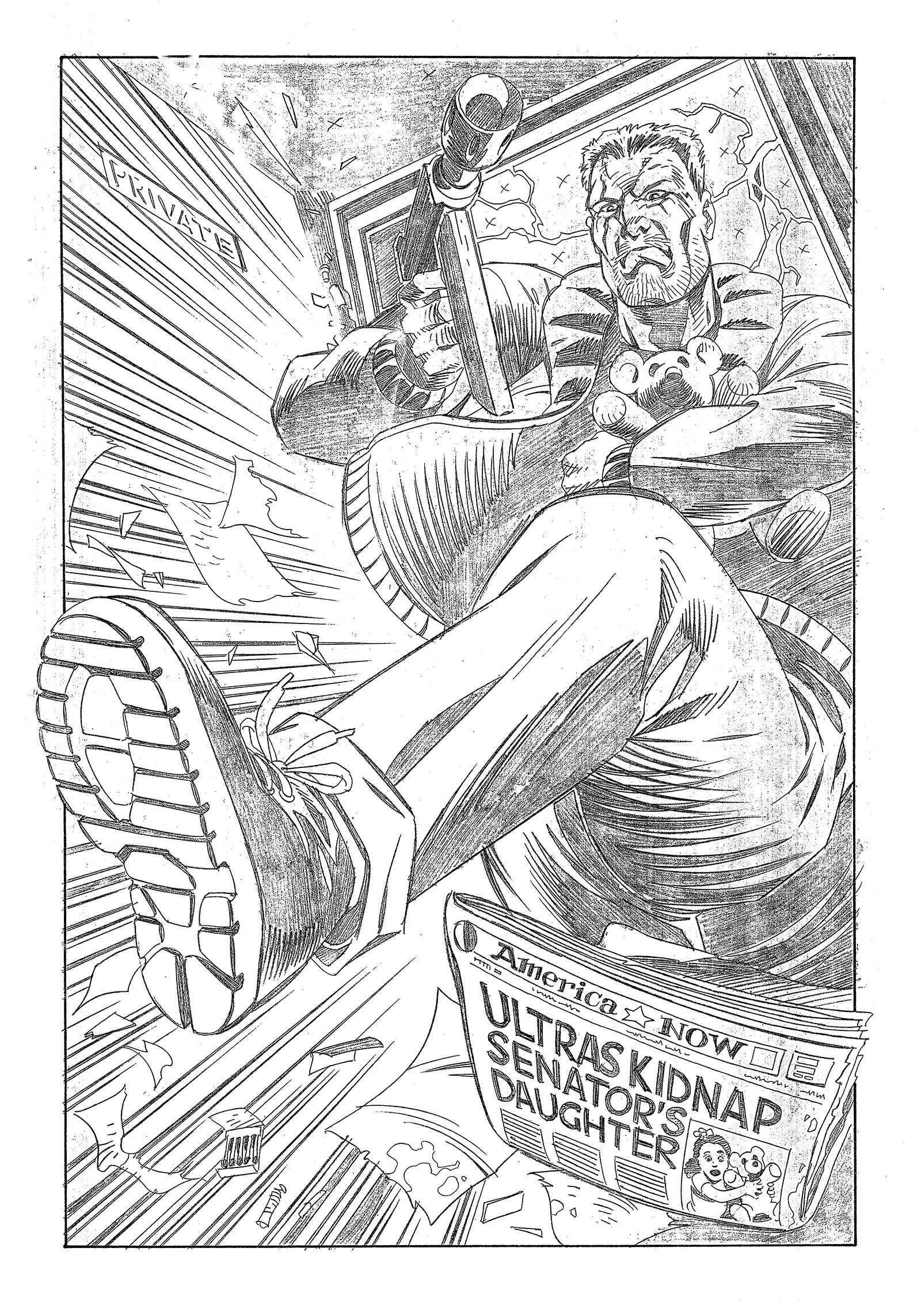 I did one more Ultraverse tryout piece, this time focused on a Punisher-type character named Firearm. It was the single non-super-powered character in the pantheon and I was the regular letterer on the comic, so I did this pinup image to see where it could take me. It turned out to be a good move; the penciler needed help finishing an issue in time, so it landed on my desk. So this one wasn’t quite a dead end. 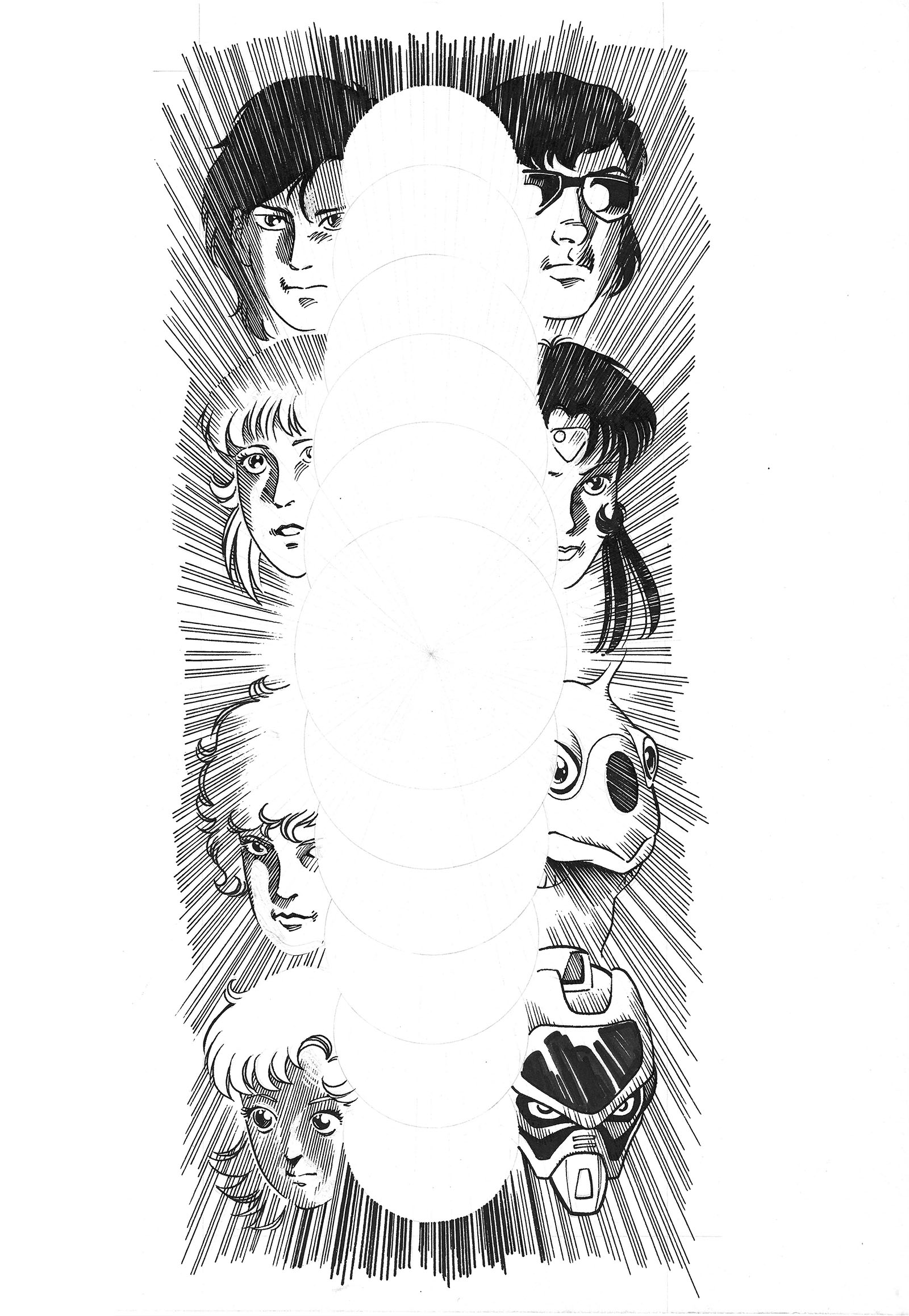 There’s one more dead-end Malibu story for this collection (but still many, many Malibu stories to come). For a little while, I was slated to draw a comic book adaptation of a well-known 1983 anime series Orguss. This came about because Malibu’s Eternity imprint was known for anime adaptations (Lensman, Robotech, Captain Harlock, Project A-ko – all of which I worked on) and a company called U.S. Renditions had started releasing Orguss on VHS.

Since I knew all about the show, I got to participate in development and was first in line to do the adaptation. While the deal was being hammered out, I drew this image for promotion and actually started penciling the first issue. All this was done in anticipation of the project going through. I wanted to be a good soldier and surprise everyone by having the first issue completely ready when the green light went on.

Unfortunately, it never did. Despite all signs pointing to yes and Malibu actually promoting the series at a convention in the fall of ’93, the deal collapsed and the project died. I don’t know if an Orguss comic would have been a success, but I wish we’d at least gotten the chance to find out. 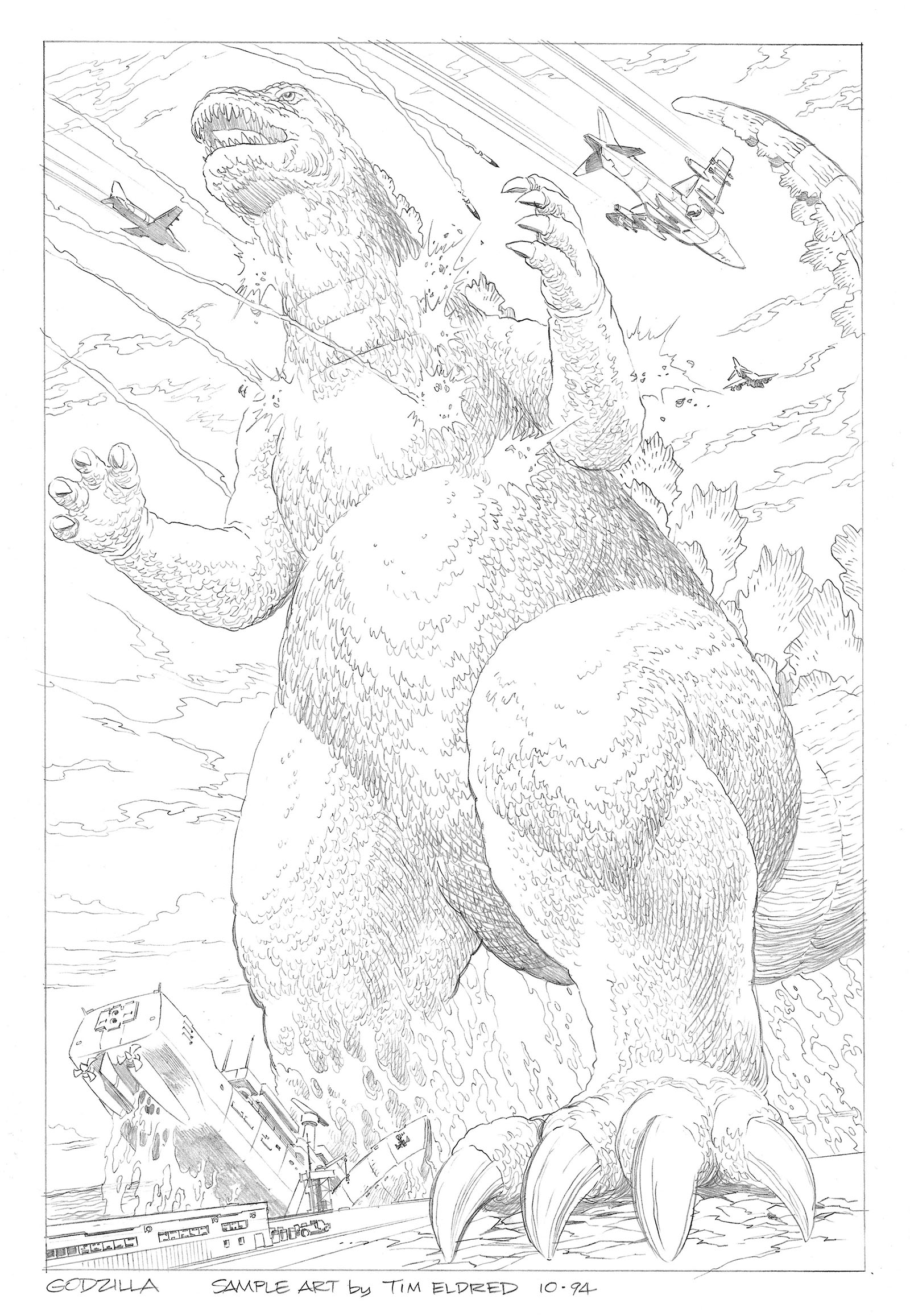 Another piece motivated by my desire to work for Dark Horse. In ’87 they added Godzilla to their lineup of licensed comic book properties, and held onto it all the way through 1998. I’m pretty sure I sent this to them, but I never got to draw a Godzilla comic (except for one I drew as a kid, which I unfortunately gave away). Another publisher, IDW, obtained the rights in 2010, but by that time I wasn’t looking for comic work any more. 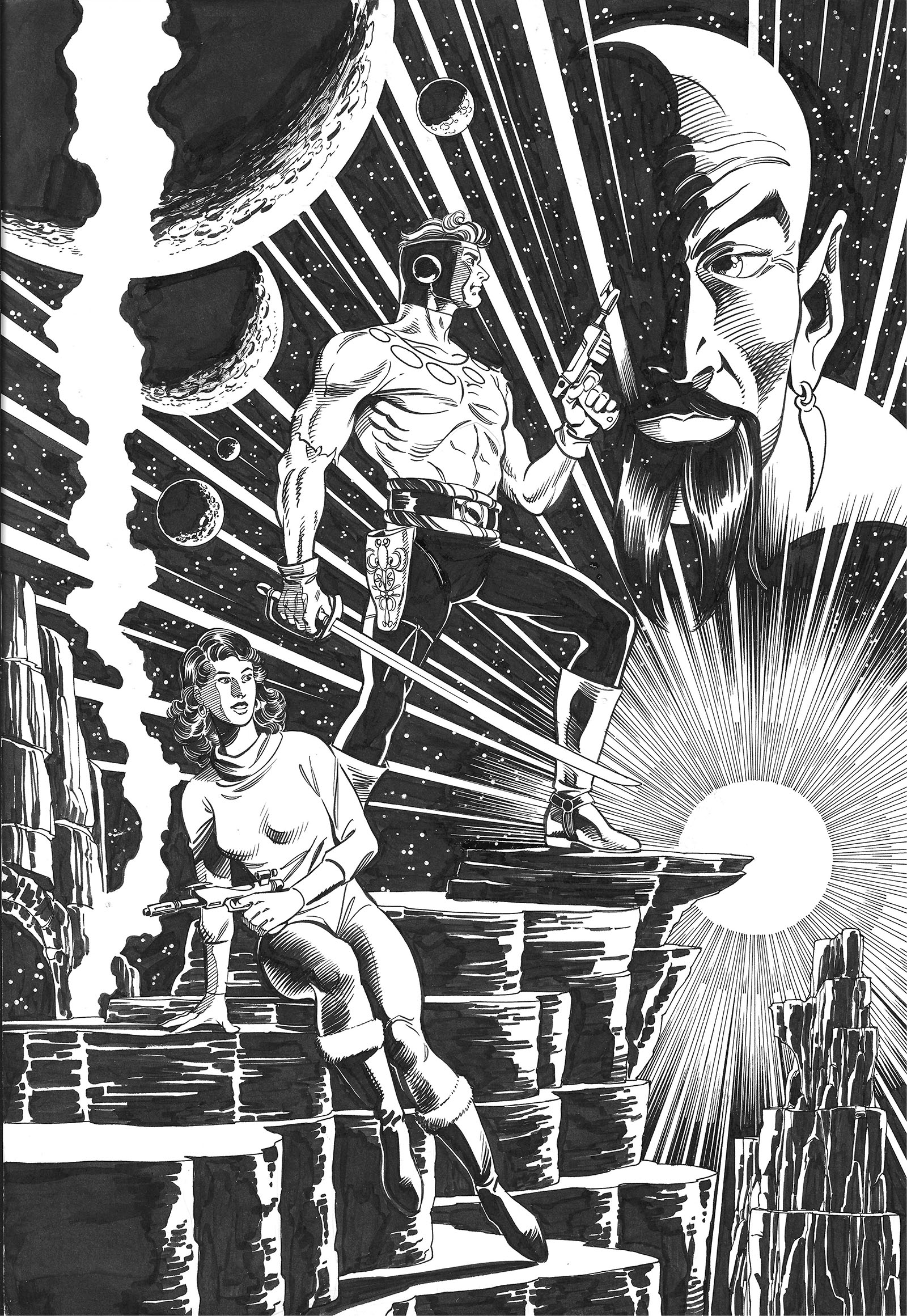 This was a portfolio piece I did after leaving Malibu. I wanted to demonstrate how far my drawing skills had come, and the “King of the Impossible” seemed like a good subject. 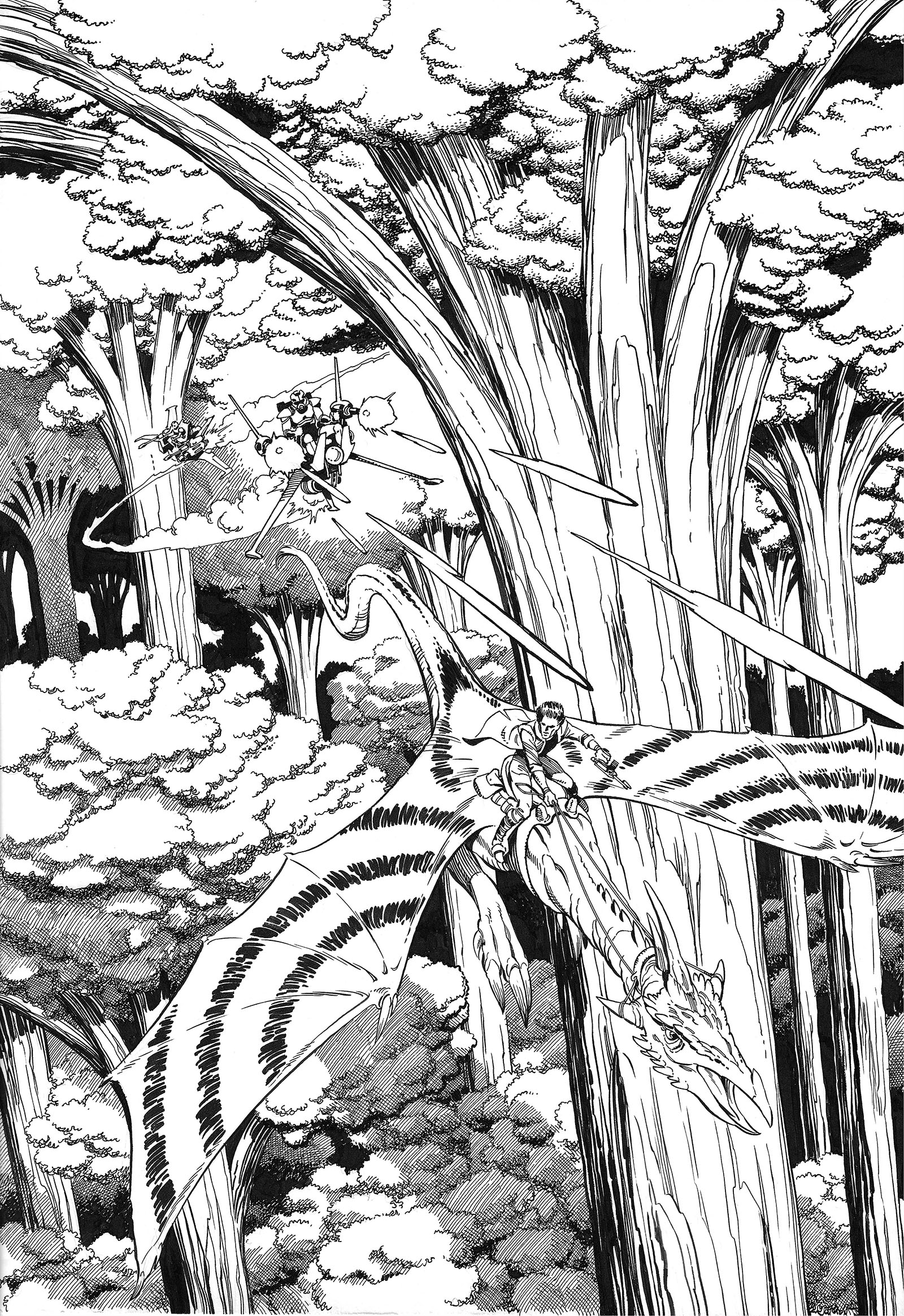 An original fantasy illustration from the same time period. Again, something for the portfolio. In particular, I wanted to create a piece that would emphasize my inking style. Anyone who got a portfolio from me in subsequent years saw these two pieces. I have no way of knowing if they specifically got me work, but they were definitely worth doing. 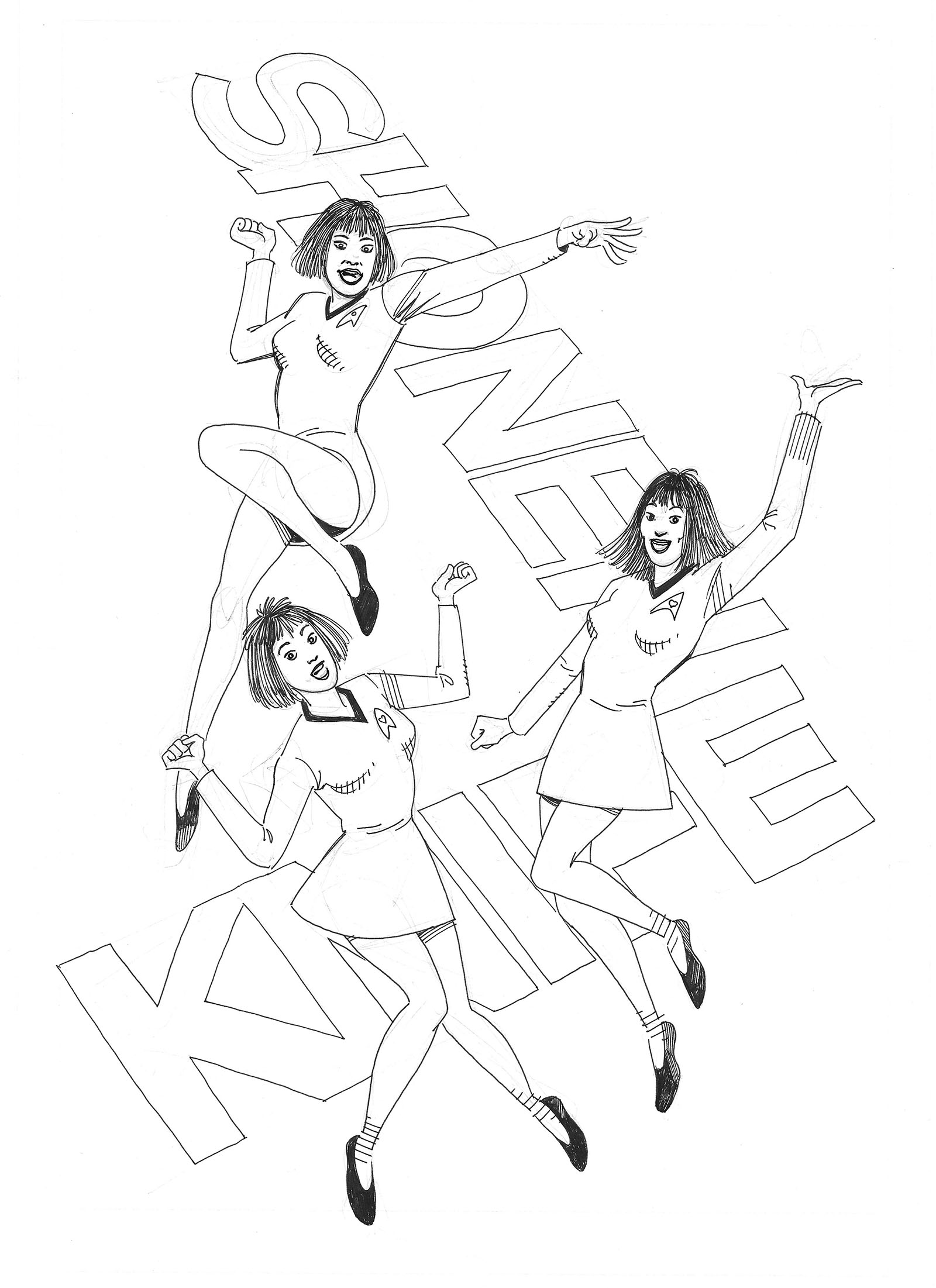 Here’s a weird one for you. In ’94 I teamed up with two other artists to form our own mini-company called Studio Go! We did anime-based comics for two different publishers and offered our services to whoever else we thought could use them. Wanna turn your IP into a comic book? Just hire Studio Go! We lasted until the comic book distributor crash of ’96, which caused a severe industry contraction and tossed me into the TV cartoon biz. (Again, lots of stories to come.)

At one point, we thought about approaching the popular J-Pop band Shonen Knife about creating an American comic for them, so I did a Shonen Knife pinup for something to show. But we never made contact, sooooo…plop. 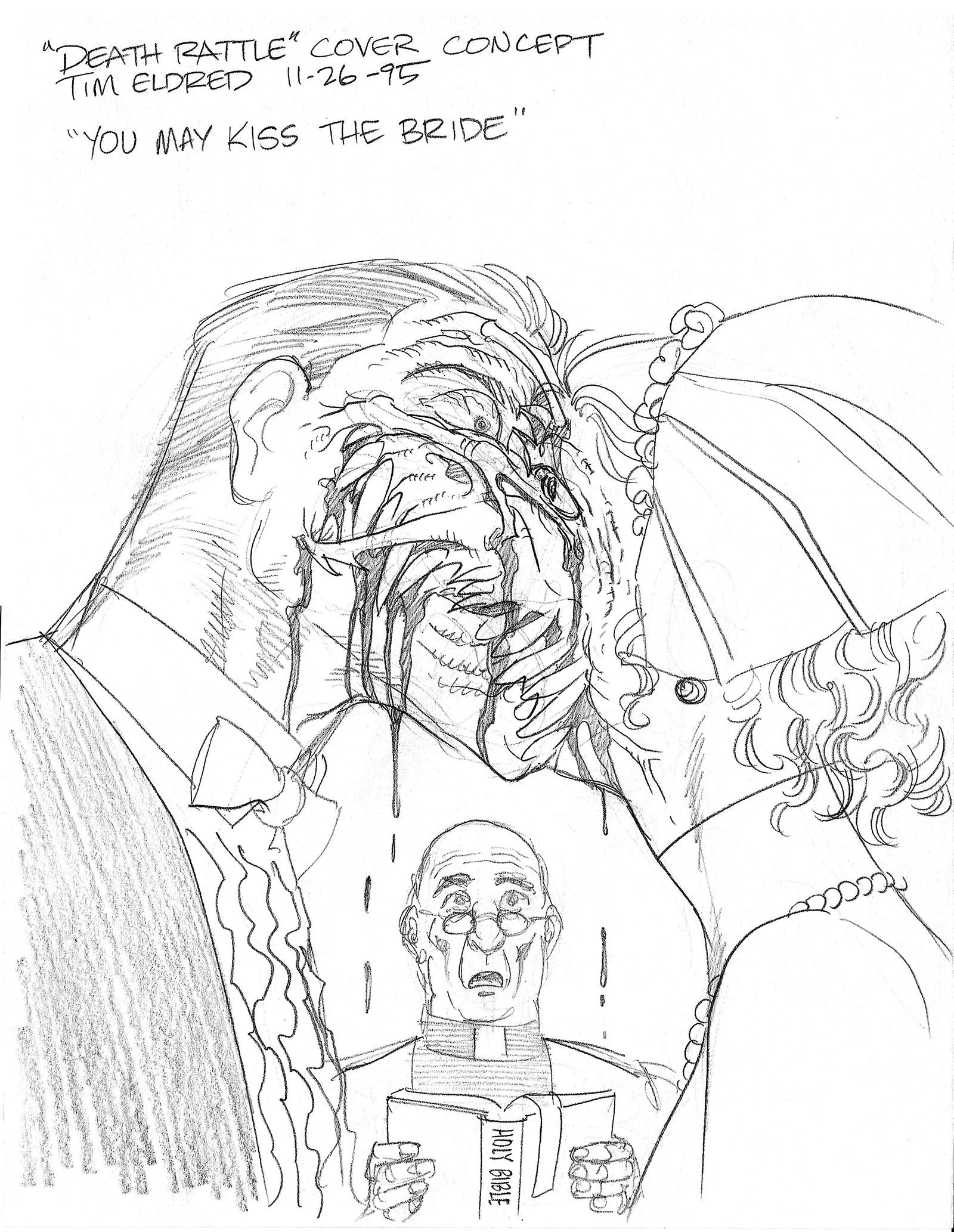 In 1994, I made contact with a respected comics publisher called Kitchen Sink Press, and managed to get a deal for them to reprint/upgrade my 1992 comic Grease Monkey. While that was underway, I got to contribute a short story to their EC-style horror anthology, Death Rattle. One day I got an idea for a cover. I submitted it for consideration, but nothing came of it.

I’d like to go on record as saying that I’ve been married twice, but this image does not reflect my views on either of them. 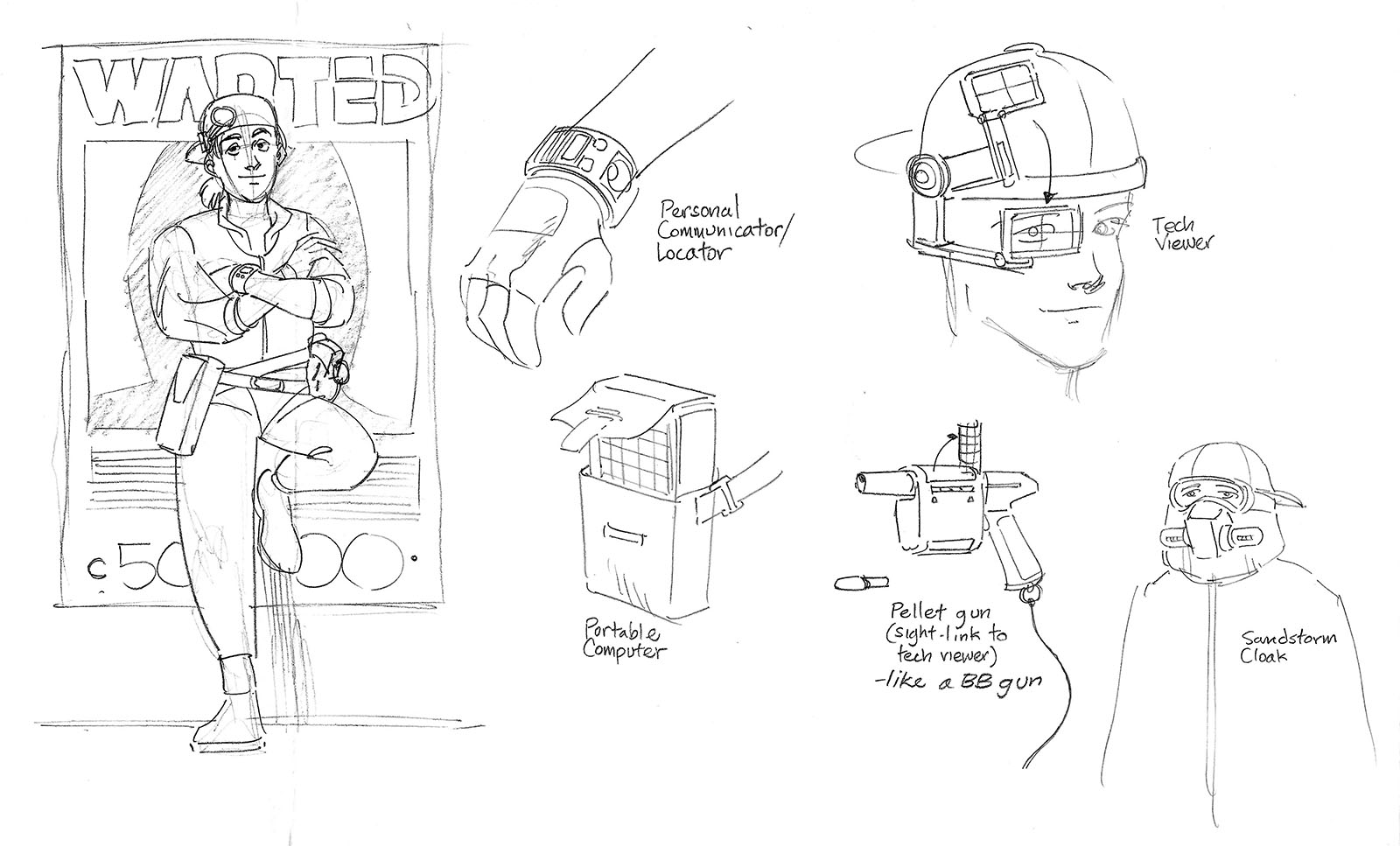 Thanks to my association with Kitchen Sink, I finally got to brush up against the TV animation business in 1995 when their Hollywood agent arranged for Grease Monkey to be pitched as a cartoon. You can find out how that went in the various articles at the Grease Monkey website. Ultimately, it created the opening for me to become a storyboard artist (on Wing Commander Academy) and opened the door to a whole new career. Prior to that, it was pitched at a few different studios including Henson (yes, THAT Henson). 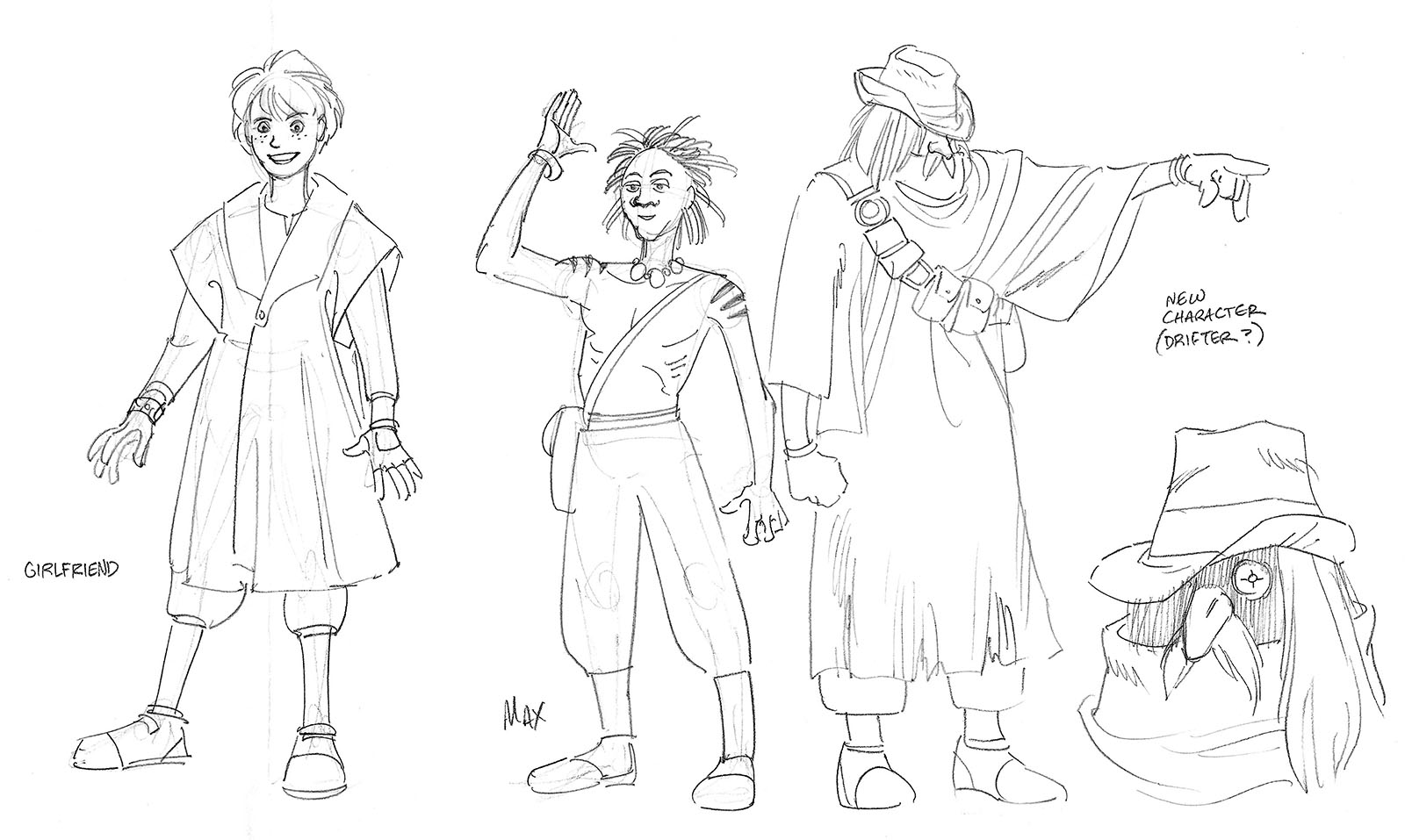 They didn’t say yes to Grease Monkey, but the art in the pitch made someone think I might be a good fit for another show they were developing called Convoy Kid (by a writer named Lane Reichert). It was sort of a “Young Luke Skywalker” concept with a kid racing hot rods on a desert planet (reminder, The Phantom Menace was still three years in the future). I came up with a few sketches (shown here) and turned them in, after which I was told they were taking the show in another direction. I would later learn that this was showbiz code for “probably not going to happen.” And that is indeed the way it went. 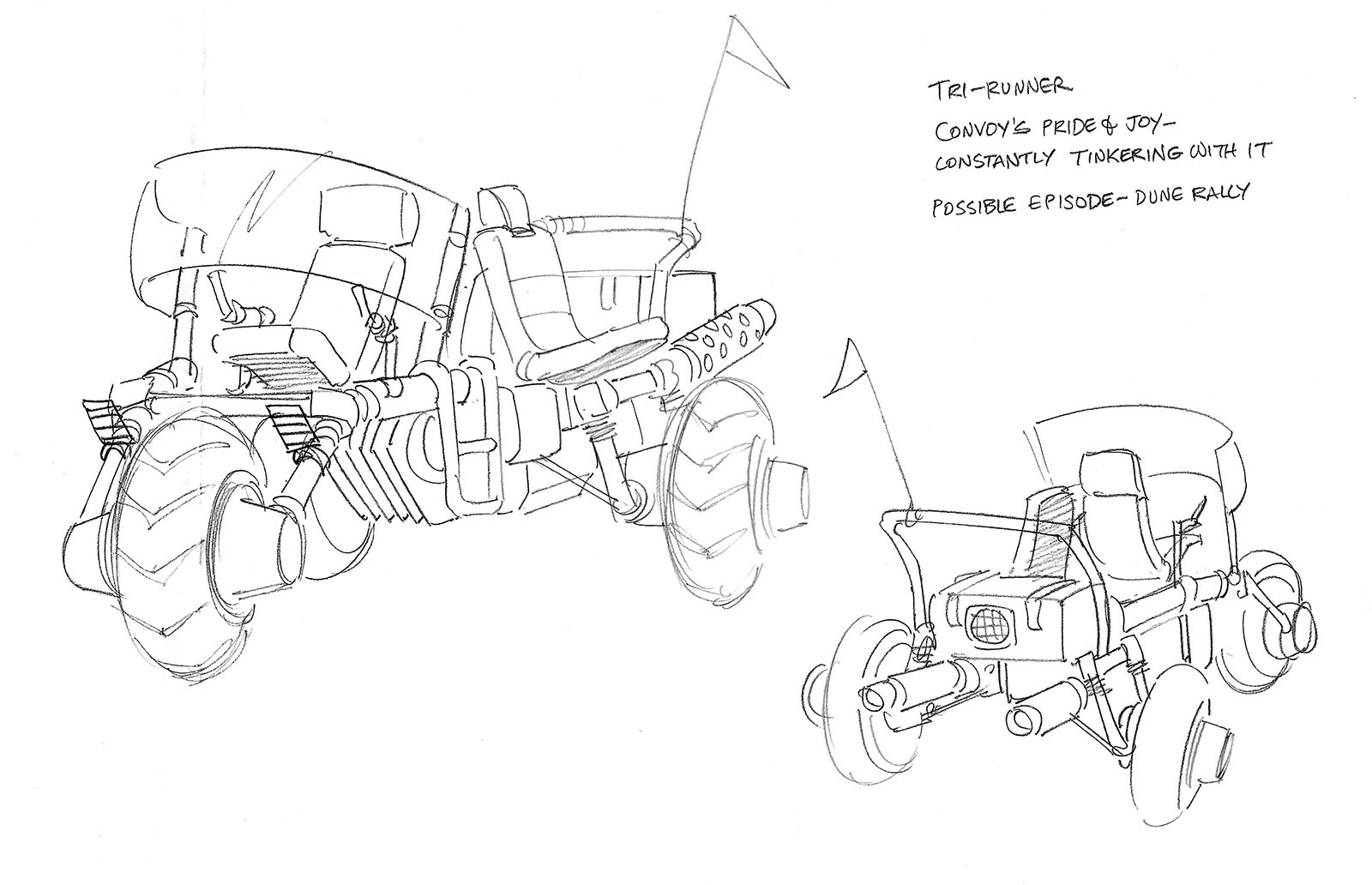 But I did get to visit the Henson Studio, and as a thank-you for my effort I was invited (with my wife and 5-year old daughter) to watch a couple of famous muppet guys record a Gonzo & Rizzo segment for a TV special. Which was reward aplenty. 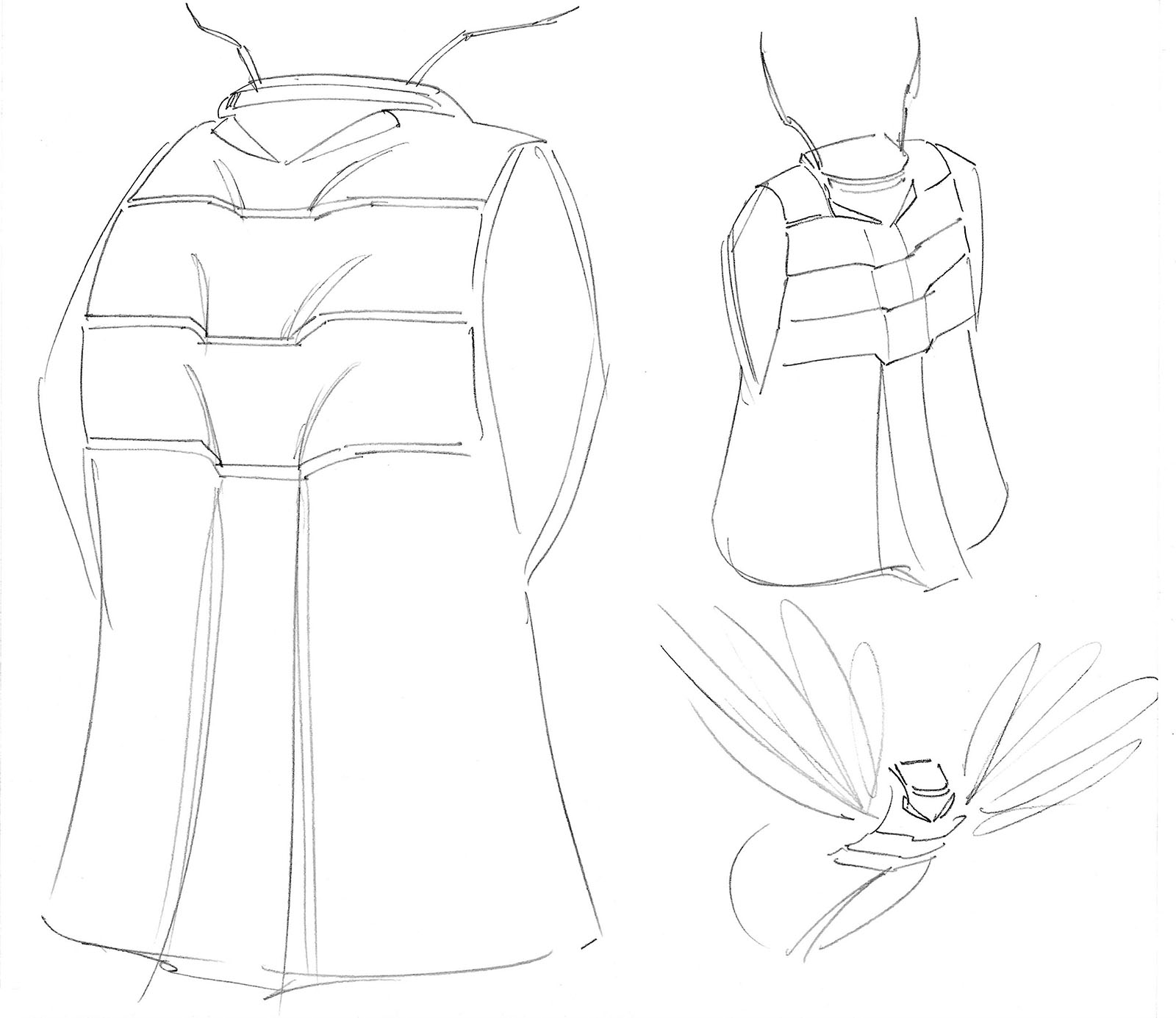 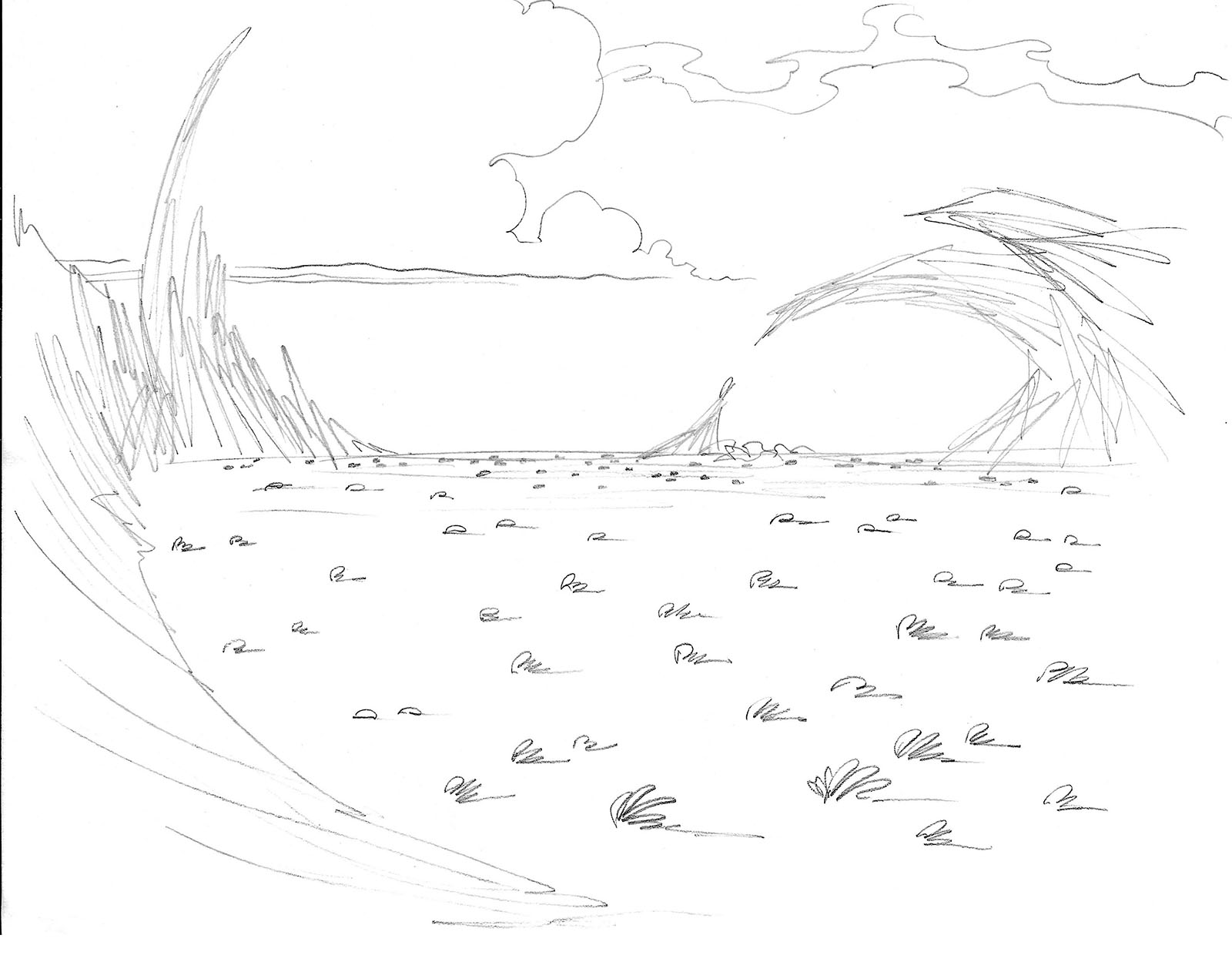 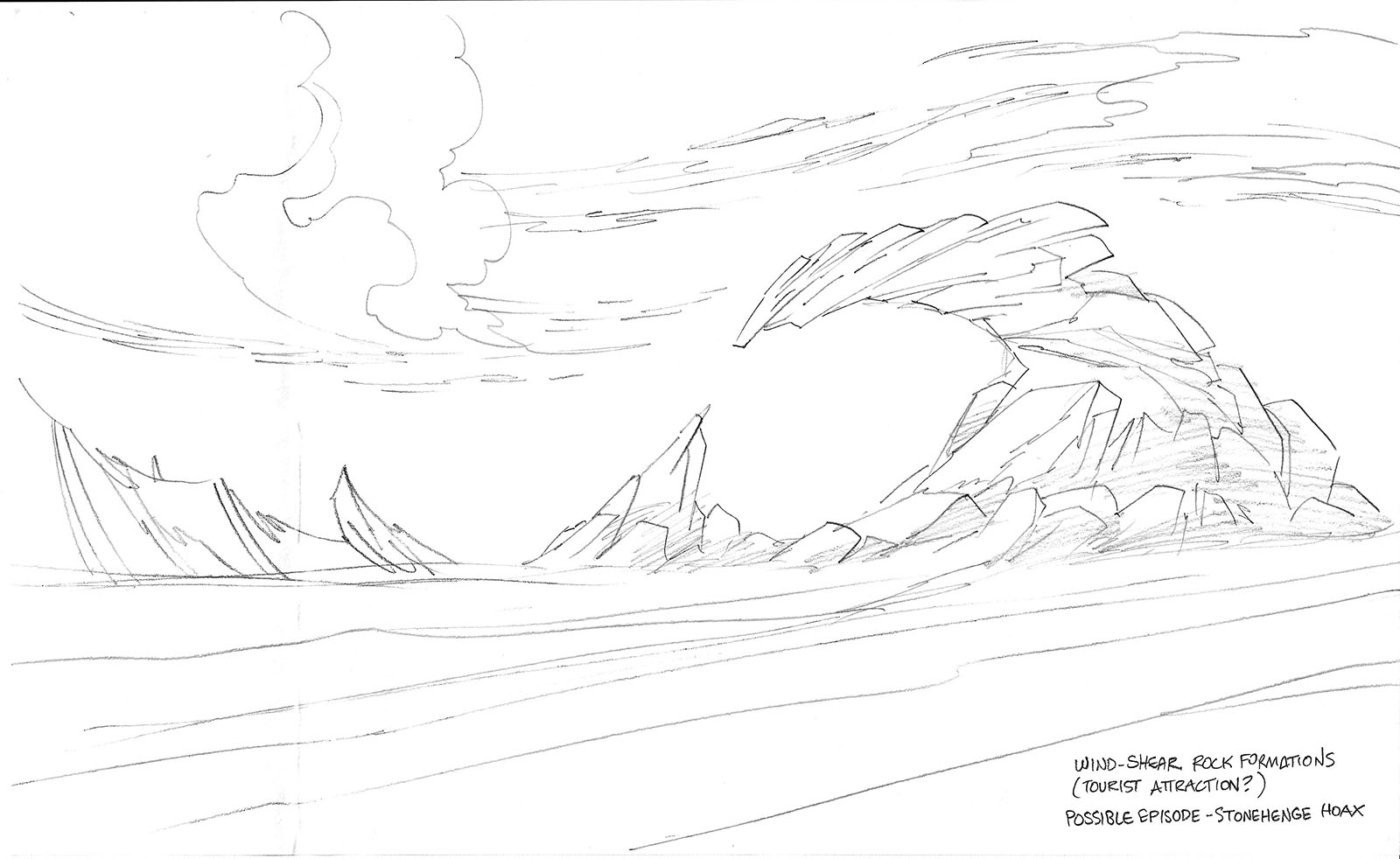