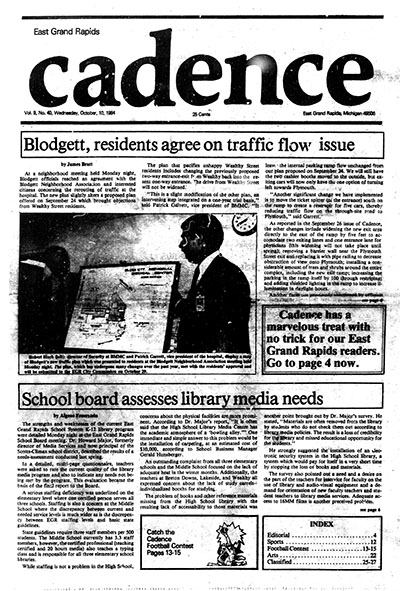 During my first year out of high school, I had amassed enough graphic arts skills to enter the job market right away and skip all that expensive college business. I may have entered at the bottom as a minimum-wage slave working second shift, but an income was way better than a tuition.

The jobs I qualified for were very modest, creating ads for phone books back when phone books were a thing. We’d crank them out by the truckload and never see them again or even know if they made it into print. There wasn’t much esprit de corps or opportunity to make friends. This was the McDonalds of the graphic arts world, and turnover was high. I worked for two different “yellow page” ad companies in downtown Grand Rapids, Michigan for a few months apiece and then found a way out.

There was a weekly newspaper in the more upscale East Grand Rapids called Cadence (run entirely by women, quite progressive for the time) that needed to replace an artist in their composing department. “Composing” in this case had nothing to do with music, it was just what they called the paddock where a trio of graphic arts workhorses put all the ads and news pages together. (I never thought then that I’d need a photo of it for posterity, so here I am empty-handed.)

We’d assemble a 20-30 page tabloid size newspaper every seven days like clockwork. We finished and delivered the paper to the printer on Tuesday nights, and copies found their way to East Grand Rapids shops and homes the next day. The printer returned the original paste-ups (also called “flats” or “mechanicals” by some) and we’d cannibalize them for the next edition.

The text galleys were typed on early word processors, but assembly was 100% analog; paper, photostats, wax (as a substitute for glue), and border tape. It was basically a craft project that required all hands on deck one day a week. Desktop publishing as we know it today wasn’t even a dream yet. 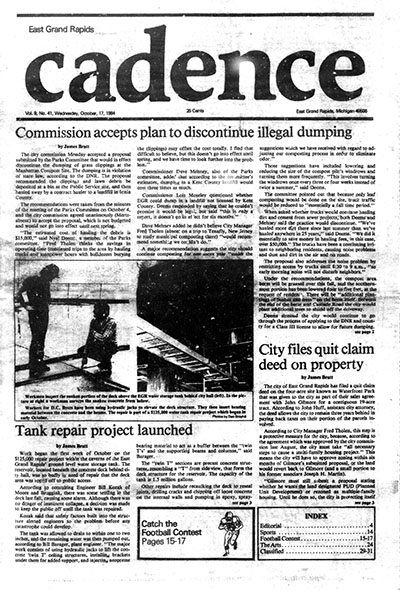 It was a good fit, I liked everyone I worked with, and I got a lot of valuable experience from it, so I stuck around for a couple years (during which time there were only two other male employees, a reporter and a photographer). It was the dawn of computerized phototypesetting, and we were just behind the leading edge. Our computers were the size of furniture. It was really nice to have unrestricted access to high-end graphic arts equipment that I could apply to my own personal projects during downtime, and I definitely made the most of that perk.

Cadence Composing was also a full-service graphic arts agency on the side. We’d take in all sorts of jobs from resumes to business cards to brochures. I got to design the program books for Opera Grand Rapids two years in a row, which was nothing short of full-on book production (and the comp tickets were a nice bonus). I even got my first experience as a prospective employer when the next artist had to be hired and I conducted job interviews. I was just 20 at the time, gate-checking people older than me.

More to the point, this was the first job that allowed me to wield my cartooning skills for a paycheck. The editor in chief had always wanted an editorial cartoonist who she could dictate an idea to, and I was ready to serve. Another of my duties was to generate “filler” material for the paper. That’s what you need when you haven’t sold quite enough ads to fill up every column inch, or the article text comes up a little short. If there’s a blank spot somewhere, it’s very helpful to have fillers of various sizes ready to plug in.

Thus I became Cadence newspaper’s own version of Sergio Aragones, whipping up little jokes and cartoons for the margins. No reader ever commented and I don’t know if they were actually noticed, but hopefully they brightened what could otherwise be a pretty standard routine of high school sports, local tempests, and that week’s grocery bargains.

I kept the original art for all those fillers, and now I can plug them in here as a 1984 TimE capsule. They were drawn with Rapidograph pens on vellum, then shot onto photostats. In some cases, they came right off a paste-up after printing. 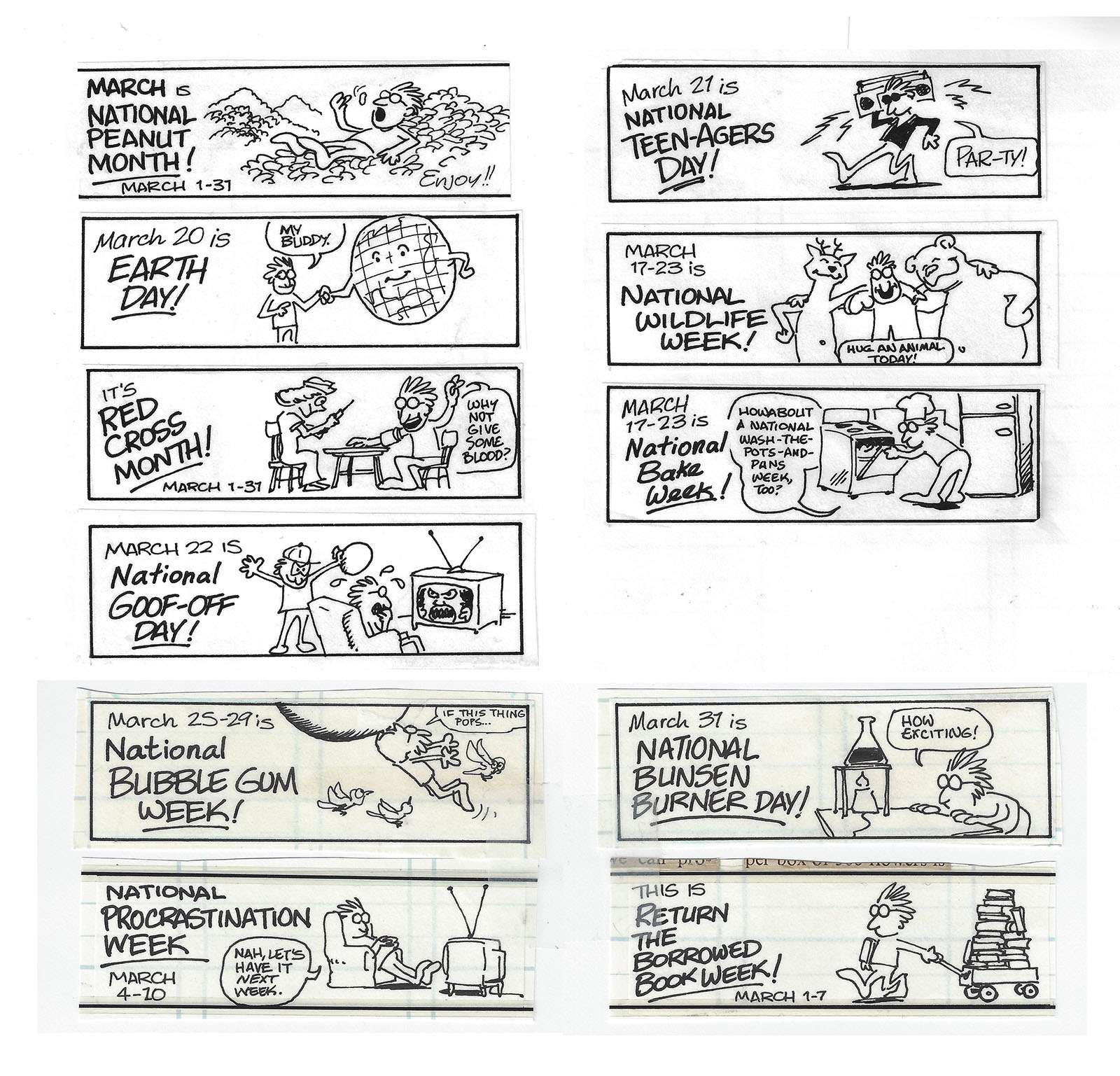 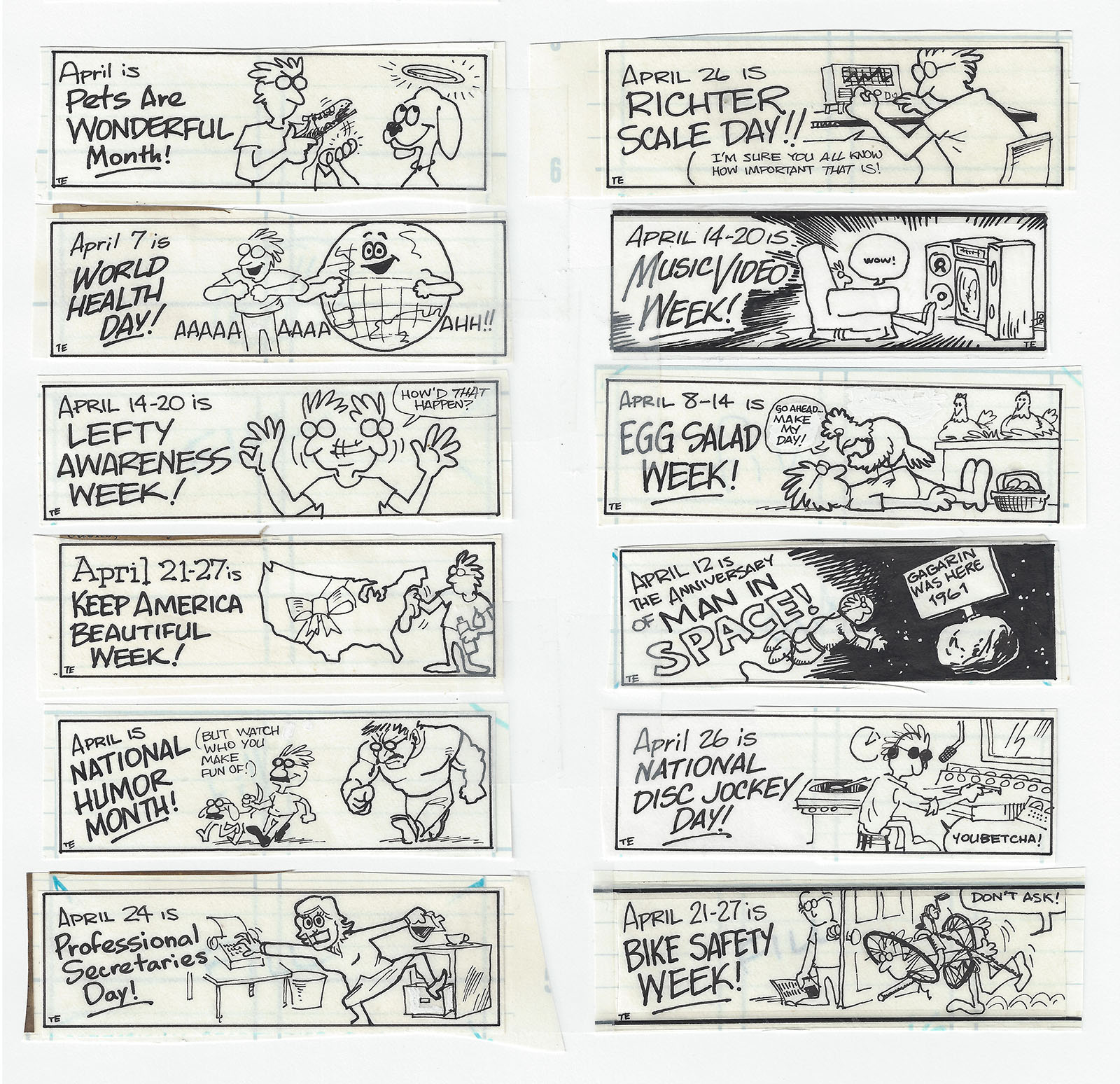 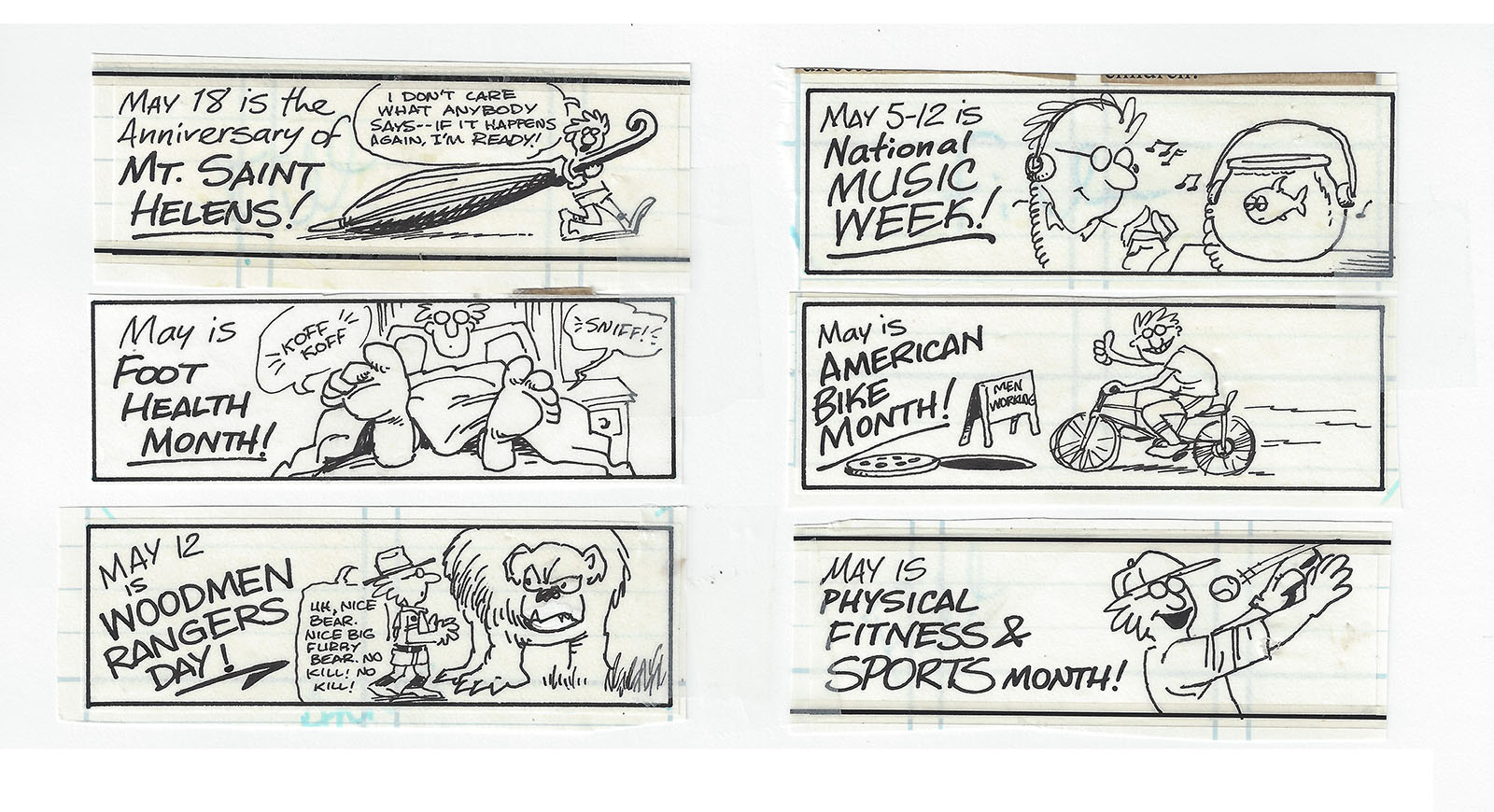 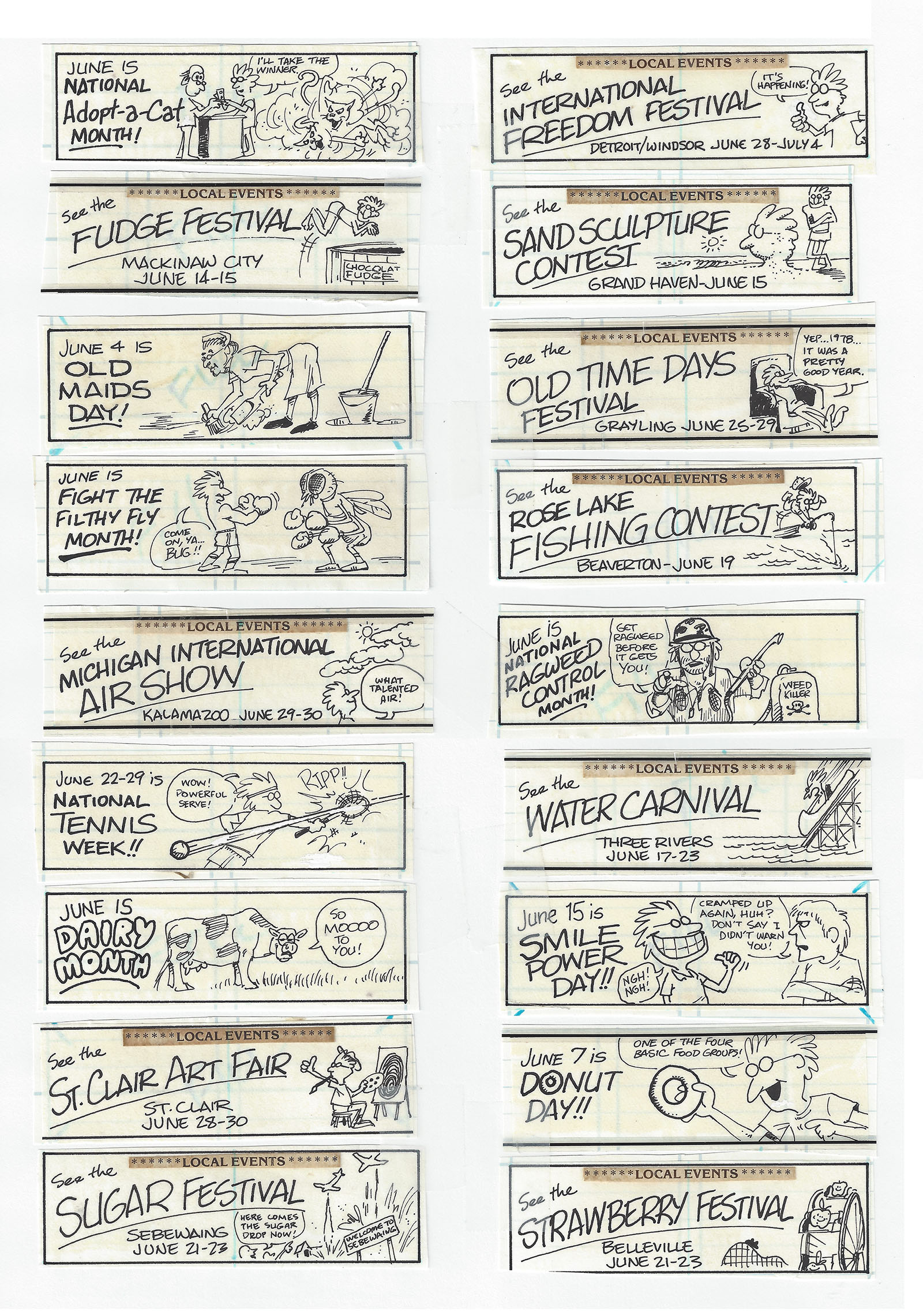 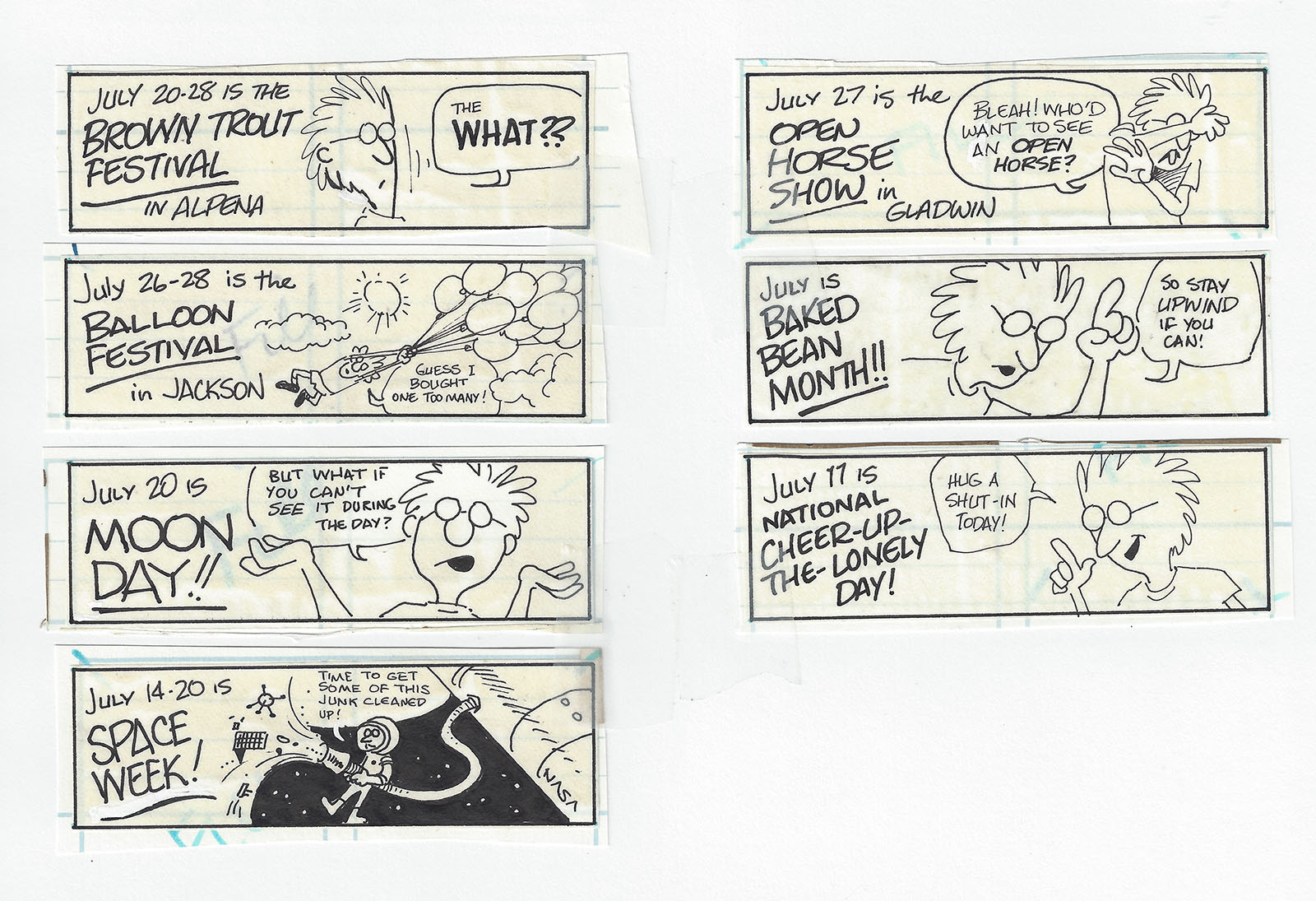 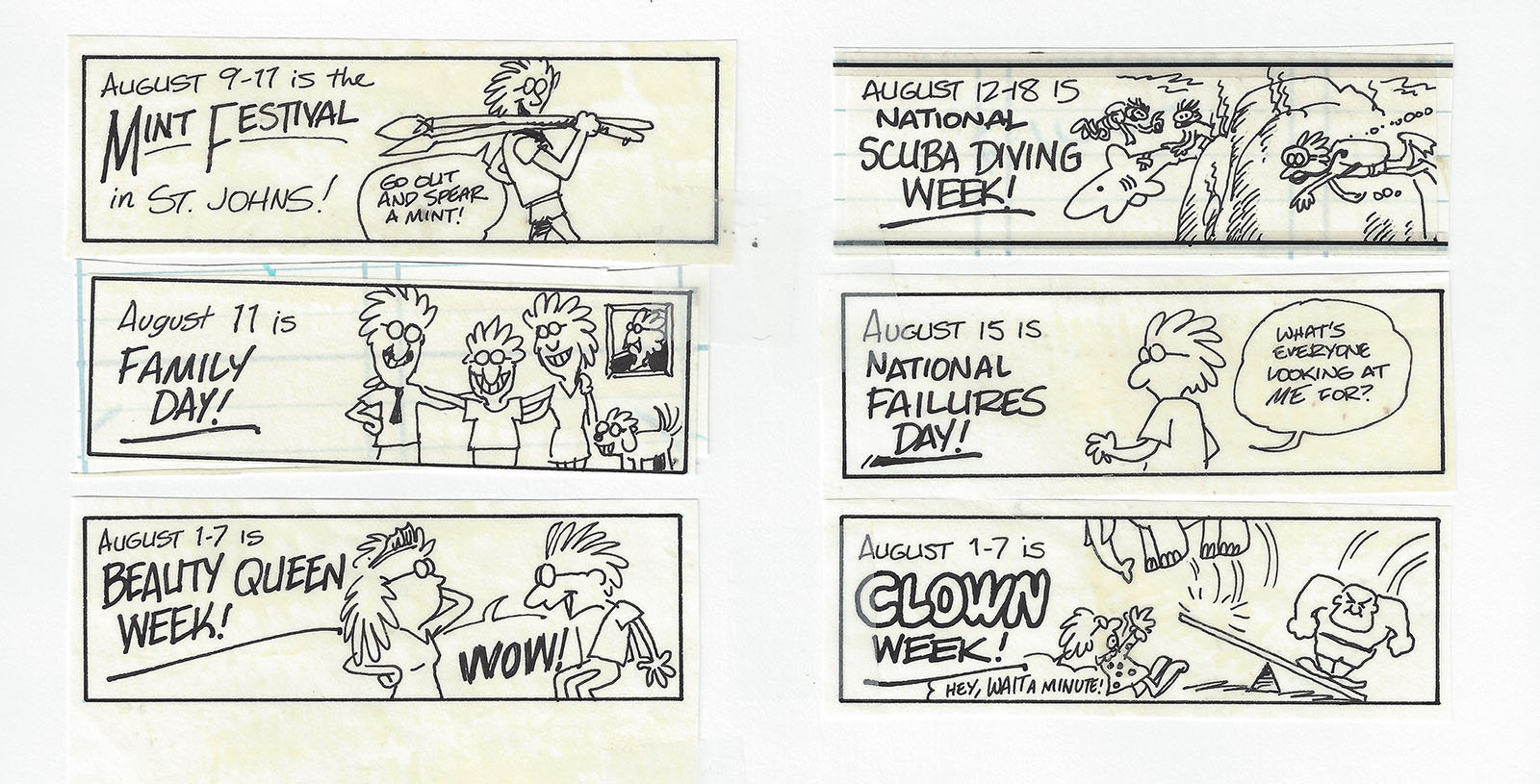 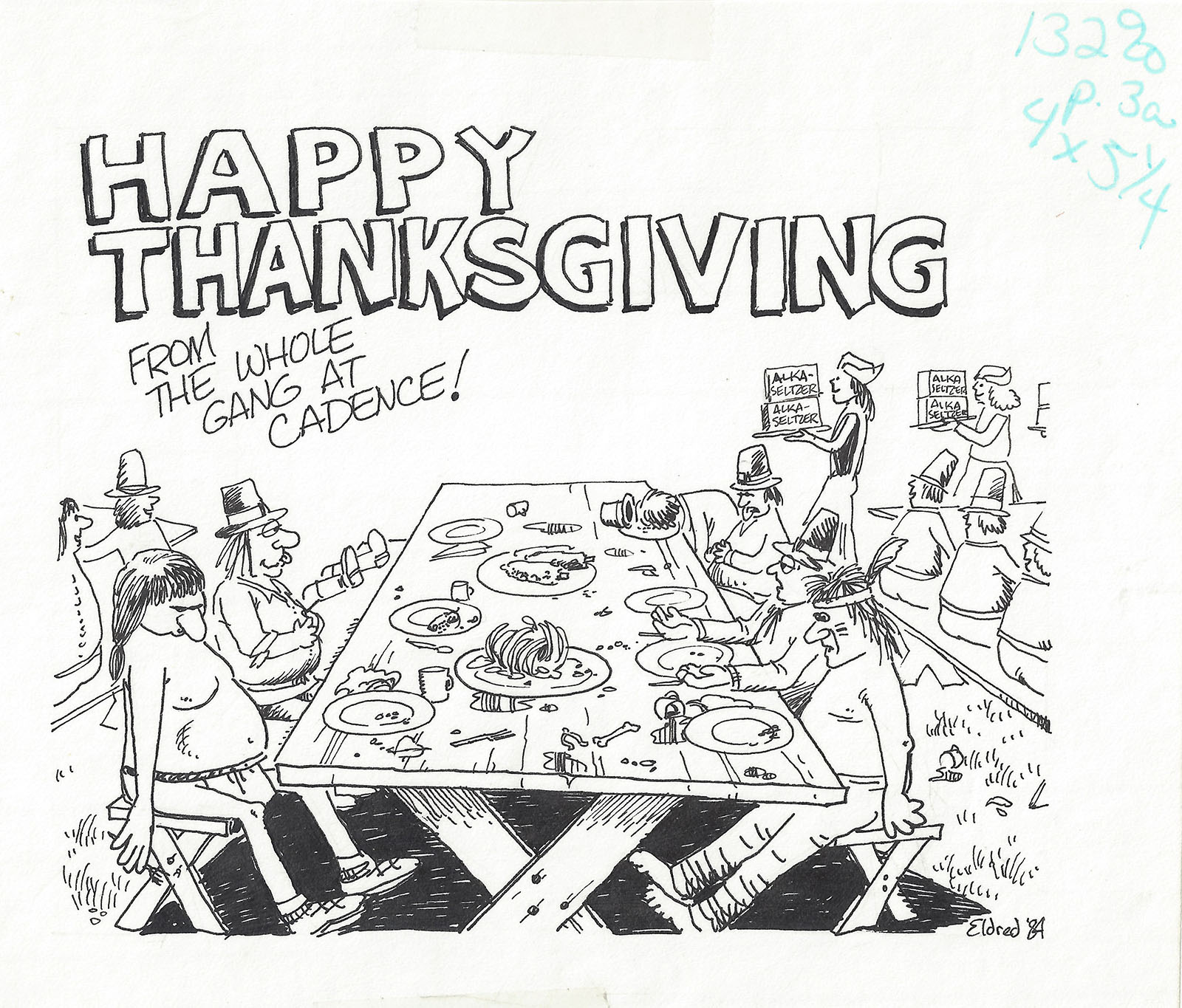 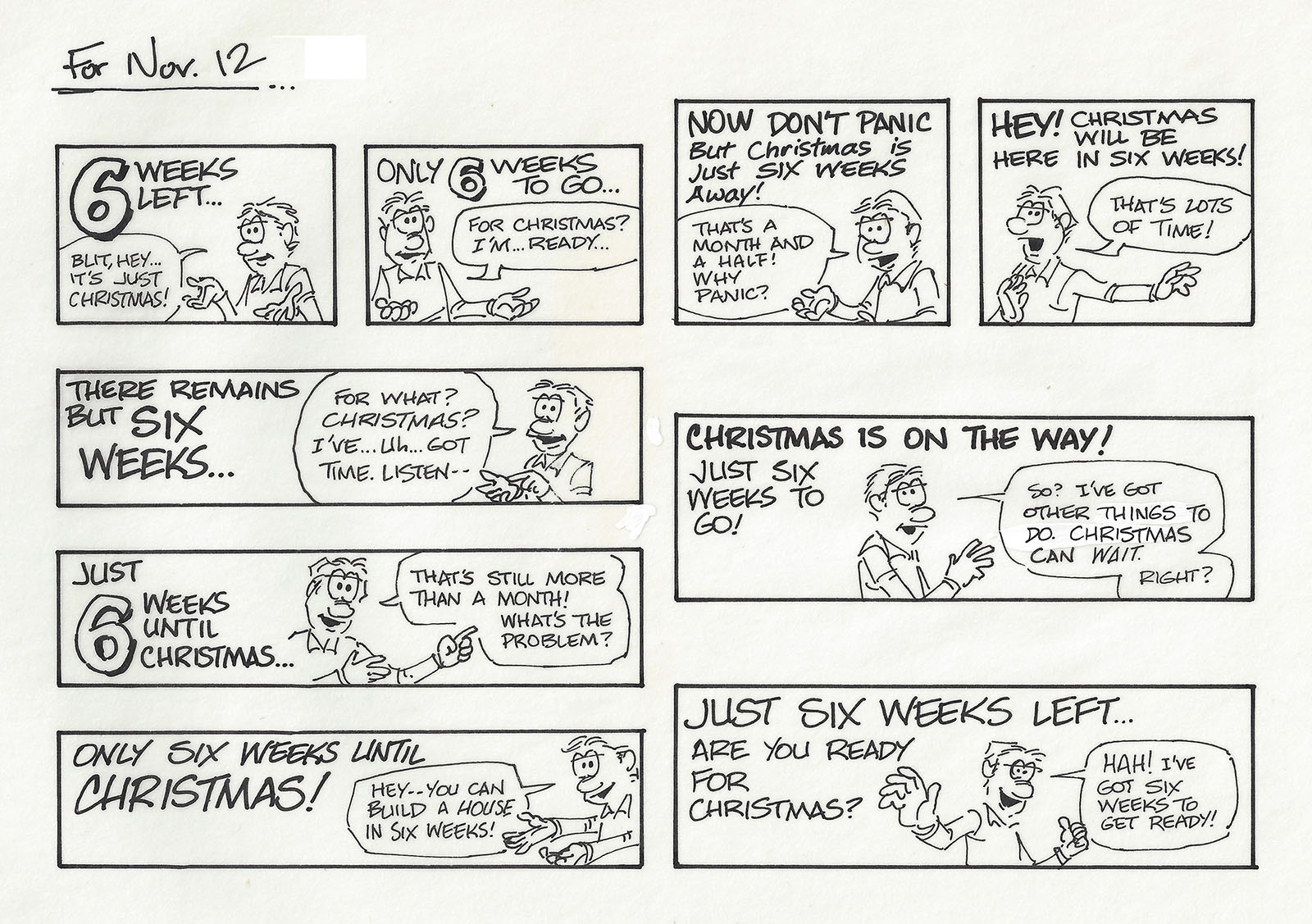 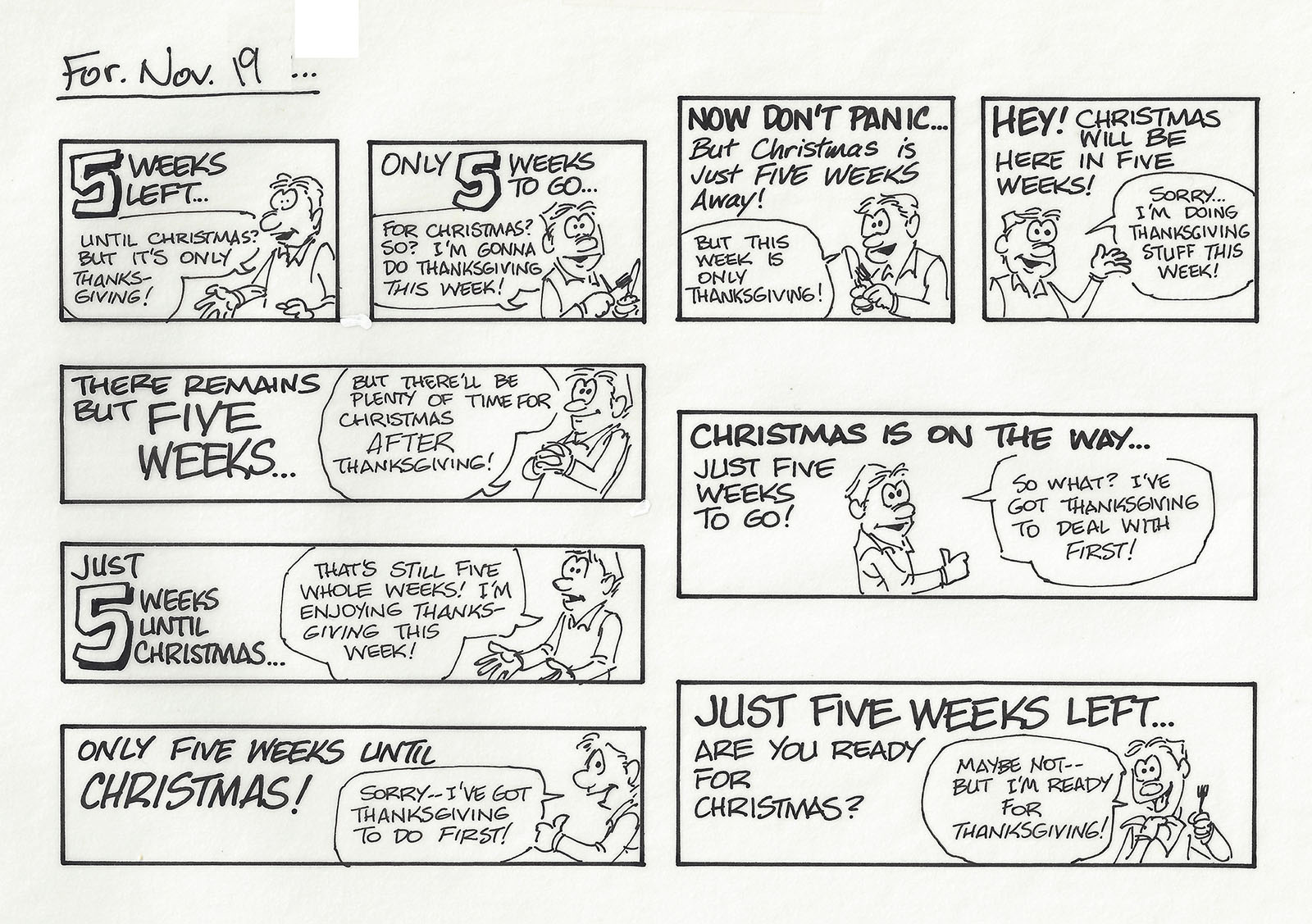 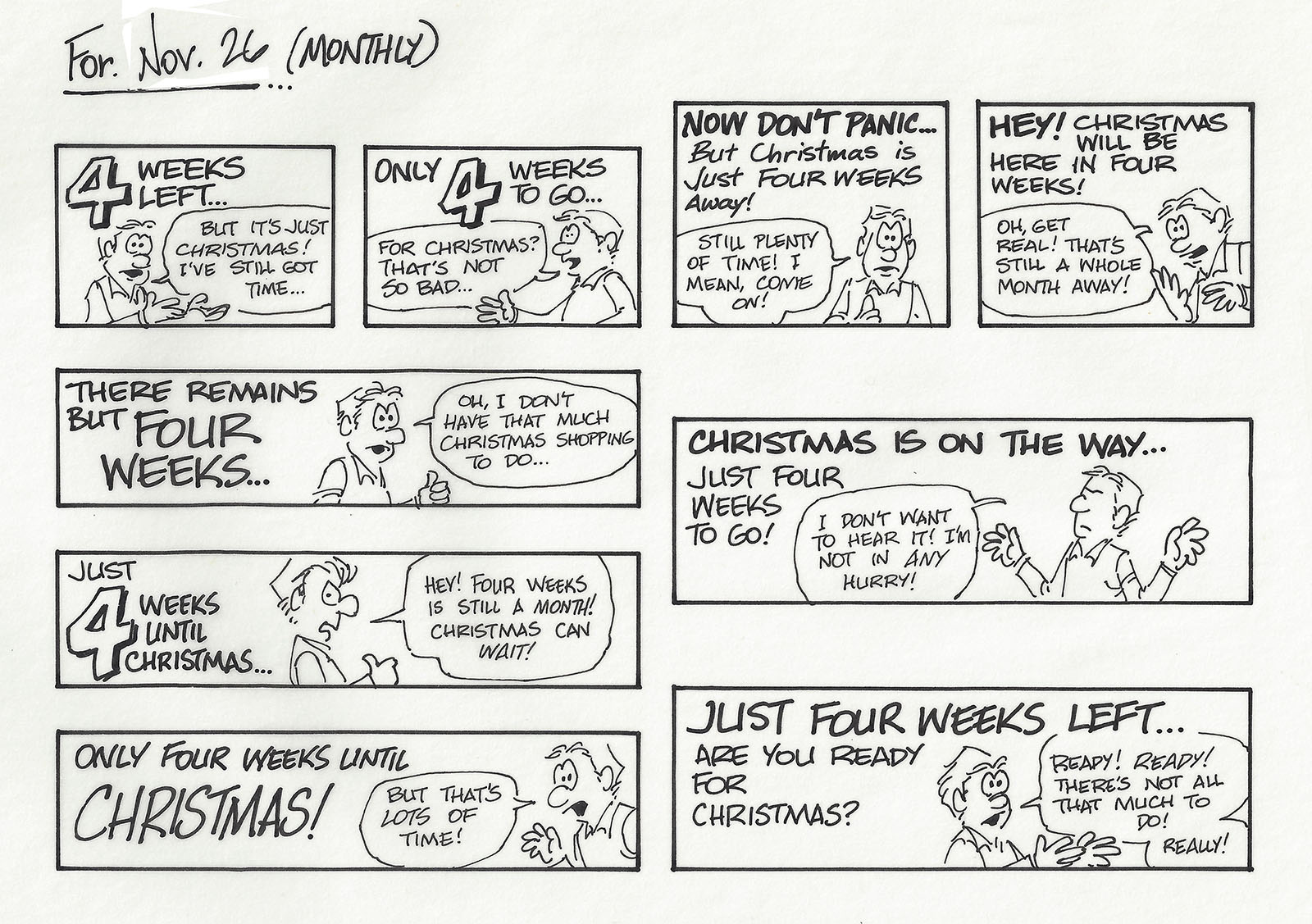 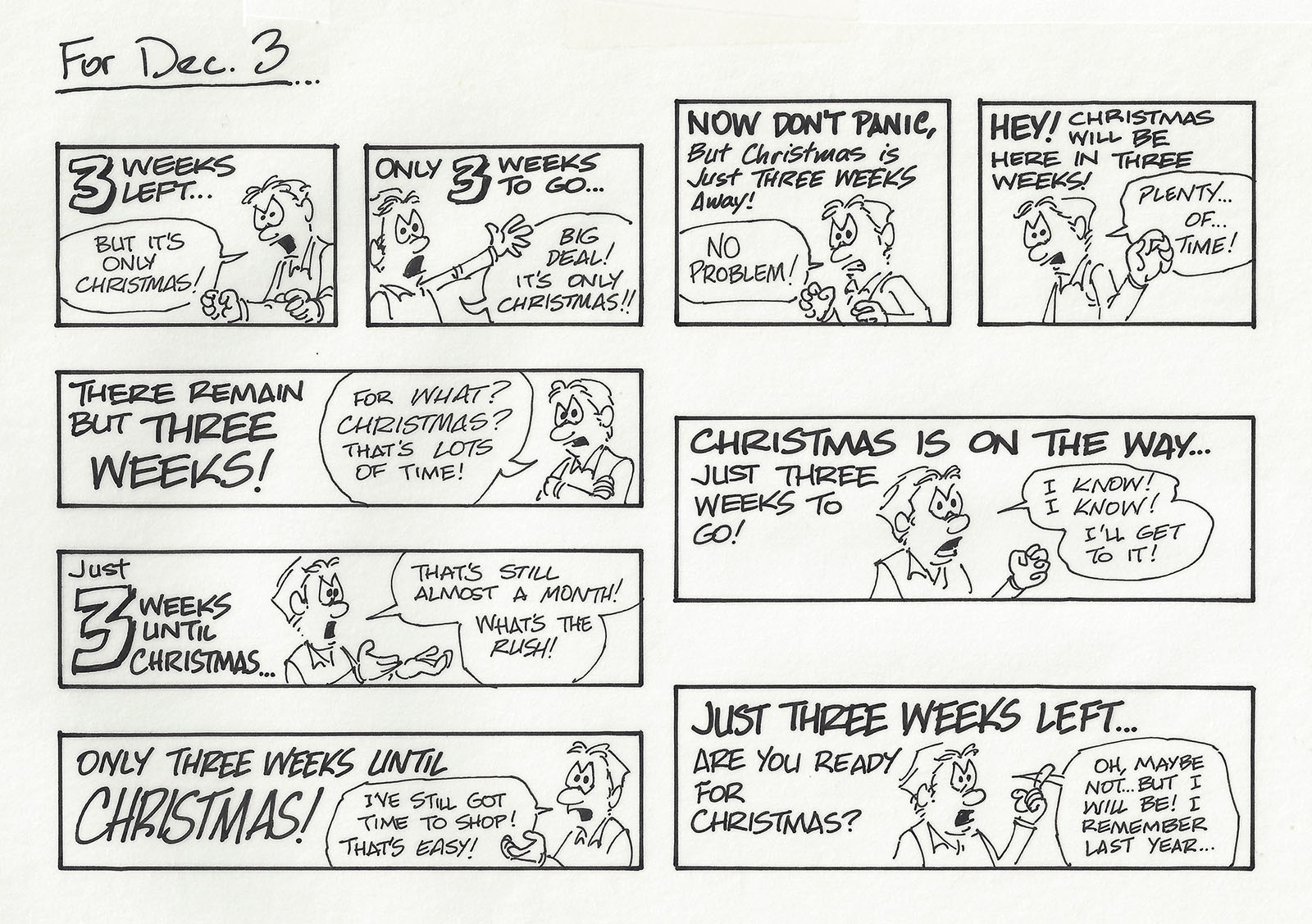 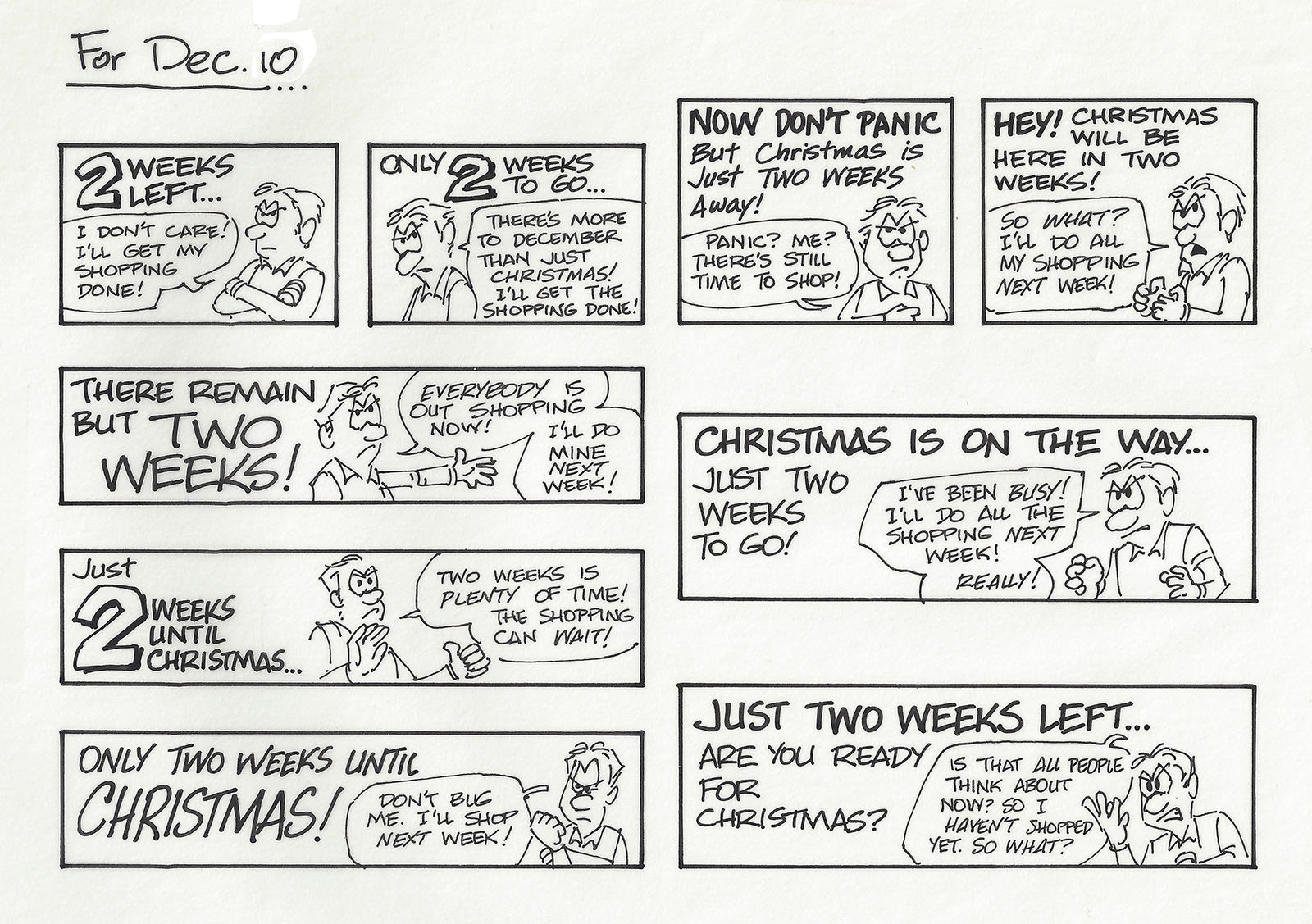 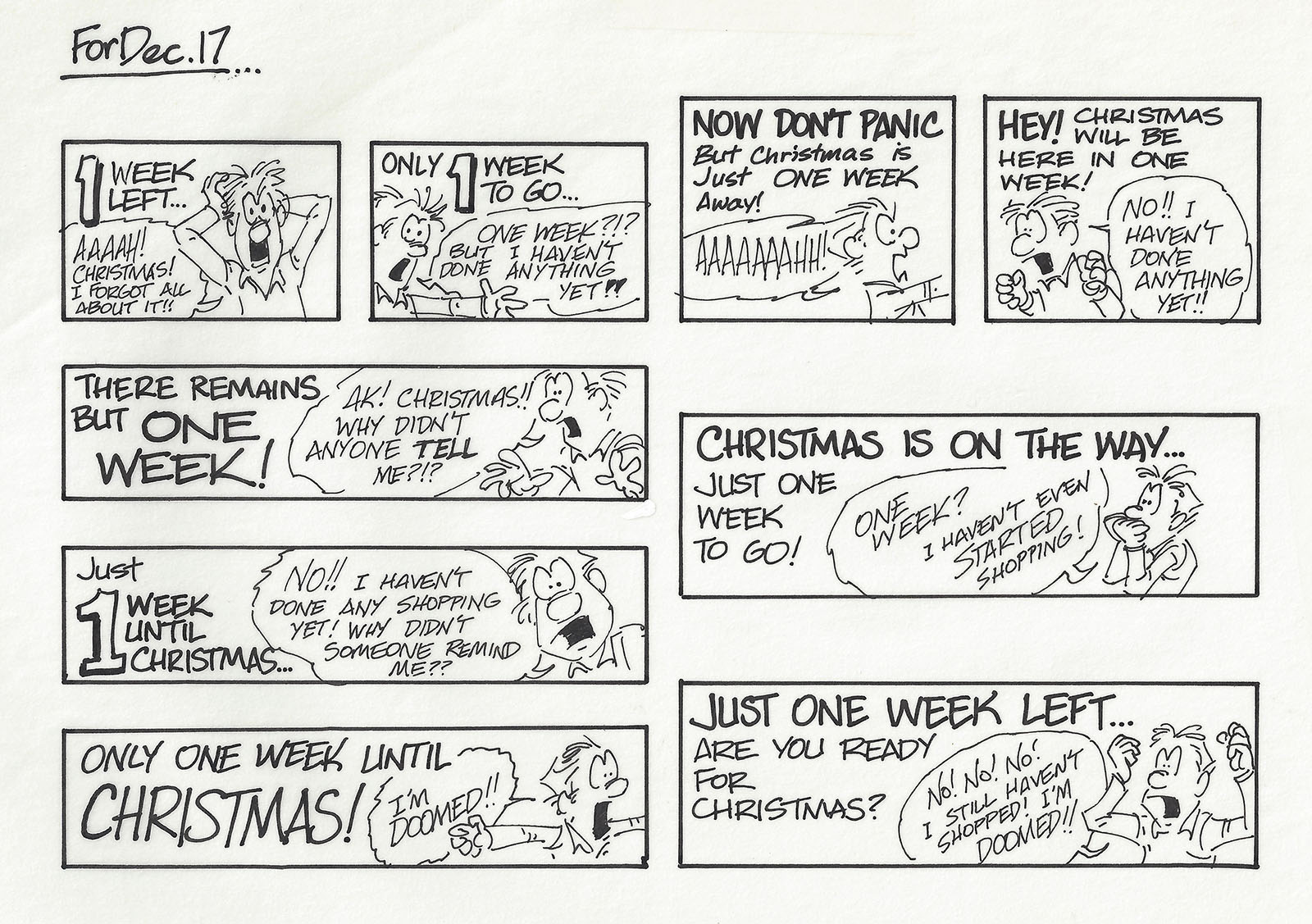 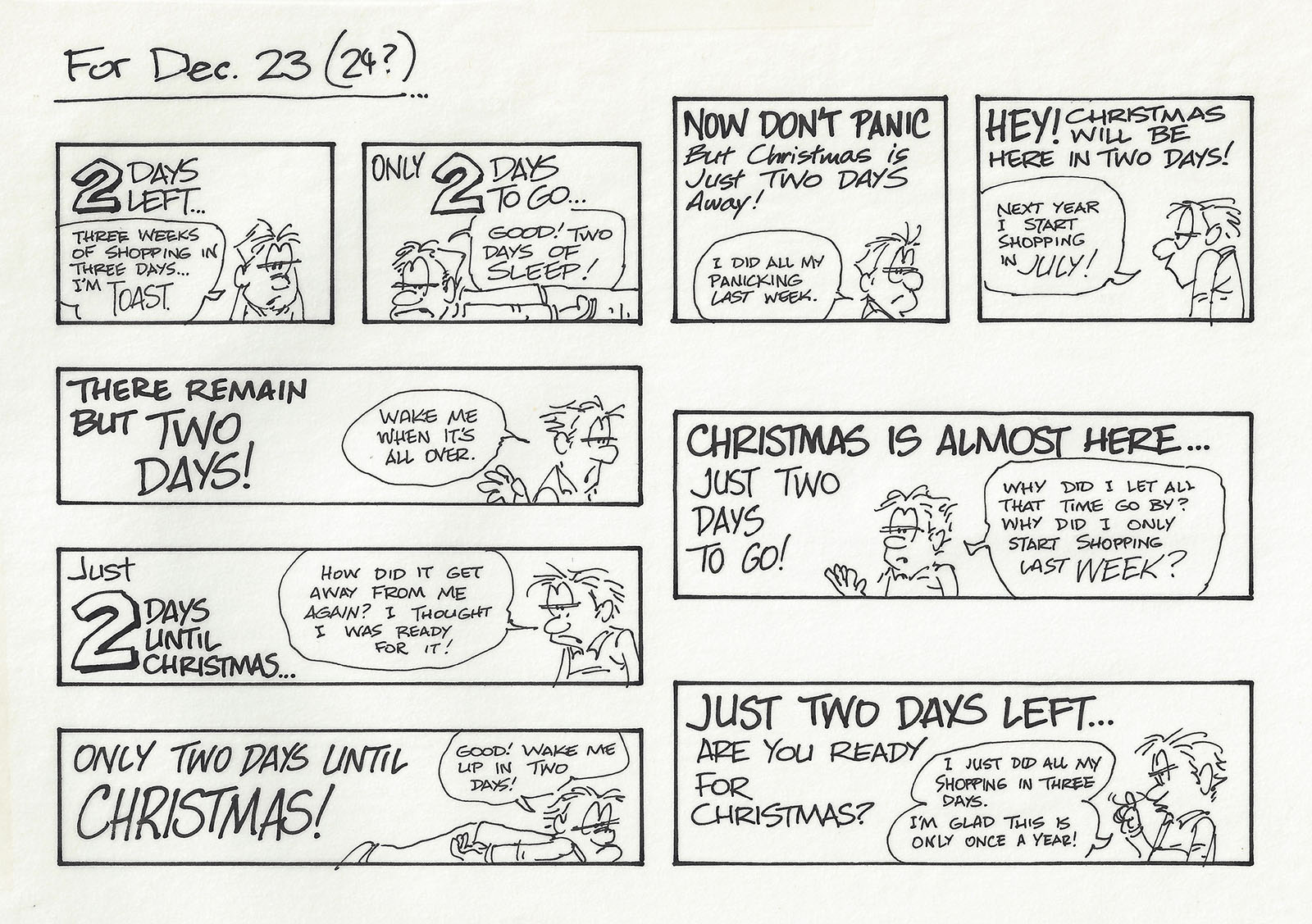 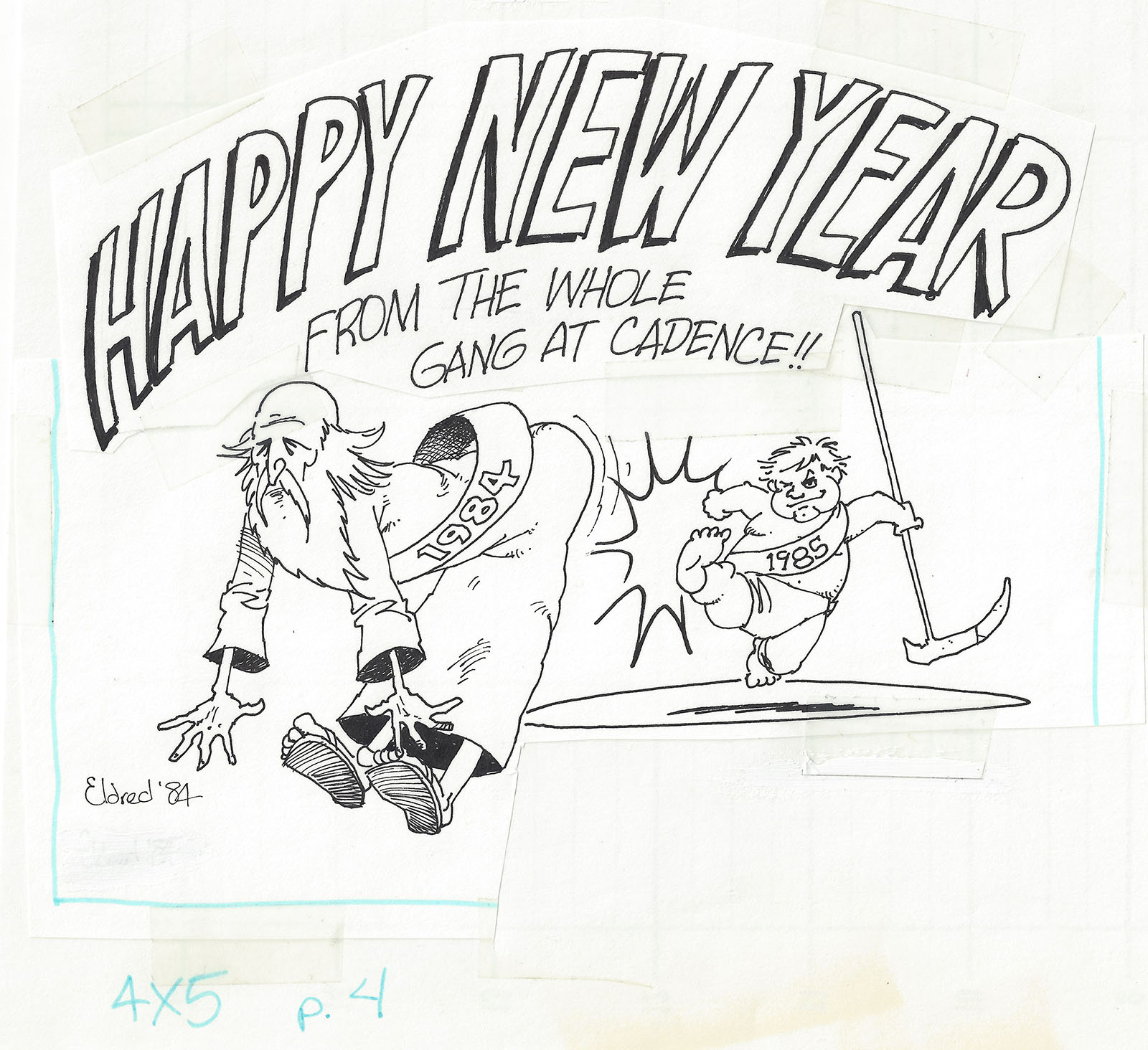 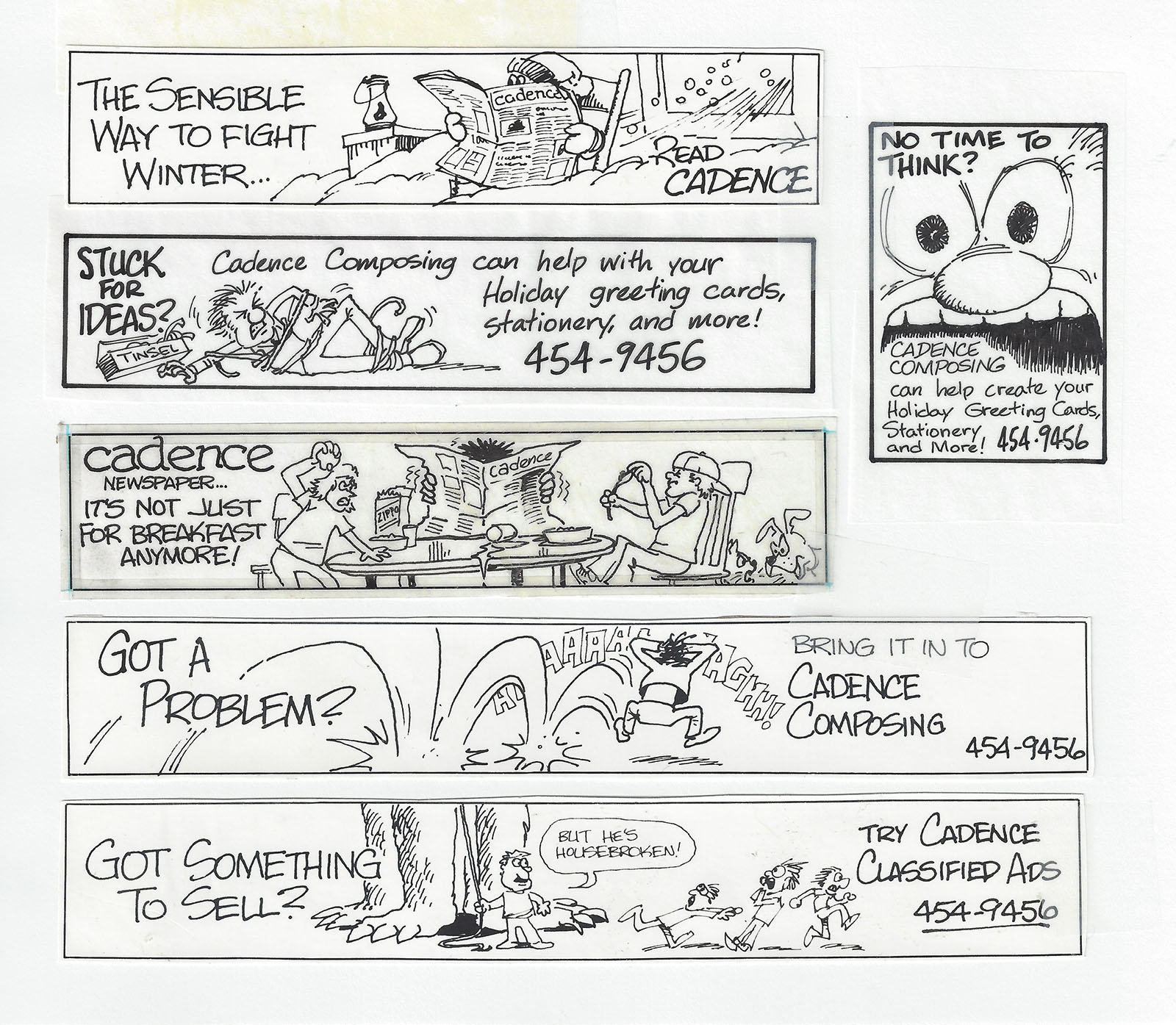 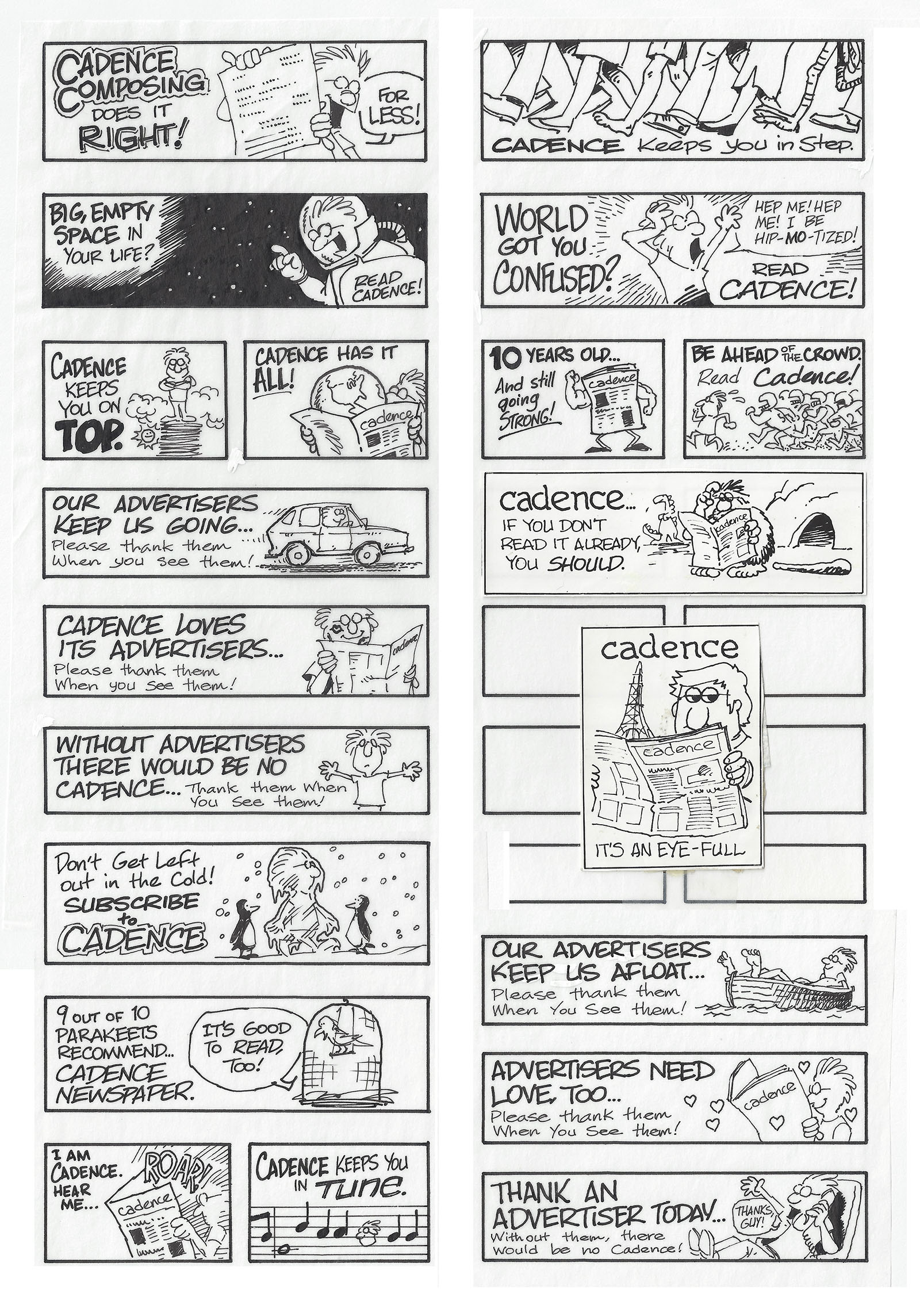