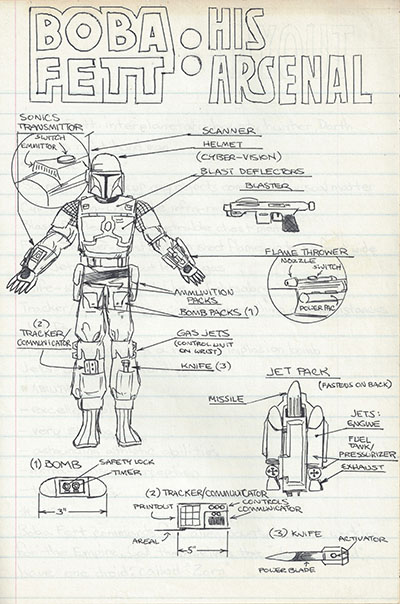 None of us appreciated it at the time, but the best quality of Star Wars in its early years was restraint.

Before the dark times of synergistic marketing and global brand management, Star Wars was a trickle rather than a flood. Merchandising was modest and world-building was only happening at the edges. When anything came out that enlarged that world just a tiny bit, kids like me eagerly pored over every square inch of it. This made us participants rather than mere observers. The Star Wars galaxy was being built one brick at a time, and our imaginations were the mortar that held those bricks together.

No single character embodied that more than Boba Fett. When he was first introduced in the infamous 1978 Holiday Special (see his segment on Disney+ under the title The Story of the Faithful Wookiee), he wasn’t much more than a costume and a voice. But that costume was such a slam dunk, you could have left out the voice altogether and our imaginations would have done the rest. He could have been anyone under that helmet. Of course, you could say the same about the average Stormtrooper, but this guy was an awesome bounty hunter with a cool name. No kid wanted to be a dumb ol’ Stormtrooper. EVERY kid wanted to be Boba Fett.

Since we weren’t going to get anything more until he showed up on movie screens in 1980, I did what my brain directed me to do: made my own Boba Fett comics.

Again, restraint was the thing that made this possible. Leaving room for our imagination got us Gen-Xers so invested that not even the prequels could shake us loose. When we get a new Star Wars story these days, an encyclopedia comes with it. All the Bricks and all the mortar, pre-assembled. Or, to apply another metaphor, what used to be a playground is now a dispiriting minefield of trivia. I’ll take the playground any day.

My first outing was this 7-page story that I tucked into a larger Star Wars scrapbook I made for myself. My visual reference at the time was probably just a picture of the forthcoming action figure. We didn’t know what his spaceship looked like, so I gave him a TIE fighter and sent him off on a job for the empire. It would end up being the first of many.

This was issue 6 of my own personal Star Wars comic series, which can be seen in full here.

For my second outing, I gave Boba Fett a ship, a gang, and every super-power imaginable including E.S.P. and telekenesis. Of course, only a truly otherworldly character could stand against him, so I borrowed Captain Universe from Marvel’s Micronauts comic (another thing I was obsessed with). I’m sure his name, Luminos, was swiped from some other source. The main discovery I took from this one was that a story could start in progress without a lot of tedious setup. That’s a lesson that stuck. 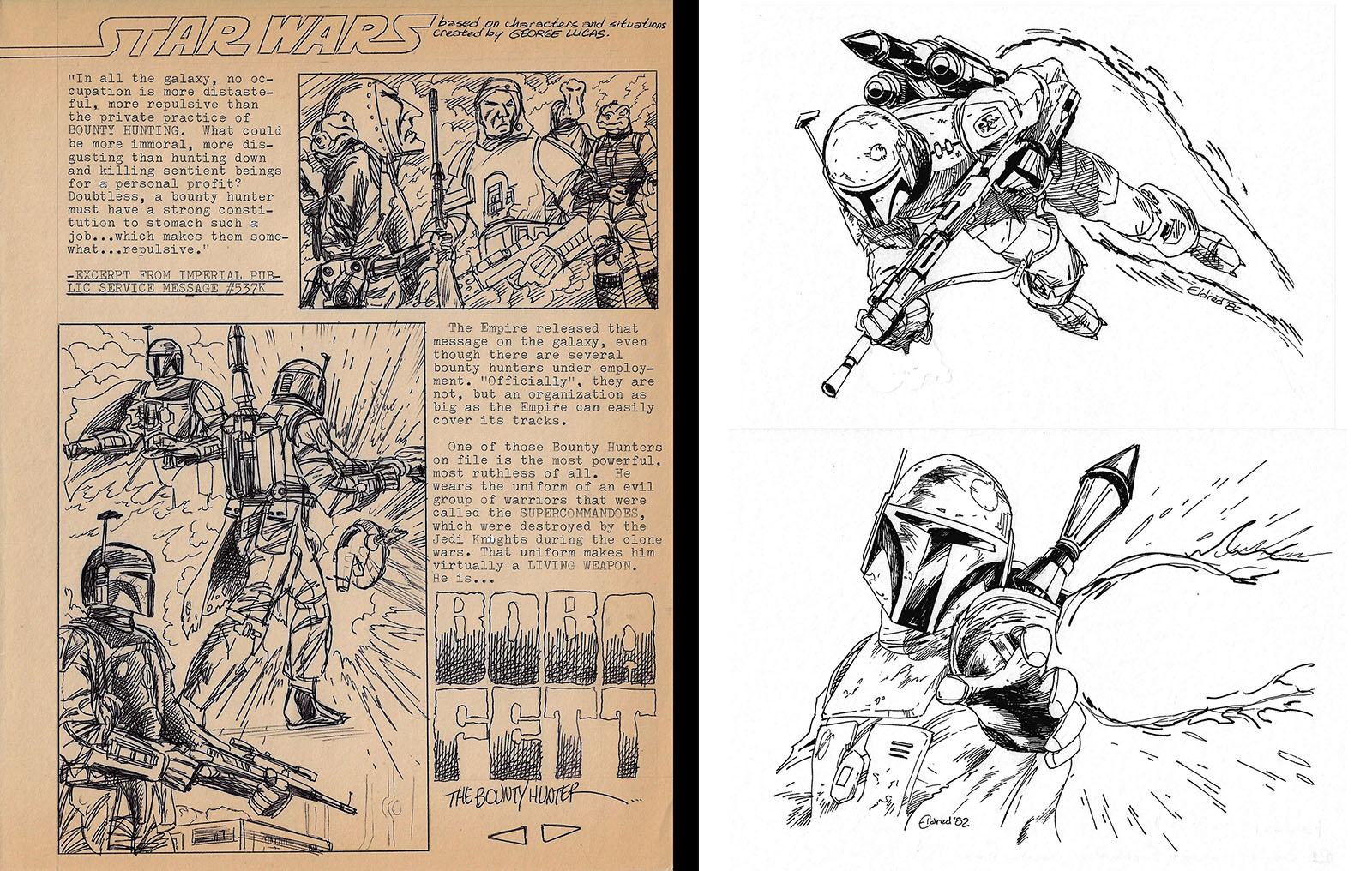 In the fall of 1980, I took a class called “Comic Book Production” from the local arts college and leveled up my skills considerably from the notebook paper days. Now I was doing longer-form Star Wars stories (to be posted in future updates) with more care and pre-planning. Once in a while I’d stall out, though. That happened with this story, which I just called Boba Fett the Bounty Hunter. I have no memory of what the story was going to be, but I still like the tone I started out with.

In late 1981, I discovered the world of Star Wars fanzines and everything went into overdrive. It gave me my first outlet to make comics for others, and it became my reason to exist. I also offered my services as an illustrator for other people’s fanfic, which led to this project. These were done for a story called Interrupted Journey, which took place as Boba Fett was transporting the frozen Han Solo to Jabba. It was published in a ‘zine called Legends of Light in August ’82. There was plenty of visual reference by this time, including the Slave 1 model kit on my shelf. 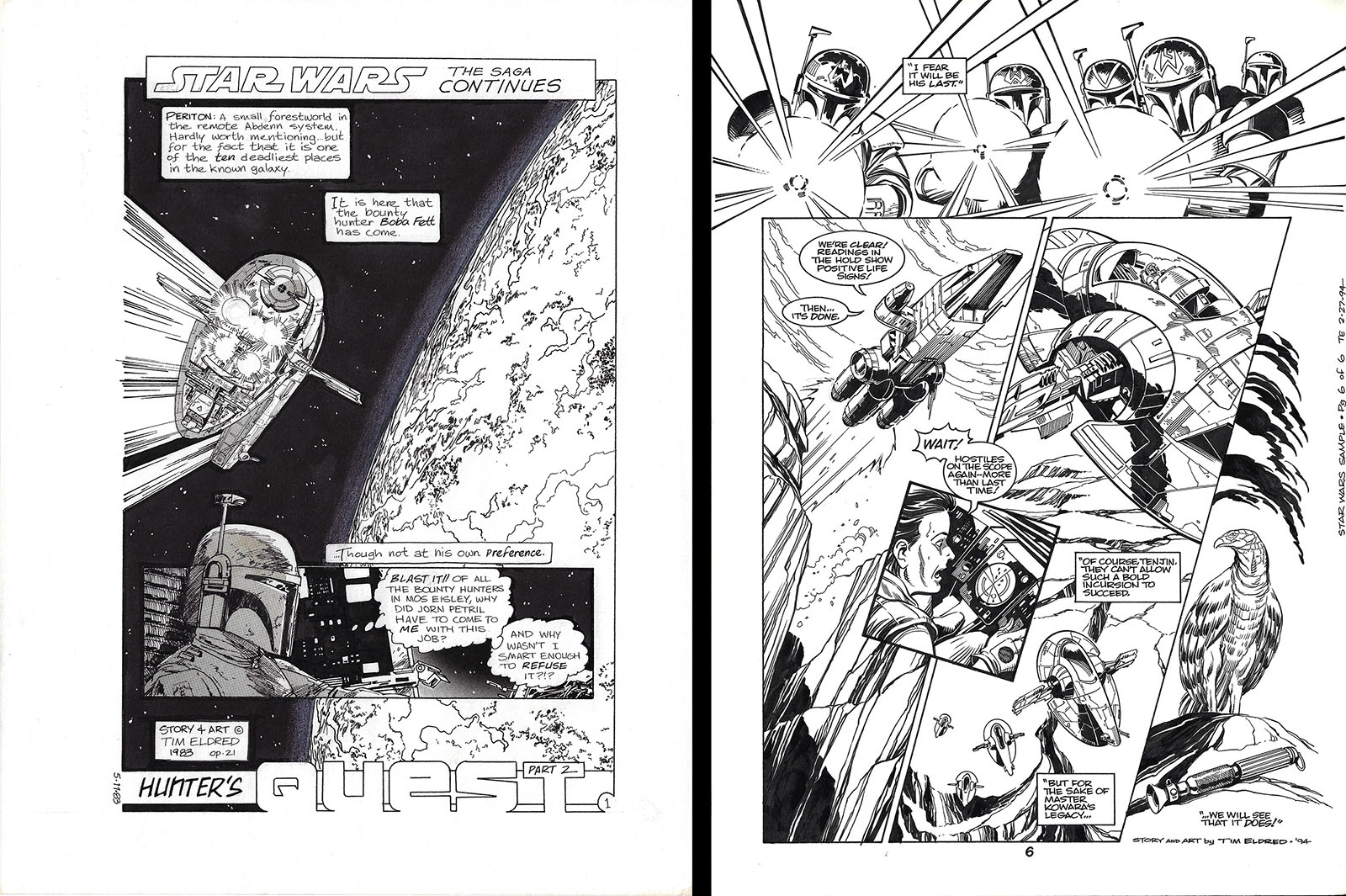 I wrote and drew this one during a time of transition from ballpoint pens to technical pens, which were far more precise. In the first chapter (August ’82) I was drawing with ballpoint and lettering with the others. When I got to chapter 2 (May ’83) I’d left the ballpoints behind for good, and the results were much improved. However, I only got five pages into chapter 2 before I ran dry and put it away. I drew these pages right before Return of the Jedi came out, so maybe seeing Fett go down like a punk ruined my motivation. My files tell me I drew this for a ‘zine called Jedi, but I don’t think it got that far.

My final go-round with Boba Fett didn’t involve Boba Fett himself, but a wild idea I had to put a whole BUNCH of Mandalorians in a single story. I know, it’s utter madness. Nobody in their right mind would ever try that.

See it here (end of the page)