By the end of the 1970s, I knew for sure I wanted to somehow draw comics for a living one day. I was permanently seduced by the magic of capturing the stories in my head and preserving them for all time. It was much more satisfying than watching TV, reading a comic book, or playing with toys. That dream would actually come true about ten years later, but I had to get much better at it in the meantime.

Almost everything I liked became fodder for a homemade comic, some of which I regrettably did not keep when they were done. Comics based on G.I.Joe, Marvel characters, Godzilla and others are now long gone and beyond recovery. But Astroblast is one I did hold onto, and it represents one of my first attempts to create an original story.

The main elements of that story were a mishmash of things that floated into my consciousness in 1978 and 1979. I’ll take them one by one…

Astro Blast was a 1978 action toy from Mattel that allowed you to fire rockets from an air pump that looked like a futuristic missile base. This supplied the name and location for my story. (See a review of the toy on Youtube here.) It was one of the many treasures taken out of circulation in 1979 when a Battlestar Galactica toy from Mattel caused the choking hazard heard around the world. But no matter. The idea of the thing was more valuable to me than the thing itself.

Tobor was another toy that caused a stir in 1978. Made by Schaper, it was a sleek little robot that scooted around in response to a clicker, and the commercials made it look like the best pal you could ever have. The catchphrase at the end of the commercials was instantly cemented into little boy brains: “TOBOR is ROBOT spelled backwards.” How obvious, and yet how clever! I simply had to make Tobor a character in this story. (See video reviews of the toy here and here.)

Then there was Star Hawks. One of the many, many echoes of Star Wars, it was a newspaper strip that ran from fall 1977 to spring 1981. It was drawn by Gil Kane, one of my favorite Marvel artists of the 70s, but I was unaware of it at first. It was twice the size of a standard strip, so most newspapers didn’t pick it up. Thus, I didn’t learn about it until the first paperback collection was published in 1979. It hooked me right away and had a huge influence on my character art (which should be super obvious to those in the know). Read the Star Hawks Wikipedia entry here.

Finally, 1979 was the year of two live-action SF shows: Jason of Star Command and Buck Rogers in the 25th Century. Jason was a 2-season Filmation show featuring a Han Solo-style main character. Buck Rogers premiered first as a movie in March, then as a TV series in September. I eagerly consumed both and they had a general impact on the comics I continued to create, but they had a specific influence on this one.

“Jason” was now, in my opinion, a proper first name for a space hero, but I also needed a last name. Buck Rogers gave me one with a throwaway character who got name-checked just once in the movie: “Thornberry.” Thus I settled on the name Jason Thornberry.

No other context is required here. Astroblast is a wild, corny ride with fightin’ and smoochin’ and way too much information packed into each page. Properly paced, this 16-page story would expand to about 50 were I to redo it today. But that lesson was still to be learned on the long path leading to my dream career. On the other hand, I would soon graduate out of drawing on notebook paper. So that was progress. 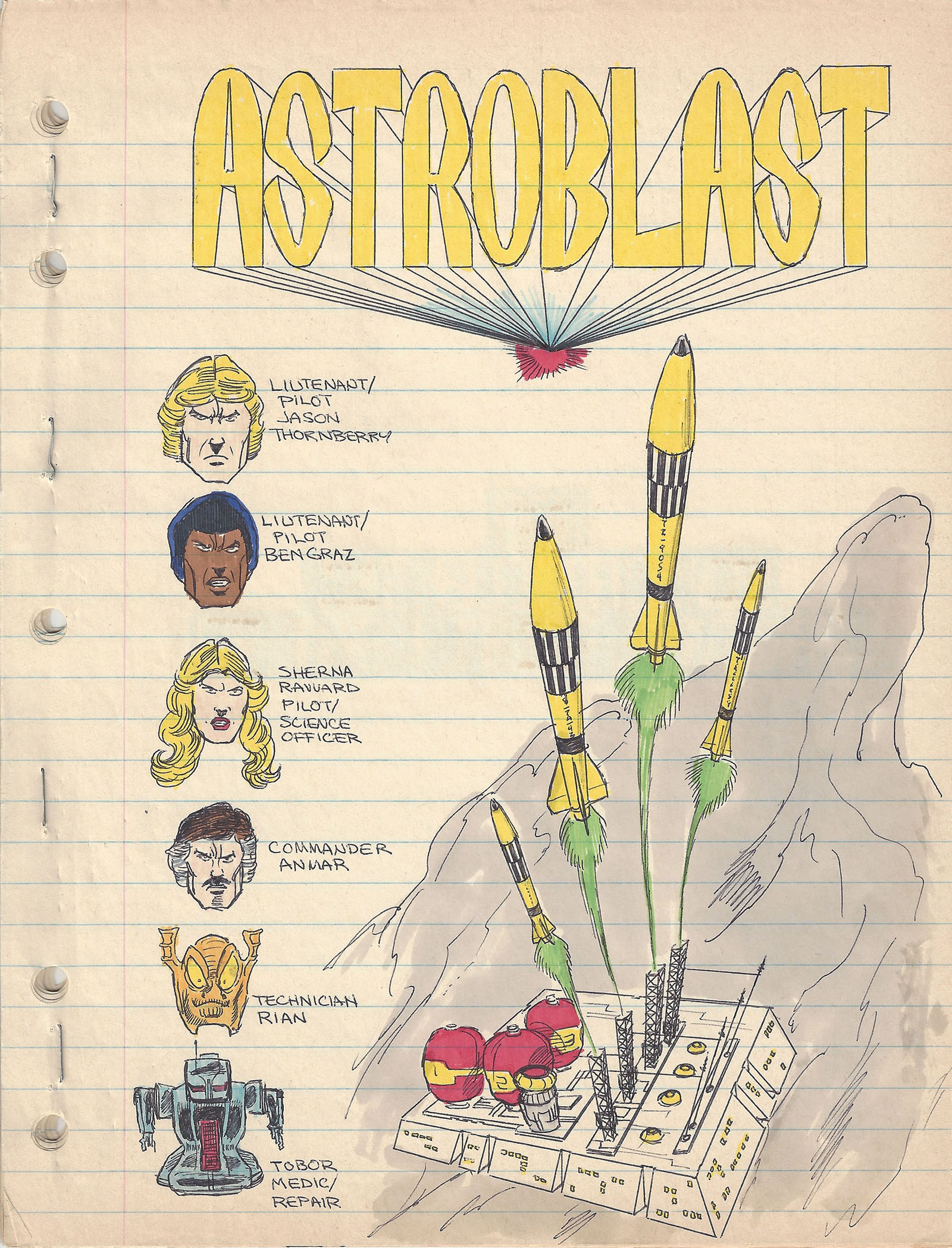 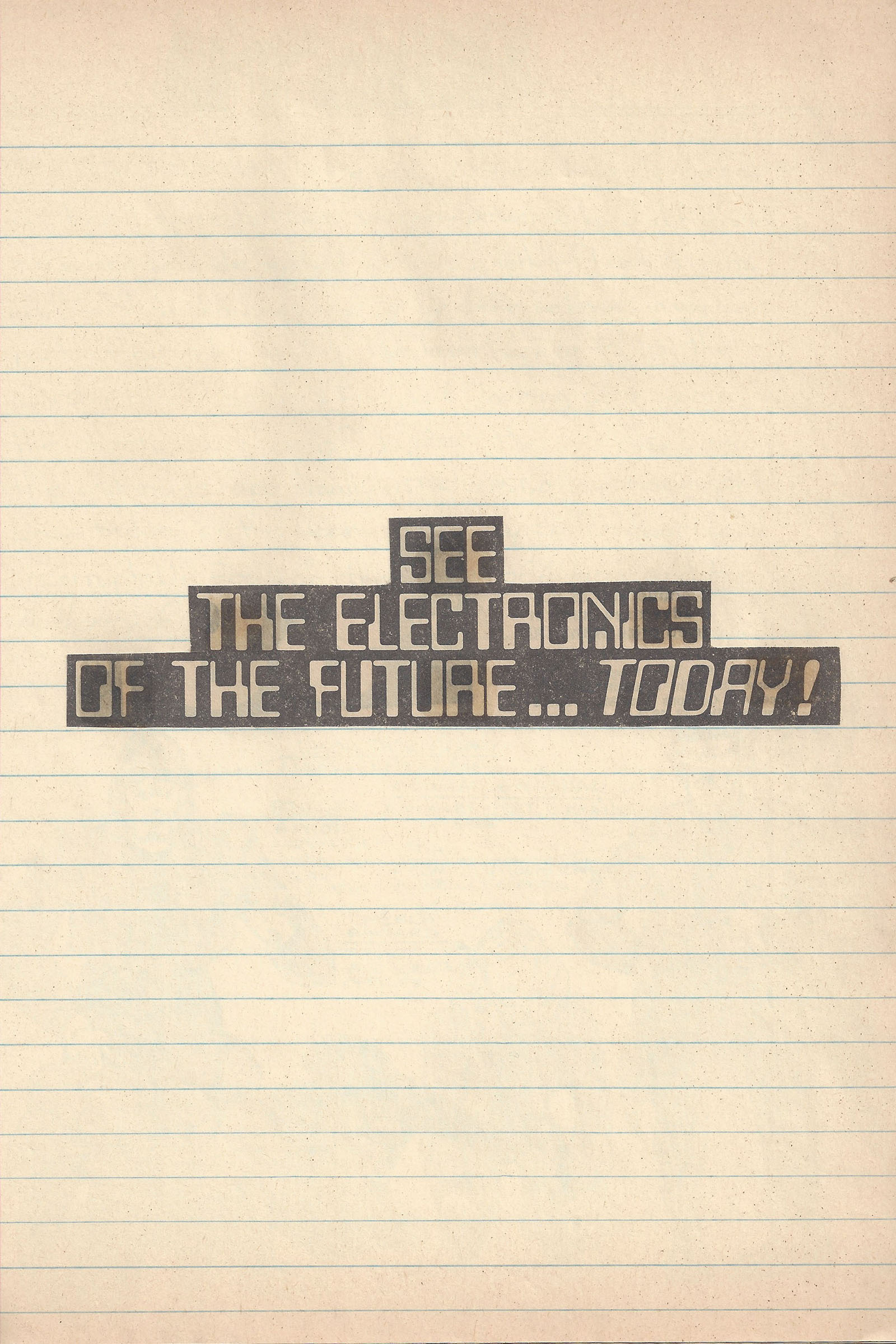 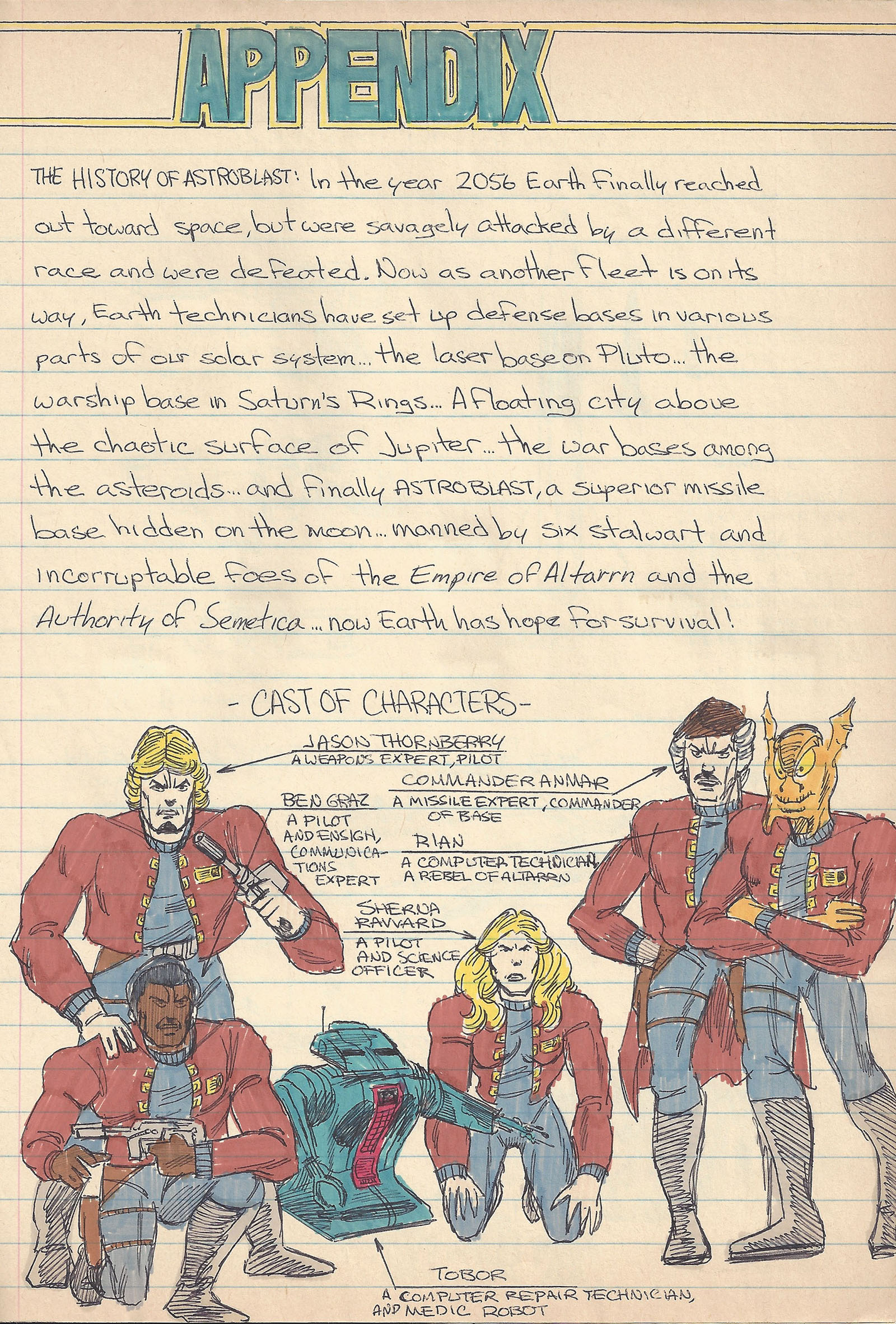 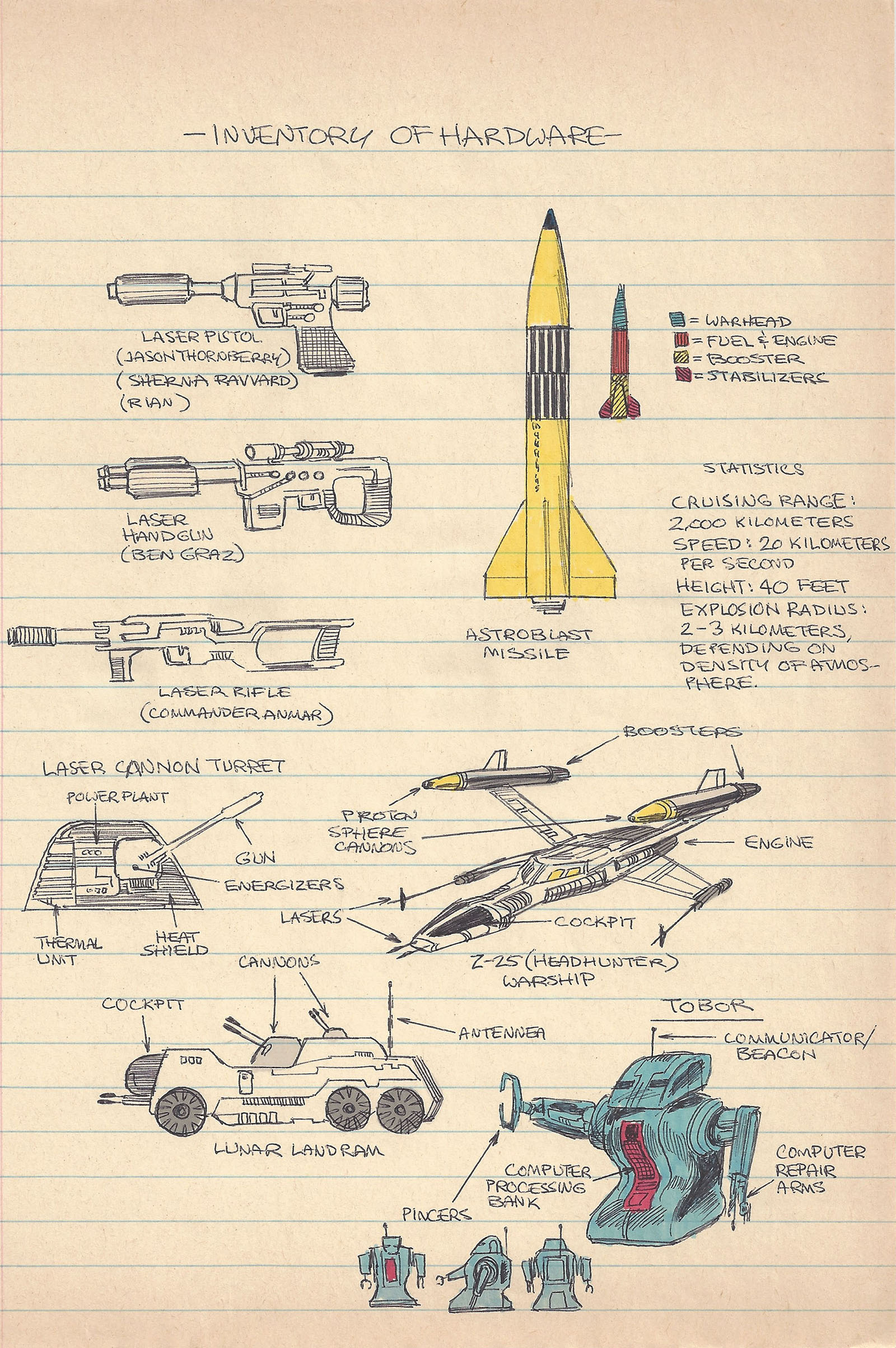 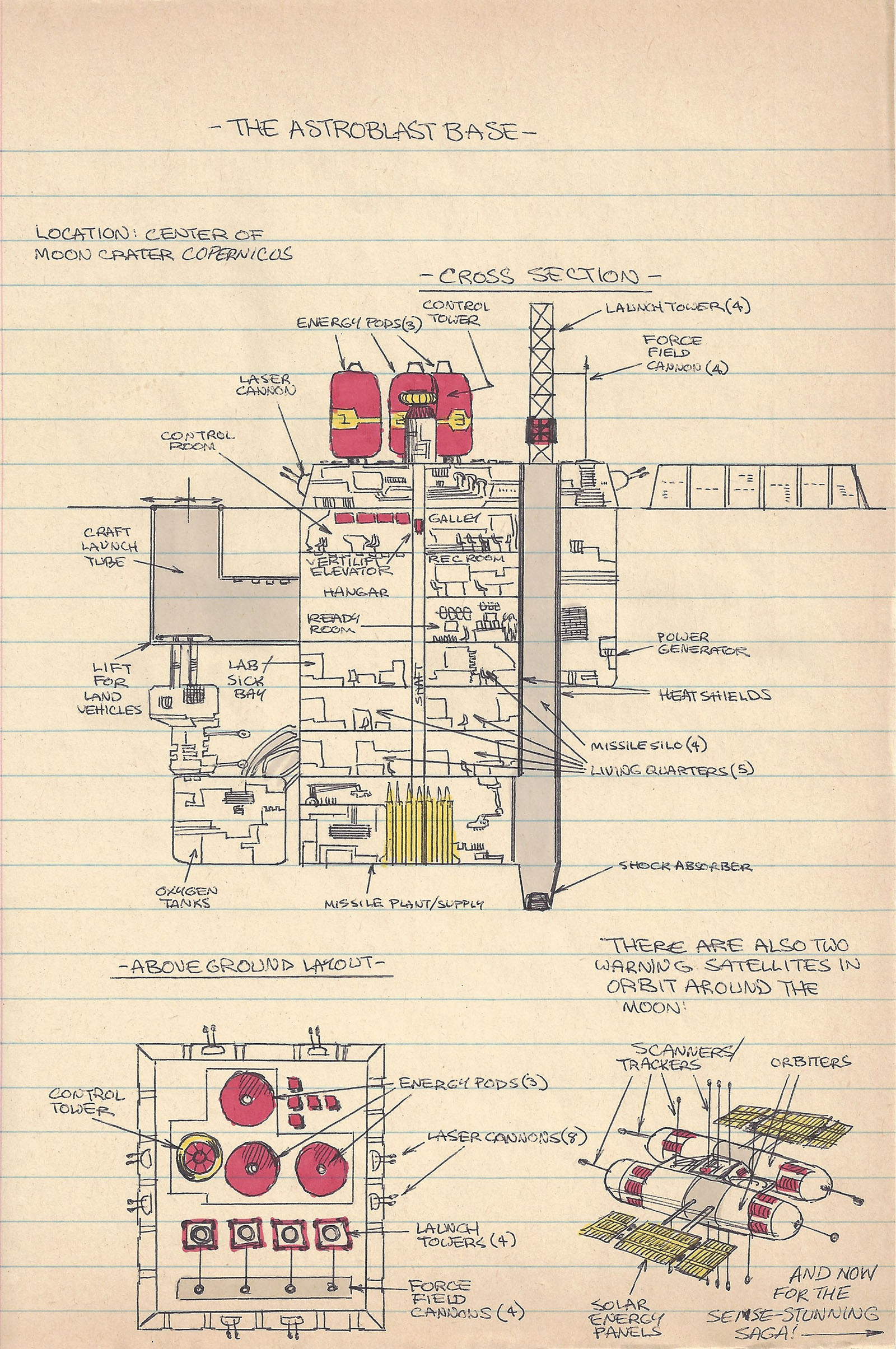 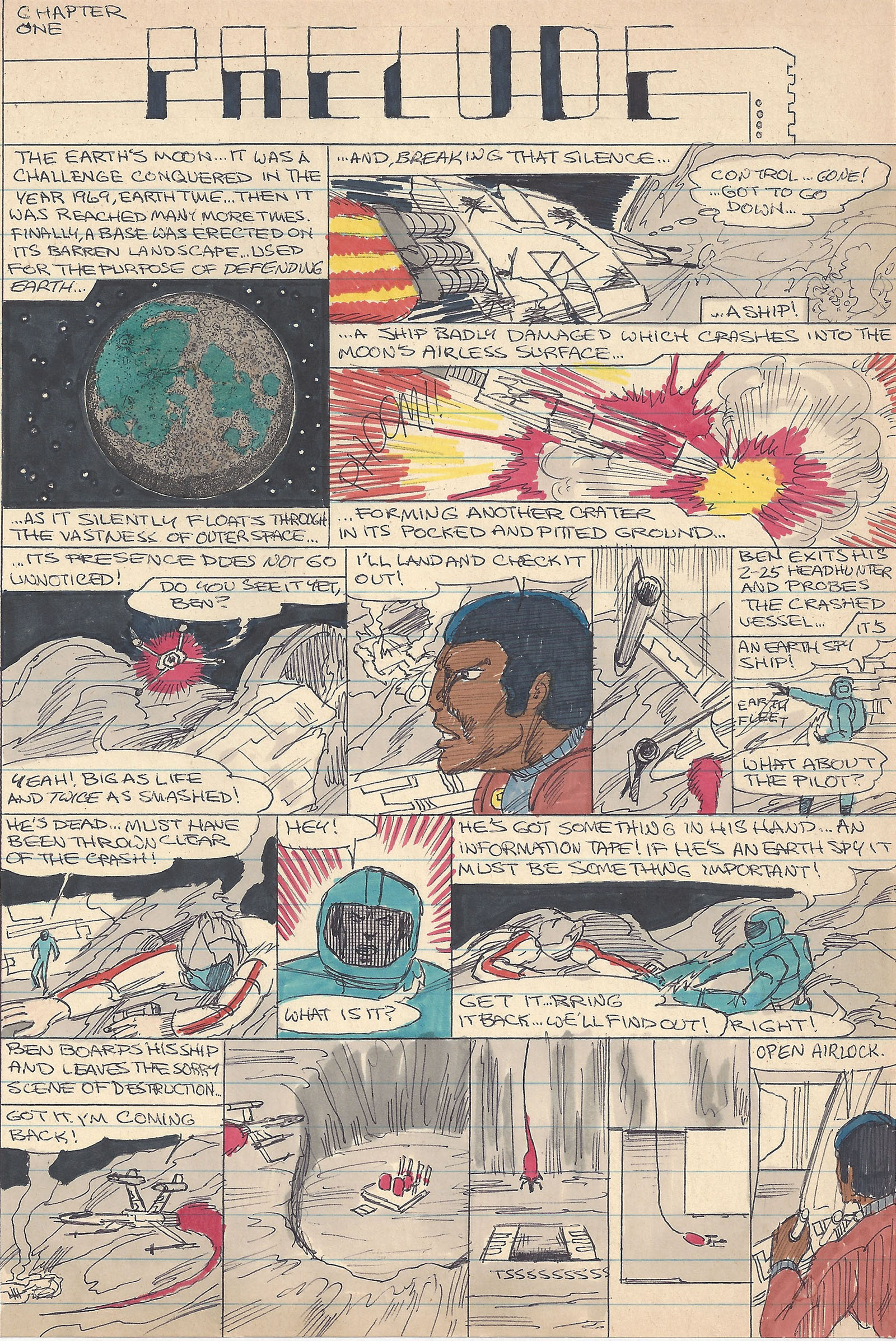 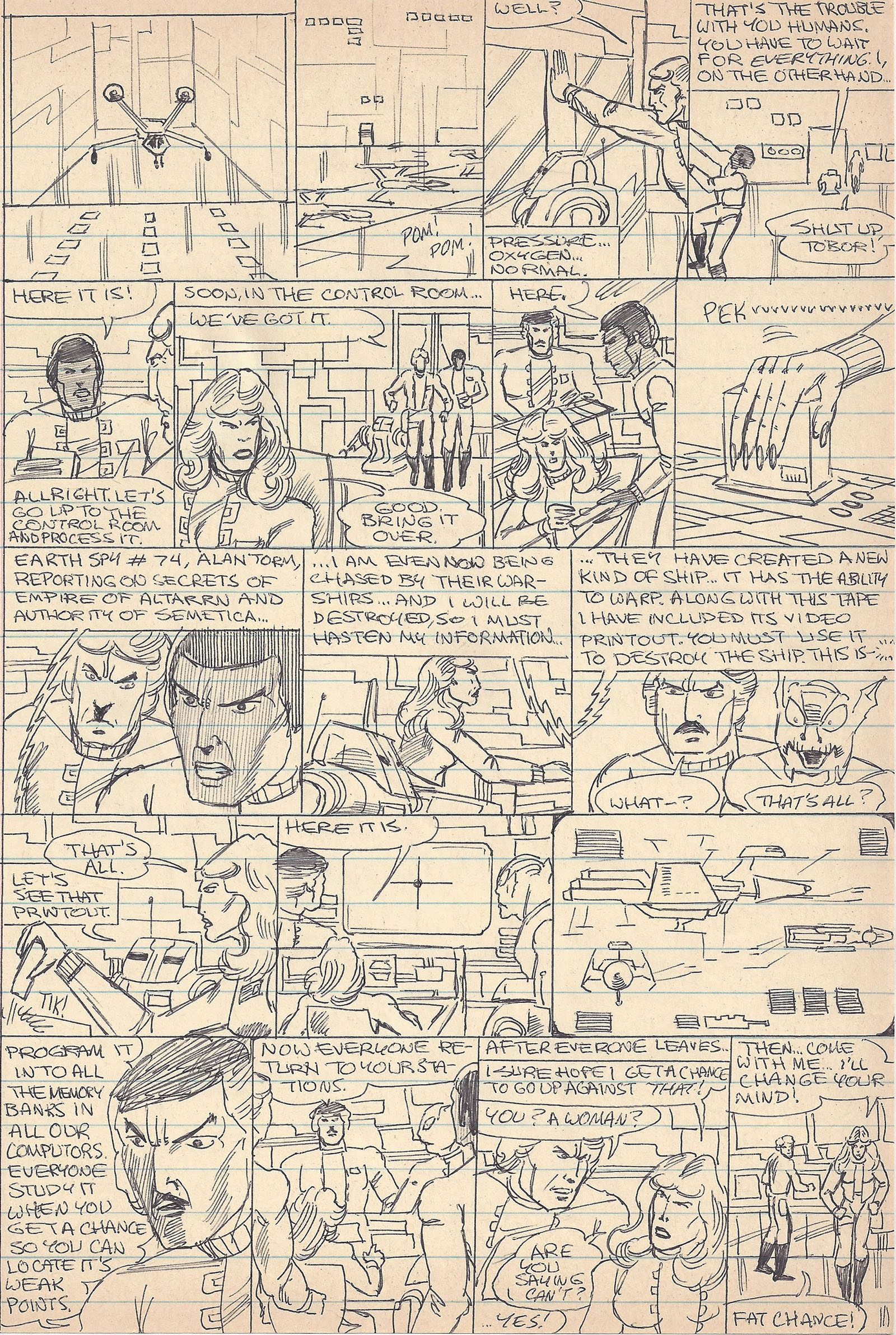 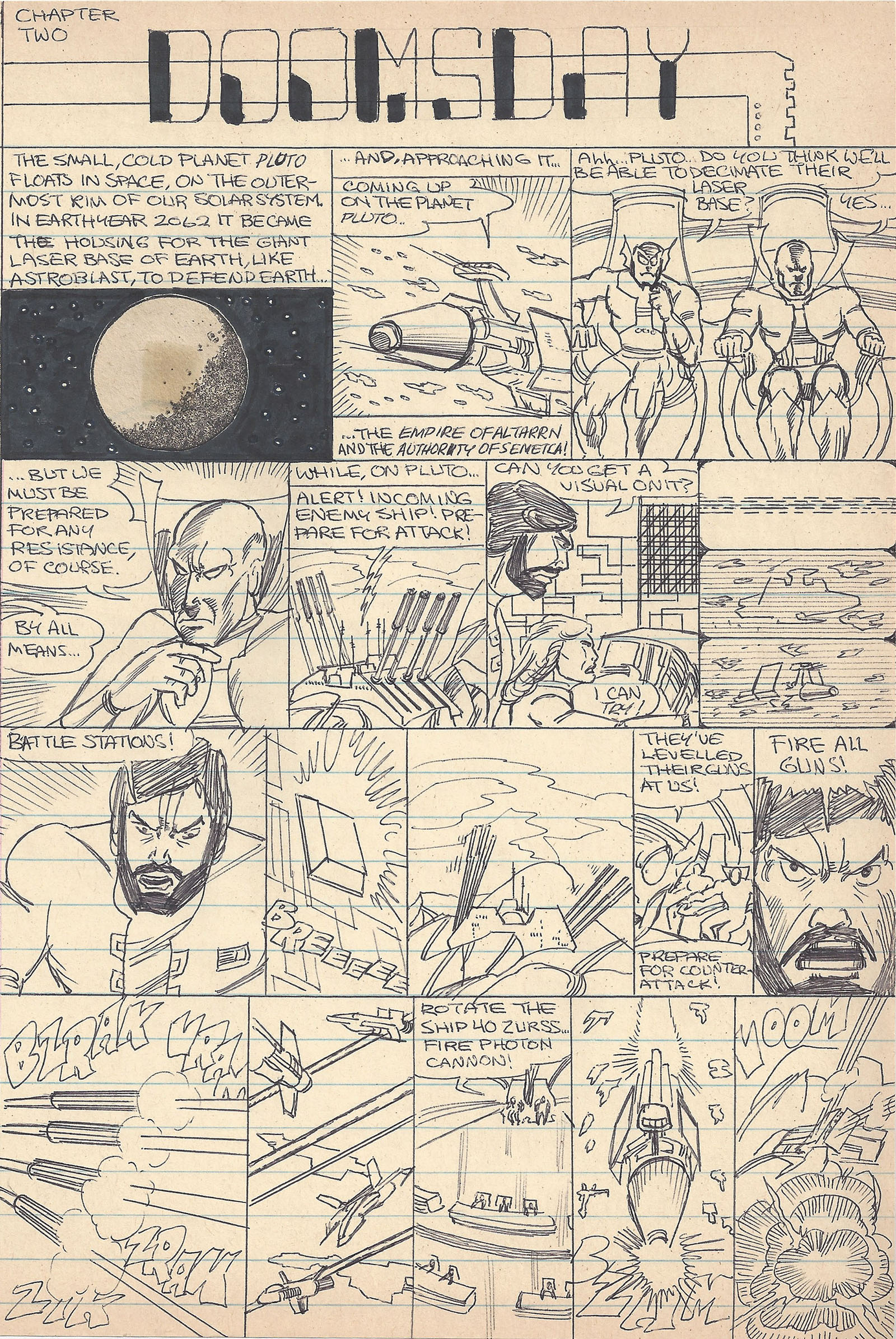 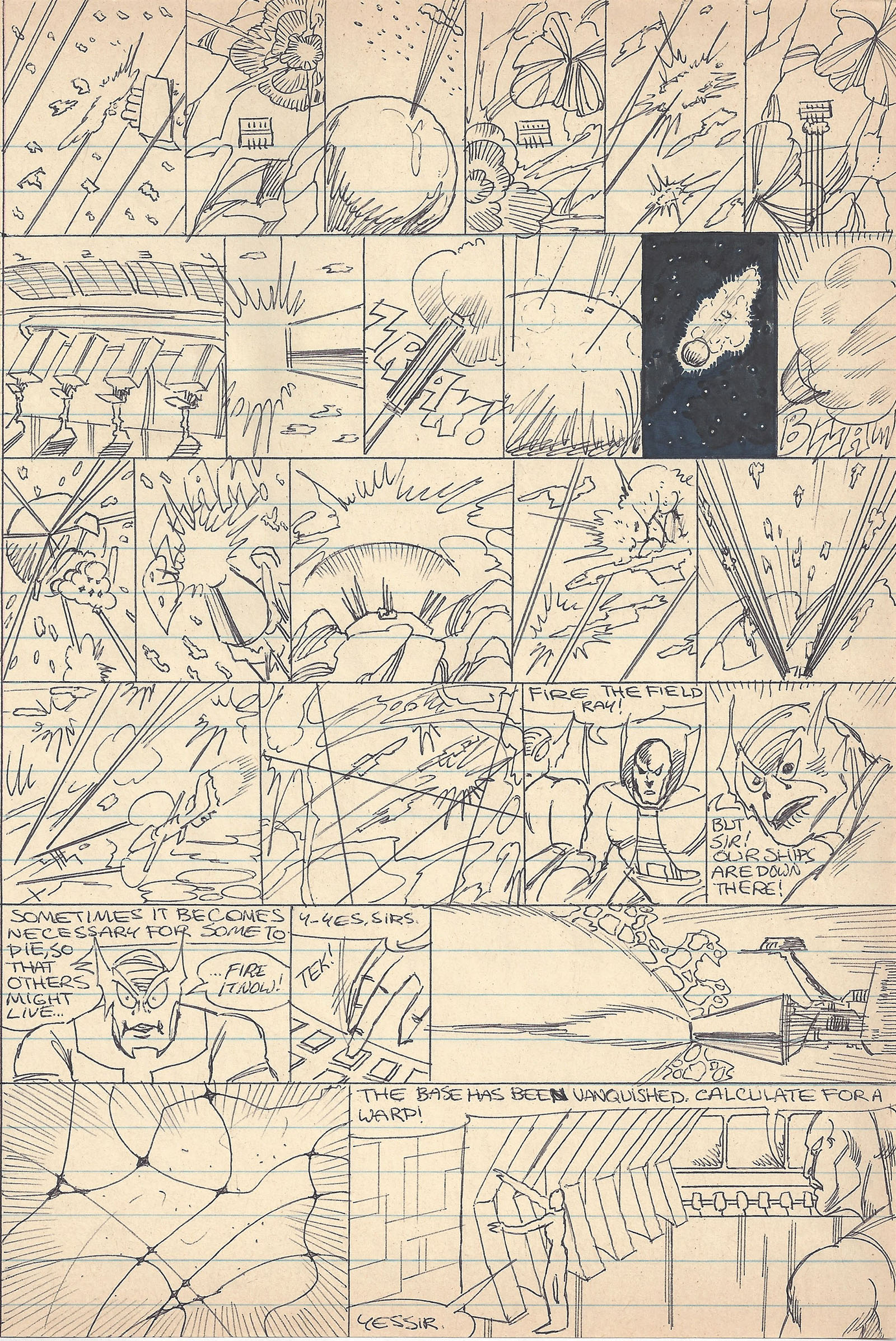 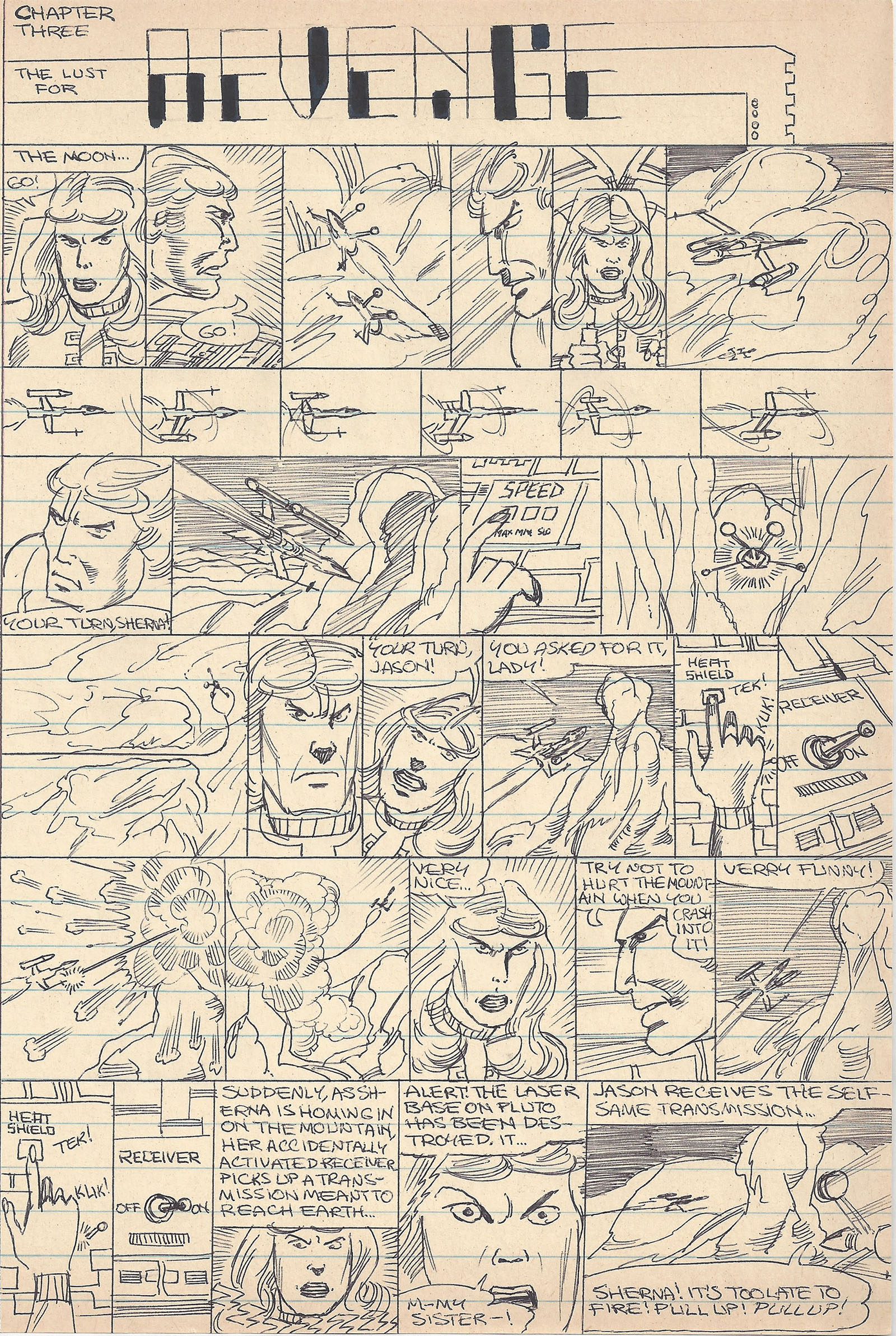 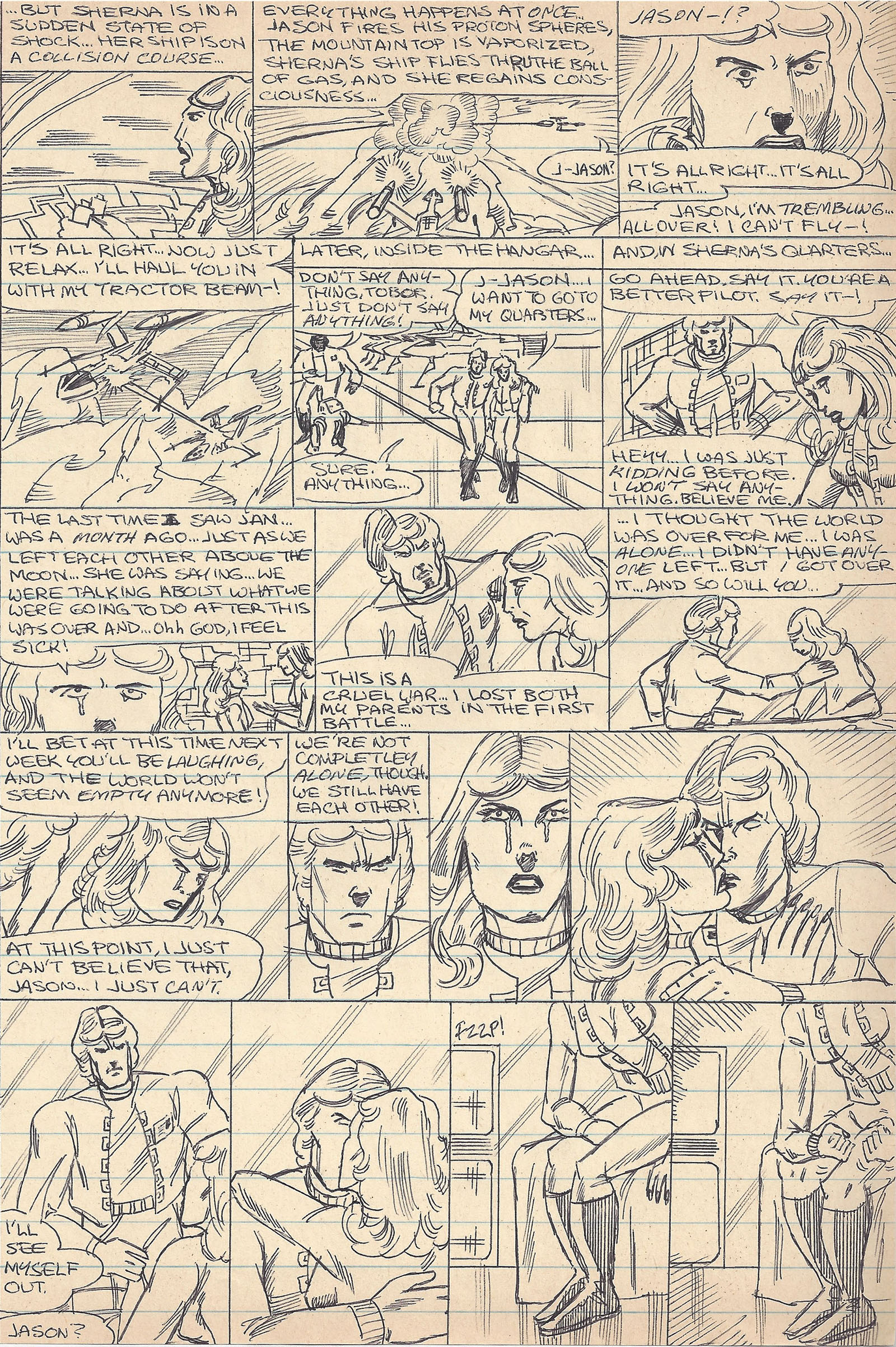 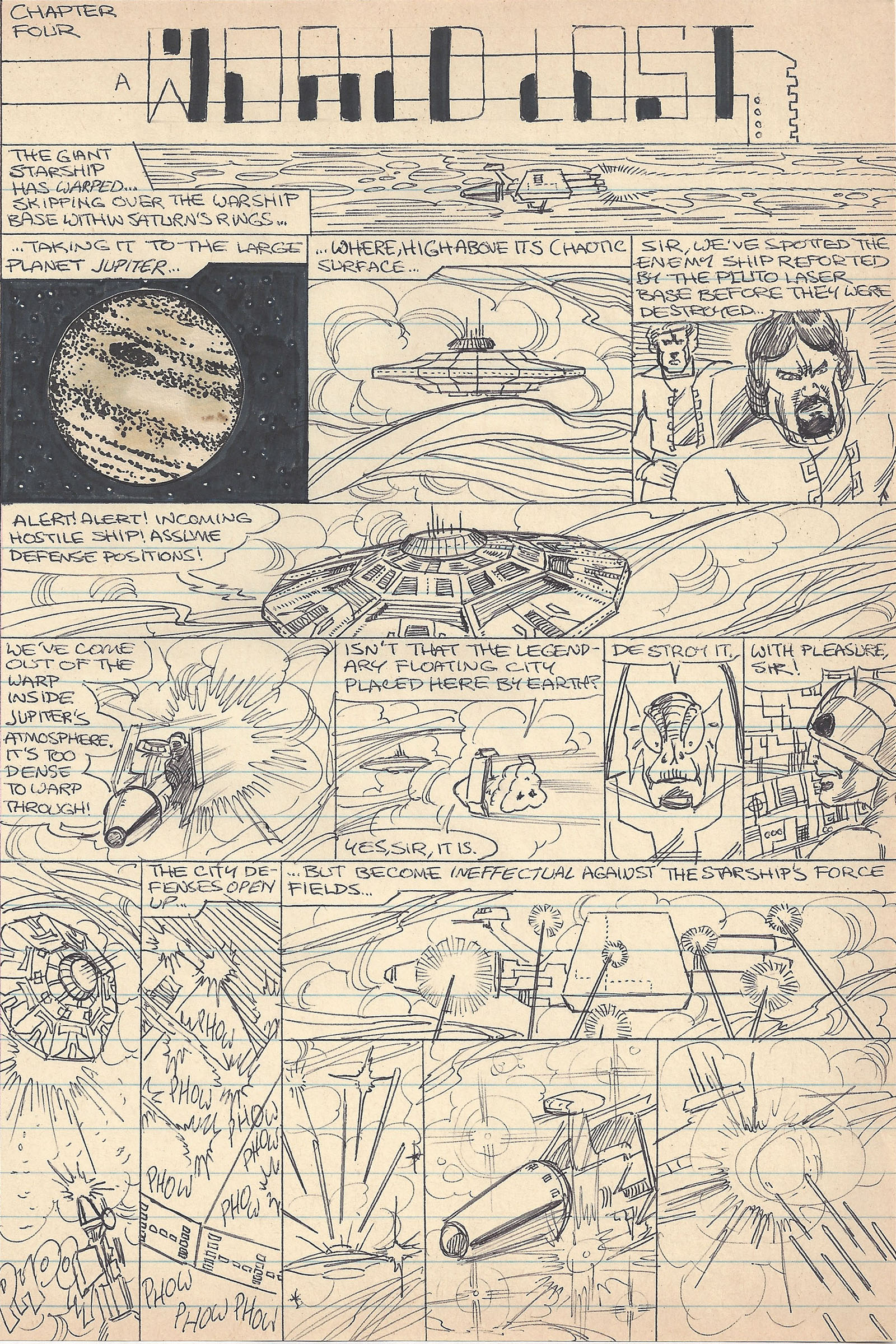 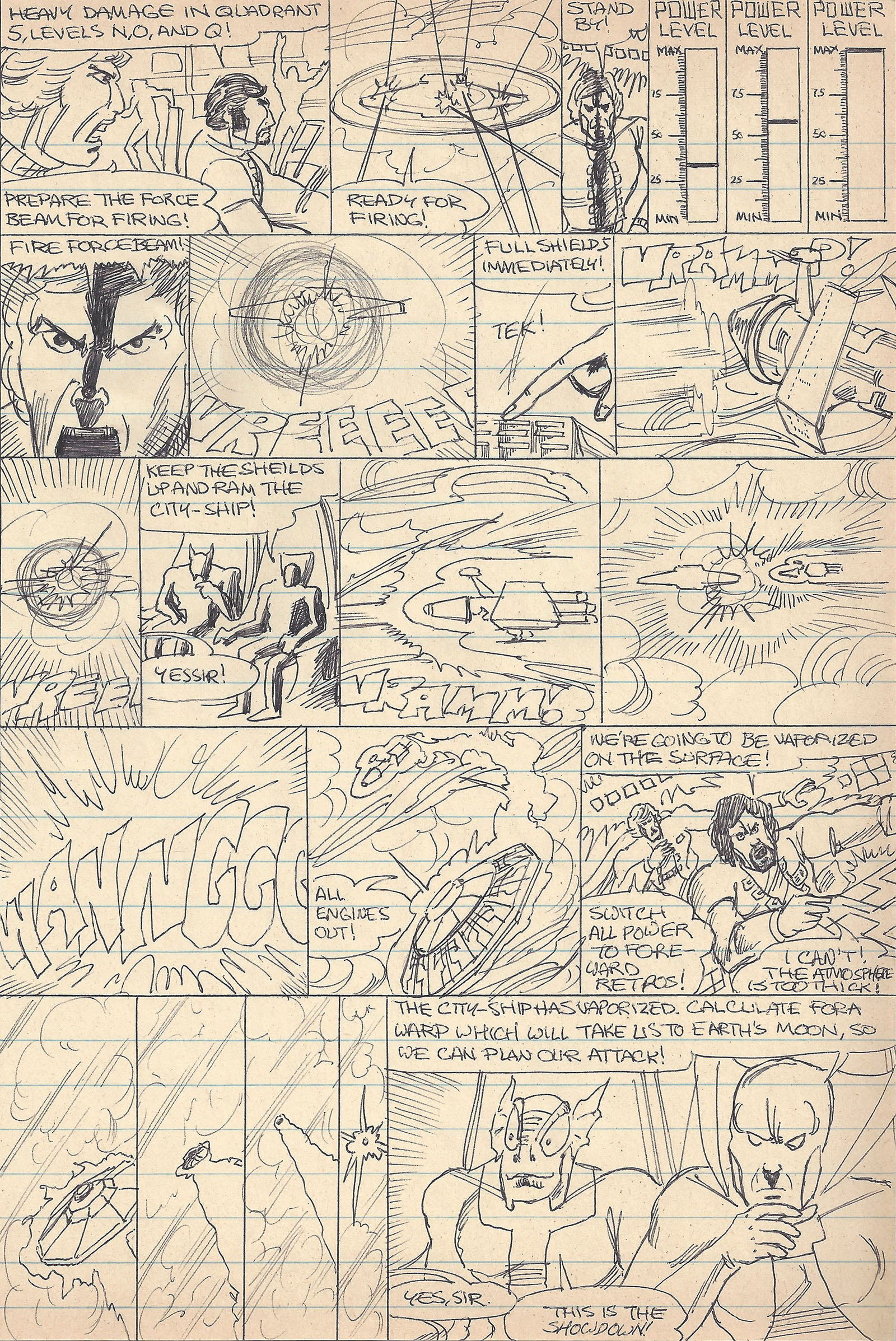 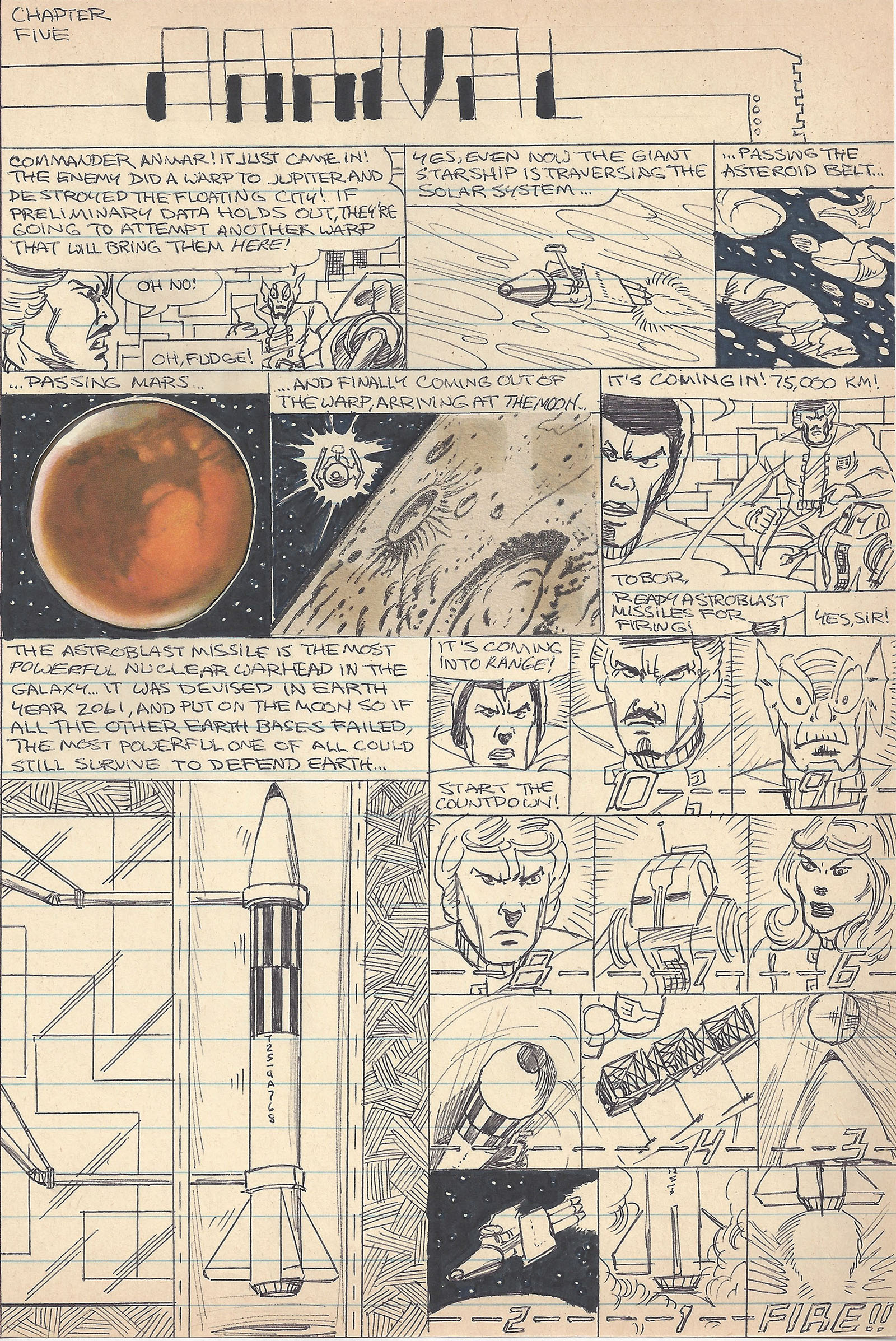 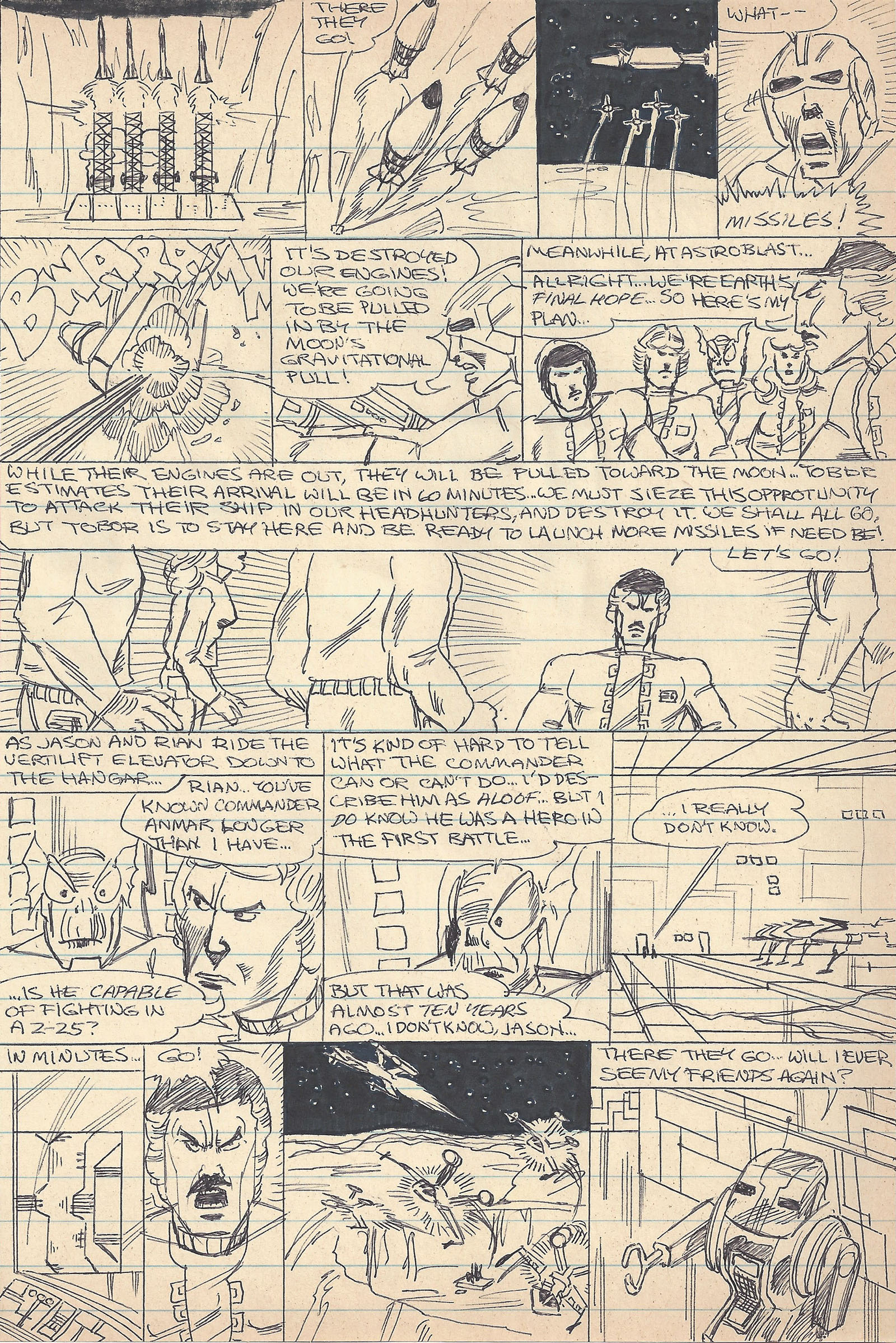 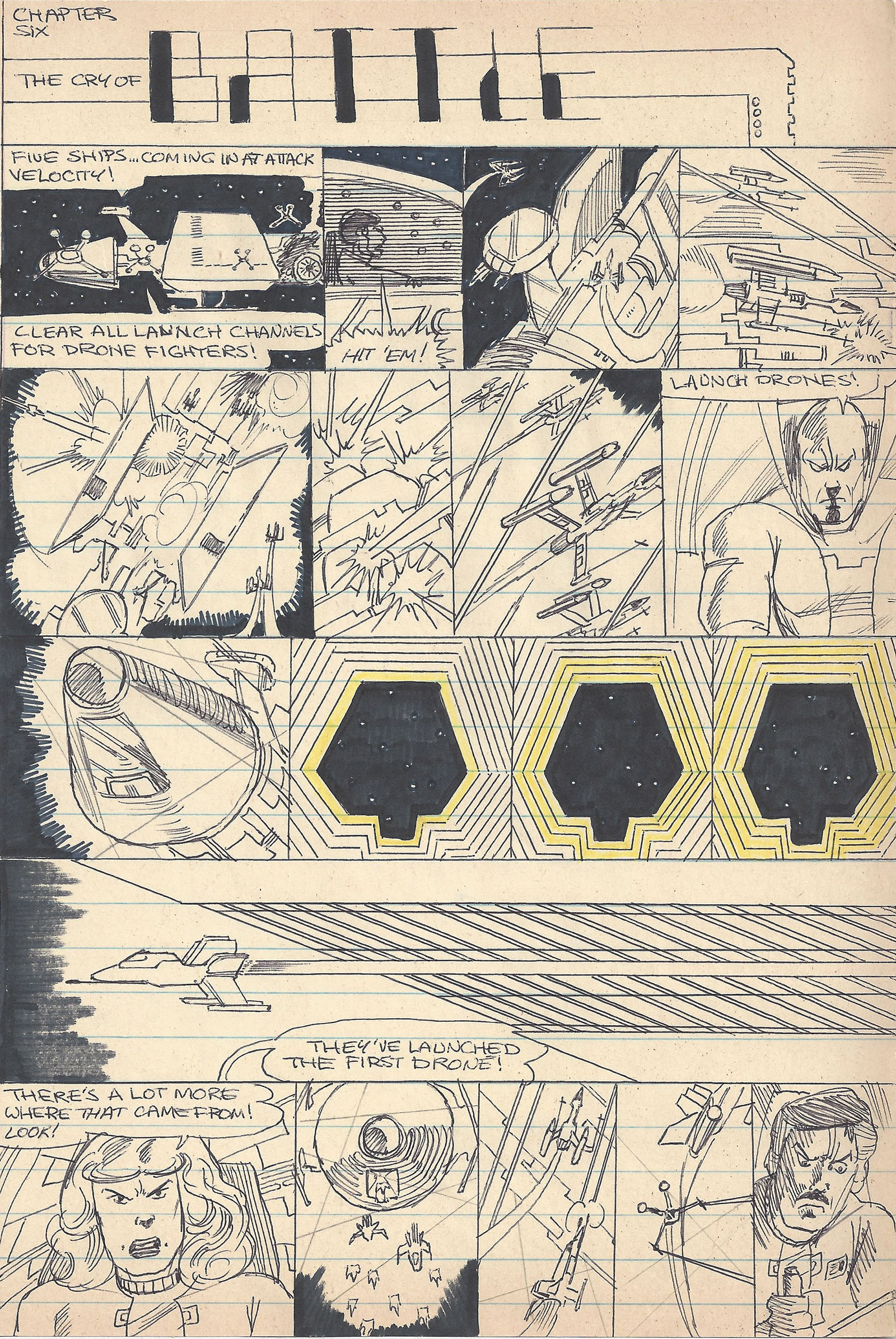 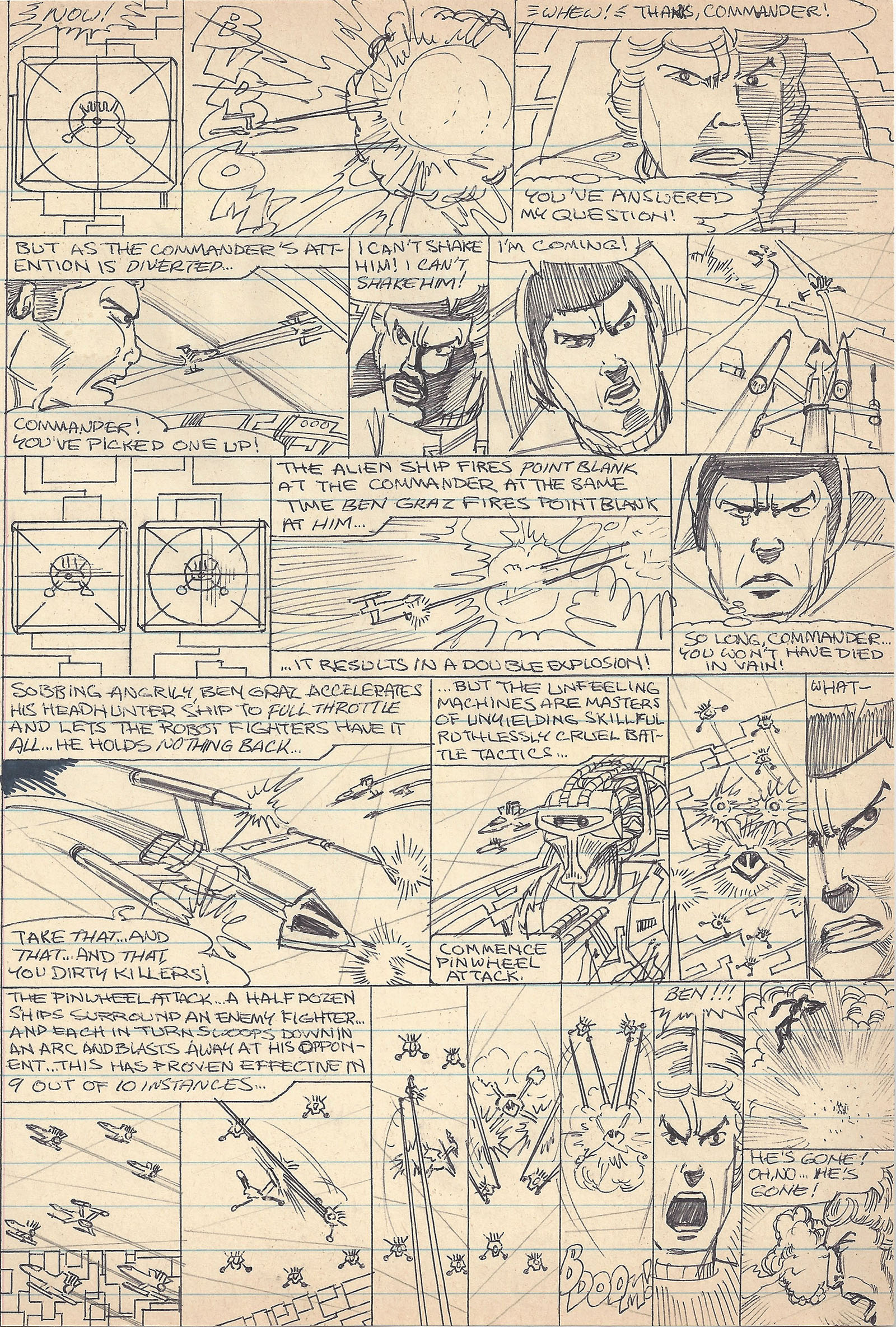 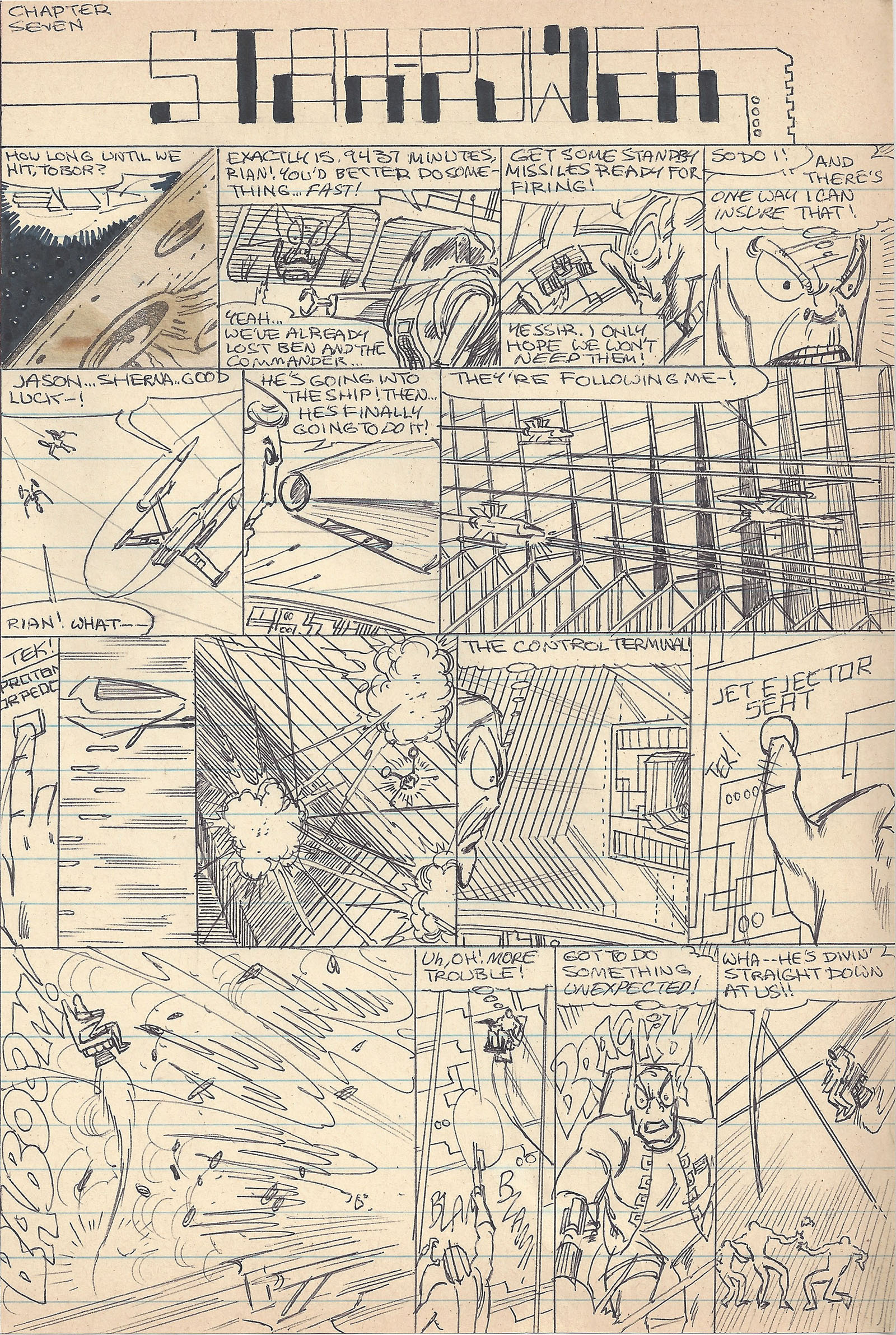 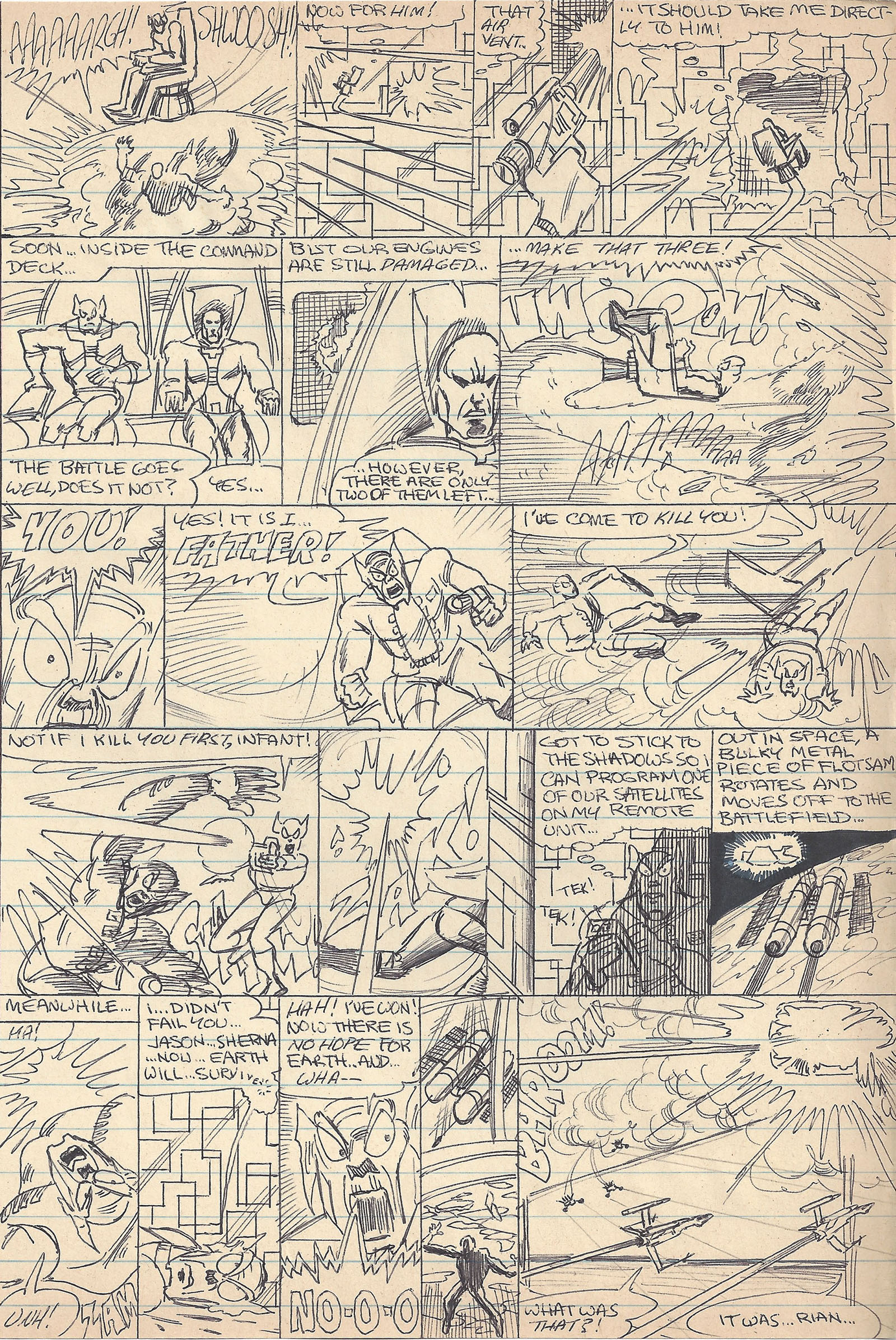 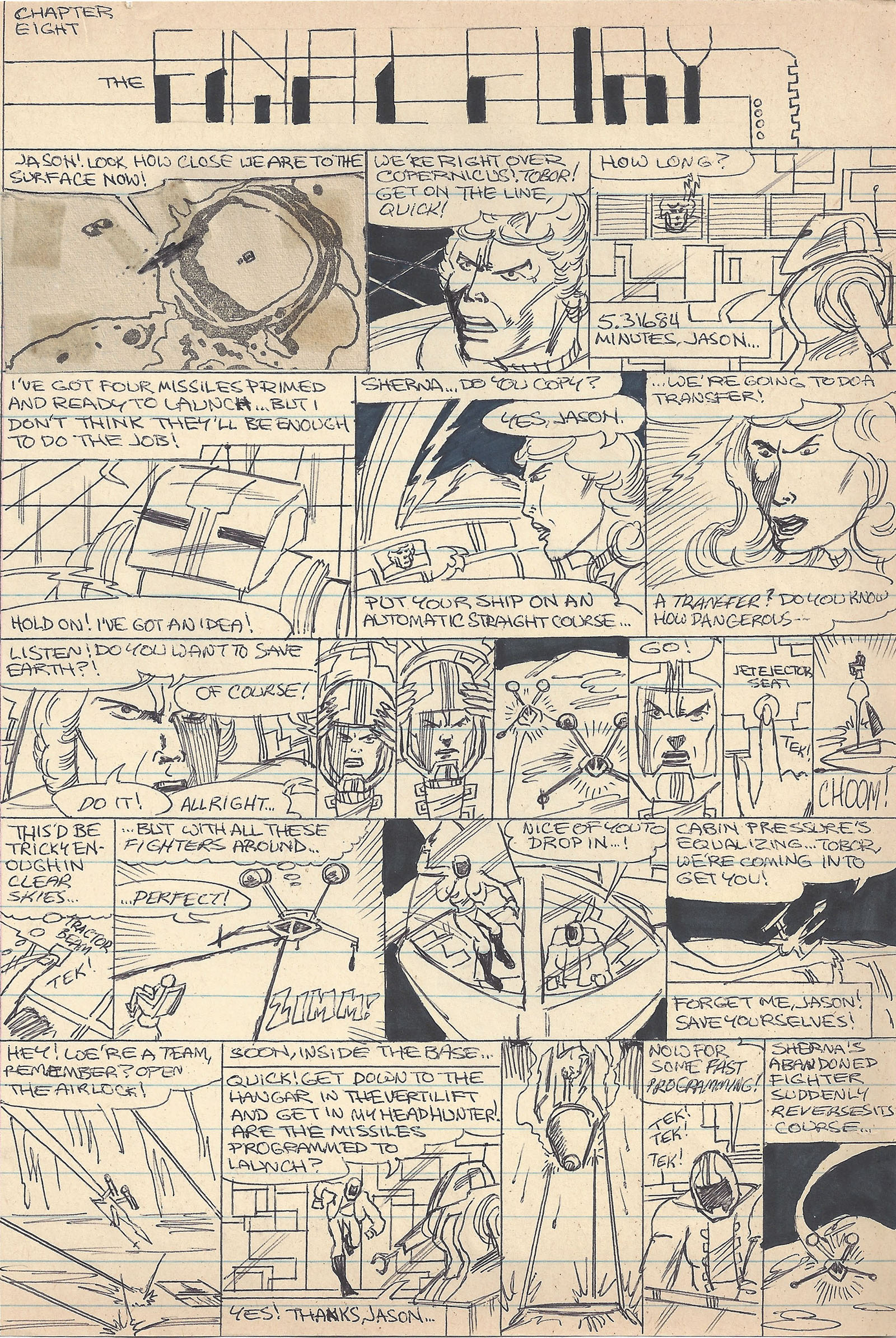 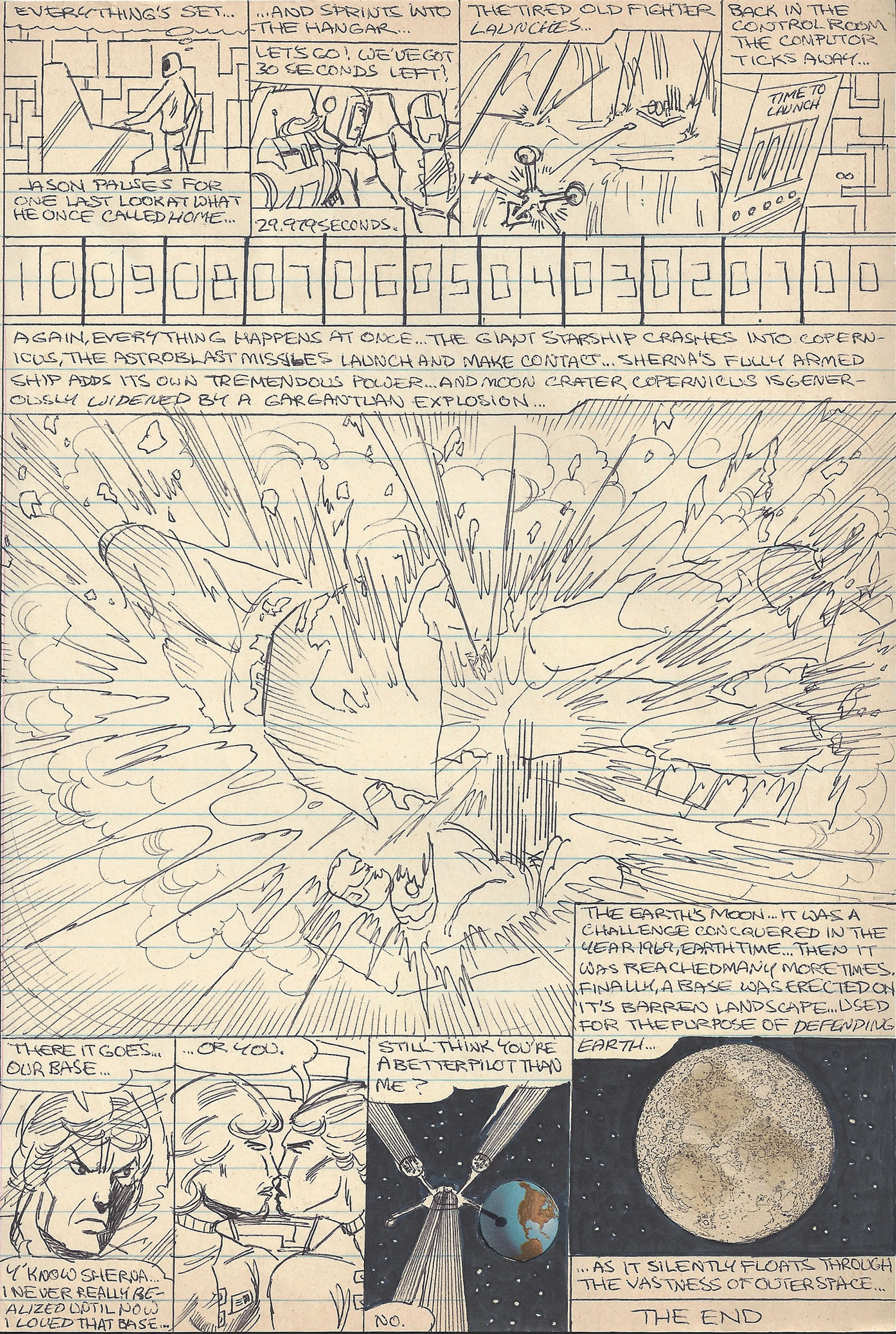