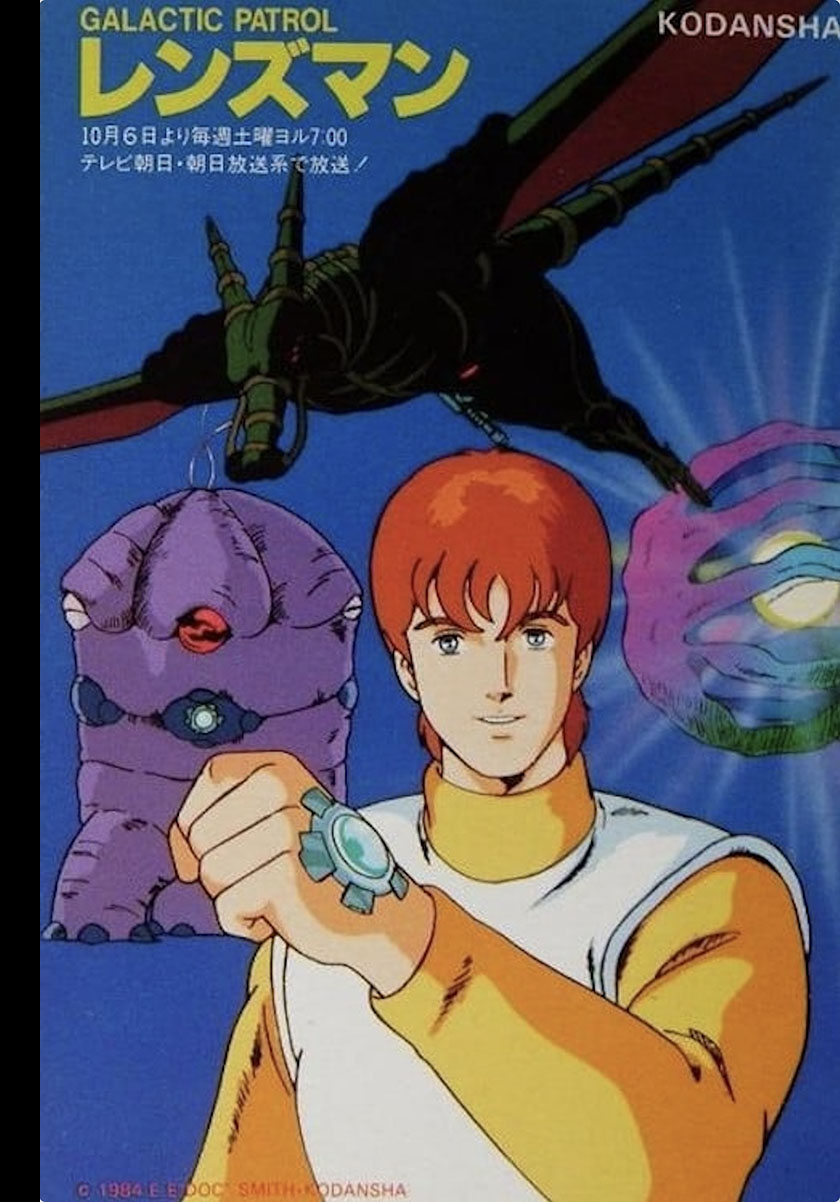 Heads up: if you haven’t done so yet, you’ll want to read about the first Lensman series here and the second here. Done? Well, that was fast.

When Eternity Comics licensed the Lensman series from Harmony Gold in 1989, their goal was to take it as far as possible. Their Robotech comics had launched in 1988 and were going great guns, so it was reasonable to assume that another anime property with a recognizable name would also do well. This assumption proved correct, at least for a while.

In Japan, the Lensman movie had premiered in July 1984, and its TV series followup premiered in October, running for 25 episodes. The plan was to adapt the movie (which we did) and if it did well enough (which it did), we would continue with the TV episodes. The tricky part was going to be merging them together, since they were separate stories that did not share continuity. That brings us to this comic series right here, War of the Galaxies.

It was helpful to know the long-range plan going in, because it allowed us to re-engineer the story from the start. When I came on board in summer 1989, Paul O’Connor was finishing up the script for issue 1, but that was fine. What I had in mind wouldn’t come into play until the end of issue 2, and when I suggested it to Paul he gave it a go. The problem we had to solve was how Kimball Kinnison would get his lens. He obtained it one way in the movie and in a different way in the first TV episode. We weren’t going to skip over the movie, because it had an anime tie-in (Streamline Pictures would release it to the US market in 1990). So how could we have Kim get his lens twice?

My solution was to make the first lens a phantom. It would appear and vanish seemingly on its own. It would be there when needed, gone when not. The theory was that he was being tested as a Lensman before officially becoming one. It brought something new to the story and gave Paul more to work with (since, let’s face it, the movie plot was paper thin). It also addressed the number one complaint among fans, that you don’t just pick up a lens. You’ve got to qualify for it. The TV story was still a wholesale departure from the original “Doc” Smith novels, but it least there Kim was given a lens in a more proper fashion. So we built toward that moment and finally got there in War of the Galaxies issue 1. 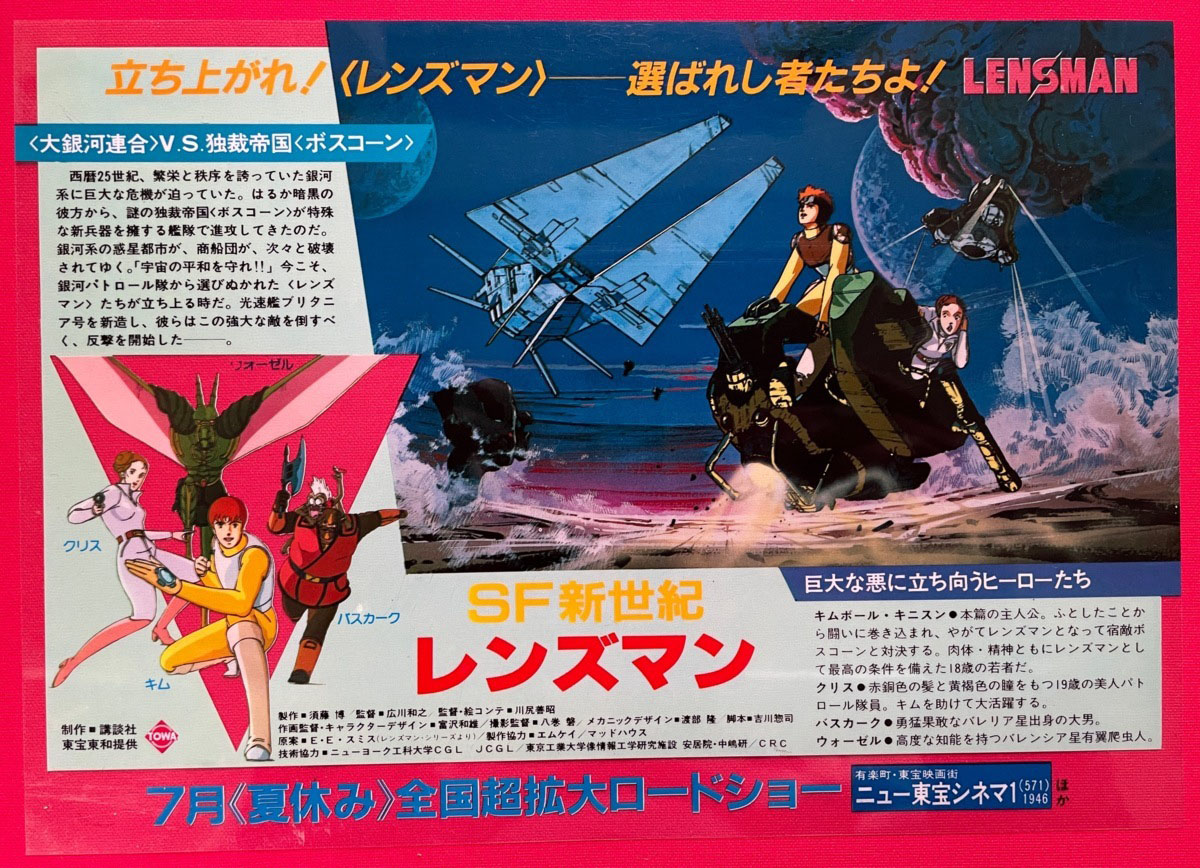 Flyer for the 1984 Lensman movie

I was highly skeptical that we would get to adapt all 25 episodes of the TV series. Properly paced, each one would take two issues to play out, and the likelihood of any b&w comic lasting 50 issues was remote. And anyway, I didn’t relish the idea of drawing Lensman for over four years straight. It was a good entry point for me, and I gave it my full effort, but there were other things I wanted to do with my career.

Either way, the initial commitment was for six issues, same as the movie. In December ’89 the orders came in for Secret of the Lens #1 (first issue of the movie adaptation) and they scored high enough to give us the GO signal. At that time I was still drawing the later issues of that series and Galactic Patrol, but as soon as I finished them in mid-March 1990, I rolled right into War of the Galaxies #1 without skipping a beat. Paul O’Connor was less excited than I was. He’d originally wanted to move on after the movie adaptation was done, but stuck around instead. He was flexible and easy to work with, so that was fine with me.

One by one, the individual issues of Secret of the Lens and Galactic Patrol rolled out in 1990 while I penciled the new series. Before starting, I’d collected all the reference materials that were available; model kits, articles in anime magazines and the TV episodes on VHS. They were multi-generation copies of Japanese TV broadcasts, mediocre quality with no subtitles, but that’s how it was back then. If you wanted to see the stuff, you had to put up with the obstacles. Even today, the Lensman TV series is hard to get since only six episodes were released commercially in Japan, and four in the west. For all the rest, the world remains stuck with aging TV recordings.

It’s worth mentioning that I was still within my first year as a working professional, and already starting on my fourth project. It alternated on the calendar with my fifth, Shatterpoint, and my sixth, an original series titled Chaser Platoon. So for the spring and summer of 1990, I was drawing three comics a month and I set a personal record by penciling 100 pages during a single 4-week period. Haven’t beaten it since. Don’t really want to. 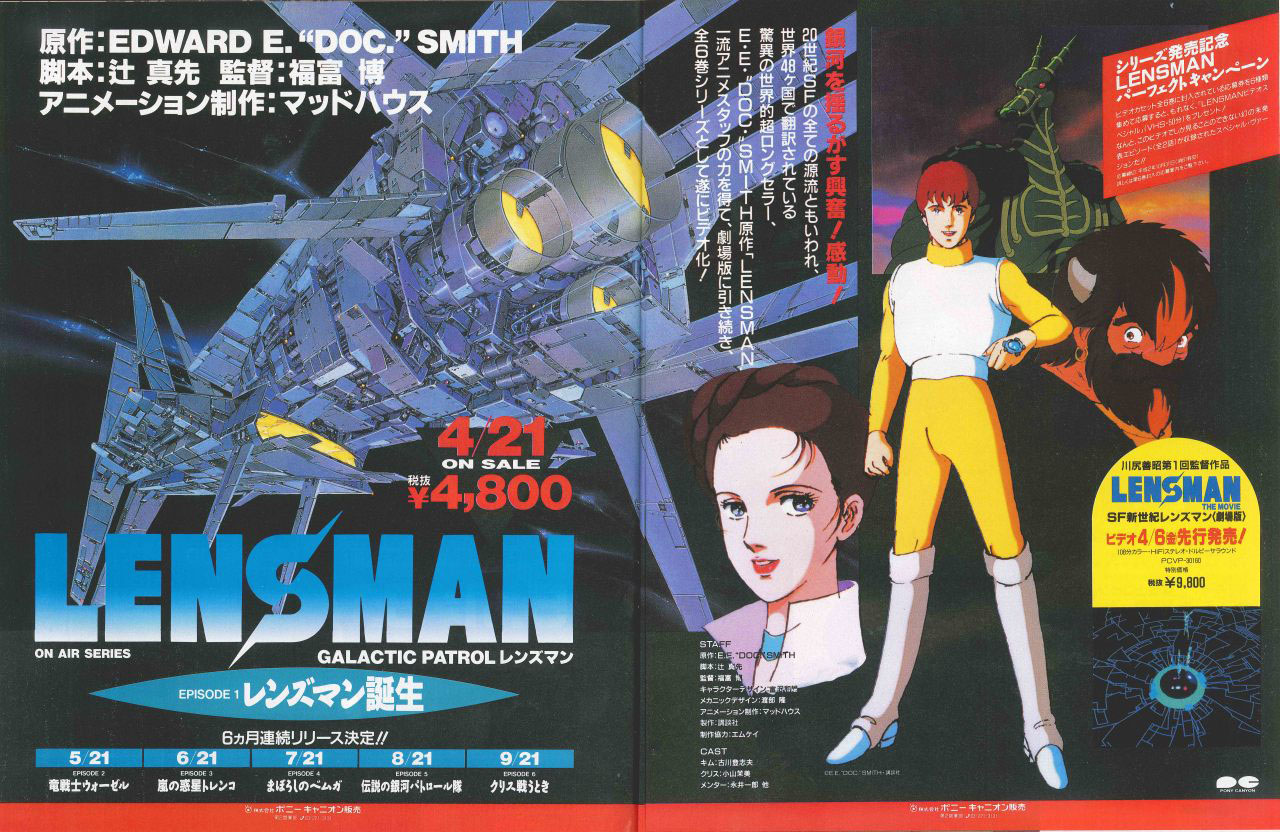 Magazine ad for the TV series on home video

Ken Branch, who had done stellar inking work on Galactic Patrol, came on board again for War of the Galaxies, but only did the first two issues before he graduated to bigger things. I knew it was only a matter of time. Eternity paid very little for inking, offering royalties as compensation. This made inking into an entry-level position for people without much experience. As soon as they proved themselves, they qualified for better-paying gigs with bigger publishers and hit the road (understandably so). A “temp” inker stepped in for issue 3, and then a new guy by the name of Mark Stegbauer jumped in for the rest of the series. Mark and I would later work on a 4-issue Fathom miniseries for Comico.

By the time I got to War of the Galaxies #6 in June, sales on Secret of the Lens had dropped and it was decided that we wouldn’t renew the series. But issue 6 only got halfway through TV episode 3 and it was bad form to leave it unresolved, so we got approved to wrap it up with one more “bonus” issue. Paul O’Connor finally had enough, so he stepped aside and turned the writing duties over to me. Thus I got to both write and draw the finale, and it felt like the right place to stop.

Thus, Lensman was over before the first issue of War of the Galaxies even shipped. It came out in October, by which time I was already on to new projects. The publishing schedule was a strange one. Issue 2 came out three months after issue 1, then there was a two month gap between 2 and 3. From there on, it went monthly. I don’t remember exactly why this happened, but it was most likely due to Ken’s inking running behind schedule. He probably had better-paying jobs competing for his time, and these things happen.

Presented here are all seven issues exactly as published. I no longer have any original art (other than my design sketches), so I was limited to scanning the comics themselves. But now you don’t have to track any of them down. You’re welcome! 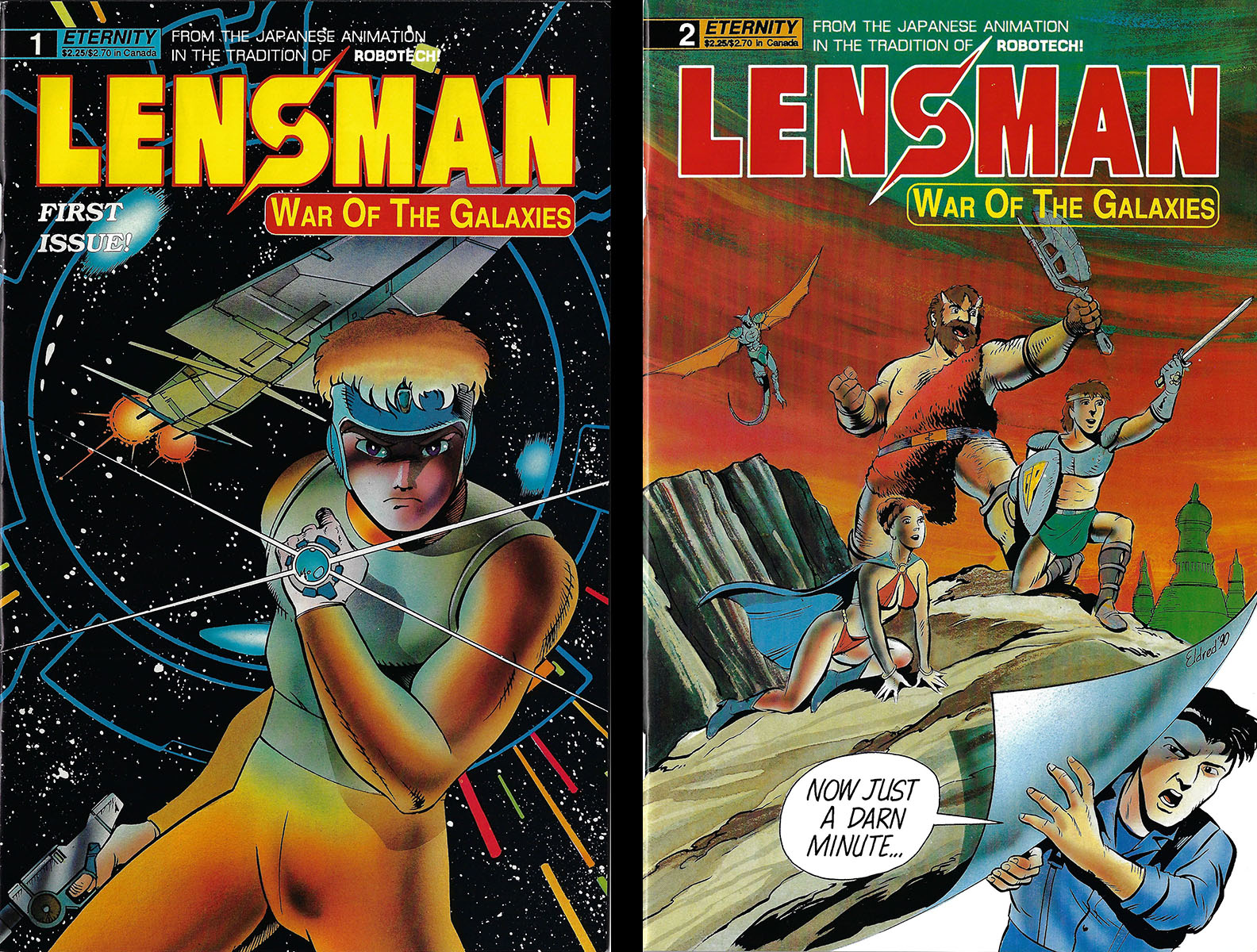 Issue 1: Birth of a Lensman

I mentioned above that it would take two issues to adapt a TV episode, but since we had extra story to wrangle (due to our transition from the movie), this one would require three. That decision wound up giving us our “bonus” issue at the end, so it worked out well.

Double-page spreads are always a luxury in a comic book, so when we saw a good opportunity for one, we grabbed it. You’ll find one in this issue. I loved them, because they saved me a lot of work. I wrote an introduction for the series (a “Lensitorial”), but for some dumb reason it appeared in this issue instead of #1. 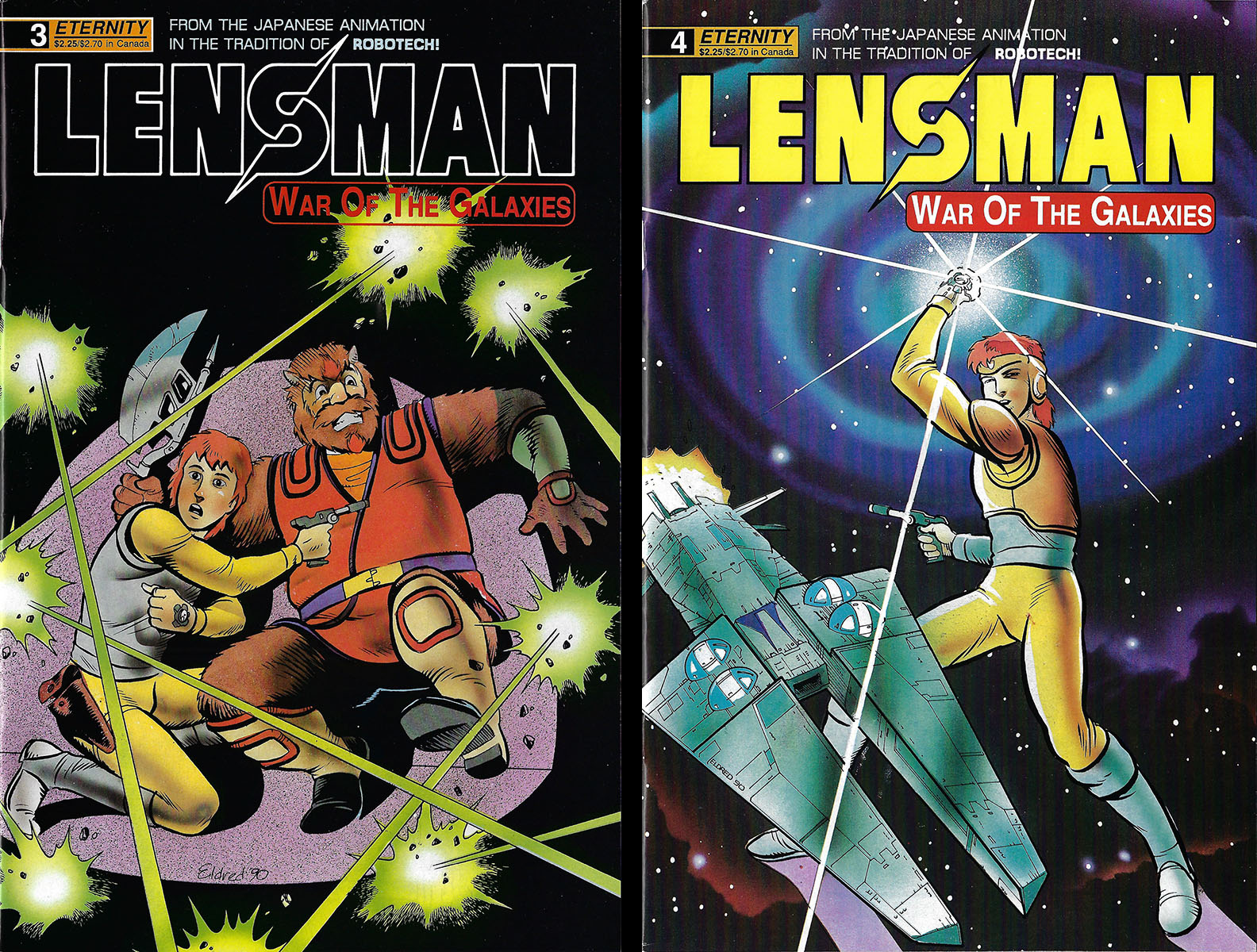 The inker on this issue was our “temp” until we could find a permanent replacement for Ken Branch. I was not happy with the results, which looked rushed and unfinished. I don’t know how much time the inker was given, so it might have been the best he could manage. And a new letterer took over with a larger-than-usual font size. So…not my favorite issue.

the inking problems went away once we got Mark on the team. He kept the book on schedule and did good work. Most importantly, he got what I was going for with the penciling and stuck to it. Some thicker line work here and there would have helped define depth and contours, but we both still had a lot to learn. 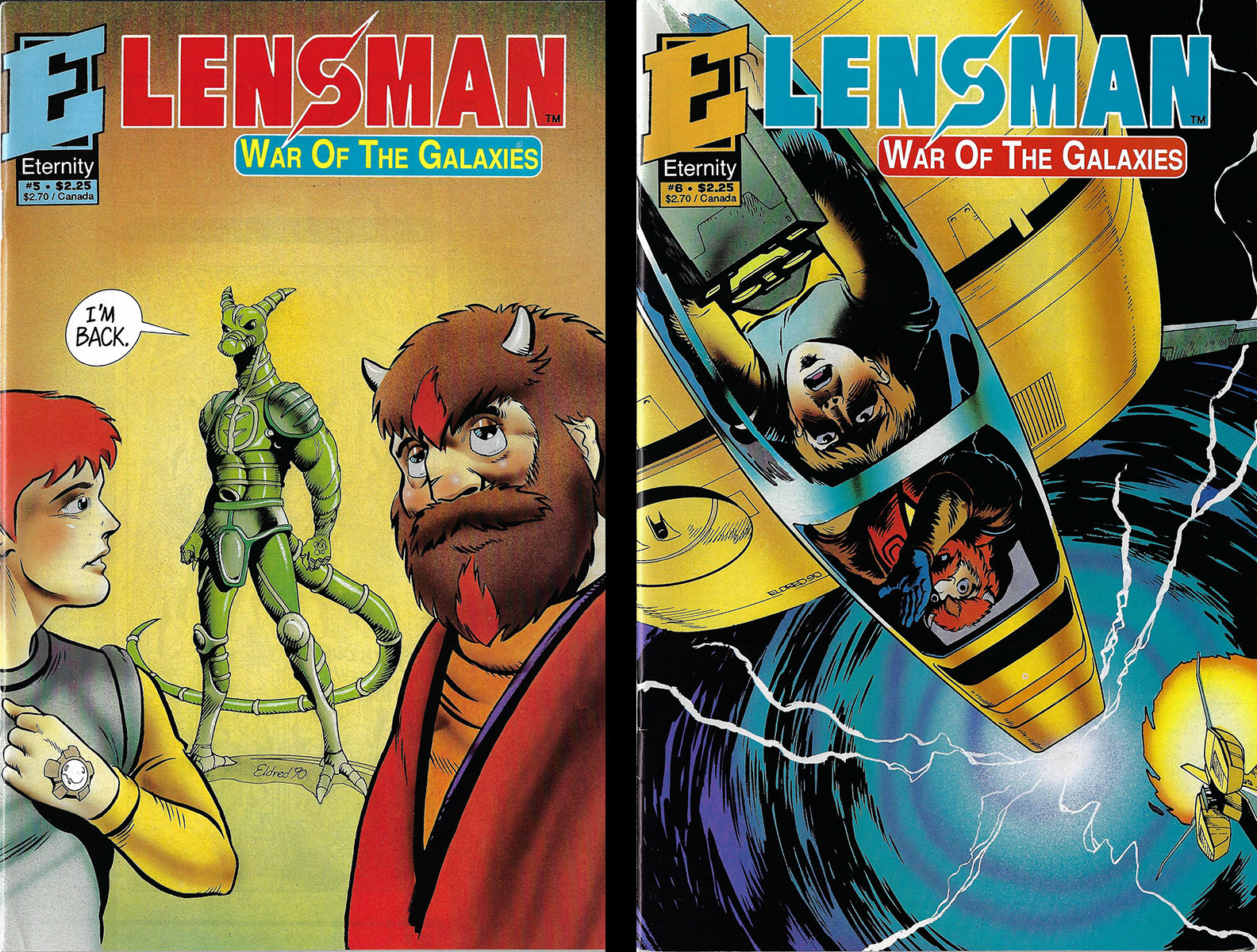 Dense backgrounds and a huge increase in character count made this the hardest issue to draw. And Worsel is a really cool character with an interesting design, but not when you have to draw an army of him. This brought us to the end of TV episode 2.

The Cycroader was my favorite mecha design from the anime, and I had the model kit in my collection, so I relished the chance to put two of them into action in this story. And freeform cloud/ocean backgrounds are always a LOT easier to draw than anything with architecture, so it was a breeze to draw after issue 5. 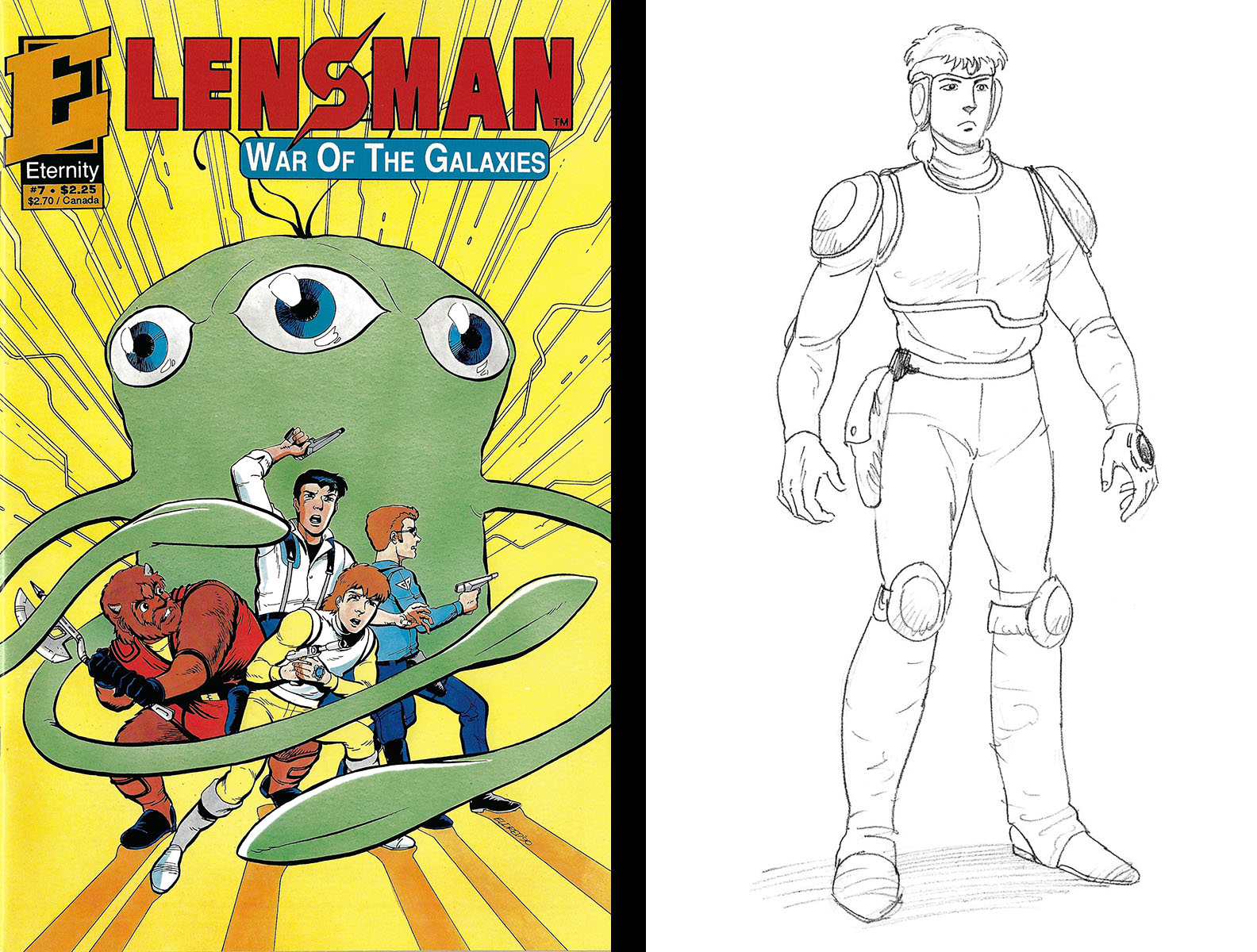 My favorite Eternity letterer Clem Robbins returned for the finale, and I was overjoyed to see his fine work again. The best part was getting to write the 4-page epilogue, which offered some emotional closure and a satisfying conclusion to what we started. I would draw it better these days, but nothing else needs improving.

Here’s a handful of reference I sketched out for myself, including a handful of things left over from the movie adaptation and all the stuff I had to draw off my TV screen from a ratty VHS tape. There weren’t any art or design books available from Japan (none were ever published for the series), so D.I.Y. was my only option.

BONUS: All the Lensman TV episodes released on home video in Japan (1-6 on VHS, Laserdisc not shown). Each half hour episode retailed for about 50 bucks, which may explain why they stopped at six. 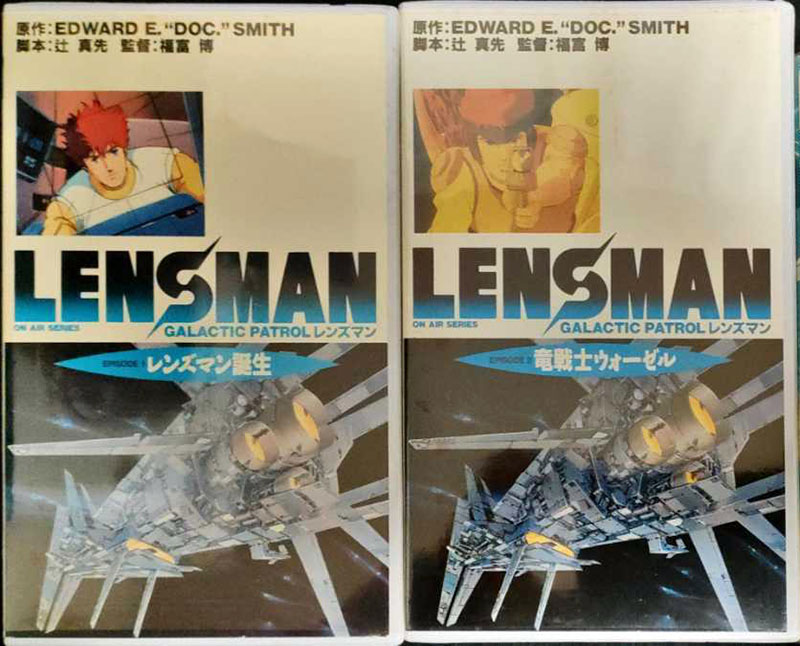 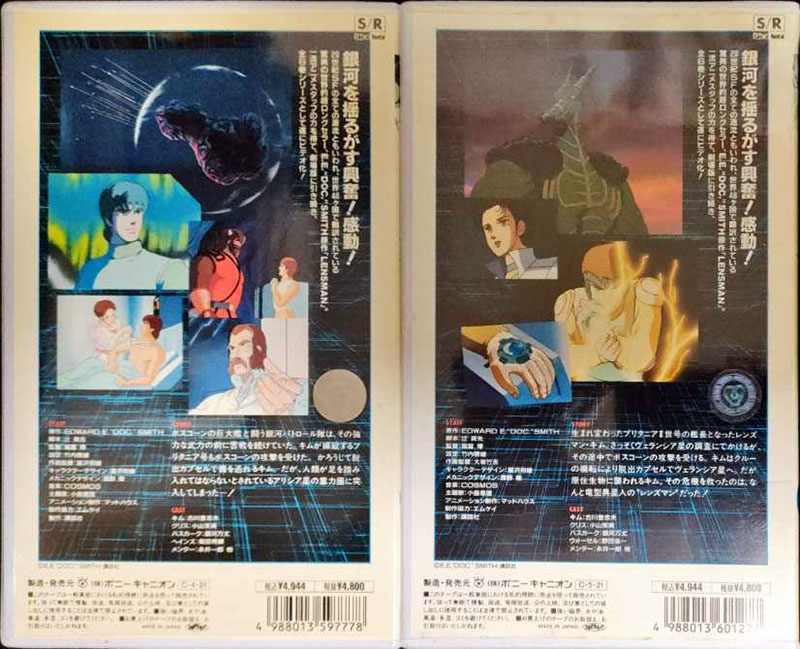 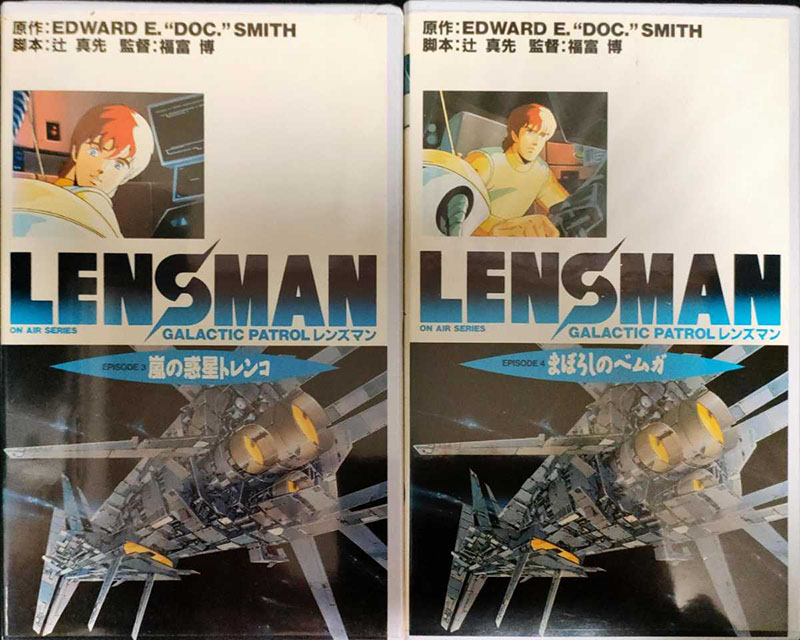 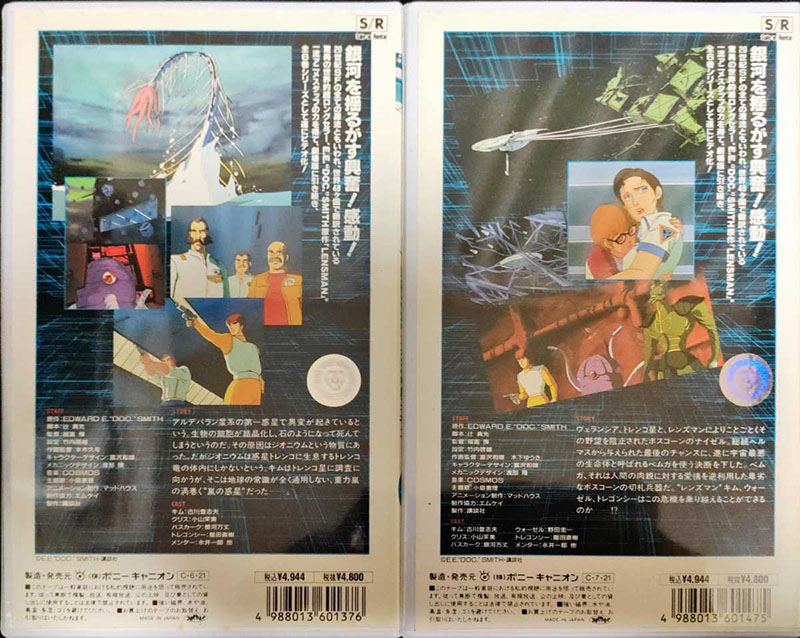 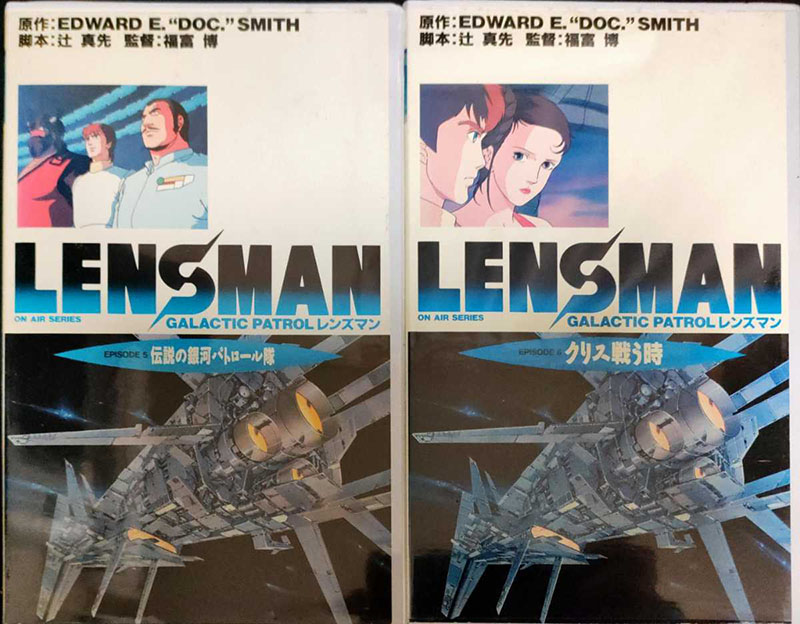 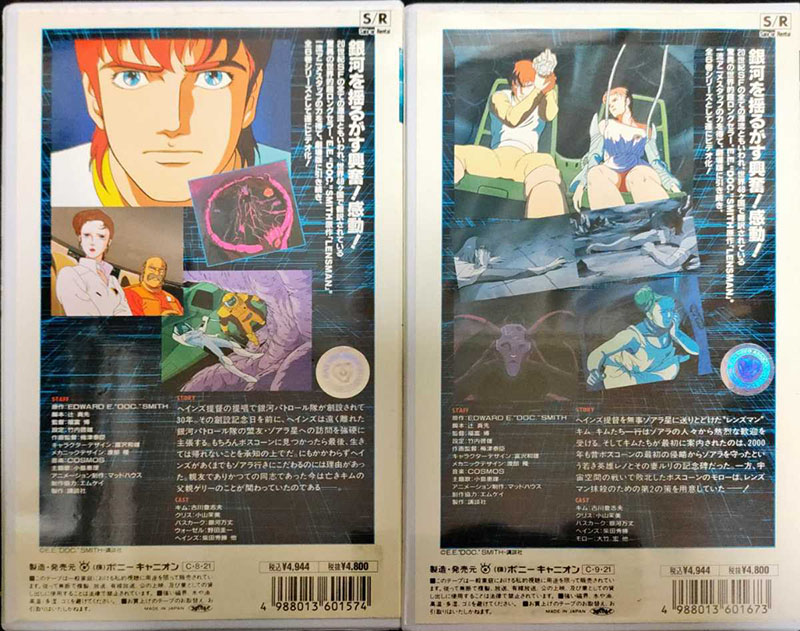 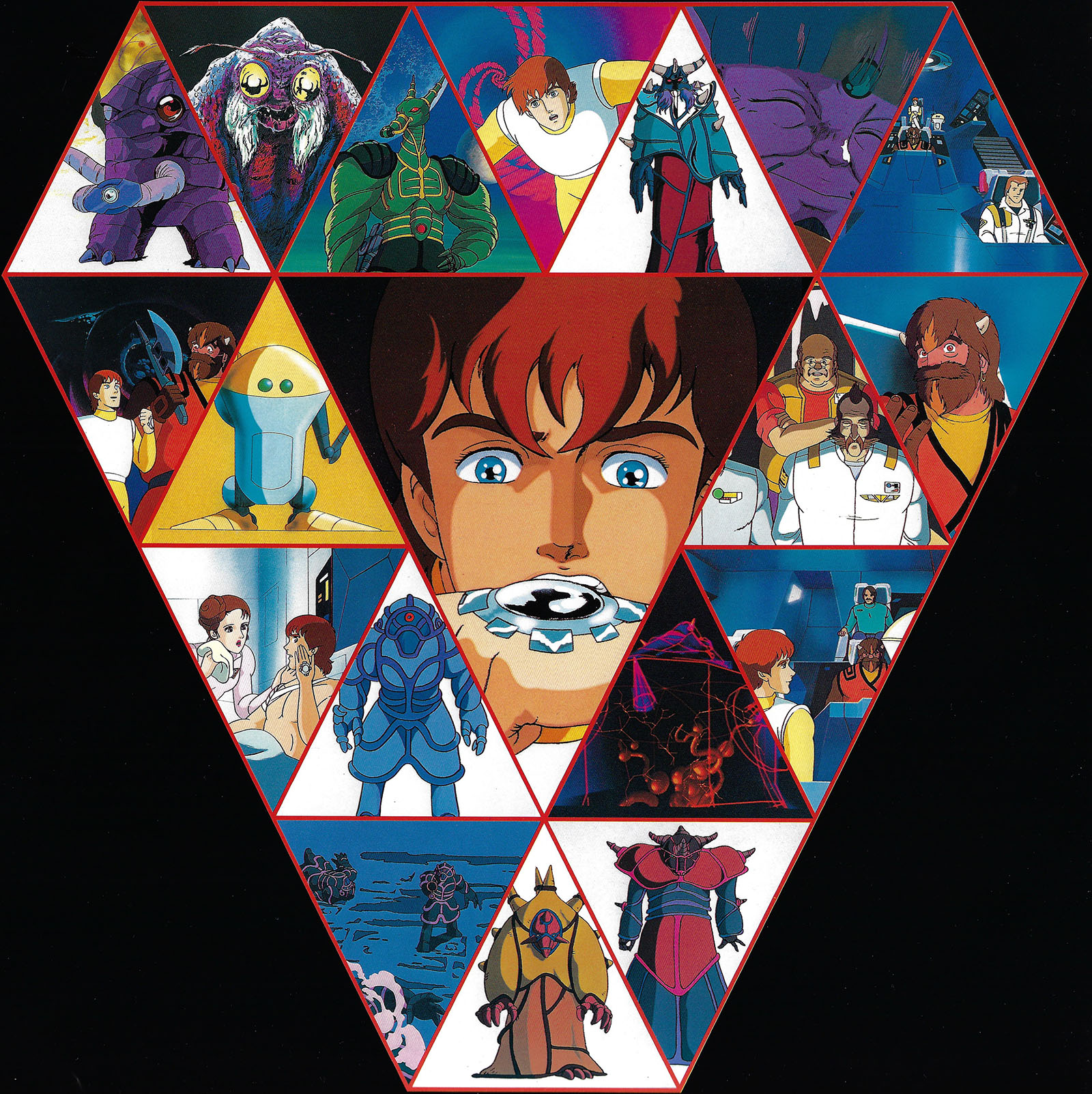