I wish every one of my comics had gone as well as this one. The editor agreed to it right away, I got to write and draw all of it without interference, every issue got published, and – amazingly – I got one of the best inkers I could ever ask for. 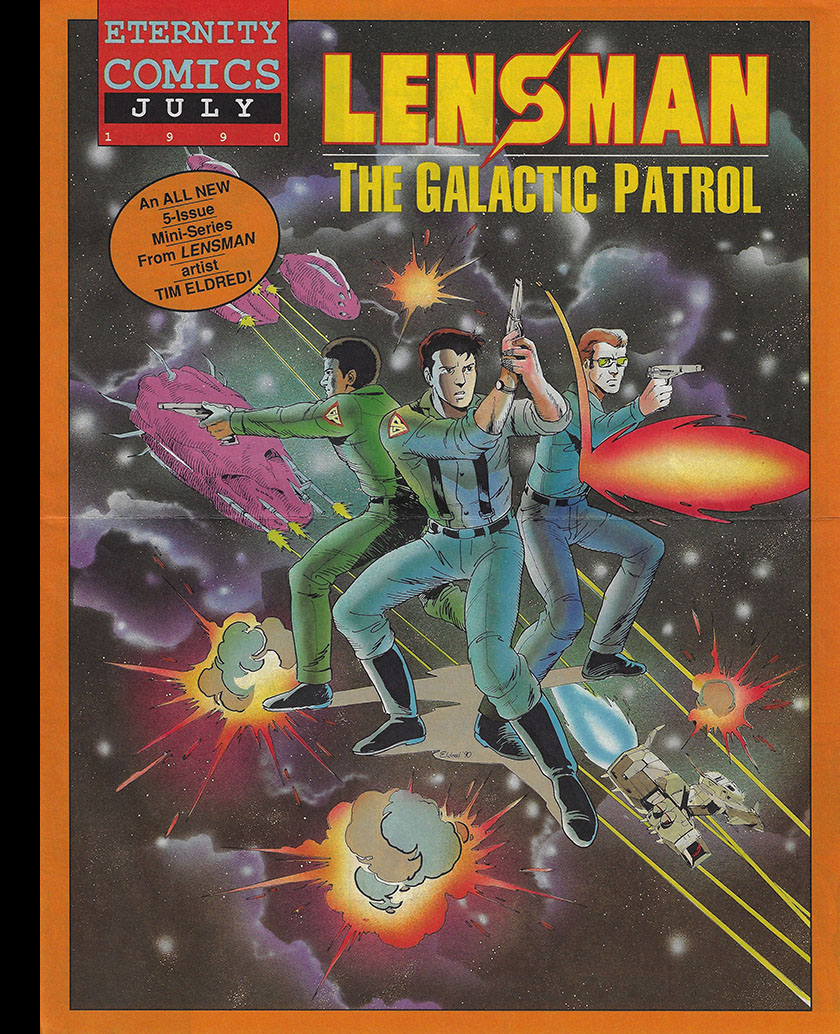 Things moved quickly once I got the green light from Malibu Editor Chris Ulm (described in the previous Lensman article). I had less than a month to develop the story up to the point where I could start drawing. It was going to spin directly out of Lensman #3, so backstory and a starting point were already provided. I also had a finishing point; the GP agents would reunite with the rest of the characters right before a grand space battle in Lensman #6.

At first I thought four issues would contain it, but along the way I decided five would be better. Then both stories could end (from different points of view) simultaneously. The grand battle would be even grander. No problem selling the editor on that, either. Very seldom would I experience that kind of ready acceptance in the comic book world.

This was still a time before I wrote scripts. Ever since I was a kid, my approach was always to just start writing and drawing simultaneously. It worked here, too. Once I got the story outline nailed down, I dove in. Generating a script for myself seemed like an unnecessary step that would just take up more time. And to be fair, I wasn’t exactly writing Shakespeare. It was a pretty basic A to B to C plot and I would work on the characterization along the way. If I did my job right, it would fall into place.

Plus, not writing a script in advance preserved some spontaneity. The plot mechanics were pre-set, but the individual scenes could sort of direct themselves. That kept it fun for me, since I didn’t know all the details in advance. These days it’s very different. I’m all about getting every word exactly right before the drawing starts, and the writing phase is where the discovery happens. And, more to the point, the stories I write today are WAY more complex than this one.

In fact, the only struggle I had on this project (if you could even call it that) was convincing the editor to make part of the first issue a reprint. Since it was a crossover with Lensman #3, I wanted to reuse six pages from Lensman #3 to make it crystal clear. The editor was against it, since that would represent almost a quarter of the issue and might leave readers feeling suckered. That view had merit, but the alternative was for me to redraw all six pages for a new inker, which seemed really dumb. Somehow, I prevailed. The results were quite interesting. 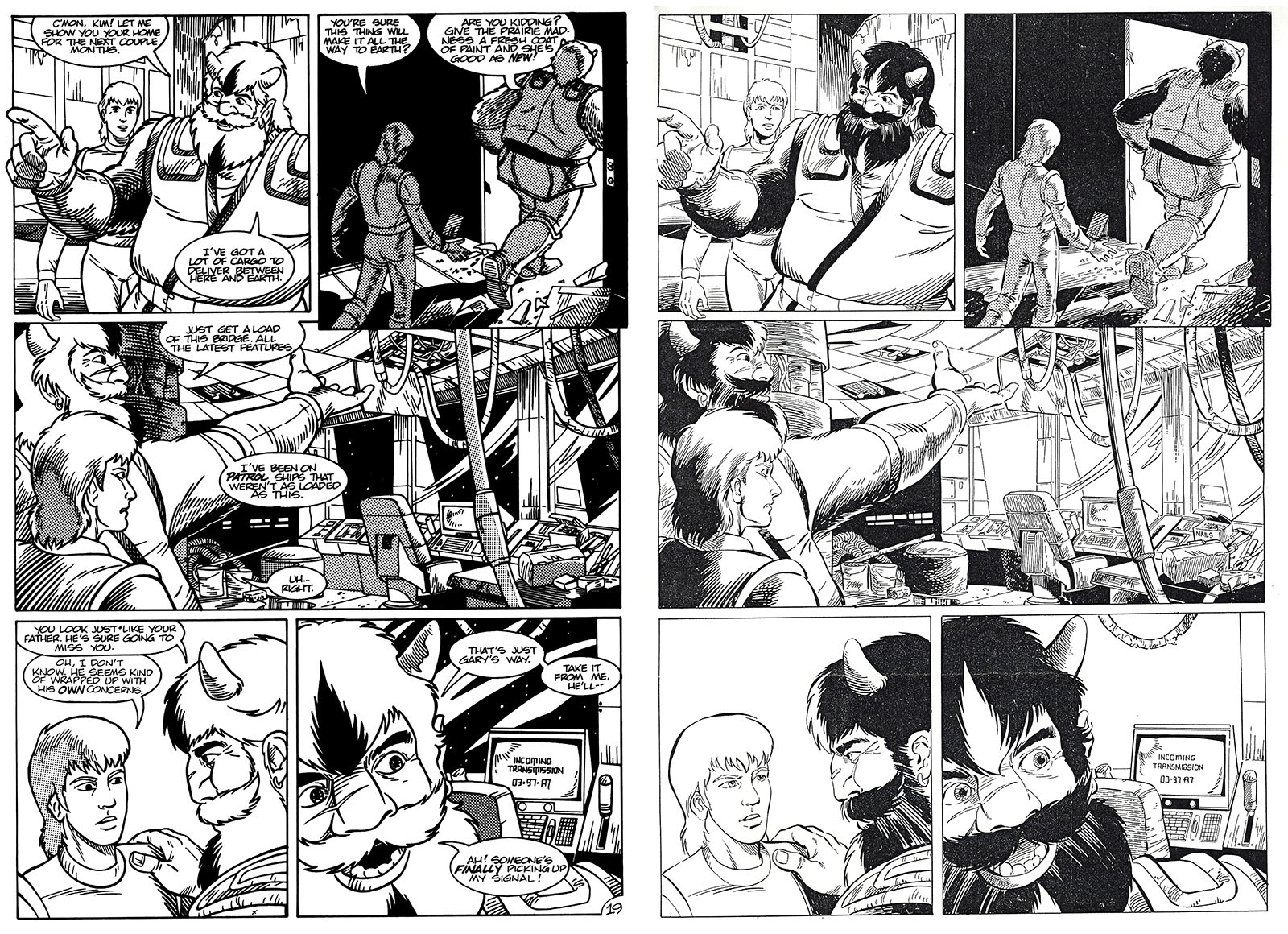 As explained in my Lensman article, the inker on that series was Paul Young. He wasn’t fast enough to handle a second book every month, so the inker for Galactic Patrol would be a relative newcomer named Ken Branch. The editor sent me a one-page tryout sample of his work and it looked pretty good so I approved. (Paul’s version above left, Ken’s above right.)

The first page of GP #1 was a new one to precede the reprinted pages, so we had Paul ink that one. This meant that Ken’s work began with page 8. And lemme tell ya, when Ken took over, you NOTICED. 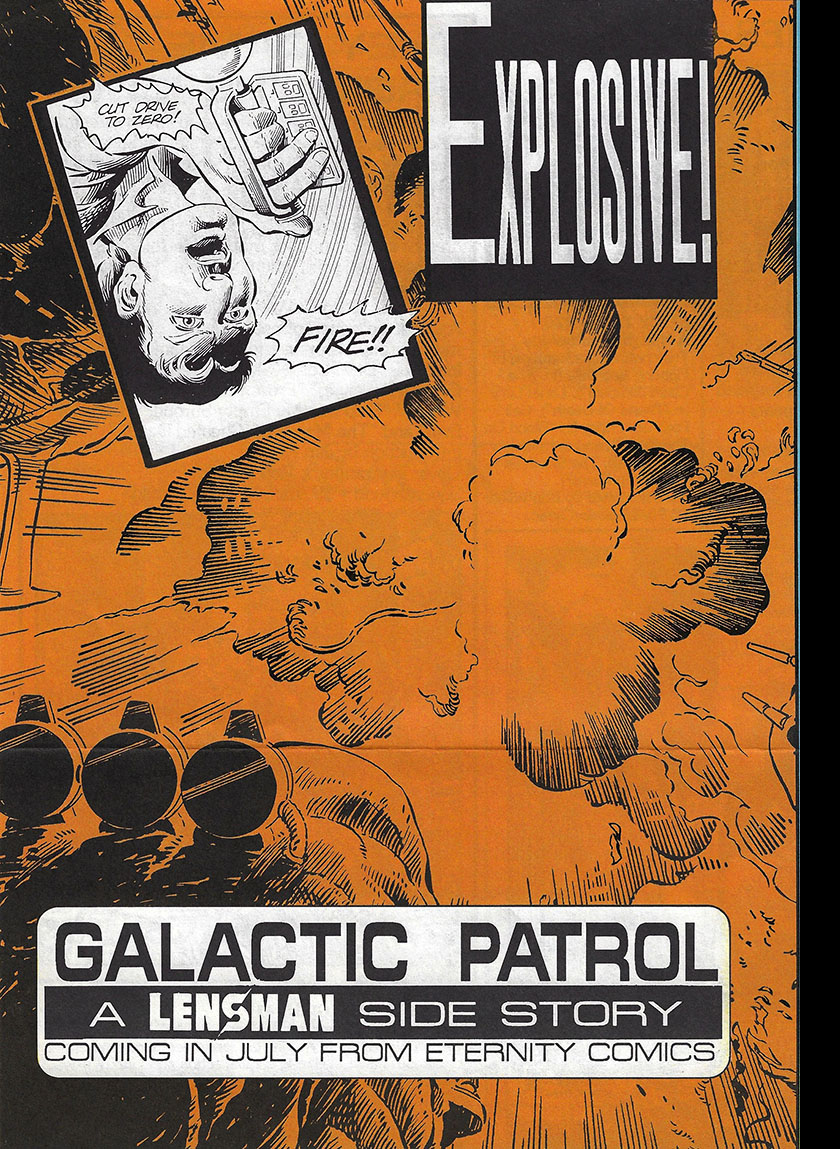 (Side note: ironically, Paul Young was indicated as the inker in the credits box on page 8, because the letterer did his work before Ken was officially hired. So Ken’s name was inadvertantly left off of the first page he inked. Sloppy and strange, but not uncommon for Malibu at that time.)

My chief gripe against Paul’s inking was that he didn’t vary his line from one thing to the next. He only used pens, so his lines were all about the same thickness. That technique gave everything on the page the same weight and density.

Ken, by contrast, used pens and brushes in combination to prevent this very problem. There are three basic inking rules that drive this approach. (1) Organic objects (people and plants) should be drawn with an organic tool – a brush. (2) Mechanical objects (props and structures) should be drawn with a mechanical tool – a pen. (3) Thicker lines define closer objects, thinner lines define distant objects. Following these rules creates depth and contrast, setting visual cues for a reader.

Ken’s results were stunning. I still remember how amazed I was the first time I saw his work overlaid on mine. Everything I put on the page was improved rather than compromised. Ken innately understood what was in my head and took it from there. You’ll see it for yourself when you look at issue 1. It’s so good I don’t even feel the need to post my penciled pages for comparison.

Ken is still active and doing even better work than he did then. See his website here.

The next Lensman project after this one was War of the Galaxies, our adaptation of the TV anime series, which lasted seven issues (to be posted here at a future date). The TV series rebooted the story rather than picking it up from the movie, but our comic version merged the two. One of the new TV characters was a fresh GP cadet named Tarron Thomas. I figured I could smooth out his entry by giving him an older brother in this story. I hadn’t really planned on this older brother becoming the real hero of Galactic Patrol, but that’s what happened. A direct result of the spontaneity I described earlier.

And that is enough description from me. Here’s the good stuff. 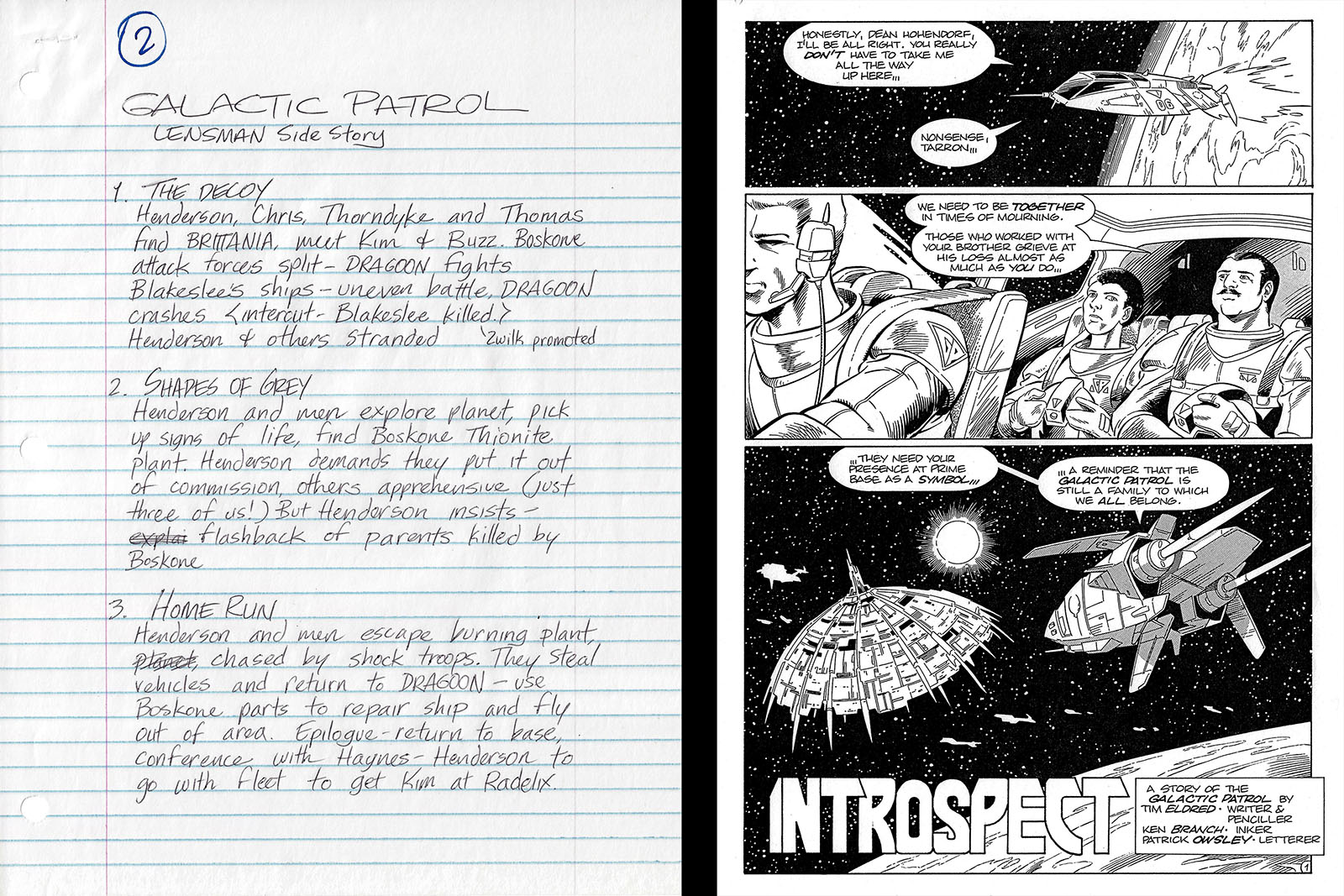 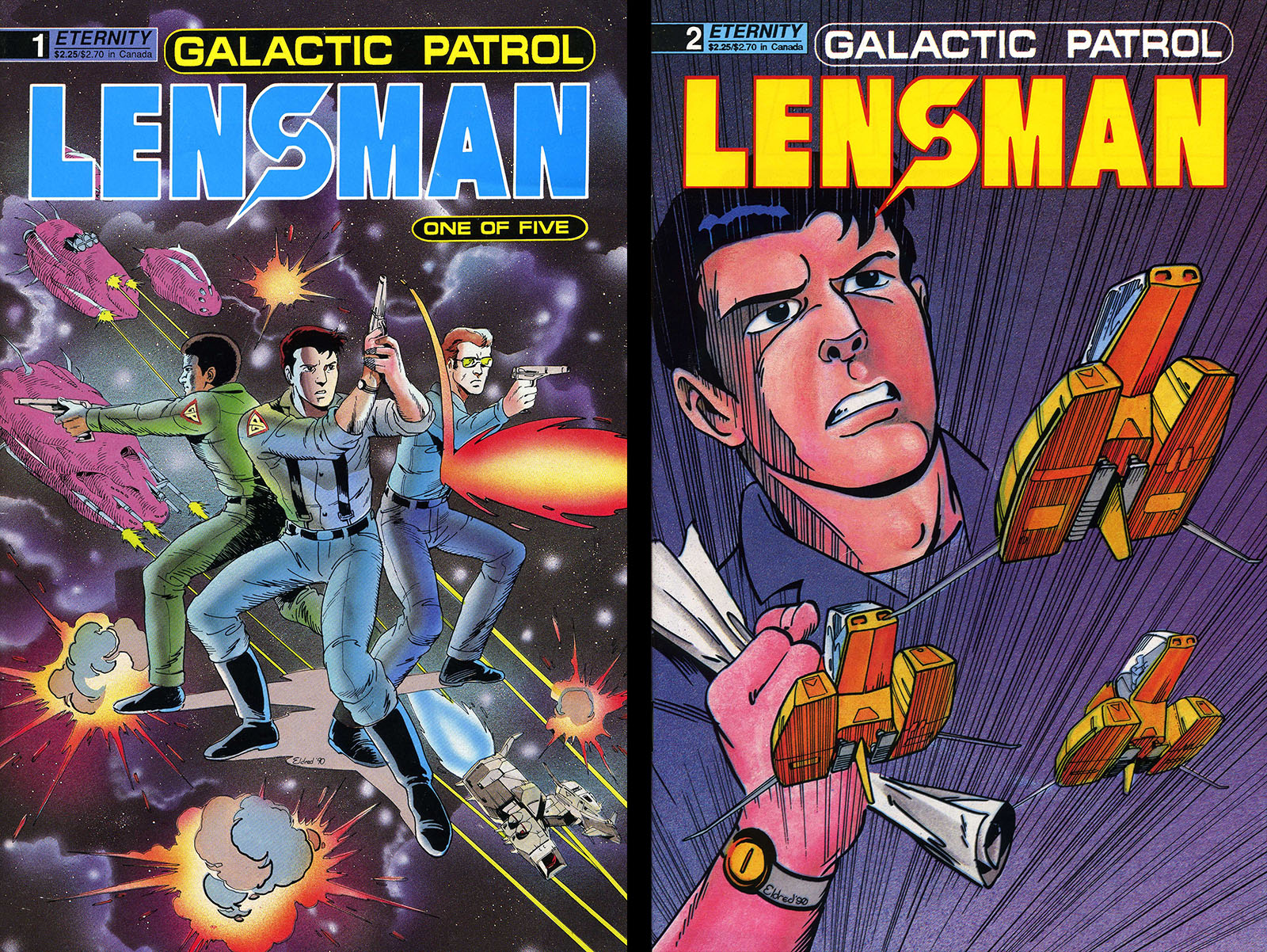 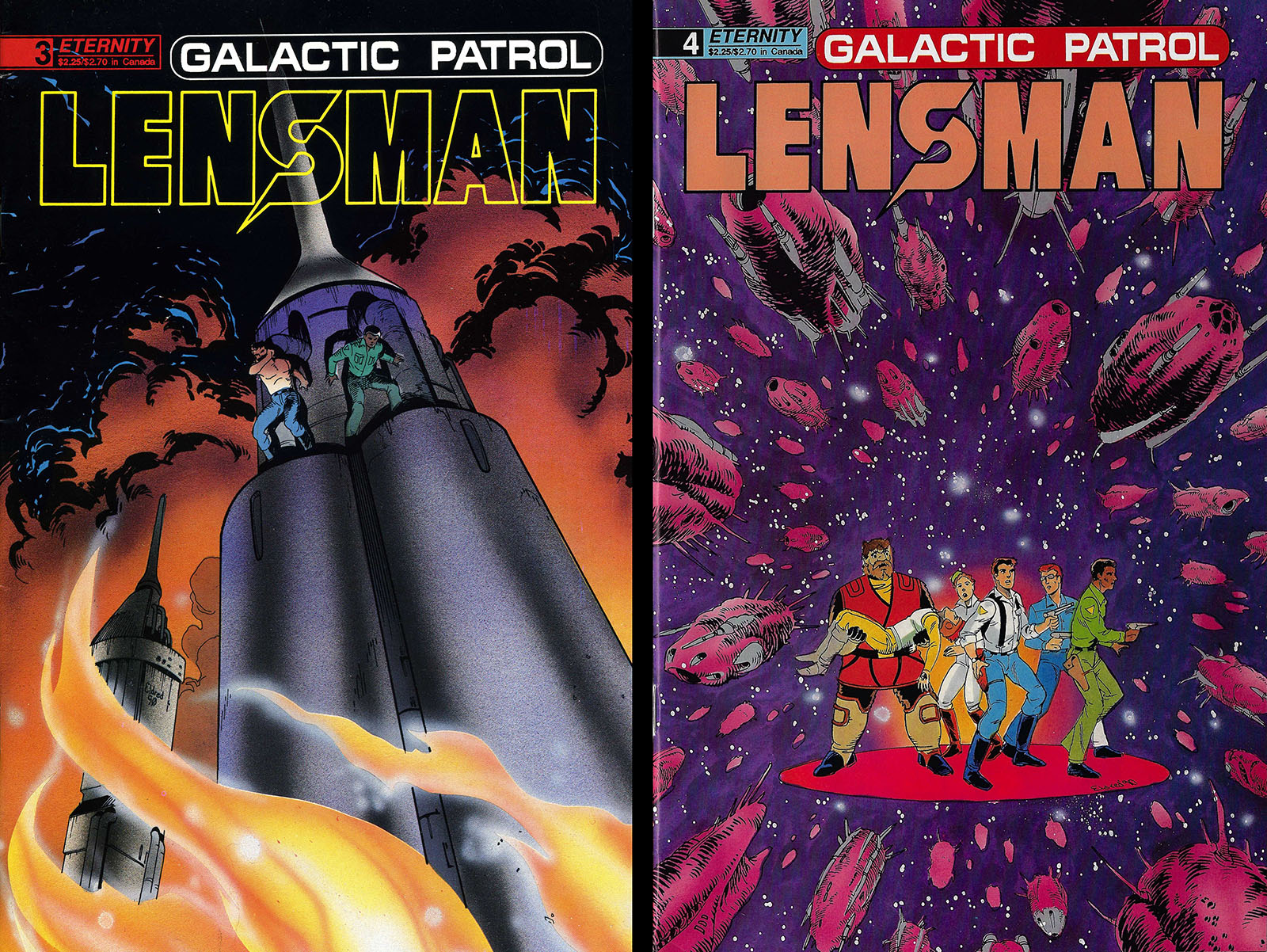 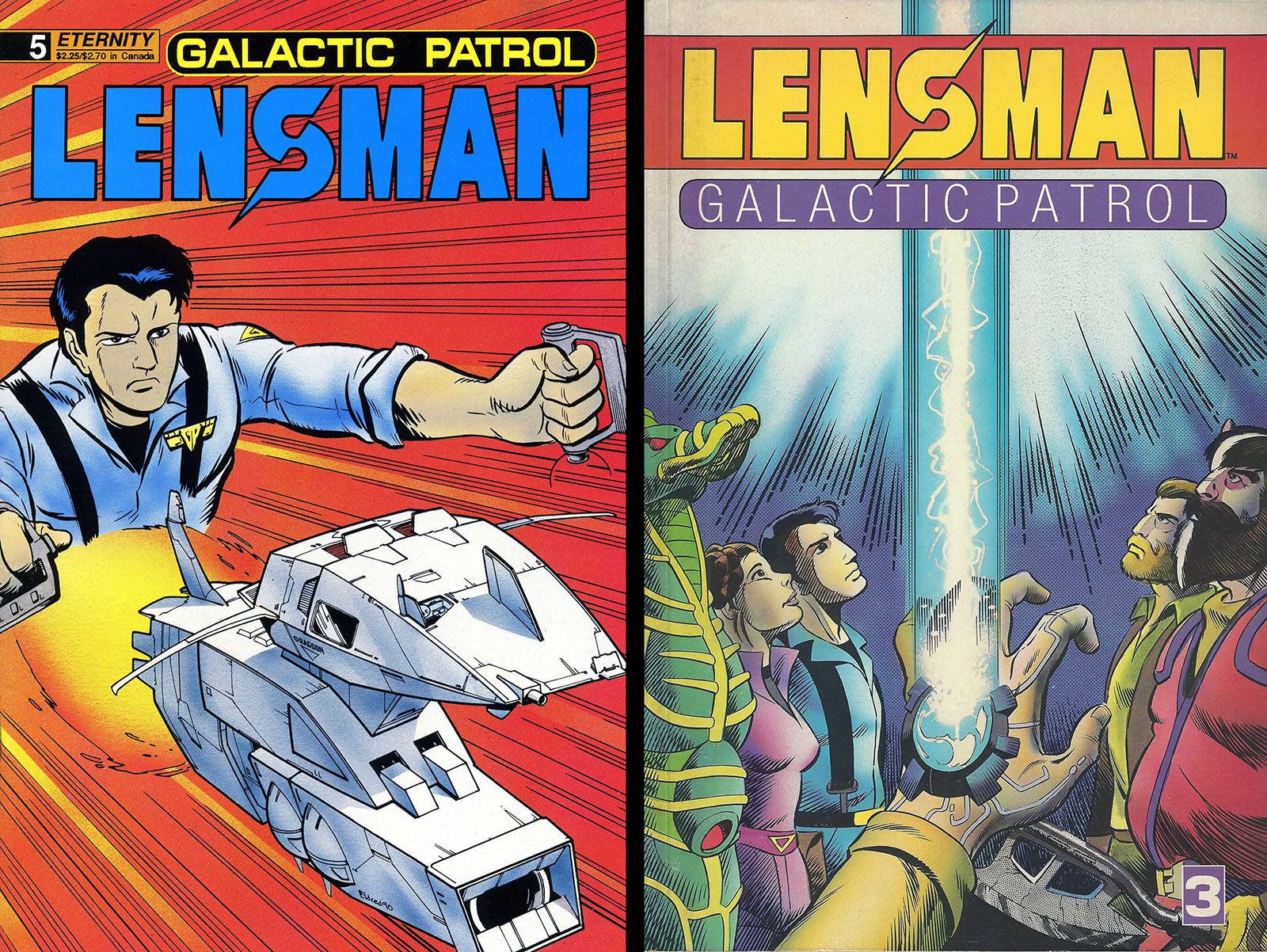 All five issues, 1991
Prologue not included for some dumb reason

Postscript #1: Right after I put this article together, I reconnected with Ken Branch (on Facebook) and invited him to contribute a comment if the spirit moved him. And here it is!

This I believe was my first ongoing gig. A little intimidating at first but that quickly ended. Tim’s pencils were ultra clean and precise. The only thing that it didn’t have was line weight. Which realistically is my job. I found almost immediately that I really enjoyed the responsibility of adding my “style” over Tim’s. And not to freak out Tim, but as I said this was my first gig. So I was learning on the fly, looking at various other inkers and incorporating it into my inks. Experimenting! I really enjoyed working on this project and boy did I learn a lot. I still own many of the cooler pages I got back. I can still see the learning, growth and confidence on many of the pages. Fun stuff and great memories. Malibu didn’t pay well then. But it was the chance to learn. So my “night shift” would soon become my day job. And this is where it all began!

Postscript #2: some time after issue 1 was published, my editor sent me this review. I didn’t keep a record of who wrote it or where it came from, but it perfectly summed up what was so interesting about seeing two different inking styles in one book. Including it here for enlightenment purposes… 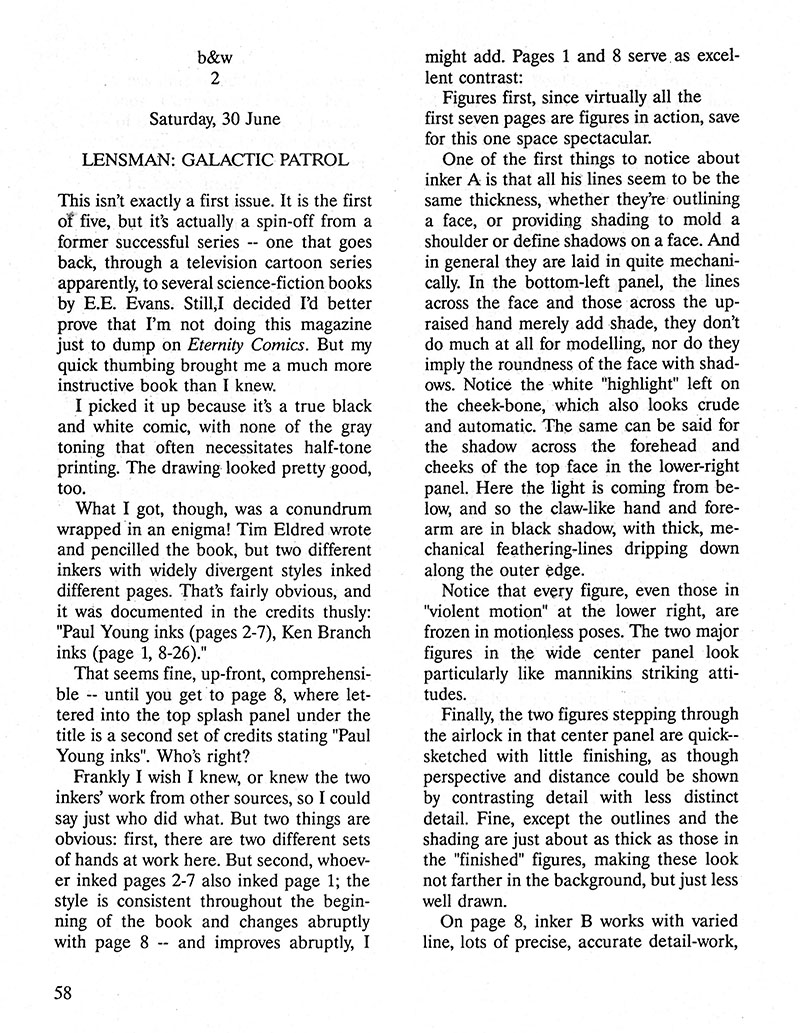 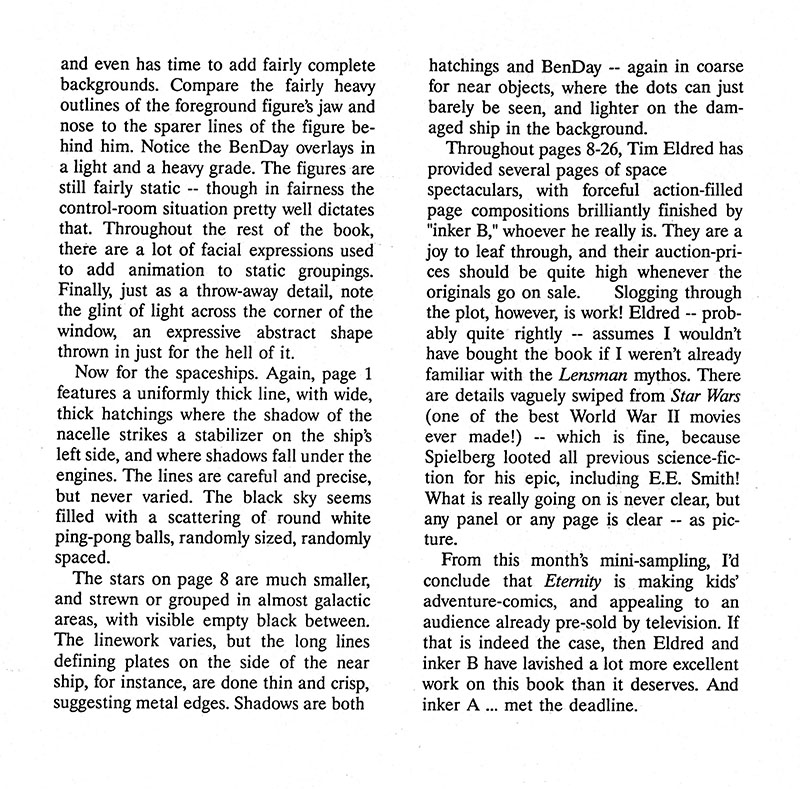