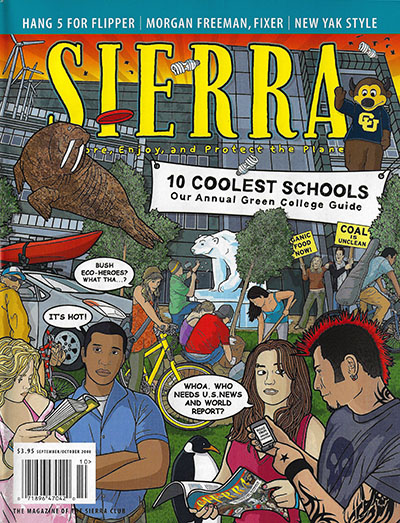 A different comic artist was hired to do this cover, but it had nothing to do with my contribution. Guess it was just a coincidence…right?

I really should have kept better records how all the oddball and one-off projects came my way over the years. I can’t for the life of me remember how this one got started, but one day in early 2008 I was contacted by a fella named Bob Sipchen about doing what he called a “graphic novel” for an issue of Sierra magazine.

The term had wedged its way into the mainstream by then, but was still misunderstood. To those of us in the comic book world, a “graphic novel” is a self-contained volume with a substantial number of pages. Could be original, could be a reprint. The point is, like a novel, it’s a singular unit. What Bob actually wanted was a 6-page comic strip that visualized how a high school in New York City was introducing its disadvantaged students to environmental issues.

They had gone on a field trip that was sponsored by the Sierra Club, and Bob wanted to do more than just write an article about it. Somehow, he found me and asked if I’d be interested in adapting a short script (written by him) into 6 color pages. I’m always up for something fresh, so I said sure. He sent me the script and some photo reference taken on the trip.

Bob hadn’t written a script like this before (few people have), so it was overloaded with information and required some trimming. Unless you make comics all the time, you don’t really get a sense of how much information you can comfortably contain on a page without crushing it (a lesson I learned way back when I attempted to adapt a certain Star Wars novel). So the first thing I had to do was write a second draft that maintained the essence of the story in fewer pictures. Below are snapshots of the first and final drafts to demonstrate how the information was re-flowed. 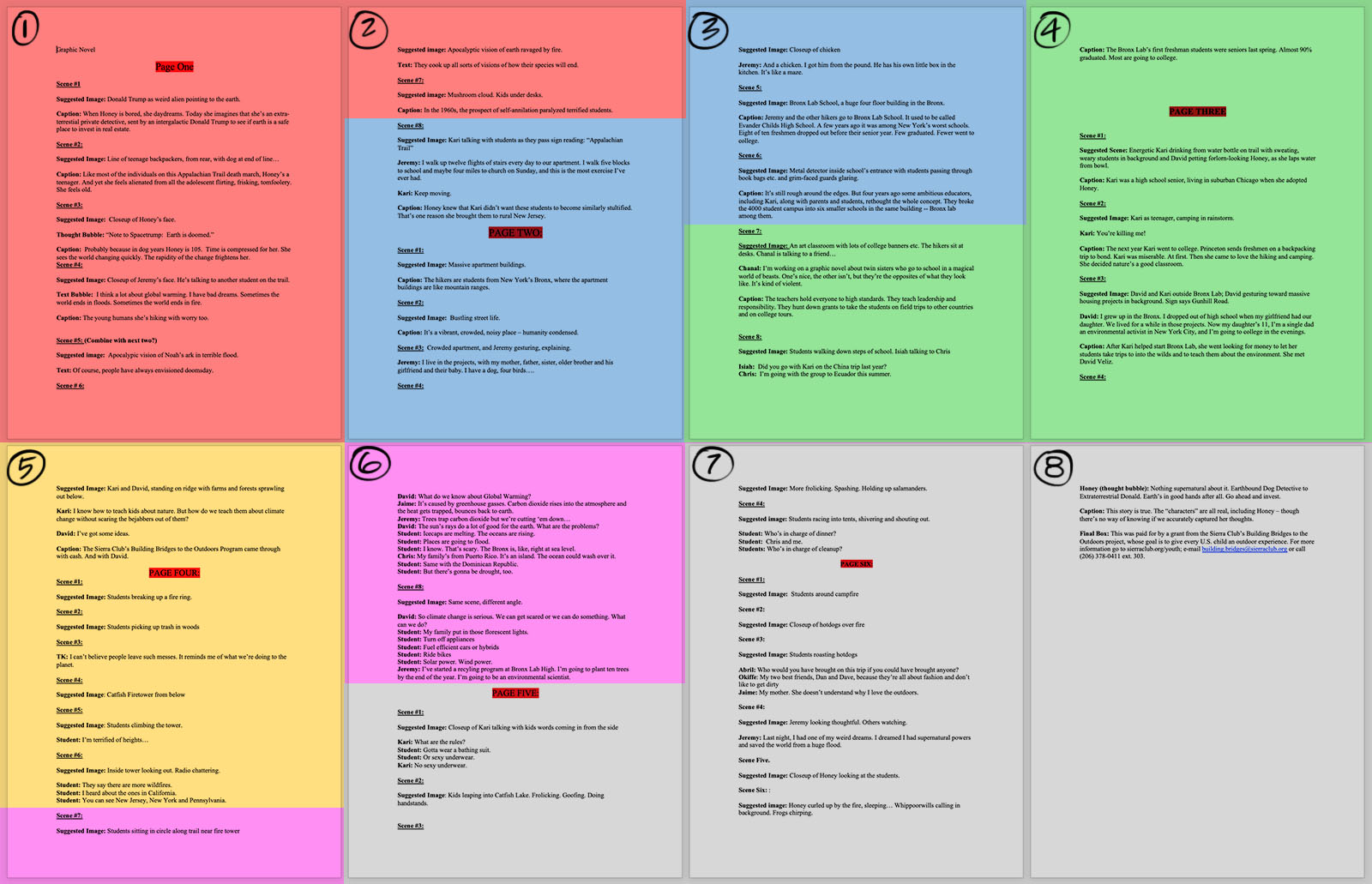 Above is the first draft, below is the final. The matching color blocks contain the same information. 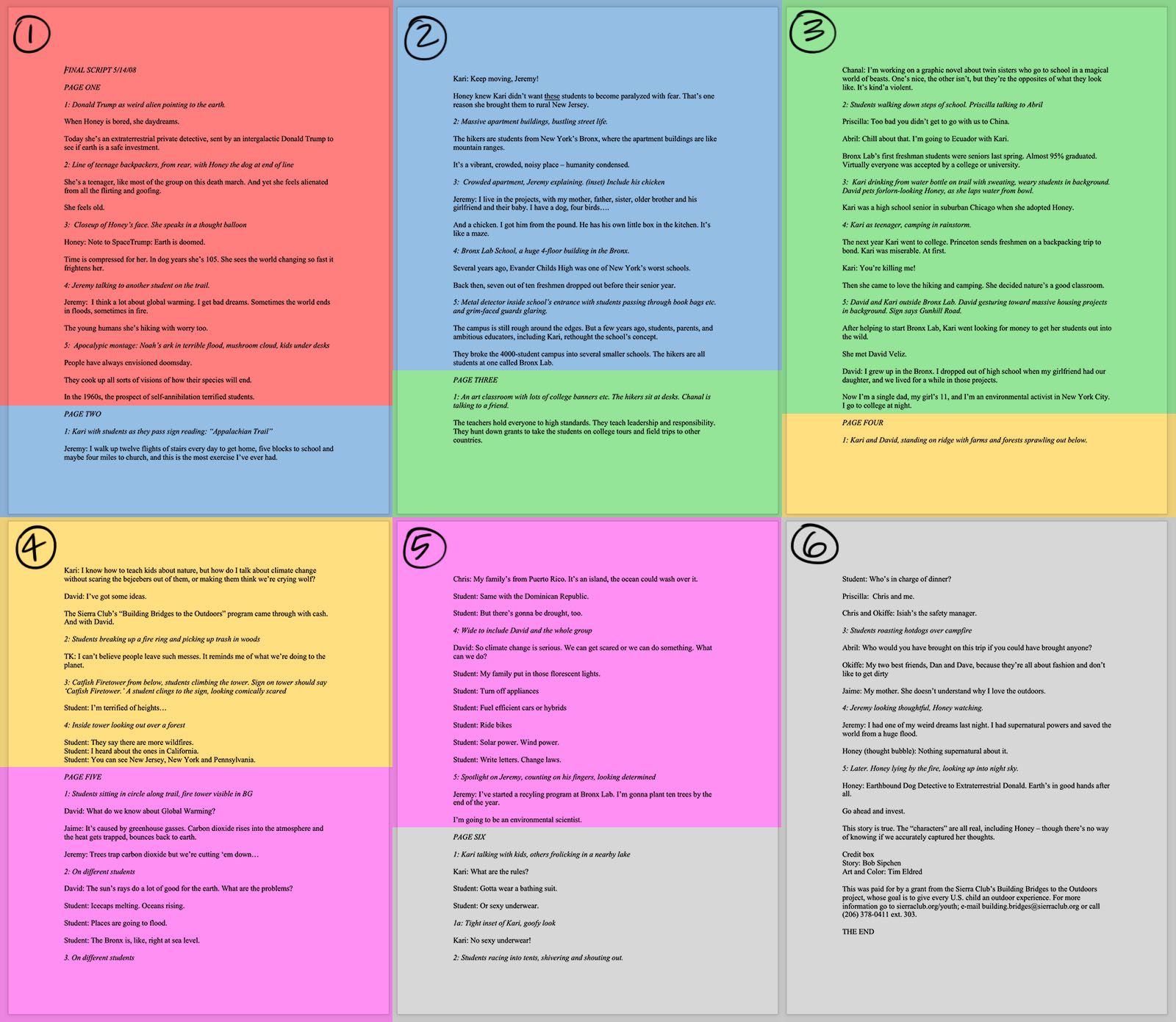 The script process took us about a month, from late April to late May 2008, and I finished the art and color on June 22. As you may have noticed, I don’t do a lot of “real world” comics on my own, so it was refreshing to find out I still could. My other projects at the time were Grease Monkey Book 2 and storyboards for Batman and Avengers EMH. So taking time to draw actual high school students on a field trip was about as different as you could get.

And they were actual high school students. Everyone who appears in the story is a real person who participated. I wasn’t expected to get their likenesses exactly right, just be in the ballpark. Color projects were pretty rare back then, so that added another layer of enjoyment. It’s always very satisfying when the final product matches the pictures in your head.

I’m still very happy with the look of this piece. Aside from the unfortunate appearance of one of the worst people in American history, I wouldn’t change a line of it today. It was published in the September/October ’08 issue of Sierra and can be seen in its entirety below. 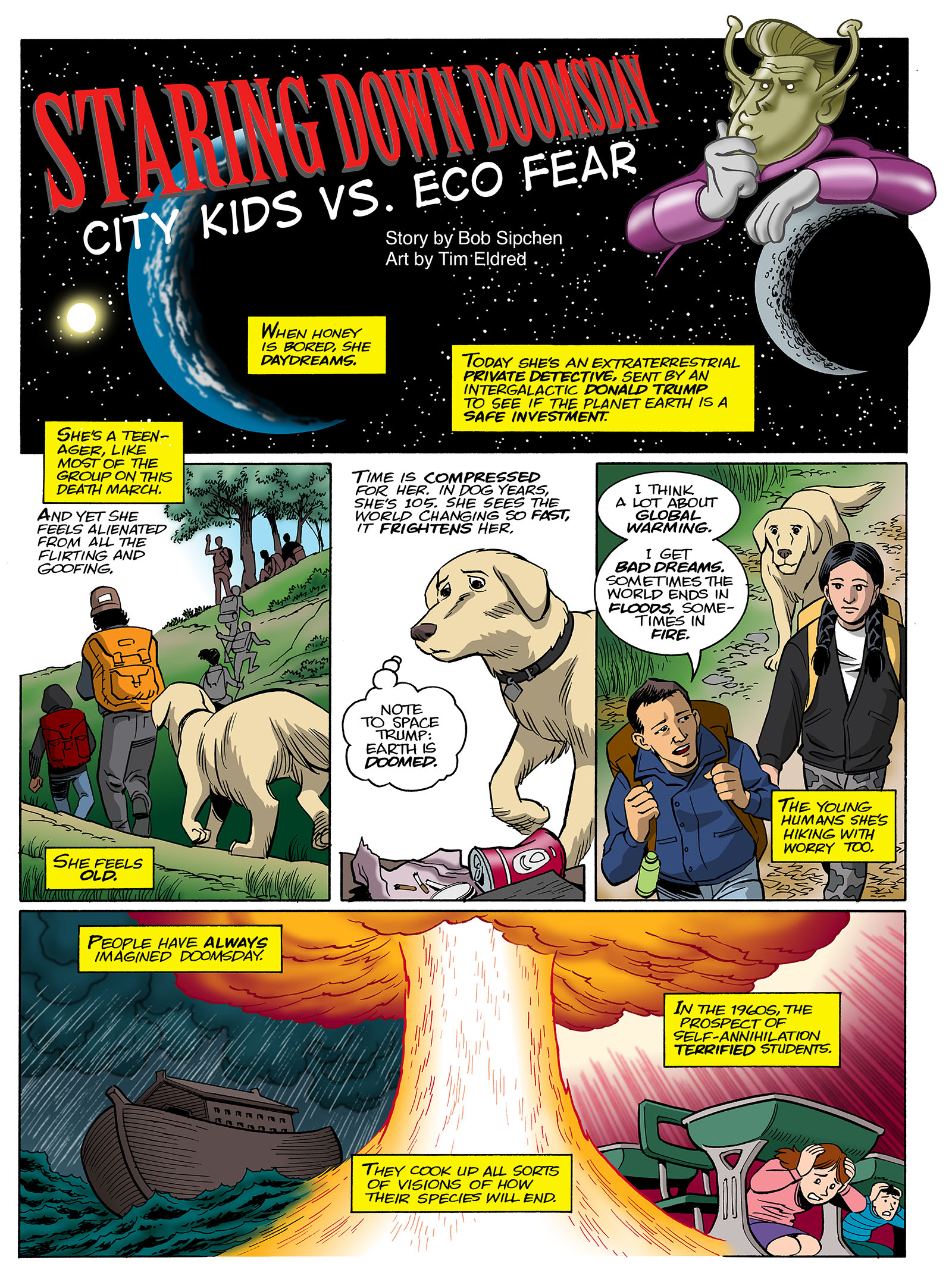 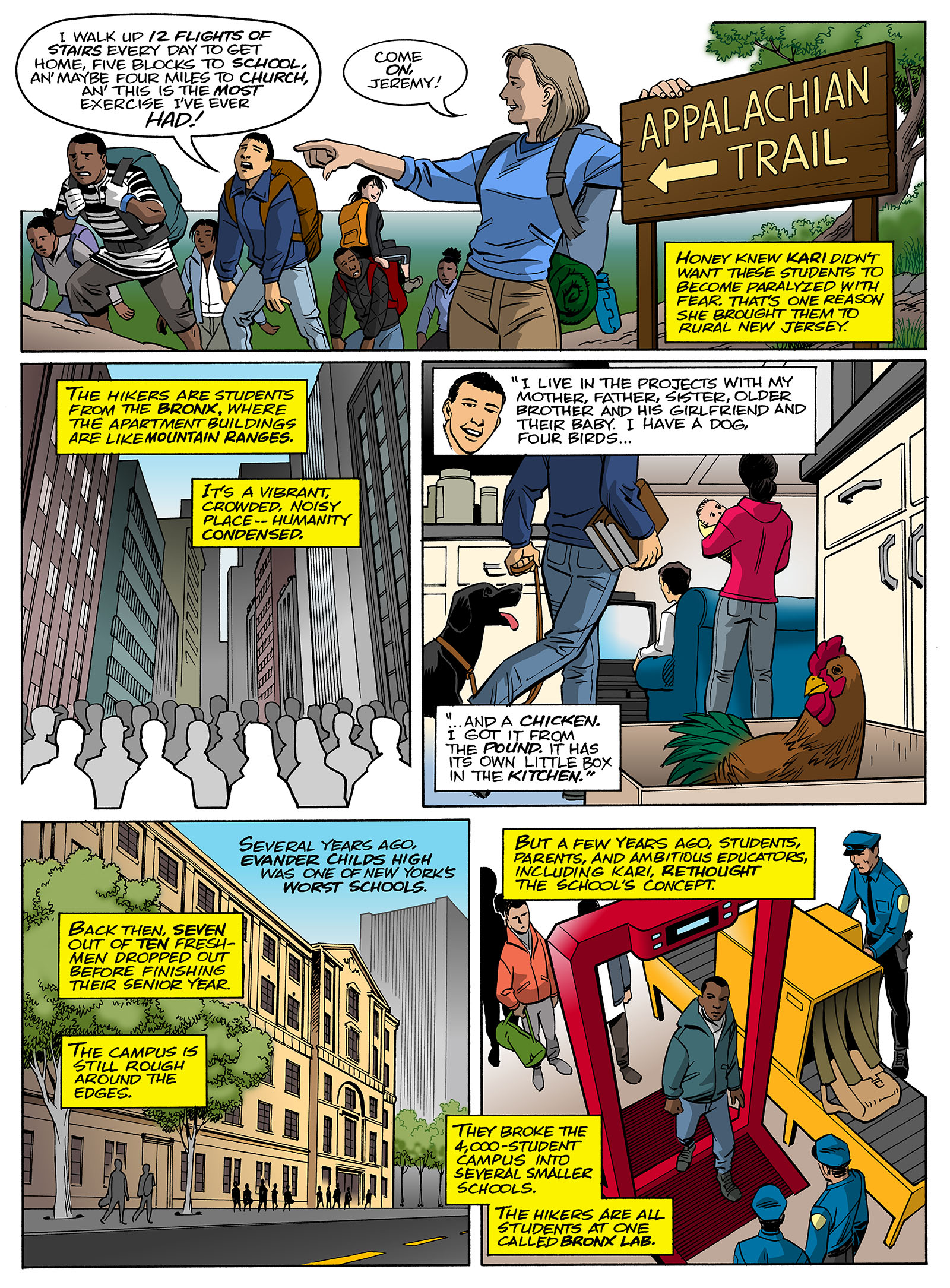 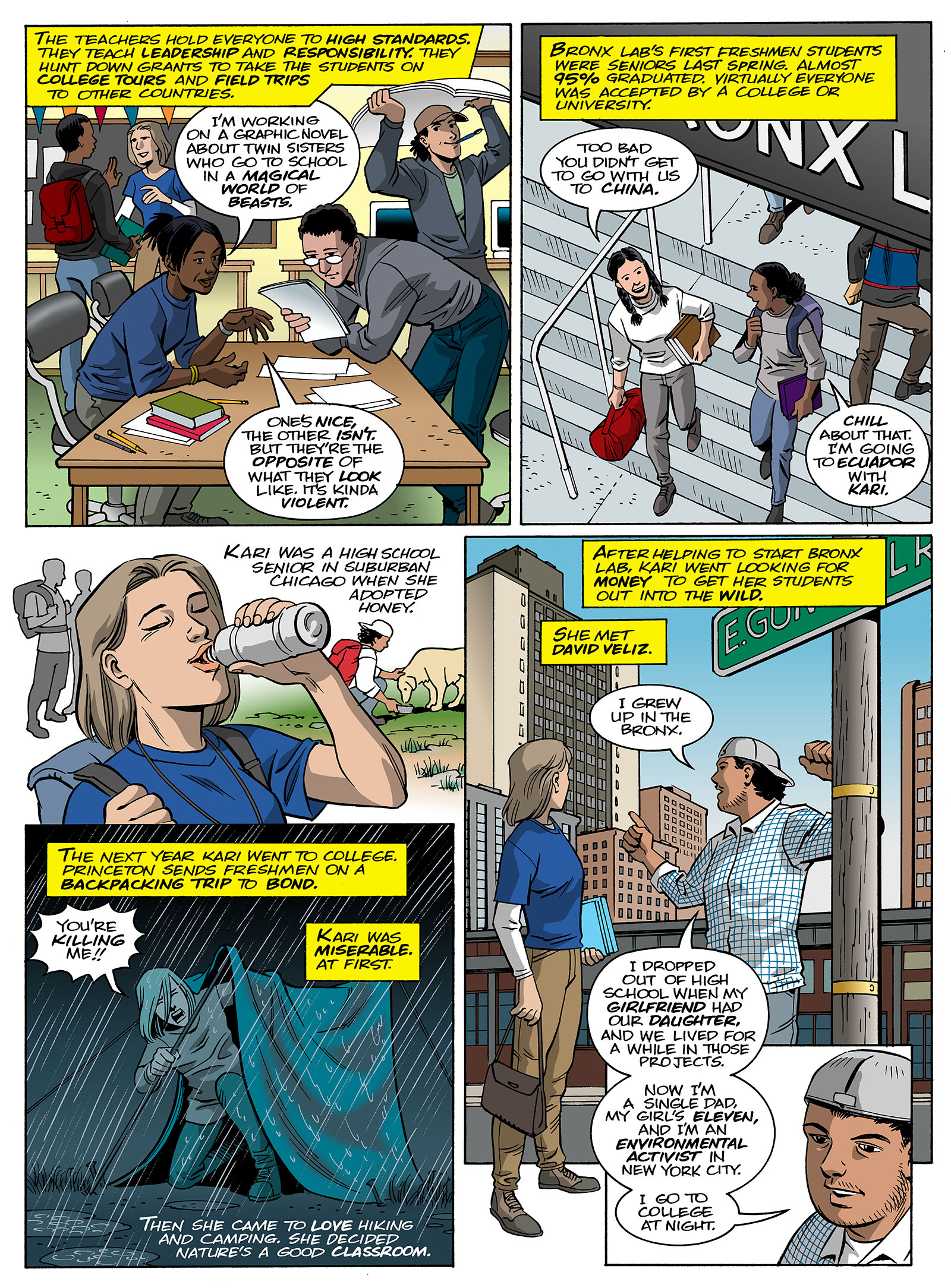 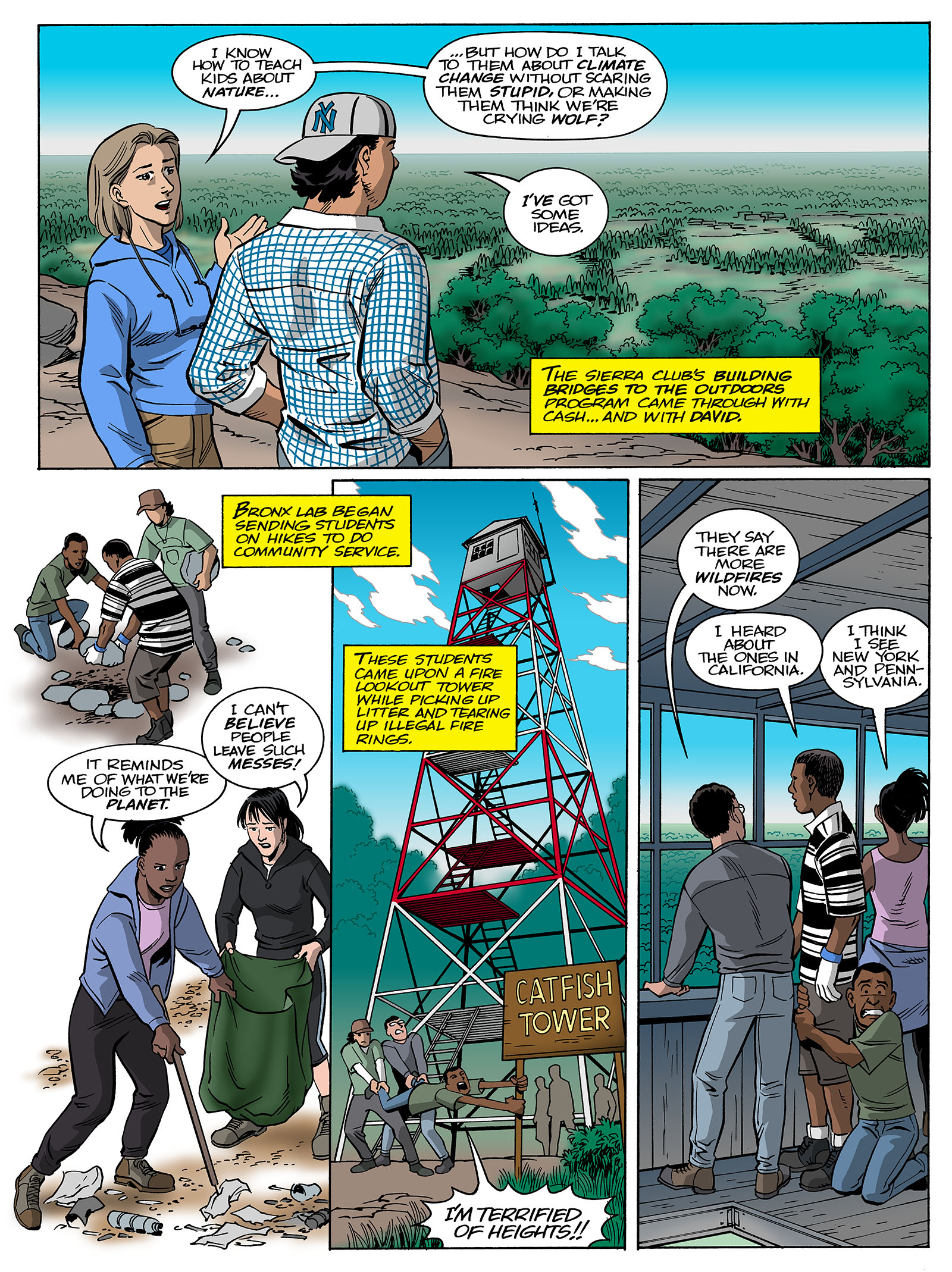 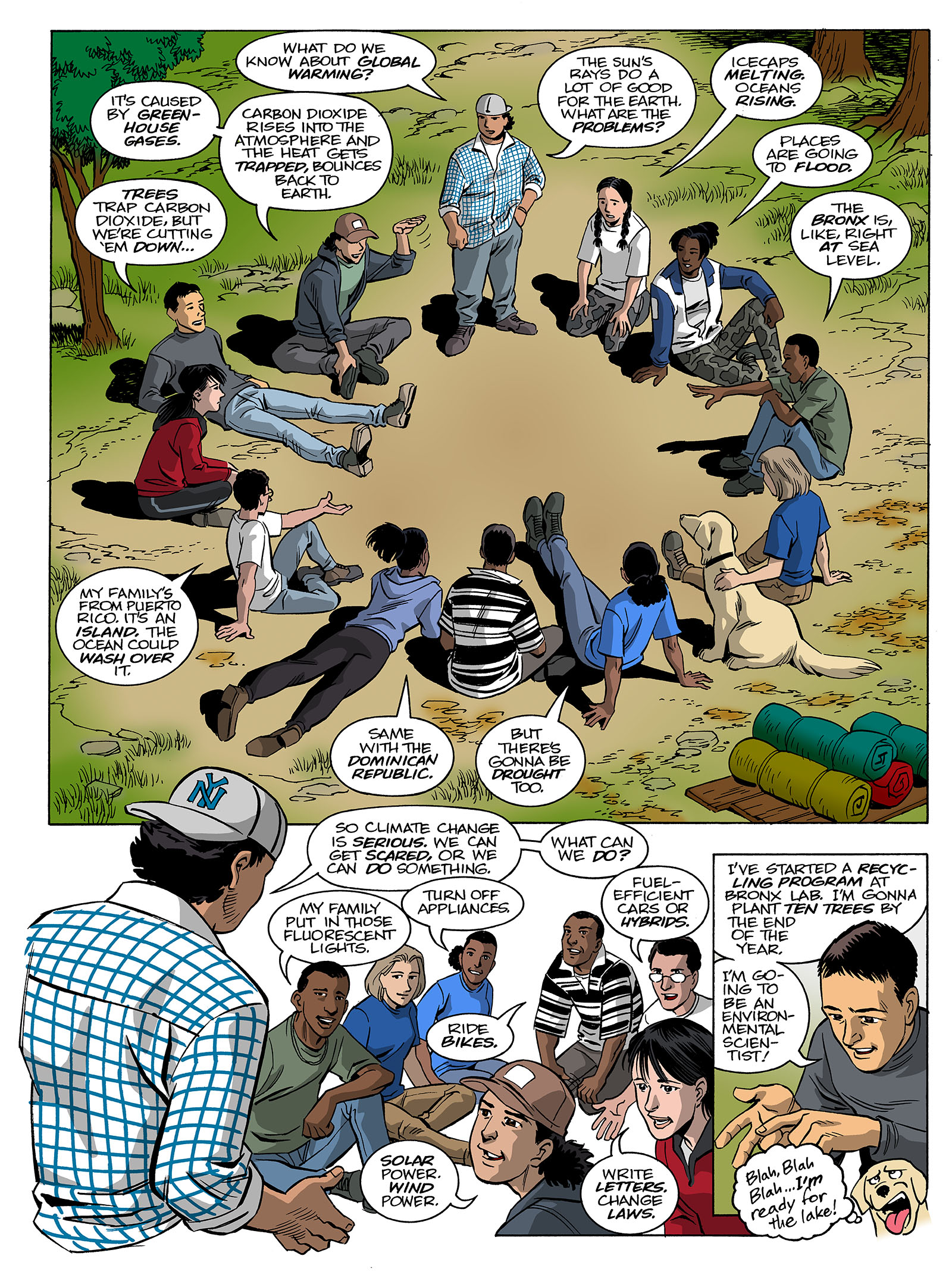 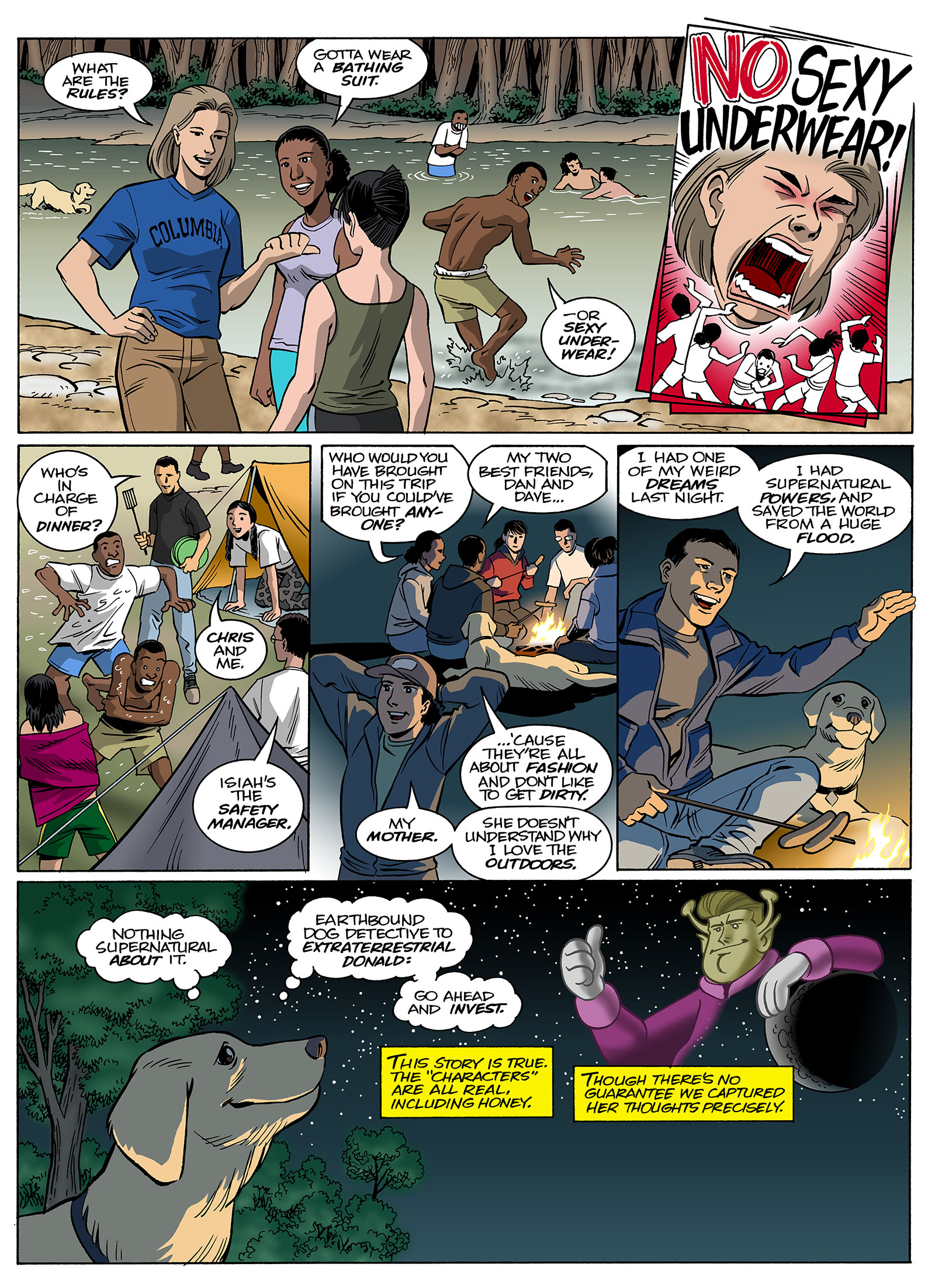 Bob Sipchen kept in touch for a while afterward, trying to get us a collaborative gig for the LA Times. He called a “prototype for visualizing the news,” and he came up with three concepts to test out the concept.

The first was to examine the L.A. drought. A citizen is angry about not being able to water his lawn, As we pull out, we see cracked and broken water mains.

The third concept was to look at the perennial plan to expand the Burbank airport, which is favored among big business but would create major problems for commuters. This is the one we decided to take to the finish line.

Here’s the finished art with partial color. Bob was happy with it and submitted the idea to the L.A. Times for its Sunday California section, but it didn’t work out for whatever reason. Back to TV and comic books…