Obligatory reminder: this is fanfic. I don’t own Star Wars, Lucasfilm does.
Their lawyers are very kind and understanding about this. 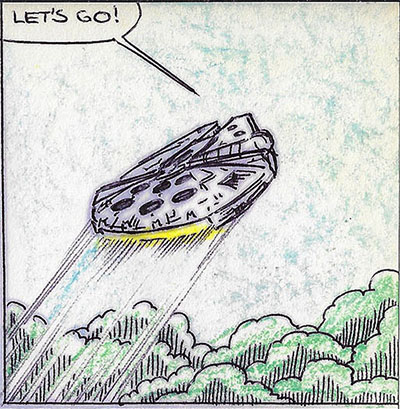 My years of making Star Wars comics as a kid can be divided into three phases. The first phase covered 1977-79, and was defined by the notebook paper I drew on. The second phase started with my ill-fated attempt to adapt Splinter of the Mind’s Eye. That’s when I upgraded to standard 8.5 x 11. Phase 3 started in late ’81 when I began contributing to fanzines. But that’s in the future. Right now it’s early 1980 and phase 2 is underway.

As I wrote in my Splinter article, my vehicle of presentation was a newly-acquired ring binder with 32 pocket pages inside. It could accomodate 64 comic pages, so that became my new goal. Today we refer to something of that length as a graphic novel. When I couldn’t get Splinter to work in 64 pages, I tossed it aside and started on an original story instead. And since it was made in 1980, you can probably guess that it had something to do with The Empire Strikes Back.

I don’t remember exactly when we started getting story details, but the first one that struck me was that the rebels would now be based on a snow planet called Hoth. Ever since the first movie gave way to spinoff stories, the Alliance had been firmly planted on the moon of Yavin, and it didn’t seem like there was any urgency to leave. Obviously, the threat level must have increased to motivate such a change, so that’s what I decided to explore in my next story. As it opens, the exodus has begun and is about to get significantly more urgent.

I’d abandoned Splinter in mid-January of 1980 and started this new adventure in March. As always, I began with a vague idea of where the story would go and got there one page at a time. It was the first time I’d given myself this many pages to work with, so there was always a chance for the pacing to completely go off the rails. Fortunately, it didn’t. As amateurish as my scripting still was, the plot unfolded pretty well.

I also managed to break it up into four parts of exactly 15 pages apiece. These days, I can’t imagine achieving that without precise planning. I was still cramming about twice the amount of information on a page as I should have, but I started finding moments to loosen up for an occasional splash page. My very first double-splash can be found at the end. 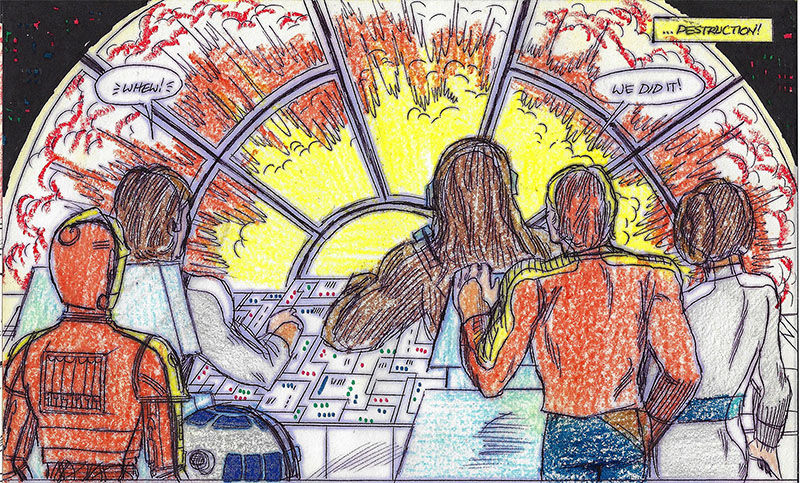 There were some important influences to take into account. First, at this point I’d become an avid viewer of Star Blazers on TV every day after school. It had purchased real estate inside my head and just kept on expanding (today it has reached nation status). It may have had something to do with my decision to illegally launch the Millennium Falcon.

Second, Star Wars licensing had finally caught up with demand and there was a crap-ton of reference materials at my fingertips, the most important of which was The Art of Star Wars, a treasure trove of a book that gave me almost everything I wished for. What it didn’t have, I could find in other books or magazines, or in my complete set of Topps bubblegum cards. Which, of course, I still own. Duh.

According to the dates I kept on each page, the production period lasted from March 24 to May 4, almost exactly six weeks. I worked steadily on it every weeknight and through the weekends, excited to see where it would take me. During that period, a couple of important things rolled in: the Empire Strikes Back novelization (April 12) and the first Marvel adaptation (paperback edition, May 1). Naturally, I devoured both upon arrival. Knowing exactly what was to come allowed me to tighten up continuity. There is a Darth Vader/Luke Skywalker duel in this story, but I worked it out in a way that didn’t conflict with the “real” one. 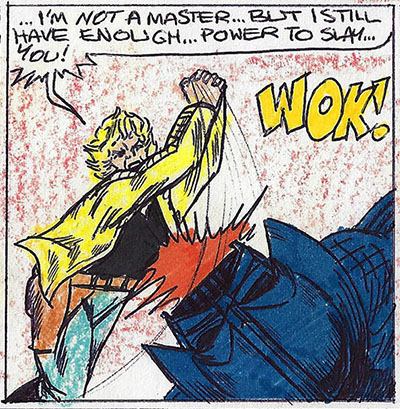 The movie premiered on May 21, but not in my neck of the woods. This was still an early era for multimedia blockbusters, where novels and comics got released in advance, and films didn’t always open everywhere simultaneously. The May 21 premiere was exclusively in 70mm, which automatically limited how many theaters could project it. In western Michigan, where I lived, we had to wait another four weeks (June 18) for the 35mm version to arrive. It sounds weird and primitive today, when movie premieres are coordinated with all the precision of a moon landing, but somehow we managed to survive it.

Anyway, Empire was going to have a huge impact on the Star Wars comics I would make next. But this one still has a special place in my heart for being the last story of the “first age,” before the rule book changed forever. 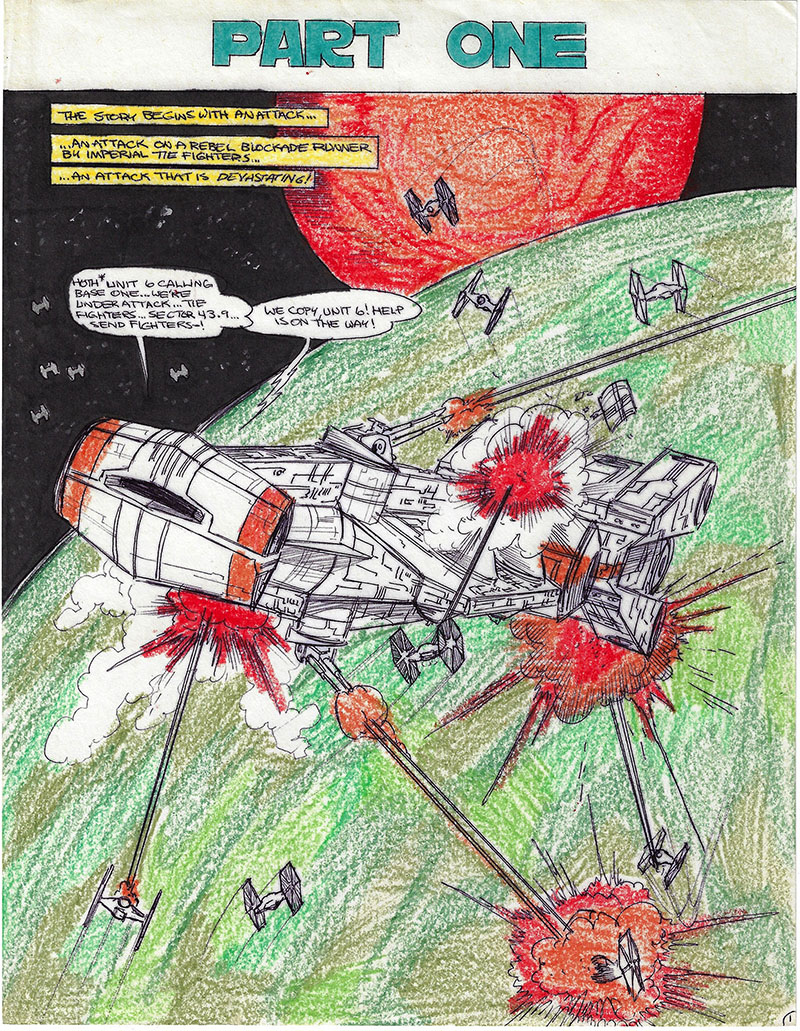 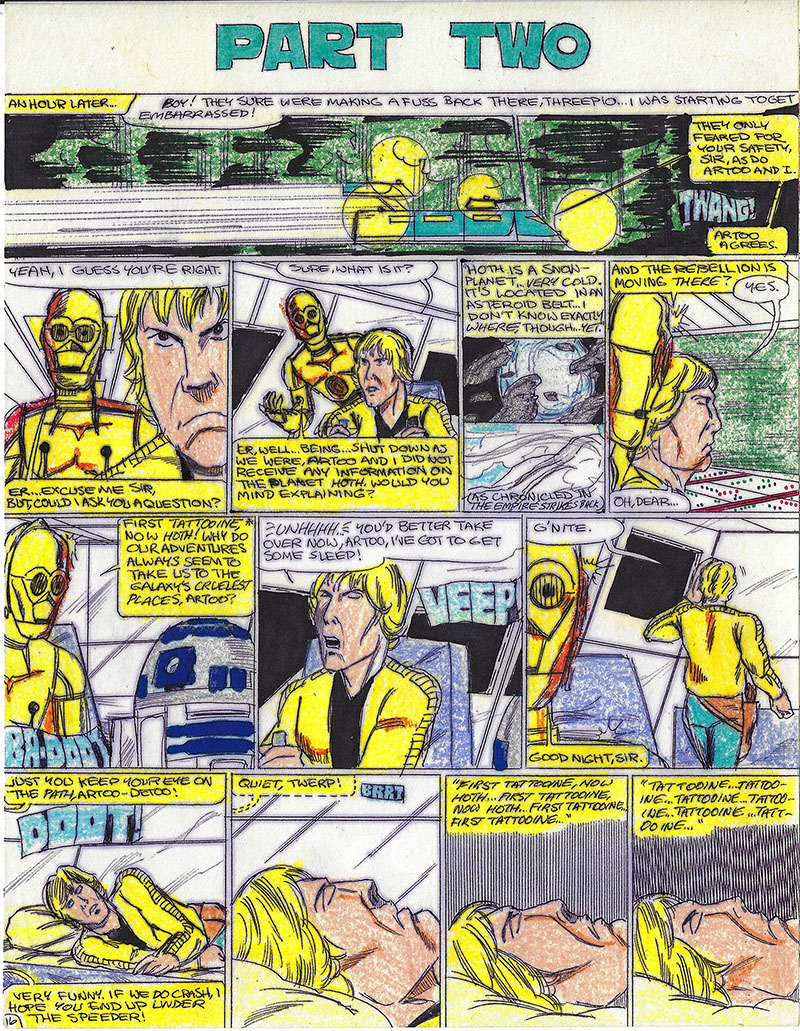 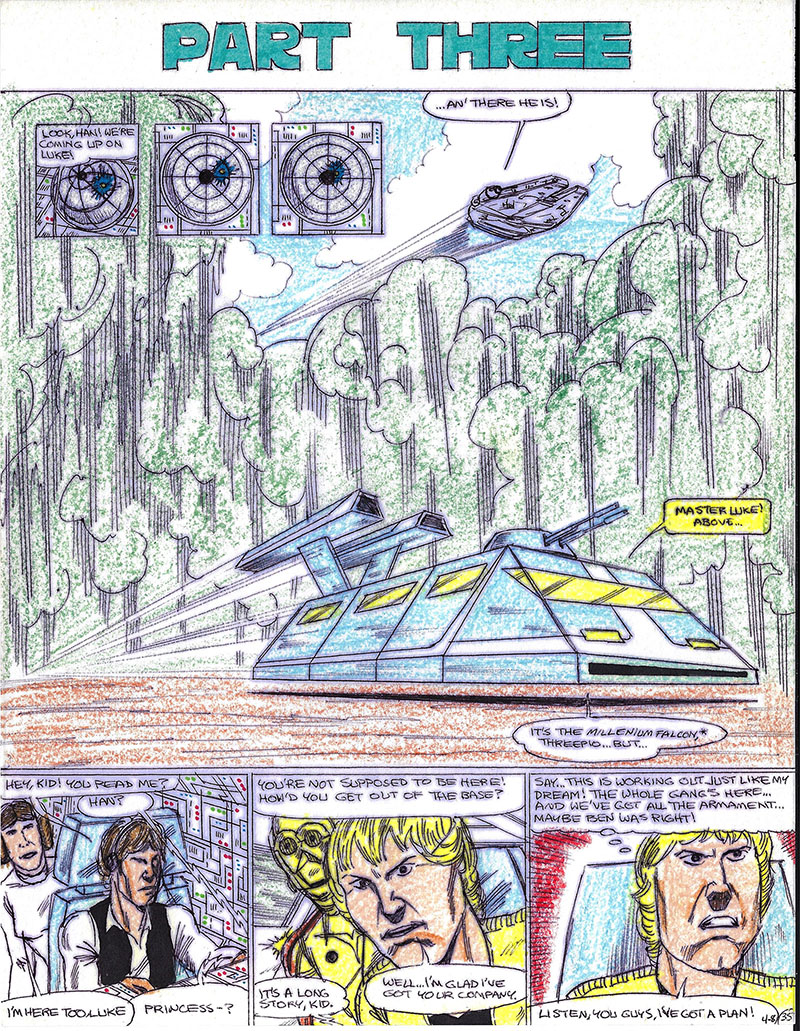 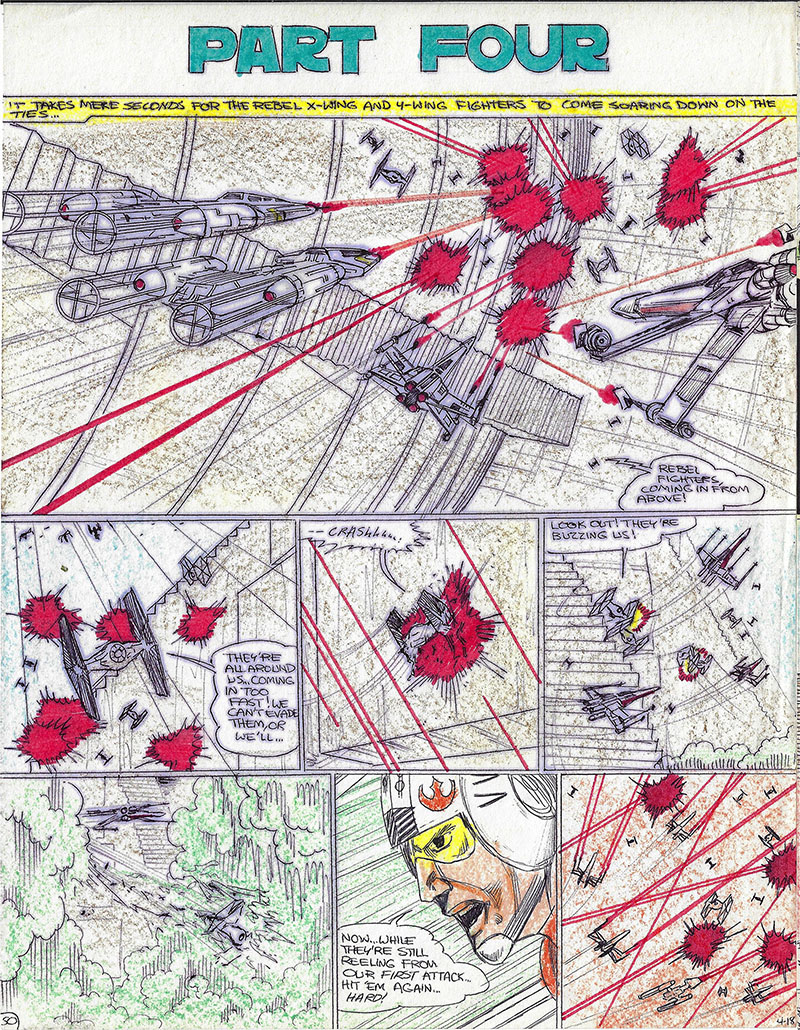 At 60 pages (plus 4 in the appendix) this was my first long-form story, and the last one I did before turning 15 in June 1980. I was a freshman in high school, when it was still VERY uncool to admit you were a Star Wars fan. You kept it on the DL if you didn’t want bruises. But you can bet there was a thriving rebel underground. We knew our time was coming.

By going full color with this one (crayons and markers), I could occasionally use cutouts of spaceship images. These came from extra gum cards and other sources. A big Millennium Falcon image came from the box art for the MPC model kit (not the box itself, but an ad I found somewhere). A huge Star Destroyer image came from leftover Star Wars wallpaper, which adorned one wall of my bedroom.

I used a couple different kinds of paper for this project, and over time the ballpoint ink has chemically interacted with one of those paper types. Specifically, the paper has further absorbed the ink to create a halo around the lines I drew. It’s not a scanning error, it really looks like that. Sort of like old black and white film when the emulsion breaks down. Obviously, it was unintentional. But I kinda like it.