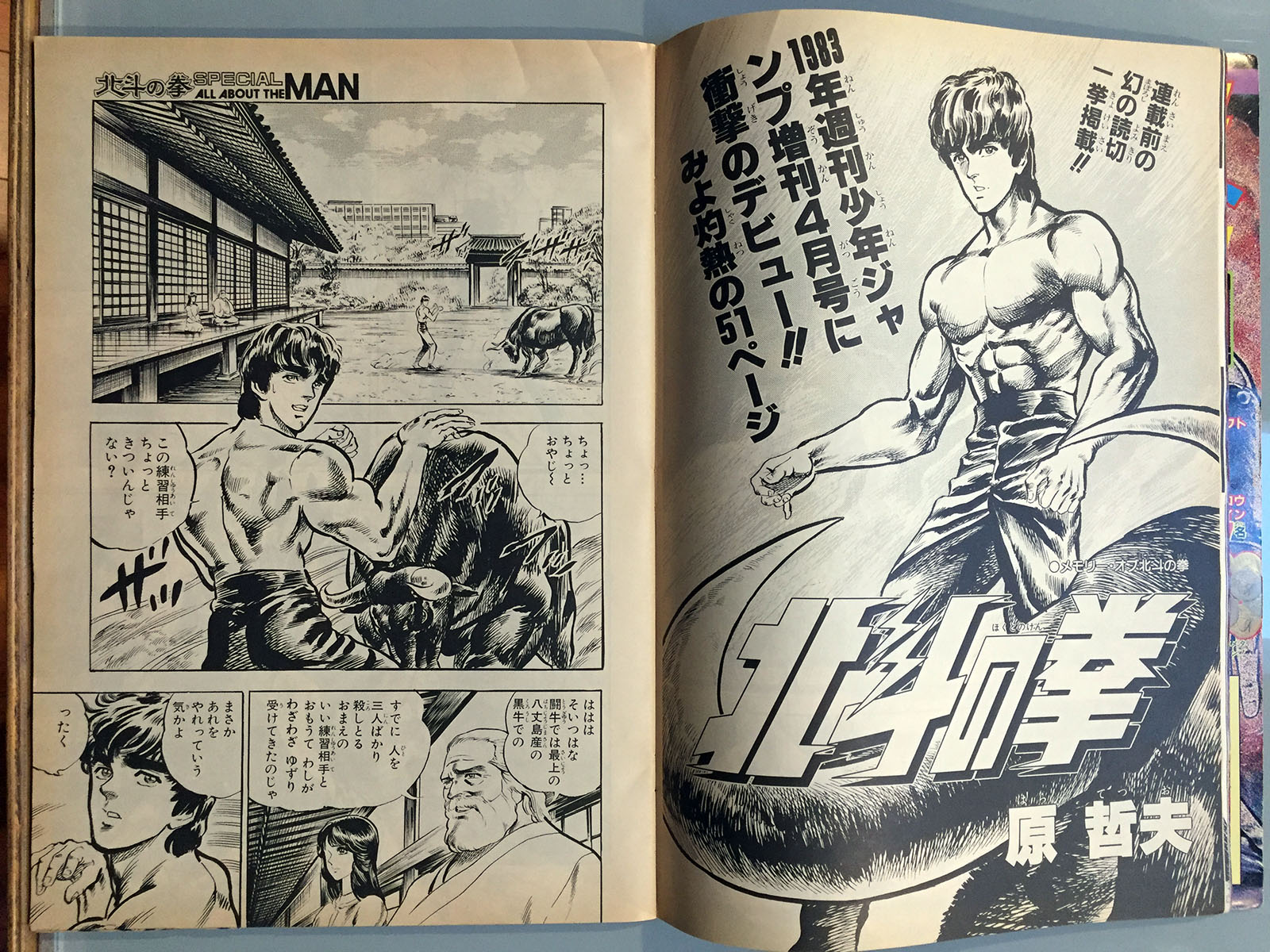 The original one shot prototype, published in the April and June 1983 editions of Fresh Jump, was set in 1980’s Japan and told the story of a teenager by the name of Kenshiro Kasumi, the successor of the “Hokuto Shin Ken” martial arts style, a deadly style which kills or cripples opponents internally by striking pressure points. Kenshiro’s main adversaries in this incarnation of the story were a rival martial arts school known as the Taizanji Kenpo (“Taishan Temple Martial Arts”), a secret organization of assassins with influence over the Japanese government and control over the police. Kenshiro’s girlfriend, Yuki, becomes a witness in one of the organization’s assassinations and is subsequently killed by the culprit named Goda, with Kenshiro being framed for the crime. This event serves as a catalyst for Kenshiro’s war against the Taizanji organization. 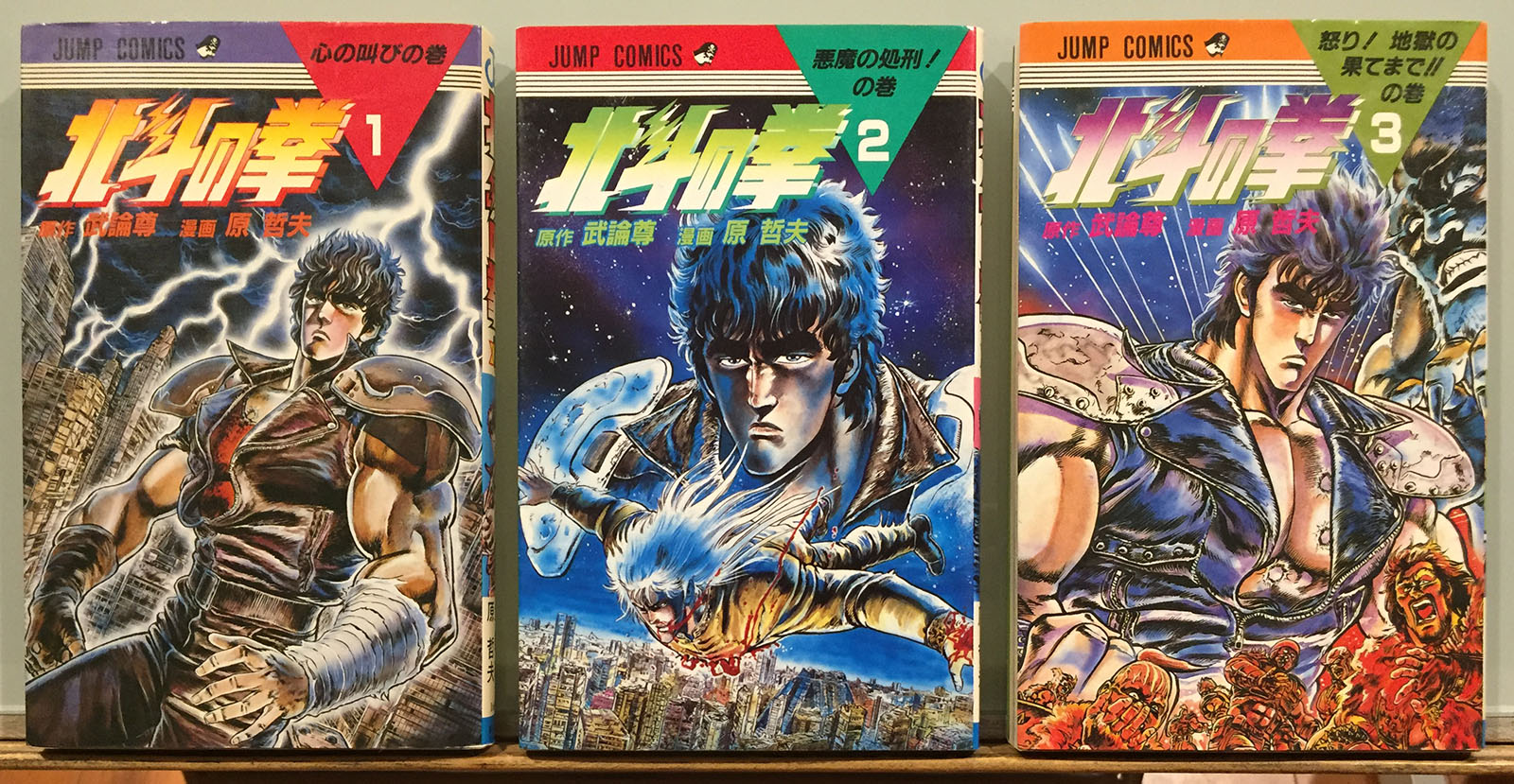 The series was originally published by Shueisha in the magazine Weekly Shonen Jump from September 1983 to August 1988 (for a total of 245 chapters), and was subsequently reprinted in 27 paperback editions under the Jump Comics imprint. The first paperback collection was published in March 1984 and subsequent volumes came out every three months like clockwork to end with Vol. 27 in March 1989. In terms of syncing with the anime, TV episode 50 landed in Vol. 9, the transition to FotNS 2 happened in Vol. 16, and the anime adaptation ended with Vol. 24. 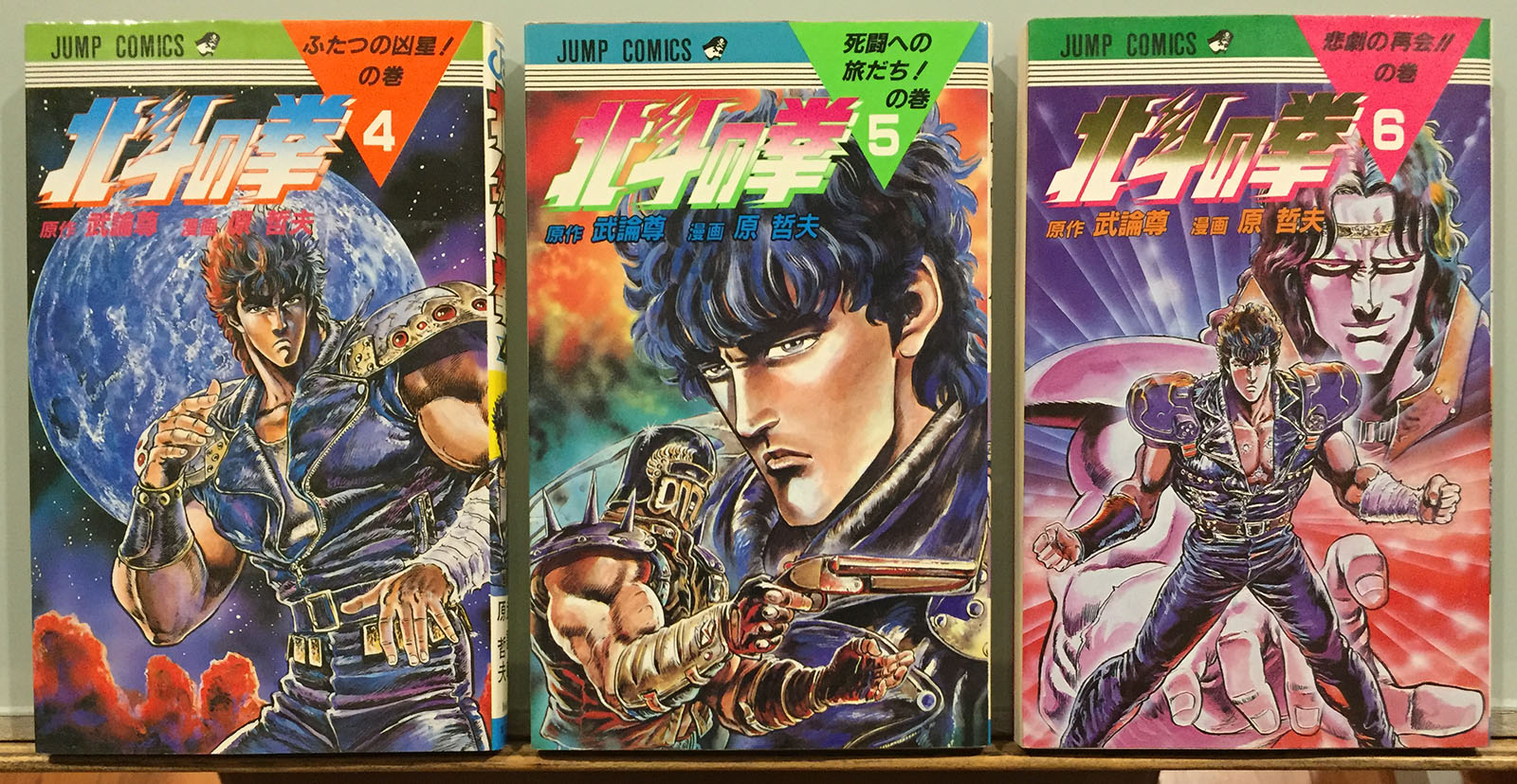 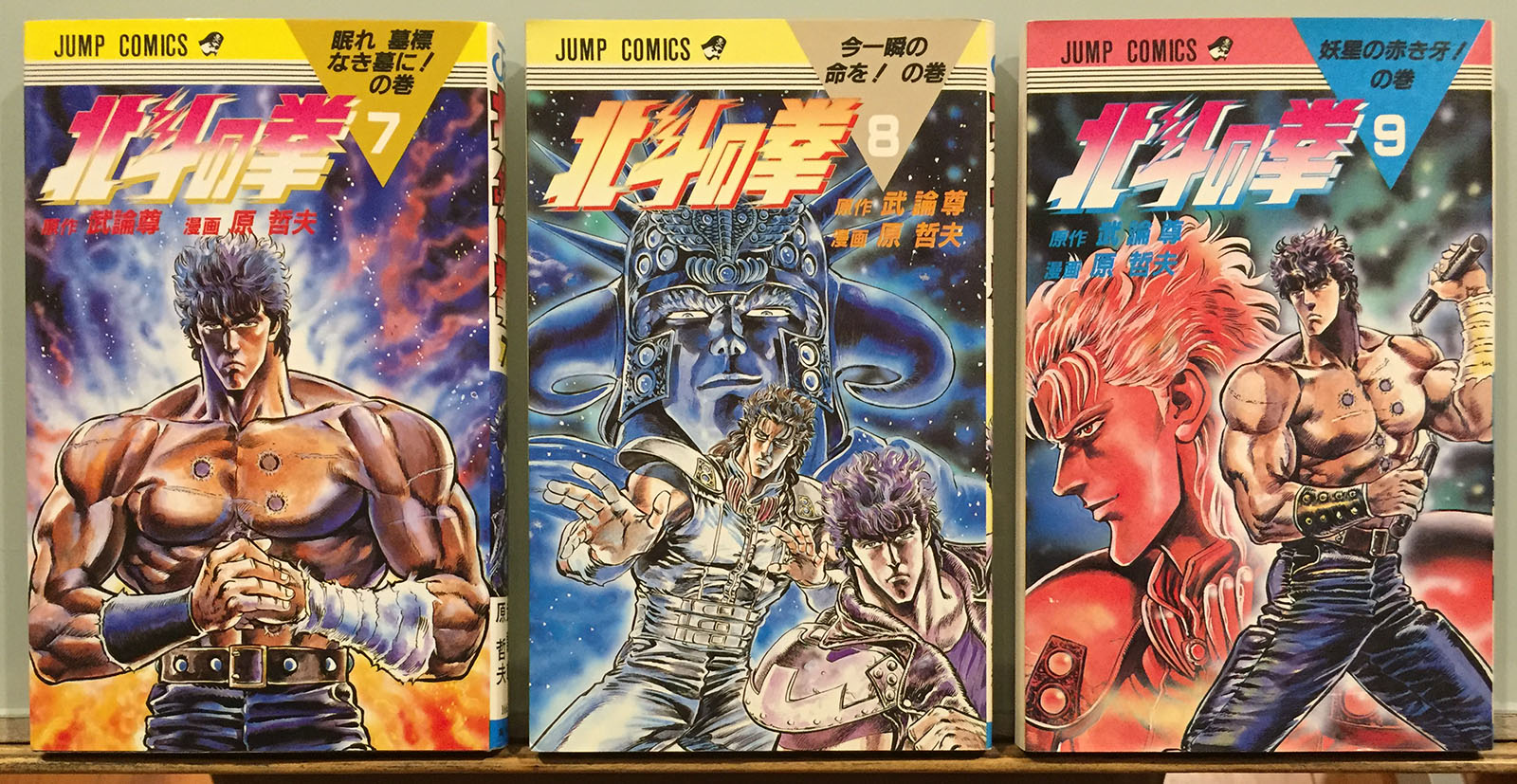 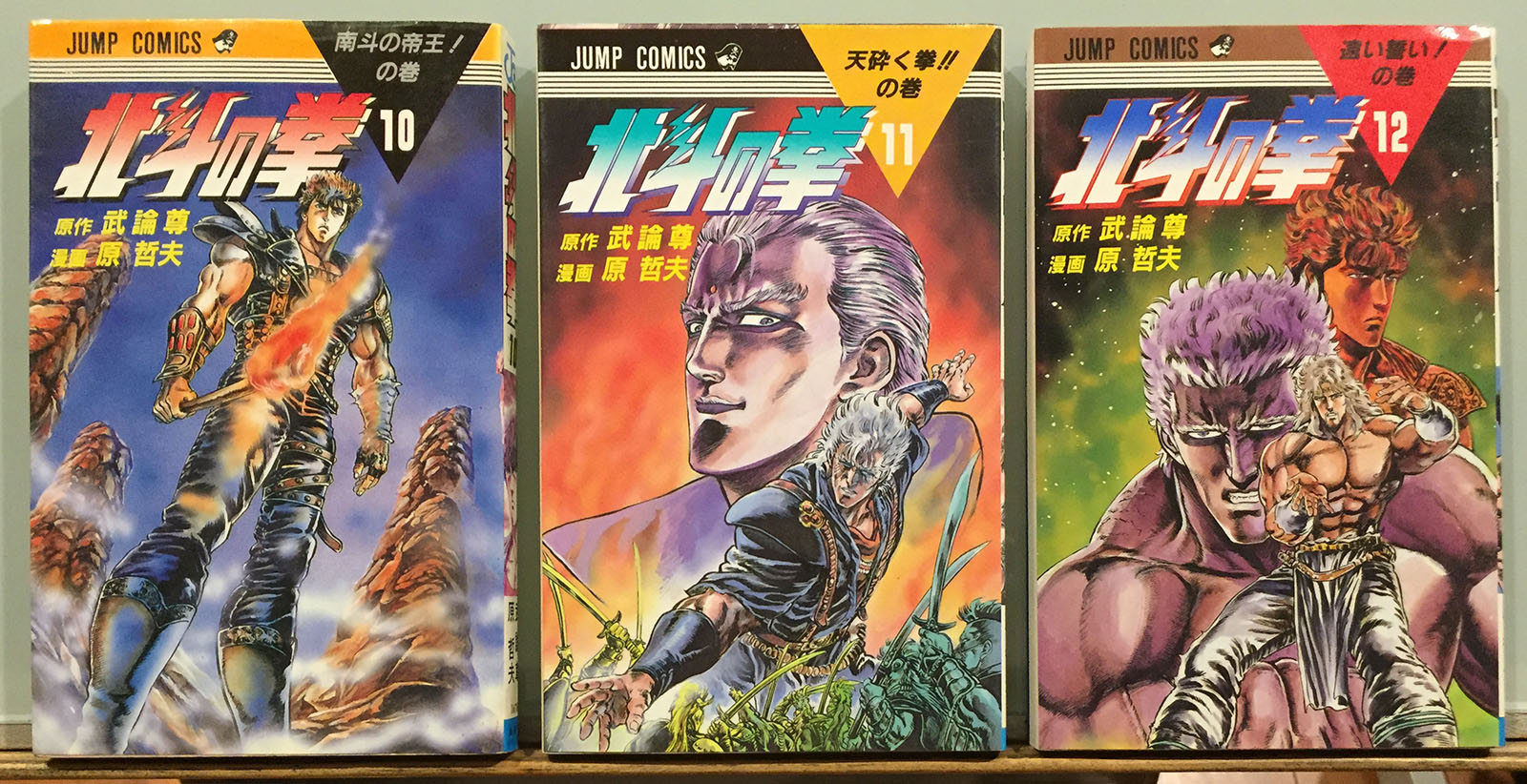 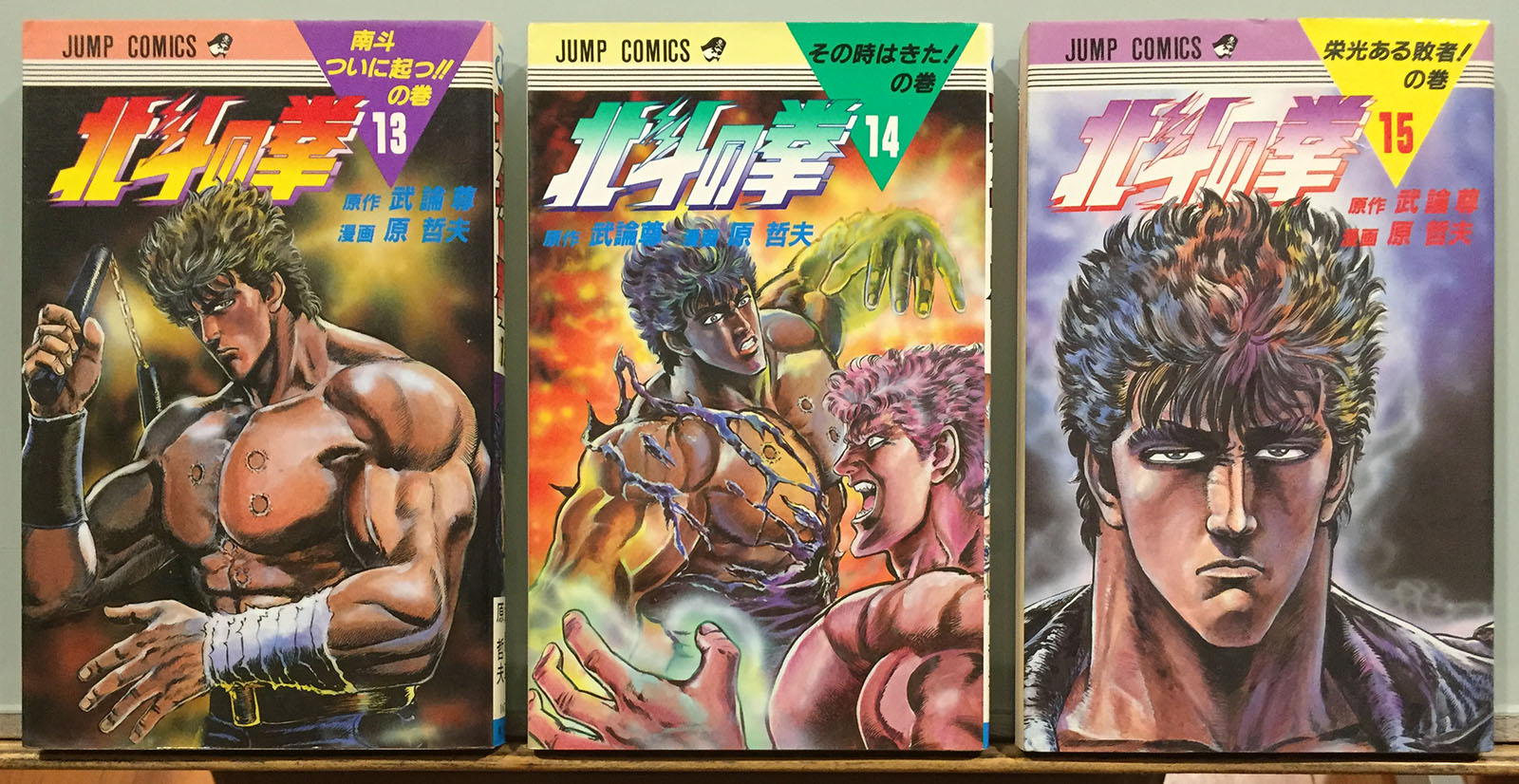 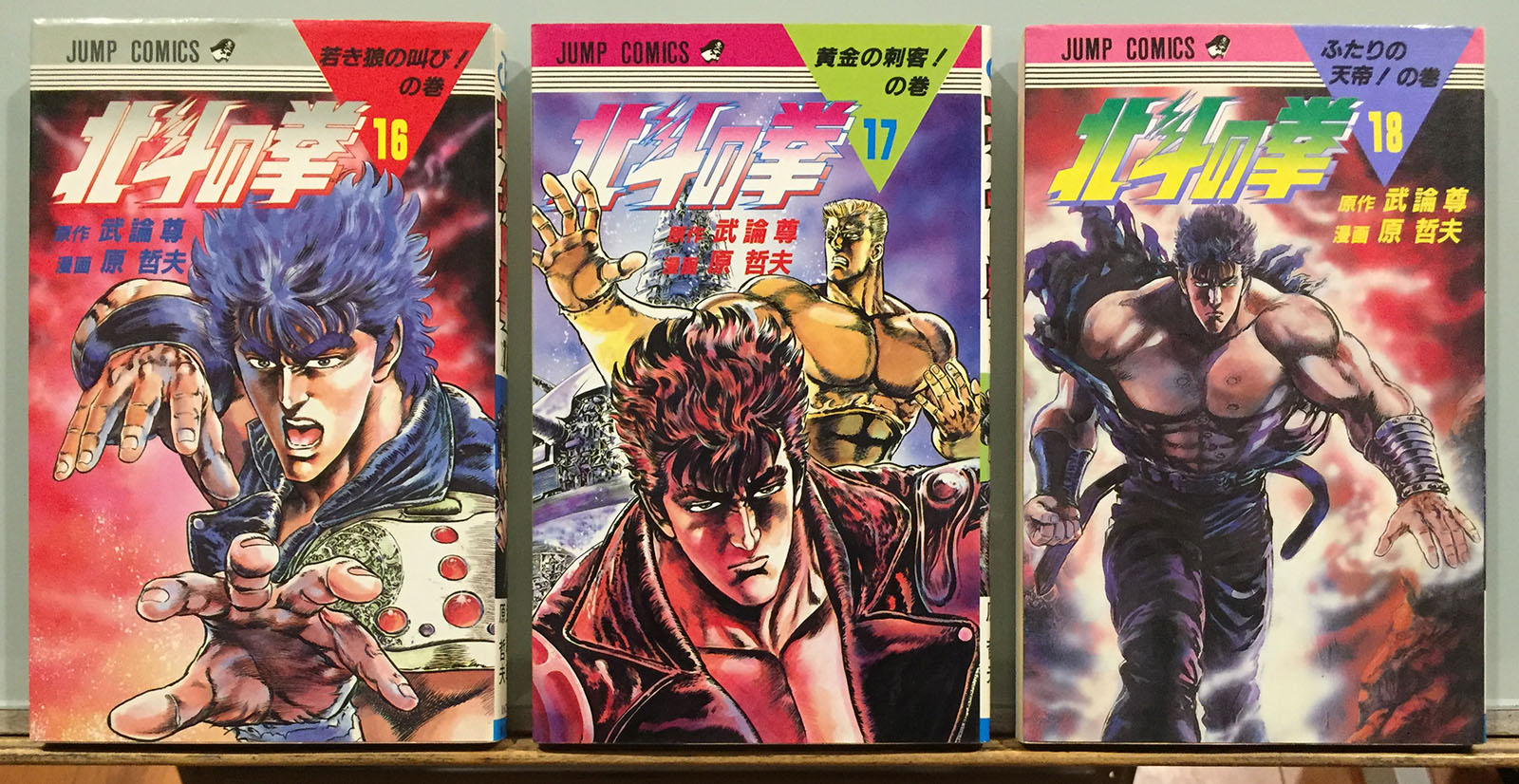 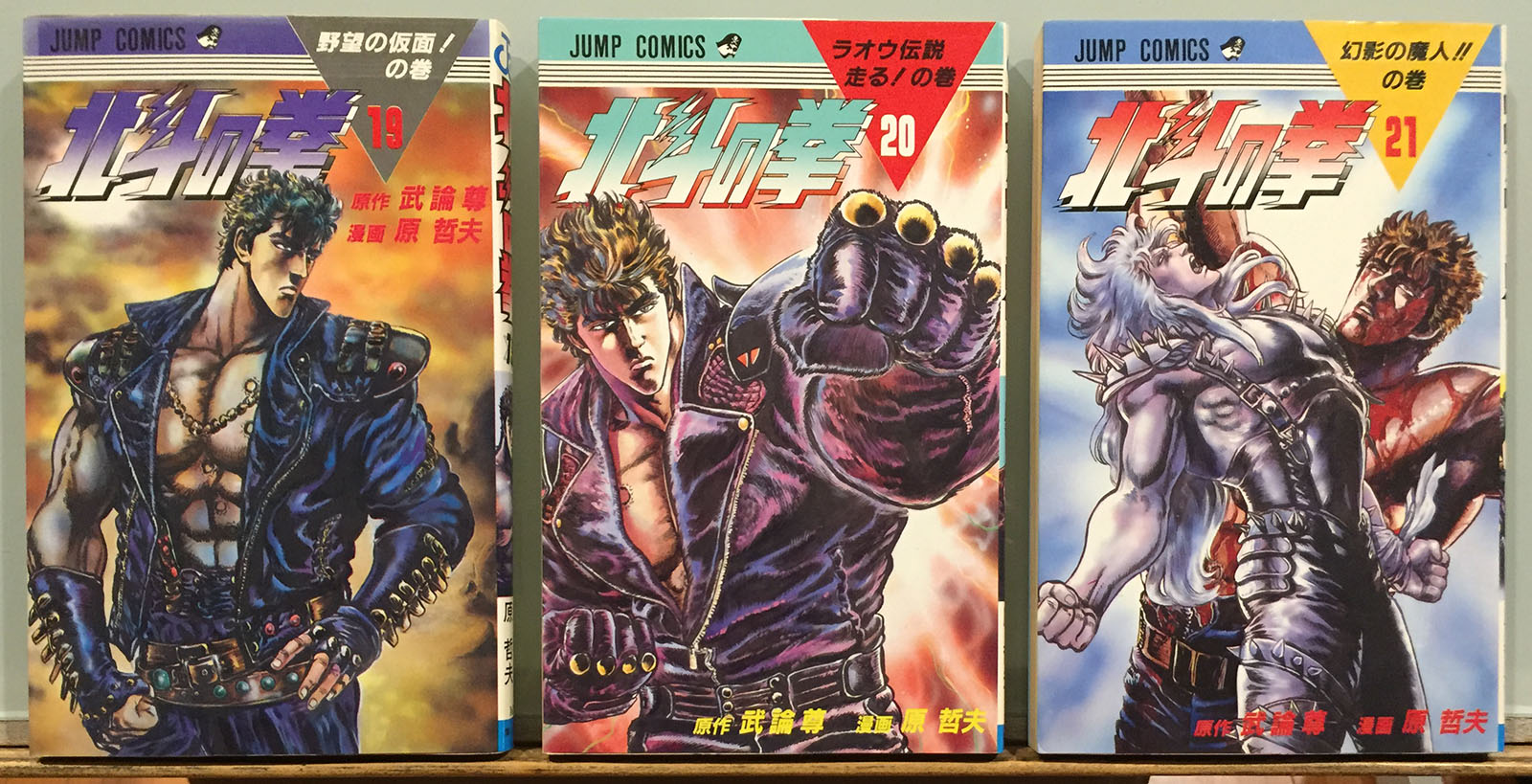 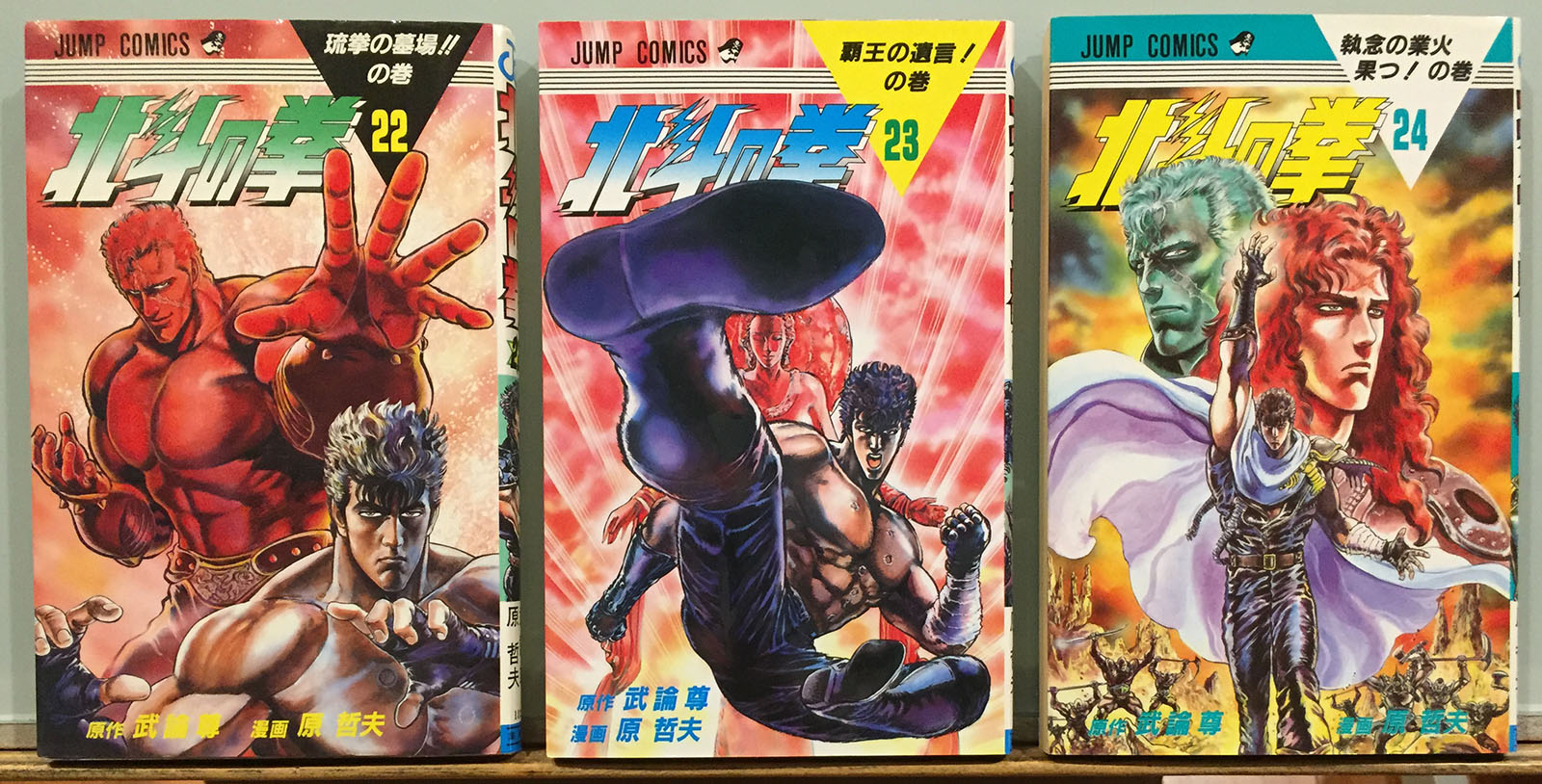 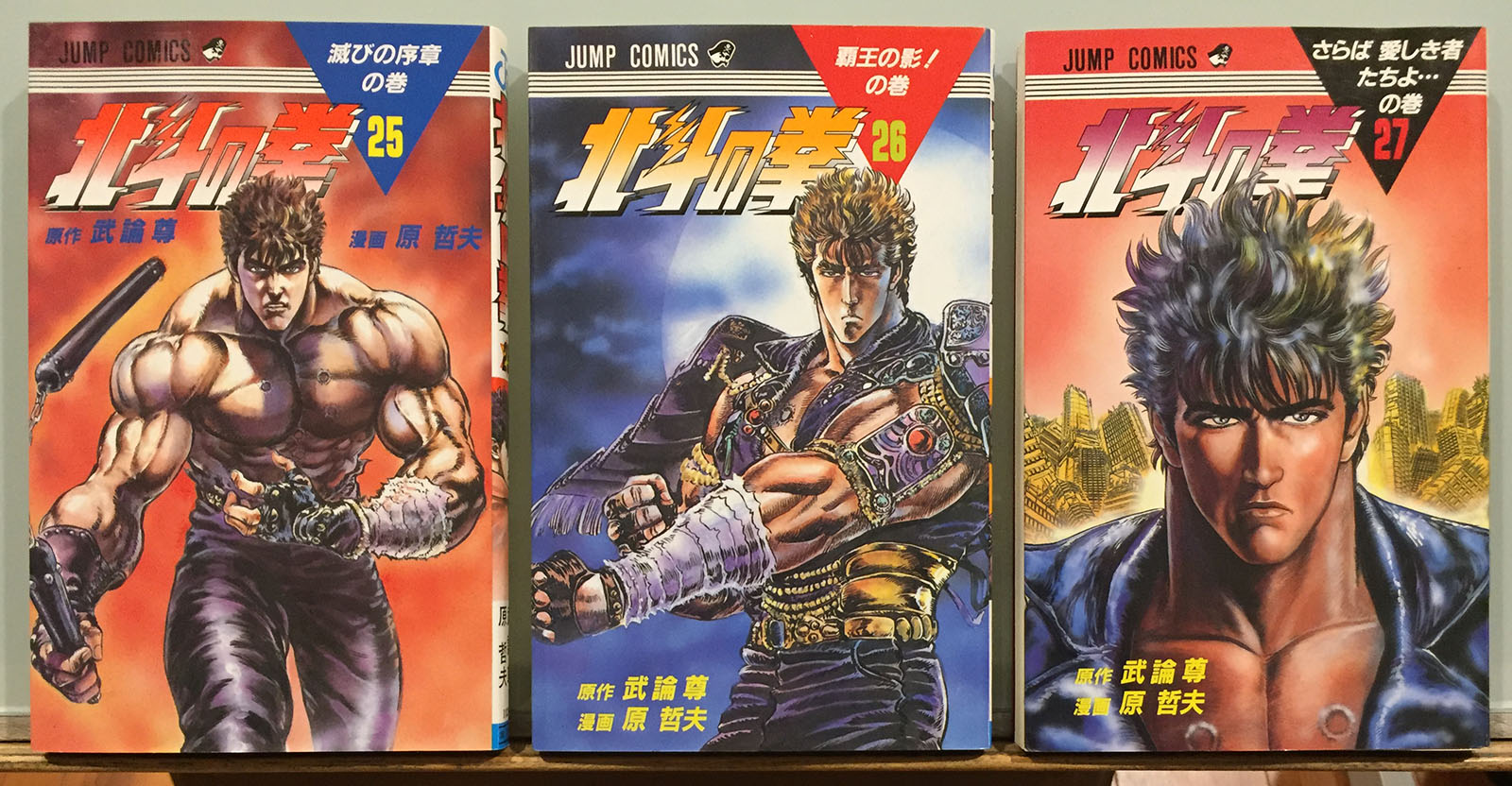 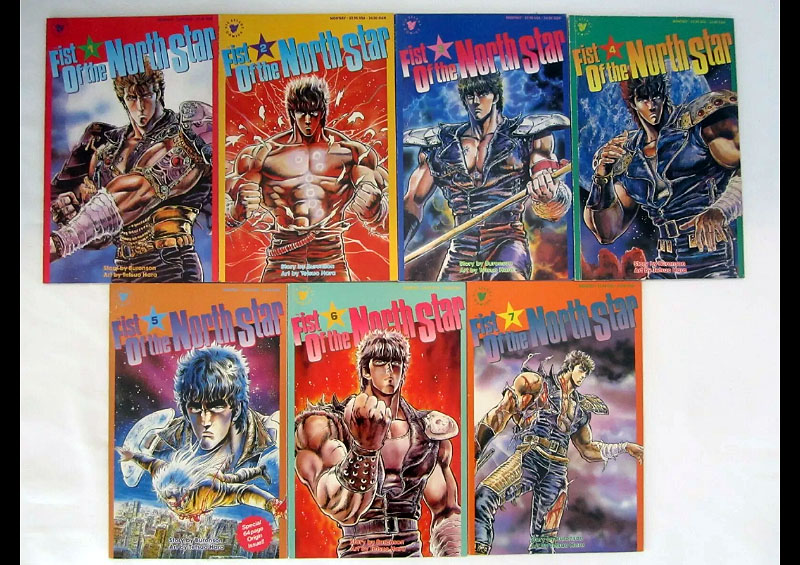 Viz Communications published the first sixteen chapters in English as an 8-issue monthly comic in 1989, which were later reprinted in a single graphic novel collection in 1995. During that same year, Viz resumed publication of the series as a monthly comic until 1997, lasting eighteen issues (spanning chapters 17-44), which were subsequently reprinted in three additional graphic novels. In this edition, all artwork was flopped for left-to-right reading, which inevitably compromised the experience.

Read an article by someone involved with this edition here.

Published simultaneously in Japanese and English by Raijin Comics and Gutsoon! Entertainment for the 20th anniversary, this was the first and only full-color edition. It debuted in January 2003 in its original right-to-left orientation. Each volume was a generous 186 pages with color and art touchup supervised by Tetsuo Hara. Vol. 9 arrived in May 2004, ending with chapter 75 (around TV episode 50). 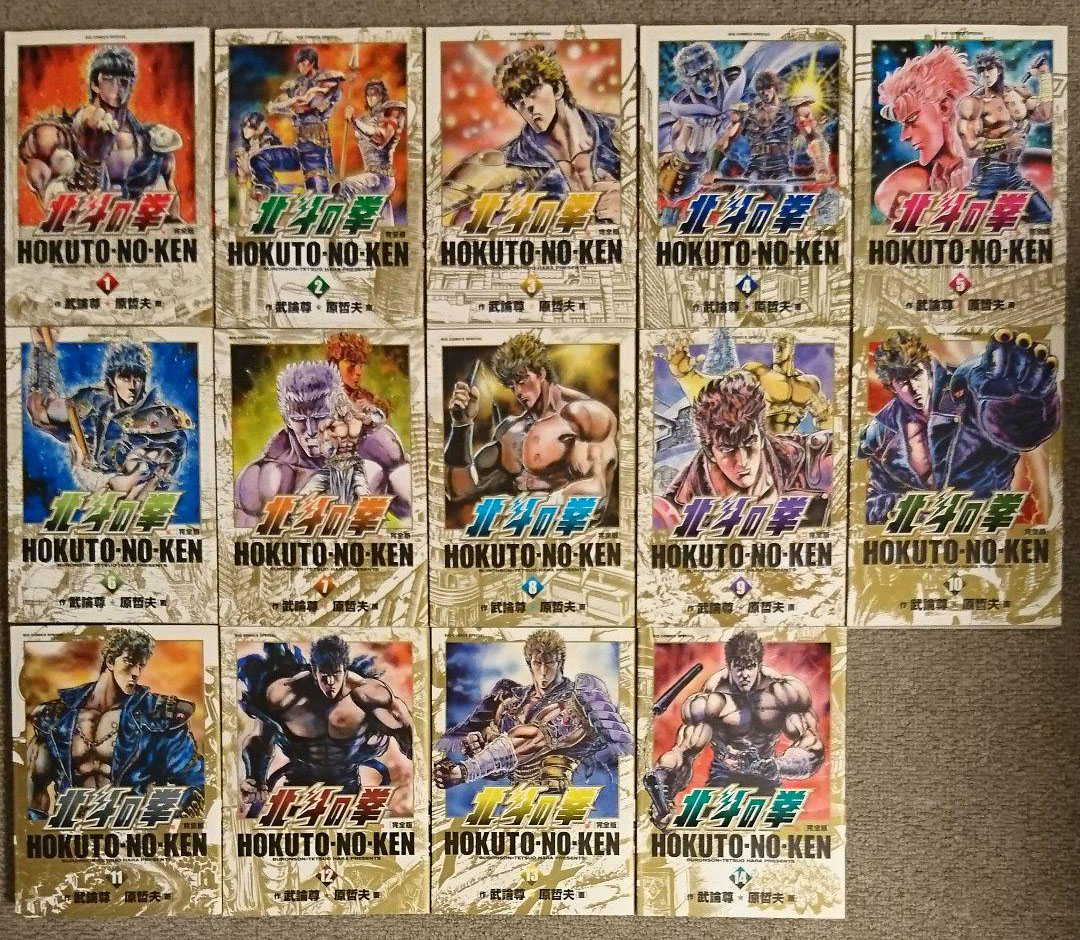 A paperback series published by Shogakukan in 2006 under the Big Comics Selection imprint, the first to include the original water-colored artwork from Weekly Shōnen Jump. It was also released in 27 pay-to-download e-book editions. 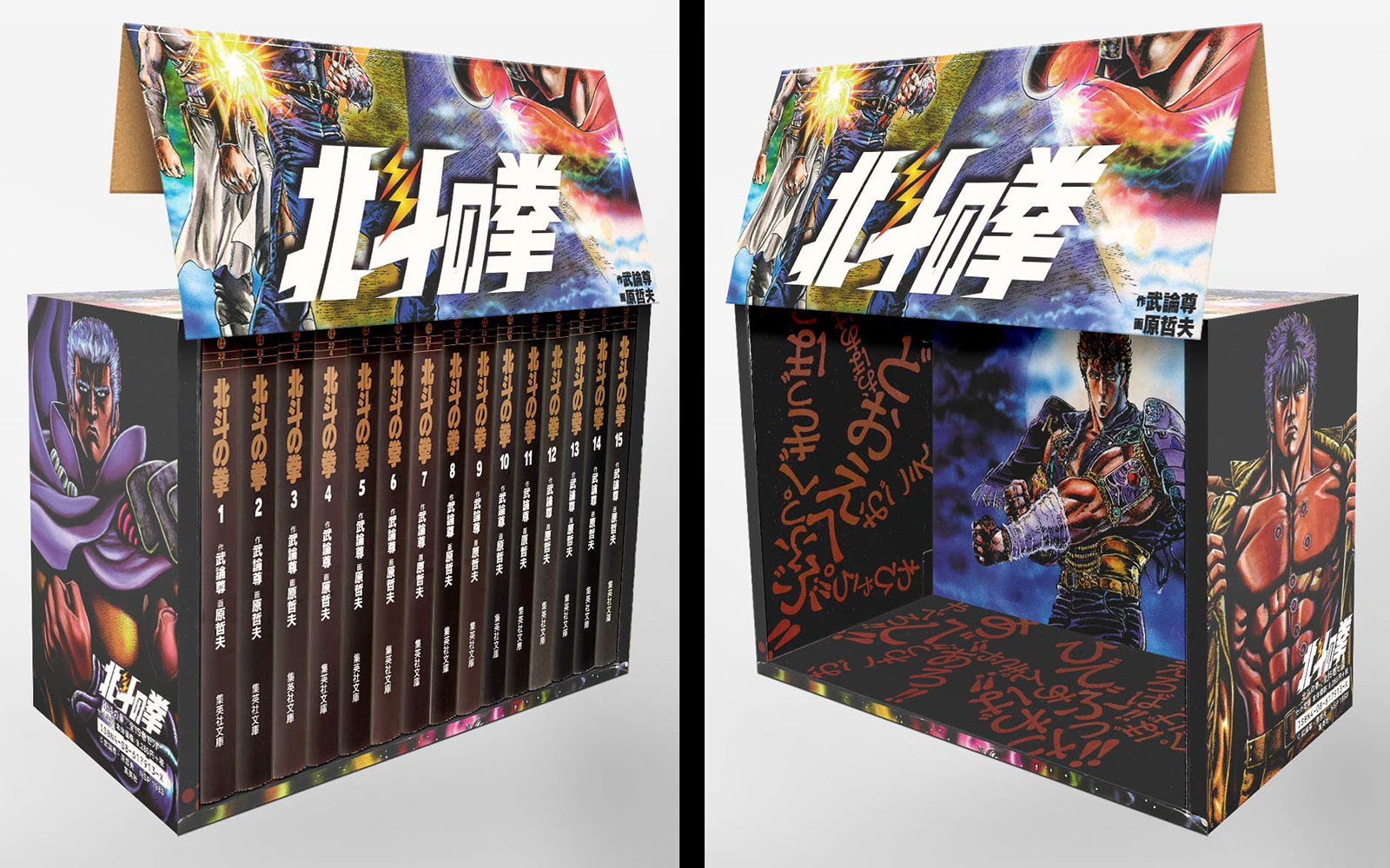 Published by Shueisha in 2006 with a unique color display box.

This FOURTH version of the manga published in a single calendar year was a priced-down edition from Tokuma Shoten, exclusively sold in convenience stores. In an earlier “conbini only” edition, the volumes came bundled with miniature character figures.

This 30th anniversary version was published by Tokuma Shoten (under the Comics Zenon DX imprint) in 18 hardcover volumes from 2013 to 2014. It reproduced all the pages that were originally colored for Shonen Jump with new cover art by Tetsuo Hara. Hara touched up some of the interior art and created an all-new 100 page story to fit in the 10-year gap between the first and second parts of the series. It appeared in Vol. 11. 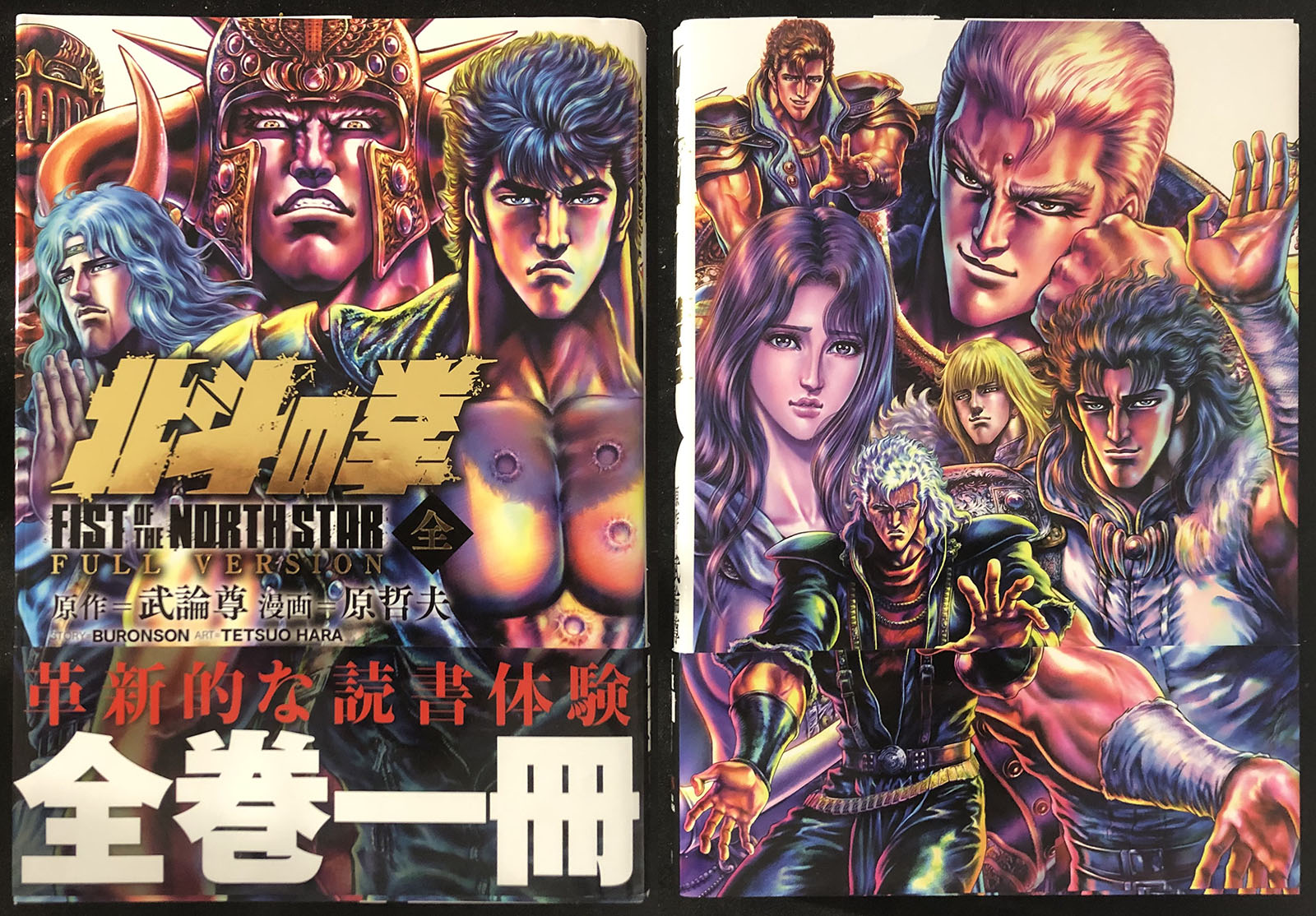 The eOneBook digital e-reader was a crowdfunded device designed to mimic reading a paperback as closely as possible. It is a little larger than a standard DVD case, shaped like a book with a dust cover, and priced at ¥25,000 (approximately $300 after shipping to the US). The Kickstarter campaign was launched September 2017 and achieved 400% of its targeted funding goal in just seven hours. The first batch of devices started shipping from Japan in February 2018. 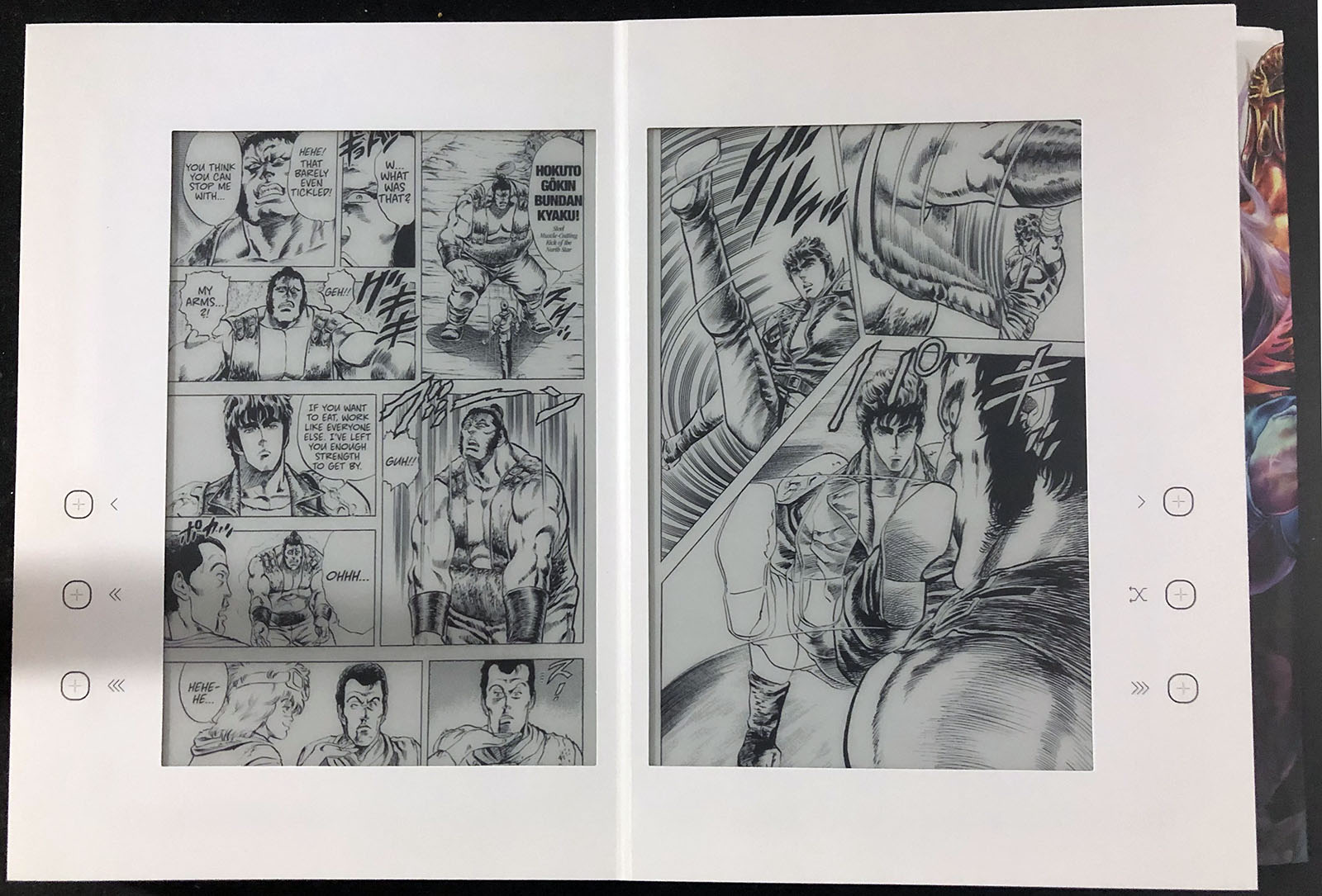 It opens to reveal two battery-powered anti-glare e-ink displays surrounded by vestigial sheets of paper, placed solely so the reader could feel the tactile sensation of thumbing through pages. Buttons on the sides of the screen permitted readers to navigate pages, chapters, and toggle between Japanese and English text. It follows the format of the Ultimate Edition with the bonus chapter, but only displays in black & white.

The quality of the English translation declined in the later volumes, the result of using three completely separate translation services and possibly providing them with no style guide.

The initial release contained ONLY FotNS with no connectivity in order to discourage piracy. The success of the crowdfunding effort was immediately met with an improved (and more expensive) version of the eOneBook that featured an SD card reader for other titles.

Read an article about the e-reader 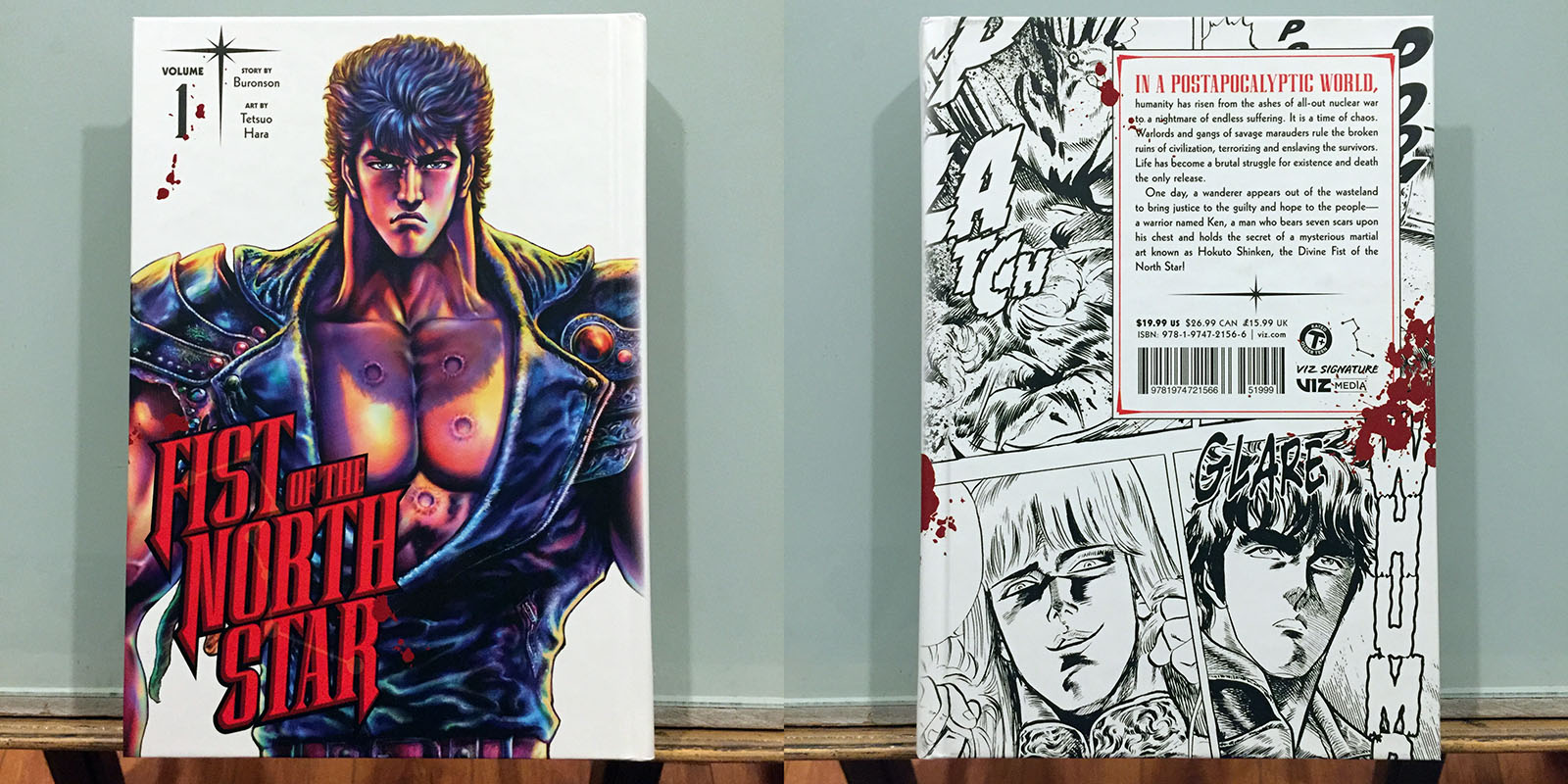 After their previous attempt to bring FotNS to the English-speaking world – and the subsequent try by Raijin – Viz returned with an English edition of the Ultimate Edition. Volume 1 (of 18) was published in June 2021 with Vol. 2 scheduled for September. The translation is different from the e-Reader edition, re-engineered and newly rendered along with the sound effects by Viz. Let’s hope they take it all the way this time.

Order it from Amazon here or RightStuf here.