The main purpose of ArtValt is to air out all the stuff in my archives that never got to see the light of day. This batch comes from my time working on staff at Malibu Comics (1992-94). I ran the art department there, which sounds like it should be the whole comic book company, but it wasn’t. The comics themselves were mainly created by freelancers. We were responsible for lettering, touch-up, graphic design work, and whatever internal art was needed in support of the company.

Sometimes a special project would come from editorial that required full-up illustration work. It got really interesting when sample art was needed for a project the company wanted to license. Proposals were assembled to pitch Malibu as a company to create comics based on someone’s famous IP, and artwork would be included to indicate what the comics could look like.

I was asked to create more than a few of these pieces, none of which were ever seen by the public afterward. Either the proposal didn’t bear fruit, or the project itself didn’t make use of them. Now that I have a means to share them, I’ll explain each project as best as I can recall. 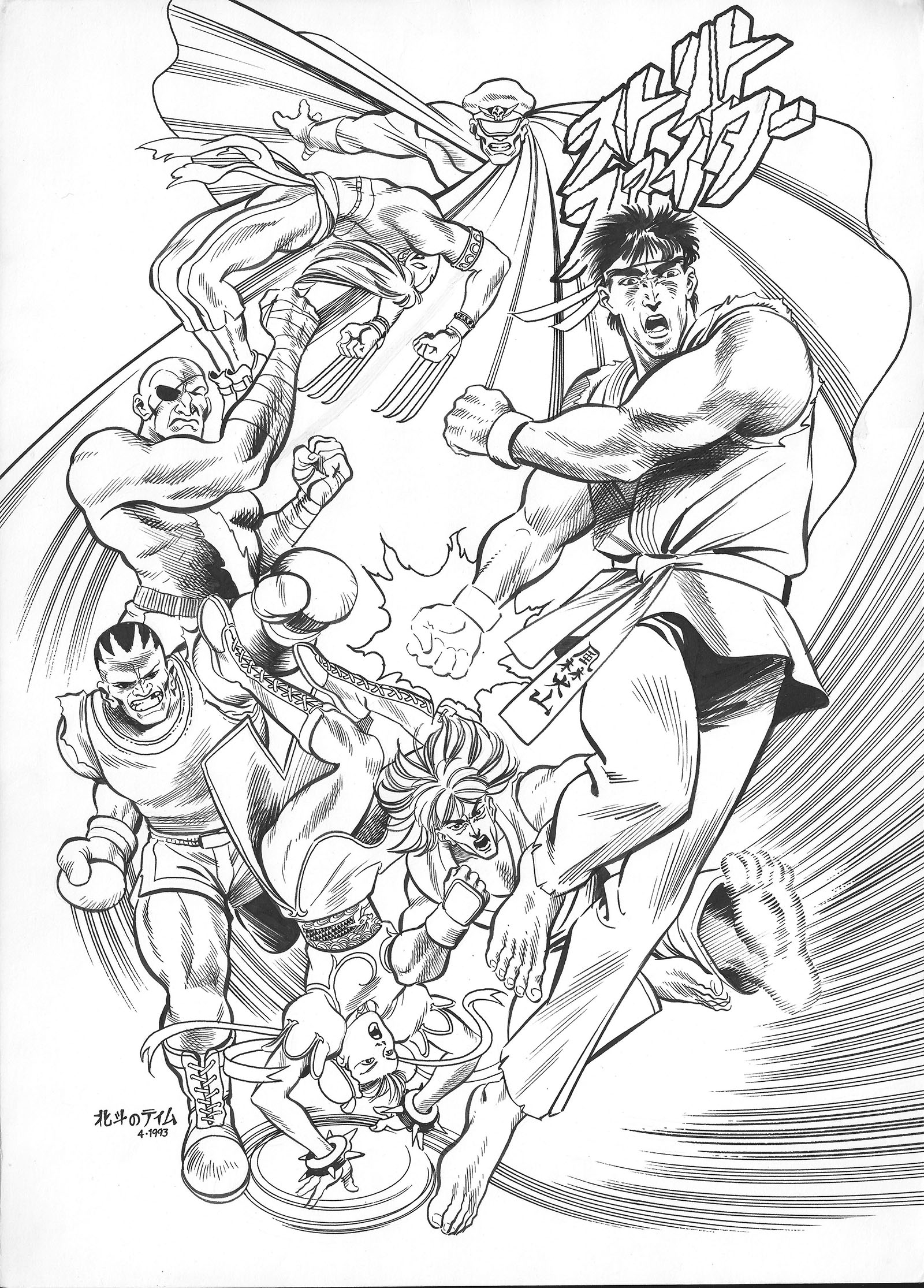 Malibu successfully licensed Street Fighter from Capcom and got three issues published in the summer of ’93, but Capcom wasn’t happy with the art. Either it wasn’t up to their standards or it was simply too “American.” With the deal on the verge of being dropped, an editor came to me and asked if I could use my “manga style” influence to come up with a couple tryout pieces that would get Capcom to reconsider. If it worked out, I’d probably end up drawing the comic. Which sounded pretty cool. 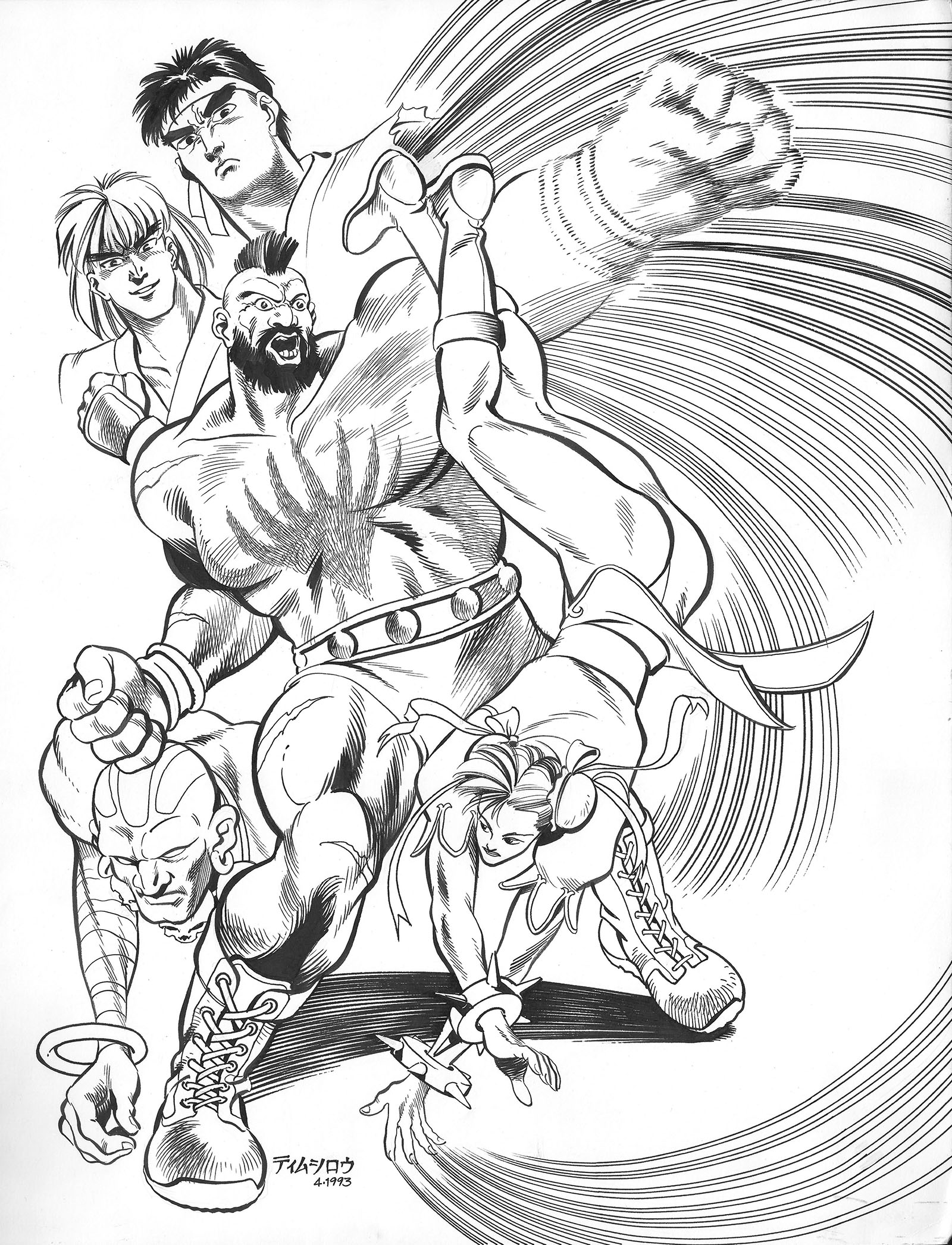 I pulled some reference from a Street Fighter art book, but my main inspiration was the Fist of the North Star manga, which I adored. Since Street Fighter itself began as a pastiche of FotNS, I thought applying that style would be a slam dunk. I signalled this directly with my signatures, “Timshiro” and “Tim of the North Star,” in Japanese. The Malibu editor was happy with the results, and they went through the color department to get star treatment for a Hail Mary pitch to Capcom. 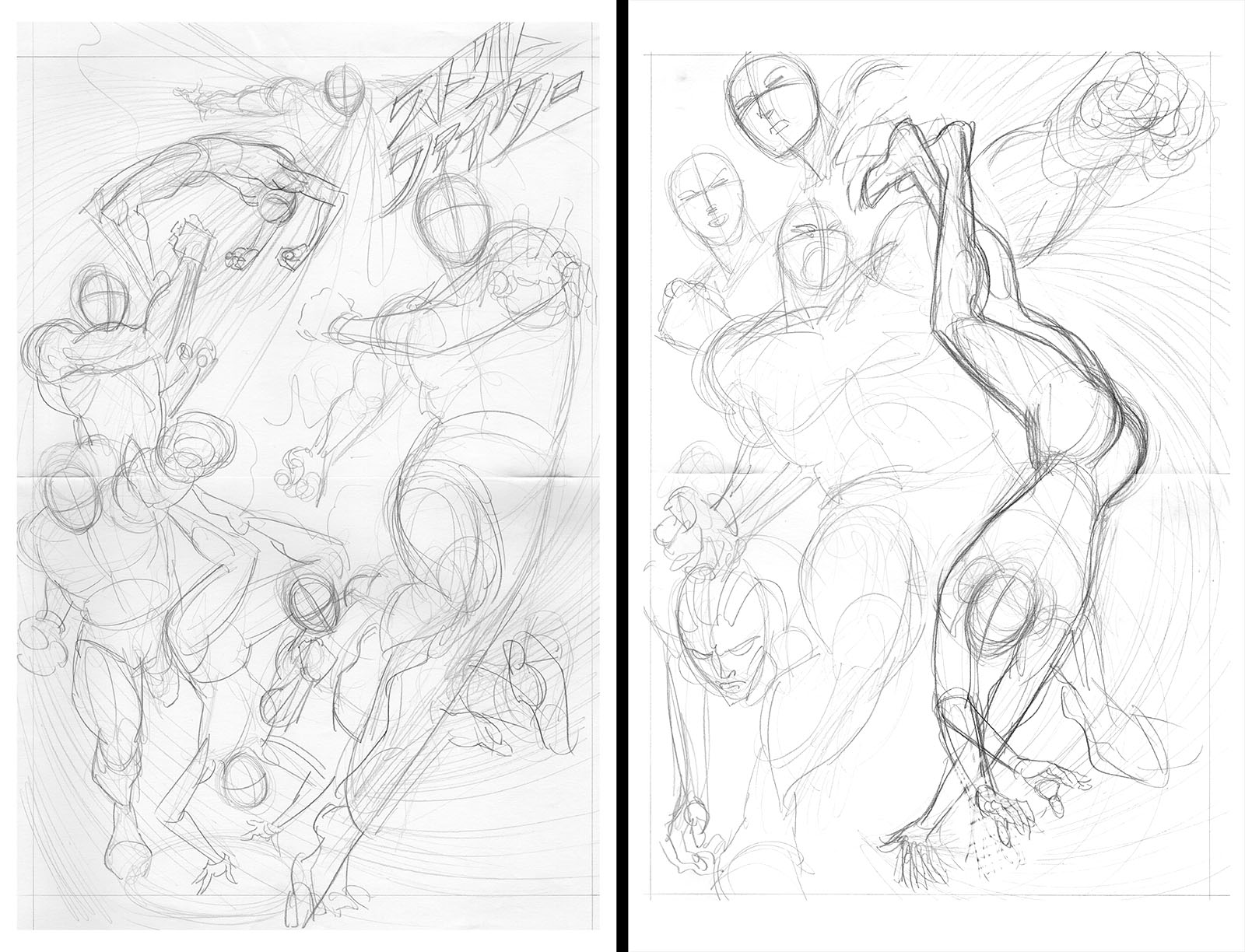 You’ve probably figured out that this was not enough to save the project. But it was a lot of fun drawing them. 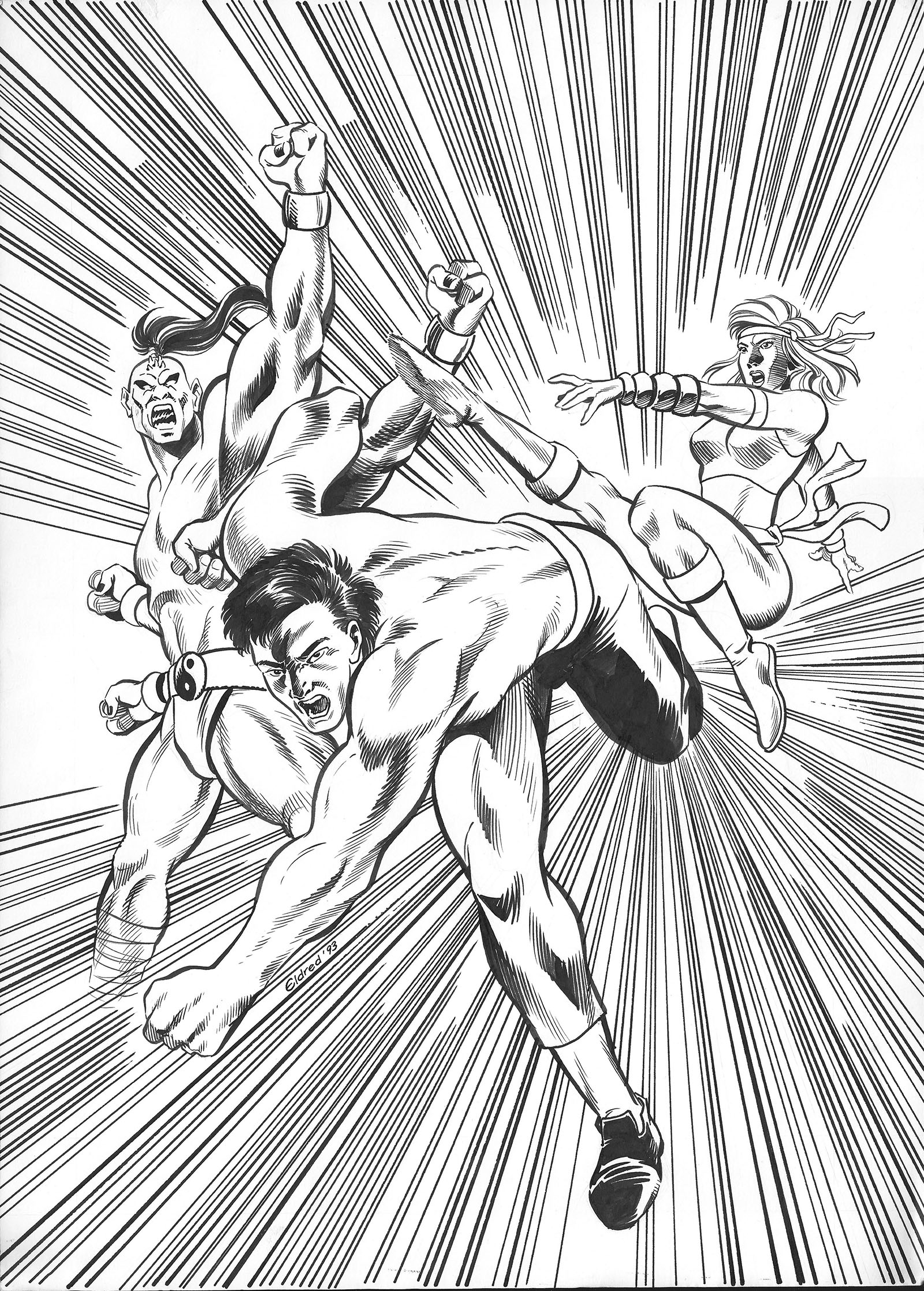 Street Fighter couldn’t be saved, so Malibu’s next move was to go after its closest imitator, Mortal Kombat. They came to me again for pitch art and I channeled the same influences for these two pieces. This time it worked, and they landed the license, but I was not involved in the comic itself. 26 issues were published in ’94 and ’95 but they were ultimately canceled when sales dropped. 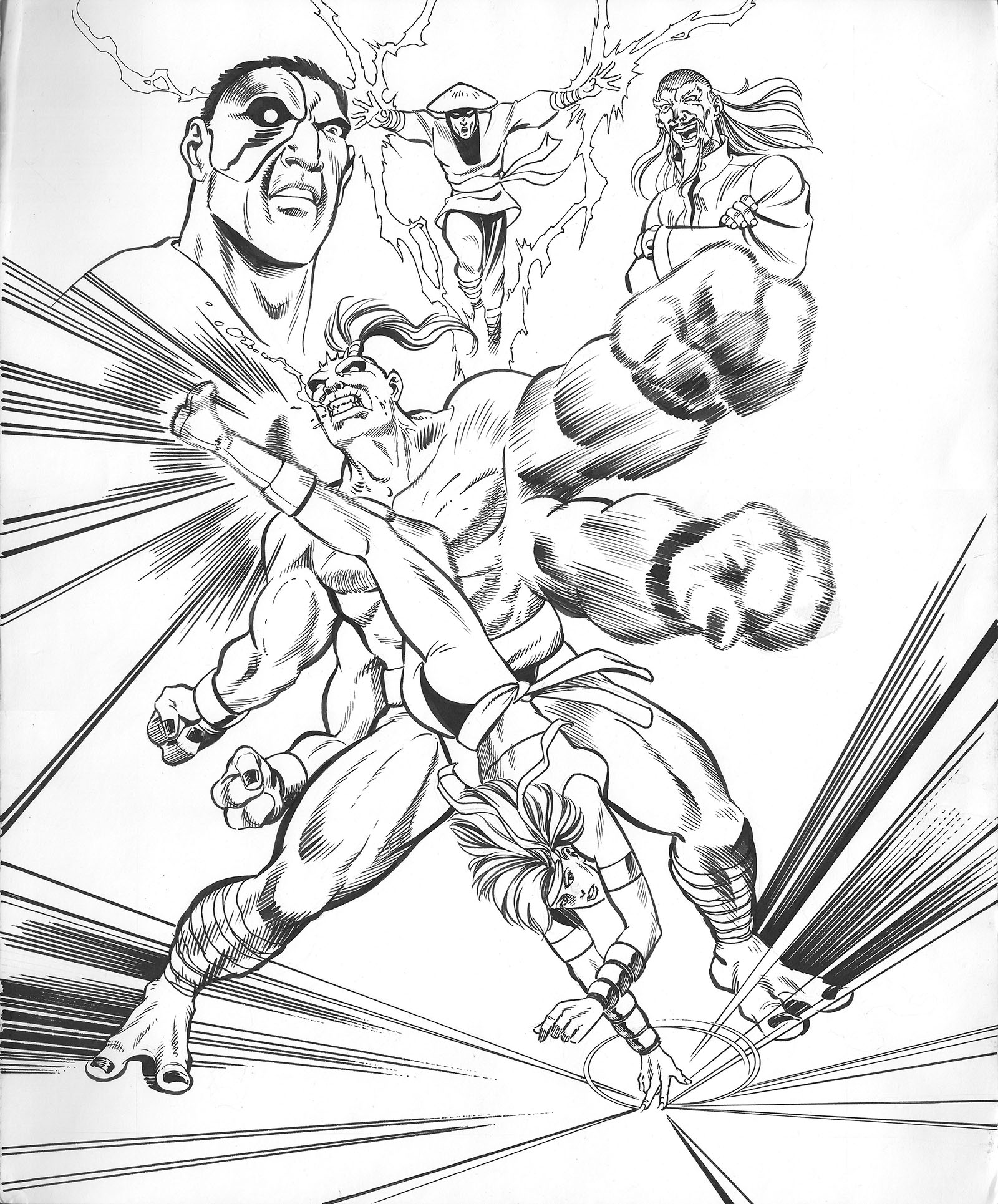 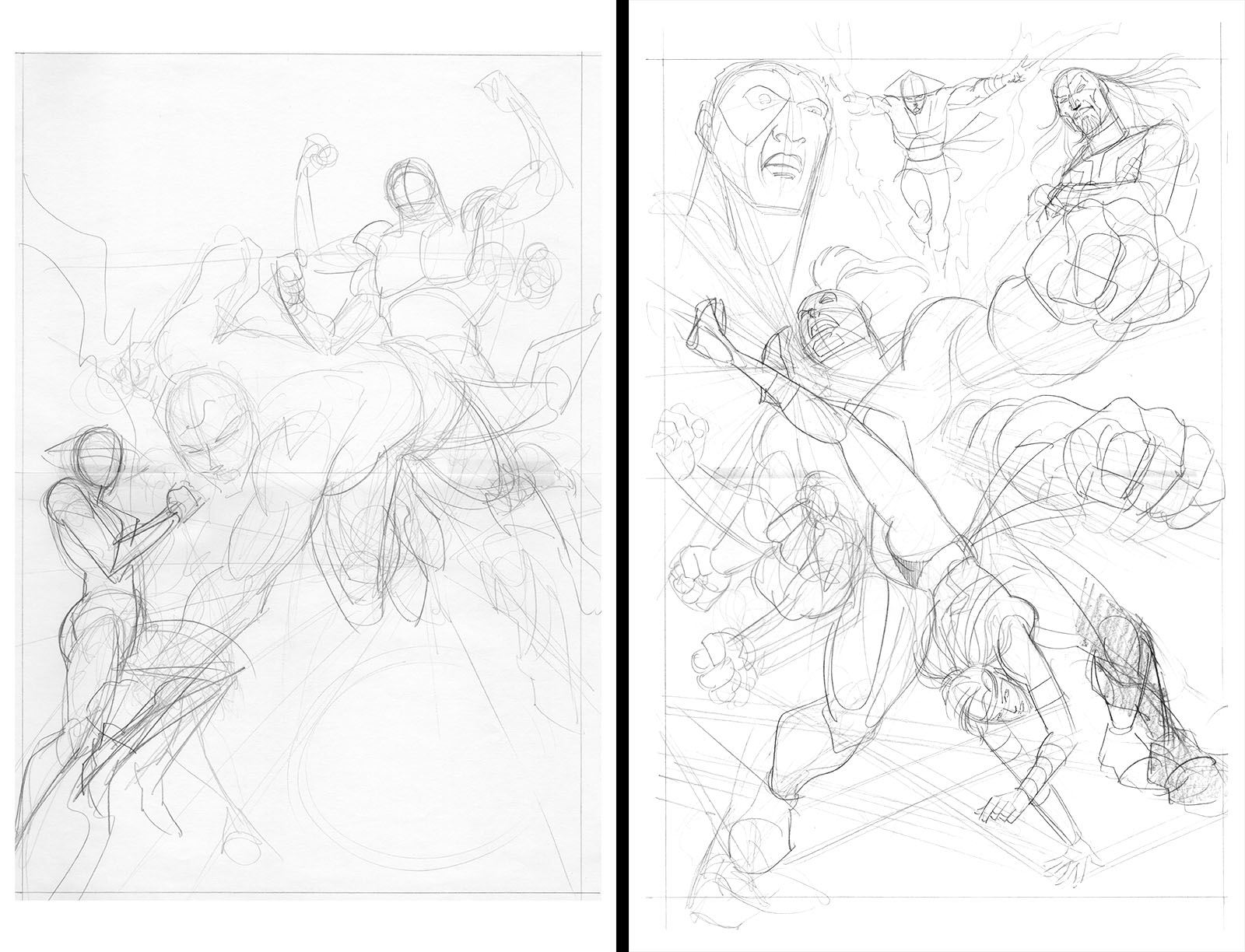 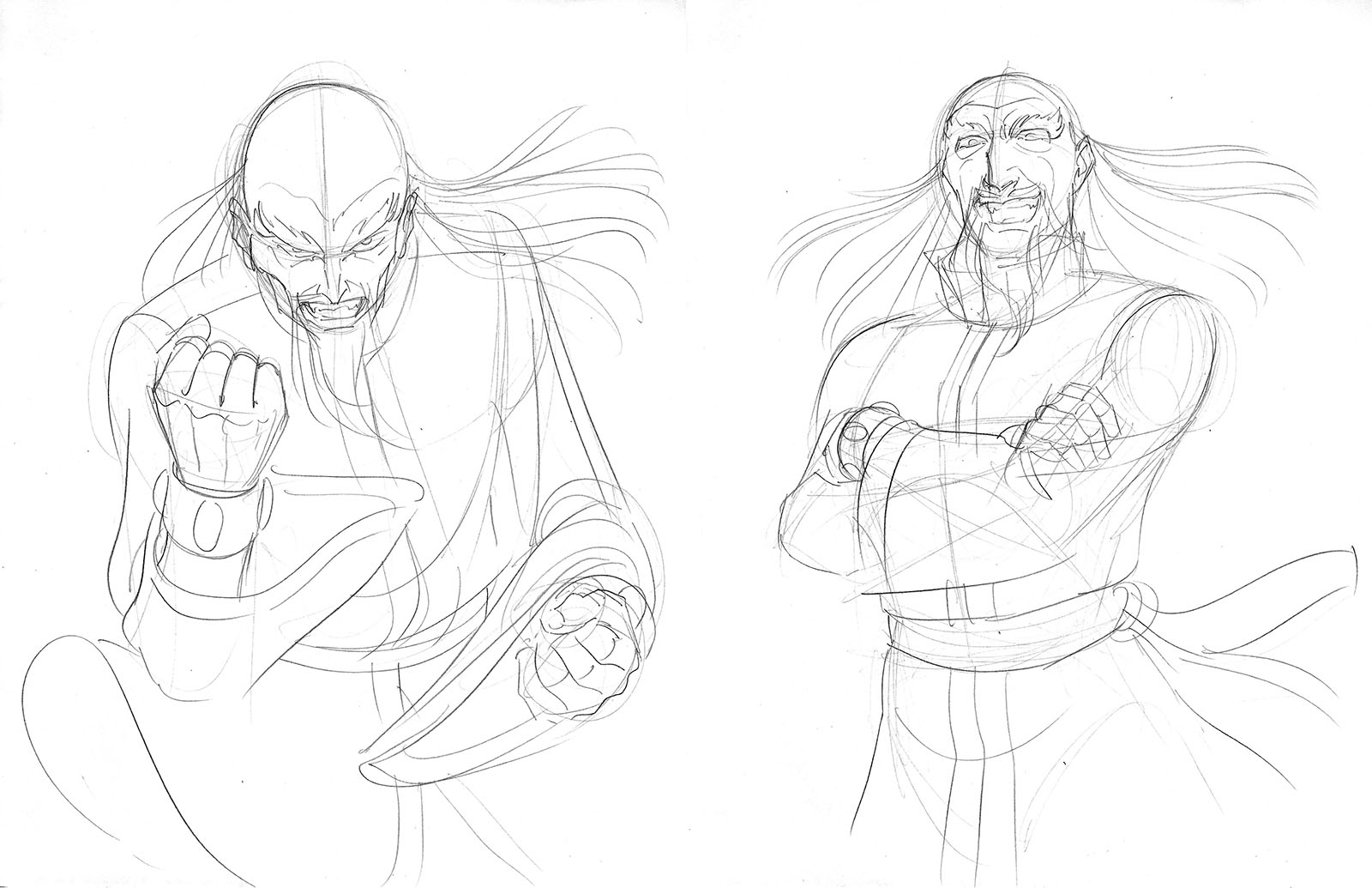 Addendum: years later, Mortal Kombat characters crossed my path again when I was assigned two do two drawings each for two characters. I have no memory of where that assignment came from or what it was for, exactly. In fact, I totally forgot about it until I found these drawings in my files. But at least I had a little practice to fall back on. 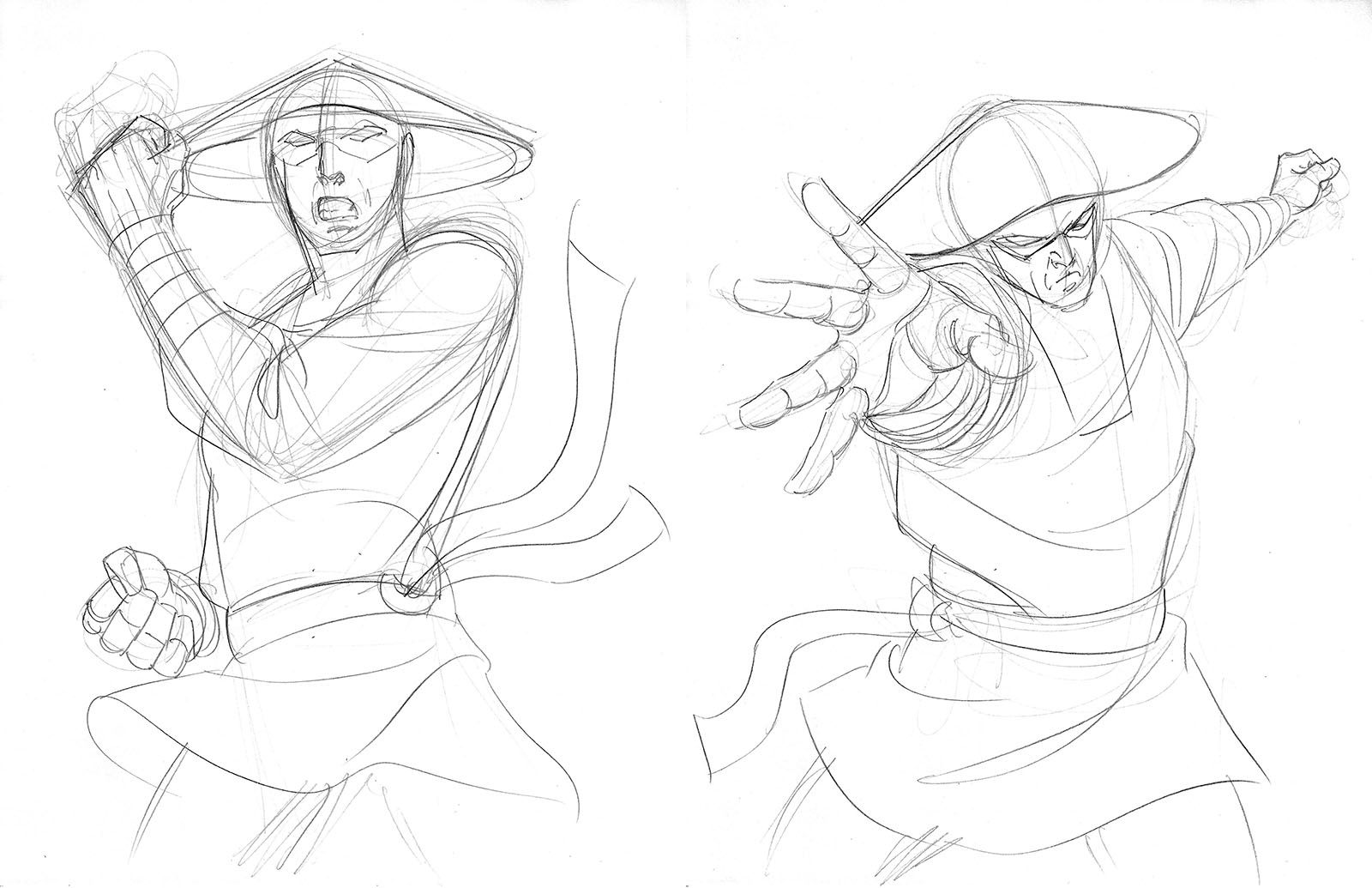 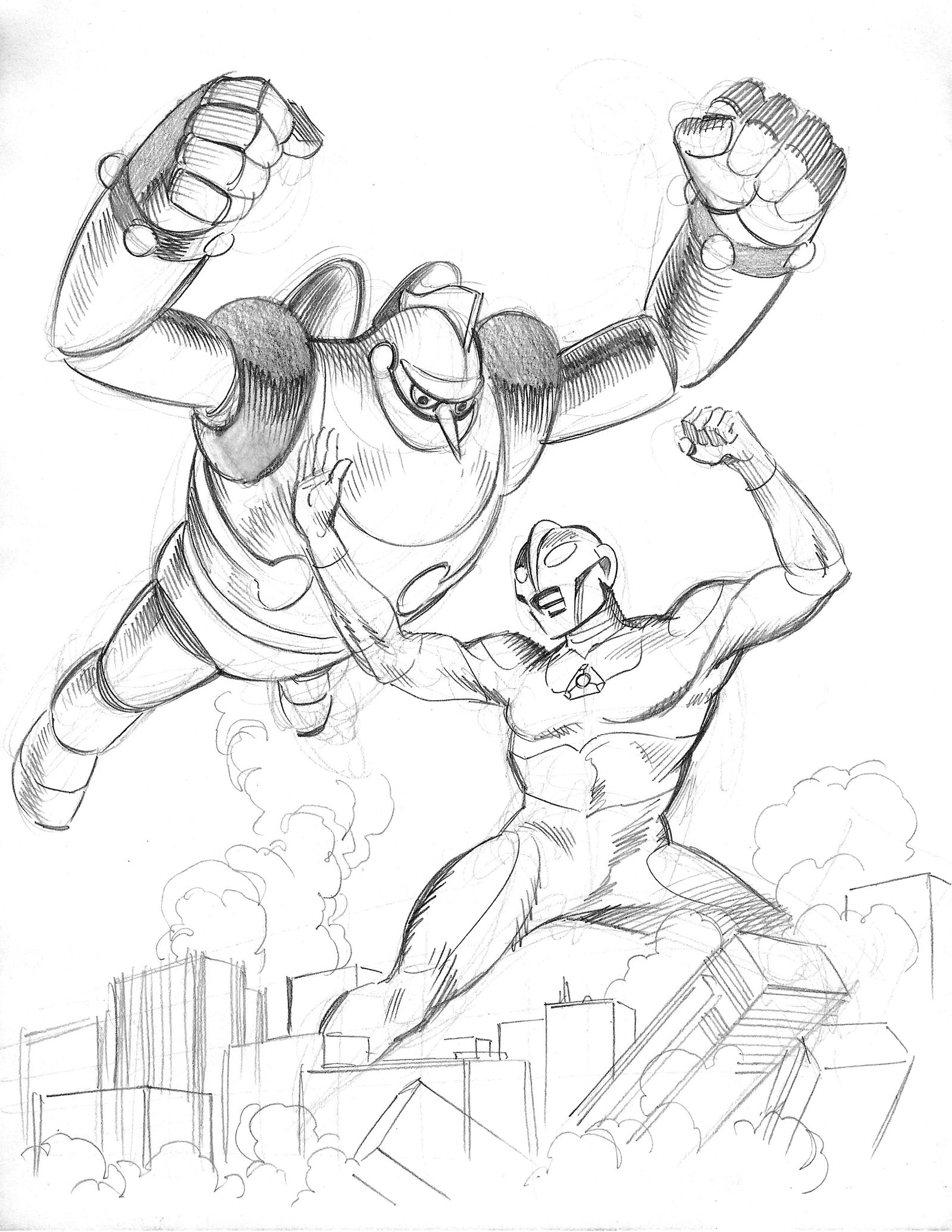 In 1993/94 Harvey Comics caused a stir when they published 8 issues of an Ultraman comic book series before going bankrupt and closing down after over 50 years of publishing. Despite Harvey’s sorry fate, their Ultracomics did pretty well, and one of the crafty Malibu editors came up with an idea to jump on the bandwagon. Around the same time, Malibu had the license to Gigantor, and made it the focal point of an anthology title called Eternity Triple Action. (I created one of the comics for that book, which I’ll get to at another time.) The idea was…CROSSOVER! What if Malibu teamed up with Harvey to get these two giants into a single story? 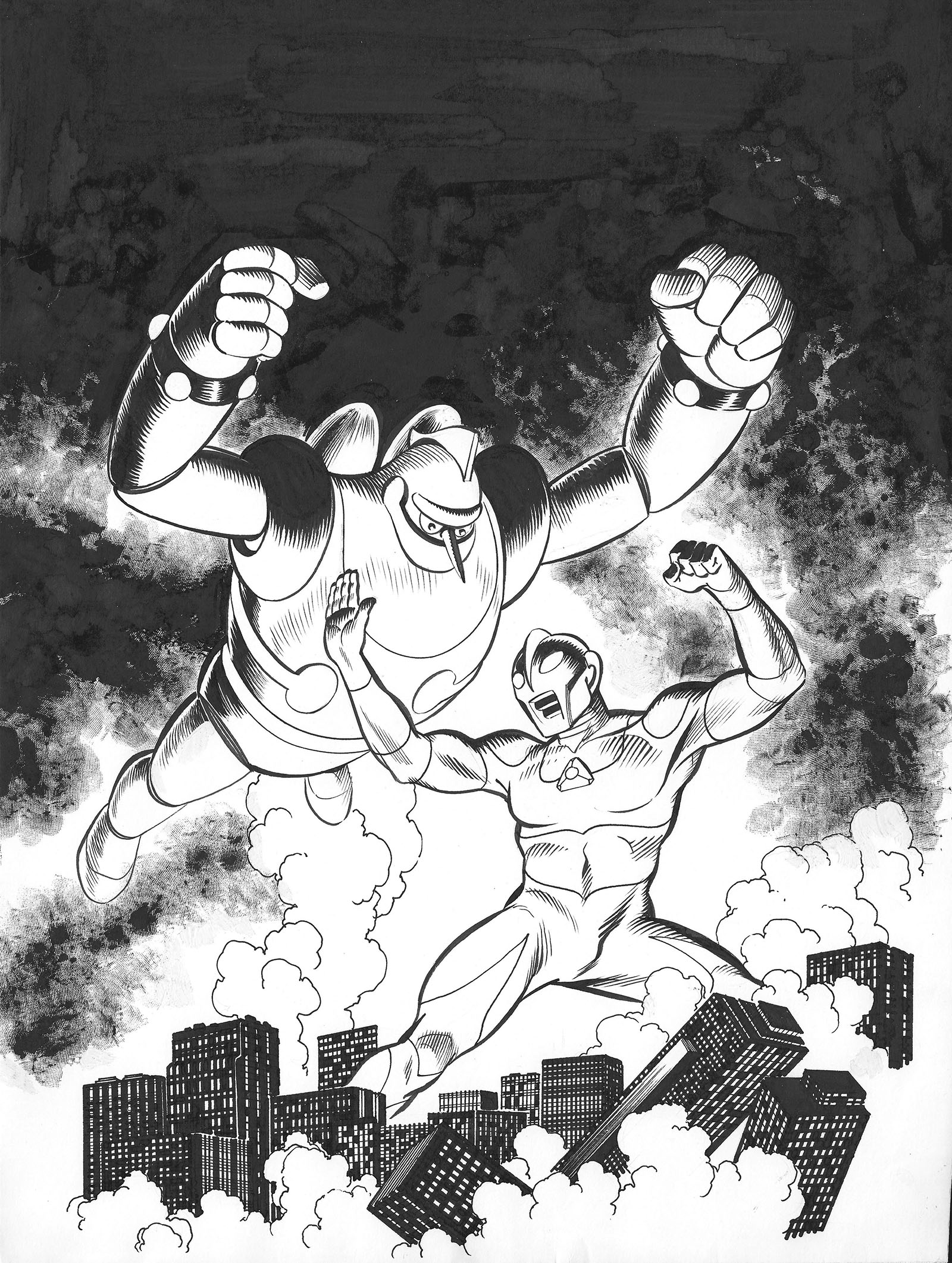 Once again, since I was the resident anime/manga guy, they asked me to create a piece to pitch the idea to Harvey. Nobody had a concept for the story yet, so I came up with one on the fly… 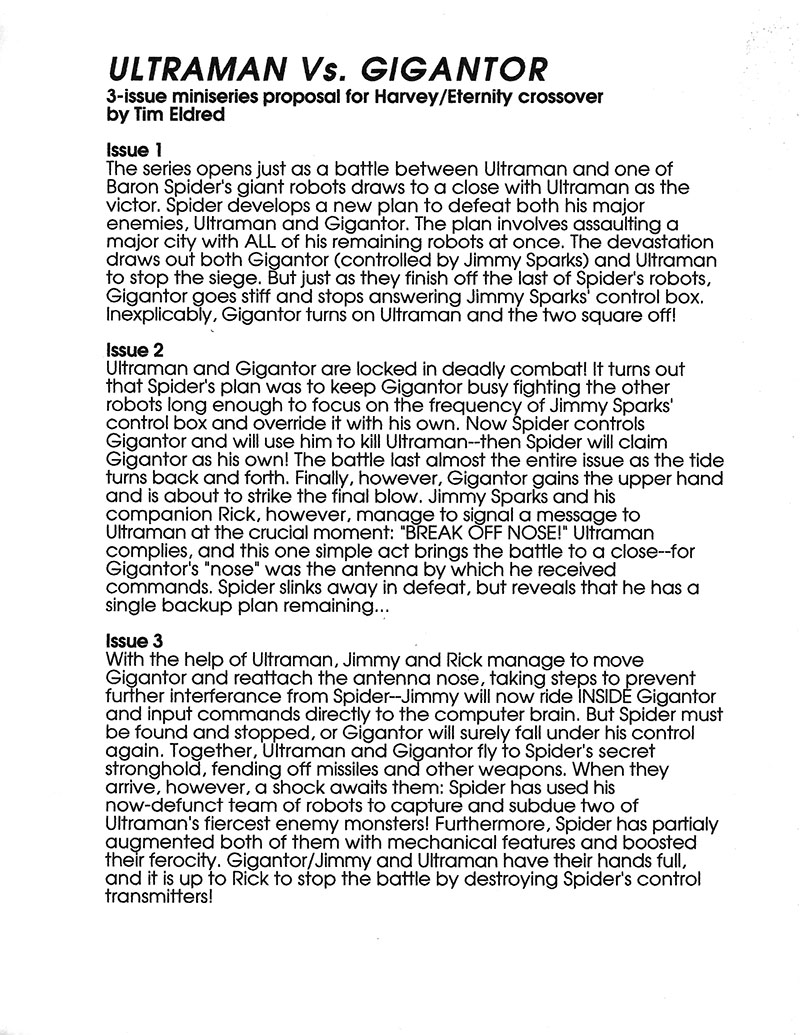 To sweeten the pot, I also came up with a killer tag line… 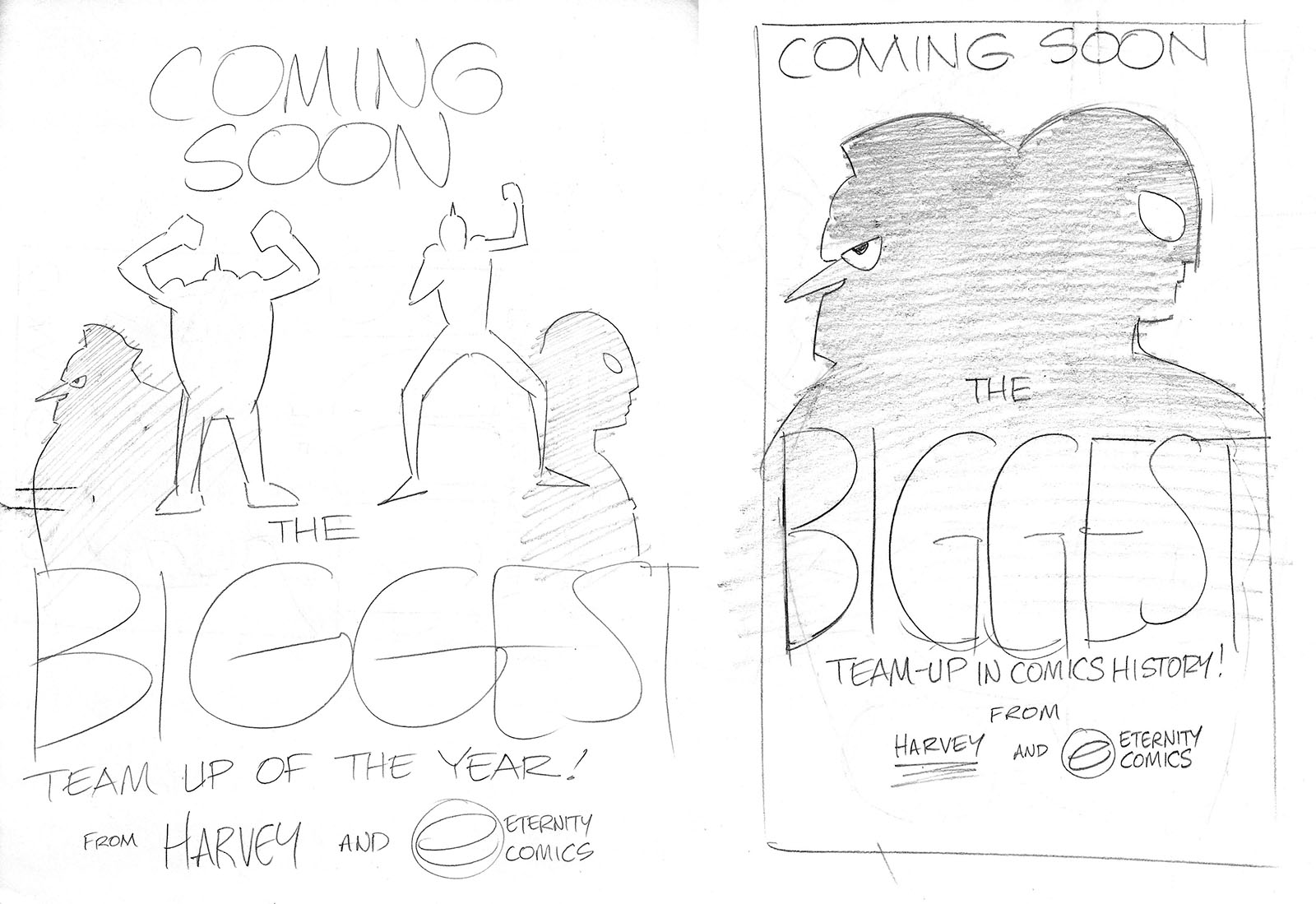 Ultimately, it went nowhere. I’m guessing Harvey was in the weeds by that time and wasn’t able to commit. But I still got to draw the characters together, maybe for the first time in history.

I was never a huge Star Trek guy, but if you’re involved in the entertainment biz, Star Trek comes calling sooner or later. Malibu landed the license for Deep Space Nine and launched it as a comic series in the summer of 1993. It did pretty well, lasting for 32 issues. I even got to draw two of them, which I’ll cover here someday.

When Malibu got the word that another Star Trek series was in development, to be called Voyager, the editors decided to put another pitch together and see if they could double up. Nobody knew anything but the series title, so when they asked me to do a couple samples, the order was simply, “whatever you like.” 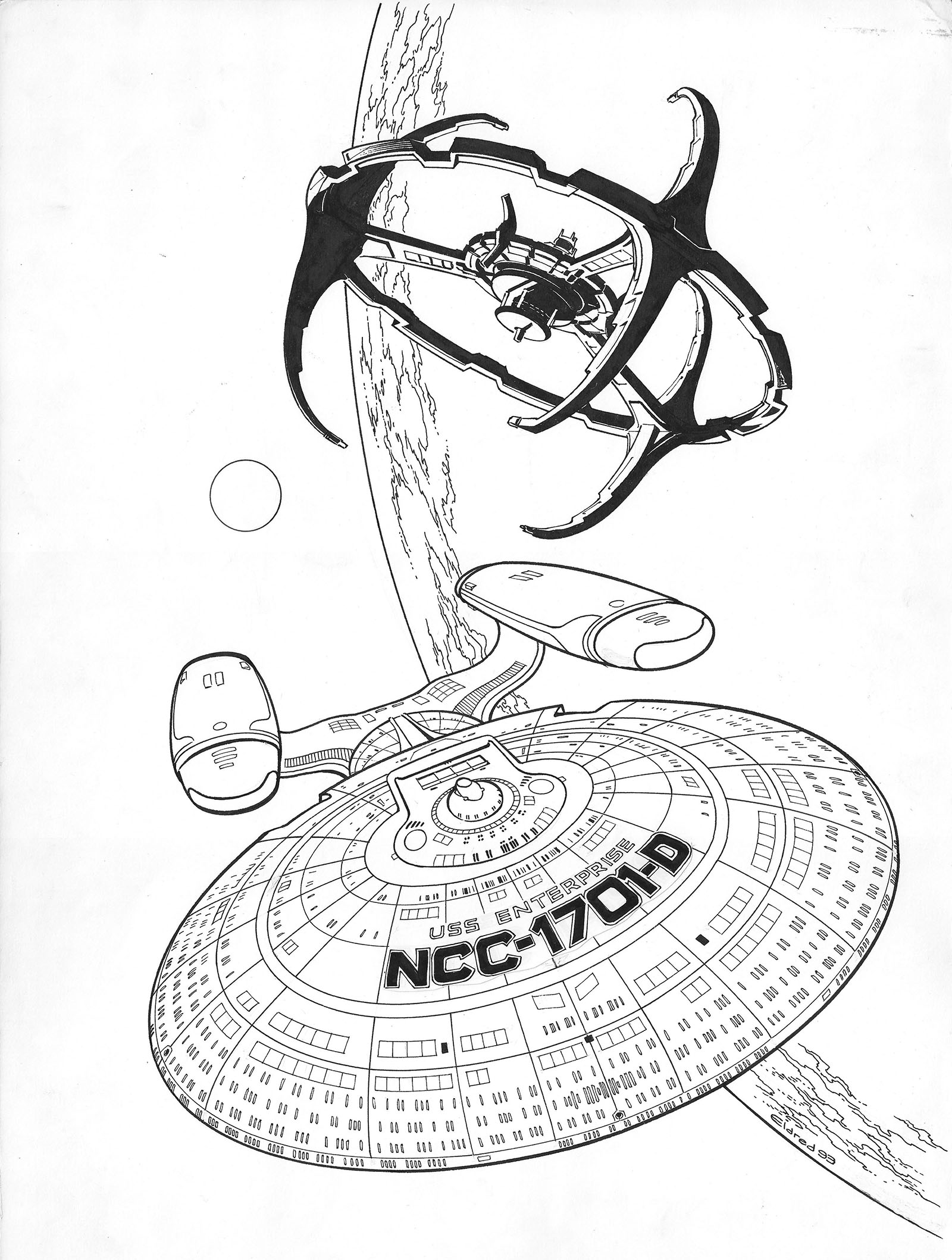 I mainly like space hardware, so I thought it would be symbolic to do a drawing of a ship named Voyager departing from Deep Space Nine. I didn’t know what it would look like, so I just drew the Enterprise D and put a different name on it. With some dramatic flair, I gave it the number NCC-1492. Later, when this turned out to be completely wrong, I pasted the Enterprise ID over it and turned this into a portfolio piece. 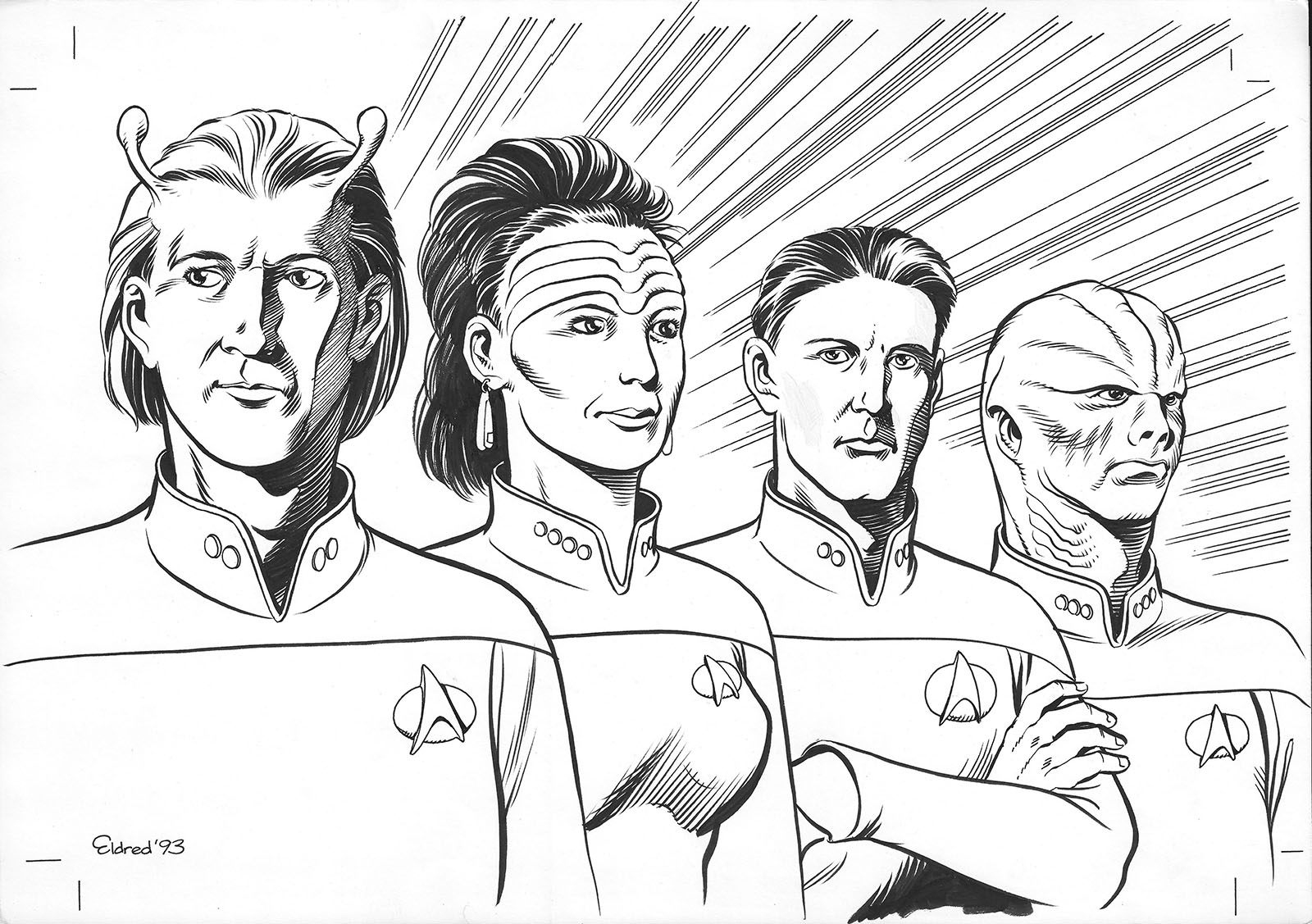 I thought it would be important to put characters in the second drawing, so I cast my own officers, only one of which was a human. From left, that’s Michael Ontkean, Loretta Swit, and Kyle MacLachlan. The guy at far right could have been anyone. Don’t ask me to explain anything else about them, they were simply cobbled together from Trek ref that happened to be on hand. If this inspires anyone to write fanfic, go nuts. 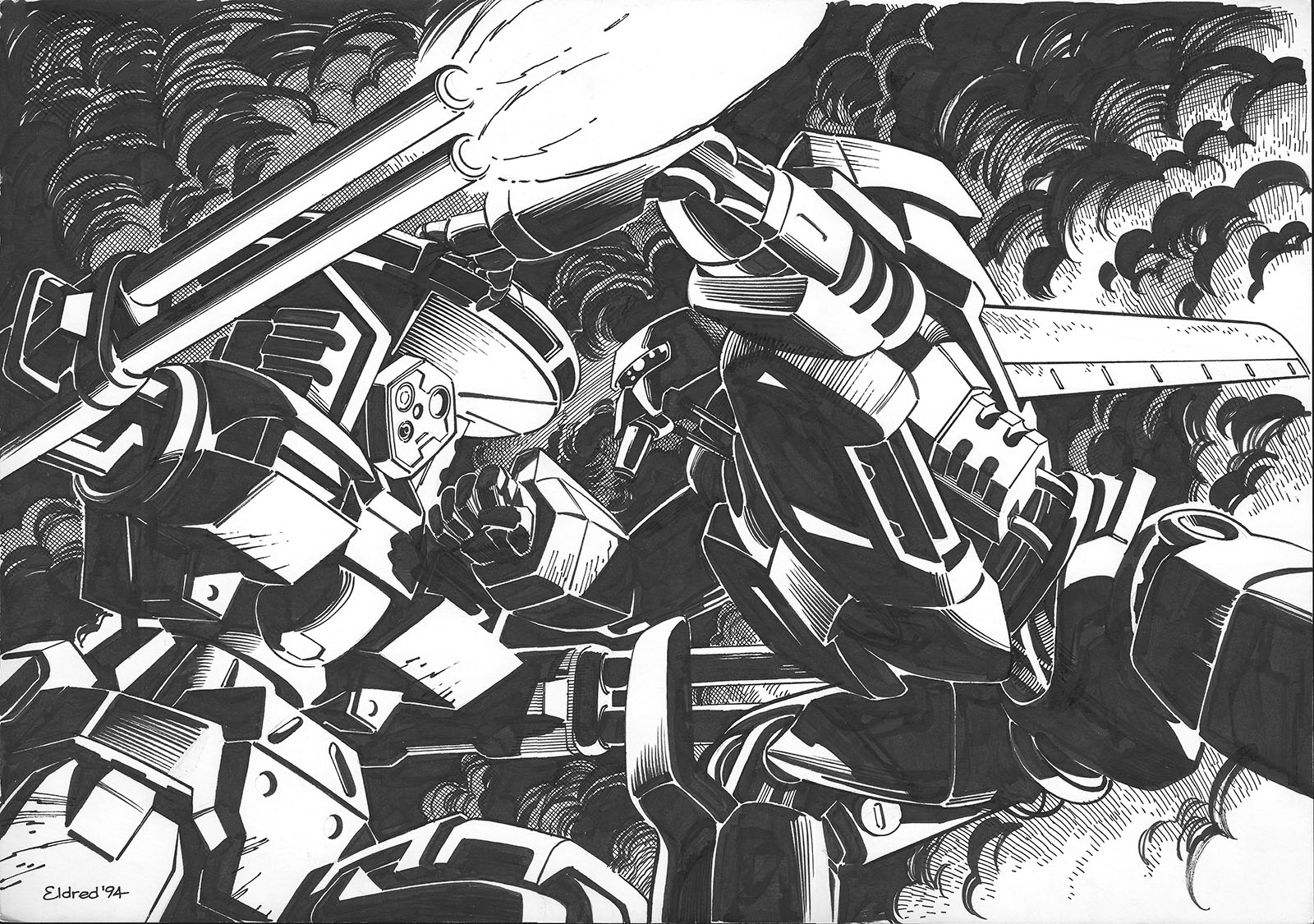 This started out in 1984 as a military science-fiction board game by FASA that rode on the popularity of mecha anime such as Gundam and Dougram. Over the next decade it expanded into a franchise with multiple games, books, and ultimately a TV cartoon that got a syndicated release in 1994. (More background here.) Malibu saw another opportunity to acquire a comic book license, and since the game had anime DNA, I was asked to create samples. Looking through some of the game’s sourcebooks, I landed on a couple of robot designs I really liked and made them my subjects. 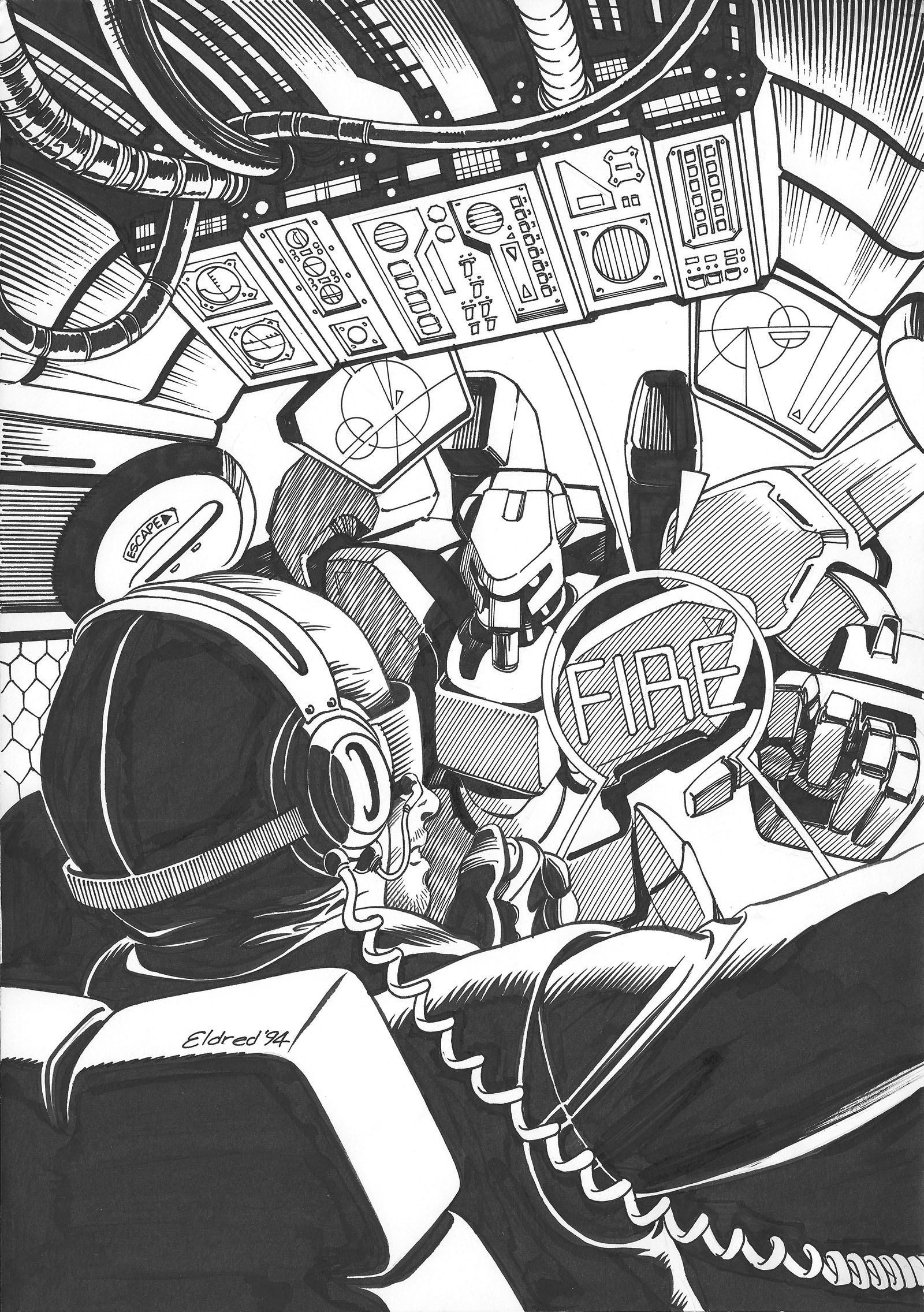 Then came an interesting twist in the story. After I finished these two pieces, I was told that they wouldn’t be appropriate because the designs I based them on were created by a Japanese artist, and they weren’t considered part of the “main catalog” or something like that. So I needed to do two more samples with “approved” mecha.

Here’s the thing; I picked the first two designs because they looked WAY better than anything else in the lineup. And no wonder; the Japanese artist was a professional mecha designer on the level of Shoji Kawamori (perhaps even Kawamori himself). The approved robots, by contrast, were home-grown. Unsurprisingly, they looked like the work of someone trying to imitate a style without true knowledge of the craft.

Anyway, back into the fray I went, gritting my teeth while doing my best to make lame robots look less lame. 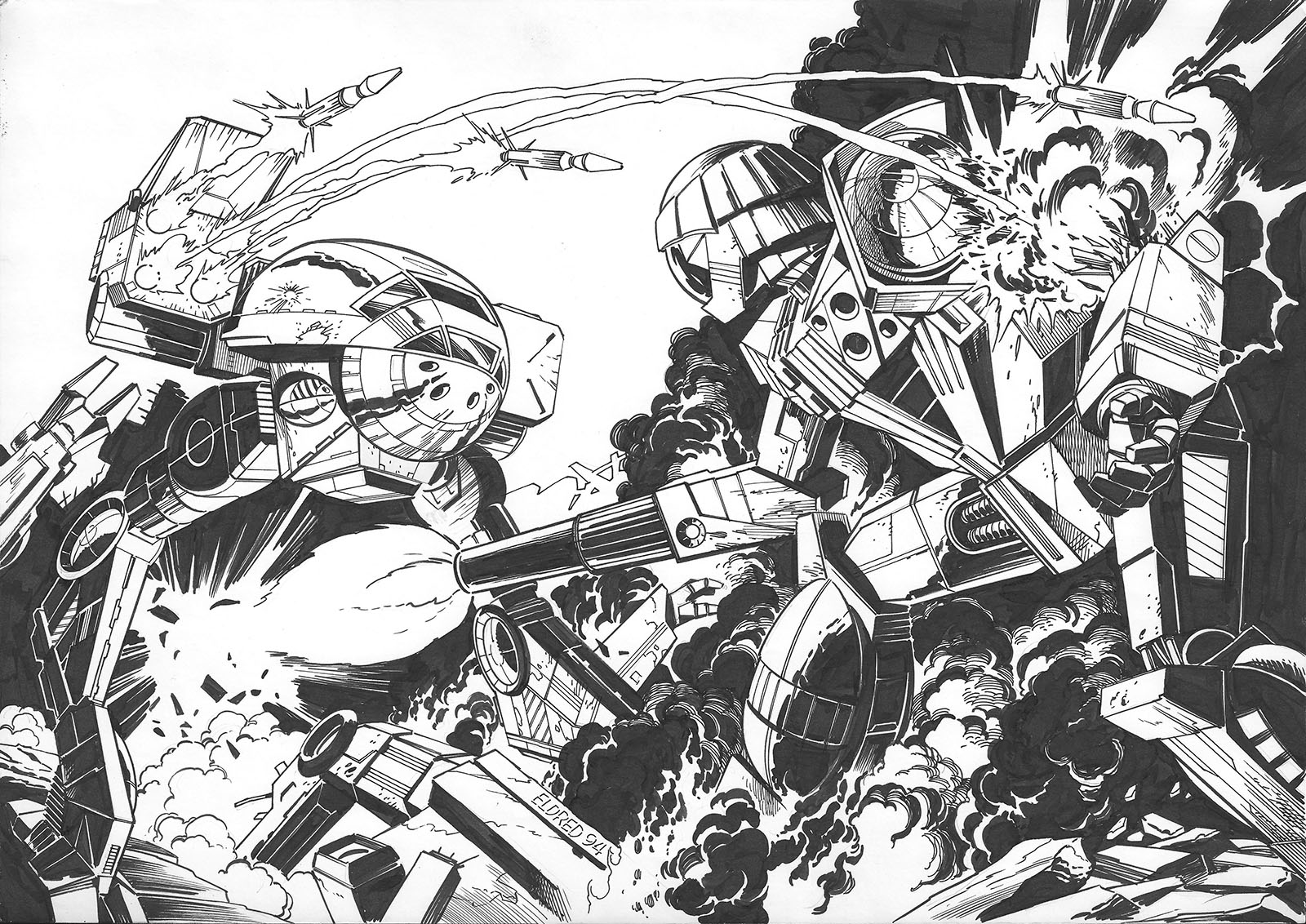 This particular project had a successful outcome; Malibu got the Battletech license and launched the comic later in 1994. I was hired to pencil it, and it turned out to be one of the least enjoyable assignments of my comics career. Basically, it was the project that made me want to stop working for Malibu altogether.

It turned out to be the right time for us to go our separate ways; the Battletech TV series was an unwatchable mess, and Malibu would be wiped off the map (by larger factors) in less than a year. Obviously, there’s a lot more story to tell. My part of it will be told as it becomes relevant in future articles. To learn more right now, check out the Wikipedia page on Malibu here. 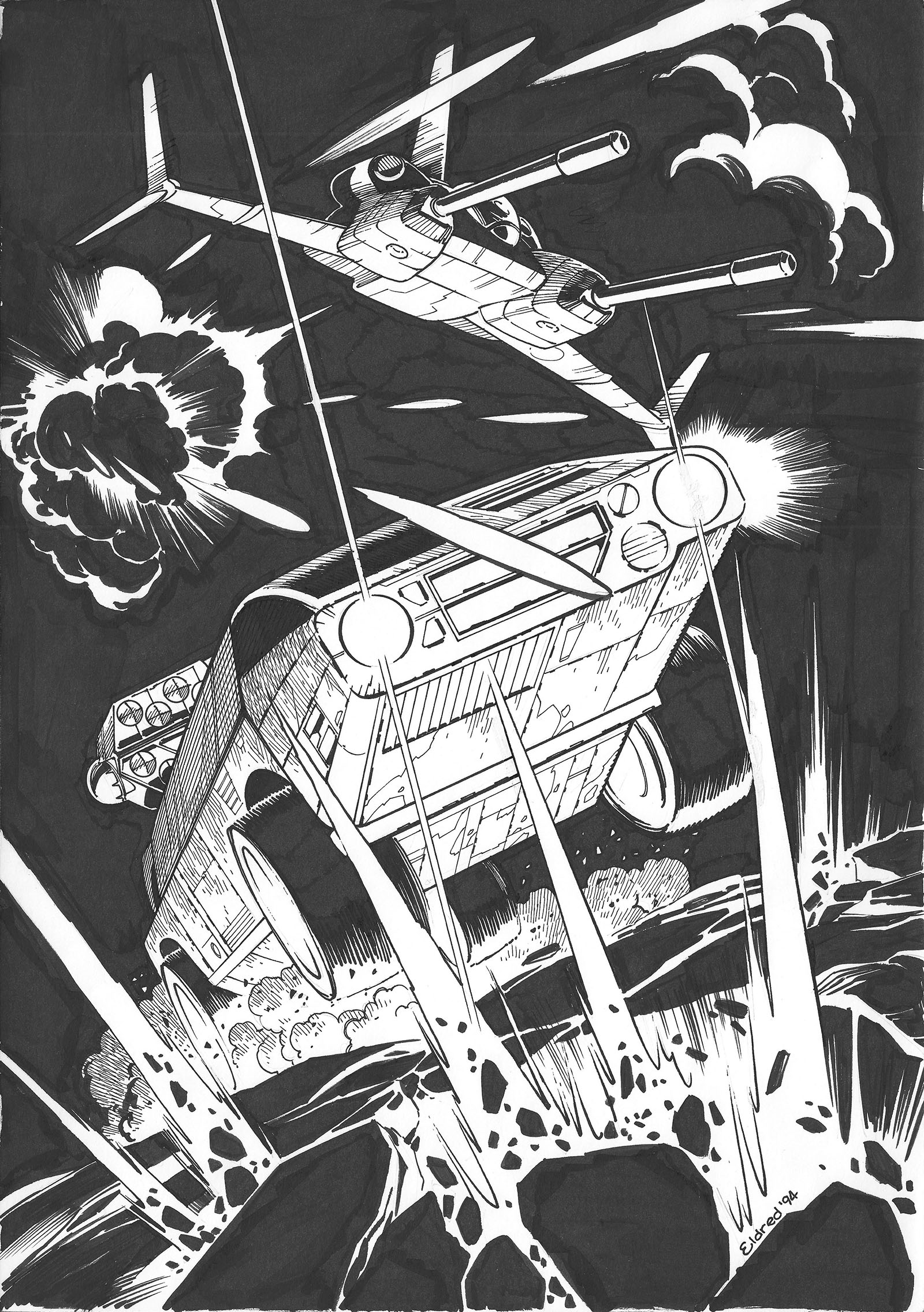