And here we are for the final round of cartoons I drew during my time at the weekly Cadence newspaper in East Grand Rapids, Michigan. I was 20/21 at the time and really straining to get out of there. The week-to-week grind was expected, but as I went into my third year of it I was seeing a lot of the same annual drudgery over and over. Try working in any form of advertising for just one Christmas season, and you’ll never want to do it again. It made me feel like I’d gone as far as I could in that career.

The cartoons, crazy as they were, were the best part of the weekly cycle because – even though they were conceived by the editor-in-chief – they were the only part of my job that used the most creative part of my brain. I felt strongly that the correct long-term career for me was one that would use it more often. It would take another three years to get that career going, but it’s been non-stop ever since. 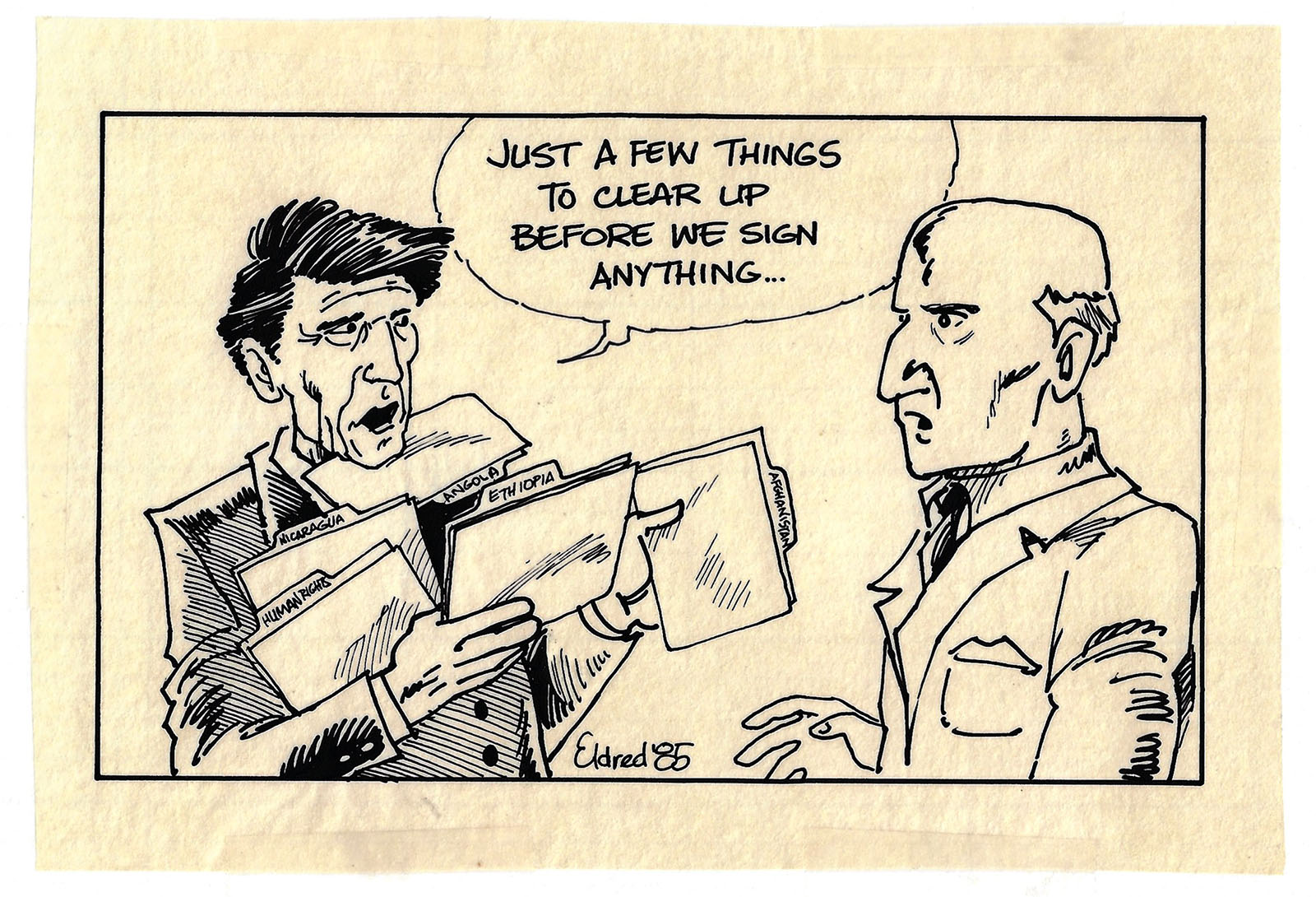 Ronald Reagan and Mikhail Gorbachev. I gotta admit, the end of the Cold War was quite a moment. The spectre of Nuclear apocalypse was only fun in the movies. 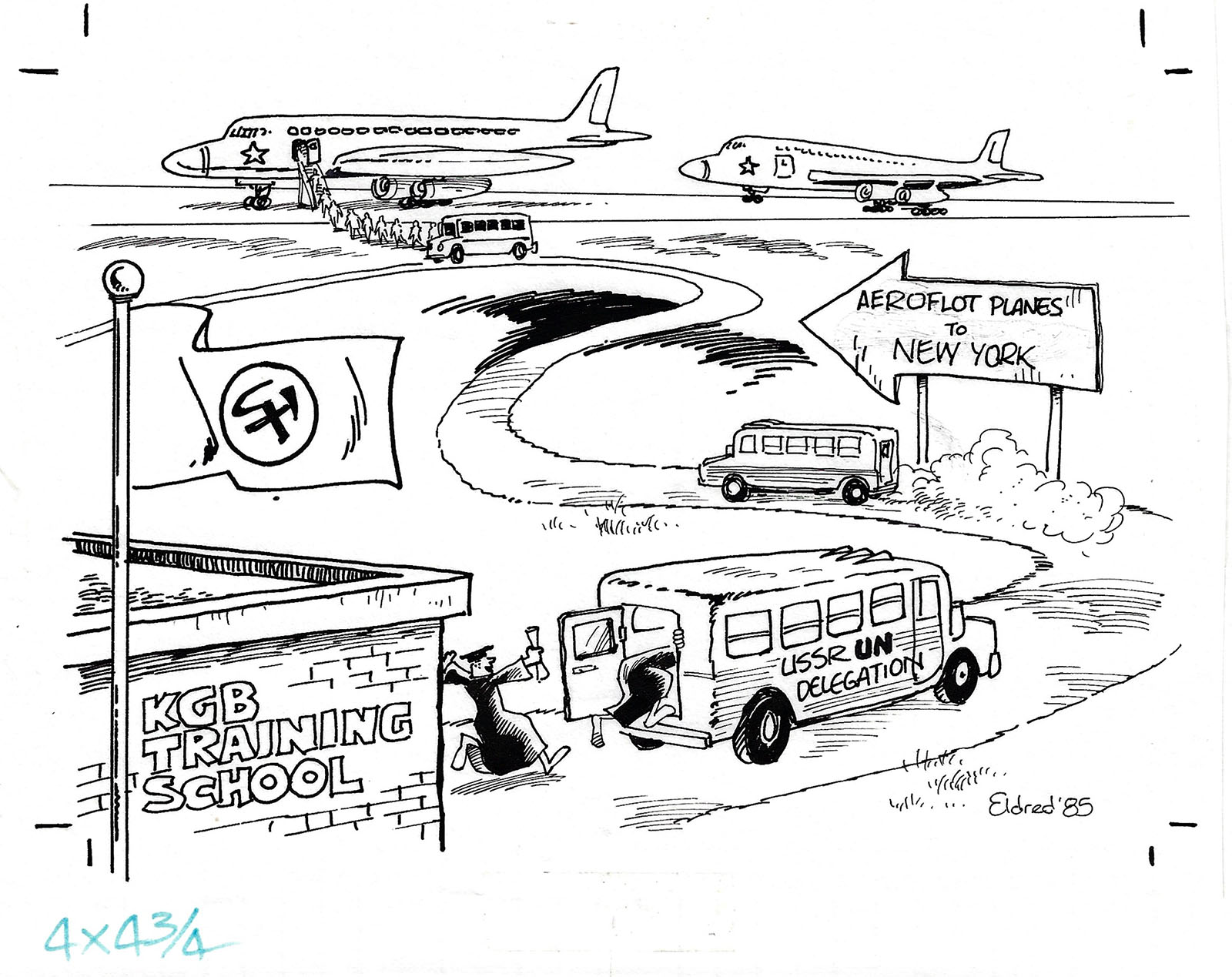 Our editor-in-chief was pretty concerned about Russians, in case it’s not clear. 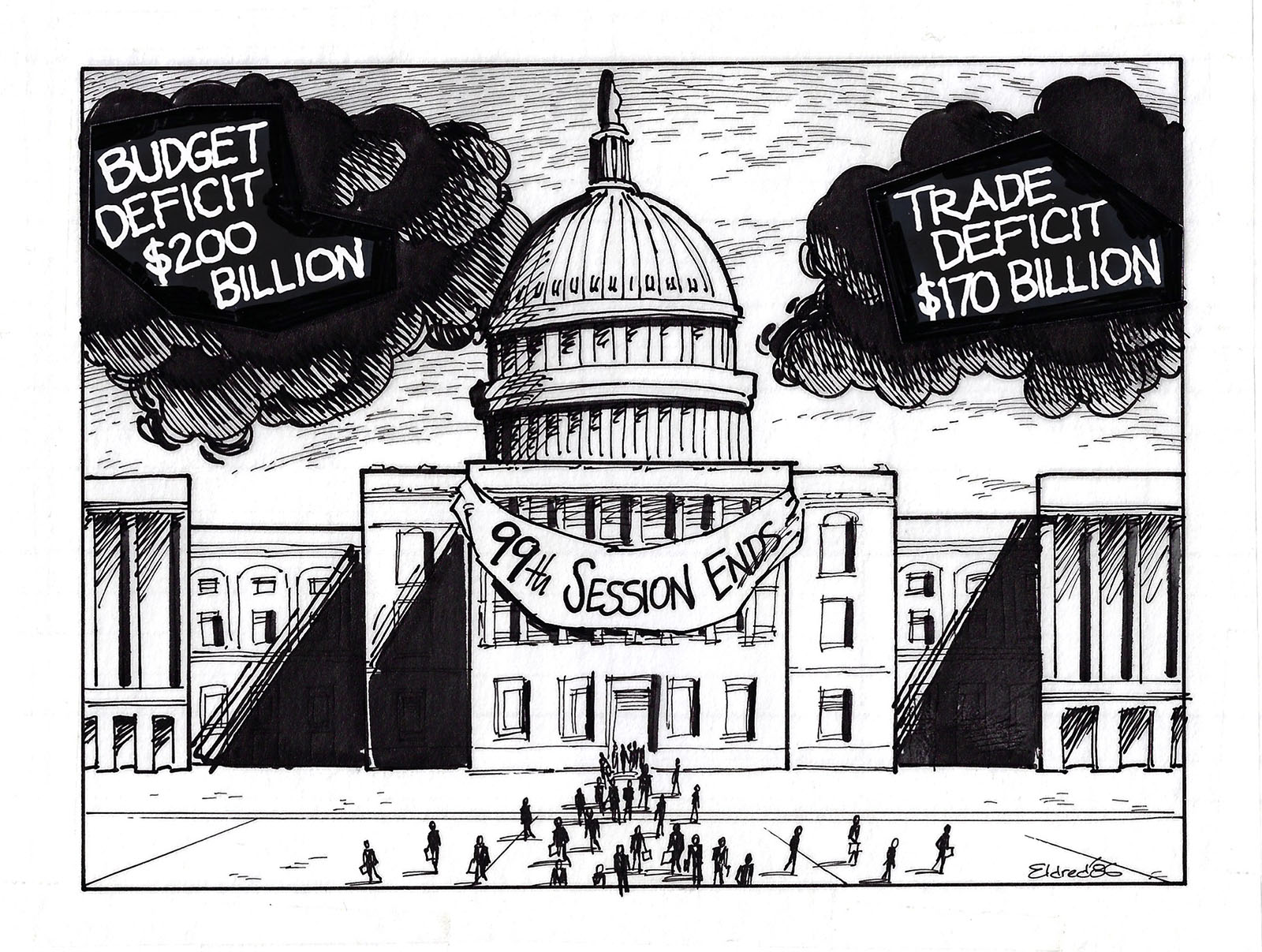 Numbers like those seem quaint now, but it’s all a matter of proportion. 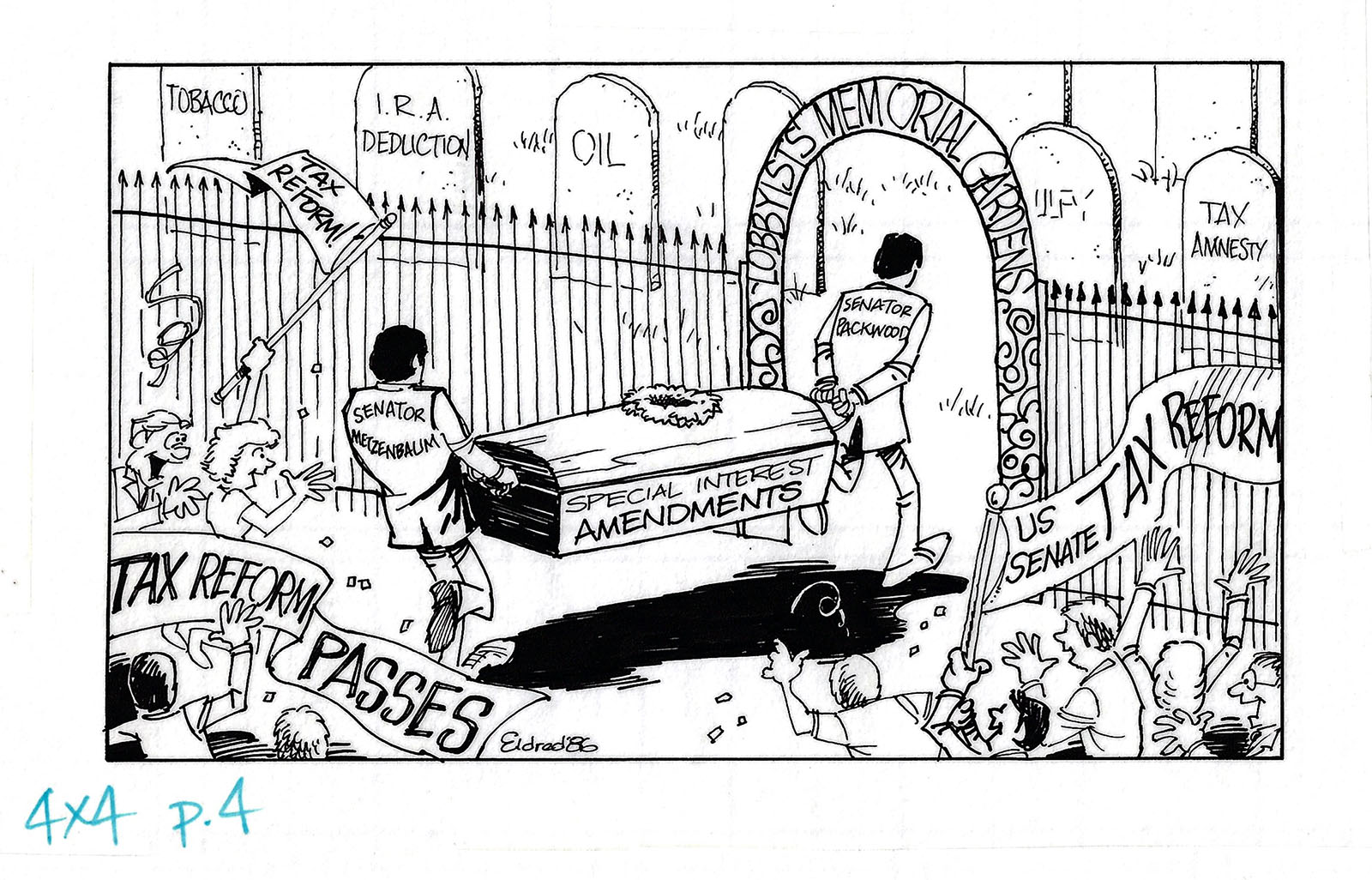 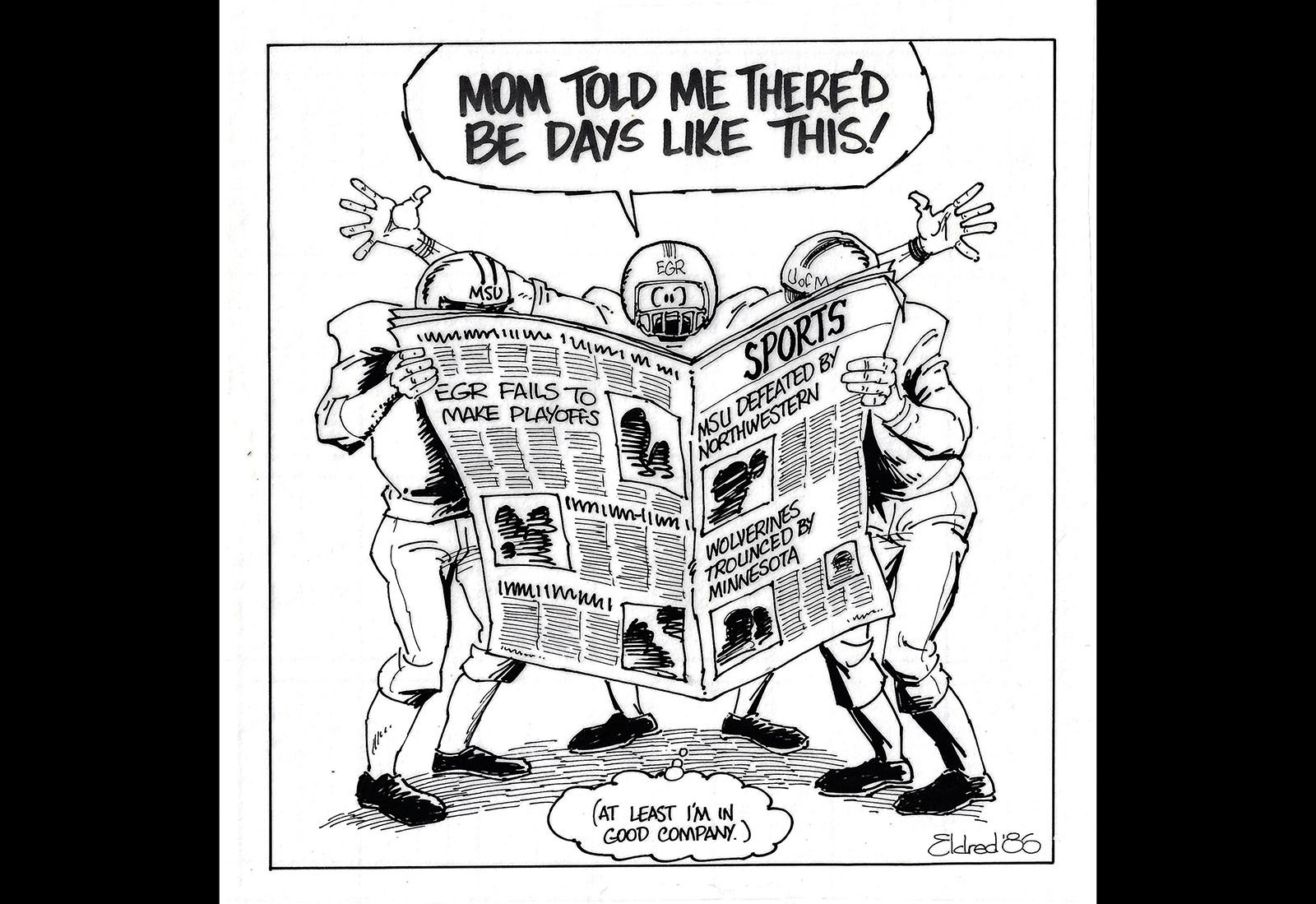 Based on seeing this one again, I think the East Grand Rapids high school football team and both of Michigan’s major universities must have hit the wall in the same season. I didn’t give ANY of my time or attention to football back then. Never felt compelled to change that. 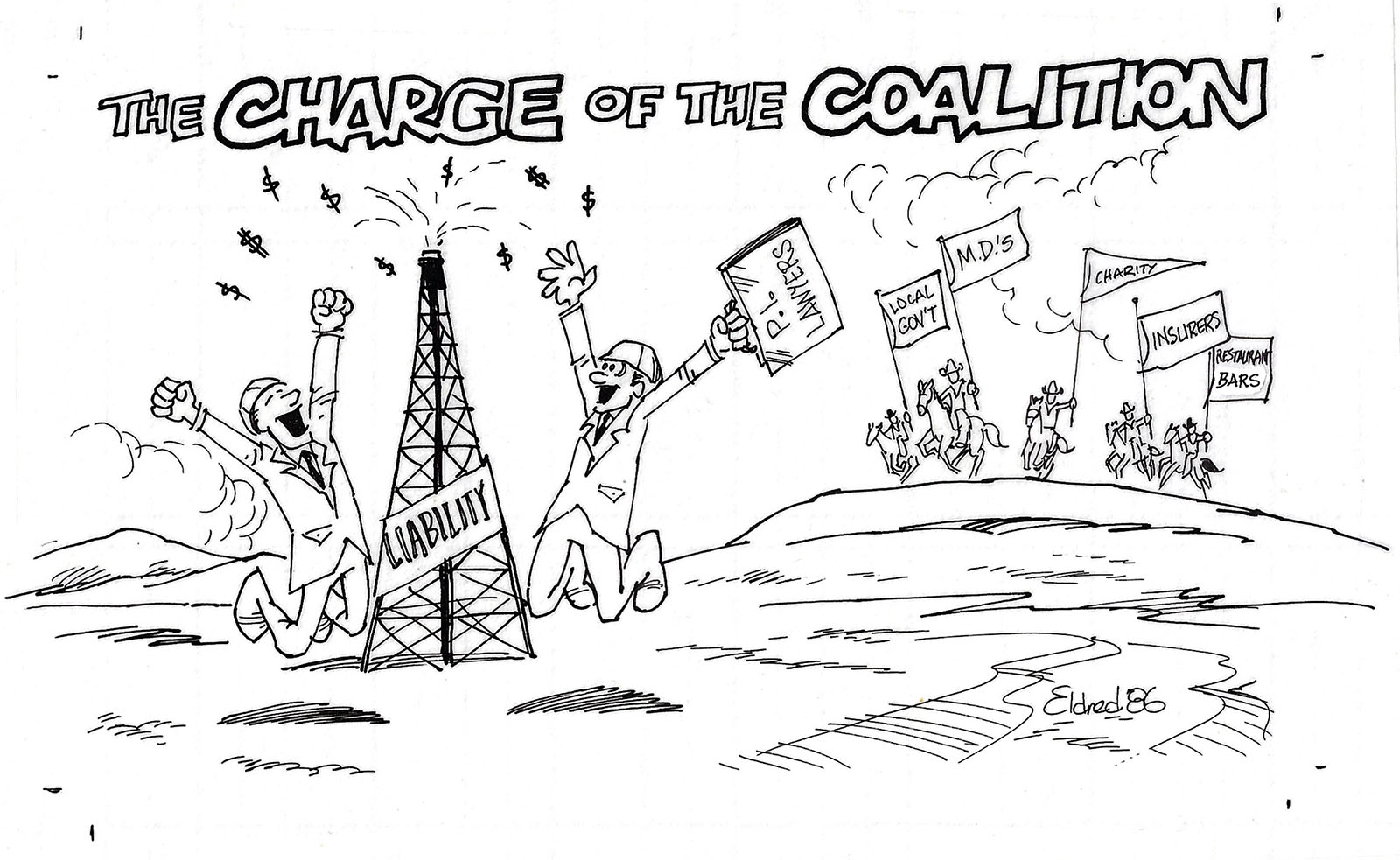 P.I. stood for personal injury lawyers, and I think this represented a breakthrough that turned the legal system into a cash fountain. Of course other parties would come riding in to get their beaks wet. 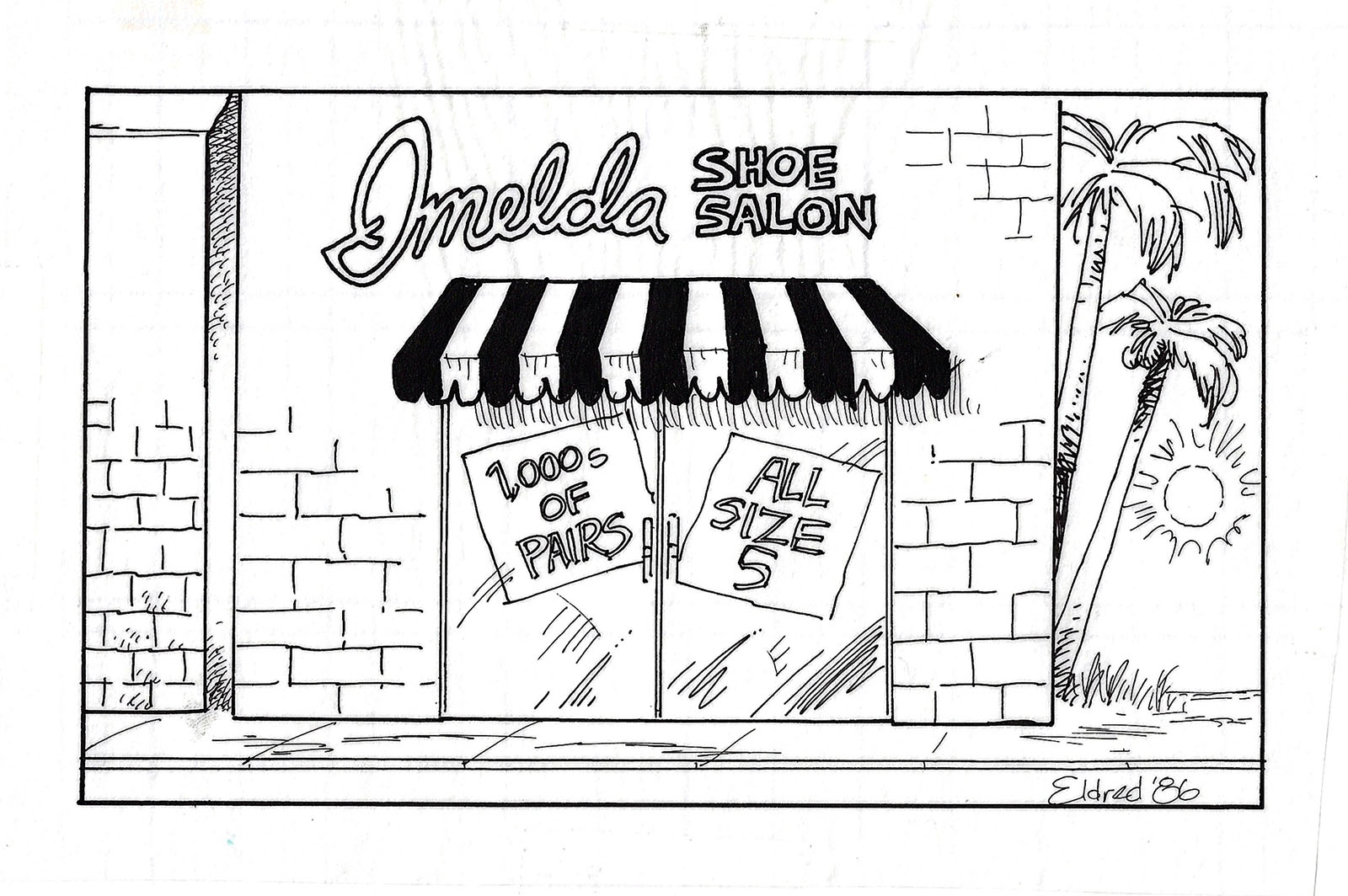 Imelda Marcos was the first lady of the Philippines, convicted of corruption along with her husband Ferdinand. She became the butt of many jokes when it was learned that she’d amassed over 3,000 pairs of shoes. 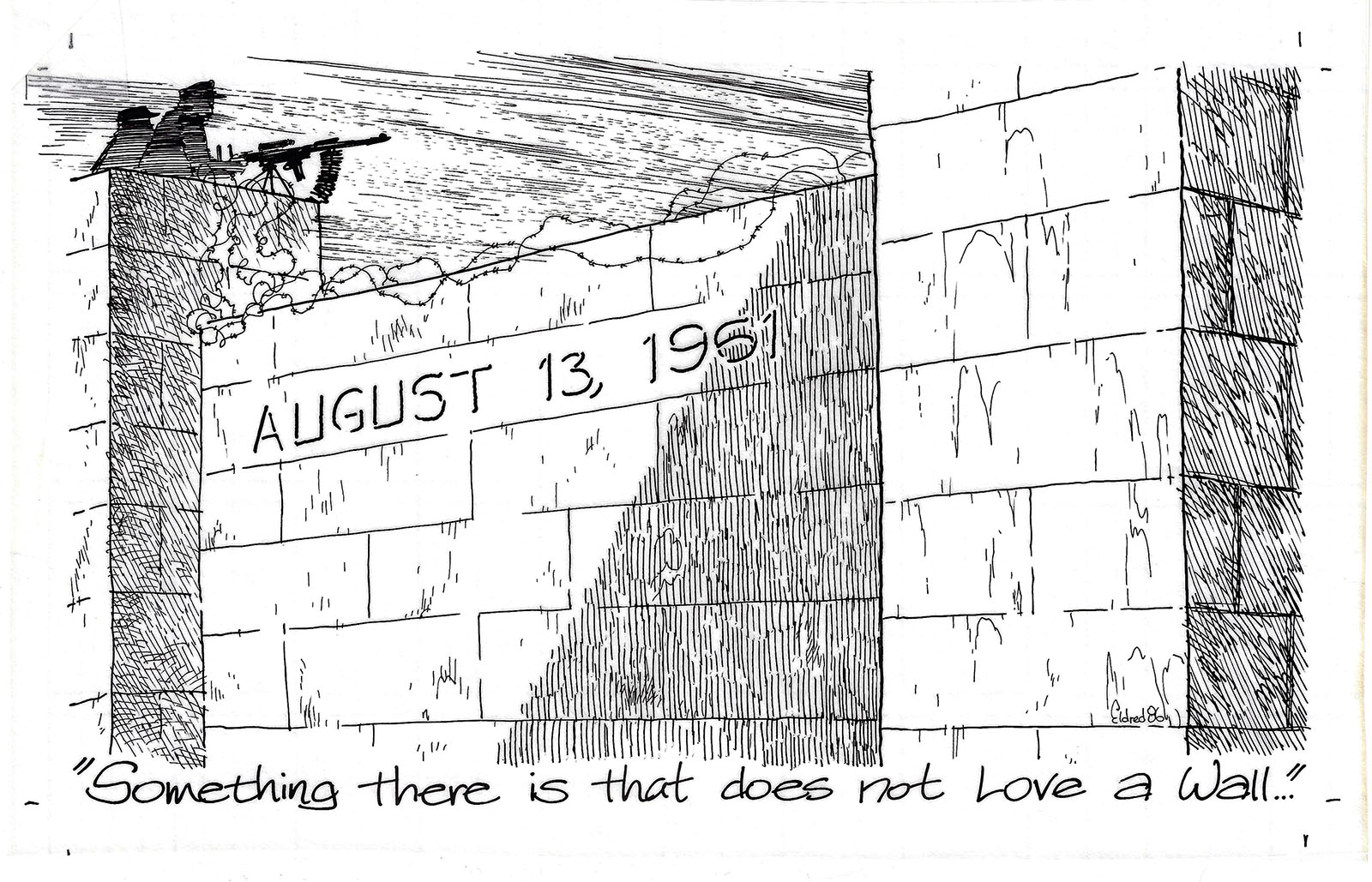 A comment on the Berlin Wall at a time when it was unexpectedly about to come tumbling down. 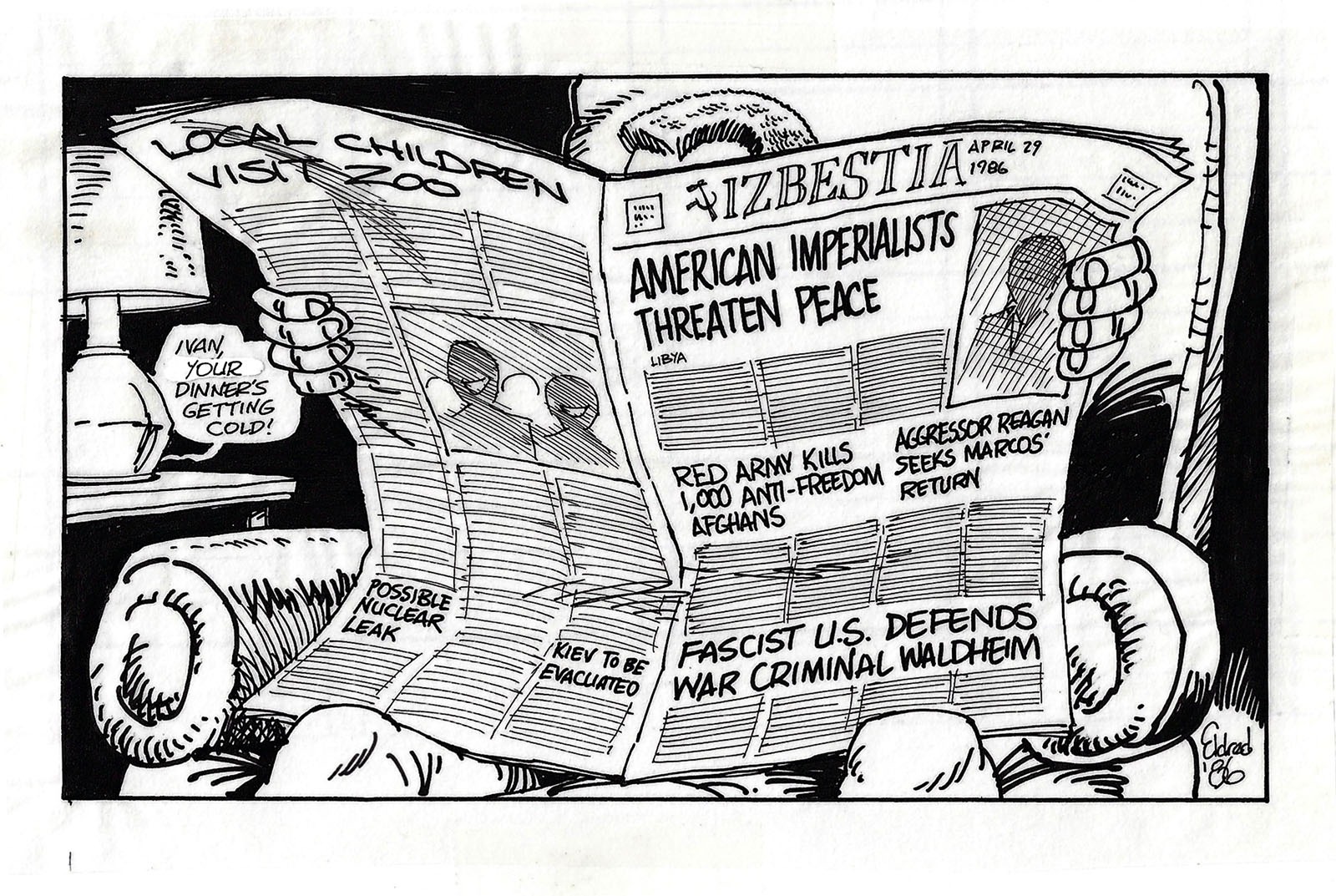 Fake news headlines in the pre-internet era? That would never happen. 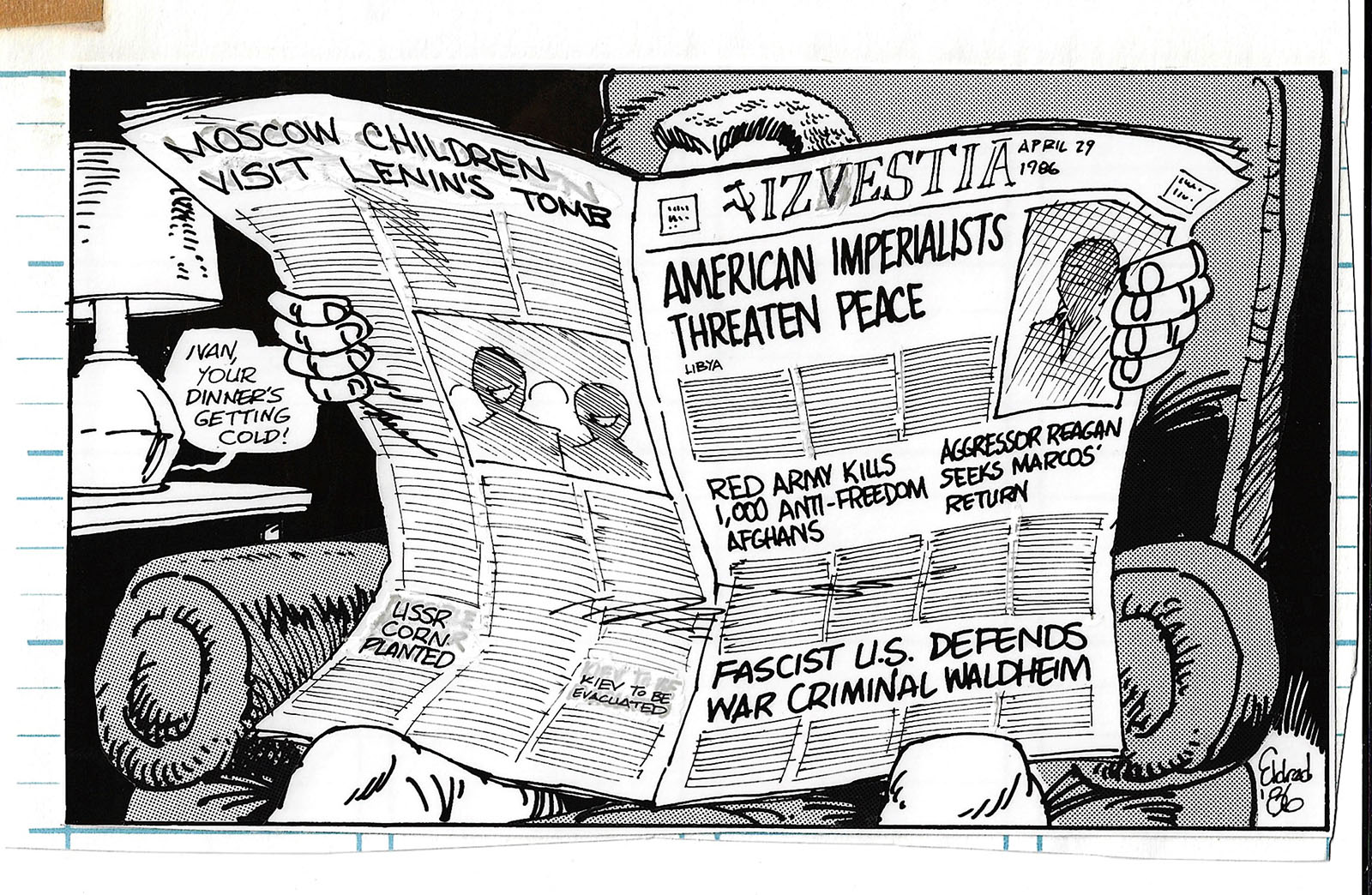 Slightly edited version. I don’t remember why I kept both, but I did. 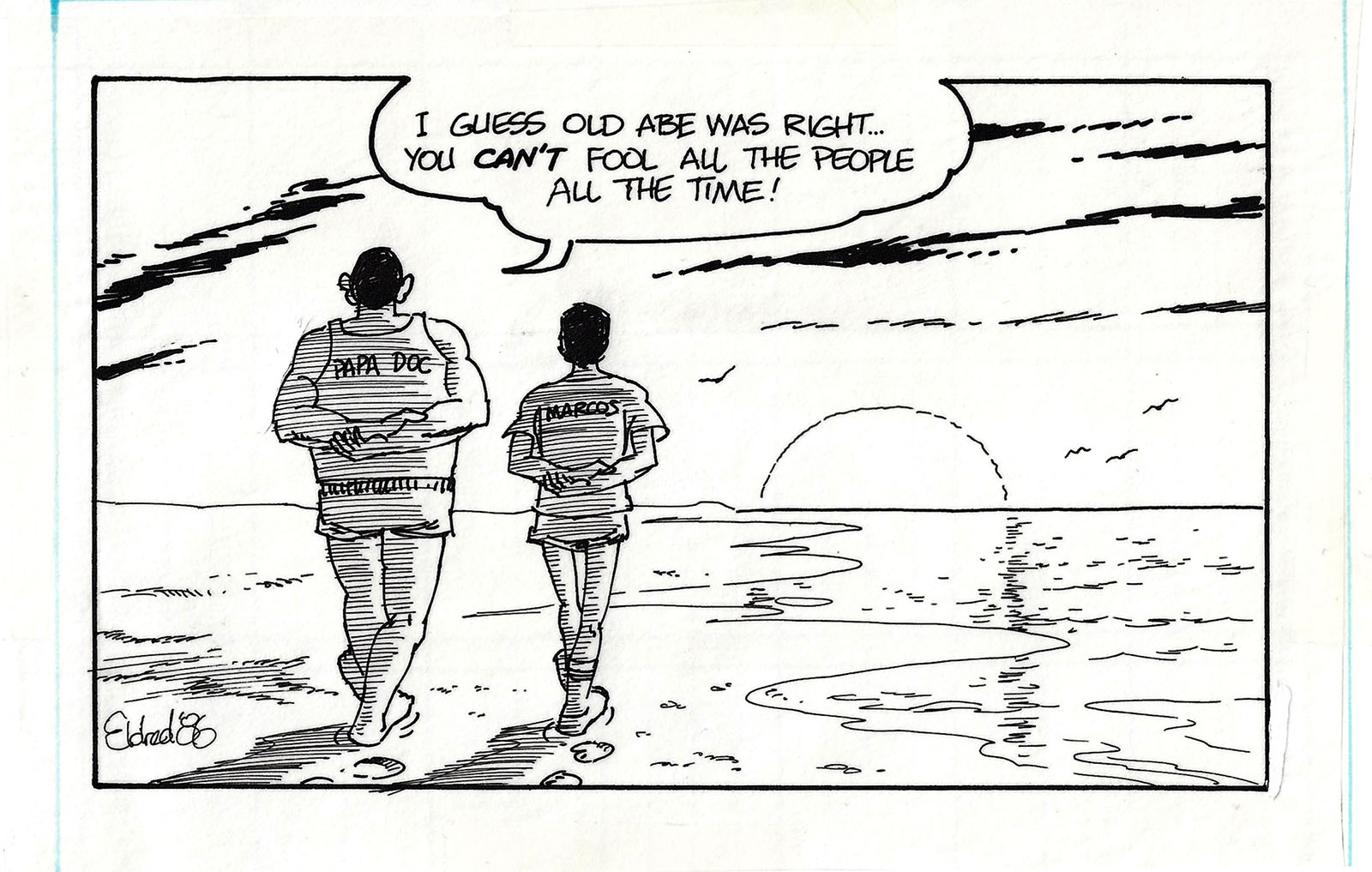 “Papa Doc” was the nickname for Haitian dictator Francois Duvalier (who actually was a medical doctor) until he died in 1971. When Ferdinand Marcos was removed from power, he landed in the same category of deposed jerks. 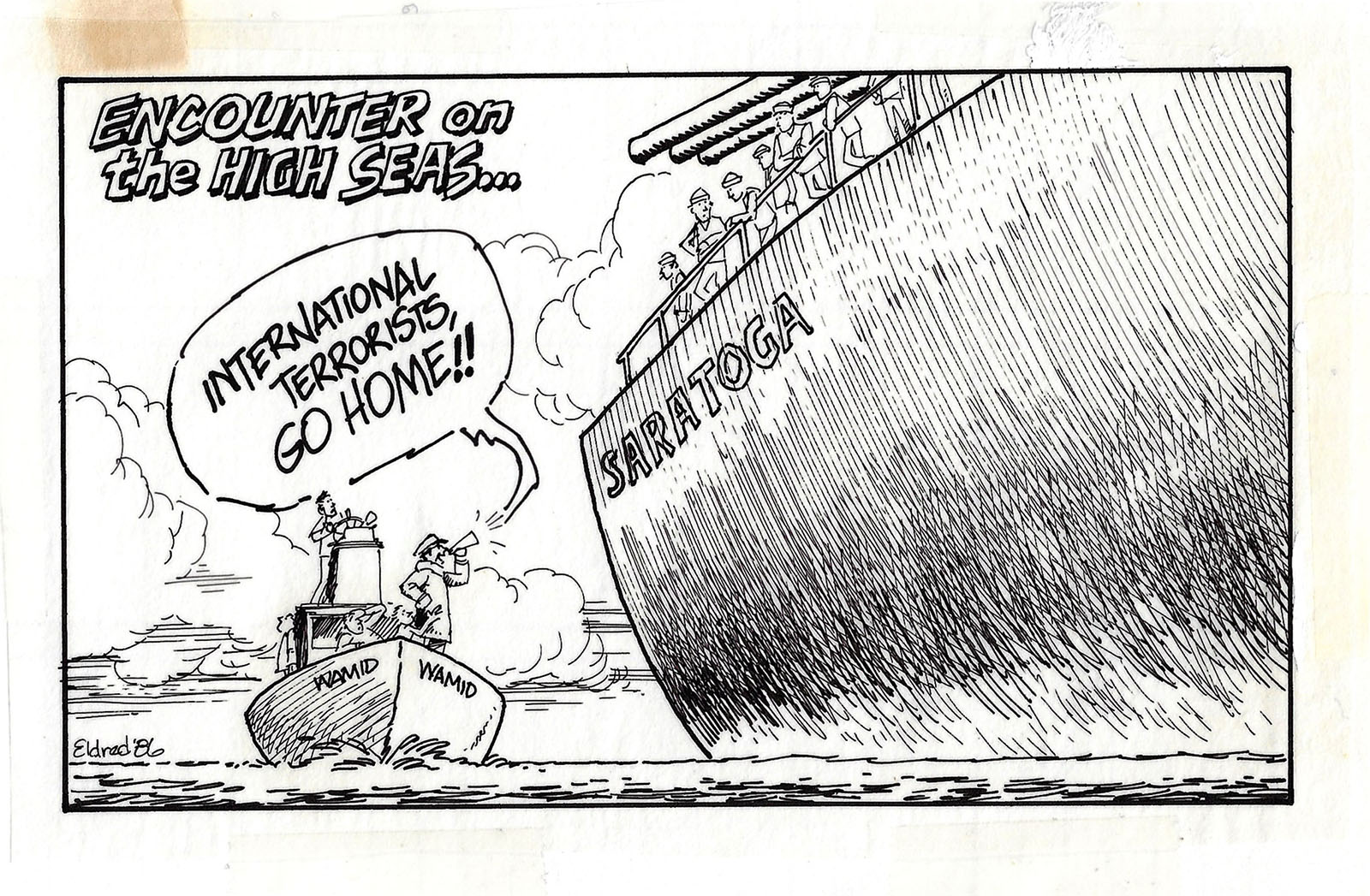 Another such jerk was Muammar el-Qaddafi of Libya, a flamboyant blowhard who personally confronted the US Navy in a patrol boat and proclaimed a “line of death” in a play for media attention. Guess where he ended up. 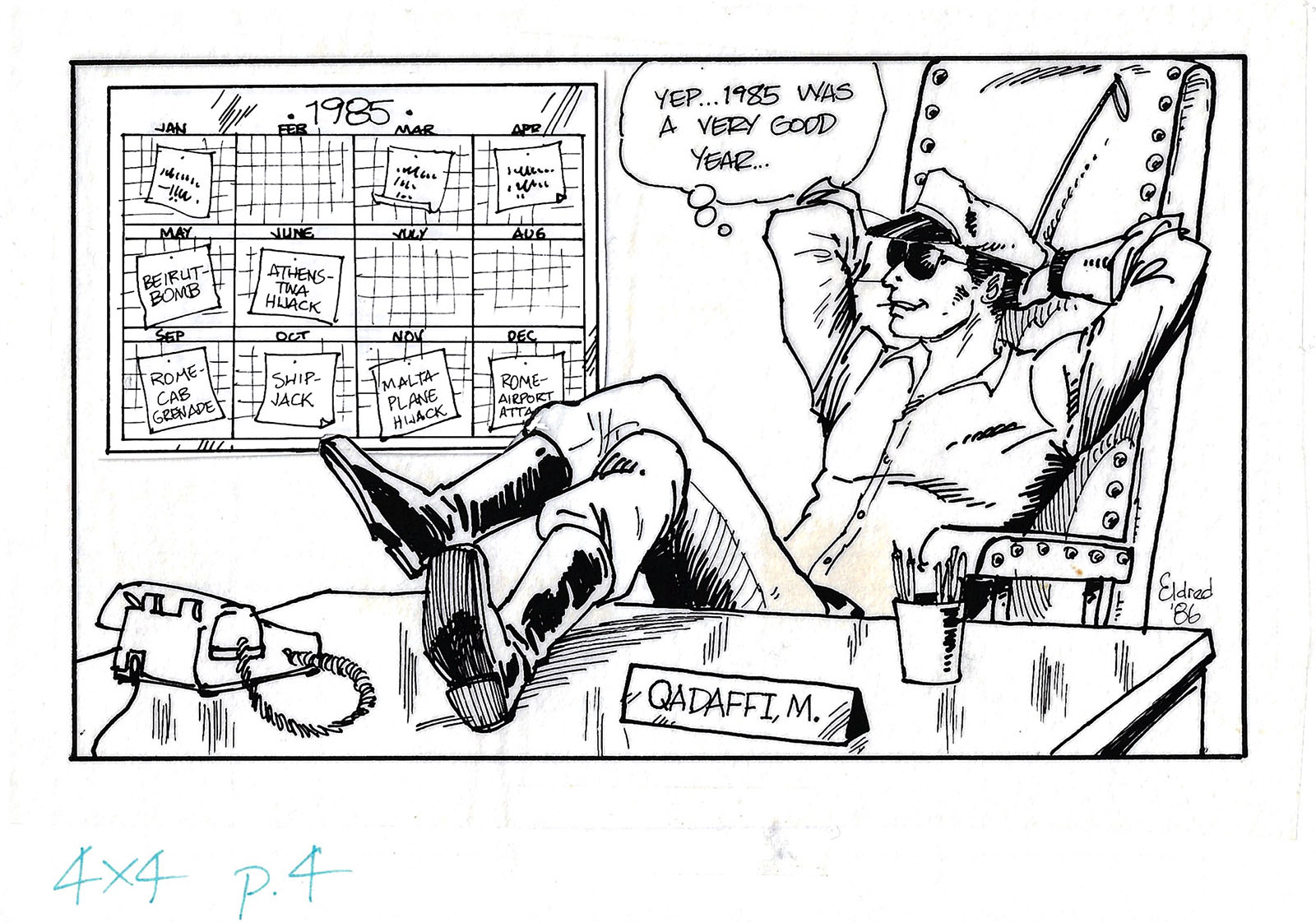 Qaddafi had his own little terrorist racket going on for quite a while. It was no secret, Americans just wondered what line he had to cross before it came back to bite him. 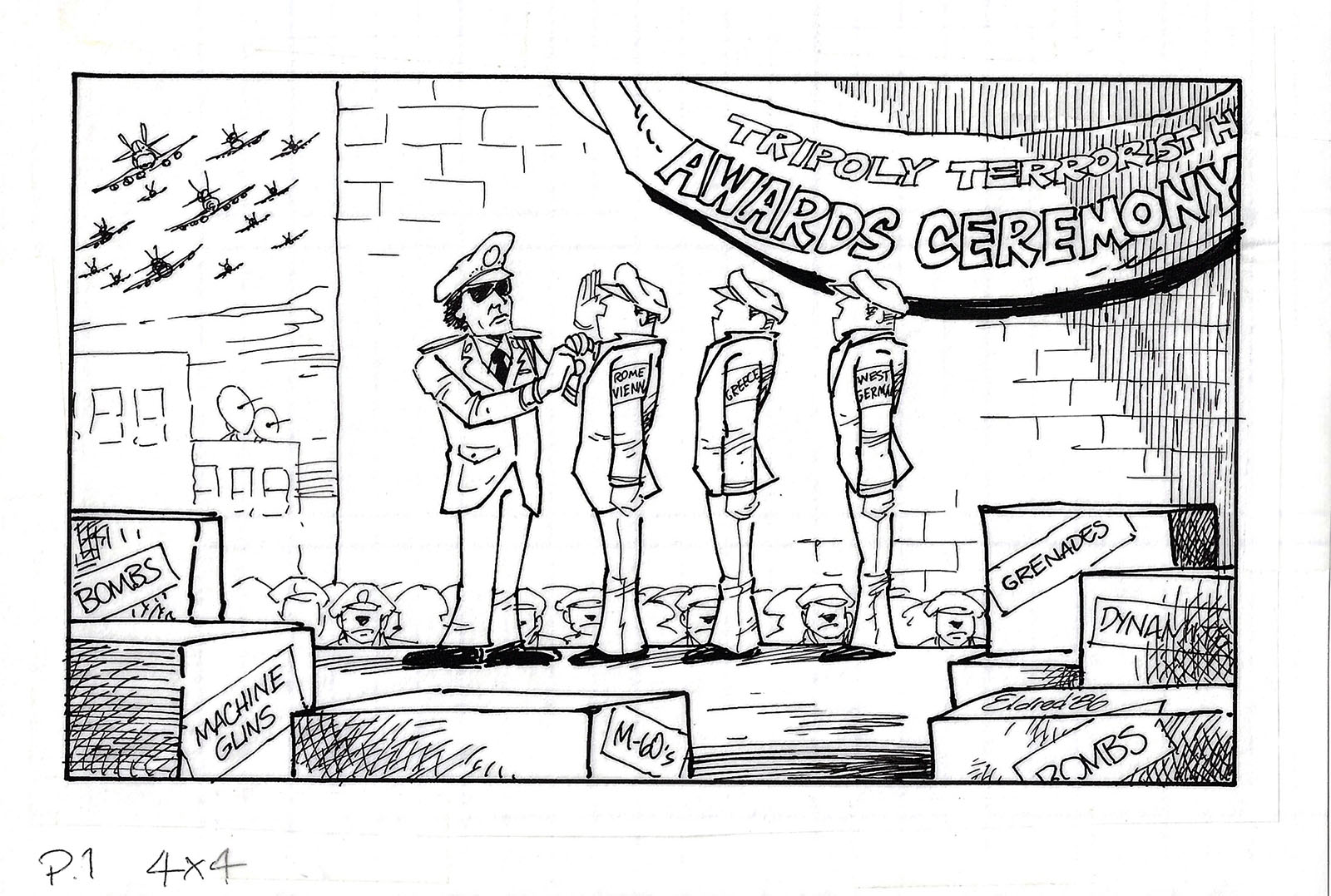 There he is again, just about to find out that actions have consequences. 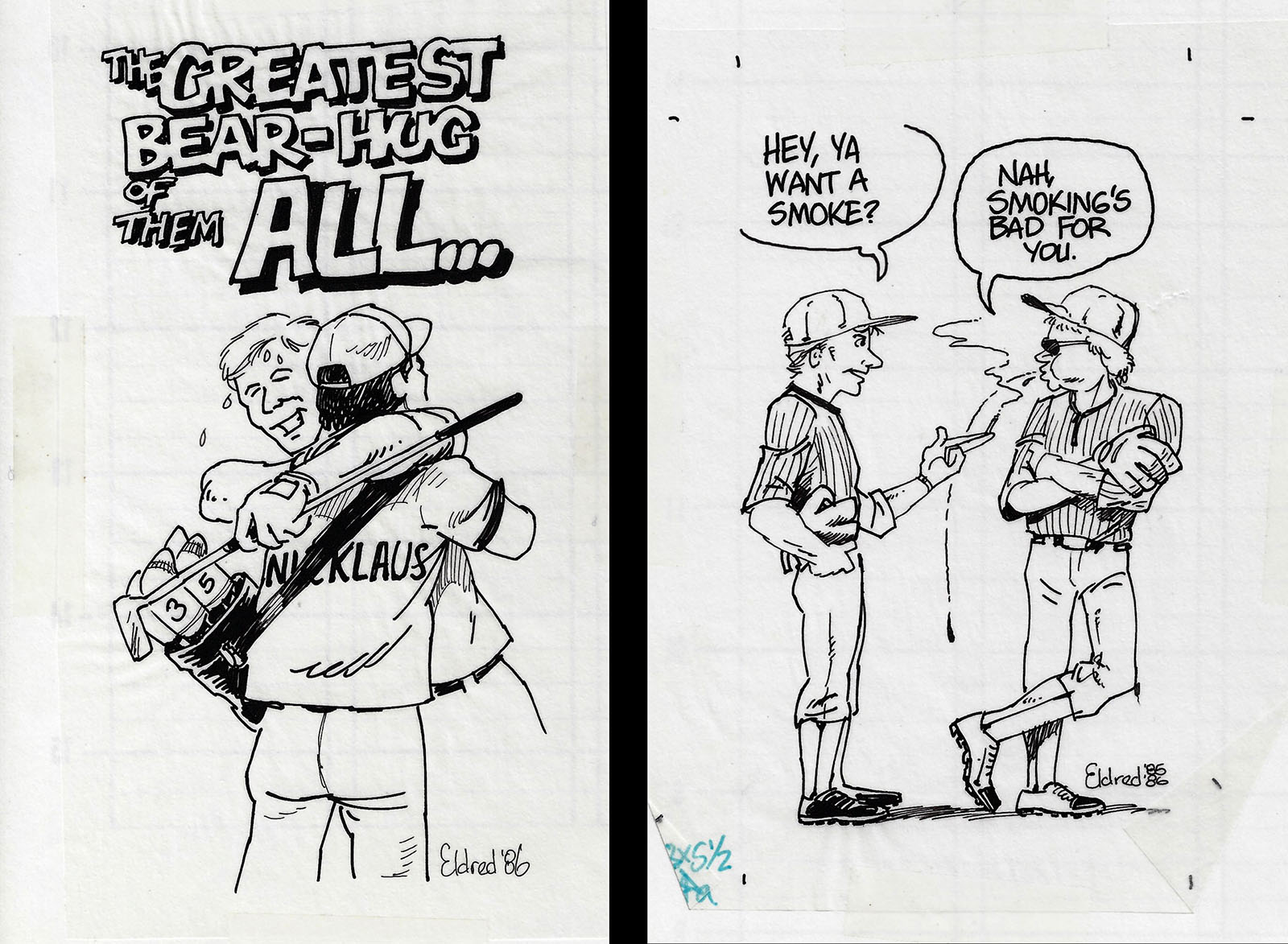 Two more sports cartoons, this time golf and baseball. Golf pro Jack Nicklaus was known as “the Golden Bear” for some reason. The “smoking” cartoon has two dates on it because it was first drawn in ’85 with different characters. 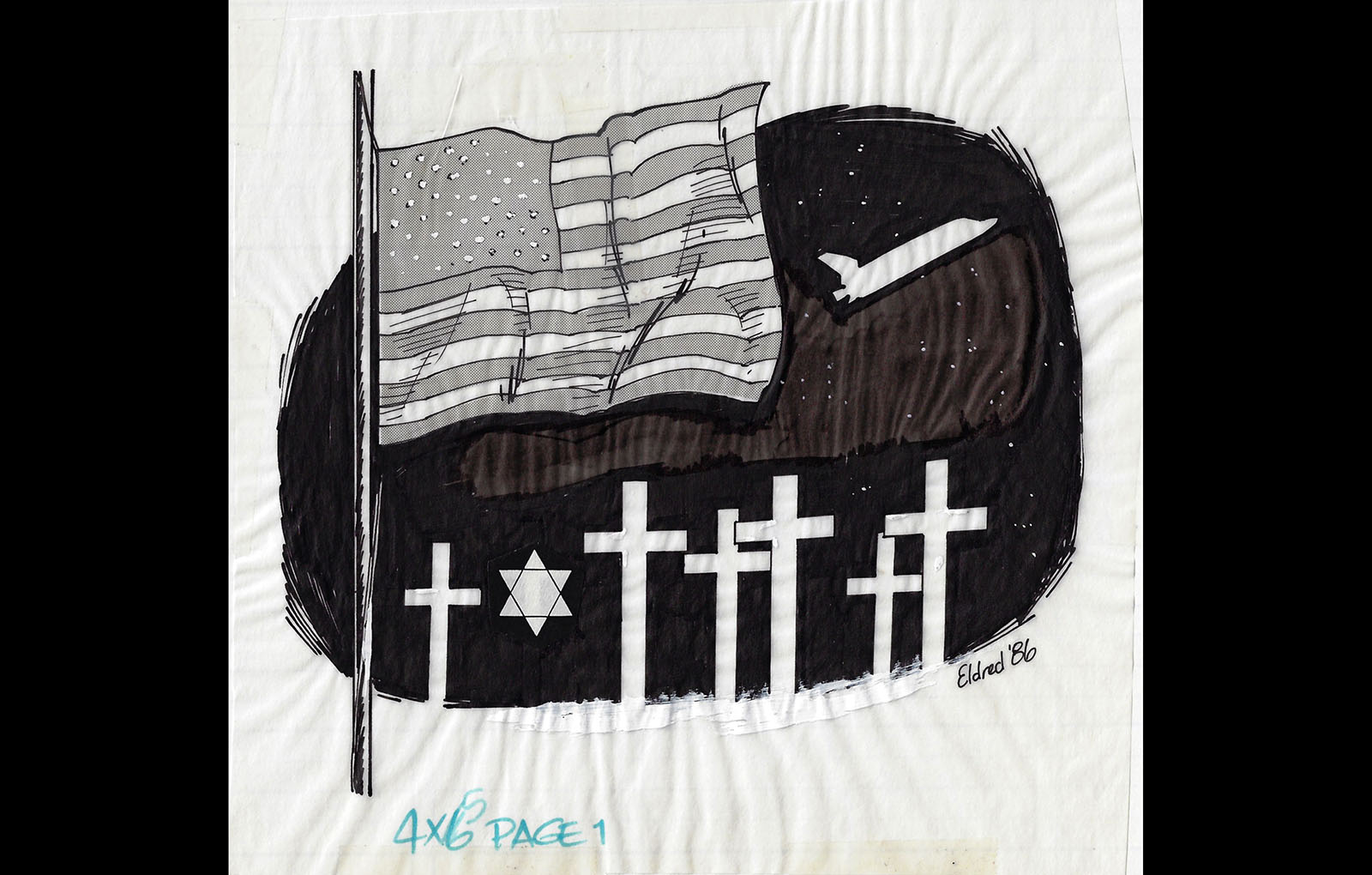 This was one that I personally felt strongly about, commemorating the loss of Space Shuttle Challenger. It was originally drawn with seven crosses until a reader of the newspaper pointed out that one of the astronauts was Jewish. 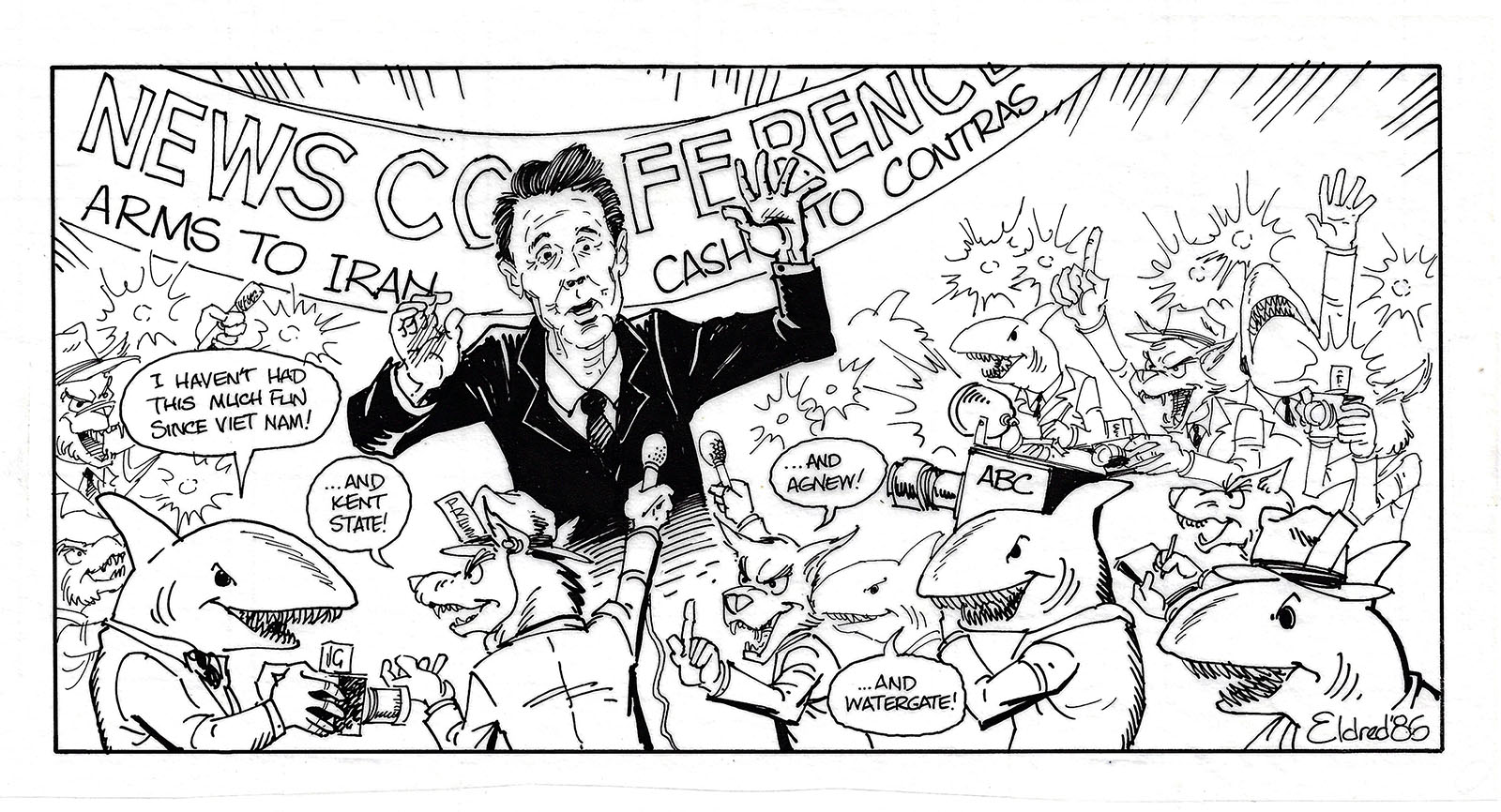 Oh, that mean, nasty old press corps, trying to hold poor politicians accountable for what they do… 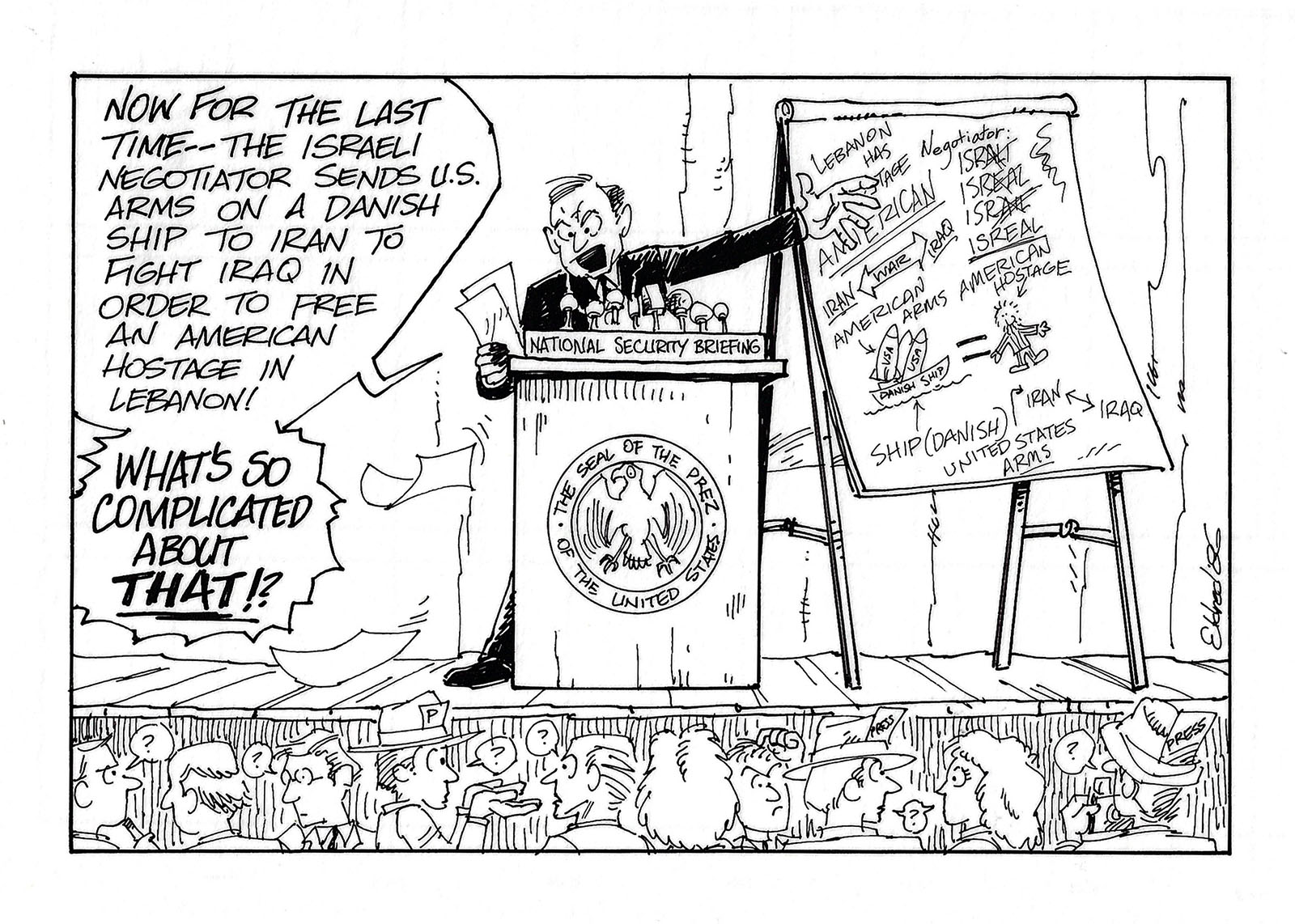 Here’s a little secret: international relationships have ALWAYS been complicated. Sorry if that’s a shock. 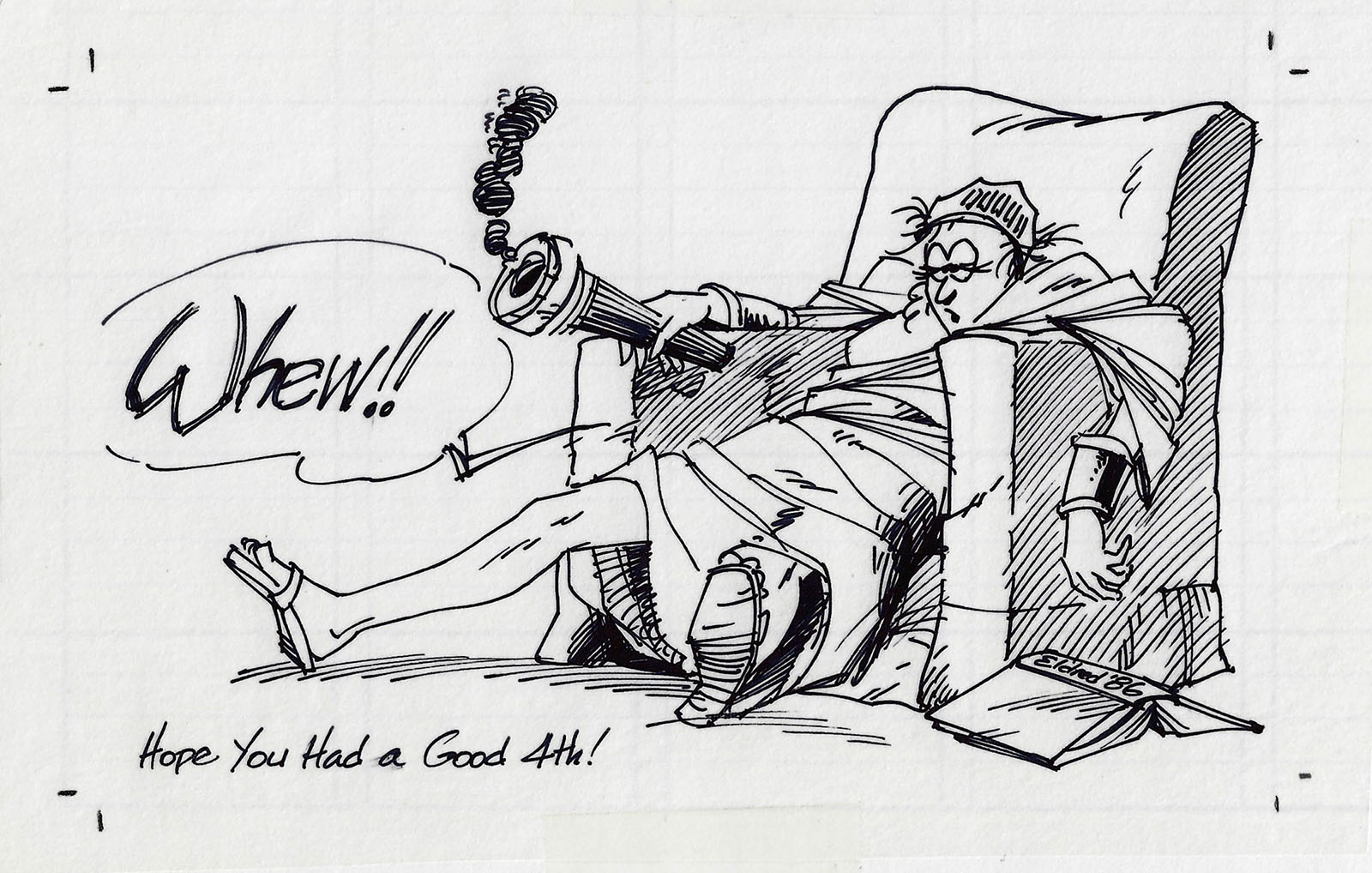 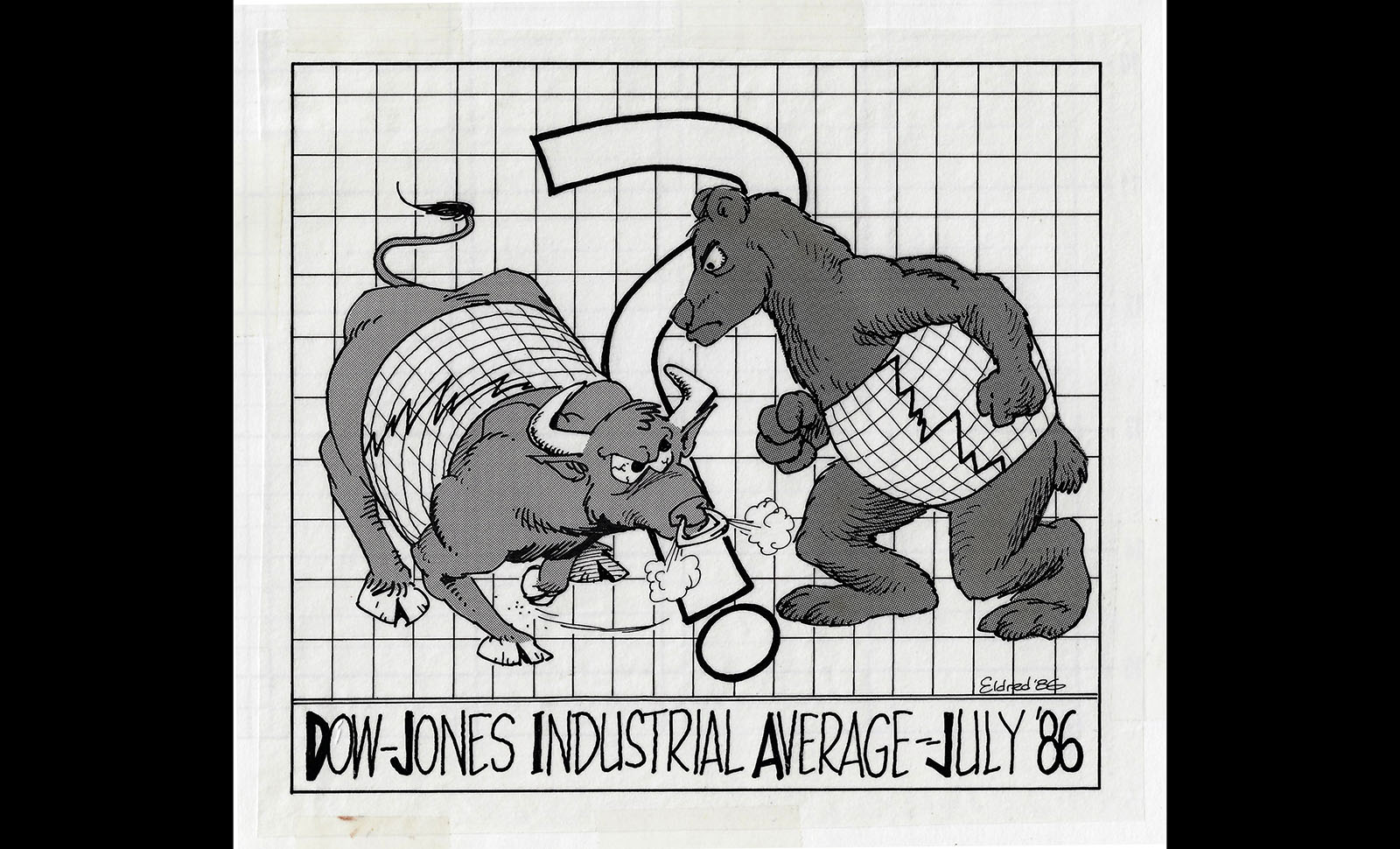 I’m glad now that I spent a good chunk of my life not having to care about the state of US finances. I certainly made the most of it. 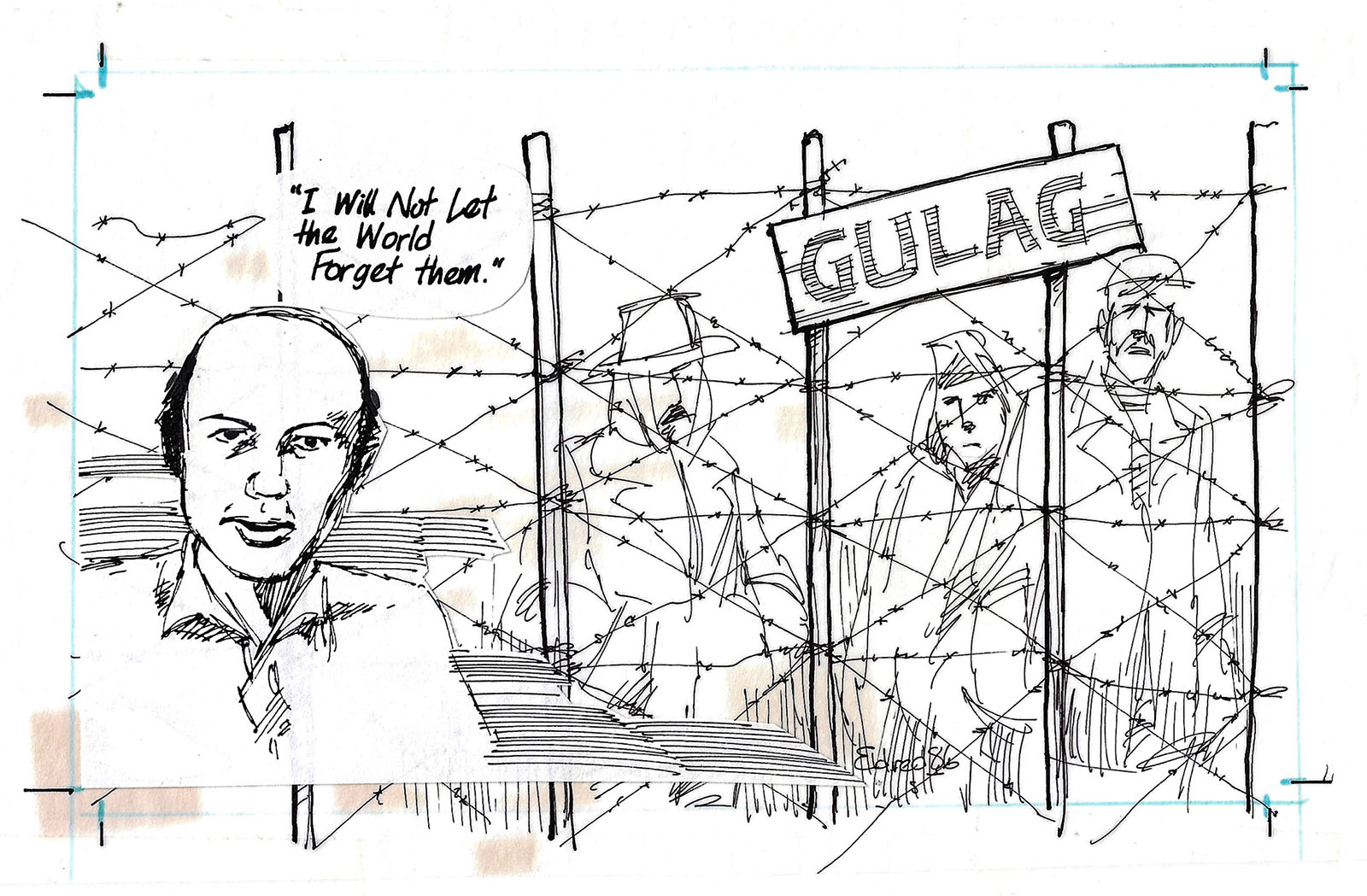 I knew who this was at the time, but can’t for the life of me remember him now. Any hints would be welcome. 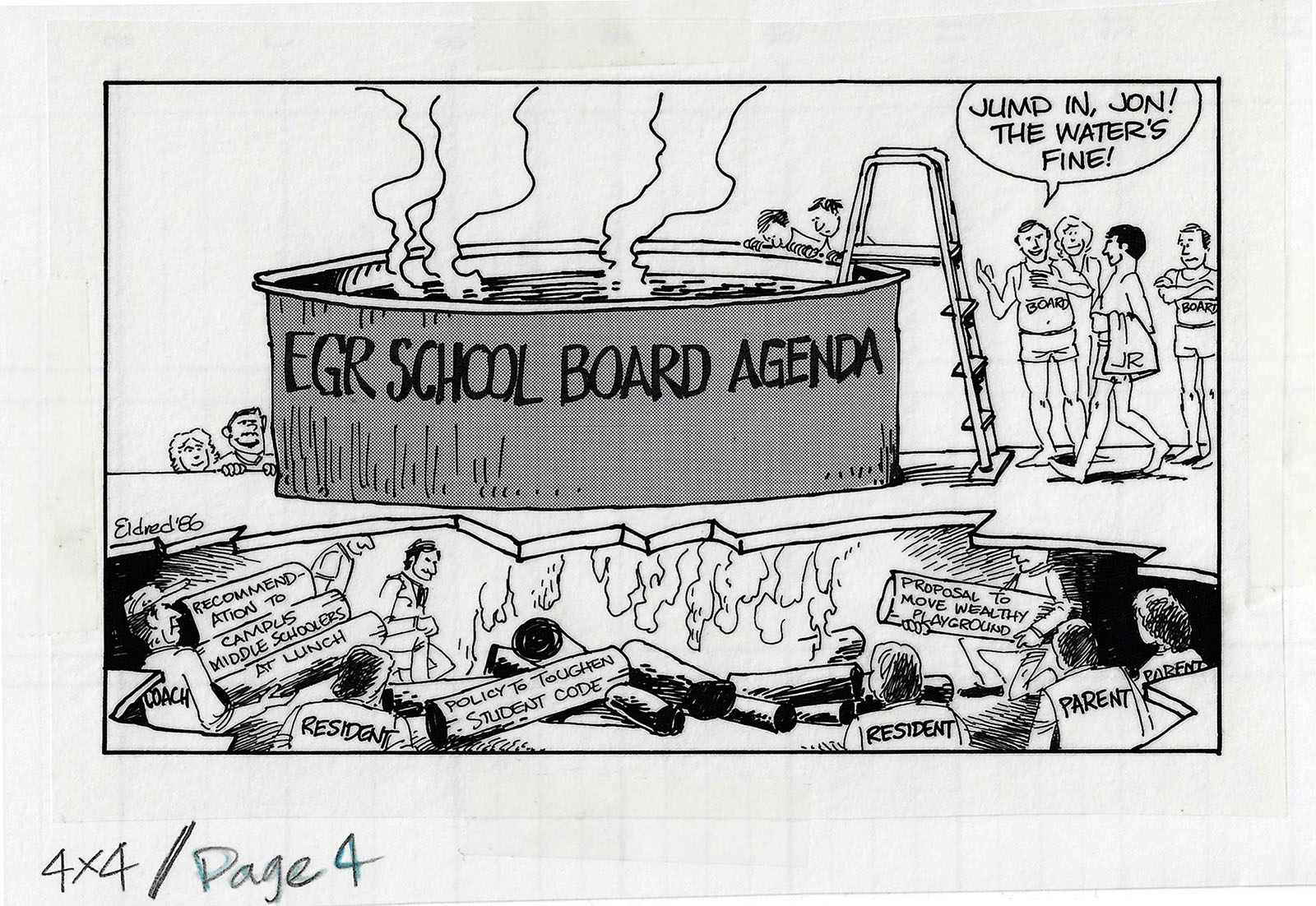 Someone with the initials “JR” had just been elected to the East Grand Rapids high school board, which was a local hotbed. Or in this case, a hot tub. 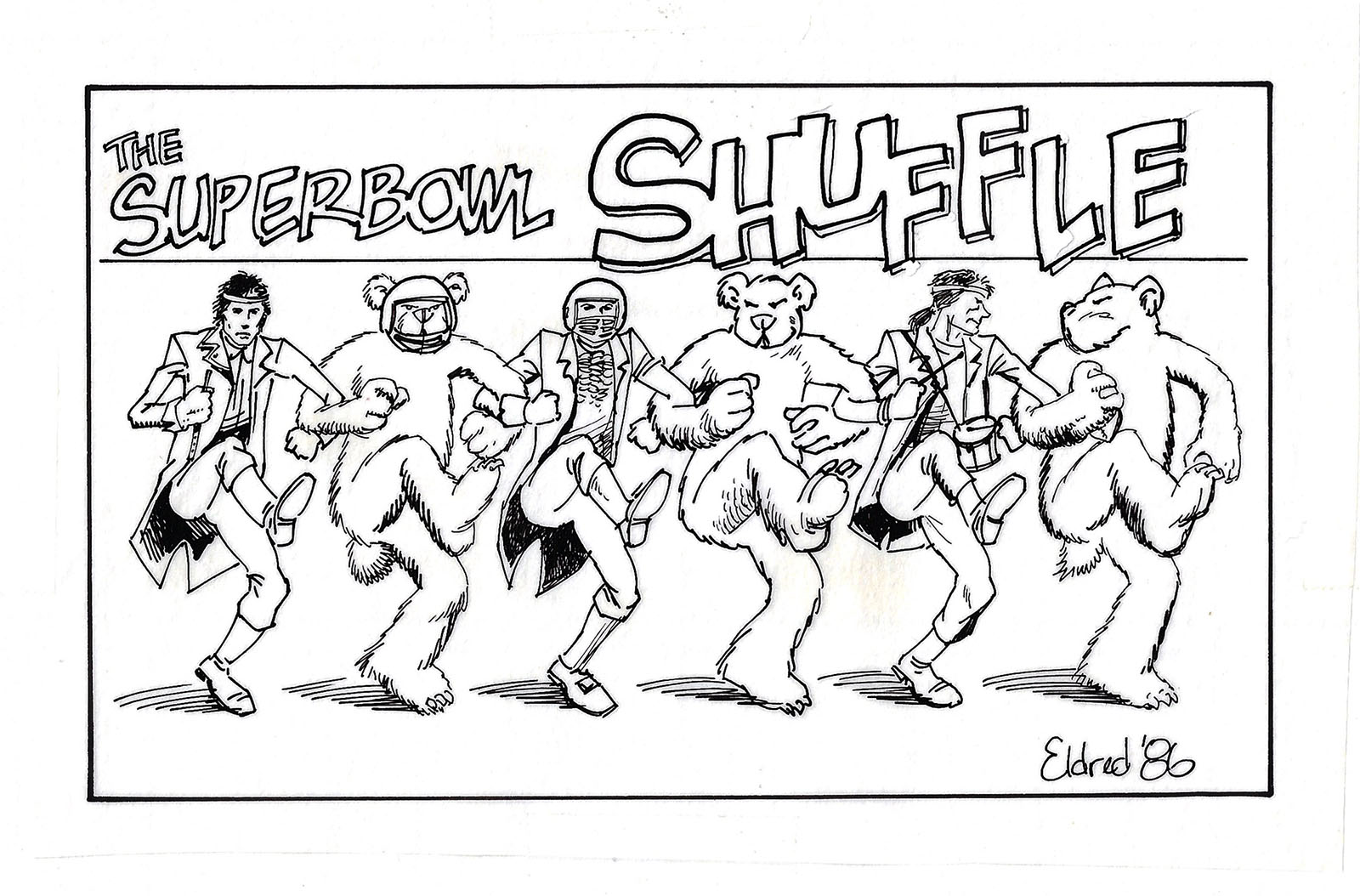 Even if you avoided sports at every opportunity (like I did) you could NOT escape the Chicago Bears in 1986, especially if you lived in the Midwest (like I did). They trounced the Patriots in Superbowl XX and cemented a legendary status that lives on today.

I moved on from Cadence before I had to face the onslaught of another Christmas season in 1986. My next job was for…another weekly newspaper. Which didn’t publish political cartoons. But it was the one that moved me out of my hometown and opened up a whole new life. See where it took me here.