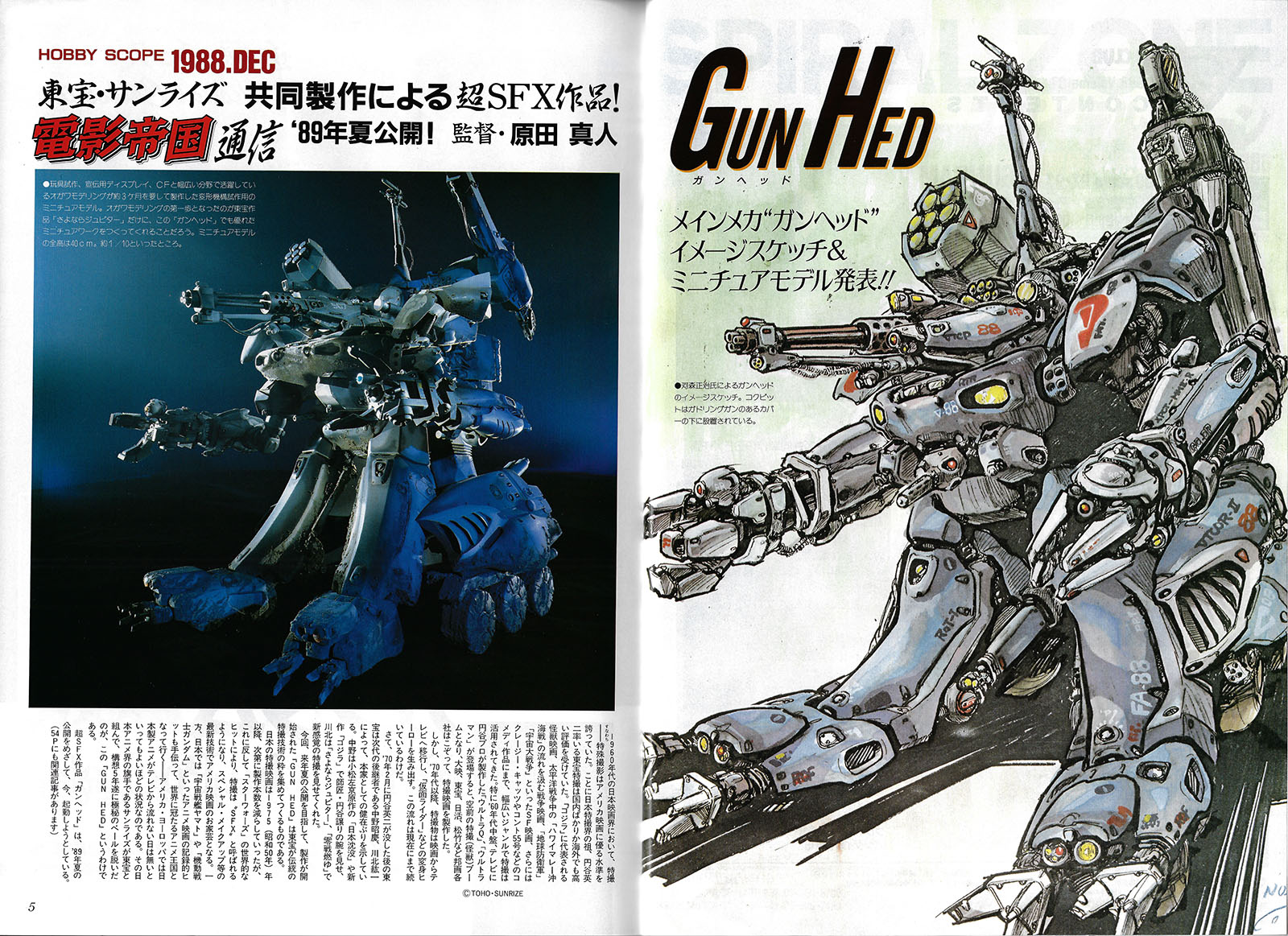 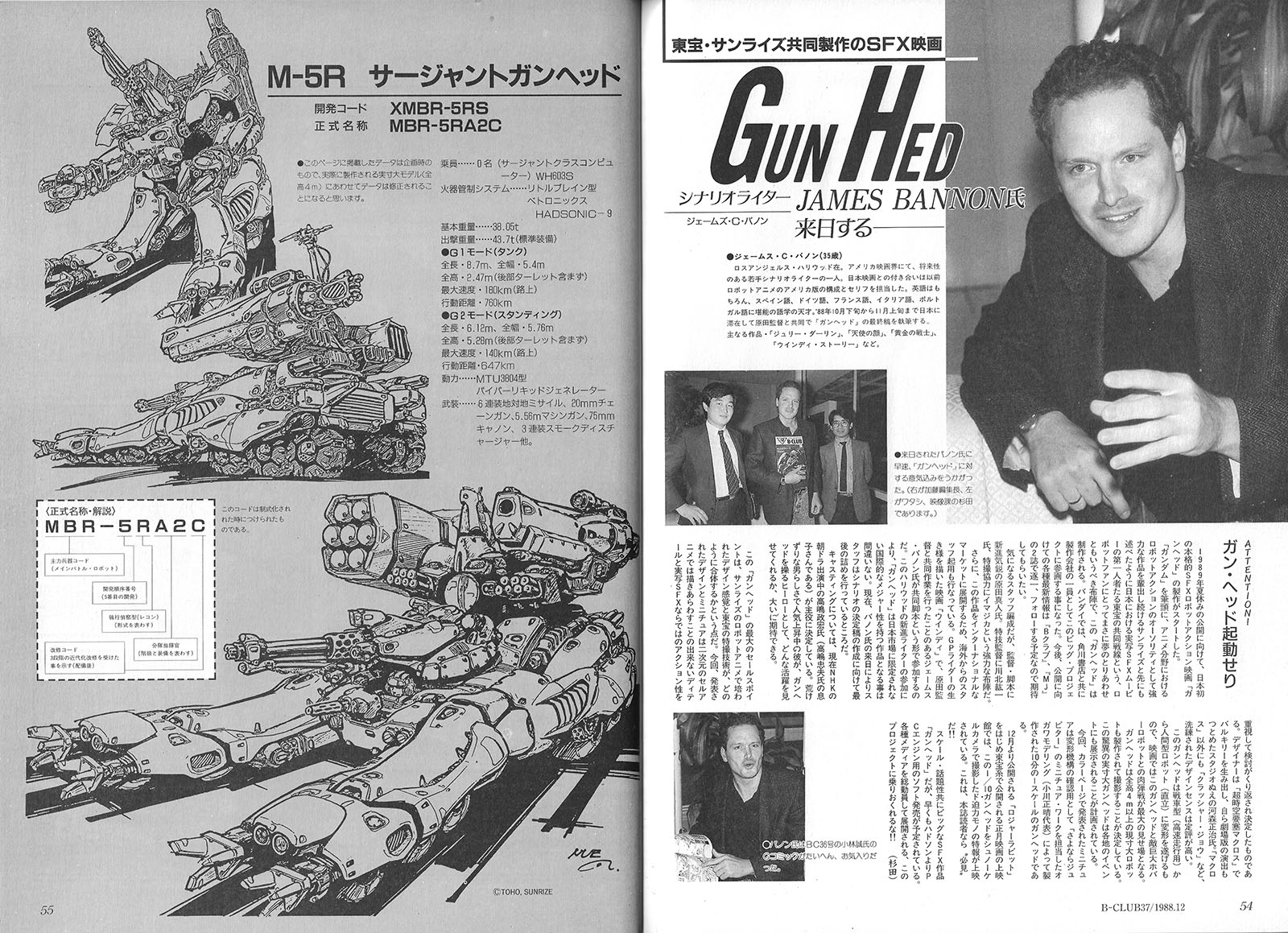 Lives in Los Angeles and Hollywood. A promising young scriptwriter in the American film industry. He has been involved with Japanese movies for a long time, having worked on the American version of the robot anime. He is a language genius, fluent in English, Spanish, German, French, Italian, and Portuguese. He stayed in Japan from late October to early November 1988 to write the final draft of Gunhed in collaboration with director Harada. They previously collaborated on the 1984 film Windy Day. 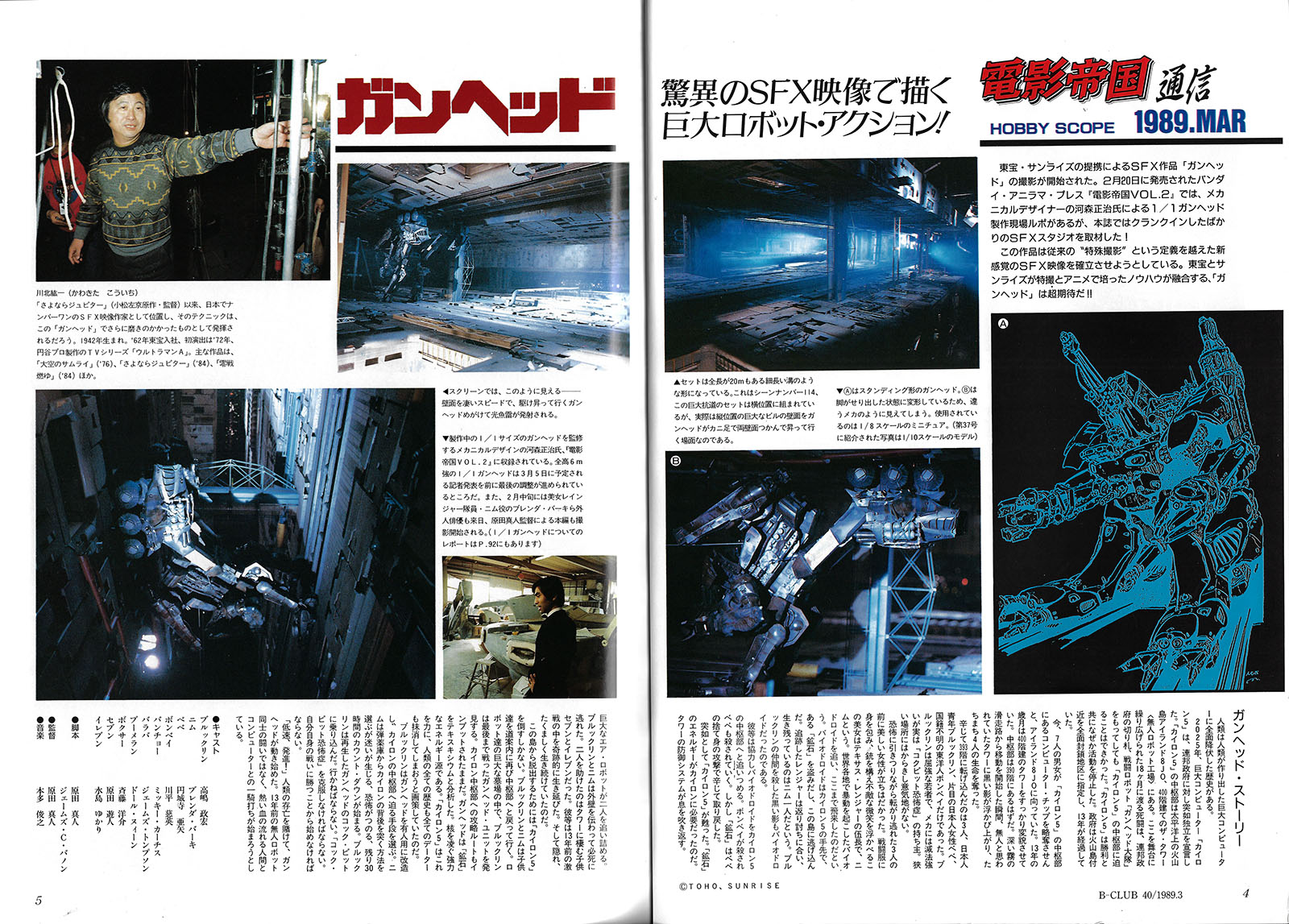 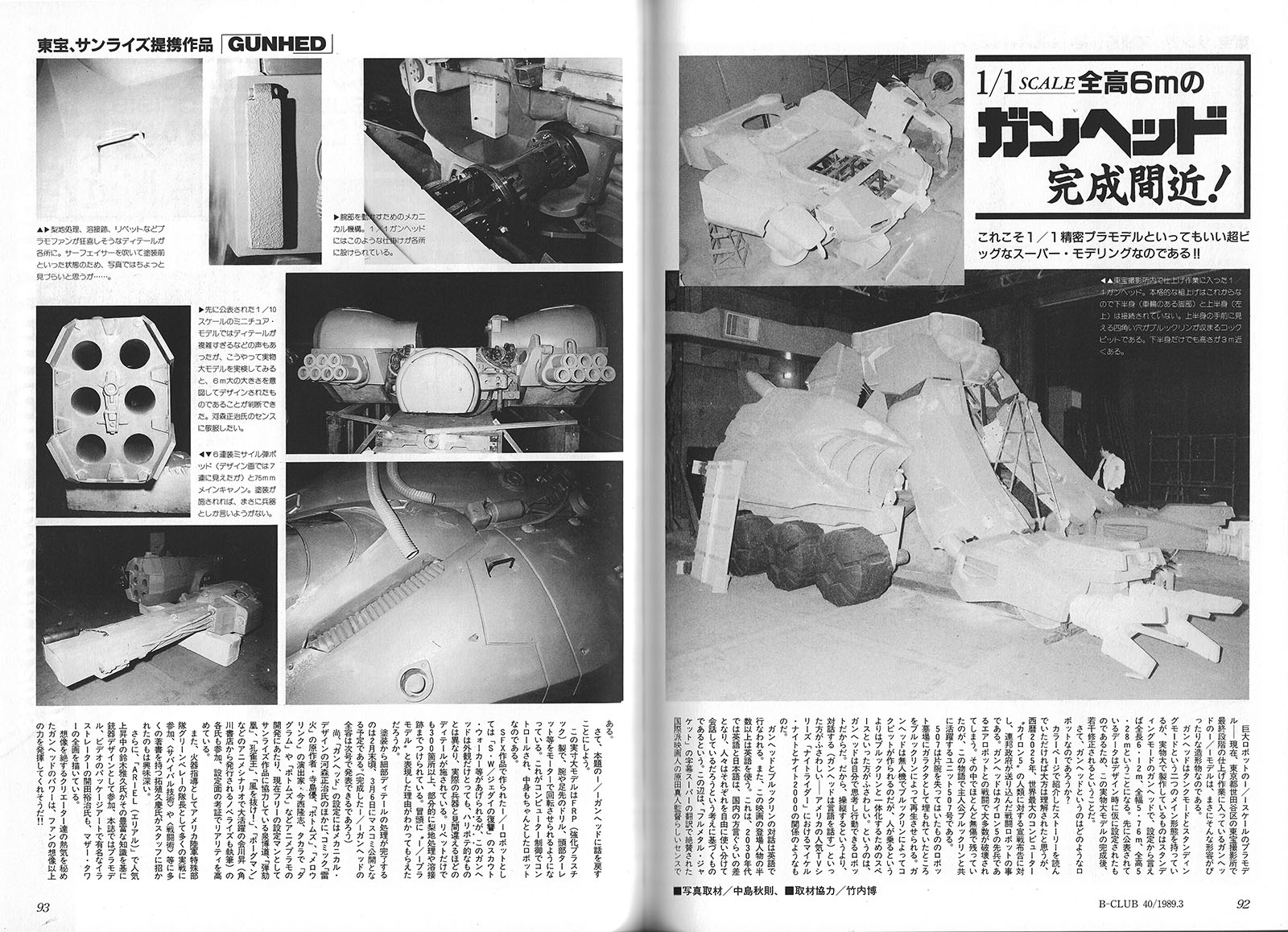 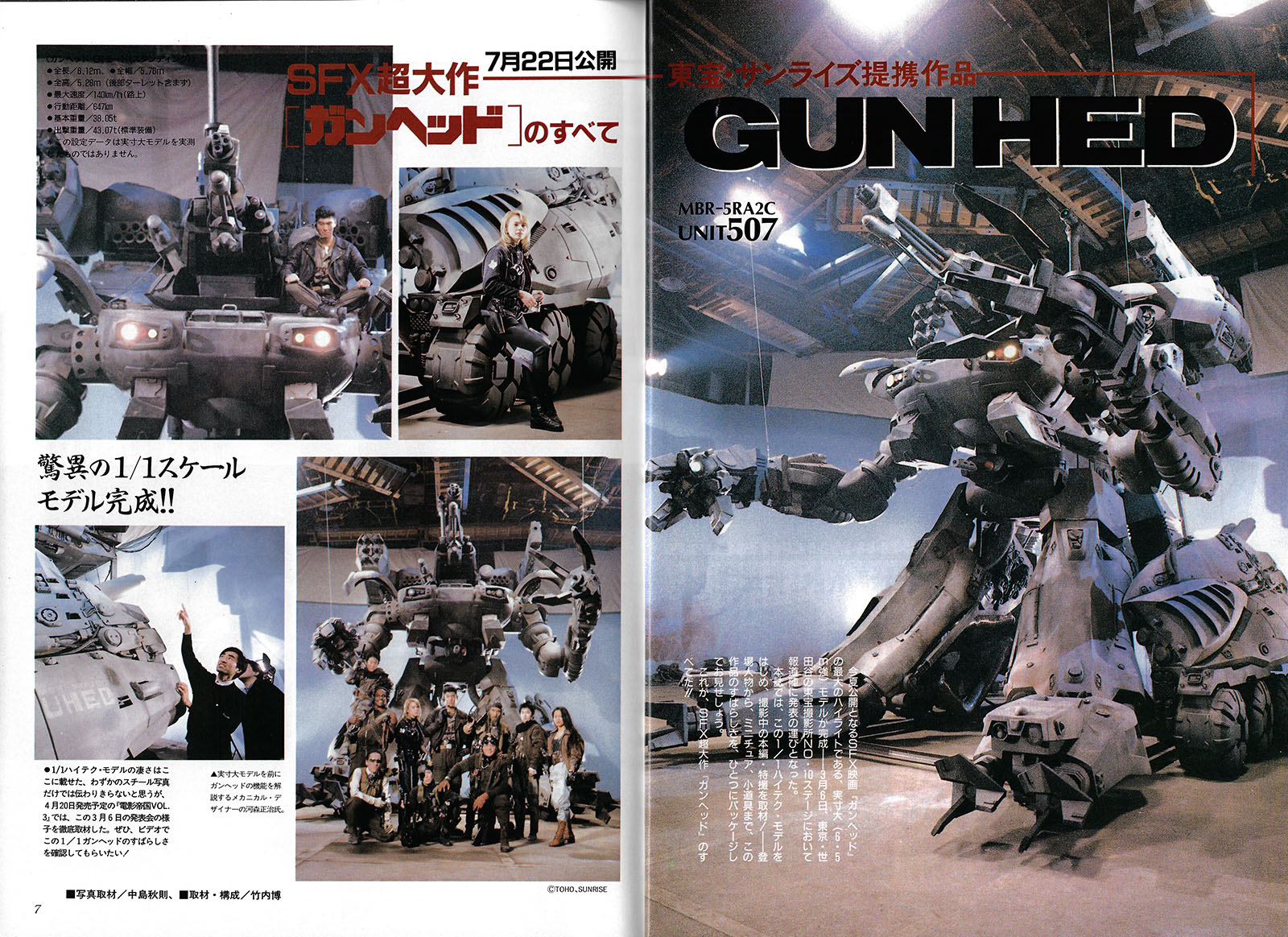 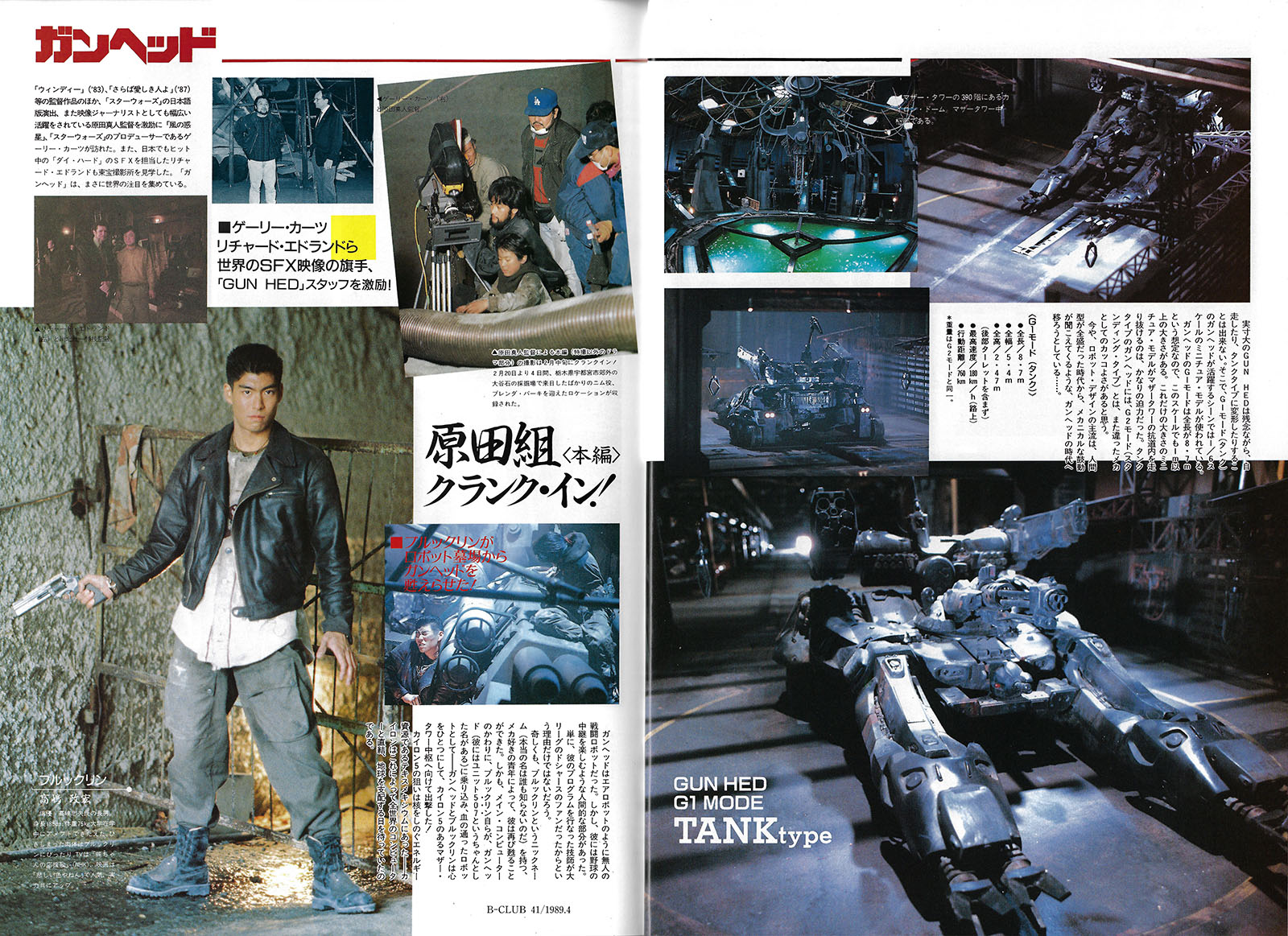 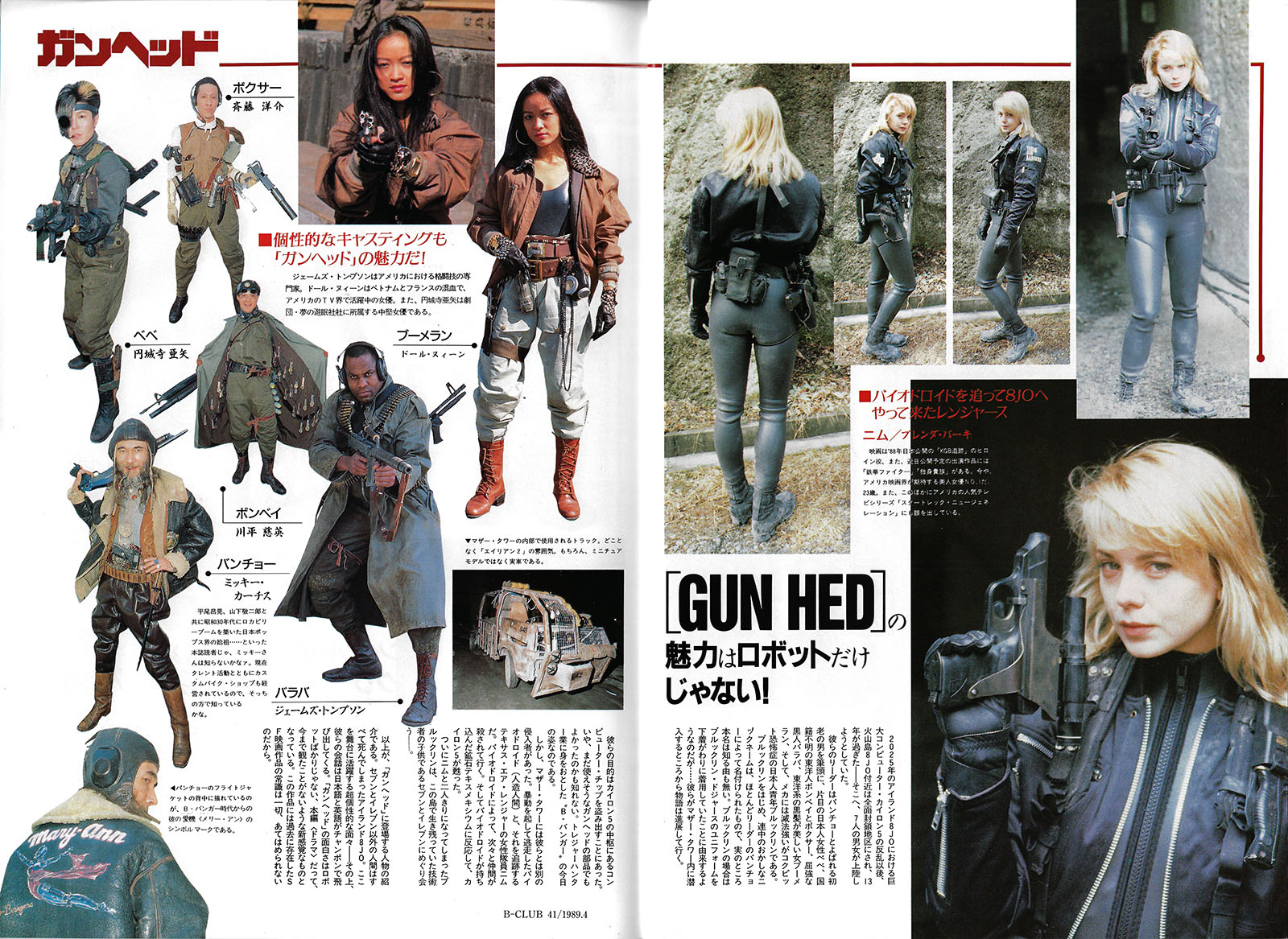 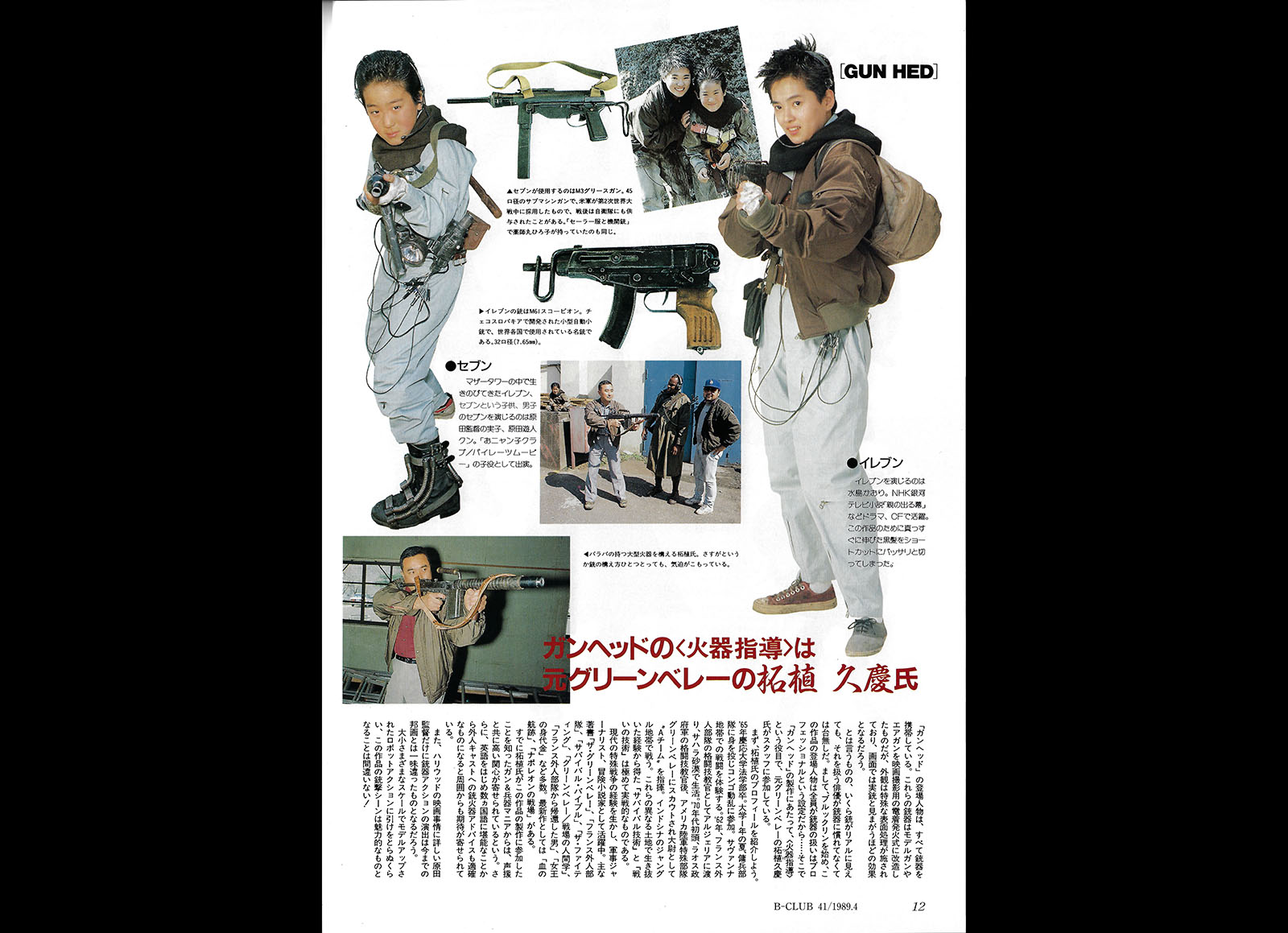 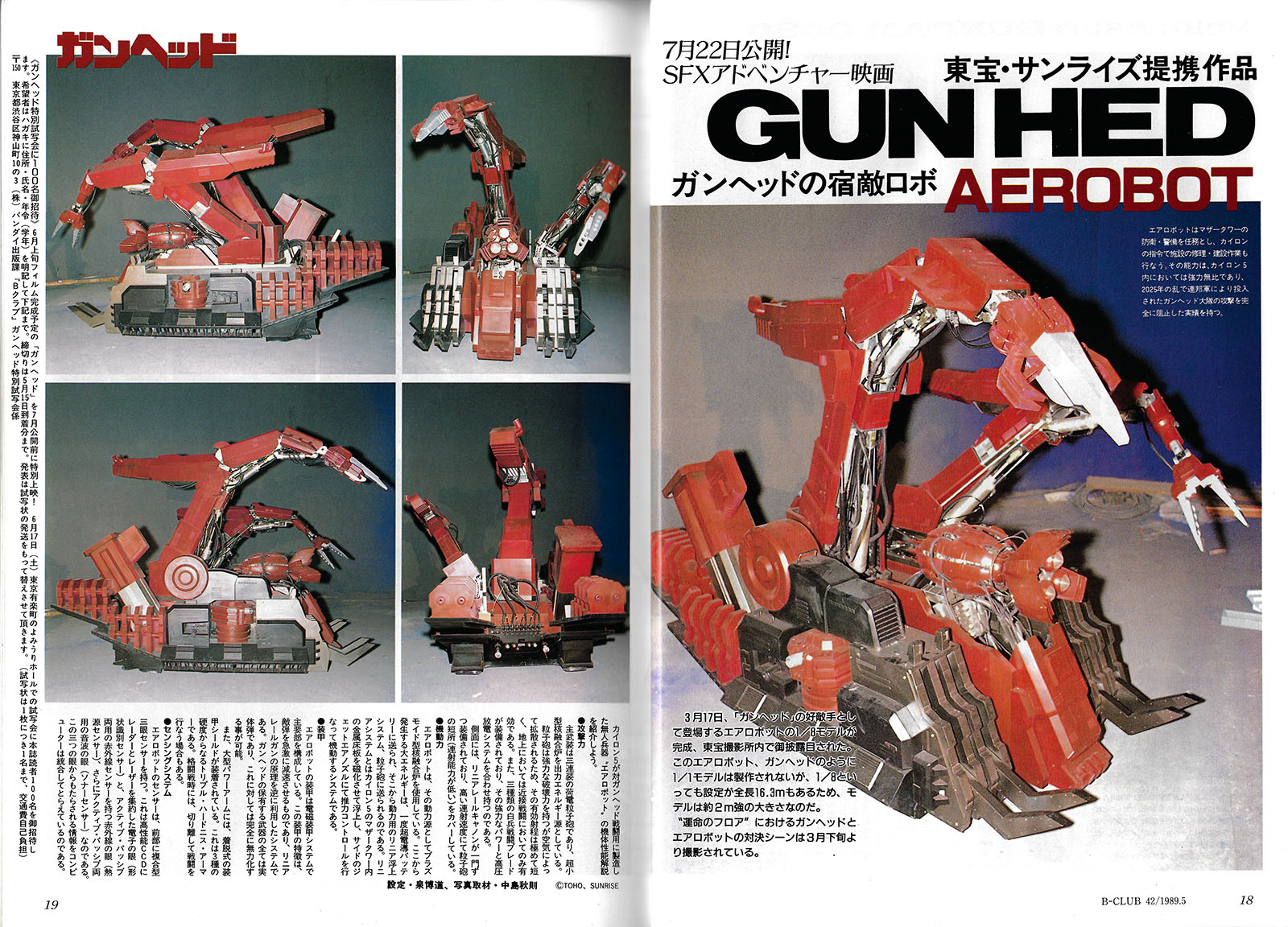 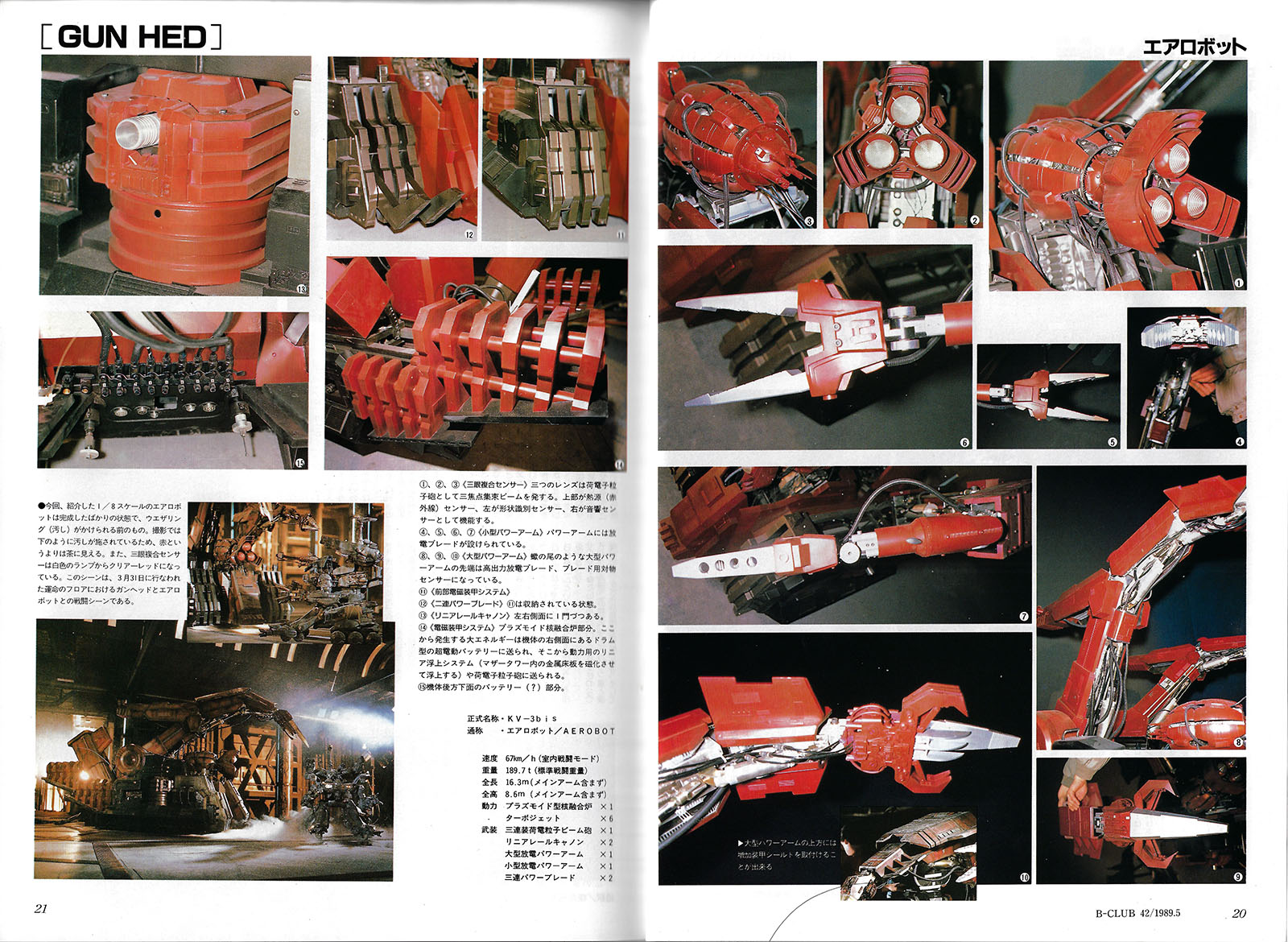 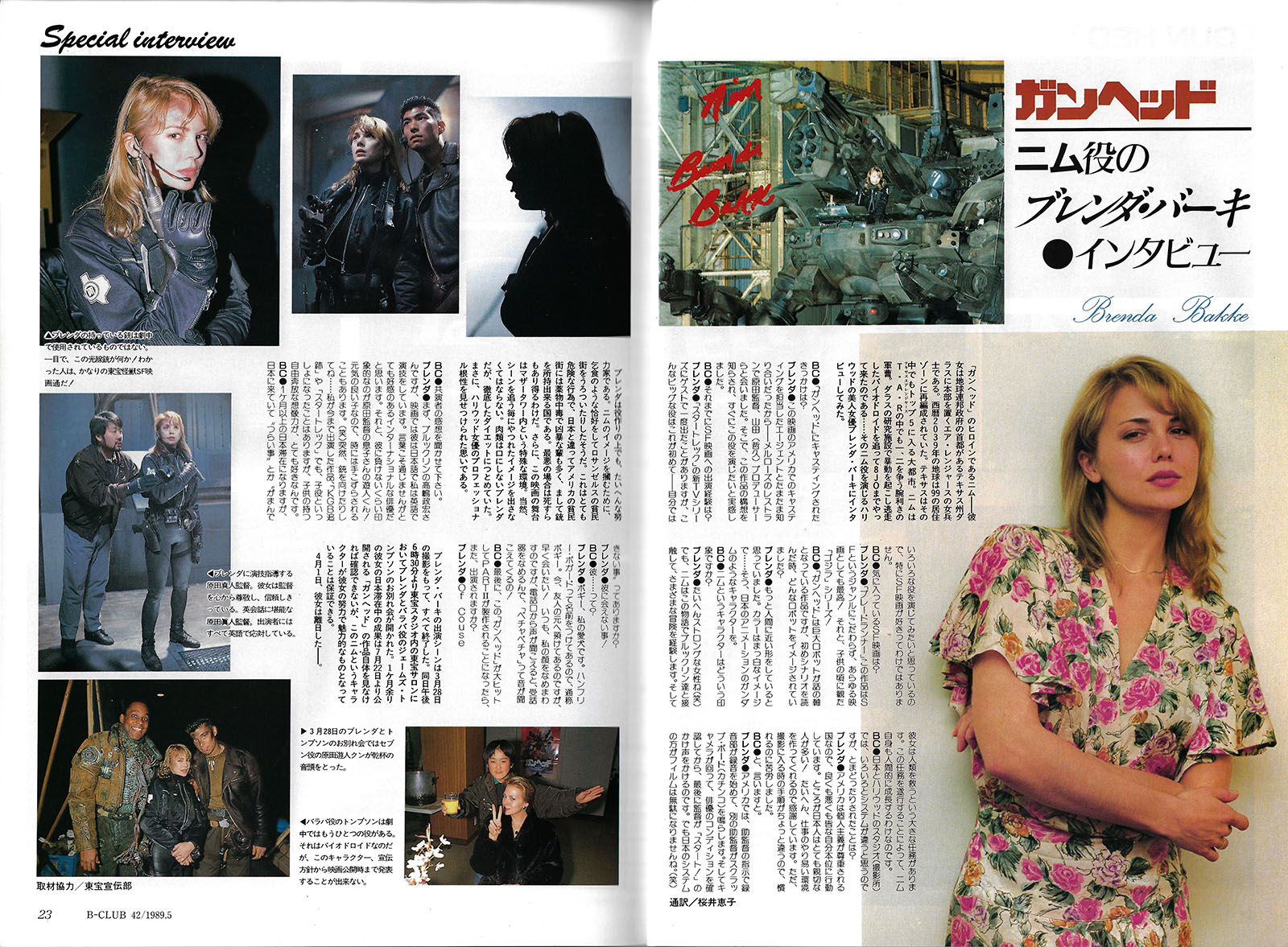 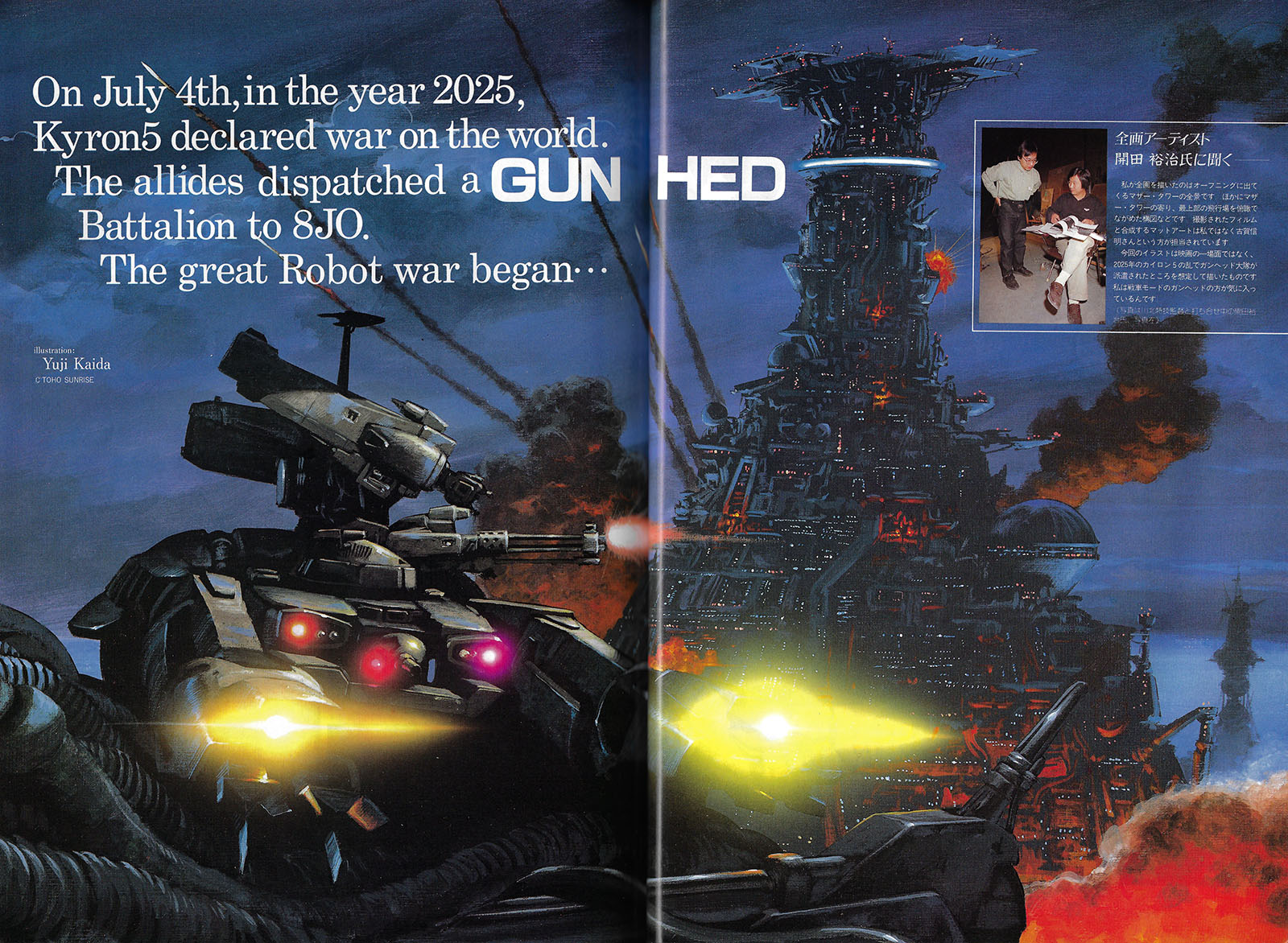 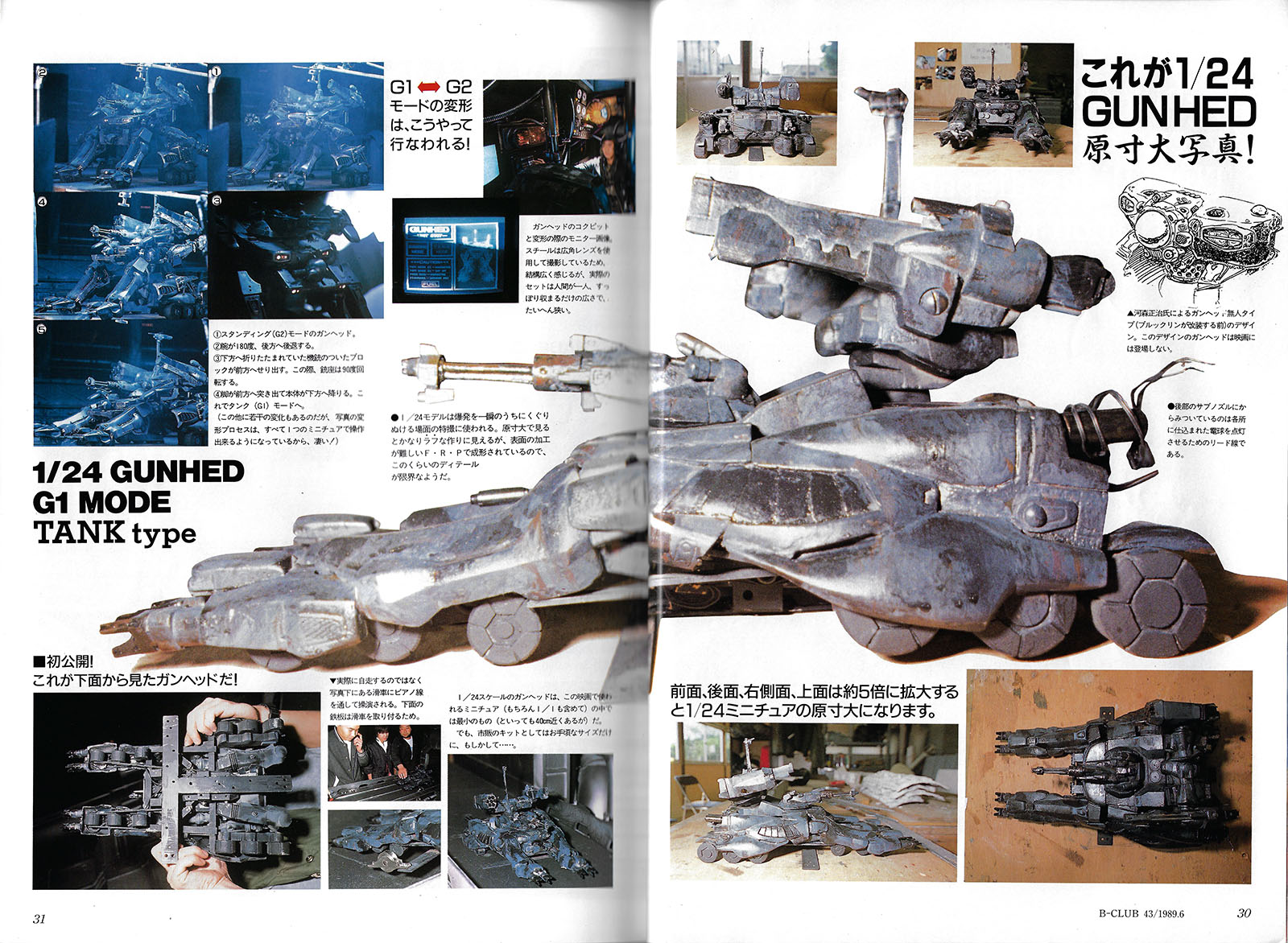 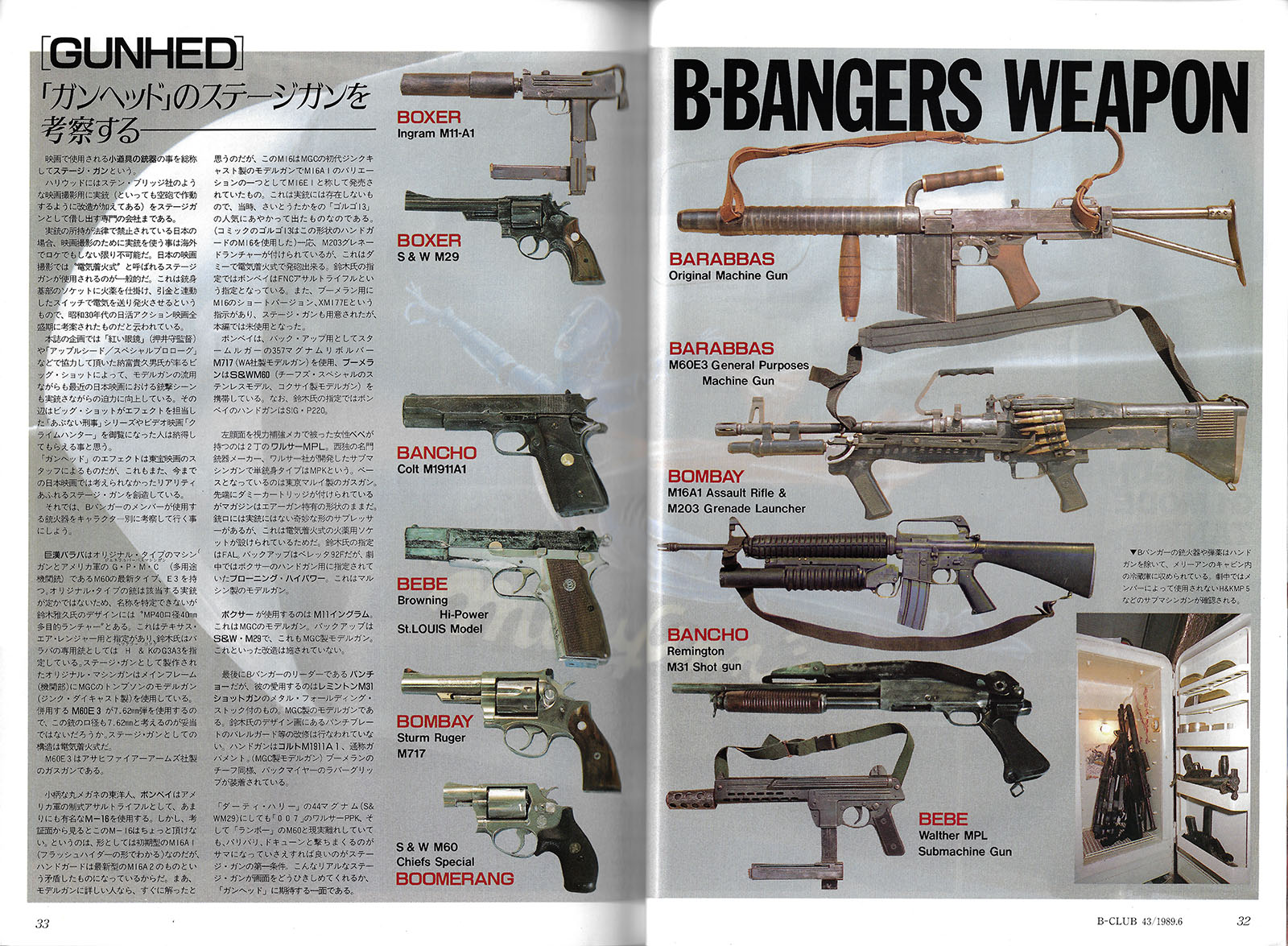 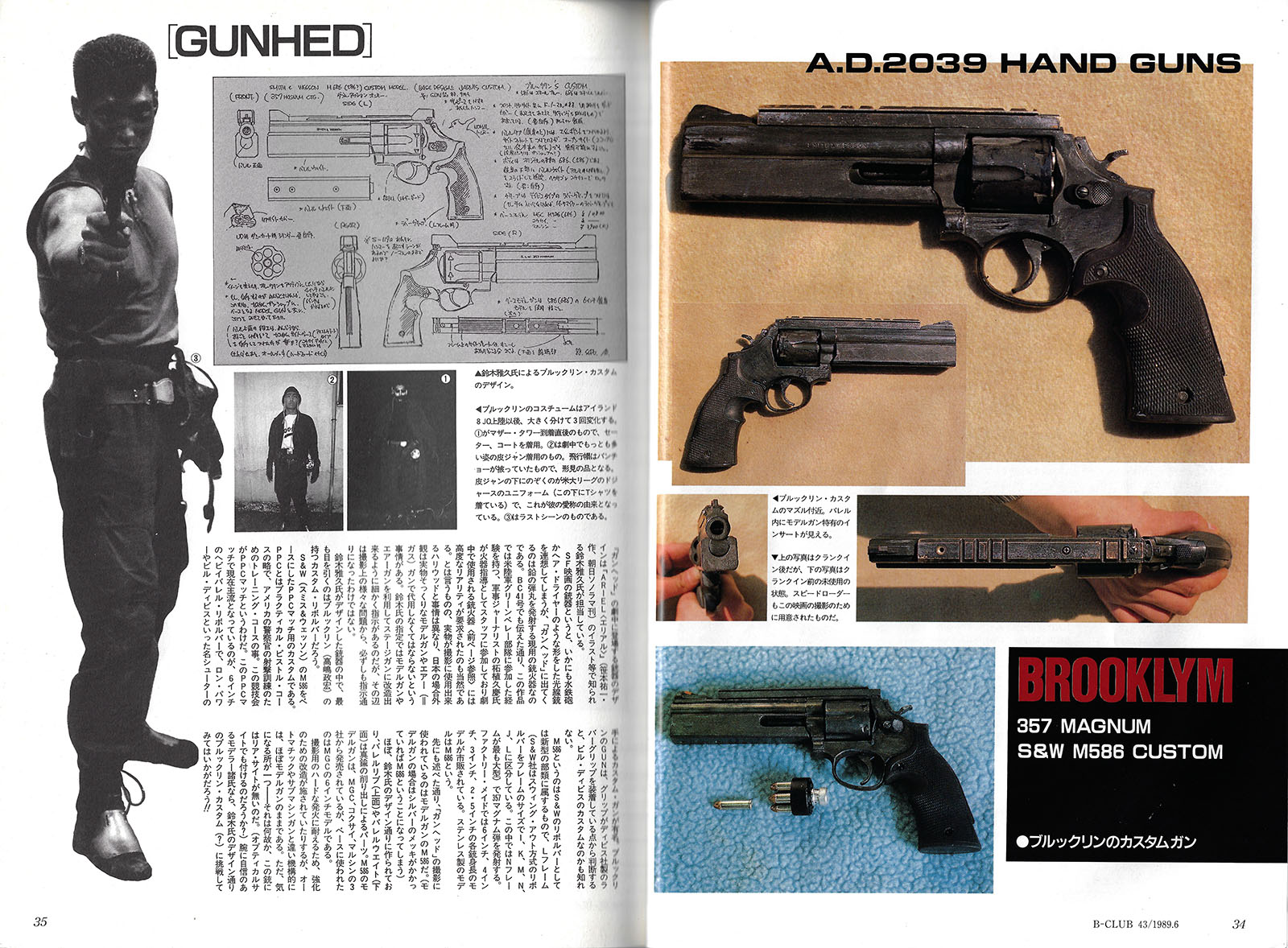 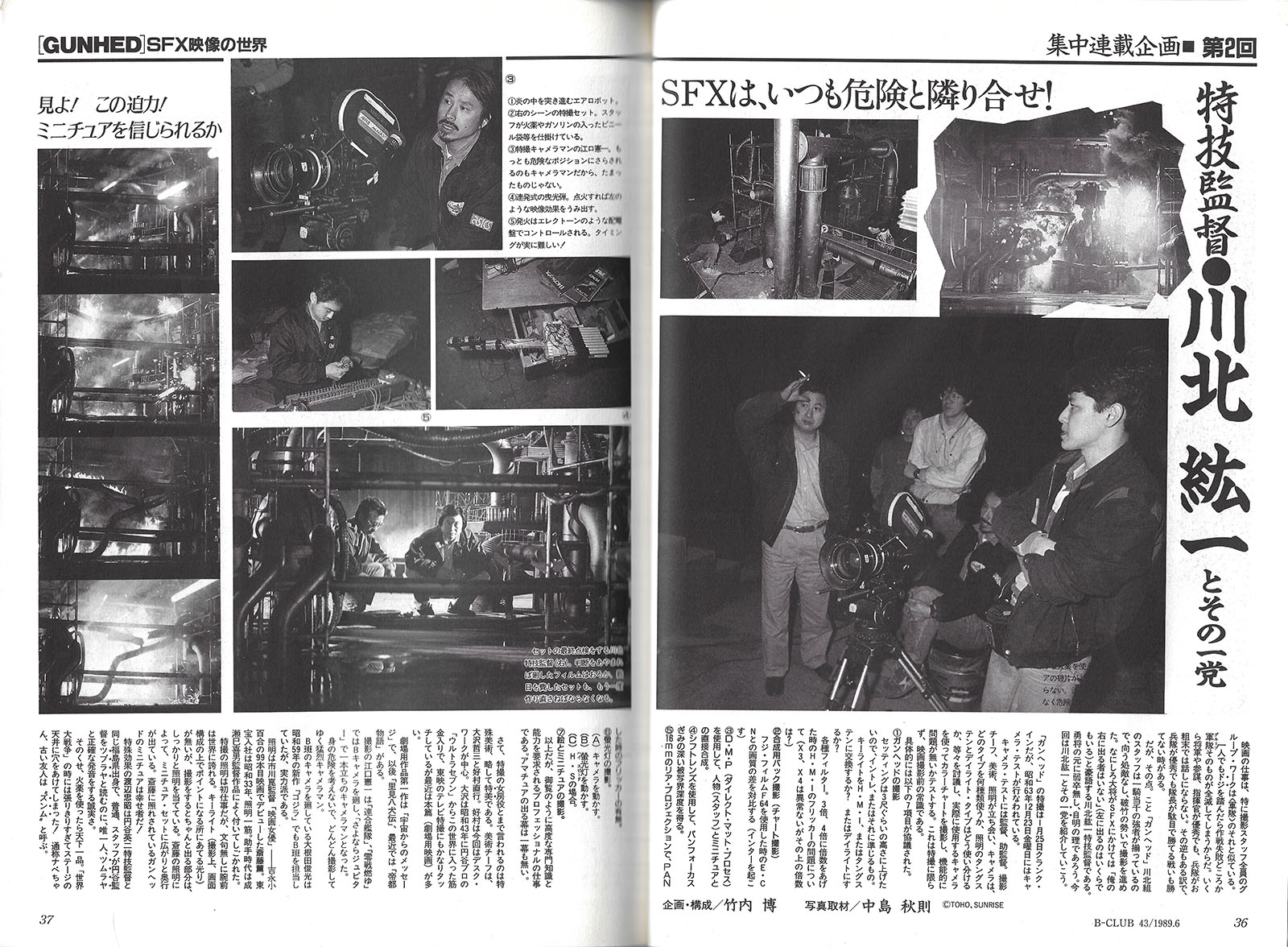 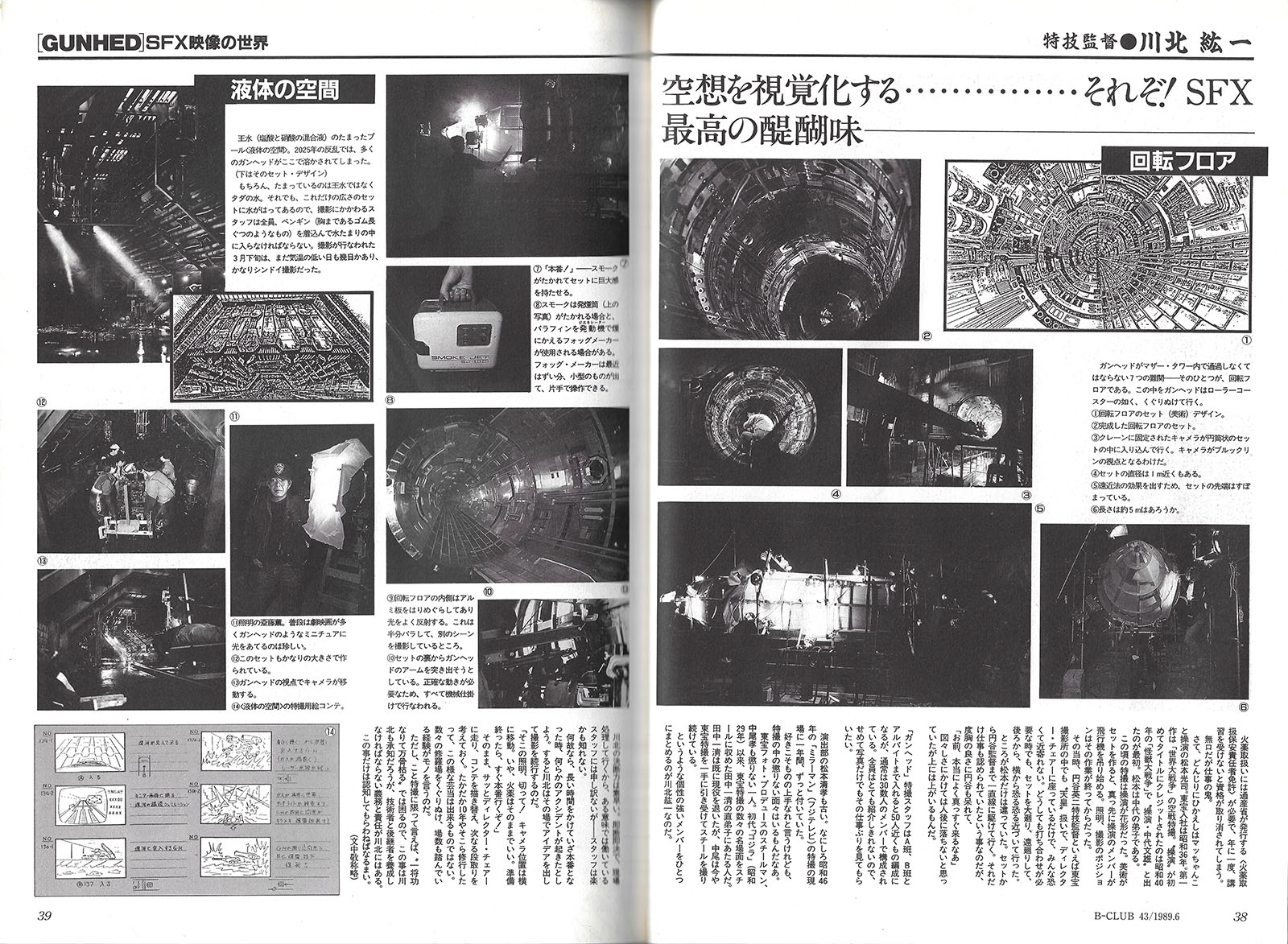 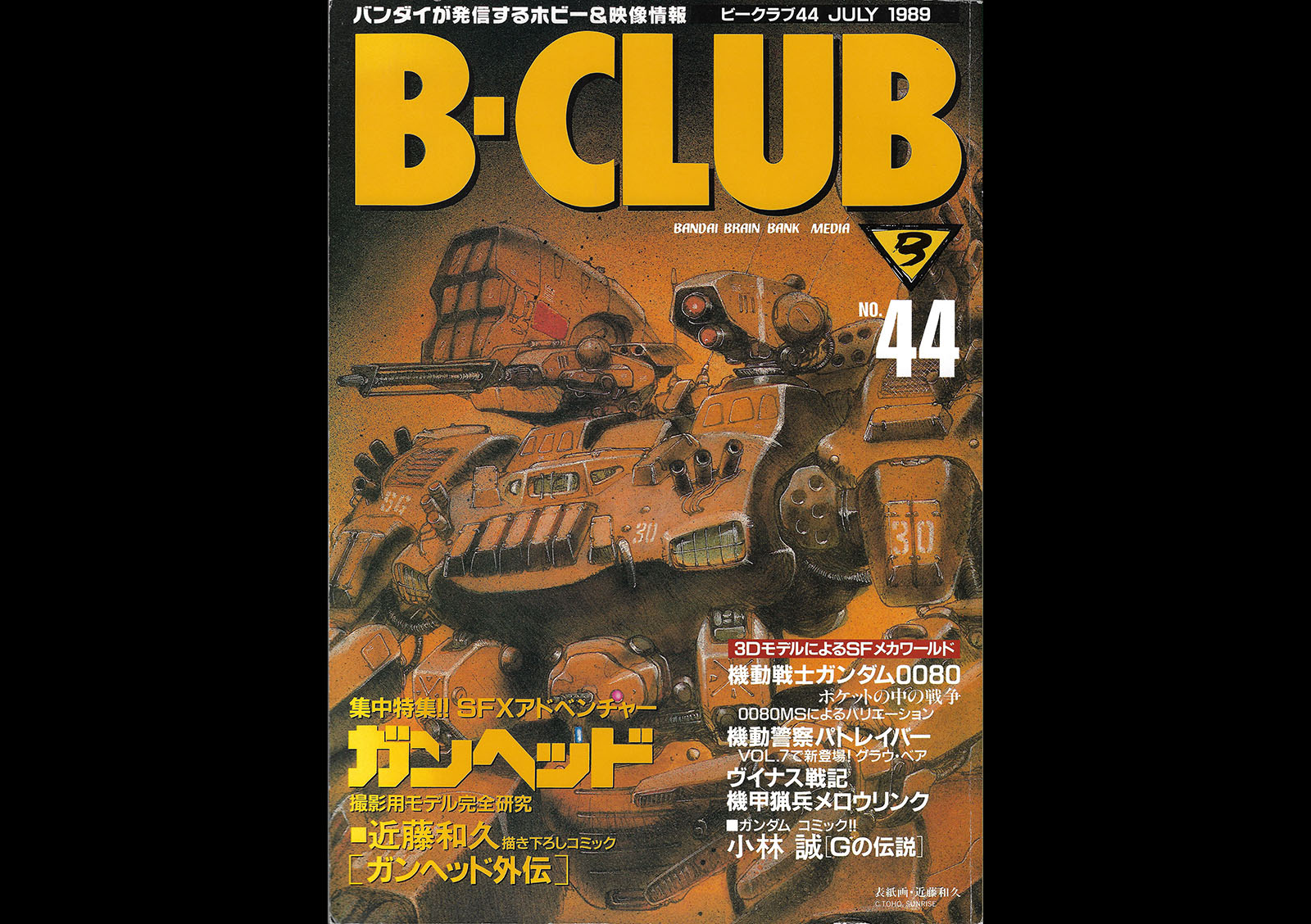 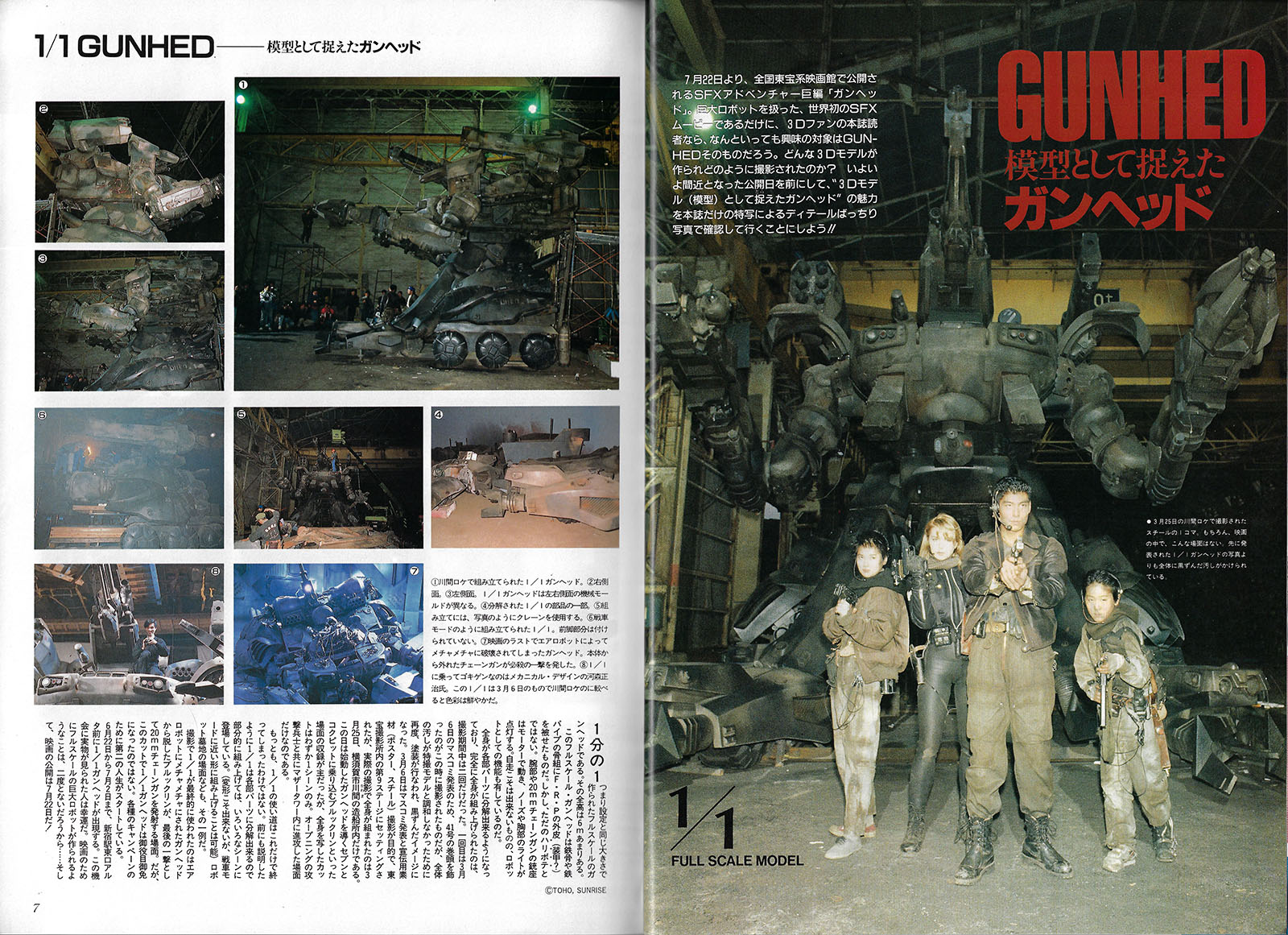 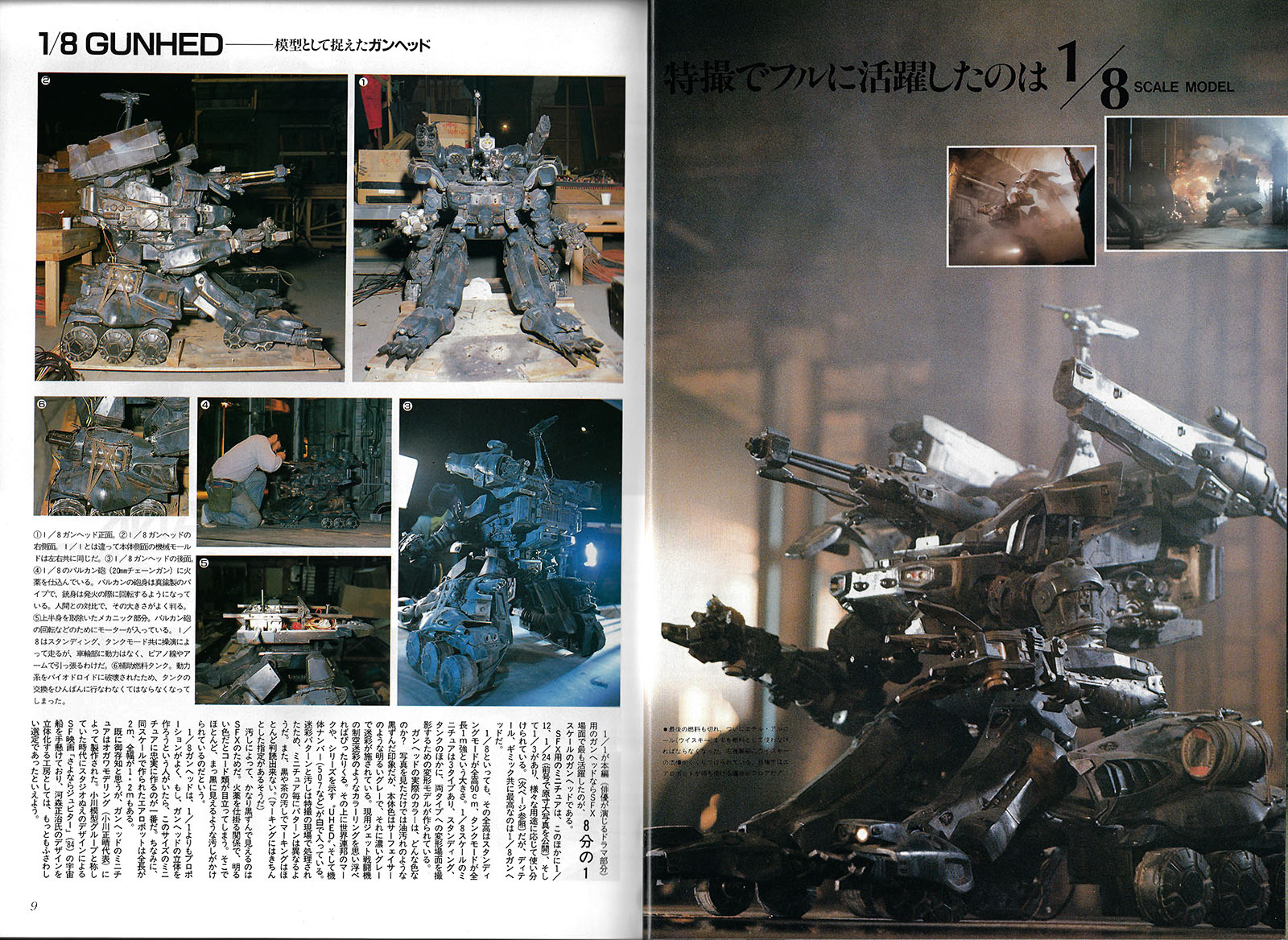 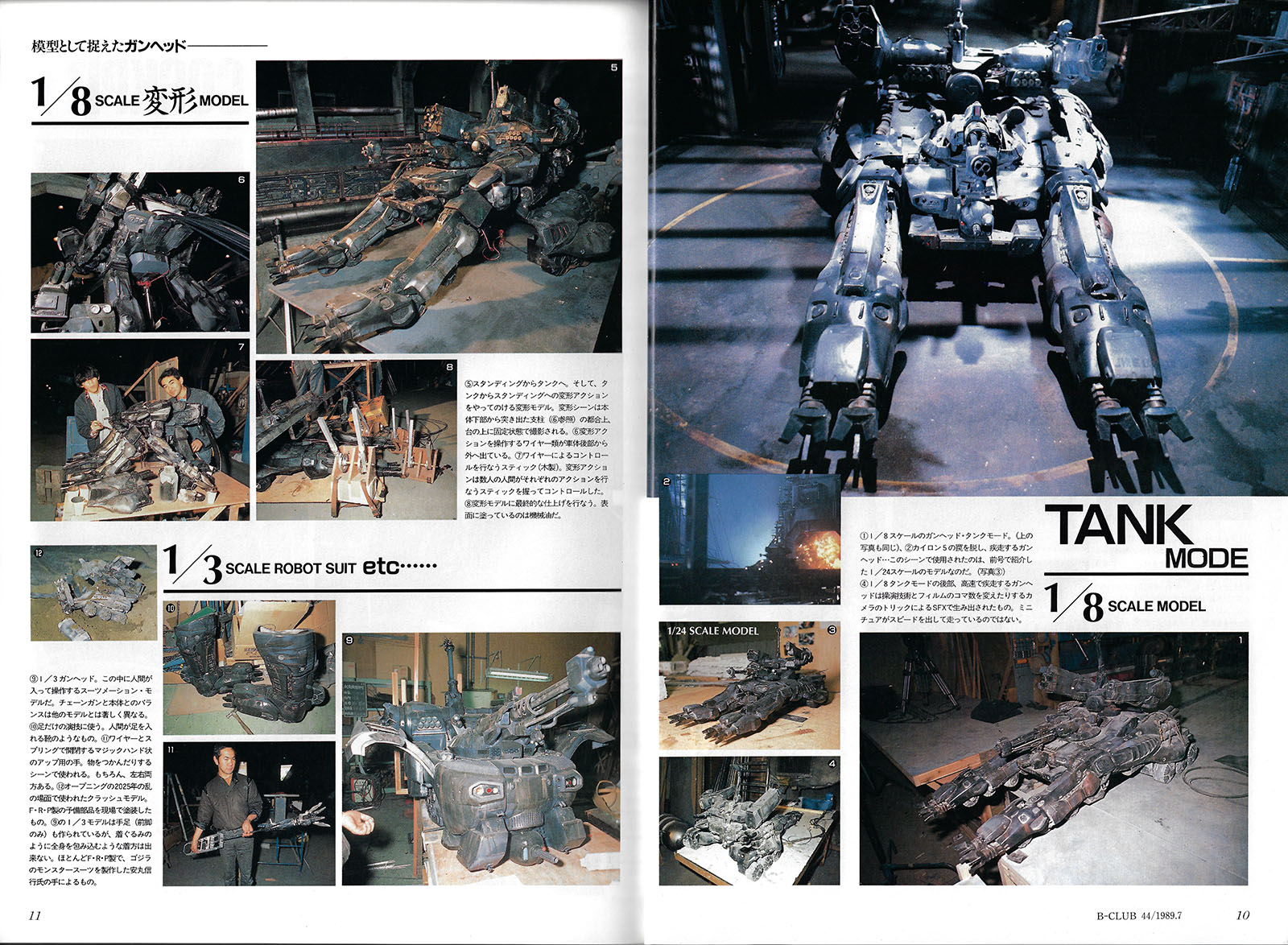 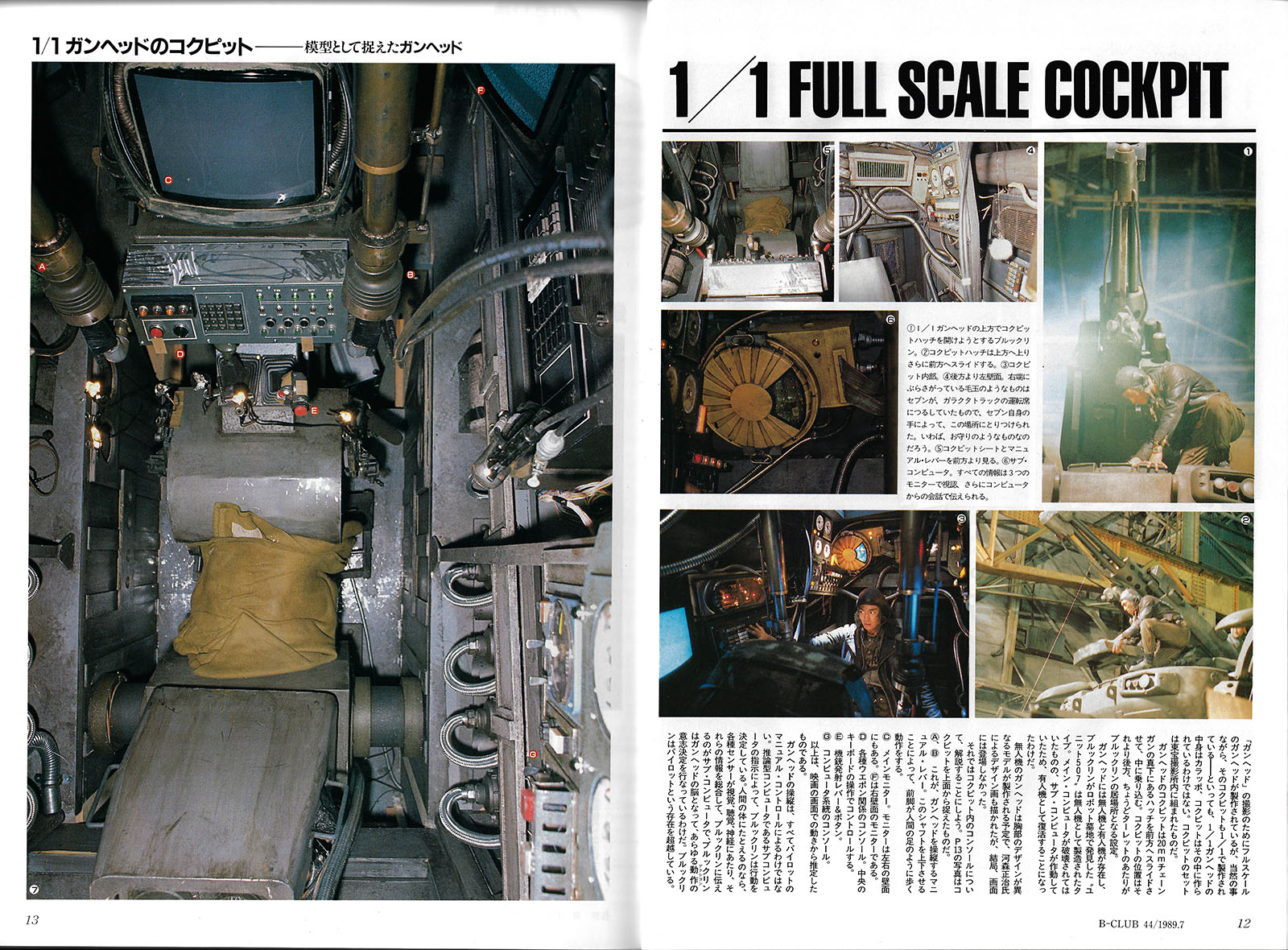 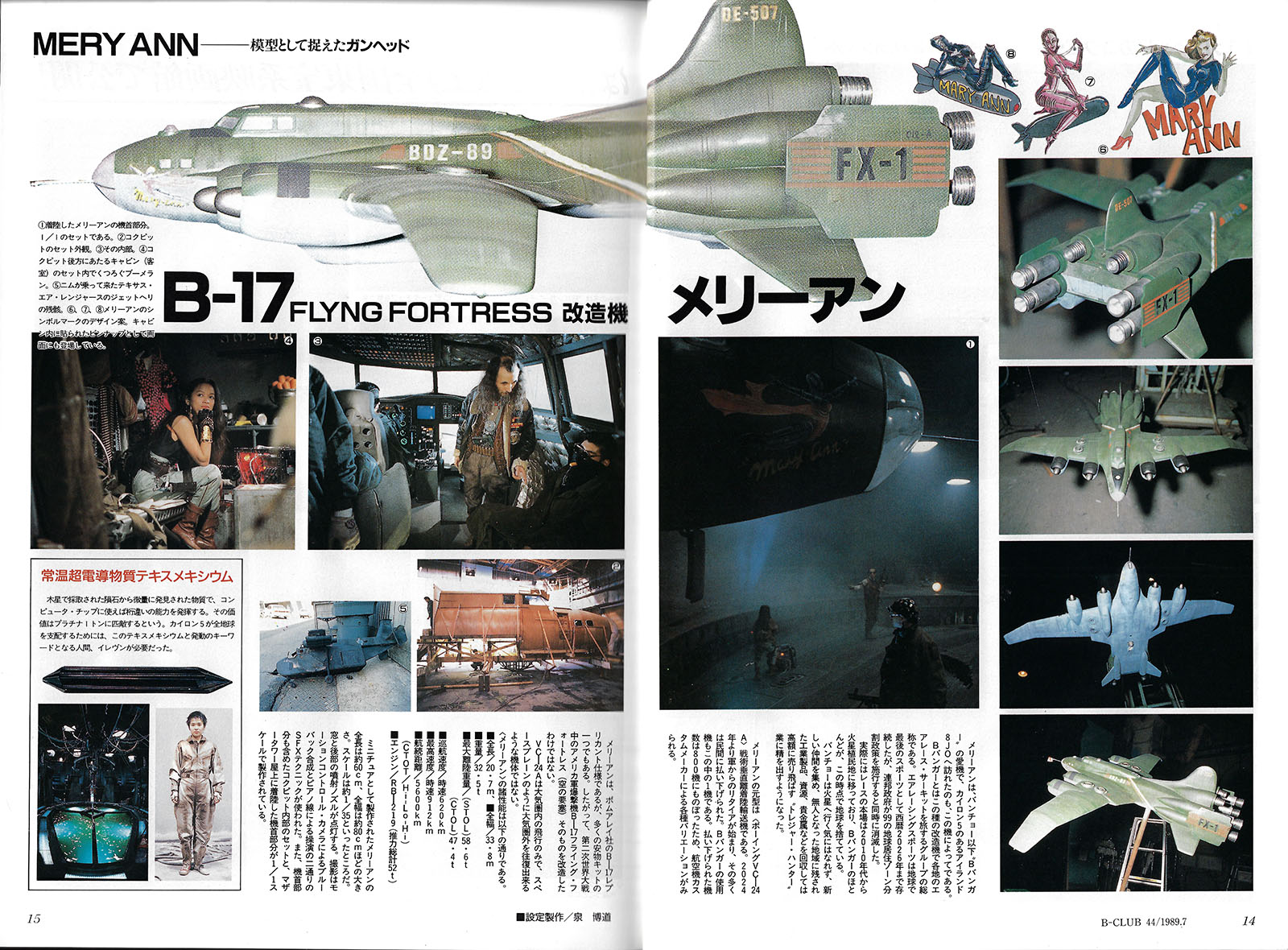 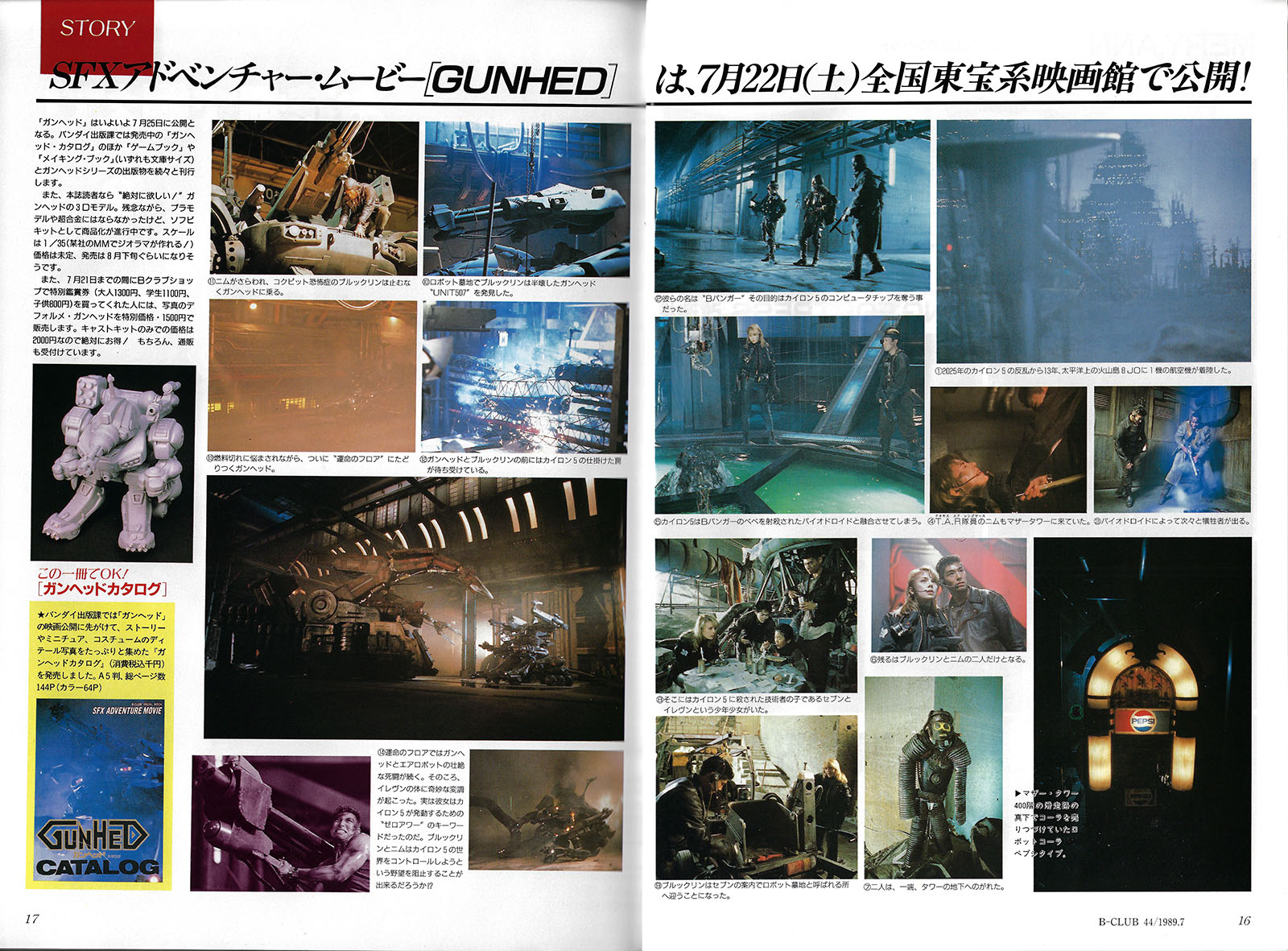 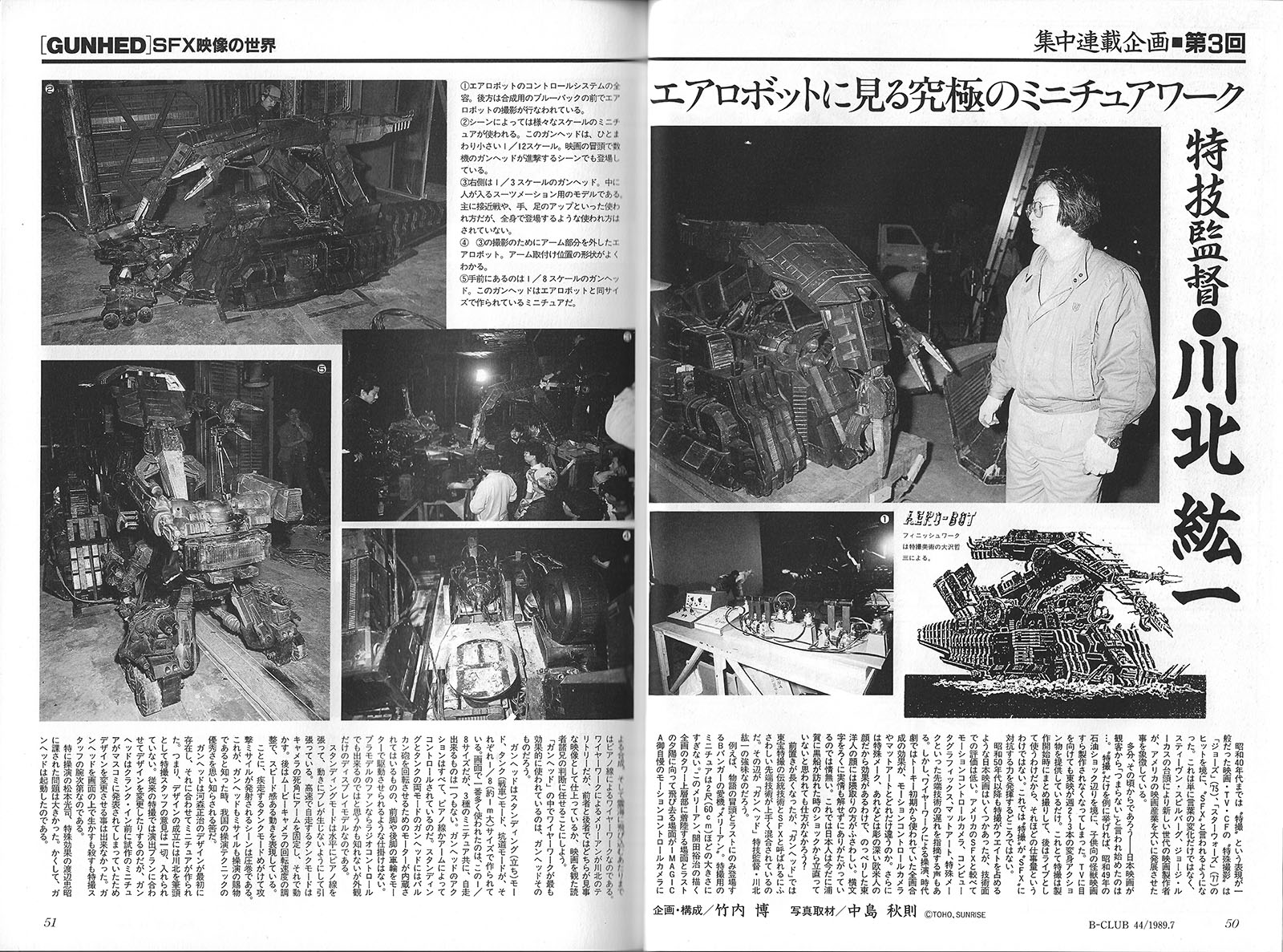 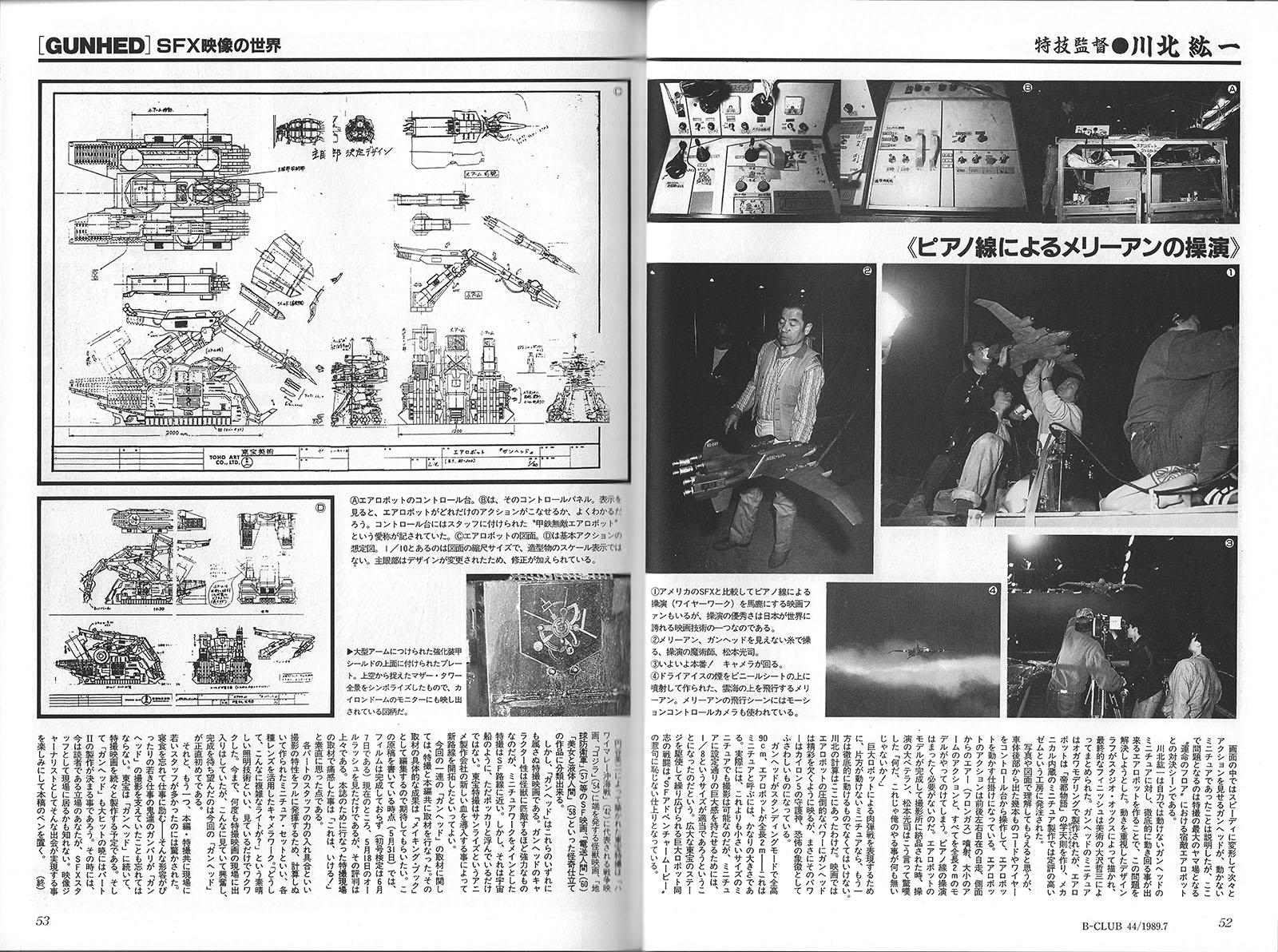 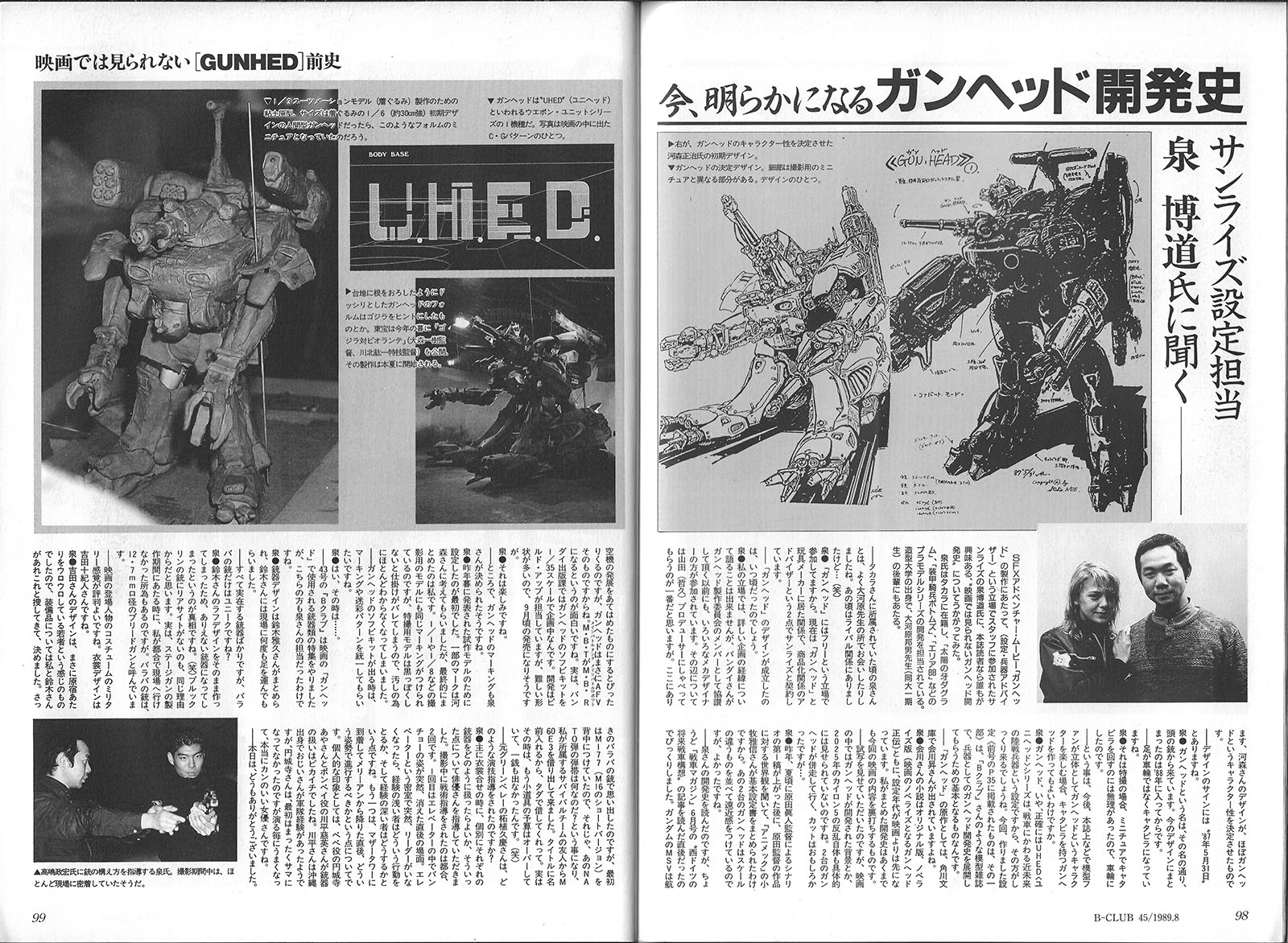 Hiromichi Izumi of Sunrise participated in the production of the SFX adventure movie Gunhed as a “concept and weapons advisor.” Since all the readers of this magazine will be interested, we asked him about the history of Gunhed’s development, which cannot be seen in the movie. Mr. Izumi worked at Takara, and has been involved in the development of plamodel series such as Dougram, Votoms, and Area 88. He is a graduate of Zoukei University and an understudy of Mecha Designer Kunio Okawara (a first-year student at the same University).

Interviewer: How would you describe your relationship with Mr. Okawara when you worked at Takara? We often met at his home. We were rivals back then, but… (Laughs)

Izumi: I’m participating in Gunhed as a freelancer. Currently, I’m an advisor for Gunhed and a toy maker. I have a contract with Sunrise as an advisor for merchandising.

Interviewer: When did the design for Gunhed come into being?

Izumi: I can’t go into the details of how the project came about from my point of view, but I can say that various mecha designers were participating before Bandai joined the Gunhed Production Committee. I think it would be best to have producer Tetsuhisa Yamada talk about that. The design by Shoji Kawamori almost determined the character of Gunhed.

Izumi: As the name implies, “Gunhed” comes from the gun in the head. It was not until the beginning of ’88 that it came together into the current design.

Interviewer: I see that it has caterpillars instead of wheels.

Izumi: In the case of special effects, it was impossible to rotate the caterpillar with miniatures, so we decided to use wheels.

Interviewer: In the future, when model fans enjoy the character of Gunhed as a three-dimensional object in magazines such as this one, is it possible to make one with a caterpillar?

Izumi: Gunhed, or more precisely, the UHED (Unihed) series, is a near-future land warfare weapon that replaces the tank. I think that would be a better fit. The designs shown this time (along with those published in the previous issue) are the basis for the development history of Gunhed as a weapon in a model magazine like B-Club.

Izumi: Mr. Aikawa’s books are the original version set before the movie, and the novelization of the movie. The development history I’ve compiled only supports the content of the film.

Interviewer: I’ve seen a preview of the film; the background of Gunhed’s development and the specifics of the Kyron 5 uprising in 2025 are not shown. It was interesting to see the shot of two Gunheds running together….

Izumi: Last summer, after the first draft of the script by director Masato Harada was completed, we listened to Director Harada’s worldview and Masanobu Komaki of Animec magazine put together the basic concepts. The two Gunheds are in different scales to give a sense of perspective. It was great.

Interviewer: When I read your development history, I was surprised because I’d just read an article titled “West Germany’s Future Tank Concept” in the June issue of Tank magazine. Gundam‘s MSV (Mobile Suit Variation) fits perfectly with the development of aircraft, and Gunhed is the very definition of AFV. It’s interesting that it can be a Main Battle Tank, and a Main Battle Robot.

As a matter of fact, Bandai is planning to produce a soft vinyl kit of Gunhed in 1/35 scale. Due to the many difficult shapes, it will likely be released around September.

Interviewer: By the way, I heard that you also decided on the markings on Gunhed.

Izumi: It was first set up for the prototype model that was released late last year. Some of the marks were thought up by Mr. Kawamori, but I was the one who finalized them. The same markings were applied to the 1/1 and 1/8 models for filming. The special effects model had to be blackened to reveal the mechanisms, which made the markings almost invisible.

Interviewer: When Gunhed’s soft vinyl kits come out, I’d like to see the same markings and camouflage patterns.

Izumi: Yes, at that time…

Interviewer: In issue 43 of B-Club, we did a feature on the firearms used in the movie. You were in charge of this as well, weren’t you?

Izumi: Masahisa Suzuki was in charge of firearms design. He visited the production site many times.

Interviewer: All of the firearms are real, but Barabbas’ gun is unique, isn’t it?

Izumi: It was based on Mr. Suzuki’s rough design, so it’s true that it became an unbelievable firearm. (Laughs) I believe Brooklyn’s gun doesn’t have a rear sight for the same reason. Actually, during the time that the stage guns were in production I wasn’t able to go to the site. Barabbas’ gun is called a 12.7mm caliber bleed gun.

Interviewer: The military feel of the costumes for the characters in the film is well received. The costume design is by Tokito Yoshida, isn’t it?

Izumi: Mr. Yoshida’s design is just like what a young man would wear, hanging around Harajuku. [A youth fashion district in Tokyo.] As for the equipment, Mr. Suzuki and I searched around and decided on a few things. I remember Barabbas’ earlier gun. At first, he had an M177 (a short version of M16) on his back. Then I asked myself, “What’s with that NATO ammunition belt?” So I borrowed an M60E3 from a friend in my survival team. He said I could borrow it for free if I put his name in the credits. Actually, at the time, we were already over budget for props and didn’t have a penny to spare. (Laughs)

Interviewer: What kind of acting instruction did Kyukei Tsuge, formerly of the Green Berets, give them?

Izumi: He instructed the actors individually on how to handle each firearm, mainly during the costume fittings. He gave us tactical guidance twice during the shoot. The first time was in the elevator, right after Bancho suddenly disappeared. If your leader suddenly disappeared in a closed room like an elevator, what would an inexperienced person do? And what would someone with experience do?

The other point was how to proceed immediately after arriving at the mother tower and getting off Mary Ann. My personal impression is that Aya Enjoji as Bebe and Jie Kawahira as Bombay were the best in handling firearms. Mr. Kawahira is from Okinawa and his grandfather had military experience. Ms. Enjoji was not good at first, but she got better and better with each performance. She’s an actress with really good instincts.

Interviewer: Thank you very much for your time. 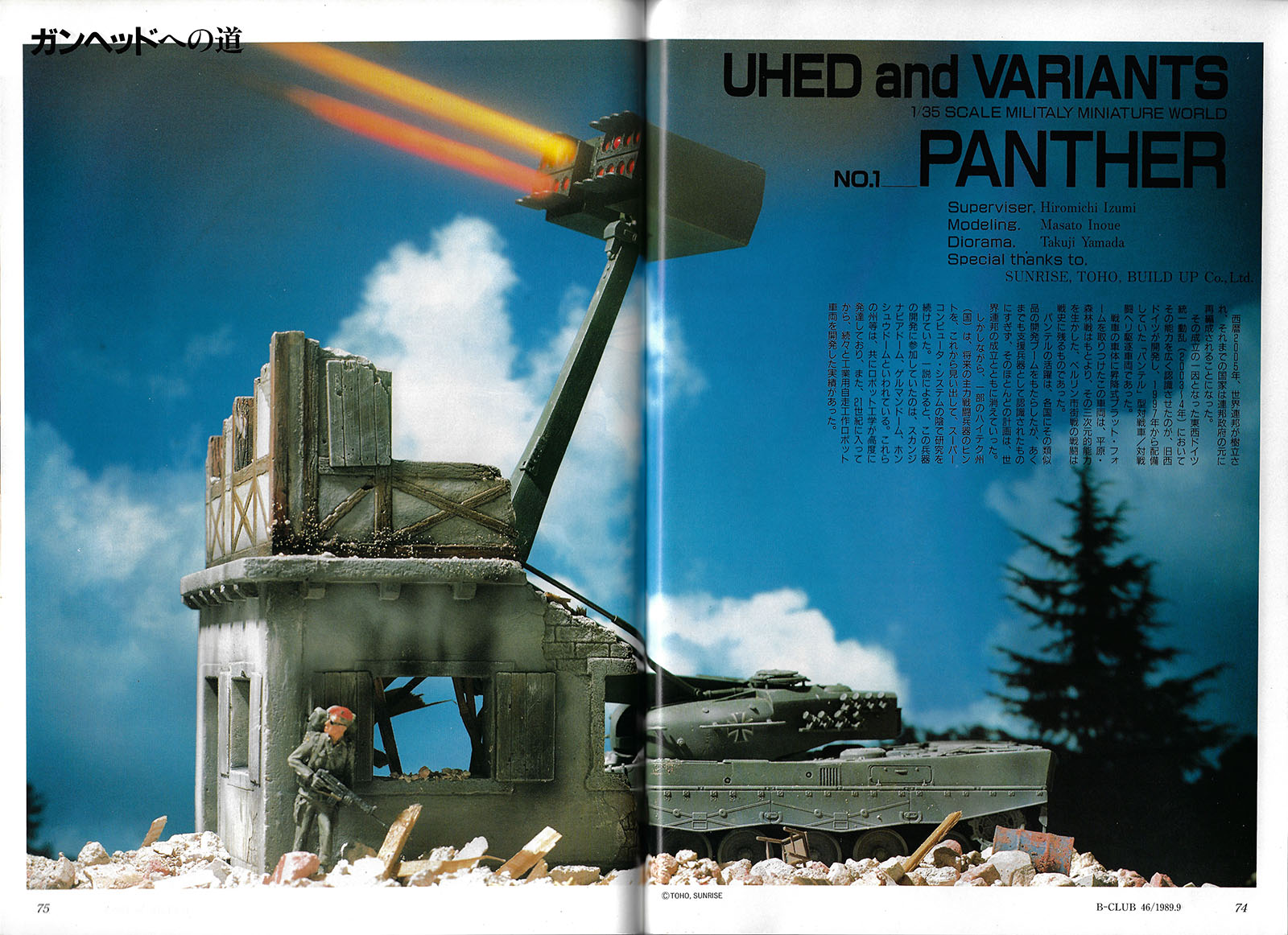 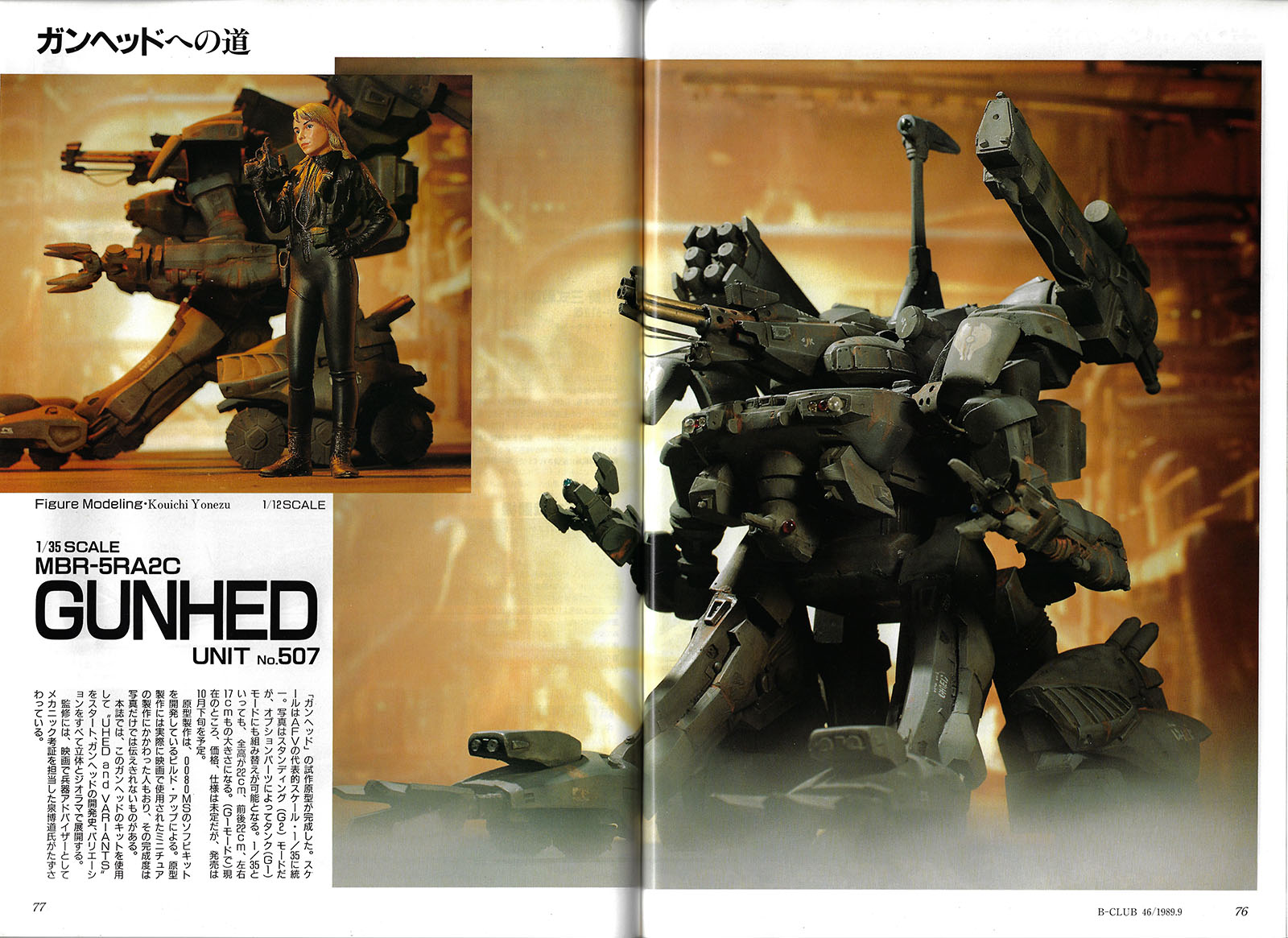