The invasion of Independence Colony has placed its citizens between two rival forces, but neither is what it appears to be. As we get closer to the truth, the line blurs between ally and enemy until they become indistinguishable. When all is revealed, nobody will walk away as the person they once were. 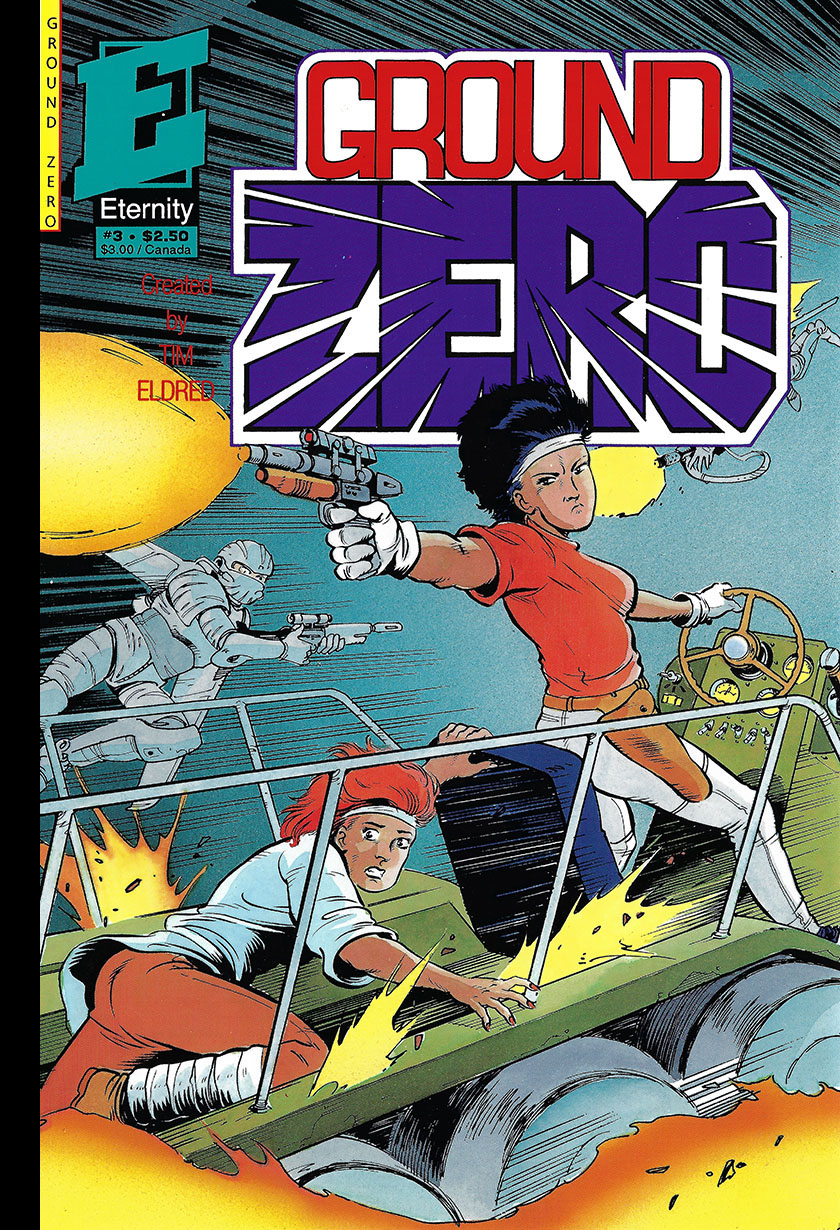 Never before seen by anybody (except those who worked on it)! The concluding chapters of Ground Zero were fully written, penciled, and inked. Covers were drawn and colored. But the issues were never published. To this day, it’s still one of the unhappiest moments of my publishing career. It’s one of the primary reasons I decided to create this website. So let’s get into it and finally put things right.

Right from the start, I always believed the most important part of being a comic book pro is to get your damn work done on time. It’s okay not to be the best artist in the world. You can work on that issue by issue. But if you don’t make your deadlines, you can’t expect a publisher to give you that chance. AND you’ll let down everyone who depends on you.

Missing deadlines is what killed these two issues. The worst part is, it wasn’t me who missed them.

The projected publication dates were December ’91 and January ’92. My work on them finished many months earlier, at which point I turned them over to my inker, Steve Krueger. He’d done a bangup job on the first two issues, so I didn’t expect anything less. But unbeknownst to me, Steve was at the end of his financial rope.

Since he came on board to ink BROID in 1989 and stayed with me through Chaser Platoon in 1990, he’d gotten steadily more accomplished. We were both improving together, month after month. He took another leap forward with Ground Zero #1, and I was greatly encouraged by his progress. But because Malibu Comics paid inkers a lot less than pencillers, he was struggling to get by. After finishing Ground Zero #2, he finally had to surrender and go find a job that paid a living wage. 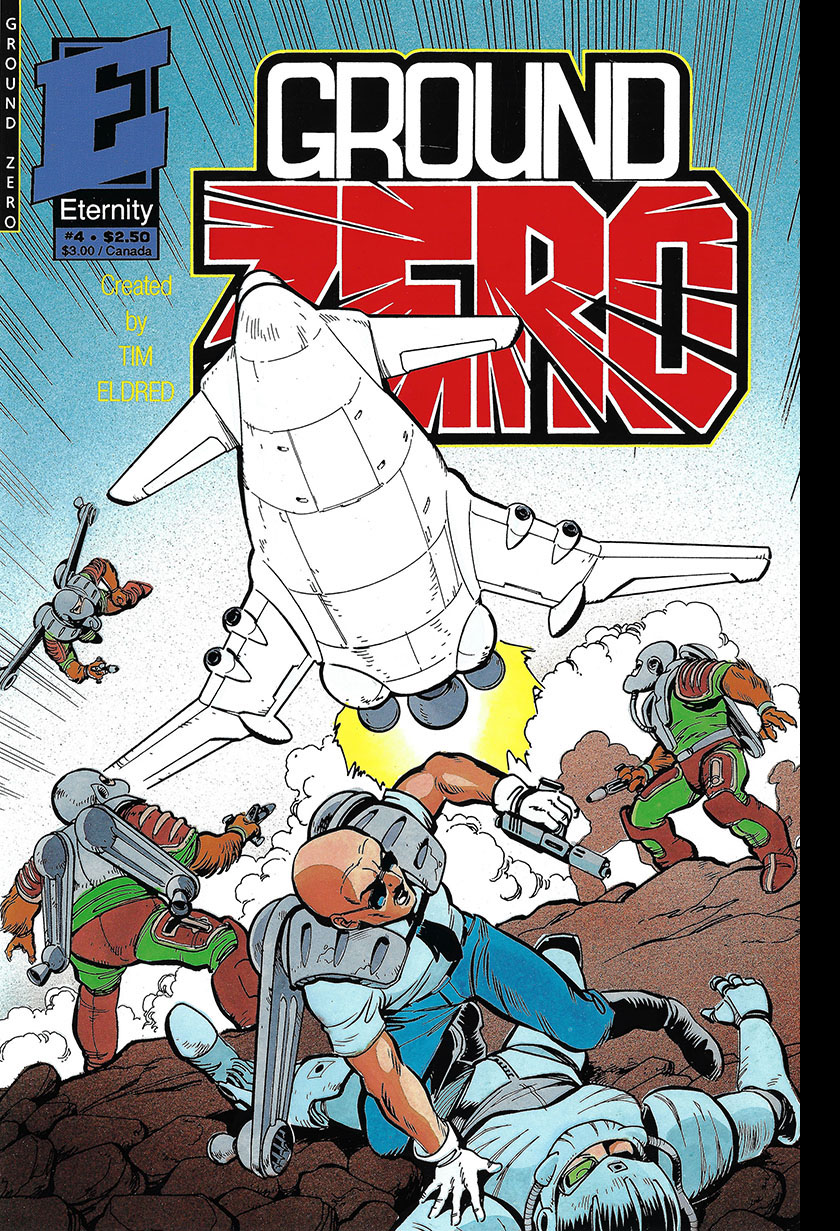 Of course, I couldn’t hold that against him. I knew he wasn’t being paid enough to live on, and I didn’t want him to ruin his life for my comic book projects. He called me as he was starting on Ground Zero #3 and said he wouldn’t be able to finish the issue. But he had found a substitute, a friend named Bruce Lewis. Bruce was a fellow anime fan, and I’d “met” him in the pages of an APA we both participated in. I knew he could draw and Steve was confident in him, so I went with it. Boy, I wish I hadn’t.

Bruce was not the right inker for this book. His drawing style and mine were not in harmony. I went for realism, but he was a cartoonist. I wanted texture and detail, he wanted to draw with as few lines as possible. I’d been going at it every day for years, he was driven by whimsy. Neither approach is inherently wrong, but they did not sync on the page. By the time I saw what Bruce was doing, it was too late to intervene.

In fact, it was “too late” in every way. Months dragged by. The first two issues came and went, and Bruce was still inking. A couple of months after issue 2 was out, my editor at Malibu called me up and said he was canceling the rest of the series. He’d waited as long as he could without violating the trust of distributors and retailers, and there was still no sign of the work from Bruce. That was the end of it.

I was so unhappy with what I had seen, I considered it a mercy killing. At that point, I actually preferred cancellation. Like BROID, it was a case of premature print death. A dark reminder of how little control we have over our fate. And I LOVED this story. It deserved to be read. Now, fortunately, it can be.

Below are both issues in two forms: my original penciled & lettered versions and the finished versions, which did get done. Eventually. I recommend looking at the finished versions only as a learning opportunity, to see what happens when oil tries to mix with water. You’ll see the last of Steve’s work in issue 3 with Bruce in collaboration. Bruce inked all of issue 4 solo. Unfortunately, I would never get to work with Steve again. 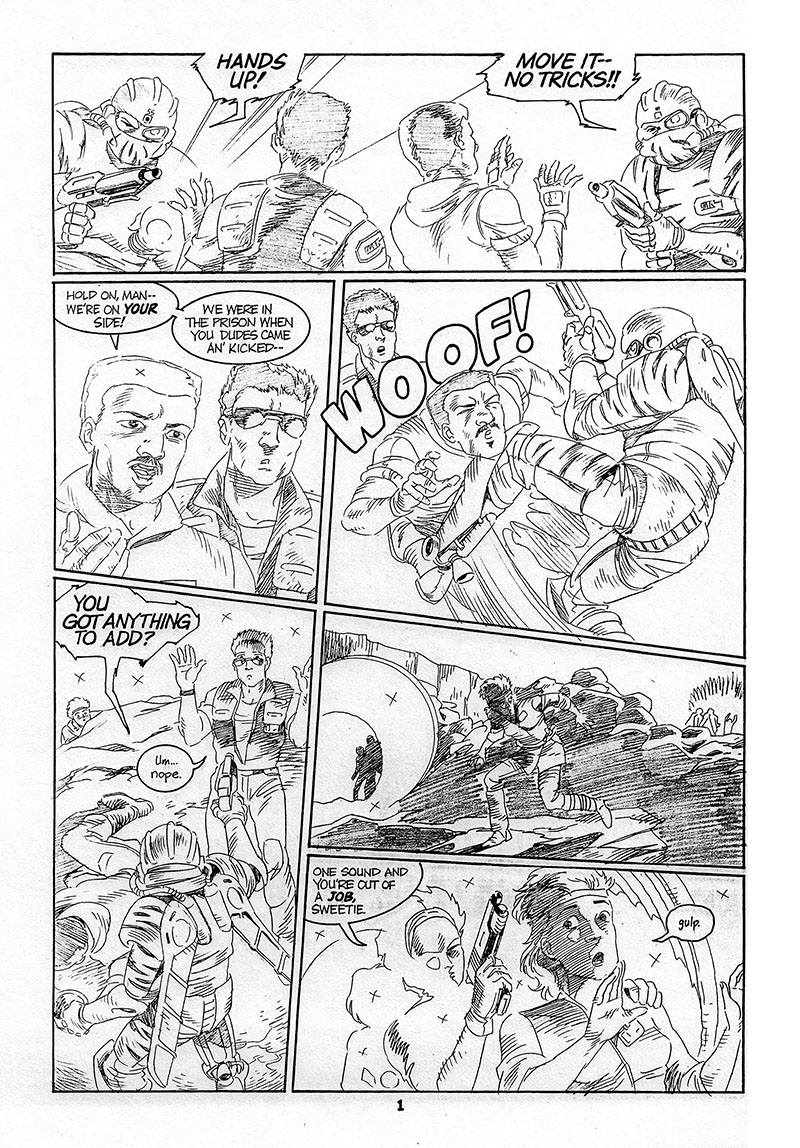 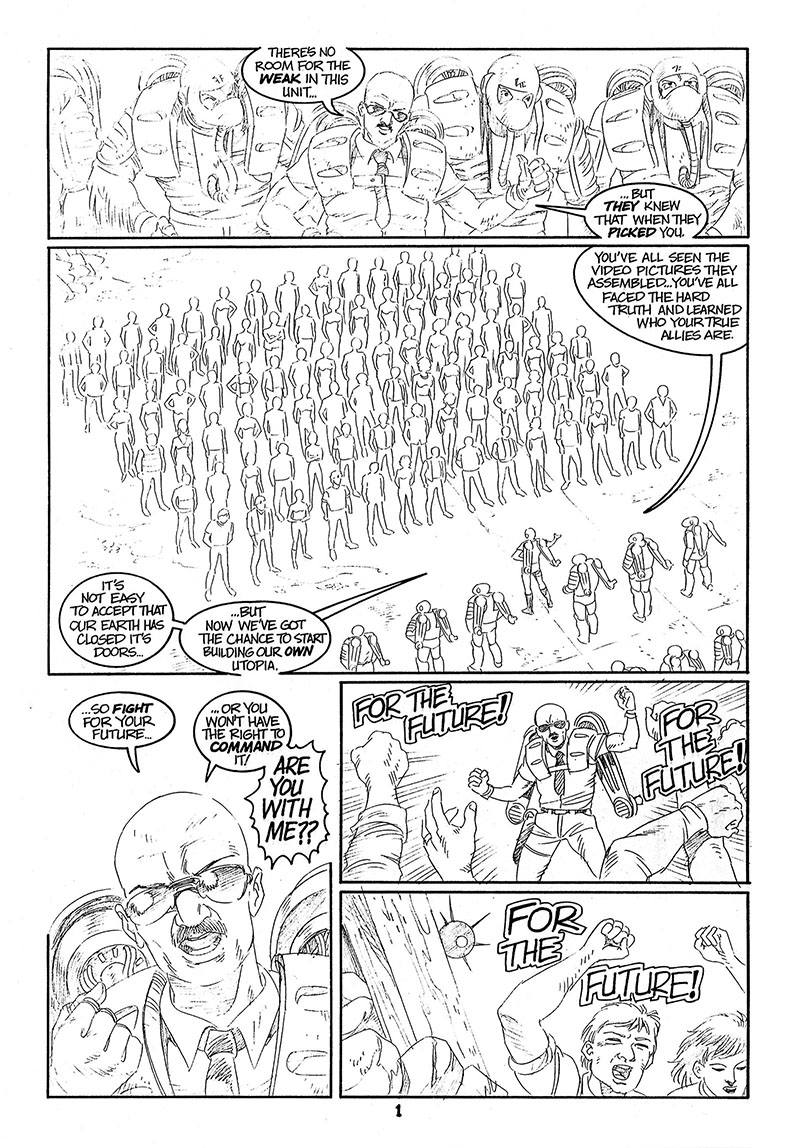 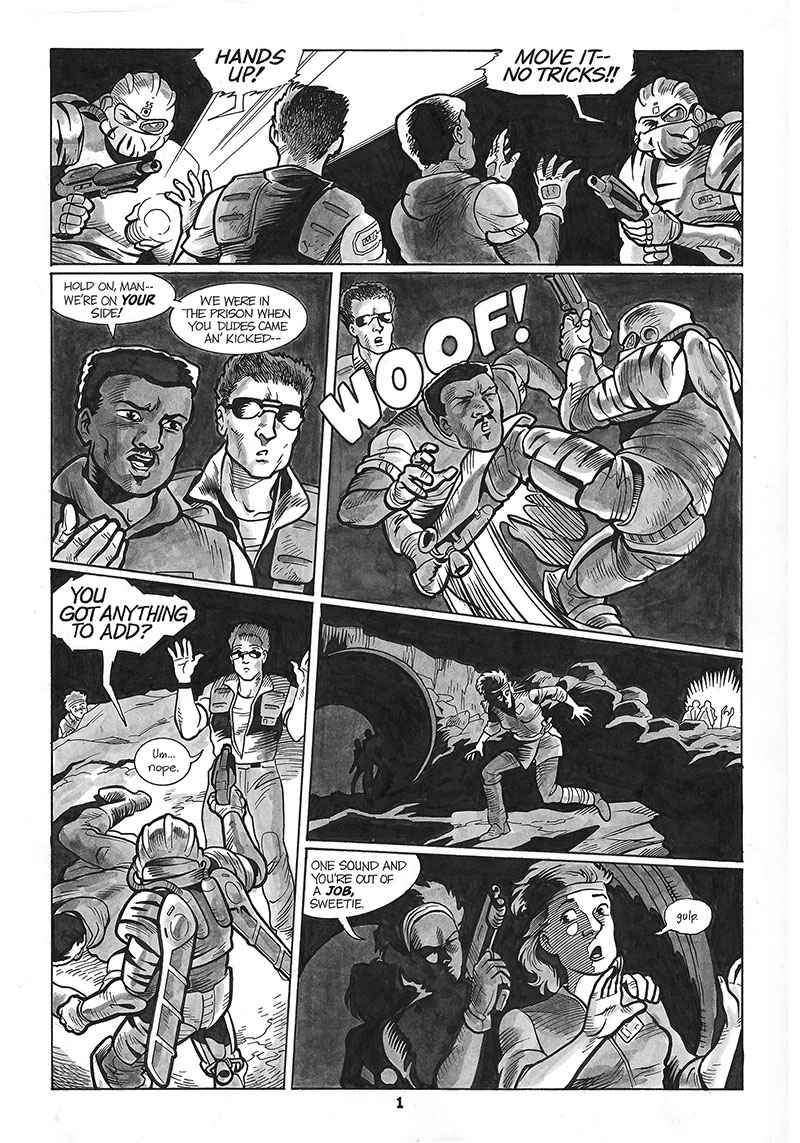 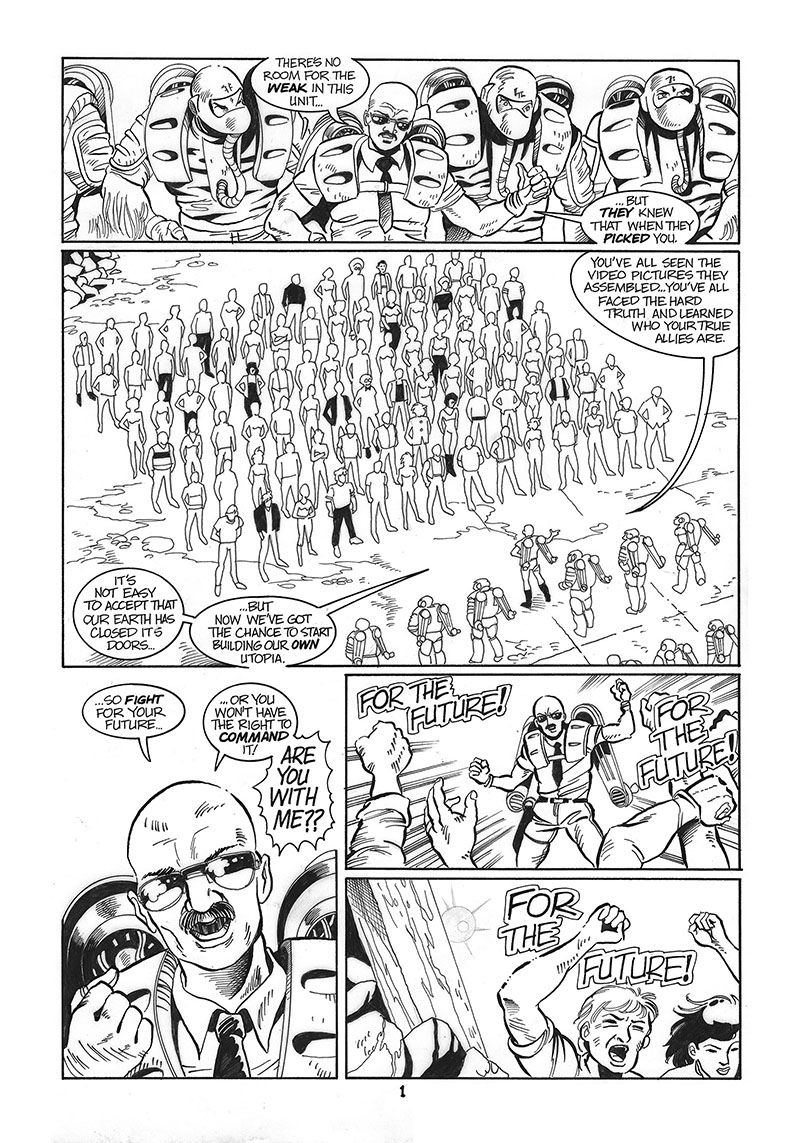 Postscript: despite this rough start between Bruce and me, fate would bring us together in a way neither of us could have predicted. In 1993, when Malibu Comics went into expansion and needed an in-house graphic designer, I suggested Bruce. To my amazement, they hired him. Once we were together in the same office, a close friendship began that would last many years and eventually put us into business together, making comics we never even dreamed we could.

Obviously, there’s a lot more to be said about those adventures. So stick around!