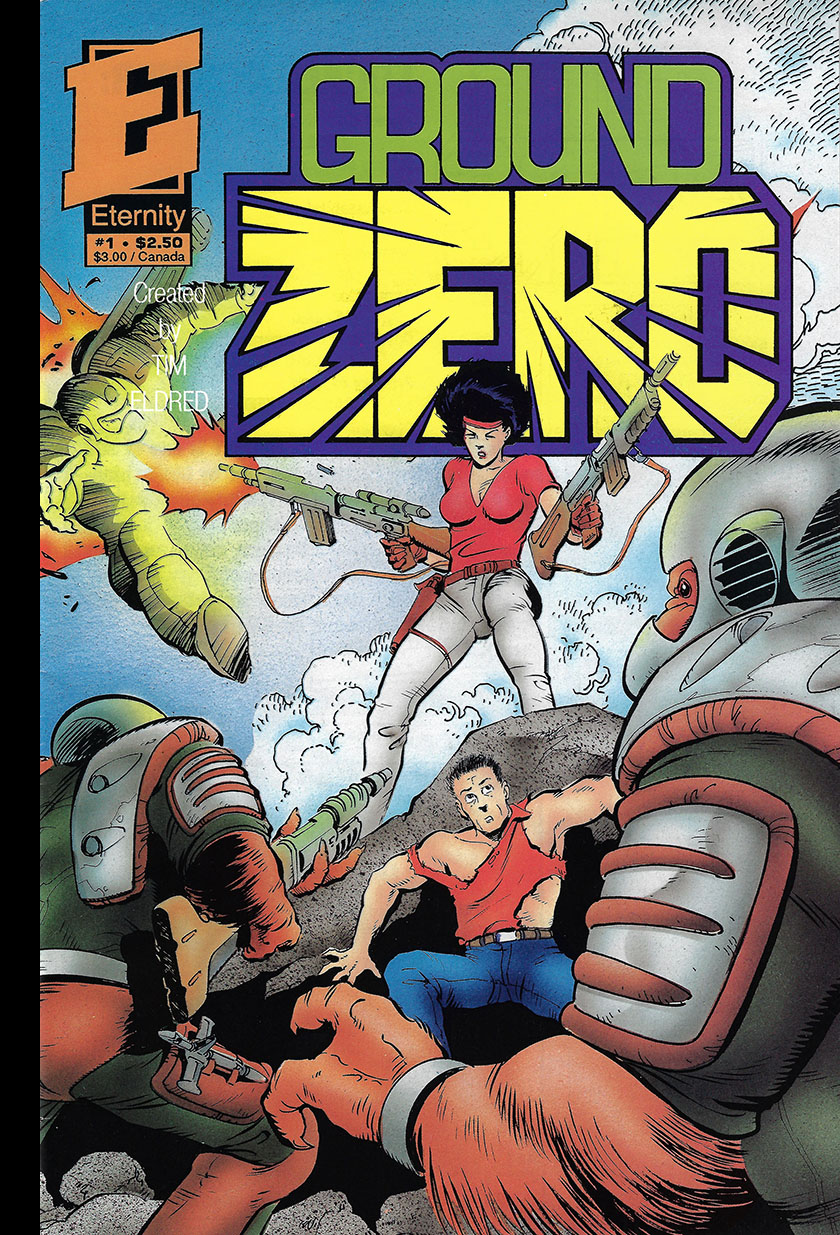 In the future, everyday life on an Earth colony planet is quiet and routine…until the day an unexpected and devastating attack from space disrupts it forever. Suddenly, people who lived normal, predictable lives are caught between two brutal forces intent on mutual destruction. One of those forces is from Earth. But which of them is the enemy?

Ground Zero was my third attempt at getting an original comic series out into the world, following the experiences of BROID and Chaser Platoon. There were a number of firsts attached to it, most importantly the speed at which it came together. With my previous comics, all the groundwork had been done long in advance of finding a publisher. This time I started from nothing and got the whole project underway in just a couple months.

All four issues were written and drawn in late ’90 and early ’91, but did NOT all get published. I’ll get to the reason why later. The point at the beginning was just to find out if I could come up with a story quickly enough to turn it into a paying job. One solution was to partner up with Robert Gibson, the writer of the Captain Harlock series. He and I had been friends for years and had good rapport. Plus, we both needed work, so it was a timely partnership.

I had a rough SF story idea titled The Last Blue Eagle. I turned it over to Robert and was amazed to see him quickly write up a 4-issue draft. I added some character drawings and sent it to our editor at Malibu. He passed, saying it would be “too hard to sell.” (Translation: he didn’t feel like being innovative.) So into the “dead vault” it went. This turned out to be a blessing; I pulled it back out in 2020 and started developing it further. It’s now 100 times better. You’ll see when it gets here. 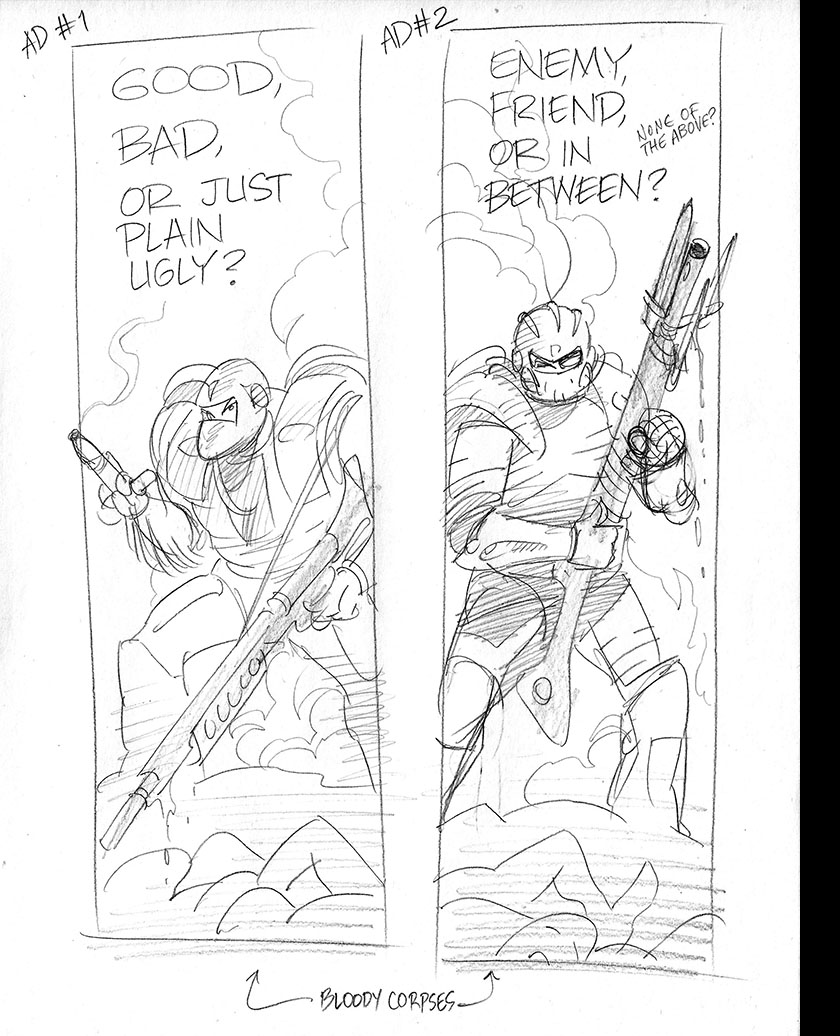 Robert had other ideas, and we pitched one of them to some indie publishers, but it also fizzled. I didn’t know where else to turn, but then my subconscious came to the rescue. One night I had a dream about cyborg soldiers that put a new idea in my head. When I woke up, that idea was still there. I wrote down what I remembered about it, and BAM. A story was born. The working title was Independence Colony. I wrote a summary, pitched it to the Malibu editor in October 1990 as my take on a Schwarzenegger action movie, and he liked it. Just like that, I was back in the game.

As it moved forward, I changed the title to Ground Zero. I also had to change my production pattern. I was penciling, lettering, AND inking Captain Harlock now, so I couldn’t finish an issue in two weeks as I’d done before. I needed four. Therefore, any second project had to be done “after hours” at a rate of one page a night.

With BROID and Chaser Platoon, scripting and thumbnailing had been done much earlier. With Ground Zero, I had to start from scratch. I hand-wrote scripts for myself, plugging in sketches wherever a scene or camera angle popped into my head. This allowed me to whip out thumbnails much faster than before and then get right into full-size mode. Prior to this, scripting and thumbnailing were always done together in a single pass. This new approach showed me how much faster I could go if I focused on one at a time, and I’ve done it that way ever since. 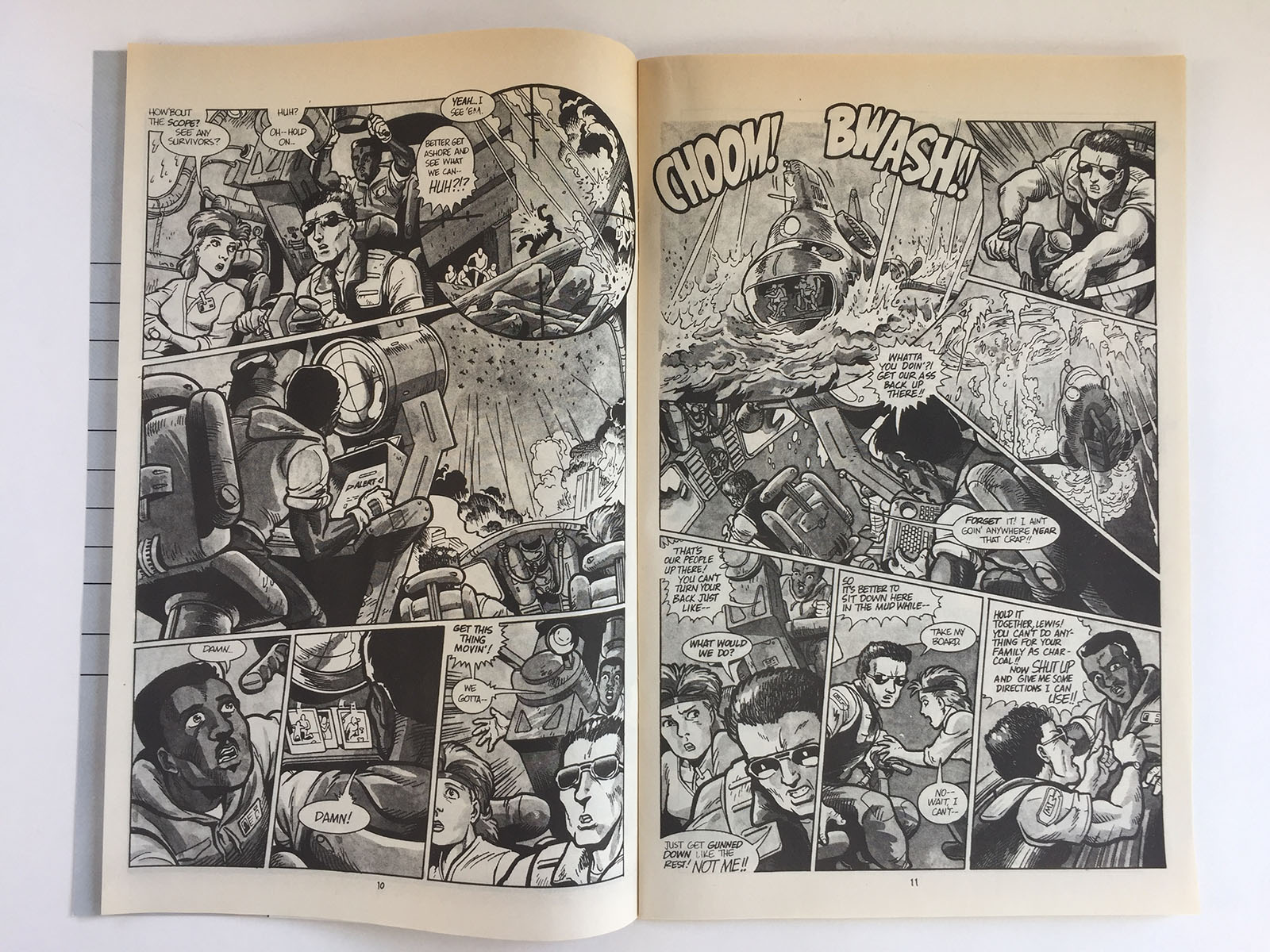 Another beneficiary was Steve Krueger, who had been my steadfast inker on both BROID and Chaser Platoon. He signed on again for Ground Zero, this time expanding his range with grey wash tones. He would ink all the line work and then paint in all the light and shadows. The end product was naunced and gorgeous, but all the subtlety was lost with the too-dark printing and sub-standard paper that was typical of Malibu (sample above). Fortunately, you won’t see any of those deficits below. Every page finally looks as good as Steve intended.

With all of that out of the way, here’s issue 1 of 4. The rest will follow! 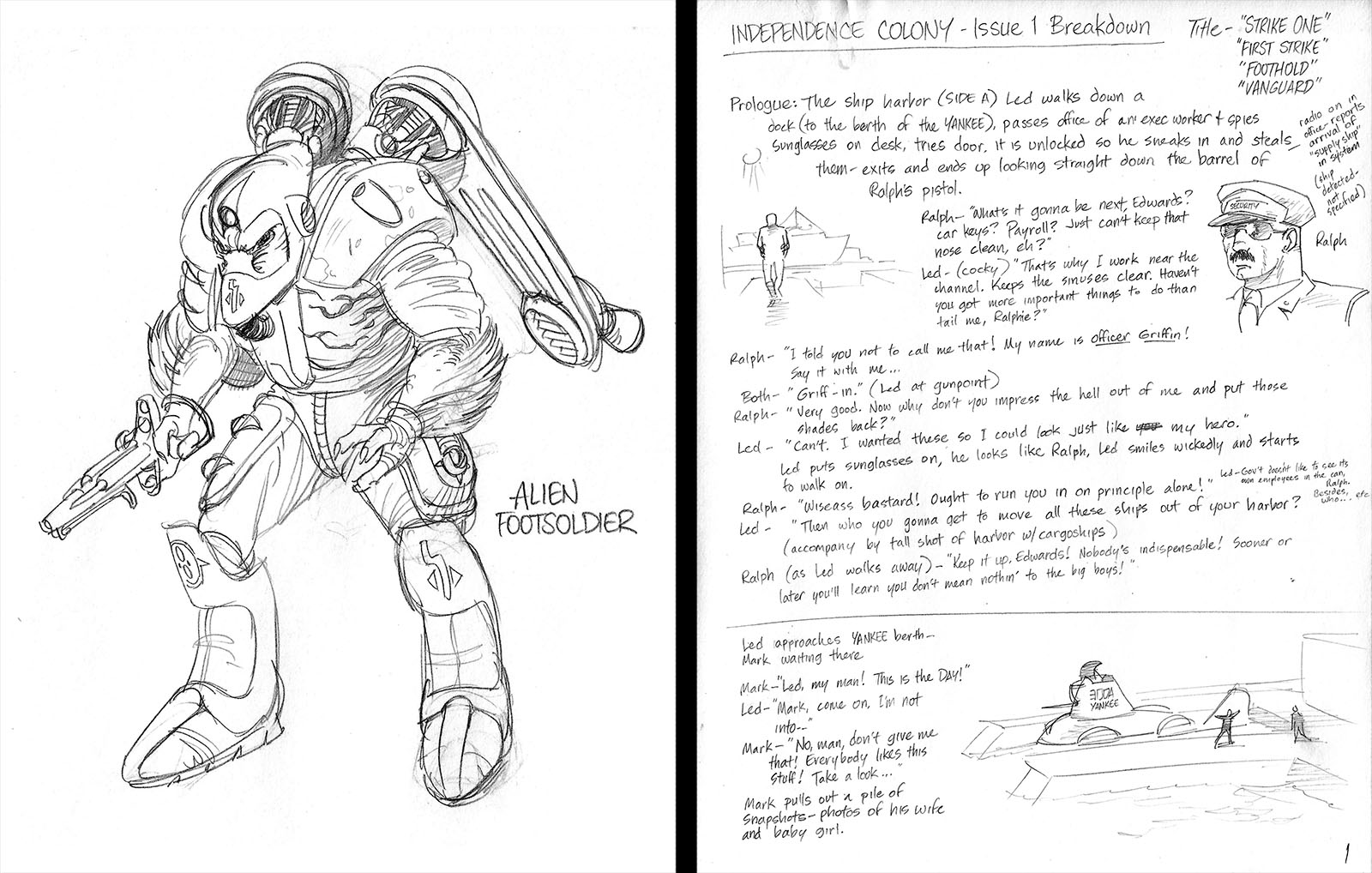 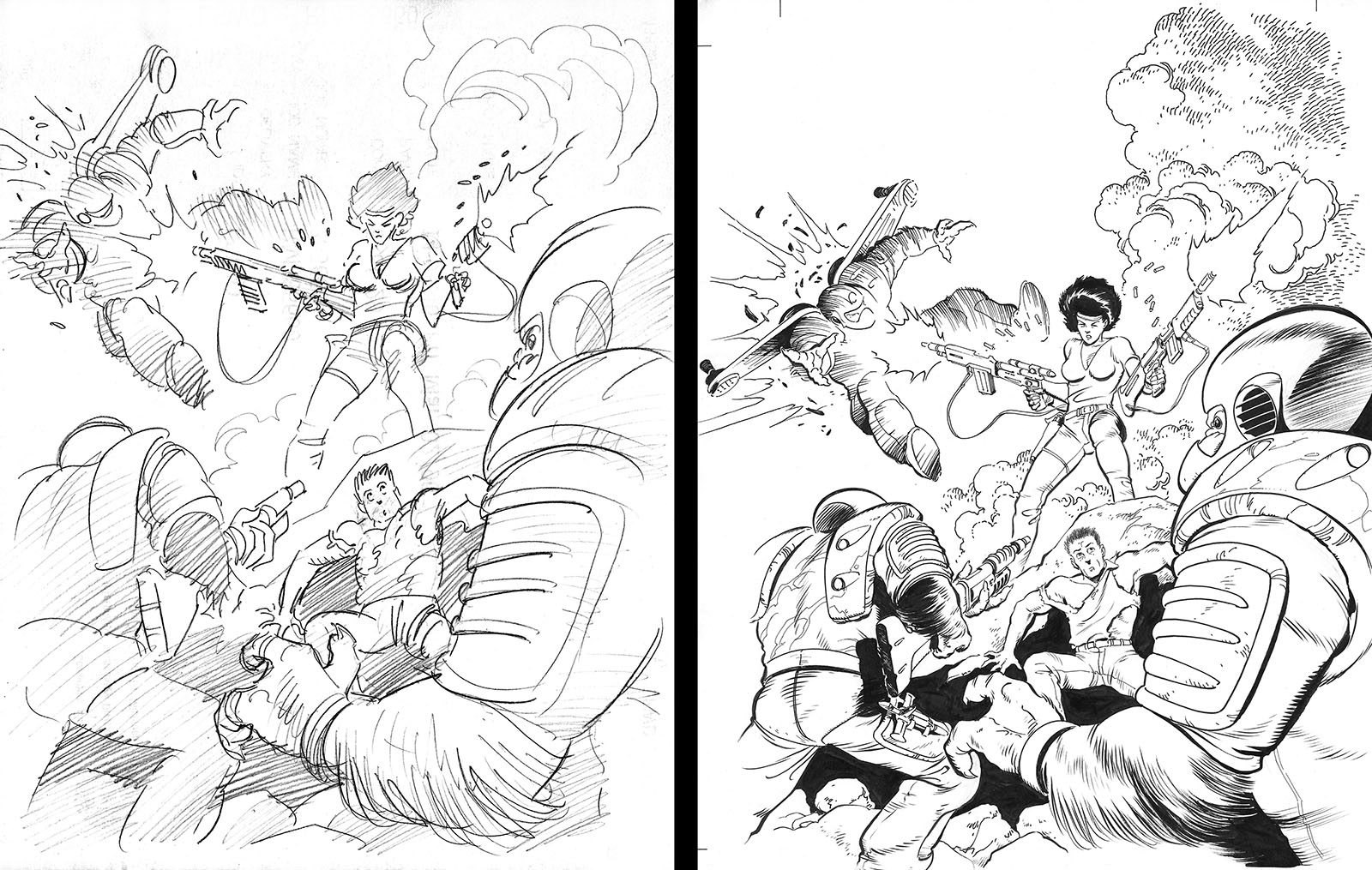