Fist of the North Star parodies

One of the best things about FotNS is that for all its epic grandeur and melodrama, it has an inescapable funny side that constantly keeps it grounded. The characters may take themselves seriously, but the show itself is another matter. Parodies have often served as a side-helping in one form or another, but they got started for real on the 25th anniversary in 2008, and since then they’ve literally taken over the show.

Here’s what we have to choose from so far…

DD Fist of the North Star

This is a parody featuring “Design Deformation” versions of the characters (that’s where the DD comes from; back in the 80s it was SD for “Super Deformed”). In this story, the nuclear war of 199X didn’t happen and the characters are forced to take menial jobs in a modern, non-apocalypse life. They are drawn in small cartoon bodies that represent their diminished state in a world that has no use for them. Nevertheless, everyone from the original manga is still around and their “battles” play out in their own way.

It was serialized in Monthly Comic Zenon from December 2010 through August 2016. An anime version started during this time that amplified the concept and made it even sillier. Text below is from the back covers of each collected volume. 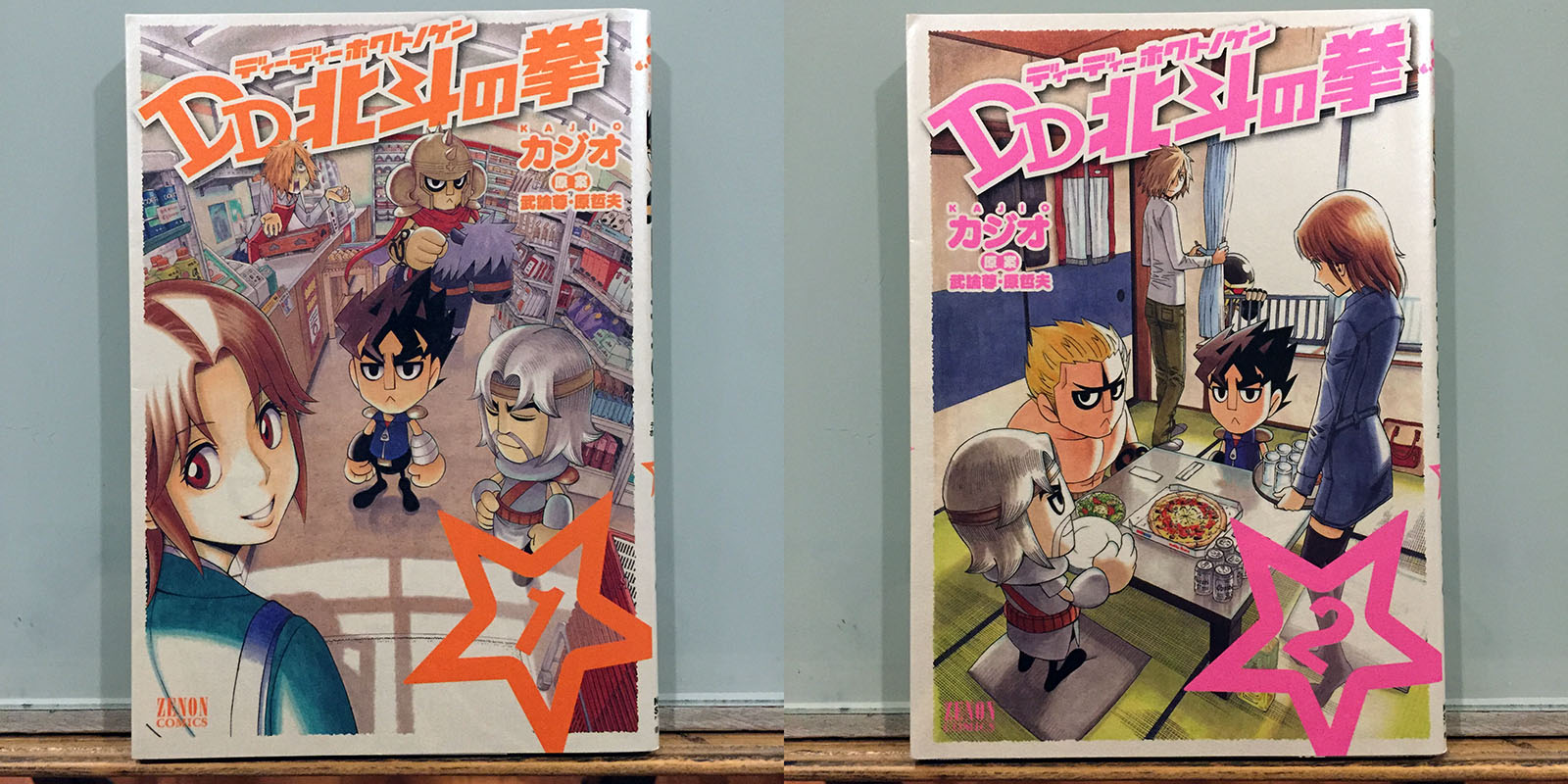 A Hokuto Shinken comedy about fighting in the difficult modern age

It’s the 21st century, and Japan is a peaceful country where violence doesn’t rule, and there’s no shortage of water or food. Of course, there is no way to make use of Hokuto Shinken, the most powerful assassination fist in the world. In addition, there is no one bad enough to poke in their secret pressure point. Kenshiro, who is completely powerless, works as a quiet and unfriendly convenience store clerk. This is the start of a Hokuto Shinken comedy about a group of airheaded fistfighters.

Hokuto Shinken vs Nanto Seiken: which one of you can’t read the room?

A peaceful Japan in the 21st century. Kenshiro and his friends have no chances to use the assassin’s fist, Hokuto Shinken. They are working part-time to make ends meet. The three Hokuto brothers alone are a hassle, but the strong Nanto Seiken enemies keep appearing one after another. An unpredictable battle between Hokuto and the Nanto is about to begin! 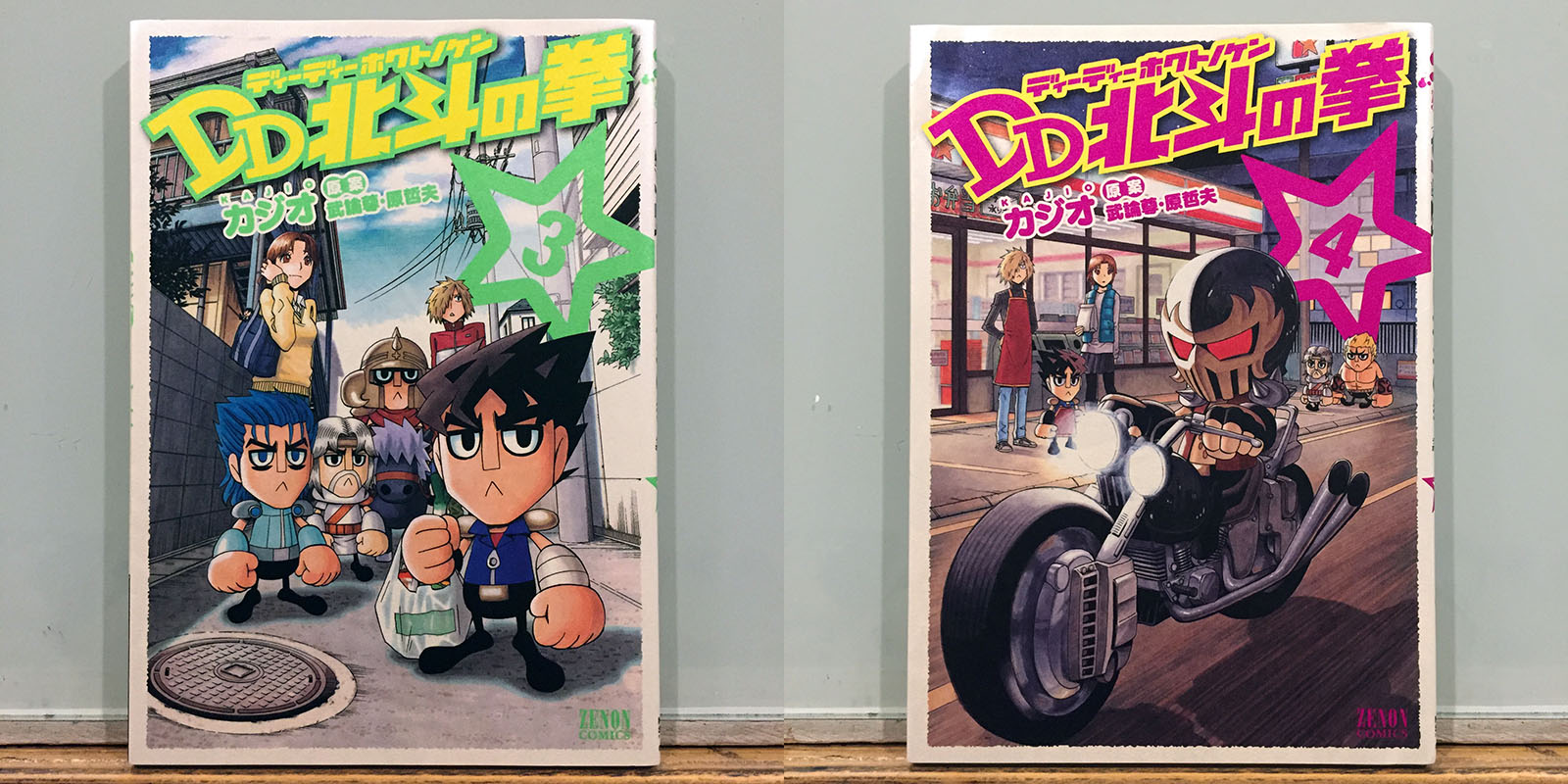 Watch the way of life of the Hokuto men, who live in the modern age with their small bodies!

It is the 21st century, and in a peaceful Japan where there is no conflict, fighters who have mastered the assassin’s fist seem to have become extinct. But the Hokuto and the Nanto have not died out! Shu, the president of a moving company, is carrying a load on his back. Juuza, now a high school teacher, teaches whatever he pleases. This is the story of the fist fighters who survive in modern society, which is in some ways more painful than the end of the century, in a cute deformed form!

The Hokuto men who are not in tune with the modern world. In a way, this is their greatest challenge.

Japan is a peaceful country in the 21st century, a place that is supposed to be kind to everyone and easy to live in. However, it has little to do with the end-of-century fist fighters. Or rather, it completely ignores them and goes its own way. Ryuuken, the master father of the three Hokuto brothers, have them fighting in a sushi restaurant. Yuria’s brother Ryuga is in the mood for a drink at the convenience store where he can taunt Kenshiro. A new character is introduced, and a heated (??) battle between these airheaded men continues to unfold! 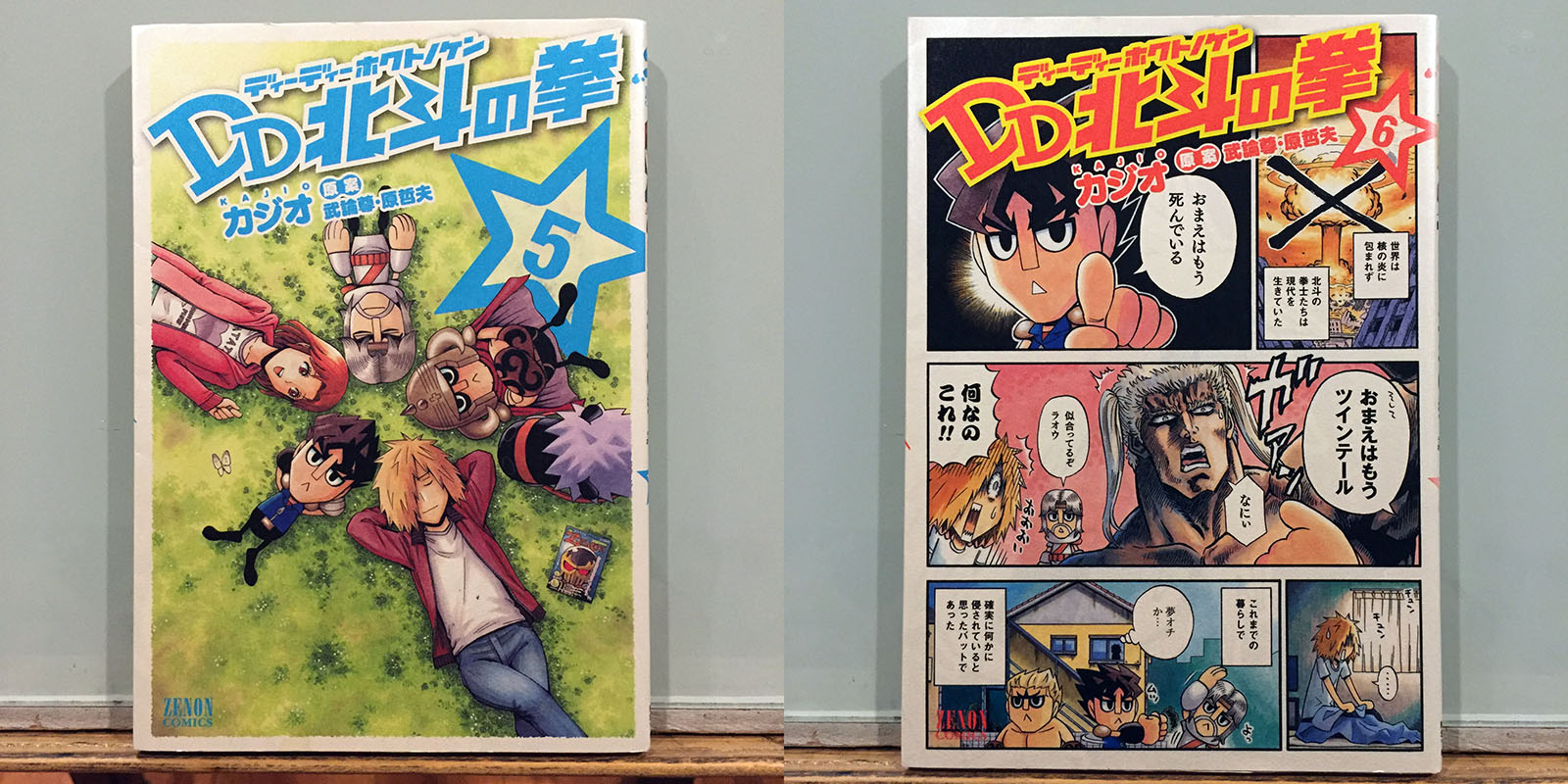 The men of the North Star go their own way without fighting for the world or anything else!!

In the peaceful and prosperous Japan of the 21st century, do you know of any clan that is completely out of place? The fist fighters of the end of the century, who are unqualified for the usual jobs of today, instead live at their own pace. Camping, dieting, Valentine’s Day, etc., even the most mundane of events quickly turns unpredictable in the hands of Kenshiro and the others. The world continues to turn regardless of what they do.

It is the 21st century, and although there are difficulties, everyone is living peacefully in modern Japan. The men of the North Star don’t have much money, but they live their daily lives vigorously. Even a device of civilization such as a cell phone becomes an interesting item in their hands! Kenshiro and his friends, tireless and curious about everything – go their own way. 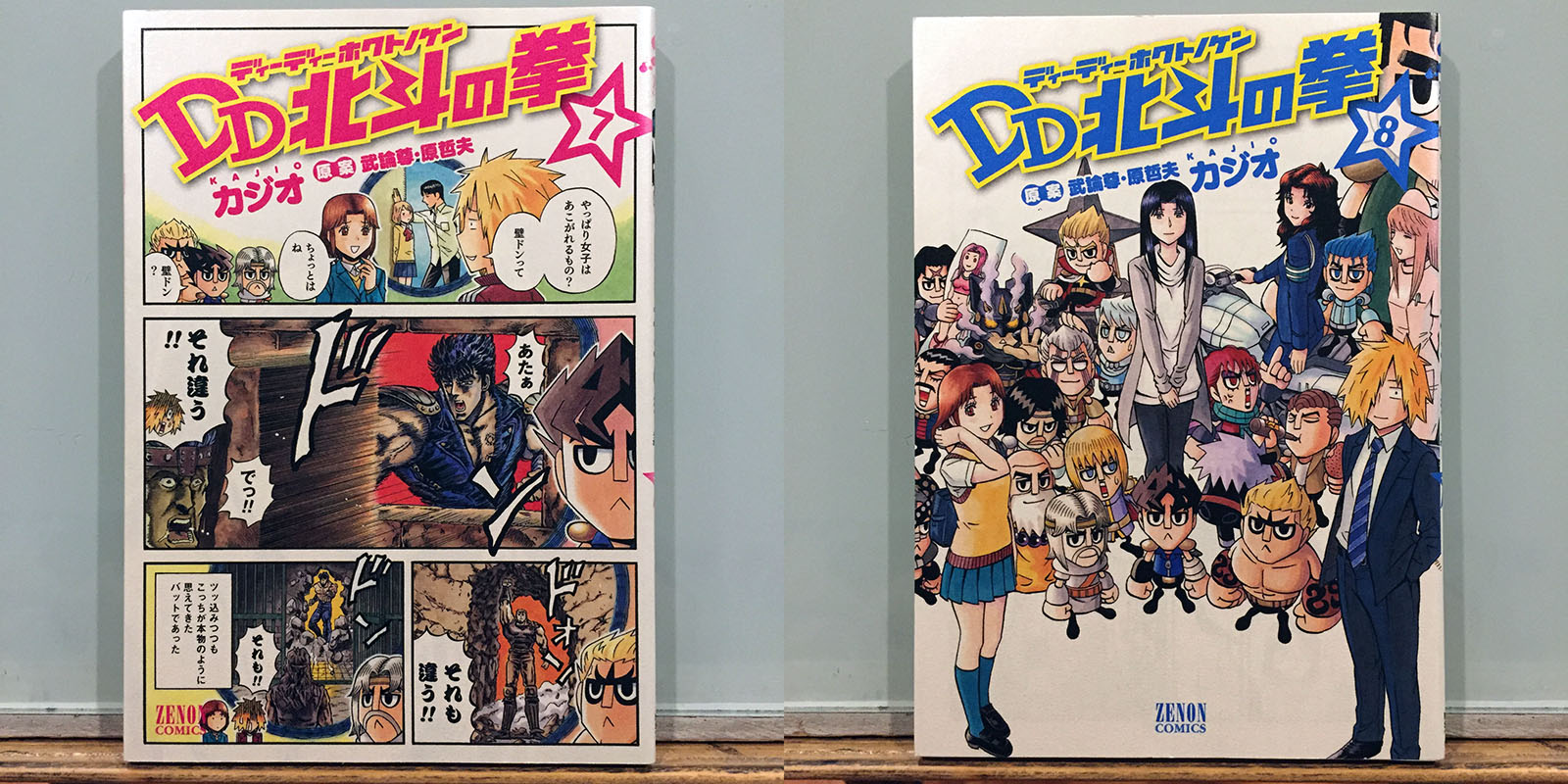 The North Star is a companion for everyday life.

The world is not engulfed in nuclear flames, and modern Japan has peacefully entered the 21st century. Kenshiro and his friends are enjoying their daily lives at their own pace, and this time new friends have joined them: Ain, a little girl’s favorite stage papa, and Falco, the former manager of an electronics store! All of them are active and full of personality.

DD Fist of the North Star is immortal!

In the 21st century, Kenshiro and his friends are enjoying their daily lives in a peaceful Japan in a pure and sincere manner. They meet their destiny on a cheap hot spring tour, go to Lin’s high school festival, and so on. They continue to enjoy their daily lives. The final volume is filled with tears and smiles.

It graduated to TV in April 2013 with a run of 13 episodes, each containing two segments for a total of 26 stories. This was not an adaptation of the manga; the anime worked the premise in a completely different way. They were released on the four DVDs shown above from June to September, 2013. The whole series was released in the US by Sentai Filmworks in 2015 (below left). Order it from Amazon here or RightStuf here. 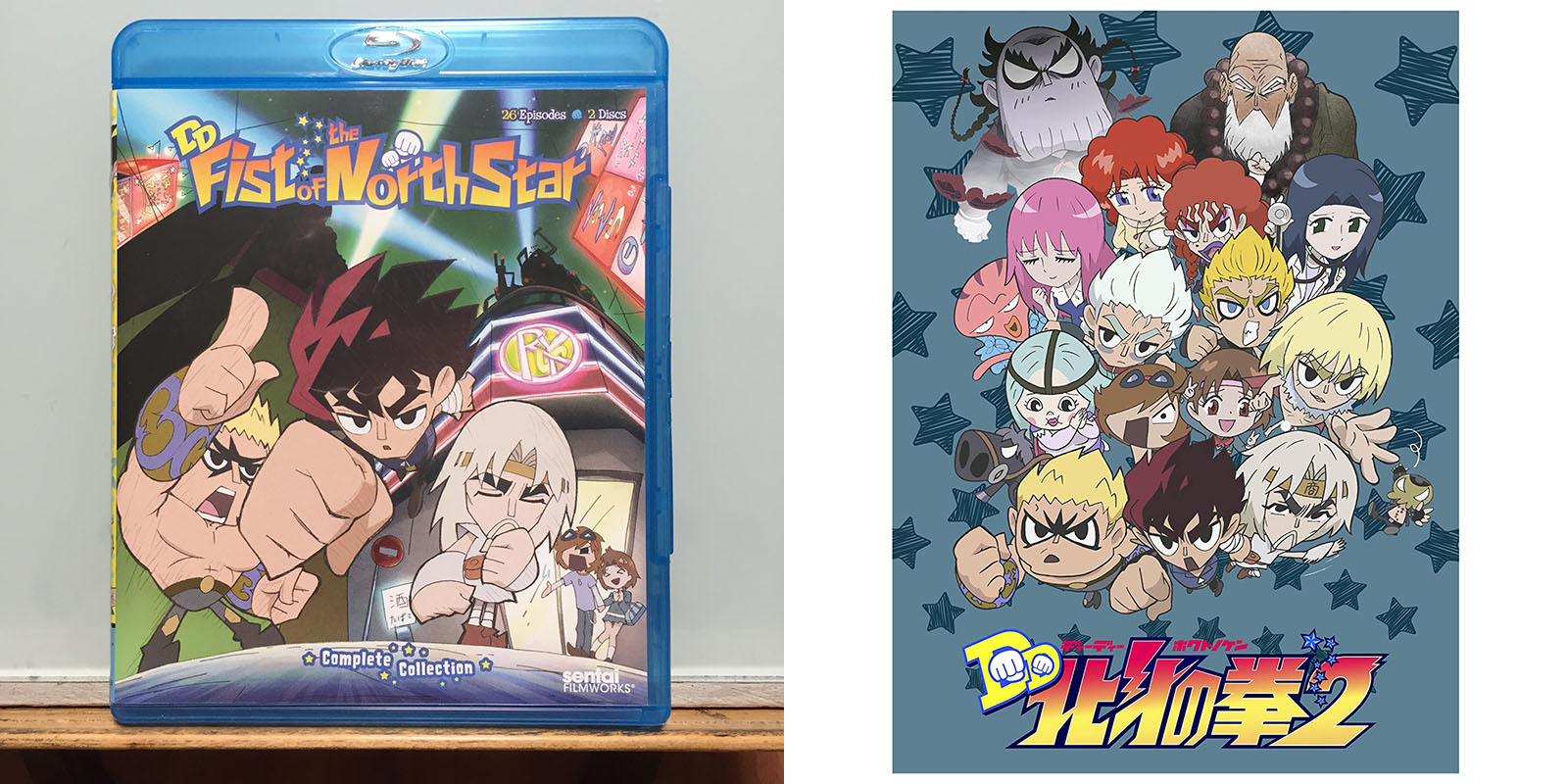 A sequel series called DD Fist of the North Star 2 followed with 12 more episodes in October 2015, and a box set of four discs (above right) was released in March 2016. So far, they have not been imported to the US, but you can see a subtitled montage on Youtube here.

Each of the 12 episodes ended with a short segment adapted from another parody that’s coming right up next.

This title ran online in Monthly Comic Zenon from March 2013 to September 2018. Whereas the DD series changes the premise, the Strawberry Flavor series is a straight-up parody of the original. It consists of short segments (like a sketch comedy show) with Sauzer as the flamboyant main character. Manga art and famous scenes are imitated and wrung out over and over for every possible gag. Sauzer’s nemesis is not Kenshiro, but “Turban Kid,” who constantly shows up and stabs him in the leg.

Other characters and situations get the spotlight as well, but the most significant offshoot was “Nanto De 5 Men,” which puts Sauzer and the other Nanto masters in a boy band and runs them through all their paces. Actual songs were written and performed as singles (and played a role in the anime version).

Obviously, you need to be a very dedicated fan to get all the jokes, and most of them are dialogue-based, so the whole thing is pretty opaque for non-Japanese speakers. But you can get a taste of it at the Comic Zenon website here. 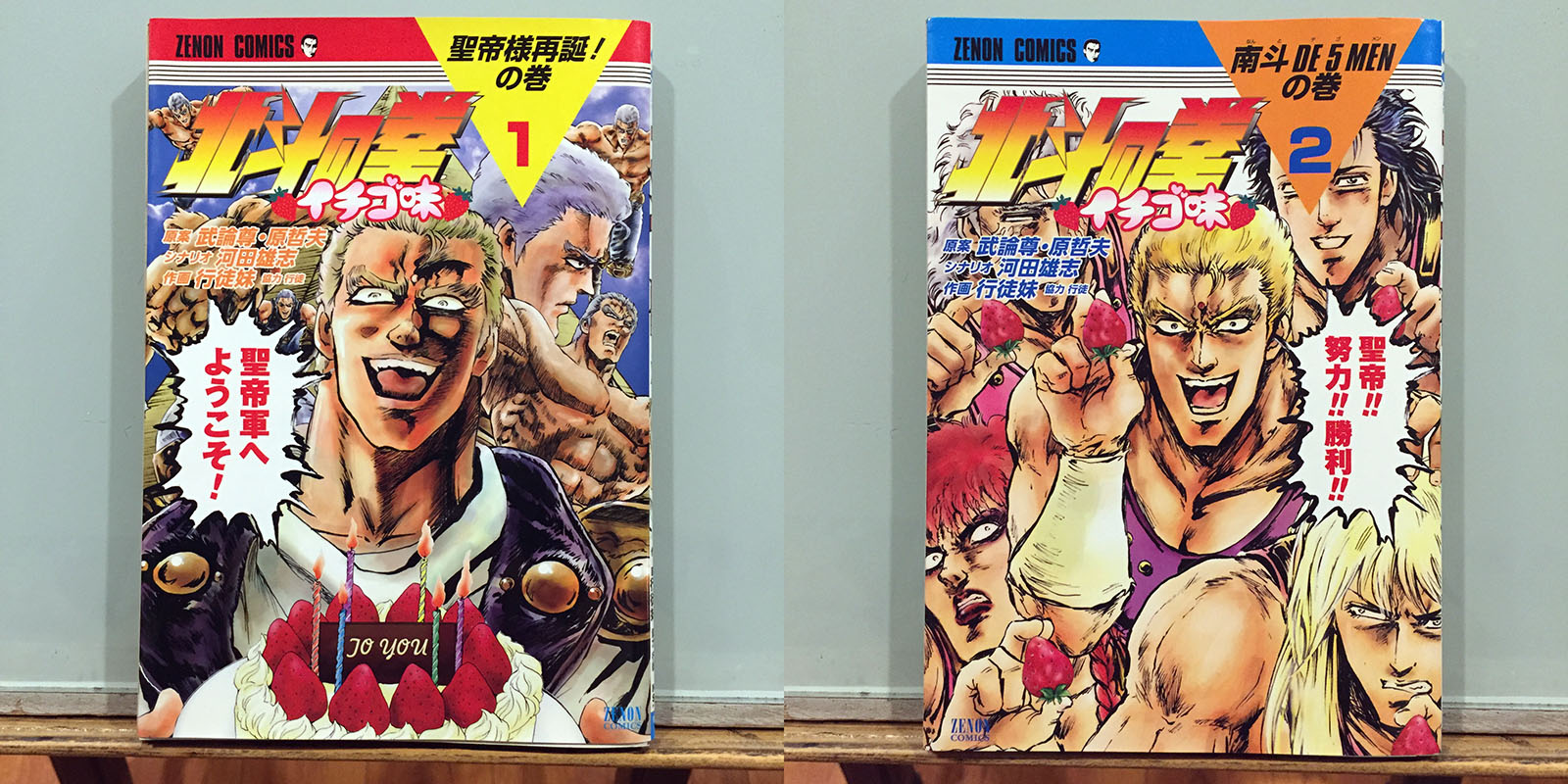 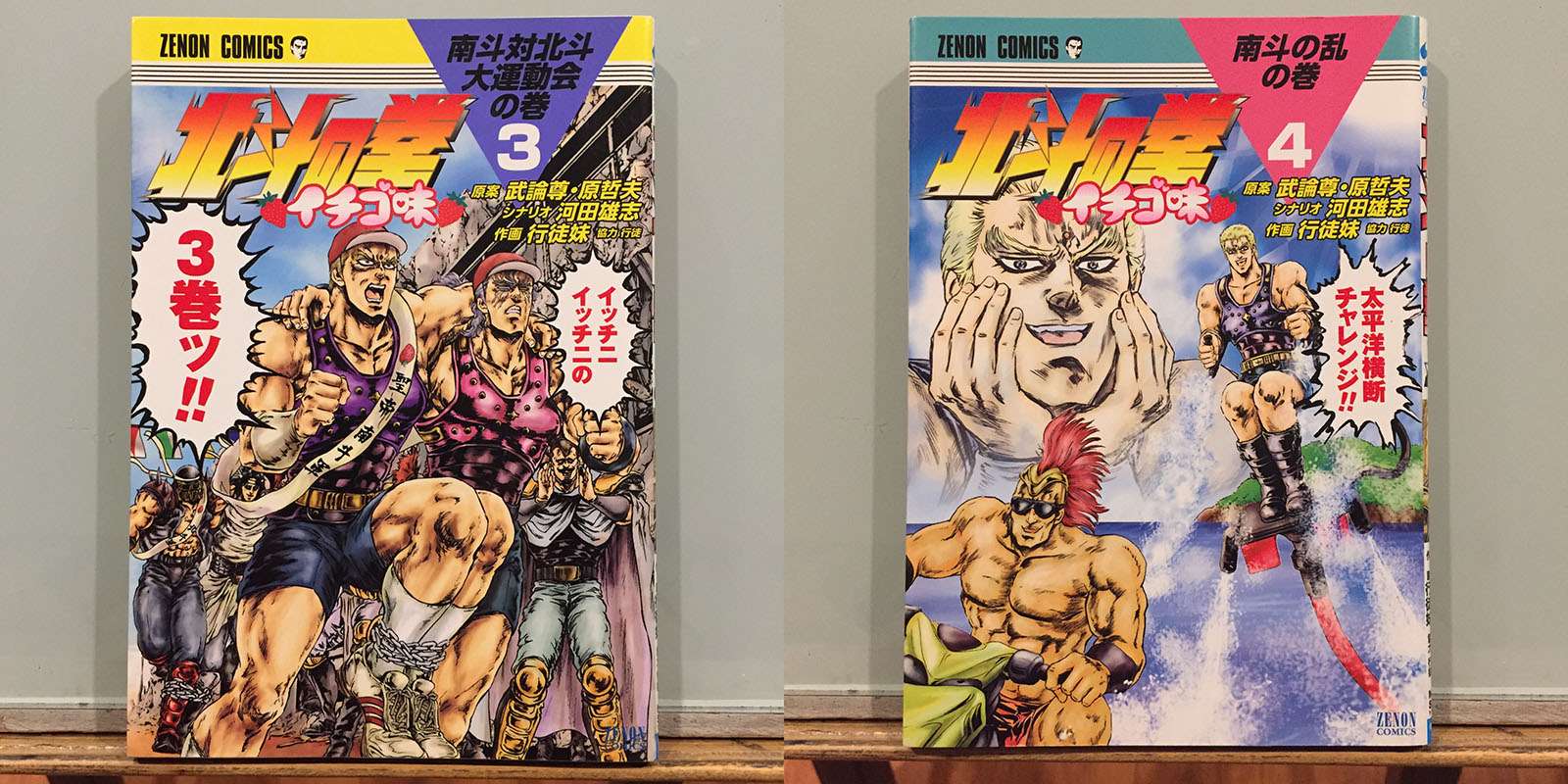 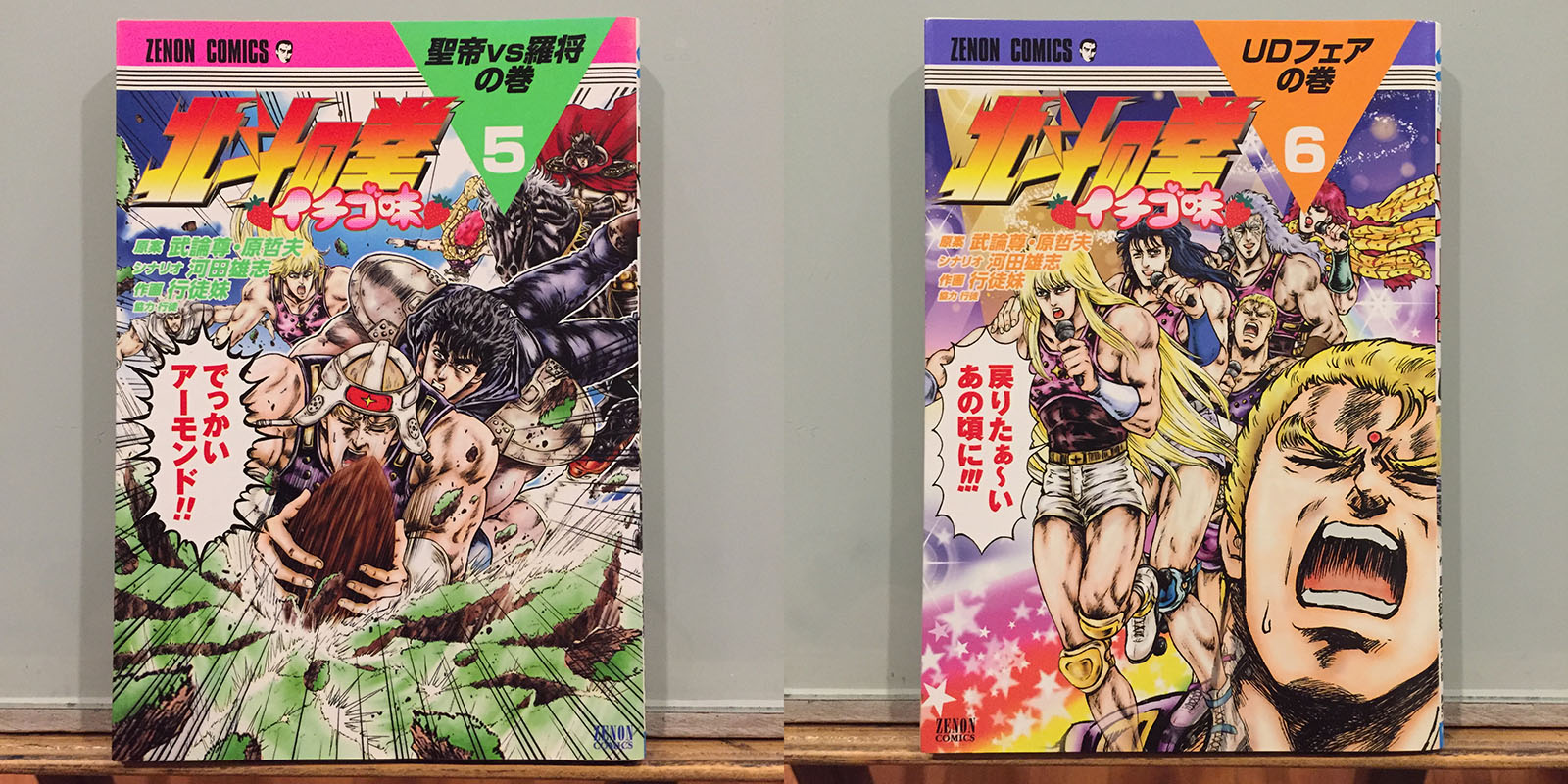 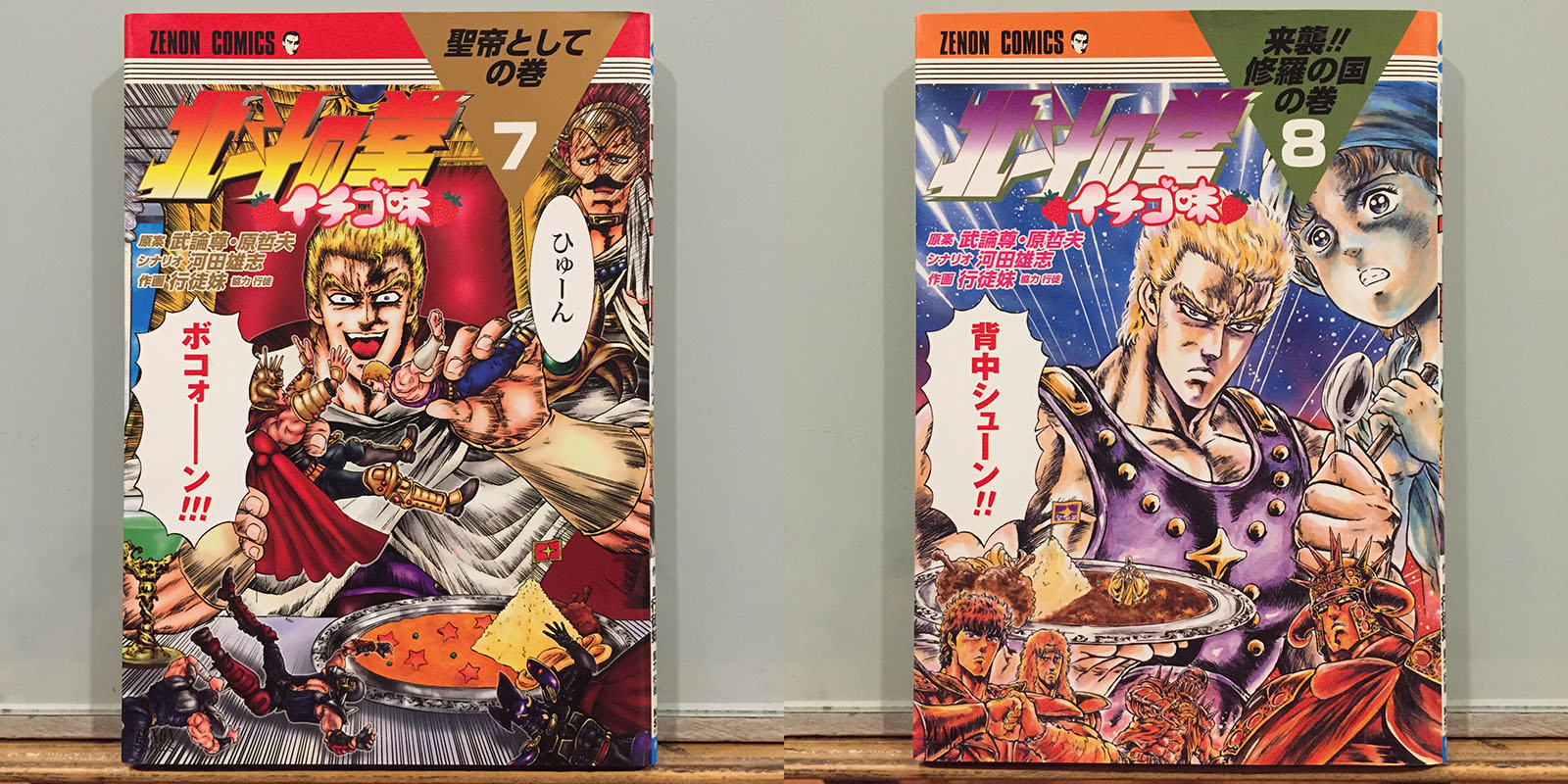 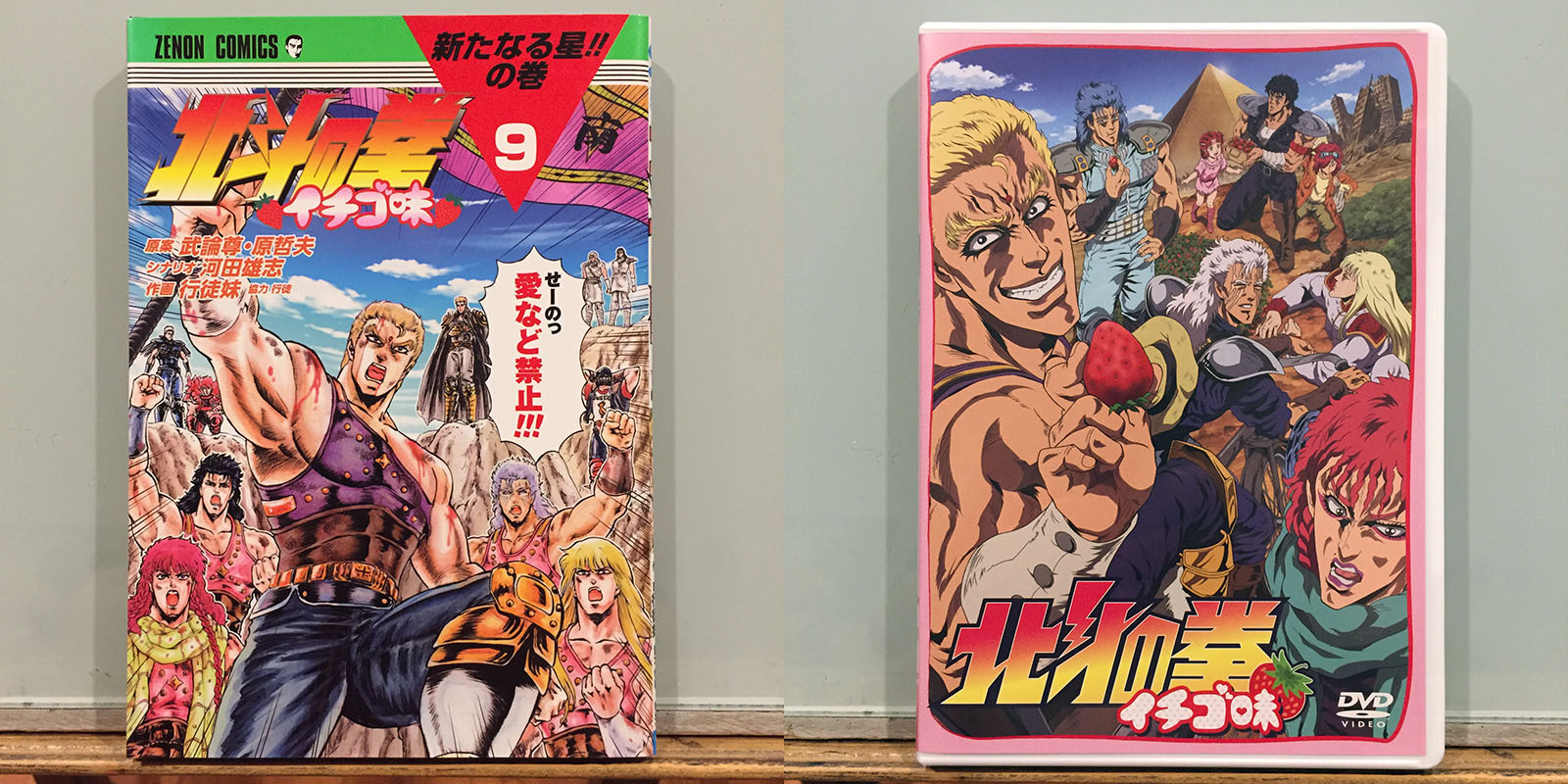 As stated earlier, the anime version of Strawberry Flavor ran as a bonus segment on every episode of DD FotNS 2 in 2015. The segments were short, adding up to a total of 33 minutes. They were released on a standalone DVD (above right) in March 2016. The animation is almost identical in style to the original TV series (with modern techniques), but the best part is that Sauzer’s original voice actor, Banjo Ginga, returned to the microphone for the role. Nobody does it better. 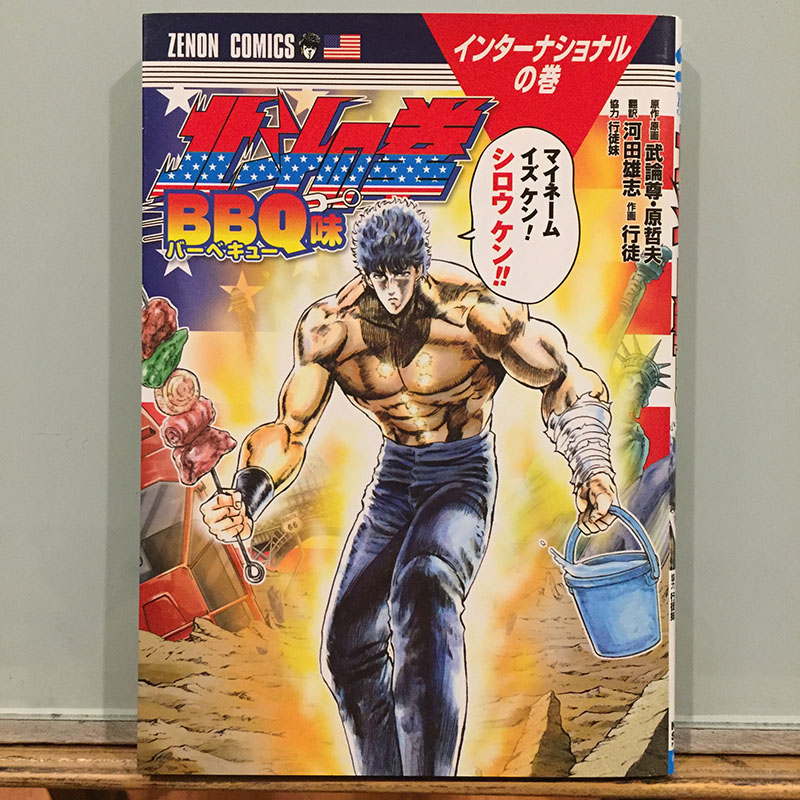 Created by the Strawberry Flavor team, this single volume has the very unusual gimmick of being written entirely in phonetic English. The approach is similar, placing the characters in famous scenes and playing them out. The difference is that if you can read katakana you can understand every word being said. It’s both intentionally and unintentionally funny. For example, the word balloon on the cover reads “My name is Ken! Shiro Ken!” And whenever a character gets punched, the expression is invariably, “OUCHIE!”

Fist of the North Star, Elegy of the Fist King Army Grunts

This one could almost be a legit FotNS gaiden, since it pretty much sticks to continuity, but it also dials up the humor to 11. The main character is a hapless nobody named Nobu who manages to survive the apocalypse and gets tricked into joining Raoh’s army, where the casualties outnumber the applicants. His coworkers are all weirdos, cutthroats, mutants, and bullies who will later be obliterated by Kenshiro. Until that day comes, Nobu is an eyewitness to their idiocracy.

It was serialized online from November 2017 to February 2020. The art is a comedic take on Tetsuo Hara’s style, and most chapters are self-contained at 7 or 8 pages. The language barrier is less of an obstacle if you know the original, and the gags are genuinely funny. 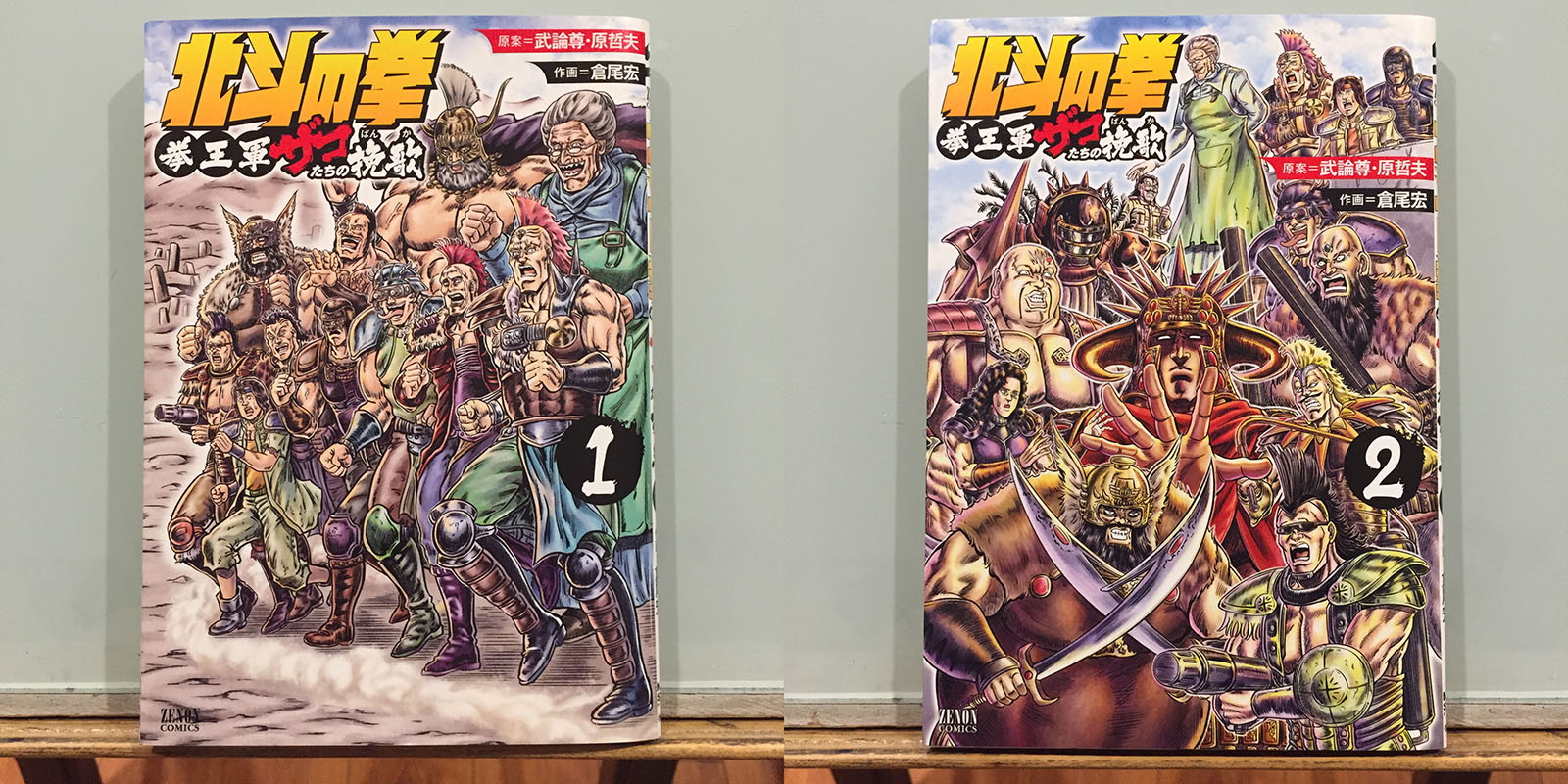 Daily hazards as a grunt in this army include “tough guy” lessons, occasional run-ins with main characters or rival armies, and blood splatter from random delayed head explosions. Menial tasks include serving as the guinea pig in booby trap testing and attempting to stuff King Wigul’s horn whips back into his helmet. Also, the presence of a cloning facility explains why so many of the grunts look identical.

Among other things, Nobu is a spectator for an “elite grunt tournament” in which all the bad guys with special gimmicks (who will all later be killed by Kenshiro) square off against each other as Raoh watches, deadpanned. It breaks up when Shin’s elite grunts invade the tournament and Raoh shows them all the door. Meanwhile, everyone’s hearing about a man with seven scars on his chest, but they have no idea what the scars look like. So they guess. 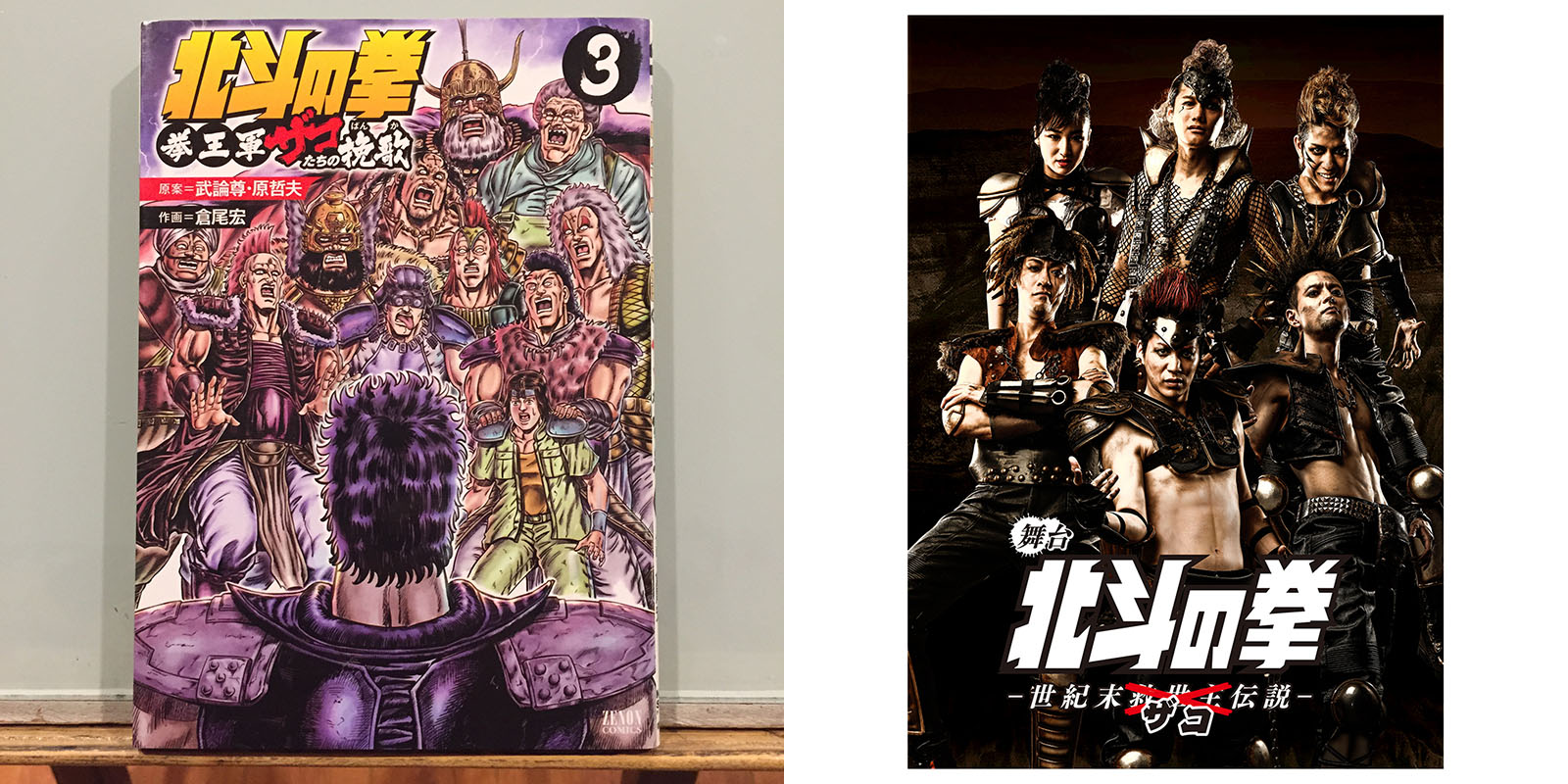 The third volume merges with the original manga as Nobu and his fellow grunts encounter one “headline villain” after another and become witnesses to some of the greatest battles – but always from a distance and from a bad angle. And they’re constantly being attacked by random villagers, which makes it hard to see what’s happening. When Raoh’s final moment comes, it happens miles away and the surviving grunts skip off into the wasteland to enjoy their newfound freedom.

Fist King Army Grunts was popular enough to spin off its own live stage show in 2017, titled The Legend of Zako [Grunts] at the End of the Century. It’s no longer being performed, but it was released on DVD and still has an online presence: 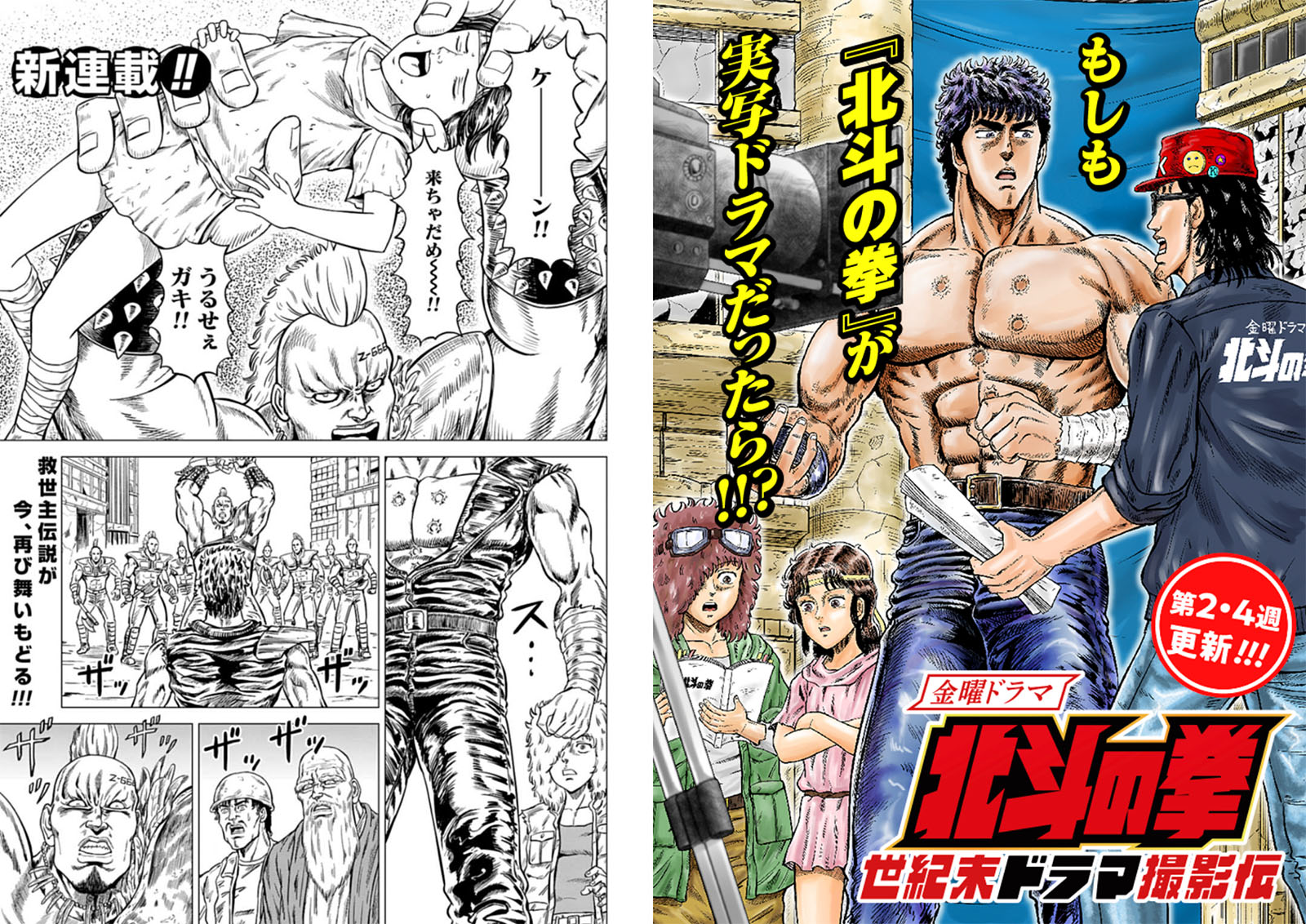 Story and art by Hiroshi Kurao

The time is the end of the century. The sea has dried up and the earth has been torn apart. A man in a leather jacket confronts the evil that hurts the weak. A loud shout overlaps with his brilliant defeat of the enemy. “CUT!” The withered sea and the torn earth are both large-scale drama sets. This is a record of the blood, tears, and sweat of those who film the drama Fist of the North Star day and night.

The series started February 2021 on the Comic Zenon website. See the chapters for free here.

Read an announcement about it at Anime News Network here. 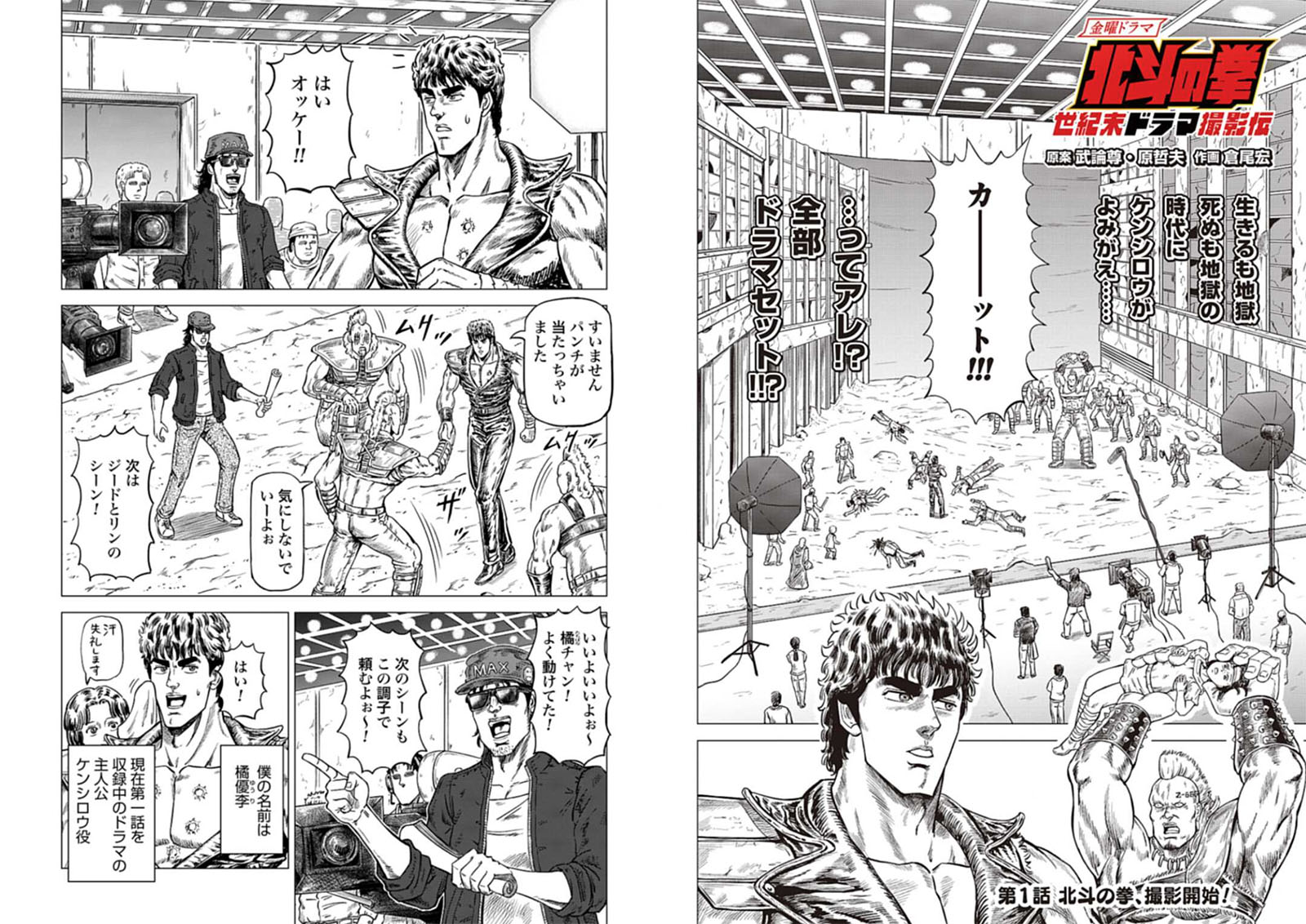 Back in 1989, I was a member of a FotNS fan group that passed letters around to talk about the series and share info, the paper version of an online message board. I took advantage of this outlet to whip up a parody of my own, which has never been shared with anyone else until now. Read on if you dare. 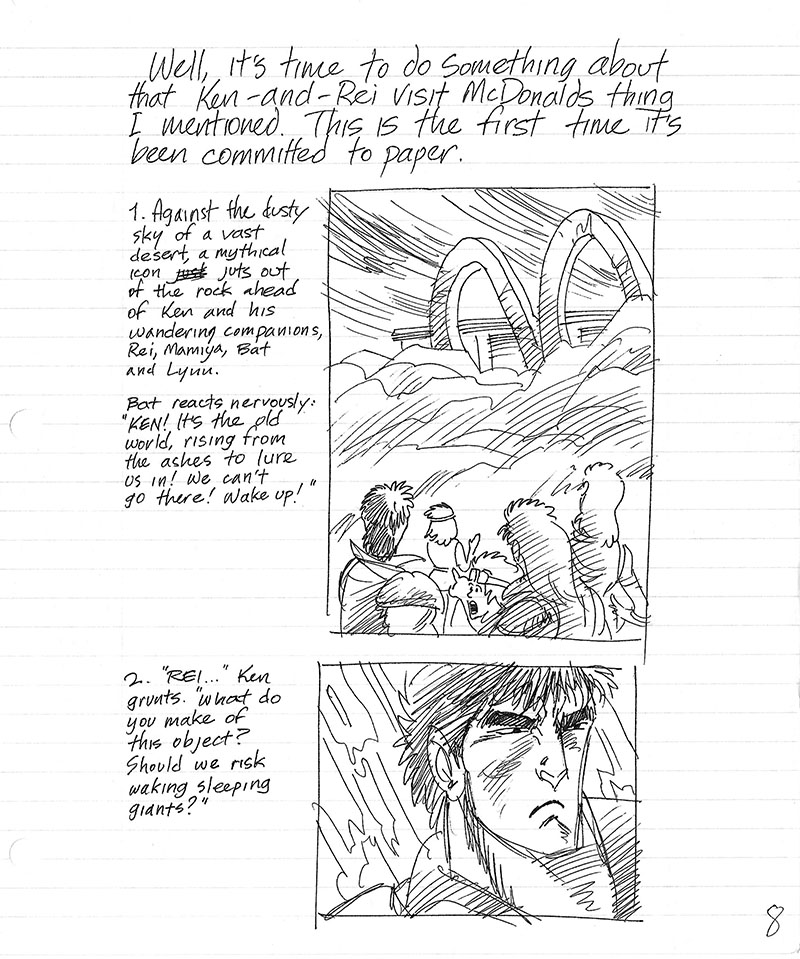 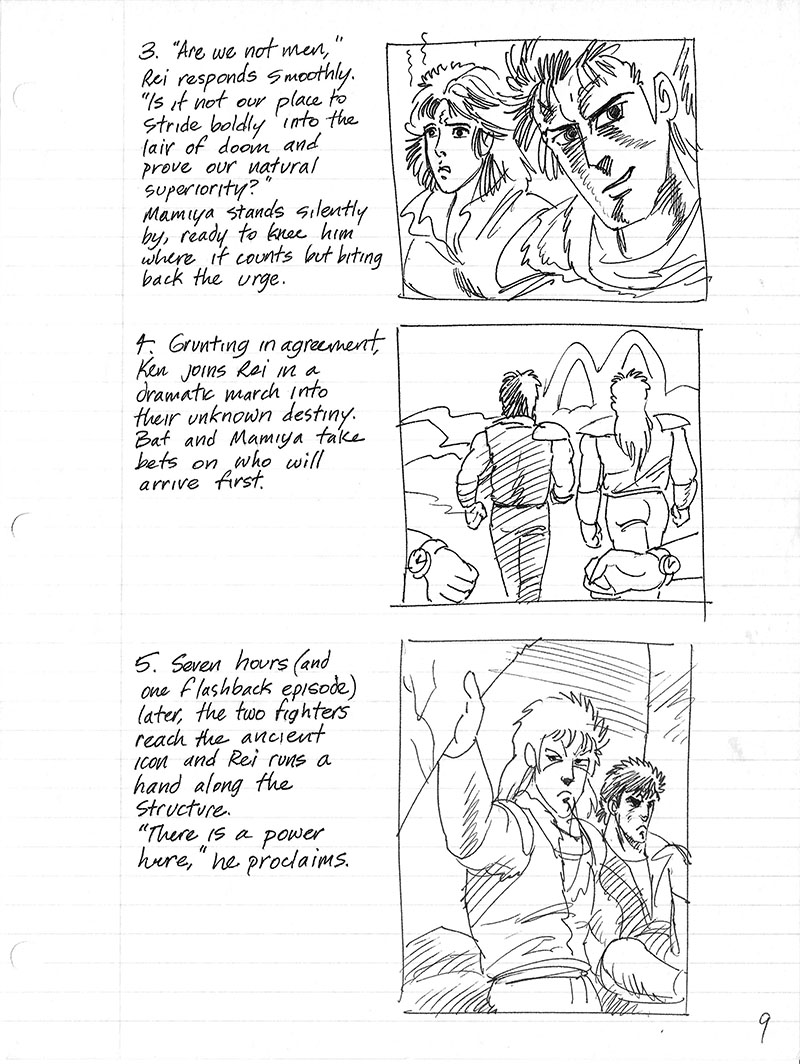 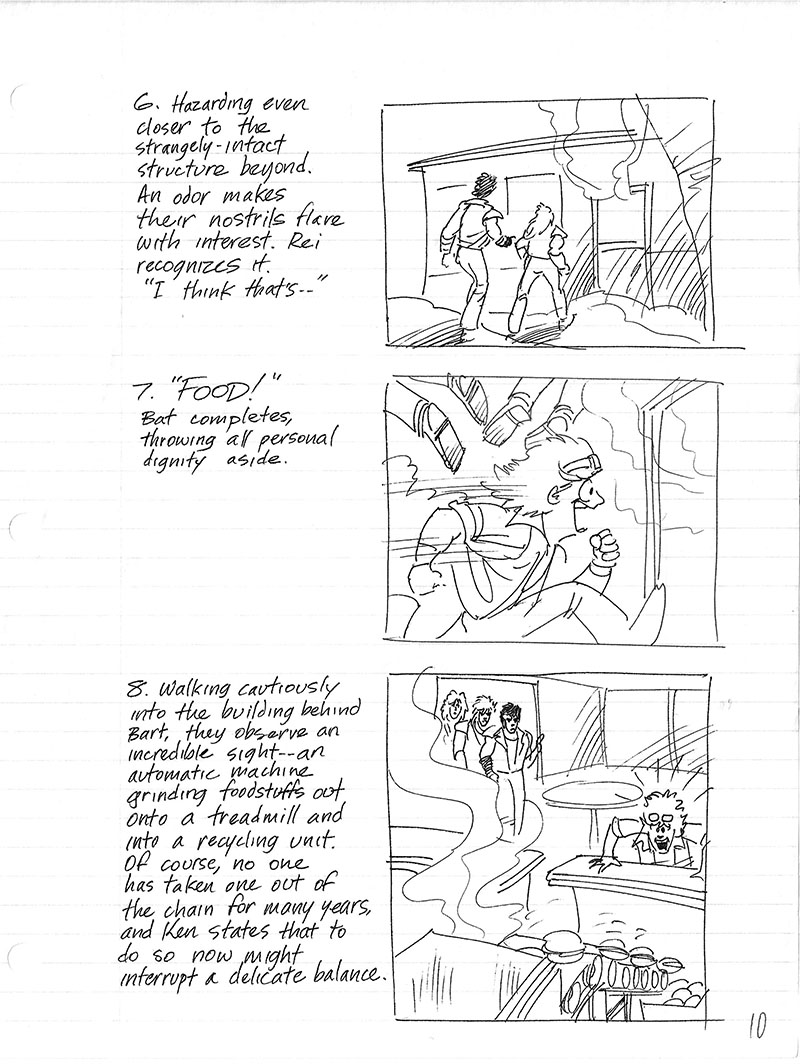 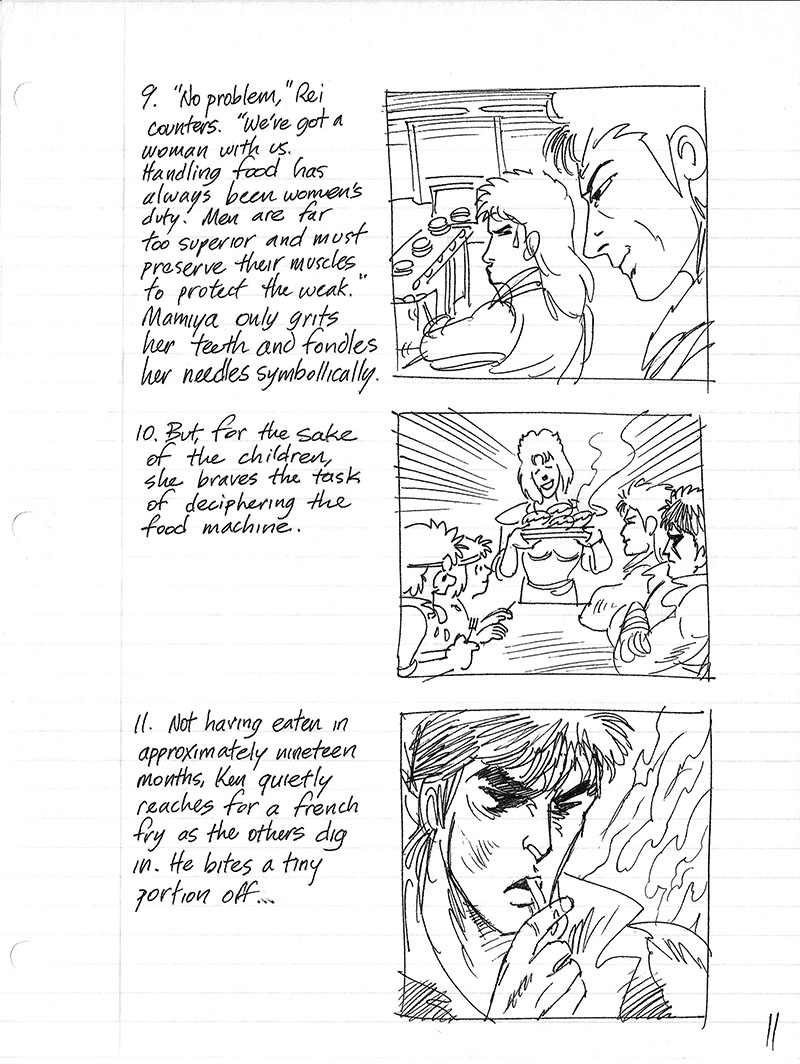 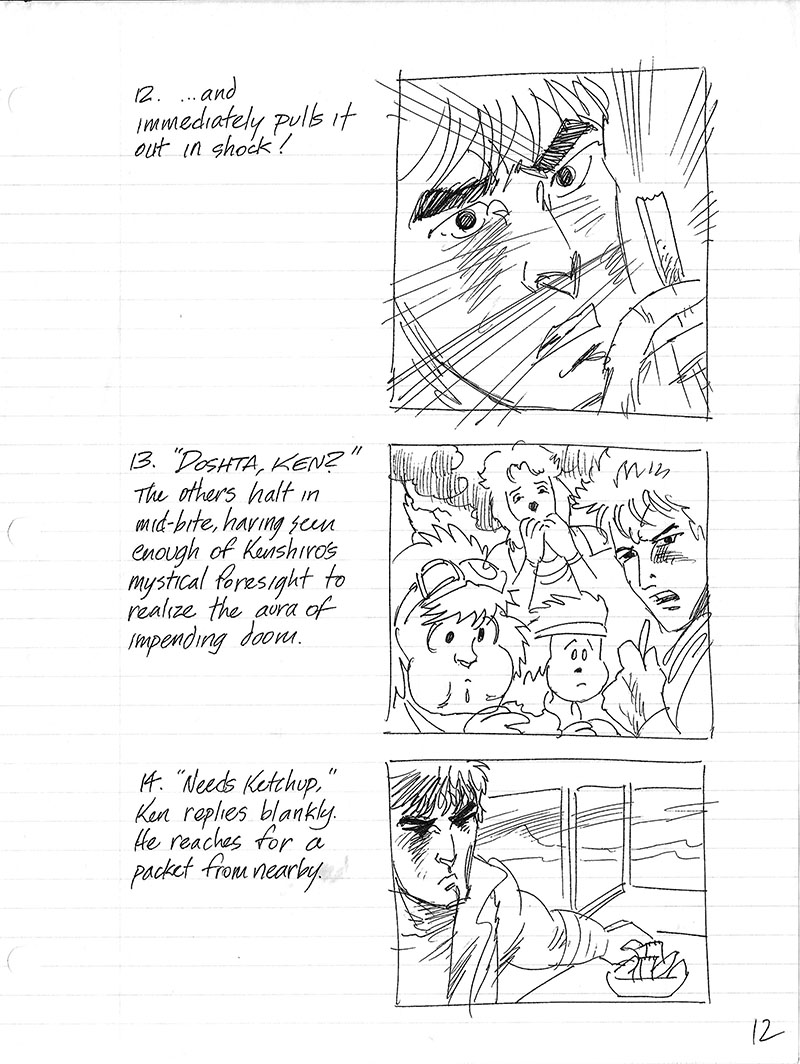 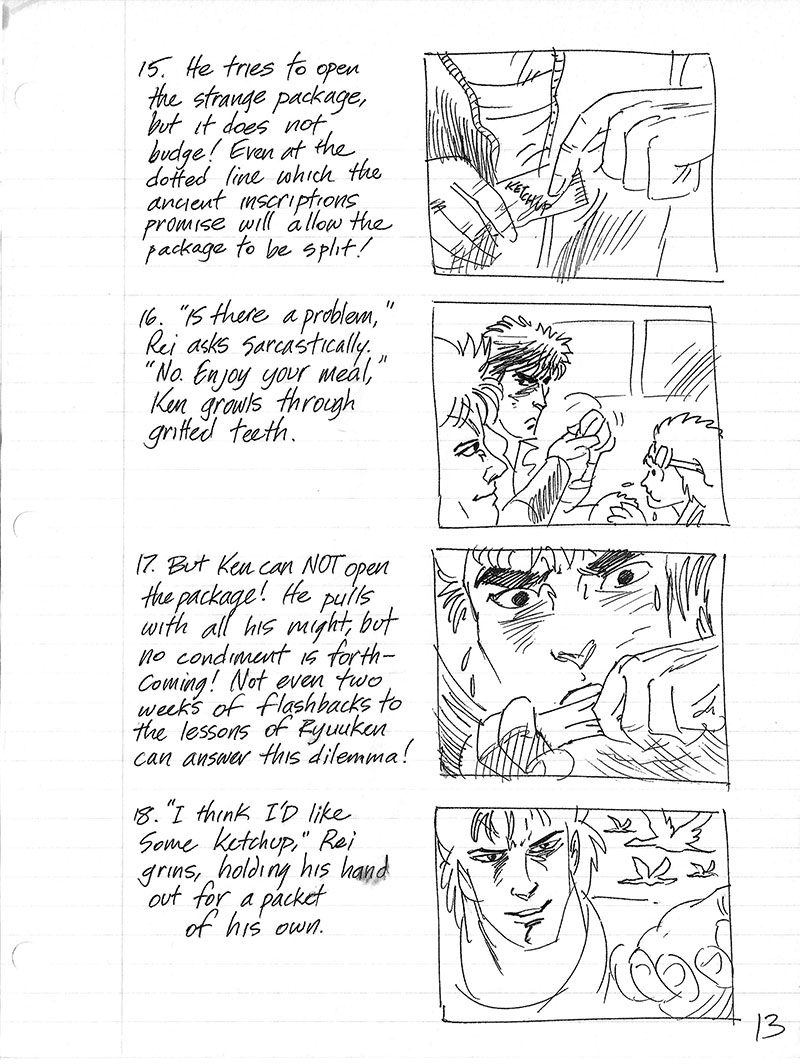 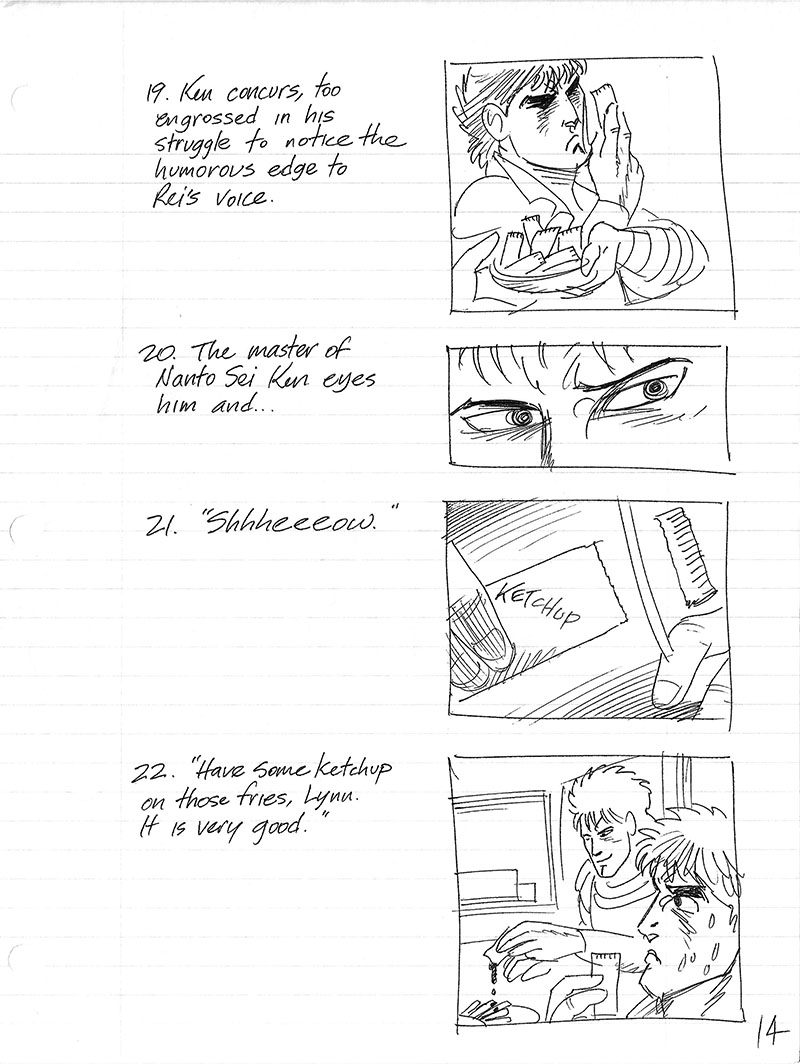 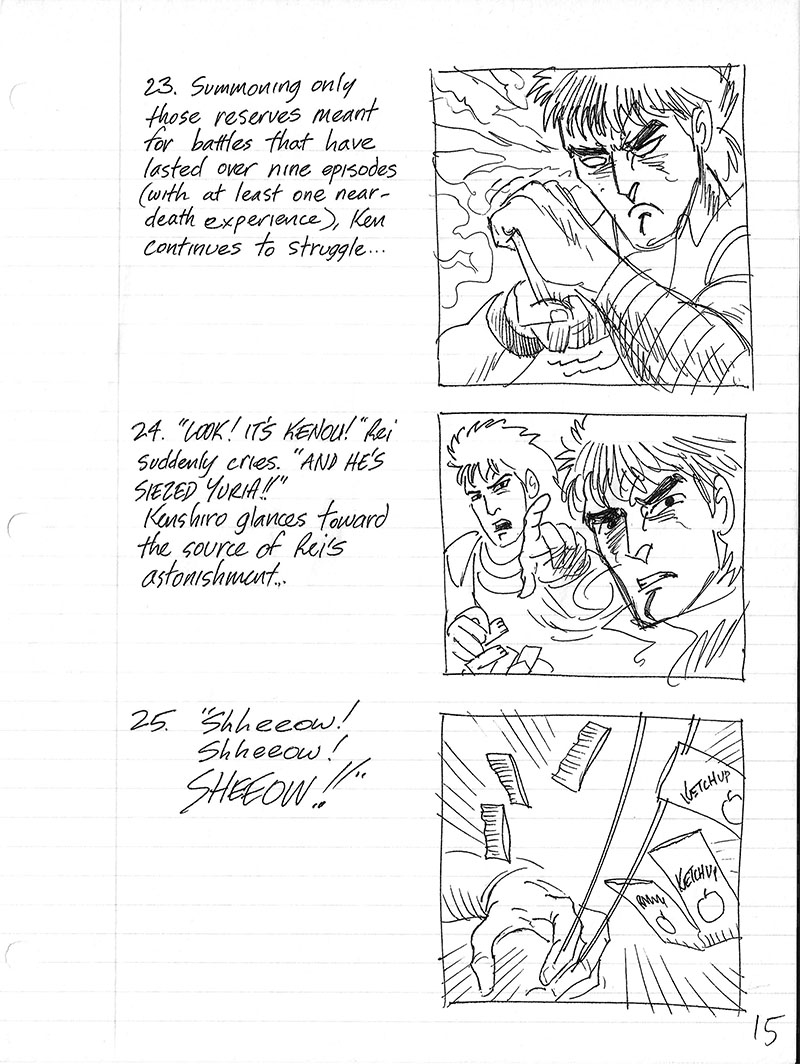 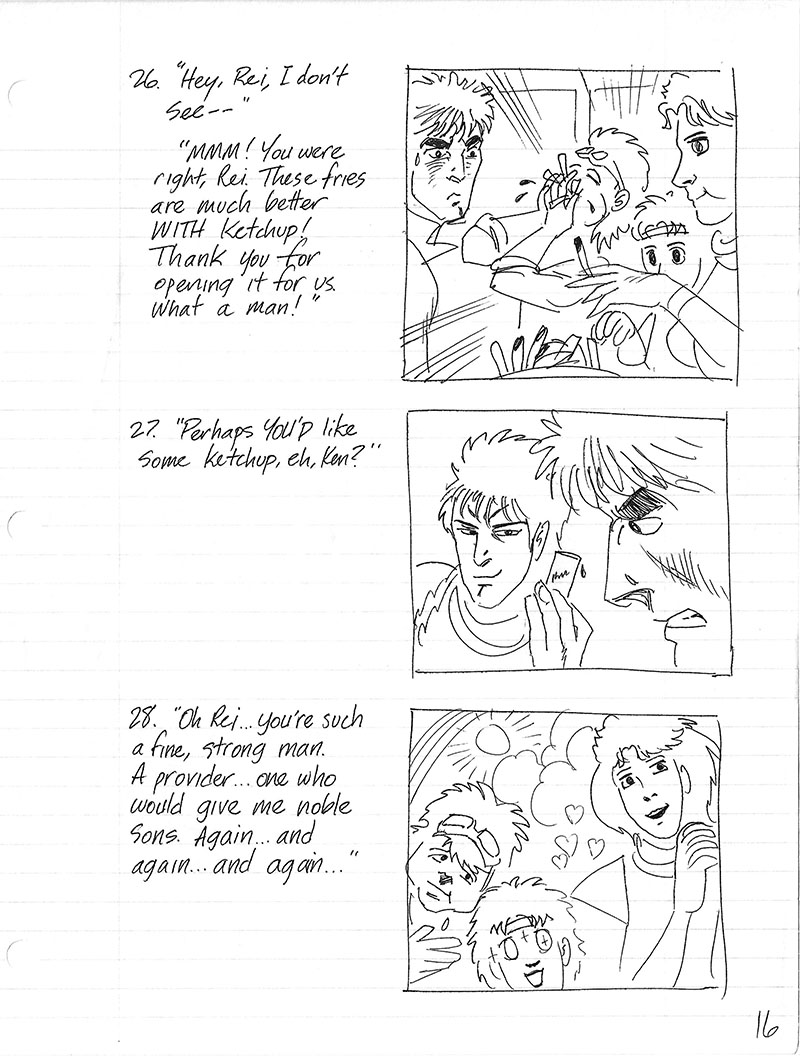 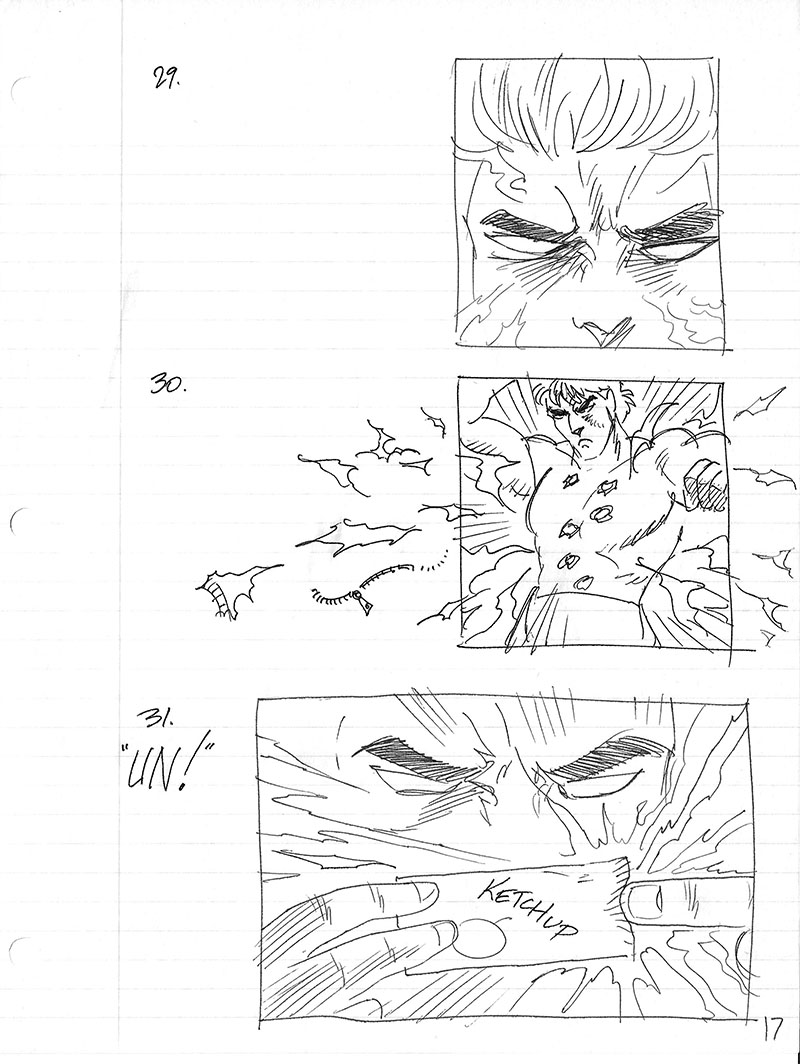 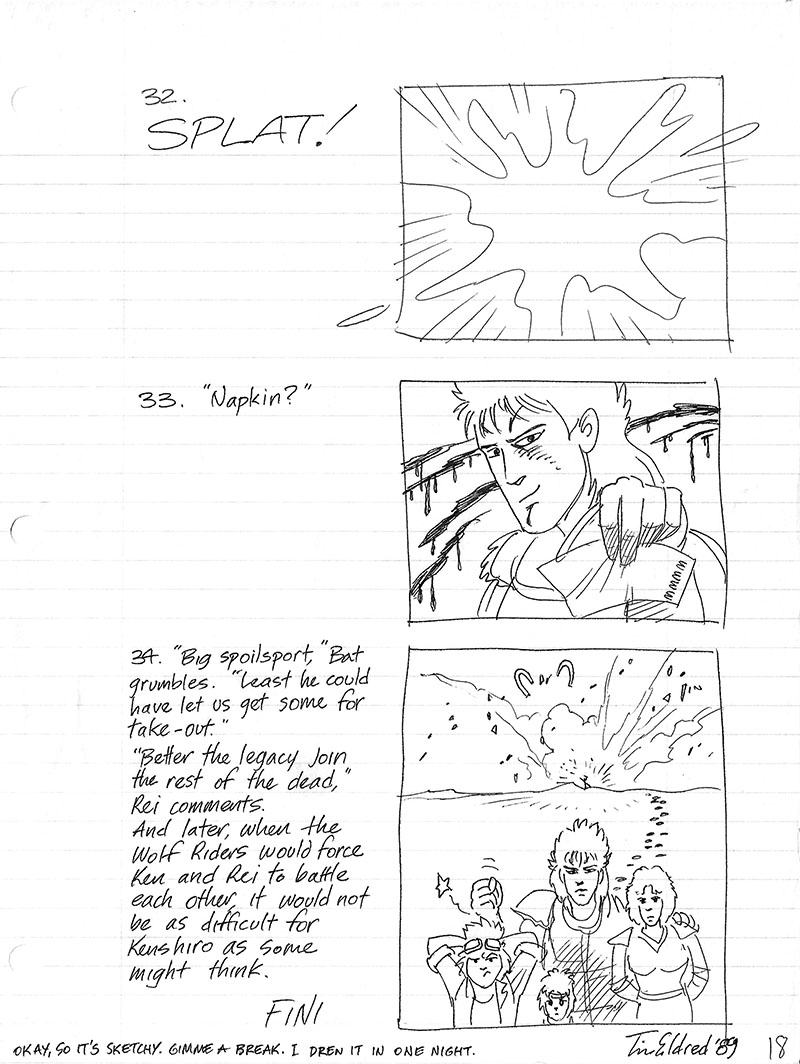