Fist of the North Star Music

It’s hard to overstate how incredibly popular the music is all over the world, especially the opening songs which have been classics since their creation. But that’s just one aspect of the total catalog. Here’s all the music I’ve been able to find over the years. Most of these are out of print, but I’ve provided serial numbers to aid in online searches. 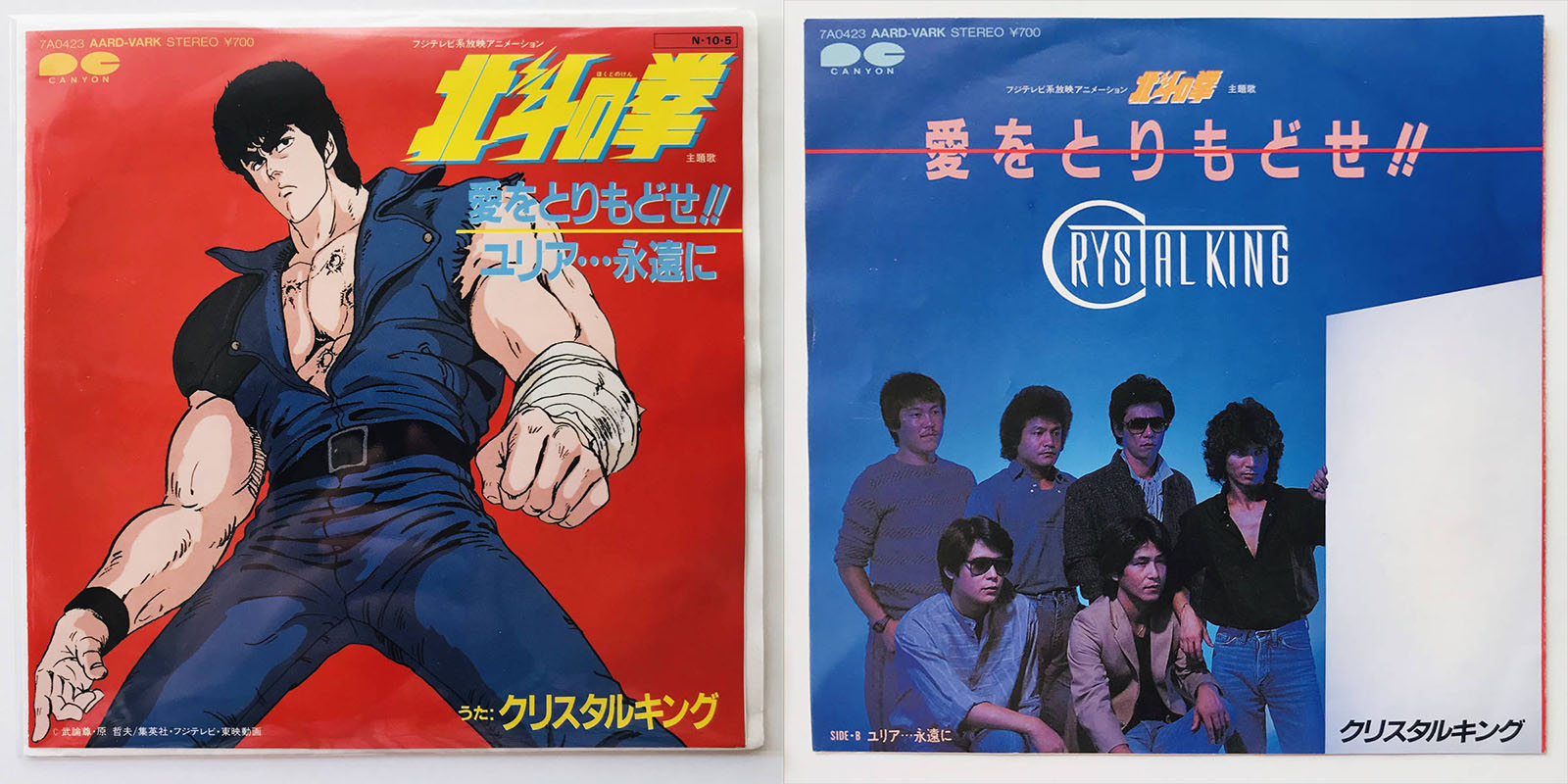 First OP/ED: Take Back the Love! and Yuria Forever by Crystal King (1984)

Take Back the Love! full song 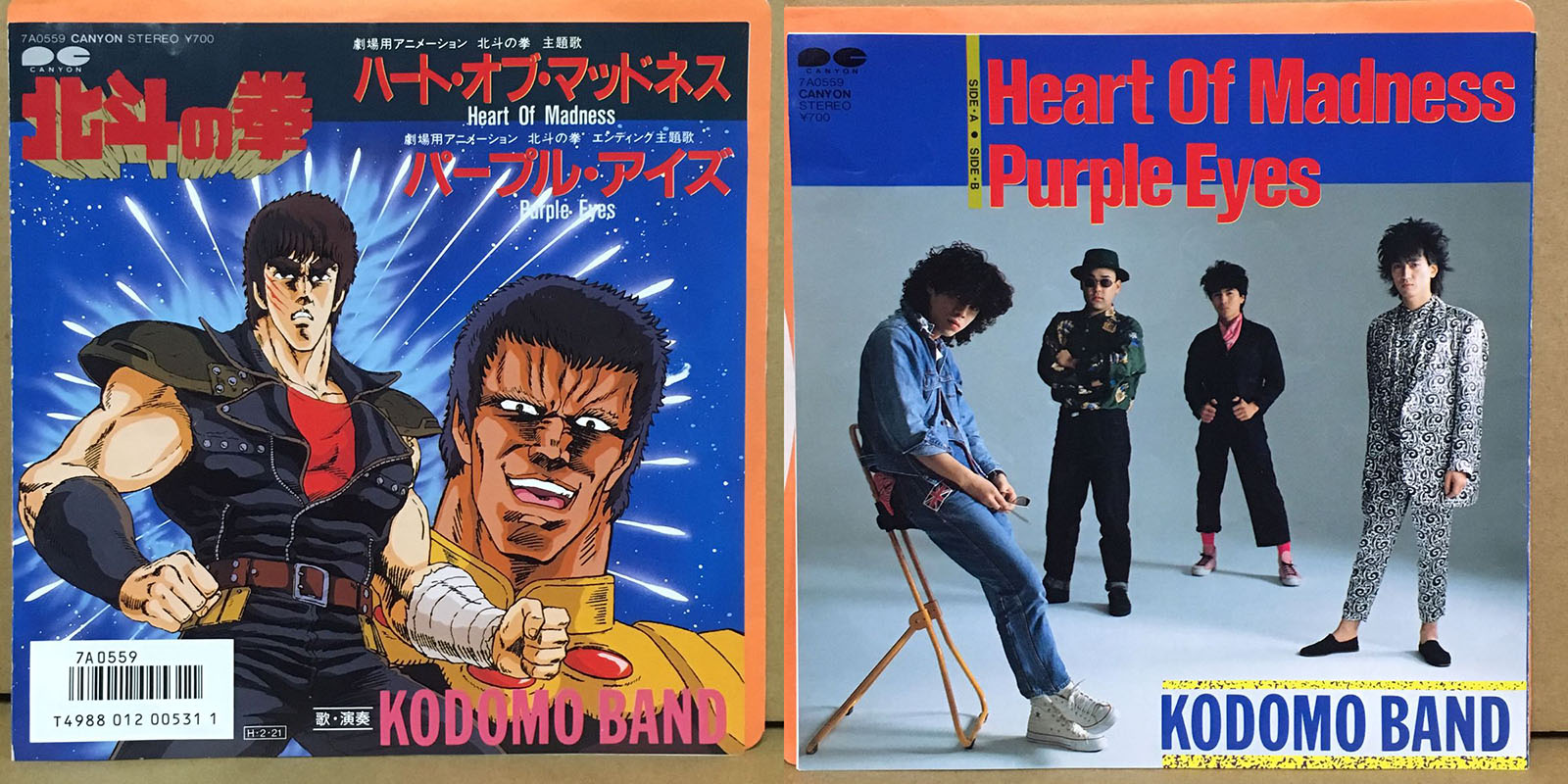 Heart of Madness segment from the movie 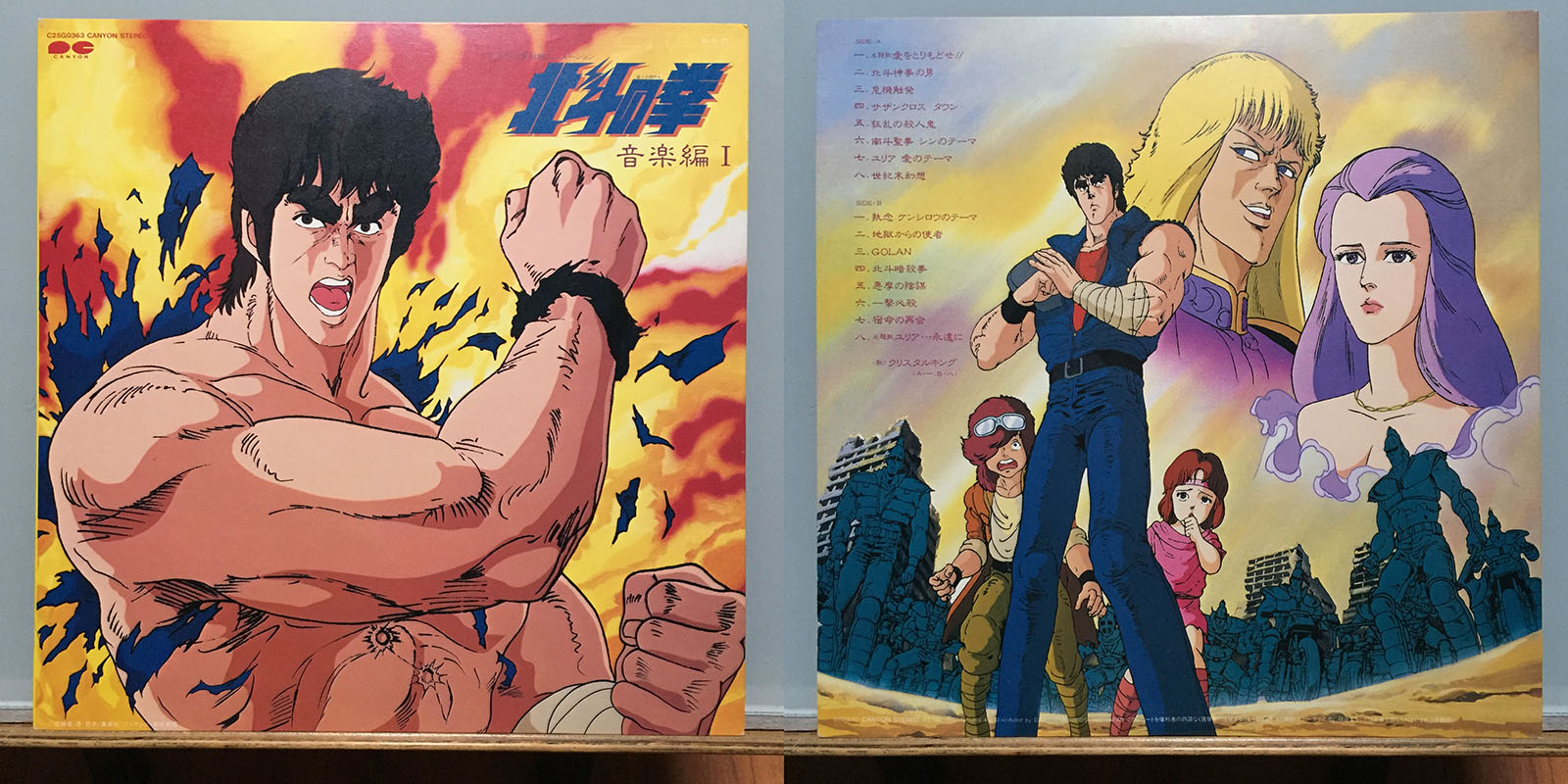 The first album of BGM from the TV series, including full versions of Take Back the Love! and Yuria Forever. Contains the earliest tracks heard in the anime, composed by Nozomi Aoki. As far as I know, it was never released on CD. 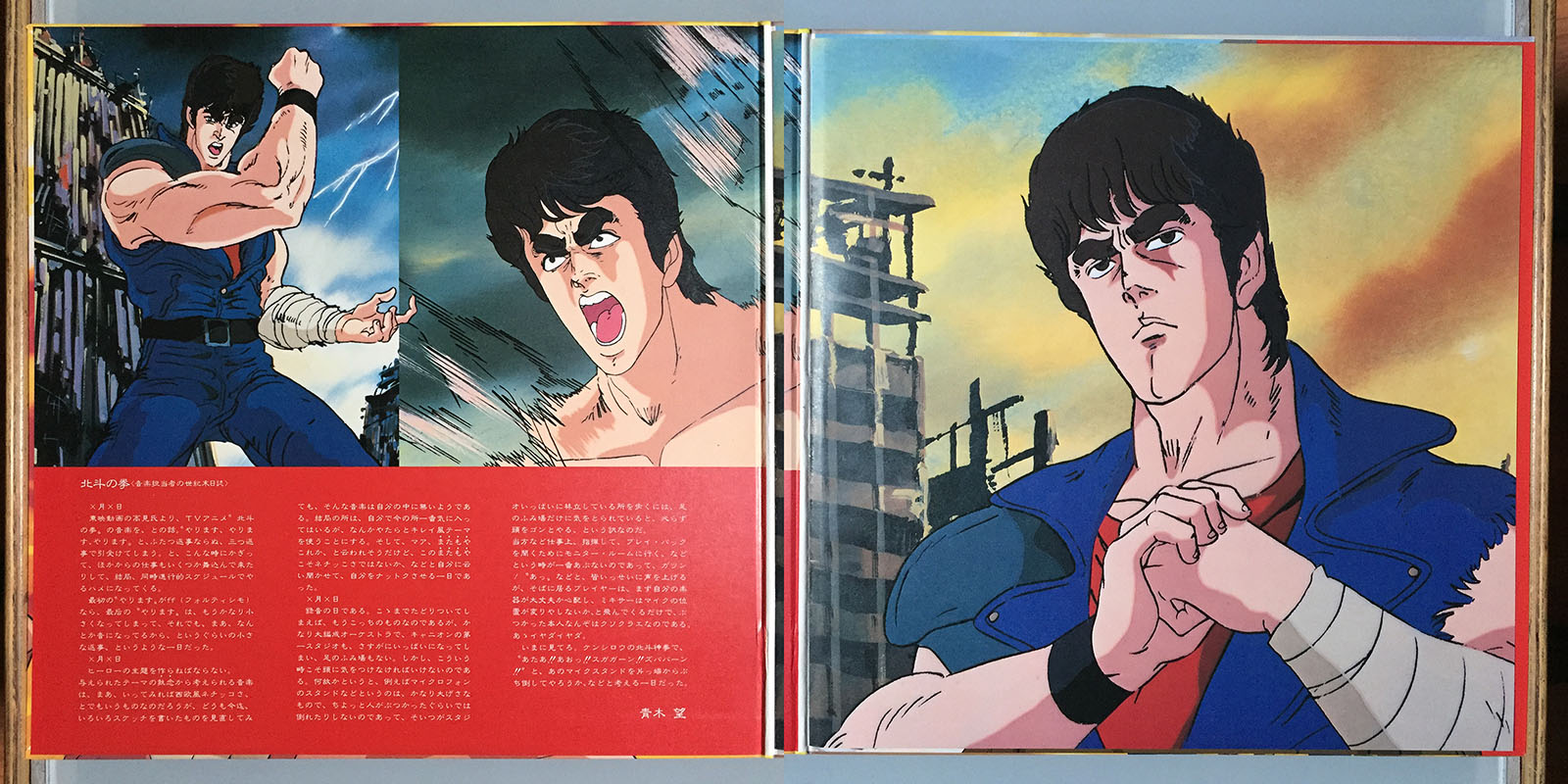 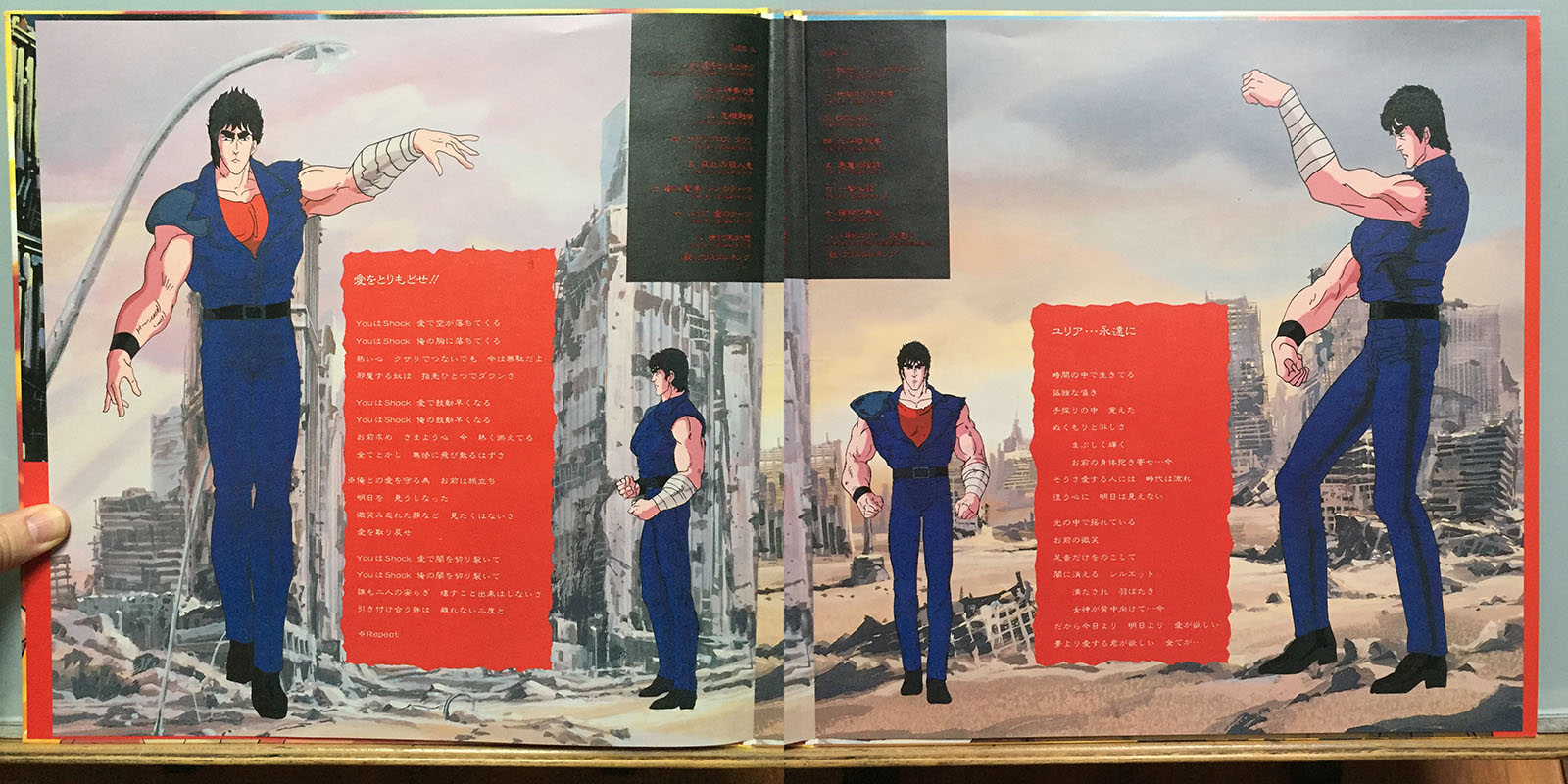 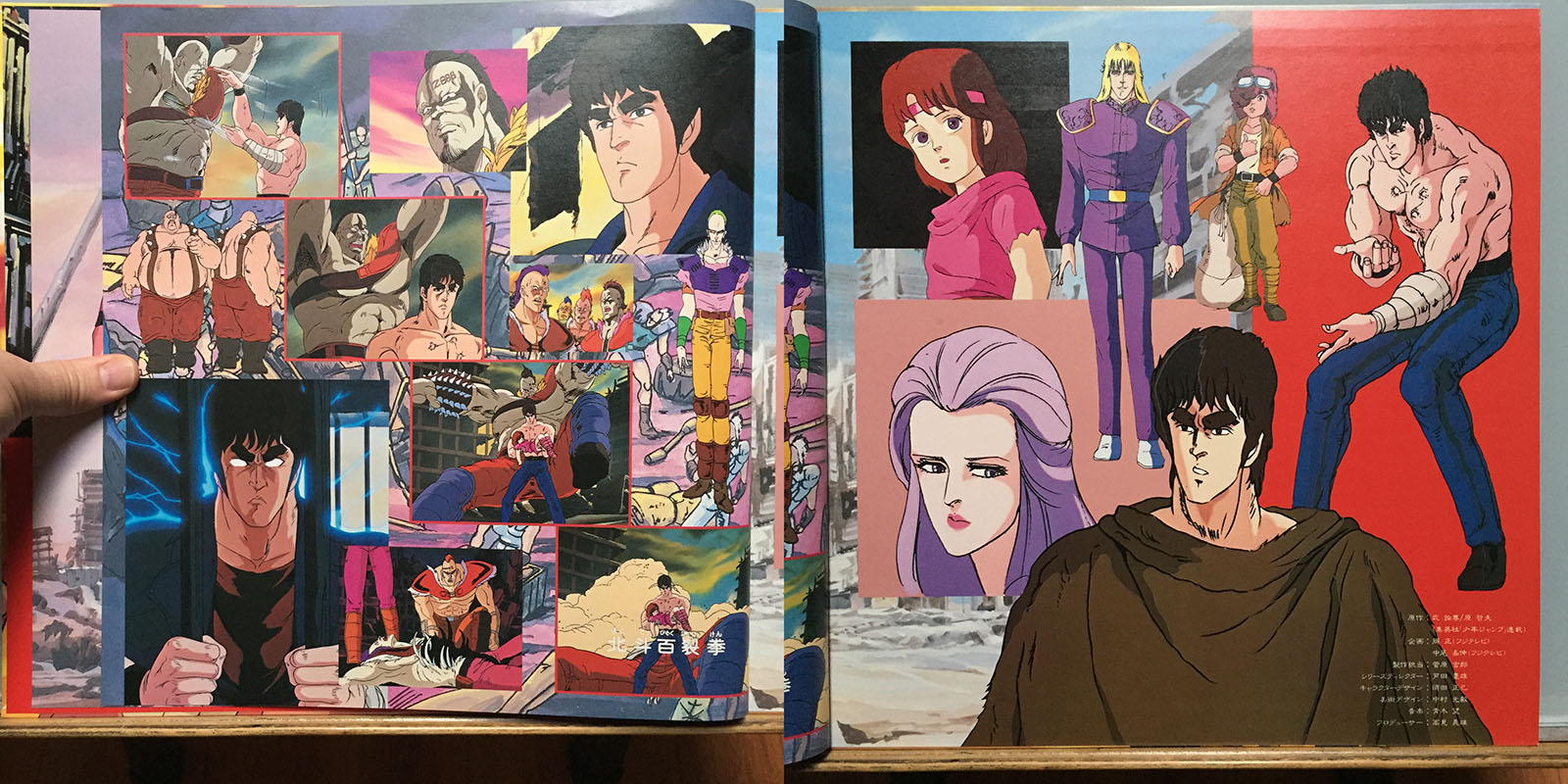 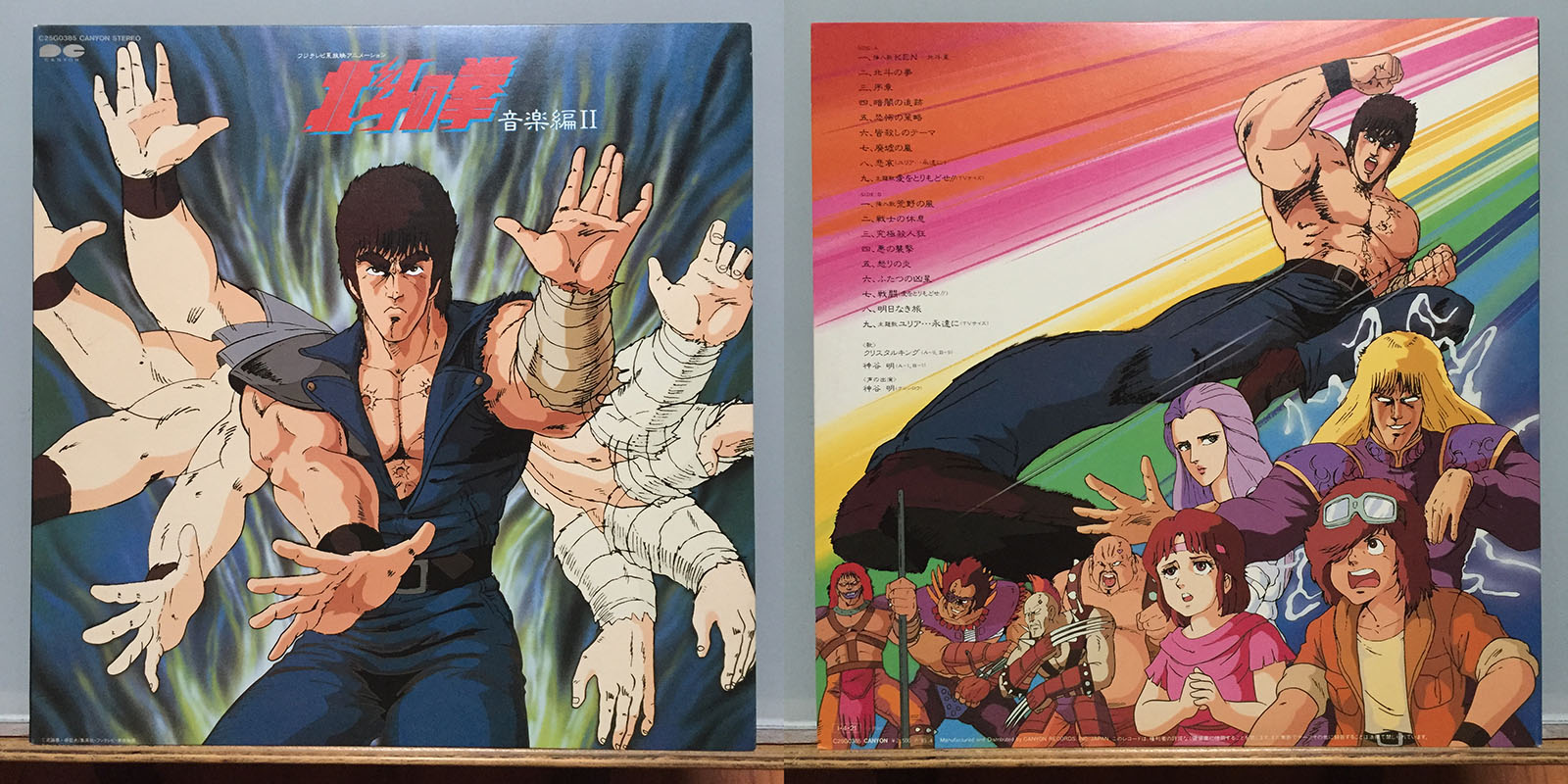 Contains the second batch of music for the TV series by Nozomi Aoki, including two “image songs” sung by Akira Kamiya (Kenshiro’s voice actor) and “TV size” versions of the OP and ED themes. This was the first place I ever saw “TV size” applied to theme songs, and the term became widely used aftward. In the 80s, BGM and OST albums typically contained full versions of the OP/ED songs until record labels figured out they could make more money by replacing them with “TV size” edits and reserving the full versions for single sales. The inclusion of “TV size” edits here might have led to this realization.

Like the first album, I have yet to see evidence that this one made it to CD. 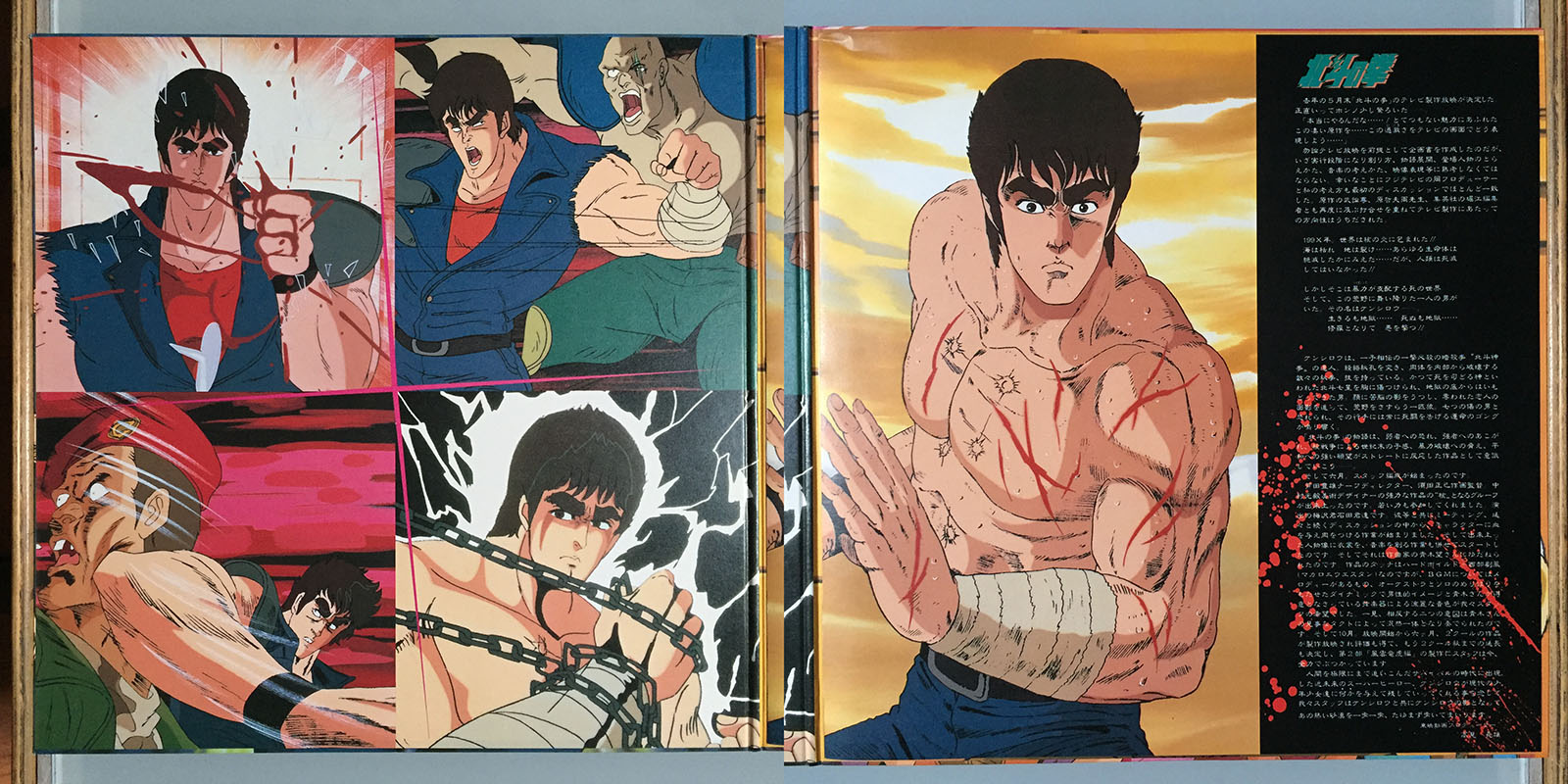 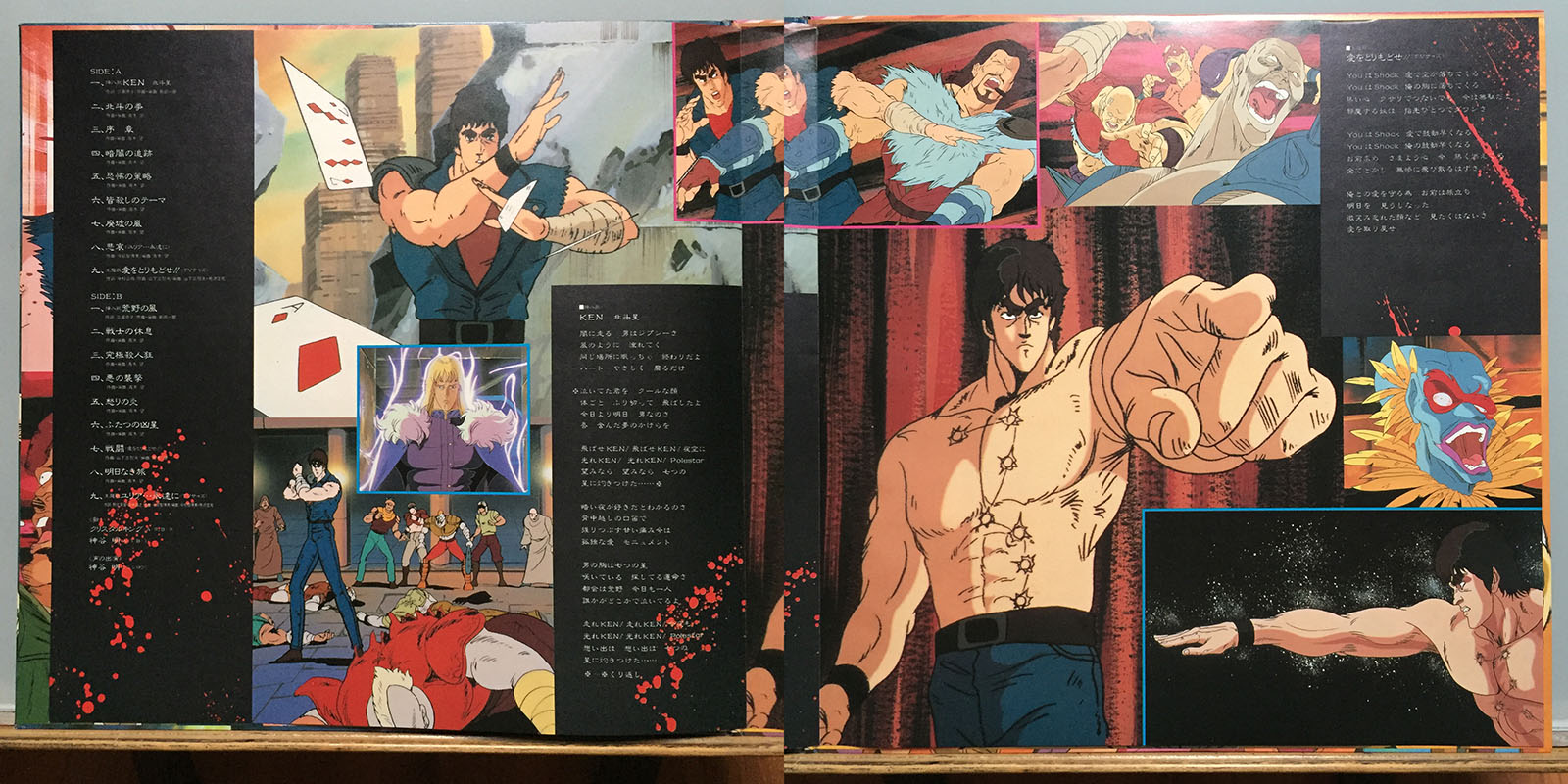 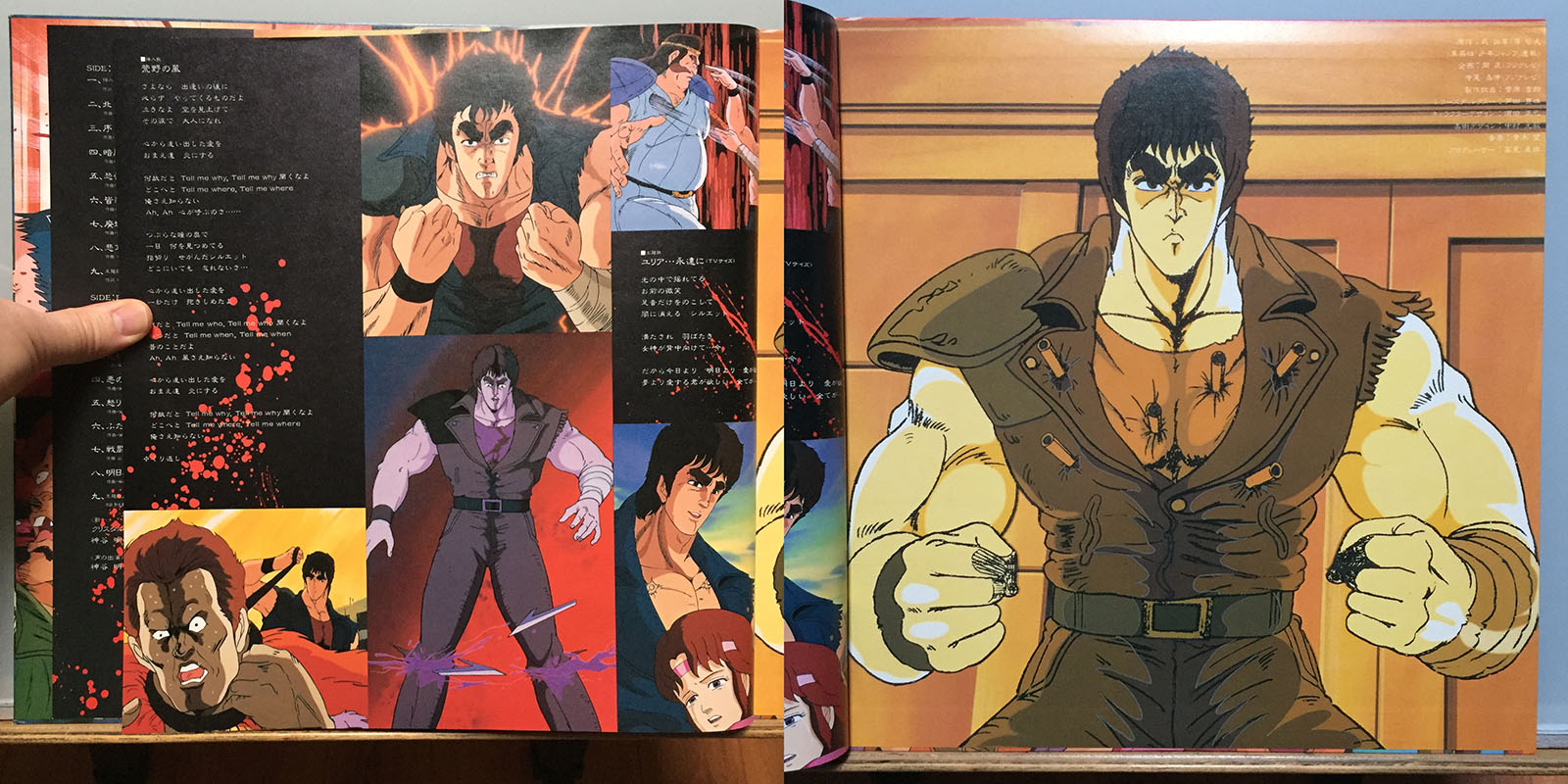 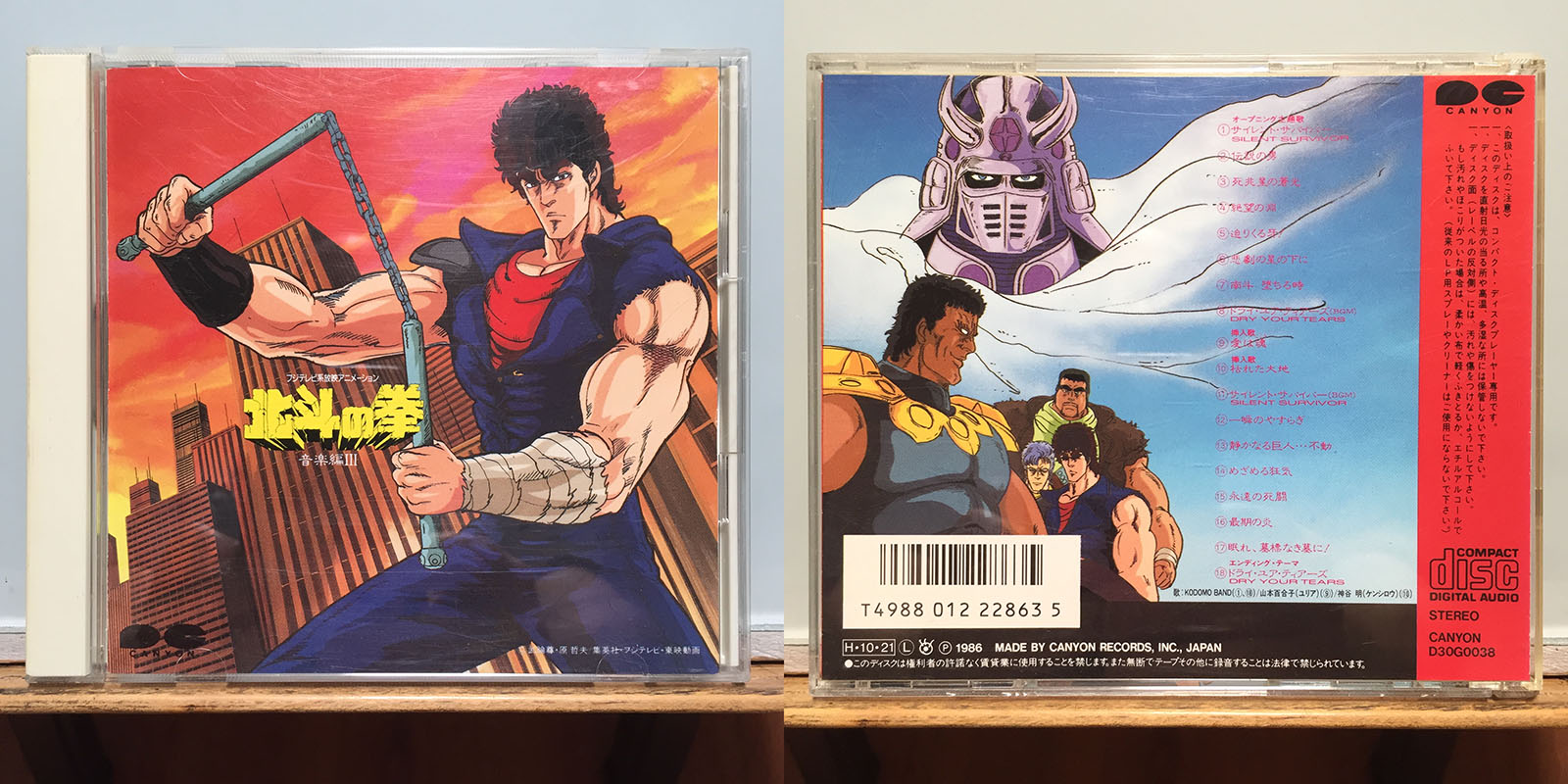 Contains BGM by Nozomi Aoki that began to appear later in the series with the OP/ED title change. Includes two insert songs and full versions of both Silent Survivor and Dry Your Tears by Kodomo Band. For my money, this is the best of the bunch. It feels like the score and the story have evolved together, reaching a point of maturity far beyond where they started.

Insert song: Love is the Soul 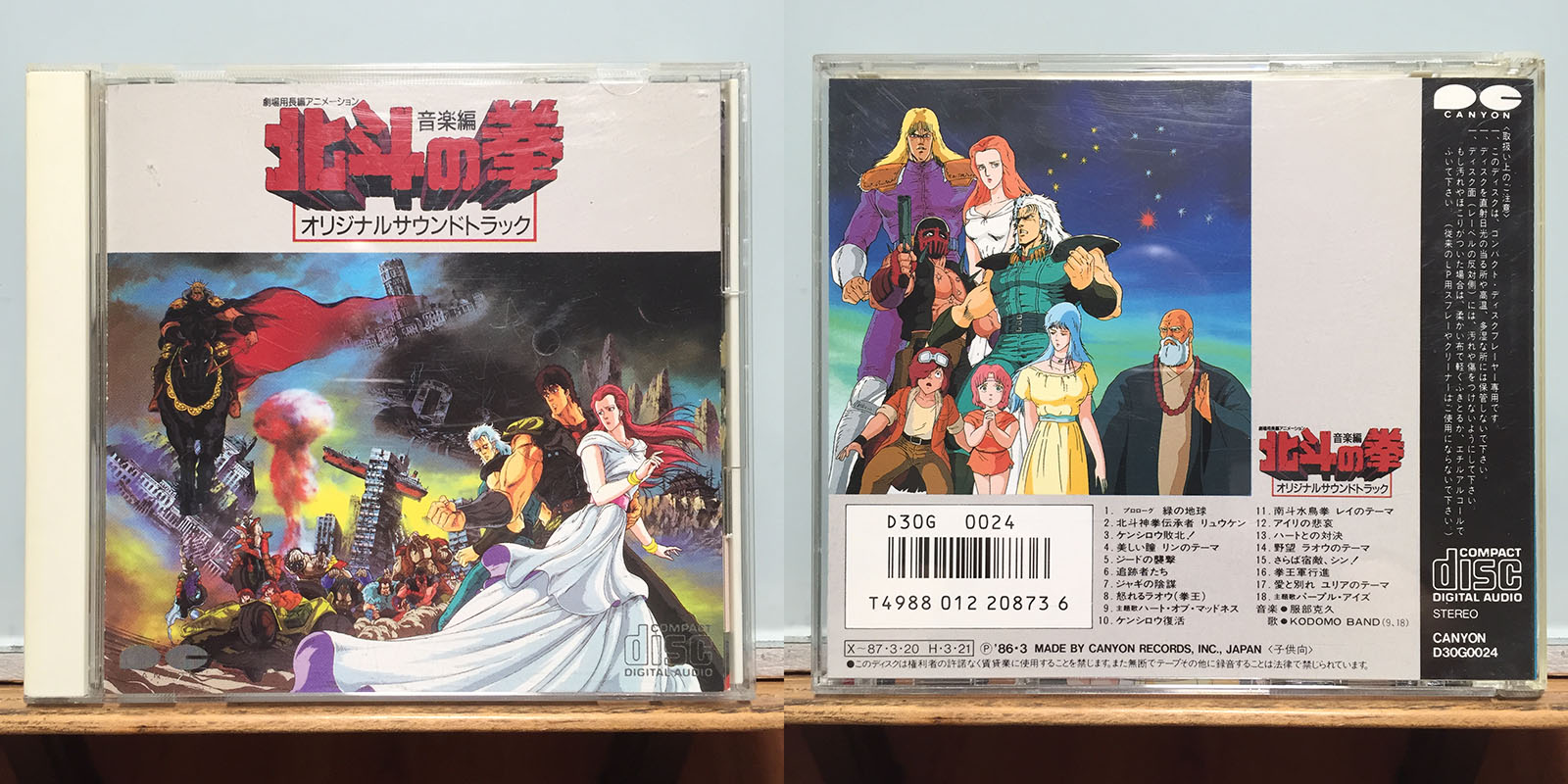 Music from the feature film by Katsuhisa Hattori; a big, brash dramatic score to match the tone of the film. Includes full versions of Heart of Madness and Purple Eyes by Kodomo Band. (But for some reason, they insist on singing the lyric as “Heart of Darkness.”) 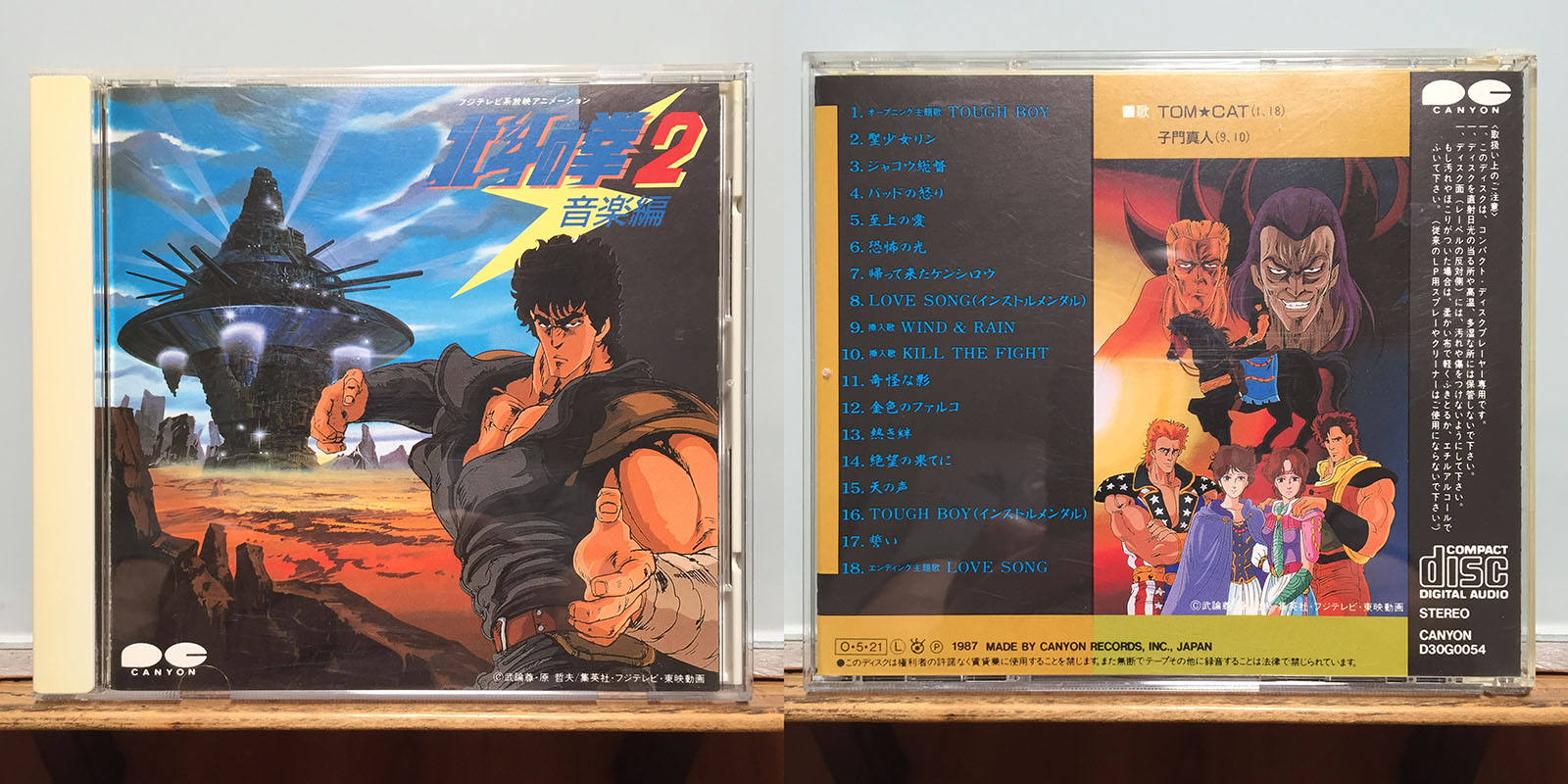 A new batch of music by Nozomi Aoki to freshen up the sound for the second series (though first series music continued throughout). Includes full versions of Tough Boy and Love Song by Tomcat, and two insert songs heard in the series.

Insert song: I Kill the Fight

Contains full versions of all the TV and movie songs by their original artists, including the image songs and insert songs. 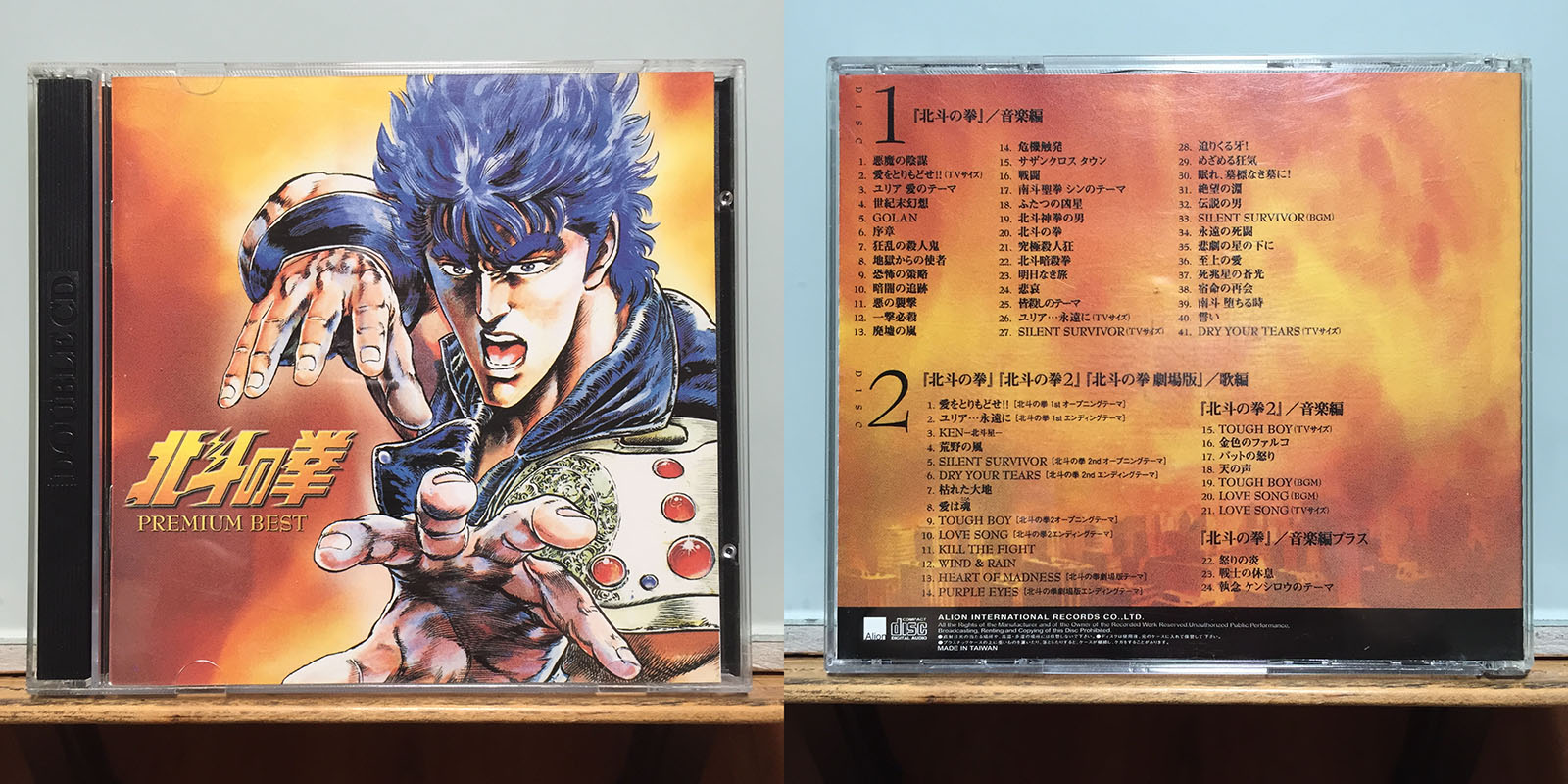 Essentially a “best of” collection. Disc 1 contains TV series music and TV size songs. Disc 2 contains full versions of all TV and movie songs along with a few tracks from FotNS 2 and the feature film.

Listen to the full album on Youtbe 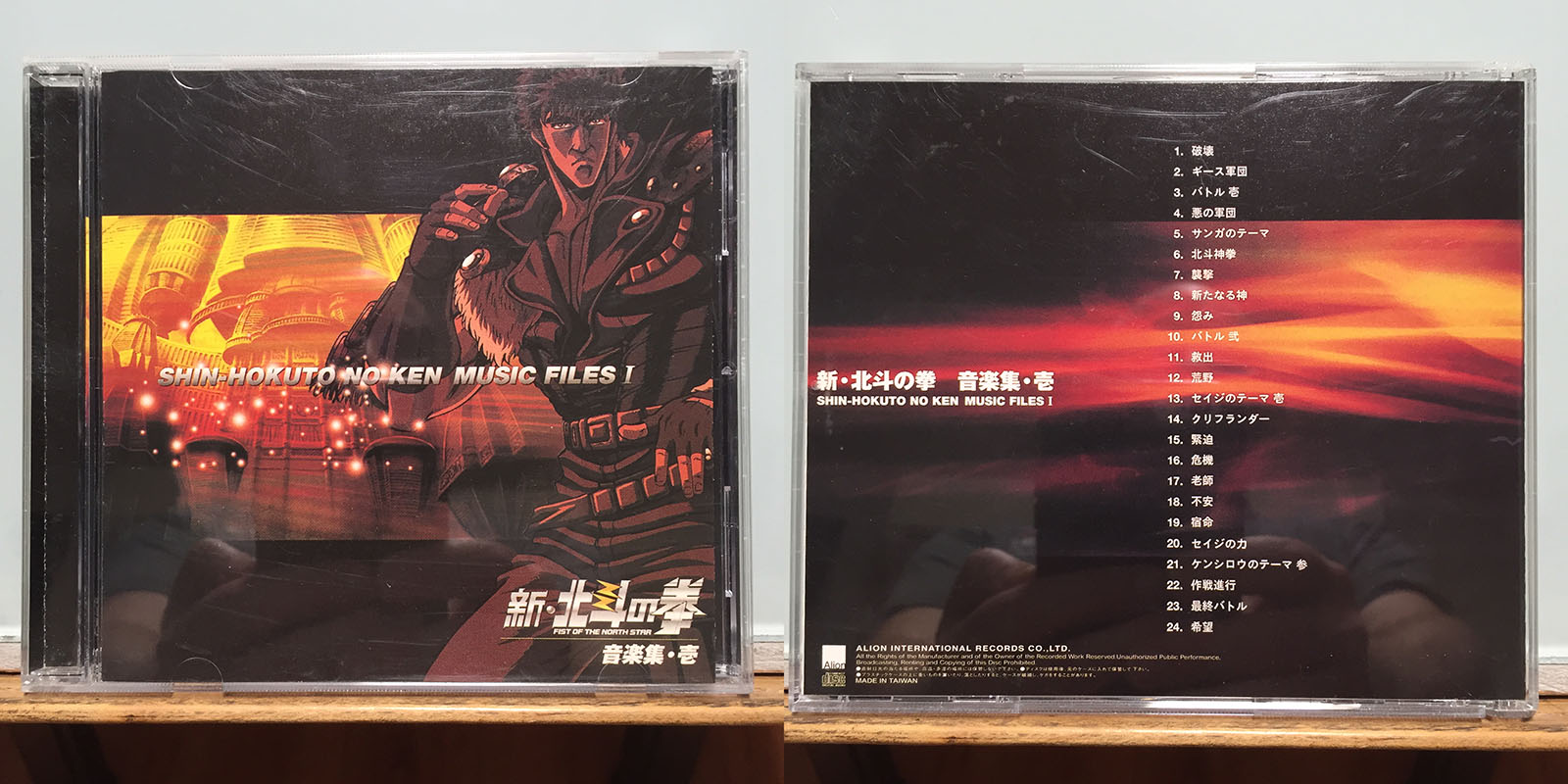 Contains the MAGNIFICENT score to the 2003 OAV series by Yasuharu Takanishi and rock band Yaiba. Another sorry case of a volume 1 with no followup. 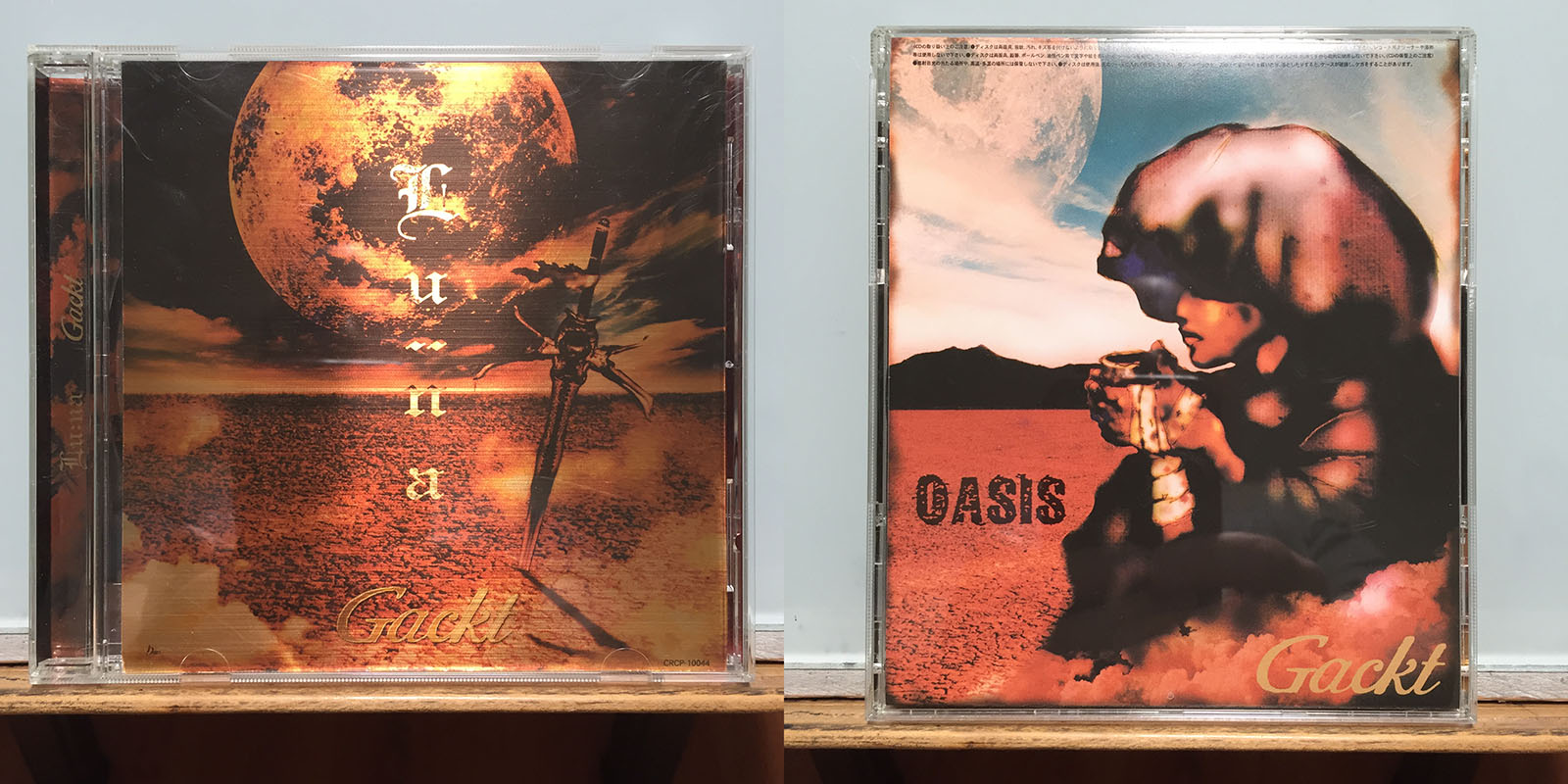 The two wildest, hardest FotNS OP and ED themes, composed for the OAV series which now seems to be slipping down the memory hole. These songs deserve way more attention than they got. In fact, stop reading this and give them your attention right now:

Luna opening title from the anime

Oasis ending title from the anime 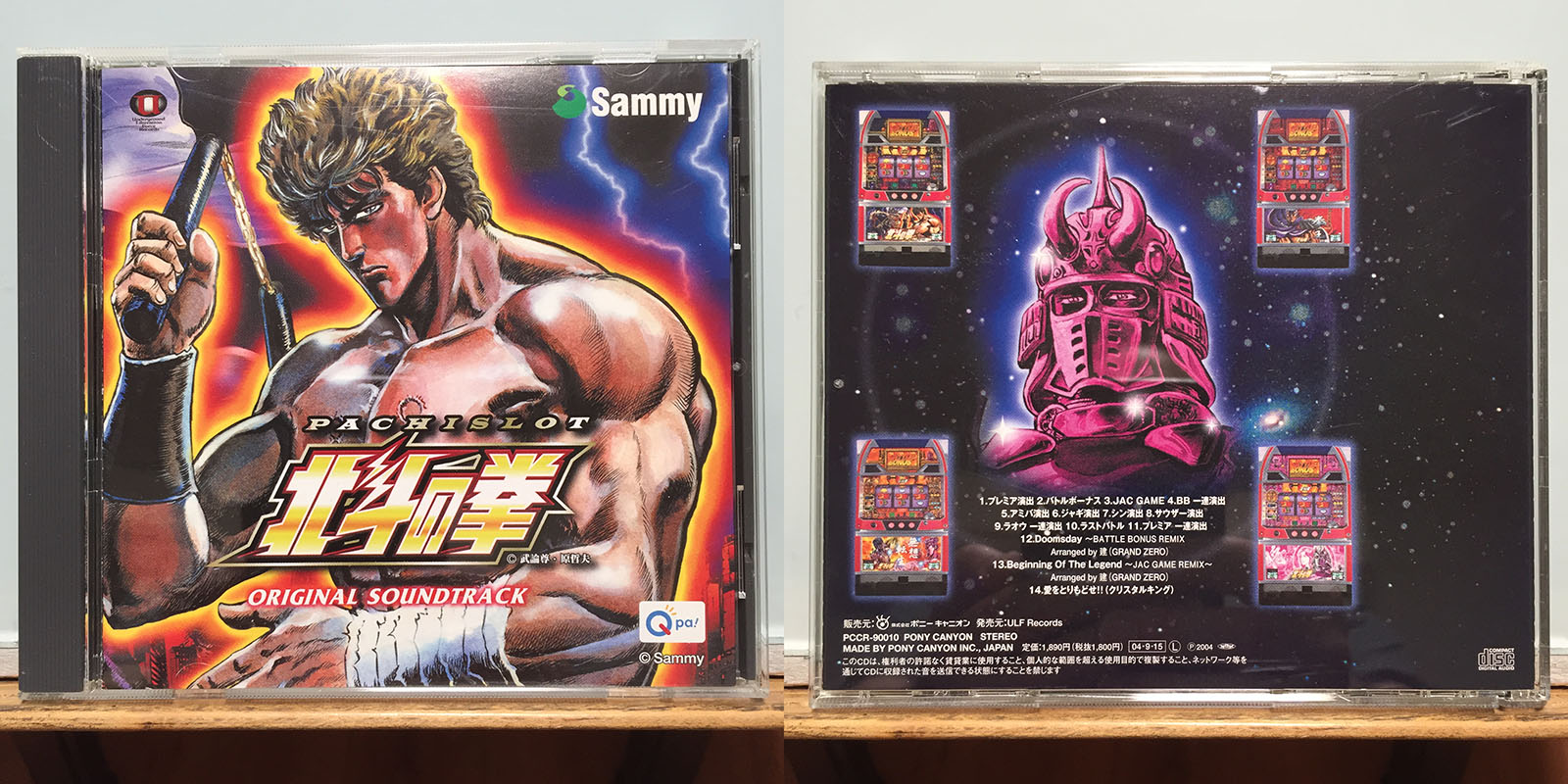 FotNS has had a strong presence in pachinko games since 2002. Every casino in Japan has one iteration or another, and they change constantly. Music from many of these games has made its way to CD. I don’t follow that side of the franchise, but I took a chance on this disc to see if it had the power to change my mind. It did not. 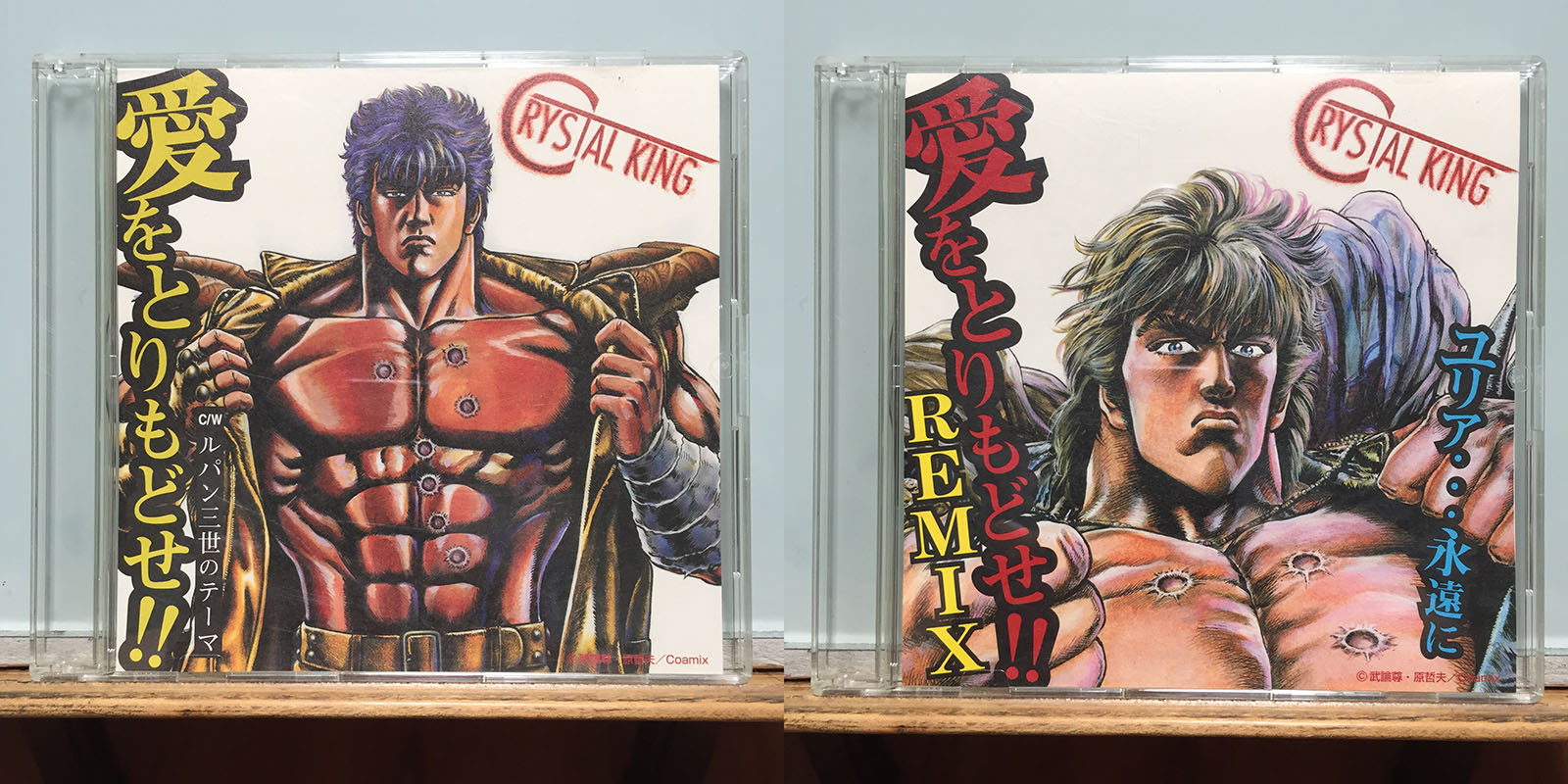 Crystal King: Take Back the Love!

A new cover of Take Back the Love! with the Lupin III theme as a bonus track.

Three cover versions of Take Back the Love! and Yuria Forever.

There was no known tie-in between these CD singles and any specific project in 2004, so it was probably a gesture to commemorate the 20th anniversary. It was the first new version of the songs since Crystal King originally recorded them in 1983, and they definitely brought back the thunder. 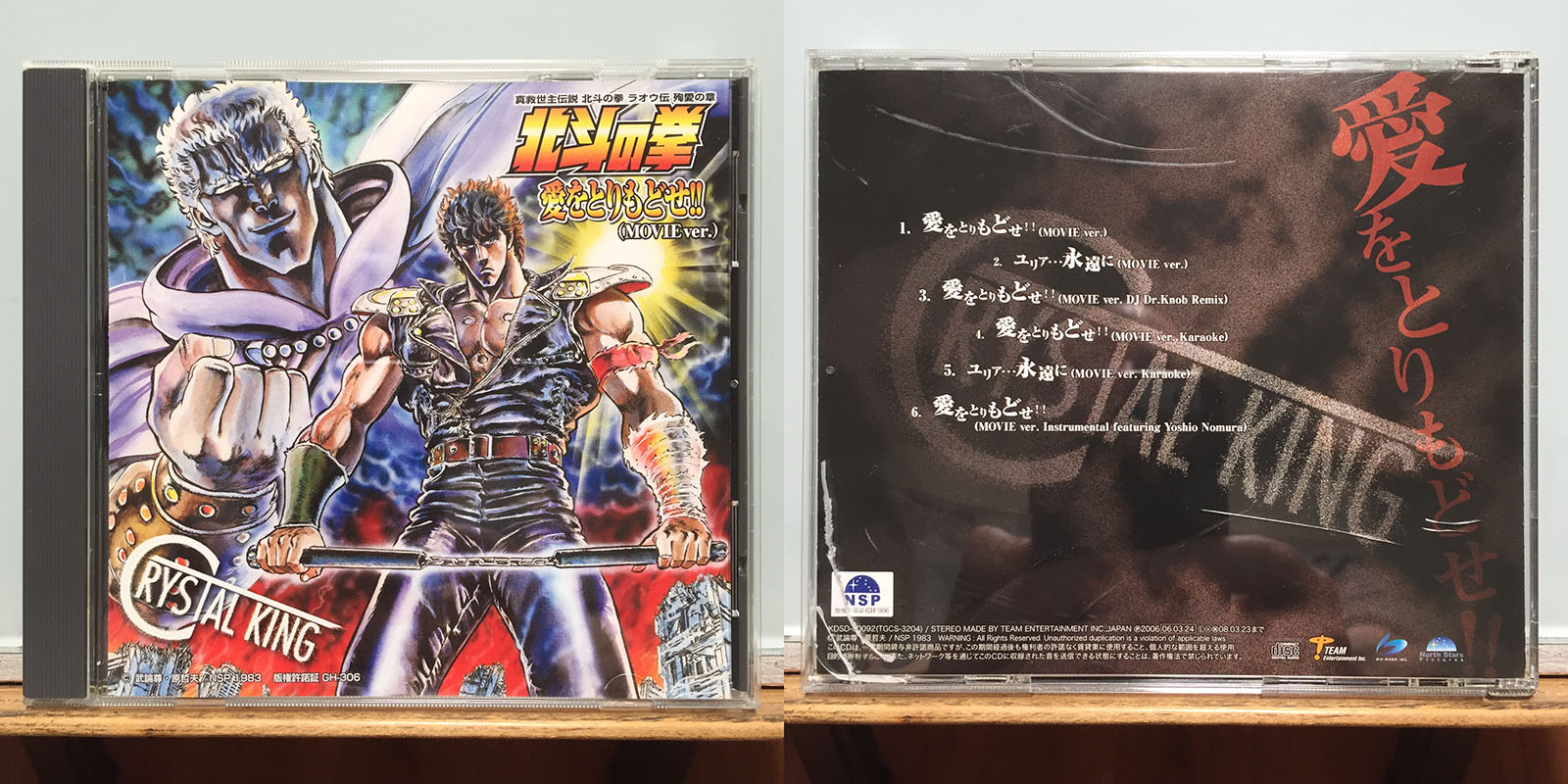 Four versions of the classic OP and two more of Yuria Forever. CD single tie-in with the 2006 revival anime.

Take Back the Love! movie version 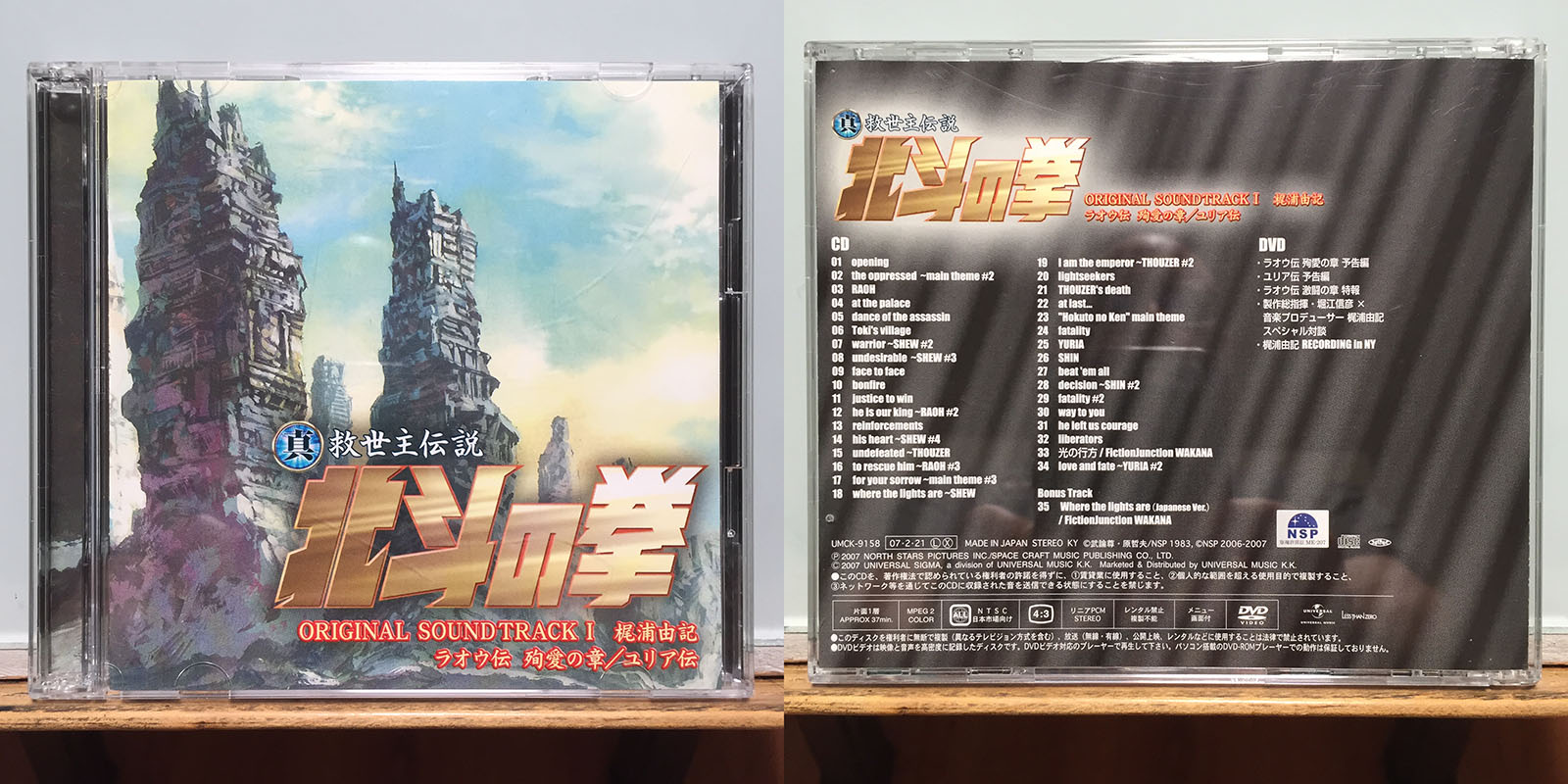 Fist of the North Star Legend of the True Savior, Original Soundtrack 1

Score for the first two revival anime projects starting in 2006 with lush, gorgeous music by the prolific Yuki Kajiura (A.K.A. FictionJunction). Includes a DVD with trailers, a report on the next film in the series, and a music production documentary. The album was titled “Original Soundtrack I,” but there was no followup, alas. There really should have been. 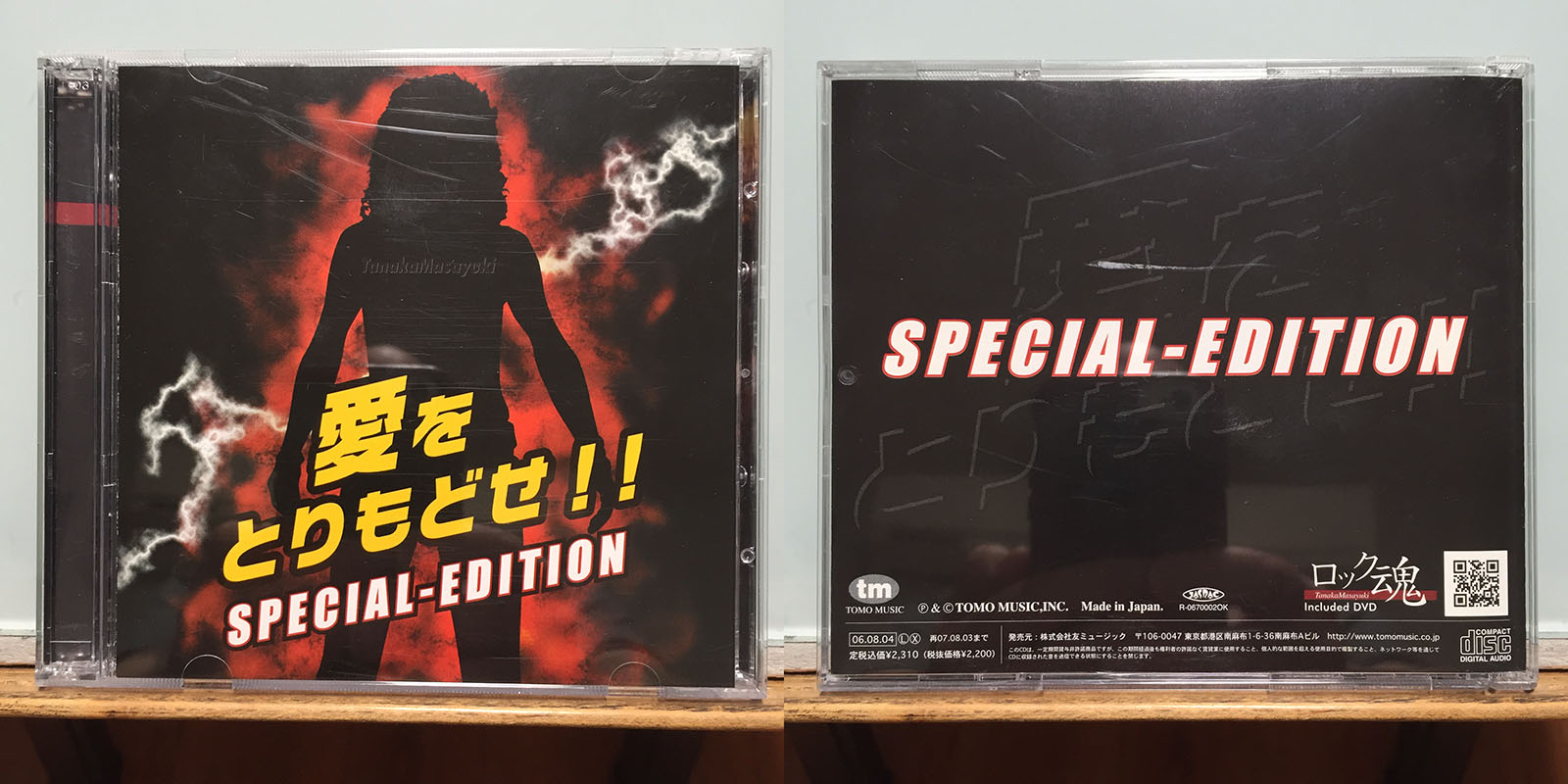 Take Back the Love! Special Edition

A terrific collection of rock covers by Tanaka Masayuki (of Crystal King) feat. Tomcat. Includes three versions of Take Back the Love!, three versions of Tough Boy, two of Yuria Forever, and one original composition. A bonus DVD contains a 17 minute interview with Masayuki.

Take Back the Love! TV performance by Tanaka, 2006 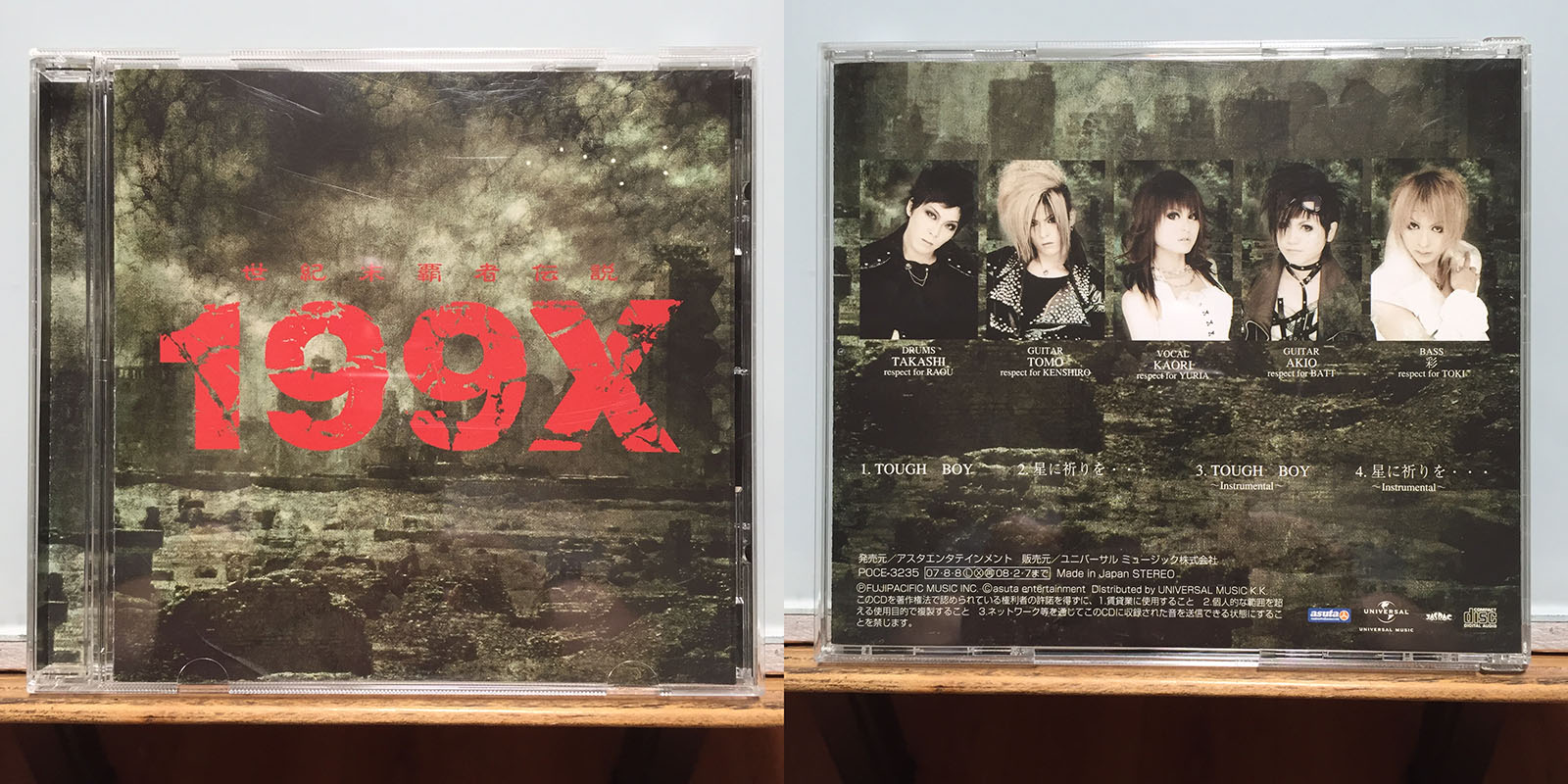 The Legend of the Savior at the End of the Century: 199X

Contains a cover of Tough Boy by all-girl rock band 199X; vocal and off-vocal versions plus an original song. 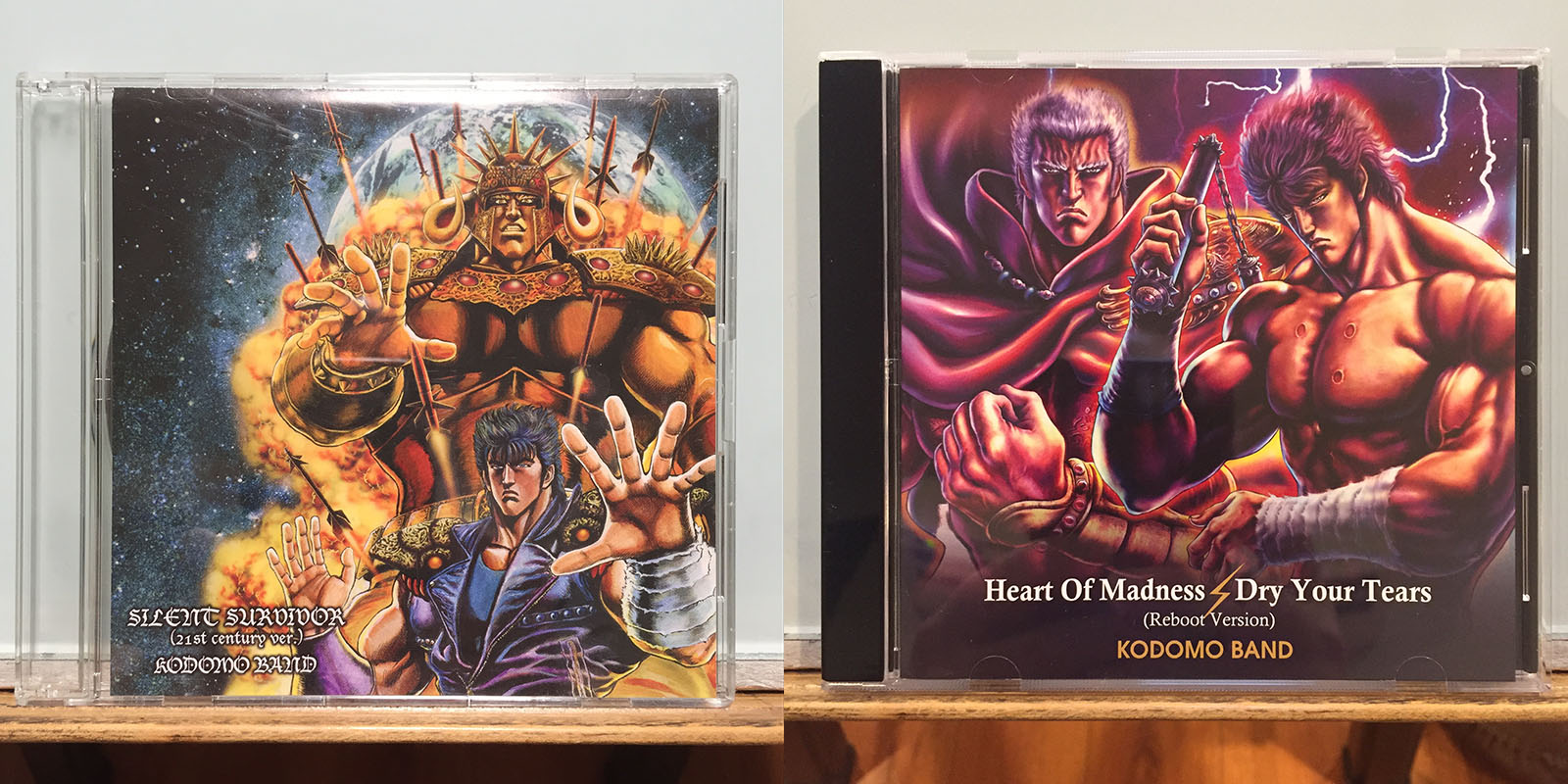 Kodomo Band returned for the anime revival to cover two of their classic songs, Silent Survivor and Heart of Madness (which they actually sang as “madness” in this version). Three versions of each track. HIGHLY RECOMMENDED!

Kodomo Band came back again to perform these songs for a pachinko game. Contains two versions of each. HIGHLY RECOMMENDED! 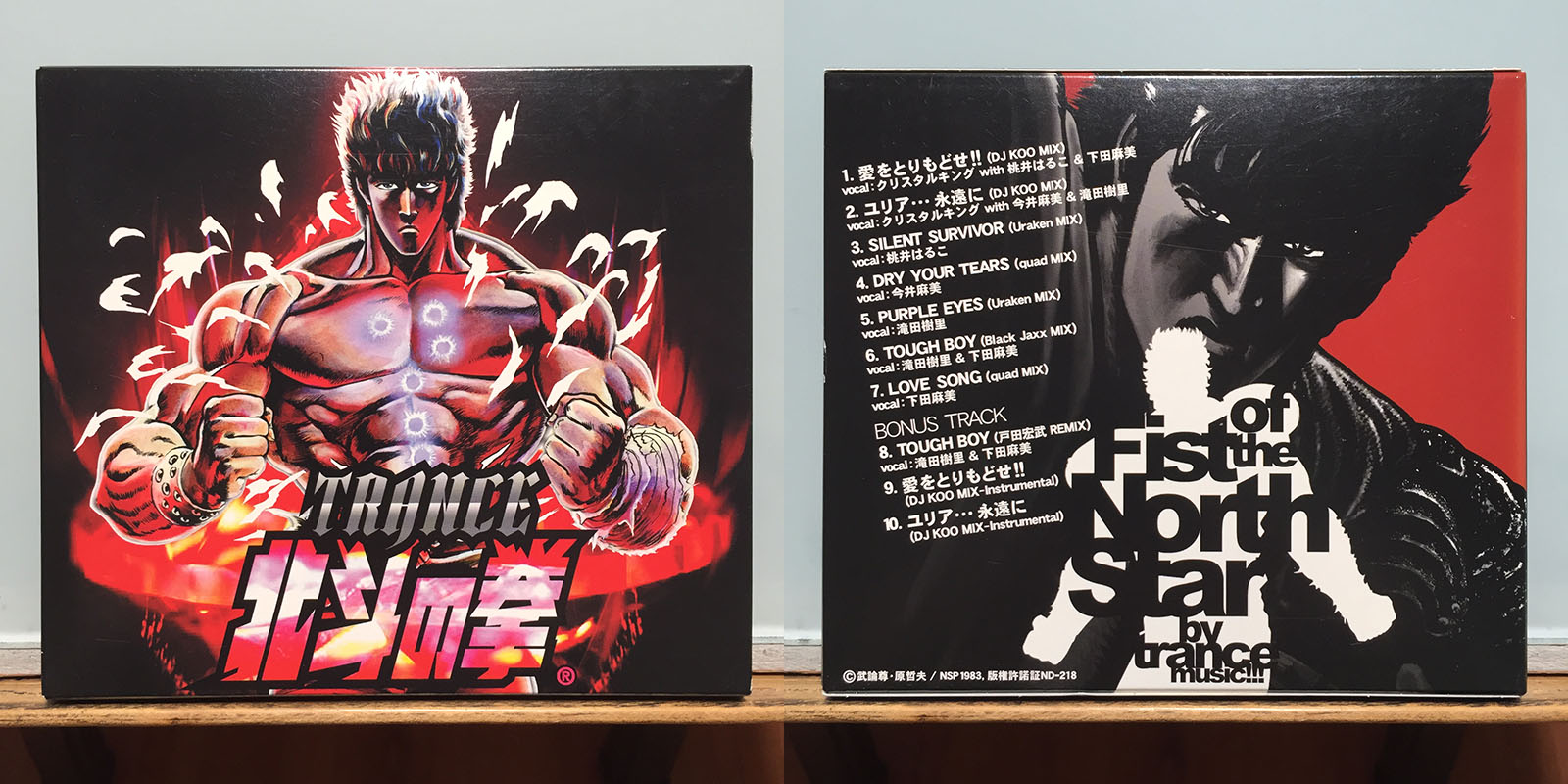 Trance Fist of the North Star

A collection of seven songs covered in dance synthesizer style. And it actually kinda works. 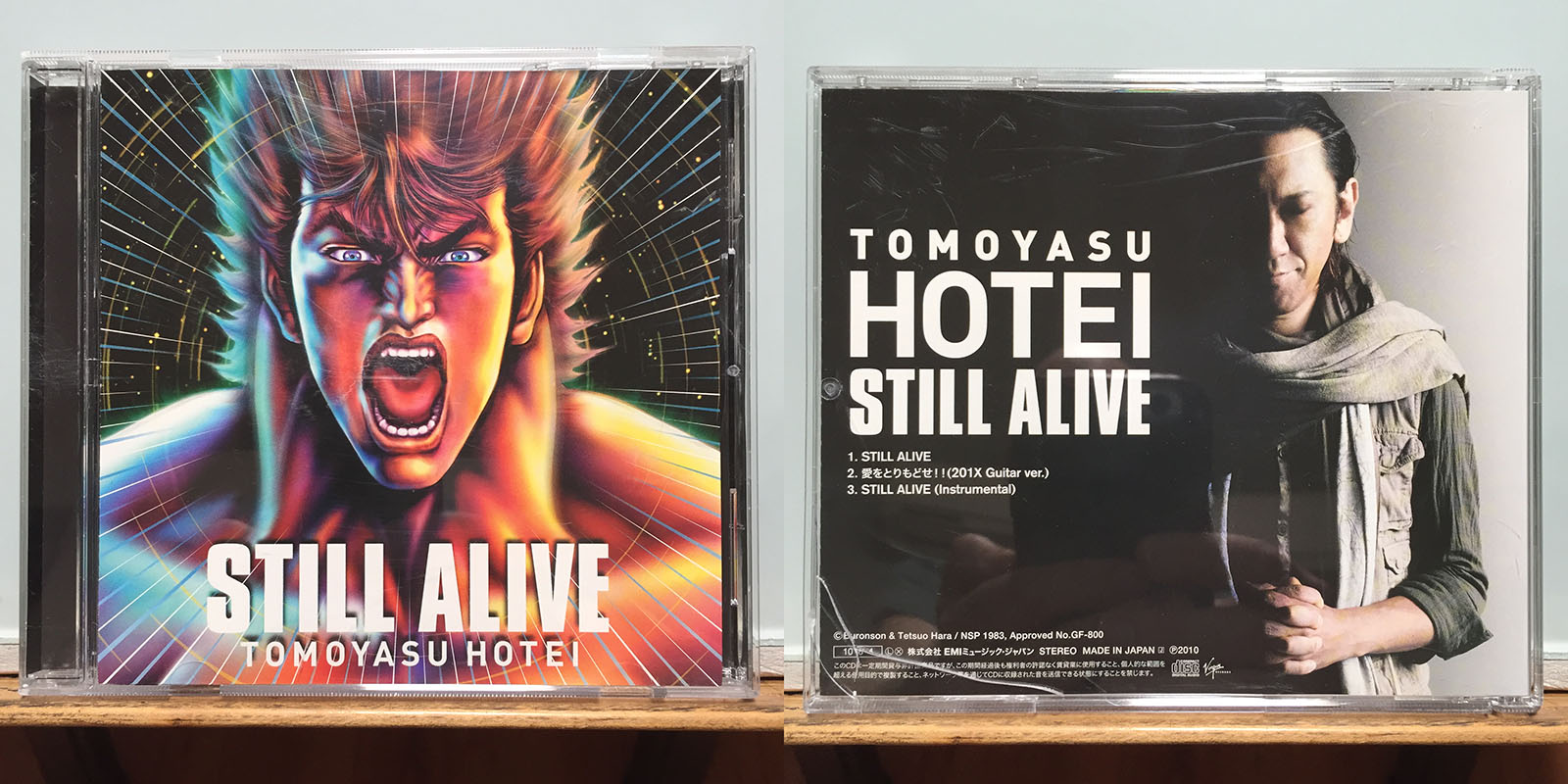 CD single by rock legend Tomoyasu Hotei, contains a virtuoso cover of Take Back the Love!! referred to as the “201X Guitar Ver.” 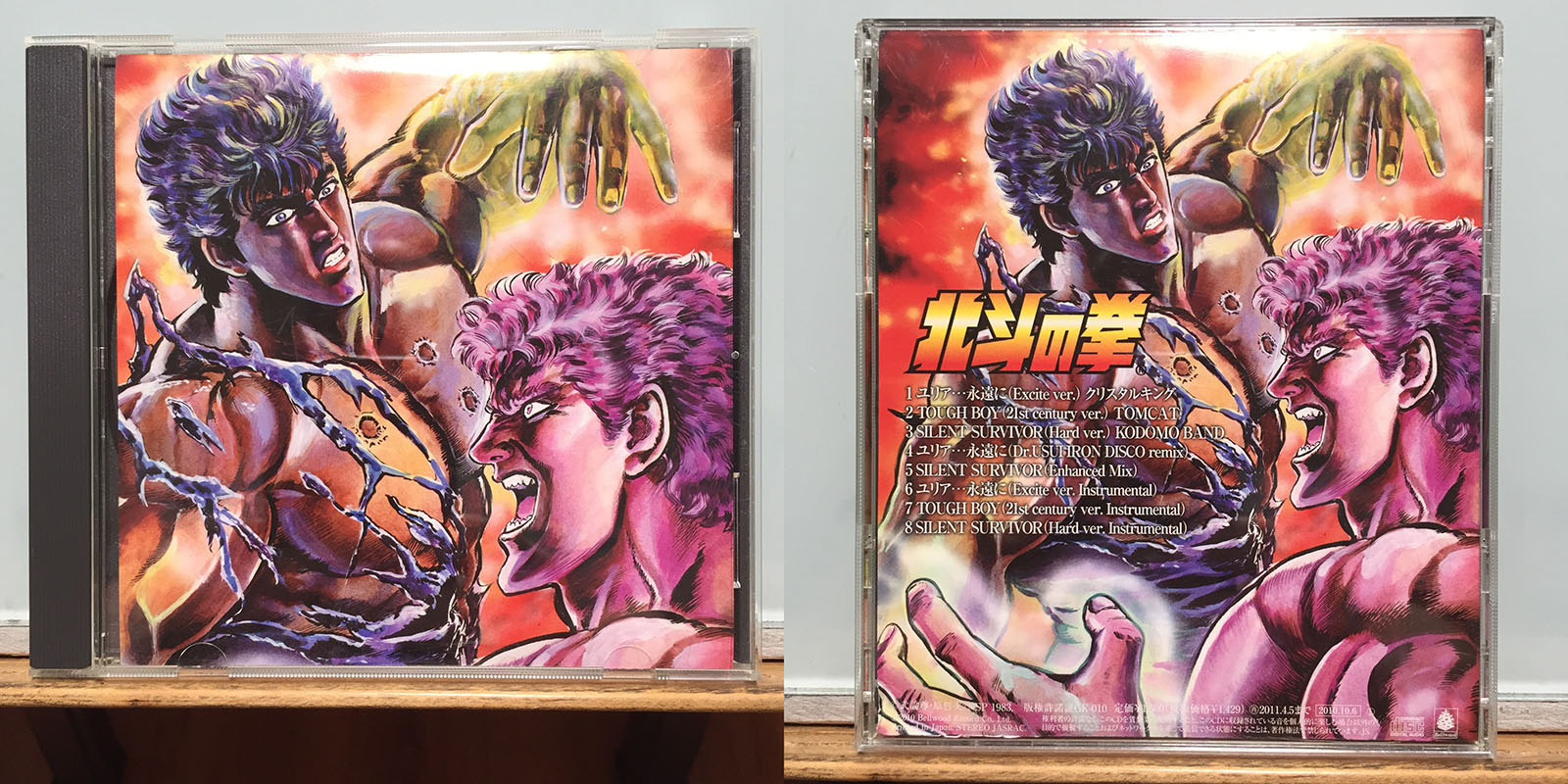 The origin of this one is a bit opaque, but the content isn’t; multiple covers of three classic songs (with original artists) ready to assault your senses. 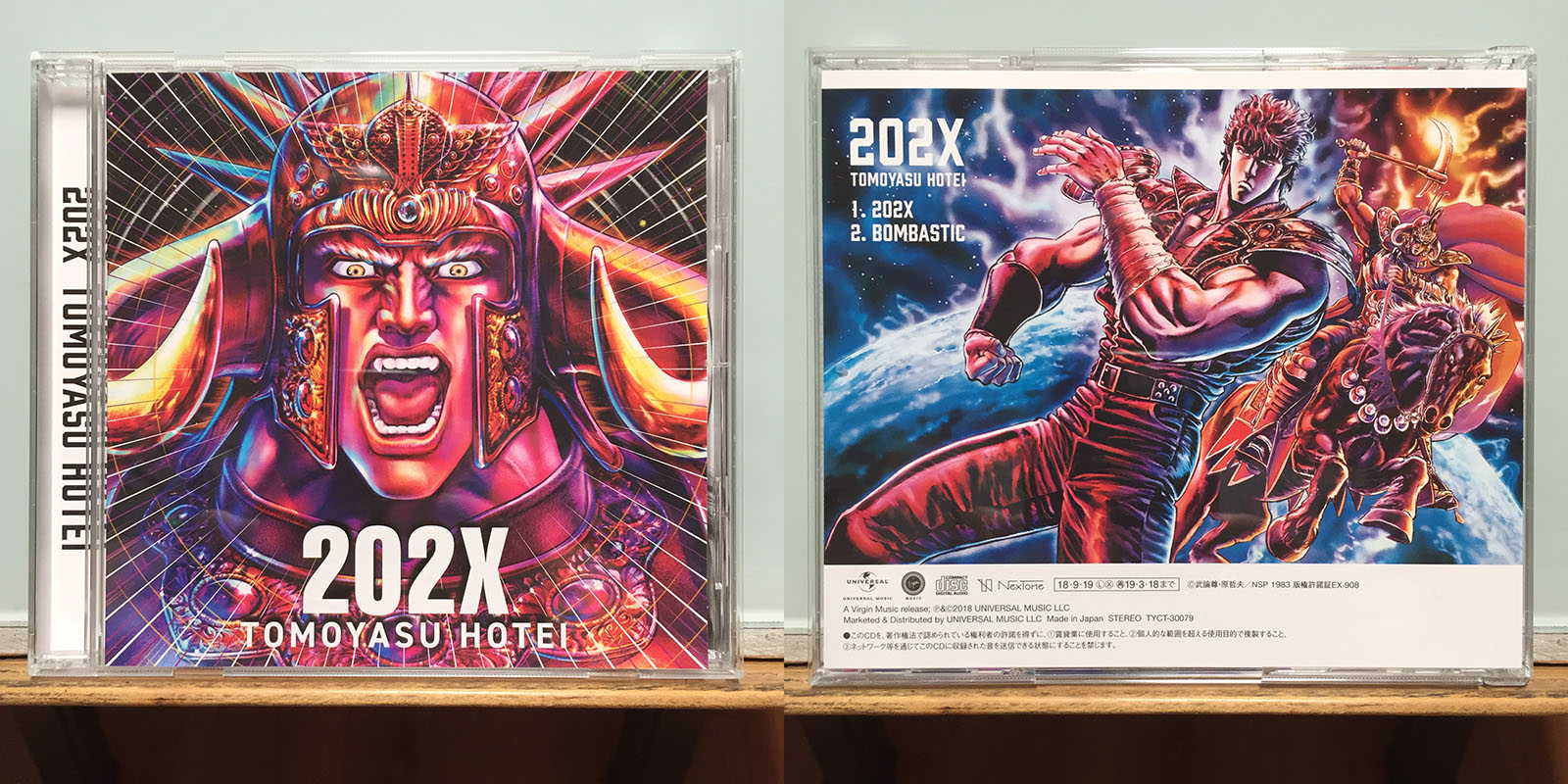 After his “201X” guitar cover of Take Back the Love! became a hit in 2009, Hotei returned for this 35th anniversary tribute to FotNS with two original songs. His “guitar god” status earned him authentic album art by Tetsuo Hara.

Buronson and Hara at a 35th anniversary event with Hotei 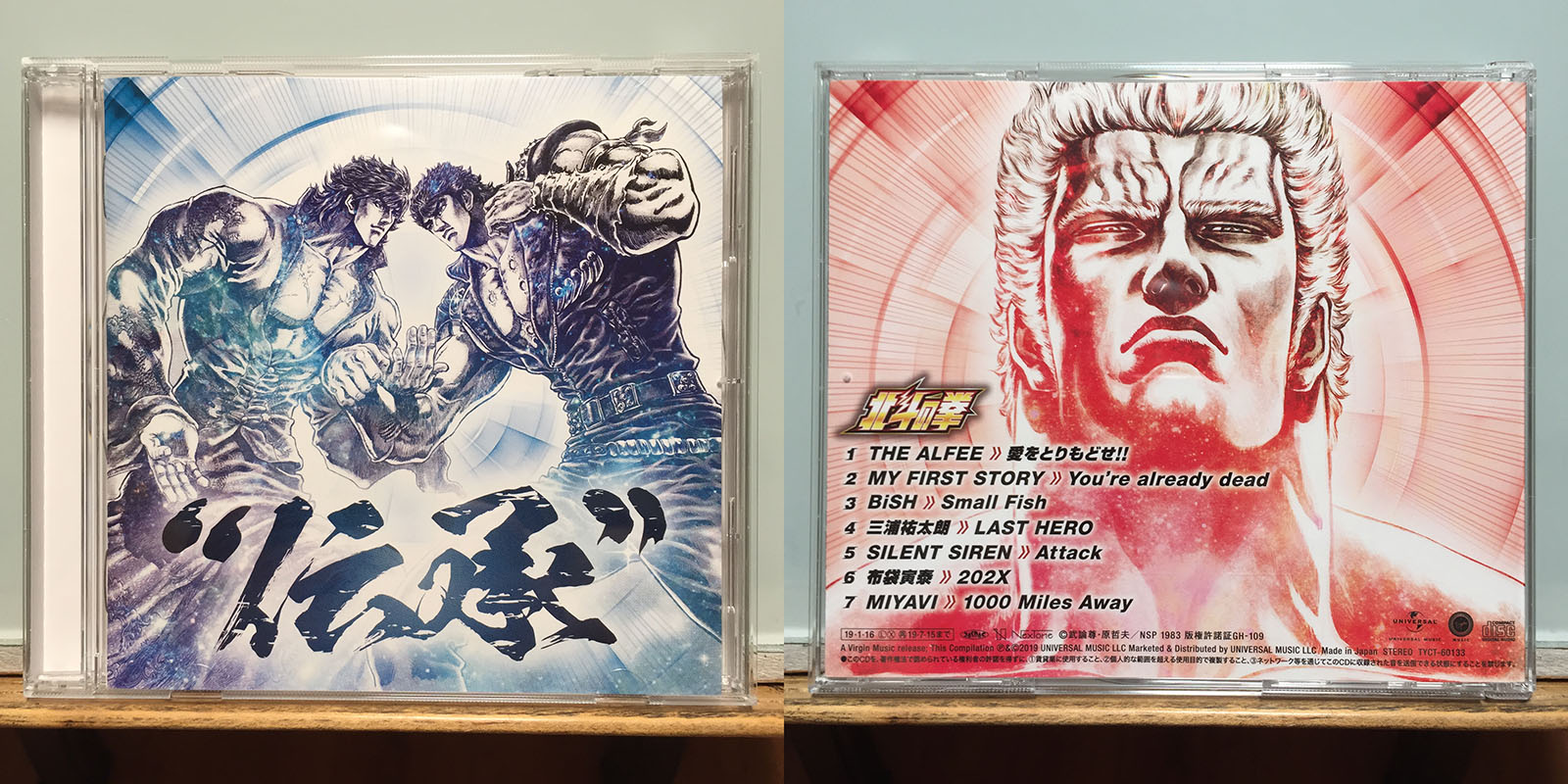 The most recent music release as of this writing, Legend is a collection of seven tribute songs. The only one from the original catalog is a VOLCANIC rock cover of Take Back the Love! by The Alfee. The others are all original compositions with relevant lyrics, some sung in English. Also includes Tomoyasu Hotei’s 202X.

Take Back the Love! by The Alfee

What do you do if you collect all the commercially-available music there is, but a handful of unreleased tracks still dangles out of reach? If you have some time on your hands, you hunt down and capture various instances of it in the show, then edit samples together with the hope of rendering a complete, clean version.

This is precisely what a few amazing fans have done, and they shared the results on Youtube. So now all you have to do is listen to them at these links: