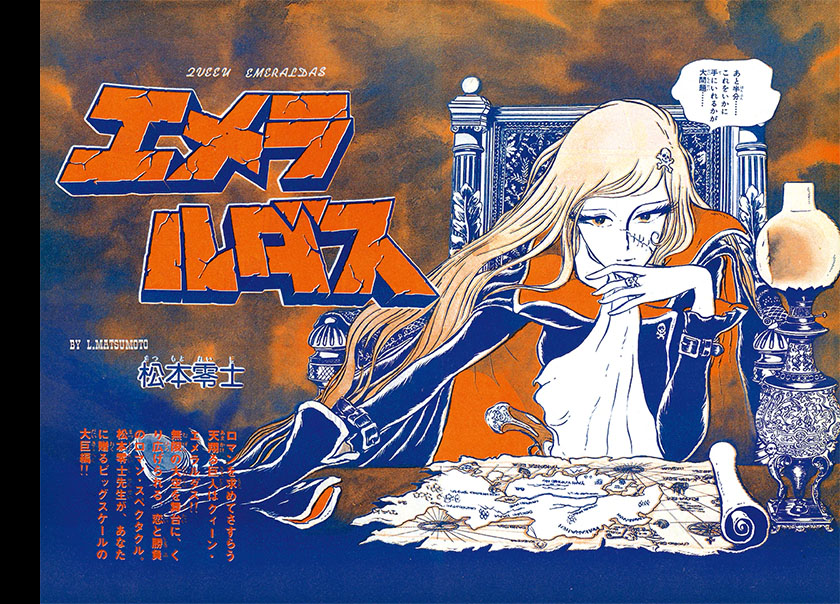 The blessing AND the curse of my comic book career was that sometimes I didn’t know what would happen next. Job security was always temporary; my editor at Malibu Comics would green-light a certain number of issues (usually 4 to 6) and I would be secure for the time it took to draw them. That time always seemed to be running out.

From my start in summer 1989 through the fall of 1990, I had a steady stream of Lensman, BROID, and Chaser Platoon comics to work on (see them in their respective articles). But the clock was always counting down to the end of that stream. One by one, they all dropped away; the last Lensman in July ’90, the last BROID in August, and the last Chaser Platoon in September. My schedule was planned out with precision (it has to be when you’re juggling multiple titles a month), so I knew exactly when I’d need something new to replace them.

That something was this project right here, Pirate Queen Emeraldas. She’s got quite a backstory, but I’ll keep it brief. 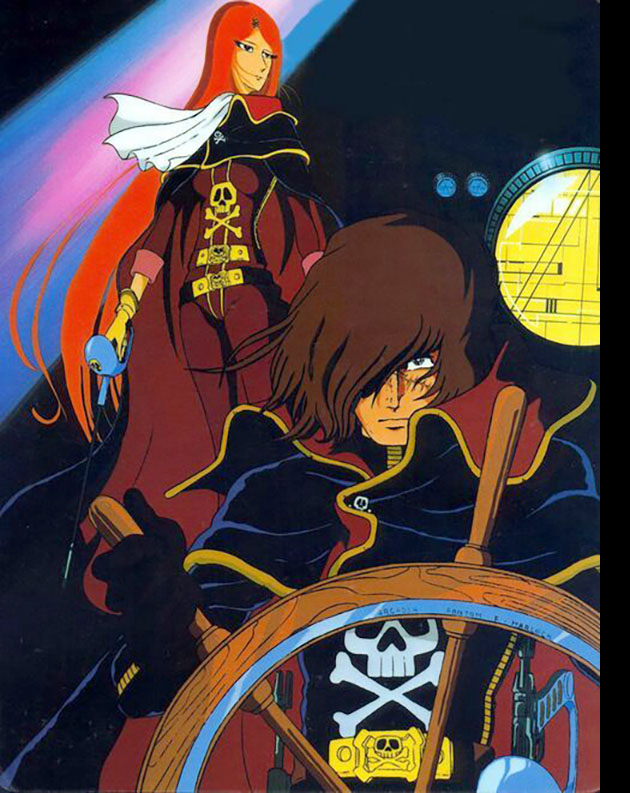 Her creator is a legendary manga artist named Leiji Matsumoto, born in 1938 and enshrined as a professional at the tender age of 15. He’s been going at it ever since, tapping nearly every genre and making it his life’s work to explore the tension between technology and humanity. I first became aware of him via Star Blazers (the US version of Space Battleship Yamato), which became a springboard to his other works. (Incidentally, I’ve translated a ton of Matsumoto interviews at Cosmo DNA and even scored one myself in 2010; you can find the entire tranche here.)

After Yamato, the next Matsumoto work most of us discovered was Space Pirate Captain Harlock, a character he invented in his high school days. Matsumoto experimented with Harlock for several years until bringing him to canonical form in a 1977 manga that made the jump to TV anime in 1978. Many more projects followed, the most recent being a CG feature film released in 2013.

Harlock is a strikingly iconic character. One look is all you need to be drawn into his world. A few attempts were made to import Harlock anime to the US, but they were all misfires in one way or another; a whole string of wrong place/wrong time scenarios. Despite this, enough of a fandom existed by the late 80s for Malibu’s Eternity imprint to take a chance on a Captain Harlock comic book series for American readers. At the prompting of their star artist Ben Dunn (creator of Ninja High School), they licensed the series from a company called New TV (later renamed Coral Pictures) and hired Ben to draw it. Ben pulled in his friend Robert Gibson to write it, and off they went.

Captain Harlock #1 was published in October 1989 to unexpected success, joining Robotech as a top-tier title for Eternity.

So where does Emeraldas fit in? She’s essentially the female counterpart to Harlock, introduced as his rival in a 1975 manga and an ally in subsequent stories. She got a manga of her own in 1978 and also transitioned to anime, most notably as a supporting character in Galaxy Express 999. 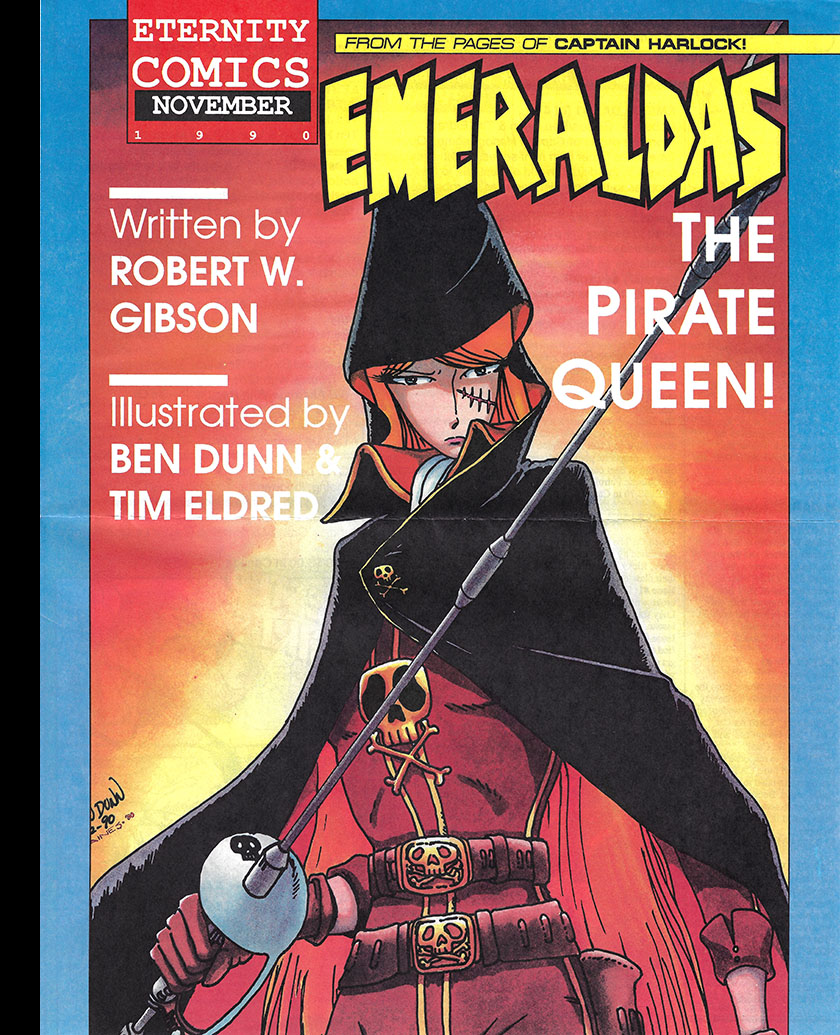 Whenever Eternity had a successful comic, they were always eager to spin it off into secondary titles. More comics meant more bang for their licensing dollar. So it was a natural for them to approve an Emeraldas miniseries by Dunn & Gibson.

I’d enjoyed their work from the start and bought every issue of Captain Harlock (see them all here). I thought it would have been fun to draw, but by the time it debuted I was already eyebrow-deep in Lensman and BROID. But as my various assignments dropped away in 1990, we were destined to meet.

My Malibu editor knew how hard I was working (I was pretty much the most productive artist in their entire stable), and as 1990 progressed, he advocated that I get onto a comic that was “actually going to make some money” (his words). I found it hard to argue with that, but when he brought up Robotech as an option I took a hard pass. I liked the anime it came from, but had nothing but contempt for how it was mutated for the English-speaking world. Agreeing to draw a Robotech comic seemed like surrender. But Captain Harlock was another thing altogether.

Ben Dunn had been losing steam around that time and started signalling his desire to exit. When the gig was offered to me, I gladly accepted. I can’t remember if a specific transition point was mentioned, but the first thing on the slate was the 4-issue Emeraldas series. It was being penciled by Ben and was to be inked by Pat Duke, but Pat had his hands full on the regular Harlock comics (now falling behind schedule) so I was asked to step in for him. I had inked a few of my own covers by that time, but never a full issue of a comic. I knew Ben was a steady hand, so I didn’t figure it would be that difficult.

Then the pages arrived in the mail. And, um…yikes. 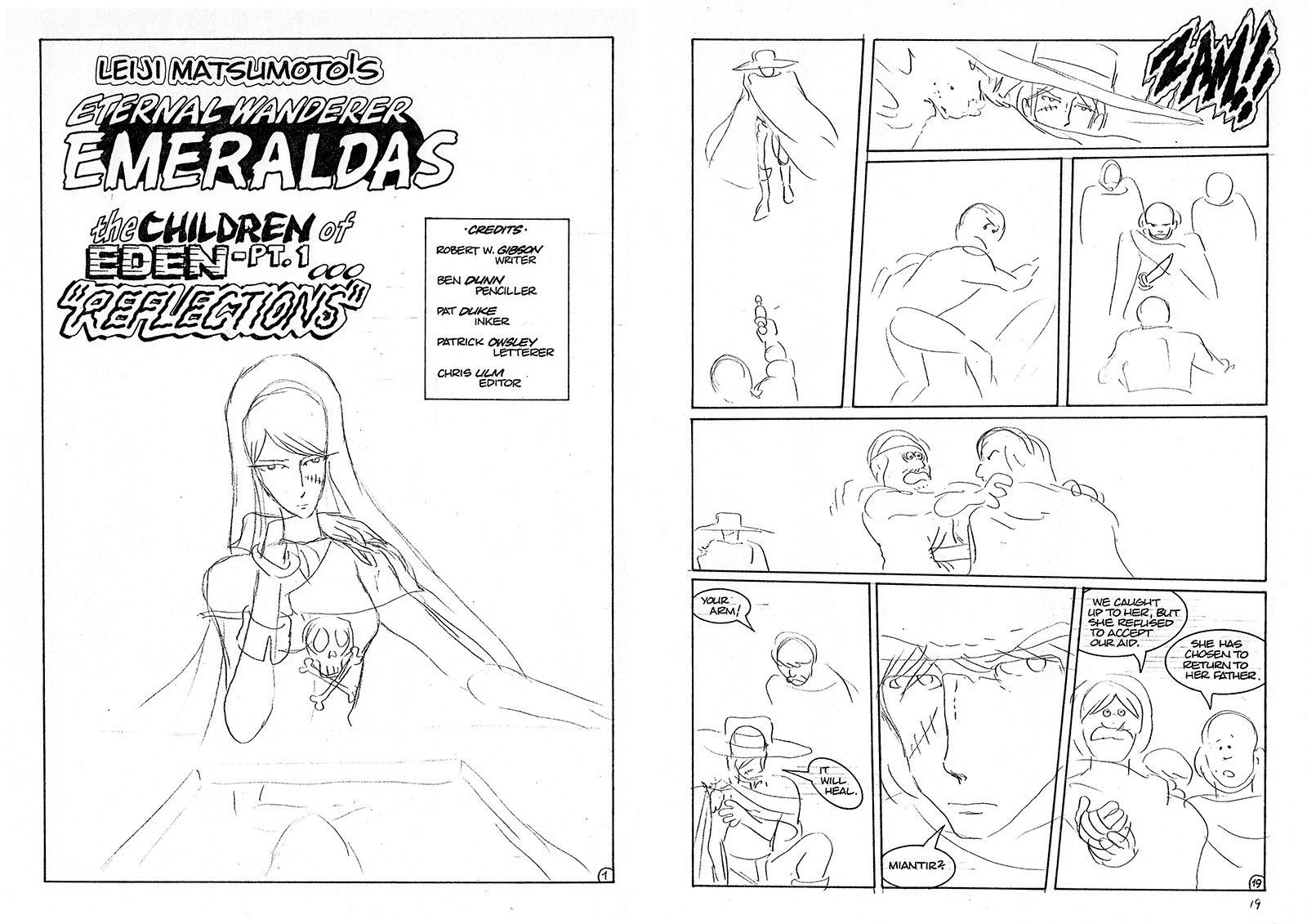 They weren’t even close to full pencils. More like a vague hint of what Ben had in mind. Extremely loose bodies with almost no backgrounds to speak of. I could figure out what he was going for, since he was mimicking Leiji Matsumoto’s techniques and I was quite familiar with them. The problem was that this had turned into more than a straight-up inking job. I’d have to build up those vague sketches into fully-penciled art before inking could begin.

I presented this scenario to the editor, and he agreed. I got a commensurate rate hike and production credit (“finished art” instead of just “inker”) and the adventure began. 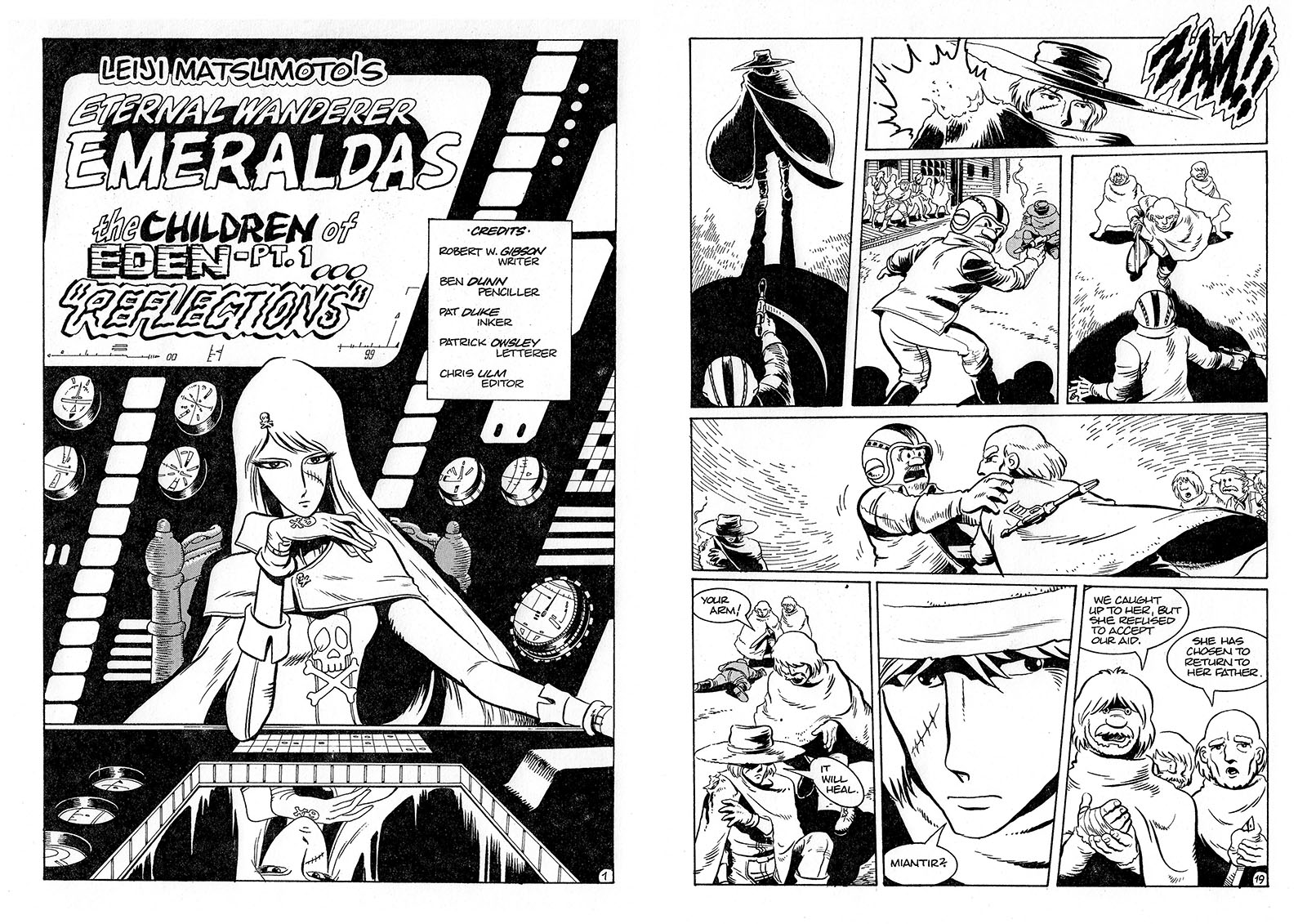 “Matsumoto style” dictated that I’d have to ink the characters with a brush, and I had very little brush experience to fall back on. So I just took it one panel at a time and started climbing the learning curve. I still wasn’t great at it after finishing the last issue, but I’d definitely made progress. I was lucky to get that experience on this specific project rather than something a lot more complex (like one of my own books), and it turned out to be exactly the right ramp-up for the regular Harlock series, which came immediately afterward.

We’ll get to all that in due time. For now, here are all four issues of Emeraldas, the best I could do with the materials I was given. 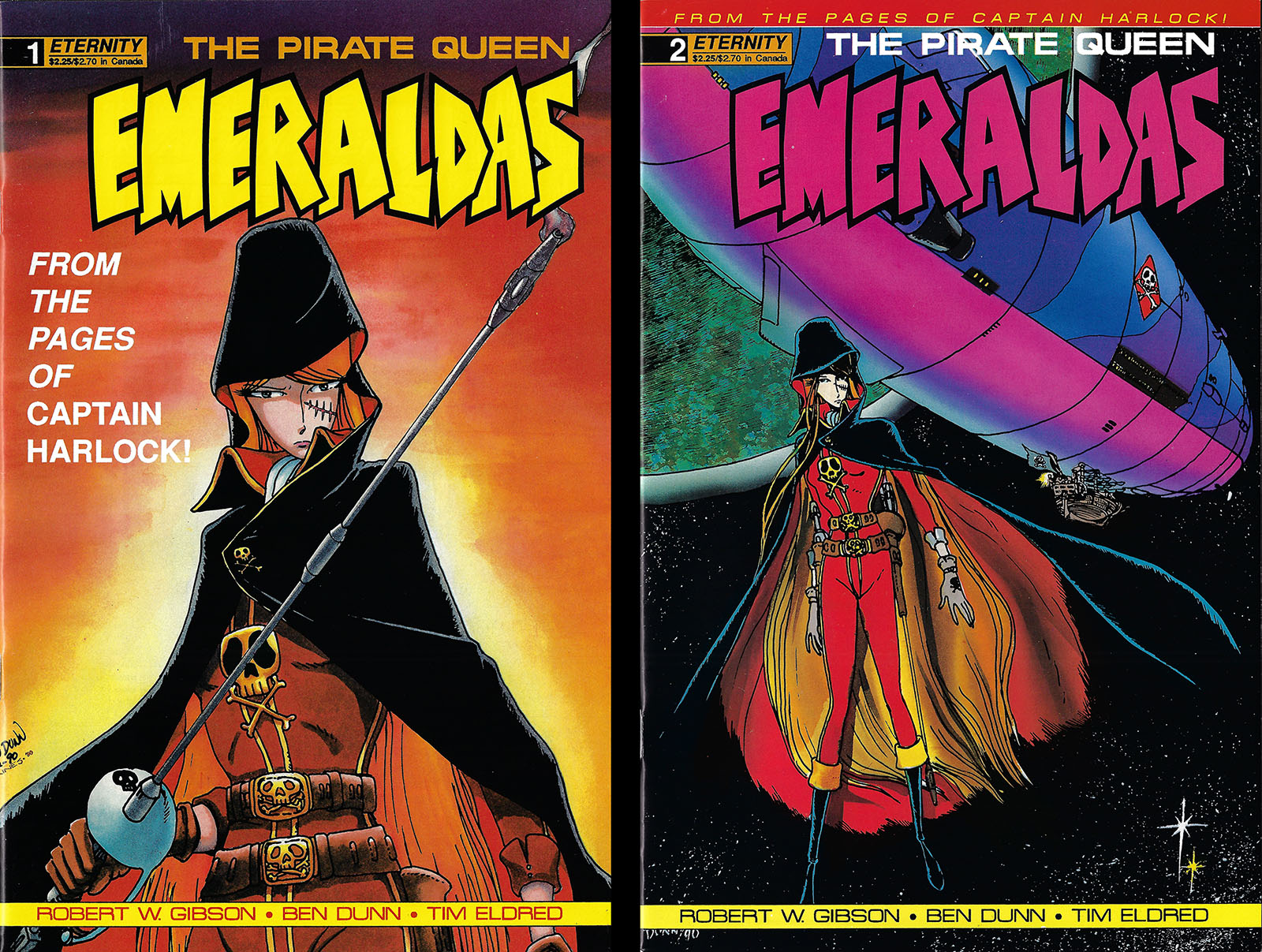 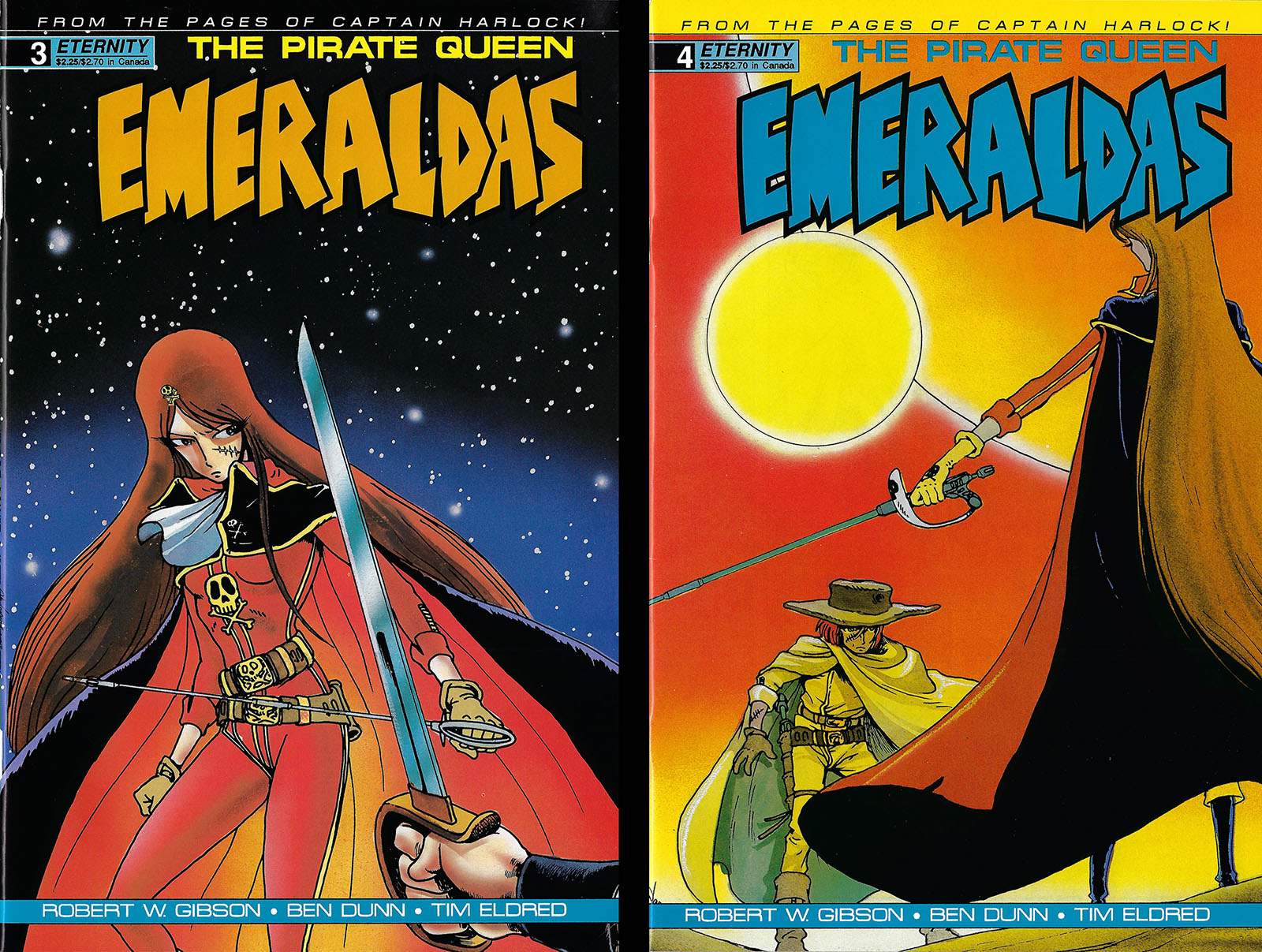